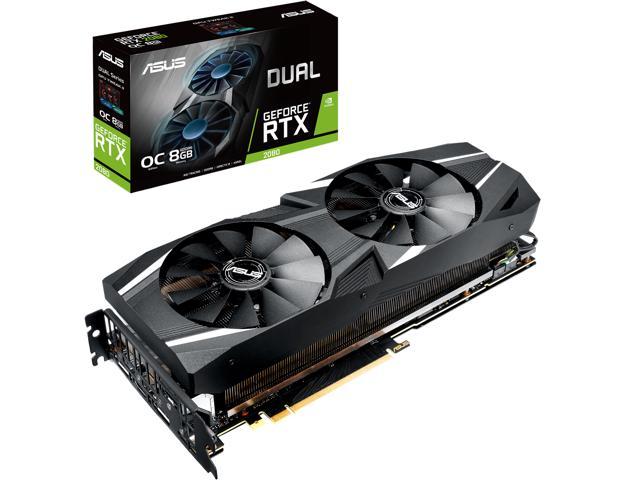 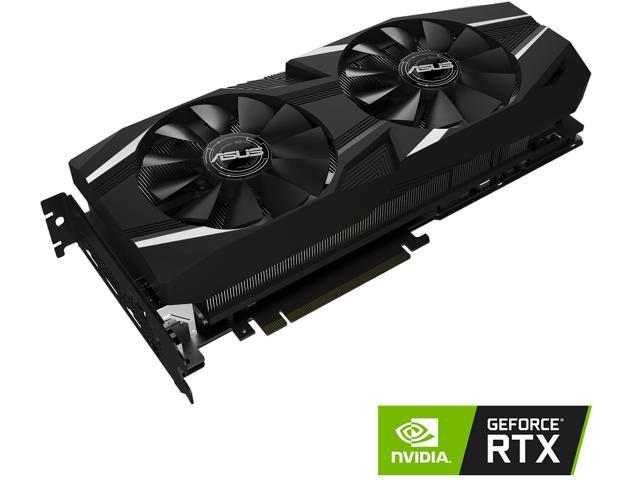 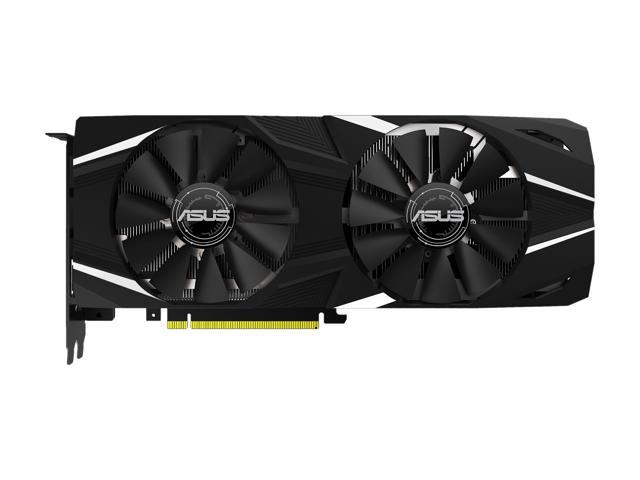 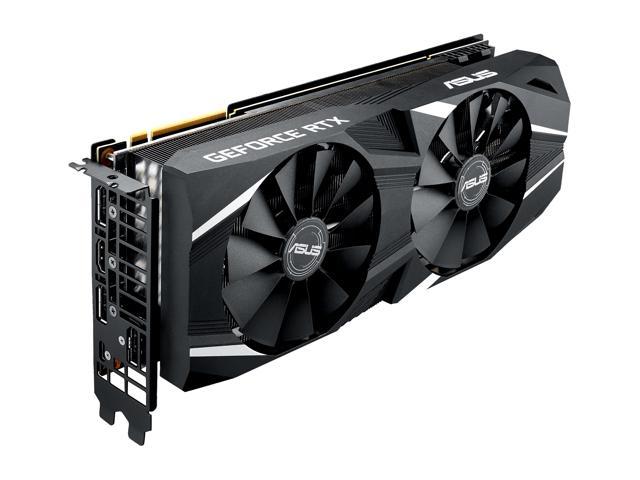 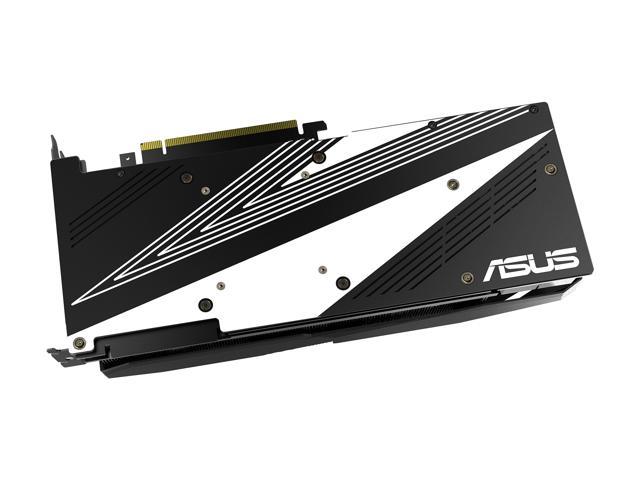 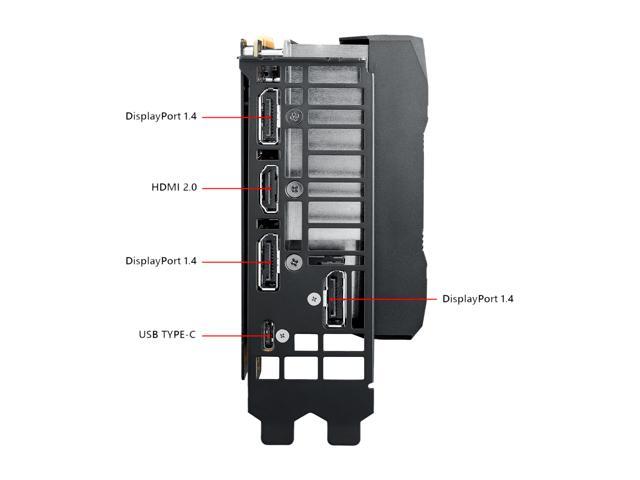 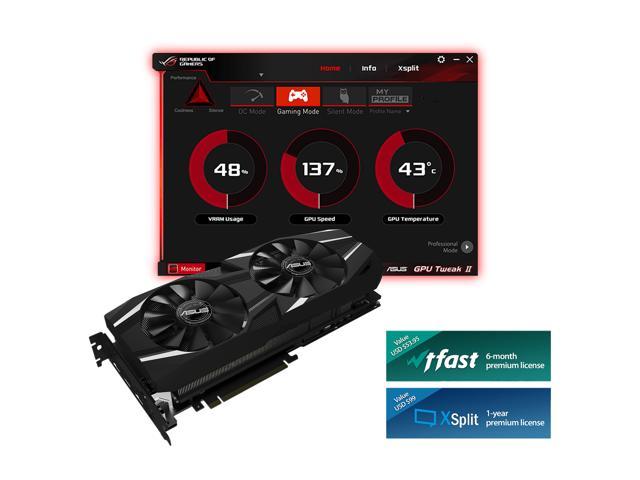 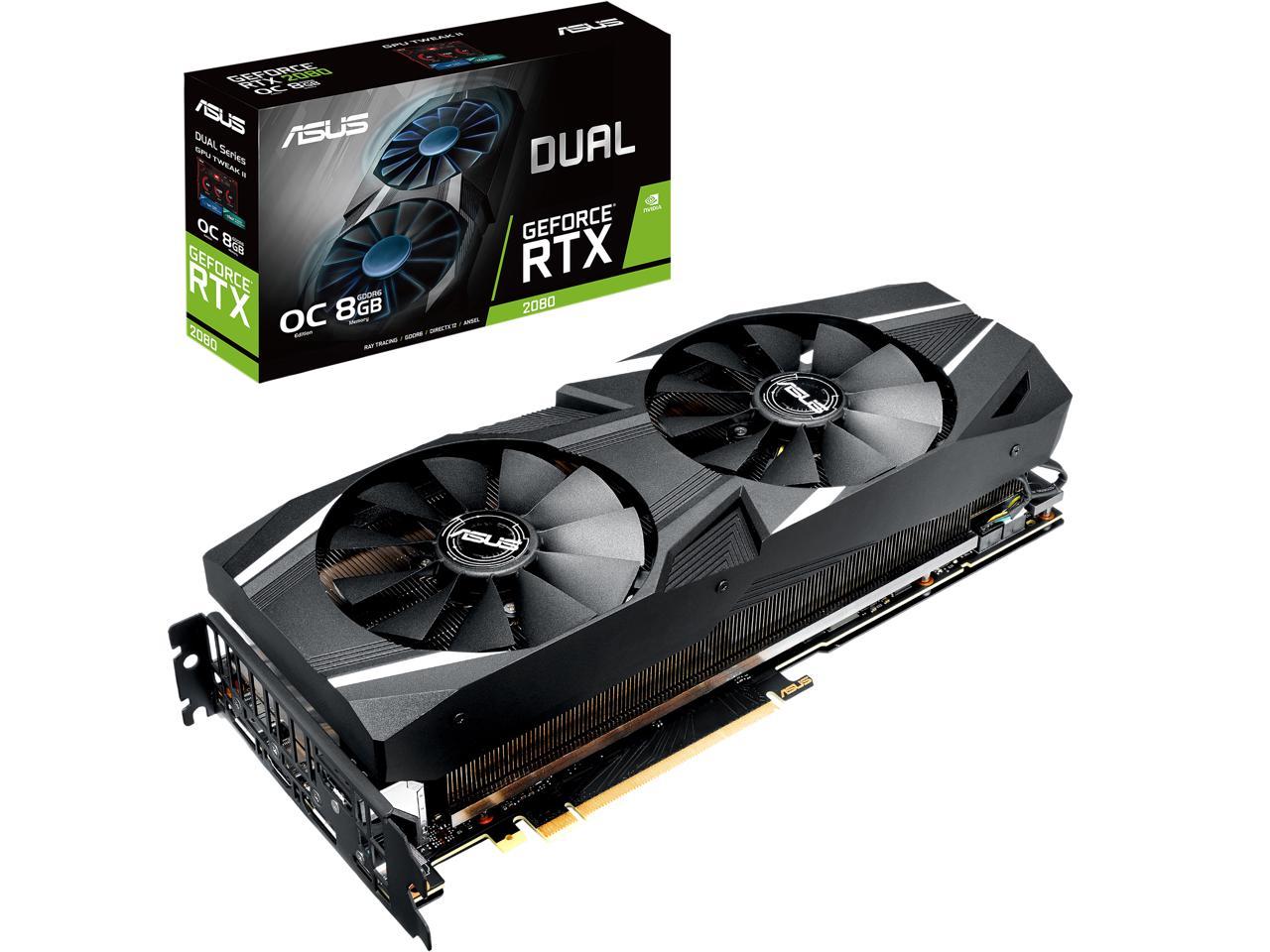 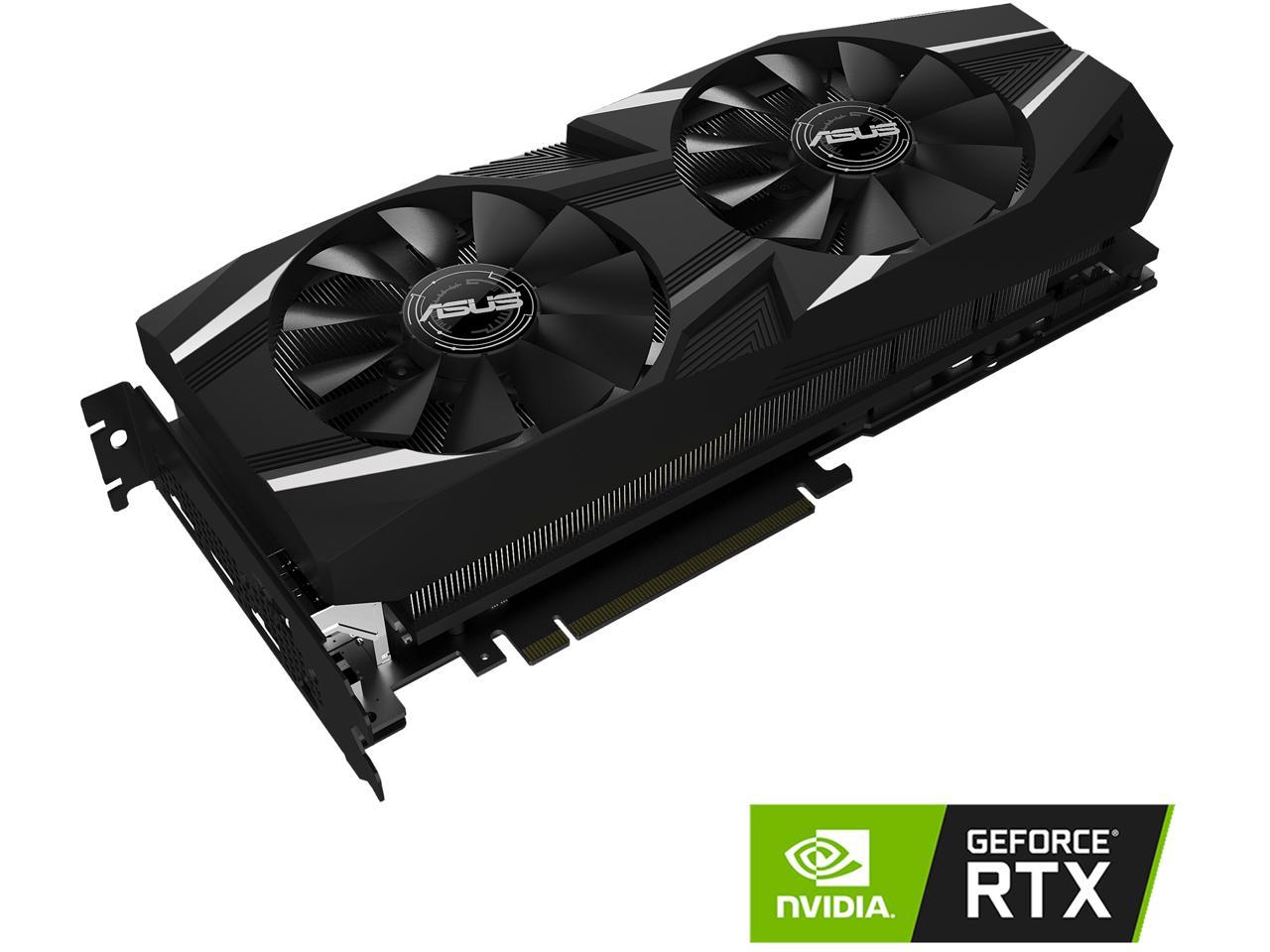 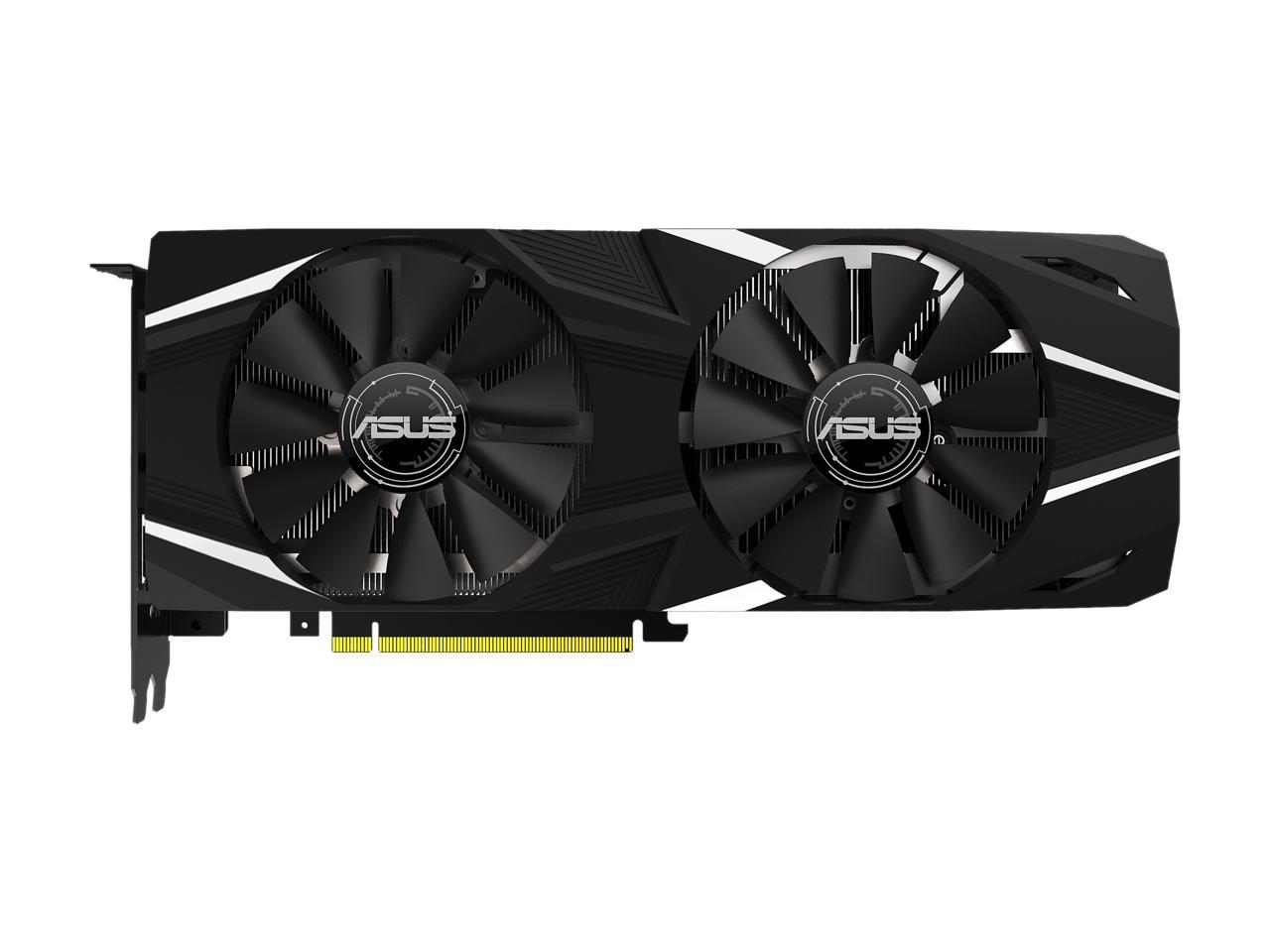 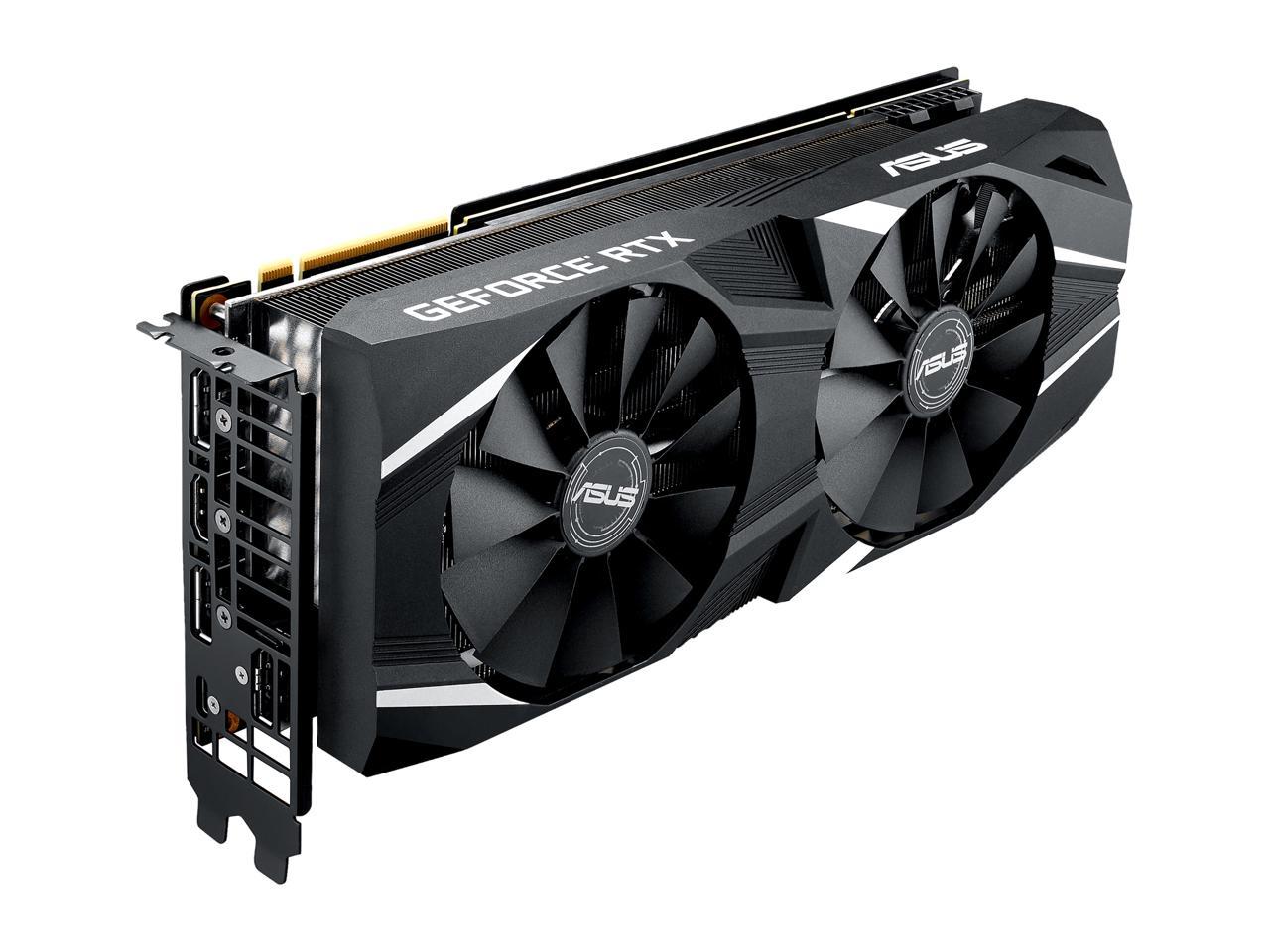 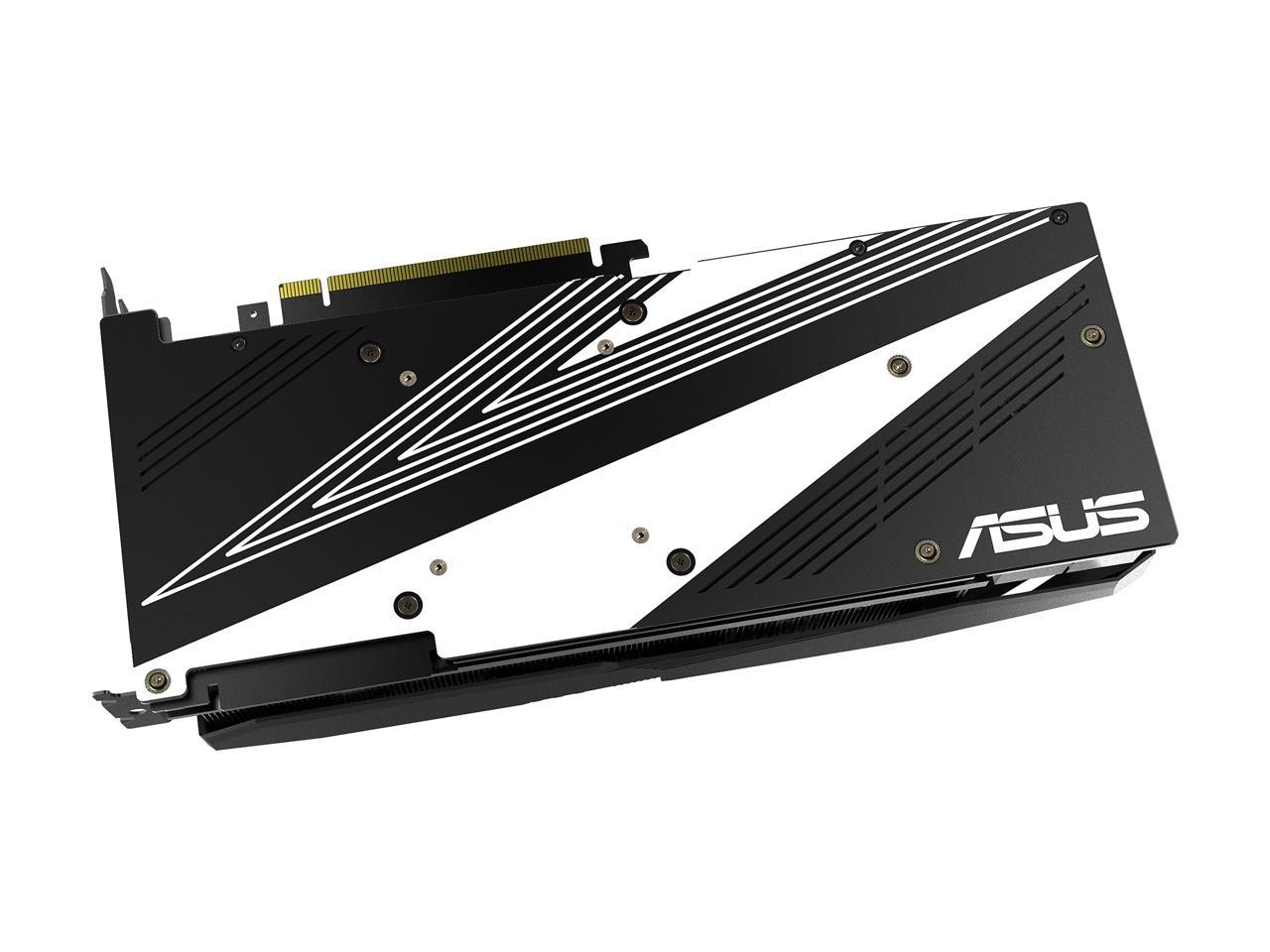 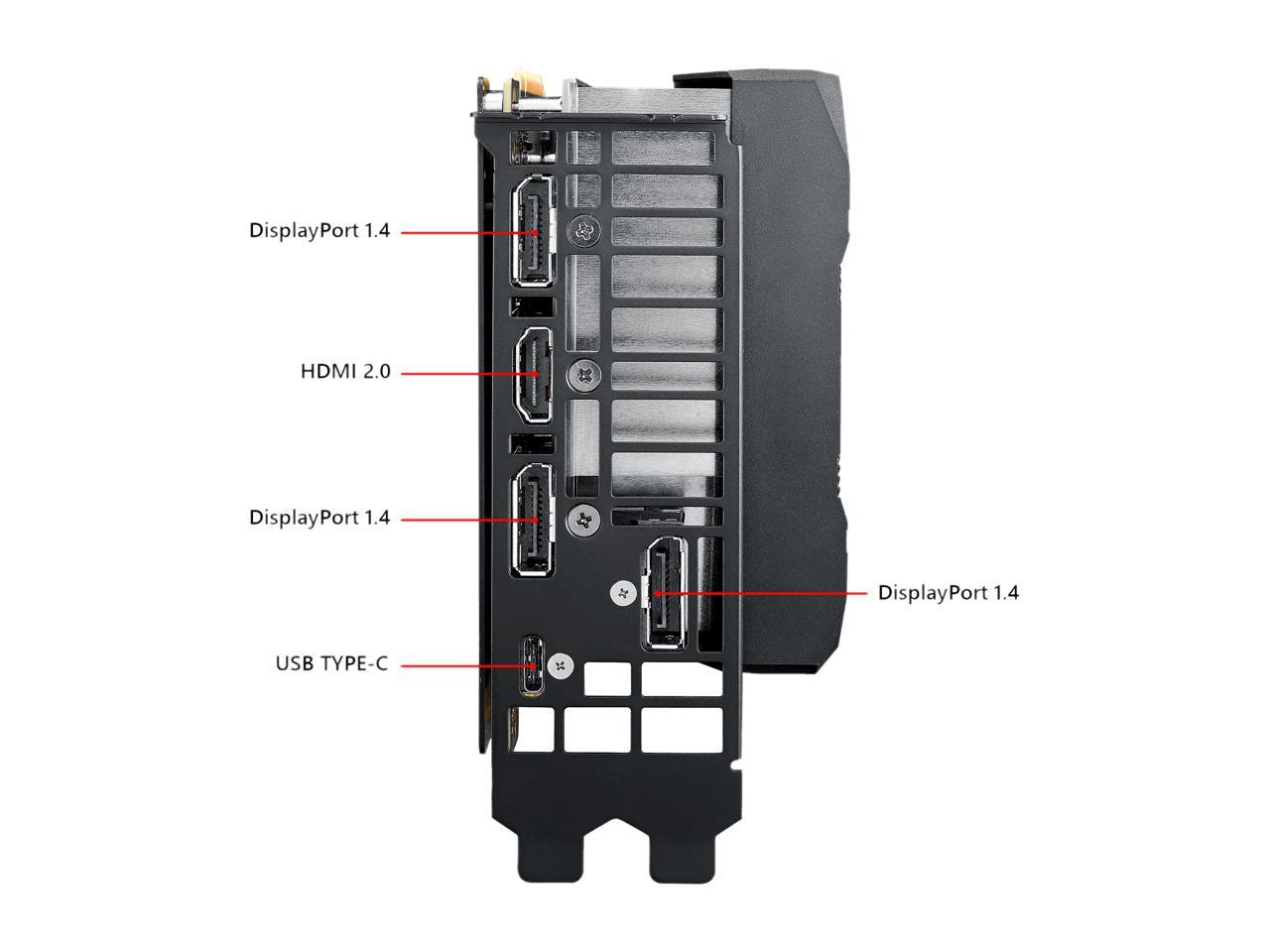 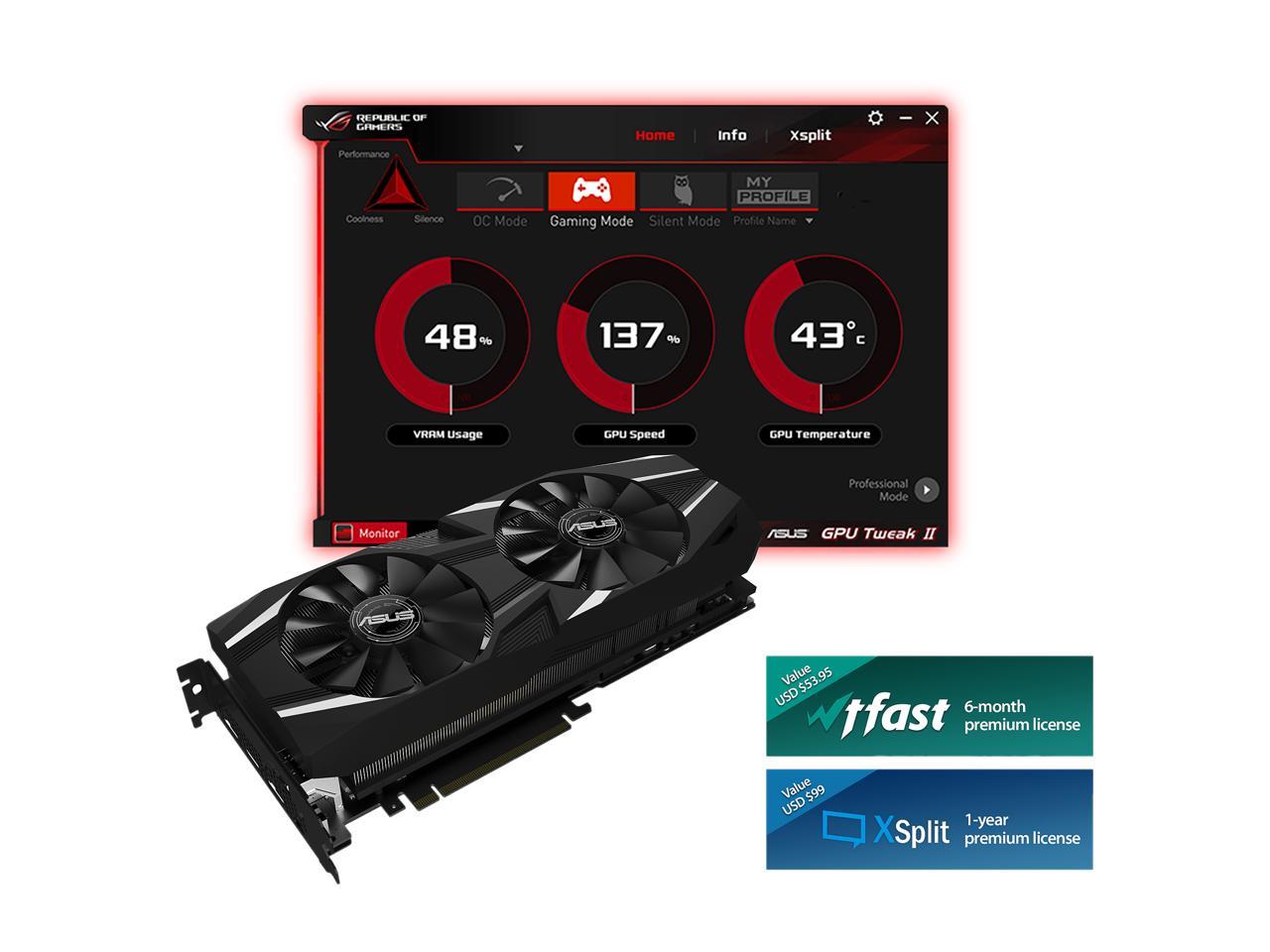 Learn more about the ASUS DUAL-RTX2080-O8G

Pros: I upgraded from a reference GTX 980 and the impact has been immediate. Every game I've thrown at this has played buttery smooth maxed out at 1440p, including titles like Shadow of the Tomb Raider, Ass Origins, Metro 2033/Last Light, and The Witcher 3. The card is ultra quiet, too, which makes gaming extra pleasant.

Cons: Temps are a bit above where I would like. Under load, I see the card hit 81 C, and idle is around 47 C. Not bad, all things considered (I had one of the Fermi cards back in the day, the 470, and that thing was the definition of hot at 101 C at times.... Yeesh), but it is higher than what many reviewers have found for other models, like the MSI tri X gaming 2080. That said, this card overclocks itself on the fly, so I won't complain too much (I see boost clocks hit 1865-1900 mhz often). Also, the lack of DLSS and Ray Tracing support in games at launch prevents this card from showing what it can really do. If you had a 1080 before, immediate performance gains net you only 30%ish for an 840 dollar premium, here. That may change when DLSS launches next month.

Overall Review: The ASUS Dual RTX 2080 is a powerful new card built on the promise of what lies ahead. DLSS and Ray Tracing offer a glimpse of that future, but at what cost? We have no way of knowing until the features launch sometime in October. Until then, this card is a highly recommended upgrade for anyone rocking a 9-series card or older. I know I am impressed.

Pros: Coming from a 980 ti this is a nice upgrade. Highest range of heat I got was 75 degrees C. Gaming mode clocks to 1800 using GPU tweak 2 Oc mode got it up to 1965.. while maintaining the above temps. Perfect for 1440p ... it’s quiet and it’s length is pretty standard if your worried about a small case. The heat sink is pretty thick especially me being use to my old 980 ti. Back plate is a nice addition. It has also been eating up all the games I have thrown at it with really good FPS ranging from low 90’s to mid 100’s with ultra settings and custom settings where only anti-aliasing adjustments were made. The performance was rather well with my HTC Vive headset.

Overall Review: I wanted the 2080 ti personally but just couldn’t pull the trigger. This card performs extremely well and satisfies me for now. I’m sure if this dlss is worth the hype this card will surpass the 1080 ti by a good margin then where it stands now..But for now time will tell. As far as for ray tracing it doesn’t interest me as of now I’m looking for performance and this card has it especially for older card holders like my self.

Cons: - Price, the biggest drawback to the 20 series cards is the sticker shock, but let's be honest if you are looking at the top tier cards 2080, 2080ti, and now RTX Titan you know you are going to pay out the nose for them. - The card is big so in smaller cases, it may have trouble maintaining cooler temps or even fitting. - The card could look nicer I mean I am not a huge RBG guy but an all black card with a white and black backplate is will boring and for the price, some consideration could have been put into that aspect though that is a minor thing. -Ray Tracing is the future but is a letdown, hopefully, with future driver updates and better software support it will be what NVIDIA envisions, but right now you will get around 30 FPS (assuming your machine can even turn it on CPU requirements). So the concept is cool and it looks great when it works you will notice a performance drop when you turn it on.

Overall Review: I don't know why so many people complain about how hot these cards run mine on normal load ie web browsing stays around 44C and even at full load during a 3DMark benchmark test at full loads it stays below 80C. I have a full ATX tower with three case fans, but I made sure the card has plenty of space nothing is in the PCIe slot below it. All that being said I recommend this card to anyone who wants to game in 4K or is looking for an insane performance increase over older generations. This card isn't perfect and the price is high but should DLSS and Ray Tracing iron out their issues and deliver on the potential the 20 series can be something very special. Even if Ray Tracing never fully takes off you are still getting huge performance increases in every aspect of gaming.

Pros: went right to 1950 hz with out overclocking temps were well with in acceptable limits

Cons: no rgb if thats what your into. my pc already looks like a discotheque so i didn't really care.

Overall Review: short card, fit in my fractal design meshify c case with lots of room for a front cpu cooler or etc.. im using a 8700k asus z370 rog code mobo evo 970 m.2 ssd corsair 750 watt psu 16 gb corsair ram 5 case fans if your not getting at least these specs, then maybe your system needs upgrading. im not even overclocking my cpu and gpu with these specs

Pros: Well-built design Quiet under light loads Doesn't flinch at all at 1080p and 2K gaming on high or ultra graphic settings Similar footprint as my previous card - 1070 Stays fairly cool under as heavy a load as I can put (At most getting to ~68 C after playing with fan curve) Might also have something to do with the 8 tower fans moving air but that's the temp coming from ASUS GPU Tweak II software so take that for what you will.

Cons: It's rather thick for a card, so don't expect to have [much] room for a second one. Lack of RT-enabled games make it a hard sell without a sale. Fan curve isn't adjustable without GPU Tweak II or similar software. Fans stop and go depending on what the temp detected is over or under the default 50C

Overall Review: I've had this card for a little over two weeks as of this review. Benchmarking has shown it to be a pretty good improvement over my 1070. I worked with my 1070 running Anthem on medium with plenty of frame dropping. Move to 2080, framerate stays comfortably at between 115 and 125 FPS on ultra. I did have to play around with the fan curve to keep the card cool without the stop and go of the temp threshold. Ended up just setting it to kick fans on at 45C and it keeps it cool during load instead of letting the temp build and having to catch up. Overall, I'm very satisfied with the card. Fair price (on sale) for what you get. Love the card. ASUS has never done wrong by me and have renewed that faith again with this card. 4/5 because of the thickness which would prevent good fan intake if there was anything sitting in the slot below it.

Overall Review: This graphics card takes up 3 slots, well it takes up 2, but it hangs so low its basically 3. The heat sink is MASSIVE, but it really helps keep down temp, running forza horizon 4, or BLOPS4 it rarely get over 60 and its overclocked a little. Fans rarely spin past 30% so its quiet.

Pros: It worked great for a little over 8 months... exactly what you expect from a RTX 2080.

Cons: After less than year I come home from work to find it stone dead, no signal no anything. One warranty claim later and I get another unit that is DOA. By the time I get that one sent back and another one in exchange I will have been without a card for over a month. An 8 to 1 ratio of months working to not for an $800 part is unacceptable.

Manufacturer Response:
Dear Preston, Thank you for taking your time in writing this review and sharing your experience. We certainly value your feedback. It is unfortunate to hear that your video card is no longer working even after a warranty claim. What is the RMA # ? Sorry for the inconvenience this caused you. I would like to gather more information to better assist you. Feel free to contact me at cl-justin@asus.com and I will help you to the best of my abilities. I'm here to assist our customers with our products and dedicated in bringing a resolution to all issues that they may come across. Your case for reference is #N190618317 Thanks for choosing ASUS Regards, Justin ASUS Customer Loyalty