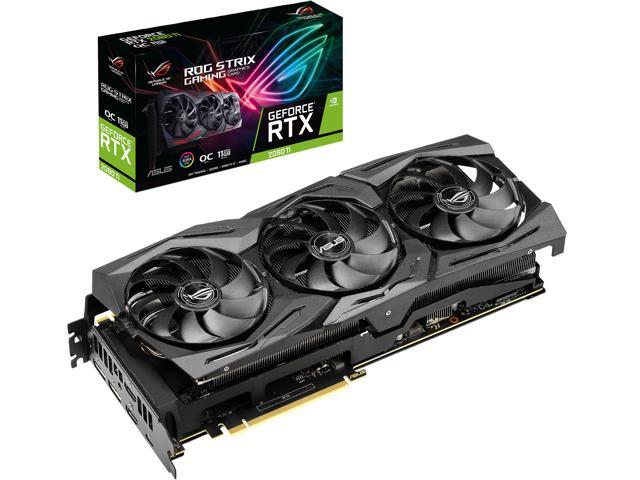 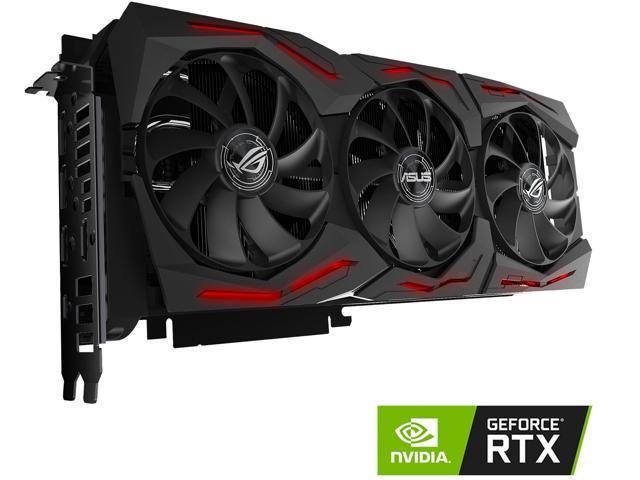 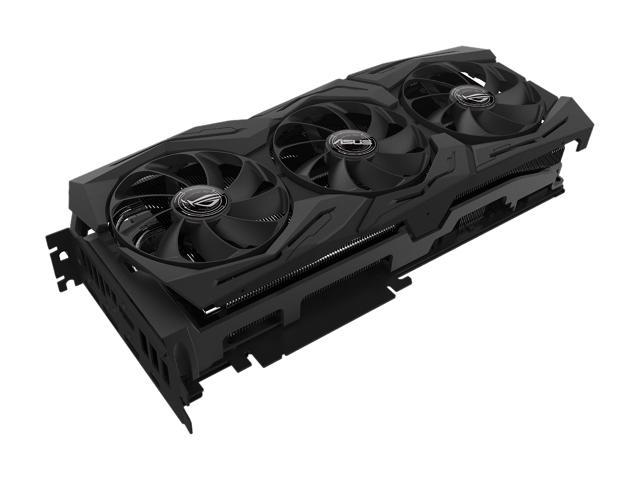 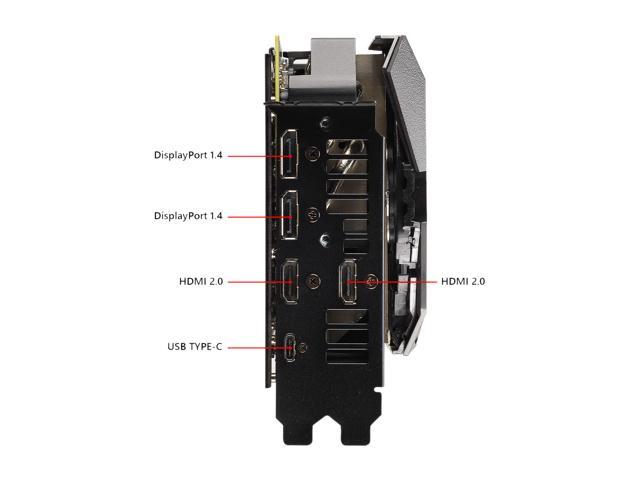 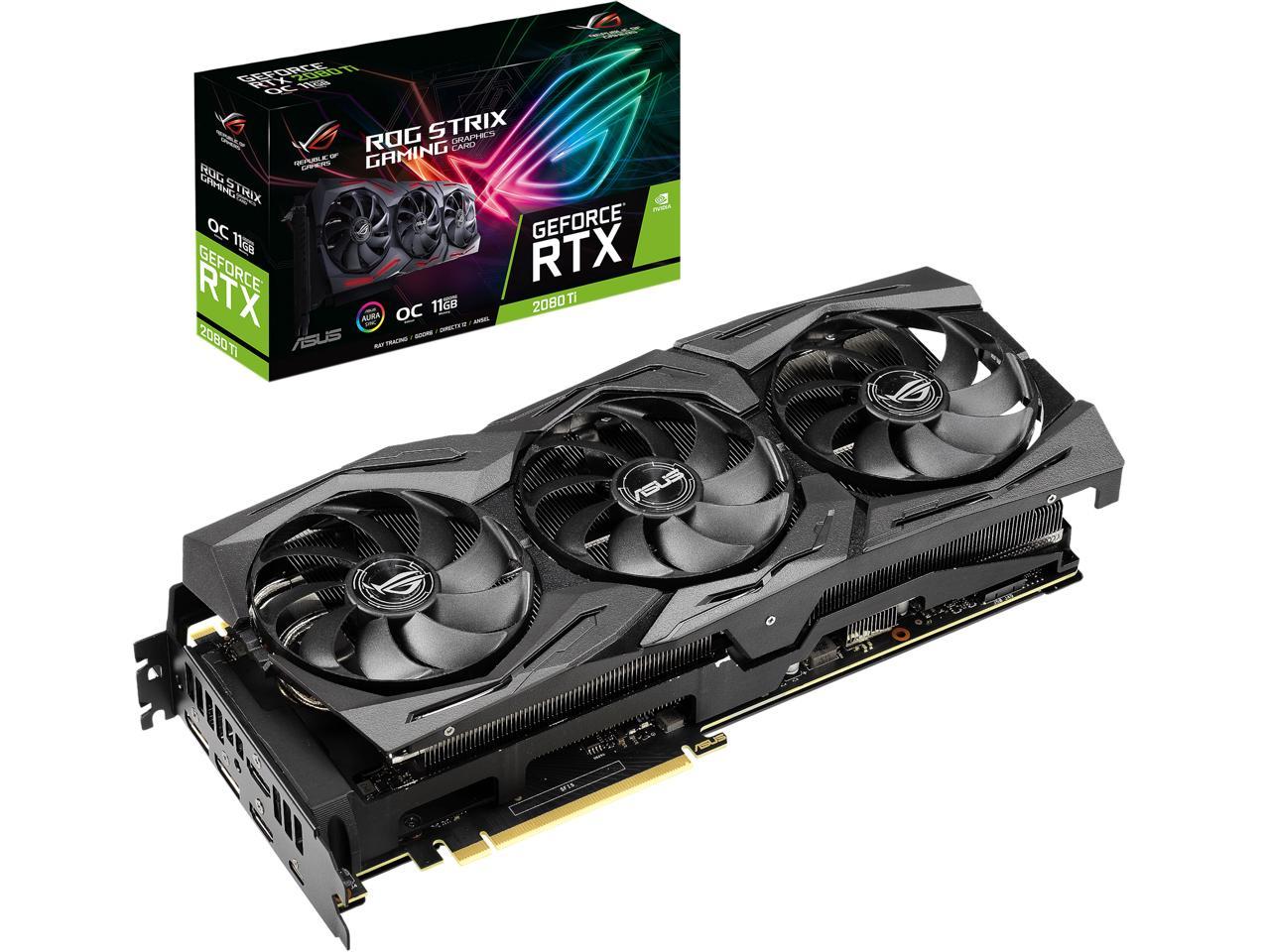 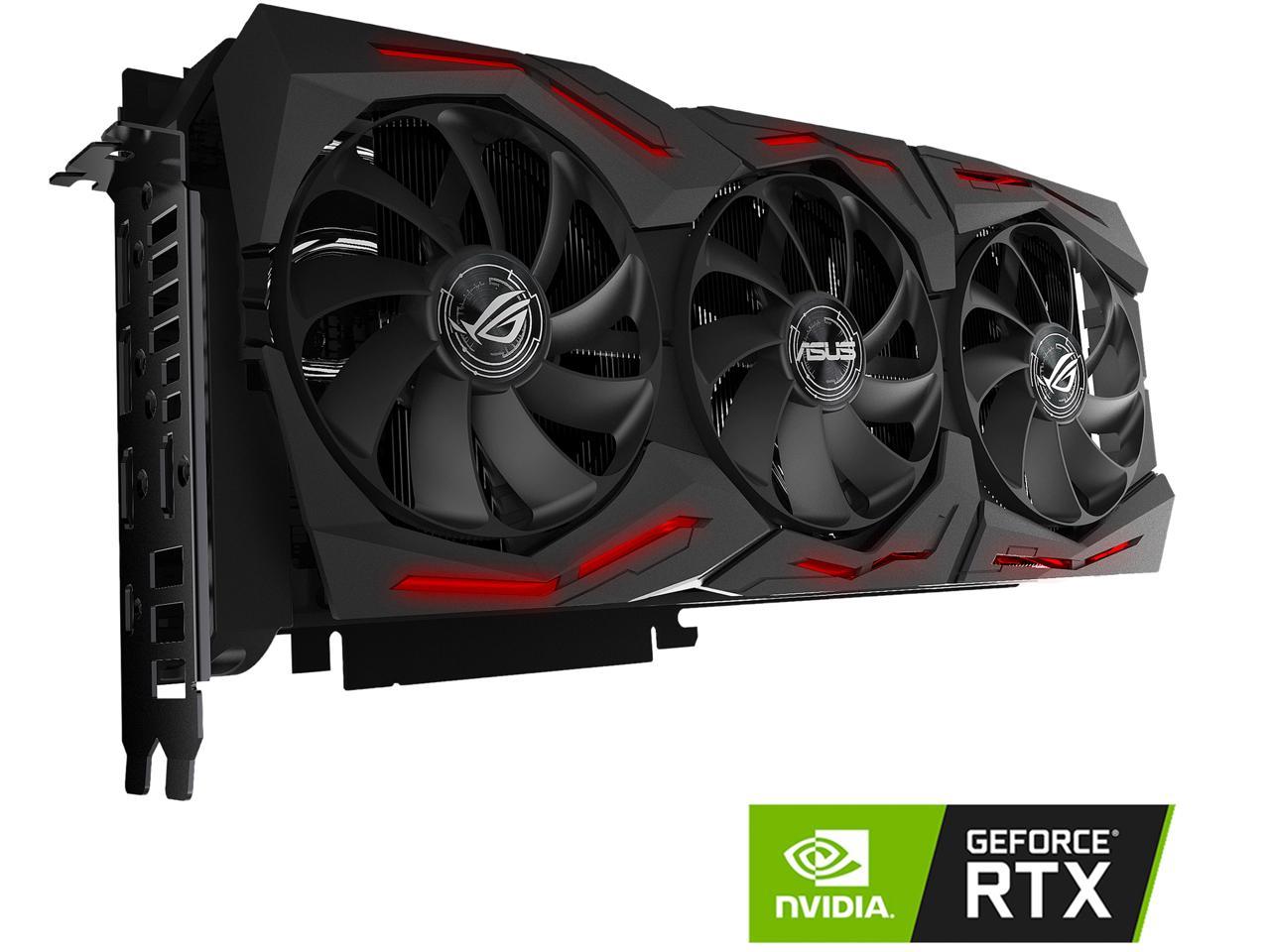 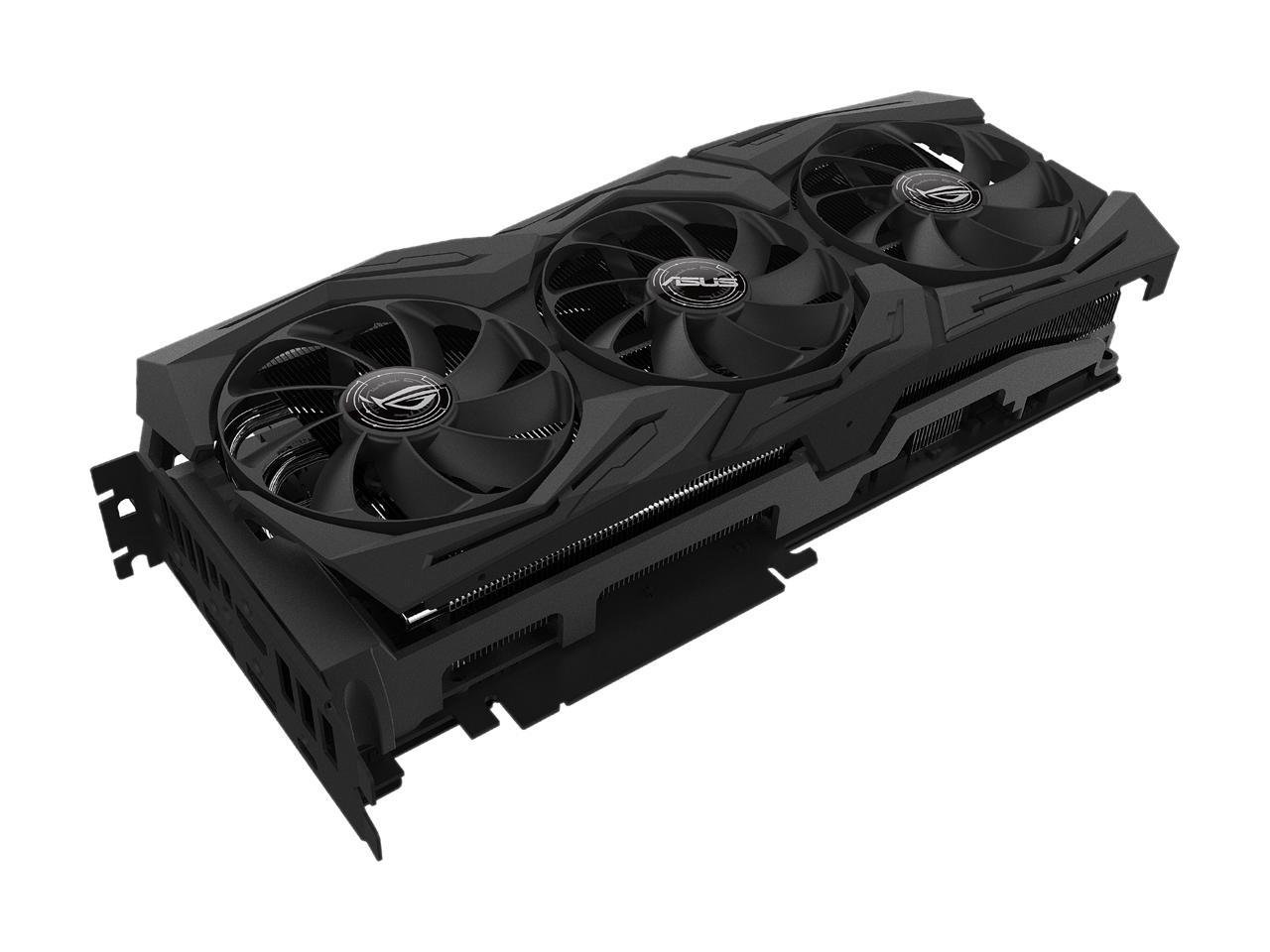 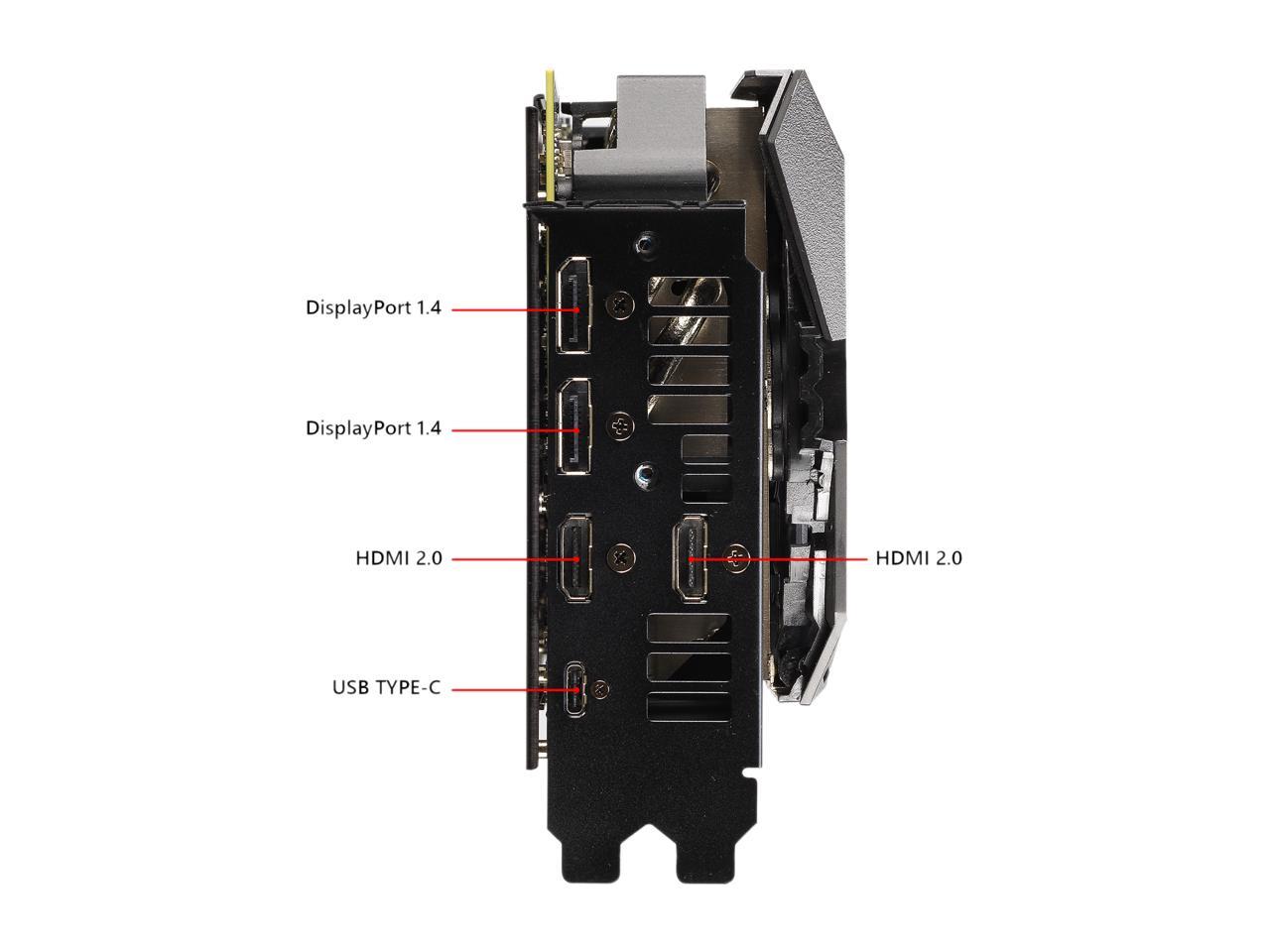 Learn more about the ASUS ROG-STRIX-RTX2080TI-O11G-GAMING

Pros: If you are into gaming, which I assume you are, this card will take literally any game you throw at it at 1080p. If you want to run 4k 60fps, you will need to tune down some settings. For example, if you want a more smooth 4k 60fps gameplay experience in gta v, you may want to tune down some aliasing and particles settings. For less demanding games, feel free to max out everything. In terms of ray tracing, I tried it with BF V. It honestly feels the same with or without it at this time. But RTX is still in its infancy. I'm sure it will get better as we get more updates and more games that support it. The thermal on this card is pretty good too. I think I've hit maybe 75C - 78C on high load. RGB was easily synced with ASUS ROG MAXIMUS XI HERO motherboard.

Cons: The card died after about a week of use. It started with some weird graphical glitches in the game that was not noticeable at first. Weird sound coming from headphone. Then it involved into crashing in mid games. I remember running furmark on this card before and it had no issues. However, after several crashes, I tried furmark again and the benchmark would just crash within a few seconds. The price is quite high for this card but it is one of the best 2080 ti out there, if not the best.

Overall Review: I saw a lot of news about 2080 ti before I purchased this card so I knew there was a probable high chance I could be getting a defective unit. And I can definitely agree with GN that the thermal was not an issue here since the benchmark would crash before it can reach any extreme temperatures. I also tried downclocking and switching monitors but none seemed to have worked. I contacted ASUS about the card and wanted to see if they can provide any new vbios. Unfortunately they were not able to. So I ended up RMA the card. The RMA process was relatively smooth with one hiccup. I requested the RMA to be placed on hold if the card was not in stock. However, it seems like they either forgot about it or simply couldn't do a hold. But I did receive full refund for the purchase which is nice. The vbios I had was 90.02.0B.40.AS04. It's possible it was a hardware issue but I'm just throwing it out there. I'm going to try to get another strix 2080 ti before I change my mind on this. I'm hoping that the next batch of card will be better.

Manufacturer Response:
Dear Valued Customer, ​ Hello, thank you for taking your time in writing this review. We certainly value your feedback. It is unfortunate to hear that your video card is having performance issues and stopped working after a week of use. Are your drivers up to date and are you overclocking? It looks like you were in the process of an RMA, but due to limited stock, you were refunded instead. Sorry for the inconvenience this caused you. If you have any questions or concerns, you can contact me at cl-justin@asus.com or you can speak to an ASUS live support agent 24/7 at http://bit.ly/AsusLiveChat. I'm here to assist our customers with our products and dedicated in bringing a resolution to all issues that they may come across. Your case for reference is N190106124 Thanks for choosing ASUS Regards, Justin ASUS Customer Loyalty
Anonymous
Ownership: 1 week to 1 month
Verified Owner
Great performance, at a cost11/11/2018 11:34:46 AM

Pros: Can not push this card to exceed 65c. Granted, it is cold here yet the cooler is remarkable, this is my first GPU to routinely idle in the high 20's. If you have an AIO on your CPU, the noise from the GPU will blend in with your case fans, only at very high fan speed does it become audible, in my case at least. It will stay just above 2GHz under load, the cooler it is, the higher it goes above 2GHz. My card peaks at 2160 MHz but continuously it can't hold past 2.1 GHz.

Cons: -All of the 3rd party GPU utilities lack in area or another. To perfectly adjust the settings and appearance, one would have to mix and match between 3 different apps. -Docking a point for the price. Above MSRP gouging needs to stop.

Overall Review: At this price point, this card will be obsolete long before it becomes affordable or starts offering value to anyone, even on a sizable budget.

Pros: - More frames than real life. - Will make you feel better about being in quarantine. - Averaging over 150FPS-200FPS in 1440P - Does not ask you 'how you are feeling' or 'what you are thinking and other girlfriend verbiage.

Cons: - The cost of being in quarantine with this card might make you think about risking social interaction. - Is not your girlfriend. - Can't cuddle at night without risk of electric shock.

Overall Review: - Would recommend if you value good looking things. RGB is there for extra visual spice. - Might not be a real woman but will treat you just right.

Pros: Runs cool & there are no other alarming issues.

Cons: It has made me a whiner.

Manufacturer Response:
Dear Ethan, It is unfortunate that you are experiencing loud coil whine on your card. It is recommended that individuals with sensitive ears have their graphics card installed in a closed chassis, and keeping it some distance. Also, you may want to check if it's your power supply since that can cause of the whine as well. Let me know if this helps. If you have any questions or concerns, feel free to contact me at cl-justin@asus.com, or you can speak to an ASUS live support agent 24/7 at http://bit.ly/AsusLiveChat. I'm here to assist our customers with our products and dedicated in bringing a resolution to all issues that they may come across. Your case for reference is N190754886 Thanks for choosing ASUS Regards, Justin ASUS Customer Loyalty
Brad L.
Ownership: 1 week to 1 month
Verified Owner
Nonexistent quality control7/17/2019 8:29:40 PM

Cons: I got 2 of these cards and on both of them, 2 of the 3 fans made a scratching noise (bad bearing). Asus GPU Tweak is bug-infested to the point where it's unusable. The fan control graph UI for the middle fan is broken. And none of my settings are remembered. The fans rev themselves every second unless I set them to minimum 30%. It sounds like a washing machine.

Overall Review: Look at how many of the Open Box 2080 Ti's on Newegg are THIS CARD. This is an unfinished product that should have never left the factory.

Manufacturer Response:
Dear Brad, It is unfortunate that both of your cards have bearing issues. Can you send me a video of the noise? Also, do you have the latest version of GPU Tweak installed, and are you running it on Administrator? Please contact me at cl-justin@asus.com so I can further investigate your case. I'm here to assist our customers with our products and dedicated in bringing a resolution to all issues that they may come across. Your case for reference is N190762599 Thanks for choosing ASUS Regards, Justin ASUS Customer Loyalty
Anonymous
Ownership: 1 week to 1 month
Verified Owner
Can handle everything on Ultra1/16/2019 9:31:10 AM

Pros: -Very fast. Runs 2 1440P 165Hz monitors, with 1 being the gaming monitor. Everything is on Ultra for all games. -Quiet Fans -Easy RMA process from Newegg.

Cons: -First card i got had very loud buzzing/coil whine when put under load. Was so bad that had to RMA. -Second card has no cons.

Overall Review: The RTX series has been plagued by bad cards so it may take more than 1 try to get a good card.

Cons: Expensive performance gain from GTX 1080 TI. 10 - 20 FPS gain depend on the game but nothing crazy. Not a lot of games support ray tracing at the moment. 300W+ energy draw under full load...

Overall Review: "Coil whine" high pitch noise from the capacitors were driving me nuts. (even at idle) I was about to RMA this card but I then swapped the 6+2 pin connector ports just for haha, the whine magically stopped completely.... The only thing that is different is that one of the 6+2 connectors is from the PSU directly, one is from the PSU modular port. Still can't believe swapping the connectors fixed the issue, but lol I don't have to deal with RMA now.

Pros: - Paired with Intel I9-9900K and GSkill Trident Z Royal (2x16GB) - Handles every game I throw at it on Ultra settings out of the box - Highest temp reached was 61 degrees Celsius out of the box (Average is low 50s) - I haven't even needed to custom overclock or water cool yet because there would be no point

Cons: - It is big and I put it in a Lian Li 011 Dynamic with no problem so make sure you have a big case - No sagging yet but maybe in the future it will start to sag just because it is so big/heavy

Overall Review: - If you want to be able to do anything with your computer and play real life Minecraft then this is for you