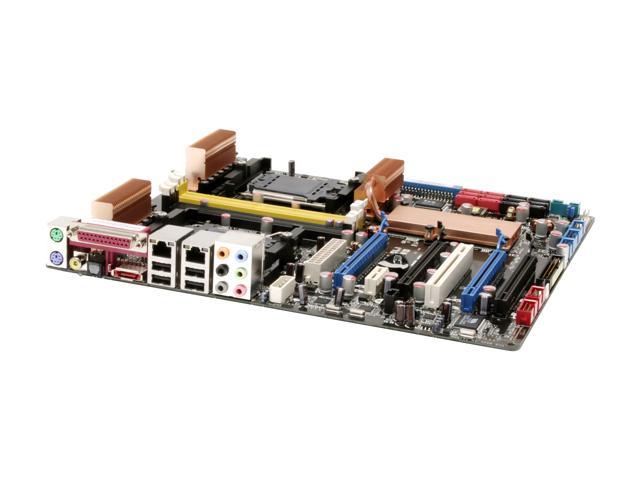 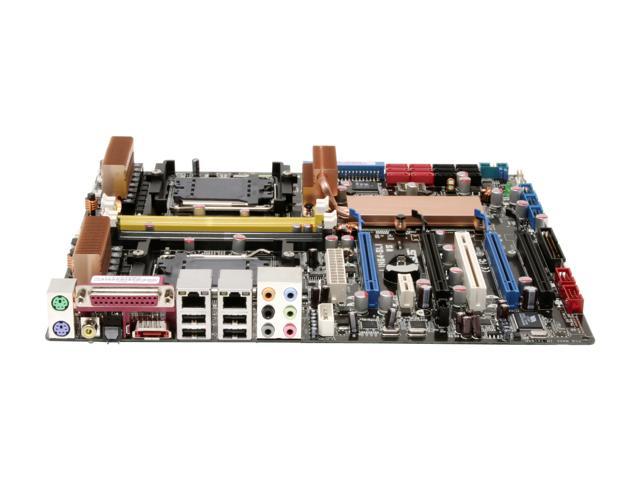 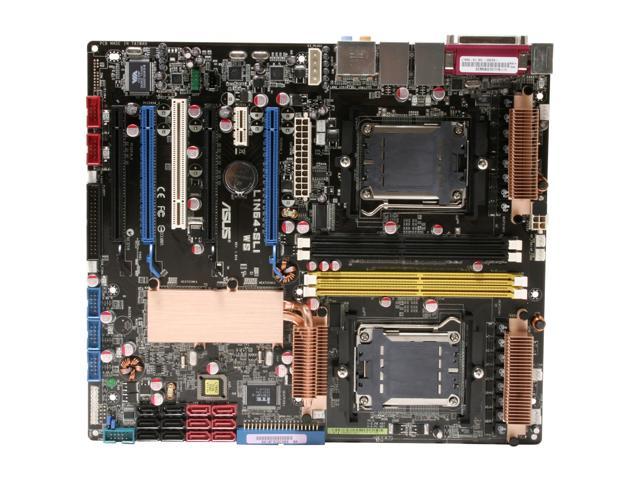 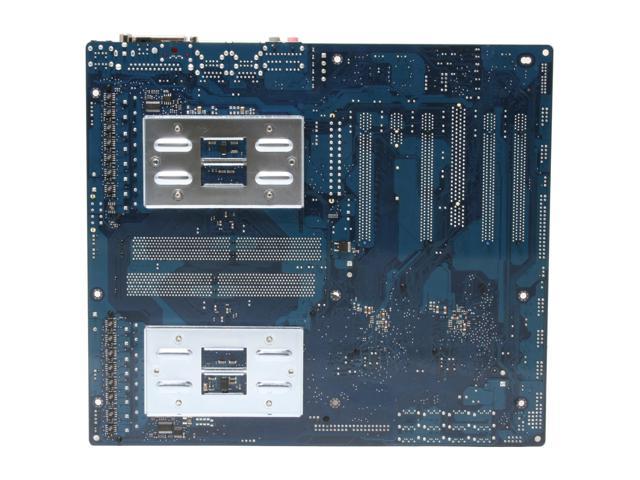 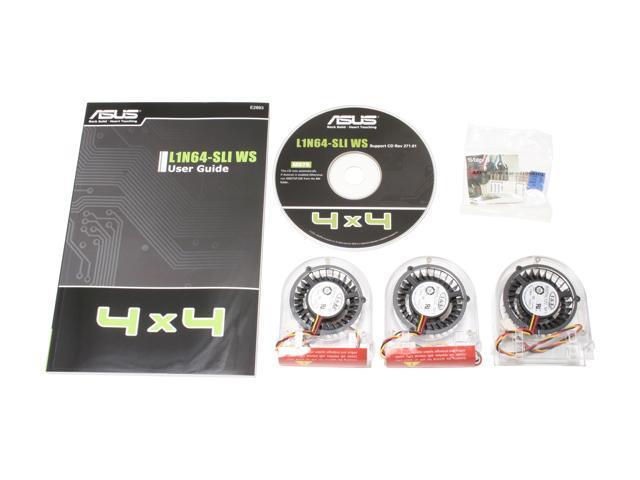 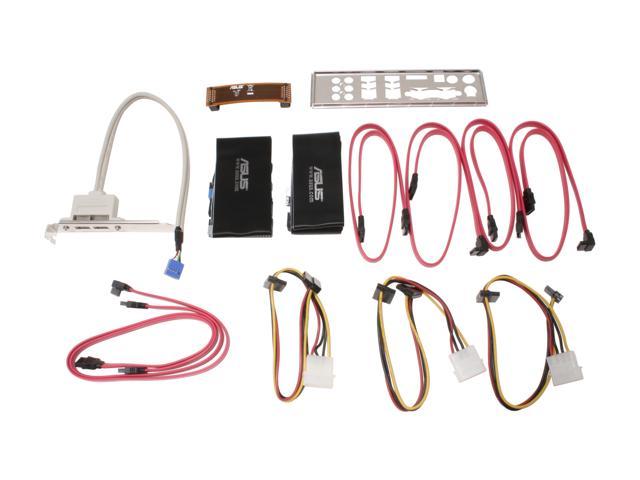 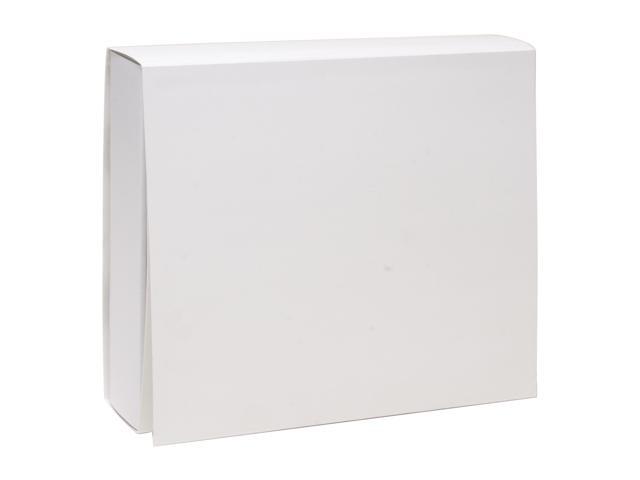 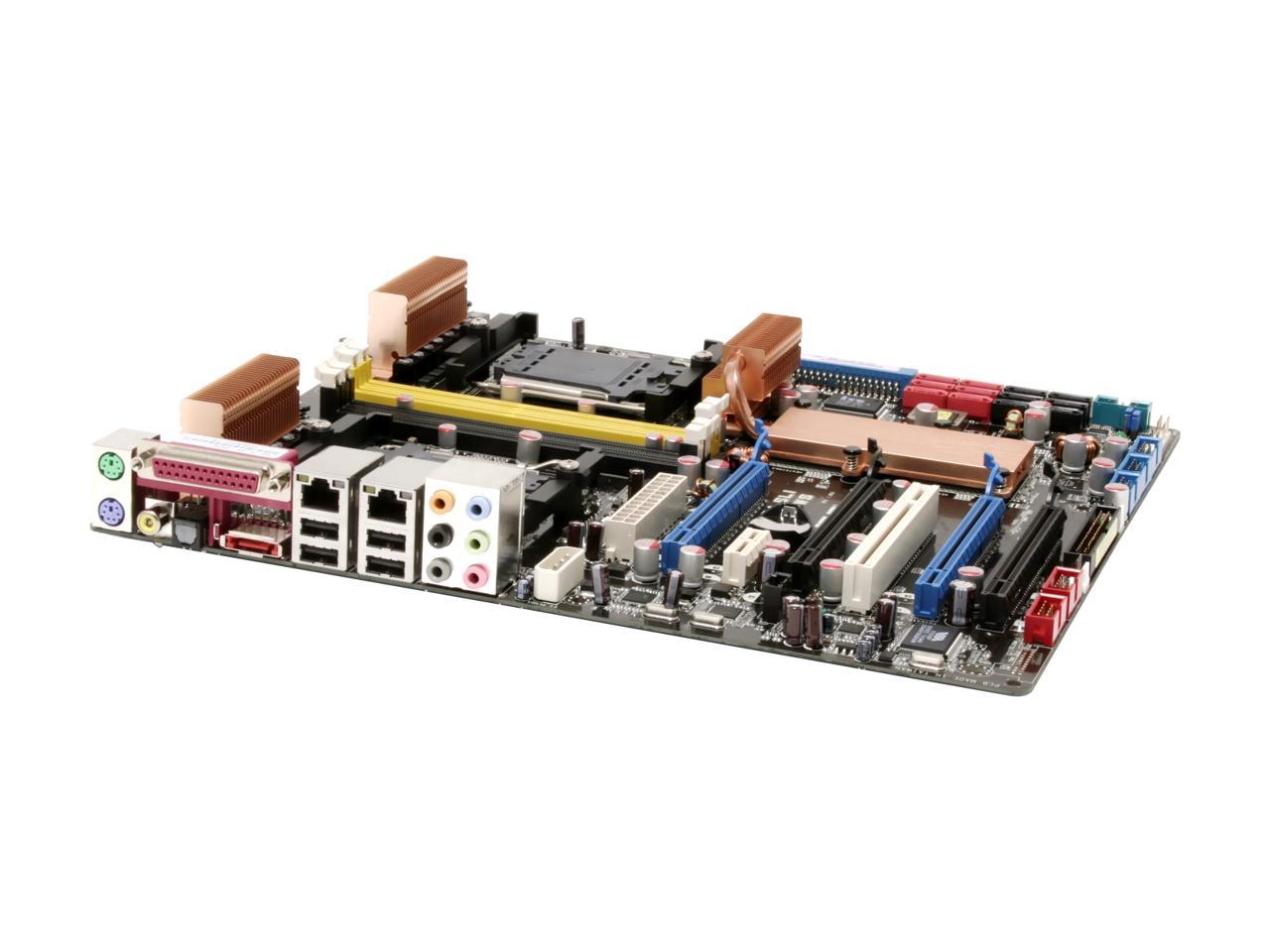 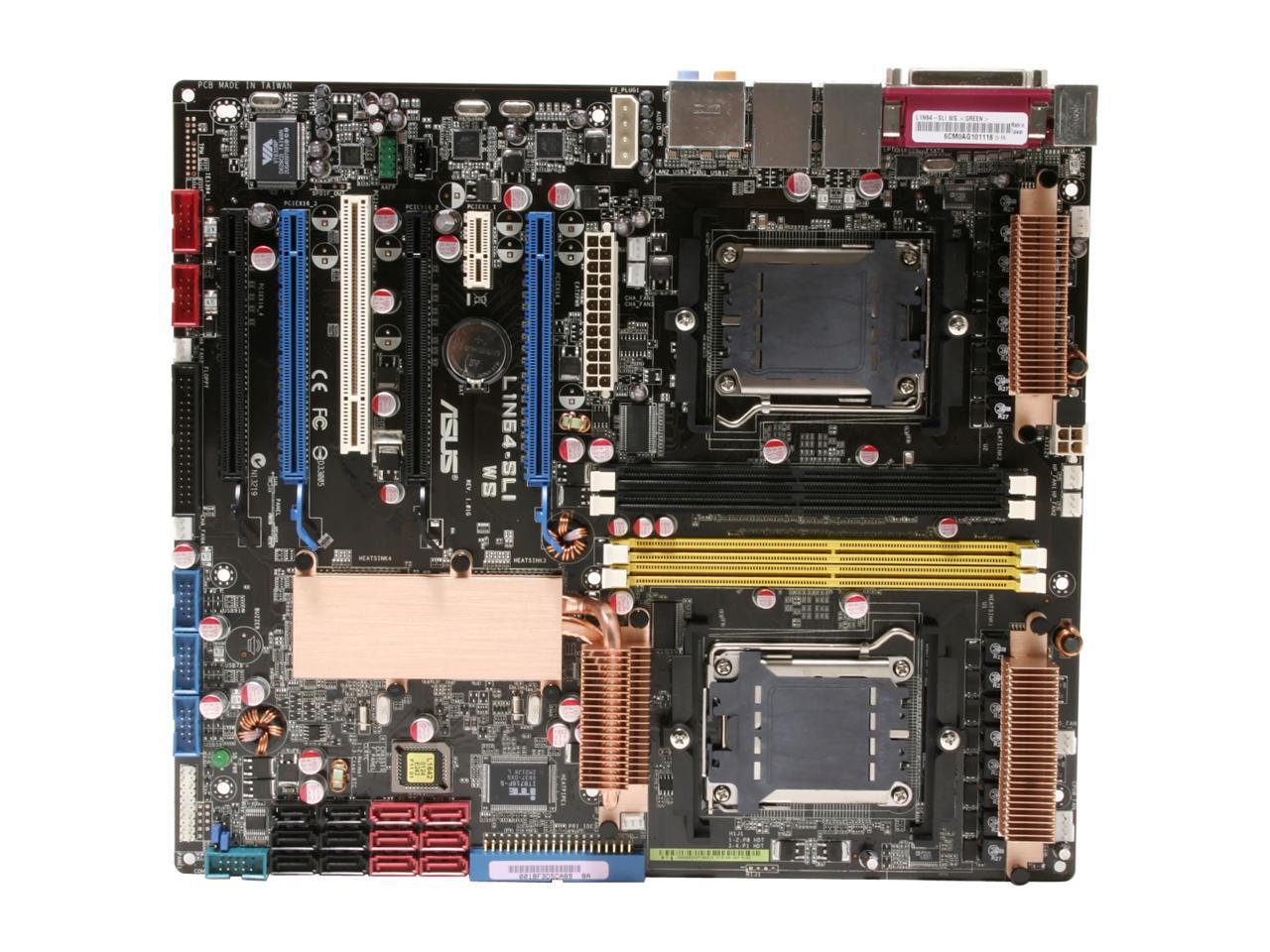 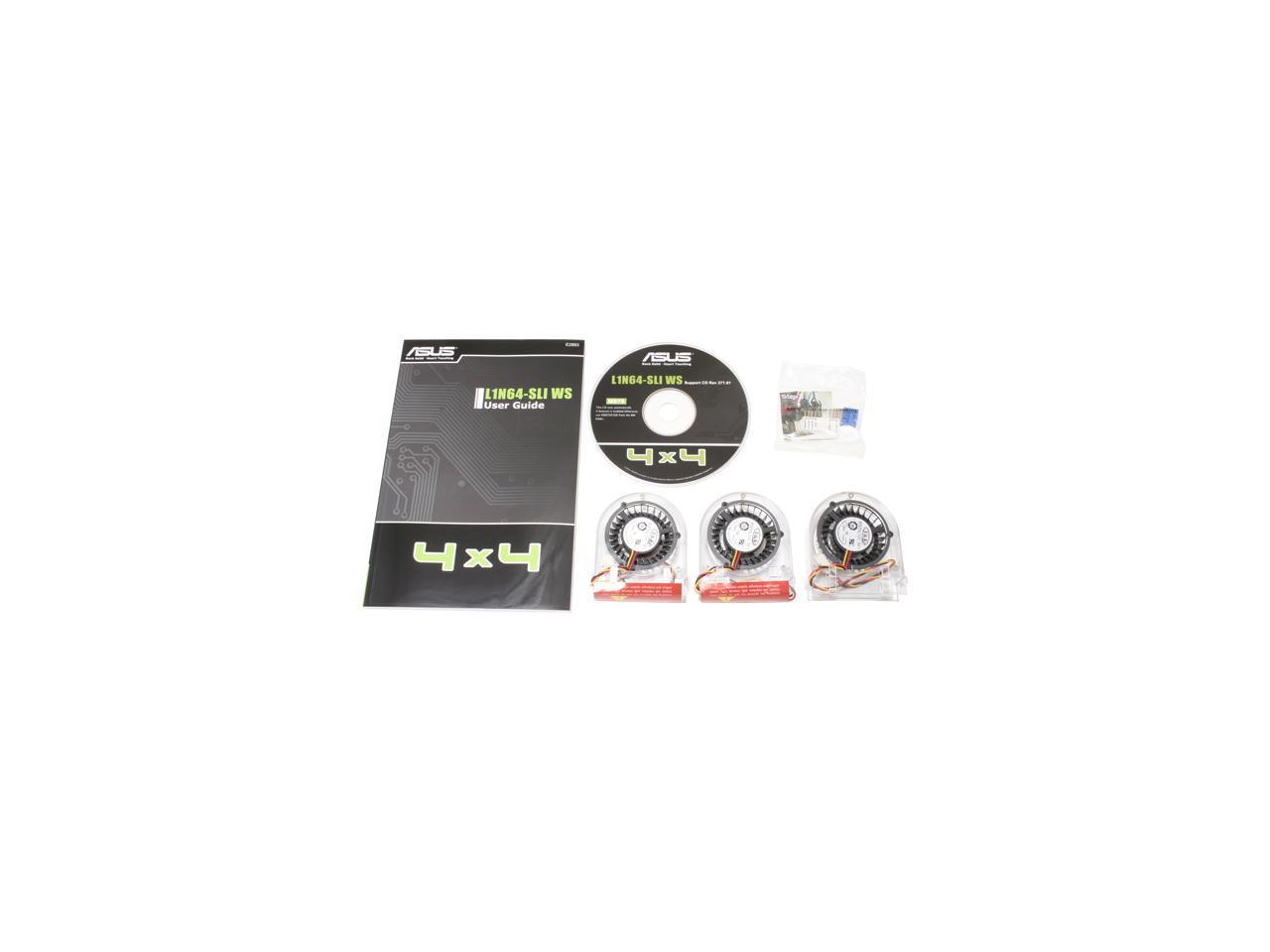 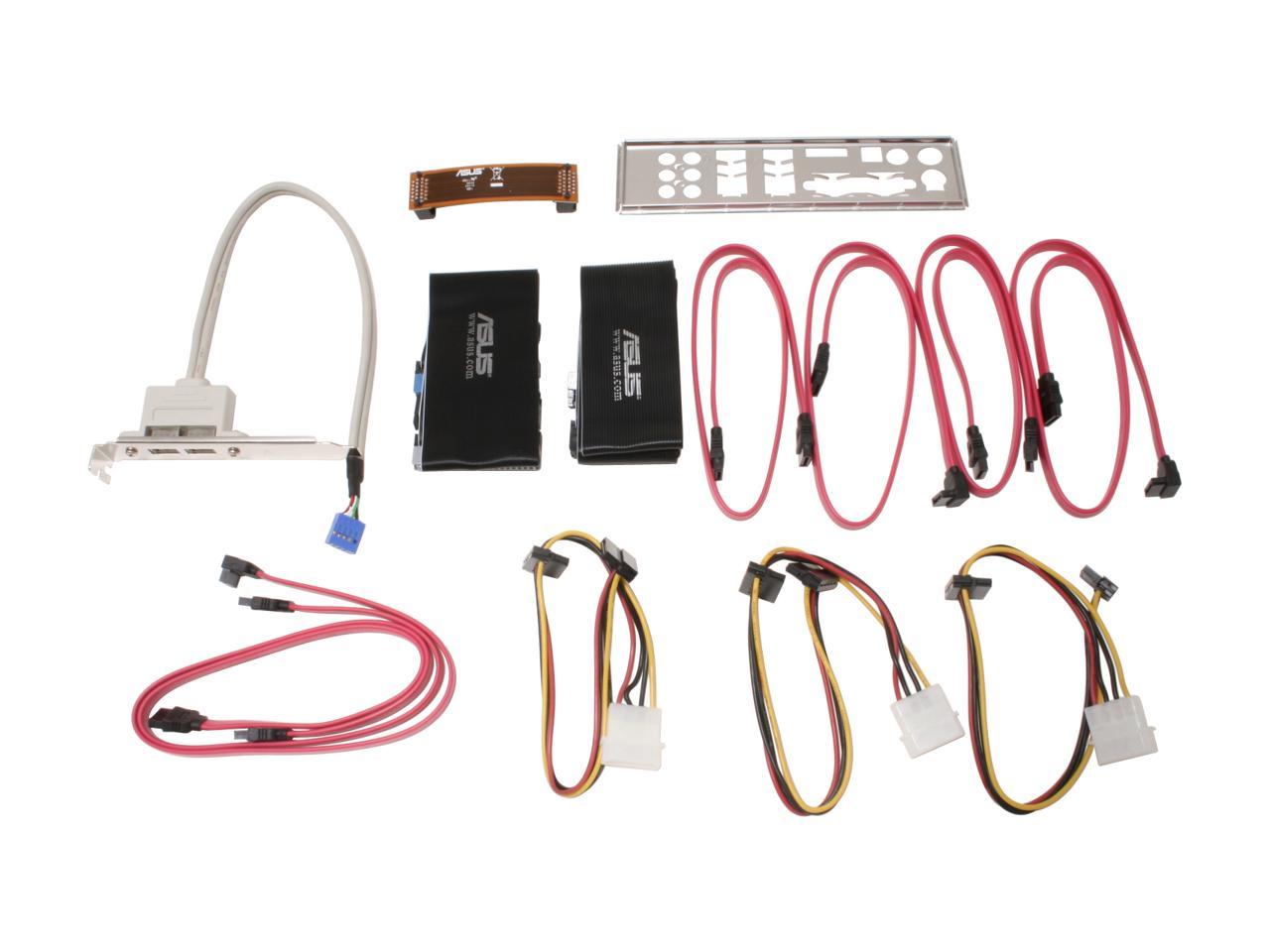 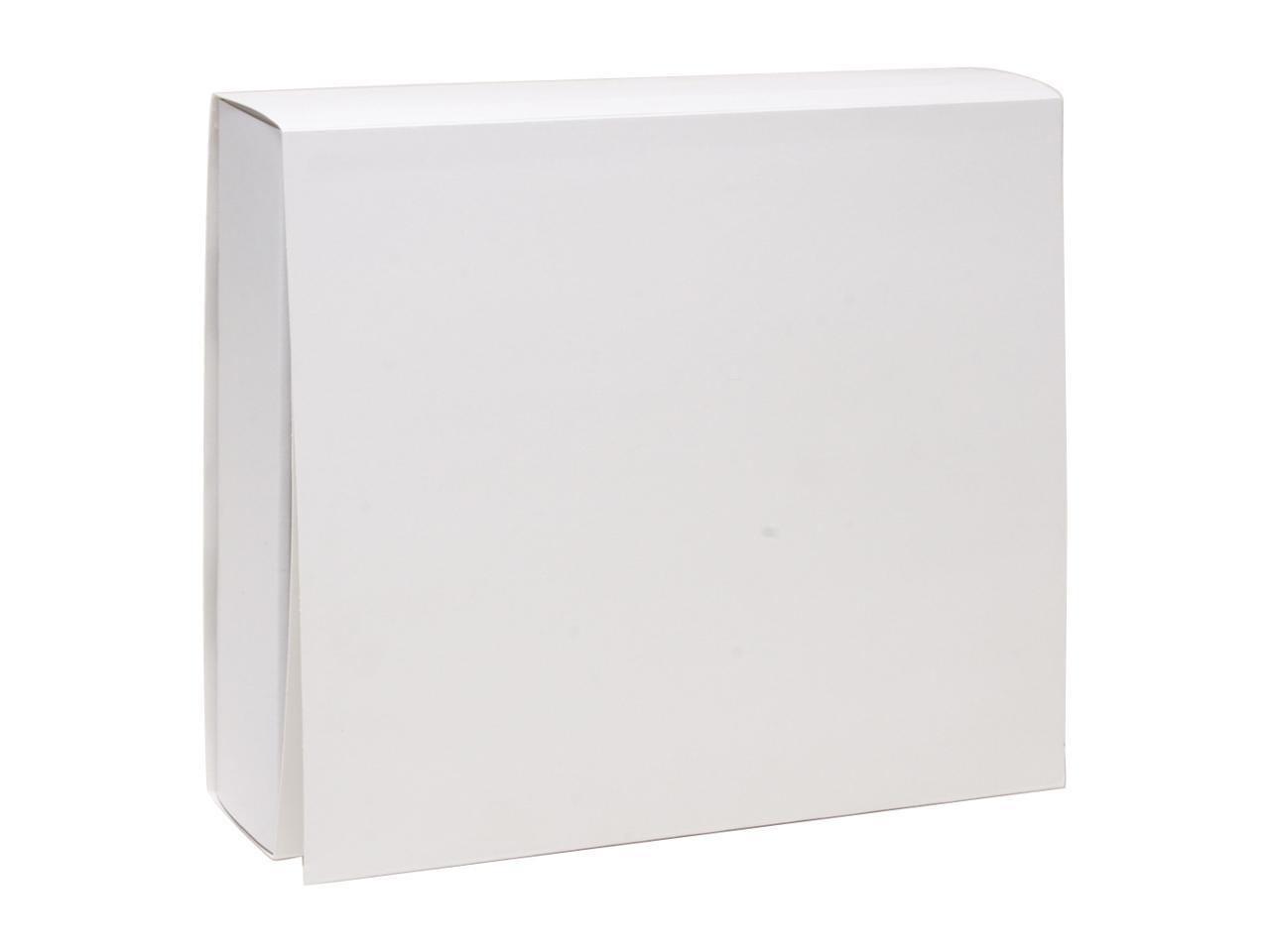 (130) Write a Review
OUT OF STOCK.
Overview
Specs
Reviews
An upscale "megatasking" motherboard with loads of power, the Asus L1N64-SLI WS is designed specifically with the enthusiast in mind. Equipped with an AMD dual socket L (Socket 1207FX), suitable for Athlon FX processors, the L1N64-SLI WS is more than capable of handling anything you may want to run. Using the Nvidia nForce 680a SLI chipset the L1N64-SLI WS supports Quad SLI which gives you the ability to use four graphics cards together for unbelievable processing power.
It also includes dual gigabit Ethernet ports, 7.1 channel onboard sound, and 12 SATA ports. With those 12 ports, by adding multiple hard drives to the system, this versatile card supports RAID 0, 1, 0+1, 5, and JBOD. For growing your virtual empire, it offers multiple slots, including four x16 (which can be used for graphics cards), and one x1 PCIe slots, plus an additional PCI slot.
With all this heat-producing operation going on, ASUS keeps you cool with huge copper heatsinks and heatpipes for silent, efficient cooling. For any gamer that wants to build an extremely powerful system, the Asus L1N64-SLI WS is a perfect base for your weapons systems.

Pros: works as adervertised.did take a minute to setup the fx-74's and 2 raptors in raid o.i believe the hardware is so far ahead of the software thatthis is an awesome investment, there is very little you can do to overstress 4 three ghz processors unless that is what your attempting to do. newegg was the first to have available and as usual they rock..

Cons: the raid setup was a little confusing but tat was becaue i failed to read the instructions in the micro print asus manual.the drivers for raid, internet adapter, first packet are found on the nvidia site package 9.73 also the drivers for the 8800's.was not complicated but prior use of asus boards eased the transition. the drivers have to be installed twice once at f6 then again after the drives are formatted. they require all three pieces to work properly.

Overall Review: good board, read the instructions only believe half of what you hear.for people whining about price,if if is too costly find a setup thats in your budget. amd has plenty of solutions to satify everyone and theres no telling when the price war will end putting this gear out of everyone's range. i would like to thank the reviewers that allowed me to buy 4 x 3ghz opterons for xxx$...you guys rule too...

Pros: Once I got third-party cpu fans, it runs great, cool and quiet. It is rock solid and has had uptime for months without a single problem. It runs linux well, have had SUSE and Ubuntu on the box and it runs visualization fast and flawlessly. Lots of USB and SATA ports. Works well with a well cooled case (recommend one with a side fan as well as front and back.

Overall Review: I would buy this board again and again. Highly recommended.

Pros: Bought this motherboard in March of 2007. Overall satisified with the performance and features as well as the potential of the motherboard. Its crammed with tons of features for gamers on of the more notable ones is the 4 PCI express card slots and the obvious advantage of being able to put in either 2 Barcelona quad cores (for servers) or the Phenom FX quad cores(for gamers/desktop users) which comes out on F (1207) socket in 2008. Oh and the 7.1 built in audio is a nice addon.

Cons: The size is an inevitable con. You give some to get some in this case and its a good trade off for all the features but expect to get a full size case (reccomend cooler master stacker)and possibly a larger power supply especially if your considering getting 8800s. Make sure it has both a 4 pin and a 24 pin connector. On a side note: if you do plan to get a PSU get a modular one! Your case will be a little tight with the motherboard with the video cards last thing you need is having tons of power cords dangling everywhere(even with a full size case), so to avoid cable management and bad air flow go modular.

Overall Review: Sound was also an issue with this motherboard, the 2 CPUs come with fans that are incredibly loud (air conditioner loud) which is annoying for extended use such as gaming or web surfing. If your looking for aftermarkets there arent many compatible with F-socket but I found out that F-socket 1207 which is completely different from the original F-socket is compatible with AM2 socket because the processors are based off of the FX-62 Windsor. Confirmed this by buying 2 Zalman CNPS9500 cpu coolers and they work just fine (Now the computer is near silent). Overall I woul highly reccomend this motherboard, F socket and AM2 socket are the future sockets of AMD and this motherboard was built for both performance and potential.

Pros: Excellent Board... I've been running this mb for about a year now without any trouble. I'm using this PC as an HD video editing workstation and it flies. I love it...

Cons: Price of the processors... but not really a con of the MB specifically.

Overall Review: I'd like to see how this performs on Vista... I am currently still stuck in XP Pro due to my Video Software compatibility issues.

Pros: good while it lasted

Cons: 6 months having this board it failed. After a month of ruling every other component out, it was decided the MoBo was bad. Unfortunatley, I had to go through Asus RMA (not Newegg). That is when hell on earth began. Asus support RMA and shipping Dept sucks!!! I was lied to 2 times as far when it would ship. They say it will ship in 10 days, @11 days told it will ship in 2 days. After them having my MoBo for 3 weeks they finaly sent a "replacement" board (not new...don't be fooled) It took a week to get via ground. The Mobo was stuffed into a undersized box with virtually no padding, every capicitor was bent over. And worse yet the pins in the socket were bent. On the 2nd cpu socket there was notable excess thermal grease from previous install, and dust prevelant. At this point I have to ship this hunk of s^!t back and wait for a "new" one. They say they will over night..yeah right!

Overall Review: Make sure it's your MobO thats bad Because you WILL get a nutted on board back in return. It cost me $20 to send it to them, and I have about $25 in long distance charges ( yeah they dont have a toll free #) and endless hours of aggravation. I have a asus products in my box o'plenty....I from now on will never buy Asus again!!!!!

Pros: Very Very Fast!! This is my frist time using an Asus board. And so far seems to be a very stable board

Cons: uses a alot of power,which in turn makes alot heat...Im not sure why they say its a socket L when its a socket F

Overall Review: none yet

Pros: This board is fantastic!! I had absolutely no trouble with any of the hardware or software I installed. BIOS will support at least 2 RAID arrays in groups of up to six each. I use this board for high quality HD & SD sound and video and it ROCKS!! BIOS will also automaticaly select removable HD drive to boot system in case of RAID failure. Using with AMD 74FX chips, Nvidia Black Diamond, Asus Xonar, Canopus Pegasus, Logitech G11, NEC LCD2470WNX (love this one!) XP32. Excellent manual by ASUS.

Cons: Only one PC slot. Limits choices of video converter cards, sound cards together. Must use 90 degree sata cables if Black Diamond is installed in bottom slot. No biggie though.

Overall Review: This is the 9th machine I have built and by far the best. In my experience, AMD has proven time and again to be a better performer than INTEL. Be very careful of static electricity when building your machine and you will have no problems with haveing to return parts. ALWAYS ground yourself and your boards before working on them. If you are going to do video transfer and serious editing DON'T USE VISTA!! At least not yet. Drivers are quirky and video software needs to catch up. AS usual Newegg's service is great, they have better service than some local stores I have tried. Update BIOS first, in DOS before doing anything else.

Pros: Forgot to mention I read reviews here that suggested Riva Tuner or other software to increase the v-card [ in my case 2 8800 Ultras] fan speed to 100% when using this mobo. I agree it is a must. Also, my son installed AMD Optimizer from AMD web site. Supposed to help with gaming software that is not specific to dual core. My son says it makes a difference.

Overall Review: Built 8 dual cpu socket Abit and Tyan computers in the past for my kids. This motherboard layout is the best so far. Easy to install components when building. Easy to remove components after it is built. The two 8800 Ultras cover 6 sata slots, making them unusable. They also block access [though useable when building] to the fire wire, usb, floppy, etc sockets at the bottom of this motherboard if using the 2 blue v-card slots as I did to allow access to the only std pci slot. The 8800 Ultras use 1 slot but take up the space of 2. But I knew all this up front from reading reviews on mobo and 8800 Ultras.