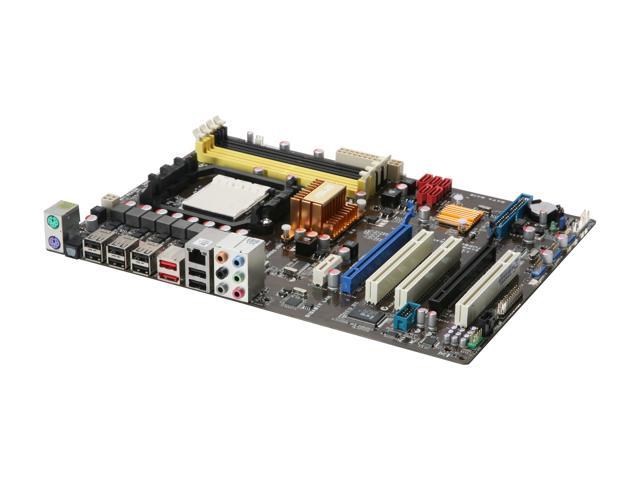 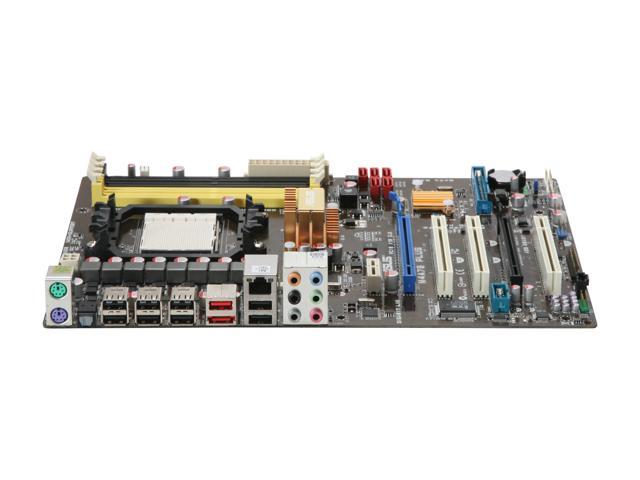 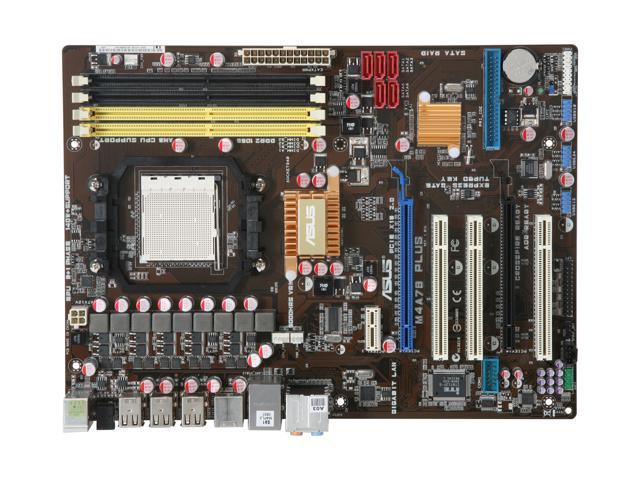 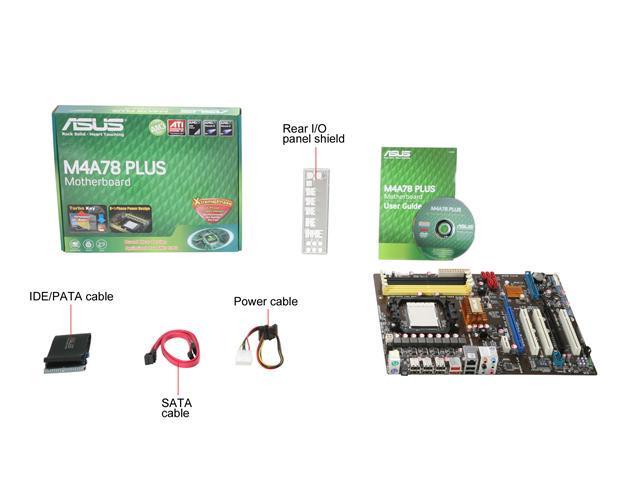 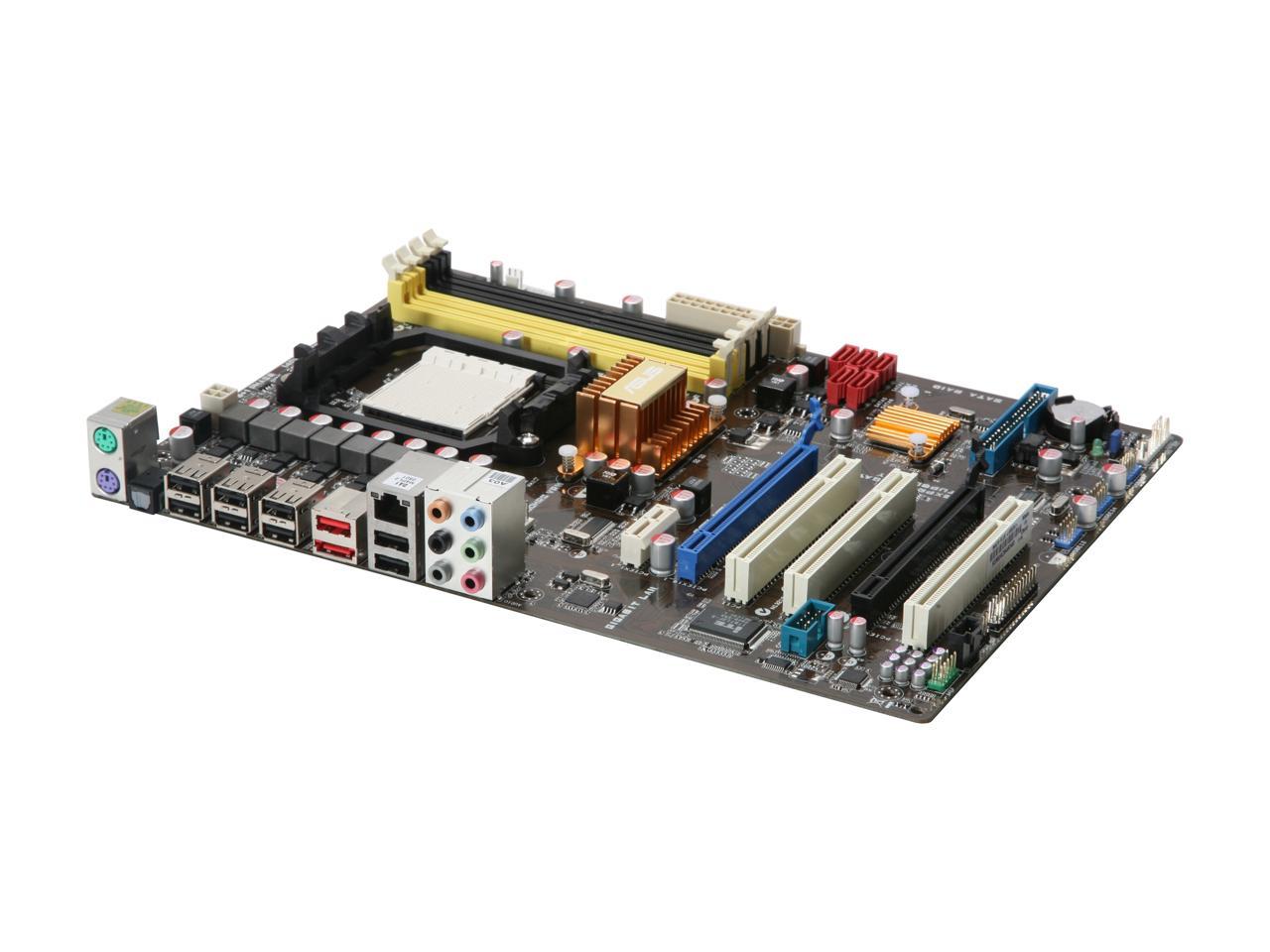 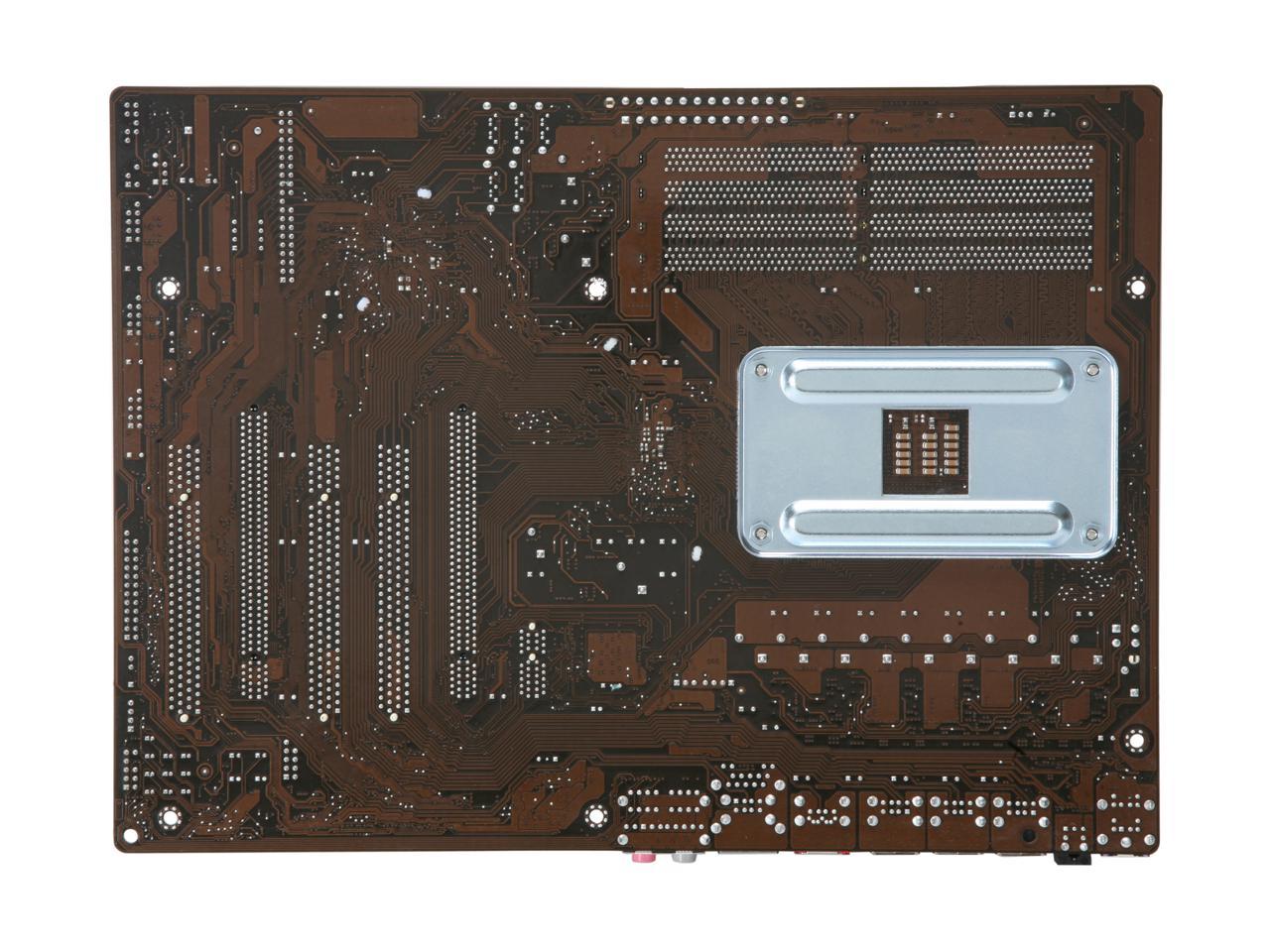 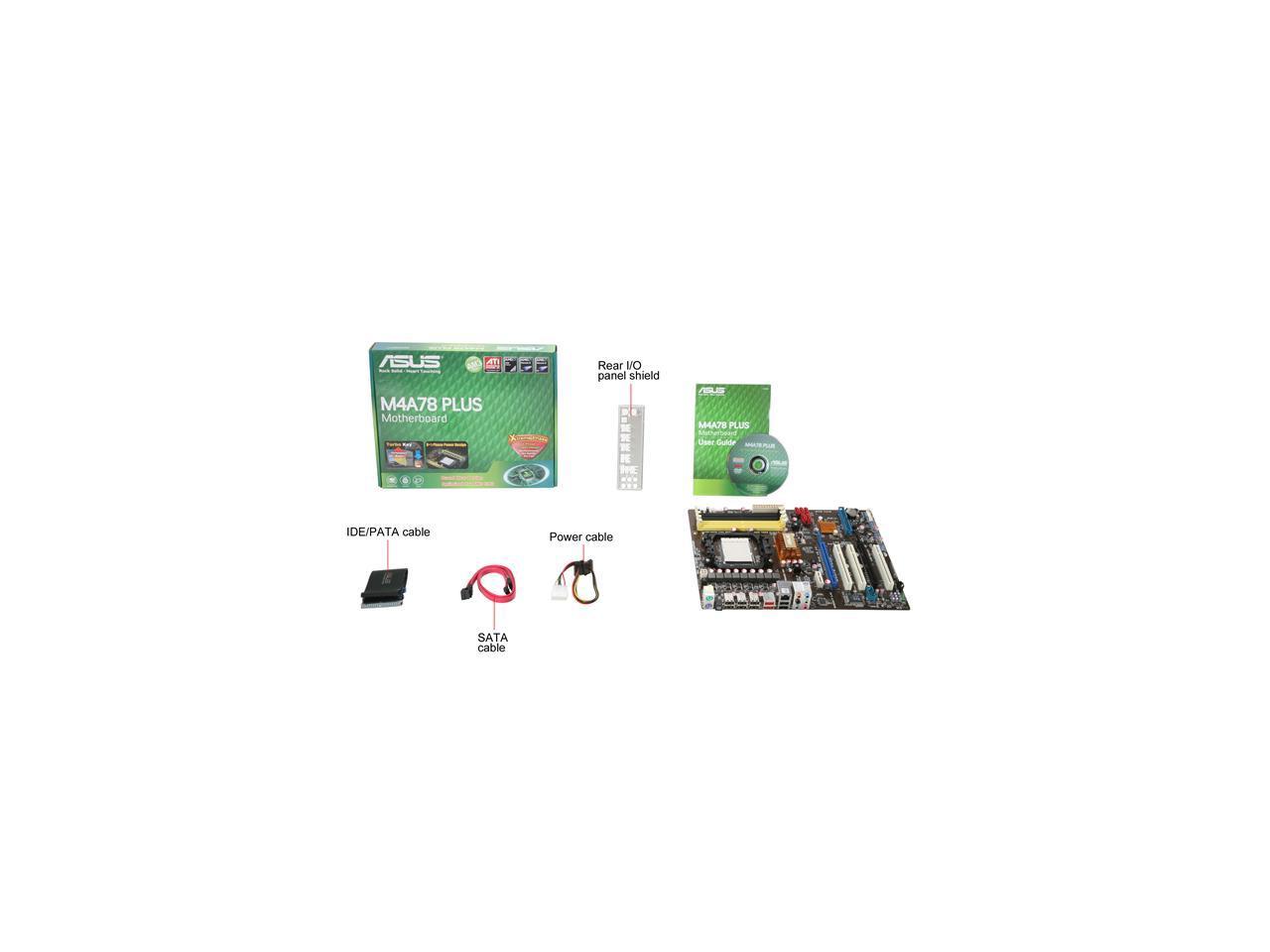 (320) Write a Review
OUT OF STOCK.
Overview
Specs
Reviews
Boasting the new AMD AM3 socket, the Asus M4A78 allows you to elevate your rig beyond the standard limits with support for the next-generation 45nm AMD Phenom II processors. The board is able to reach memory speeds up to 1066 MHz for blazing fast memory access for today’s latest applications and games. A pair of PCI-Express 2.0 x16 cards can be mounted for cutting-edge graphic power with support for CrossFireX.
Besides the 2 PCI-Express 2.0 x16 lanes for the CrossFireX video, there is also a PCI-Express x1 and 3 PCI slots providing the flexibility for further system enhancements. Storage won't be a problem with 1-PATA connector plus 5-SATA connectors. Asus Turbo Key transforms the PC power button into a physical overclocking button. After easy setup, Turbo Key can boost performance anytime you like, without interrupting on-going work or games.
With current trends leaning towards green tech and energy savings, this board adopts the brand new 8+1 phase VRM power design to deliver improved energy efficiency, dramatically lower system temperature, and enhanced stability for overclocking. Furthermore, the Asus exclusive EPU (Energy Processing Unit) technology provides total power system efficiency by detecting current loadings and intelligently moderating power in real-time, helping save power and money.

Learn more about the ASUS M4A78 Plus

Pros: - Physical installation very easy, fit without any problems. -Documentation is basic but complete, easy to connect everything including all the various front panel connectors. - Effective layout, all connections in easy to reach places, no running power cables or connectors to strange corners of the board. - PCI-E slot is well positioned, no problems installing large GTX260 Video card, no cables or connectors blocked off. - Driver CD easy to use, as I have come to exact with ASUS. Why can't everyone be like this!

Cons: - Not critical, but wish all 9 USB ports on the back panel were same color, why is the one with the External SATA connector red? Might confuse someone ig they don't look closely. - No MB mounting screws, not major but worth knowing if you don't have any.

Overall Review: Another solid board from ASUS, I have used several other brands with good results, but ASUS always give me the least problems.

Cons: No MOSFET cooler, no 1394 and no floppy connector. Not enough fan connectors. No serial comm connector on rear panel. Rear i/o panel plate holes were off by 1/8 inch so installation was a bit tricky, my old board (Asus) in same case was fine. Need better quality control there. PWM fan config in Linux is very strange, I'll just say that much. The older Asus Qfan setup worked better in Linux - must be something new with the Asus EPU. I can't reduce CPU voltage so it runs somewhat hot @ 1.33 instead of 1.25 for a Phenom 9600 BE at stock MHz.

Overall Review: I bought this board because it has three PCI slots I needed for existing HDTV cards and no onboard video to replace an aging Asus M2N-SLI Deluxe (which I adored and miss greatly). I have an old Phenom 9600 Black Edition in it w/ 0602 and one set of GSkill F2-8500CL5D-4GBPI DDR2-1066 in the Black Slots in unGanged mode. With three hard drives AHCI SATA slots come up in strange order w/ Linux Port: 1=sda, 3=sdb then 2=sdc.. weird... It configures a third HPET IRQ as CPU time source for CPU0 - no slow clock issues with my setup. Video seems to be more presice timing. Onboard SPIDF out works great with Linux also.

Pros: Bought this board to upgrade to a Phenom chipset, great layout, has plenty of SATA and USB slots for my needs, fired right up with previous Hard Drive from old rig and found all the drivers so didn't need to do a reinstall on Windows.

Cons: Could have come with more than 2 SATA connectors since it has 6 SATA slots, but at least I got a few.

Pros: Lots of USB ports. A well thought out design if you plan to crossfire. 5 SATA ports. If you are looking to upgrade on a budget this is absolutely a great choice. Straight forward BIOS options. I had it in the case and installing Vista within 20 mins. The driver disc is quick and painless. Others commented on the bracket plate not fitting, but I had no problems with it what-so-ever.

Cons: No onboard graphics. No biggie there.

Overall Review: I actually had ALOT of fun building this rig. One of the most headache free builds I ever came across. All solid state capacitors. I plan to buy another one of these for my girlfriend's computer.

Pros: I love this motherboard. Love all the USB connections. Fits perfect in my Aztec Raidmax Gaming Development Computer Case. It even has a eSATA connection on the back. It is bigger in length than my older mobo.

Cons: CPU Fan Power Connector is a 4 pin. So buy any CPU Cooler that has a 4 pin connector. The rear I/O panel shield is a pain to connect. I left mine off for the moment. Looks good without it. All though a mouse could get into my tower and have a party inside my computer case. J/K

Overall Review: I new rear I/O panel would be nice to keep the mousie out of my computer case.

Pros: Used this motherboard for my first build and paired it with a Phenom II x4 920. So far it has been awesome, no complaints.

Cons: could have gone for another fan connection, but thats an easy fix

Pros: Very solid board. Plenty of features without a lot of cost. OC'd a Phenom II 720 to 3.6GHz, could go farther if I needed to. Booted up without any problems.

Cons: There aren't many fan connectors on the board, and I had to turn the fan on my Freezer 64 to make it reach.

Overall Review: This is a great board if you don't need a lot of extras. I'm very happy with the purchase.

Pros: everything went together great, manual was very helpful, booted fine, worked like a pro for 2 days.

Cons: then the onboard network dropped out. rebooted and it worked for 30 min then quit for good. nothing i tried would make it work. when i tried to reinstall the drivers it told me to plug in the network card. THE BUILT IN NETWORK CARD! even after reinstalling windows xp, twice!, it still would not work. needles to say im RMAing it for a new one.

Overall Review: i have heard so many good things about asus, what gives?