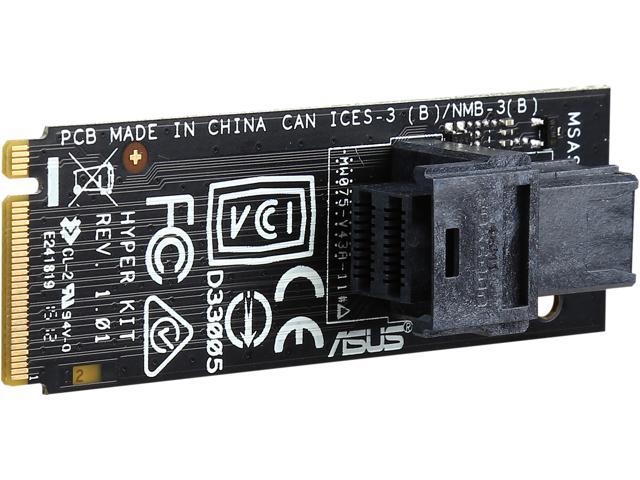 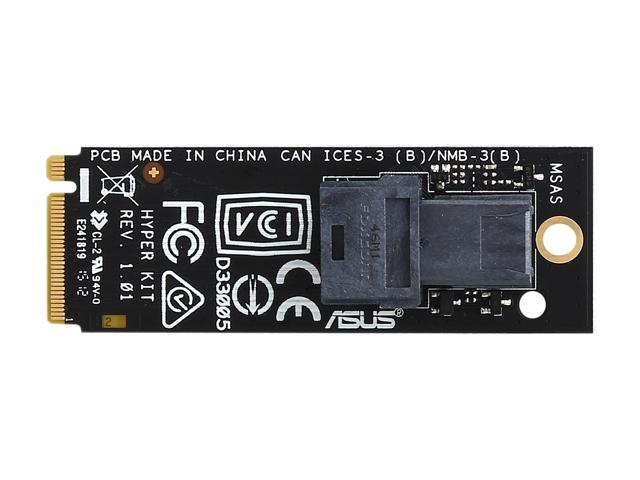 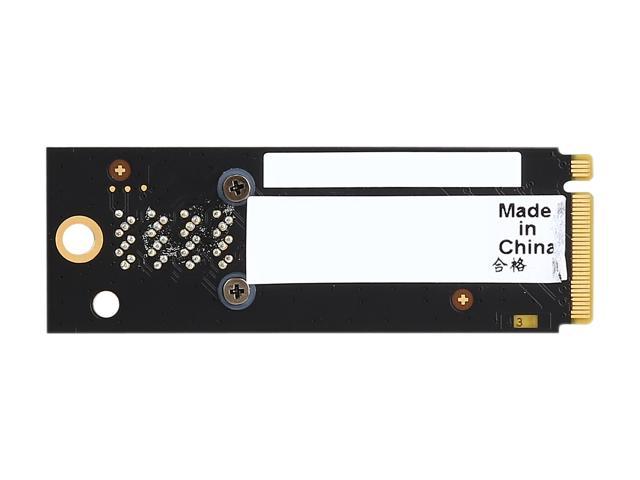 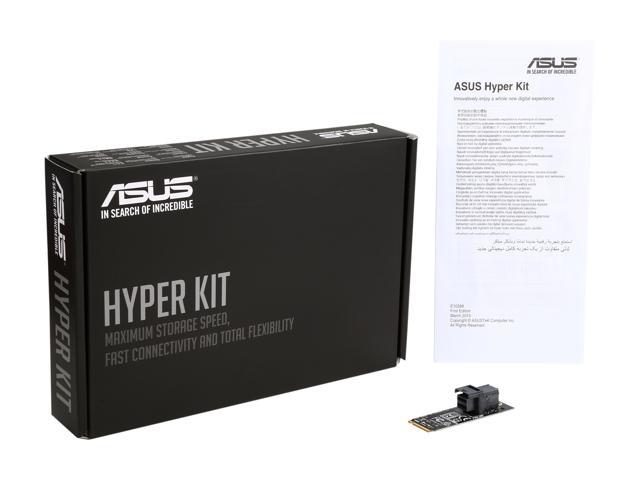 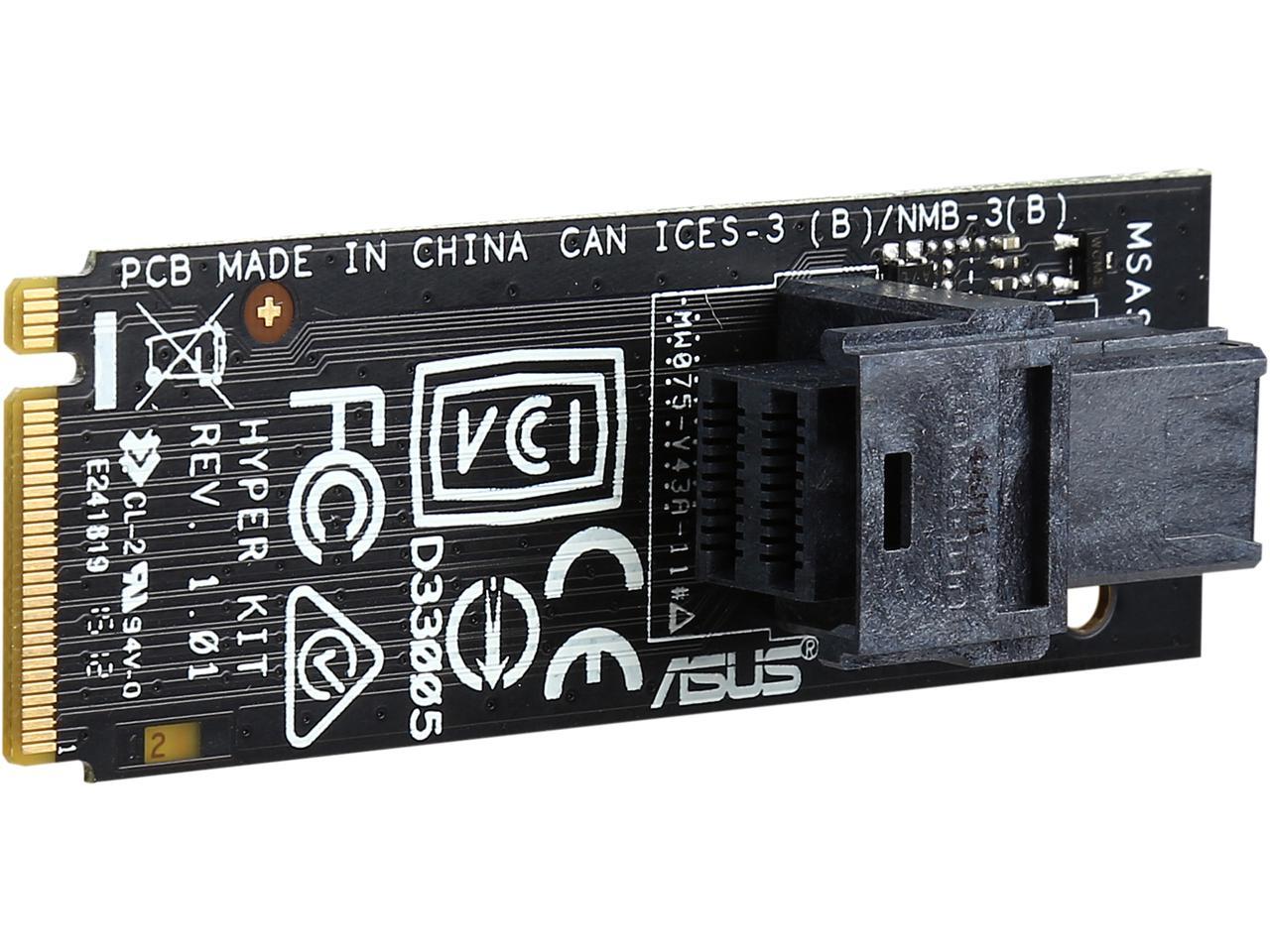 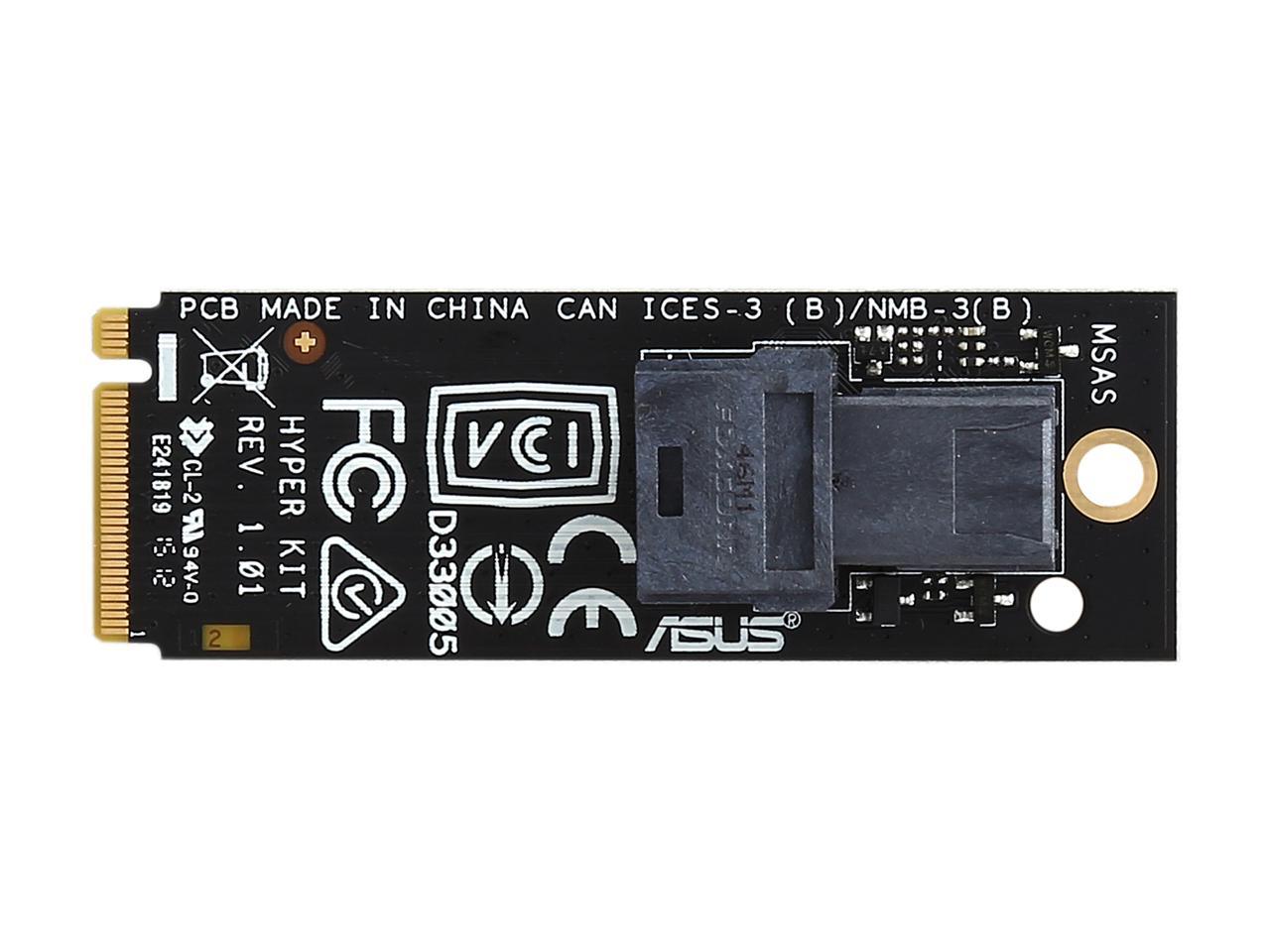 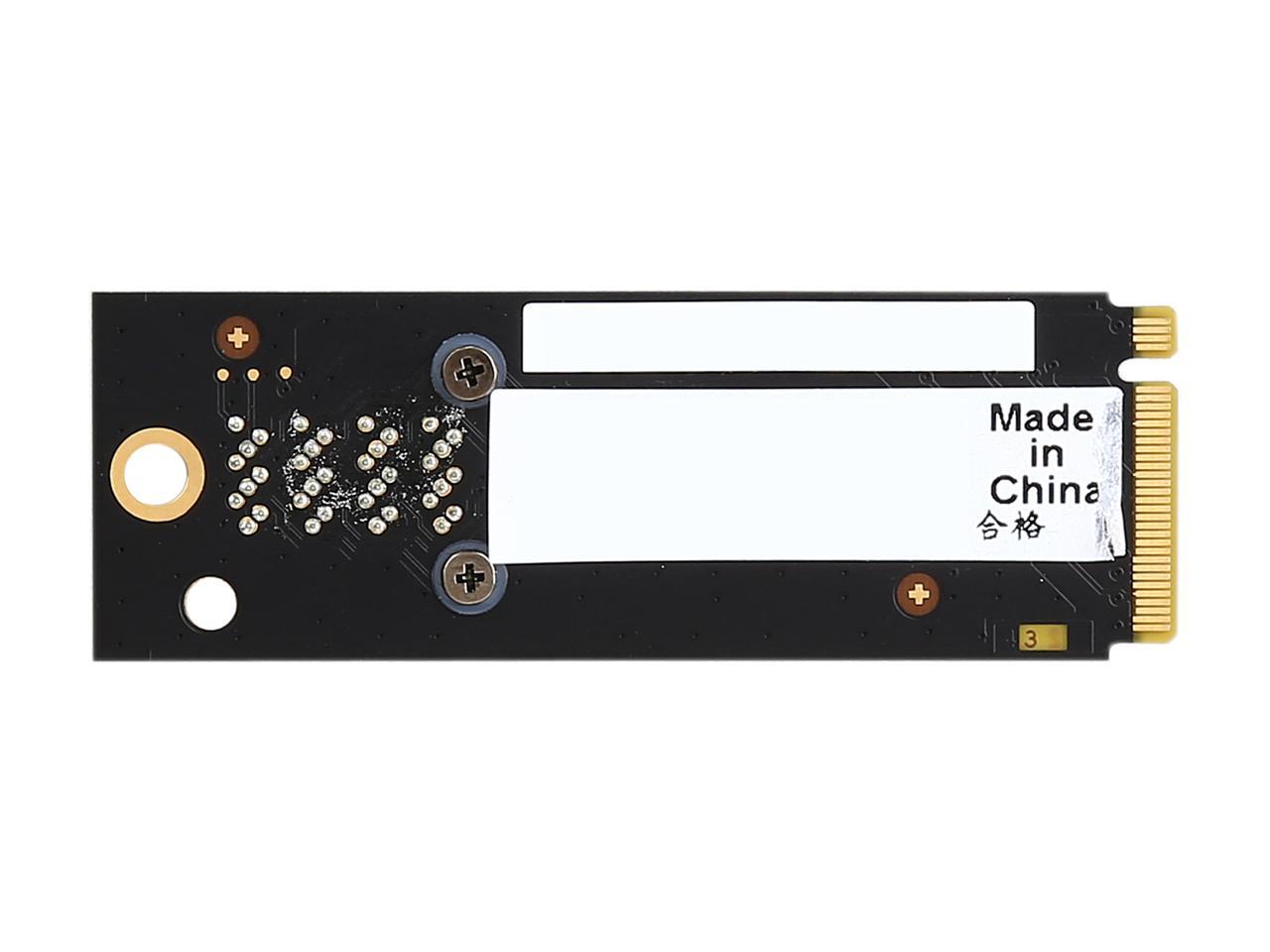 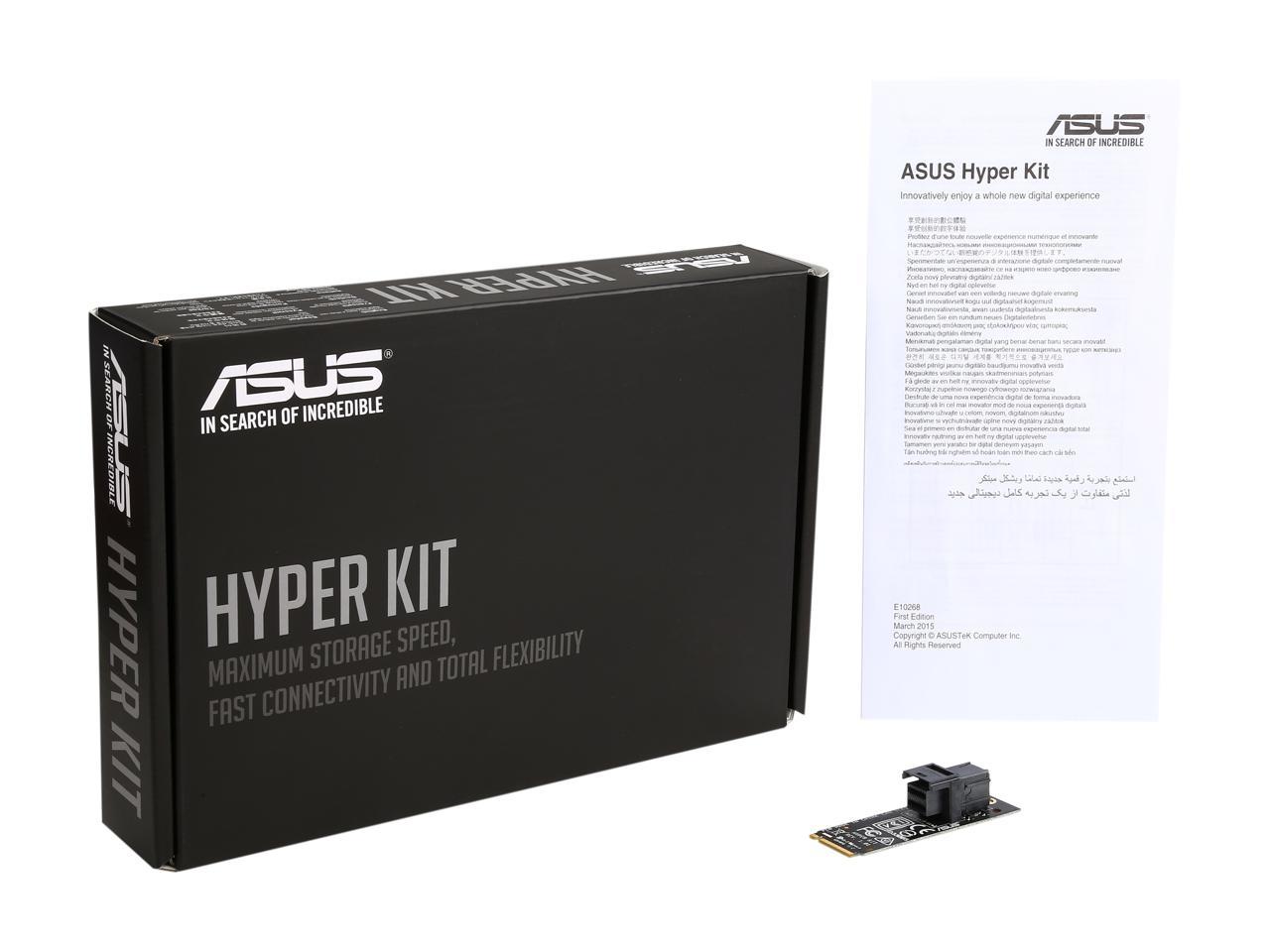 Pros: Obviously you need this for next gen SSDs with insane transfer rate, for intel-based drives. it works but not how you'd think... (discussed later)

Cons: sits too high off of the motherboard by about 1/2" and runs into 2nd graphics card. They have the m.2 slot directly underneath the 2nd graphics card slot on the rog maximus VIII motherboard I have, and from what I heard it's the same on other boards too (x99 ones).

Overall Review: There are only two ways to remedy this issue if you have a graphics card that will hit it. The first way is to not get a 2.5" form factor ssd and go with the add-in card (hhhl) if available. The second way is if you are stuck with a 2.5" form factor, you must either modify the case of the GPU (highly not recommended) or source a PCIe 3.0 x4 add in card that has an m.2 M-key slot. The add-in card is where you will insert this hyper kit to which you can then plug in your hyper ssd drive. The m.2 port on the mobo is running on the same lane as x4 anyways so its literally the same thing with maybe some extremely minor differences in speed.

Pros: Inexpensive Does what it's designed to do. No drivers needed.

Overall Review: Inserted it into my m.2 connector, connected the cable that came with my Intel 750 Series 400GB SSD. Enabled the Hyper Kit option in the Asus BIOS. and it was recognized. However, Windows 8.0 or less installation media will need the NVMe driver or windows install won't see the drive. Windows 10 finds the drive without issue. Window 8.1 is suppose to, but I had to install 8.0 and then upgrade to 8.1 as the 8.1 CD doesn't recognize my 8.0 product key. So I didn't have a 8.1 install media to test with.

Pros: The part at least does exist for those arrangement that can take advantage of it. Not tremendously expensive.

Cons: Sits too high, as another reviewer stated. The PCB is too short to avoid video cards on X99 Rampage V Extreme.

Overall Review: I have the Rampage V Extreme X99, a high end enthusiast board by ASUS. The same company that distributes this Hyper Kit to use NVMe with drives. It is listed as compatible. However, the mini SAS connector is inline with the first x16 PCI-express 3.0 slot and is not usable as the mini-SAS connector conflicts with the video card. This motherboard is designed by ASUS for up to 4-way SLI. ASUS tech support says they can't possibly conceive every custom build. That's true and ultimately it is my fault for not measuring card length, but ASUS HAS to know that an enthusiast board is probably going to be part of an enthusiast build > enthusiast grade graphics cards are freaking LONG (most of them at least). ASUS has no shortage of long graphics cards in their lineup. To design this product such that the Hyper Kit interferes with a card installed in the first PCIexpress slot, where most builds will put their video card, is really unforgivable. For them to not make more than one kit version (length or fitment) is pretty thoughtless of them too. Whatever you do, make sure the M.2 socket and PCI-express slot placement allows this Hyper Kit to be mounted without interference from graphics, SATA ports/cables, USB cable, chassis (ASUS X99 Deluxe I believe is straight up),etc. Don't stick yourself with the expense of this kit and the NVMe drive as I did. It's so easy to not realize small considerations when building or upgrading a system. It's a crying shame that ASUS has shown such poor support for a premiere product like the R5E with regard to the 2.5" NVMe drive Hyper Kit (which will mostly find its way into high end builds).

Pros: Plug this into the m.2 slot in your X99 motherboard(or z170 now), hook up your Intel 750 to this and to sata power, turn it on in the BIOS, and you are in the SSD promised land. I am using this on an ASUS X99 Sabertooth.

Cons: I think this should come included with the motherboard.

Overall Review: I read that this can interfere with a 2nd graphics card if you are running SLI. I am using an X99 Sabertooth board with two Gigabyte G1 980 Ti cards, and while it was tight, this was able to fit without a problem.

Pros: Allows you to connect an Intel 750 SSD 2.5" without installing an expansion card that would block airflow to a video card in a SLI setup.

Cons: It's somewhat bonkers that after its installed the receiving connector points towards the motherboard when the Hyper Kit is installed vertically as it is in a ASUS X99 Deluxe. I would have preferred the reverse orientation so that I could unplug the cable easily should I need to.

Cons: Arrived Broken Having to spend $20 to make a hard drive work seems a bit expensive.

Overall Review: I will write a better review when i receive one that works.

Overall Review: It is not the fault of the card that the placement issues exist. It is about perfect if you have no plans to do SLI. It is the fault of the motherboard socket placement that the SLI interference exists. If you want to hook an NVME device like the Intel 750 2.5" Series of SSD's to an Asus Z170 Deluxe Mobo (as well as most other Z170 mobos) You have to use this little adapter. The little Mini SAS connector is very tall and interferes with the second video card slot enough to prevent insertion. The only workaround right now is to use an adapter card and plug this into that adapter in your third PCIE slot. The new EATX Maximus Xtreme has the same connector right on the board so it won't be an issue unless you want more than one. I saw a video where they announced that a new adapter is coming but I am not sure if that is true or not. There is not much room for anything in that spot in a motherboard. My 980ti's almost touch the board where this is supposed to fit.

Pros: Small, efficient, not much to it. Excellent throughput speeds.

Cons: The box is huge compared to what it needs to be, seems excessive. Not really a device con though.