Feel 100% satisfied with your purchase -- with no restocking fees & no return shipping costs* within 30 days of delivery. Learn More
This item is currently out of stock and it may or may not be restocked.
Out of Stock
Add To ListFound on 272 wish lists 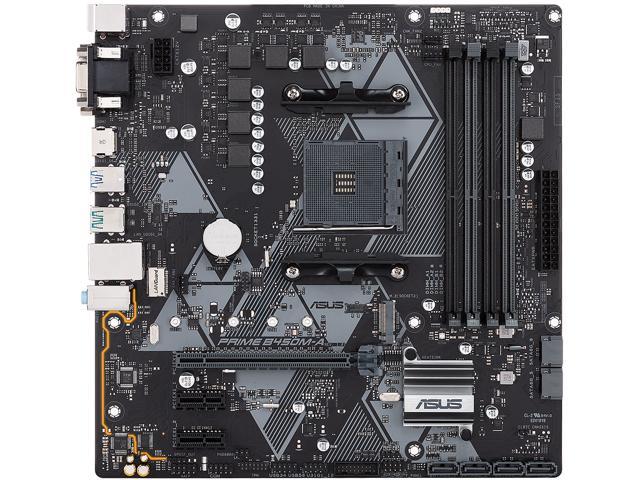 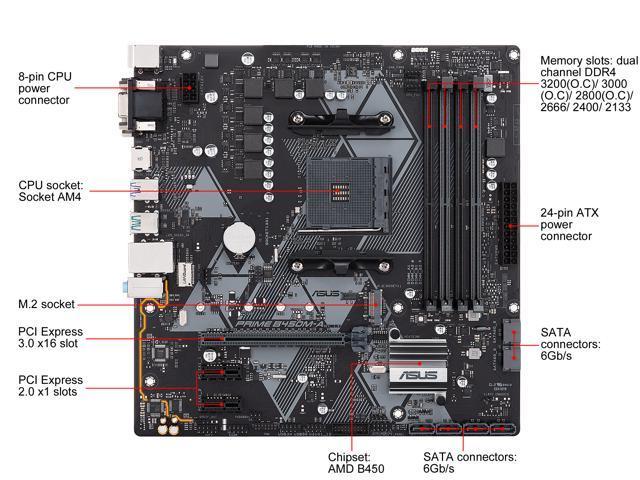 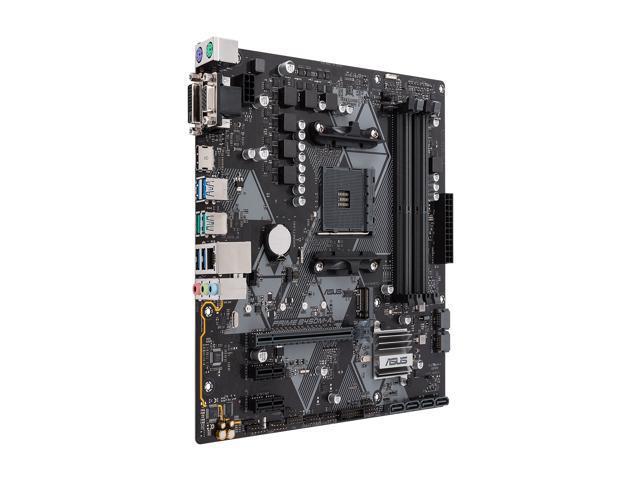 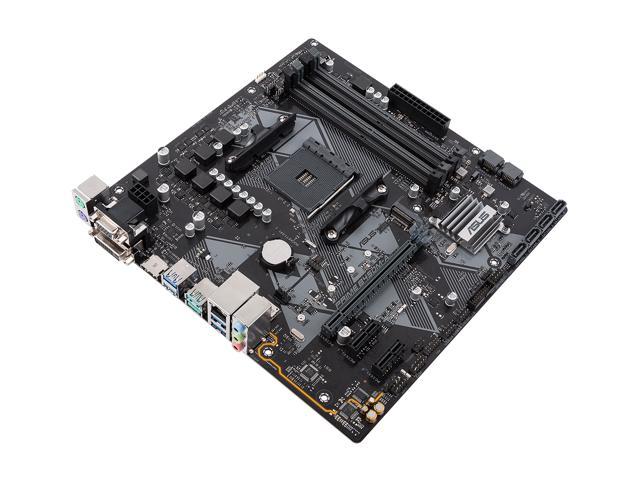 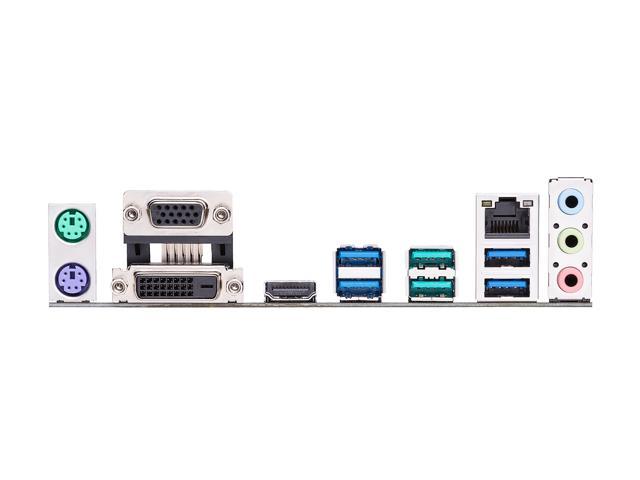 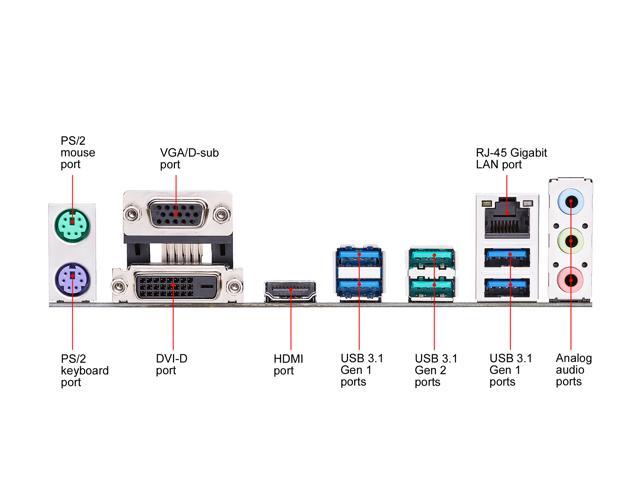 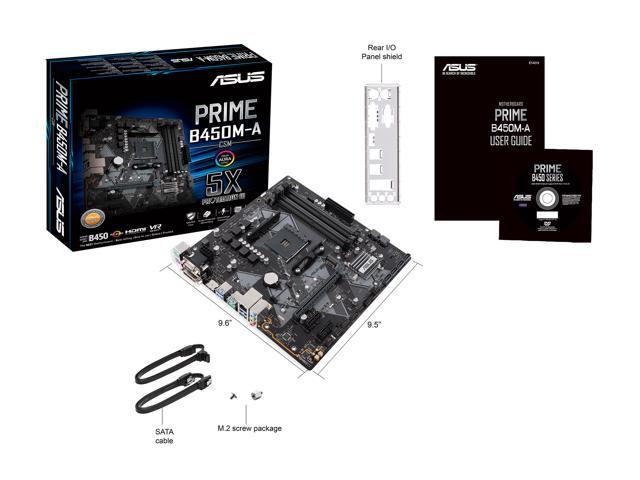 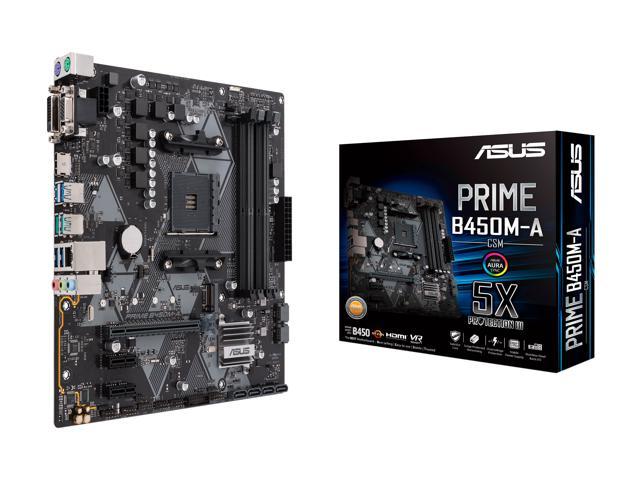 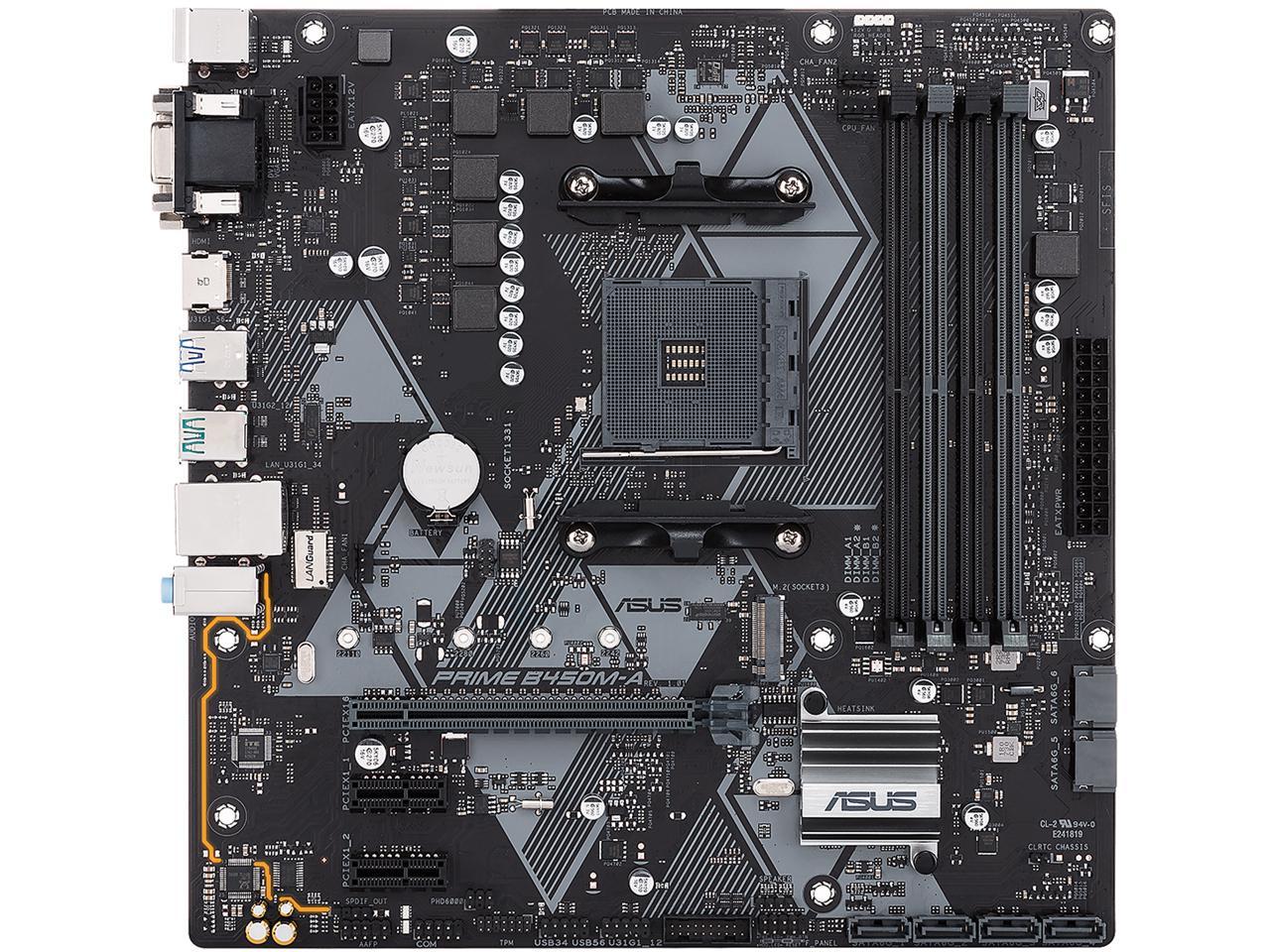 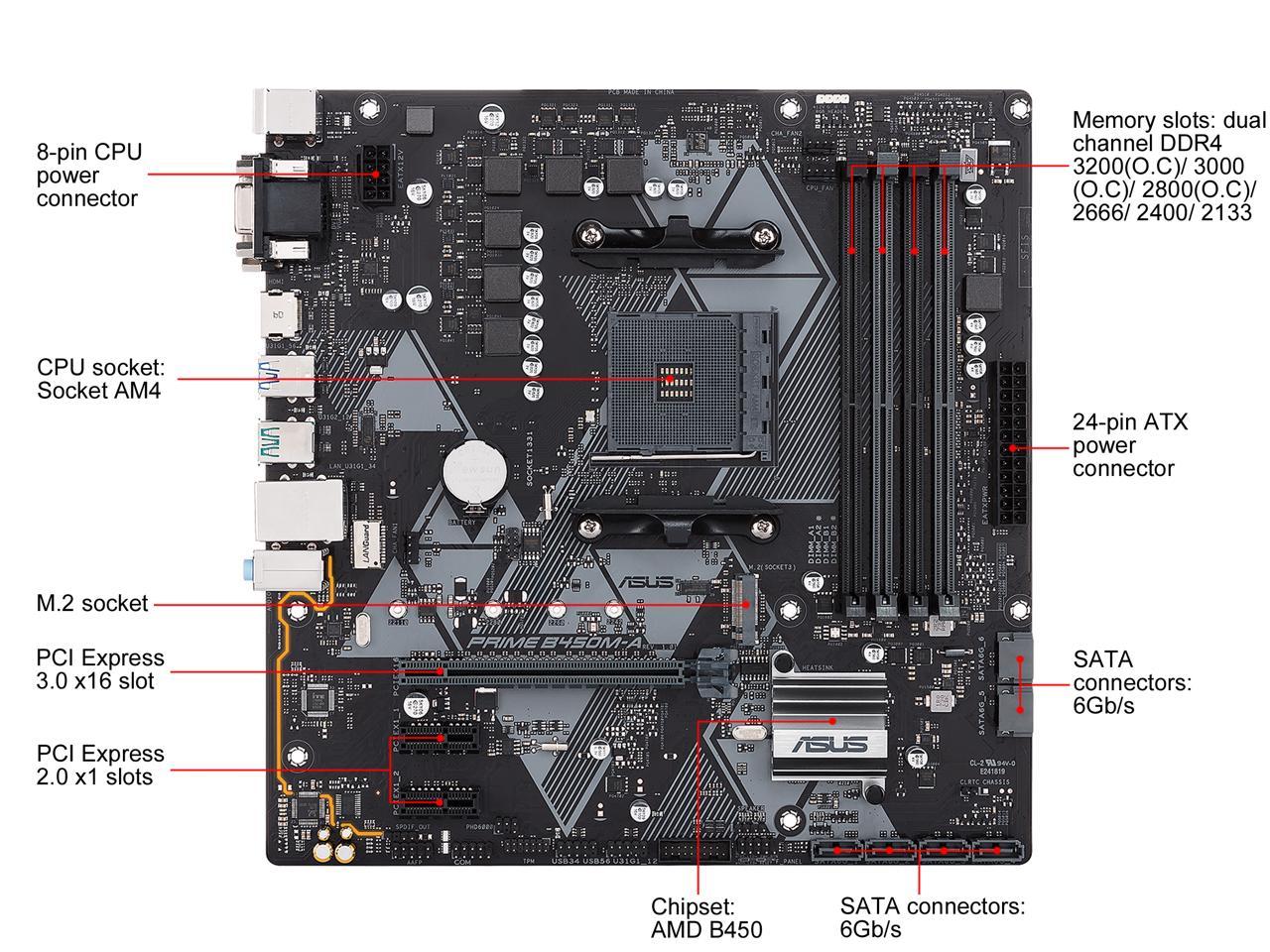 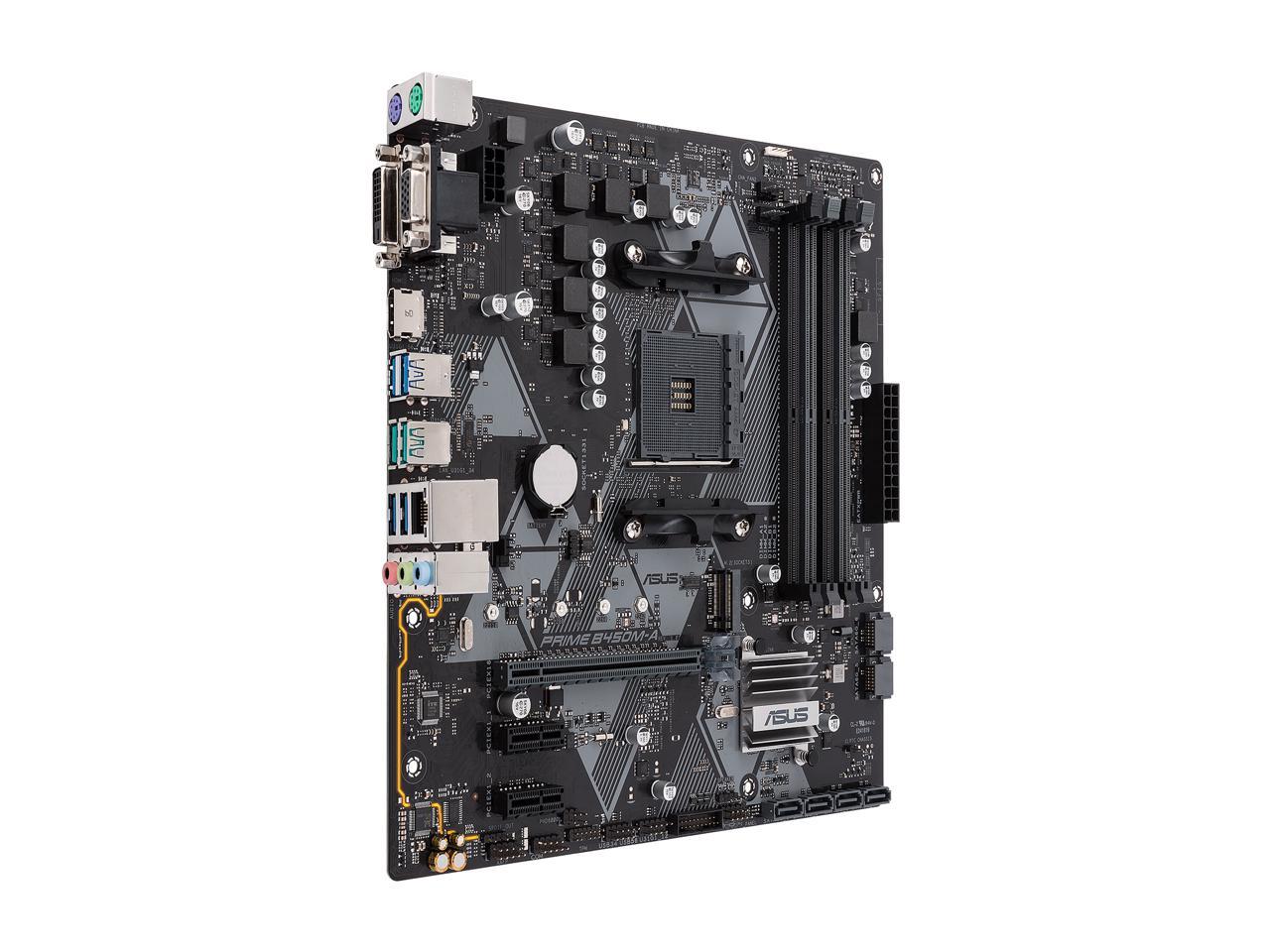 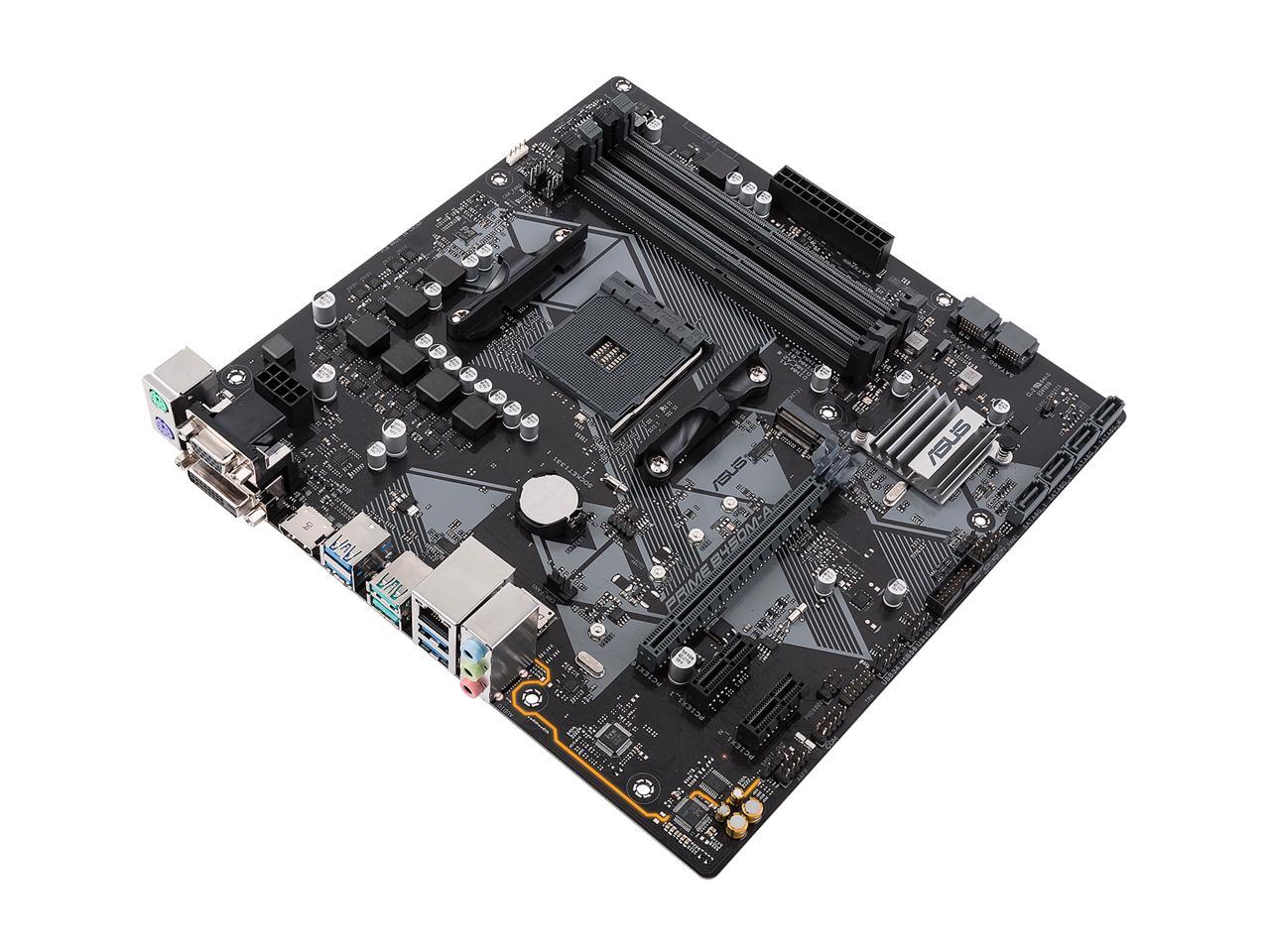 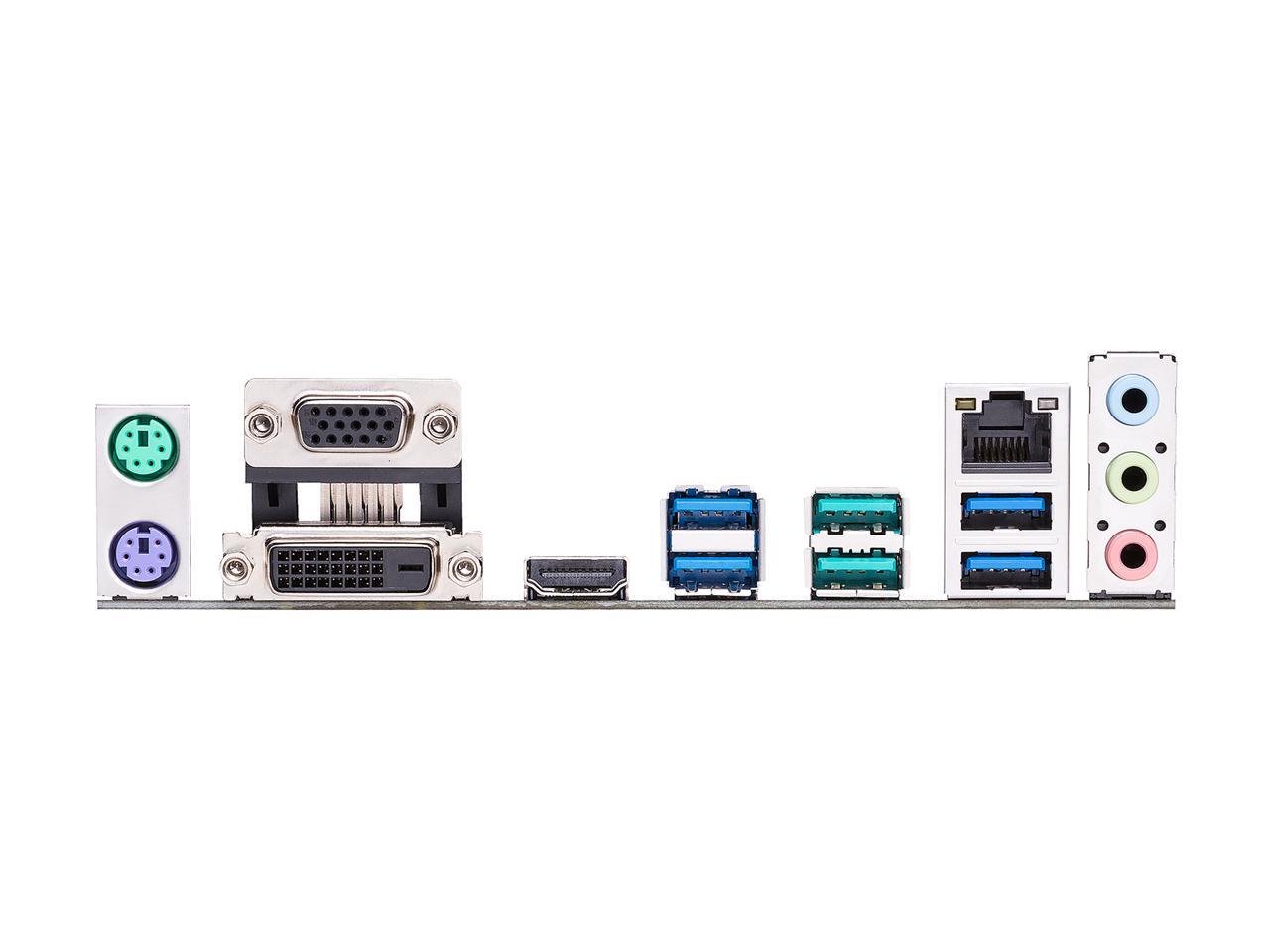 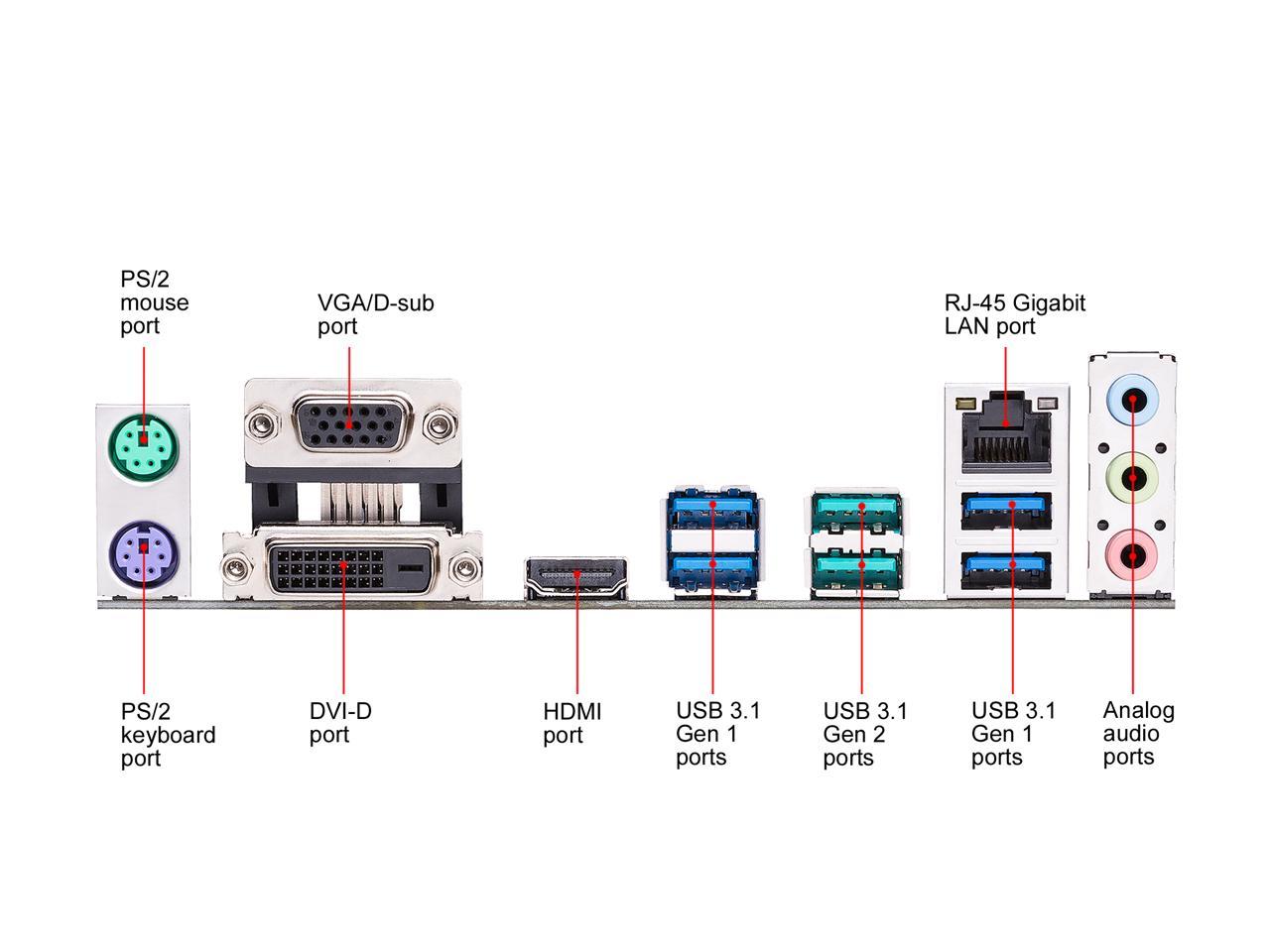 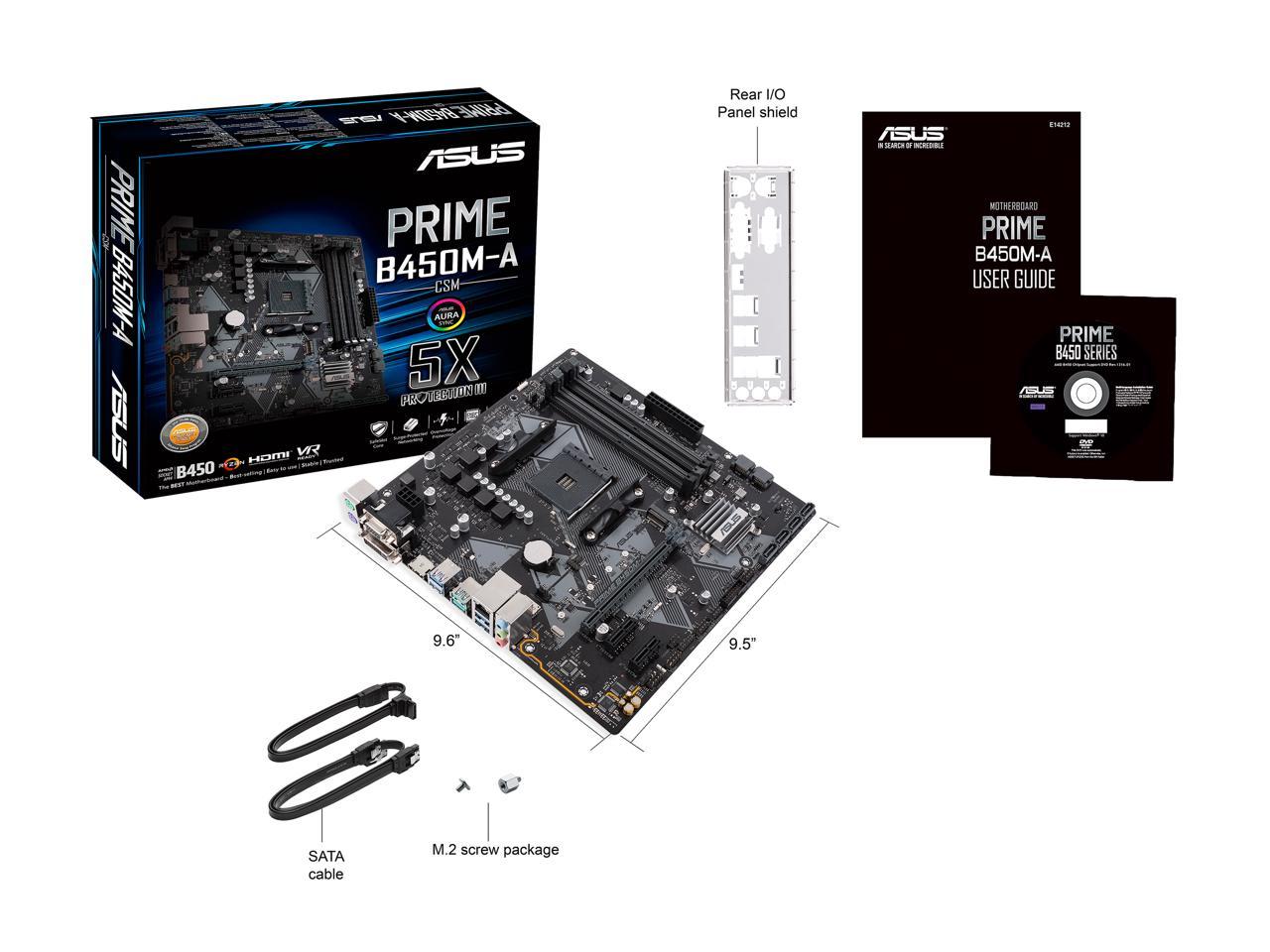 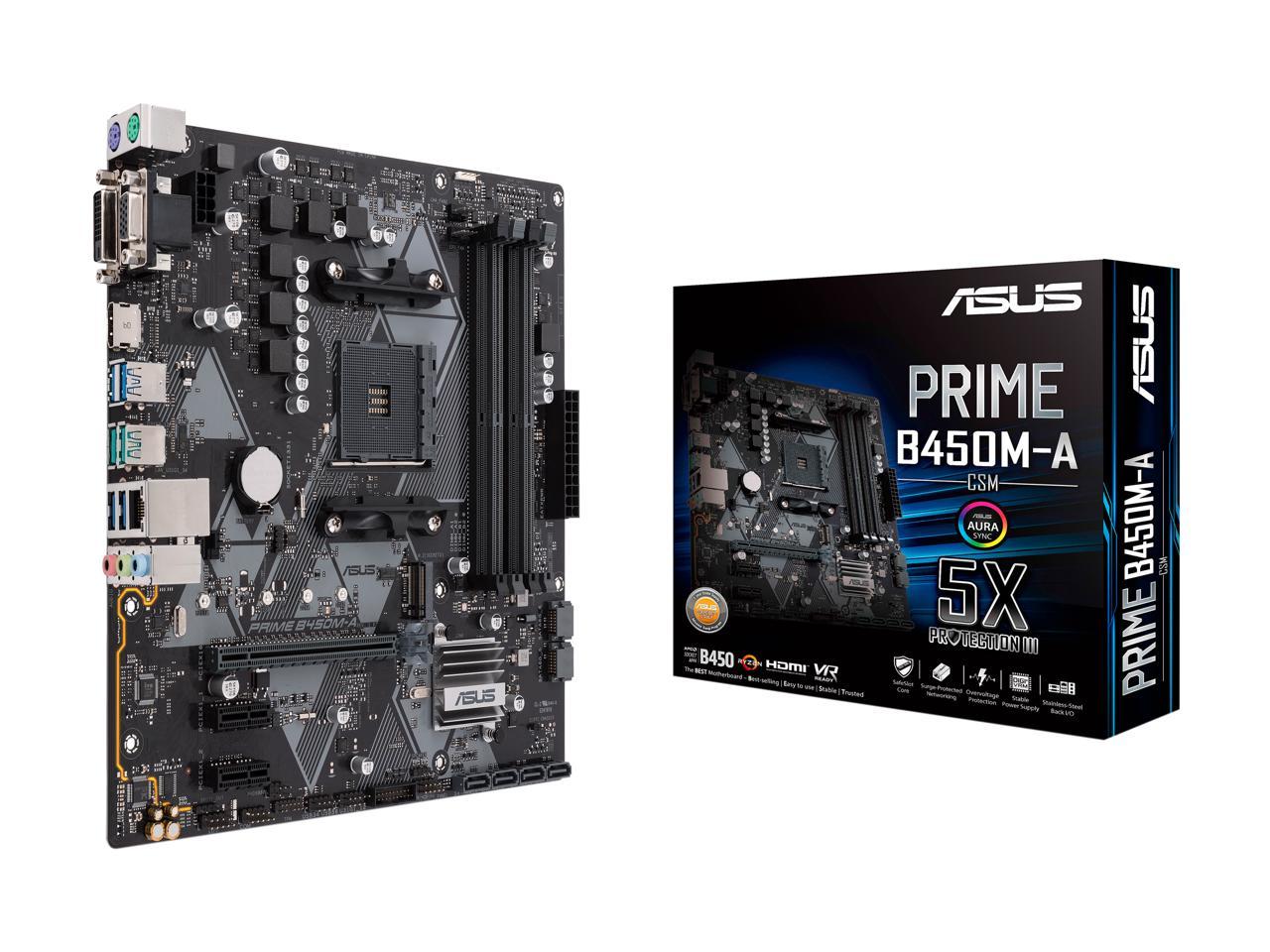 Cons: This is as wide as it gets for a mATX, I was used to smaller motherboards (not a big deal, but I had to change my HDD position). CPU Fan Cooler installation can be a little tricky if you are used to Intel, but after it's attached to the card, it feels a lot safer.

Overall Review: I purchased this product in a combo that included the Ryzen 3 2200G, 16GB (2x8) G.SKILL Ripjaws 2400 and the ASUS PRIME B450M-A/CSM. First of all, props to NewEgg, they replaced my shipment after it was lost (although Fedex said they "delivered" it at home). Now, regarding the performance. I've paired this rig with my 2GB R9 270 (DC2OC) and a Samsung Evo 850, the performance is spectacular for the price, I'm playing WoW over 60 fps with high configurations, and the first game I tried that demands "more" from the rig was Mass Effect Andromeda, it runs excellently in medium configuration (1080p, +60fps). I am very pleased with the Ryzen fan's low to none noise and the temperatures it maintains (around 60C° under heavy load). 10/10 So far.

Pros: - 6 SATA (the reason I picked the board, use all of them) - Good amount of options in bios. No abbreviated hdd names like in my old MSI board. - Booted with Ryzen 3400G out of the box - Runs solid when manages to boot

Overall Review: It booted right up with 3400G, I did not have to update bios. I switched right away to DOHCP/XMP profile in bios for 3200MHz memory speed and it booted fine. BUT! Every time I reboot now is like a roulette. And I am not changing anything in the bios. Sometimes it boots fine, sometimes it double- or triple-boots but still ends up at 3200MHz, and sometimes it does not post and resets to default 2133. Then if I restart again it may boot just fine. Once it boots, it runs solid for days at a time. It only froze on me when I played around with Ryzen Master (make sure to know where the cmos reset jumper is if you do that) and played with SOC voltage. I tried many things. Have the latest bios. But still the same issue. Kind of annoying even though I don’t reboot that often. Good thing I can save bios settings in profiles, so if I need to reset to defaults or clear cmos, I can load a profile with basic changes fast (like turn off LEDs, fan profile, etc). It seems like the board sometimes is not saving some important memory-related settings and has to adjust by multi booting. By the way, the memory is not on the board’s QVL but the board is on the G.Skill’s QVL.

Manufacturer Response:
Dear Valued Customer, Thank you for your feedback. I'm sorry to hear that you are experiencing RAM stability issues with your motherboard, please accept my apologies. This is absolutely not the type of experience we want any of our customers to experience. As you noted, your RAM kit is not on this motherboard's QVL for Ryzen 3000 processors. I recommend replacing your current RAM kit for a compatible kit on the QVL at the rated speed. If you have any general or technical questions, please email me at cl-lane@asus.com and include a link to this review for reference. Thank you for choosing ASUS! Best regards, Lane ASUS Customer Loyalty – US Support
Curtis B.
Ownership: 1 week to 1 month
Verified Owner
Great basic board6/29/2019 5:34:09 AM

Overall Review: Cant get it to post above 2933 memory speed. Tried two different sticks, one verified to work on this chipset at 3200.

Cons: -Light strip is only orange (could clash with your aesthetics) -Using M.2 storage means only 4 SATA Ports available. -Only two fan headers -The two 1x PCI slots can get covered with bulkier graphics cards.

Overall Review: I Love ASUS products, so It was a no brainer for me to look into an ASUS motherboard for my Micro ATX build. The Asus Prime B450M-A is a very nice entry-level board with everything I needed in the form factor: paired with an AMD Ryzen 5 3600 and 3200 MHz RAM and posted with no issues . I used it in a small gaming rig so could make compromises with the cons of the board, as I only run a graphics card on the PCI x16 and used a fan controller for case fans. Overall I would recommend this board to anyone either making their first build or are not going to go too crazy with their build.

Pros: It arrived with the latest BIOS installed.

Cons: -Does not POST. I had read other reviews mentioning this, but thought the price was worth trying my luck. It was not worth the price, and not worth the time. Board with just CPU, cooler, and GPU will turn on LEDs and cooler fan spins. Tested the PSU, all the pins are reading correct voltages.

Overall Review: As stated, fails as a motherboard. Very bare bones, which I was fine with given the price, but it fails to POST, so must return

Cons: After 7 months the BIOS could not be accessed (so you can&amp;#39;t changing the devices boot order). ASUS customer support were unable to diagnose the problem. The board now has to be RMA&amp;#39;d; where it will be repaired and returned in 7-10 business days. This leaves me without a desktop for probably 2 - 3 weeks not to mention the time wasted dismantling the box and putting it back together. I&amp;#39;ve used a range of motherboards over the last 12 years (MSI, Gigabyte, Intel); this is the only one that has failed.

Overall Review: If ASUS stood behind their products they&amp;#39;d send a replacement before asking for the defective part to be returned. An RMA for repair leaves customers without a machine for two weeks which is highly problematic for anyone who relies on their desktop for work. UPDATE The ASUS support person&amp;#39;s suggestion that I remove the battery from the motherboard and power up the machine had and unfortunate (and unanticipated by me) side effect; the default BIOS settings do not include VM support which has to be turned on. So although when I first ran into the issue of not being able to access the BIOS it was problem, but not a critical one, now I cannot run any VMs since VM support has been turned off and I have no way of turning it back on. So the problem is now much more serious in terms of impacting my work. I have also had some very &amp;quot;difficult&amp;quot; interactions with ASUS technical support. Last Saturday I was told I had to return the board; since that would prevent me from working at all I ordered a new one; then yesterday (Monday) ASUS called and said that after reviewing the case, they would send a replacement (nice but a little late since the new board will arrive tomorrow). Today I got another call from ASUS saying that the replacement could not be sent because the "escalated case had not been endorsed" whatever that means, and the board was out of the 90 day replacement window. When I explained the problem (again) the support representative agreed to try to get a replacement sent but that it would take at least a week to complete the internal paperwork and check if they had a board in stock. More updates will follow as the situation progresses.

Manufacturer Response:
Dear Simon R, I certainly understand your frustration and please know this isn’t how we treat loyal customers. Were there any LED indicator lighting up to pinpoint the issue? If possible, give me a detailed description of any specifics in regards to your situation so we can collaborate towards a resolution. You can reach me at cl-adrian@asus.com. Your case for reference is N200215928. Thank you for choosing ASUS! Best Regards, Adrian ASUS Customer Loyalty – US Support