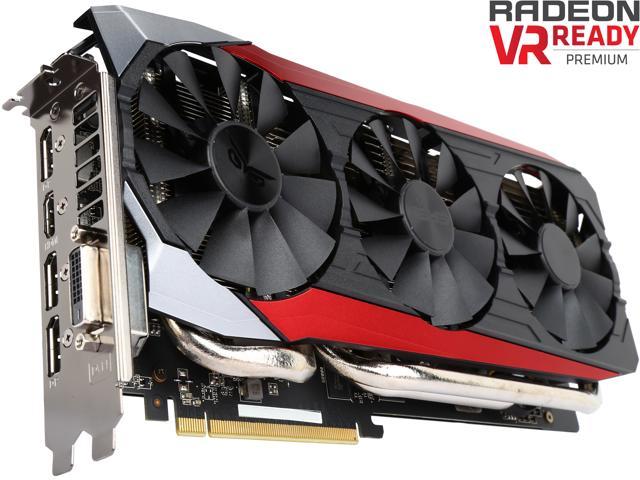 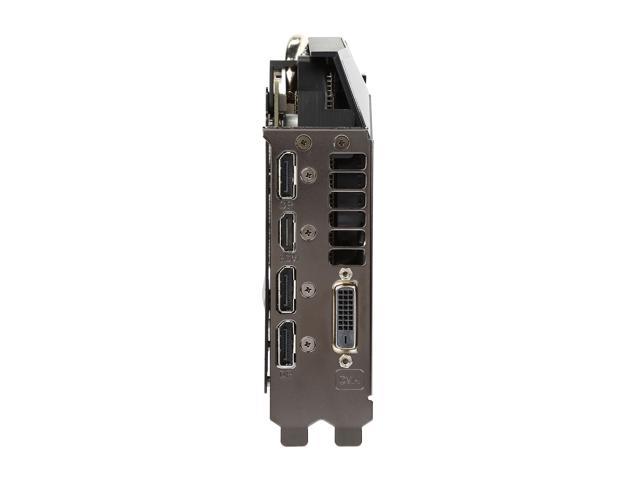 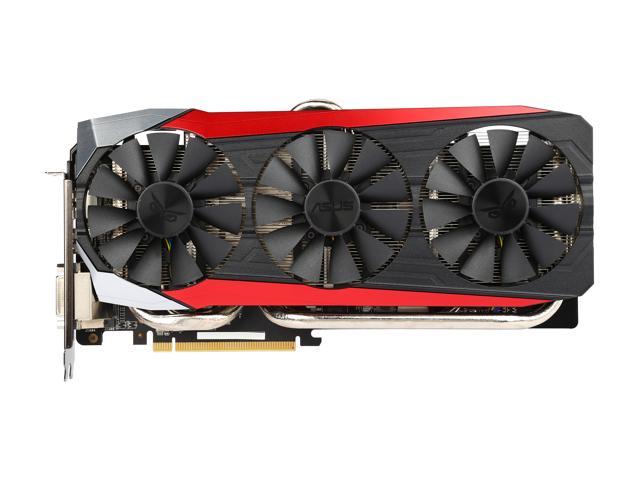 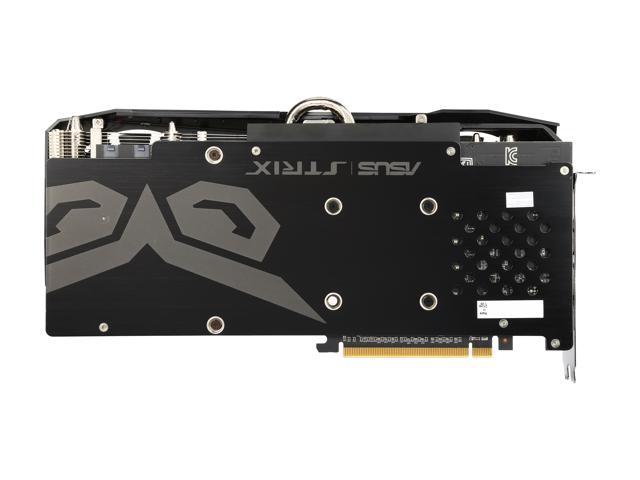 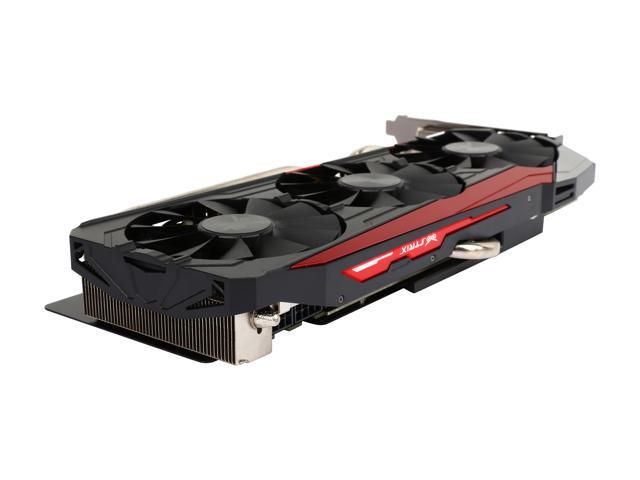 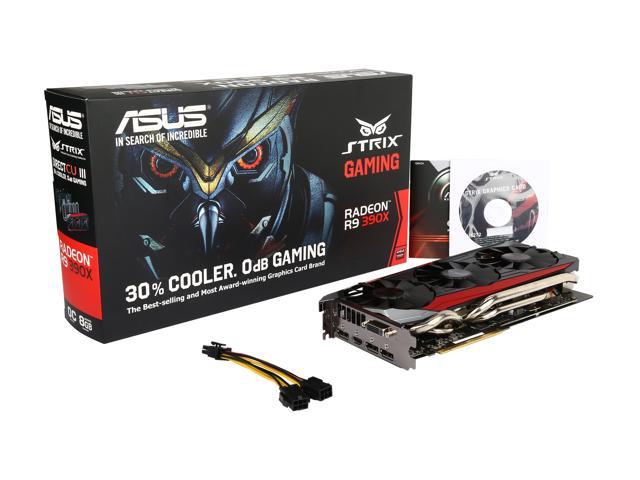 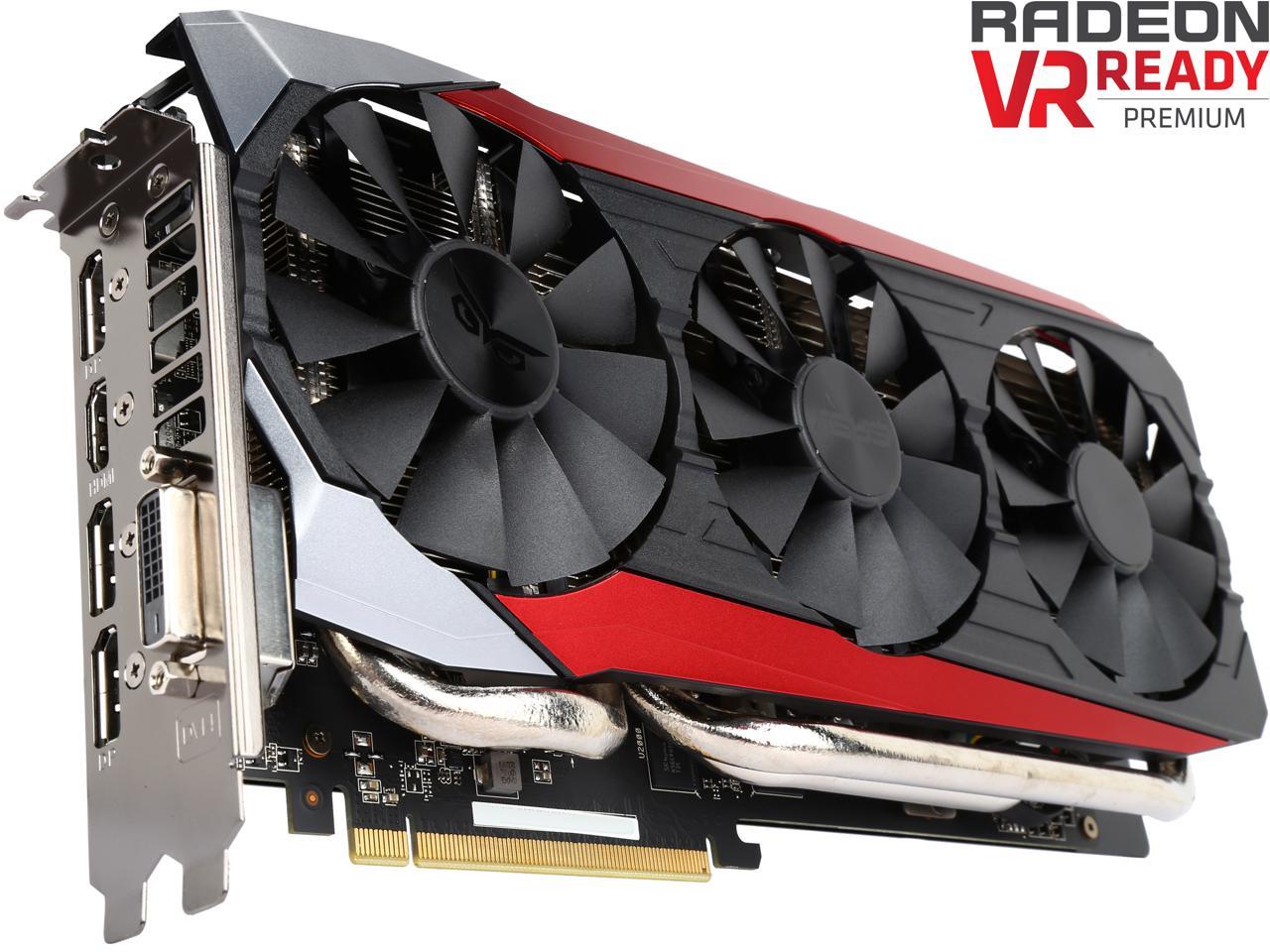 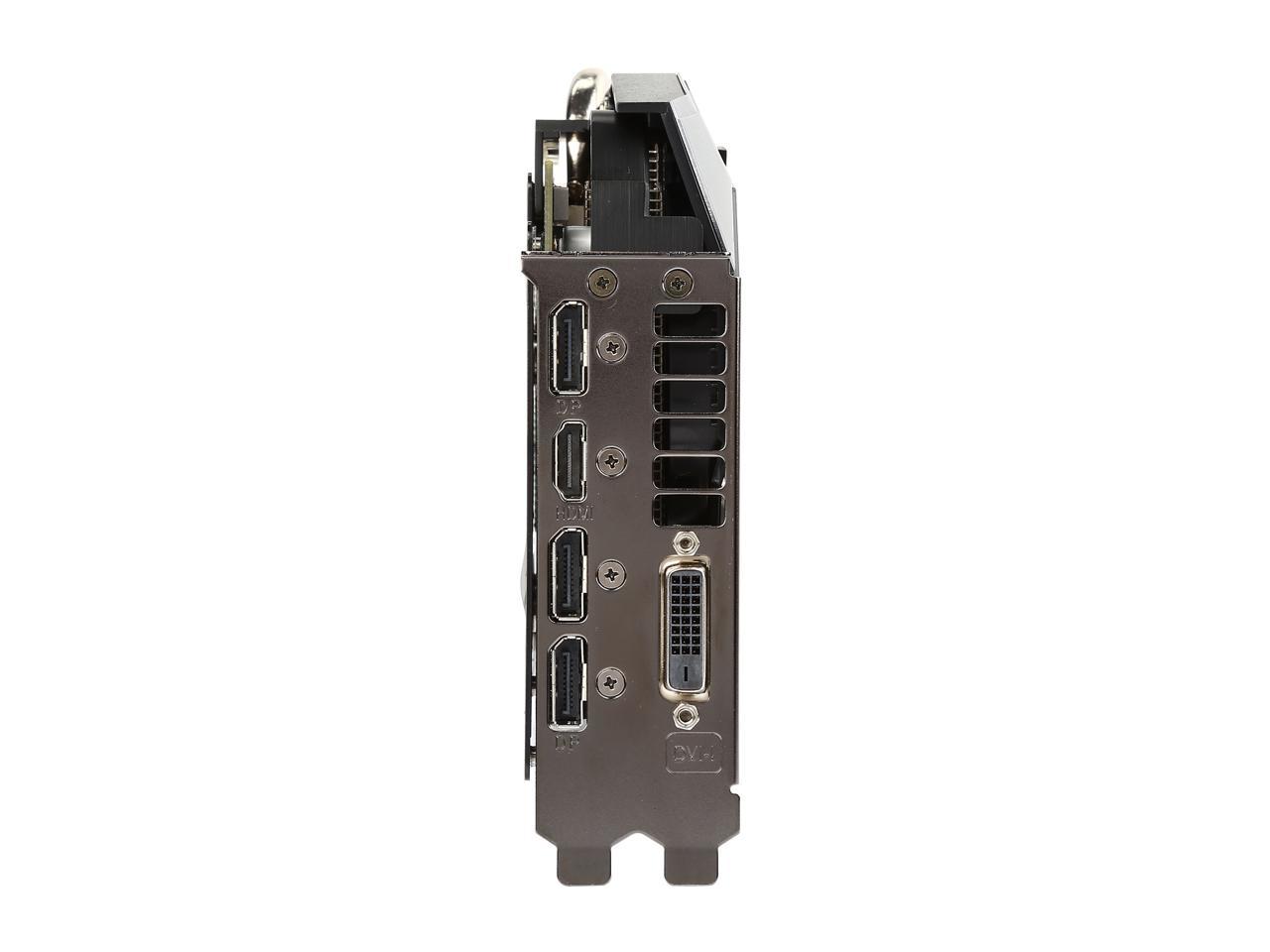 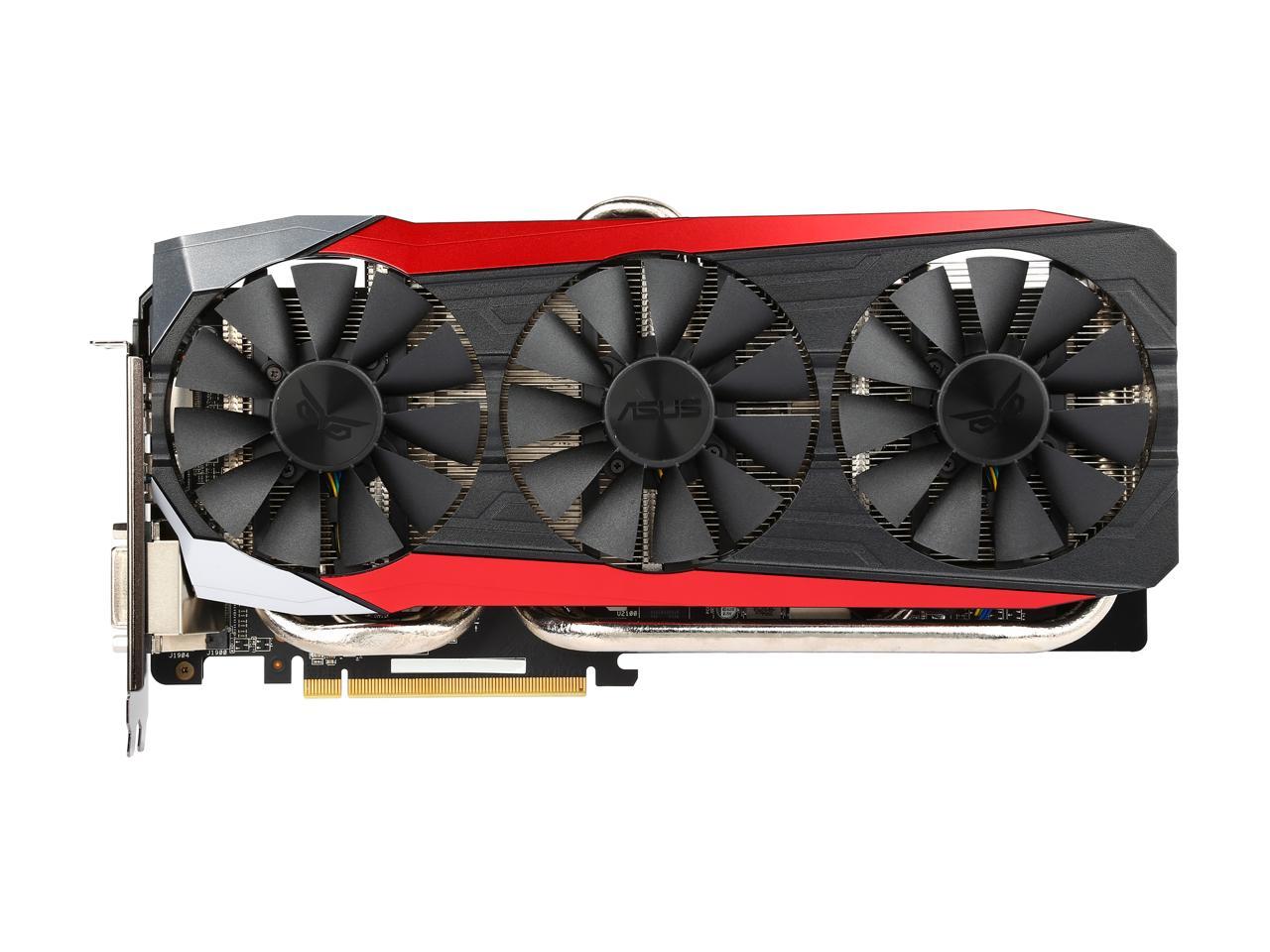 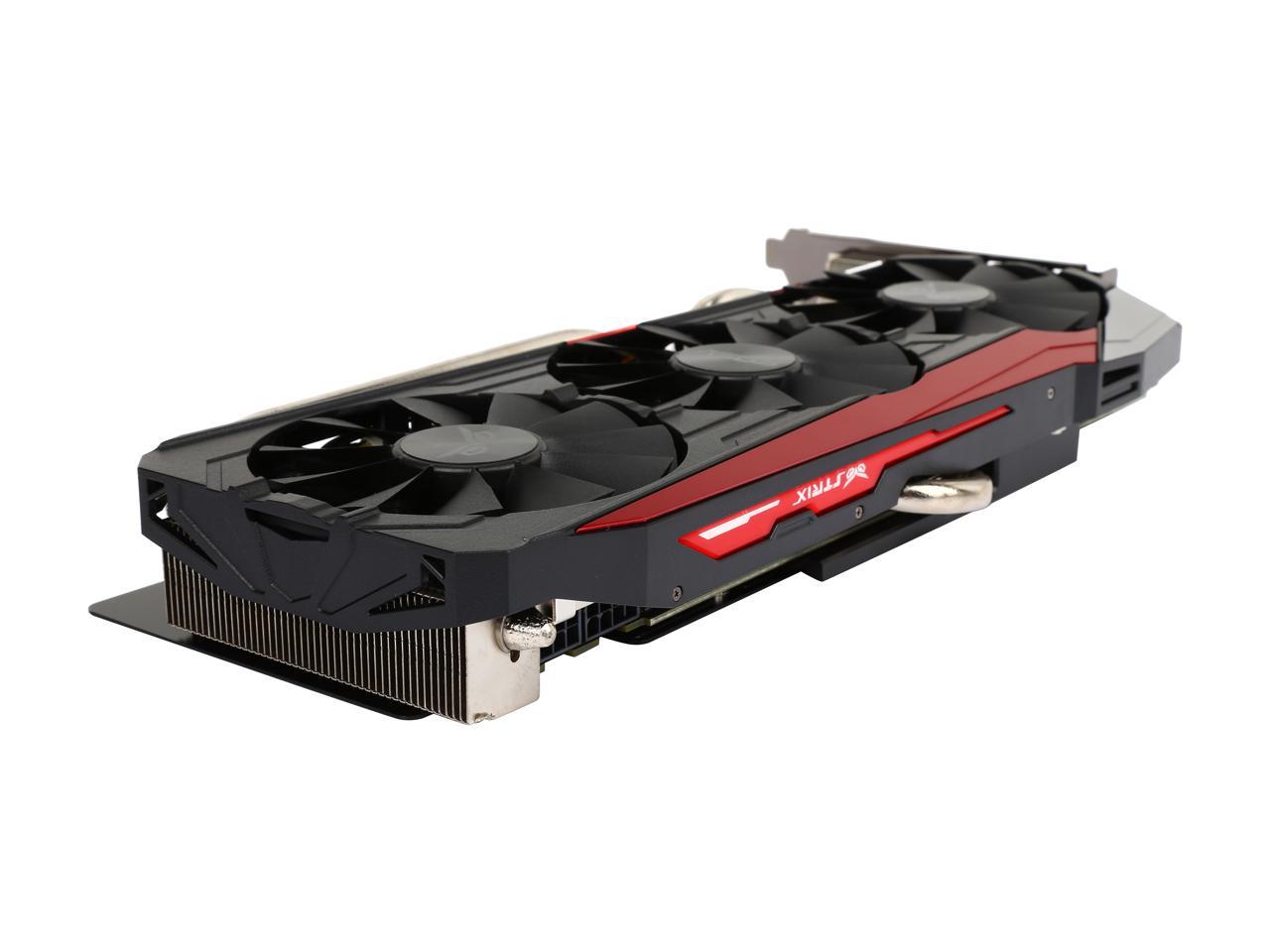 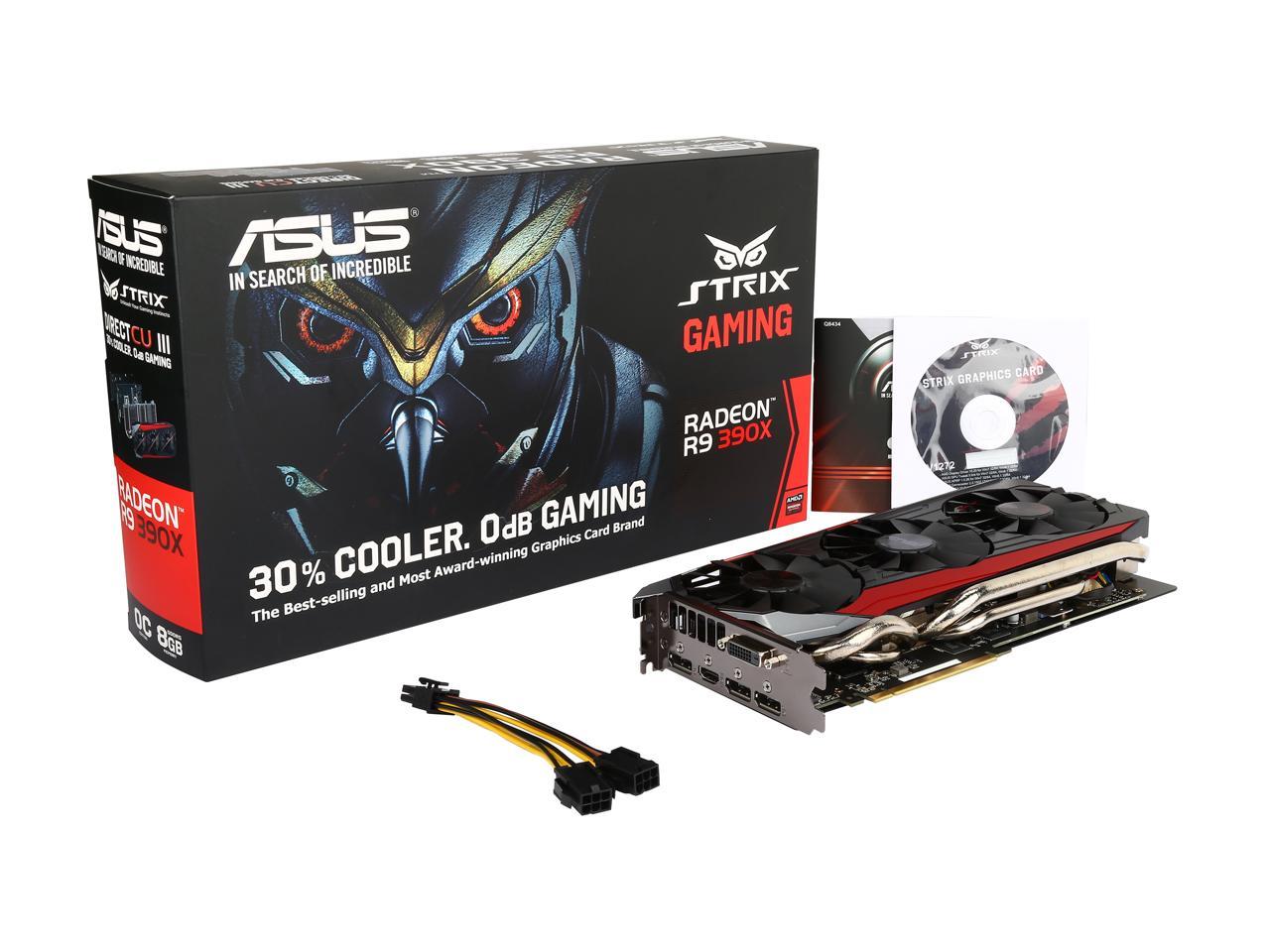 Max Air Flow with 105% More Air Pressure
DirectCU III features triple 0dB fans engineered with a patented, new wing-blade design that delivers maximum air flow and improved 105% static pressure over the heat sink, while operating at 3X quieter volumes than reference cards. The 0dB fans also let you enjoy games like League of Legends® and StarCraft® in complete silence — because the fan stops completely when the GPU temperature remains below a set level*. This makes DirectCU III the coolest and quietest graphics card in the market. Learn more about the ASUS STRIX-R9390X-DC3OC-8GD5-GAMING

Pros: Excellent performance in all games at ultra settings. Fan curve settings keep my card idling at 42 and under load at 62. No matter how long i play, it hovers at 62 C MAX. I installed the latest beta driver 15.7.9 and my performance greatly increased. No issues with windows 10 either. This will do me well until the new video cards from AMD with HBM2 arrive next fall.

Cons: Long card, not necessarily a con, just be prepared and make measurements. In my Antec 900, the front fan HD cages had to be moved forward one screw notch or 1mm in order to fit this video card. literally wall to wall.

Pros: Excellent performance, all my games look really sharp now. So much so that I'm pretty sure I need to get a new monitor or three just to make full use of it. So far this card has laughed (quietly) at everything I've thrown at it. Fans are virtually silent up to 50% speed, and still acceptable up to 70% or so. The included GPU monitoring and OC software (GPU Tweak II) is a big improvement over the Asus Smart Doctor that came with older cards. It was really easy to use to balance the fan speed scale to my liking. By default it prioritizes noise control. It also produces all sorts of useful performance charts.

Cons: Before I start on cons, I want to reiterate I am still rating this a 5. These are more of warnings of potential issues that could arise with this card (but didn't for me) HUGE card, probably worth measuring for. Even in my large case (Antec P280) it comes surprisingly close to the hard drives. Runs fairly warm. I am running a single card, but I'd be worried about dual cards staying cool enough without the fans needing to go well above the quiet range. it can be quite loud at 100%, although the only reason I know that is from manual tuning (for science).

Cons: Rather large @ 11.8" but that's expected with an upper mid-range card. Power hog like all R390X's. It just made my install on my Antec Three Hundred Two case which allows 12.5" video card.

Overall Review: Cooling is not an issue here people. Like Chris H. mentioned with this review on 10/7 Your case needs proper airflow & GPU fan tweaking. Mine runs just fine. I was torn between this & an 980GTX (which was only $15.00 more) on another BF sale. Seems like the R390X trades punches & can exceed the 980GTX. I decided the extra RAM might help down the road & sacrifice some TDP as a trade-off. I purchased the Asus Strix because of several positive reviews online. I'm glad I did as this will serve me for the next two years before the next upgrade.

Overall Review: I have six race games and one flight game. I have all games running in CrossFire with FreeSync on, V-Sync on, @ 144Hz, they all maintain 143.8-fps, even with a full race room (FRAPS benchmark). While gaming, STRIX runs @ 50c/60c on the primary card and 45c/55c on the secondary card, medium/high graphics, static-air setup, cool ambient room temperature. I have two STRIX pushing three MG278Q TN @ 7680 x 1440/144Hz my over-all average gaming temp. is 56c. (ALL HARDWARE MENTIONED I GOT FROM NEWEGG!) #ASUS/AMD ROCKS.

Cons: -The cards is long, it may not fit every case. - Draws more power than the competition (980GTX).

Overall Review: I purchased a new Ultrawide 3K (21:9) LG 34UM95C-P monitor. I quickly realized that my old GTX770 wasn't powerful enough to run BattleField 4 in anything but medium settings. I started to look for a replacement card. I really don't care if I use Nvidia or AMD graphics cards. I keep going back and forth between them. I buy the best deal at the moment. From other users of the LG 34UM95C-P I learned that GTX970 just barely was able to run BF4 at high resolution, so I set my sight on a 390X or GTX980. Both cards perform about the same when running a high resolution monitor so it came down to price and during Black Friday the 390X was hard to beat ($340). I have to say that I am very pleased with my AMD R9 390X. The build quality is solid. The card runs completely silent except when you play games only then can you hear a little humming from the card but not much. Overall I am very happy with my card. I can run BF4 maxed out on my new 3K Ultrawide monitor. BF4 has never looked so good 

Overall Review: Another con, though by no fault of ASUS, is the lack of a bracket adapter for liquid cooling. In retrospect, I could have bought a similar card, which allows for liquid cooling, for similar cost and performance. But I am still quite happy with this purchase and just hope for a bracket at some point in the future.

Pros: When I was actually able to get through a few minutes of playing games. It ran them lovely. Without a sweat

Overall Review: I'm not sure if there is an incompatibility issue with windows 10, but I've tried everything. and did so much research trying to find an answer to my problem. I tired updating the drivers. uninstalling. Reinstalling. Doing a clean windows 10 install. down tweaking. And even tried installing old software to see if that was the problem, but none of it worked. I tried using MSI afterburner to see if maybe GPU tweak 2 was the problem, but again I was wrong. I can't even get through 5 minutes of gaming without my pc crashing. I even get stuck on BSOD boot loop. and yes. I can't count how many times I tried the BSOD boot loop fix. None of it worked. I'm able to use my old nvidia card without any problems. No crashing what so ever. I'm stuck not knowing what to do. Its too late for me to try and RMA, but it's not like I'll be able to because I already sent in for a rebate. I can't win! I wonder if anyone else has this same exact problem!? HELP!

Manufacturer Response:
Dear Alex, Hello, I would like to thank you for taking your time in writing this review. We certainly value your feedback. It is unfortunate to hear that you are experiencing crashing with your video card. Do you only crash when you playing video games? What temperature is your card running at under load? Looks like you have attempted a clean reinstall of the drivers to no avail. If you're interested in an RMA, you can submit an RMA at http://www.asus.com/us/support. ASUS offers 3 year warranty on our video cards. If you have any questions or concerns, feel free to contact me at cl-justin@asus.com and I will help you to the best of my abilities. I'm here to assist our customers with our products and dedicated in bringing a resolution to all issues that they may come across. Your case for reference is #N160527380 Thanks for choosing ASUS Regards, Justin ASUS Customer Loyalty
george f.
Ownership: 1 week to 1 month
Verified Owner
Performs well, esasy tweak, runs HOT!, fans loud12/26/2015 8:10:41 PM

Pros: - I have an ACER 34 inch curved monitor, running at 3440 x 1440 at 75 GHZ - Performs well under the resolution while running every game at ultra ... - GPU Tweak II allows full control and customization to clock, voltage, memory, fan speed and power target

Overall Review: - I am a bit on the fence on this - I spent roughly $375 on the card and am not disappointed, but I m not sure I would recommend this card - At almost $400, I might have spend another $100 to get the Fury series if they were to perform well at cooler temperatures

Manufacturer Response:
Dear George, I would like to thank you for taking your time in writing this review. We certainly value your feedback. It is unfortunate that your video card is running extremely hot. What temperature is your card while it is IDLE/LOAD? It looks like you are using GpuTweak to adjust the fan speeds. Is it helping with the temperature? If you need any further assistance, feel free to contact me at cl-justin@asus.com and I will help you to the best of my abilities. Your case for reference is #N151291032 Thanks for choosing ASUS Regards, Justin ASUS Customer Loyalty ​