Feel 100% satisfied with your purchase -- with no restocking fees & no return shipping costs* within 30 days of delivery. Learn More
Price Alert
Add To ListFound on 338 wish lists 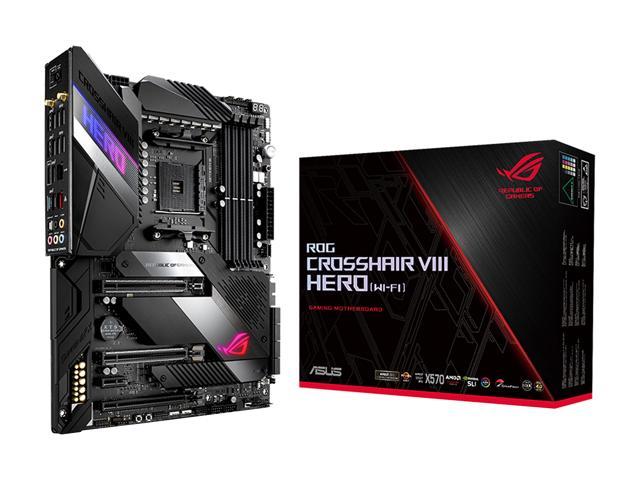 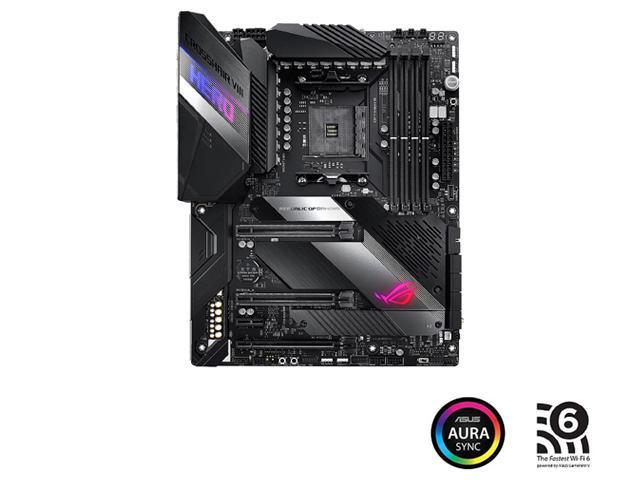 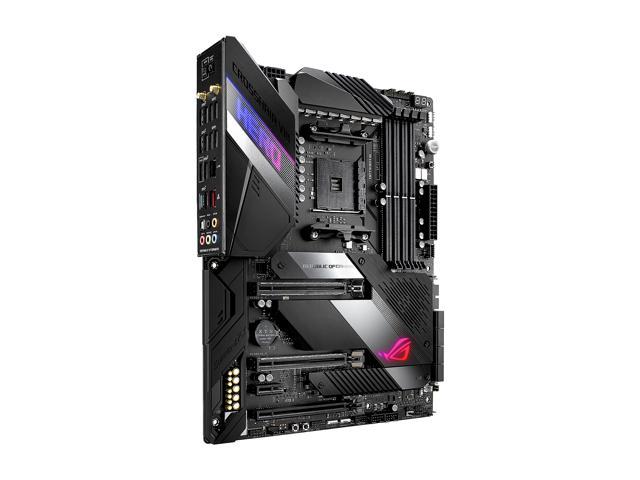 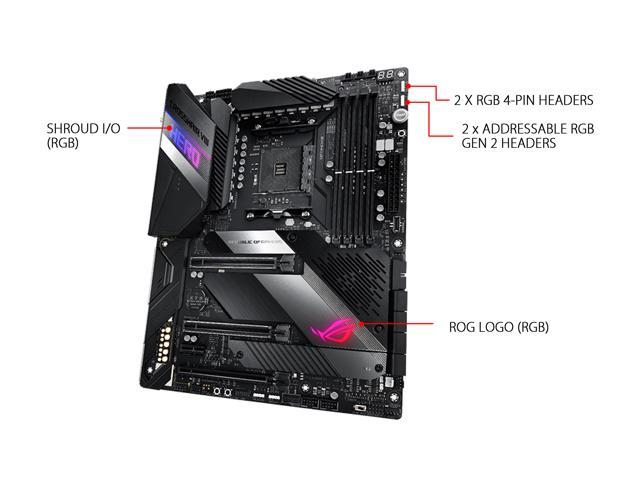 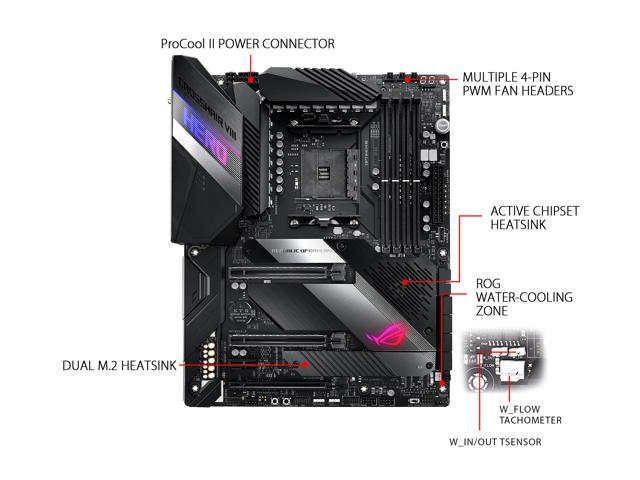 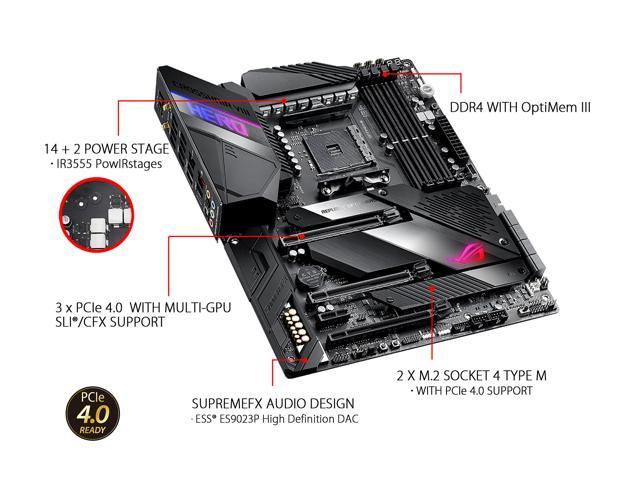 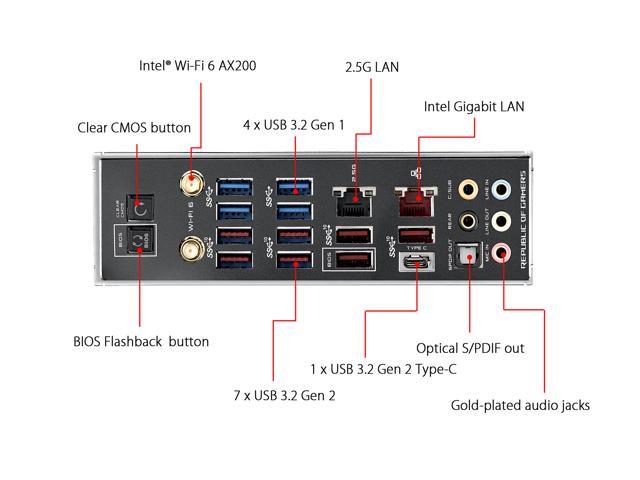 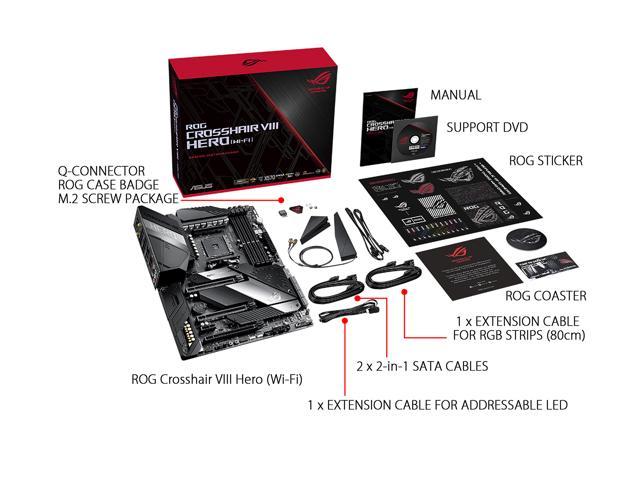 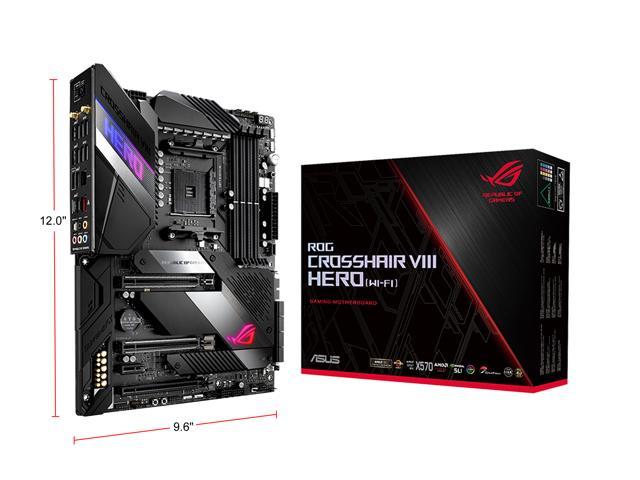 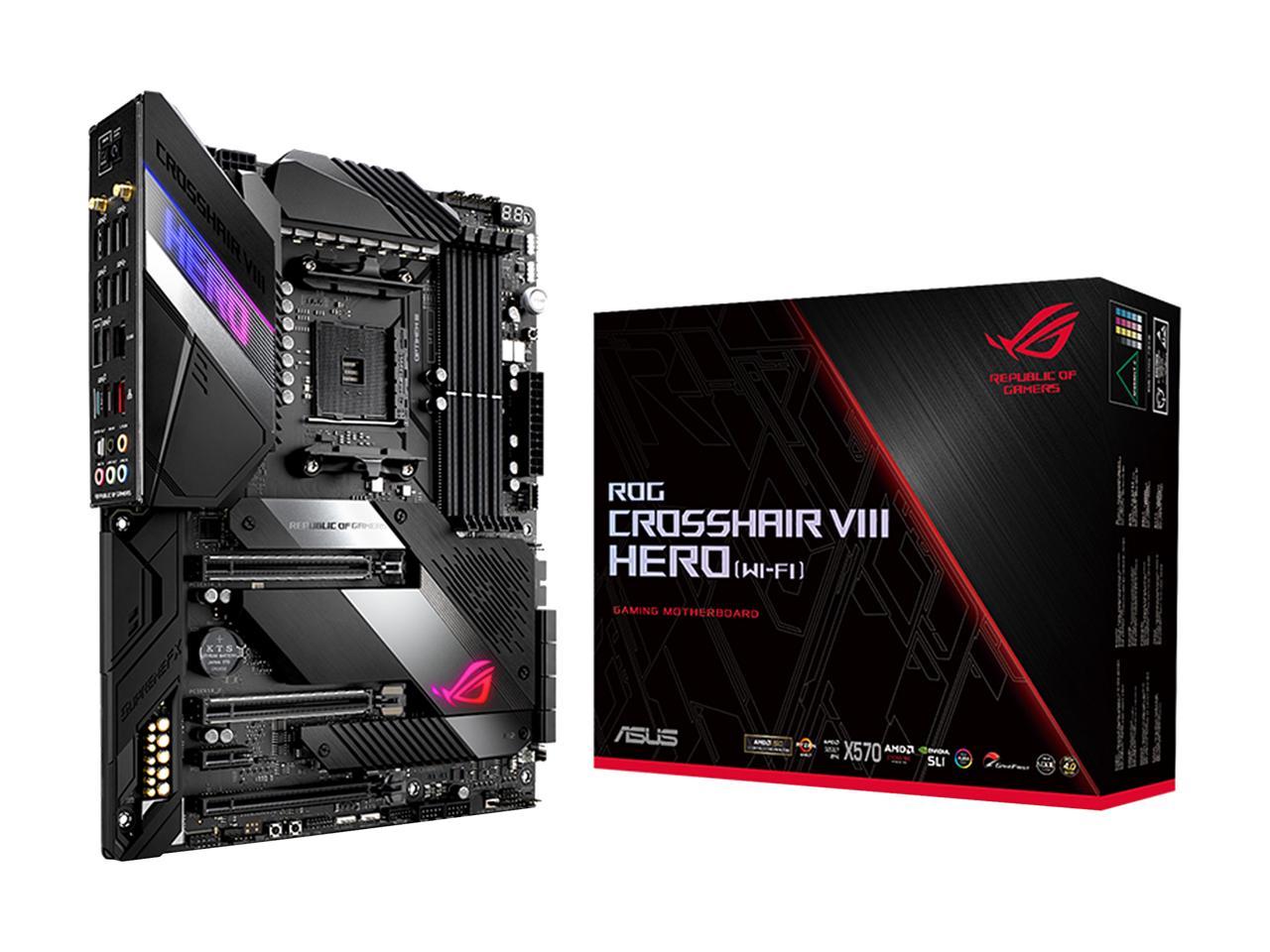 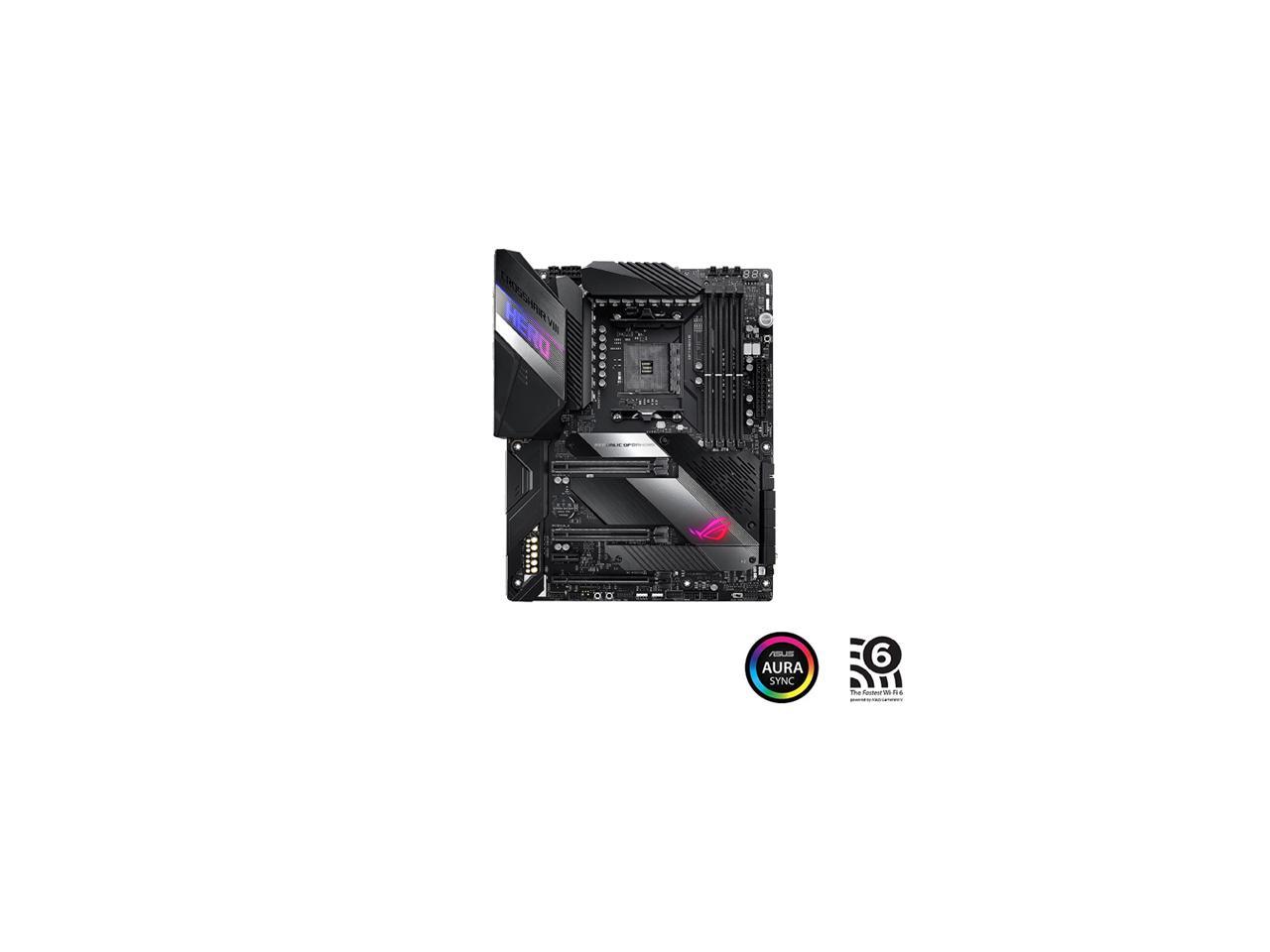 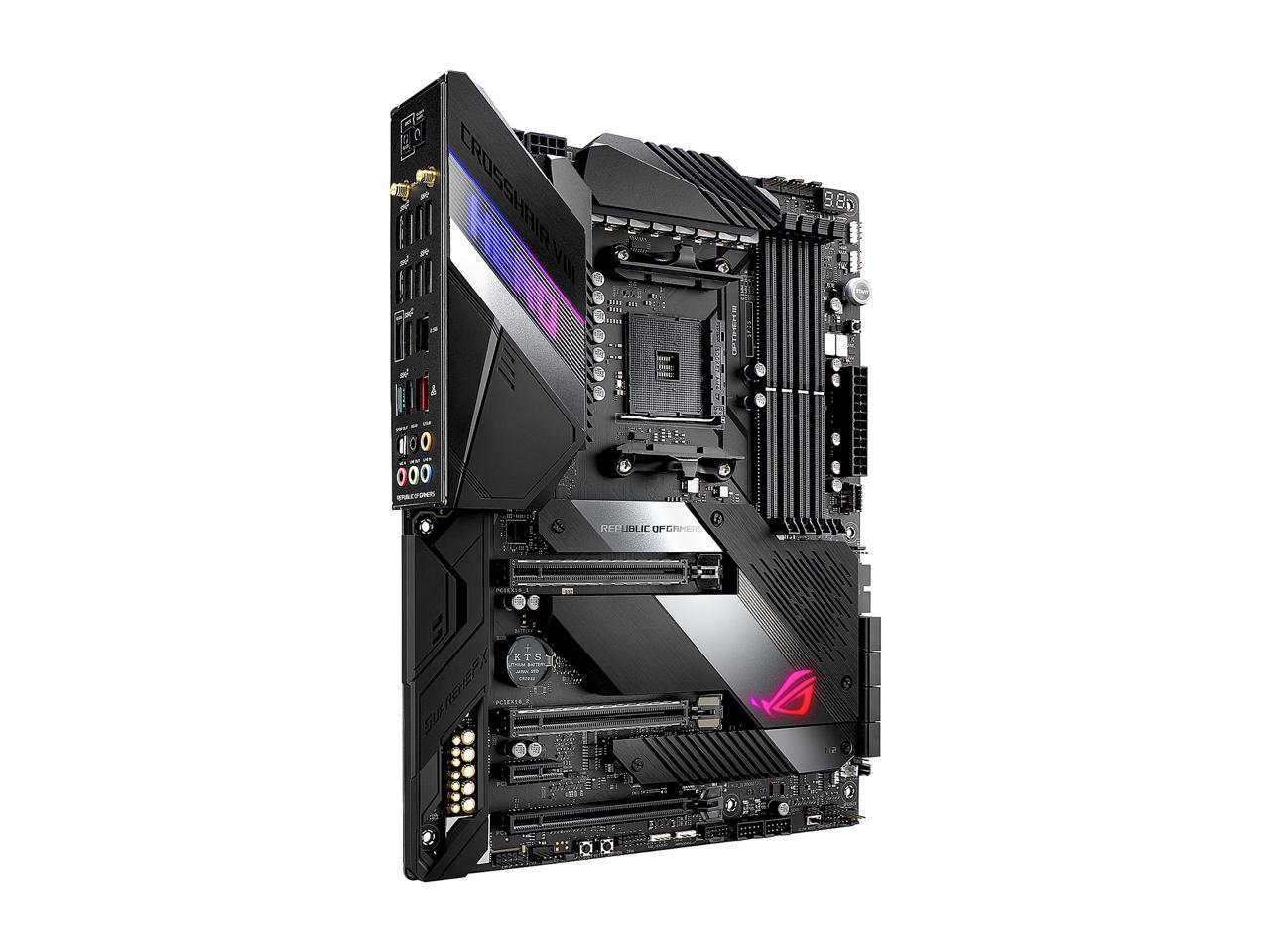 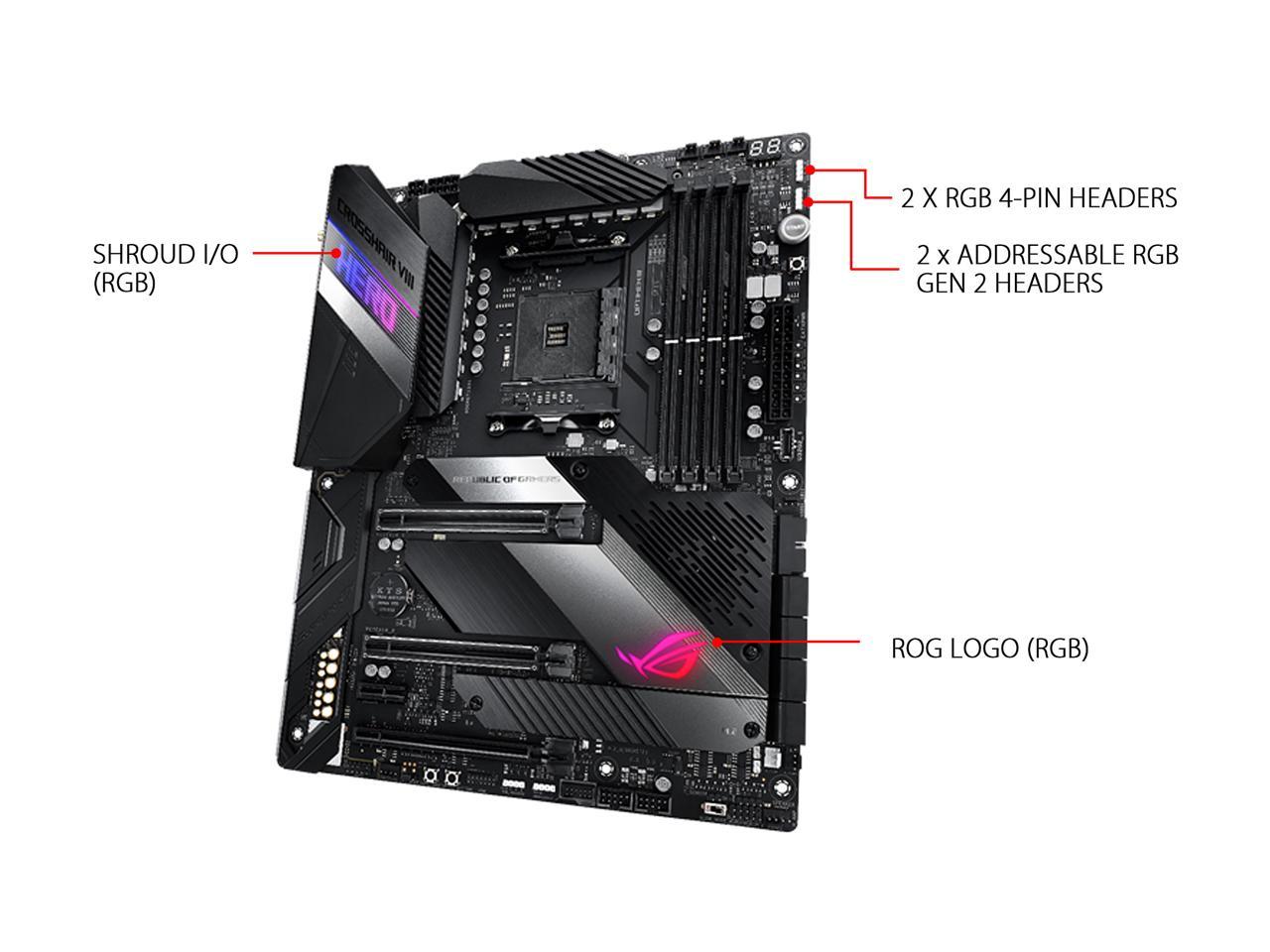 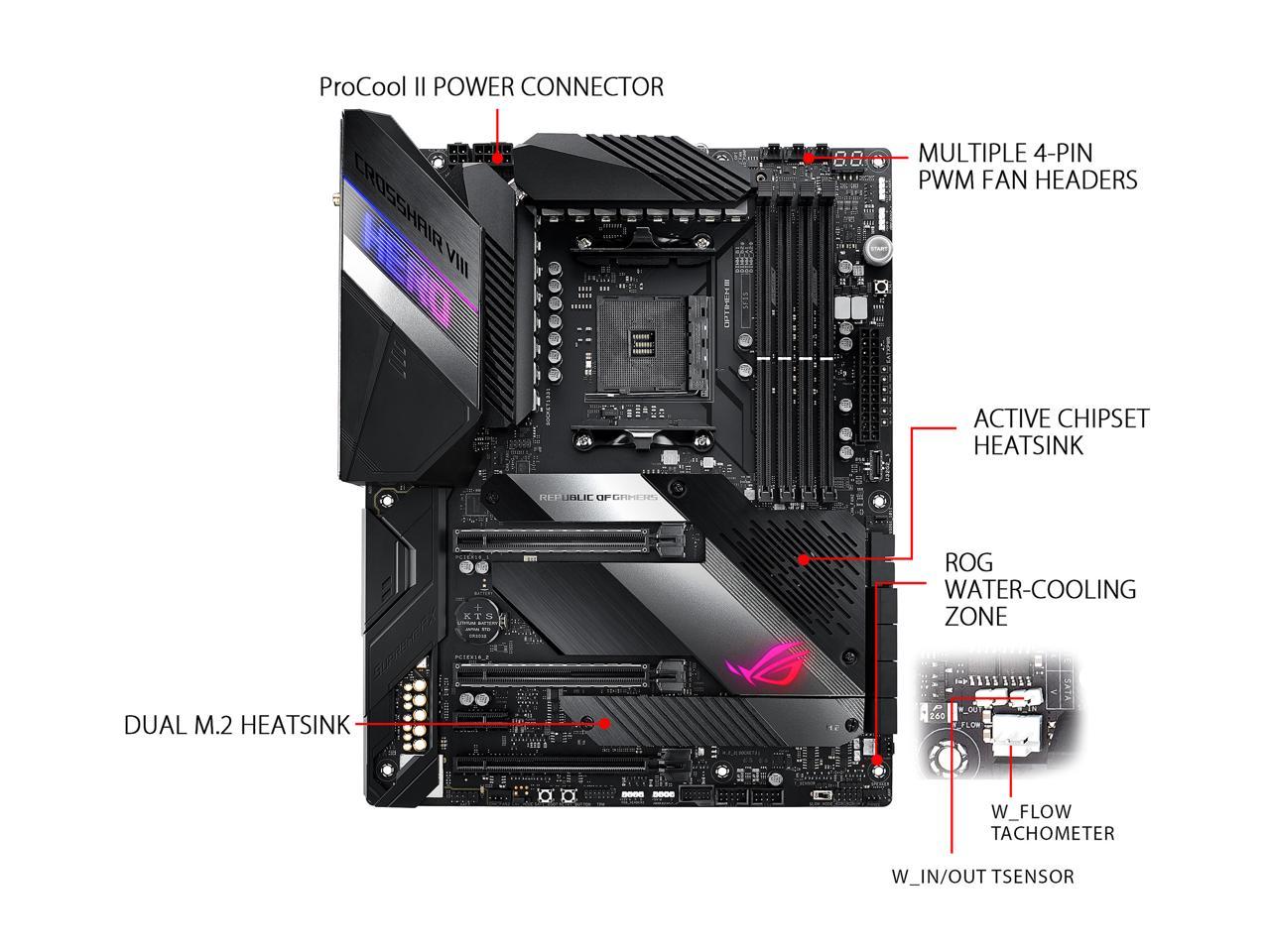 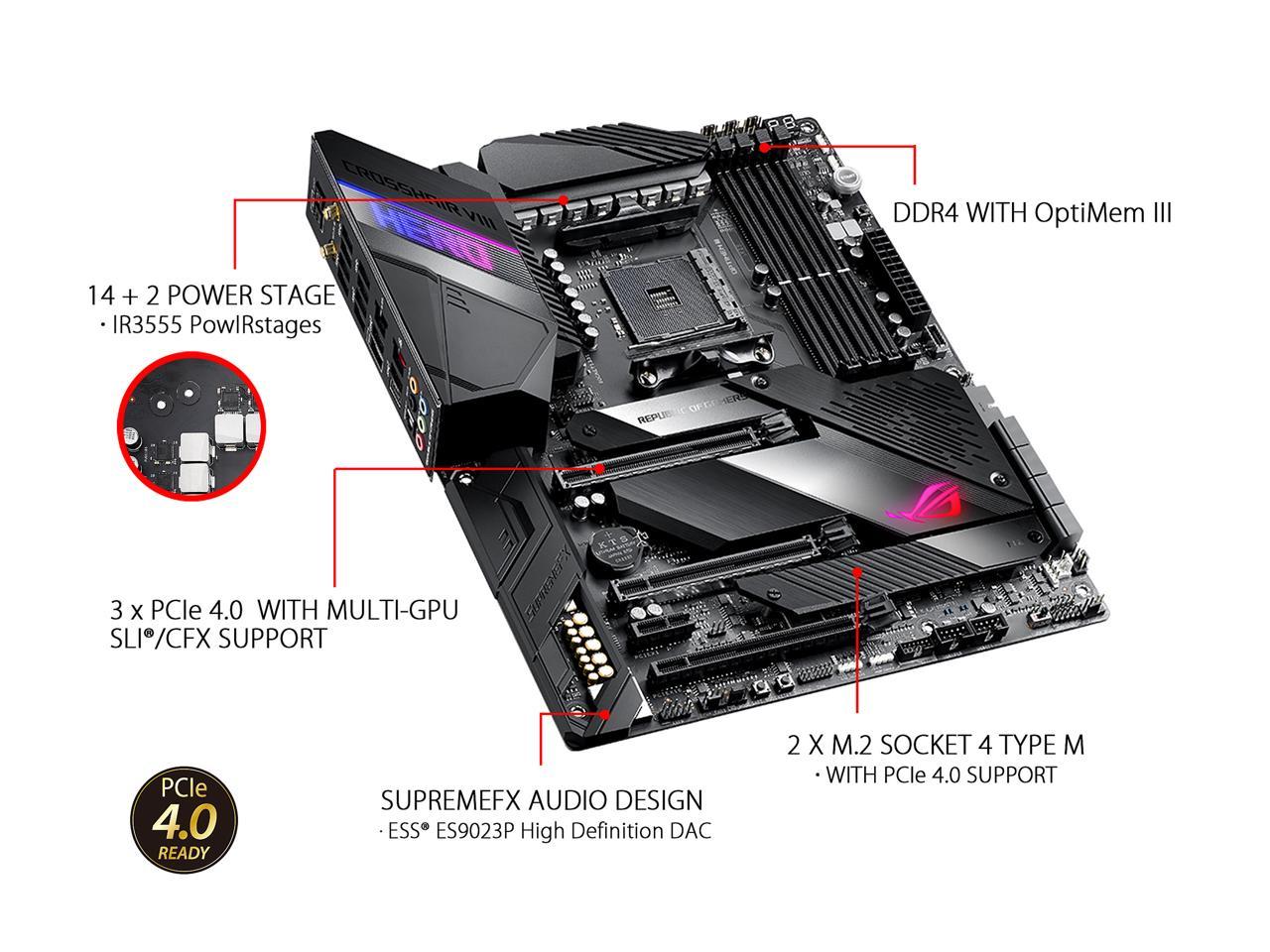 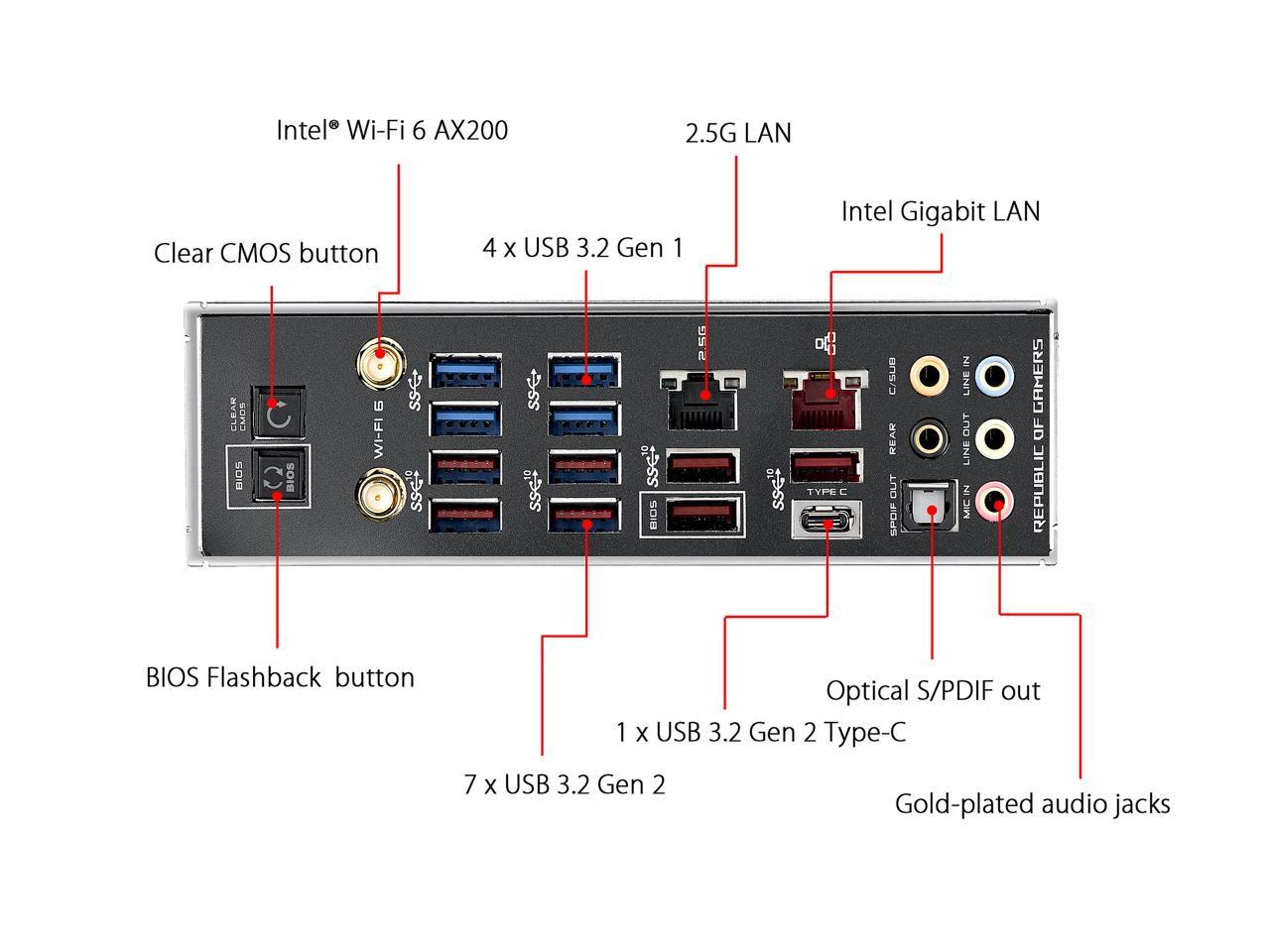 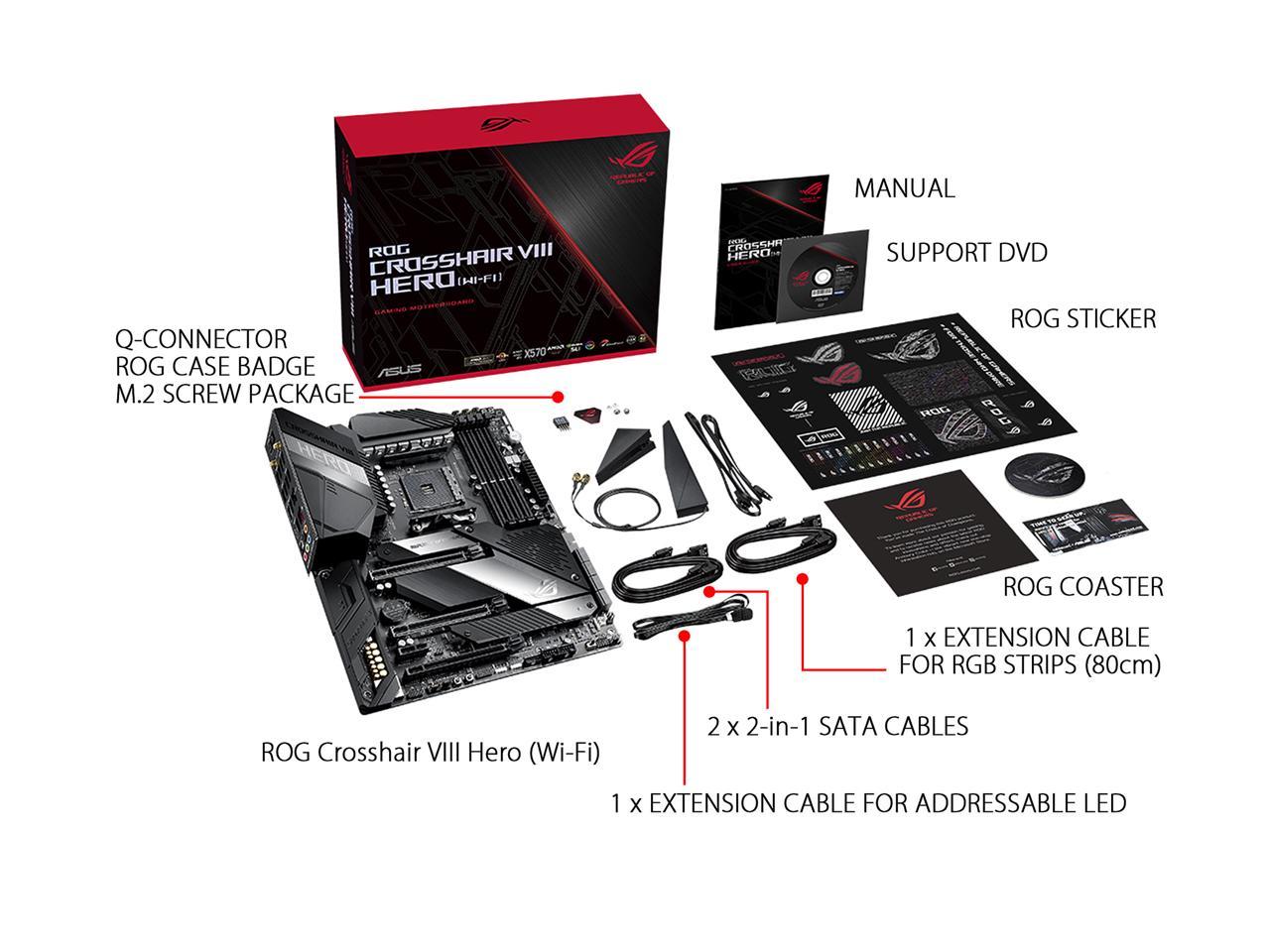 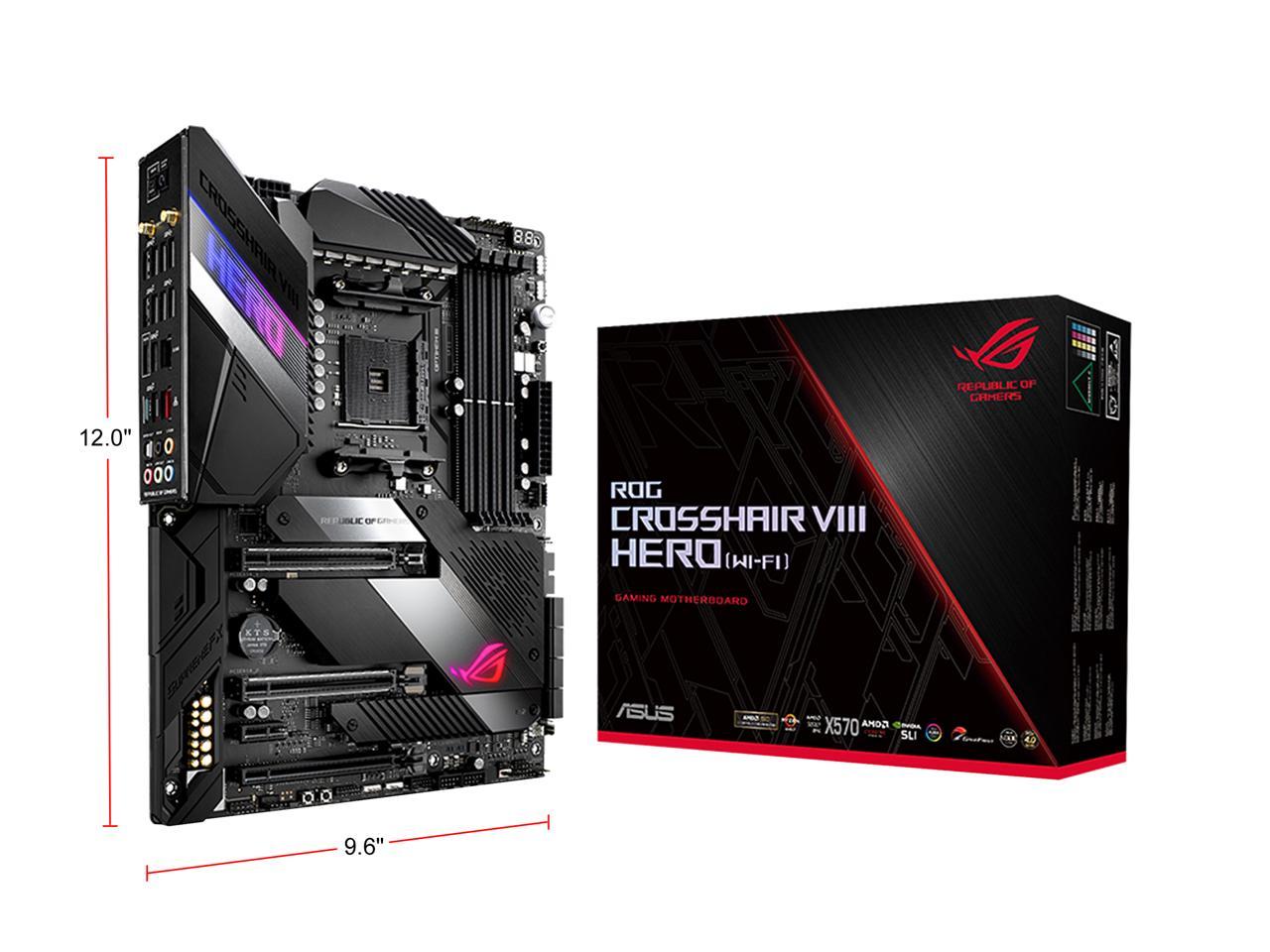 Cons: Active chipset cooling -- not a fan of these fans as they tend to go out over time. This is something I've heard is less of an issue on the X570 chipset given it only spins up when temps rise. Regardless, in 20 years of system building I have yet to see a chipset fan outlast the board. Board didn't post at first -- typical when running very high performance memory. To resolve, I pulled out all memory sticks but one, cleared the bios in the back and fired it up without issue. Dialed in the correct timings and voltages for my memory and then plugged the other sticks back in without a hitch. As I mentioned before, this is pretty typical even with vendor validated memory. I could see this being a con for people who don't have experience and think it's a DOA board (post code wasn't listed in the motherboard manual for C5). When using nothing but NVME M2 drives, the bios config isn't as straight forward for loading a UEFI dependent OS. Motherboard drivers on CD/DVD? It's 2019 -- USB key, please! Extra credit for having all storage drivers ready for a windows 10 install.

Overall Review: Have been using ASUS since the P2B. Had a few shaky experiences with them in the past few years where other boards appeared to offer superior experiences. Despite this, I chose to run with ASUS for my first AMD build since the Athlon 64 days. My confidence is completely restored. The out of box experience was fantastic -- really exceptional quality and straight forward options. The board appears to be really well engineered, and I had absolutely no problems. I would like ASUS to improve the manual in three areas: - Memory configuration / First post. - - - Someone with experience will do what I did. But someone new to building a PC might have a poor experience which may have been avoided with a little additional documentation. This would clearly lose ASUS a customer for life which is never good. - NVME configuration when M2 drives are exclusively used. - - - I found myself bumbling around the BIOS until I sorted it out. - Motherboard drivers offered on USB - - - Increase your price 5 dollars and include a USB drive in addition to the CD. For those of us who have abandoned DVD drives, it really is a turn off to have to go to your website on a separate system and prepare a flash drive with storage drivers to install windows.

Pros: Great features, including support of PCI-e gen 4 devices. Very good board if you are really into overclocking [which I'm only a beginner at].

Cons: Price. There's also some bugs, but they seem to be in common with many/most boards with 3000 series processors, and not specific to ASUS. It's going to be a few weeks while they get some of this stuff sorted out, so be advised that if you're an early adopter of the 3000s you may run into some troubles. I think it might be easier to run those on the x570 chipset boards, even though they can also run on previous chipset boards, and are still a little buggy even on the x570s.

Overall Review: I've been building computers since around 1990, and this is the most awesome build I've ever done. Everything went well, with no major problems. Using this board with the 0702 BIOS, Corsair 3600 speed memory, a Gigabyte gen 4 NVMe drive, a Sapphire Nitro+ Vega 64 and a 3900X processor, the system is a dream. I'm only running the processor as stock, with a couple of auto overclocking options [PBO and another one] turned on in the BIOS, so it's not running as fast as the advertised max boost yet, but that may improve over time as the manufacturer and AMD make tweaks to the BIOS. The board and this processor will work fine with memory speeds up to 1800Mhz. What you do is set a setting to use DOCP in BIOS, and set speed in that drop-down to 3600 and the FCLK speed to 1800 to match it. Sounds confusing but memory is running dual-channel at 1800, so it's called 3600 speed. You can get faster memory, but it seems that at the moment, this board and chip combo won't run well if you set the speeds above that. Setting it to one setting just below that might work even better, or so I hear on r/amd. I'm seeing people complaining on r/amd about this board and some other Asus boards, but I'm having a much better time with this one than my two previous ASUS AM series boards [Gen 1 Ryzen and before]. Very glad I got this and was able to get one of the 3900Xs so quickly. Highly recommend, and also highly recommend that you browse around on boards like that r/amd Reddit board to get an idea of tweaks and stuff you can do to make it perform a little better, and how to set the power settings to work around a bug affecting most users of the 3000 series Ryzen processors where voltage stays high all the time. I seem to be having a much better time than most other people with this. I think I got lucky with my combination of hardware, plus knowing in advance a few settings to change to make things go a little more smoothly, thanks to that Reddit board.

Pros: Longtime fan of the ROG Crosshair series. Lots of functionality, even if you don't use all of it. Software automatically updates drivers/software once installed. Packaging is 11 out 10....

Cons: Some interference issues with video cards (see below) No slot for older cards (sound cards) but this has most everything built in.....so Ordered from 3rd party......Newegg did not have correct status of the items in their system. Not worth an egg and its not product related, but worth mentioning. Don't trust the status of your 3rd party purchases in Newegg. This board still says "In Processing" as I type this using the very motherboard in my system.

Pros: -So many USB ports -Solid overclocking performance -Really lives up to the marketing

Cons: -Alot of features you probably don't need for a daily driver

Overall Review: Bought this to pair with a 5900x that I was planning on doing some minor overclocking to. Everything plugged in and was good to go with no real issues. The only problem I ran into was that the board doesn't automatically stop looking for a CPU fan when you have an AIO. Took a few angry reboots before I actually read the error message and turned off CPU fan reporting in the BIOS. Works like a charm ever since

Pros: -Very high quality VRMs, perfect for 3950x. One of the best price to performance boards you can get, according to der8auer. His 3950x simulated VRM test is what lead me to this board. -POST on the first attempt with an AIO (had to set the BIOS to ignore the CPU fan) -WiFi allows wireless controllers and bluetooth without any additional hardware -M.2 slots run at spec, and the armor seems to keep them at reasonable temps -Everything necessary to the build was included, as expected -ASUS provides the latest drivers on their site, everything is updated and running fine -More USB than i'll ever need. I'd trade half of those to get another USB 3.0 front panel connection -The pinout adapter is one of the most convenient things that i wish existed for longer than it has -PCIe 4.0 i guess is worth mentioning, if you're new to x570

Cons: -I got a case with 4x USB 3.0 front panel, and this motherboard just has one 20-pin connector. I knew this coming into it, I just planned to get a PCIe adapter or something in the future if i ever needed it. -Kraken x62 and my higher profile RAM forced me to flip the coldplate and turn the NZXT logo upside down - appropriately upsetting Linus and Kyle. I'd like it if the memory could be moved a bit further from the CPU socket, as i only needed a few cm.

Overall Review: I've had this build for a week, and the board has been perfect - not a single issue yet. I'd love to rip it apart for a flaw i encountered, but i guess i got one of the rare good specimens? It is odd that both models have been sold out since i purchased mine a couple weeks ago. Is that a sign of an underlying issue, or is it just a popular board? Anyway, not docking any eggs for my cons because they're basically my own fault. I knew the RAM was high profile, I just figured i'd still have space for the coldplate. I could get lower profile RAM and i'm sure it would be fine, but i'd rather have the Trident Z Neo that was on sale at the time.

Cons: - Shares the same godlike VRM with the most affordable ASUS X570: TUF. - Actually no point in me getting this one but the RGB is nice. - Useless small screw for M.2; you're going to have someone hold M.2 down while youre screwing in the shield

Overall Review: Great motherboard. Will suggest for 3950X and 5000 series and up.

Pros: - Ryzen 3000 ready; No BIOS updates are needed out of the box. - Great power delivery; Extra 4-pin EPS connector along with the standard 4+4-pin for Overclocking. - Active Chipset heatsink. - Two M.2 slots with an aluminum heatsink for both drives. - Pre-mounted I/O Shield. - On-board audio and Wi-Fi save you from having to populate extra PCIe slots.

Cons: - Expensive. - Due to the placement of the USB 3.2 gen 1 header, I was unable to connect the front panel USB 3.2 gen 1 Type A I/O because the radiator from my AIO water cooler was in the way.

Overall Review: - I would recommend this board to those interested in overclocking your CPU and/or RAM. - I would buy this board again for new machines if it wasn't so expensive. (picked it up on a Cyber Monday deal) - If I could change anything about this board, it would be mounting the USB 3.2 gen 1 header perpendicularly, rather than parallel to the PCB.

Cons: none - I give this bad boy 5 Stars

Overall Review: This is by far the simplest motherboard I've had the pleasure of working with. Everything was automated upon windows 10 clean install. I did not have to go to asus website to download (drivers, bios updates) individually. ASUS' "Armory Crate" did all the work while I stood by watching and admiring its integration. I was blown away. Totally impressed! Great support for 64GB of ram. Use the QLV listing from the manufacturer before you decide to buy your ram, every motherboard manufacturer has one. Make sure your ram is included in the list.