Feel 100% satisfied with your purchase -- with no restocking fees & no return shipping costs* within 30 days of delivery. Learn More
Price Alert
Add To ListFound on 414 wish lists 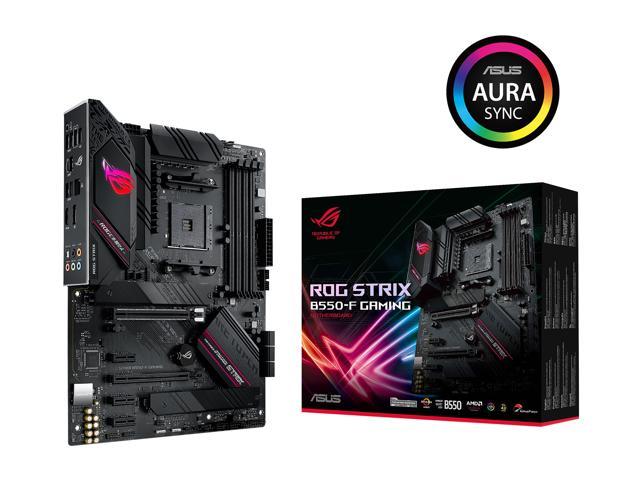 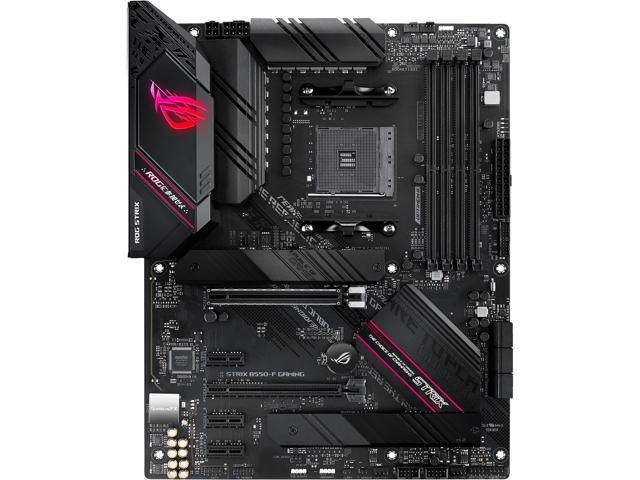 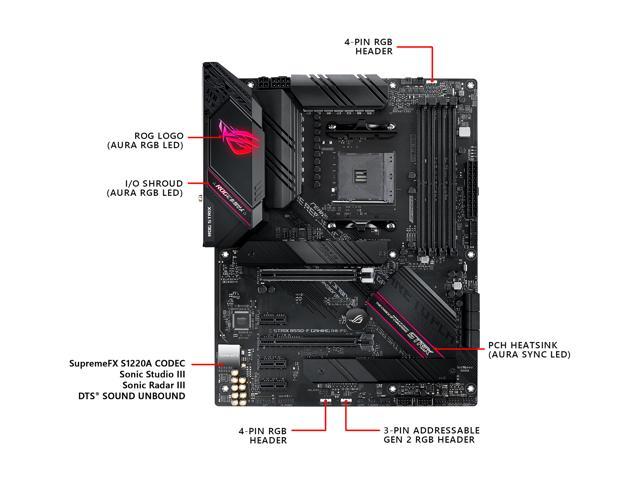 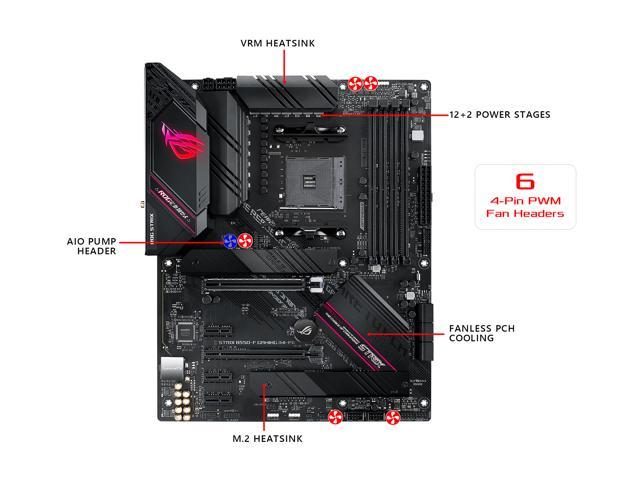 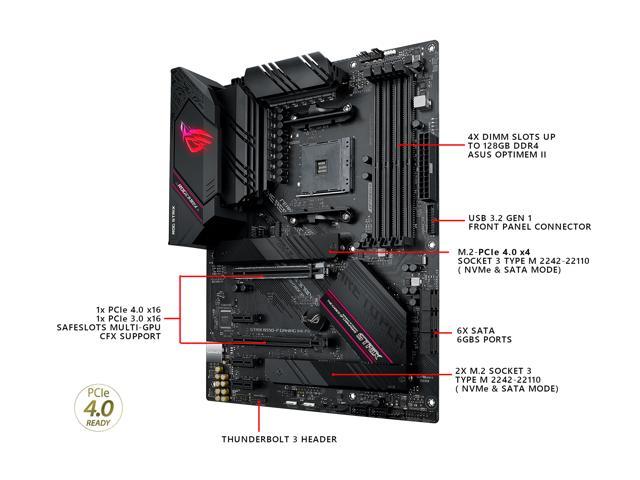 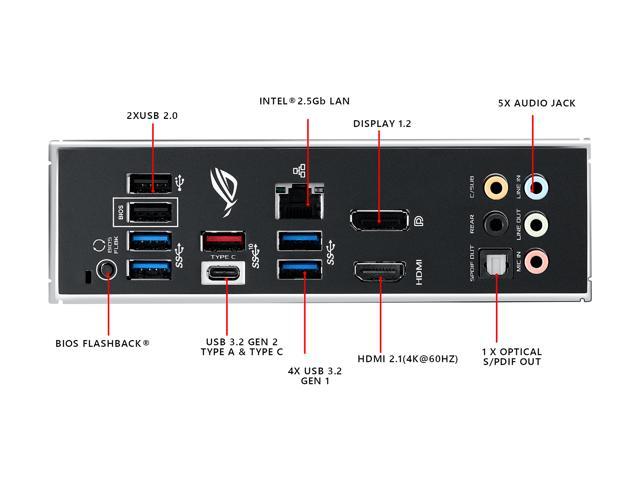 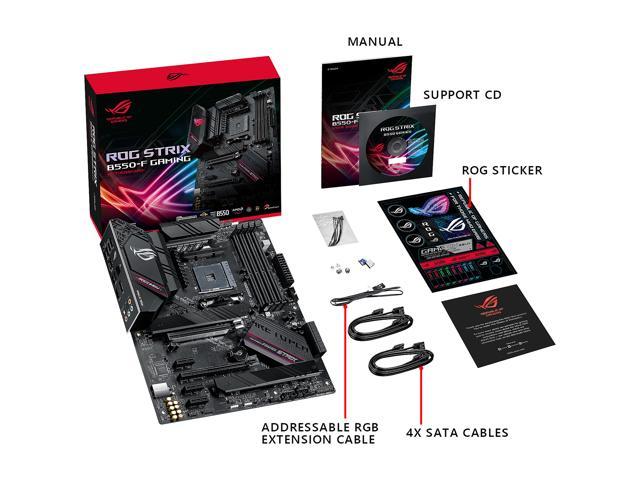 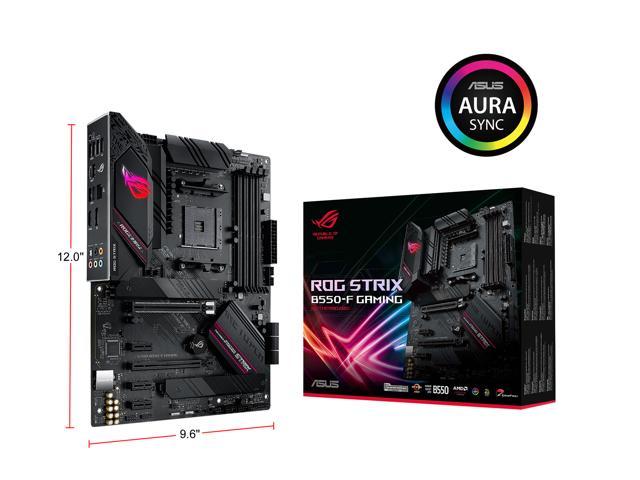 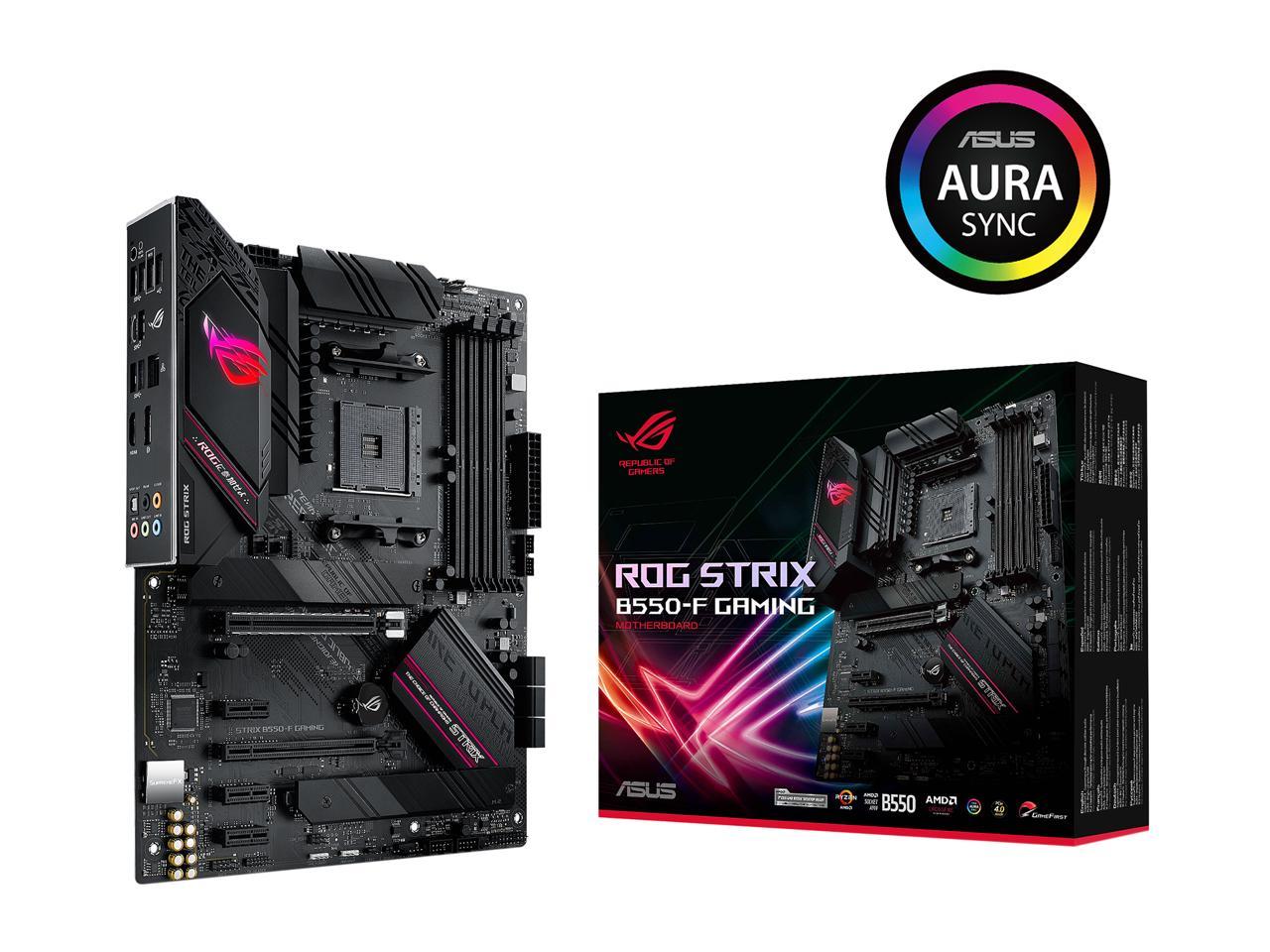 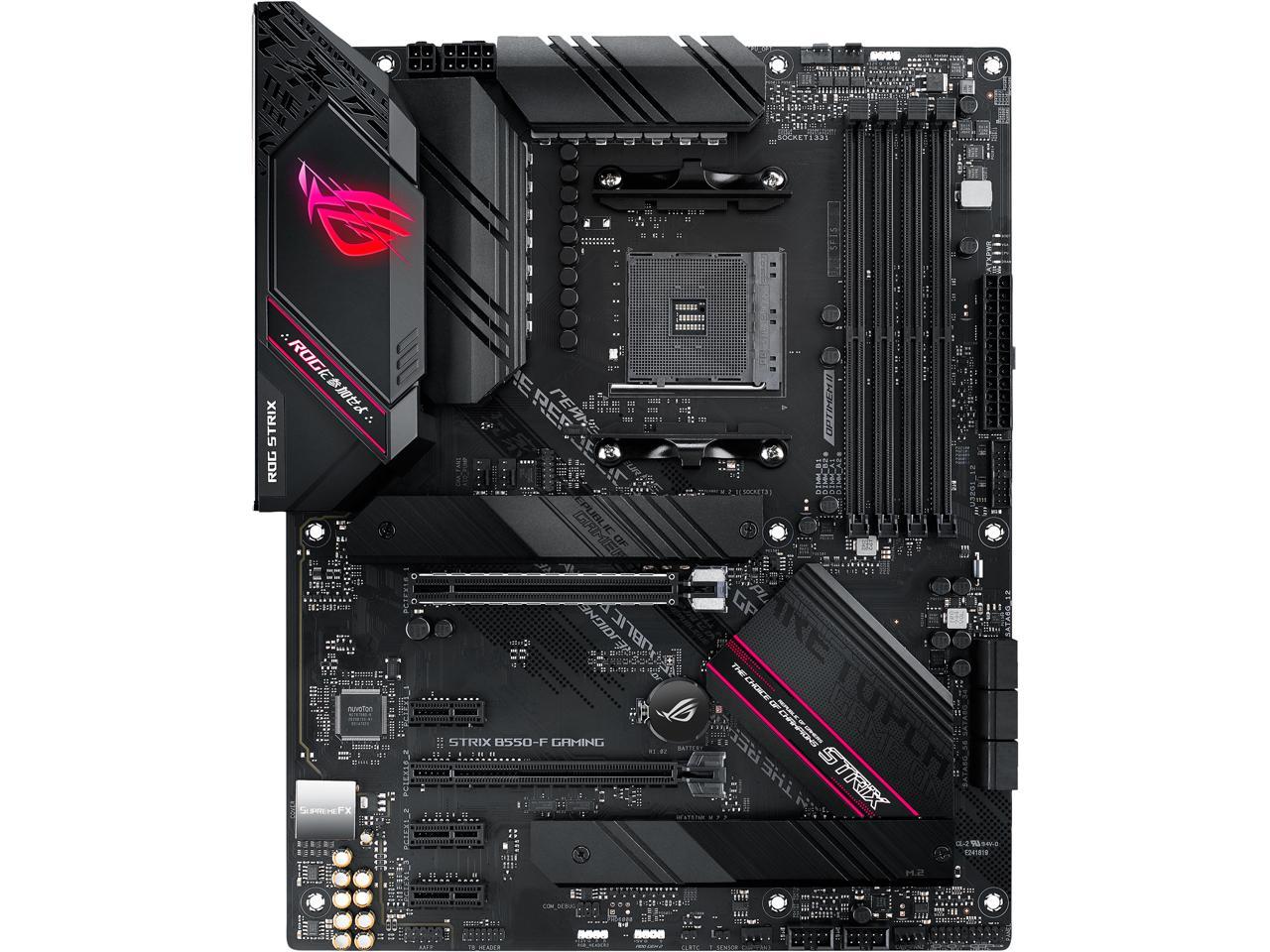 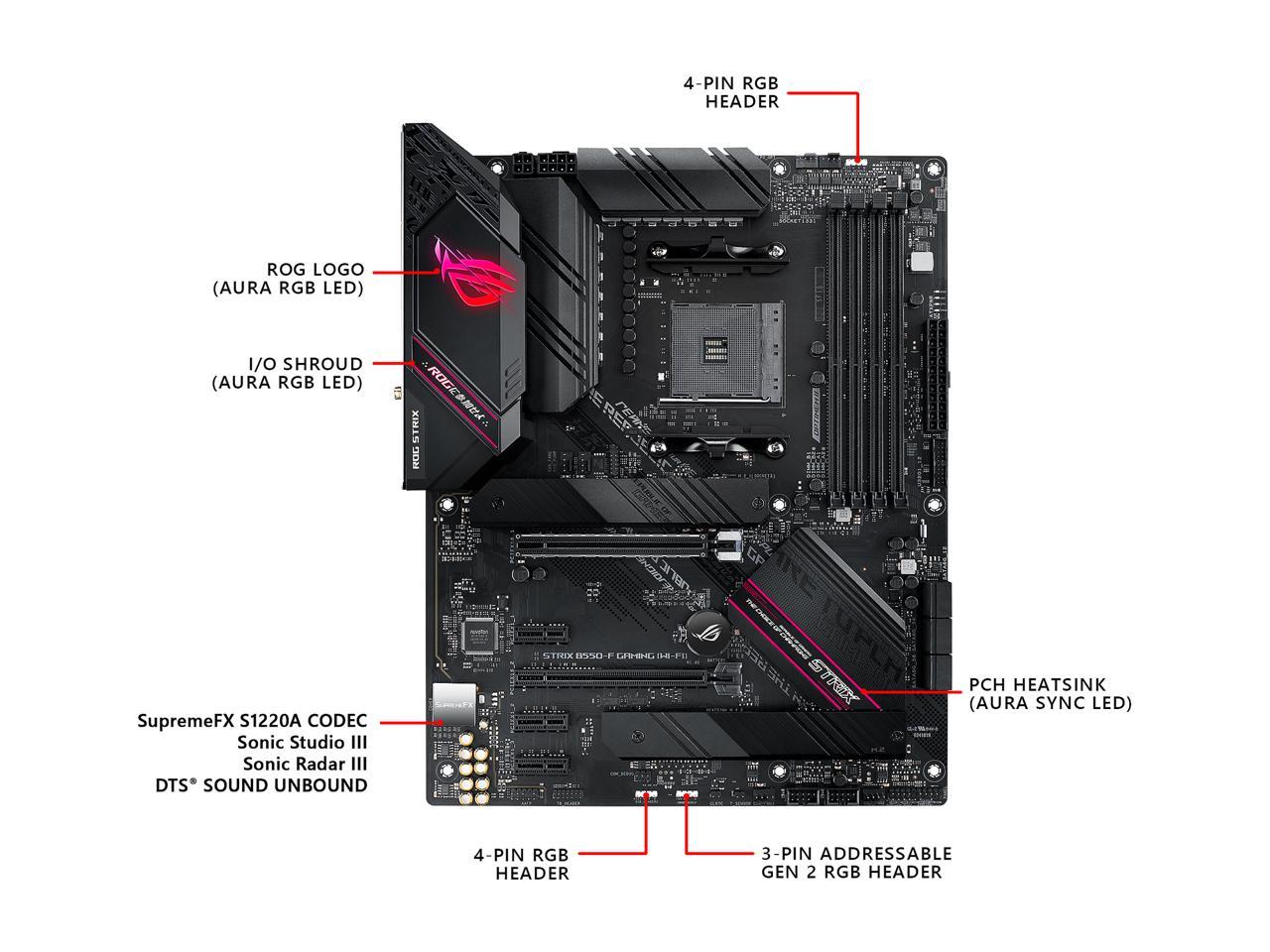 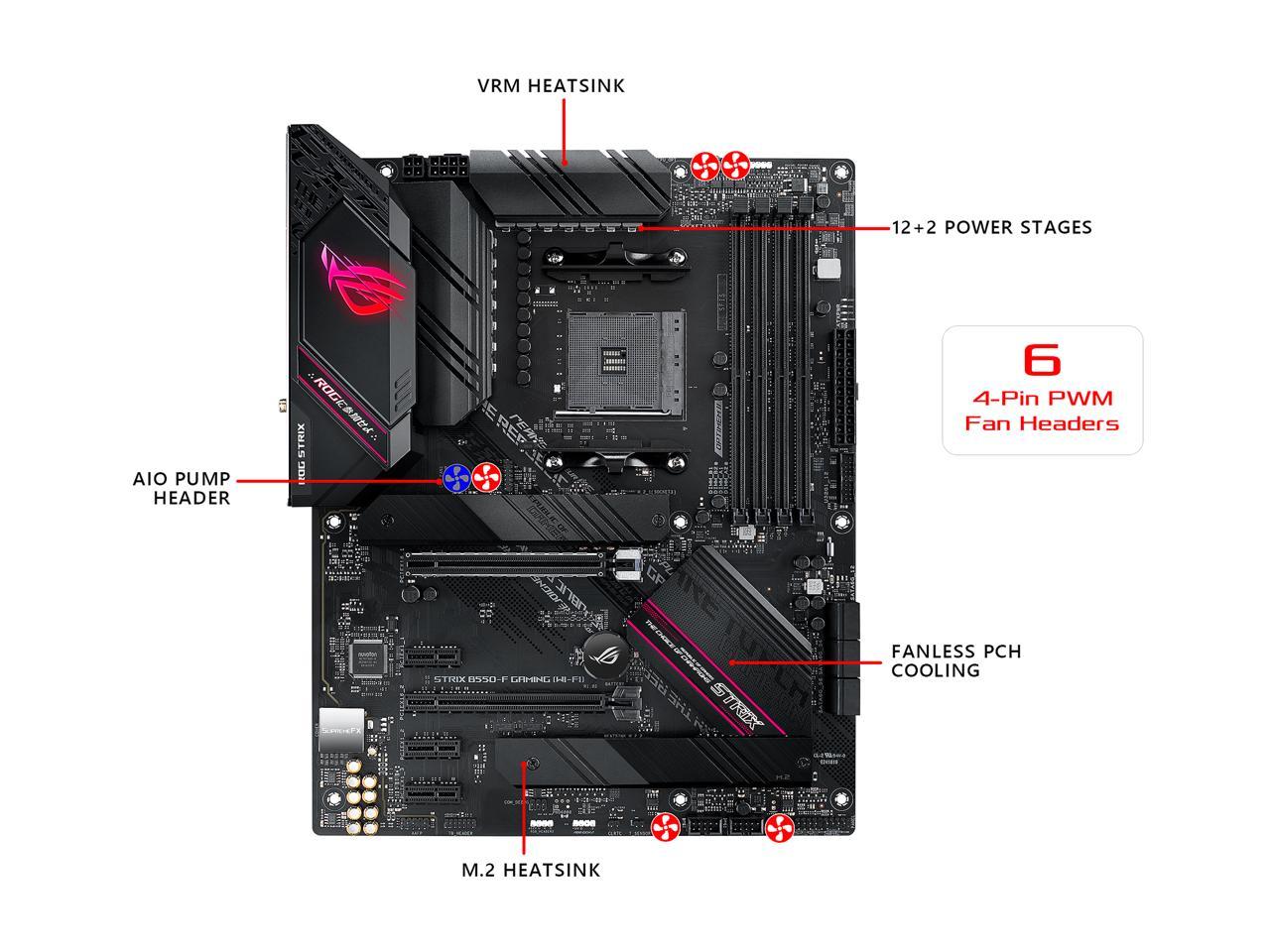 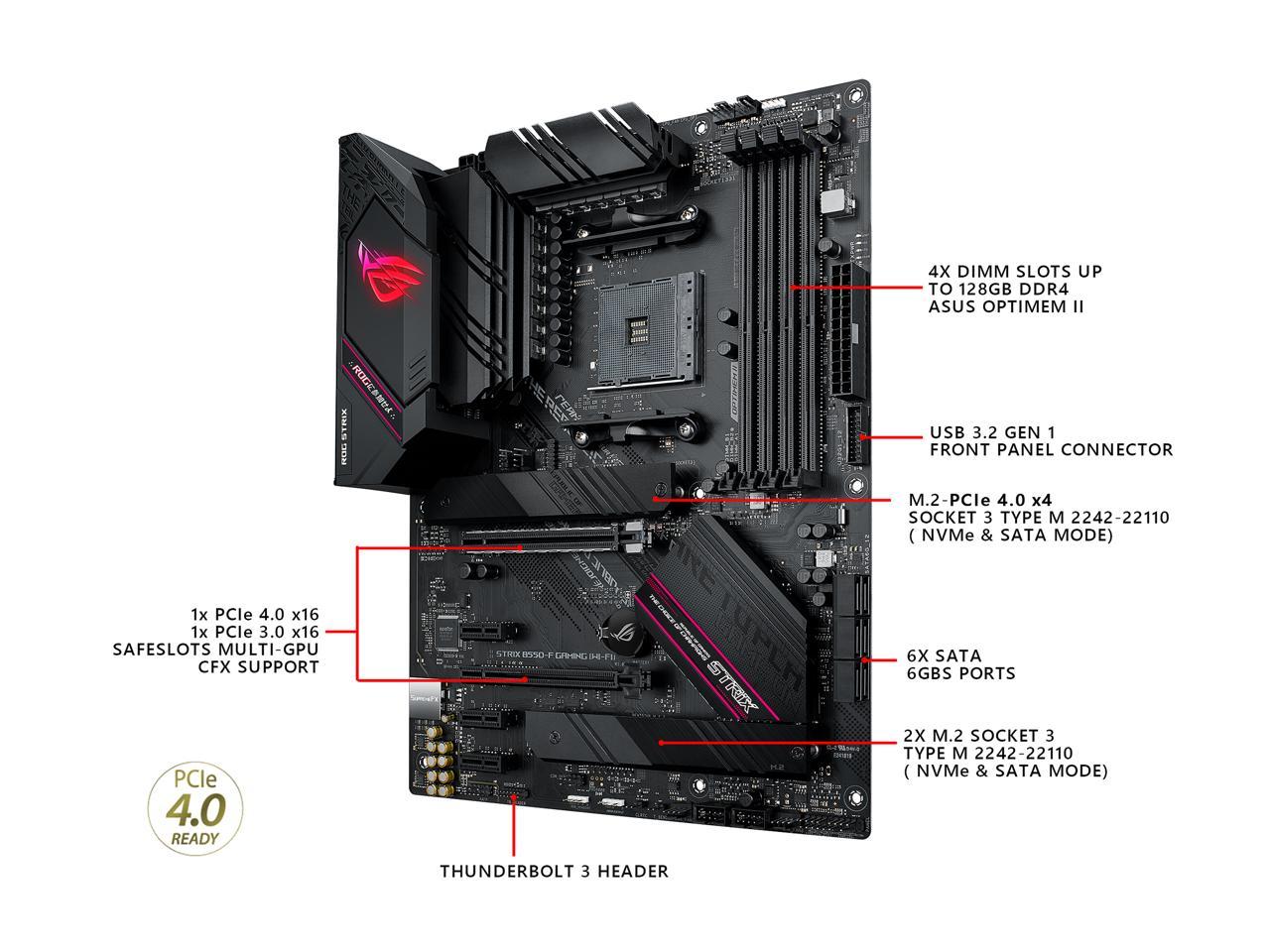 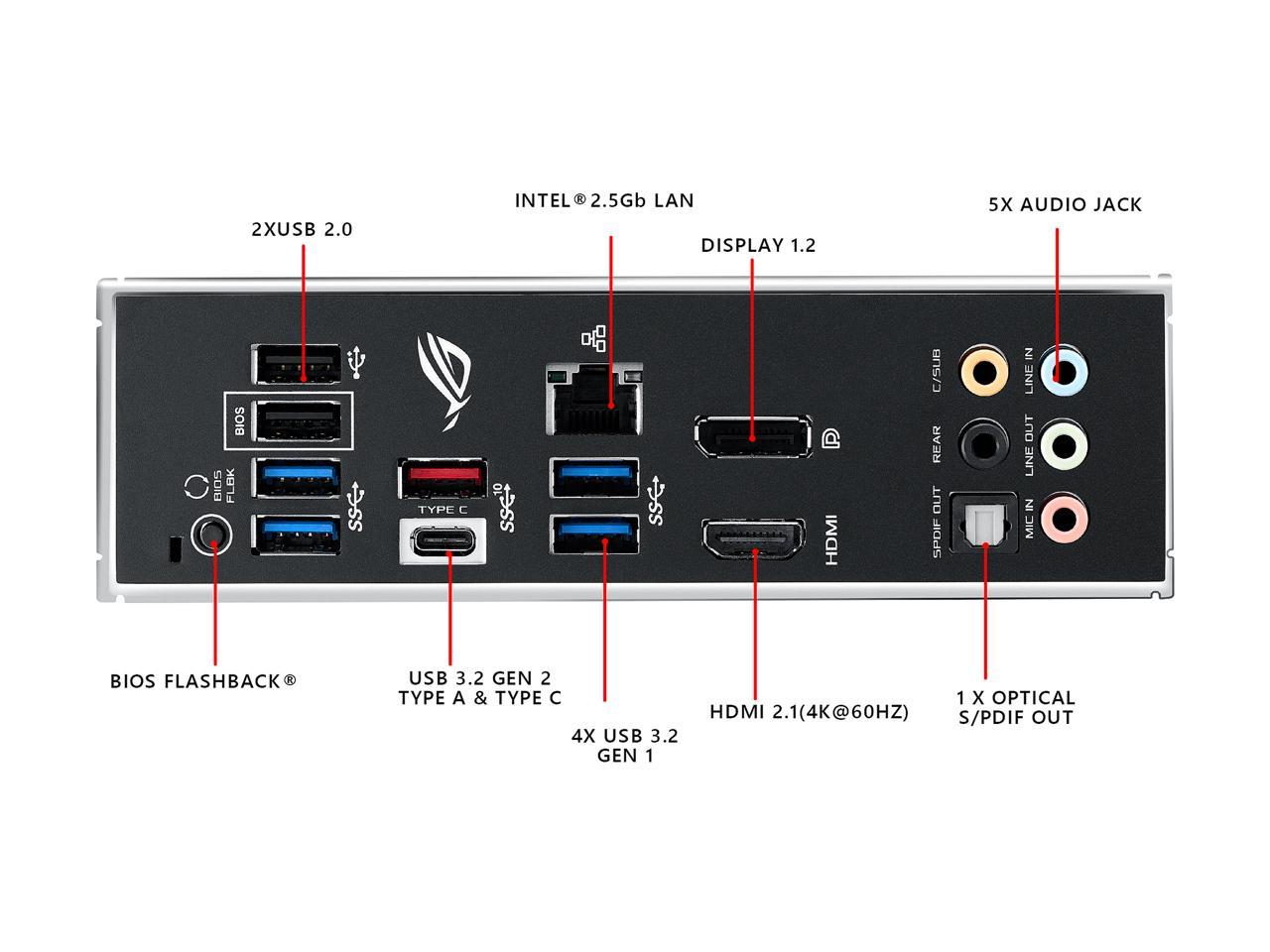 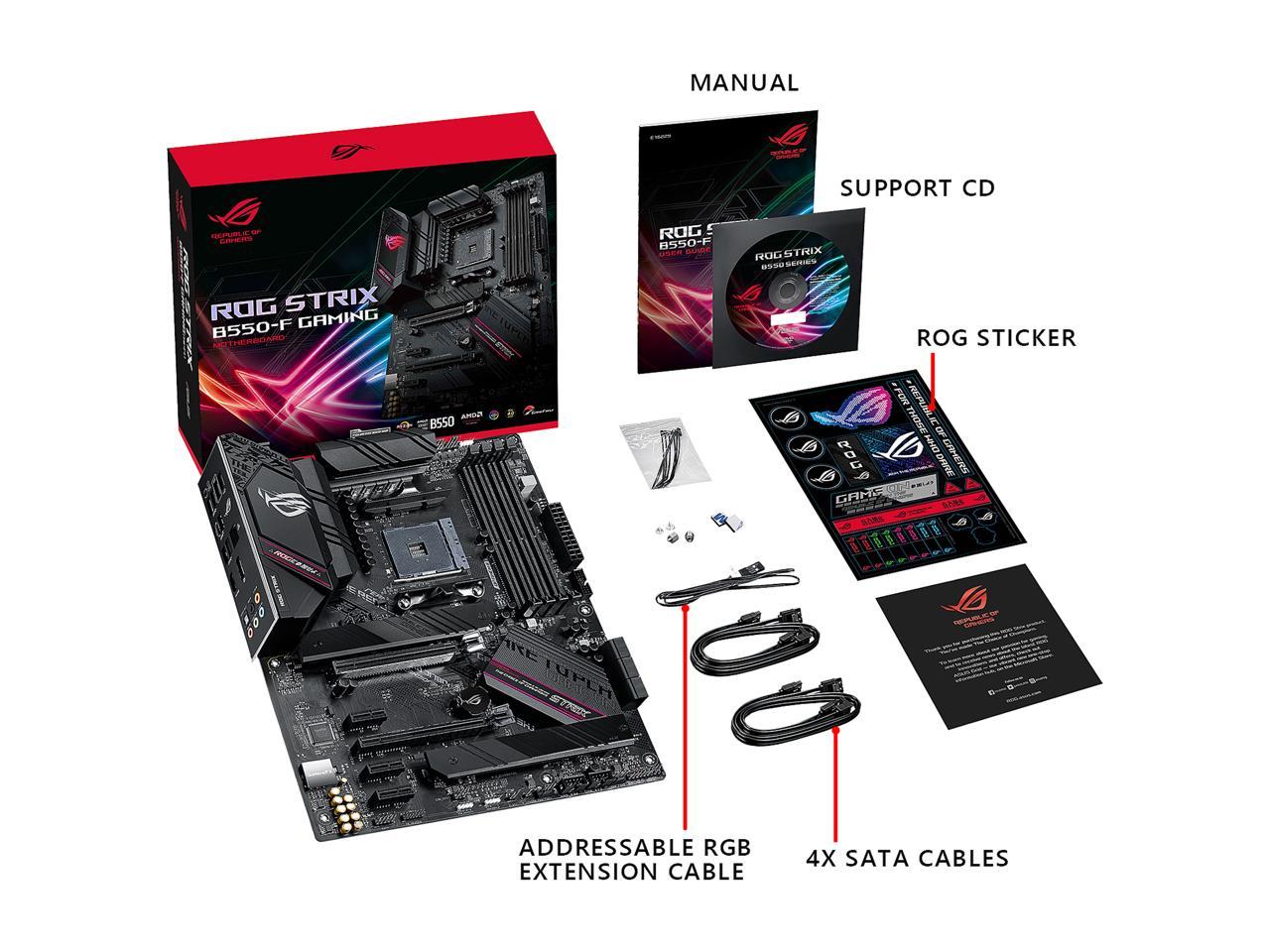 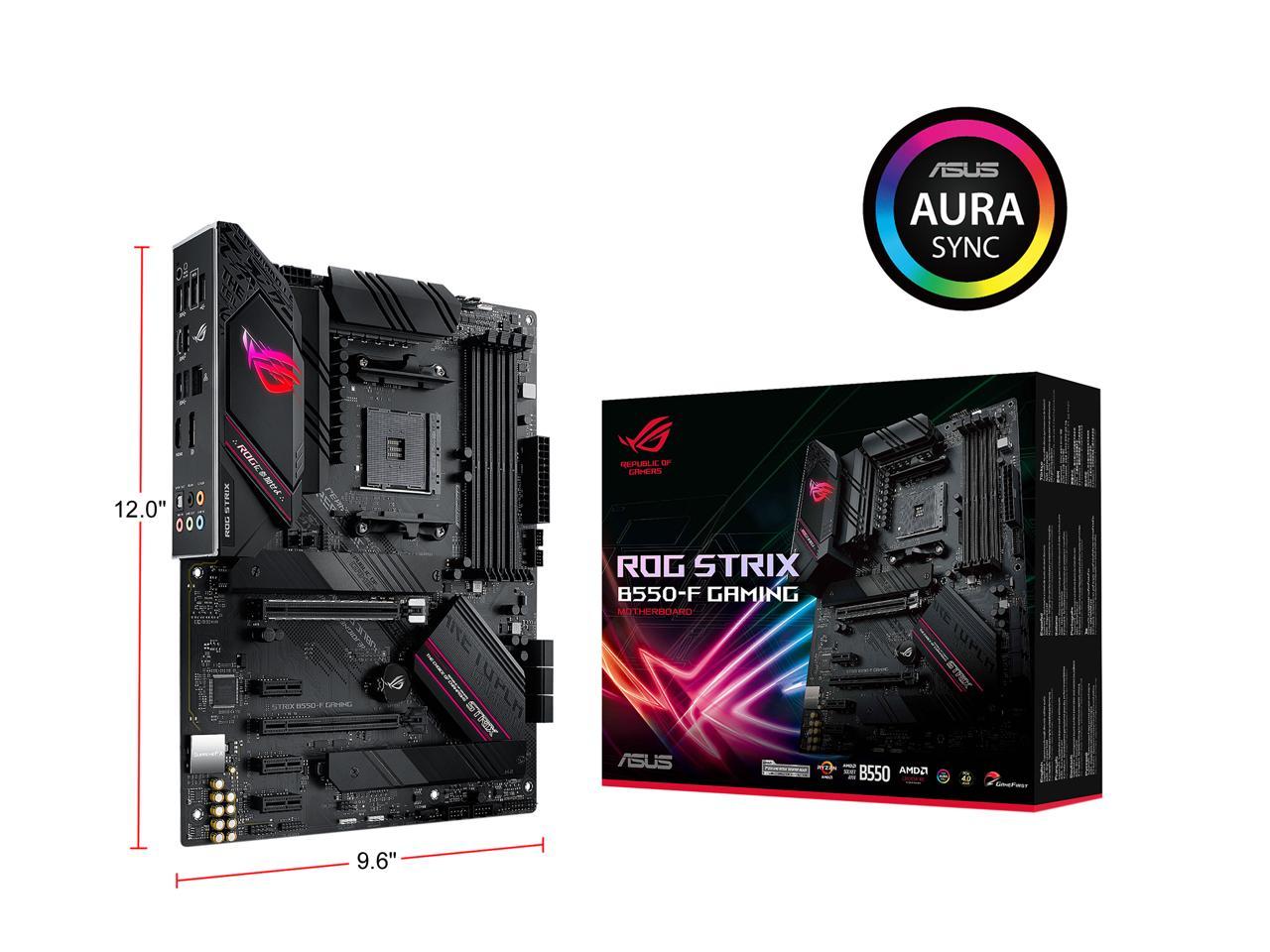 Pros: lighting, quality, nice features, I swapped from a b450-f strix, now my fans light up thanks to the argb header on this motherboard

Cons: only thing i had issue with was enable CSM in bios to boot into windows, then install Ethernet network controller. Then I was back in business.

Overall Review: I have a Ryzen 3700X and everything worked right out of the box for the most part. just about 30 minutes of network and audio troubleshooting but its a nice board. I'm happy with it!

Pros: This board has many excellent features, but the LAN controller was bad on 2 boards in a row, after newegg exchanged it, and Asus acknowledges the issue. I still give NewEgg high marks for helping me with the exchange process, but it's been frustrating waiting for a good board, since the 2nd one is now at the Asus repair facility on RMA. I'm still a strong proponent of Asus motherboards from my previous experiences, but I just got unlucky with this one.

Overall Review: Low marks to Asus for claiming an exchange would be very low probability to get the same problem again. High marks to NewEgg for always standing behind their products. I just wish there was a way they could test and know if there was an issue before passing it on to the customers. But it's why I trust them, even when there's an issue, it always gets taken care of.

Manufacturer Response:
Dear Valued Customer, We certainly understand your disappointment with the quality of the product that was received and the inconvenience this may have caused you. ASUS products undergo intensive quality control testing and final inspections for both hardware and software before we release it worldwide. ASUS provides warranty for the unit in order to fix or repair any isolated factory escape defect. If possible, give me a detailed description of any specifics in regard to your situation so we can collaborate towards a resolution. You can reach me at cl-adrian@asus.com. Your case for reference is N200908686. Thank you for choosing ASUS! Best Regards, Adrian ASUS Customer Loyalty – US Support
Joseph G.
Ownership: 1 week to 1 month
Verified Owner
Great performance8/10/2020 1:20:21 PM

Cons: Network adapter quite working after a week Having to send it back for replacement

Manufacturer Response:
Dear Joseph G., I'm sorry to hear that your motherboard's LAN failed after just a week of use. All ASUS products undergo intensive quality control, testing and inspections. What you've experienced was not intentional or representative of our brand. I understand that you have returned the unit for a replacement, but I will forward your feedback to the Product team for review. If you have any general or technical questions, please email me at cl-lane@asus.com and include case #N200834642 for reference. ​Thank you for choosing ASUS! Best regards, Lane ASUS Customer Loyalty – US Support
Jeffrey G.
Ownership: 1 week to 1 month
Verified Owner
Solid board, but the onboard NIC has trouble running at gigabit speed2/20/2021 8:56:18 AM

Pros: Good solid board. It was easy to replace my old Intel MB with this and a Ryzen 5 5600x. I would have bought a cheaper B550 model, as I don't care much about all the high-end gamer hoo-ha, but I wanted the Instant Flash button so I would be able to update the board even if it came with older BIOS not supporting ZEN 3.

Cons: I have not been able to get the onboard 2.5GB NIC to connect at any speed except 100 megabits. So far I have had to install a separate Intel NIC card to get gigabit speeds. I'm still working with Asus support to see if they can solve the issue.

Overall Review: Seems like a good choice if they resolve the LAN issue. Or perhaps the issue only relates to my particular board. I did end up using the Instant Flash, and it worked once I had the BIOS on a thumb drive formatted with FAT16 with Master Boot Record partitioning. It did not seem to work with FAT32 or GUID. I'm not sure if the shipped BIOS would have worked or not. The board failed to boot after I first installed everything so I tried updating BIOS. That did not fix it--it turned out my old power supply had unexpectedly failed. With a new power supply, it all worked great on the new BIOS.

Cons: -Serious issues with the internet. Frequent pack loss / ping spikes for 2-5 seconds in multiplayer games. After spending a lot of time troubleshooting, I can only conclude that I am suffering from the same issue alluded to in many other reviews. A real shame to have this level of problem in an expensive product, especially from a normally quality brand.

Overall Review: -Would not recommend due to issues with internet connectivity.

Manufacturer Response:
Dear bubble, I'm sorry to hear that you are having persistent LAN issues with this motherboard. All ASUS products undergo intensive quality control, testing and inspections. What you've experienced was not intentional or representative of our brand. Is this the only device on the network experiencing performance issues? Please reach out to me at cl-lane@asus.com and include case #N2101080188 in your email for reference, I'd like to help you troubleshoot this in more detail. Thank you for choosing ASUS! Best regards, Lane ASUS Customer Loyalty – US Support
Anonymous
Ownership: 1 week to 1 month
Verified Owner
Great Motherboard8/21/2020 10:49:09 PM

Pros: Great manual with lots of useful info. Make sure to edit the frequency of your RAM and enable XMP mode if needed. BIOS is also good (coming from Gigabyte). RBG logo also looks good in the rig. It feel durable, but make sure to hold the back when you apply the pressure with the PSU cords.

Overall Review: It is worth the great money. Do not go cheap on Motherboard.

Pros: They were listed already but the cons and other information is where I've updated..

Cons: LAN controller having issues with speed and connectivity (got it working/stable after several Windows 10 reinstalls and several drivers the best being intel's own driver.. Still flaky). On board NVME connectors eat/destroy/cause SSDs on the QVL list to suddenly stop working/cease to be seen/die.

Overall Review: Like others, I've experienced the LAN issues after a few months. It took several reinstalls of Windows 10 Pro and finally using Intel's latest driver available to make it work. While a headache, especially being my Plex server, the real problem lies in it's inability to with with NVME SSDs from it's QVL list or is insatiable appetite to destroy, cause to stop working, not recognizing them after they've been working fine. It first started about a month ago where my Corsair MP 510 250GB NVME SSD (from NewEgg's Eggxpert review list) stopped being recognized by the motherboard. Even after BIOS updates, switching between both slots, it wasn't being seen. After the 30th shutdown/reboot it finally gave an error on my keyboard not being seen (I had it set to BIOS on my Corsair KB do that made sense) but I noticed it was showing that Corsair MP510 SSD on the information screen. I go into the BIOS and in the AMD raid Expert utility it slows it but it's showing offline. That literally made no sense but BOOT, Tools, SATA configuration never showed it. It did however, show my WD Blue 00YS70 250GB NVME SSD no problem. After several dozen back and forth emails from ASUS tech support (and not getting any freaking where even though they kept apologizing and swearing to get the issue resolved) I wound up getting a steal from NewEgg on the Relatech P400 1TB NVME (PCI-E 3) SSD and installing that. Contrary to popular belief from ASUS, it showed up no problem and here's the kicker, it's not on the QVL. So I was up and going with 2 SSDs again and fresh Windows installation. Fast forward until this morning and my PC was frozen but otherwise working fine (wouldn't turn on the display but I could still watch Plex without a problem). I rebooted it, it loads into Windows fine, but then I can't click on anything but the mouse is moving normal and everything seems ok. So I shut it down and grab my USB utilities drive and run some tests on all the drives connected to the motherboard that can be seen. The WD Blue SSD has no read errors, write errors, no loss of data or anything and neither does any of the other drivers. I quit out of my utilities drive and it reboots but it keeps going into the UEFI BIOS. Took me several minutes to realize it no longer seen my Boot drive (the WD Blue SSD). It hasn't seen it sense and nothing I do can make it work. I took it out and put it in 2 other systems (one being an Intel NUC that my company uses as an Asterisk PBX box) and it's instantly recognized and shows my Windows installation and all the files and programs therein. Problem is, I can't clone that off there and reuse it because now my Relatech isn't able to be used for Windows 10 to install on. This has been the worst board, by far, I've ever had to deal with. I understand problems arise (read known issue with Intel's 2.5G LAN adapter and it's drivers that was allegedly fixed in a hardware revision that us previous buyers aren't being given replacements for...) but this is ridiculous. It's 2 drives that have mysteriously quit working that are on the QVL and now a 3rd can't be used to install Windows on. I've erased and formatted that one and lost the data I had on there and it's all been for nothing. I'll be contacting ASUS support but they will need to know I've already troubleshot the issue and the drive is fine in at least 2 other systems. I've got the Relatech in M.1 as the M.2 slot seems to be acting finicky with any SSD installed there. I've also checked the slot for dust, debris, and damage and nothing is there. I even took as ESD safe blower and cleaned out the whole case (barely anything in there) and still it acts finicky. Buyer beware on these boards. You may be better off going with the X570 as I moved from my ASRock X470 Gaming to this and wish I never did.

Cons: it won’t even connect to the ethernet i have plugged in and i know it works because i was just using it before putting the board in this is really annoying

Manufacturer Response:
Dear Brendan B We certainly understand your disappointment and the inconvenience this may have caused you. Please make sure you've completed all pending updates via Windows update. Afterward, make sure to update your drivers to ensure your system is at optimal performance, for more detail please refer to the provided link*. If the issues persist, feel free to contact me if you have any technical or general questions. You can reach me at cl-adrian@asus.com. Your case for reference is N2101044625. Thank you for choosing ASUS! Best Regards, Adrian ASUS Customer Loyalty – US Support