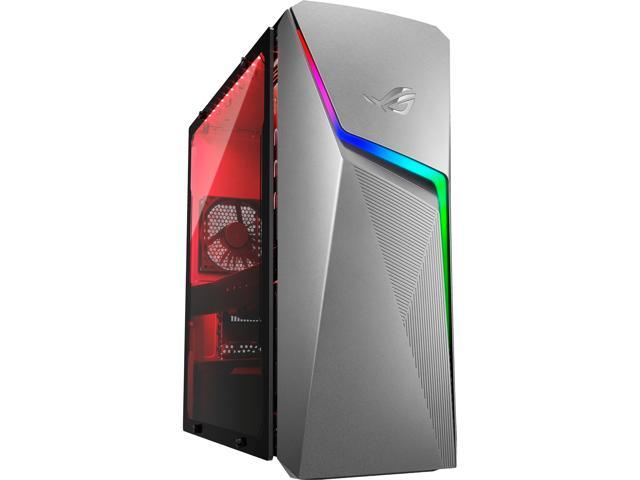 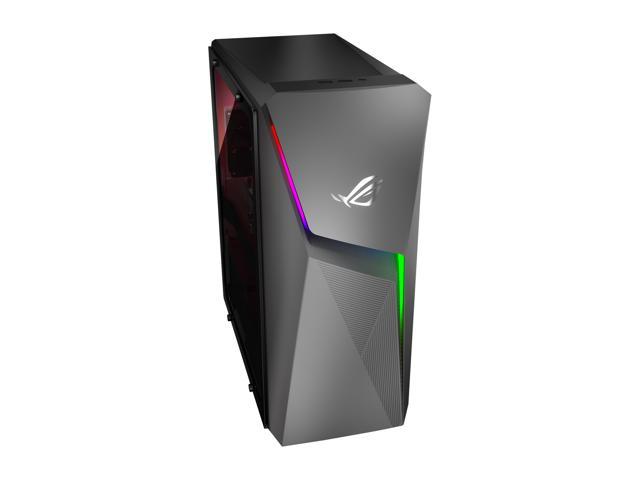 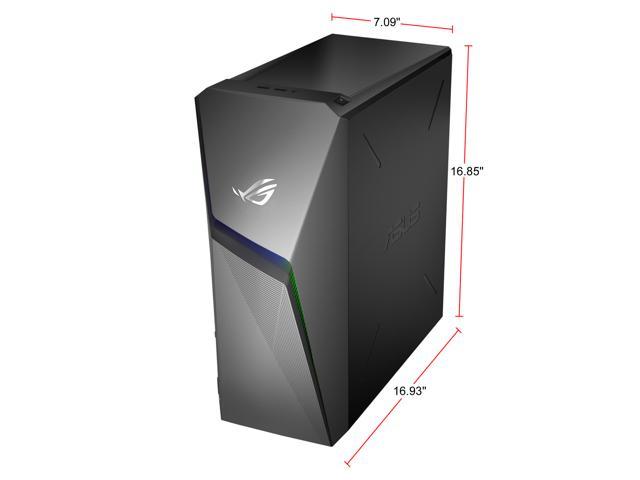 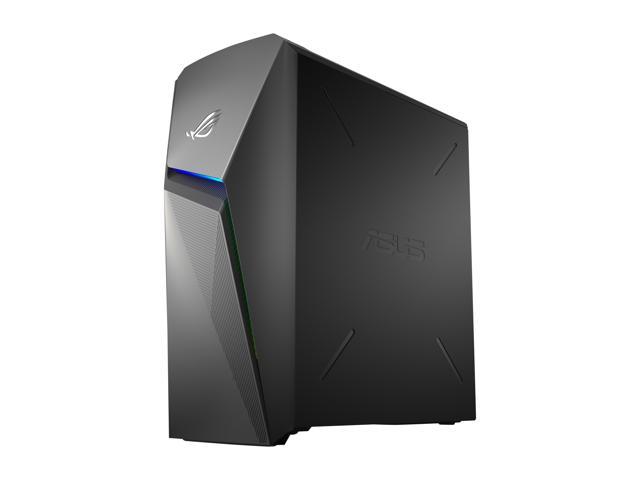 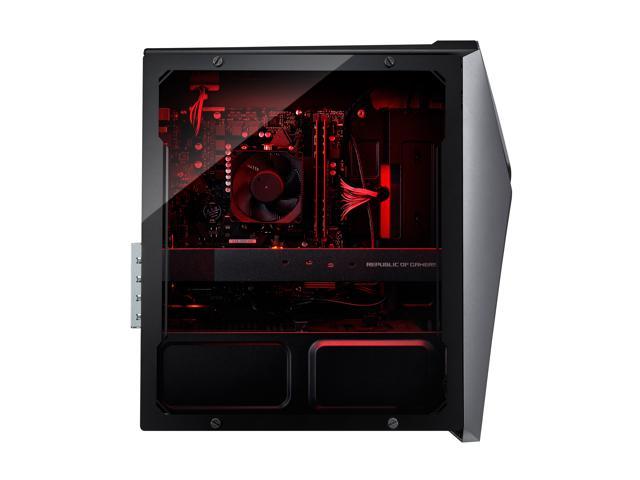 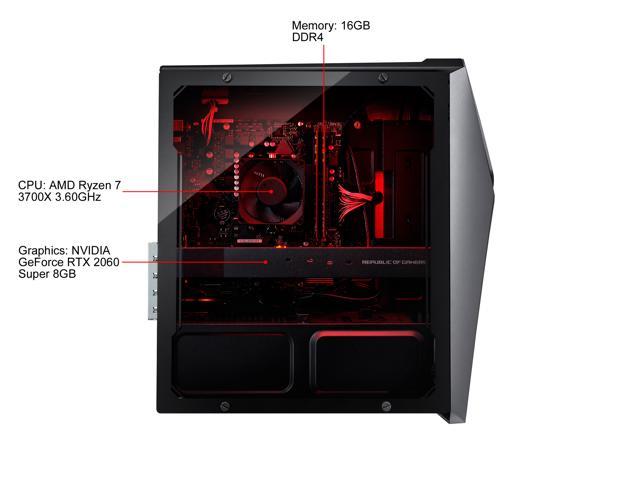 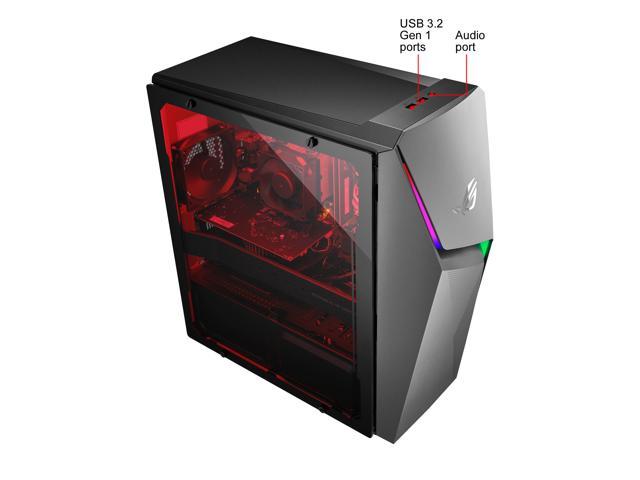 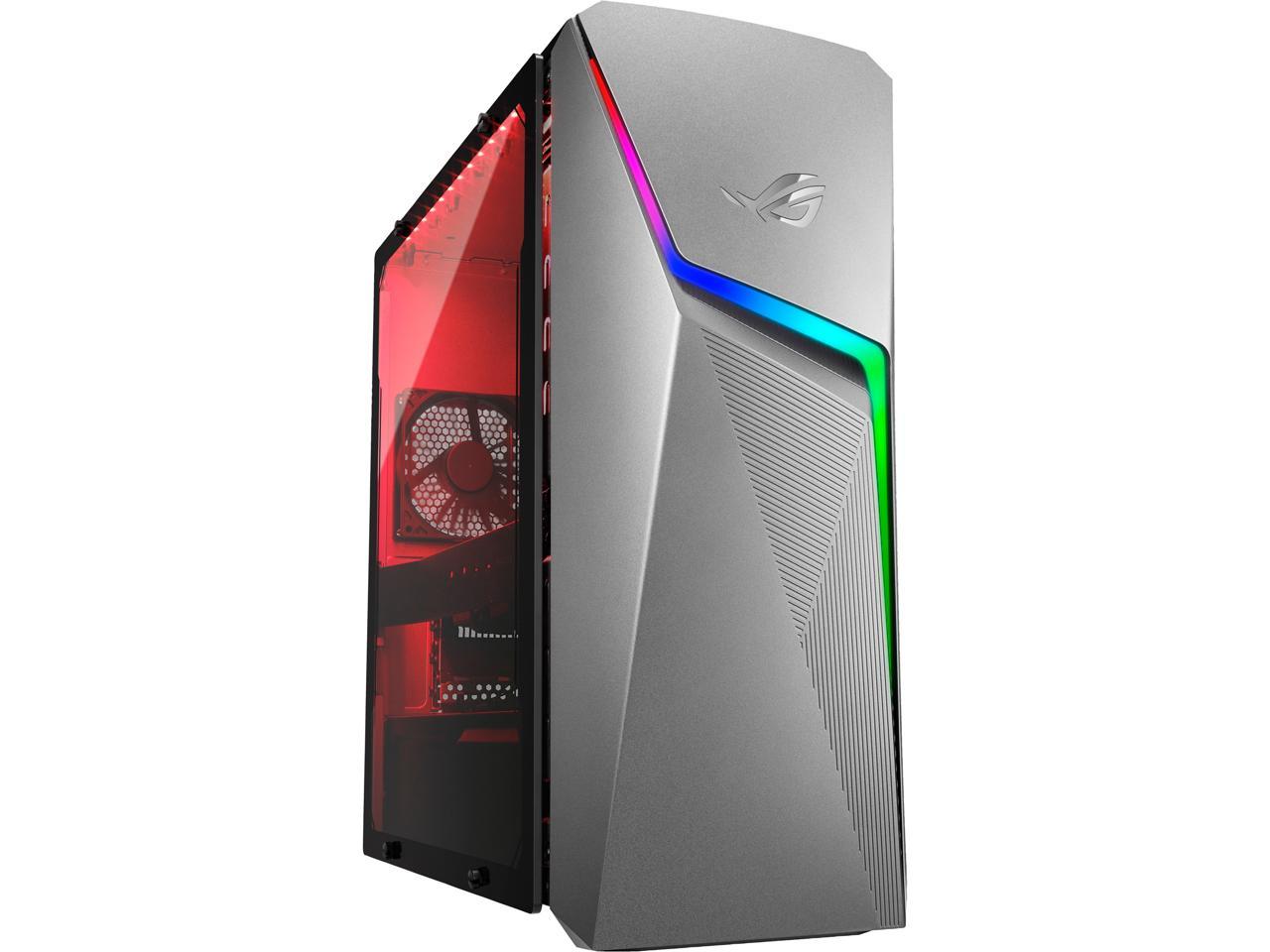 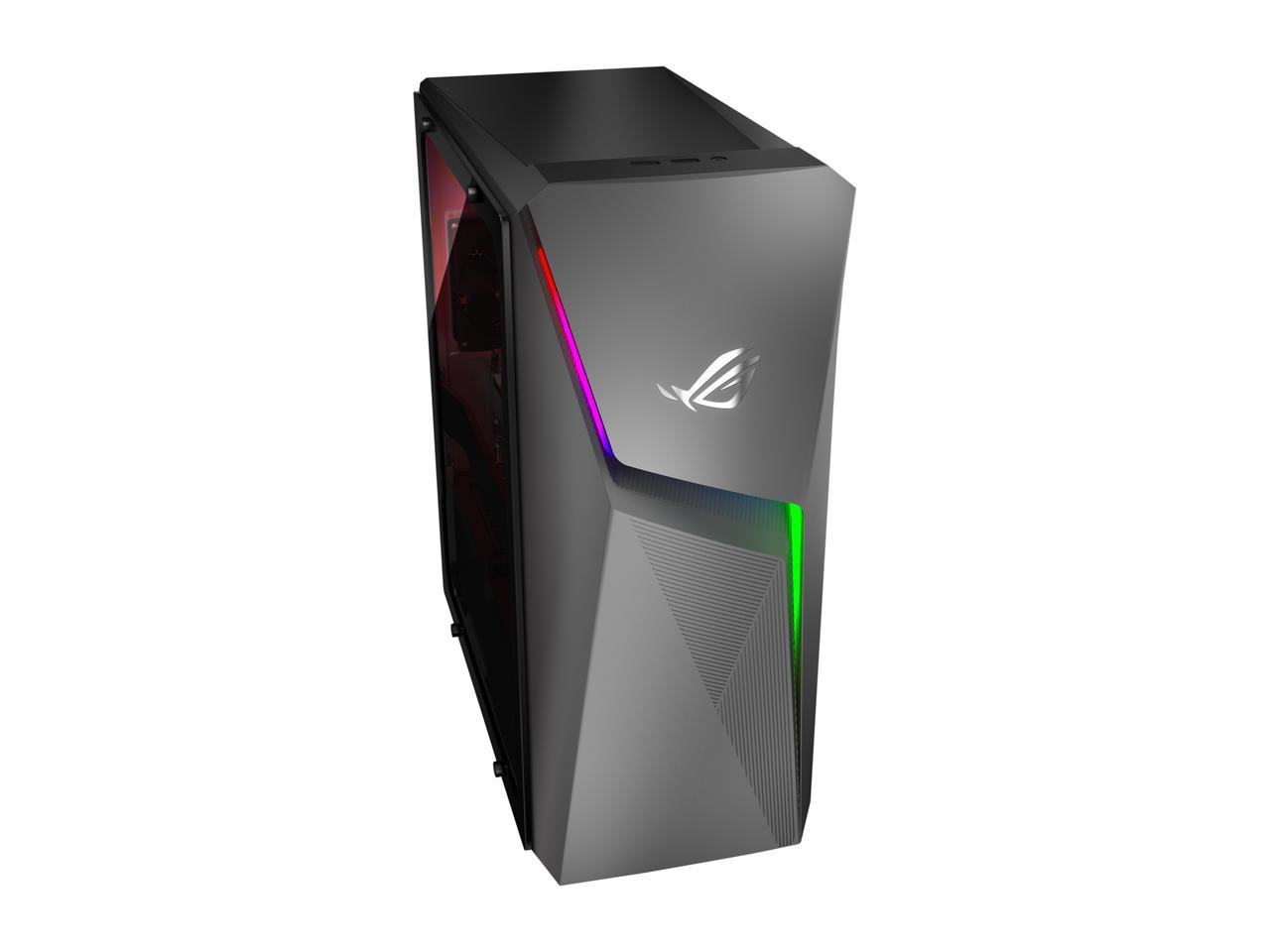 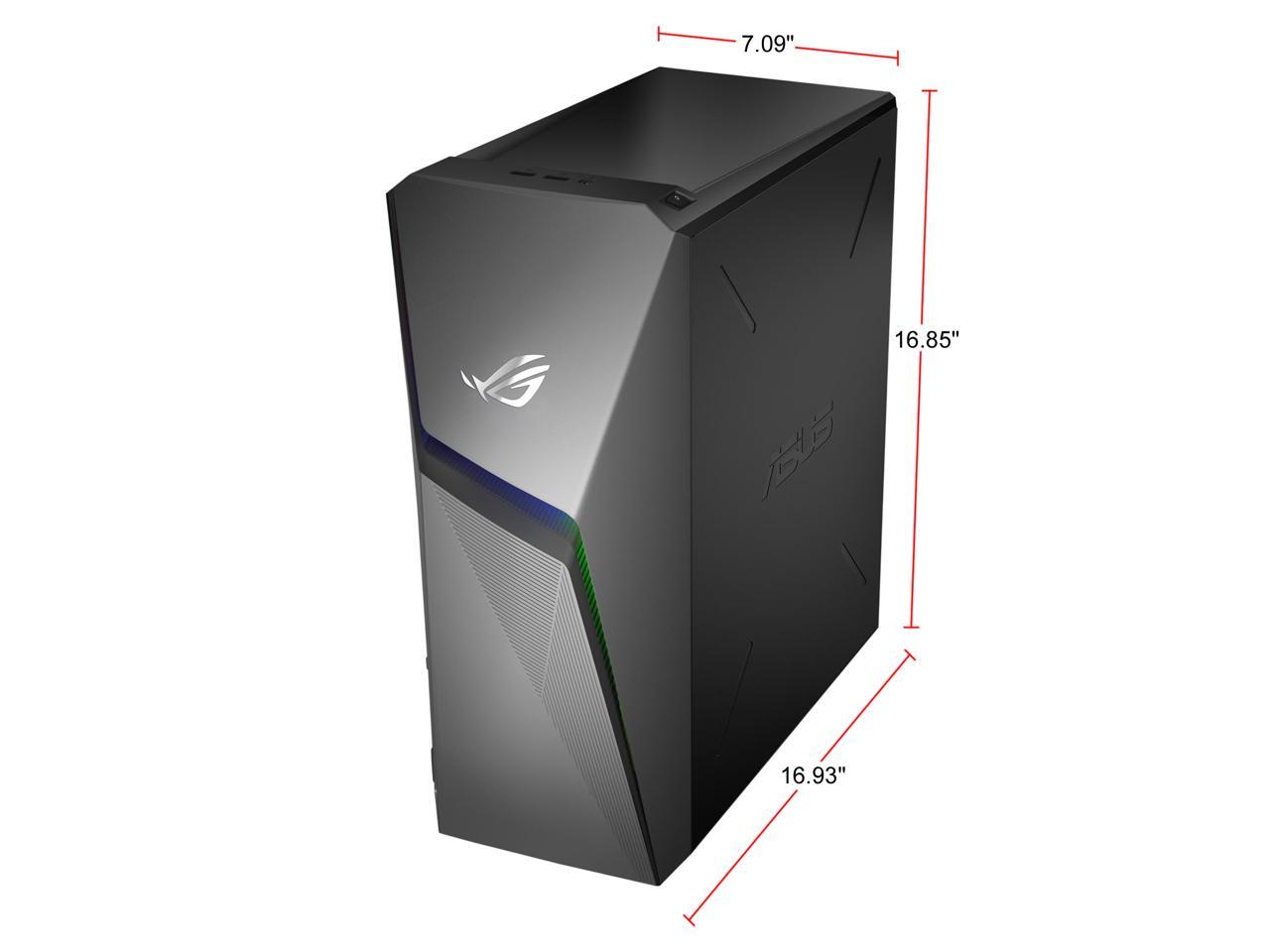 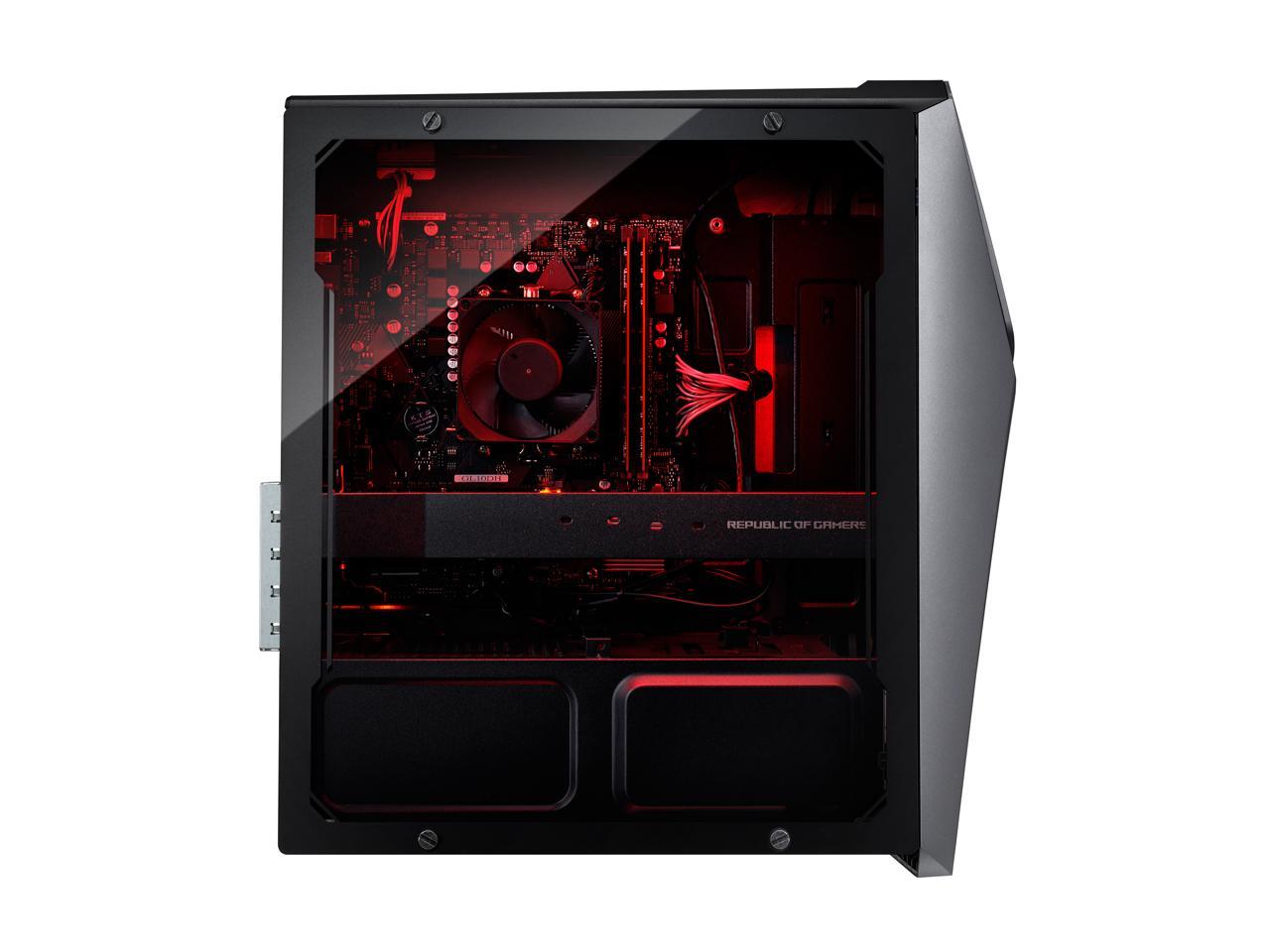 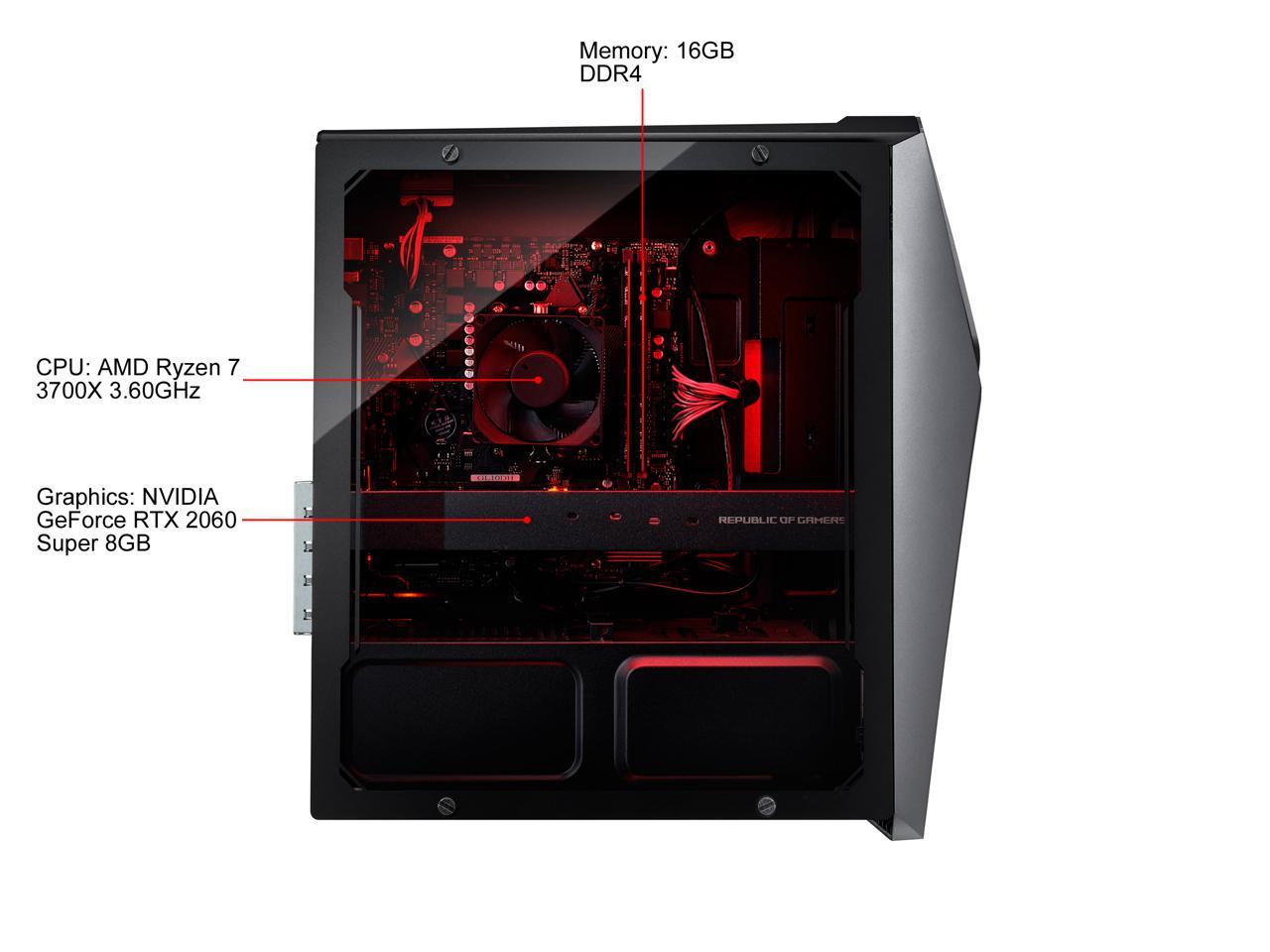 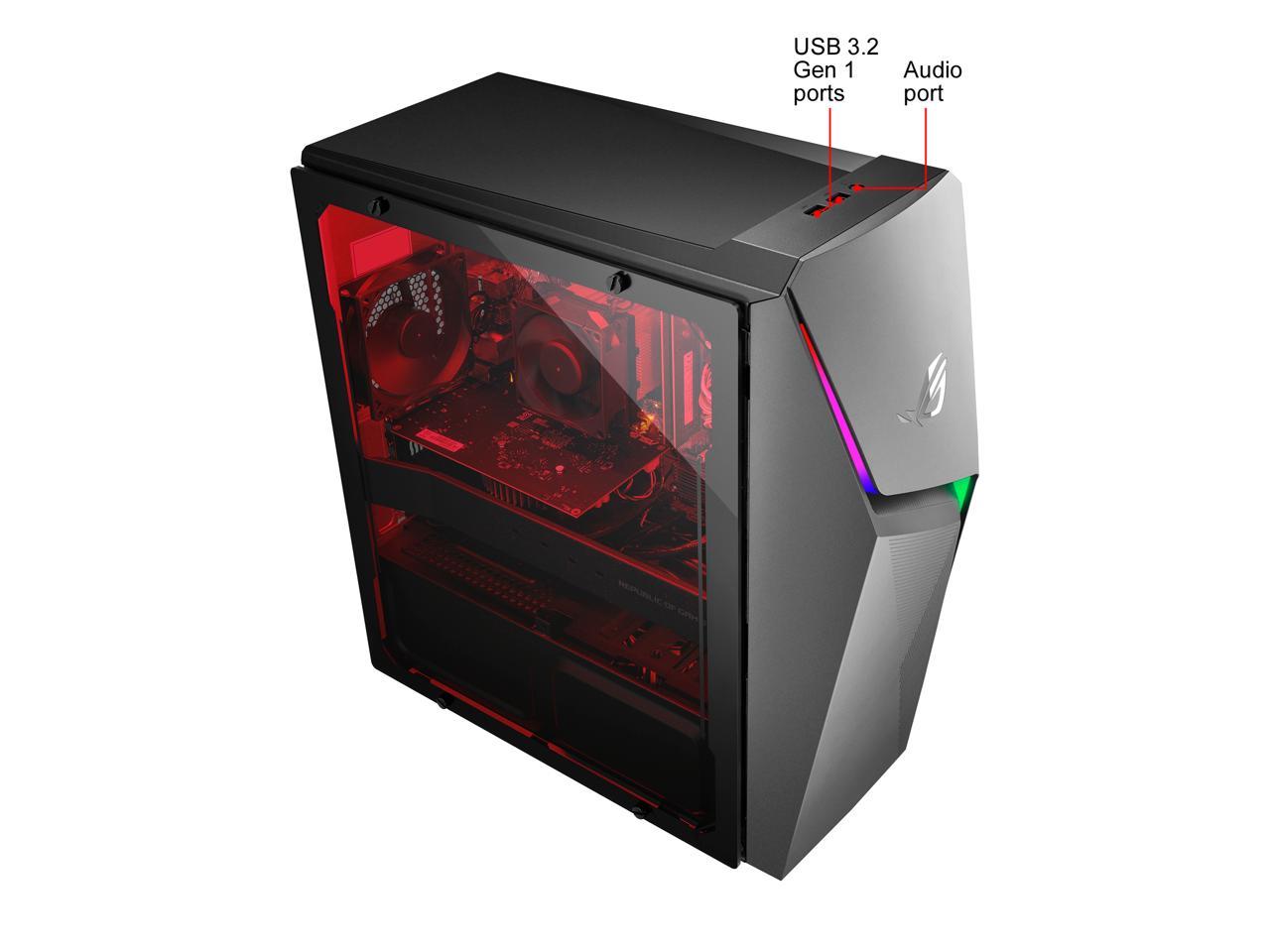 Learn more about the ASUS GL10DH-NH764

Pros: Games run mostly smoothly for the most part, looks nice, worked from the start.

Overall Review: Great PC for the price, but beware that what you see may not be what you get.

Overall Review: I just bought this last week. I have an Asus laptop Zephyrus S and do heavy graphics work on Apple. I wanted this to enjoy VR and play games when I have downtime. After looking at Ibuypower, and other brands I landed on this and upgraded it to 32 GBS Ram with 2070 super. I used to build PCs in the old days of Crysis 1 so I was happy to jump back in with the Power of this beast. It blows my IMac out of the water and doubles as both a gaming PC and 4K video render and After Effects Machine. It showed up as pictured the cover on the front is darker which I was actually happy about and it’s quiet. The Heat Sink and fan are pretty beastie and I can upgrade this guy as well. For the money it’s a good buy. I did hours of research and for the price point couldn’t beat it.

Cons: My biggest disappointment is with CPU COOLER, what I got is NOT what shown on the pictures. My system came with standard aluminum radiator and the 80mm fan on top of it, more like the one that comes with AMD CPU in retail combo. Pictures show cool looking Direct Contact Heatpipes cooler with 120mm fan - similar to cooler-master-hyper-black-edition. - That is not what we got, very disappointing to get that from ASUS and NEW EGG. Lost an egg for that. One more disappointment is the MOTHERBOARD and CASE, it's Micro ATX (mATX formfactor - on pictures it looks larger) - so the upgradability is very limited on this part, I promised my kid to get a better motherboard sometime in the future, something like ASUS ROG with X470 or X570 chipset - but those are not even available in mATX size (From ASUS anyway for now). So I'm going to have to get a different PC for him later instead. Also Mother board does not have RGB LED header for AURA sync, so you cannot add any new GRB leds that you can sync with the rest of your system but the ones that there are good. - Lost another egg for that. Has only 2 memory slots 32GB MAX RAM (16 installed) You will not be able to add DVD or BluRay drive - only external USB if you want /need one. 'Only one exhaust fan at the back and none in the front - Gets LOUD under heavy load too, because it's only 90mm, I wish it was 120mm . *Also don't try to get a video output from on-board VGA or DVI connectors - Ryzen CPU doesn't support it.

Overall Review: Newegg had it shipped it fast - THANKS! This is a good entry level ROG gaming PC with nice LED lighting effects. I wanted to get away without building gaming rig for my son by getting this desktop, the price is better in comparison with what I could get for the money while it was on Black Friday sale. My son was very excited and happy until we noticed that CPU heatsink/Fan is not what was shown on Newegg website pictures and everywhere else on the internet for this model (please see CONS) – These seems to be a stock ASUS pictures. There was nothing wrong with the cooler it came with and it provided sufficient CPU cooling, it just didn't look as nice as the rest of the system. So we ended up upgrading it with AMD Wraith Max RGB LED that has 4 heatpipes and powered its LEDs from USB header and used AMD Ryzen Wraith Max RGB lighting control software. Much happier now and also looks Awesome! I would still buy this PC again.

4 out of 4 people found this review helpful. Did you?
Manufacturer Response:
Dear Dmitriy A, Thank you for taking the time to post your feedback on this model, we truly appreciate it. Firstly, we would like to extend our sincerest apologies for the CPU cooler in the device look different from the images on the NewEgg & ASUS website and that your not pleased with the design of the motherboard and case. We understand your disappointment and the inconvenience this may have caused you. This information will be passed to development team and an investigation will be completed regard the device fan. We are very happy to know that you are pleased with the device other than the issue you had with the CPU cooler and the motherboard. We truly appreciate your feedback. If you would like to discuss this further, please do not hesitate to reach out to us at: customerloyalty@asus.com and provide this link for reference. Our Customer Loyalty team is dedicated to providing a resolution for you. Happy Holidays. Thank you for choosing ASUS! Best Regards, Lamoya ASUS Customer Loyalty US Support
michael r.
Ownership: 1 month to 1 year
Verified Owner
Awful network support, RAM is ok, CPU and GPU are great2/22/2020 11:41:46 PM

Cons: -I've had to reinstall windows twice on this thing due to the Wireless internet, wired internet, and bluetooth simultaneously going out. Microsoft might be partially to blame as its from windows updates, but know the windows updates won't play nice with this network. -If I setup more than two bluetooth devices than both devices will start to stutter and become unusable. Must have really cheaped out with the network device. -Ram is only 2666. This means in Ram heavy games like Overwatch, its actually the RAM that will hold you back even though the GPU and CPU are fine.

Overall Review: Do yourself a favor and get a PC with a better network card and RAM.

3 out of 3 people found this review helpful. Did you?
Manufacturer Response:
Dear Michael R, Firstly, we would like to extend our sincerest apologies for the wireless connection, Bluetooth, wired Internet connection and the Ram. We truly apologize for the inconvenience this has caused you. The router undergoes intensive quality control testing and final inspections for both hardware and software before we send it out to the stores worldwide. We also provide warranty for the unit in order to fix or repair any isolated factory escape defect. Rest assured this information will be passed on to our development team. We are very happy to know that your pleased with the device CPU and GPU. We will be happy to assist you with the issue your having. After completing a windows update, we are recommending to reinstall the latest Wireless, LAN and Bluetooth driver from the ASUS website, please select the link provided and follow the steps below. 1.Click on the links to save the files to install go to your downloads folder. 2.Right click the zipped folder after the download is completed. 3.Choose 'Extract All'. 4.Open the NEW unzipped folder that was just created. 5.Run 'Setup.EXE' file or 'PNPINST64' and the file type should be listed as an "Application'. 6.Reboot the system after the installation is complete. We truly appreciate your feedback. If you need any further assistance, please don't hesitate to contact us via email at: customerloyalty@asus.com and provide this link for reference or contact our general support at https://www.asus.com/us/support. Our customer loyalty department is dedicated to bringing a resolution to all issues related to our products. Thank you for choosing ASUS! Best Regards, Lamoya ASUS Customer Loyalty US Support [ASUS support/ Drivers & Tools] https://www.asus.com/us/Tower-PCs/ROG-Strix-GL10DH/HelpDesk_Download/
Anonymous
Ownership: 1 week to 1 month
Verified Owner
Nice and Fast But still some Difficulties4/17/2020 2:02:49 PM

Pros: Runs mostly all games I own quickly and efficiently Great computer

Cons: Was programmed in Spanish and who ever set it up made an Administrator account that couldn't be accessed so it required a whole factory reset.

Overall Review: Would recommend it to friends if they don't care for set up time.

Overall Review: Bought at a nice discount for Black Friday and it’s exceeding my expectations. Runs everything at max settings and never a single hiccup. Definitely recommend!

Pros: -Case, Parts, and RGB looks Nice -Running at desired specs -Does what I need it too

Cons: -Fans are a bit loud when running to higher limits on GPU and CPU, but not anything to really complain about -There's really nothing wrong with the RAM, it's really "JUST ENOUGH" to run everything else in your tower to full capacity (You'll likely wanna upgrade later on) -Not very modular for upgrades, (I got a new Hard Drive and will need to place a bay in there myself. I managed with my placement for now, until I can secure it better) Any non-board upgrades are going to require some serious space and cable management

Overall Review: -Great for an experienced gamer, or an intro-desktop for rendering. Works for everything I could imagine using it for, including GTAV at high settings, quicker render times, and more.

Pros: Runs fast. Bought this as my gaming computer to use with a Rift S. I have not tried the Rift, but other games work great so far. Minimal bloatware.

Cons: Only has 2 memory slots and no bays for another hard drive. I purchased a 3TB drive to install, but found there is no place to mount it. I have the drive loose in the only place it fits. I have been building computers for 20 years but, I got lazy and thought I would buy this one and upgrade the few things I wanted to change. Also, no place to put a DVD drive... the whole point of having a desktop is the ability to upgrade. so really the big complaint is about the case more than the guts of the PC.

Overall Review: So far works as advertised, would not buy again due to the lack of upgrade options.