OUT OF STOCK
Sold by: Newegg
Shipped by Newegg
This item is currently out of stock and it may or may not be restocked.
Out of Stock
Add To Wish ListFound on 10 wish lists 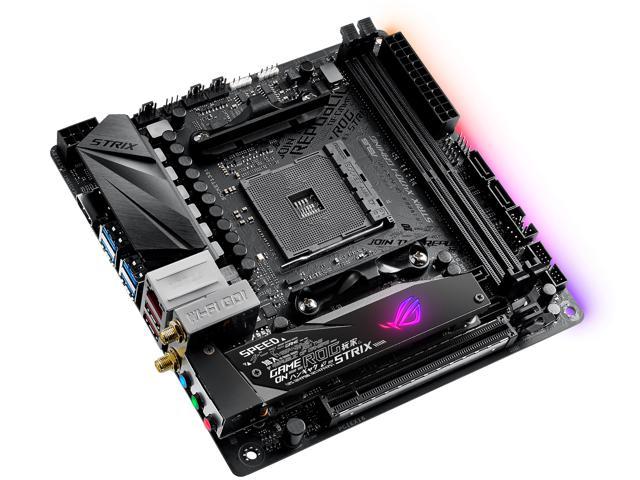 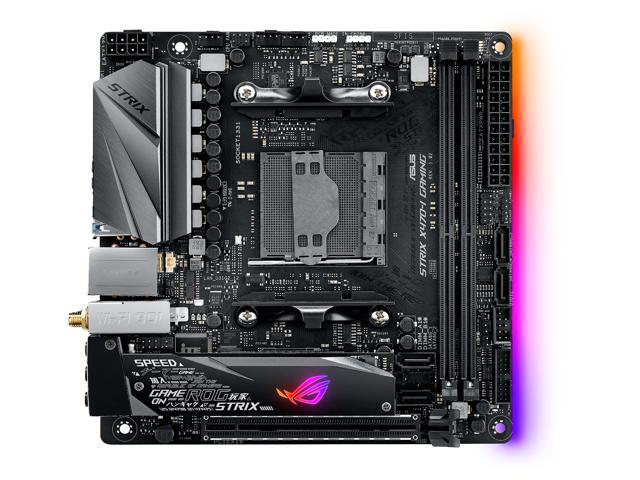 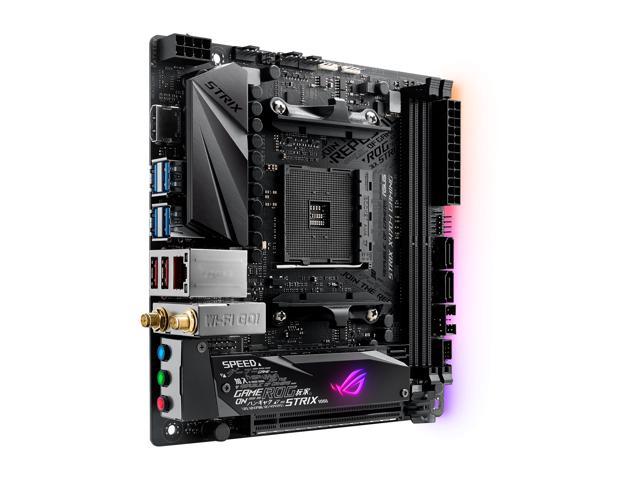 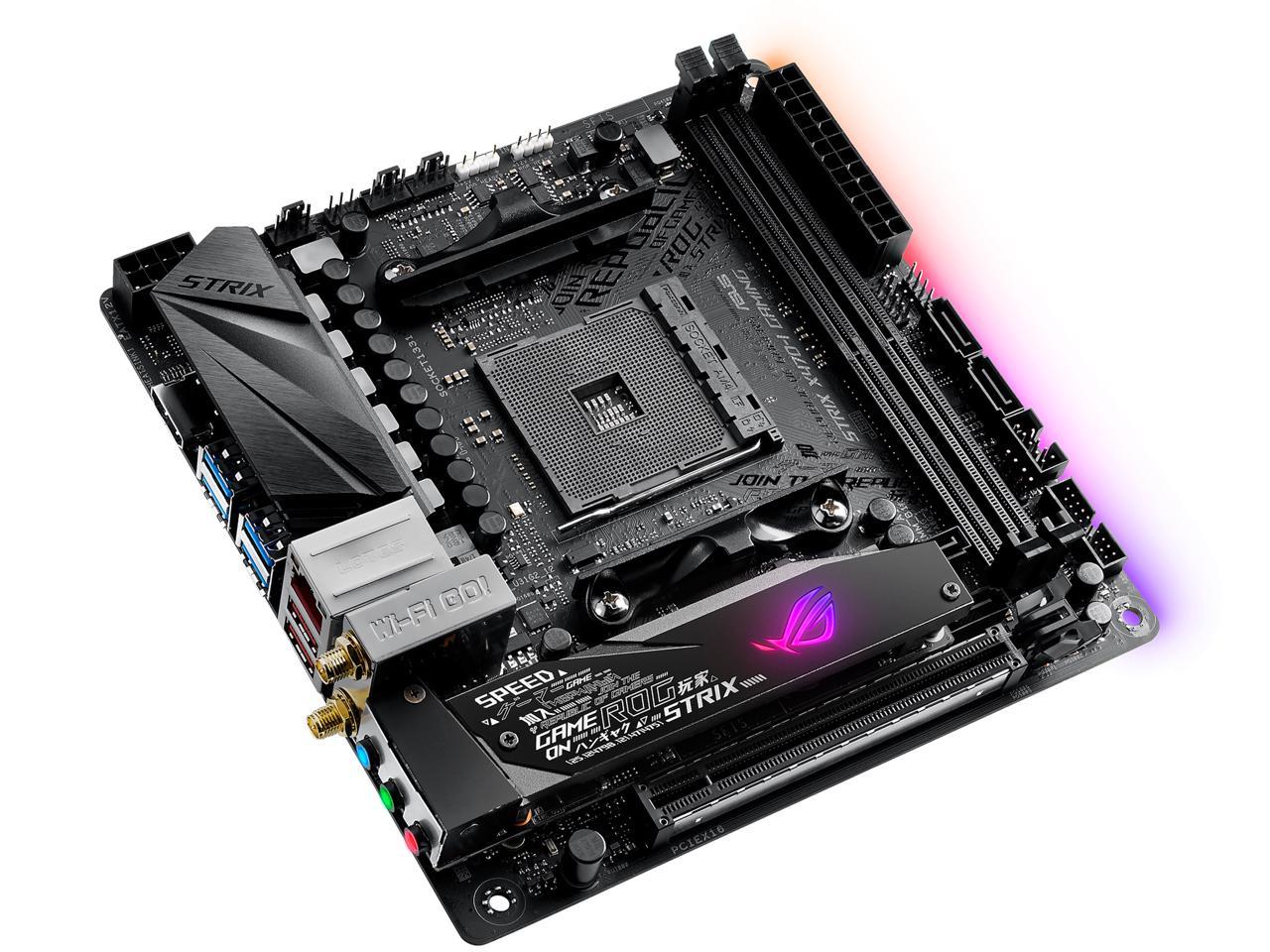 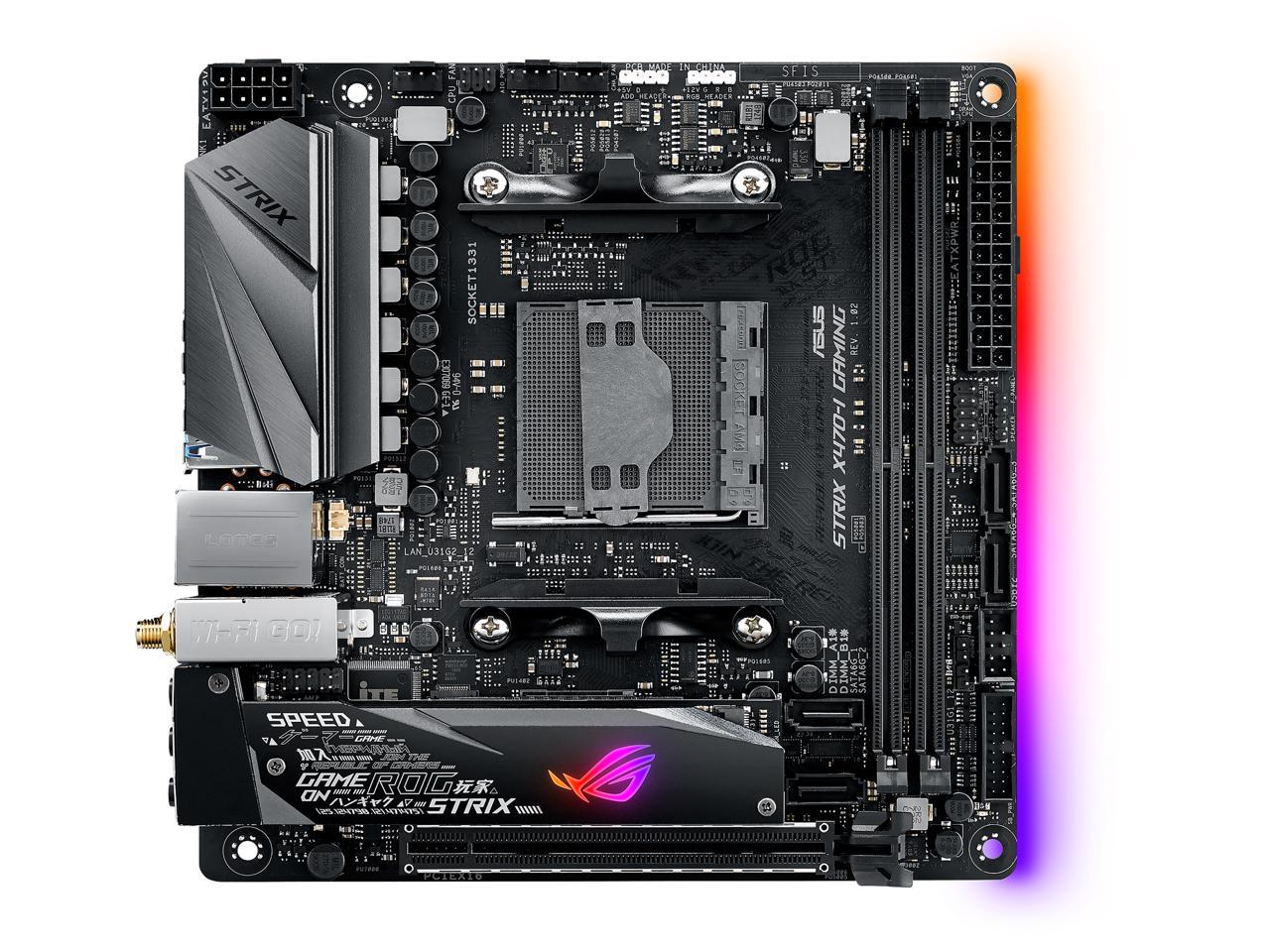 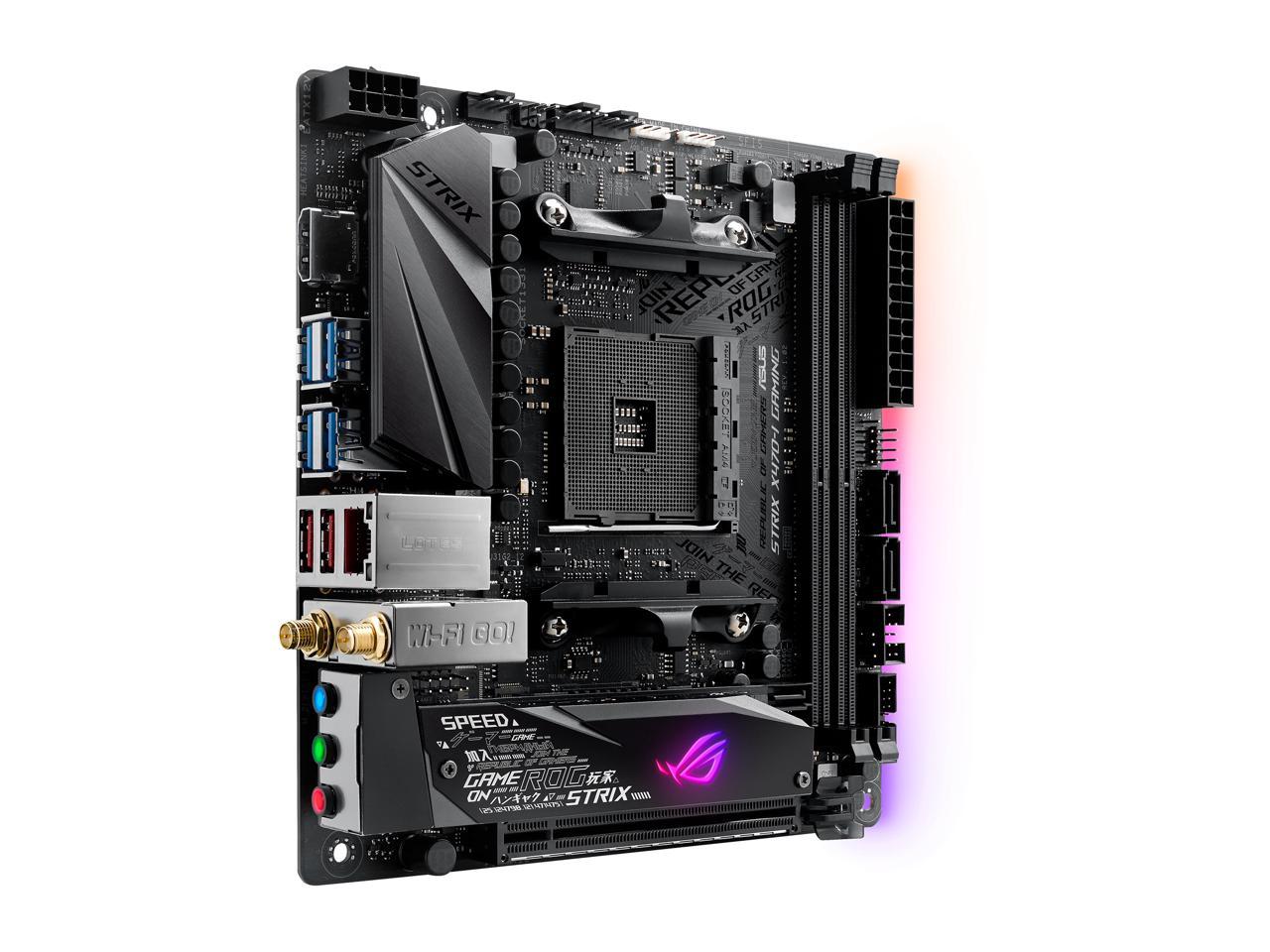 Pros: its a feature packed ITX form factor board. i was able to get a lot on it, and even thought i cooked the rgb header, but it was still fine, just the fan cooked. not headed well or labeled current directional hence the missing egg. figured it out, cost a 40 dollar fan. assembly in a phanteks evolv itx case was pretty straight forward even with it being a very tightly packed open loop, i have to say i have done and seen worse....far worse. aura sync works great with an ROG AURA SYNC led strip. i think that is why everyone hates the rgb, they went with another brand. everything mounted squarely and was assembled well. its a heavy and sturdy feeling board. the wifi antenna is a little awkward but was easily remedies with some 3m dual lock for a solid mount point. i like this board. i have had it for a while now and have put it through some rigorous testing. it holds up to the ROG name. id like to toss a third gen ryzen 7 in it soon to see what that puppy can do. overall i am happier than i was with my last intel asus rog Maximus impact series ITX system. but it too was a trooper and outlived its useful nature for me.

Cons: its a feature packed ITX form factor board. like i said before. theres little room to operate, so plan your build carefully and assemble as much as you can outside the case. the header for the power/reset switch and led indicators are poorly placed, and labeling is difficult to read, but upon further examination of the board, good job asus for finding a spot to put it. lol. this board is complex and so feature rich... to the point that the BIOS is darn near a game all on its own. the fan headers leave much to be desired when it comes to distinct labeling on the board, and the functions in fan xpert. the header for a pump seems dedicated and when i plug in a fan, it is detected as a pump. FAIl!. thankfully it recognizes the EK pump/res as a pump and not a fan. lol. its a lil quirky, the latest bios update seems to patch just about anything flawed that is/was firmware related. its a good board, lots of haters on here, i thought it deserved an explanatory and honest review. i have been building custom systems professionally for almost ten years and chose this as my own rig for home.

Overall Review: no, i would not recommend this board......to anyone aside from advanced and experienced builders. due to its size, tightly packed super close components, initial BIOS issues OUT OF THE BOX (snickers... smh good thing i know to look for that...ASUS), and the learning curve just to navigate the board system is a heap to absorb just to build a gaming rig. that being said, its dope, and makes a fly ITX box. AURA SYNC is a nice lighting effect system when you use the AURA SYNC mag strip LED. with some hefty tuning and a large cooling mod, overclocked to a stable 4.32ghz, i was able to get a second gen ryzen seven to perform equally well as a 9th gen i7 9700x. i know you heard that. cinebench r20 score 4192, decimating an i7 9700KF by a whopping 600 points. so there you have it.

Pros: -Separate Audio board for clean audio. No conflicts with other components on board. -Separate M.2 board as well. -6 phase VRM keeps the board cool under load. -High speed memory support. 3600mhz, good for an ITX board. -Excellent BIOS and OC features. -Excellent board layout with fan headers, SATA connectors and other ports where they need to be. -On board Wifi and Bluetooth both work flawlessly.

Overall Review: I have now built two systems with this board. One 2600X with a 980ti, and one 2600x with an RX480. Both systems were built in very small form factor cases. One in a Node 202, the other in a Cooler Master Elite 130. Both had outstanding performance and ran surprisingly cool for ITX case builds. As long as you purchase the correct compatible memory and put the right CPU cooler on this board, you will not be disappointed. Also, its advisable to register your board with Asus when you buy it. If you do have any issues they are pretty good about replacing boards if it was registered.

Pros: -Small and powerful with full features of an atx board -nice onboard rgb features

Cons: -On-board wi-fi card went bad early on (took an egg off for that) -Dealing with ASUS support (Yes I know I can plug in an Ethernet cable!! That's not the point!)

Overall Review: Following up with what's happened since intitial RMA, I've recieved 2 boards back in 2 months time and one failed 2 days after putting the PC back together and the latest has a faulty ram slot. I wanted this to be a good experience using my first ASUS ROG product, but if slow RMA process and faulty replacements are the norm then I want no part of this company.

Cons: Broke after 8 months. Sent to ASUS for warranty claim, they sent me pictures that it was physically damaged from the bottom of the motherboard. BOTTOM. Where it is secured to the PC case. ASUS warranty denied claim since they've blamed me for the "physical" damage at the bottom that somehow working for 8 months, it was damaged.

Overall Review: I've been a long time DIY'er and have purchased many brands throughout my 20+ years of PC building. To have a denial, because of possible QC issues with the capacitor at the bottom of the Mobo is surprising. Never going to buy an Asus product ever again, they've lost a long time customer.

Cons: - The PCIx slot seems to be 3mm too high and 3mm too far back to reach properly in the Corsair 1000D case mounts properly. Put a lot of strain on the board to get my 1080 ti to mount properly. - No USB-C motherboard connector - Second m.2 slot is on the bottom which means removing the board to get at it and you might have some clearance issues. - Some of the RGB LED effects are hidden if you have a PCIx card installed, lowing their value.

Overall Review: - DAC and audio connections are very basic - 8 pin CPU connector in the corner is not in the most convenient location. Not a deal breaker but annoying. - Wish it had a DisplayPort connector instead of HDMI for AGPUs - The IO shield isn't attached to the board like the more premium ASUS boards - 3rd and 4th SATA connector is behind the ram. Probably not going for looks if you are making the ITX into a NAS but hard to make look clean otherwise.

Cons: Wifi antenna broke, the base that holds it snapped. (user error) Thought I was being gentle with it but the slightest bit of force on it broke it. No problem for me, super glue fixed it.

Overall Review: Highly recommend for all pc builders. Easy set up and with pro user options for more experienced builders.

Overall Review: It was a good board but has been replaced with a B550 Board that has PCI 4.0

Did you find this review helpful?
Manufacturer Response:
Dear Valued Customer, It's unfortunate to hear you're not completely satisfied with your motherboard. Try clearing your CMOS by removing the disk-like battery while your system is completely powered down and unplugged. You can also try enabling fast boot. If the issues persist, feel free to contact me if you have any technical or general questions. You can reach me at cl-adrian@asus.com. Your case for reference is N2012009844. Thank you for choosing ASUS! Best Regards, Adrian ASUS Customer Loyalty – US Support
Anonymous
Ownership: more than 1 year
Verified Owner
Excellent board, full featured, but no reason to get x470, just buy B450.10/23/2019 8:26:21 AM

Cons: -Using both M.2 slots drops the graphics card down to x8 instead of x16 (this is not an issue at all in gaming but may affect other workloads if I recall from Gamersnexus testing). -No USB C / Thunderbolt -No Optical audio

Overall Review: I have been running a 2700x at 4.2ghz all cores at 1.35, 3000mhz memory (XMP no issue) and an overclocked 1080ti with a custom loop and 4 fans with a controller on this board with no VRM or instability issues for over a full year now. The board is very nice but at too expensive at 200. You don't make use of the features of the x470 chipset on ITX, just get the B450 version (it likely has the same VRM and everything. I have also had the Asrock B450 board with a 2400G overclocked and also enjoyed that board for literally half the price.