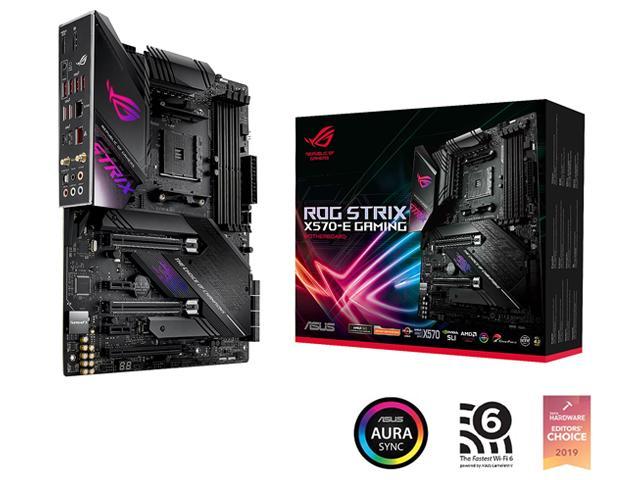 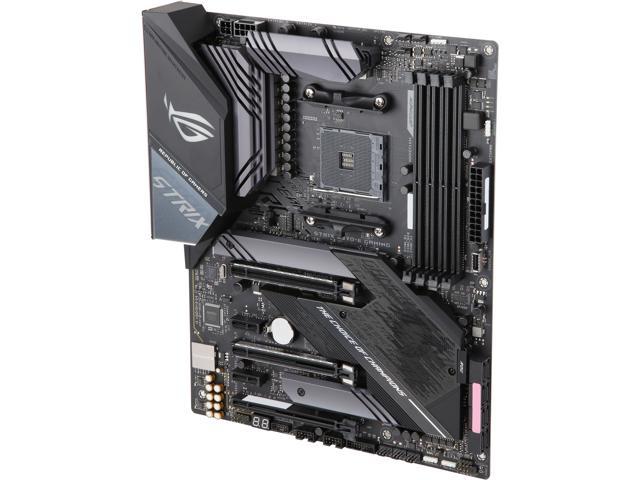 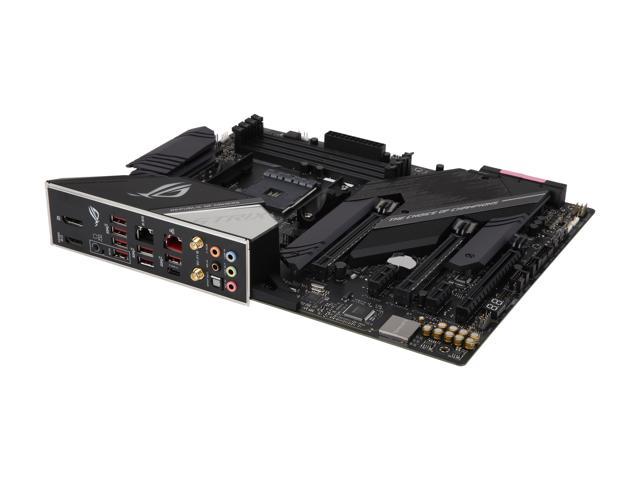 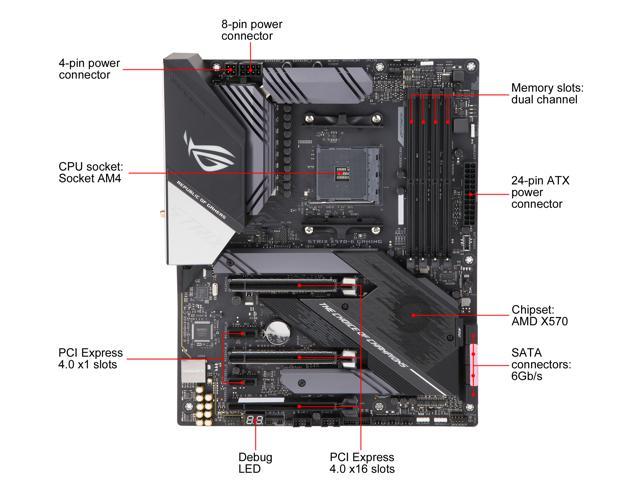 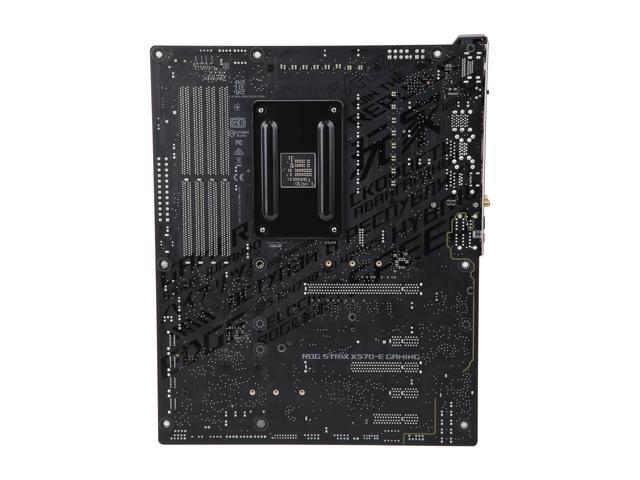 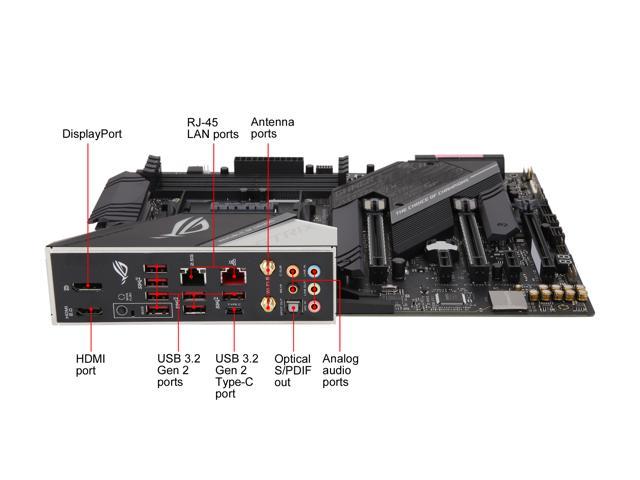 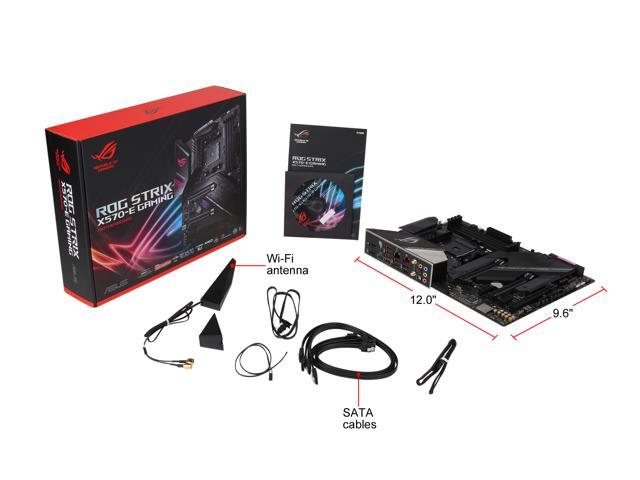 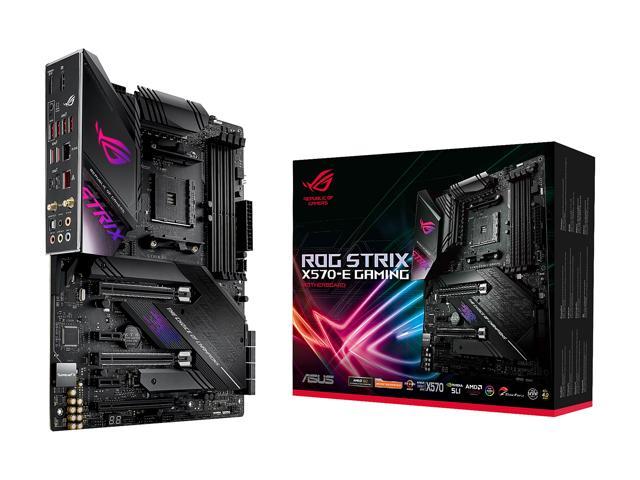 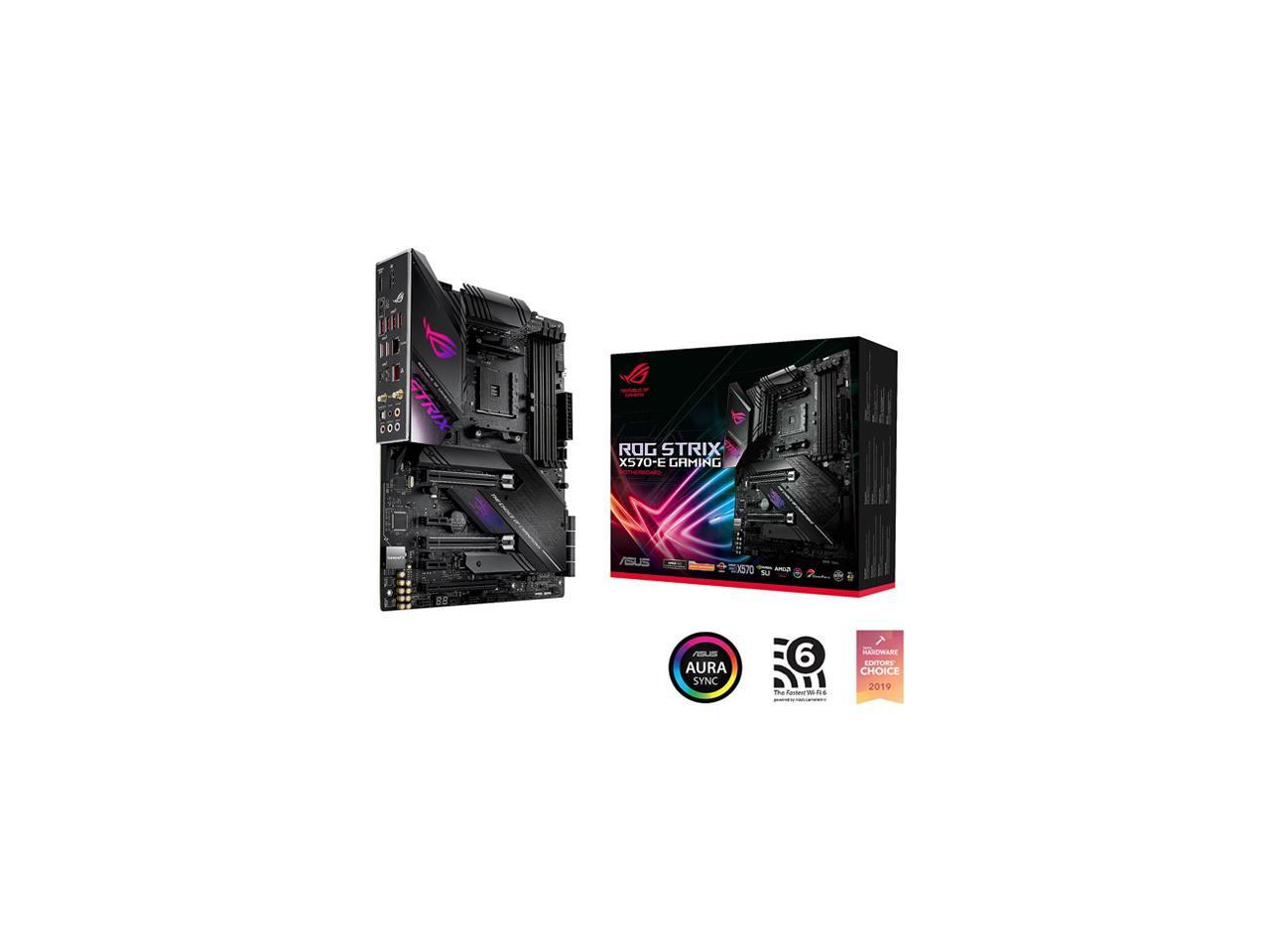 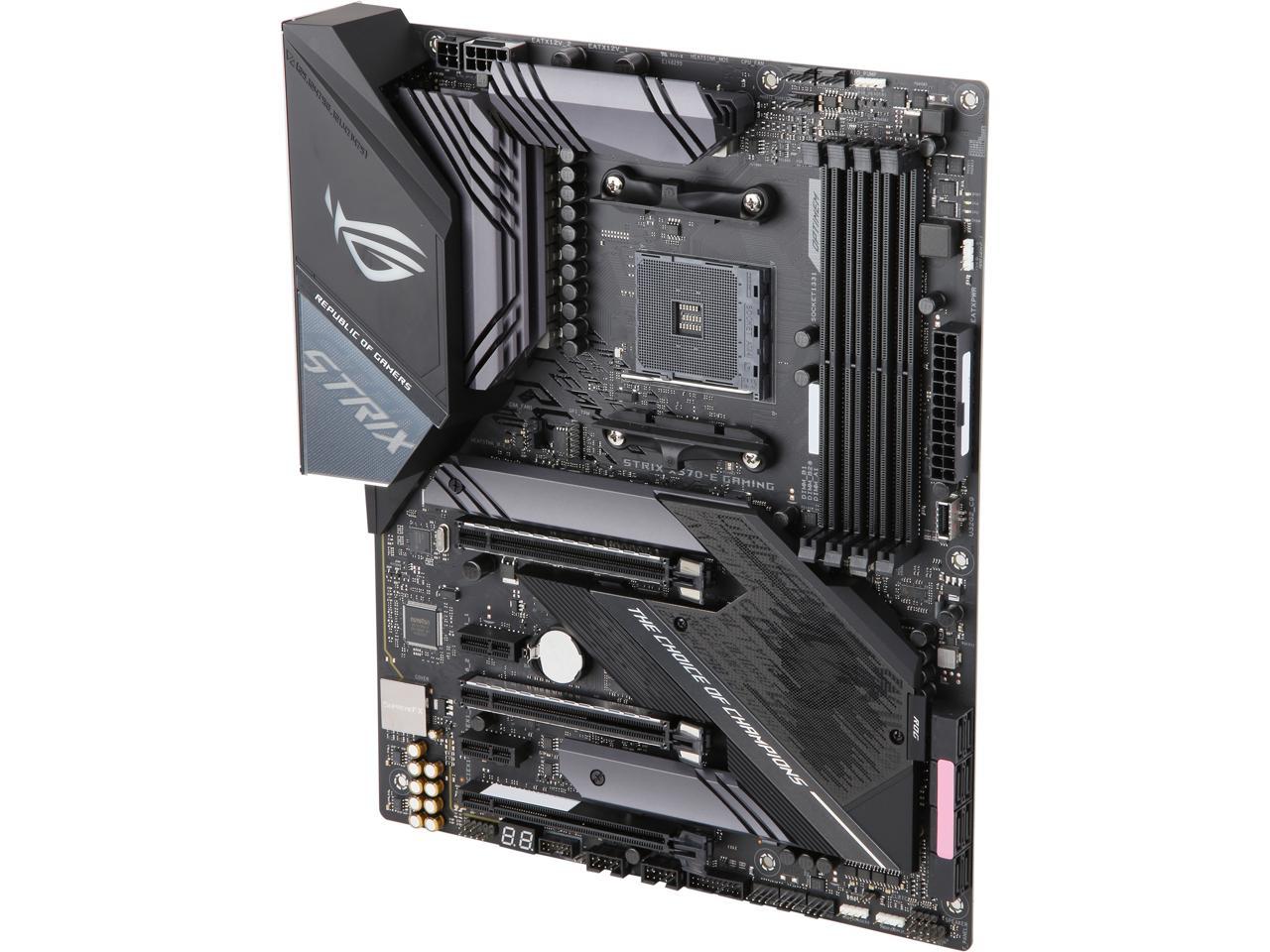 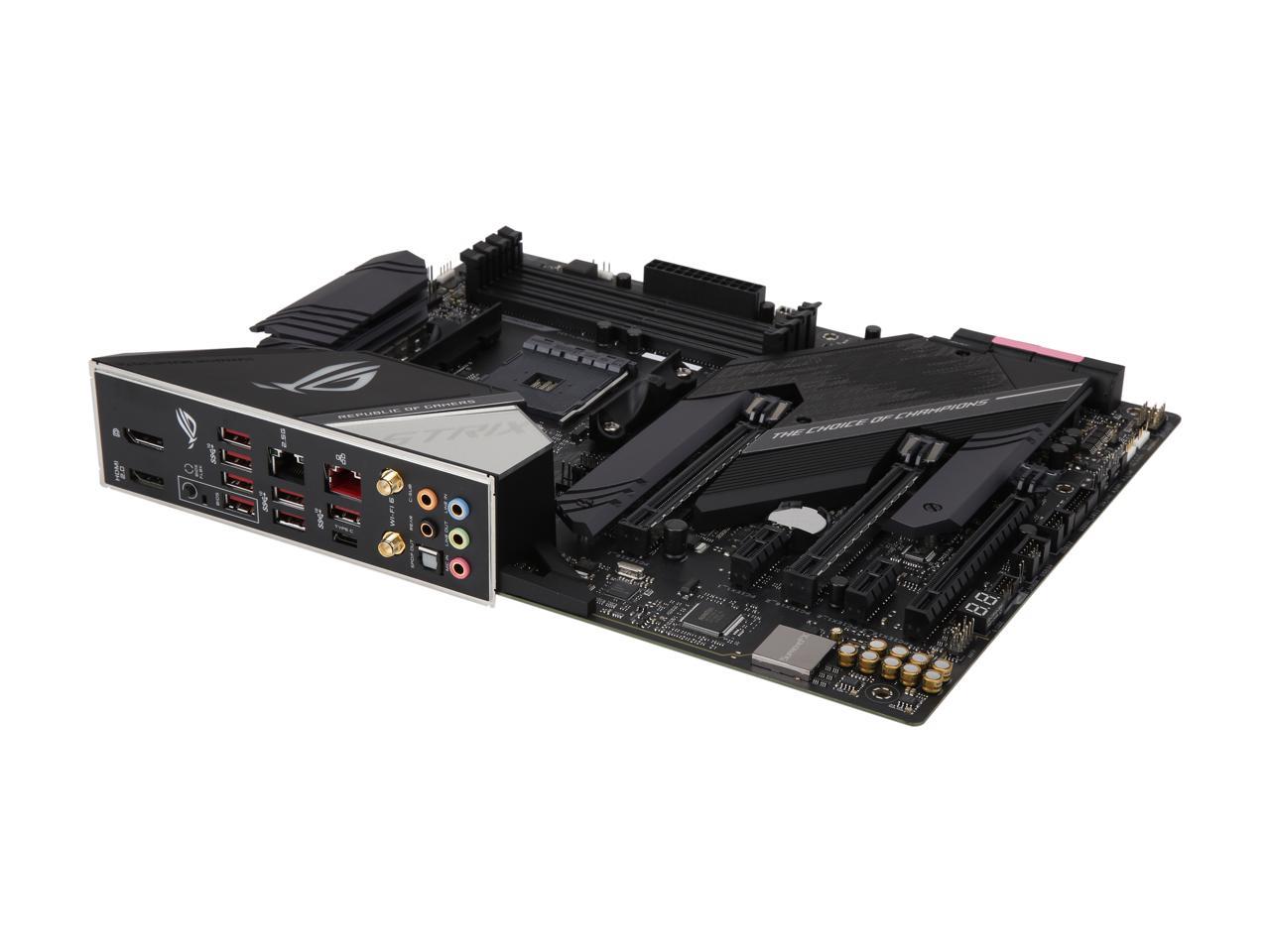 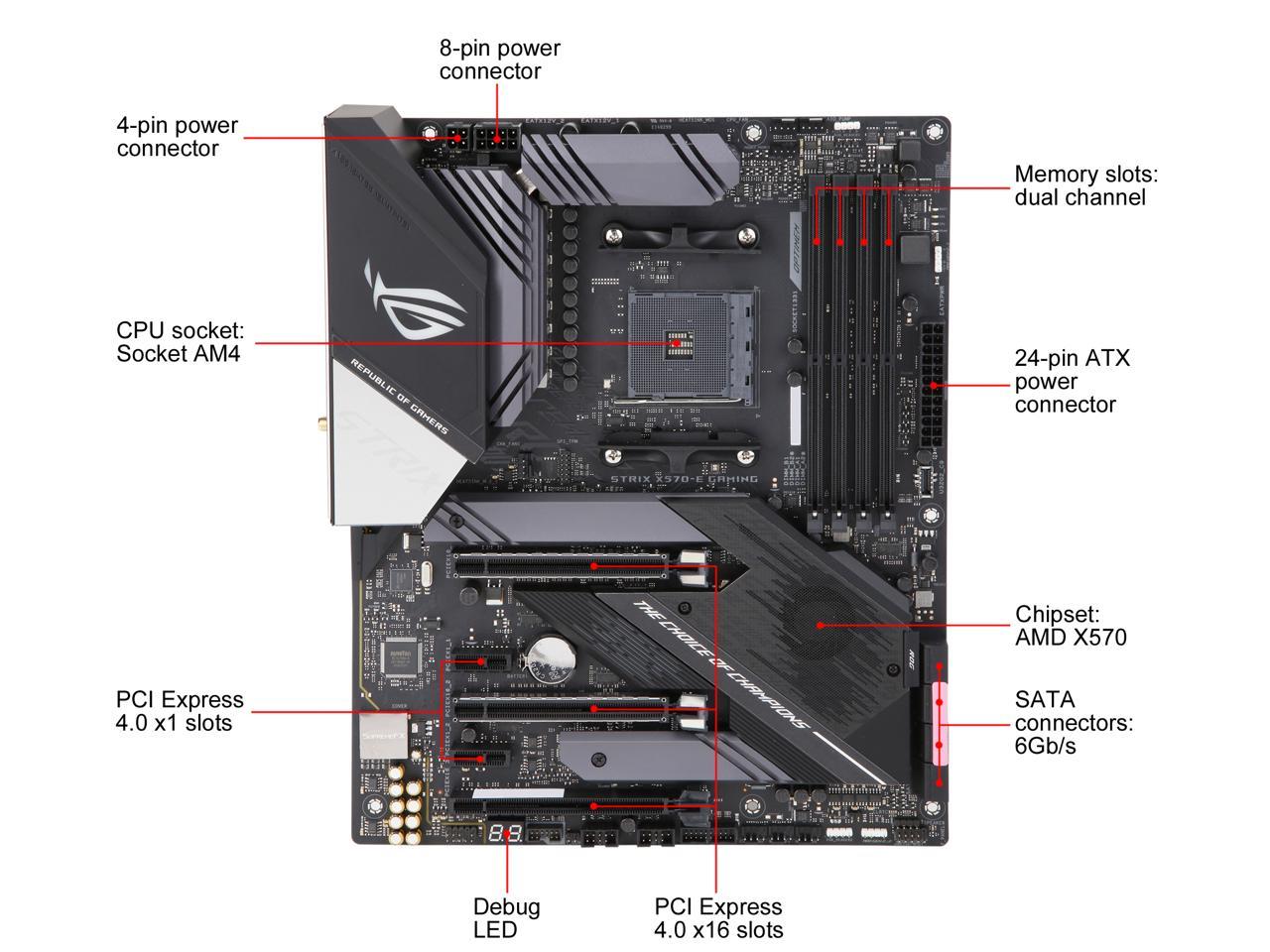 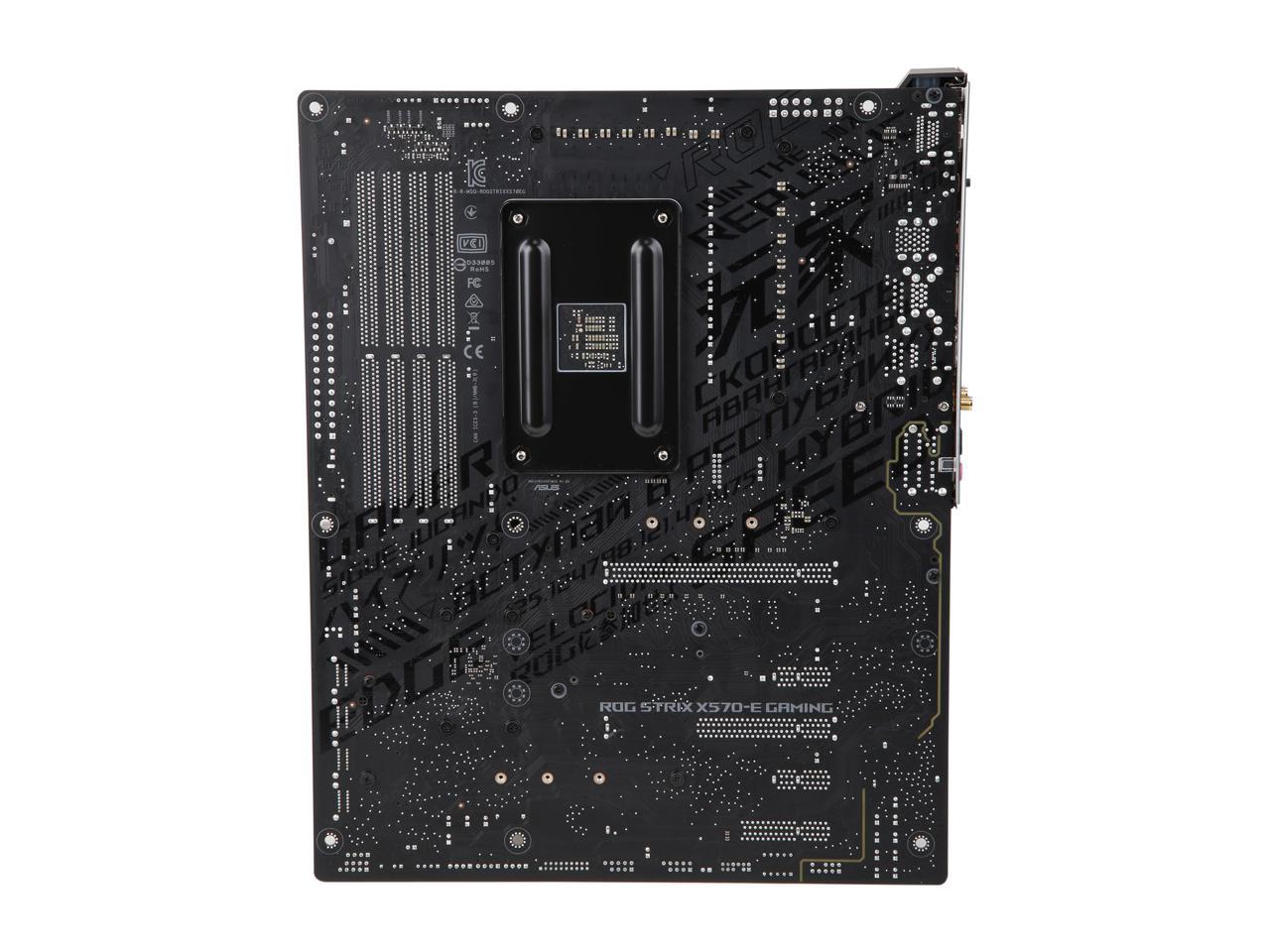 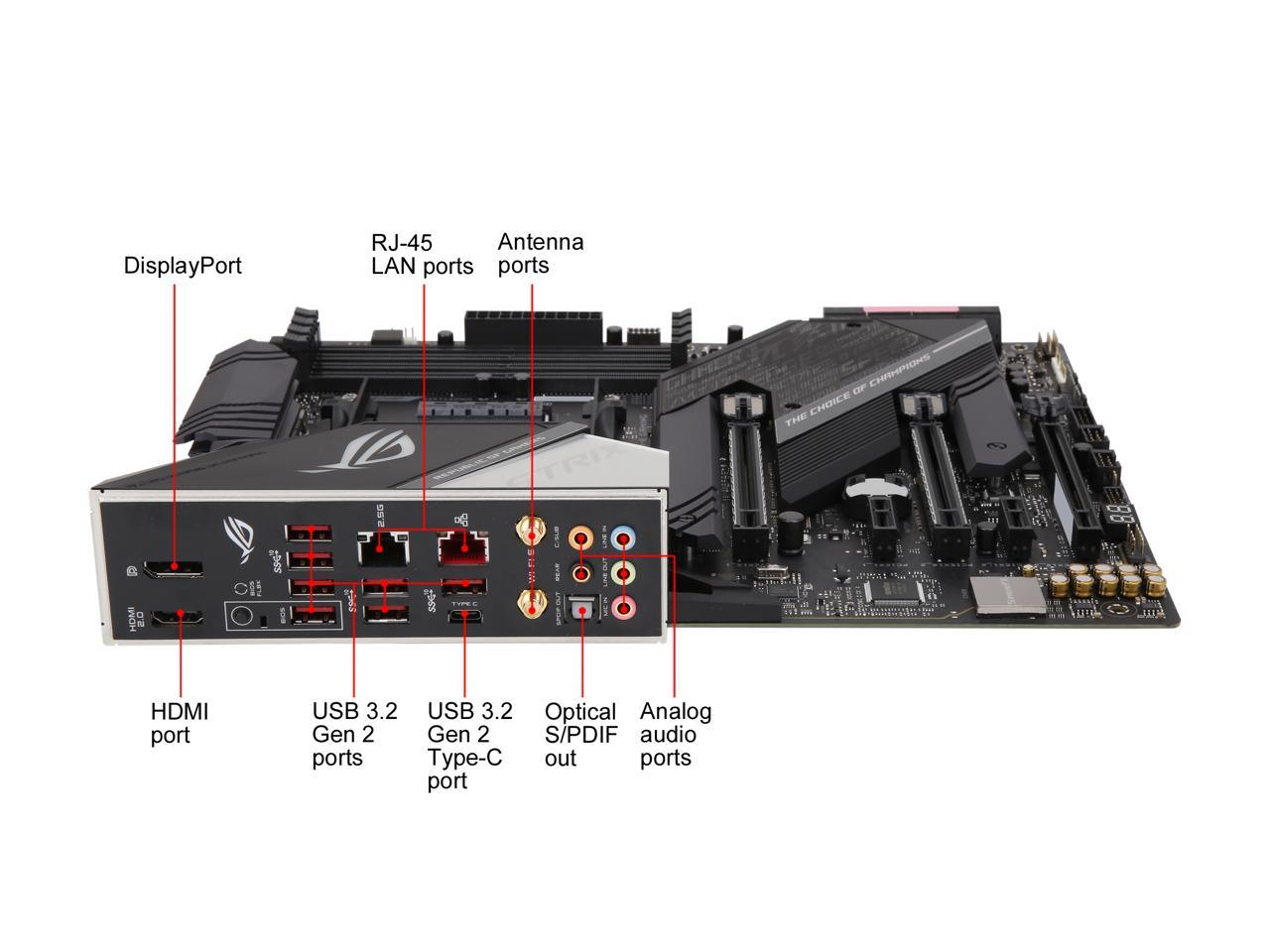 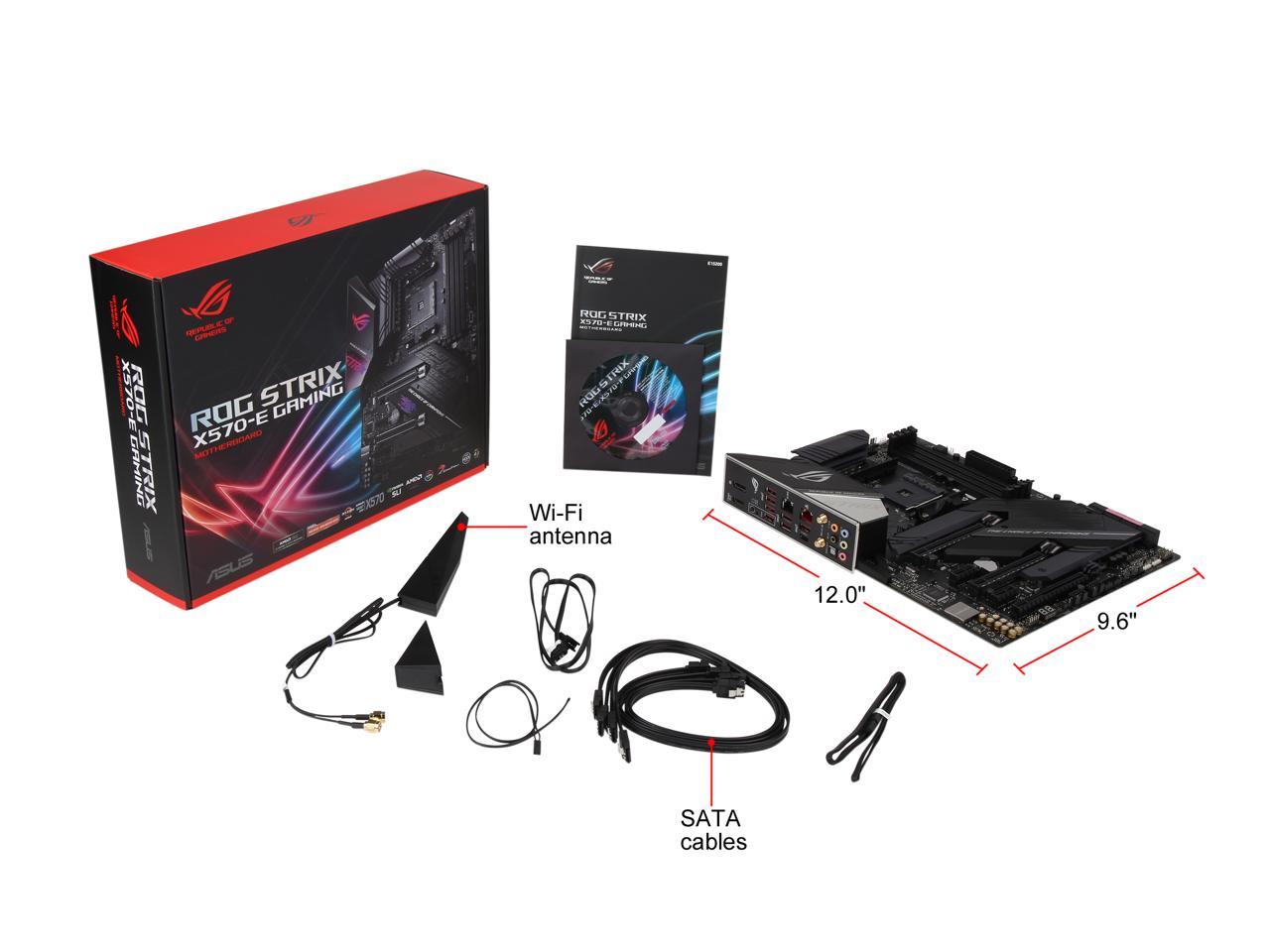 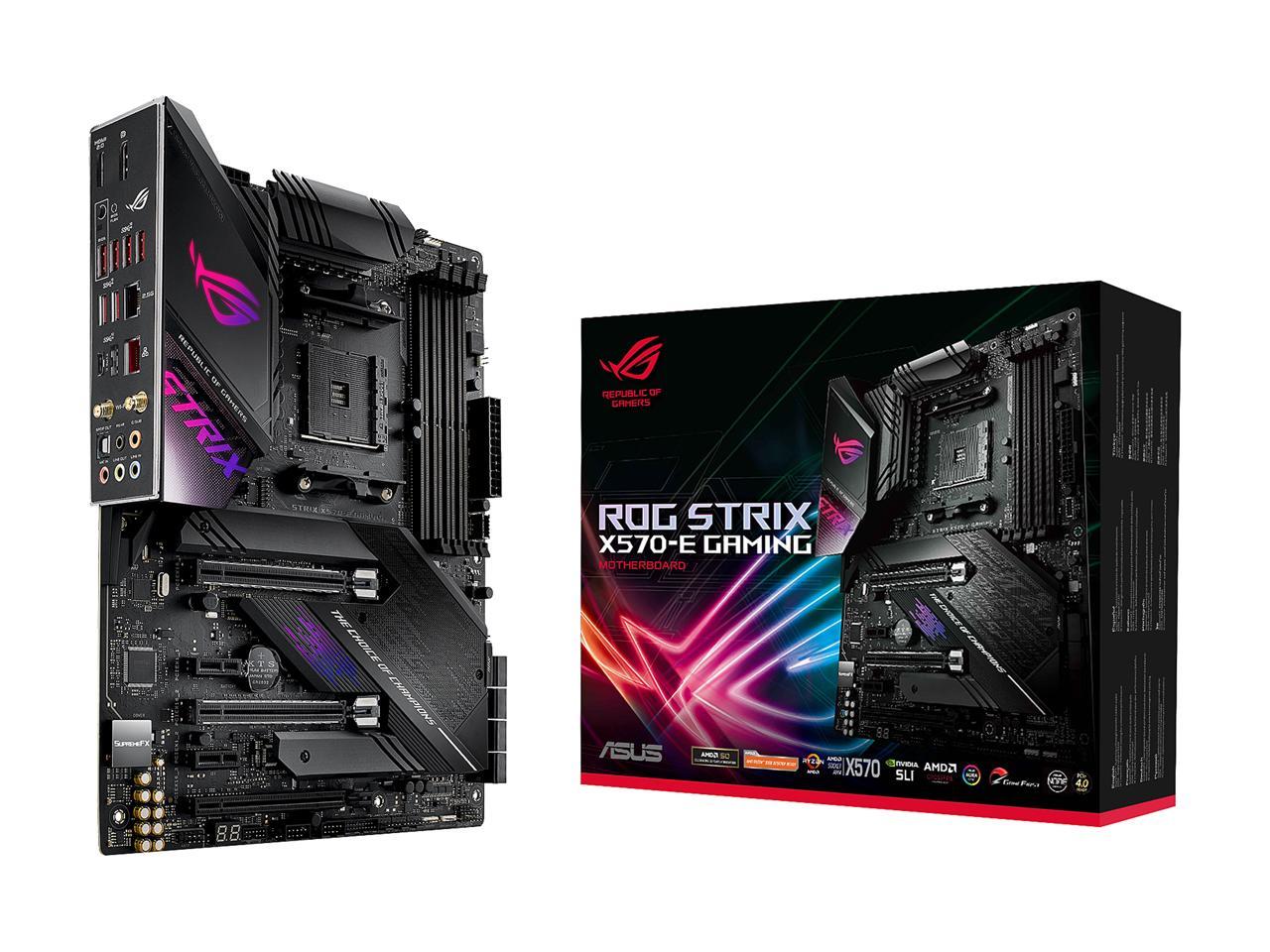 Pros: Tons of IO options. Good looking. Easy set up. Well placed fan headers. Asus has good bios support (already at 4 for this board). Performance seams to be okay, will need more time to evaluate. will probably update this review in the future.

Cons: Priced a little high compared with competitors. Should have at least 2 more fan headers. Software is so-so Does not report temperature or core voltage accurately. Aura controls are a part of Armor Crate unless you download off of web site and are less robust.

Overall Review: Have it paired with a R9 3900X. Having everything on "auto" in the bios yields 4400 MHZ observed in boost speeds and an all core between 4 GHz and 4.2 GHz. The way the 3000 series handle boost is a bit wonky, and some software seems to cause these processors to remain in the boost state regardless of load. Growing Pains! CPUZ isn't reporting voltage accurately either. VRM quality on most of these X570 boards do seem to extract a bit more performance out of these chips. Build: R9 3900X ROG Strix x570-E 32 Gig G.Skill Trident Z 3200MHz Strix Vega 56 500 Gig WD Black NVMe, 1TB WD Blue SATA SSD Toshiba 4TB, 5TB HD's Corsair RM850 PSU Cooler Master ML240R cooler Phanteks Enthoo Pro M SE case

Pros: A lot of USB ports. 8 SATA ports (a must for my build preference). Stable (only after using RAM that is listed as compatible). Nice looking. Hefty, solid feel.

Cons: If you have some random stability issues, check your RAM for compatibility. ~Explained~ After initial build it seemed solid for about a week, then began to freeze at random times (sometimes at idle just doing file management, sometimes at 100% load). Over time it became more unstable and eventually unusable. I had upgraded from an X-99 build and used my old DDR4 3000 RAM. Decided to see if it was on the motherboard compatibility list on Asus's website and it was NOT. I bought some RAM that IS on the QVL and what do you know, 100% stable all the time over a month now. *Asus Armory Crate setting in the BIOS actually injects an .exe file INTO the operating system at boot unless disabled. Bad Asus, Bad.

Overall Review: I have been building systems since 1999, and have done well over 1000 builds (literally). I therefore should have checked the RAM compatibility before blindly using my old RAM. However I was unable to afford new RAM initially so it was more of a "hope it works" situation. This board turned out to be a solid pick after making sure to use RAM that is actually on the QVL from Asus's website. 100% load for extended periods and stable always now. My case has 6 external drive bays and am still using a SATA drive for the OS, therefore a motherboard with 8 SATA ports was necessary for my build. The board boots a little slower (about 7 seconds) than my old (still in use) Z-97 build. Looking at why it seems to be a DDR4 specific POST time increase that is universal and, apparently, unavoidable. I therefore will not deduct an egg from the board, as it is a DDR4 universal problem. Running a R7 3700X with a Noctua NH-D14 is better on this than it was with a Z-97 build because RAM of the same height clears the cooler on an AM4 (Trident Z) but would not on a Z-97 (Trident X). Going from the Wraith Prism to a Noctua NH-D14 made a noticeable difference in overall performance and temps system wide (as it keeps the internal case temps lower). Waited till I could hash out any problems (was all RAM) and verify it is a stable, solid build before posting a review. Overall I would recommend the board if you pay attention to and therefore avoid the cons. Build: Strix X570-E (latest BIOS and drivers) 16 GB Trident-Z 3600 (CL 16-16-16) R7 3700X Noctua NH-D14 GTX 970 Samsung 850 Pro 256 Multiple HDD EVGA 750 Supernova G2 Win 10 Pro

Pros: Built quality. All the features and extras. Great for upgrading over the years with new CPU or extra RAM.

Cons: Not a hardware con but a software one. Make sure you update to the latest bios/firmware using the Asus website and not the Asus software that you install or you'll be behind many months.

Overall Review: It's been 6 years since my last build but the most notable features are the Wifi/Blutooth Connectivity and the 2 M.2Nvme SSD slots. The Wifi and Blutooth connectivity are very easy to establish and work Perfectly, I have my Router on the other side of my apartment and the connection still perform like a Wired connection. I opted for a quality Headset instead of speakers for this build and bought a Blutooth compatible set, it too seems to have no limits as far as distance. However, the biggest difference in performance from my last build is the M.2Nvme Drives. Stuff downloads so fast sometimes you hardly see the display screen open up before it's finished. The Original bios is steady enough but I updated to the latest and had to download the Driver off the site for the M.2Nvme drives. After all was said and done the performance is ROCK SOLID and I am totally satisfied with the outcome.

Overall Review: I like it. Would buy again. AMD has won the Super Bowl of systems this year.

Overall Review: Really great board and been using Asus since my first board. One small problem I had was south chipset were overheating and crashing in bios or when playing games. Noticed that thermal pad was not applied on top of the chipset and was miss placed by long shot. Causing my chipset to go up to 113C and crash. maybe a bad batch I guess. That is the only reason for 4 stars cause took me a week to figure out it was the chipset not my ram stick as each time crashing motherboard reports of bad ram and etc ...

Overall Review: This is a lightning fast motherboard as far as motherboards go. And despite folks having "troubles updating bios" that can all be summed up as extreme user-error. I had zero issues. BIOS update is as simple as just following the basic steps to flash it.

Overall Review: I keep getting the following errors, the second of which is the most prevalent. winload.efi error whea uncorrectable error I've changed the placement of my SSD from on the motherboard to standard. I've ran memory tests. I've tried fresh installs of my OS (Win 10) multiple times. I've tried other RAM sticks. Nothing helps. Pretty certain at this point that this is a MOBO issue. After looking at the drop in price from when I bought it, I assume others are dealing with this as well. DO NOT BUY this model until this is fixed by the manufacturer.

4 out of 4 people found this review helpful. Did you?
Manufacturer Response:
Dear Robert C., I'm sorry to hear that you are having persistent crashes with this motherboard. All ASUS products undergo intensive quality control, testing and inspections. What you've experienced was not intentional or representative of our brand. If you haven't already, please follow the link below to update your BIOS to 1408. I also recommend resetting CMOS. Once complete, your system should be stable. If you have any general or technical questions, please email me at cl-lane@asus.com and include case #N200589645 for reference. Thank you for choosing ASUS! Best regards, Lane ASUS Customer Loyalty – US Support