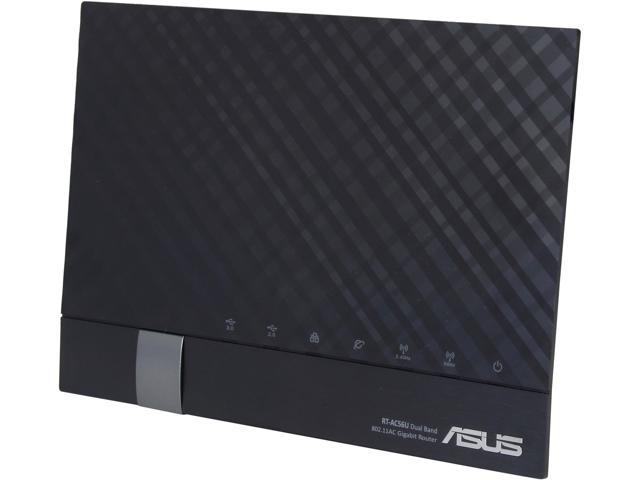 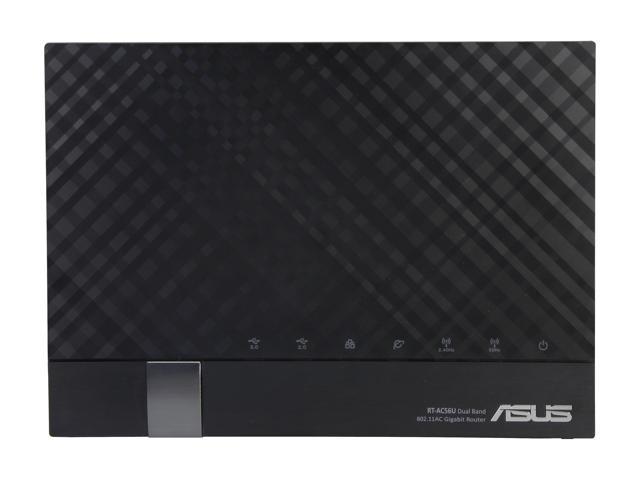 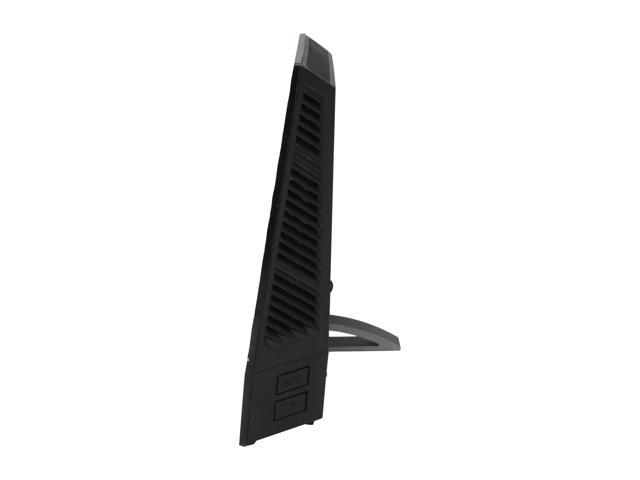 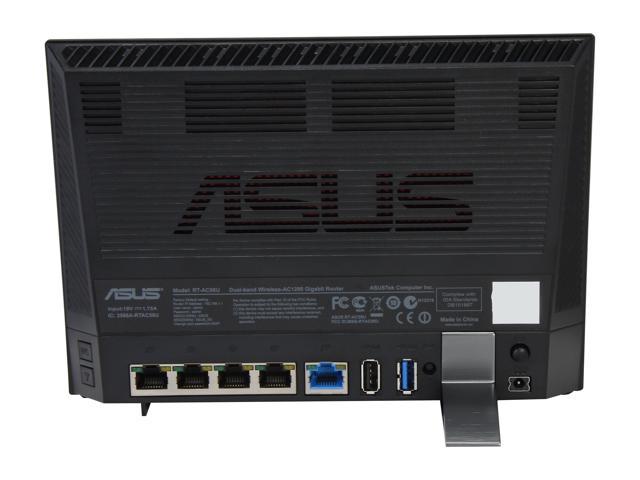 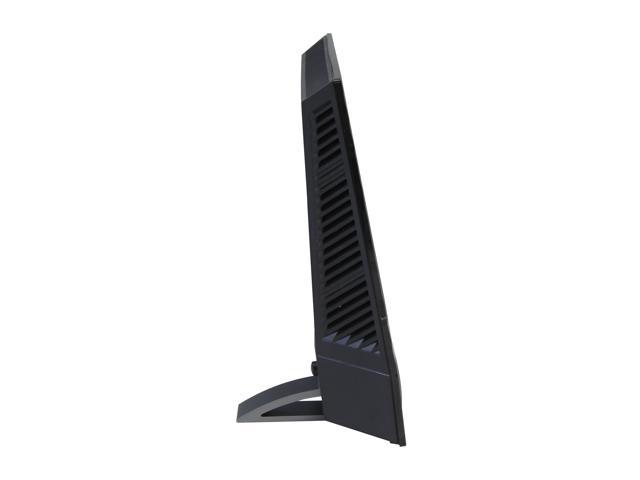 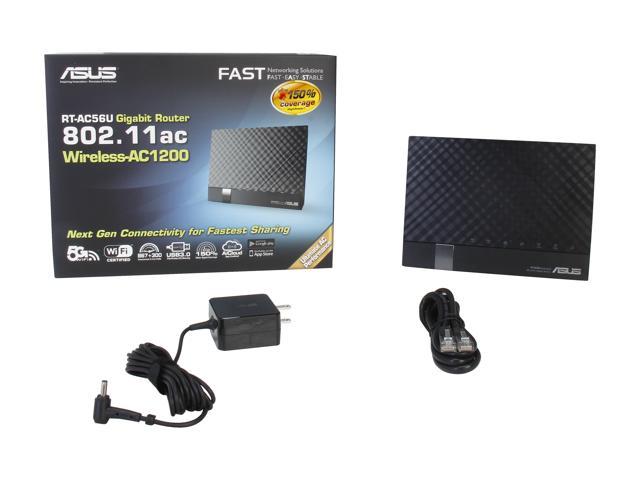 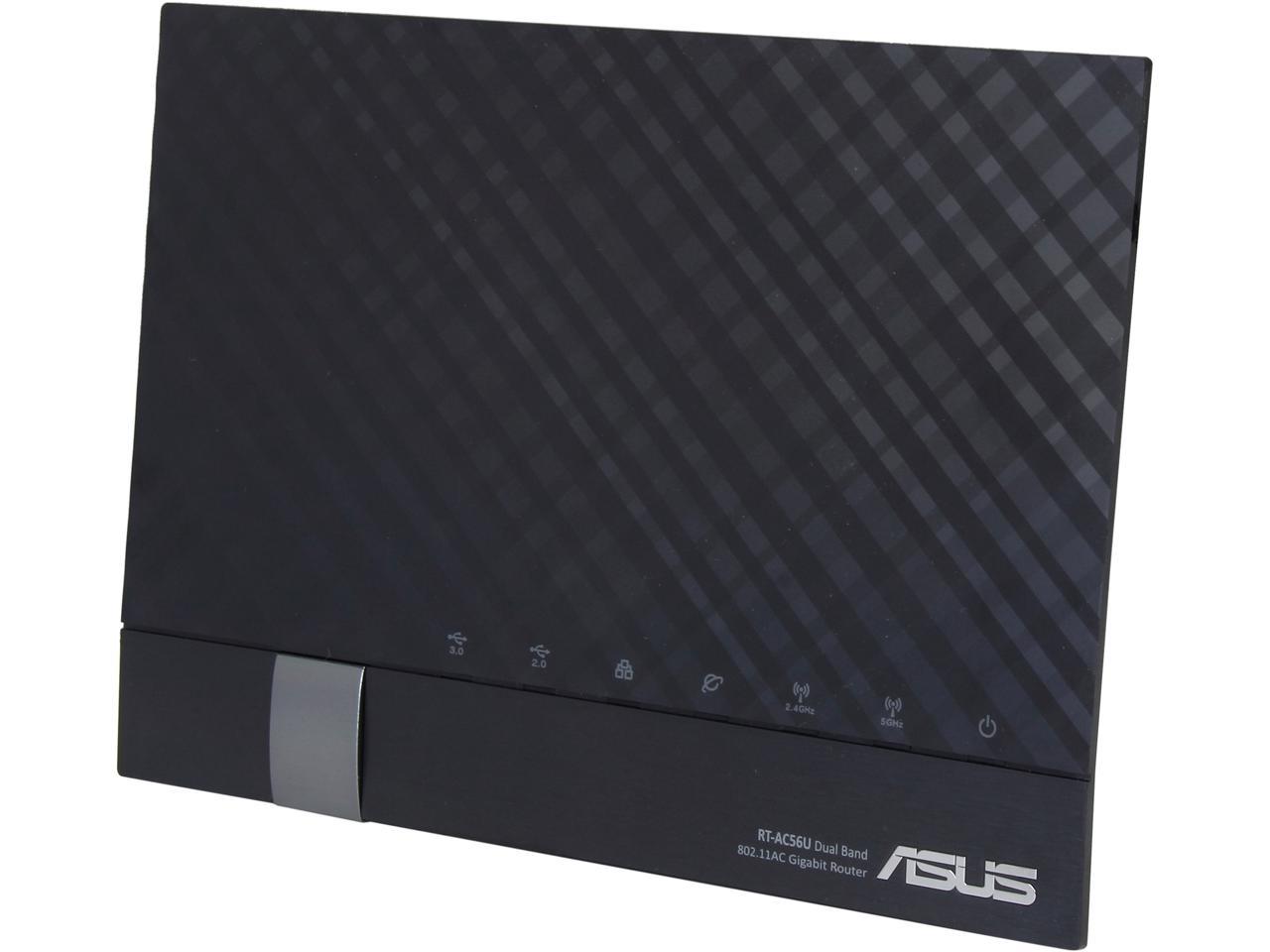 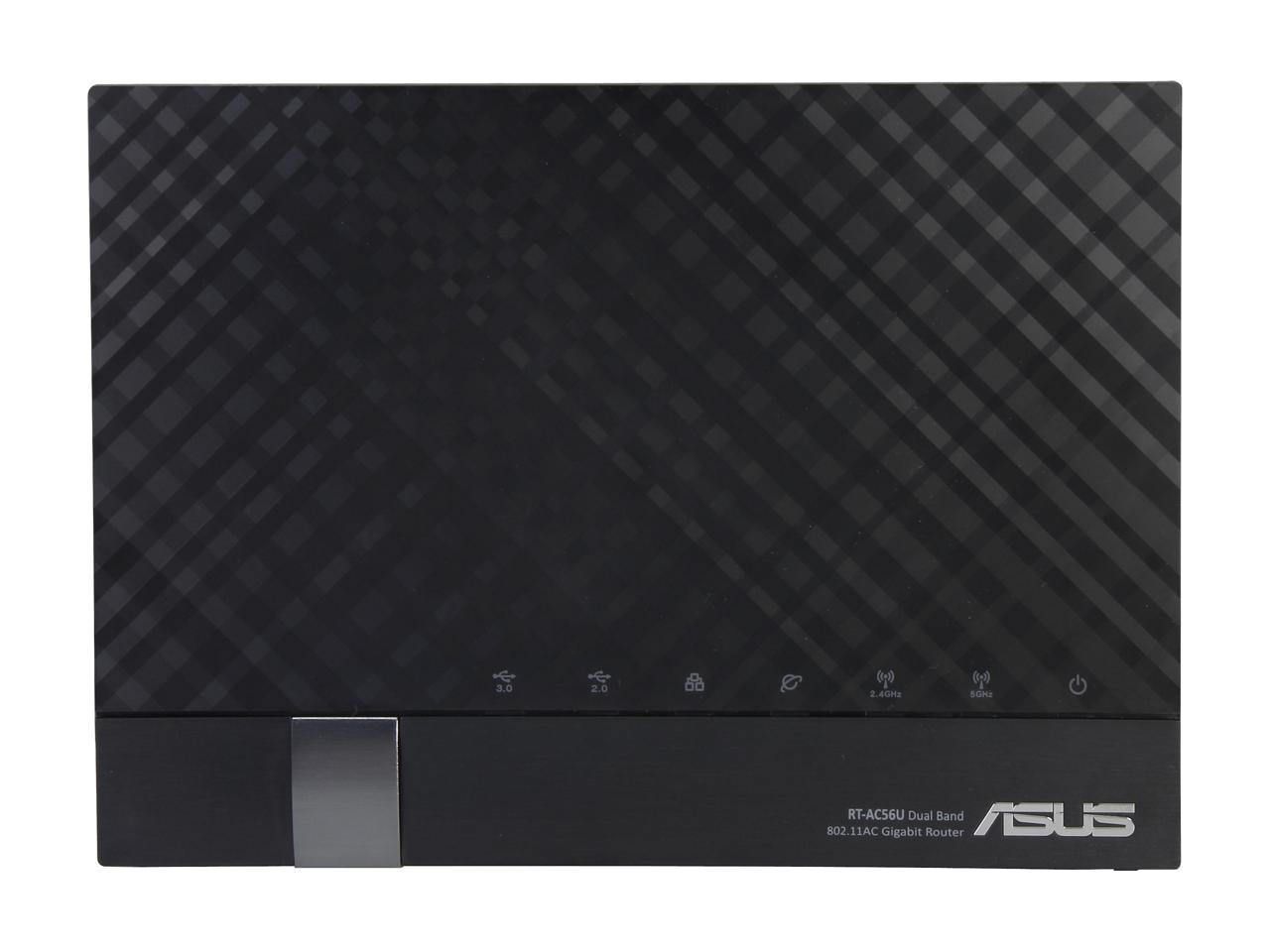 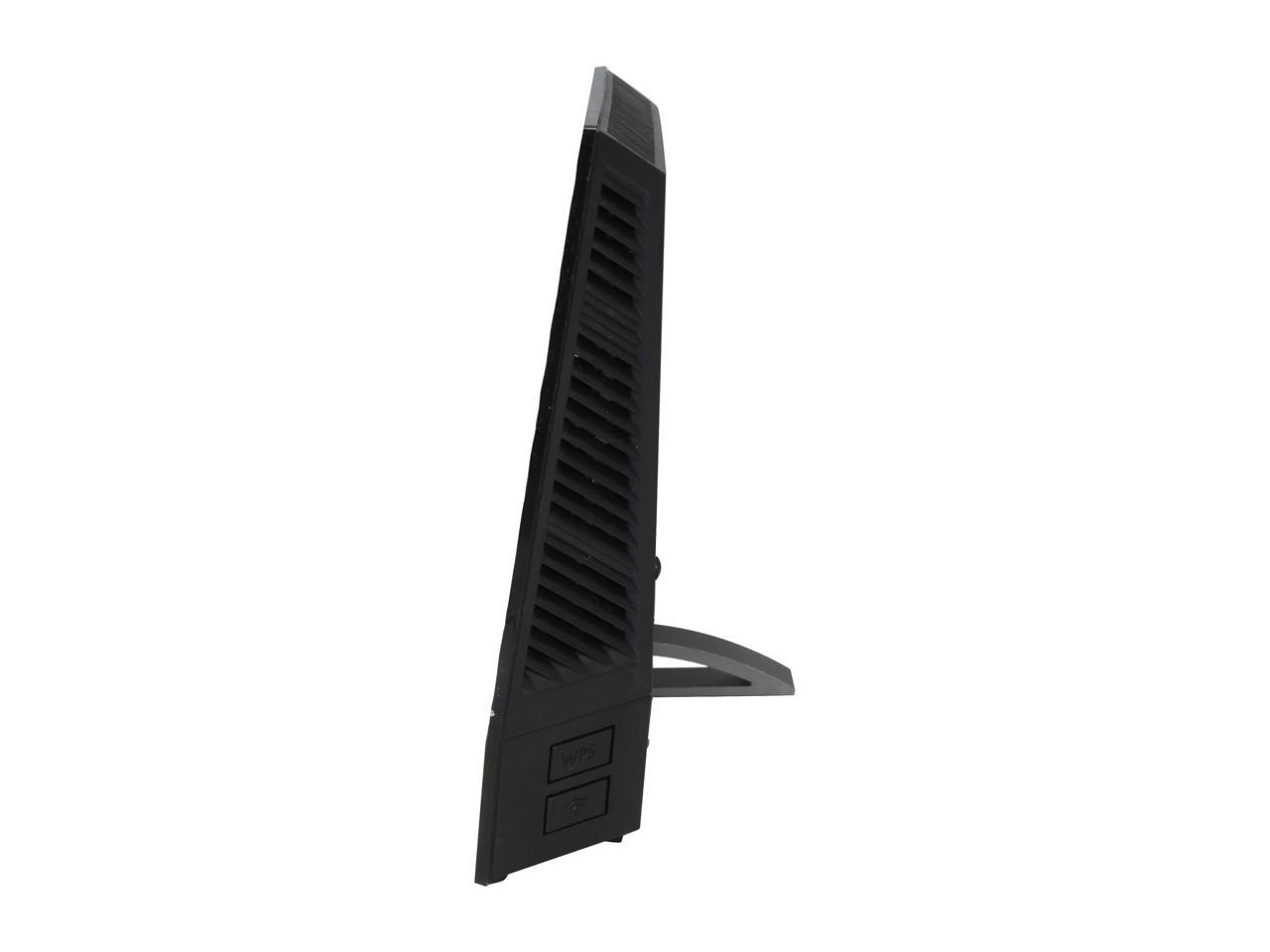 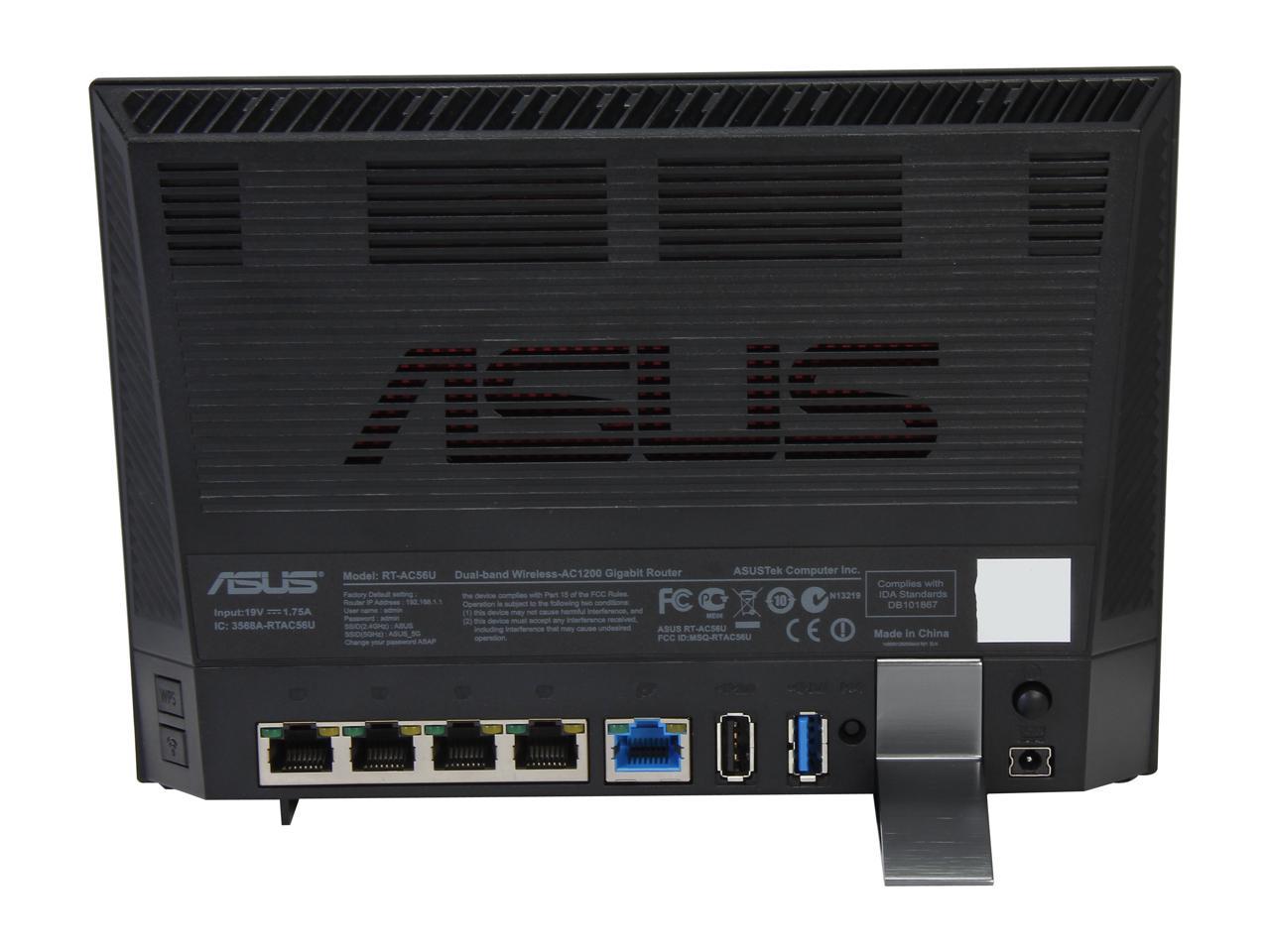 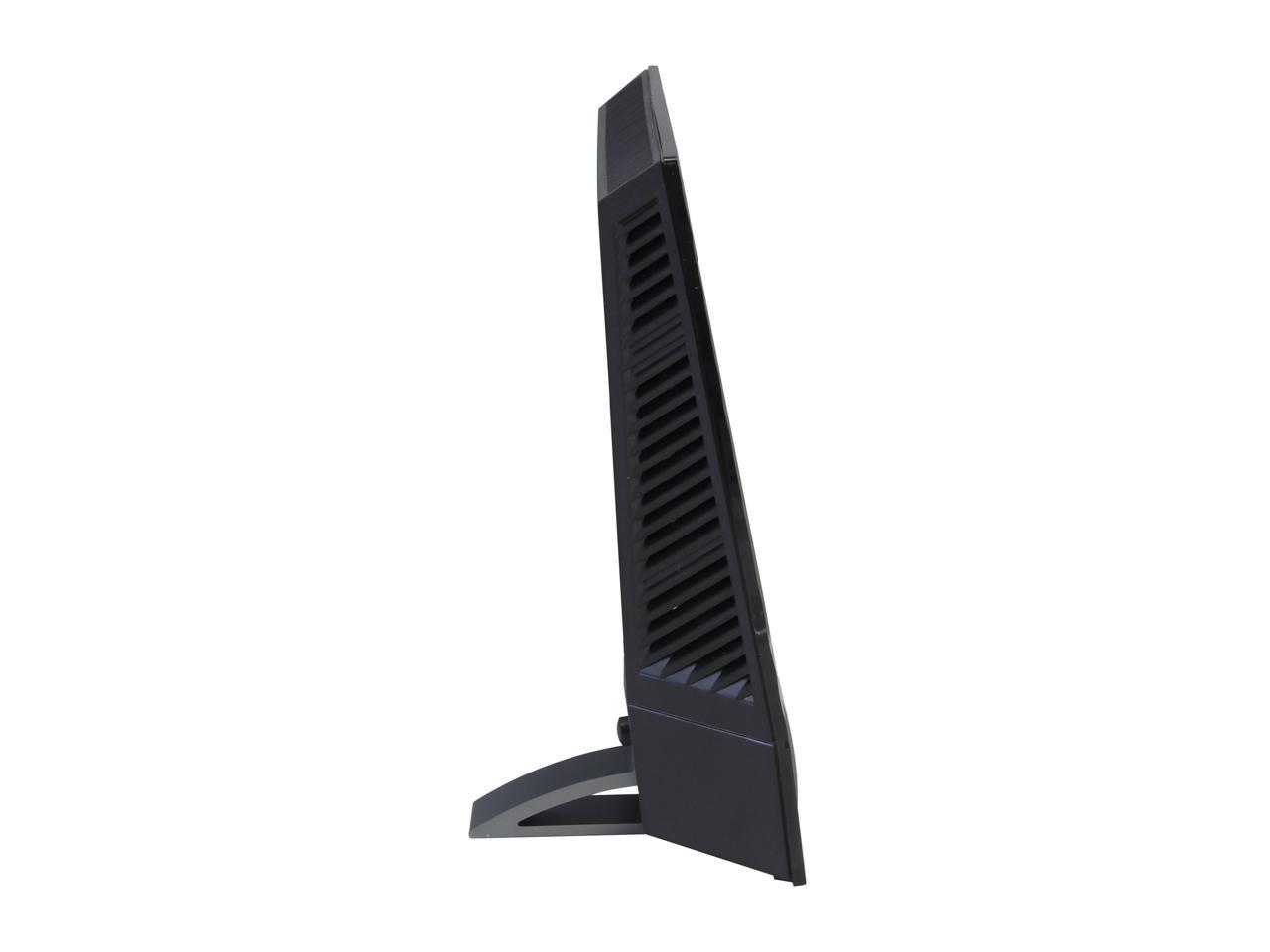 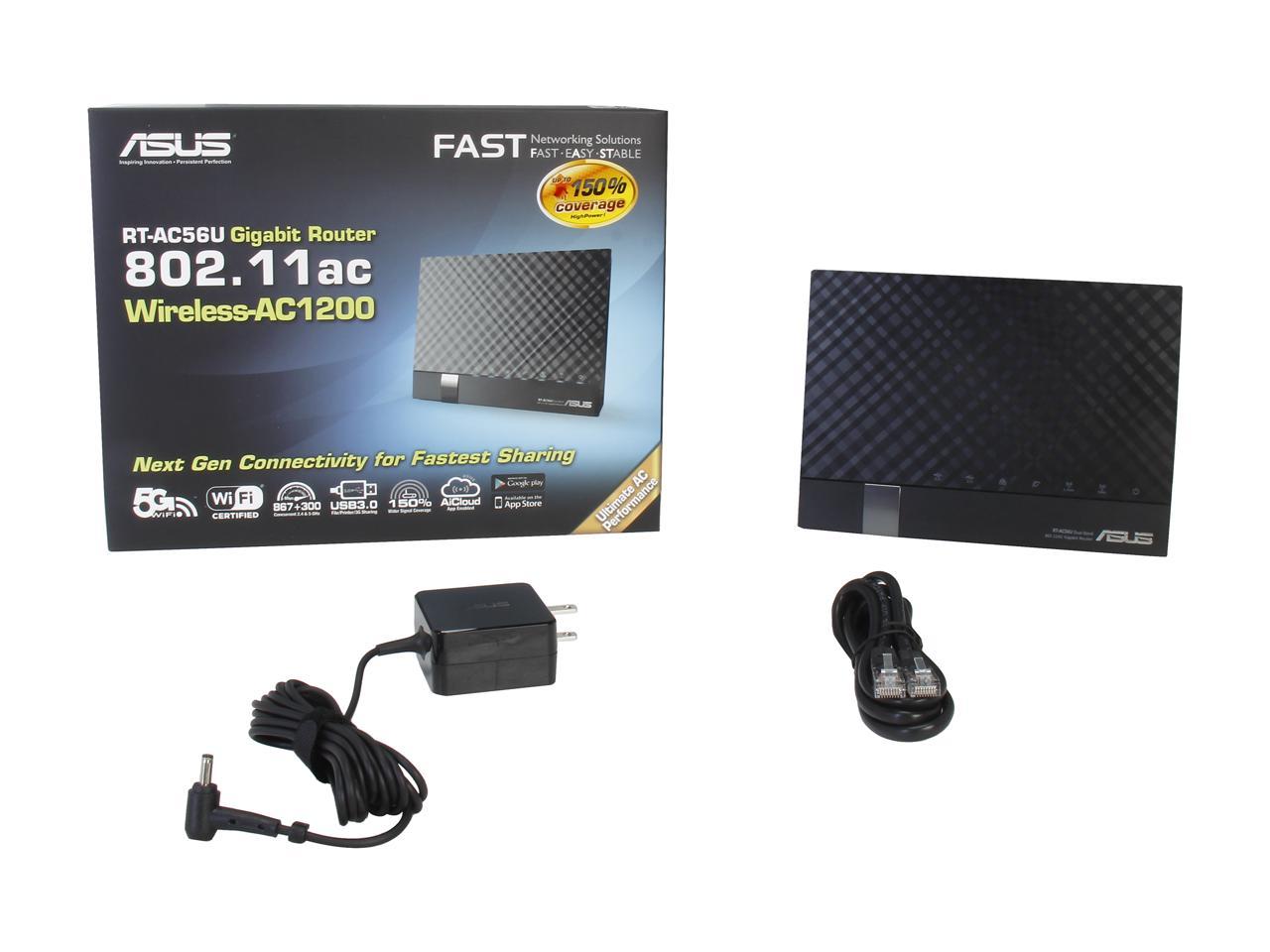 
Learn more about the ASUS RT-AC56U

Pros: I used the RT-AC68U as my main router. However, it is installed on the top level of our home, so even with its range, reliability and speed downstairs was somewhat poor. This was naturally worse with 5GHz. I decided to get this router in addition. Why? Not only have I had nothing but good expierences with Asus routers, but this, just like the RT-AC68U, allow you to install custom firmware. I installed ASUS WRT Merlin on this as well, and used a 600MBPS GBIT Powerline Ethernet adapter to feed this router downstairs. This allowed me to setup this router as an access point. Much better than simply repeating a weak WiFi signal. With this, WiFi is now completely usable throughout the house. I also now have the spare ethernet ports I wanted downstairs. Sometimes I just prefer to avoid WiFi, for obvious reasons. This router also looks very nice, you won't be tempted to hide it.

Cons: The antennas on this router are internal. I prefer external, incase I wanted to switch them out. It still works great, and I doubt you will have a problem with this router.

Overall Review: Actual 802.11AC repeaters cost twice as much as I spent on this item. (I bought it open-box). This however gives me the option to use it as a repeater, OR to use it as an access point fed via ethernet. It has a 800MHz dual core processor. It will handle whatever you throw at it. I highly recommend the Merlin firmware with it, as it maintains the slick Asus webui, adds useful features, and fixes bugs over the stock firmware. If you want the latest (802.11AC, USB 3.0, all Gigabit ports, fast processor, customizability), I'm quite convinced this router is your best option, and it won't completely break the bank. HIGHLY recommend.

Pros: All I can say is wow. I don't typically leave reviews for products, but this one needed to be reviewed. I recently switched from a Linksys e1200v1 after constant connection drops in an area with high 2.4GHz interference. I hooked this router up to a Sony Vaio Pro 13 with and Intel 7260 wireless chip via the 5GHz network and was immediately blown away at the speed and range. In the area of my apartment where I typically got a dropped connection, I now have a full connection, ping times have decreased to nearly the same as my hardwired desktop, and internet connection speeds have nearly tripled due to the increased range and power of this router. That's incredibly impressive for the 5GHz network to have a greater range than the 2.4GHz network considering all the walls this thing is penetrating to get to my living room. I didn't even have to change the default Tx power from 80mW to get that (configurable up to 200mW)! Amazing. Bottom line: If you live in an area with lots of wifi interference, this router is your new best friend. If you live in a remote area and want a pain-free wireless router, this router is your new best friend. I have not experienced a singe connection drop, VPN services are spot-on, Asus AiCloud is one nifty little tool, and of course, it supports the latest 5th generation wireless AC standard. This is the best, fastest router I have ever tested (I'm a computer engineer) and I will not hesitate to recommend this to anyone. It is worth every penny.

Cons: None as of now, but I will update if I run into any issues in the future.

Overall Review: For first time users: the default username and password is admin/admin. Don't hesitate, just do it. I did a lot of research and ultimately bought this one. You won't regret it.

Pros: - Works very well both on the 2.4 band and the 5 band. Prior to getting the router, the chief criticism that I encountered when doing my research was how unreliable and inconsistent its performance on the 2.4 Ghz band was. After a few hiccups early on, an update to the firmware completely resolved this issue. It should be noted that there was no need to use a third party firmware (as many people online had recommended). I just used the router's own firmware updating process. - Has very good signal range and connectivity. Our house is relatively old and as such internet and phone line setup is a mess. Because of that, the router had to be placed in a very inconvenient and inefficient position. However, it was pleasantly surprising how well the wireless network functioned in spite of that fact. I use a desktop computer in a room roughly 20 meters away from the router, with the signal passing through 2 walls, and I get speeds that are identical on the wireless band as to when I plug directly into the router with a hard line. - Great price. At the time I purchased the 56u, it was a bit of a gamble as there were much more reliably rated options for a bit more money. However, the higher priced units would have been more than we needed for our home network. This unit has been perfect for all of our needs at home, which includes 3 desktop computers, 3 smartphones, 2 kindels, an Ipad, and the occasional laptop. Rarely are all the devices being used at the same time, but it has been able to handle a majority of them being used simultaneously with no problems. I believe that is an exceptional value of performance for how much the unit costs. - A good selection of features and a great UI. Working with this router is a breeze, and the amount of options and features it includes is more than enough for a home unit.

Cons: The only con I can think of is that there was a need to upgrade the router's firmware before it functioned reliably (dropped connections mostly, but sometimes not recognizing devices). The router has been so stable since updating, however, that I have a hard time even considering that a true con.

Overall Review: This is really a fantastic router. I cannot recommend it highly enough to people that are looking for a fast, reliable router to use for a mid-sized home. I'll add one more anecdote, that because of the ease of working within the router's UI and the traffic monitoring features it has, I was able to prove to our provider (CenturyLink) that there were issues with the lines in our area and convinced them to fix it when they had previously been reluctant to do so. Since then we've been getting speeds sometimes greater than advertised, and no dropped connections. I waited to post a review for this router until after owning it for quite some time (about a year now) due to the reliability issues that many other people reported. It has been out of sight and out of mind since after the firmware update (about 3 months into ownership), and that is probably the best rating I could give to a router.

Pros: I was upgrading one of the higher end TP-Link routers because I was having some issues with packet buffering on the gateway. Brought it home (purchased from MC) and connected it to my laptop and ran through the setup and had it up and running and all my devices connected to it in 5 minutes. the GUI, although different than standard GUIs for consumer routers, is intuitive and feature rich. I am still running on OEM firmware and I have not run into any limitations on it yet. The network tools included on the router (QoS, Auto Channel, 2.4/5GHz bands) make this a very reliable router and I have found that my router is no longer the bottleneck. The build quality is nice, and USB 3.0 for NAS is a plus. Havn't played with the AiCloud feature much yet, but it looks promising enough. Signal is excellent (single story home) throughout my home. Have not had any dropoffs in the 3 weeks I have had the router. Highly recommend this router for anyone looking to upgrade from a low/mid-level consumer router.

Pros: ASUS came thru for me and shipped a refurbed unit and I am a happy camper. all is good now. Thanks ASUS for listening to me!

Cons: it overheats. after about a year of owning it, i kept getting dropped connections. I was able to fix it by removing the case to let it air out. that seems to have fixed things.

Overall Review: the price is right and the router works fine. I would add in a fan or something to keep the router from overheating and dropping the wireless connection.

Cons: Plagued with intermittent performance problems – router will work correctly, but after a certain (unknown) amount of data passes through it, everything slows to a crawl.

Overall Review: Owning this router for the past eight months has been an exercise in frustration and disappointment. I’ve worked with Support (which was an average experience), reset & restored the router multiple times, and have been through five or six firmware revisions. I have to reboot this router a couple times a week. The 12 year-old Linksys WRT54G it replaced was rebooted MAYBE once a year. By the time I gave up on this router, it was essentially emulating the WRT54G (in that all advanced features were disabled and it was running 2.4GHz b/g in Legacy mode). Other ASUS models seem to be better, but the RT-AC56U is a dud. There seem to be low-level hardware problems which cannot be resolved by firmware updates. Believe the negative reviews you read here and at other large Internet retailers. The Wirecutter has since rescinded their recommendation on this unit I guess I’ll RMA the unit, but I’m not sure I really want another RT-AC56U in return.

Pros: Speed is very fast when it is working, LAN seems to work fine.

Cons: Wifi disconnects regularly (at both 5g and 2.4g), updating firmware and hard resets do not fix it. Only support solution offered it is to RMA it back to ASUS, which means I have to pay money to ship it. Do not buy this unit.

Overall Review: Unimpressed with ASUS as a whole. payed a premium for a router and got something that works less well than my $20 trendnet.