Feel 100% satisfied with your purchase -- with no restocking fees & no return shipping costs* within 30 days of delivery. Learn More
Price Alert
Add To Wish ListFound on 27 wish lists 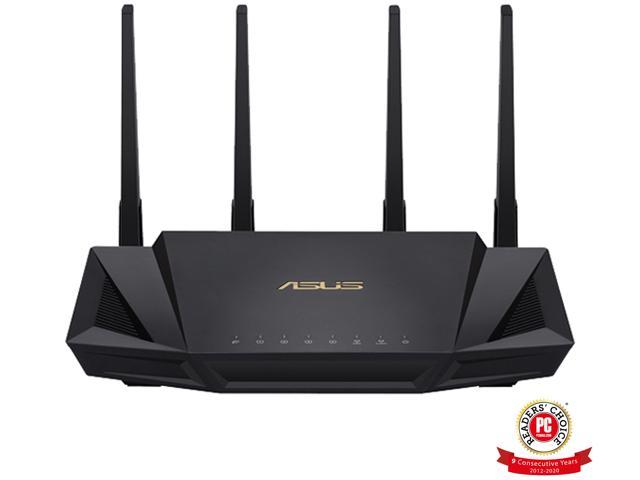 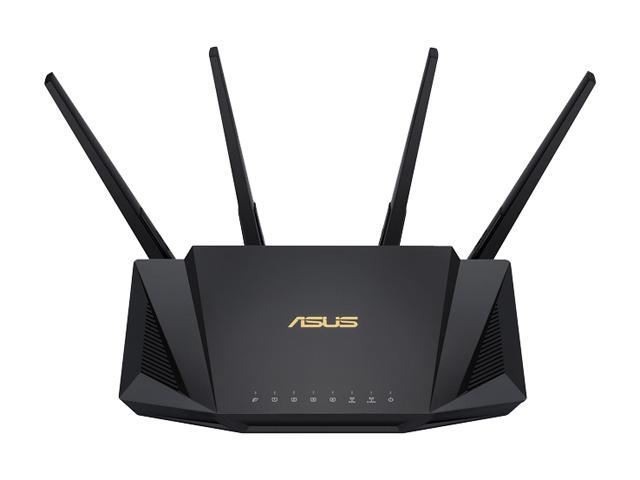 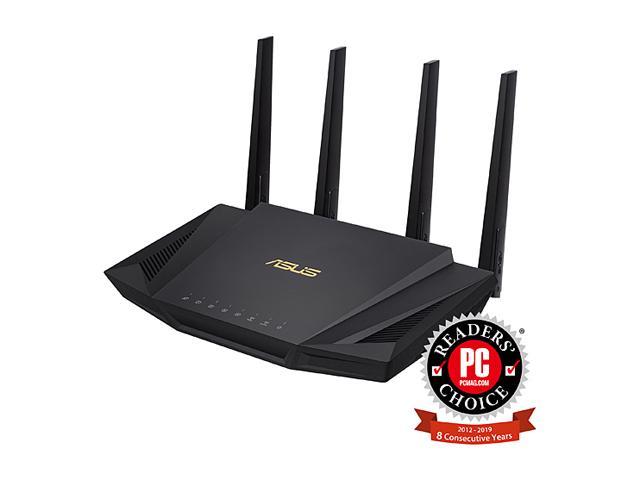 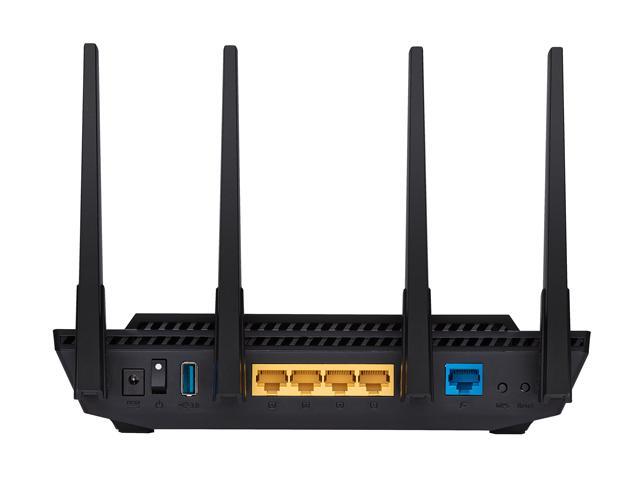 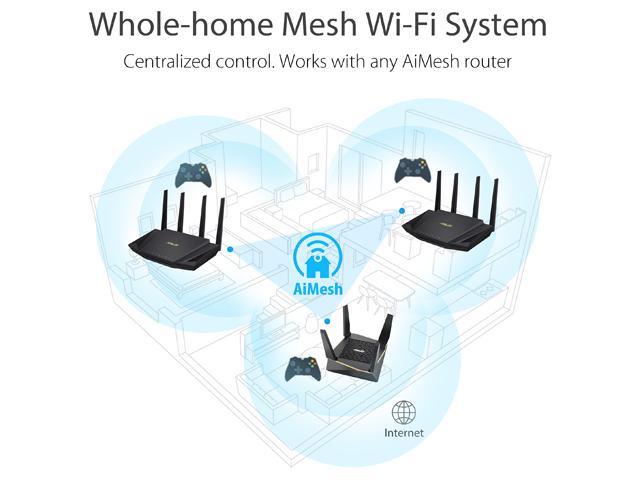 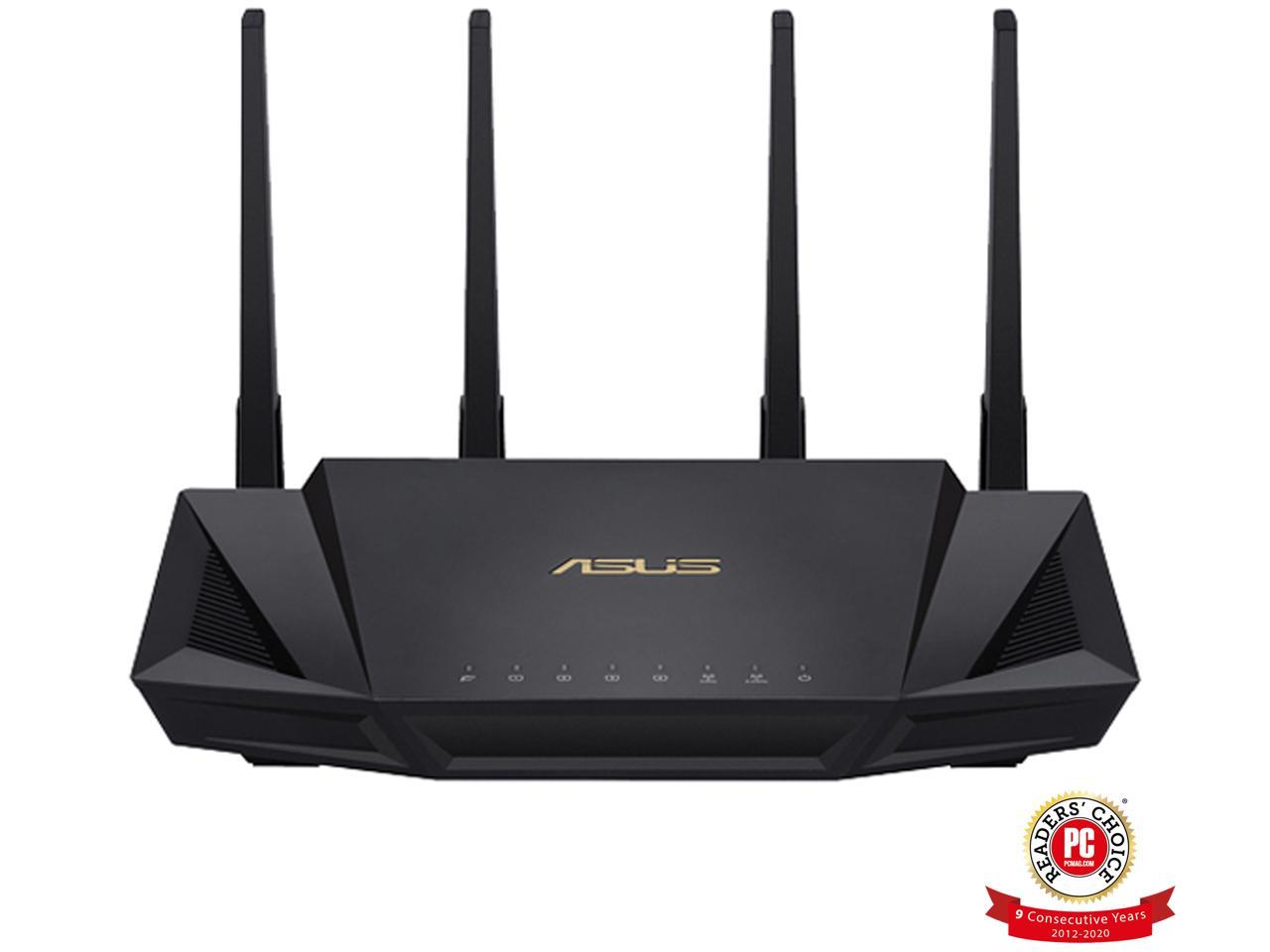 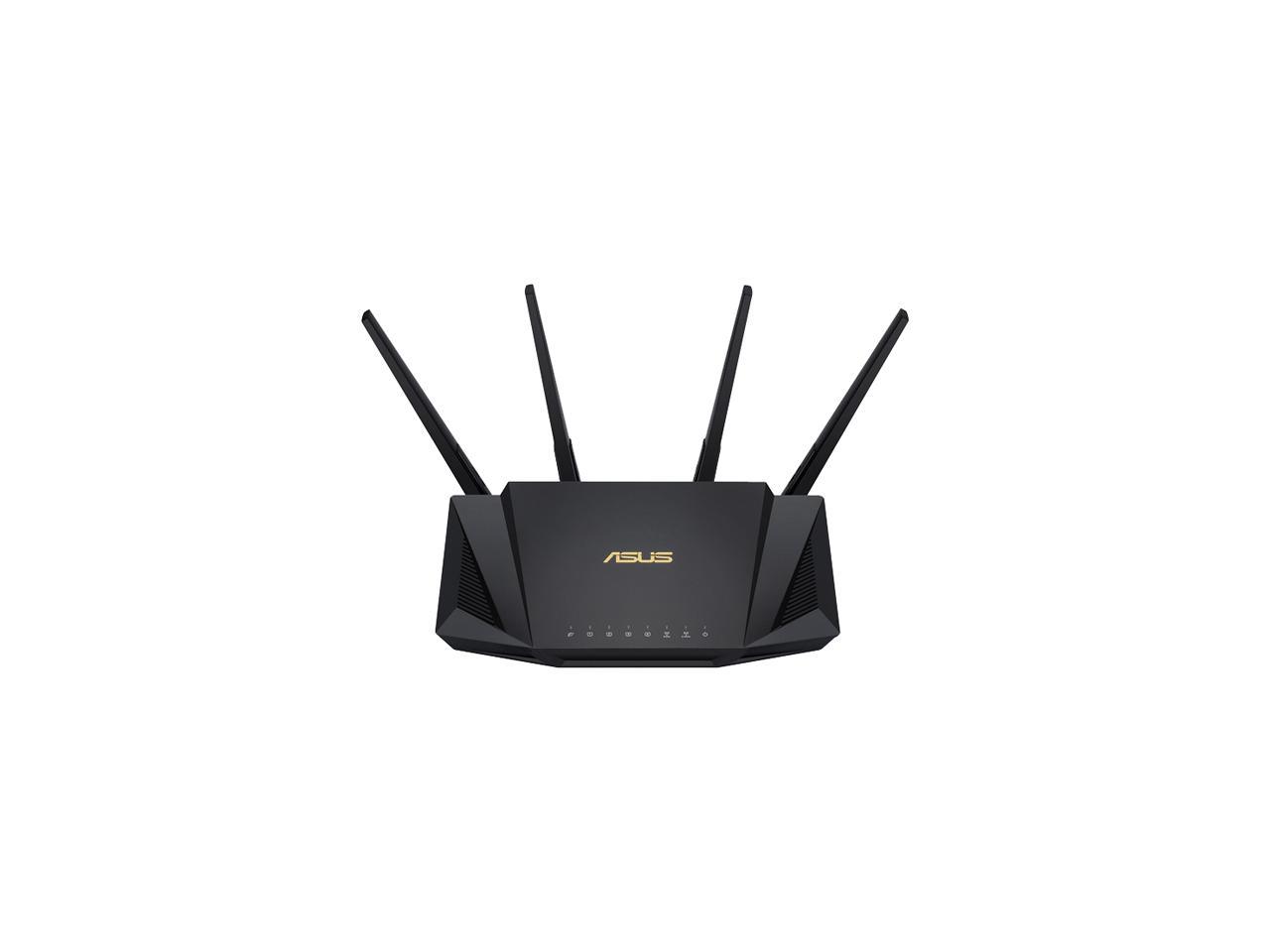 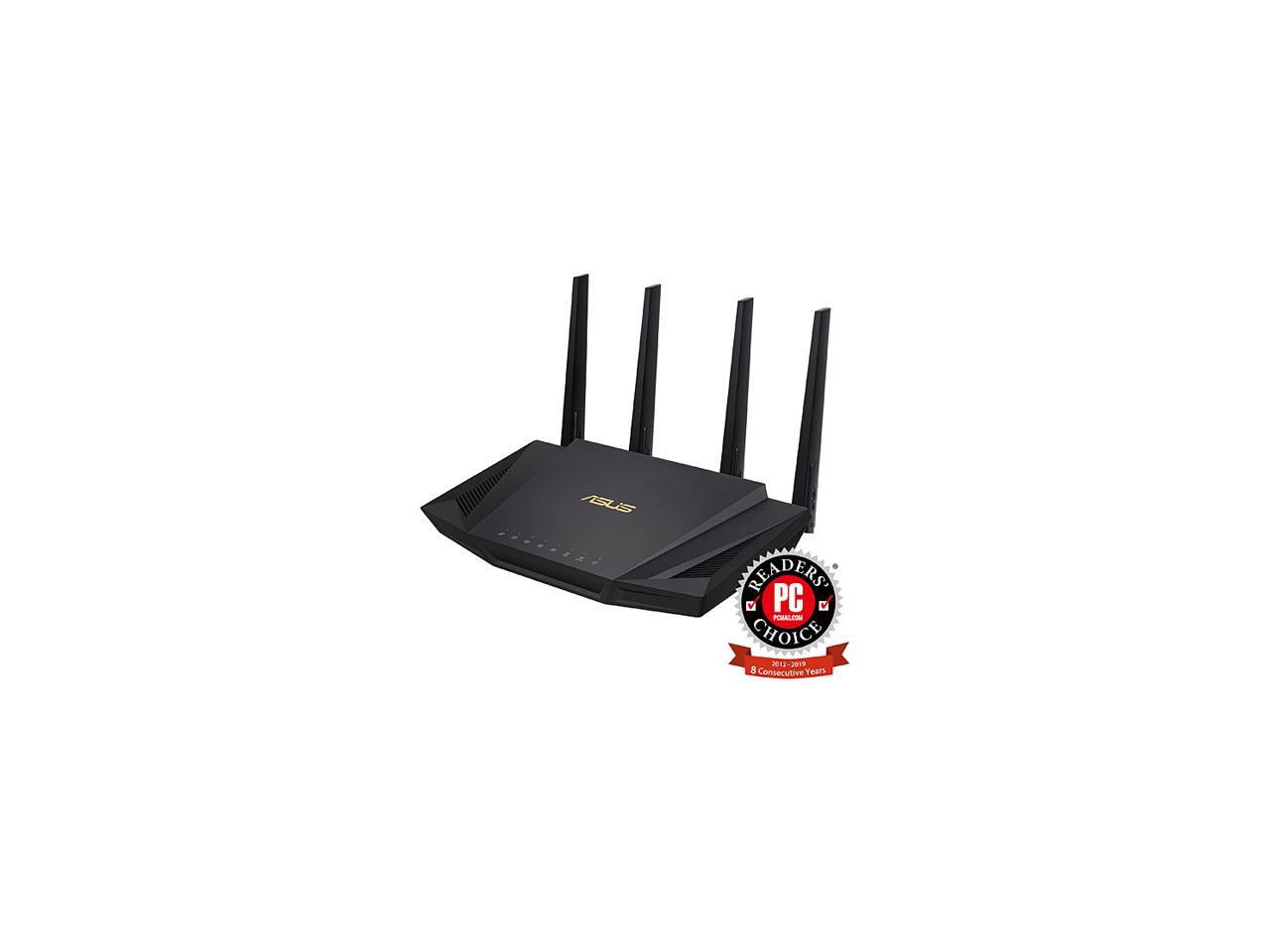 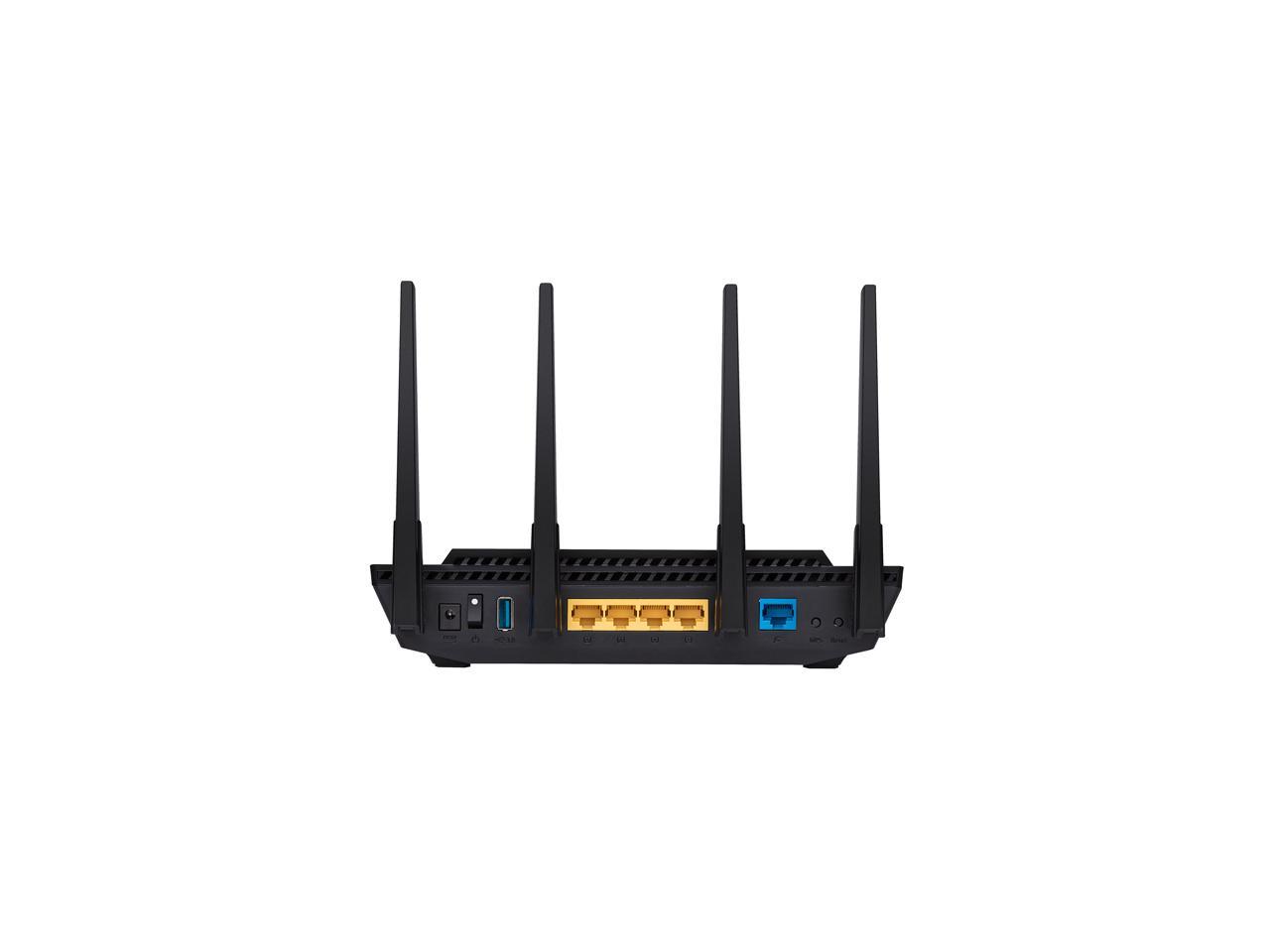 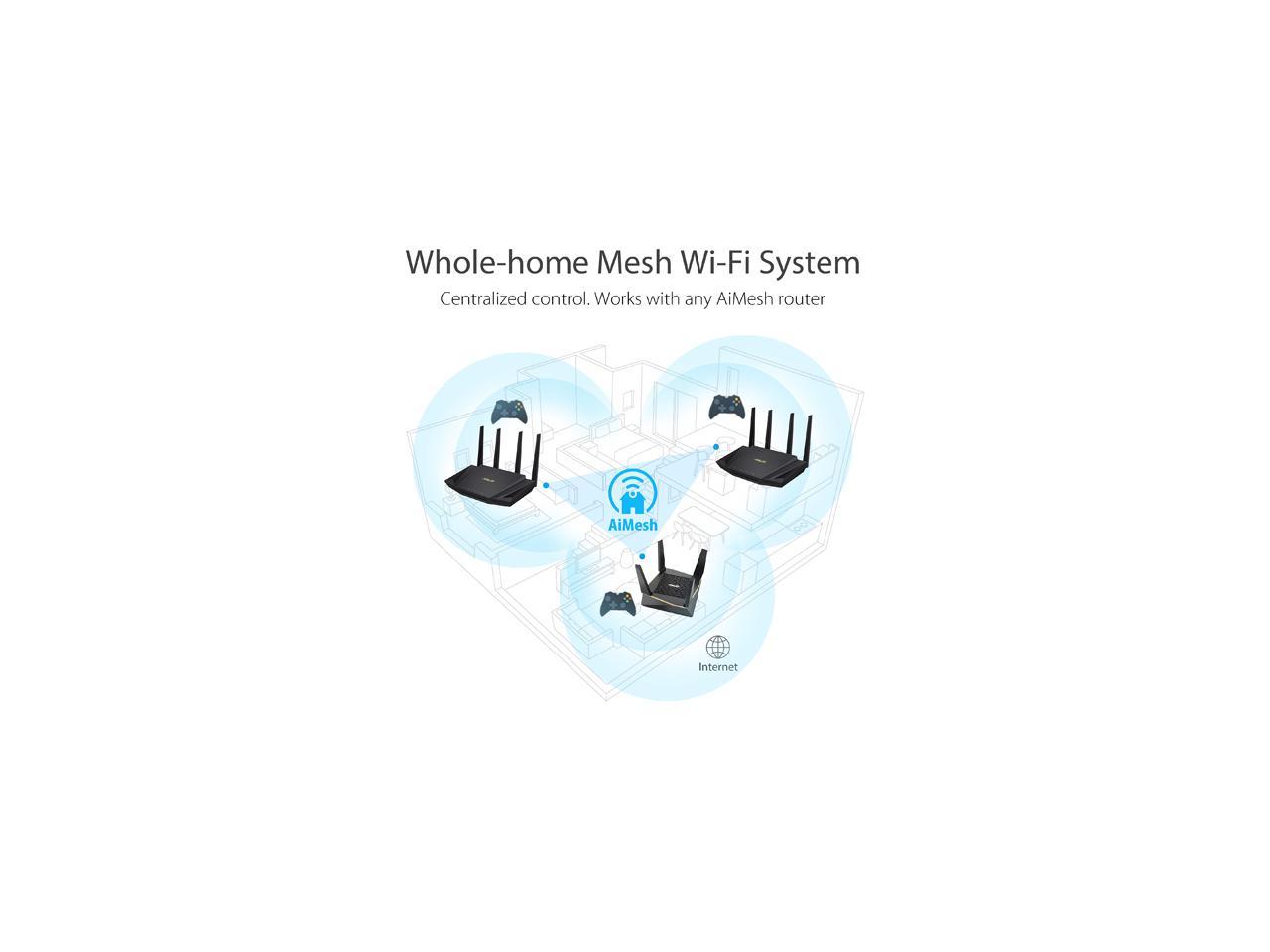 Learn more about the ASUS RT-AX3000

Overall Review: Bought this to replace my AC1900 which was running out of NVRAM due to my custom configs and ended up needing rebooted every week or so. I have had this router for 6 months and have had to reboot it twice, it has been very soiid, I could not be happier with my purchase. Router has ASUS Merlin firmware installed. I put a good bit more stress on my routers then the average person with VPN server, static dhcp leases, and other custom scripts/ configs in JFFS folder, and have about 25 wired devices and 15-20 wifi devices connected (not including any guest devices). Also bought an AX200 wifi card for laptop and can get real world speeds faster than 1 gbps on file transfers. WiFi range has increased about 20% as well. My 5Ghz AC devices see almost no drop in performance at the farther corners of the house (while before the 2.4 band would be faster in the far corners due to signal drop off). I can not speak to AI Mesh performance/functionality. If you can centrally locate your router then this model will support a 2100-2400 sqft home with ease.

Pros: - affordable latest ultra-fast WiFi 6 router with more than enough specs for a typical home wireless network. - More options for configurations compared to other similar mid-range WiFi 6 routers. - Adequate WiFi signal strength for a small-size home/condo/apartment. - Able to handle multiple WiFi 6 capable devices at once. - Can also configure the router via a cell phone app. - Can set up an extended range WiFi network through an AiMesh with other Asus routers.

Cons: - Maximum WiFi 6 bandwidth (5GHz channel) is lower than the higher-spec‘d Asus RT-AX88U, though the bandwidth is more than enough for a typical home network. - No LAN aggregation

Overall Review: Recommend for anyone wanting to set up a home network with the latest WiFi 6 wireless network standard. The specs of this router is more than enough. If wanting more gaming oriented features, might want to consider the more expensive AX11000 router.

Pros: - Faster computing speed over the standard ISP modem. - Doesn't go slow down or hiccup when a dozen devices are connected to it at the same time. - Uses latest WiFi 6 protocol. Longer term investment. - Sets up automatically with your ISP. - Great signal strength upgrade if you're using your ISP's standard modem/router. - Compact size also, it's smaller than my ancient Linksys G-router from the 2000's.

Cons: - The ONLY thing I think would be good is if it had maybe a couple more rear ethernet ports like 6 instead of 4 (nitpicking). I use of the 4: 1) 4K Vizio Smart TV 2) Bose Soundtouch 300 3) Personal Desktop Computer 4) Personal Server (Synology) If I decide to have a 2nd PC I'll have trouble not being able to have it hard wired to it. I think it's fairly common to have multiple PCs in an office connected to a single router like a switch. I could remedy this by moving the server to the room with the modem using one of its ethernet ports, but it won't be as hidden from plain sight as in the office and the power cable isn't long enough.

Overall Review: I admit, this was quite easy to setup although you need to make sure you have 2 ethernet cables, one for the modem and router (WAN port) and the other for one of the 4 LAN ports in the rear of the router to the PC. It will configure itself once you enter the standard IP address in your browser and all you have to do it input the name of the 2.4 GHz and 5.0 GHz bandwidths (decided to separate them) and passwords. I bought this primarily to use as an access point more centered in my house apart from having a much broader signal range throughout the house and of course better delegating of signal because the modem/router given to me by my ISP was making it difficult to get a strong signal and was slow in doing internet tasks. It's processor seemed to be overwhelmed easily by having 7-8 devices connected to it, luckily with this new router doing all the work, it made getting to webpages faster and casting to my Chromecast or Apple TV devices much faster when it used to lag or flat out not do what I asked it to. I also bought this primarily to have invested in long term device because of the new WiFi 6 protocol that's new to keep around. I bought some CAT 8 cables also which was also an investment in order to get the maximum speed while not risking loss of signal to the router from the modem and even to my personal computer. I recommend it personally, my father now has signal on the other side of the house when before it never reached.

Cons: Can’t get the USB port on AiMesh NODE to operate.....yet. Might have to dive under the hood.

Overall Review: I would recommend these units. I bought two, to upgrade my existing RT-AC68U/P units. I changed the overall network from Router->Extender to AiMesh Router->3 AiMesh Nodes network by repurposing the older devices. Works as anticipated. As a bonus, they’re all supported by Merlin. Happy camper so far.

Pros: If I change the WiFi setting a little bit more, I think I'll get a faster speed.

Pros: Easy set up. Using my AC5300, I was able to set up AI Mesh using the app. AI mesh uses 1 of the routers like a range extender. Yes I know that is over simplified, but the best I can do. I now have seemless coverage throughout the house, the previous dead zones are gone. I have not had any connection problems at all.

Pros: Took all of 2 minutes to setup. 30-50% faster than 802.11ac. Nice compact size. Asus Router app for Android has every feature you'll need. AiMesh software is a plus.

Overall Review: Purchasing this has allowed me to move my pc with a wireless adapter (802.11ax) to the other end of my home without having to run cat cable. Just as fast as directly connected to router.

Pros: Uses newest generation of wifi Haven't had any connection issues others have mentioned.... Yet. Upgraded from a RT-AC1900P, which has served me well for years. Compared, the RT-AX3000 has: - better signal strength overall - WAY better 5GHz strength (can get a strong, stable 5 GHz signal through 3 floors vs. a weak signal with the 1900P) - wireless seems a bit snappier. Likely due to the AX3000's better CPU and memory. - offers the ability to easily flash an alternative firmware on set-up.

Cons: cons that are no big deal: - no stand to set router upright. - included ethernet cable is cat5e - ASUS partnered with Trend Micro with these routers. There are some features you can not use without agreeing to share your information with Trend Micro. This appears questionable and intrusive sometimes not making much sense (you have to accept the agreement to use QoS for example). But I don't think this is a big deal based on what the data collection disclosure says and what I've read elsewhere. This does indeed seem to be for security reasons and not a Facebook like 'collect all the personal data they can to sell' agreement. potential con: - AC power plug. ASUS (like other wireless router manufacturers) has used plague capacitors in their power plugs in the past. FYI, if you have a router that works well and suddenly starts dropping connection, signal degradation, randomly resetting, or routinely malfunctions in general, there's a very high chance the power plug had a capacitor inside it go bad. Problem is I won't know if that's the case for 1-2 years. I've experienced this issue with an older ASUS router I used to use; replacing the AC plug fixed it. con that IS a big deal: - ASUSWRT-Merlin, the main reason I bought this thing

Overall Review: I bought this over the past summer since it kept going on sale. I've been using an RT-AC1900P for years. That wireless router worked very well for me. I only set up the AX3000 a few days ago and I wasn't expecting it to impress me, but it has. I would give the AX3000 5 eggs if it weren't for 1 thing: if you're the ASUS customer rep reading this review, this is what you need to know. For me, the main selling point for this product was the fact its set up to allow the owner to flash another firmware right out of the box. There's some weirdo out there who makes firmware specifically for ASUS wireless routers. Its called ASUSWRT-MERLIN. The last time this firmware was updated was back in August and the project has since been on hiatus. The only detail I know about it is ASUS suddenly stopped sharing source code the project needs to continue. I'm not sure if this is limited to ASUS or if its industry wide, but this is a shame since I like using ASUSWRT-MERLIN and, as I understand it, ASUSWRT-MERLIN provided features and bugfixes that ASUS used in their own official firmware updates. I will change this review (if I can) and bump it up to 5 eggs once the ASUSWRT-MERLIN project resumes. And, yes, this is a big deal to me when it comes to buying ASUS routers.

2 out of 2 people found this review helpful. Did you?
Manufacturer Response:
Dear Thomas K, We certainly value your feedback on this matter, and I will be letting the related department know about the issues you are experiencing for continuous improvements to the product line. If you need any assistance, You can reach us via ASUSWRT(ASUS router Web UI), or ASUS Router App, or you can send me at cl-adrian@asus.com. Your case for reference is N2111035470-0002. Your case for reference is N2111035470-0002. Thank you for choosing ASUS! Best Regards, Adrian ASUS Customer Loyalty – US Support