Feel 100% satisfied with your purchase -- with no restocking fees & no return shipping costs* within 30 days of delivery. Learn More
This item is currently out of stock and it may or may not be restocked.
Out of Stock
Add To ListFound on 18 wish lists 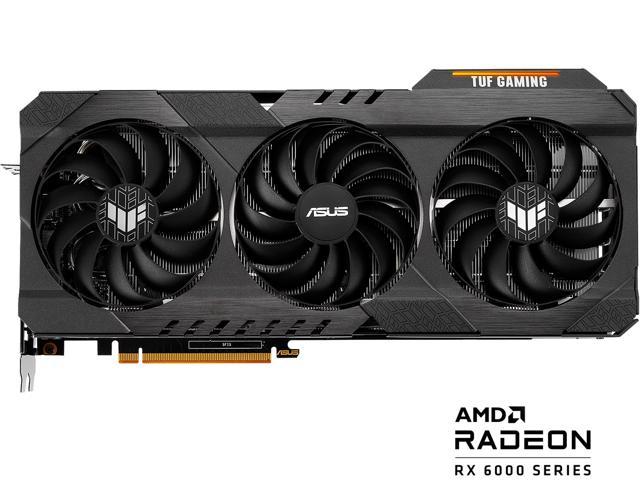 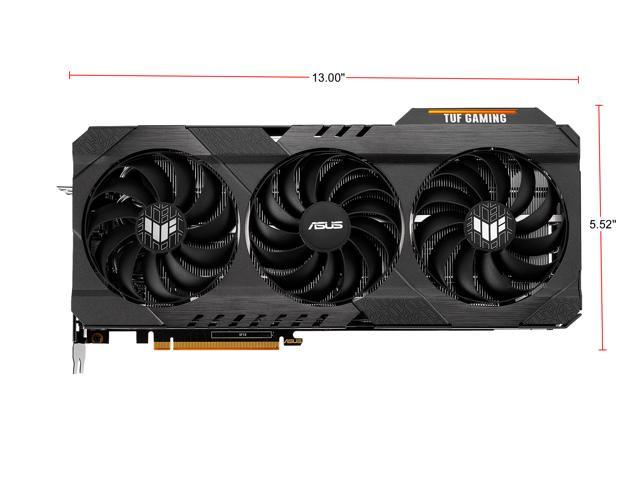 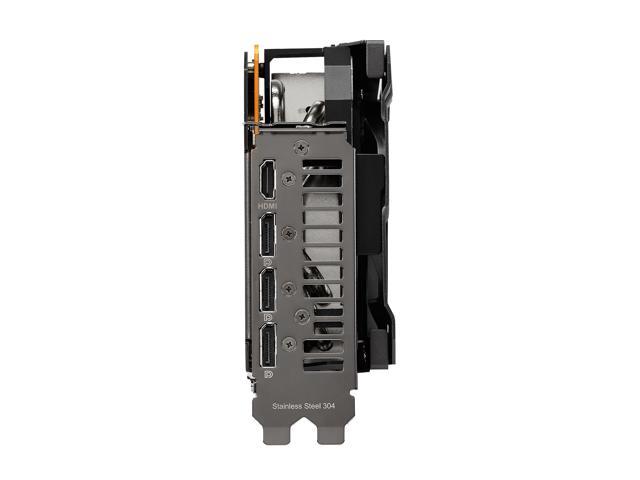 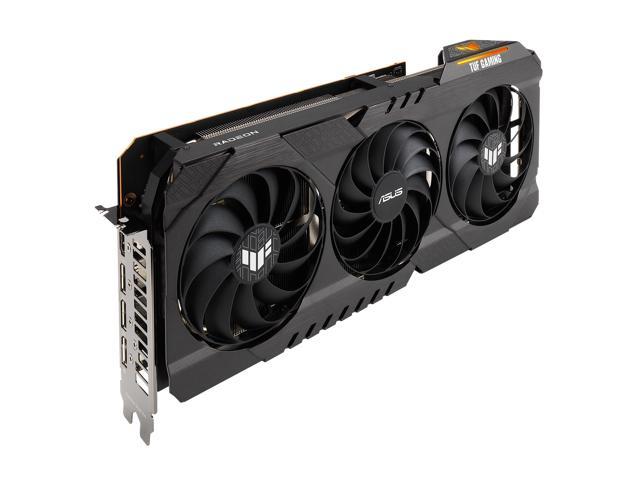 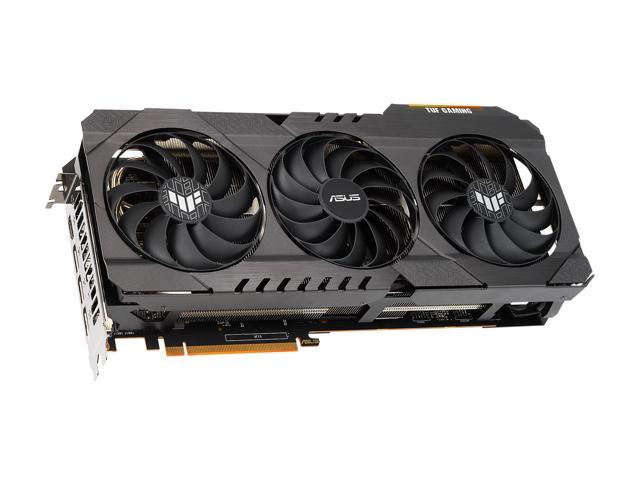 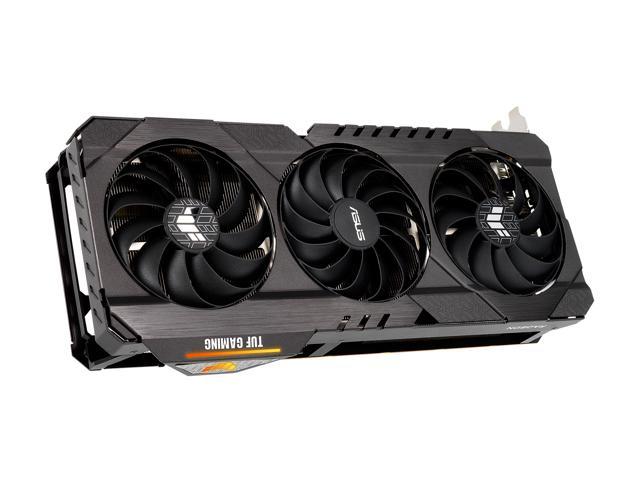 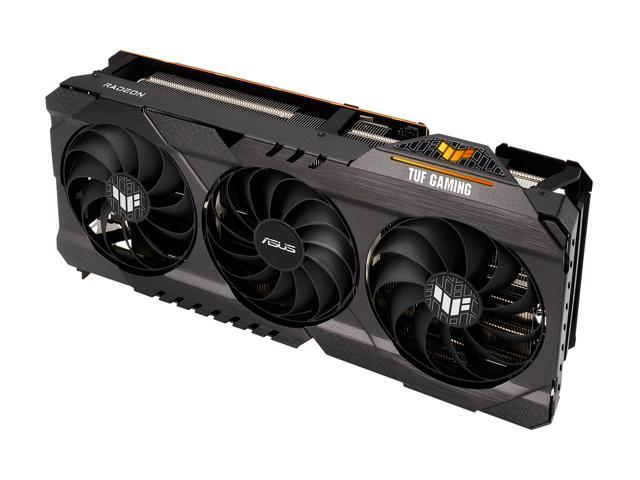 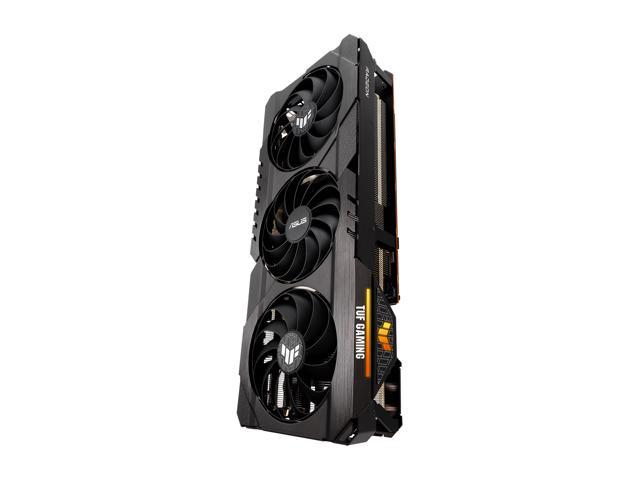 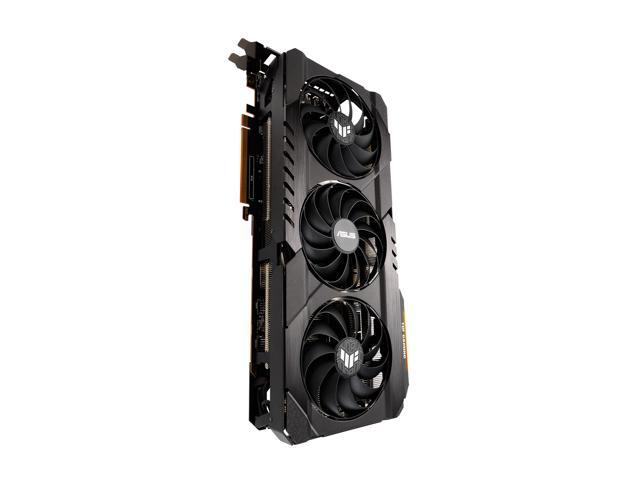 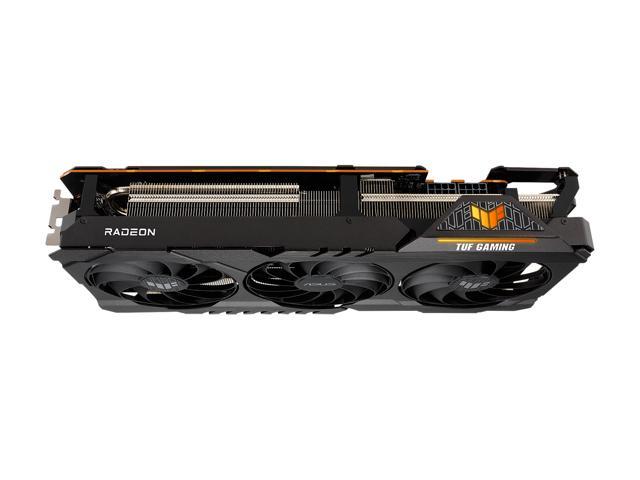 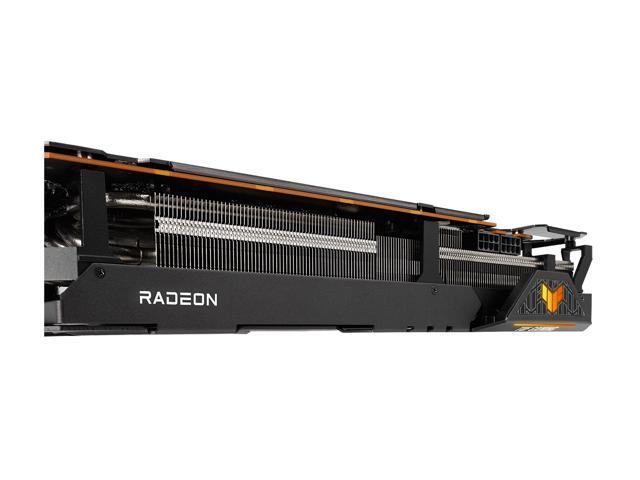 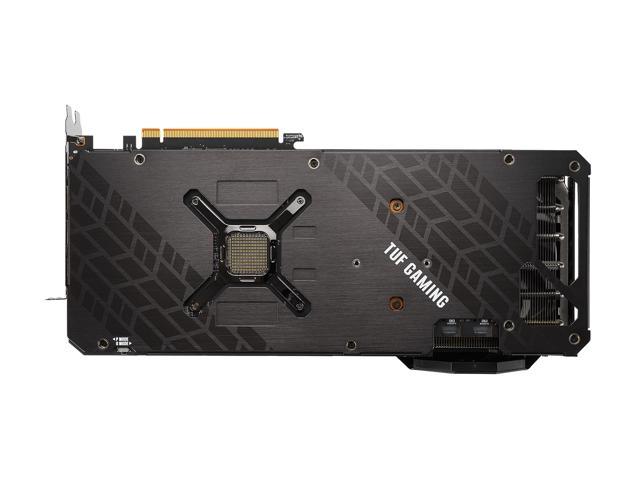 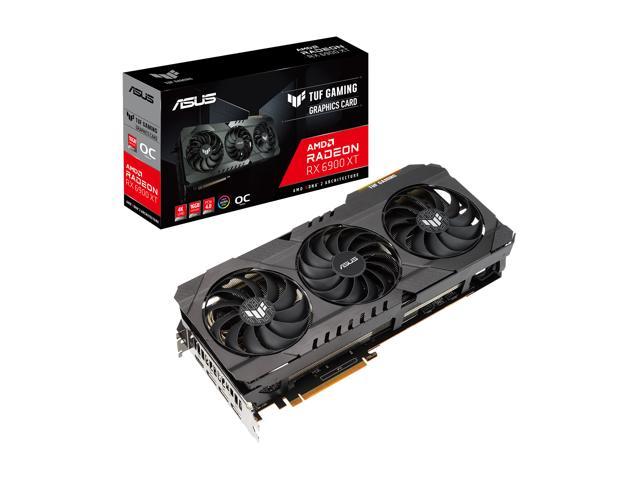 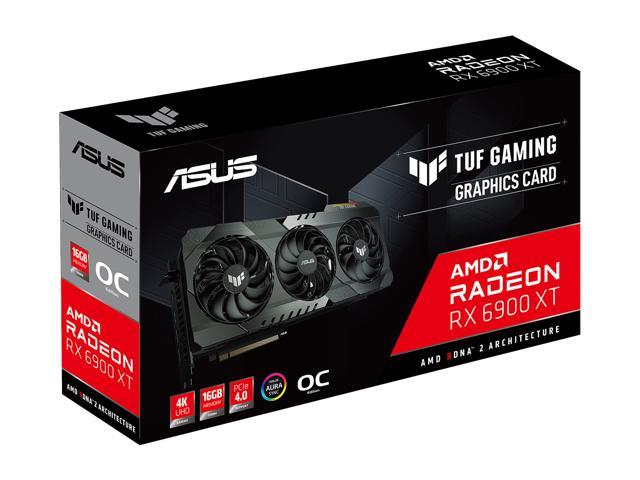 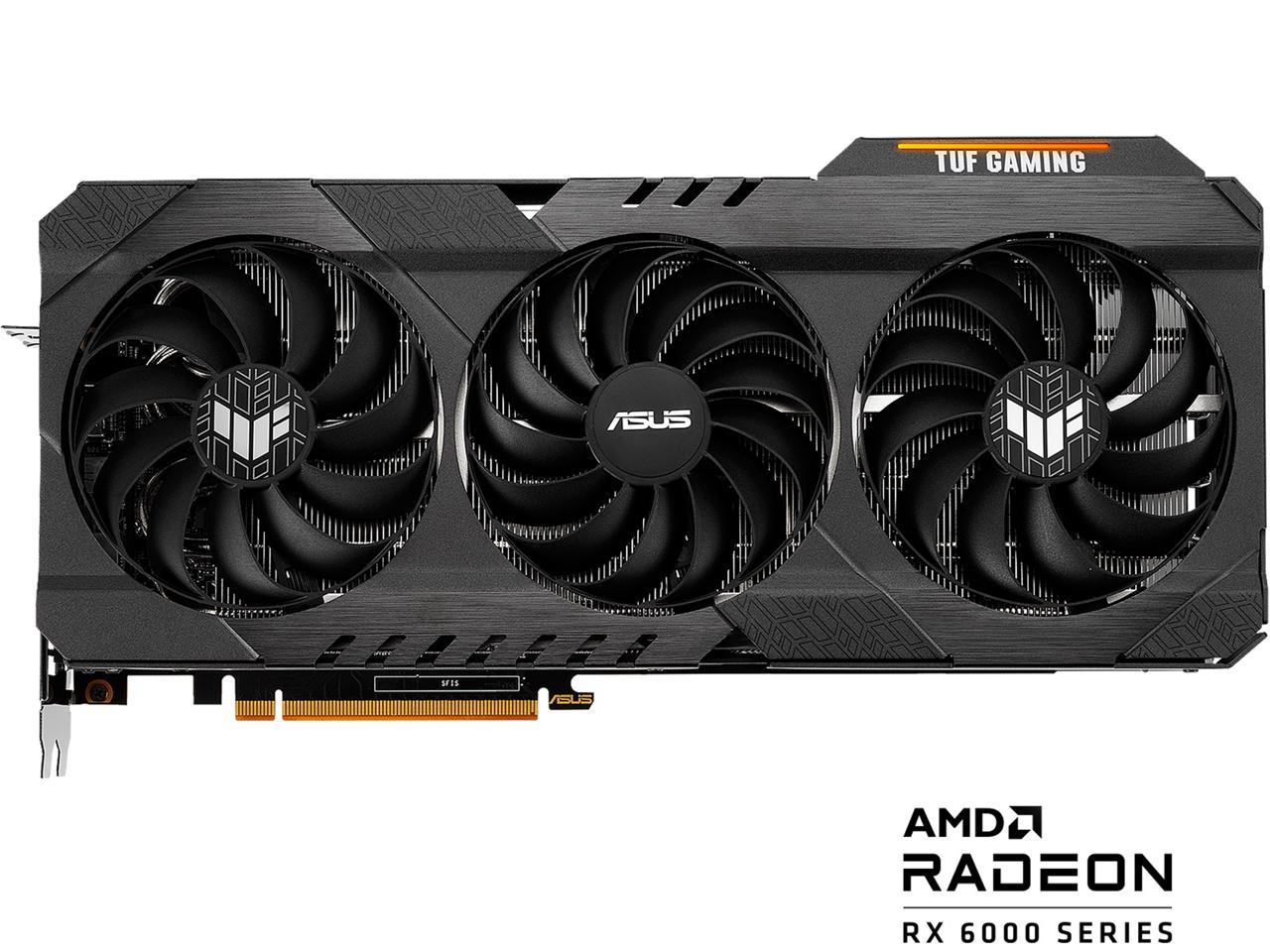 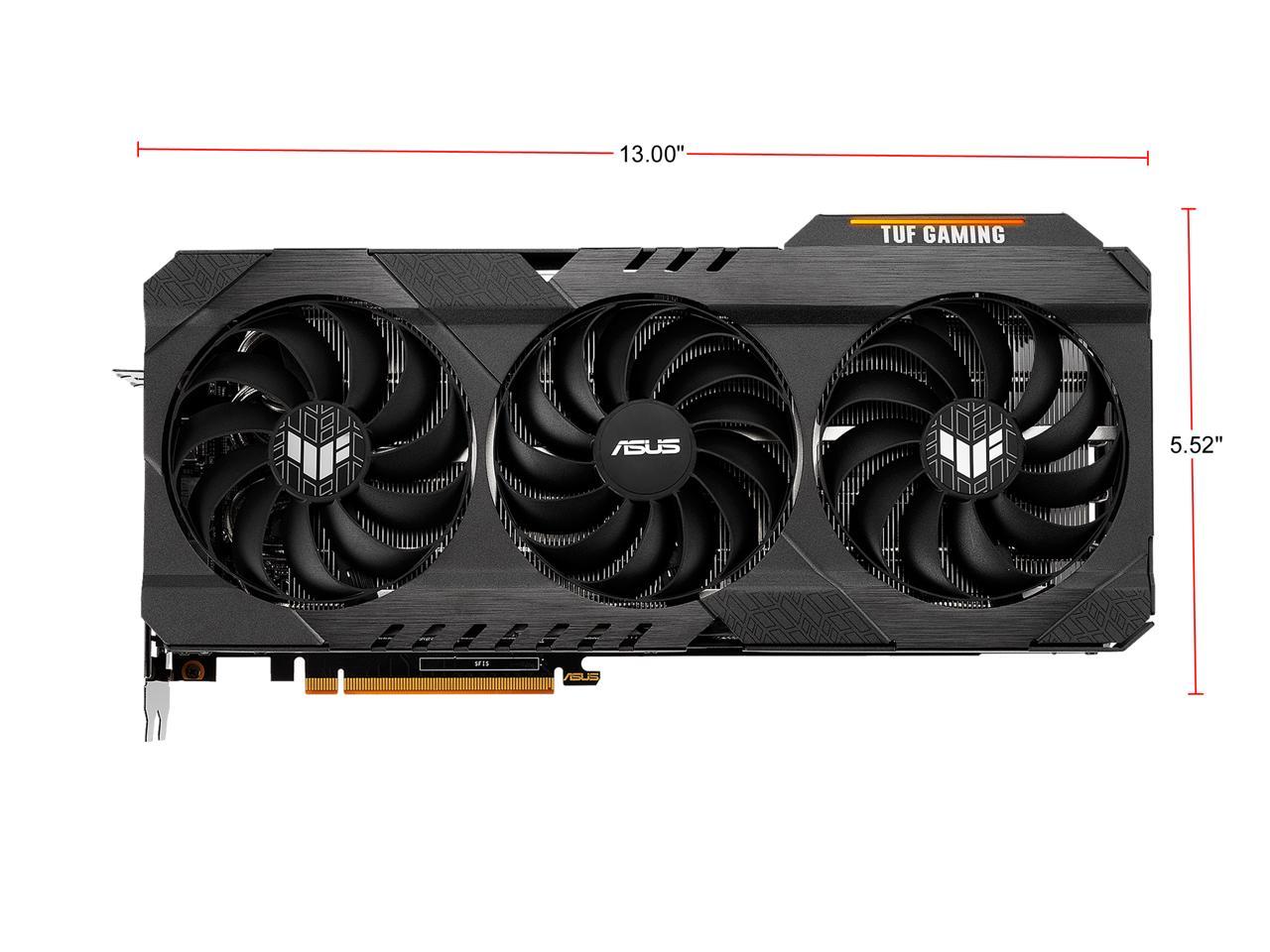 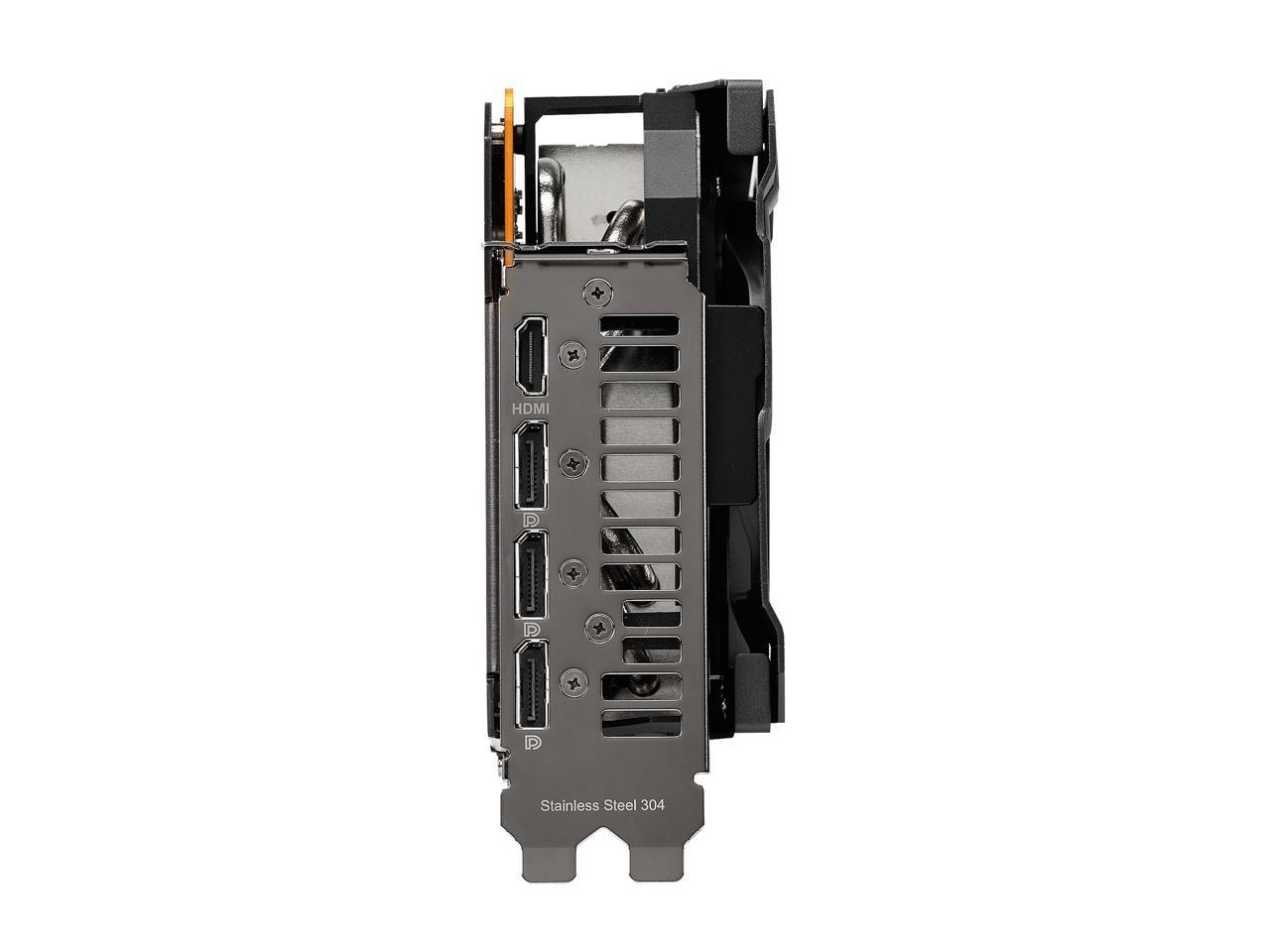 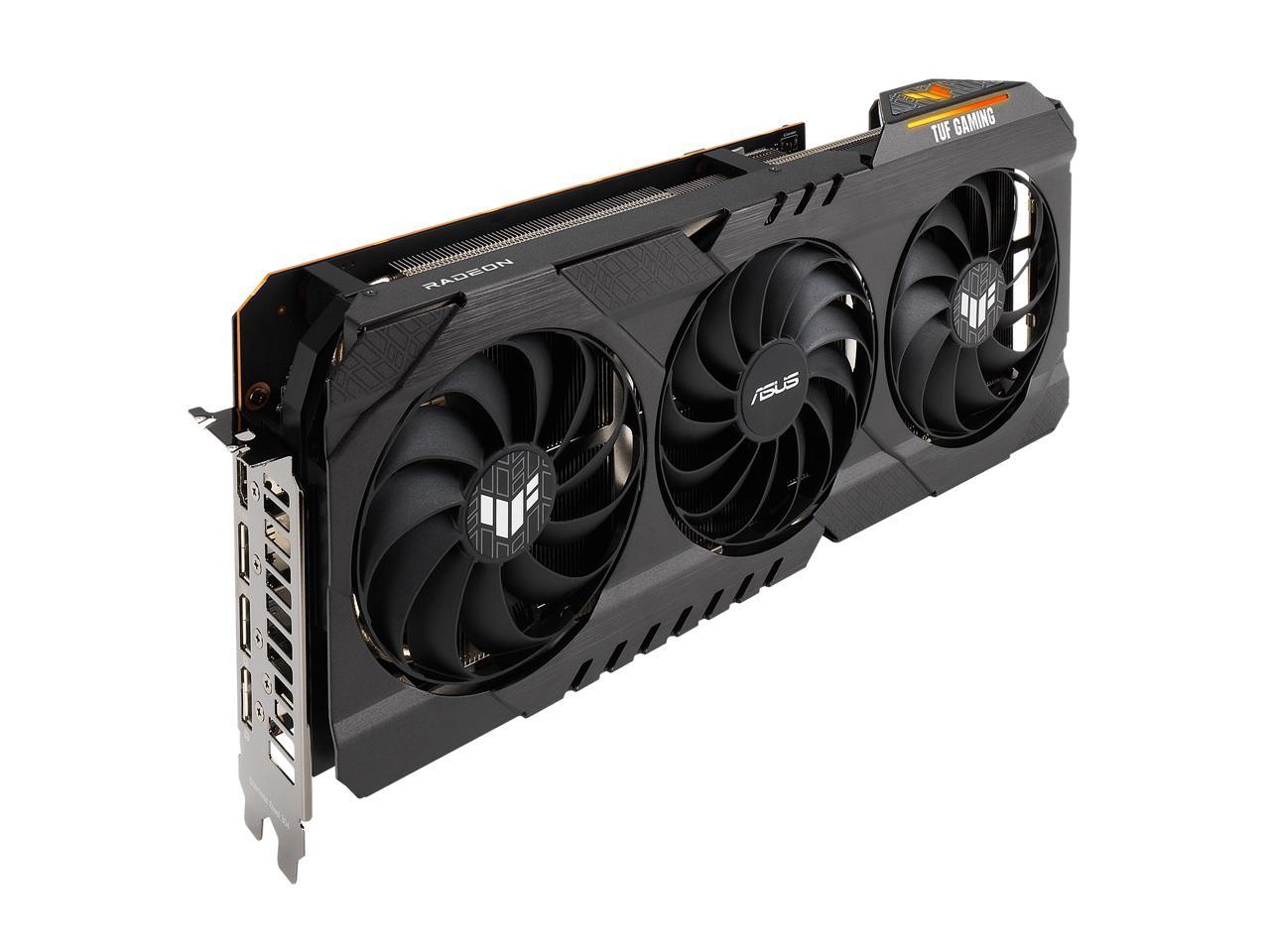 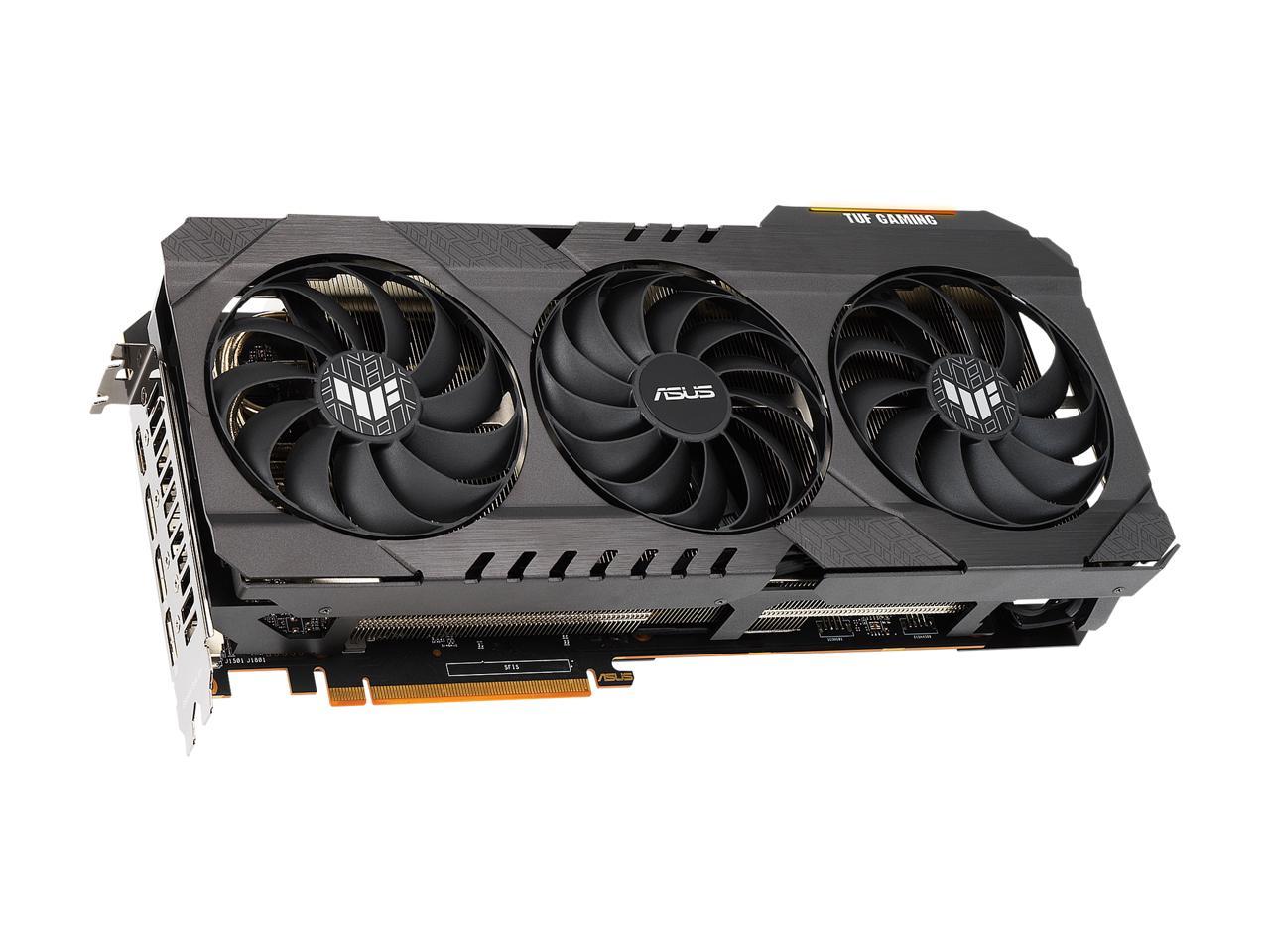 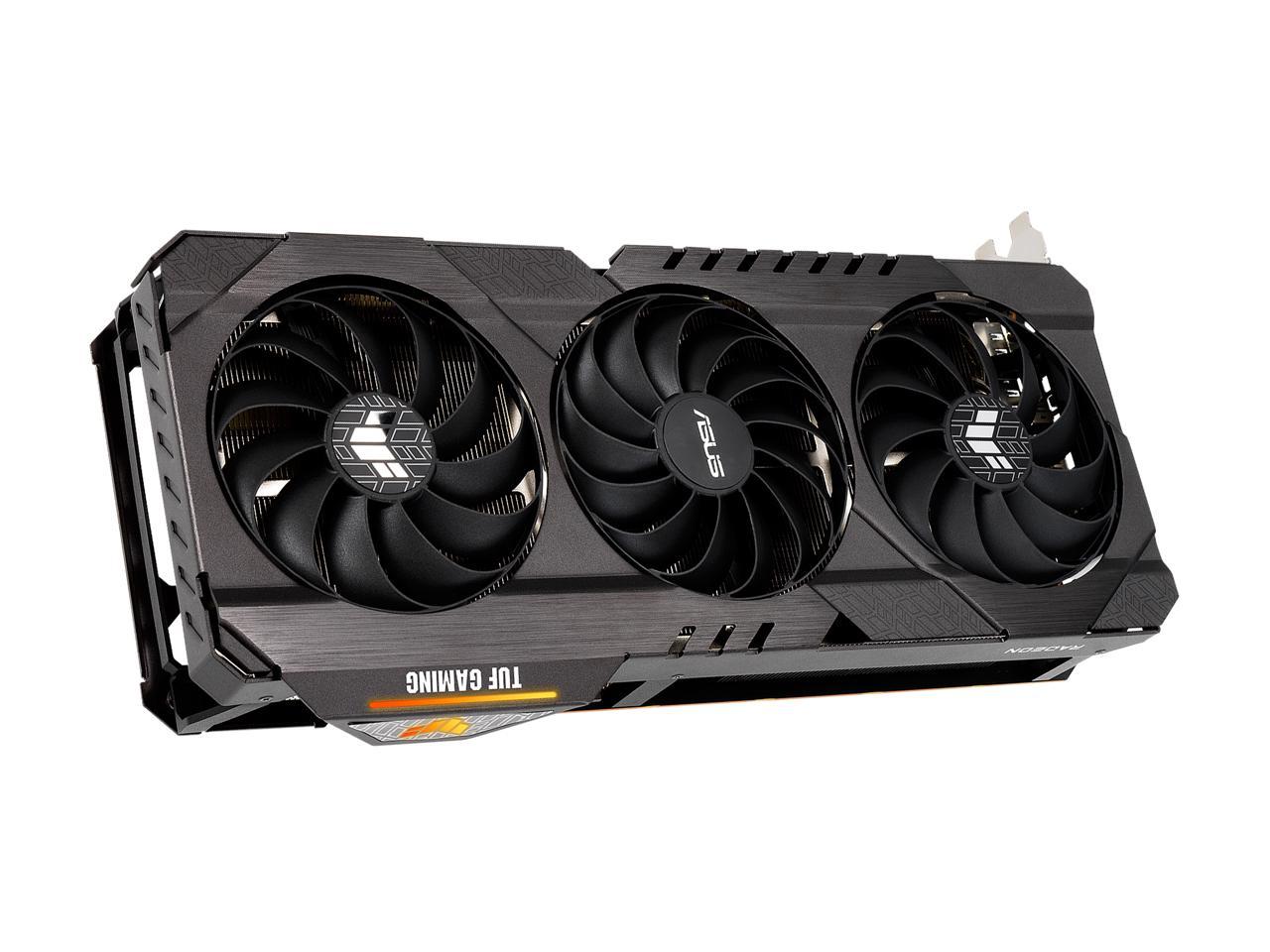 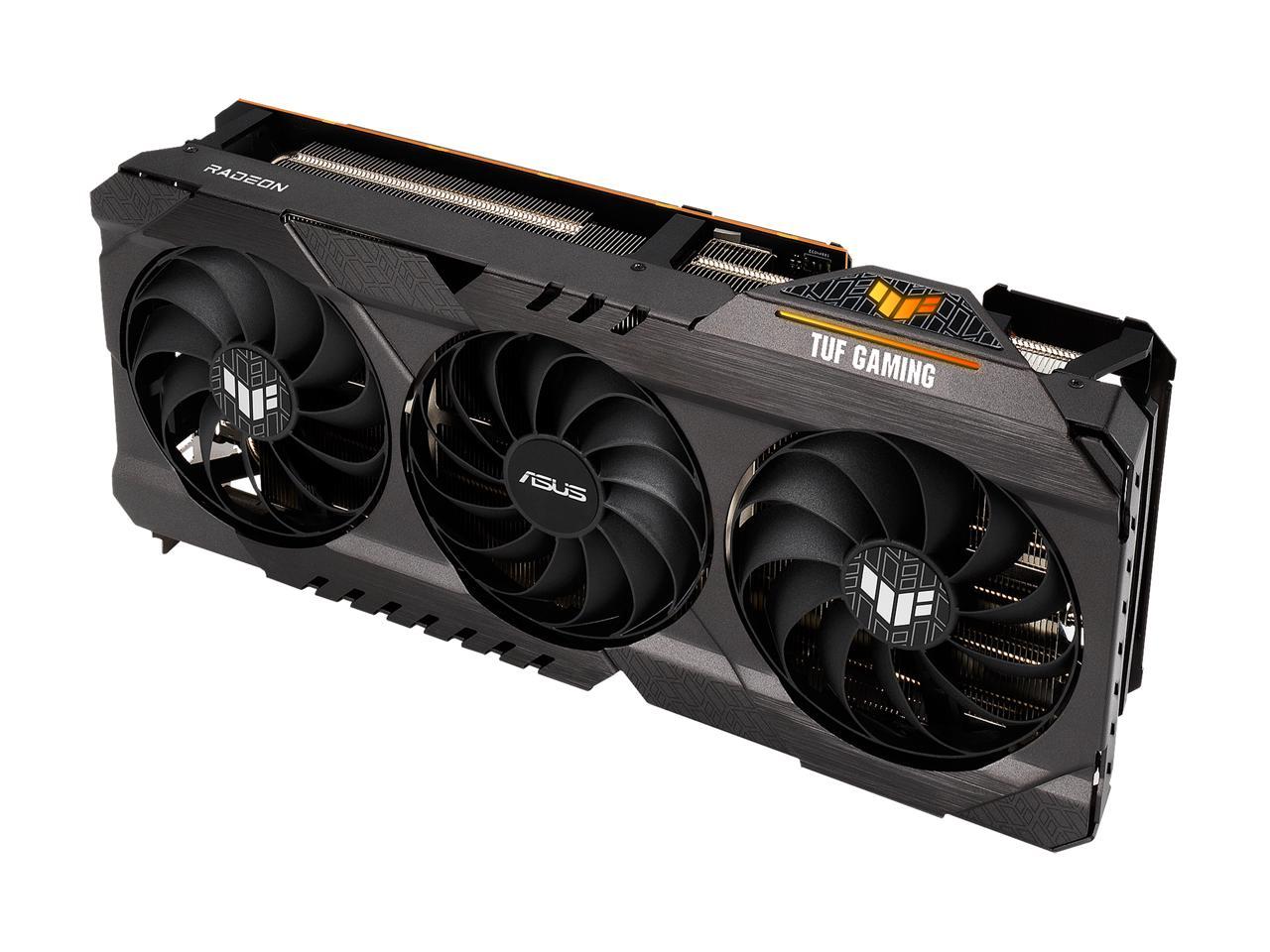 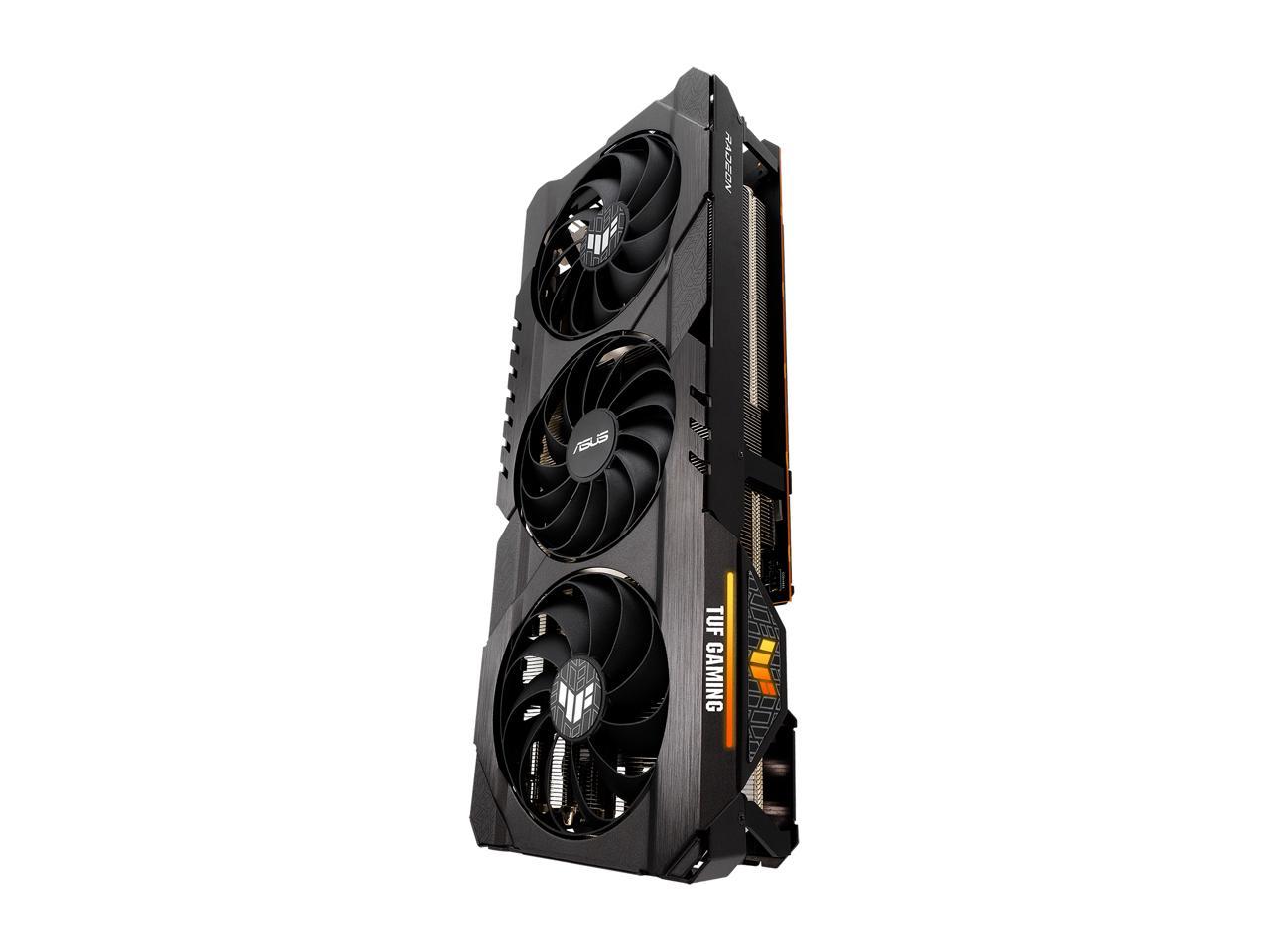 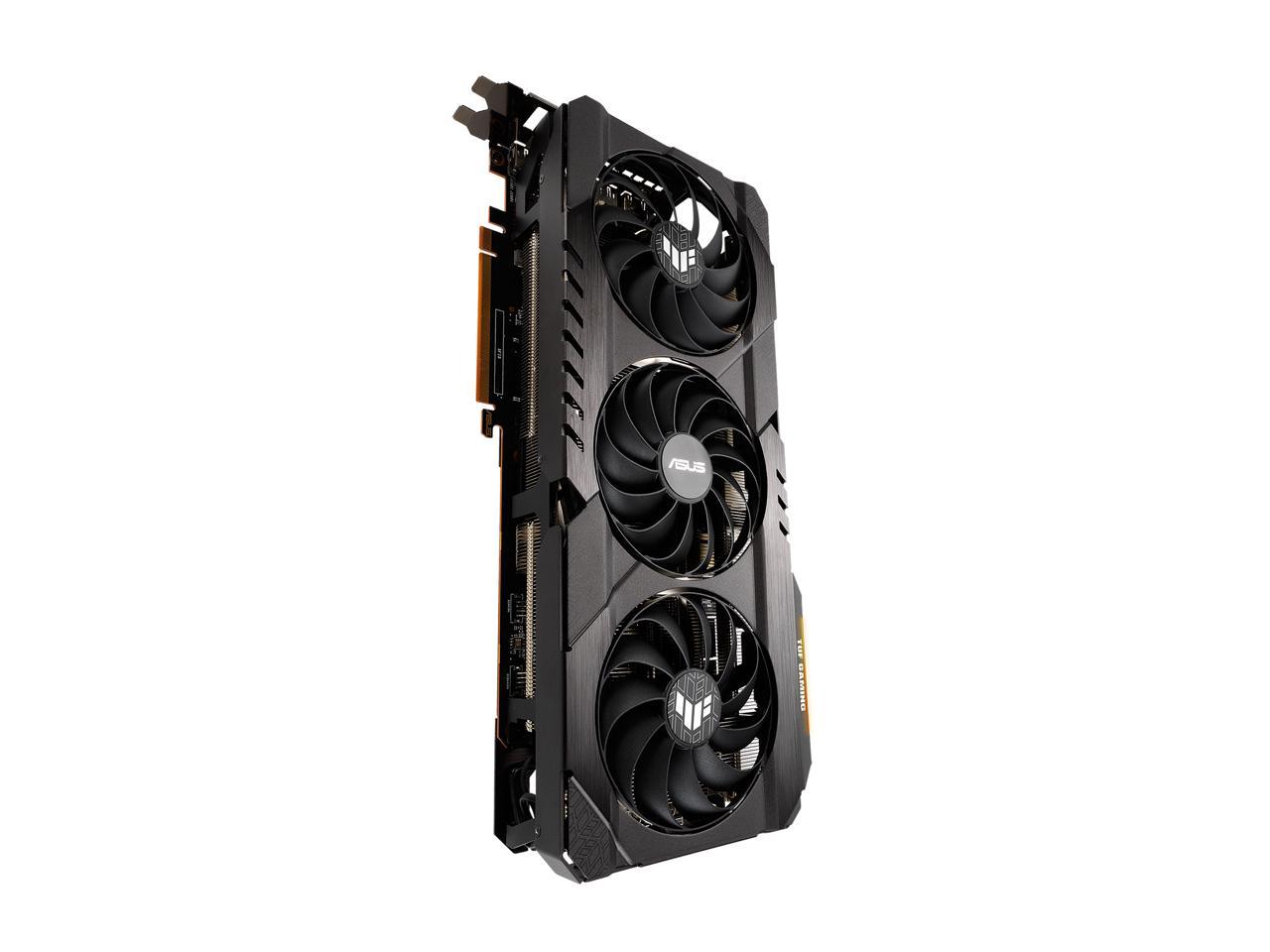 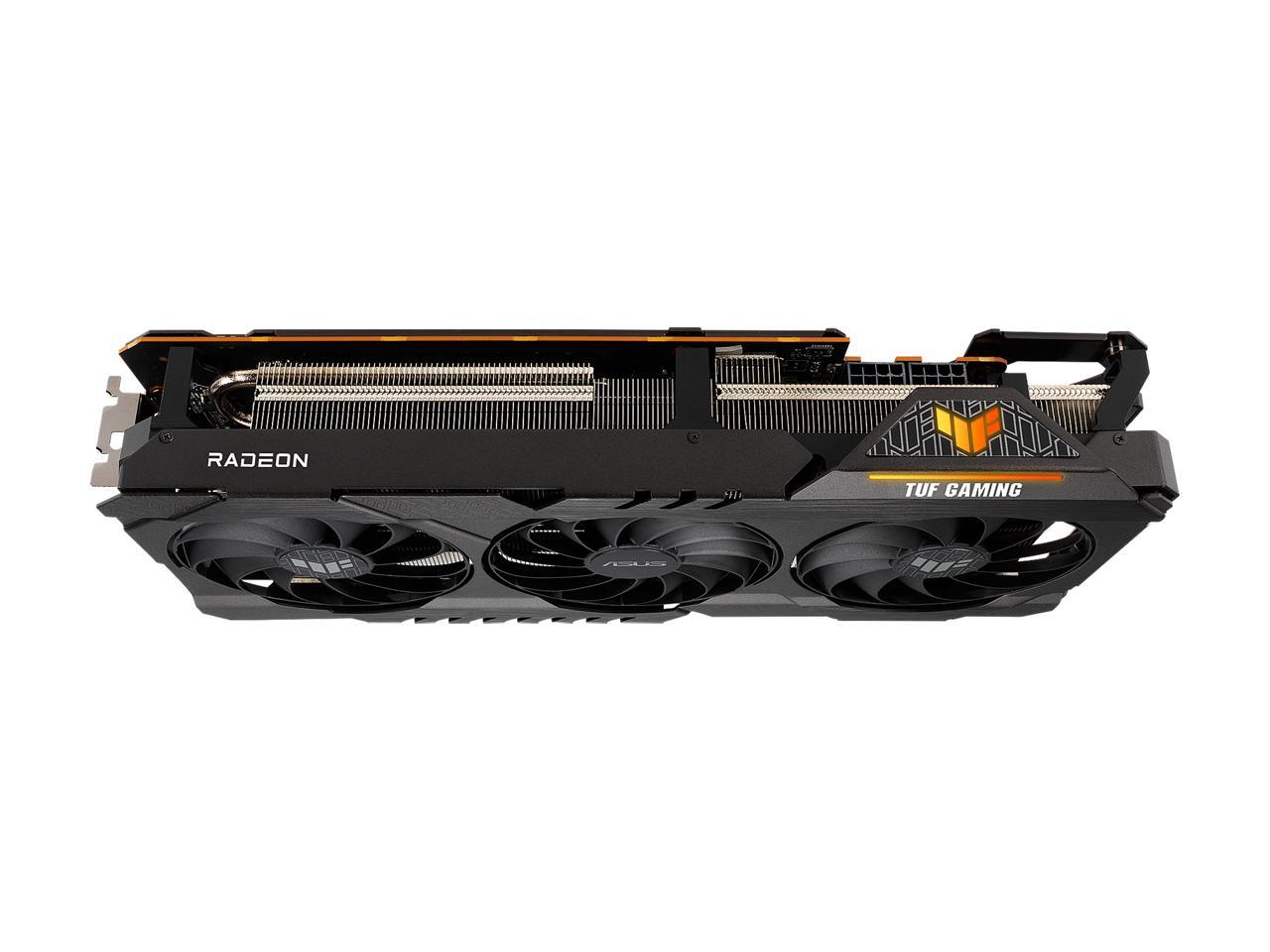 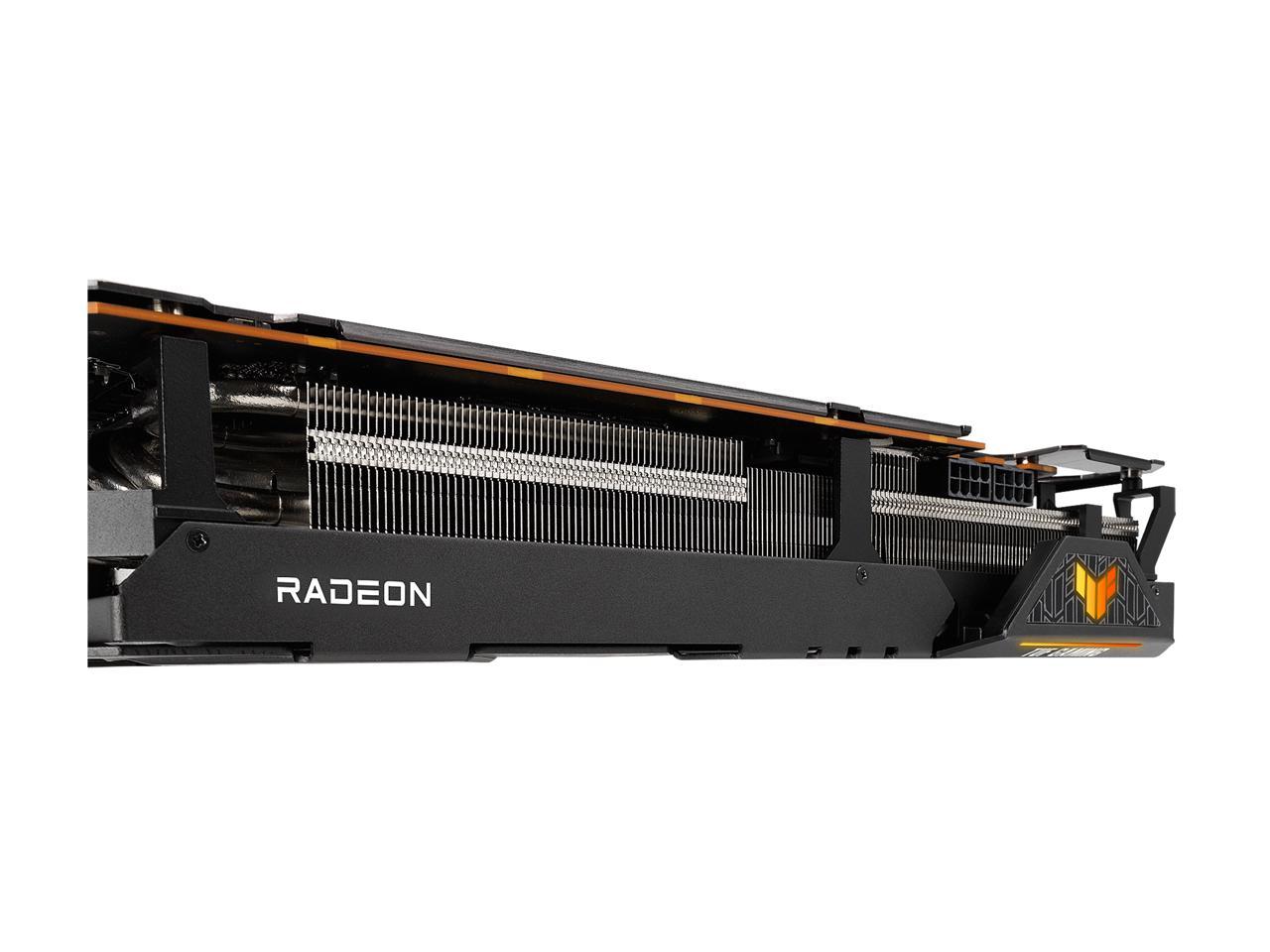 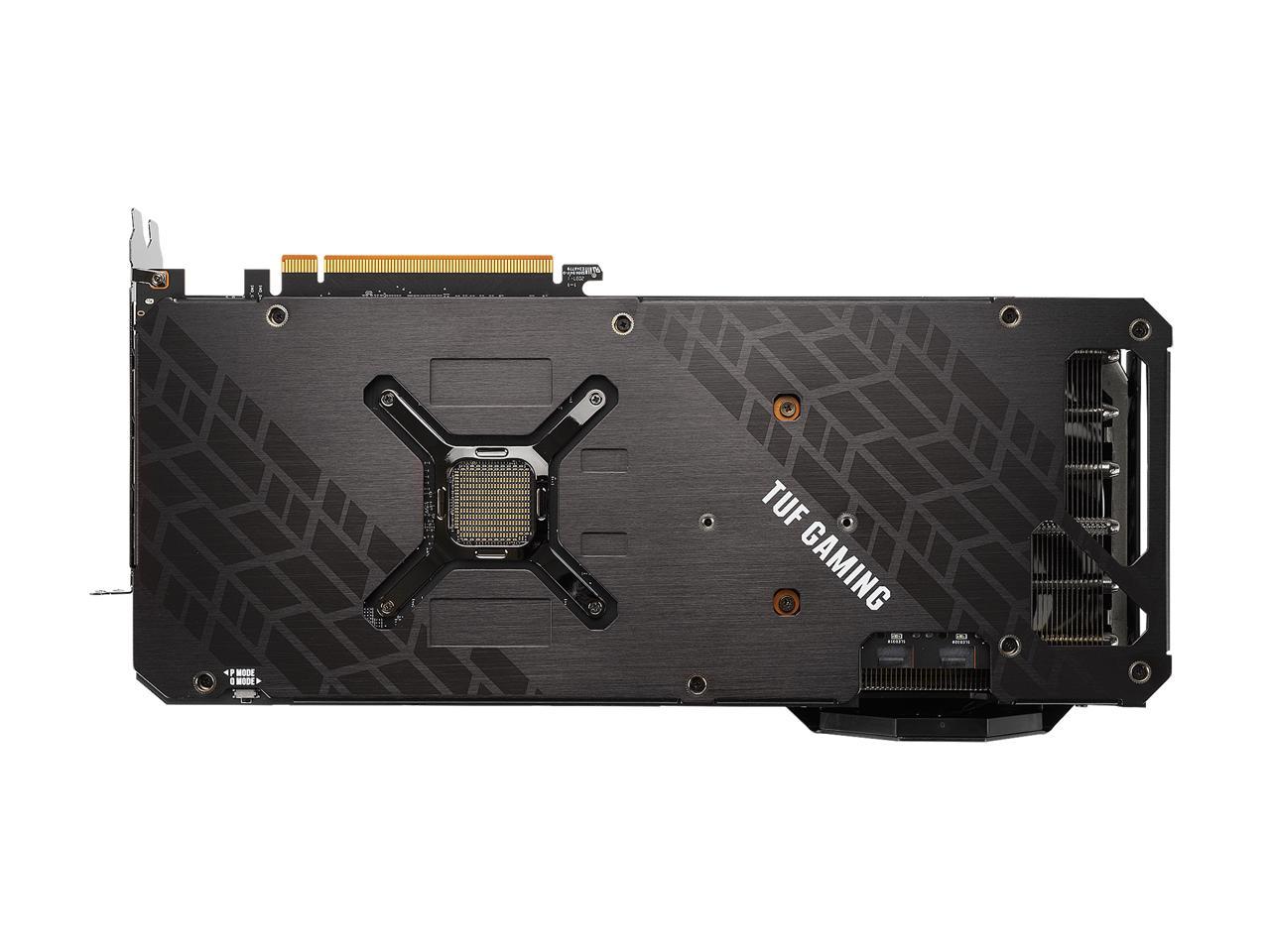 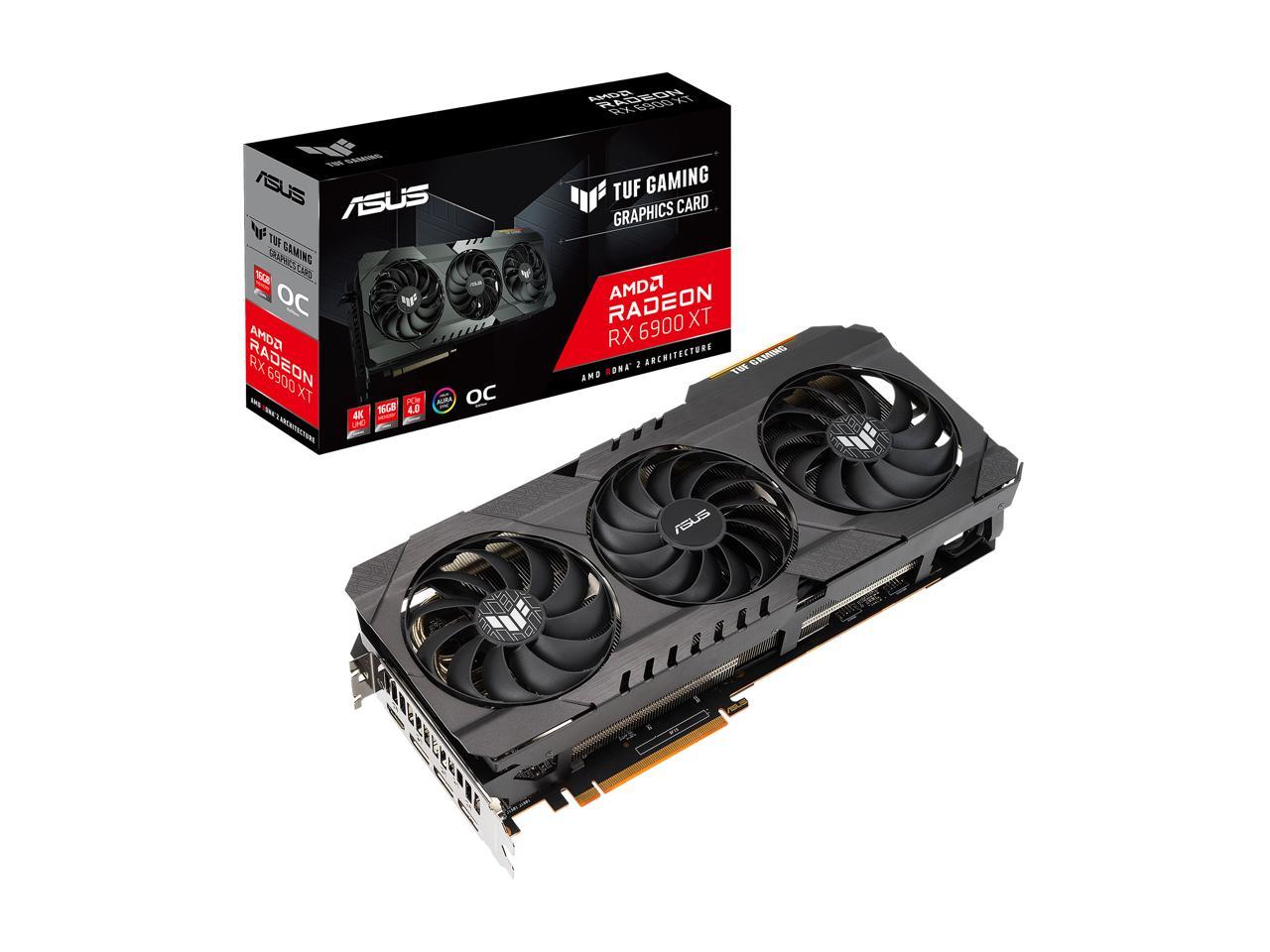 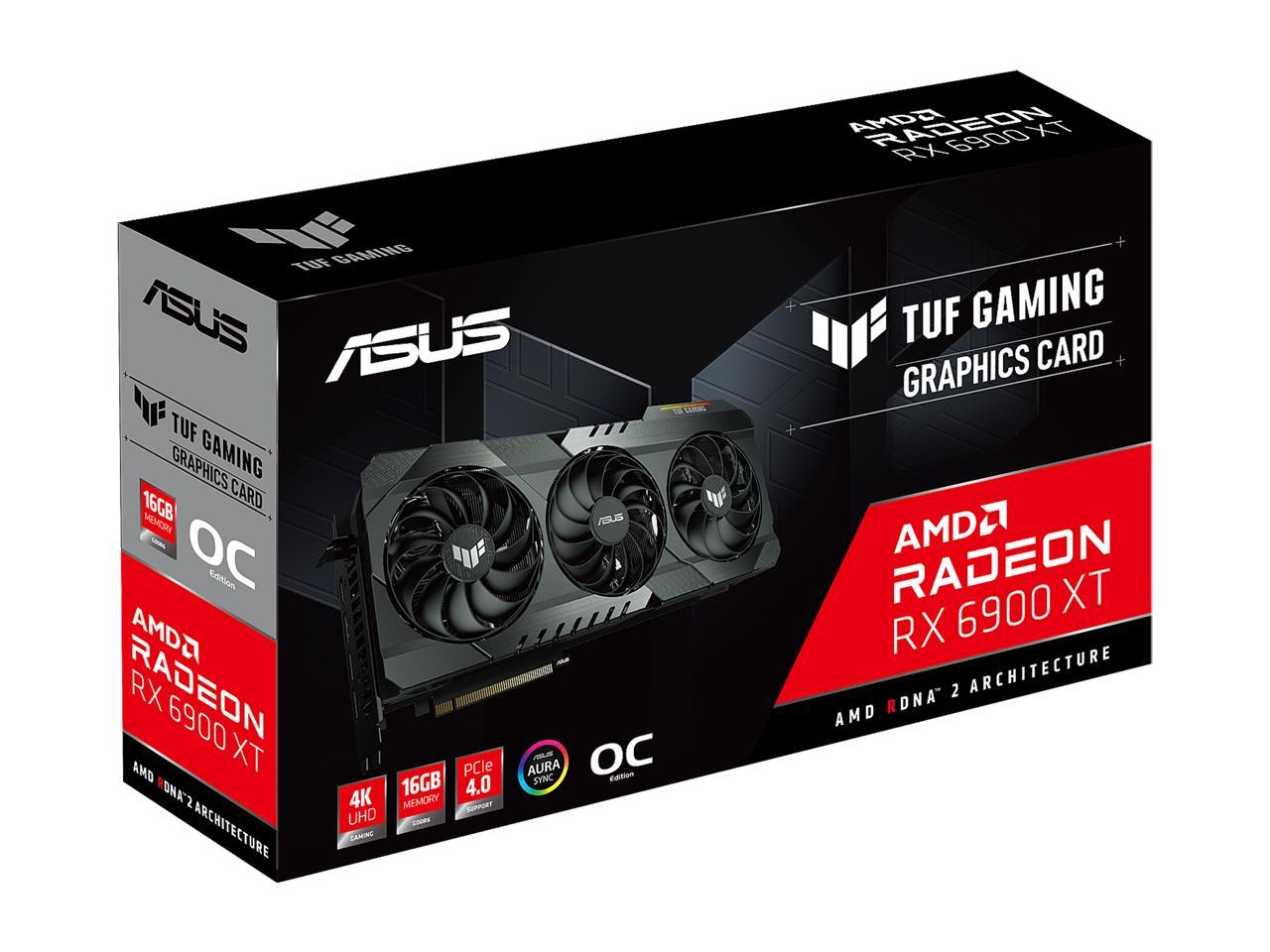 Learn more about the ASUS TUF-RX6900XT-O16G-GAMING

Cons: - It's a pretty big card, so make sure you have some clearance in your PC case, width wise. Had a little issue clearing the card and extension cables in my Lian Li 011 Dynamic. - There might be some GPU sag if that's a con to you. - FSR is okay, Ray Tracing is meh, but I don't use any of those features tbh. - Personal hotbox heater.

Overall Review: Placed an order on this particular GPU since I couldn't find any great deals on 3080s or the TUF version of the 6800 XT. Saw this in stock on Newegg and I had to cop! This being my first ever AMD GPU, I didn't keep my expectation too high. Shipment from Newegg was immaculate (Read some horror stories from Reddit) but it arrived on my doorstep a day earlier than expected (12/14/2021). Updated the AMD Radeon Driver to 21.12.1 with no issues whatsoever. Overall: It's a great card that plays triple AAA titles at Ultra 1440p flawlessly. Average temps on the GPU is anywhere between 60F-71F depending on the title which I find exceptional. OC very well and maintains those clocks very well. Now if DLSS/Ray Tracing is your thing. I would suggest getting a RTX 3080 and up. Some games prefer AMD, some games prefer Nvidia, just keep that in mind. 5/5 for me since day 1. Very pleased compared to my 1660ti, 2070 super, and 3070 that I tested with! Build Specification: CPU: AMD Ryzen 9 3900X MOBO: Gigabyte Aorus X570 Master (on the lastest bios) RAM: Corsair Vengeance 4x8 @ 3200MHz Cooler: Cosair H150i Elite Capellix Storage: 2TB NVMe Samsung Evo 980 GPU: Asus TUF RX 6900 XT OC PSU: EVGA Super Nova GT 850W 80+ Gold Case: Lian Li 011 Dynamic Monitor: HP Omen 27i 165Hz 2560x1440p

Cons: - HEAVY, but the card is made of metal what do you expect. - Minimal RGB, but that could be a PRO or a CON, I personally wish it had a bit more.

Overall Review: Obviously if you care about ray tracing this isn't the card for you. Personally I had a 3080 for almost a year before this card and turned on RTX 2 or 3 times and was underwhelmed. If you care about rasterization only this card is a no brainer as it performs roughly at 3090 levels but is considerably less money. I'm constantly astonished at the frame rates I get with this card. No driver issues at all in the 2 months I've had the card and the Radeon software is much better than I anticipated. Highly recommended.

Pros: Card is paired with a 5800x and it runs most modern titles at high frames running at 1440p and solid frames running at 4k contingent upon title. Right now, utilizing it with a 3440x1440 and a 4k Sony x900h. Temps around 29-33 at idle running on air Temps hover between 65-75 under heavy load

Cons: On resource heavy gaming titles and rendering applications, the GPU has started to experience power spikes upwards of 880W which causes a black screen making my pc hang: Kernel-power Event ID 41. I have an 850W EVGA Supernova G2. The recommended wattage for this GPU is 850W. With the current pairing (5800x) the PSU cannot handle the power spikes. I am currently working on replacing my PSU with an EVGA P3 1000W. If gaming settings are turned down, or the GPU is undervolted it can help with temporarily putting a band-aid on the issue, but it is unacceptable that the card can't run resource intensive games and programs at stock without changing settings running with an 850W PSU.

Overall Review: Will update my review once I replace the PSU. Originally rated it at 5 eggs, right now in its current state I would rate it a 3/5.

Cons: No DLSS, has some issues with Radeon ReLive audio sometimes not being synchronized. Card is 13 inches long make sure it'll fit in your case ESPECIALLY if you are using a front mountes AIO

Overall Review: I would recommend this card to anyone that was tired of not being able to get a 3080/3090 or 6800 XT. I used Stock drops Discord and Apple Pay to check out super fast. I haven't seen this card come in as frequently since then, 6900 XTs have the best shot of landing you a purchase.

Pros: Fast Handsome Reliable (when you get one that works) Drivers

Overall Review: I never write reviews, but I had to for a purchase this big. Day one I started having black screen issues. My PC would black screen, Mobo would flash GPU not found codes and lights. I had hoped it was a driver issue. It wasn't. RMA'd the card for repair, received a new one. Despite it showing up in a normal cardboard box with a deficit of packing materials (imo) the second runs fine. Just wish it never happened and that Asus would have sent my original box back... It's a fine card, and the drivers are good and bad. They pack in some nice features. It really depends on your system, as AMD drivers work in mysterious ways. Mine won't use Windows Media player, but VLC runs perfect. Be sure to have that serial number ready, and keep the box. Asus won't send it back to you, but at least you know it probably get back to them in one piece.

Pros: This card is insanely fast at everything, 16 gigs of memory, low temps, runs perfectly in Linux (Xubuntu 20.04) with a better video card controller then my 2080 TI in Linux. (Radeon Profile) It plays all my games (World War Z, KillingFloor 2, Payday 2, Red Dead Online, Borderlands 1-3... (all on Steam Play in LINUX) on ultra temps about 40C in LINUX. Windows gaming 53C, I only tried a couple games in Win 10 Pro just to test the card then back to the stable OS Xubuntu 20.04. And for real world stuff like Blender, Gimp, Handbrake in Linux 80% to 100% GPU I still have only seen a max temp of 48C in LINUX. I dont use any of those things in Windows 10 Pro its just to slow of an OS. Benchmarking: Well hands down it destroys my RTX 2080 TI XC Ultra. Just go to futuremark and look which cards rule the top 100. :) This card is very fast and yes is has Ray Tracing which of course I never use. :) So for me that is a pointless feature. Leaving benchmark numbers out this time attempted review #3

Cons: 1. The STUPID RGB I had to put tape over the RGB. In windows I guess you can install a bunch of software to control the color. I will try disabling all RGB in the bios. I wouldnt mind just the AMD red. (leaving out why I don't like RGB attempted review #3) 2. The PRICE Im hoping this is just a phase and the prices of everything will drop again some day. My RTX 2080 TI XC Ultra was not cheap but the prices on video cards right now are INSANE.

Overall Review: I would definitely recommend this card to anyone. I have already told all my friends GET THIS CARD if you can find one! :) So if you are Superman or a Marvel Super Hero and play games at 4k for the price I would still get this card. So you will get 77 FPS instead of 93 FPS at 4K. Im good with anything above 60 FPS again Im just a mere human and I have limited eye & brain cognitive abilities. :) Temps: I'm not sure why so many people have such high temps maybe poor air flow in their case, too many other hot things around the video card? My water cooling on the 3970X Threadripper is all external, I have a huge case with three 8.6 inch / 220 mm fans and one 4.7 inch / 120 mm fan. Idle temps in Linux and Windows 29C to 33C on a custom fan curve. Power: I have a Corsair 1050w single rail PSU so no problem there. The highest power use I have seen was in Windows 10 of course 217 watts. In Linux the highest I've seen is 127 watts why do people still use Windows? LOL On idle in Linux around 8 watts and in Windows 10 around 11 watts. Size: The card is big and heavy 13 inches / 330 mm and seems to need support on the right side outside corner. For me my hard drive rack was perfect and the card has a nice steal frame. So I just put a zip tie on the outside right corner right up through the hard drive rack to hold up the right outside corner of the card. Third Attempt at a Review: The first two did not get posted by NewEgg not sure why? I wish they would just say please edit the review. LOL But this time I wrote it in Libre and copied & pasted it so I dont need to start over again. :( My System: Case: Thermaltake Core V71 Tempered Glass. Motherboard: Asus Prime TRX40-Pro. CPU: AMD Threadripper 3970X@Auto OC. Water Block: EK Velocity sTR4 copper & nickel. Radiator: Thermaltake Pacific CL429 64mm pure copper. Water Pump & Res: 320 GPH Pond Pump, 5 Gallon Reservoir. Memory: 64 gigs Corsair Vengeance DDR4-3600 18-19-19-39 CR1. Video Card: Asus TUF AMD RX 6900XT OC 16 gigs Hard Drives: 1 Crucial 256gig M550, 3 Crucial 2TB SSD's, 1 Western Digital 5TB 128meg cache, 2 Seagate 4TB 256meg cache. Power Supply: Corsair 1050 watt SINGLE RAIL. OS's: LINUX Xubuntu 20.04 LTS x64 and Windows 10 Pro. Thanks for reading beast-usa

Cons: I put this in a new build a week after I got it - and after a month of non stop issues with Warzone and Zombies - thinking the games were the issue, this card completely died while playing Zombies just yesterday. Gets power as the Tuf logo illuminates - no video output at all. Extremely disappointing.

Overall Review: After so much time wasted in trying to figure out why my frames were all over, as well as low with setting all up in game, not sure changing back to AMD was worth it from a GPU perspective.

Manufacturer Response:
Dear Javier, It is unfortunate to hear that your video card is having performance issues such as crashing while you are playing video games and is no longer getting a video signal Have you tried remounting your video card and checking all cables are properly secured? I would love to help you troubleshoot more on your issue, if you are interested. Feel free to contact me at cl-justin@asus.com. I'm here to assist our customers with our products and dedicated in bringing a resolution to all issues that they may come across. Your case for reference is #N2104017632 Thanks for choosing ASUS Regards, Justin ASUS Customer Loyalty - US Support