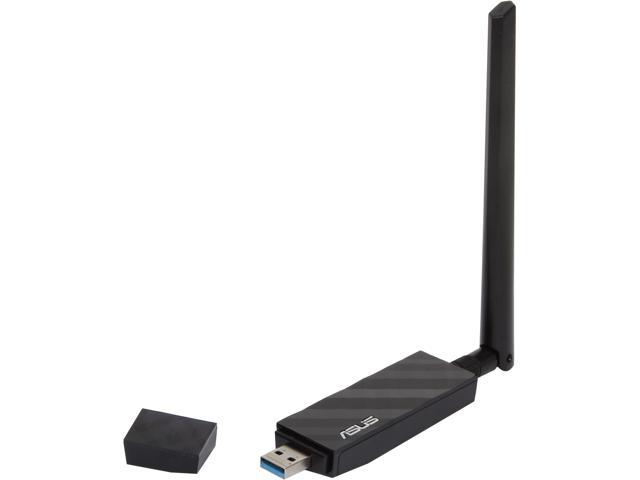 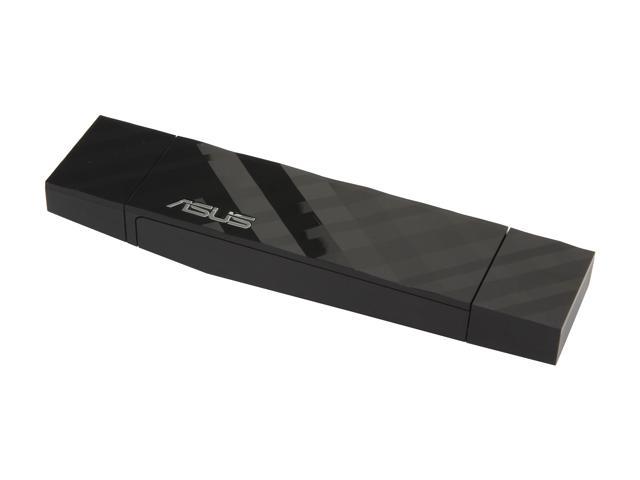 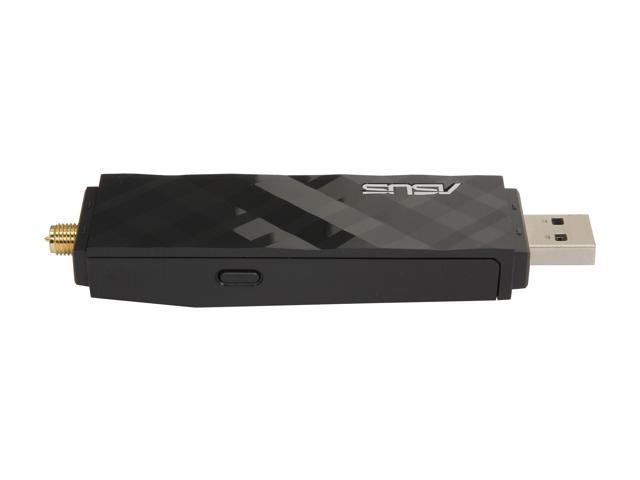 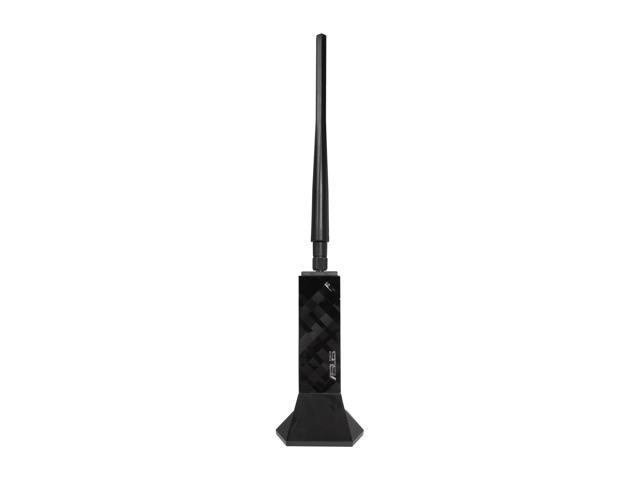 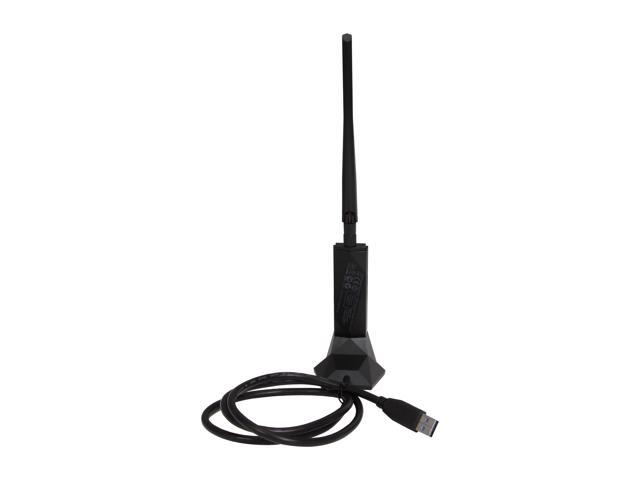 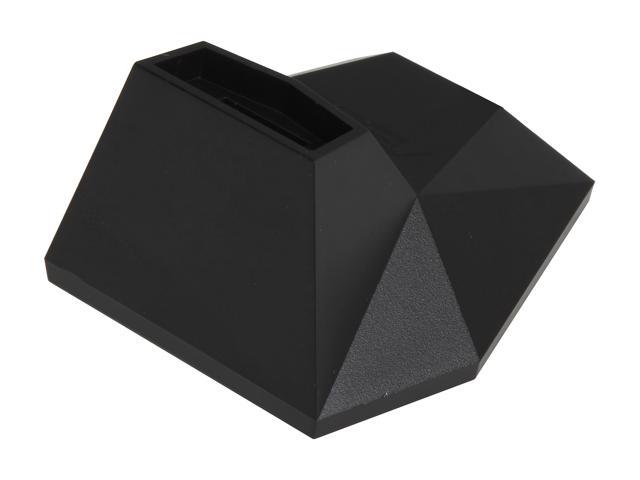 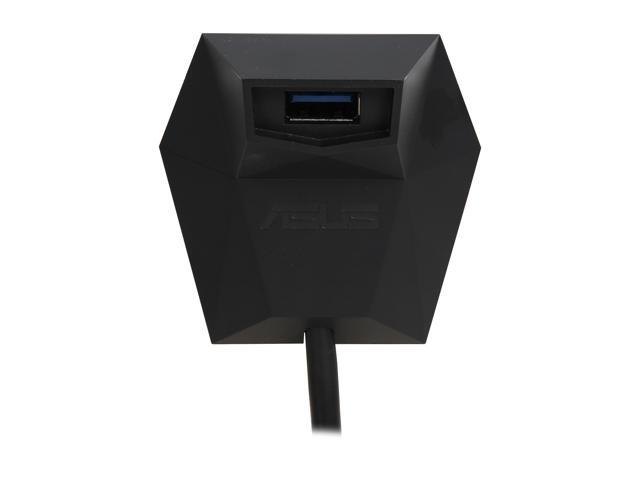 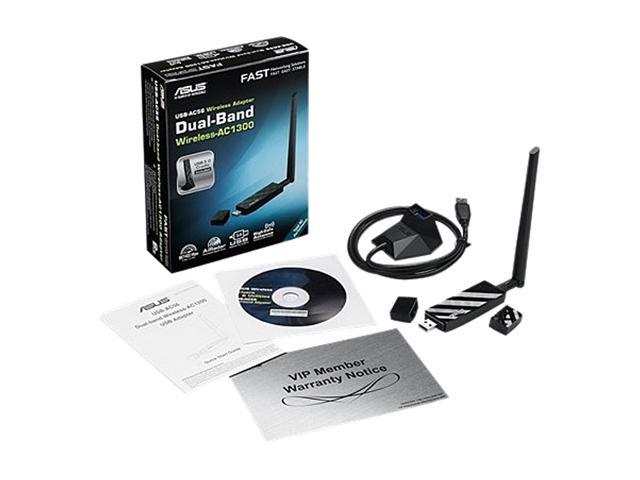 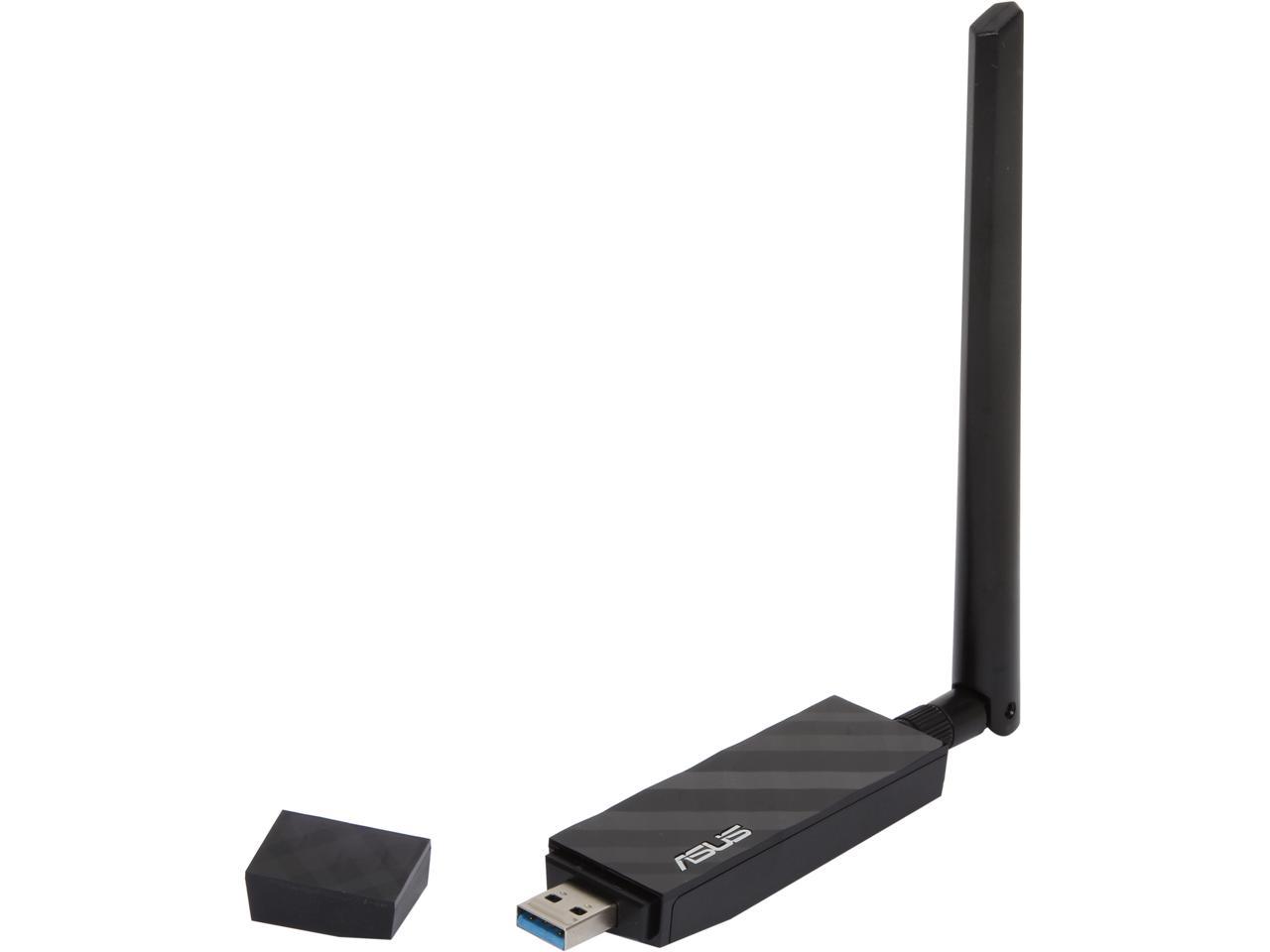 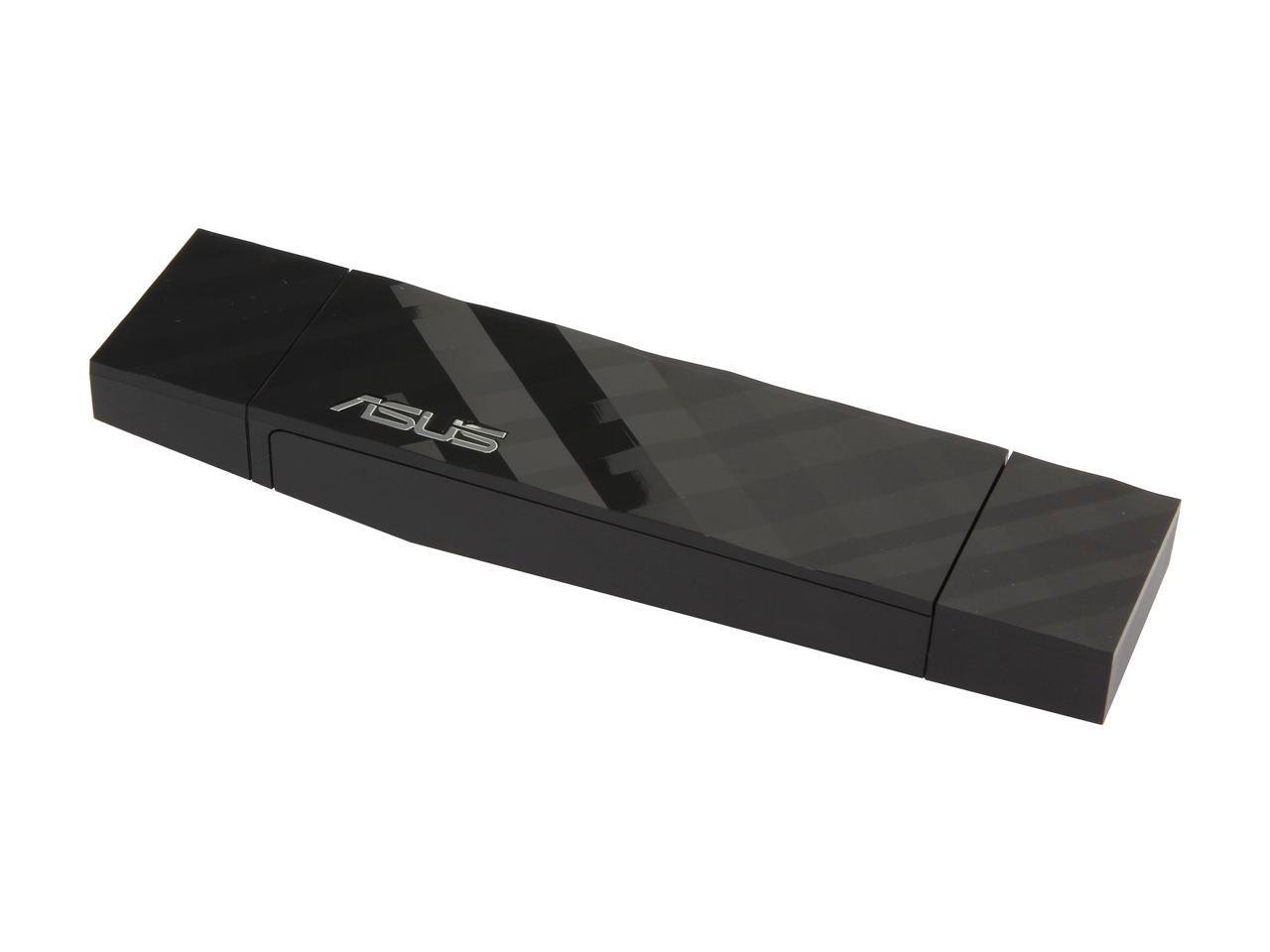 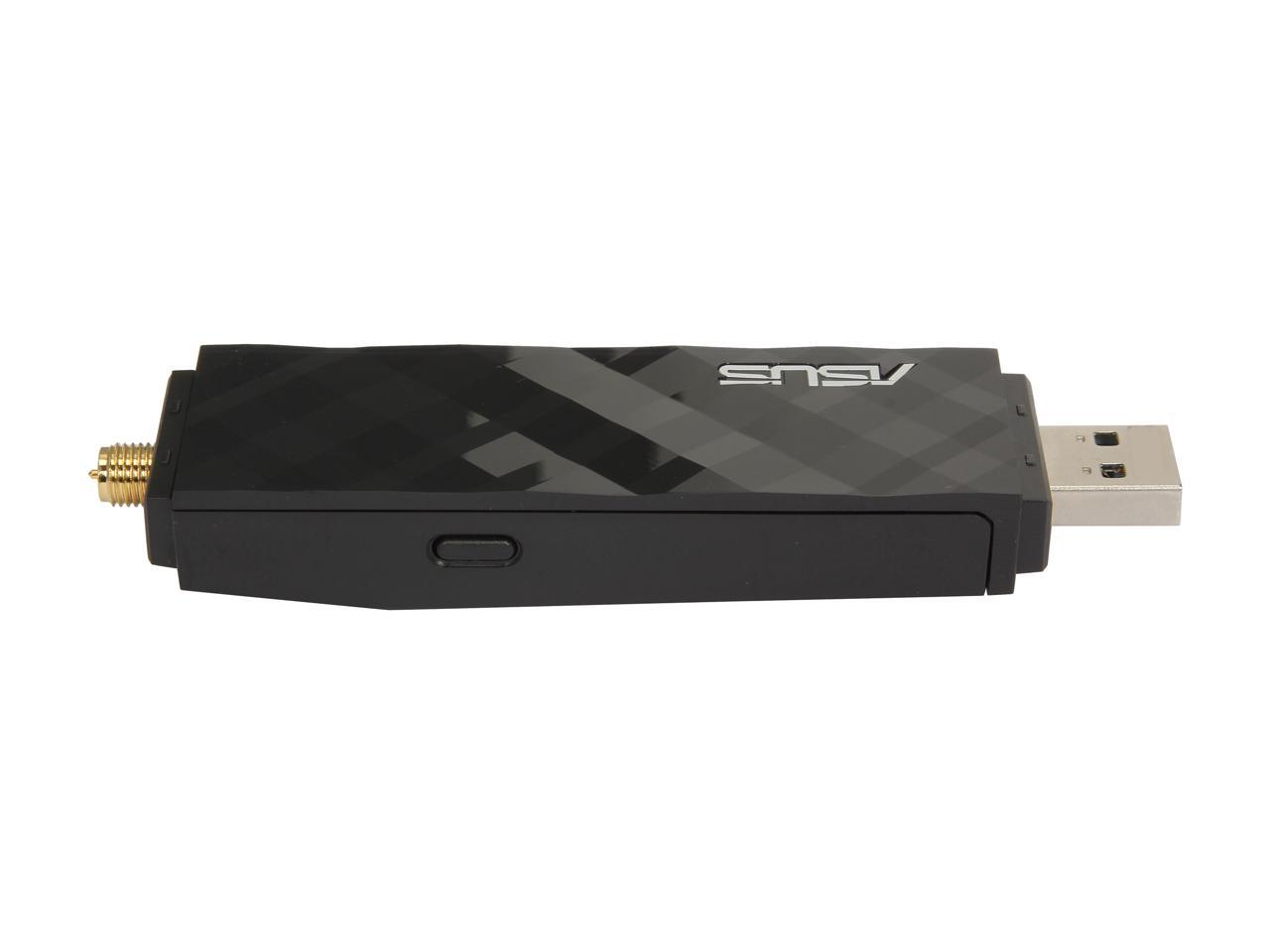 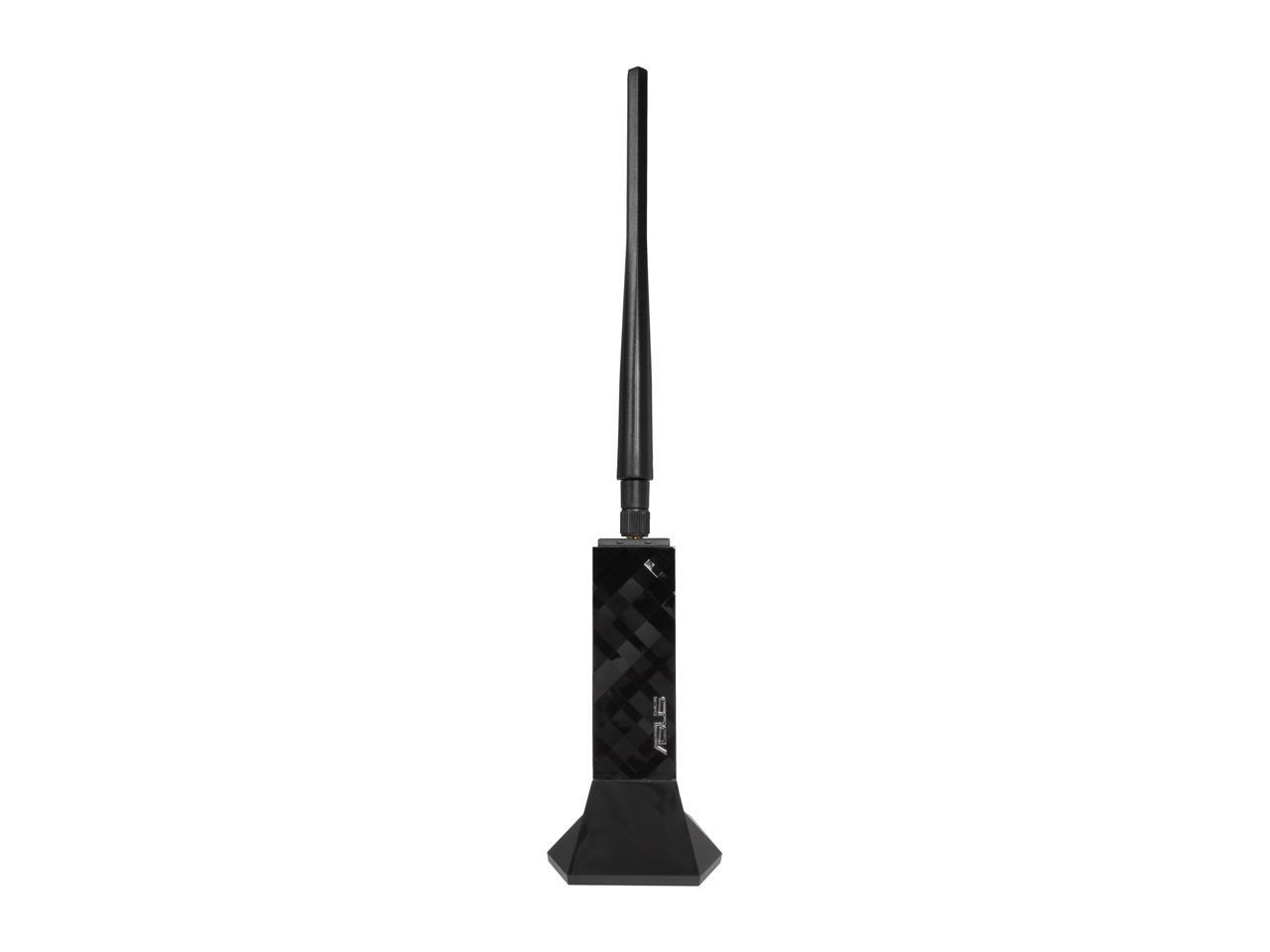 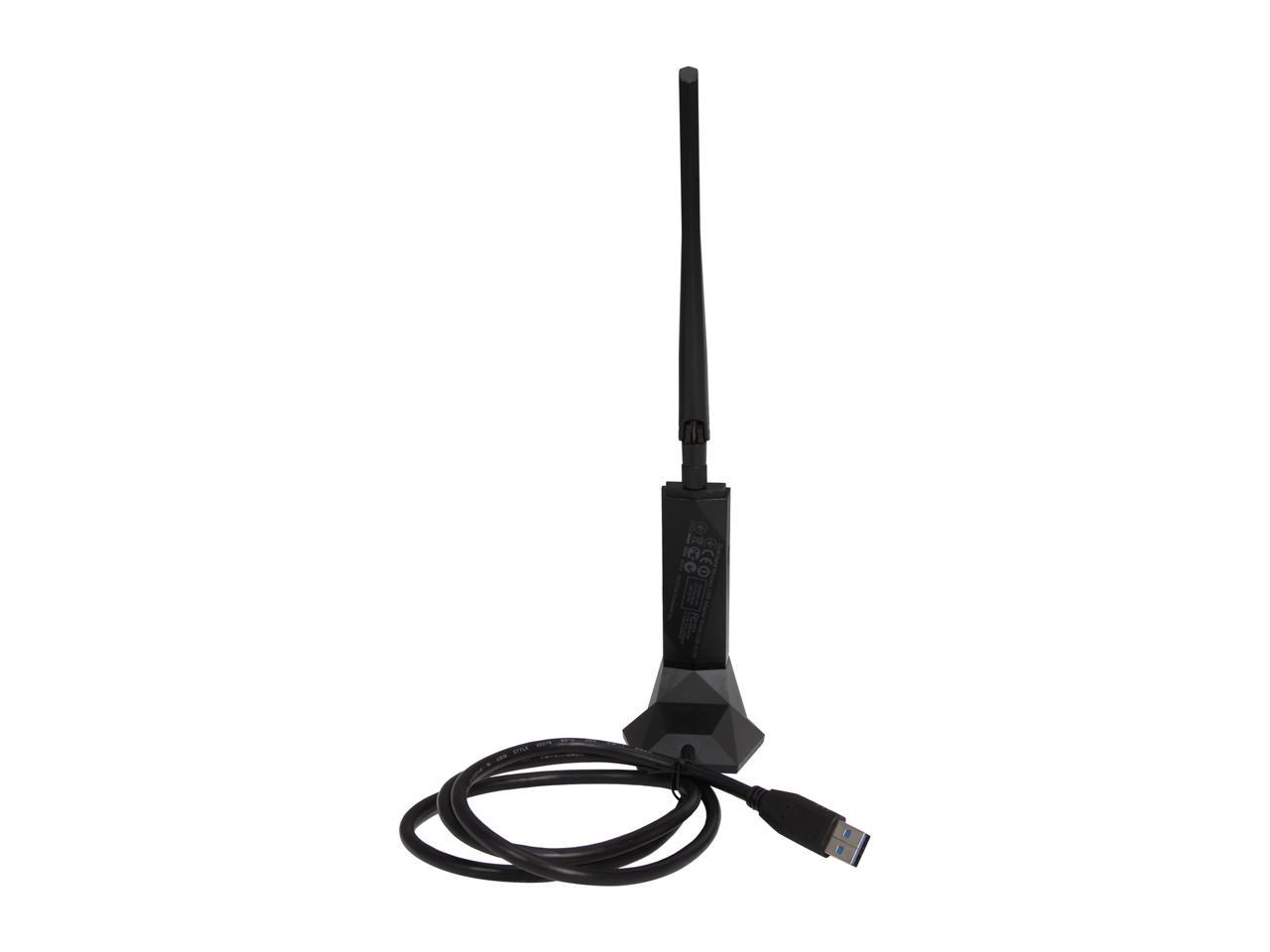 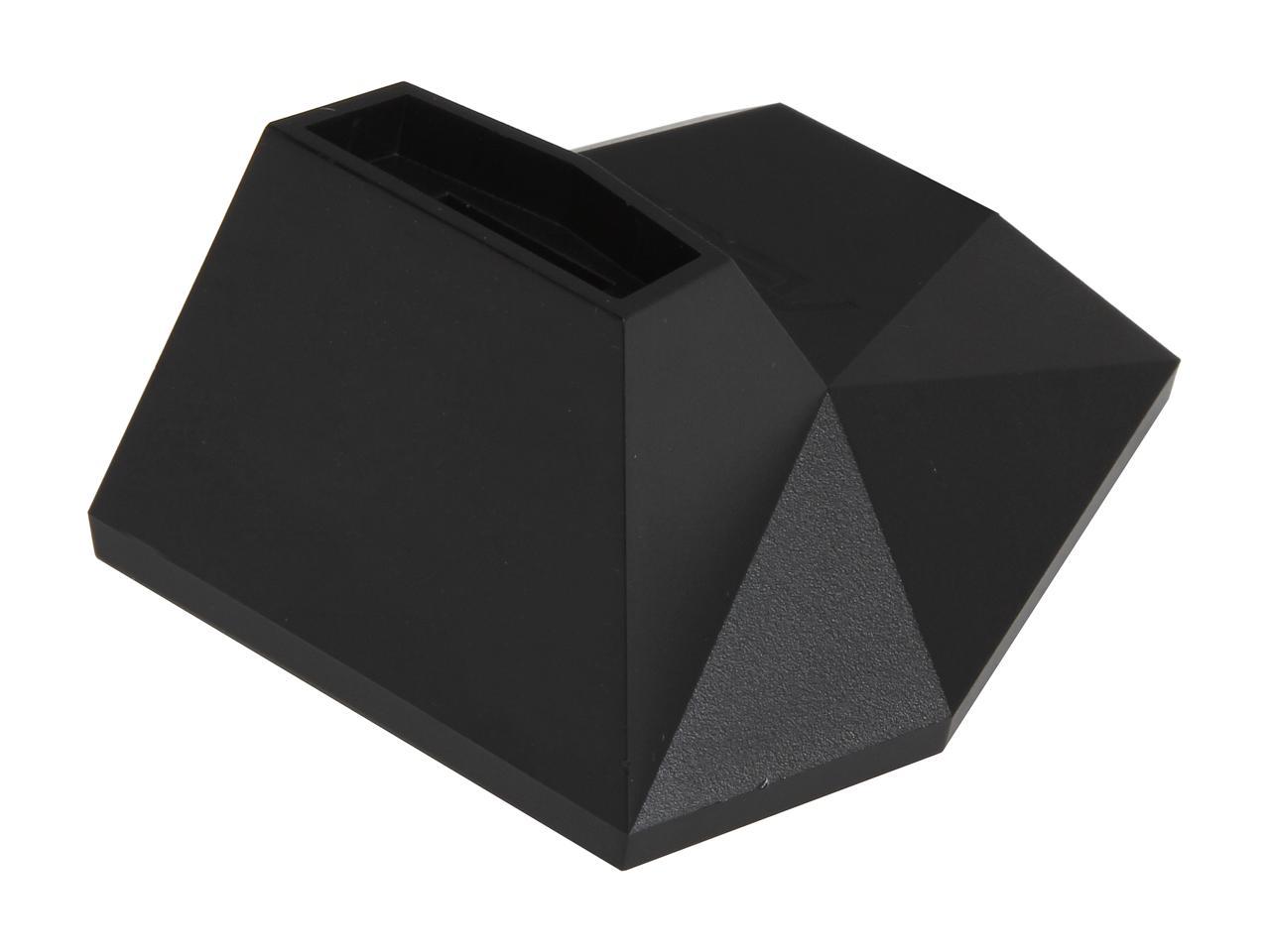 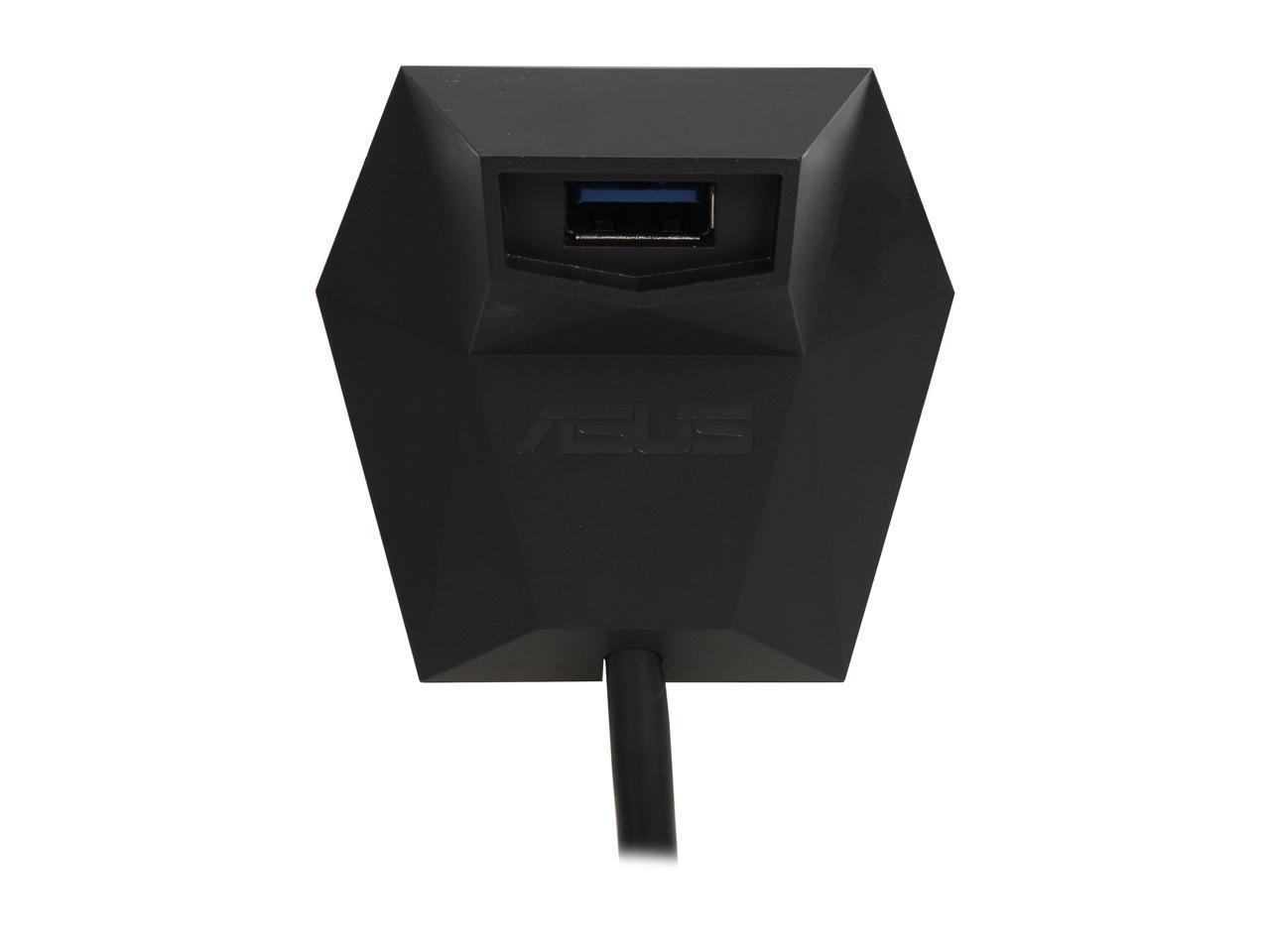 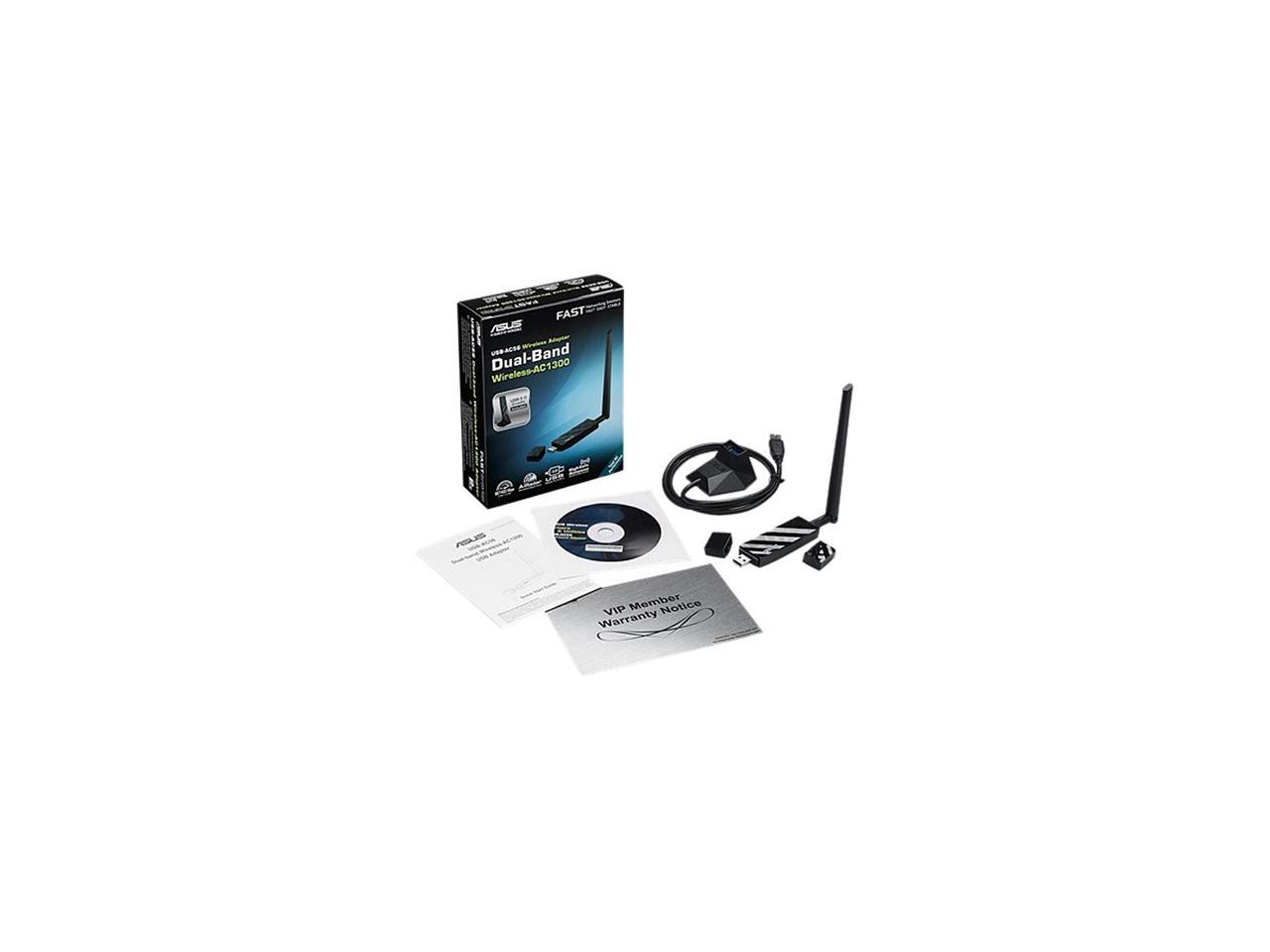 Learn more about the ASUS USB-AC56

Pros: I ran some thorough tests with the ASUS adapter versus Netgear's close competitor - the A6210 Wireless USB adapter. I had them connecting to the ASUS RT-AC68U router with the latest stock firmware with minor custom configurations (QoS, channels, etc.). Tools used for testing was Acrylic WiFi, some Android apps and Netstumbler. We're on a fast Comcast 200mb (down)/15mb (up) connection and the adapters were tested on an MSi GT70 gaming-grade laptop running Windows 10 64-bit.<br><br>The ASUS runs slightly faster than the Netgear, had much better beamforming, and was pretty much plug-n-play. I didn't bother with the drivers supplied with the disc as I normally rely on visiting the manufacturer's site for the latest stable firmware. The ASUS utility is good -- shows link state/speed, IP info, and other basic information. 5-10 feet away from the router and this thing works as advertised: 867+mbps on 5ghz and excellent speed on the 2.4ghz as well. The fastest I was able to register right next to the router was 192Mbps (down) and 13Mbps (up) which means I'm almost reaching the total speed our ISP provides us.<br><br>The real test was moving throughout a very large 8-room, 2-story house and testing the connection through several walls, corners, and 2 thick exterior brick walls and glass. Due to wiring, my router is located in a downstairs room on the far corner of the home and not near the center of the home as it should be. Unfortunately some of the WiFi radius bleeds outside toward the neighbors, but thanks to the 4 adjustable antennas on the router I have them all pointing in certain directions with no major dead zones in the house.<br><br>From about 30-40 feet on the upstairs landing (in line of sight with the router) my laptop was still registering a 5ghz link speed of 867Mbps. Farther down past 2 bedrooms (no line of sight to the router and going through several walls) and my connection slightly dipped to 600+. <br><br>In the farthest upstairs room directly opposite from the router downstairs, I was able to establish the 5ghz link at 325Mbps. What was really impressive is how well beamforming was working when I repositioned the usb cradle and laptop in different locations in the room. Using the provided ASUS utility and additional tools, I could actually see the link gradually increase until it maxed out just over 585Mbps. I'd say the adapter is doing a great job considering the location of the router and that the 5ghz frequency has to pass through several indoor walls/floor, 2 exterior brick walls, a balcony with iron railings, and dual-pane glass. 5ghz has less of a range and penetration compared to 2.4ghz so the drop in speed was expected. Despite this, I'm very satisfied with the performance. The fastest speed I was able to register from the farthest upstairs bedroom was 174Mbps (down) and 12Mbps (up). Upstairs speed on 5ghz is almost as fast as being right next to the router. This was accomplished through adjusting certain settings on the router (disabling TX burst, changing the channel bandwidth to 80mhz, disabling airtime fairness, etc.) I'm stoked at the speed!

Cons: Too bad the cord for the usb cradle isn't longer. That's not enough to subtract an egg though. The cord is rather thick and seems to provide good shielding.<br><br>It's a little heavier than I expected due to the antenna but not a big deal for me since I'll mostly use the usb cradle.

Overall Review: I'm very pleased with ASUS networking products compared to other competitors. It's very rare that I have an issue with them.

Pros: This adapter might be more on the high end regarding price, but it's definitely worth it if your main setup can't use a wired connection and you need a reliable wireless adapter for important work (or gaming). I went through at least three other cheap adapters from other brands and having them break or just die before purchasing this ASUS adapter. I knew the ASUS brand and had a good feeling before I purchased. My PC is online 24/7 and this adapter hasn't had any issues for well over a year of being constantly running with only a few reboots. Very fast and reliable, assuming you have a modern wireless router and stable internet.

Overall Review: It might cost more, but will save you money down the road if using a wireless connection is a must for you. It is USB 3.0 and has a small external antenna.

Pros: This is about the ASUS USB-AC56 wireless-AC1300 USB 3.0 Wi-Fi adapter as purchased in April, 2016. Well, it can be made to work, with some effort: an 8812au driver (rtl8812AU_8821AU_linux) from github - (link) https://github.com/abperiasamy/rtl8812AU_8821AU_linux - did work for me with DKMS, both on Ubuntu 15.10 and Knoppix 7.6.0; I just followed the instructions from the aforementioned web page to add/build/install using the dkms command. (Using "make" failed for me.) With that 8812au kernel module the ASUS USB-AC56 reception strength was reported as weak relative to that when a Gigabyte GC-W5300D PCIe card was installed in the same host (that PCIe card uses a Qualcomm Atheros AR5B22 / AR9462 chipset / ath9k driver), but at least this ASUS USB-AC56 stick could be made to work with that github-sourced 8812au driver.

Cons: At this writing, this device _won't_ work out-of-the-box in at least a couple of recent (in April, 2016) 64-bit Linux distros: Ubuntu 15.10 and Knoppix 7.6.0. I then tried three different Linux device drivers, including one from the ASUS web site, all of which failed their builds somewhere in "make", possibly because of 32-bit vs. 64-bit architecture issues.

Overall Review: It would be nice if ASUS, or whoever is producing the drivers for Linux that ASUS publishes on its website, would get the drivers and utilities to build on my favored Linux distros when one runs the install script. Eventually _this_ version of this ASUS WiFi stick, as available in April, 2016 with _this_ RTL 88xx chipset, will work out-of-the-box on various future versions of Linux distros, but it's likely to be a moving target - by then ASUS might well be selling a product with this name using an altogether different chipset that no longer works out-of-the-box. Until we have true Linux device driver nirvana, where everything just works, I'll suggest the wikidevi.com site as a resource for hunting down drivers and related installation instructions.

Pros: On an Asus EB1503 with dual boot Win7 & Ubuntu 13.04. Came packaged with the latest driver 4.2.5 Used the following instructions to load the driver (from Asus site, same driver): Take Linux driver, unzip TWICE (don't know why Asus did this, but it trips up some people on the forums) Here is the terminal commands: cd (your folder with the 2x unzipped drivers) make sudo make install sudo modprobe 8812au The Win7 install went well with the CDrom, but have to check the speeds.

Cons: Like always, Asus instructions are AWFUL for linux; but they did update the drivers for a near painless install. I'm just glad I didn't have call their support line.

Overall Review: some people have has issues with maintaining stable connections. I am running these adapters on Win 7 machines without any real issues. Note* Router they are connecting to is an Asus AC1900

Cons: Only con is placement with cable adapter

Overall Review: Your router should be set to auto for 20, 40, 80 mhz channel width for the 5ghz. Had mine set to 40 in my router and this was connecting using 20. Set to auto and its on the 80 and max speed for the device.

Pros: Even in this concrete & rebar house I can get 390Mbs throughput no problem while being 1 floor down. Go 2 floors down and still a rock solid signal @ 240Mbps. I can't praise this thing enough.

Overall Review: I can't really knock it for anything. It does exactly what I need it to do, the software is great and not intrusive. When at home I like the separate cable/stand. The caps for protecting it while traveling is great. Only suggestion I would have is to be able to stick those caps on the base. It would give it just a bit more stability as well as a place to keep them when not in use.

Pros: Awesome. install the drivers and close the utility out. Just use the stock wireless connectivity option in windows. I have bought multiple of these for customers and they are great.

Cons: It is a very long USB stick. It will tend to hang a little.