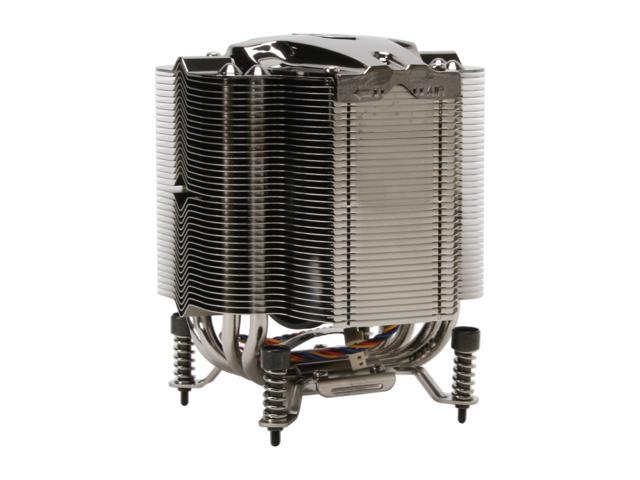 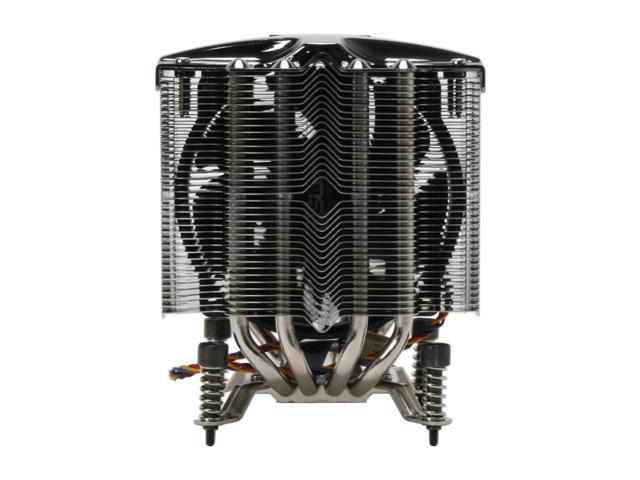 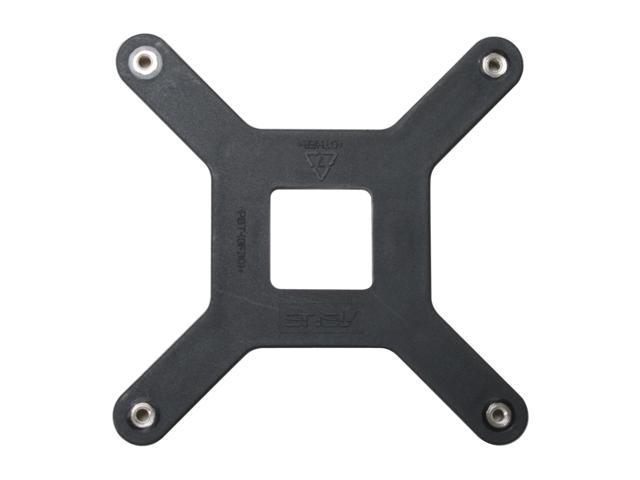 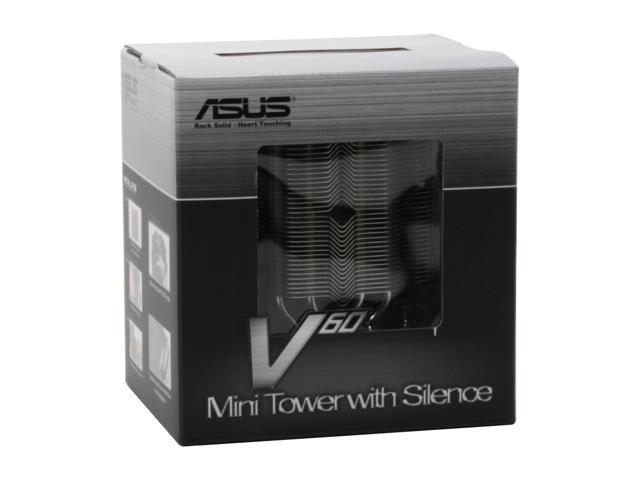 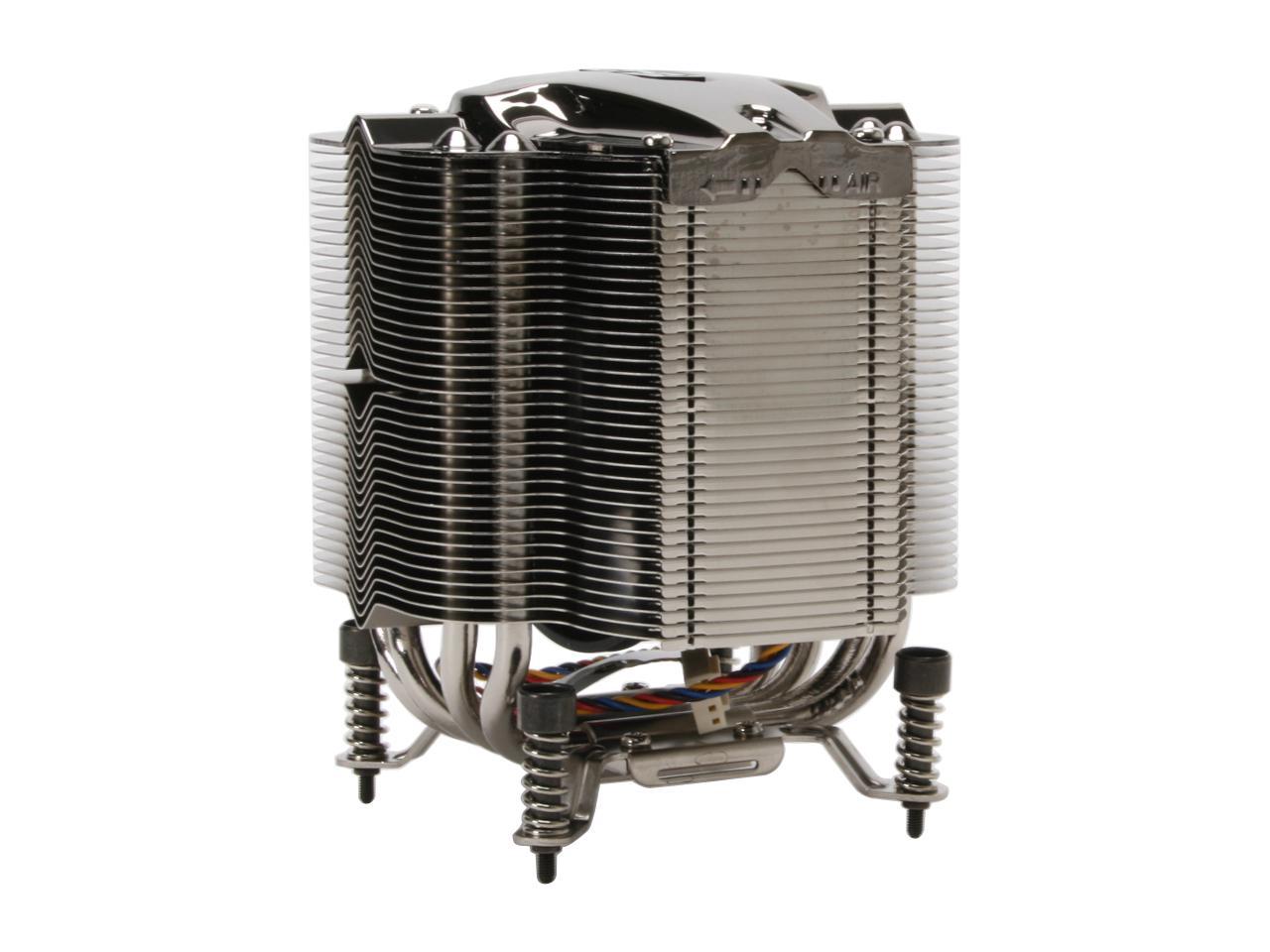 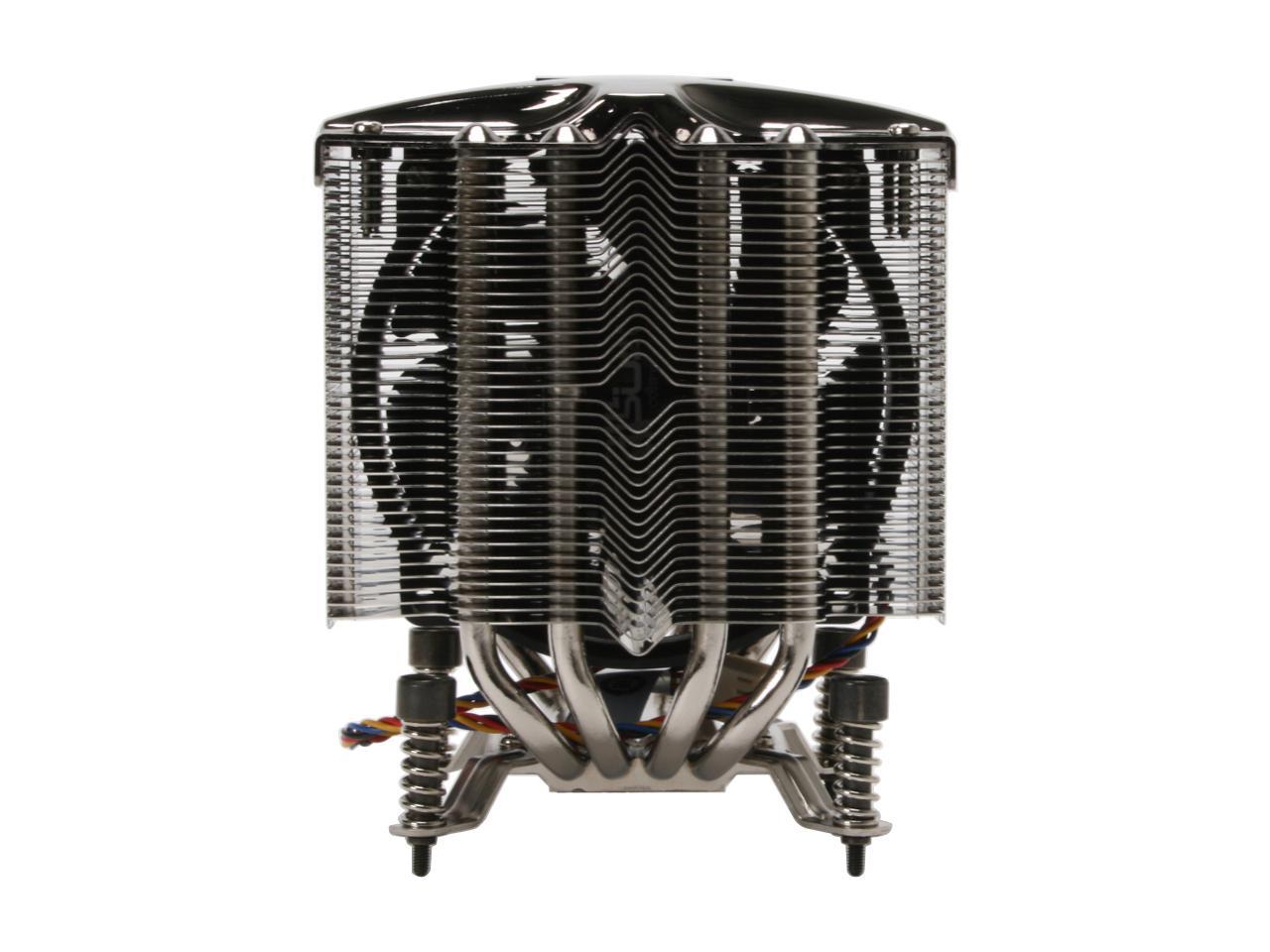 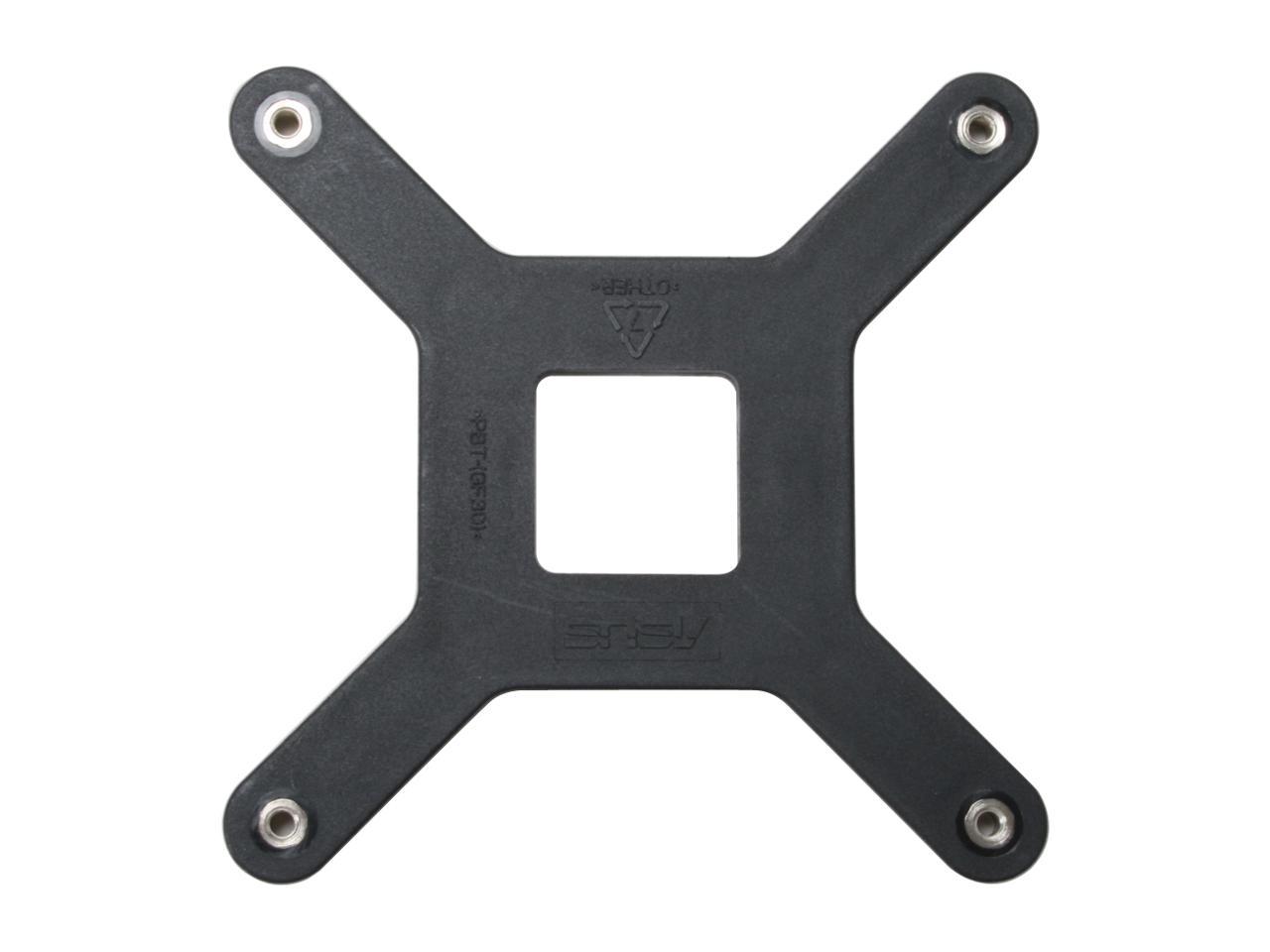 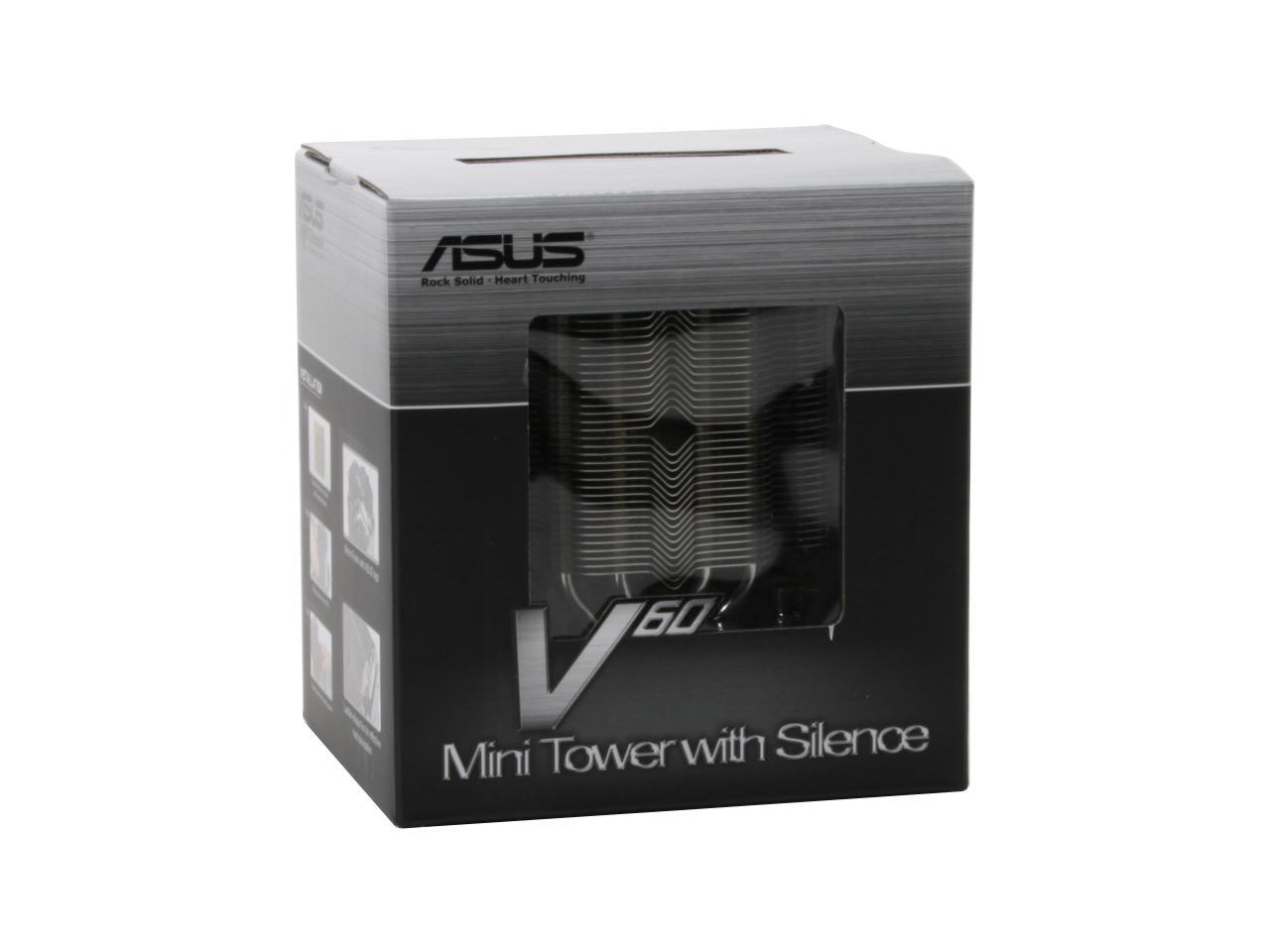 (137) Write a Review
OUT OF STOCK.
Overview
Specs
Reviews
The V-60 by Asus is a compact cooler that provides improved cooling for Intel-based computers. Four high-performance, sealed copper heat pipes direct heat away from the CPU and towards 36 cooling fins. Air is drawn over these aluminum fins by a quiet 92mm Sunon Vapo Bearing fan rated at 2300 RPM and moving 36.5CFM of air. The fan is buried in the core of the heatsink allowing it to effectively cool both sides simultaneously while the surrounding structure masks the sound of the fan.
The V-60 supports LGA775 chips including the Intel Core 2 Extreme and Intel Core 2 Quad processors along with Pentium and Celeron chips that also use the LGA775 socket. The fan operates at a subtle 16 decibels, and included PWM functionality lets the fan operate slower – and quieter – at off-peak times while being able to increase speed when thermal need requires extra cooling. Components around the CPU are cooled by airflow to ensure stable computing.

Learn more about the ASUS V-60

Cons: None as far as I'm concerned.

Pros: WOW, is all I can say this CPU cooler keeps my quad core at 28-30 C and makes no noise at all this is worth the money and then some

Cons: None so far, maybe for some might be too big to fit, but I doubt it

Overall Review: I am glad I went with this instead of the intel heat sink/fan it comes with

Cons: None. (If you have a small case might be a problem. Just measure before you order)

Pros: I recently review this cooler with the title "Personal Waste", my review was premature and I would like to do a follow up review as well get into more details. My motherboard, a Gigabyte GA-EP45-DS3L, comes with a program that allows you to control your CPU Power Fan's speed. I used this program to max the fan to it's highest and I watched my temperatures drop. My idle temperature is now around 32-34C, a good deal lower than my previous idle temp at 39C. This is also with a non-stock fan.** The V-60's fan bracket is made of plastic, some of you may think this is bad because it won't be able to support the heatsink, wrong. The reason that the bracket is plastic is because the bracket can come in contact with the motherboard tray and your motherboard, the plastic prevents short circuiting your motherboard. Plus, the plastic is strong enough to hold this heatsink. This cooler, with the right software, is adequate for any moderate system.

Cons: The fin's screw holes are easily stripped when removing the cap off of the cooler.

Pros: looks great,i got my e8500 from 3.16 to 4ghz under this thing and it idles at 36 and only goes to 53 degrees under load man this thing is so shiny almost a mirror reflection and such a sweet price what a steal

Overall Review: so good i just got another one for my new build/ another plus is the backplate this is a must never go with the snapin type u r a fool if u get that type trust me u will lv this cpu cooler

Pros: Nice solid mounting- back frame and screw hardware-fits great on gigabyte GA-EP45-UDP-3, works fine on Q6600 (not over clocked). No clearance issues whatsoever. Quality product- is somewhat large. Not going to fit in any small case for sure. Quiet cpu fan.

Cons: Some state you have to take the motherboard out to mount. Not so here. Mine is on a slide out tray- just removed the tray, slid the back plate under MB and used a wooden Barb-B-Q skewer to hold in place till I was able to start mounting screws. I did clean off oem thermo paste and install artic silver. Took less than 5 min.

Overall Review: I'm using this in a Lian PC-61 case with 4 case fans. Cooler is always cold to luke warm to the touch. monitoring CPU temps confim findings. CPU cooler fan running @ 1560rpm . I would not be afraid to overclock CPU with this cooler in place.

Pros: Nice mounting, it screws in instead of the Intel push pin design. Not too big, fits with cover on. Before installing, I video rendered some HD footage(gets really hott when doing so) then I rendered the same footage with the new ASUS V-60 heat sink and fan. Went from 62c to 47c and my idle went from 47c to 34c. Really pleased with this product.

Cons: Had to remove my fan for my heatsink to North Bridge but not really a CON due to the new fan blows right across it.