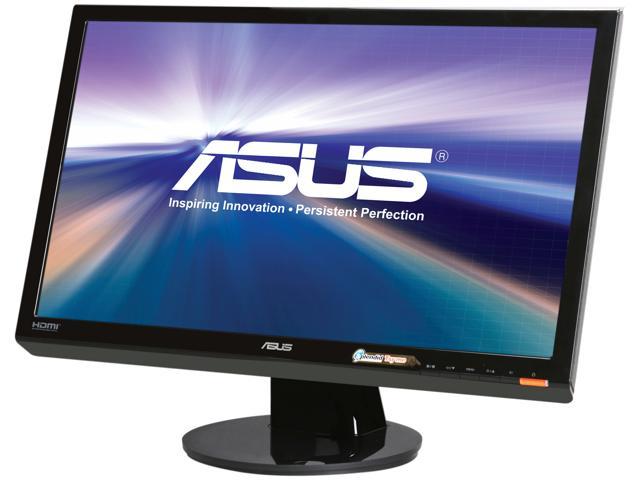 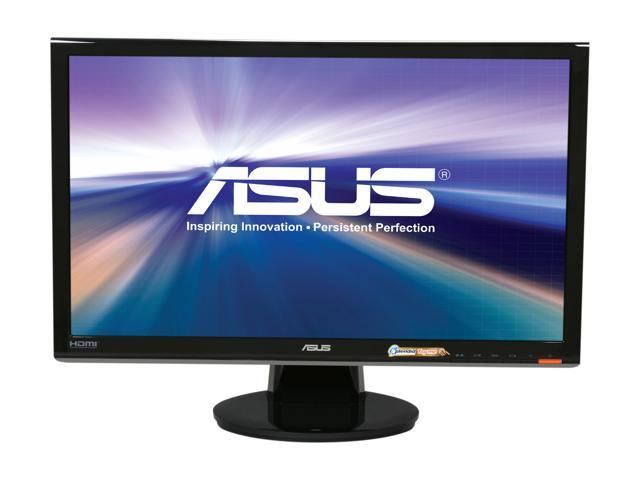 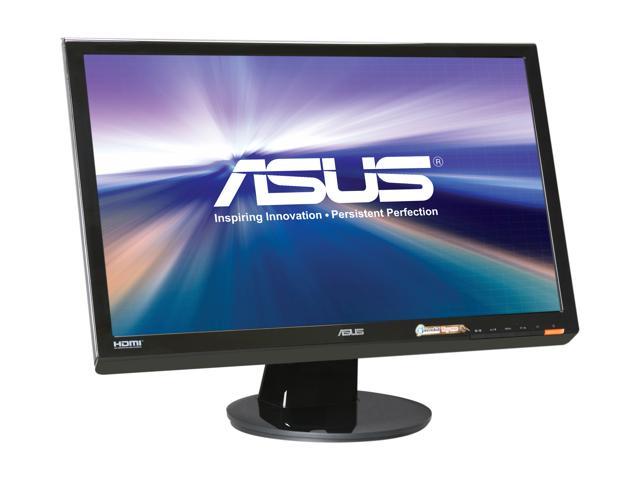 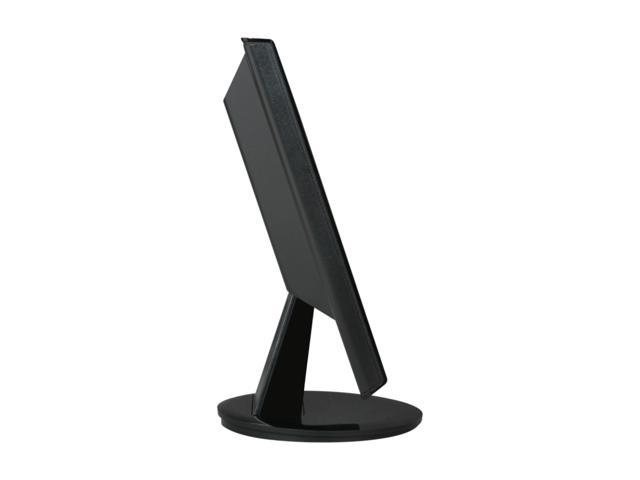 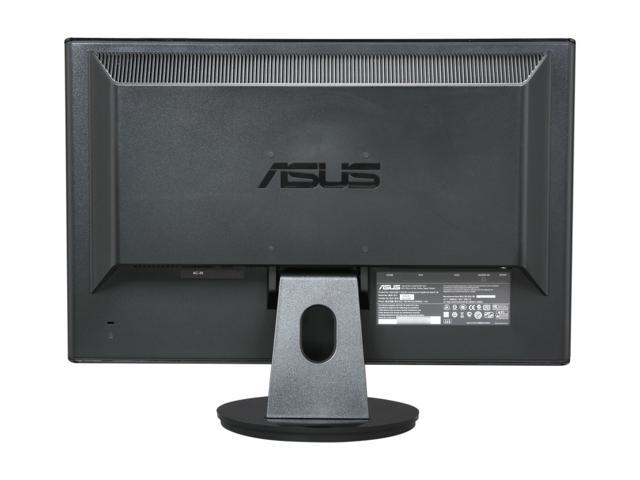 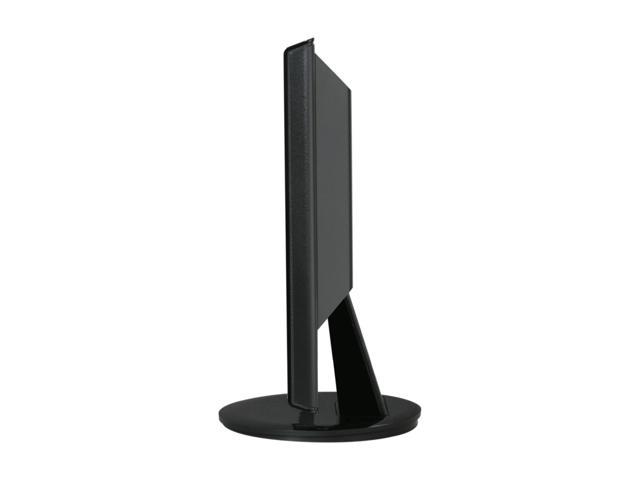 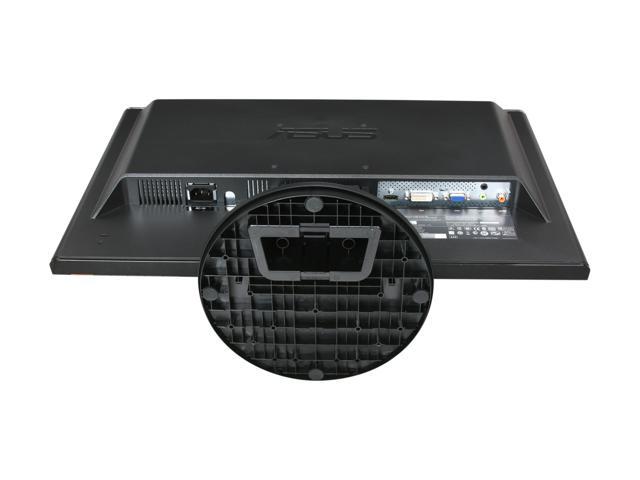 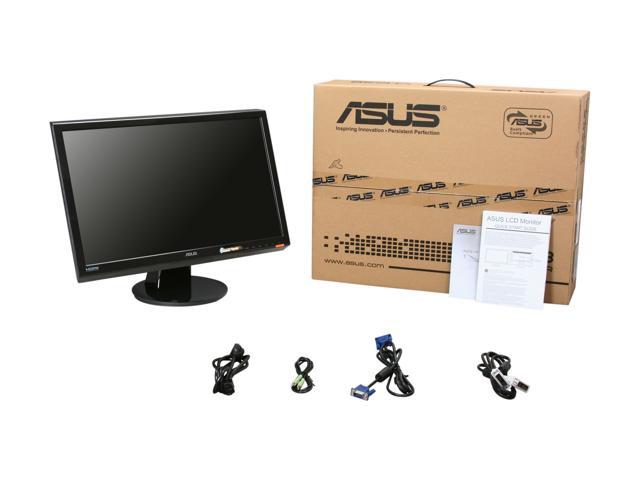 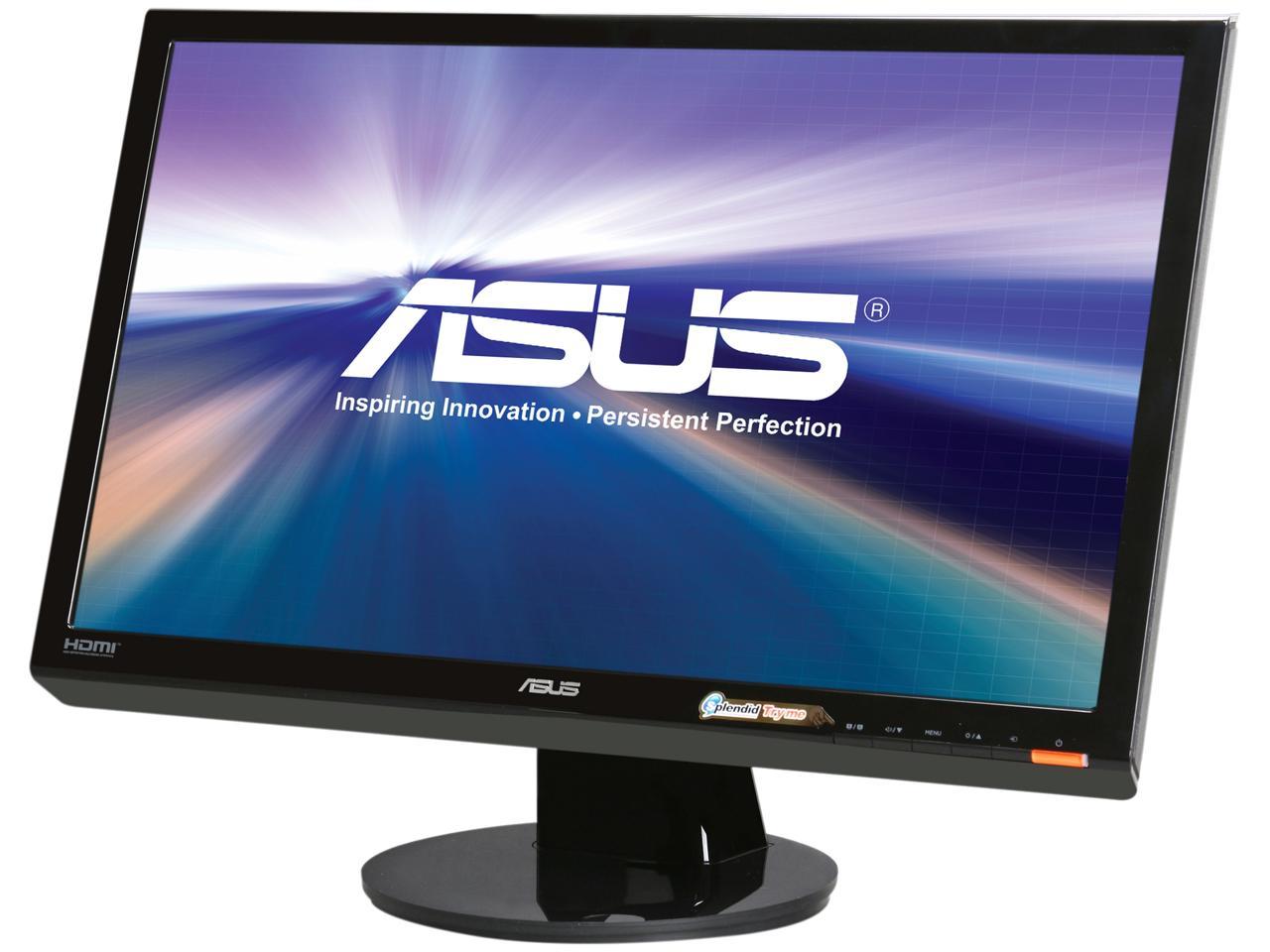 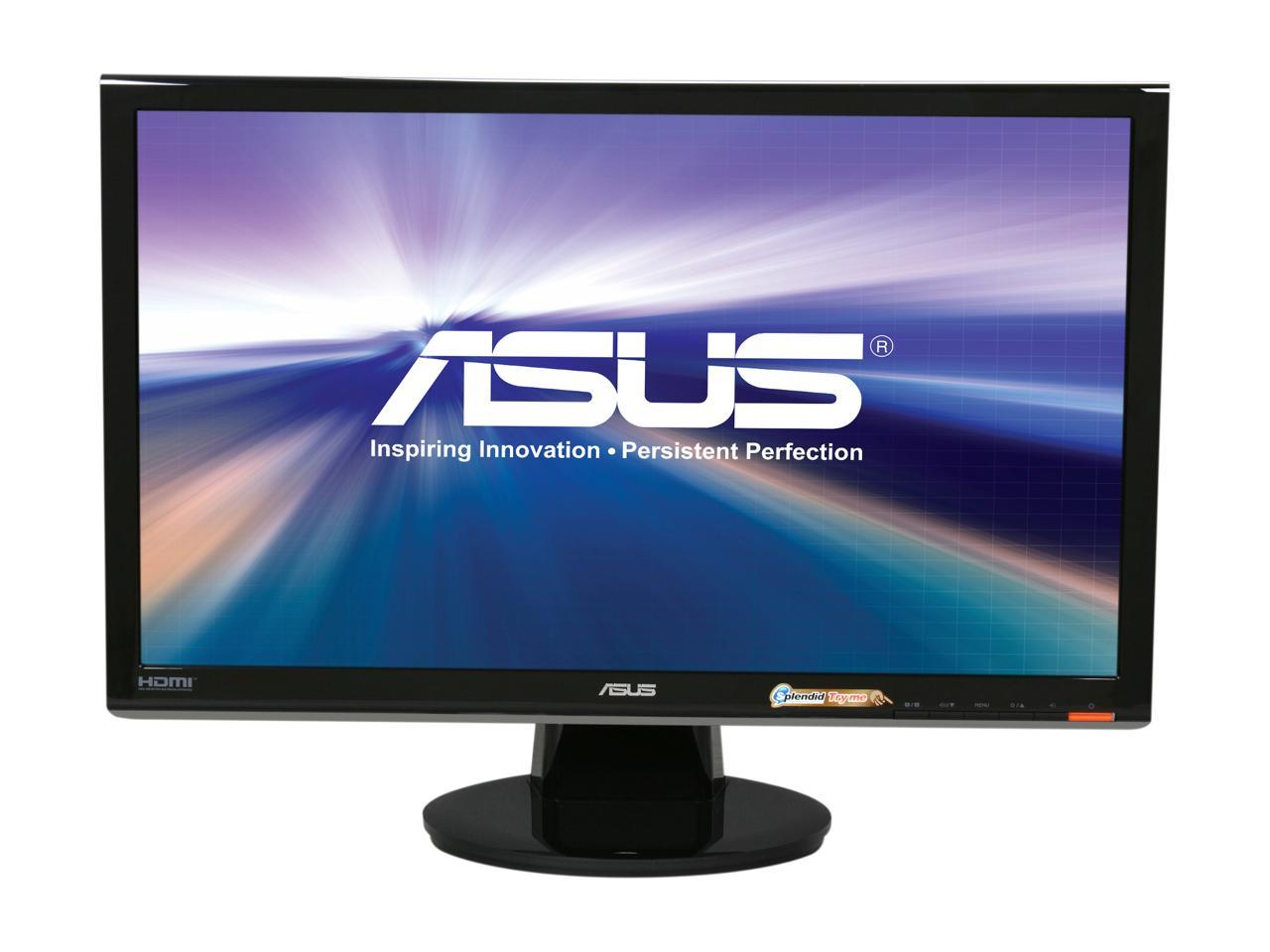 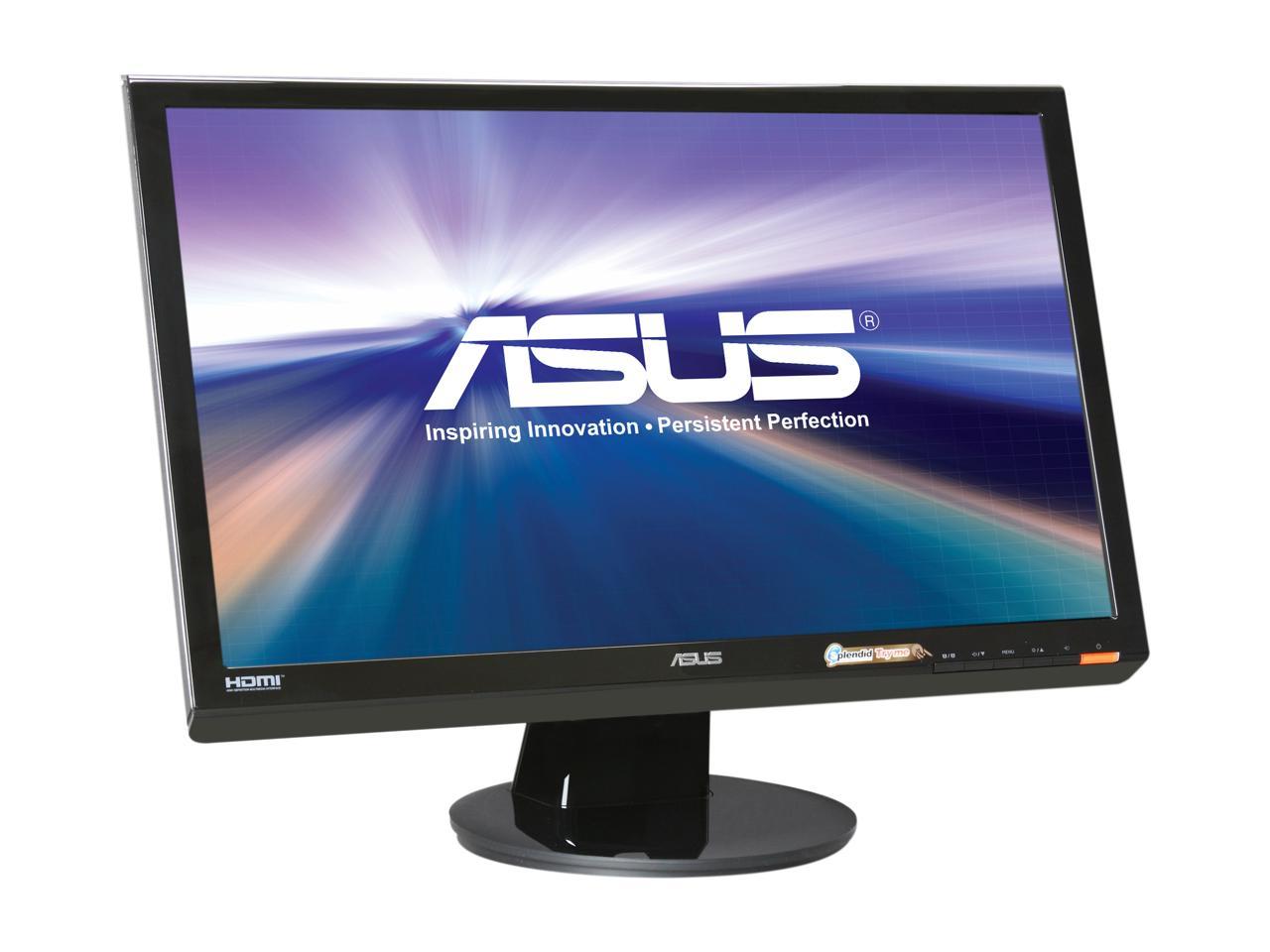 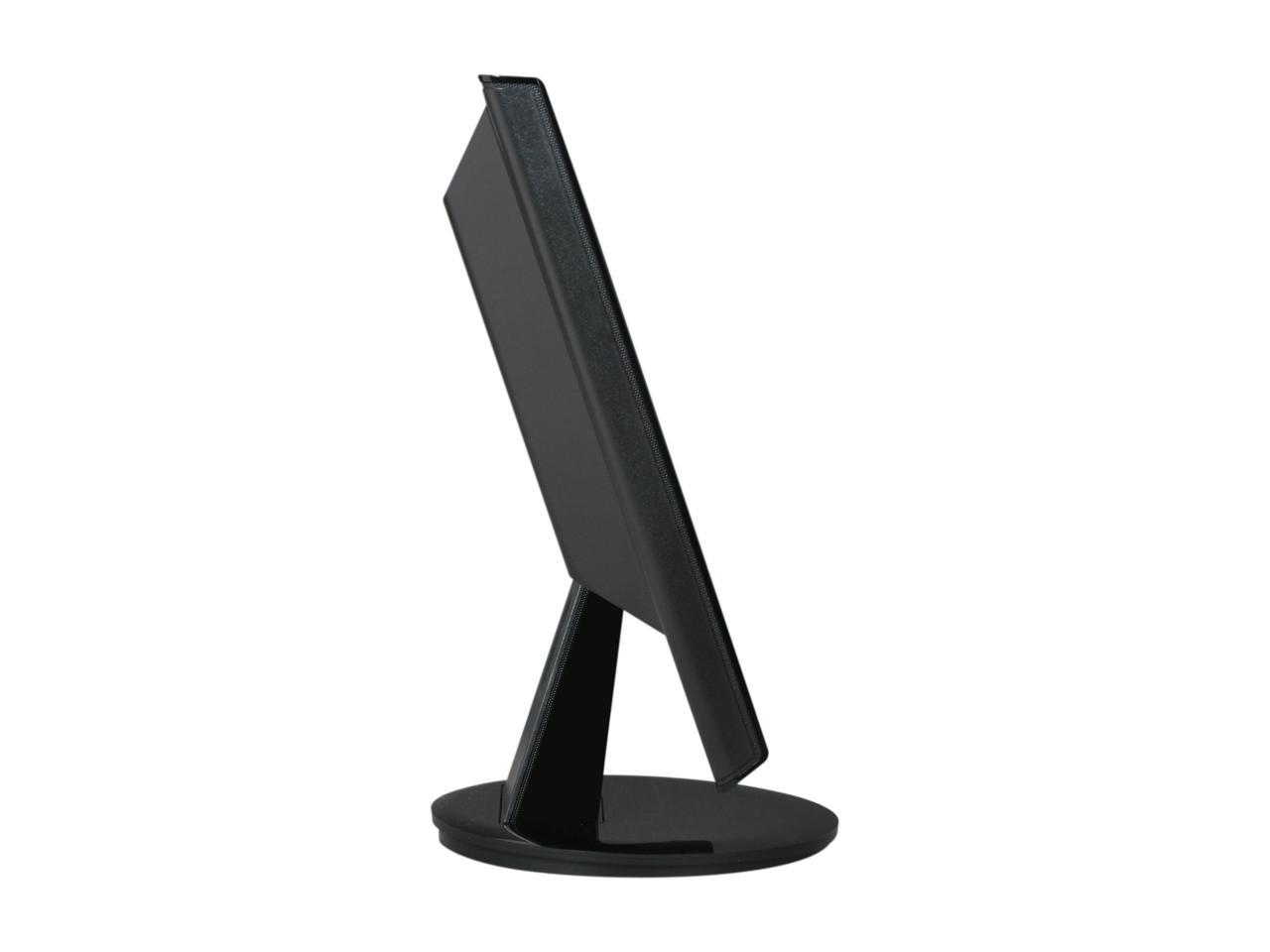 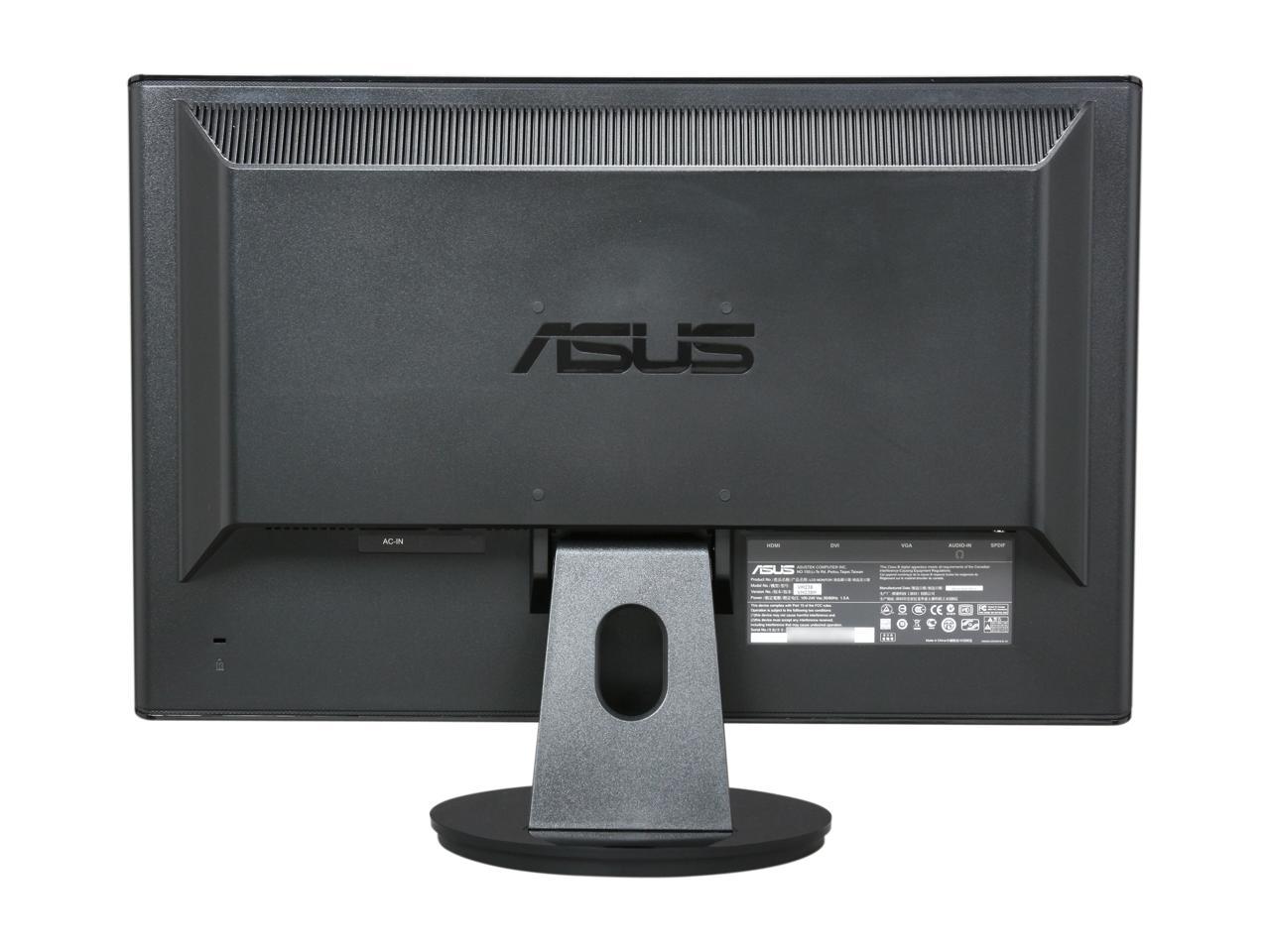 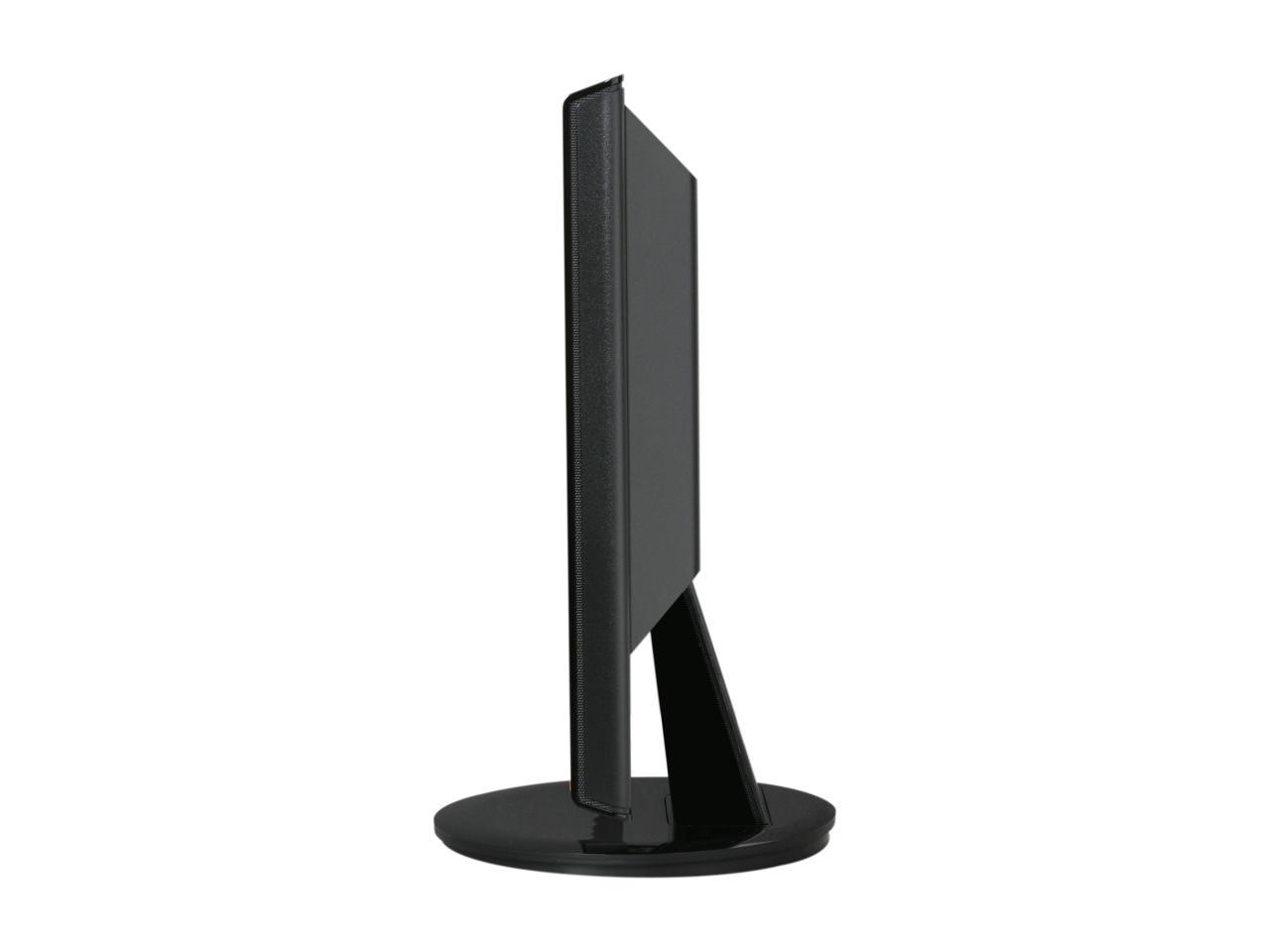 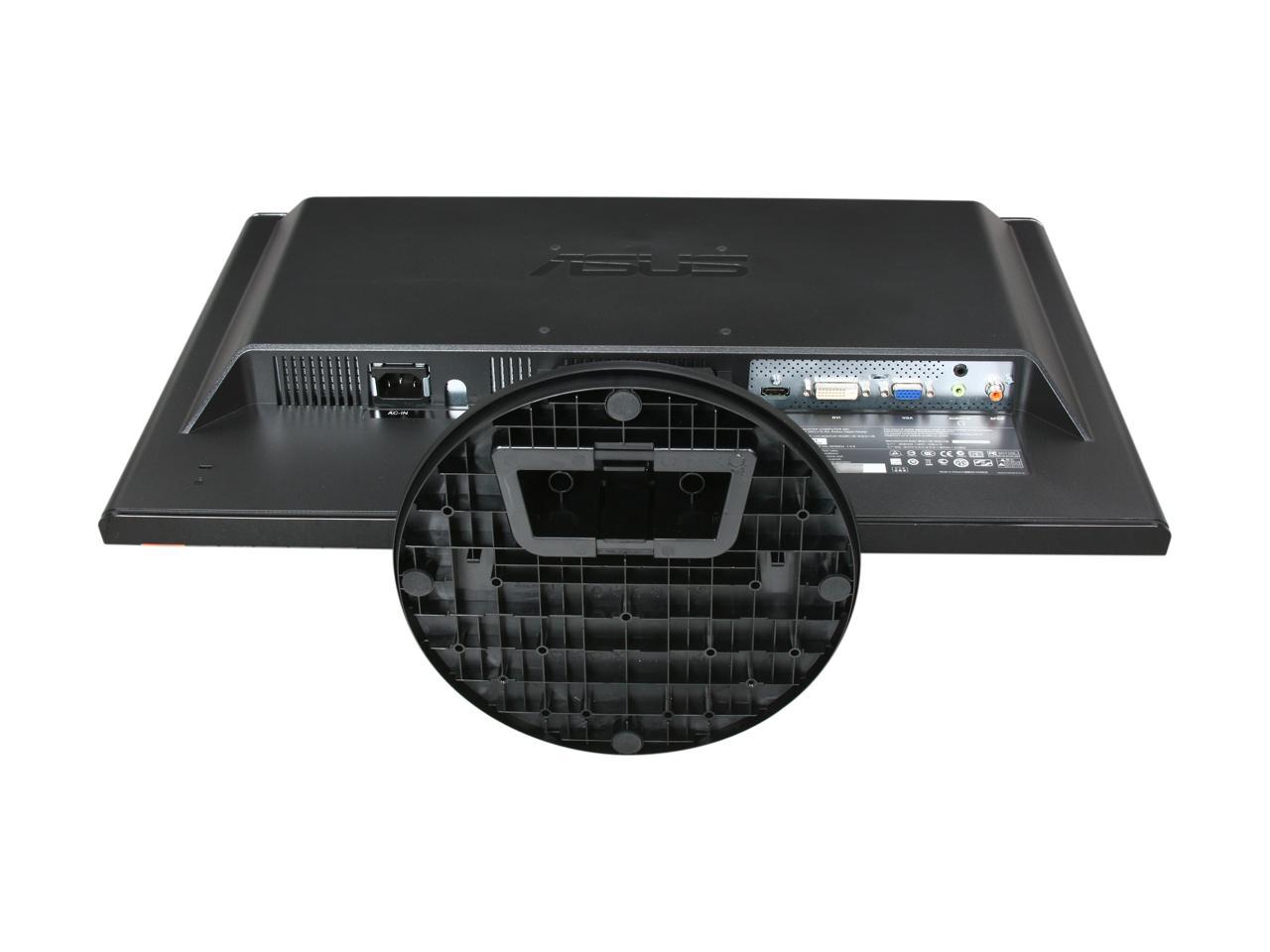 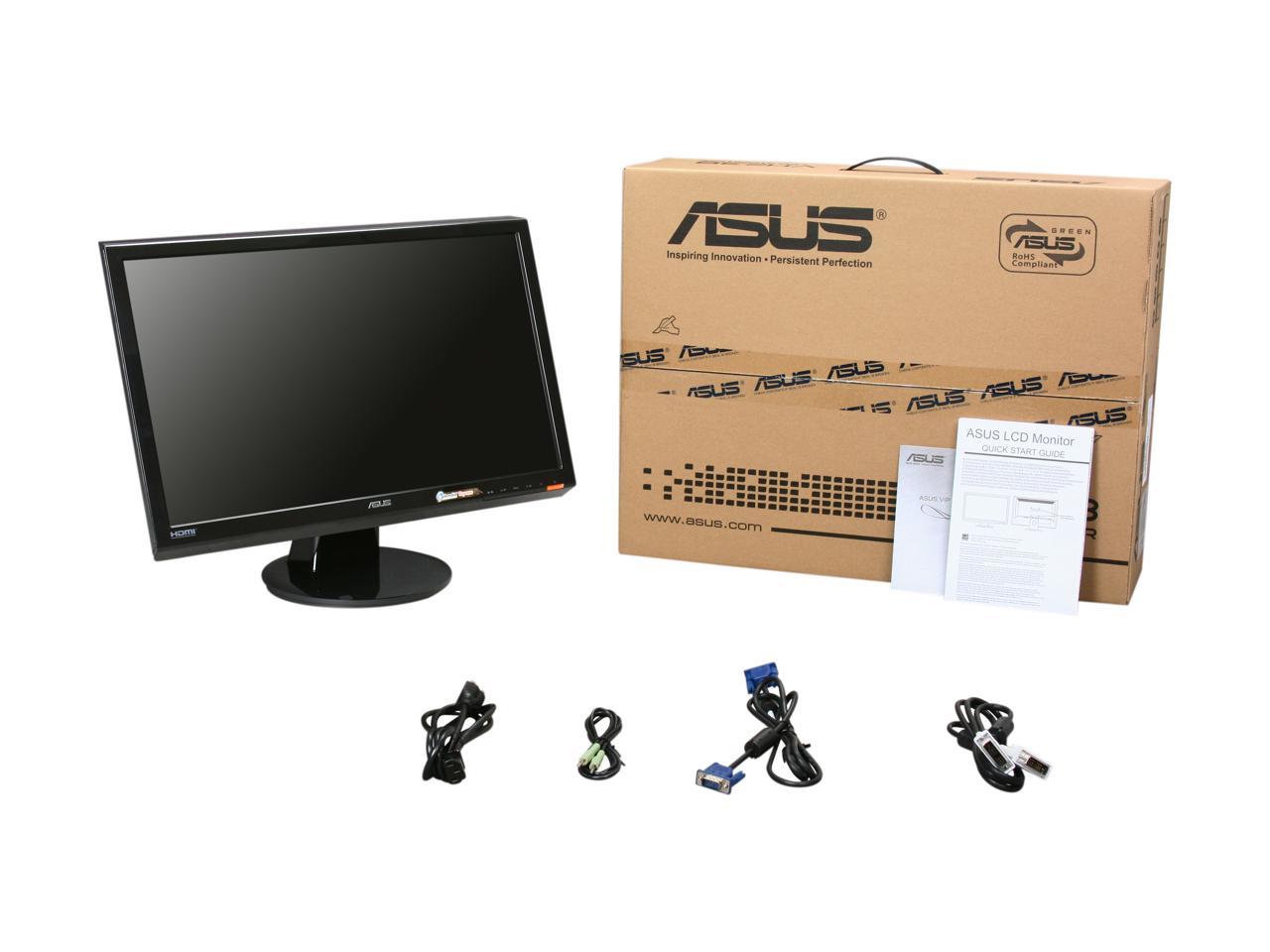 (1,144) Write a Review
OUT OF STOCK.
Overview
Specs
Reviews

The VH238H by ASUS mixes visual excitement with modern sophistication. Powered by LED backlight technology, the VH238H delivers sharp, true-to-life images with 2ms speedy response time and ASUS Smart Contrast Ratio that dynamically adjusts the display’s contrast ratio according to the image content, up to an astonishing 50,000,000:1. Full HD 1080p (1920x1080) support and HDMI port bring you into a spectacular world of colors, no matter what you are watching, thanks to ASUS exclusive Splendid Video Intelligence Technology.

Smart View Technology can adjust color parameters to deliver the same image quality and colors with straight viewing. For ease of use, the VH238H features convenient key controls for functional set-up in the multi-language OSD, and integrates hidden stereo speakers and cable manager for a clean look. Built with green in mind, the ASUS VH238H still brings you stunning visual experience in a contemporary package.

Learn more about the ASUS VH238H

Pros: found they do have instructions on how to remove the mount stem it just not in English haveto go by the pictures

1 out of 1 people found this review helpful. Did you?
Sean M.
Ownership: 1 month to 1 year

Cons: Shows Asus logo every time I turn it on - this is fairly annoying. The stand only adjusts vertical angle of monitor - you can't move the monitor up, down, or swivel it side to side without picking it up. No handle in the back to lift it. I have the brightness at 0 and I still think its pretty bright (I have sensitive eyes)

Overall Review: I bought this monitor because it had the best pixel density of the other monitors I was looking at I am using this monitor with a DVI cable on a Dell desktop that is running Ubuntu Linux

Did you find this review helpful?
Jesse B.
Ownership: 1 day to 1 week

Pros: Works perfect. Got it open box for $120 off the list price. Came with original box and all accessories. Great quality, great color.

Overall Review: 23" good quality monitor for $81. Can't beat that deal. Newegg is awesome. Open box is a bit of a risk, but past experience tells me that Newegg will take good care of you even if something is wrong with the open box item.

Pros: Where to start. I bought this to replace a 17" CFT. What a DEAL! Quite possibly the best $200 I've ever spent on a computer component. 1. The look and color of this display is amazing. Very even lighting. 2. Native 1920x1080 resolution. 1080p looks amazing on this display! 3. 50,000,000:1 contrast ratio (asus smart contrast ratio, but still!) Night scenes in movies and in games like LOTRO absolutley blow my mind now. It's like having an upgraded graphics card. 4. Super efficient LED backlighting!!! 5. 2ms g2g response time! Gamer's and movie watcher's will understand this. Content is displayed soooo smoothly! 6. It's a VH series!! So you know it has the EPEAT Gold rating. That means it should (theoretically) be built to last longer, Highly energy efficient, and is mercury free! GREEEEN! lol. 7. Great viewing angles for having a 170/160 rating! 8. VESA mounting capability. 9. 75hz refresh capability! (although this is not supported for 1080).

Cons: Although I find the stand extremely sturdy, support-wise. It does let the monitor wobble a bit when the desk is bumped. Probably unavoidable as I'm going from a monitor that weighed about 40 pounds to one that weighs about 10, lol. Although this was not a con for me, I figured some people may look at it as one so I thought I'd include it. Because of the built in hidden wire organizer and 2 watt speakers, the monitor is not as thin as some of the other LED backlit displays out there. I knew this going in and couldn't care less. It's still reall thin. I guess it's not an IPS? Lol. Of course it's $200 and 23" so get real! :D

Overall Review: A very pleasant suprise what that the speakers that are built in we quite sufficient for day to day use while I was waiting for my Klipsch Promedia setup to come in. Another I couldn't fit in the pros was the fact this monitor Not only has a DVI hookup but also an HDMI and VGA hookup! Talk about options! On top of that you can switch imputs with a push of one button! I freaking love this display. Sorry, lol.

Cons: -Input calibration time is slow, often as much as 5 seconds. -Maximum of 1920x1080 resolution for a 23" screen. -Stand doesn't hold the monitor tightly, allowing the screen to wobble a bit (can be fixed with a little ingenuity). -Monitor top is beveled towards the front instead of flat, possibly interfering with some webcam mounts. -Glossy piano-black finish easily shows fingerprints, smudges, and dust. -OSD buttons are difficult to press without support behind the screen and their order is a bit wonky, but not too hard to get used to. Orange power button is a bit of an anomaly. -No HDMI cable included. -Cables are fairly short. Power cord and audio cable are 5' (152.4 cm) each, tip to tip. VGA and DVI cables are 4' 10" (147.32 cm) each, tip to tip.

Overall Review: -Maximum refresh rate of 75Hz. -Known supported resolutions: 1920x1080 60Hz, 1280x1024 60~75Hz, 1152x864 60~75Hz, 1024x768 60~75Hz, 800x600 60~75Hz, 640x480 60~75Hz (there may be more). -Text is nice and sharp at native resolution with standard smoothing, but can lose some of its edge in lower resolutions or clear type smoothing. -Built-in speakers are decent for monitor speakers (high treble, low bass) and pass in a pinch. They are located inside the heat vent along the top-back area, just slightly muffling sound toward the front of the monitor (sounds normal from behind). -Blue LED: power on. -Orange LED: standby mode. -LED off: power off. -OSD is fairly explanatory, but probably could have done with a simplification. -Quick start guide covers 31 separate languages, but doesn't really say anything most people wouldn't already know. -Energy Star 5.0 compliant (energy consumption is low). -Personal quality rating: 9 out of 10 (4.5 eggs). I would definitely recommend this mo

Pros: It worked, eventually. The monitor did not turn and the power button light did not light up when plugged in. The computer recognized the monitor, however, so I just figured that the monitor was broken in some unfortunate, yet mysterious way.

Cons: It didn't work to start with. I did an RMA, then, just to satisfy my curiosity, I performed a search and found the key information that led me to how to get the monitor to work.

Pros: I first being the avid gamer i am i was inclined to get the Evo monitor (vh236h) which is the LCD Version of this same monitor, that is know for having extremely low input lag and being the monitor professional gamers prefer and is used on tournaments like Evolution and MLG events, then i found about this model (VH238H) this monitor is basically an updated version of the EVO monitor i even lag tested it my self, Dual Monitors laptop and took pictures with a digital camera and and most of the time i was getting 1-5ms peaking at 10ms so in case your wondering this monitor is awesome...

Cons: only 1 HMDI Port and the AUX port is not an output is input... that is kinda of a bummer...

Cons: -Stand doesnt tilt (most dont nowadays) -Speakers are weak (but who really uses them) -Interface and buttons are cumbersome, but you won't really need to use them much, if at all

Overall Review: A good LED monitor at a great price. Solid product and no dead pixels or performance woes. Minor inconveniences at best. Would recommend.