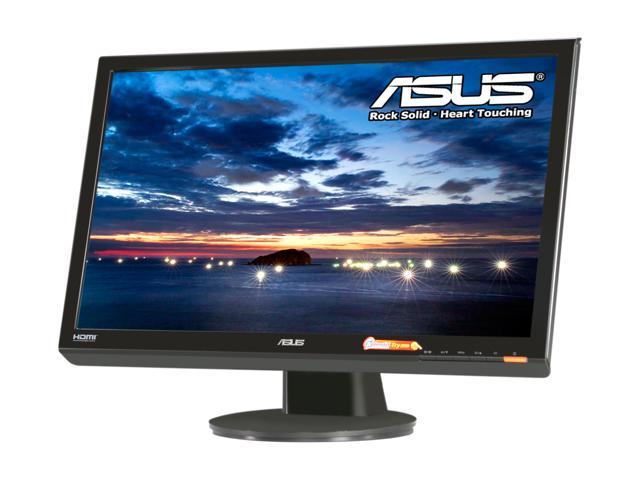 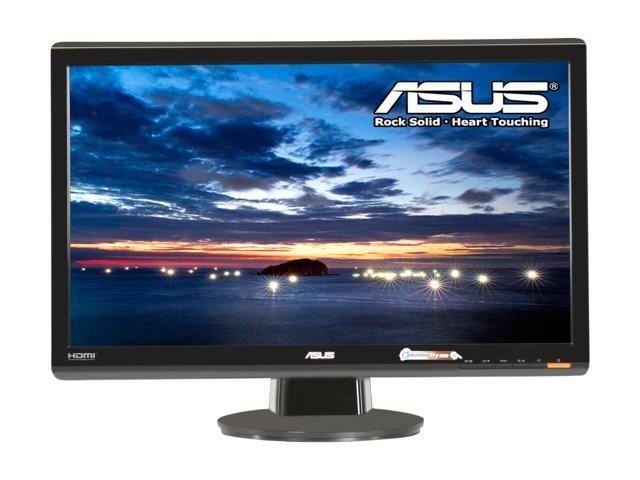 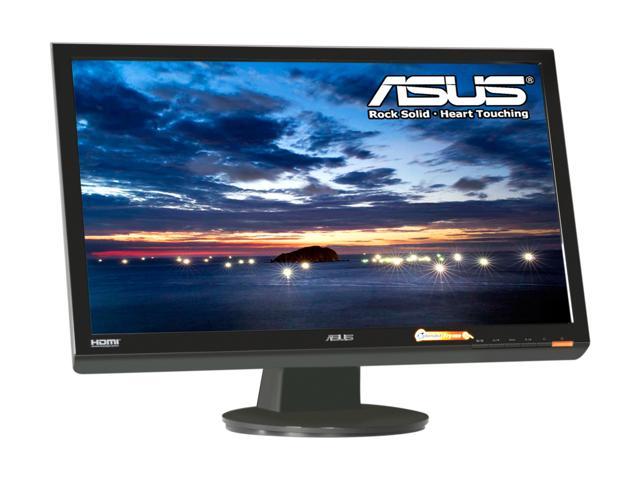 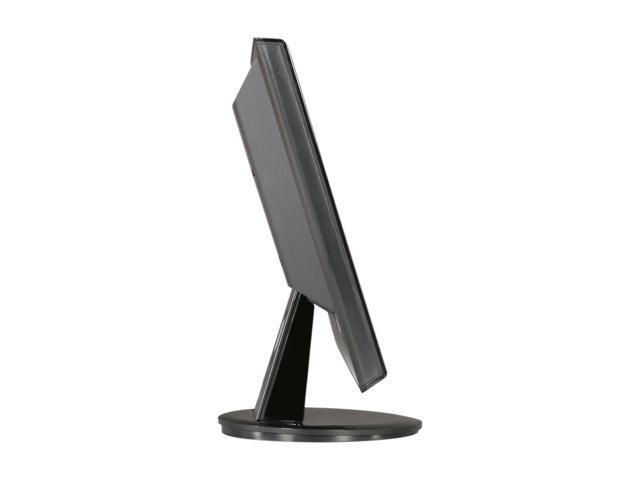 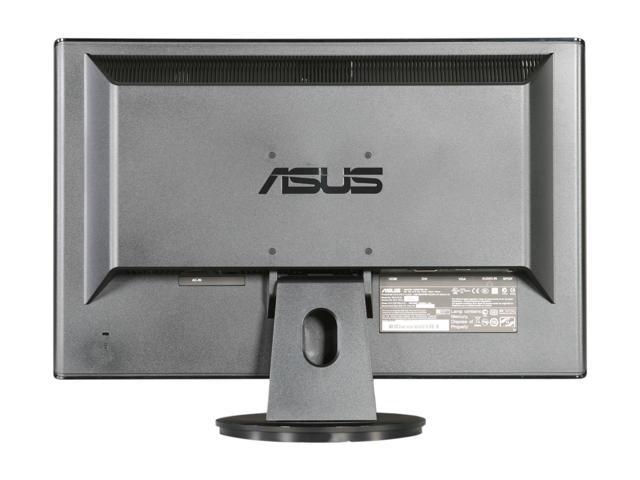 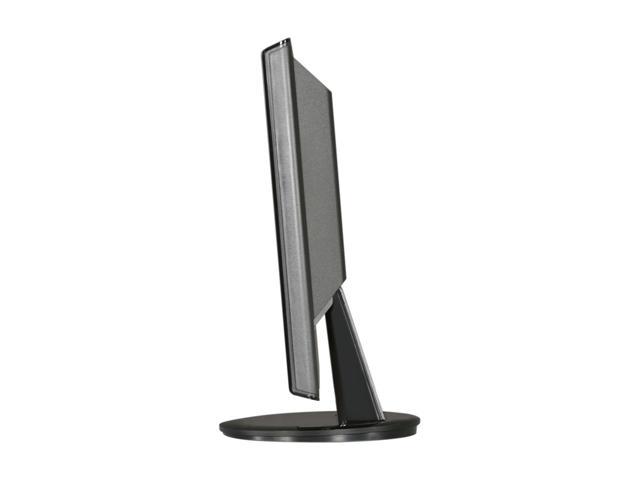 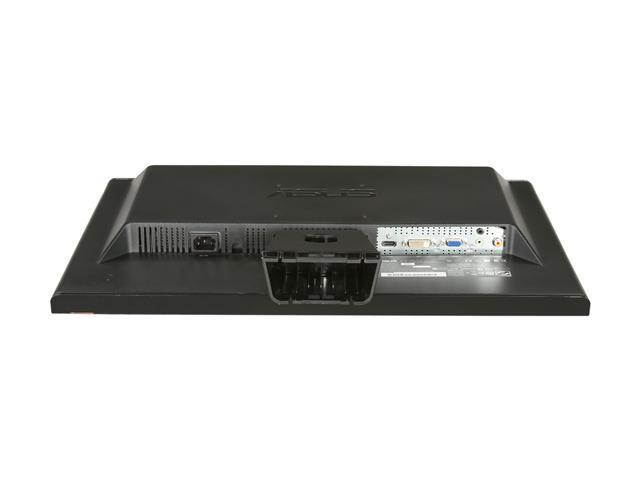 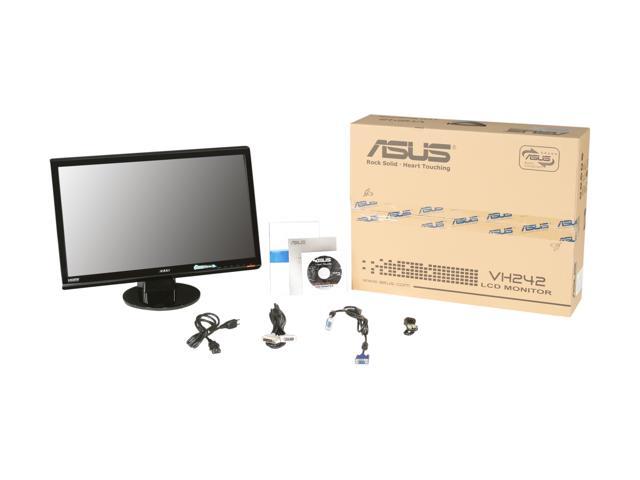 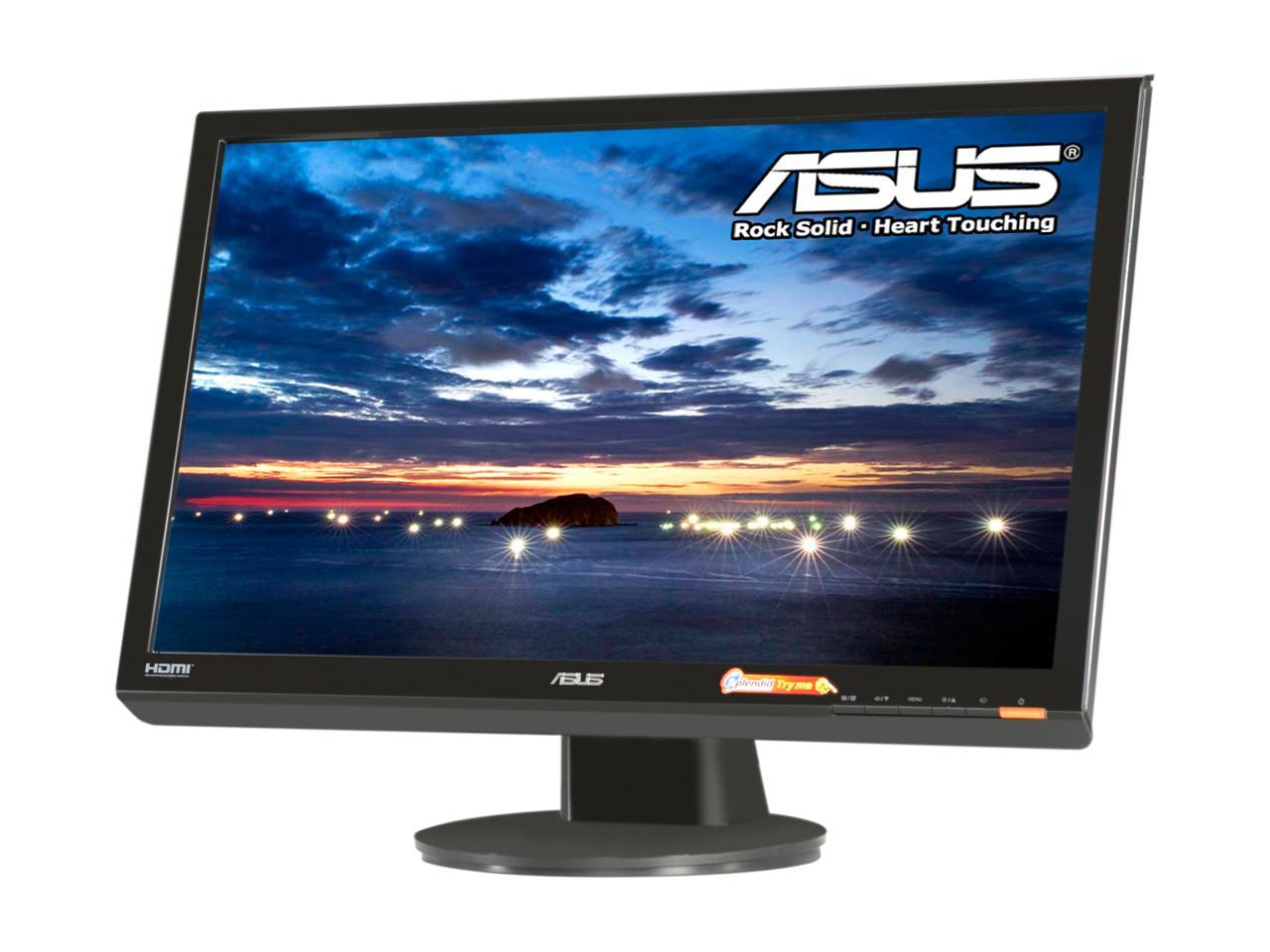 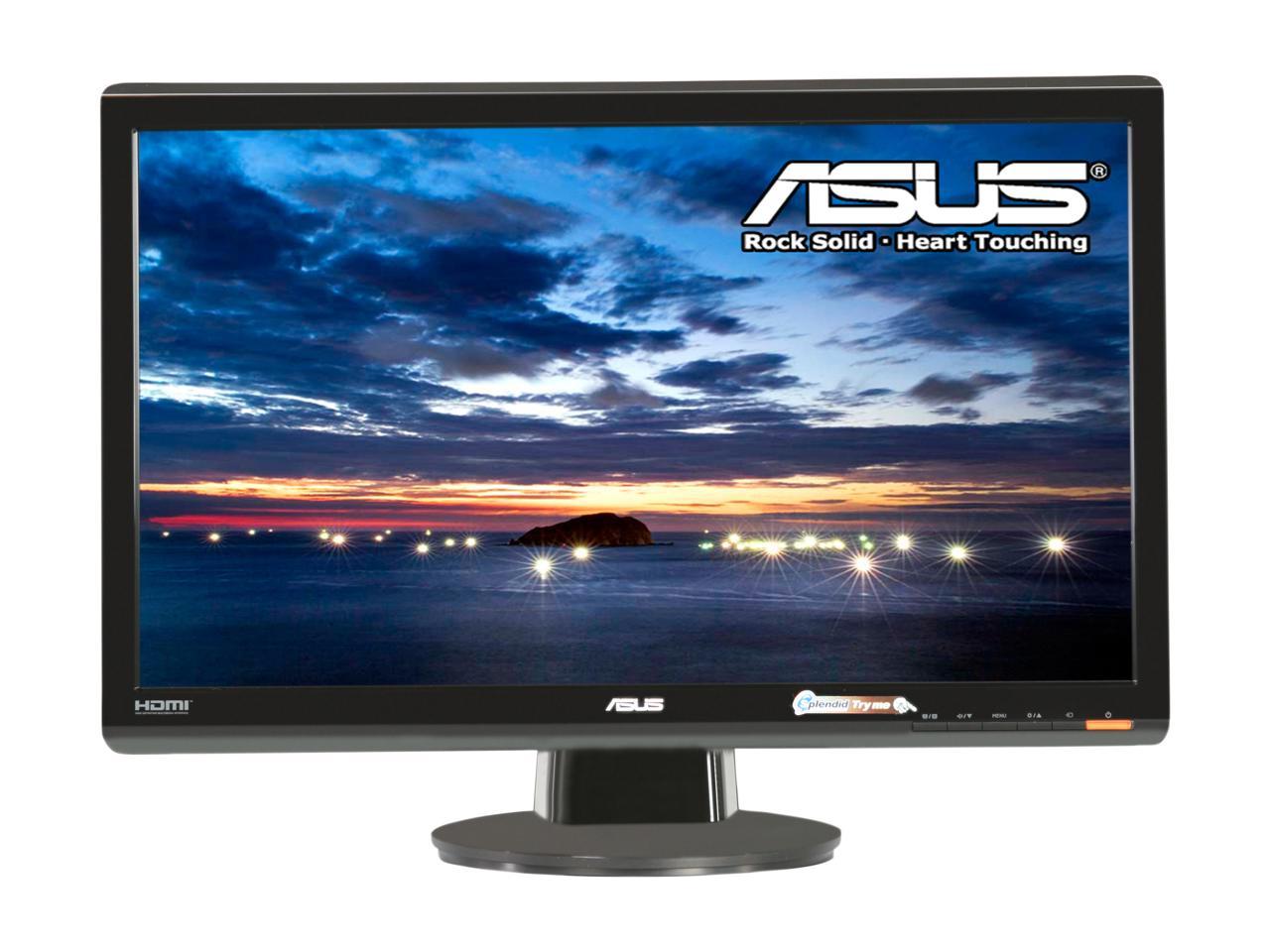 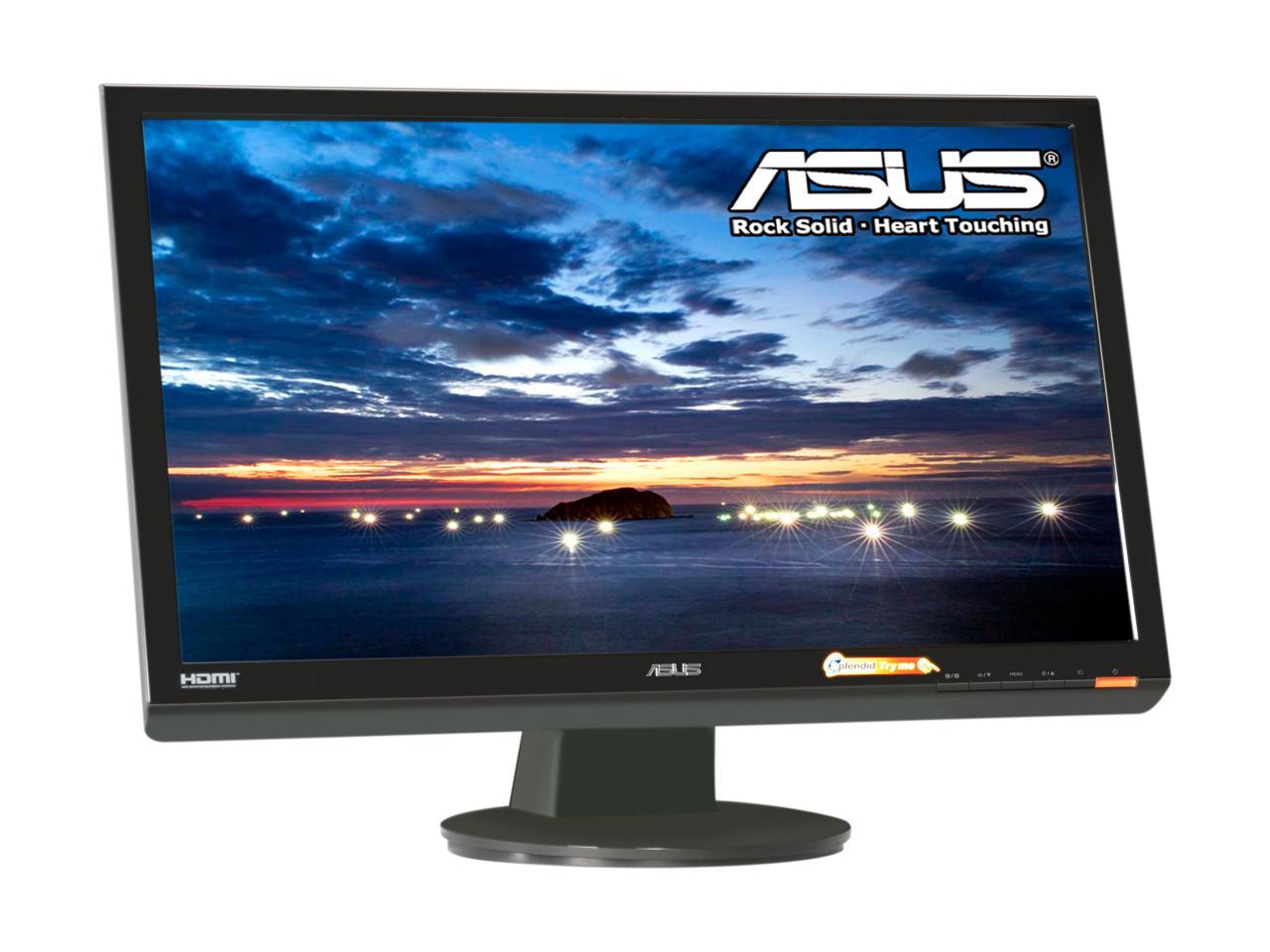 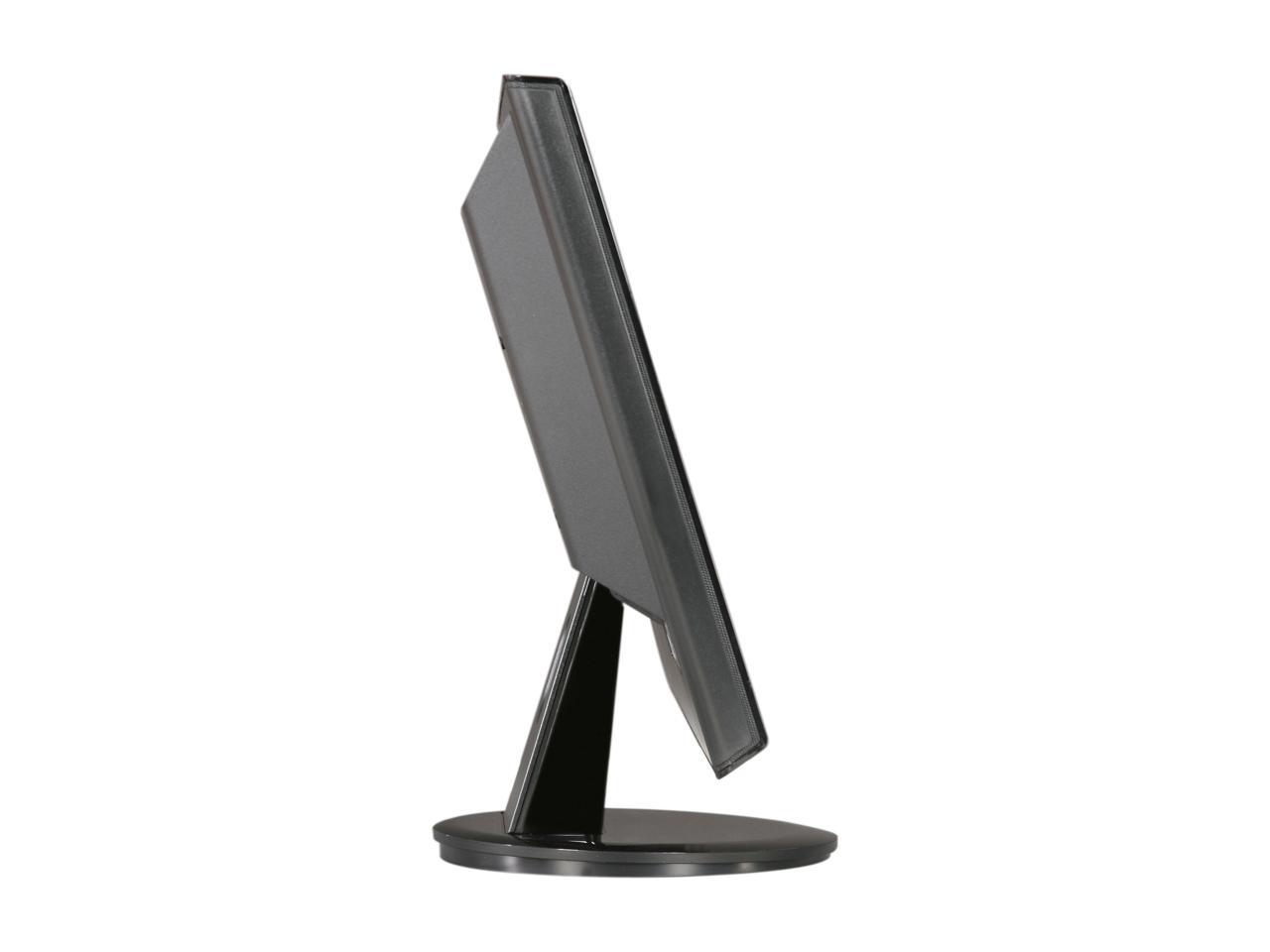 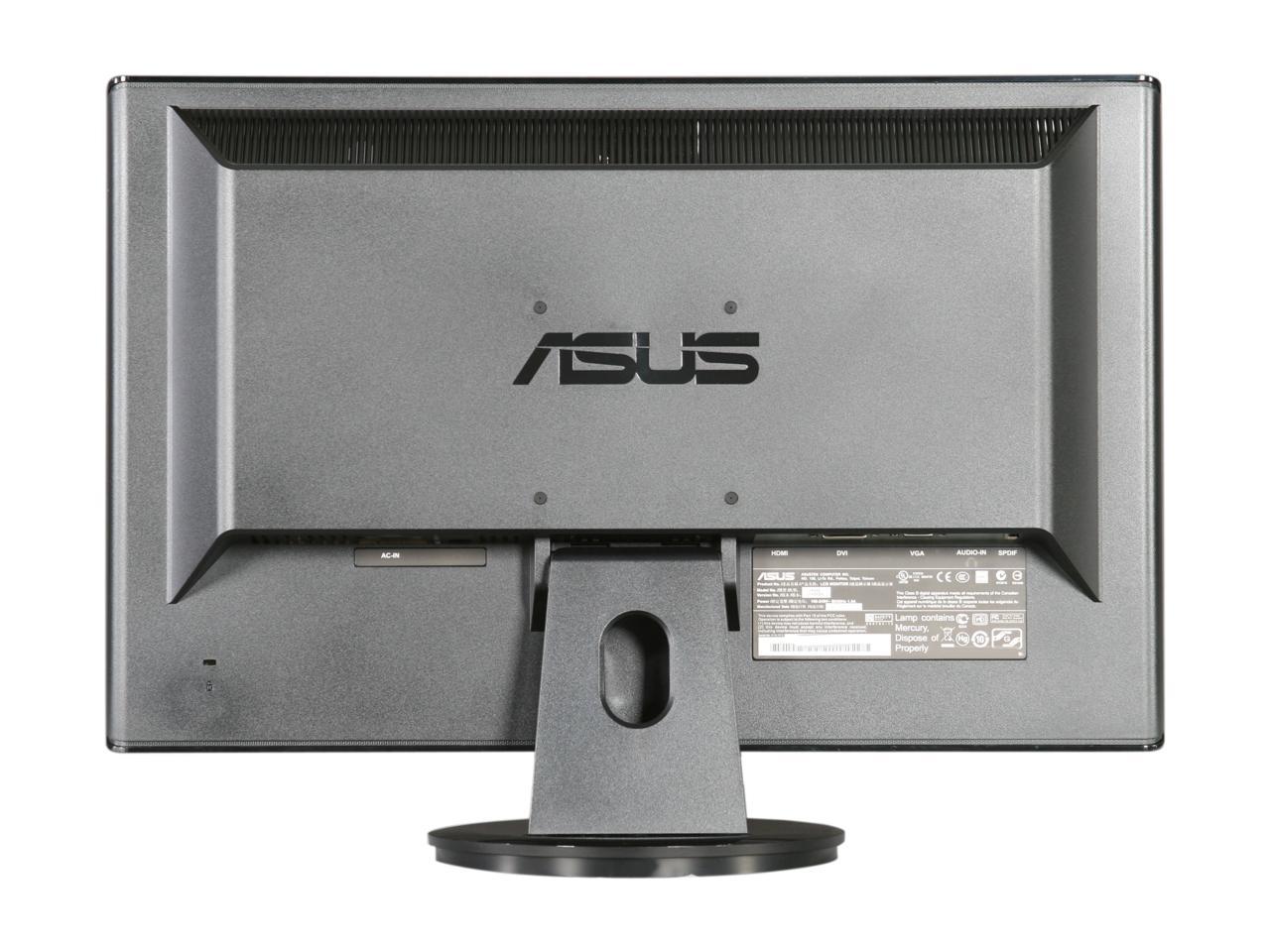 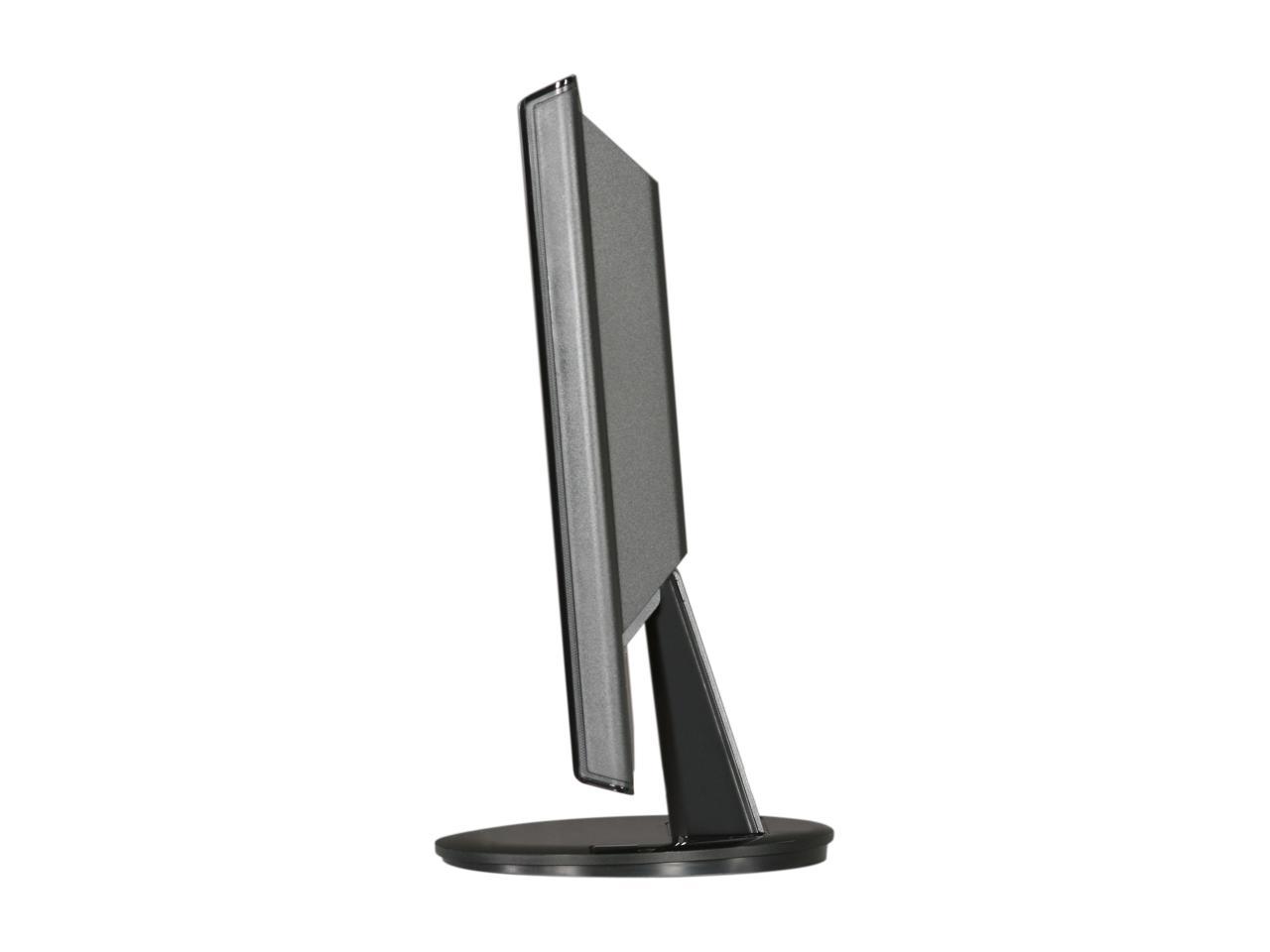 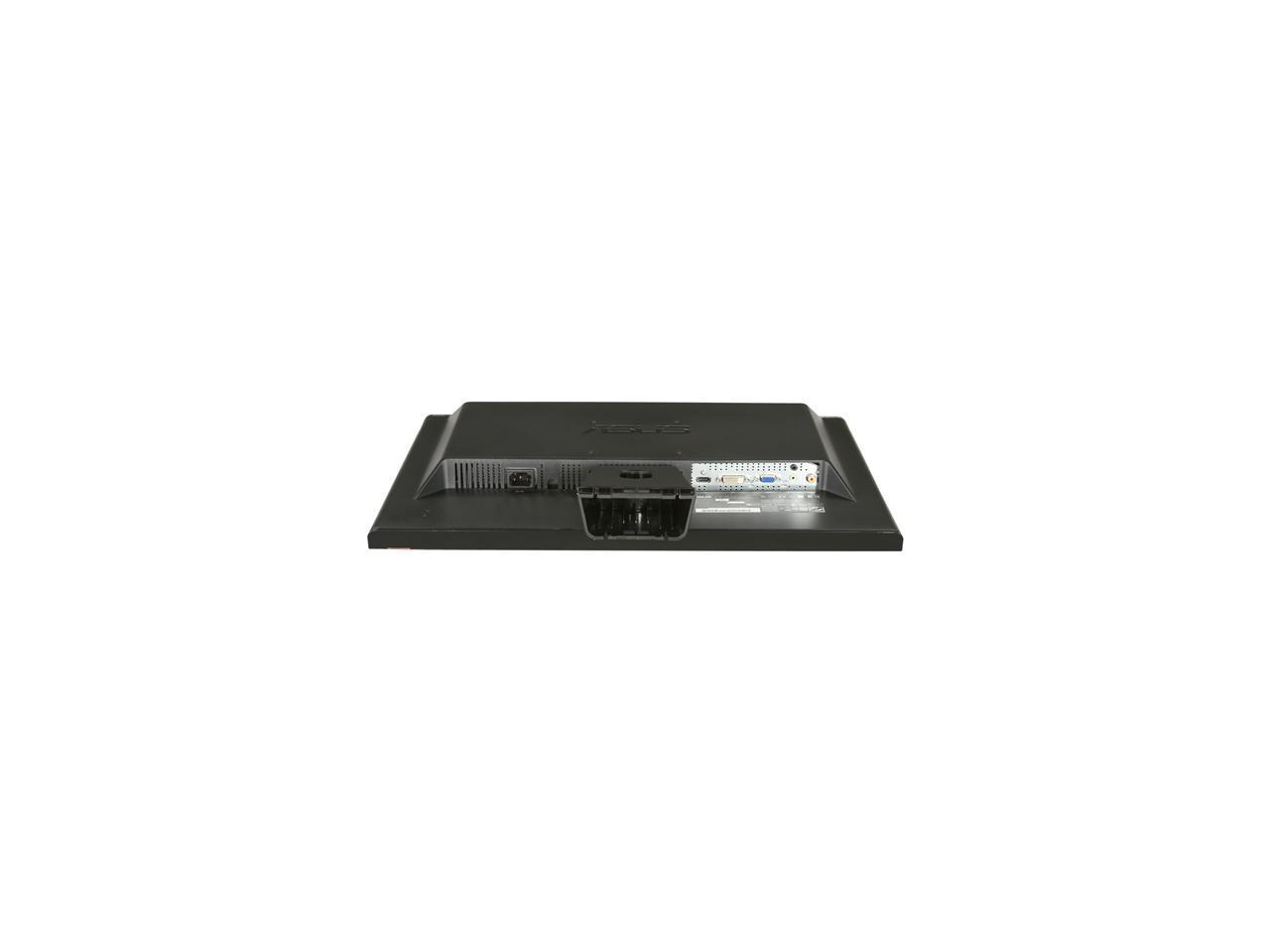 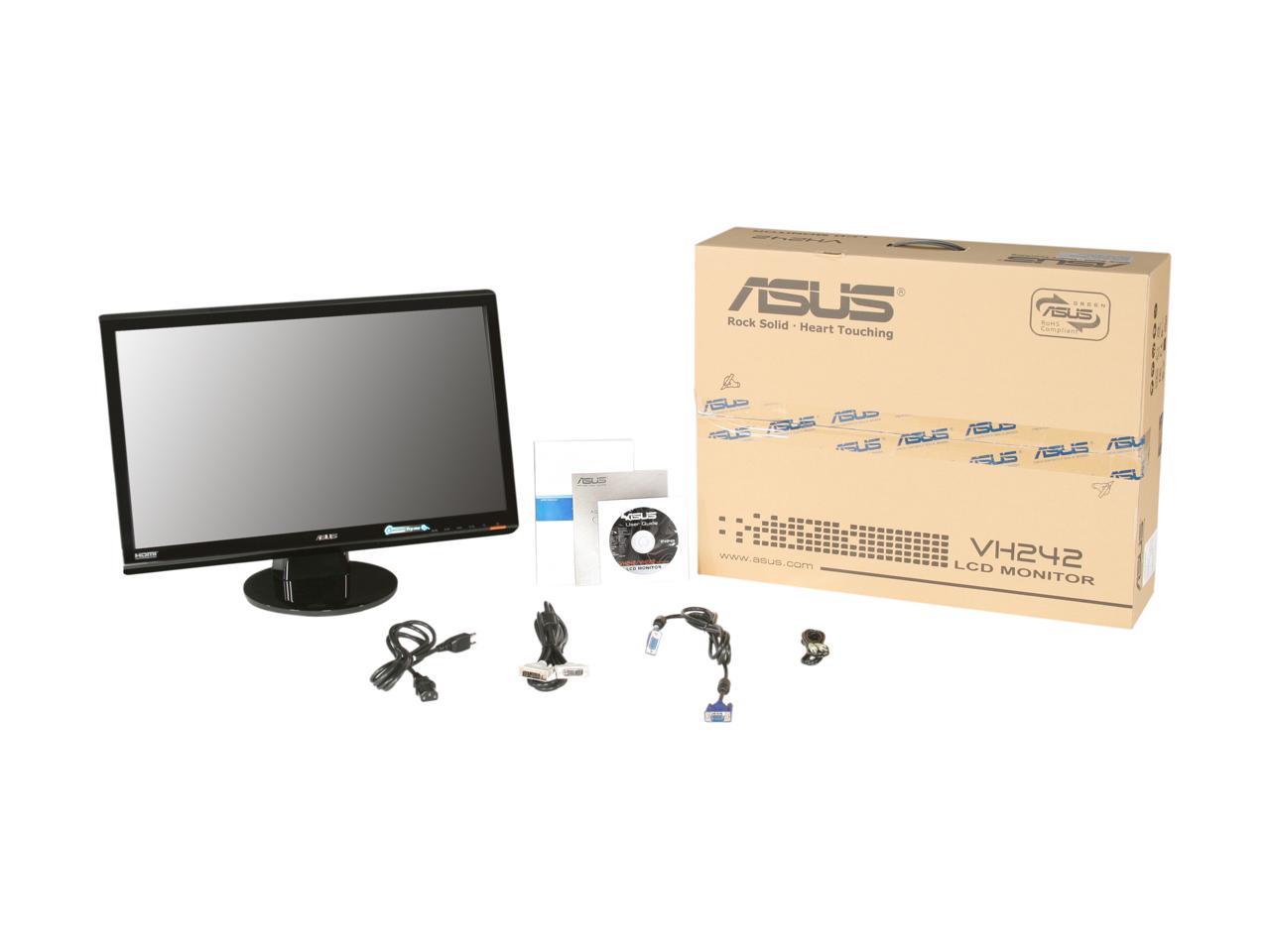 (2,028) Write a Review
OUT OF STOCK.
Overview
Specs
Reviews

Coming in contemporary glossy piano-black front bezel and smooth base, the stylish VH242H is also designed with sophistication, like convenient key controls, cable management, and VESA wall-mountable. Whether you're rendering video or graphics, enjoying your photos and movies, or gaming, you won't believe your eyes when you see the stunning color and clarity of the Asus VH242H.

Learn more about the ASUS VH242H

Cons: As many have said menu is non intuitive Lots of buttons on the front to confuse the less savvy.

Overall Review: Bought item as a gift as alternative to HDTV. Works well with Xbox 360.

Craig B.
Ownership: more than 1 year

Cons: I have two of these, one of which I purchased at the start of 2010 - they have different firmware and I've been unsuccessful in getting them perfectly matched up on my dual monitor setup up to this point... Not sure if I need to look into getting one of those tools that match up color and such. But a little inconvenient, nothing I'll take an egg off though =]

Pros: Cheap. The price has fluctuated a few times but all of them are a good deal. Getting it now at $230 is an absolute STEAL. My monitor arrived in perfect condition. No scratch, marks of any kind. Zero dead pixels. The colors are thoroughly vibrant and the picture is excellent in quality. More than enough ports to please any buyer with HDMI, VGA, and DVI. Honestly this monitor is a great replacement for ANYTHING you might have now. The quality for regular computer use is excellent. PS3 and 360 both look astounding through the HDMI port. Strangely enough the stand wasn't as wobbly as others have stated. If you're rough with the monitor then you might have a little trouble but I have yet to notice anything more than a slight wiggle.

Cons: I haven't had a thought in my mind yet that accumulated to a negative feature this monitor might have. That being said, although not being a con in my mind, I thought I'd mention the fact that the settings needed to be adjusted when I set the monitor up. The sharpness was set too high and needed to be lowered one notch short of all the way. And that was about it. I adjusted the brightness for my own liking, which was one or two notches from the default setting. Other than that, everything about this monitor was perfect. The color settings were perfect from the moment I turned it on.

Overall Review: I bought one of these as a replacement to my old Dell 2001FP. For about four or five years now that monitor was my baby. Once I received this Asus as a replacement, though, I could not have been more blown away. Just last night I've ordered a second one because of the sheer awesomeness of them. This monitor just can't be beat, and that's all thanks to Newegg. Received it on time when I was supposed to and I wasn't disappointing in ANY way throughout the process. I'll update the review if anything happens along the way with my monitor.

Pros: There are a ton of Pros with this monitor - you can read the specs for yourself, and they're very comparable with other high-end monitors out there. A few nice notes though (which I had a hard time finding when I was considering this monitor): 1.) SPDIF out - YES, the HDMI-IN port is the source for the SPDIF passthrough going out - you can hook up an Xbox360, PS3, or potentially a Cable/Satellite receiver to the HDMI port and it will pass through the digital audio signal from the HDMI port over to the SPDIF-out port. Works great too - I have an Xbox 360 hooked up and piping sound out to a Logitech Z-680 5.1 system, really impressive. 2.) Picture - very bright and very crisp, nicely configurable too and the SPLENDID feature (just hit a button and the picture is auto-tuned for specific tasks) works quite nicely also - my graphic designer friend was actually impressed with the color rendering also, and liked it over his HP monitor. 3.) No dead pixels & a nice guarantee to mak

Cons: Very few! *If I really, really had to, I guess I could gripe about the speakers, but if you're expecting massive sound out of ANY LCD display/TV, you're asking much too much - the thin-profile design of any of these units is simply too small to facilitate nice, full range speakers. Until Bose or someone comes along and starts contracting to add speakers to displays (tripling the price in the process), you can't (and shouldn't) expect much. Get a nice set of 5.1 speakers instead, you'll be much happier anyway. *I guess the only other thing (and this is a real reach too) is the 16:9, 1920x1080 aspect ratio - if you're used to a 16:10, 1920x1200 display, this monitor will appear a bit shorter (of course). These are obviously both major reaches - if you're thinking about purchasing this at all, stop it. Stop it right now, and just buy the monitor.

Overall Review: Really great touches and very innovative ASUS - I have to admit that I've been looking at monitors for months and it was tough to justify upgrading from my perfectly-fine 19" Westinghouse display, but with the jam-packed number of features, the nice picture, and the size, I finally caved in and decided this was it. I should note that I passed on a boatload of other models that didn't have what this one does (particularly the SPDIF out) for about a Benjamin ($100 for those who don't know all the faces on our currency) or so more, and I'm glad I did. Heck of a product ASUS! Oh, and did I mention I got this RIDICULOUSLY fast? Major credit to Newegg and UPS for really fast processing and shipping!

Cons: The blacks could be blacker, but this is not exactly a high-end monitor so that is expected.

Overall Review: Overall this monitor is a great buy for PC, PS3 and 360 gamers alike. I can't really think of anything bad for this price.

Pros: Sleek Frame, unobtrusive buttons, excellent connections. I have had no troubles with this monitor, and its been a wonderful addition to my workspace.

Cons: None so far - had it for about 2 months. I don't use the speakers, so I can't speak to the complaints others have with that. I will say, however - don't expect the speakers on a monitor to *ever* be good. Use external speakers.

Pros: I use it as the monitor for my primary computer, have no problems with it in that regard. Gaming, movies, web pages look great. I bought it for a good price for a monitor of this size at the time.

Cons: This is the main reason I'm writing my first review, is that as another reviewer pointed out, which I dismissed, there is a definite bleeding of light around the edges of the screen when the screen is black. Its completely fine when you're doing 90% of your regular tasks, but when you're watching a letterbox movie, and you're relatively close to the screen, its very noticeable. Its seems not to be as bad when you're looking from a direct angle, but when you're sitting close, the bottom part of the screen, which you're looking at from a high angle, the effect is at its worst. You get used to it, but I notice it every time.

Overall Review: Its a great monitor, and I didn't return it, but as I happen to be without a TV right now, I watch most of my movies on this monitor and so find the bleed annoying. But if you're not going to be watching letterbox movies on this monitor, or doing photowork or anything of that nature, its great. But if I saw it at a store before I bought it from here, I would not have made the purchase. On the plus side, it made me a more discriminating monitor buyer, so if I plan on spending more than this monitor costs, I'll definitely know what to look for.

Cons: Getting a little nervous about some of the posts where people have had to RMA it back after it failed after just a month or two of use. So far the monitor has been absolutely rock solid, only time will tell.

Overall Review: Just a comment in response to another reviewer who posted on 01/08/2010 "If you want to mount this monitor, it takes immense effort to remove the attached piece meant to fit into the stand. There are 3 phillip head screws that holds it on the monitor, but are blocked from being unscrewed. I had to take a pair of pliers and slowly rotate each screw from the side to remove all of them. Took perhaps a total of 20 minutes." I purchased a wall mount with this monitor and removing the desk stand is easy. The back cover of the desk stand has a slotted tab on each side of it, I just stuck a regular screwdriver into a tab and applied a little pressure and the cover pops right off. Then you have full access to use a screwdriver to remove the three philips screws that hold the stand bracket in place. Once that is off it is a snap to put the VESA wall mount bracket on and then attach it to the wall. This process was covered in Section 2.1 of the user manual.