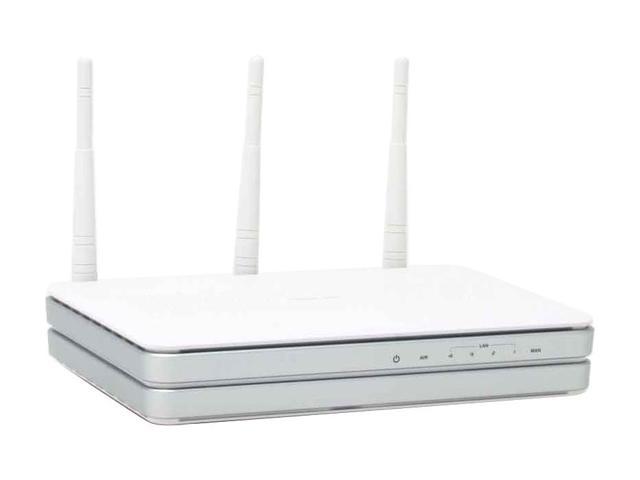 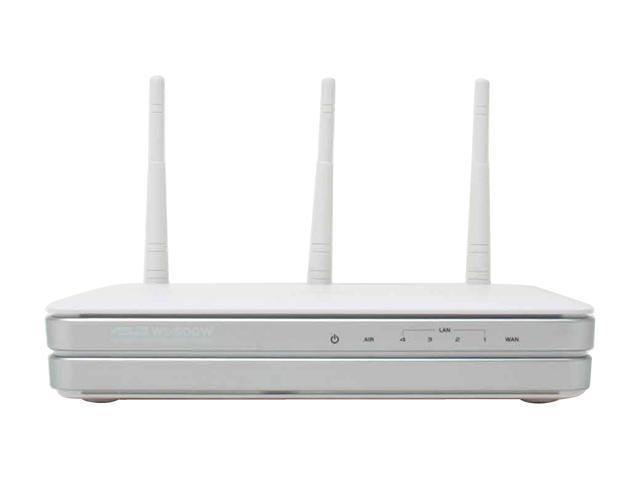 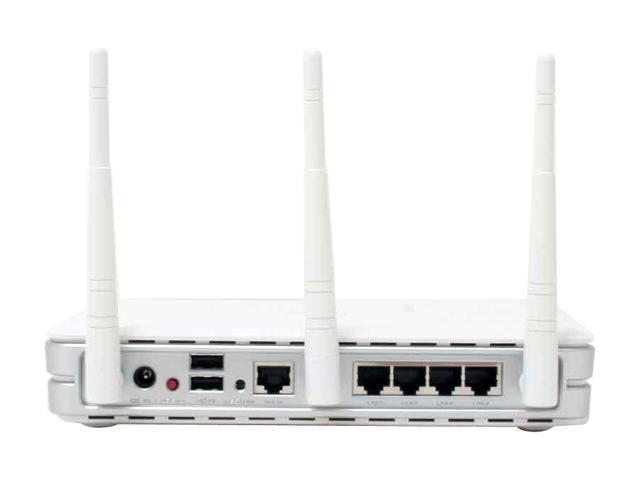 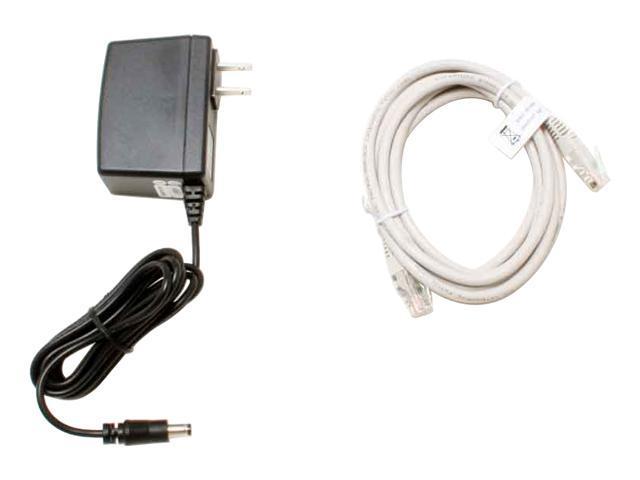 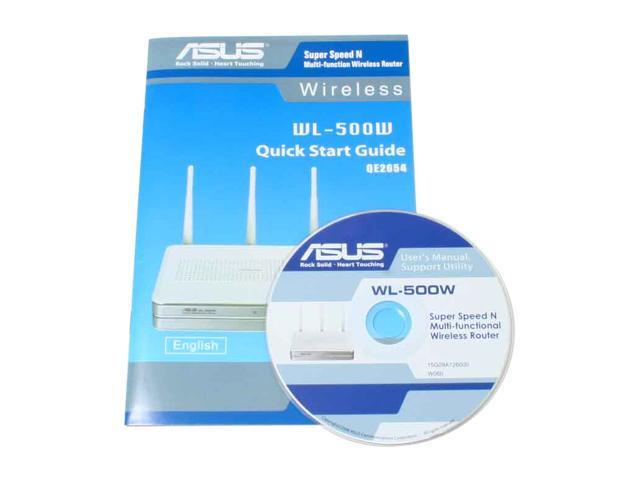 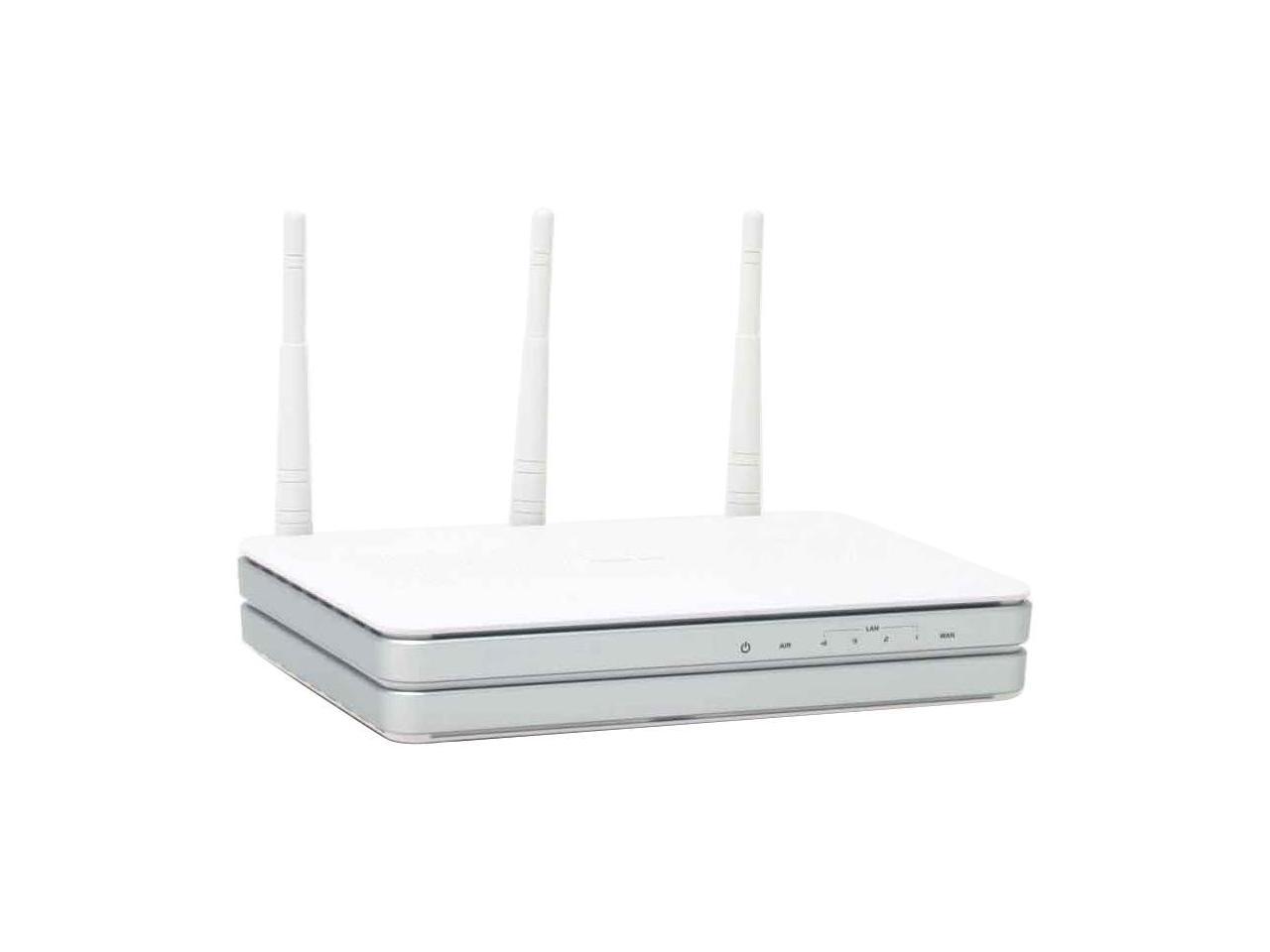 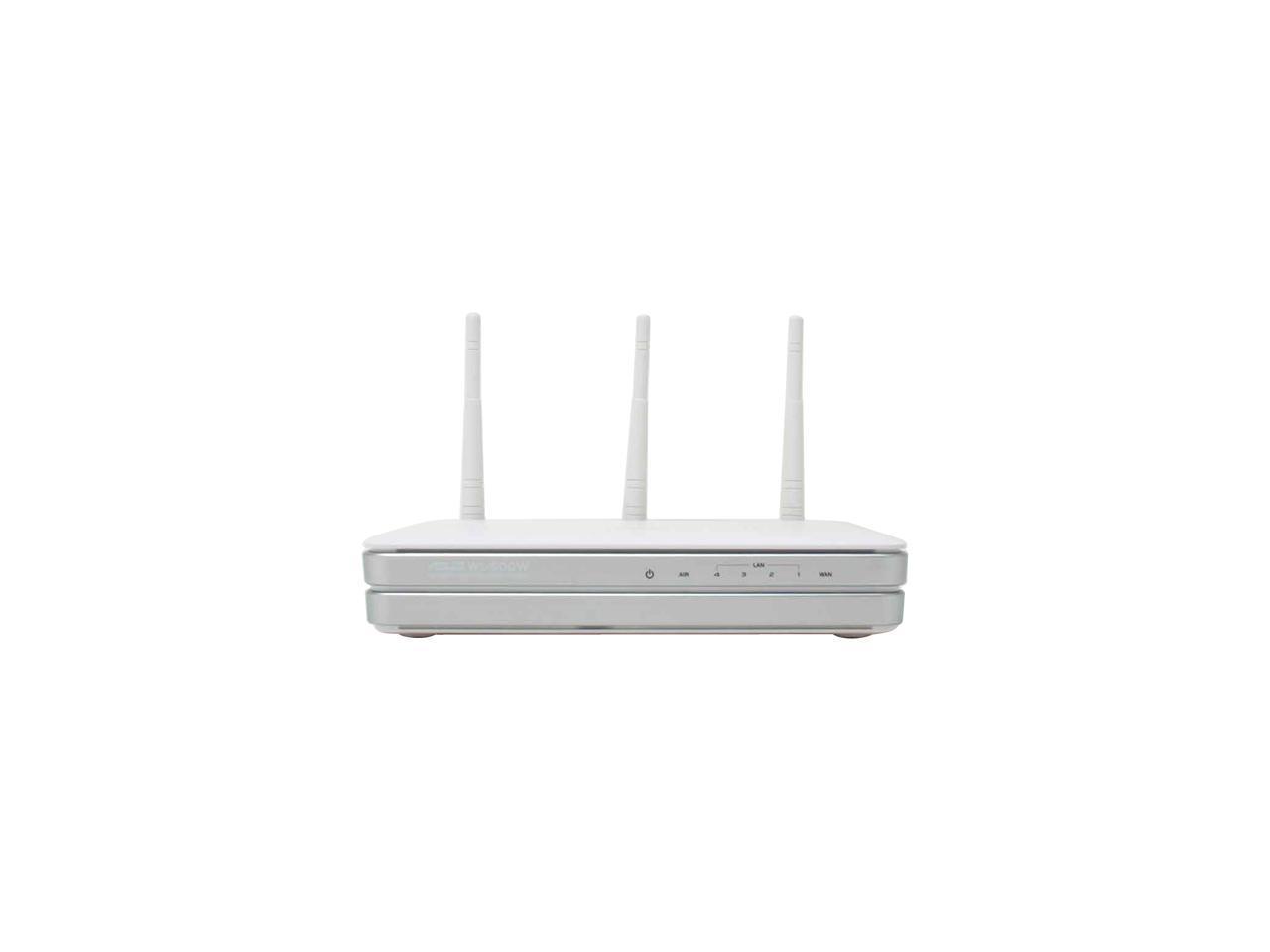 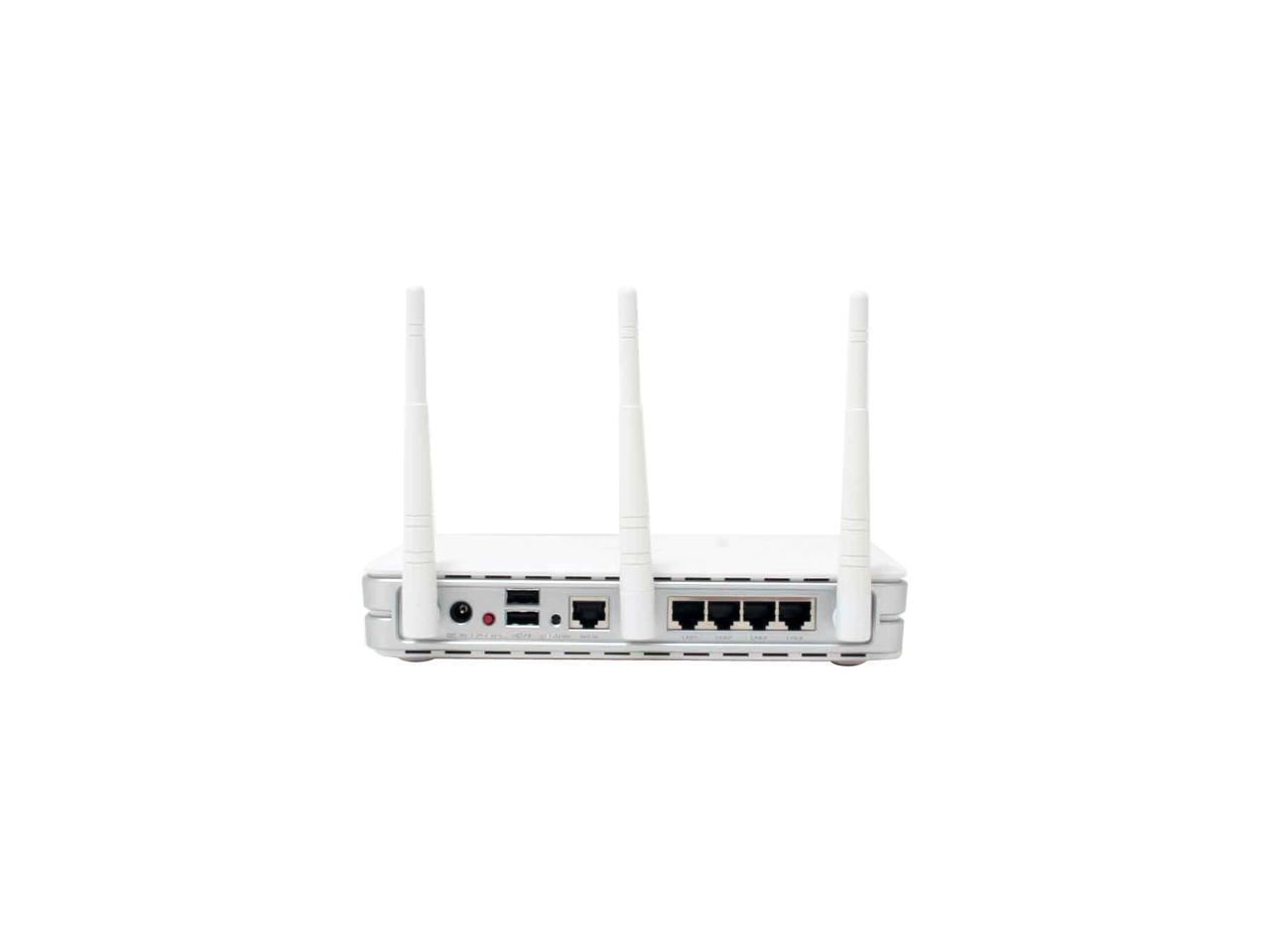 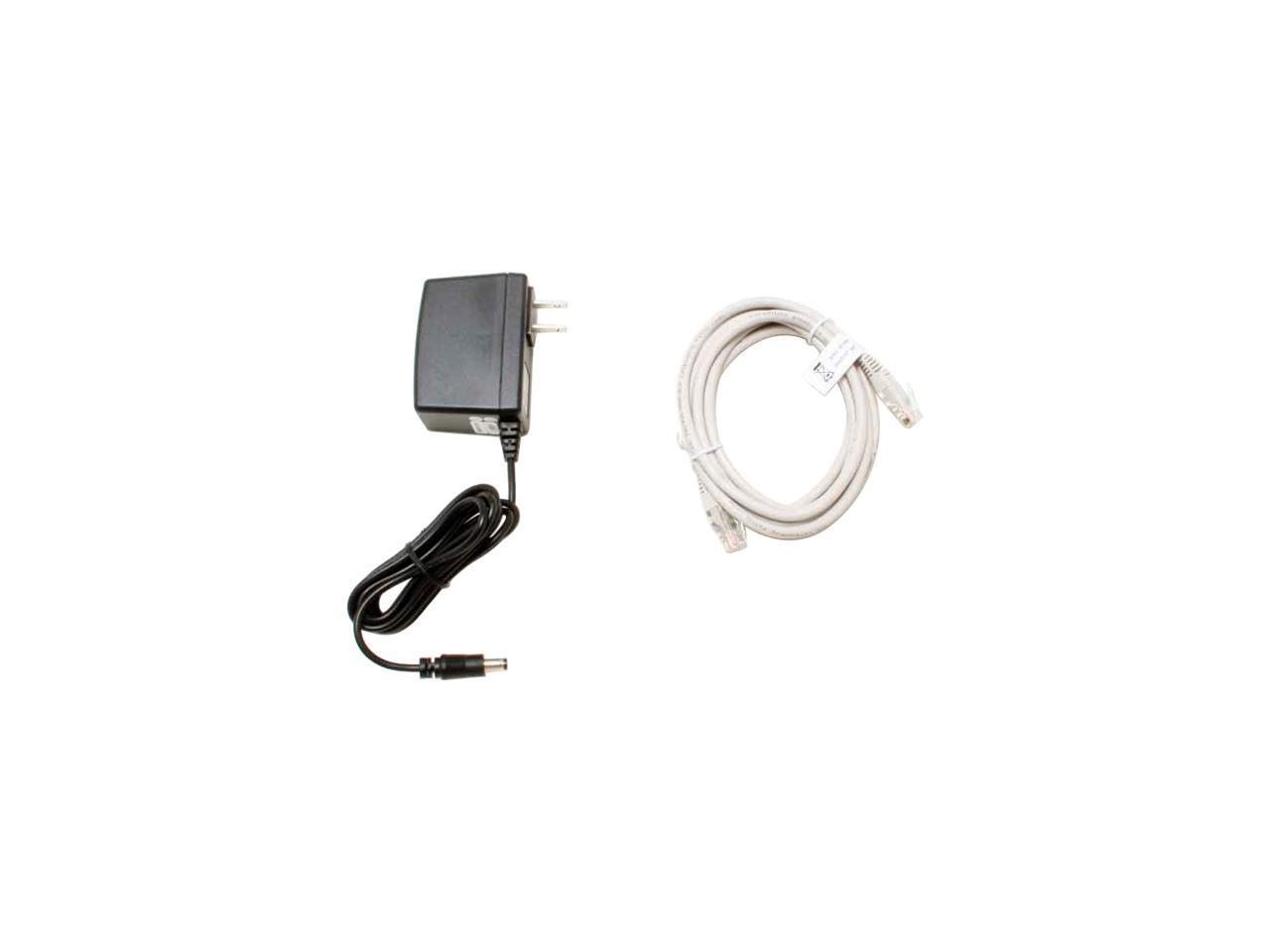 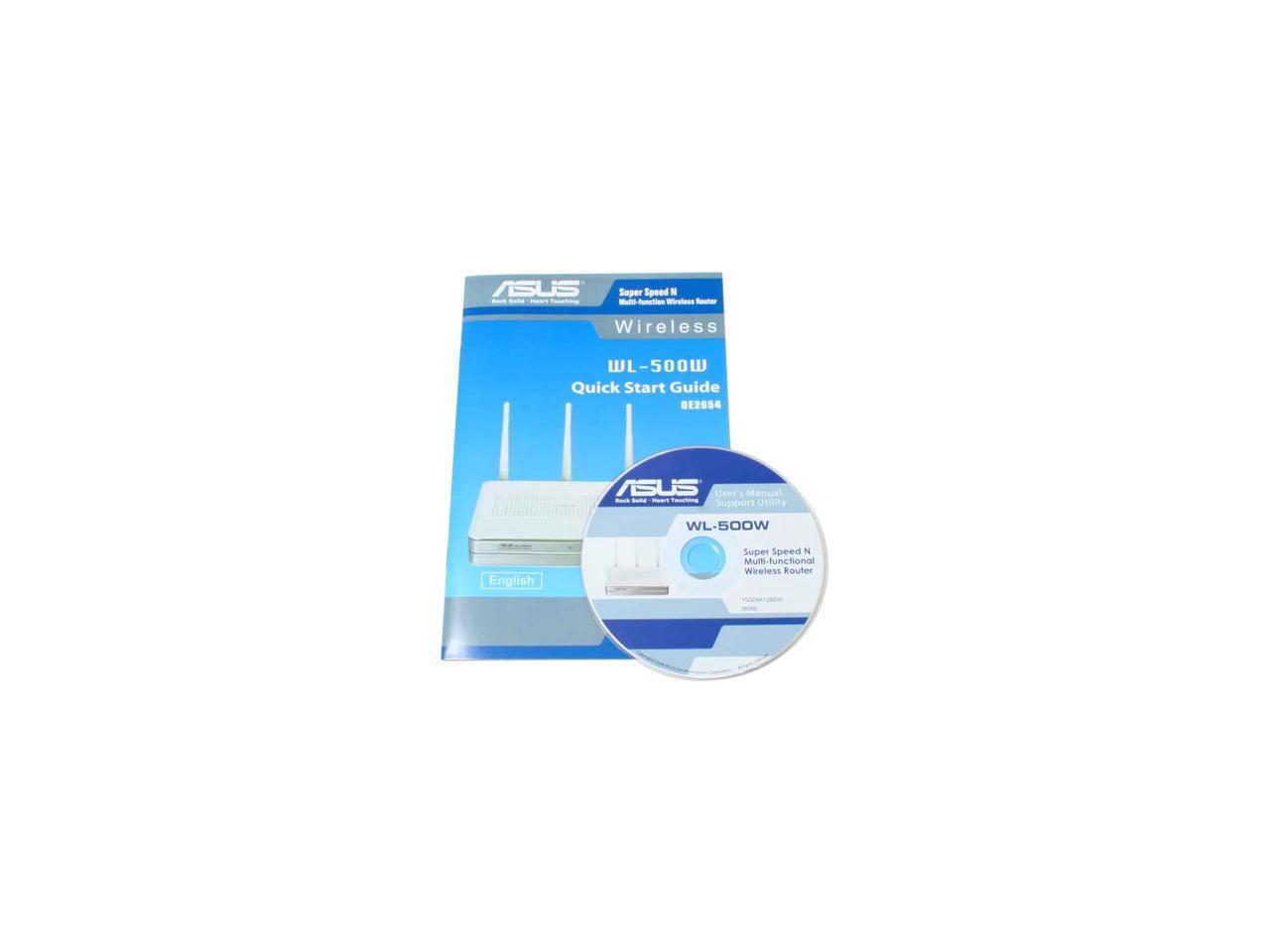 (139) Write a Review
OUT OF STOCK.
Overview
Specs
Reviews
The attractive ASUS WL-500W wireless router is more than just good looks. It's compliant with Draft 802.11n, the latest wireless technology offering greater range and data speeds than the older 802.11b/g standards, (when used with compatible Draft 802.11n wireless adapters) while still being fully backwards compatible with them—perfect for mixed-mode environments.
The router's MIMO (Multiple Input, Multiple Output) technology also makes it a natural choice for multimedia fanatics, minimizing errors and optimizing data speed through the use of multiple antennas for both sending and receiving.
Other handy features include Download Master, giving you the ability to download HTTP, FTP and BT (BitTorrent) files automatically from the Internet even without computer connection and connect and share multiple USB peripherals like printers and external hard drives with computers across your network.The WL-500 also has an EZsetup button that automatically configure SSID and WPA or WEP encryption.

Learn more about the ASUS WL-500W

Pros: - Great range and penetration - Share a printer, USB mass storage device (HD, flash), webcam - Can serve files from the HD via FTP to the world. - Supports WPA/WPA2 TKIP + AES - Cool look w/ mellow orange glow - Works out of the box (unsecured) with wireless B/G/N - Security configuration is easier than some routers, but you still need to understand what you are doing.

Cons: -Web management interface has some funny translations to english, but you can still understand everything - Can't use download manager unless the connected hard drive is formatted with FAT32 or EXT2

Overall Review: I have been waiting for a product like this for SO long. It replaces a Linksys WRT54AB (dual wireless A + B). I have been using this for about a month and it has not crashed or had any problems at all. It hosts my USB external HD and Canon i560 printer with no issues. Transfers are obviously not as fast as connecting it directly to your computer via USB, but the convient always on access to my files from anywhere w/ low power consumption outweighs that.

Cons: The stock Asus firmware is a bit lacking in features. Especially QoS is not very configurable. Ethernet ports are only 10/100. Gigabit would be nice. The three antennae are not removable, so you can't switch them out for more sensitive ones or easily fix a broken one.

Overall Review: If you're interested in replacing the original Asus software, there are basically two viable alternatives: dd-wrt and oleg's firmware. Oleg's firmware is a modification of the original, while dd-wrt is based on the original Linksys with heavy modifications. I've tried both, and dd-wrt has vastly more features, but oleg is easier to install. I'm currently running the DD-WRT v24 mega distribution (possible due to the 8mb of flash) with this router. The Asus firmware tool didn't work for me, and I was able to only successfully reflash it using the tftp method outlined in the dd-wrt wiki. The USB ports do work for file and printer sharing under dd-wrt, but it takes a bit of additional command-line work. Unless you're prepared to do that, the original firmware or oleg's will serve you better if you plan to use the USB ports. Overall, this router has been rock-stable for two weeks now. Highly recommended!

Pros: Rock solid hardware. Even my neighbors are getting 100% signal strength. USB, is the best feature ever! I connected a 1.5 Tb HD to it and now using it as media center, 802.11N being able to push data faster than 10Mb/sec makes it perfect to stream HD over the air. If u get Openwrt working on it you can even get ntfs support with ntfs-3g. 8Mb flash ... what more do I have to say?

Pros: This is just a fantastic router for the hobbyist/hacker who wants to experiment with DD-WRT, OpenWrt etc. The large flash and large RAM allow many packages to be installed. The two USB ports are a great feature that allows practically unlimited expansion. I have set mine up using a USB hard drive with one partition for expanded package storage, one partition for Linux swap space, and one partition for networked storage via SAMBA3. And still a USB port left over for a print server. You can run a DNS server on your home network, just like the big guys. Oh yeah, it's a fine wireless access point too, and connects at up to 270 Mb/sec with a draft-N supplicant as long as the two are in the same or adjacent room.

Overall Review: Never even tried the factory firmware. Strongly recommended for the alternative firmware crowd as long as you were not planning to set up VLANs. I have learned a lot about Linux and networking and had a lot of fun doing it, at a low cost.

Cons: Does not flash with DD-WRT without bricking at least 3/4 routers. It *is* listed as a supported device. It *does* work on maybe 1/4 routers attempted.

Overall Review: As many of us do, I flash my routers with DD-WRT. Let this be a warning, this is possibly *the* most difficult router on the market to successfully flash. I had it flashed with dd-wrt mega generic, and working as of Wednesday evening. Took down the router earlier today as I was moving my office, plugged it back in, and.... dead. None of the recovery methods (asus, etc) will work. It would be possible to redo it by adding a JTAG to it, but I guess this was a painful lesson learned Do *not* flash this router. If you want to get a good asus router to use with DD-WRT, stay AWAY from the 500W, go for the G series.

Cons: 1. The flashing process is more involved than LINKSYS. 2. No 5.2GHz

Overall Review: 1. Make sure you following DD-WRT flashing procedure step by step. It requires flashing 2 firmware and 3 resets. 2. When connecting with INTEL AGN card, do not use WPA/TKIP combination. It just doesn't work. Use WPA/AES or WPA2/AES instead. 3. If your wireless card is compatible with 40Hz channel width, using this setting will give you higher bandwidth.

Pros: It works with dd-wrt, has two usb 2.0 ports and has run really solid for the last 8 months.

Cons: Wish it had esata port and gigabit Ethernet Then I would use it as a file server also :) Bricks Easily But unbricking this unit works. I used the pin 9 method others used different methods. (once I got dd-wrt on no more problems)

Overall Review: I use DD-WRT v24-sp2 (01/01/09) mega (SVN revision 11296M NEWD Eko) Firmware. I use both USB ports, one with network laser printer, and the other a usb flash drive. I bought this unit for being dd-wrt compatible, and I would buy it again.

Pros: Range, easy to setup, design, price. Works great as NAS with external USB Harddrive Built in FTP works well, but has very limited configuration. (An addition of a built-in HTTP Server would have been awesome)

Cons: Easy to setup, maybe way too easy with virtually no configurable options. Did not work well with printer. I have lexmark multifunction printer, it is able to print, but does not complete the print job and the print window just hangs in both WinXP and Vista64. Was not able to print from Suse 11.1. Other multifunction such as scanning does not work. I am not able to make the download manager work which is supposed to download from http, ftp, and torrent directly from the router without having to keep your computer left on.

Overall Review: As a router and NAS, this is a great product. I would have paid the amount I paid just for those features. But if it advertises the functionality which does not work, that diminishes the overall rating of how much I recommend this device to others.