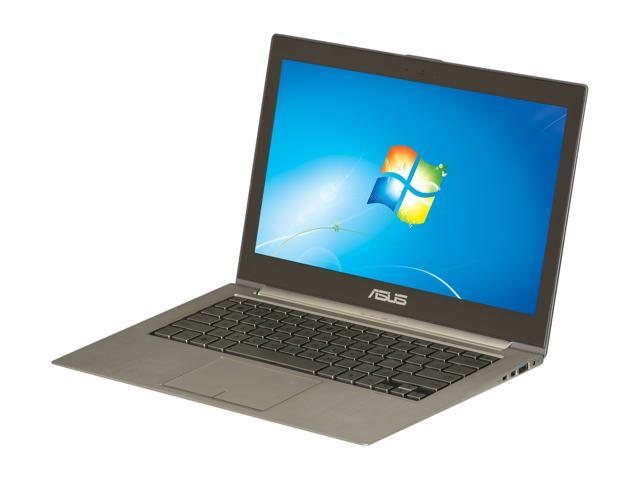 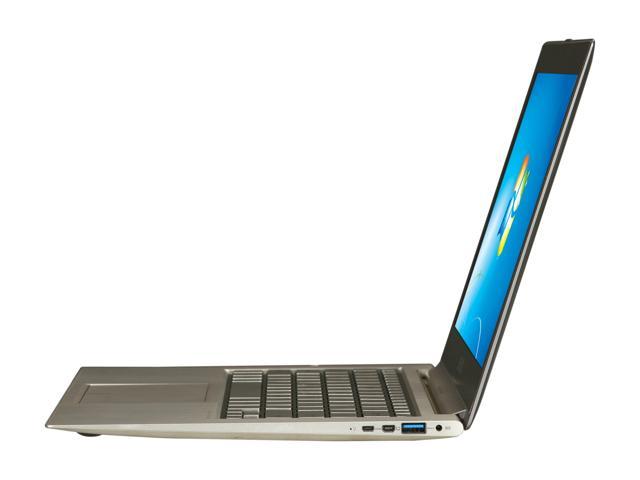 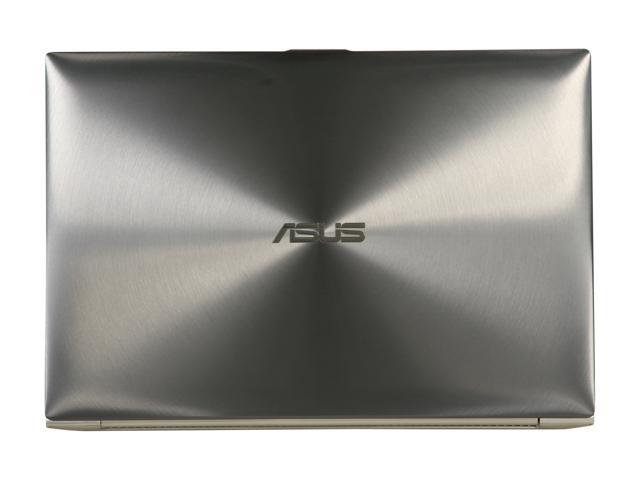 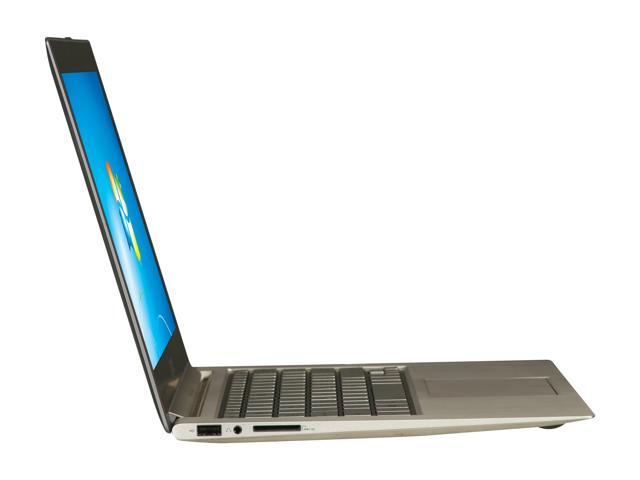 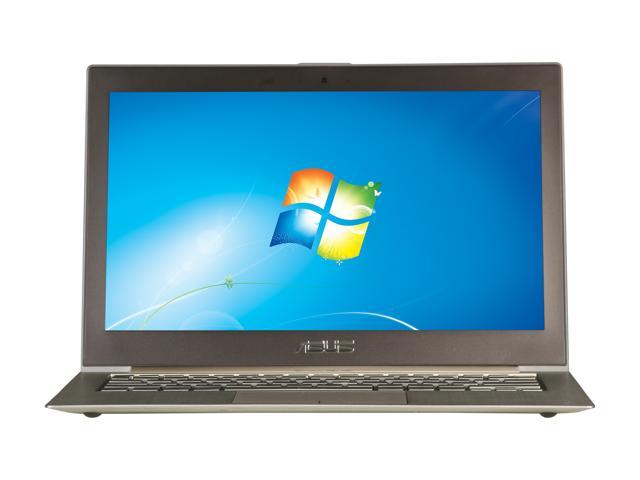 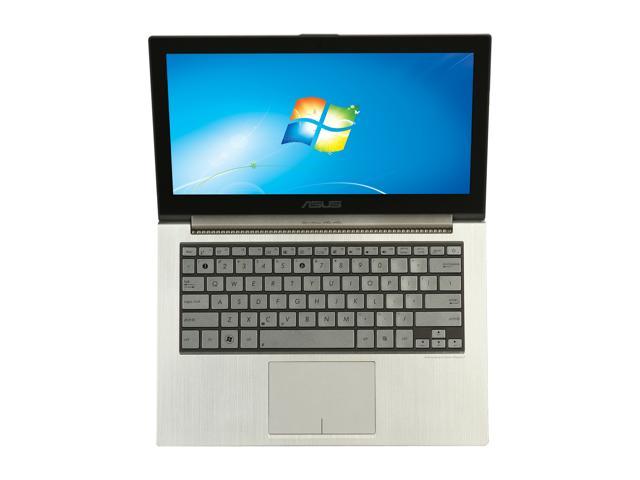 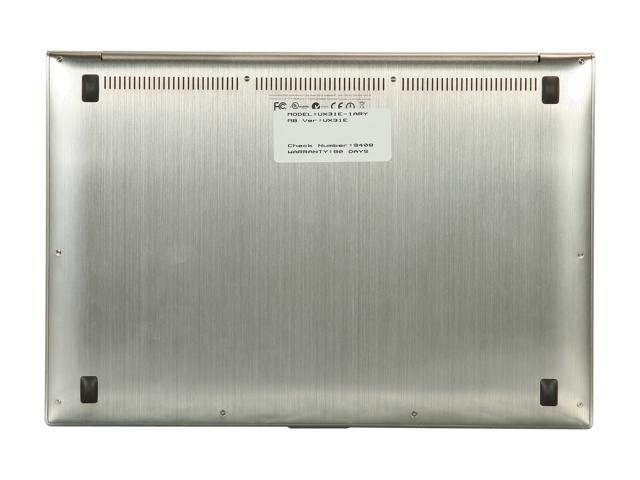 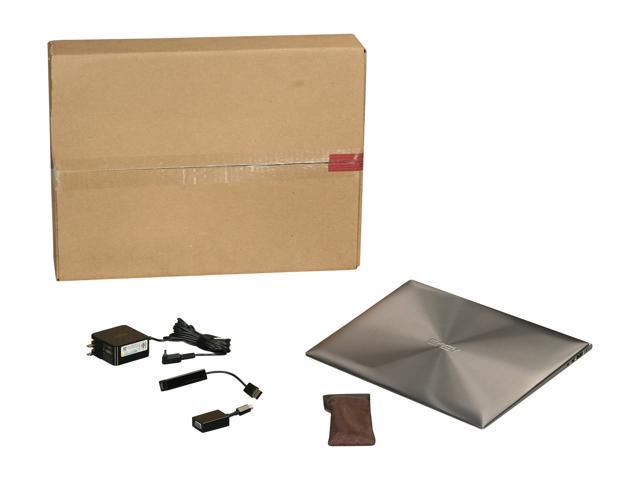 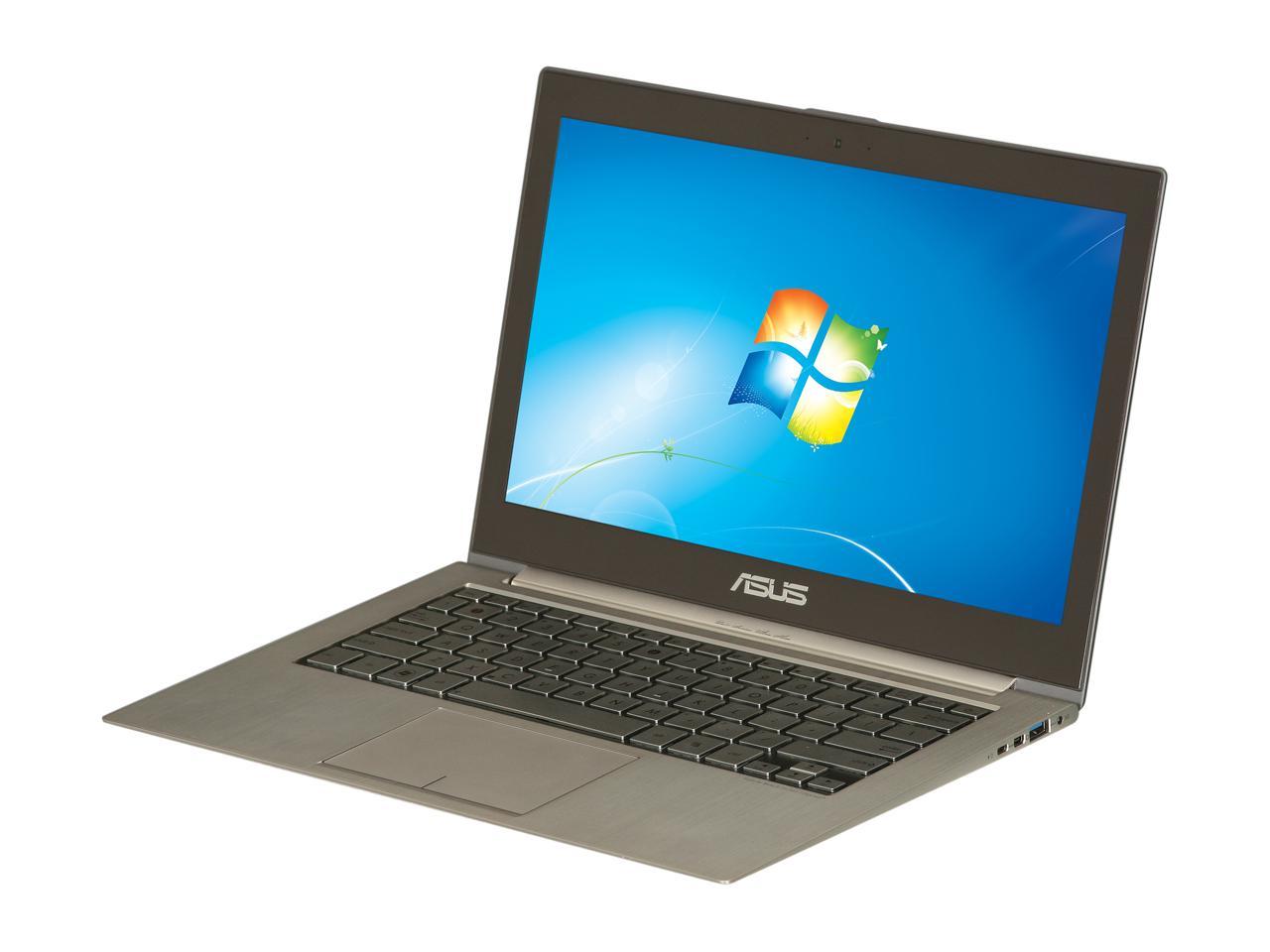 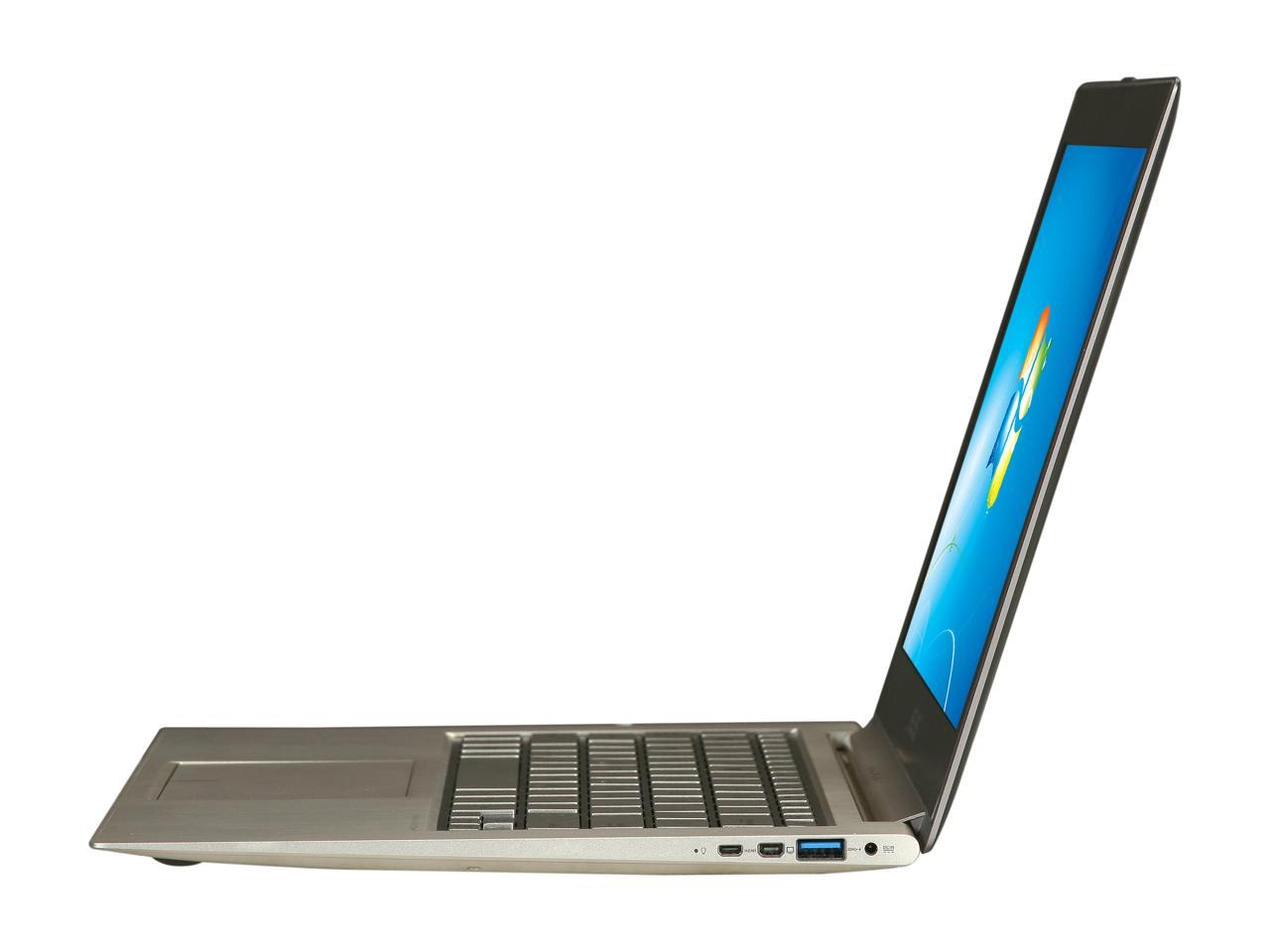 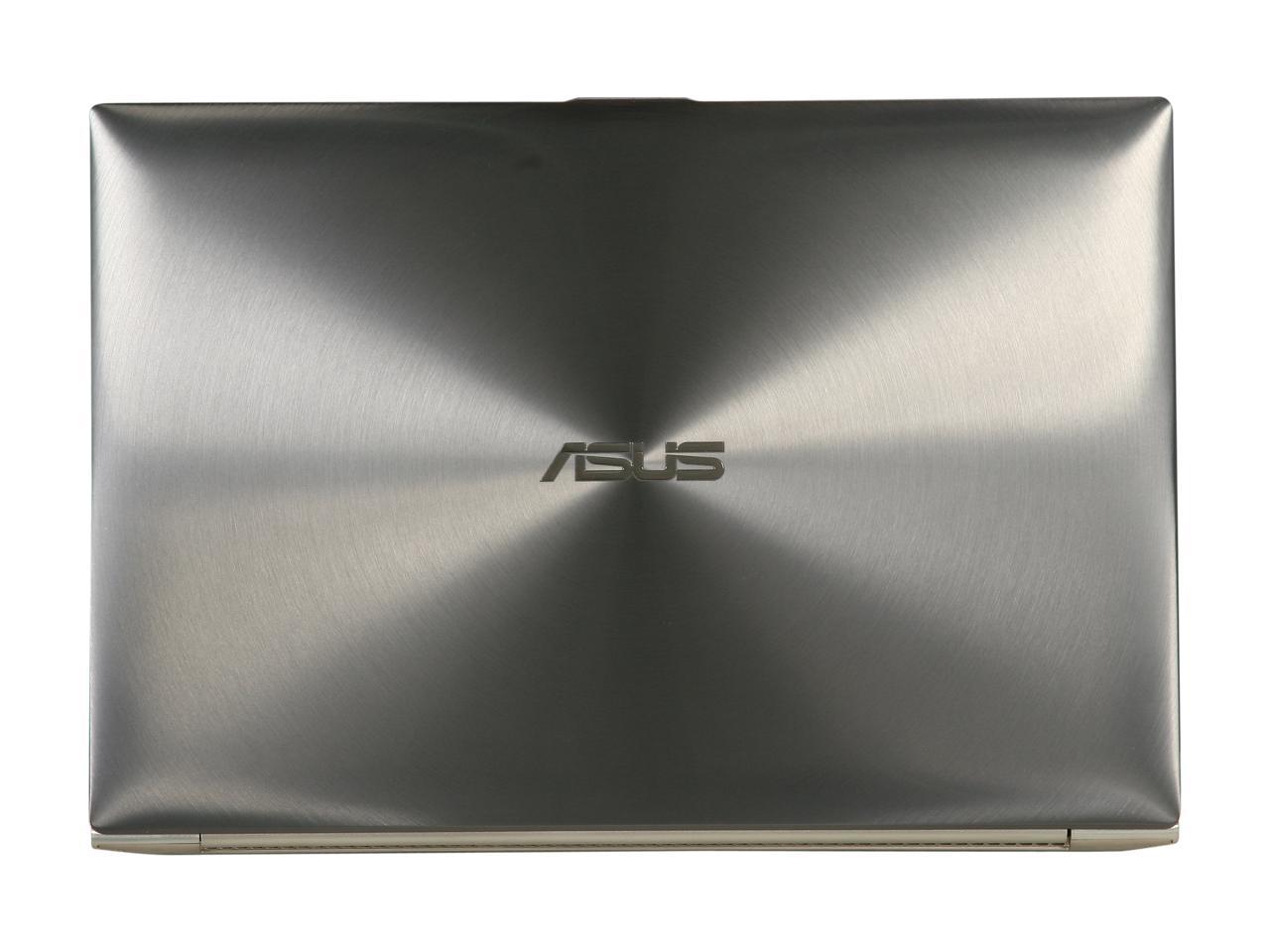 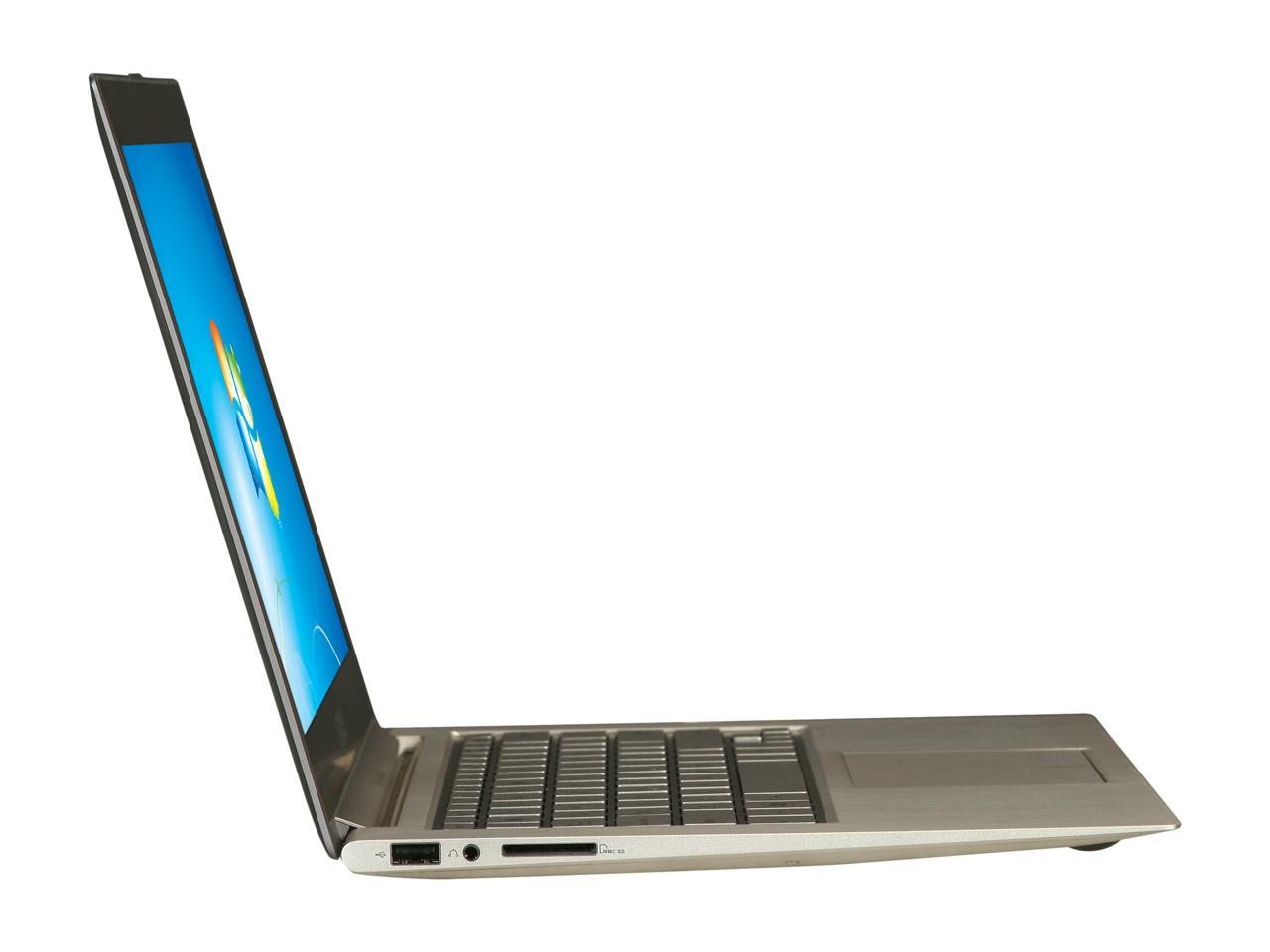 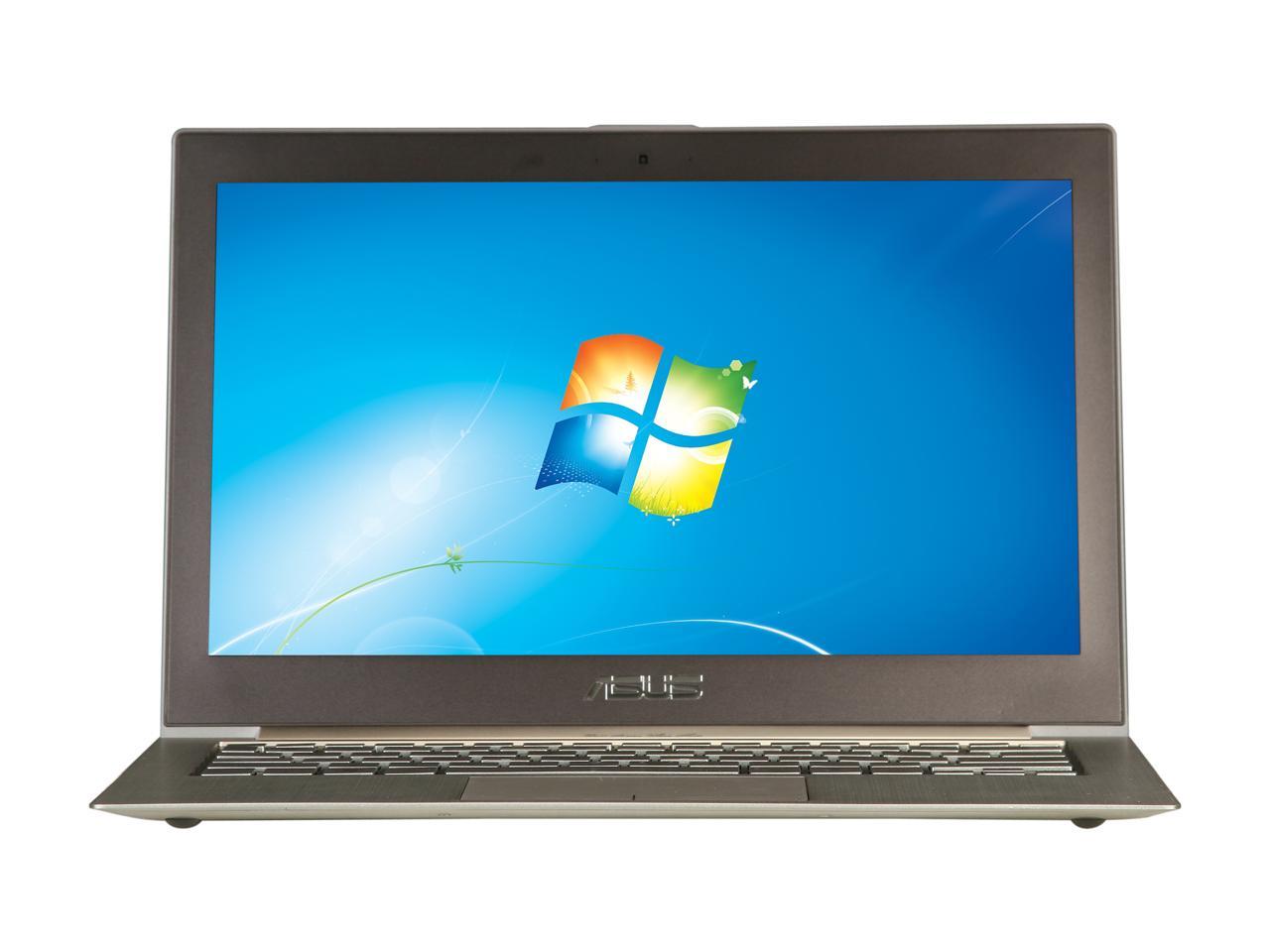 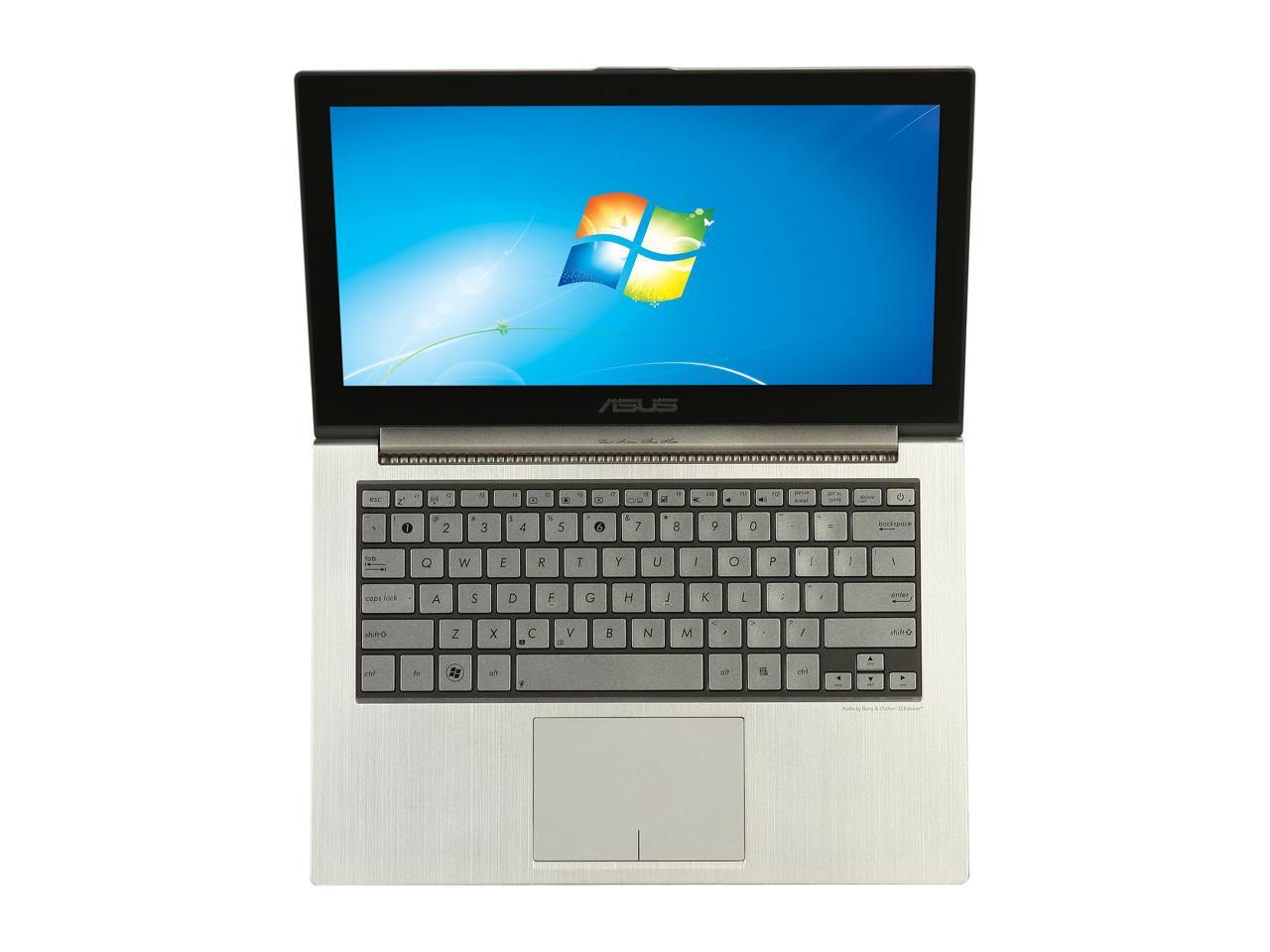 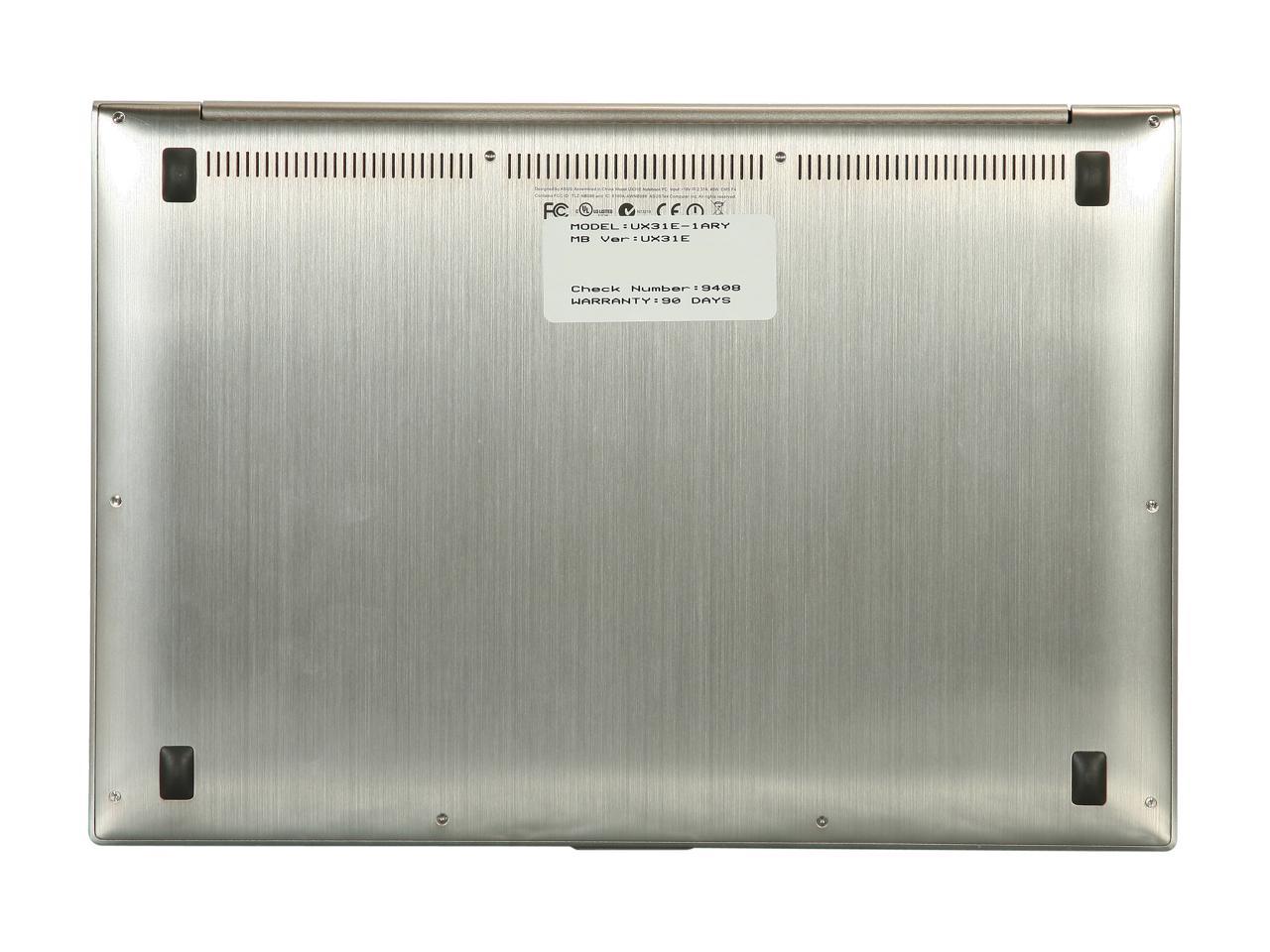 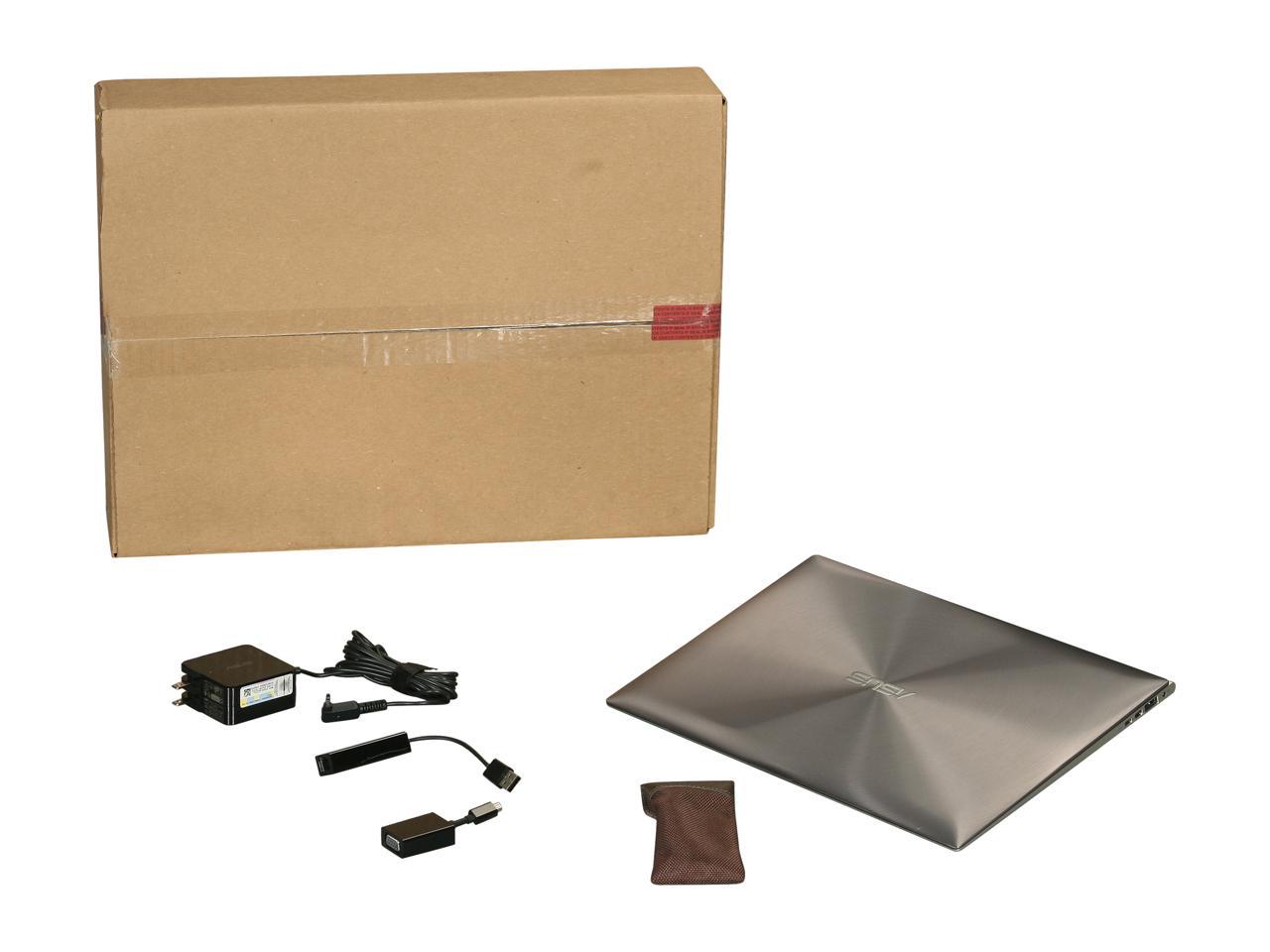 This means the product was tested and repaired as required to meet the standards of the refurbisher, which may or may not be the original manufacturer. Any exceptions to the condition of the item outside the manufacturer’s information should be provided in the listing, up to and including warranty details.
(43) Write a Review
OUT OF STOCK.
Overview
Specs
Reviews

Learn more about the ASUS UX31-RSL8

Cons: -666mhz RAM. I was shocked to see it has 4gb of 666mhz DDR3 RAM. Figured it'd be a little faster -Battery life is good when in power saver where it throttles the CPU and keep brightness down but if you run it in performance mode it goes down pretty quick -qwuerky touchpad -appears the refurbished units have 90 day warranties rather than the 1 year that comes with new units

Overall Review: Comes exactly as pictures. A brown box, 2 adapters, a power cord, and a yellow sheet telling you how to create a backup disc. Not sure why so many people complain about that when it's clearly pictured that way. For the price this is a great option for someone who want's something that is extremely light and portable with a great screen and solid hardware. To me this is a perfect option for a student or anyone else who's mobile but doesn't want to sacrifice power and go the tablet route. Remember that by the time you take this out of the box it is an at least 1 year old model. This means plan to sit down and run a lot of Windows updates as well as visiting the ASUS website for newer drivers. I immediately updated the touch pad driver. It's tolerable but not as fluid as the Apple products. For example sometimes it will stop moving the pointer if you accidently rest your thumb on the pad. Minor issues but little things that make the Apple touchpad the best in the business. Also mine shipped with BIOS version 207 and the latest is 214. So you will likely want to update your BIOS. Simply download the flash utility and the BIOS file and a few minutes later you're down. F8 should get you into the BIOS menu at bootup but be quick as this unit does bootup in the 15-20 second range as others mentioned. All in all for $620 it's a great Ultrabook. Obviously my opinion can change over time is the long-term quality is put to test but the initial build quality seems top-notch and the hardware is solid.

Pros: Absolutely beautiful, incredibly thin. Excellent battery life, which is especially useful in support of the quick wake-up from sleep (ready by the time you've finished opening it up; like half a second). It's also completely silent. I'm not even sure whether it has a fan; that's not listed on the details page.

Cons: I bought this computer for my mom, who is not a fast typist, and she mentioned that the keys occasionally don't register keystrokes. I had also noticed this while I was initially setting it up, although I had read about it in some other reviews on here, so I was unsure whether I was just seeing what I expected. She did say it seems like it happens when you hit them off-center, so maybe it just takes getting used to. Who knows, it might even improve your typing form! Also, perhaps this is just an issue for anyone trying to use these "chiclet" keyboards for the first time... that's just speculation, though. The keyboard has pgup and pgdown stuck on the arrow keys as Fn things. This is absolutely ridiculous; they're among the most important keys, both for scrolling and tab navigation. I suspect I might be able to get used to holding down fn to use them, but considering how much I use them (I have everything in KDE that shows tabs configured to respond to ctrl+pageup/pagedown, and use them quite a bit), I think I might not be willing to take the risk, if I were considering buying one for myself.

Overall Review: There's a utility for getting an image of and/or deleting the recovery partition. I went to do both, since freeing up a couple of gigabytes on the SSD is worth it. There was a "write iso" button, and a "delete partition" checkbox. I figured checking the box would make it delete the partition after I had had it make the iso. When I checked the box, it gave me a "deleting the partition will make it unavailable" dialogue; I clicked ok, figuring it was just a warning for when things started actually happening. "Congrats on deleting the recovery partition!" WHAT. I have never before seen a checkbox used to make something actually happen (let alone something consequential and irreversible), rather than set an option. This is BY FAR the worst interface design I have ever seen. The fact that it's so entertainingly bad actually sort of compensates for the fact that they tricked me into deleting the recovery partition. I'm not listing this as a con because my mom is very good about not screwing up computers / getting them infected, and so I'm not expecting to ever need it. Still, this does not reflect well on ASUS. Overall: if you can get this refurbished at the price I got, and you're not too attached to the pgup/pgdown keys, this laptop is an insanely good deal.

Pros: The unit itself is a thing of beauty. As far as performance, speed and memory are both excellent. I spend most of my time running linux as a guest OS. VirtualBox and LinuxMint14 installed effortlessly and run perfectly. Boot up time for linux is a mere 9 seconds. I couldn't be happier with the performance.

Cons: The only con is of course the 128GB SSD size... As others have mentioned, I did receive the UX31E-1ARY

Overall Review: If you're tired of lugging around a 6 or 7 lb bulky laptop and are think of making the move to an ultrabook, put this one on your short list.

Pros: 1. My unit had a 1600x900 screen even though this page listed 1366x768. That was awesome. 2. Super thin. 3. Awesome build quality: feels like very well made sturdy laptop. All metal enclosure and keys. 4. Reminds me of the macbook airs that I have owned over the years. 5. Small power adapter that is easy to lug around 6. Price for a refurbished unit is amazing. Though I have seen great deals for even newer Zenbooks. Really good values. 7. SSD is good. Also, has ethernet adapter, nice.

Cons: 1. Default firmware/drivers need to be updated right away to make the touchpad work well. 2. Battery life is not as long as I had expected. I am seeing at 5-6 hours in normal usage at best. 3. My unit was clearly preowned and had fairly minor scratches and bumps. Nothing serious though.

Overall Review: 1. I set it up to dual boot Ubuntu 13.04. Runs fine, no issues. 2. Wish ASUS had added a displayport adapter to support 2560x1440+ resolutions and provided a displayport/hdmi to vga converter instead of mini-VGA port. They could then use the space to have an extra USB port. 3.

Pros: This refurbish in particular had, as other stated, 1600 resolution, as opposed to what is shown here. Computer had very light dents and overall looks pretty new. Changer is really scratched - but comes with a protective film so after removing it it looks fine. Where are these refurbs from? Comp/USA. Mine came with a sticker that reads exactly that. Another company bough Comp/USA as it was backrupt, and now decided to get rid of Comp/USA name, and this happened during Dec 2012. So these Refurbs likely have to do with that reoganization and may be the reason why there are so many of these refurbs. I got this for my sister, and it came with Adata SSHD and Elan touchpad, which was the best possible options. I hope my sister would like it. I looks great - like timeless. Since it all aluminum, the computer doesn't look modern, or old. My only concern is the battery, as there's no indication on how to change it - or if easy at all. Software: it came with all drivers updated, and a fresh Windows install. In general, the computer is nice looking. The only con is that the HD 3000 integrated card is not great - but you can't have everything. For light games, it'll be superb, and for 995 of tasks this computer works perfectly. The solid state disc makes things really blazing fast, but this has been mentioned already.

Cons: Touchpad...maybe due to multitouch gestures, sometimes behaves strangely. I also think the design is flawed. The button surface is shared with the main touchable area, and there's no clue except for lots of practice of when you reached the limit. It will just "stop working" at some point...where the buttons start. You can get used to it and it's not a huge deal.

Overall Review: A nice buy if you value style, compactness and your budget. The Solid state disc is a must. I also have one and never regretted for one second the extra cost. It sames you a couple of days of waiting (combined) during the year. I've gone from minutes to seconds for Outlook searches, for example, and I do like 10 searches a day at least - to name one example. But stand by to On in 2 seconds - I no longer care to disable Stand By in 5 min. It's like an iPad.

Cons: the power key is right next to the delete key, has a ton of bloatware that needed to be removed. Missing some drivers and this model is not listed on the asus support site.

Overall Review: Takes some scavenging to grab all the correct drivers but if you know what your doing this will make a great laptop for you.

Pros: A very fast (to boot) really good looking Ultrabook with great specs for under $700. * SSD makes this ultrabook fast to boot and the 128GB drive provdes ample space for applications and short-term data. * i5 processor a good choice for a workman ultrabook - powerful enough for minor video processing and frugal enough on the battery to yeild reasonable disconnected use. * USB3 port provides the means to connect a small fast portable HDD (like seagate expansion or WD passport). * Generally high specification for other components including audio, bluetooth, wifi and so-on. I purchased one for a client (see review below) and I liked it so much I bought a second for myself. This one came with the 1.6GHz processor and I can't see any real difference between it and the 1.7GHz version.

Cons: Be ready to install new firmware (v214 as of this writing) and lots of driver updates. * Keyboard system is prone to lost strokes - especially first keystroke when on battery power. I found I needed to coax the keyboard along. I usually pack a small bluetooth keyboard for use with my iPad - I think I'll be using it for this ultrabook also. Really the keyboard is the only major complaint with this system.

Overall Review: A solid little performer with good features and extensible enough (bluetooth & USB3) to meet most needs. I test transfer and file handling I placed a 30+gb .MKV file (a blu-ray movie) onto a portable drive and attempted to play it form a portable drive connected on the USB 3.0 port. The video was shakey. After I thought about it for a while I copied the file to the SSD and tried again - it played perfectly and looked stunning.

Overall Review: I would reccomend this to anyone.