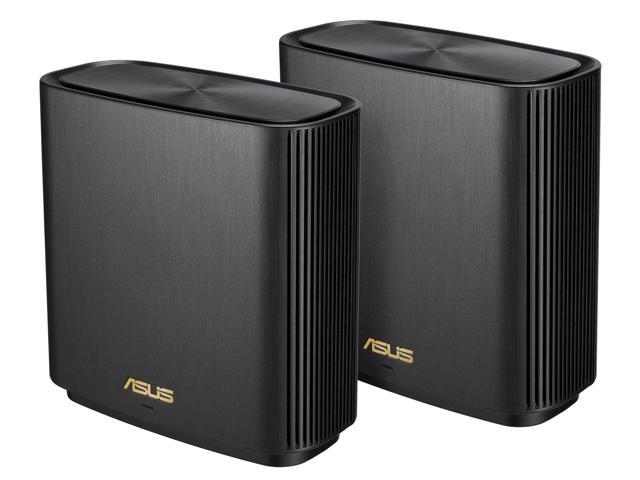 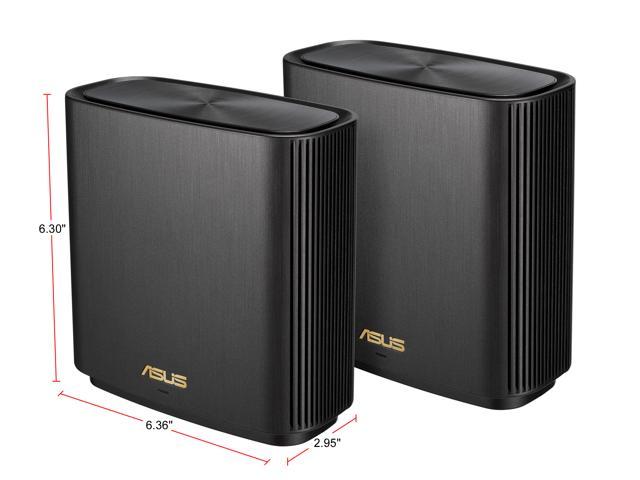 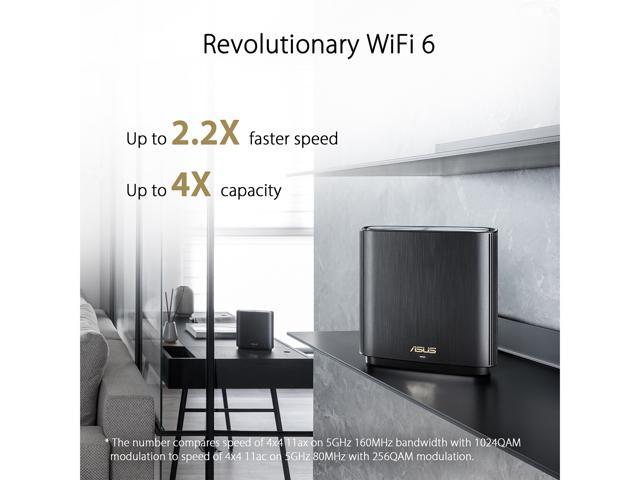 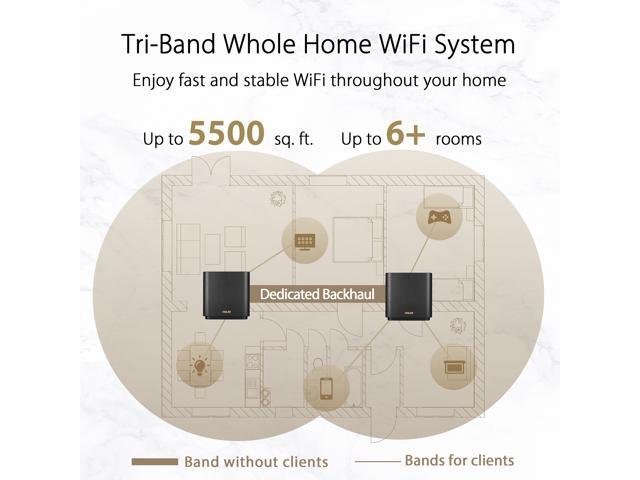 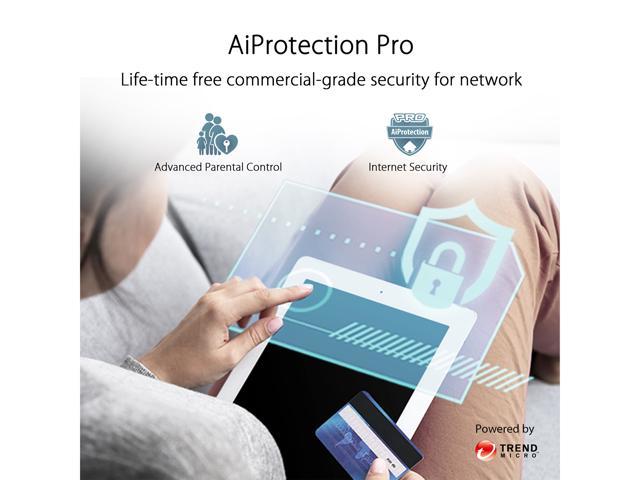 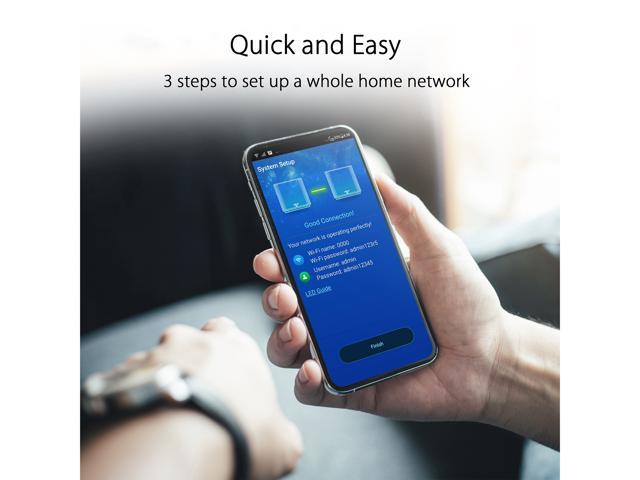 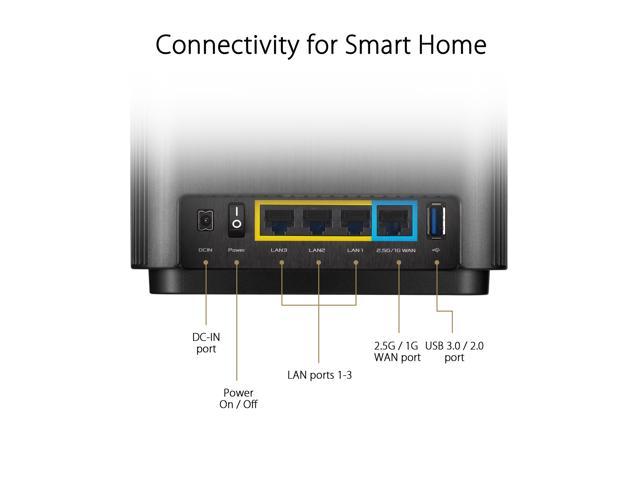 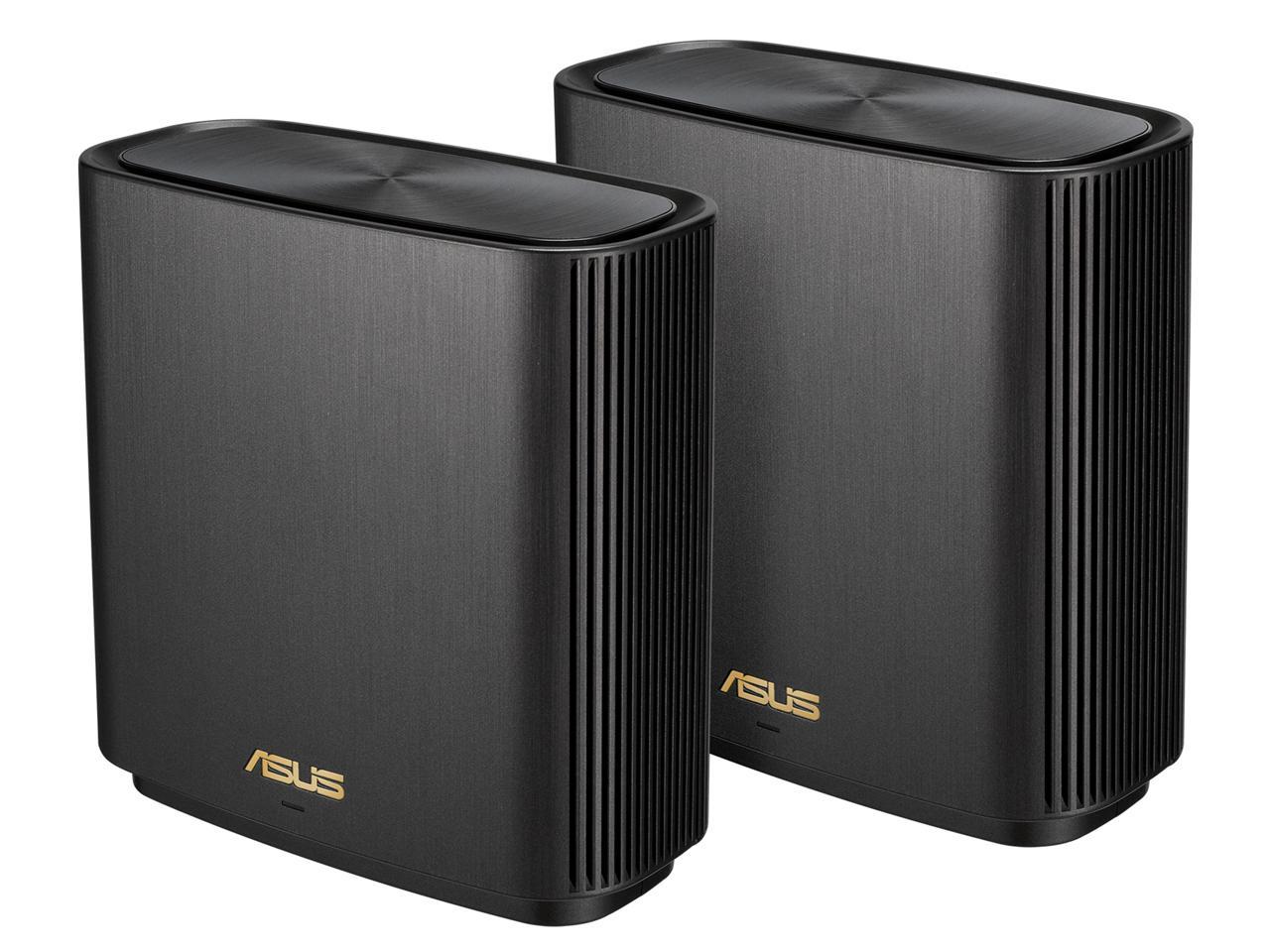 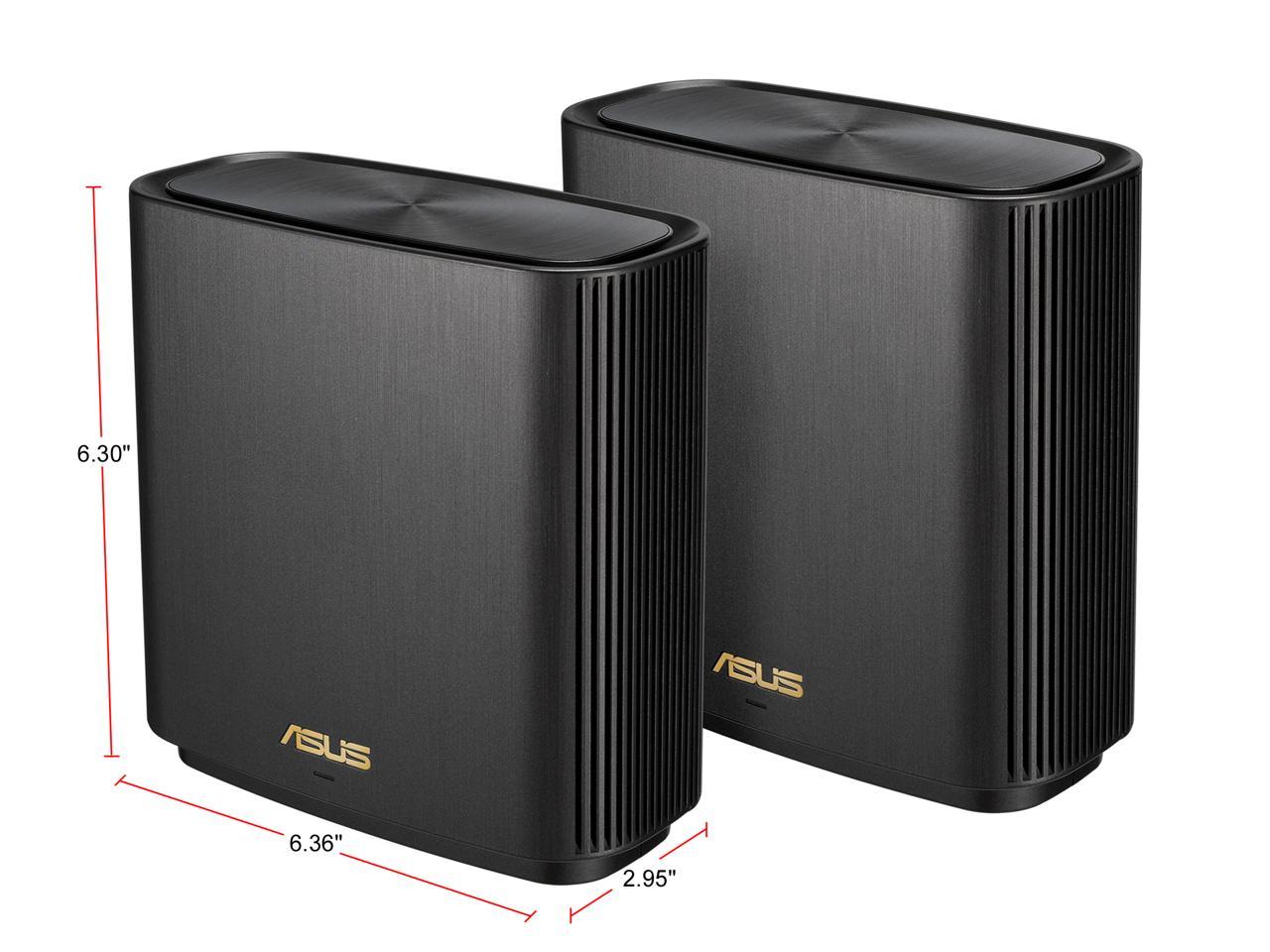 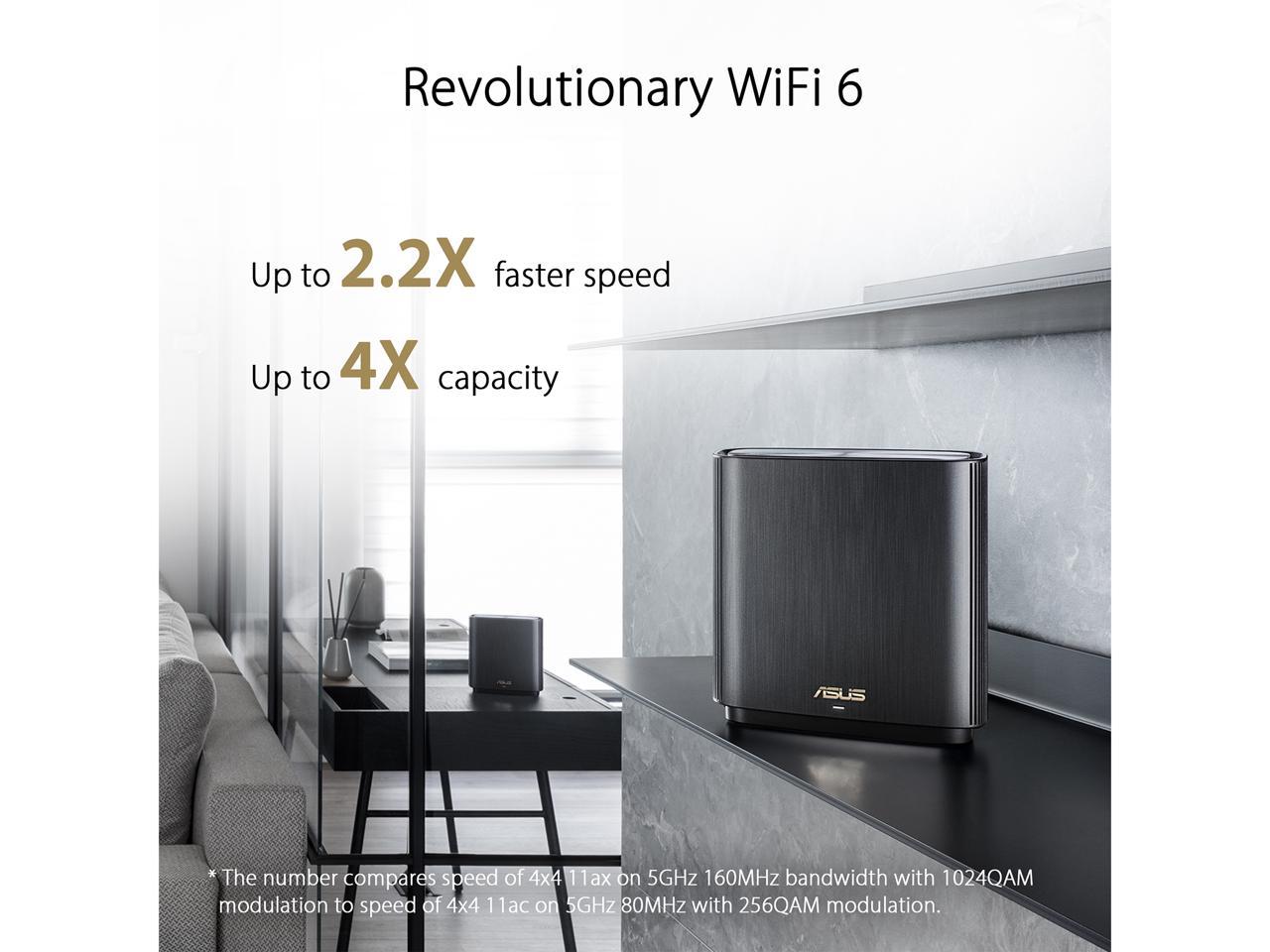 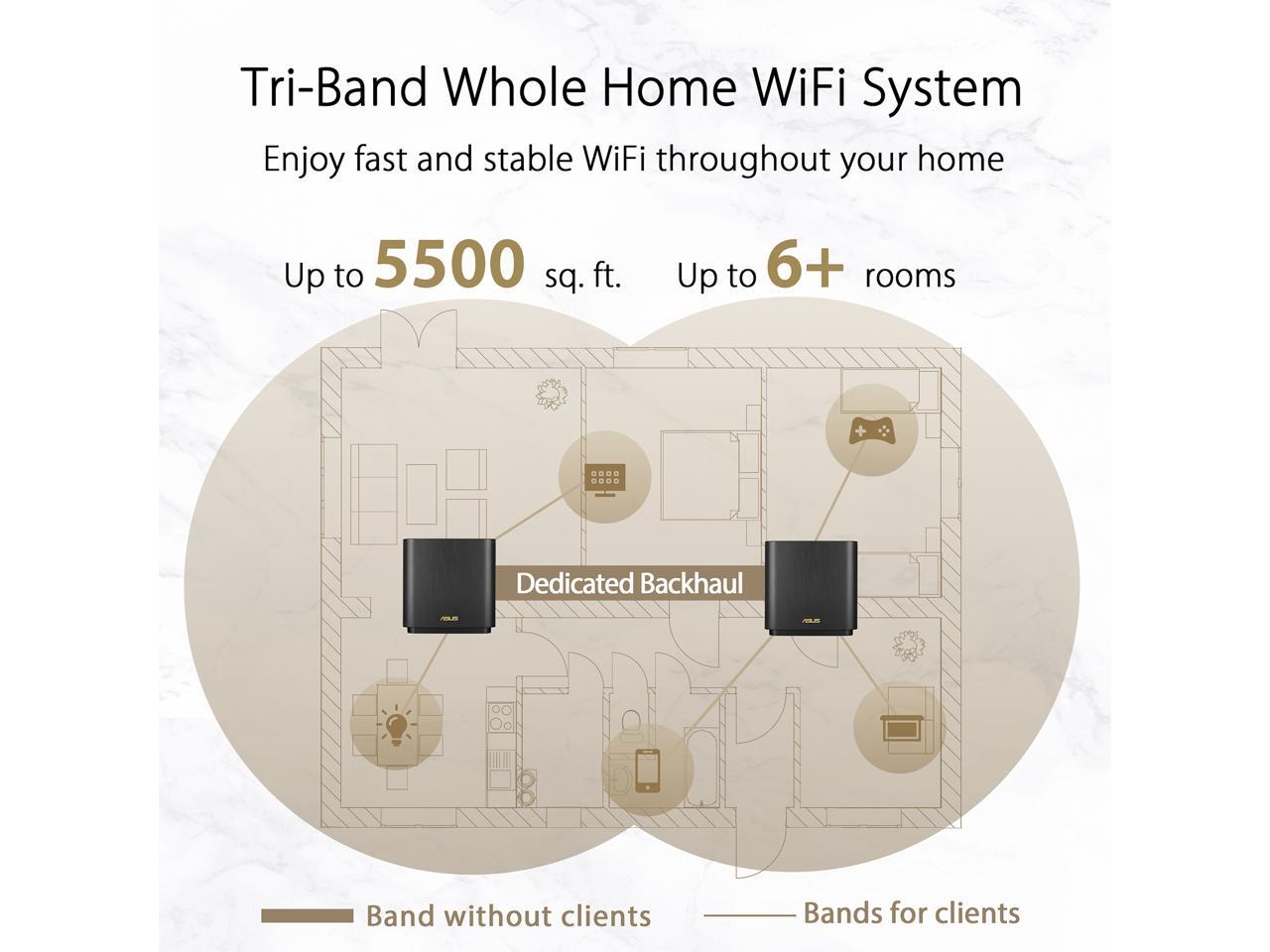 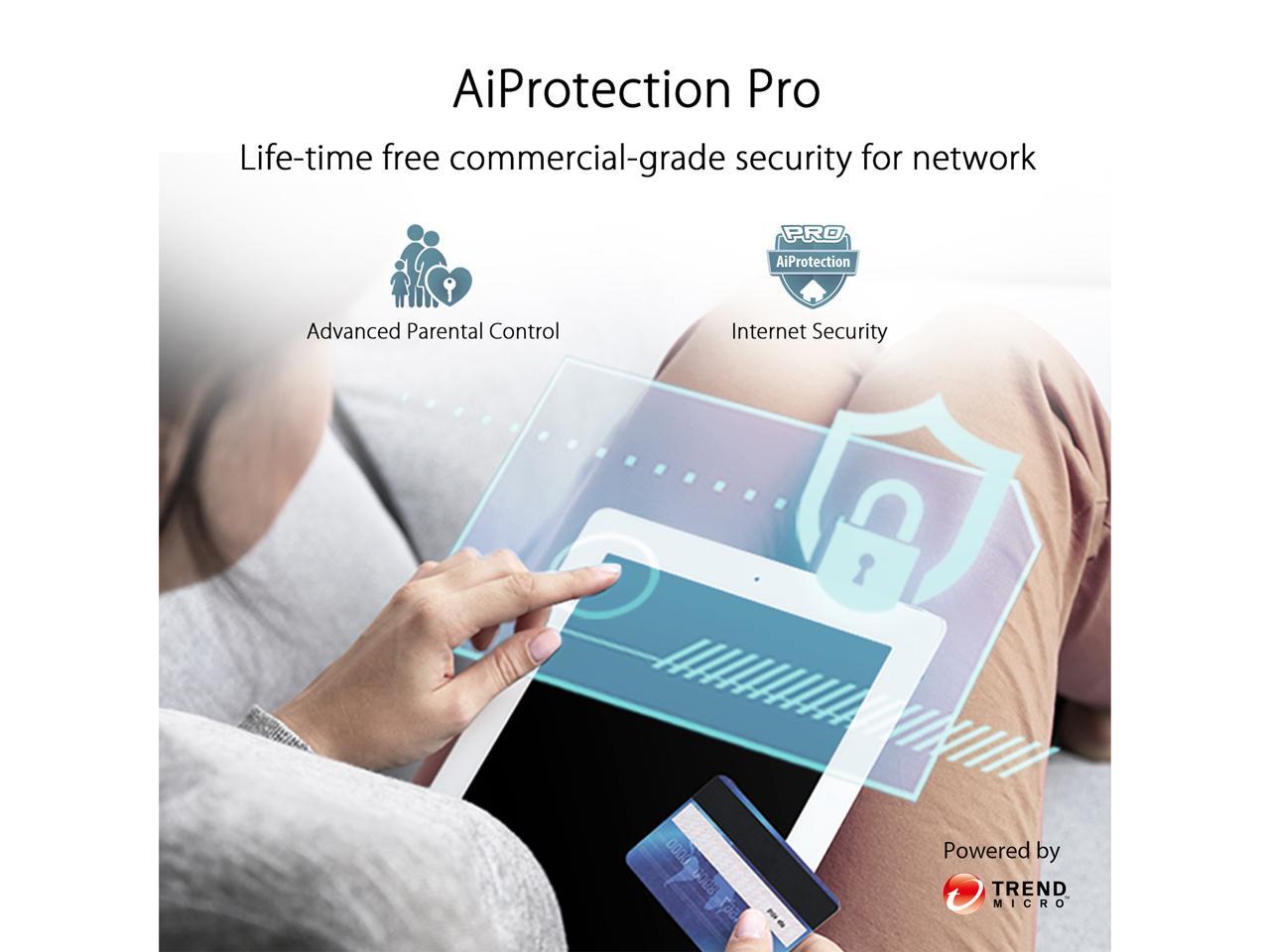 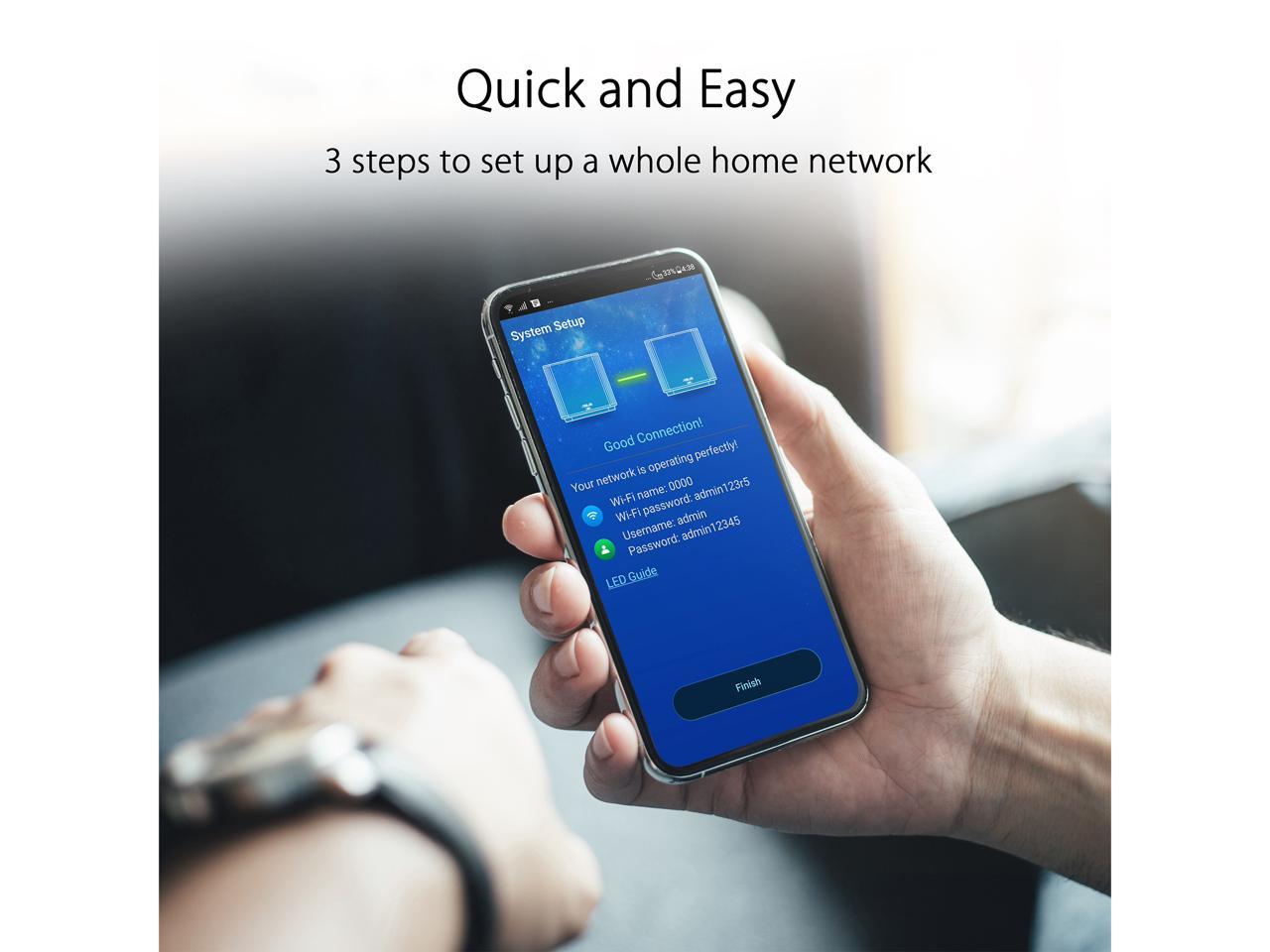 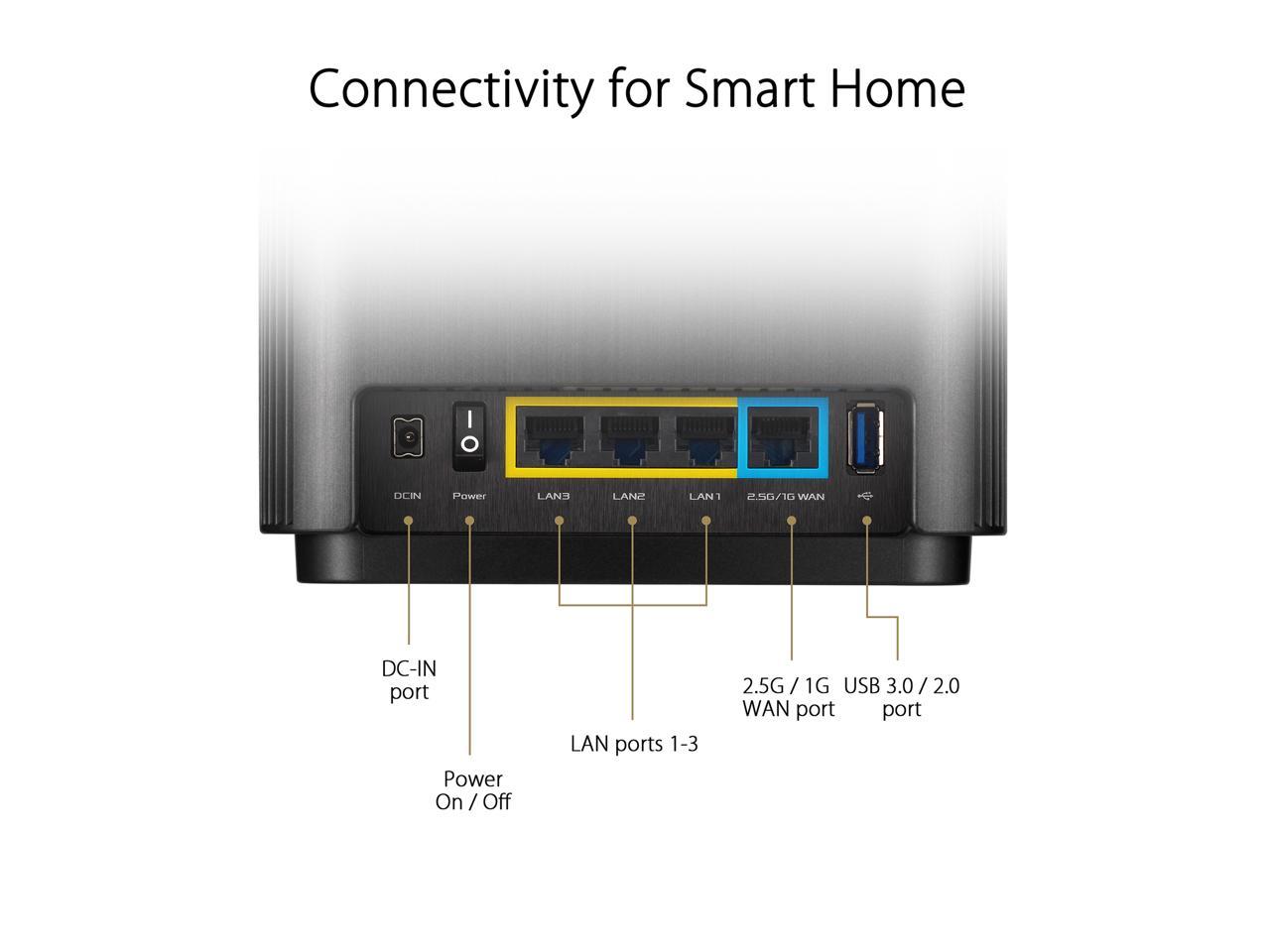 Pros: WIFI 6. I can connect my desktop to it wirelessly and get a 2.4gb connectivity which is great for games.

Cons: The Wifi signal keeps cutting out. I've upgraded firmware and checked the channels. However, it has dropout periods which made me kinda wish I would have waited. I set up my old mesh system that is about 3 years old and it's solid stable. Still trying to stabilize the Asus system.

Overall Review: Hopefully I can find out how to stabilize the new system because I like the speeds.

5 out of 5 people found this review helpful. Did you?
Manufacturer Response:
Dear Kevin G, It's heartbreaking you've encountered stability issues with your ZenWifi. Try changing the channel bandwidth of each band of 2.4 GHz to 20 MHz, and for 5GHz please select 60MHz. Test each of the channels first for improved stability. If the issues persist, please send any feedback via ASUSWRT(ASUS router Web UI), ASUS Router App, or send an email to cl-adrian@asus.com. Your case for reference is N200329217. Thank you for choosing ASUS! Best Regards, Adrian ASUS Customer Loyalty – US Support
Yaniv D.
Ownership: 1 day to 1 week
Verified Owner
Fantastic Mesh system. Amazing coverage2/3/2020 9:51:22 PM

Pros: Really easy to setup Nice App Wifi 6 coverage all over the house and beyond

Overall Review: I have a 3 stories house with ROG Rapture GT-AX11000 router in the middle floor. I wanted a good coverage especially in the basement so I purchased this system. It's so easy to set up and update (web page or App). It automatically detects if you hook it to LAN or just prefer to use the unit second 5Ghz channel to communicate. Overall, I have a full reception everywhere around my house. Love it

5 out of 5 people found this review helpful. Did you?
Jason in Charlotte
Ownership: 1 month to 1 year
Verified Owner
Poor quality. Even worse customer service. Choose a different brand!6/16/2021 11:51:20 PM

Cons: One of the two units failed to power on after only three months. A warranty claim required a frustrating RMA process and significant postage expense. The response for the claim was very slow. Asus could only offer a replacement in the color white when the original was black. Now they are insisting that before they send out a replacement that I must send in the other half of the pair, which is the only working router in my home, which would leave me with no WiFi unless I go buy another router in the meantime. This shipping is also expected at my expense. Again. This is absolutely ridiculous!

Overall Review: I do not recommend this. This is a poor product with horrible customer service. Stay away from Asus and spend your money elsewhere!

2 out of 2 people found this review helpful. Did you?
Manufacturer Response:
Dear Jason, We appreciate your feedback on this matter, and I will be letting the related department know about the issues you are experiencing for continuous improvements to ASUS Support. Should you need any assistance with your RMA, You can reach me at cl-adrian@asus.com. Your case for reference is N2012037979-0002. Thank you for choosing ASUS! Best Regards, Adrian ASUS Customer Loyalty – US Support
Anonymous
Ownership: 1 month to 1 year
Verified Owner
Easy setup, useful extra features11/16/2020 7:50:37 AM

Pros: - Setup of the mesh nodes is very easy using the smartphone app - Smartphone app is also useful to check network configuration and stats - Each node has a USB port for sharing a USB disk or printer - 4th ethernet port on back of node can be used either to connect to the outside internet or as a high speed LAN port

Cons: - Installing a smartphone app isn’t really something I like doing. If you’re even more uncomfortable installing manufacturer apps on your phone, check for alternate setup instructions using only the network interface. I’ve used the LAN web browser interface to the mesh nodes for all management tasks except adding new nodes. - If you want to share a USB device from a node other than the primary node, you have to use the LAN web browser interface. There doesn’t seem to be a way to directly configure the USB sharing on other nodes except by going into the AiMesh section of the web interface, selecting the node that has the USB device connected to it, and configuring that node’s USB app. - There’s no way to manually configure the mesh topology. The nodes will connect to each other to provide good service, but you can’t easily tell them which other node to connect to if there are multiple good options.

Overall Review: I have an awkward house arrangement, with my only broadband connection location in the living room, but a need for best possible connection in the adjacent office, and also a desire for good service in a rec room at the other end of the house with a lot of walls and a floor in between. I bought one pair of ZenWifi AX nodes initially, with one in the living room at the broadband modem, and one nearby in the office with my work computers connected to it via ethernet cables. Setting up the nodes was extremely easy using the ASUS Router smartphone app, although I was hesitant to install the app. (I have no specific reason to distrust the app, I just am reluctant to install apps on general principles.) Once I had the two nodes set up, it was also the usual simple plug-and-play operation connect my office computers via ethernet, and the system has worked without trouble since then. The only issue I found with my initial two-node network was that, because my broadband and office setup required me to put both mesh nodes on the same floor near one end of the house, the far corner of the house wasn’t able to get my full broadband speed over wifi. After unsuccessfully attempting to get my old ASUS RT-AC68P wifi router to participate in the mesh, I decided to just buy an additional pair of ZenWifi AX nodes. Adding these nodes to the mesh was even easier than setting up the first two nodes. I placed one node to cover the part of my house that didn’t get full network speed (it does now), and positioned the fourth node to cover the back yard, just for fun. The nodes made some odd decisions about which other nodes they connected to, but I attribute this to having more nodes than I need for mesh considerations alone, which leads to there being a lot of different good mesh configurations possible. It bothers me slightly to have a weird mesh topology, but in practice it hasn’t caused trouble. I also have a disk of data that I want share with my household. For various reasons the best place to put disk is in the office. I initially connected the disk (a USB3 external hard drive with a single partition formatted with a Linux ext filesystem) to the office node and its directories showed up as Samba network shares. Success! Unfortunately I couldn’t actually access the shares, and the USB app I was working with didn’t see the disk to set up access, so I gave up. A week later I was looking around in the LAN web interface of the primary node, and noticed that I could access the USB sharing app on the other nodes by going to the AiMesh section of the web interface, then clicking on the individual node. I was able to set up the USB network share properly from there. The only other issue I encountered was that I had to change the permissions on the files and directories on the disk to world-readable/writable as appropriate. Rather than try to figure out how to do that through the web or Samba interface, I just disconnected the disk temporarily from the mesh node and did it from my PC instead. I now have all the functionality I was looking for. Overall I am quite happy with my mesh network. The control interface isn’t awesome, but I can do what I need to with it. It’s serving about ten devices, with video calls, Netflix, and web browsing happening simultaneously with no issues. I’m also pleased with the dedicated 5GHz-2 backhaul between the nodes because it helps me be confident the mesh will stay free from interference even with a lot of client devices. These nodes are a little expensive if your situation requires more than a single pair of them, but they work well.

Pros: Easy setup, significant improvement in signal coverage throughout the house and on outside deck and front porch. Allows for wired connection from the LAN ports on the units. Very stable with no drops in service over the past 6 weeks (since installed).

Cons: NONE! If you are looking for increased coverage, this product is highly recommended.

Overall Review: Decided to add 2 more Asus Aimesh Nodes to my 6000 plus ft. house .Setup is Main Router Ax11000 and 2 Ax92u hardwired with Cat6 cable from Nighthawk SX10 Switch now with New ZenWiFi xt8 finally able to use 2.5g lan ports on Nighthawk SX10 switch .All seems Stable and Coverage is Extremely Good, Samsung s10 plus connecting at 1.2gb even at 100 ft from Nodes .lenovo using Ax200 wifi card is at 2.4g and Stable .One drawback is even tho Aimesh nodes connect via Cat cables still seems like it Wants to use the 5g second channel as preferred even after setting Config in Ax11000 Aimesh settings to Wired .Asus needs better Gui for Aimesh. Overall happy so far

Pros: This is a major improvement in my home WiFi system. I like the fact that the mesh network presents as a single system, rather than two separate systems like I had before to accomplish the coverage that I wanted. Set up was quick and easy with the smartphone app, and the browser interface for more granular system management is easy and intuitive. Order fulfillment from Newegg couldnt have been better or faster.

Cons: Theres a major gotcha on the process to use WPS for legacy client devices: I managed to reset the network name and password to factory default after I had already added a number of wireless clients to the network. This should be a two step process, with an are you sure? question/response required.

Overall Review: I would absolutely recommend this product for a home WiFi system.

Did you find this review helpful?
Anonymous
Ownership: 1 month to 1 year
Verified Owner
Functions as expected, but beware possible cosmetic hardware defect9/15/2021 7:48:37 AM

Cons: The top of the device is just a sticker. I've only had mine for 3 months and the sticker is starting to peel off (photos attached). I expected sturdier hardware / better design at this price point.