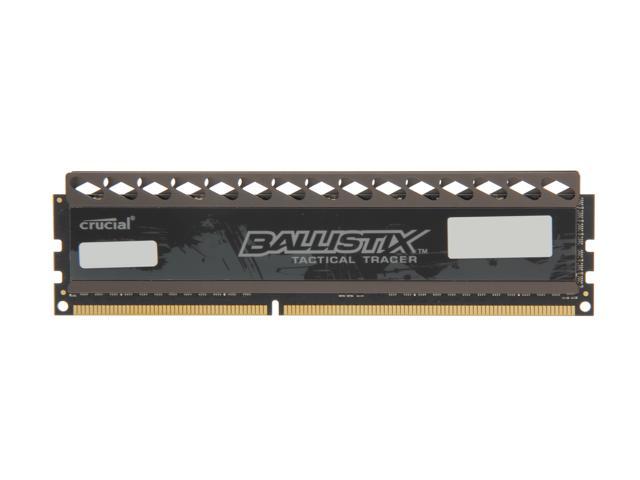 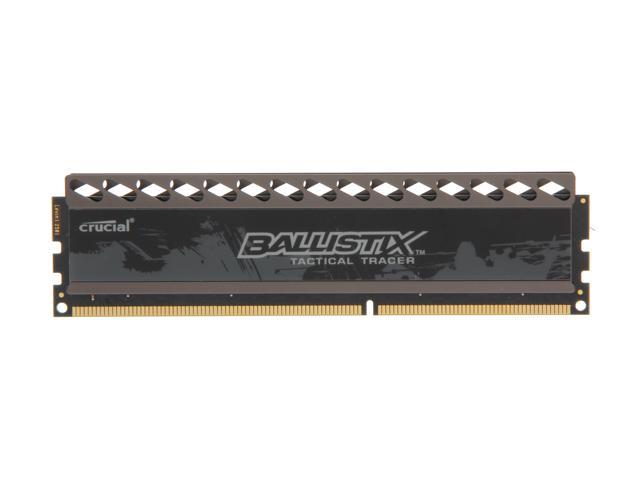 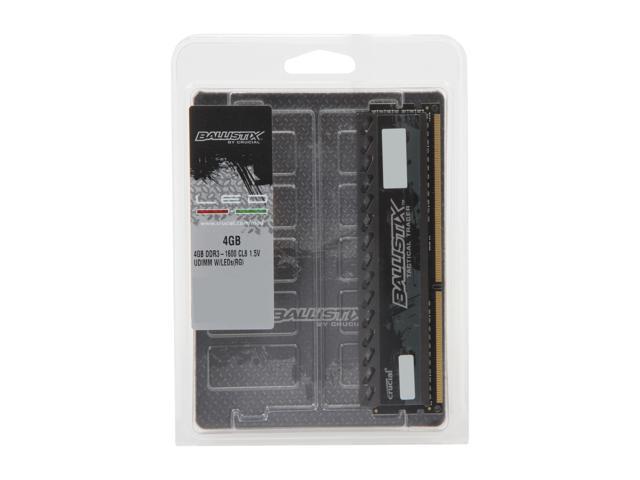 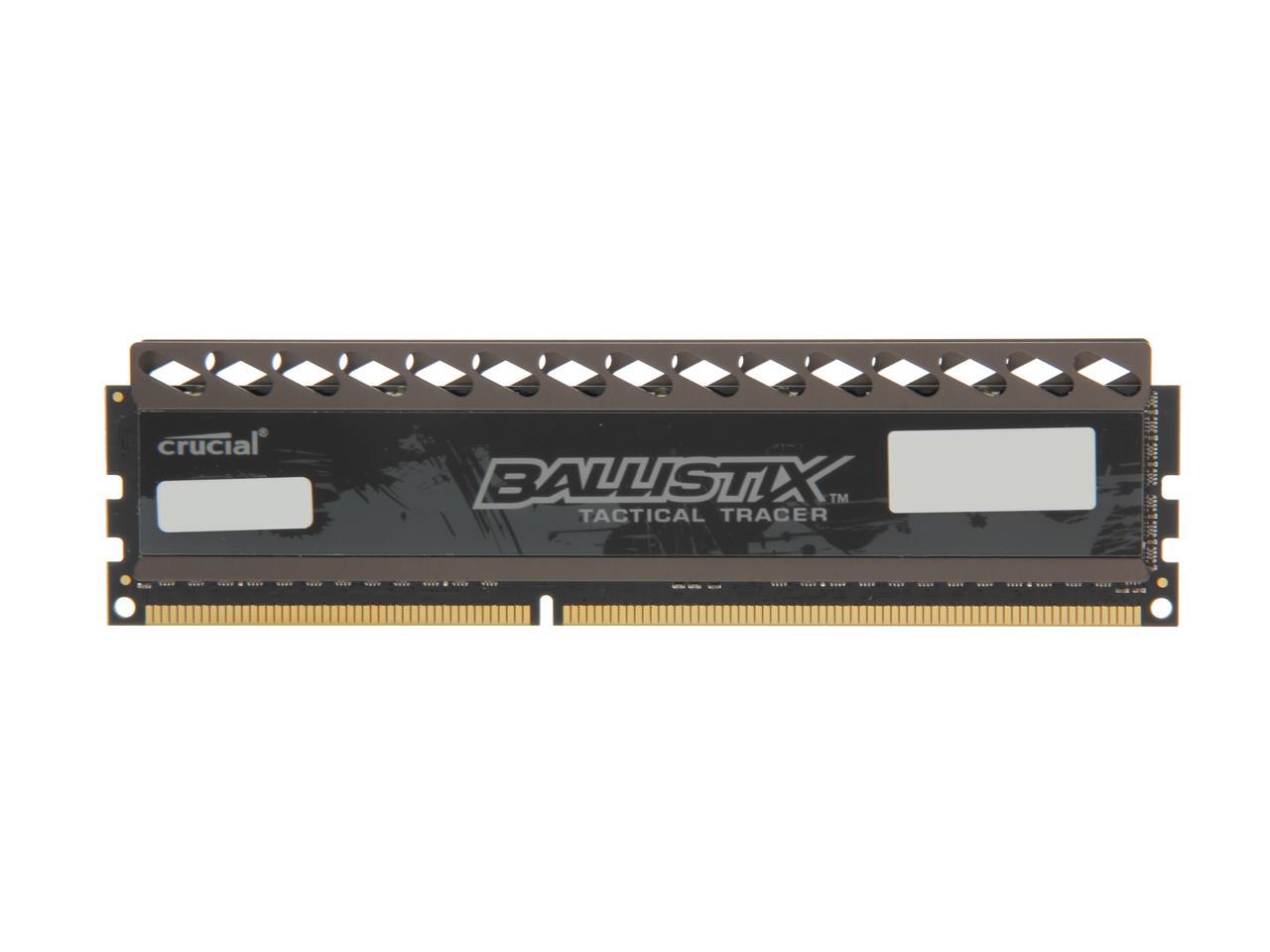 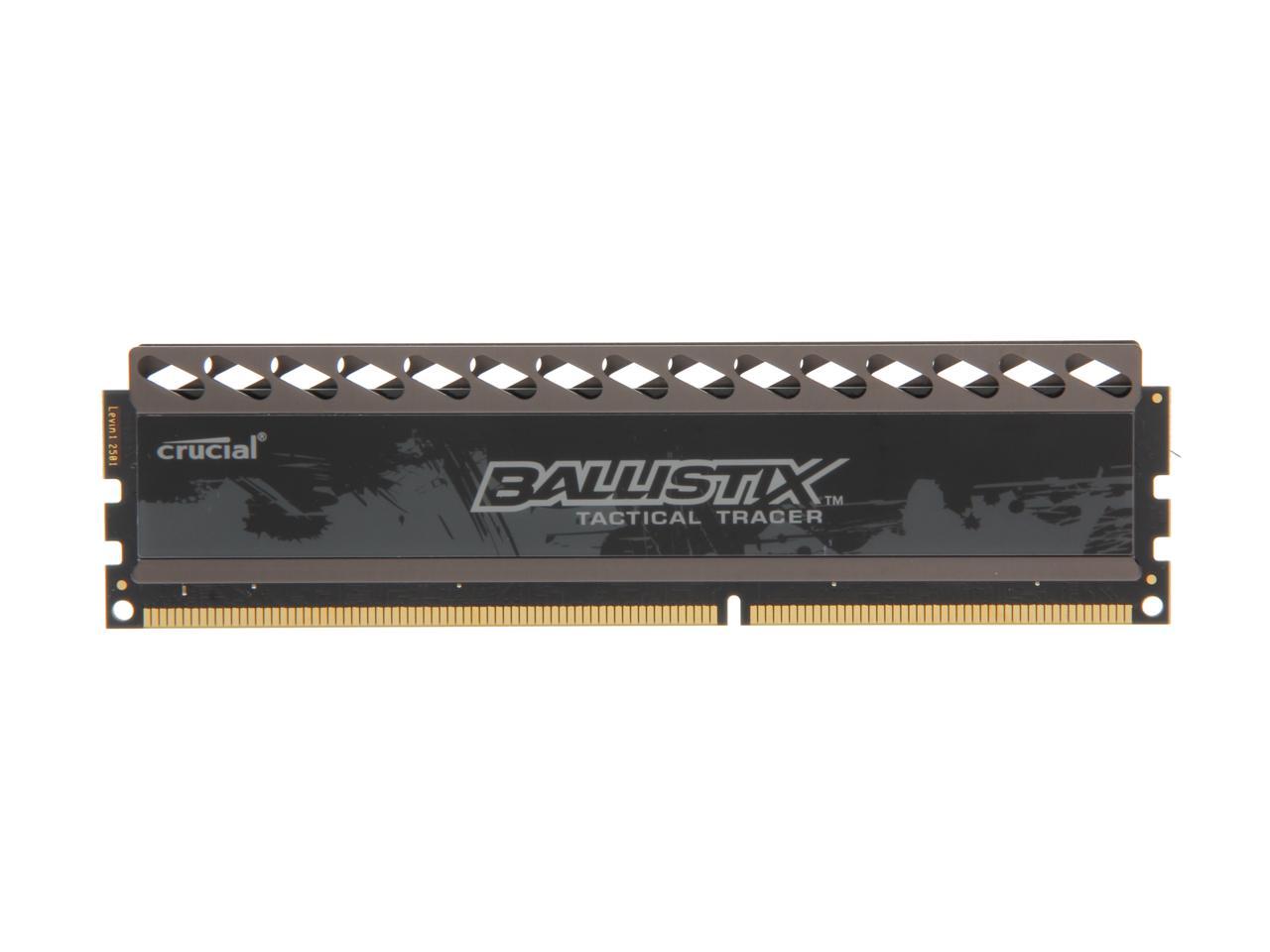 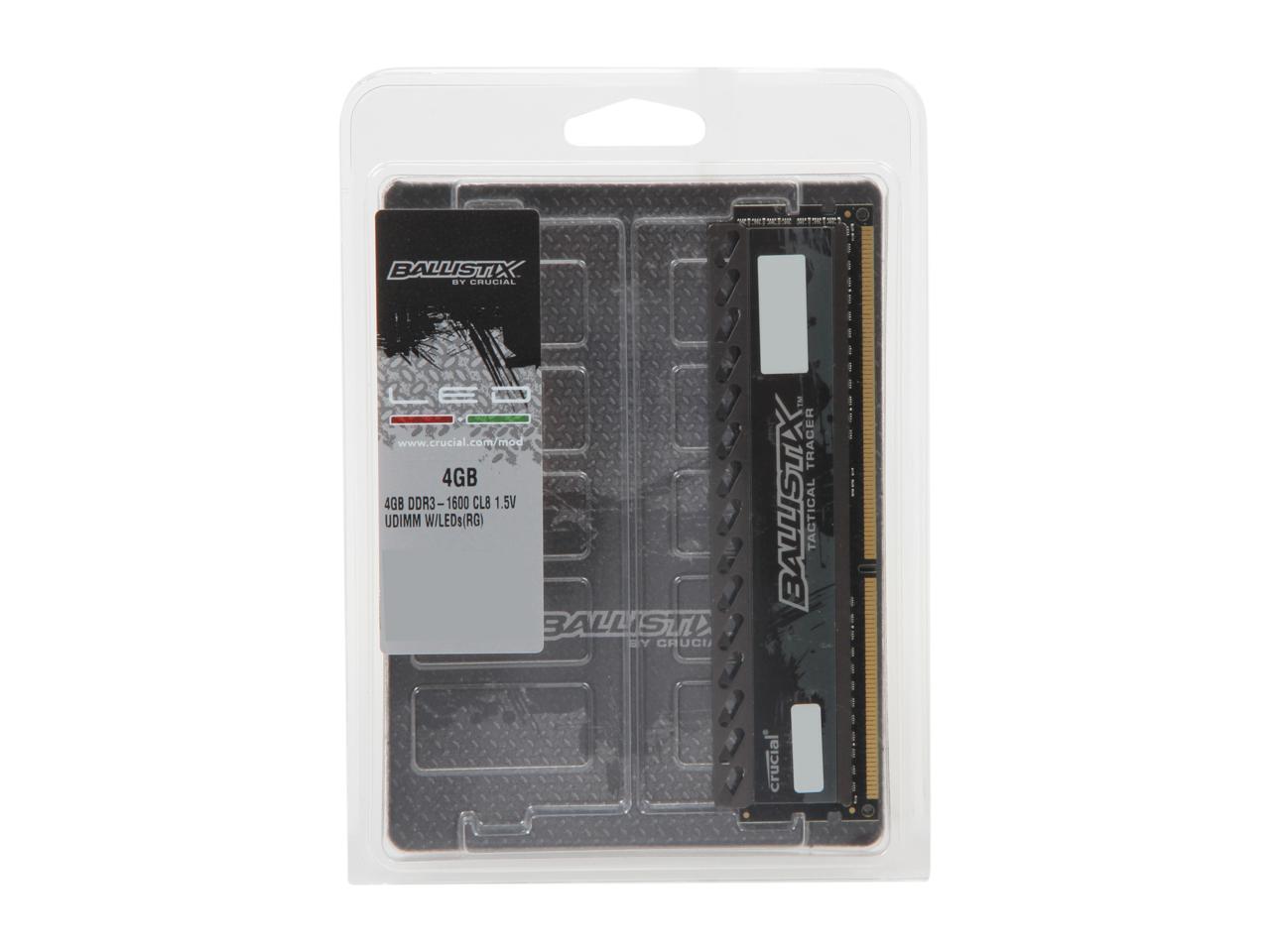 The Ballistix Tactical Tracer Series Memory not only provides the performance you want but also boasts aesthetic design that makes your system look good. It’s a great choice for case modders, serious gamers, or PC enthusiasts who want to get more out of their systems. Give Your System Some Bling

Tactical Tracer modules feature LED lights and thermal sensors, which allows the custom M.O.D. software utility to monitor temperatures and customize the LED colors and patterns that play out across the module. Touting all the usual features of the Tactical series – XMP profiles for advanced speeds and timings, stylish black PCBs, and a custom heat spreader for improved thermal design and heat dissipation – the Tactical Tracer series is designed to add some serious bling. Light up Your Game

With the integrated and customizable LED light system that’s built into every design, Tactical Tracer modules feature activity-indicating LEDs on the top edge of the module to reflect your system’s activity level, while ground effect LEDs emit steady light. Switch between red/green and blue/orange LED color combinations on the fly to get a customized look and display. All in real time, you can adjust the brightness of the LEDs, turn them on and off, and adjust LED light patterns. M.O.D. Out Your System Crucial – Quality You Can Depend on

Crucial is a trusted name when it comes to DRAM, and that’s no coincidence. As a brand of Micron, one of the largest manufacturers of DRAM in the world, Crucial’s engineers design, refine, test, manufacture, and support the extensive line of memory modules. To ensure that you get a reliable memory upgrade, they test every single Ballistix Tactical Tracer module in the Systems Compatibility Group to make certain that it meets the exacting specifications. If it doesn’t meet or exceed the performance levels that were advertised, then it doesn’t leave the doors.

Learn more about the Ballistix BLT4G3D1608DT2TXRG

Pros: No defects in the 4 sticks I bought. Stable and cool (~38 deg. C) under the Passmark stress test. No trouble running at advertised speeds on an Intel DZ77BH-55K mobo. The "Mod" utility (www.crucial.com/mod) works well and doesn't need to be memory resident or even installed after the LEDs are to your liking. The utility lets you control the colors and patterns of the individual sticks of RAM. I bought a pair of red/green and a pair of blue/orange, and together I can make the inside of my case look like a psychedelic rainbow (if I wanted to). There are LEDs pointing down and up. The downward LEDs are always steady on. The upward LEDs are the activity LEDs that move around due to memory activity. The downward and upward LED sets each have their own color option. So, for example, you could light up the motherboard red and have the activity lights be green.

Cons: Not really a con, but it did make me nervous to push on the heat sinks in order to seat the RAM. There was no other way to do it as far as I could tell. It didn't cause a problem though. Apparently Crucial uses a strong adhesive!

Overall Review: Note that these are the red/green sticks (hence the RG at the end of the product code). There are 4 LED activity patterns to choose from: 1) Lava - LEDs seem to go crazy at this setting, blinking on and off rapidly and randomly. 2) Stereo - Think "stereo equalizer". You get "steady on" lights in the middle of the RAM. They bounce outward (and back in) rapidly during activity. Kind of a cool effect. 3) Stream - Think "wave". Lights move in one direction, like a wave. Wave moves faster with more activity. 4) Inside out - Like the Stream mode, but lights start in the middle and move outward toward the edges.

Pros: This RAM has low latency, low voltages and BLUE LED's (The version I eventually received) This model has Red and Green

Cons: The price fluctuates too much.

Overall Review: Ok so here is a testament to customer service. I have been buying Crucial Ram for a long time and never had any issues what so ever, my first interaction with Crucial was as easy as it could get. So I purchased this RAM from NewEgg on March 19th and slowly started to accumulate parts for my new RIG upgrade. When I finally had the parts and time needed to test the components it was April 27th. When I did the test run the LEDS on the RAM were green, I really didn’t worry about it too much because I figured that once I installed the Crucial M.O.D utility, I would be able to adjust the LED’s to the color of my choice. I waited about 2 more weeks and finally had the time to put the parts in my Corsair 800D. After a full installation I became quickly aware that these were not Blue and were the GREEN/RED version. Everything I have is blue and I’m borderline OCD so I had to have BLUE. I was also willing to pay 139.99 for my RAM vs 99.99 just to have the LEDs. I was really upset and was wondering how I made such a stupid mistake. I came back here and combed through every word possible on the product info NewEgg provided. The LED color was nowhere to be found. It only listed it as customizable LED’s with the Crucial M.O.D utility. So I called New Egg with a lump in my throat and they accepted the RMA and paid for the shipping. I am a premier member but I think they would have done that for me anyway to be honest. I had two issues with this outcome, first Newegg dropped the price to 119.99 with free shipping and secondly they were out of stock on the Blue versions. So I pulled Crucial into the loop, I wrote them an email explaining the situation and they totally backed me and agreed to process the RMA for me. To be completely truthful, I was shocked. I didn’t have to get upset or argue. I just explained the situation, gave them the link to NewEgg’s page and they agreed that it was confusing as well. I don’t know if it helped my situation but I also reminded them that this is one of those opportunities to hit a customer service home run and they hit a grand slam instead. I got the Blue LED kit and after it was all said and done I paid 125.00 for it.

Pros: Fantastic memory. Has some room for overclocking (XMP etc.) The real appeal of this is the visuals though. I ordered 3 of these, combining with my old RAM to total 18GB, and man is this a huge difference. Most computers won't need this much memory, but from the multitasking and editing I do, I was happy to break my old ceiling of 6GB straight into the sky. There are various light settings, and patterns to choose from, and it goes well with my set up. The lights generally are affected by access and RAM usage, which makes things interesting.

Cons: Not enough customization settings... I wish you could have different "scenarios" or triggers for the various color and pattern settings (such as utilization %s etc.)

Overall Review: This isn't Cruicial's fault, but why did my order take 15 (!!!!) DAYS TO GET HERE!!!! It's not like I live in Hawaii. I ordered some coolant from a nobody company and got it the next day, and for the same shipping price, yet from Newegg it took over two weeks for this purchase? I'm furious, and probably looking elsewhere in the future.

Pros: Leds work flawlessly and memory is fast and reliable running on a Asrock FX990 Extreme 4 motherboard. The people that are complaining about short lifetime and dead leds are more than likely not using static electricity precautions. I have bought more than 56 sets of these over the past 2 years and all are still working.

Cons: Price just keep going up! Bought my first ones at 50 a pair a year ago.

Overall Review: You must use anti static protection on your body or they will be destroyed as soon as you touch them and when removing them from their package also cause static. Even at an undetectable level you will get static discharge at a minimum of hundreds of volts. Not detected due to hardly no current. Walk across a carpet and touch a door knob and you got 17,000 volts of a spark that you can see and feel.

Pros: Yeah, it's kinda rice like an aluminum wing on a Civic, but I like it anyways. With this ram installed, my PC reminds me of WOPR which makes me all warm and fuzzy inside because I feel like Matthew Broderick! Working perfectly using XMP in ASUS Z97 Pro w/ a i5 4690k and 2 970s in sli, MOD software runs well, also. (Windows 8.1)

Cons: One LED on each stick was bad on first boot. $#!T!!! In the center on one and out towards the edge on the other. The defective LEDs were extremely dim on both colors and it didn't matter if the MOD software was installed or not. After running some stress tests on the CPU that involved a lot of ram testing, all lights are now working perfectly and have been for a couple weeks now.

Overall Review: If you get one with a wonky LED, try running prime95 or something to heat up and break in the ram. Worked for me!

Pros: it is stable on a asus saber-tooth z87 board LGA 1150, the leds look good when turned down just a notch. It is also prime95 stable overclocked ABOVE XMP 1600 specs. on the same board running a corsair ram cooler.

Overall Review: for me i had to turn the leds down just a little bit using the mod utility, this is not really a con because they are adjustable with the utility that you can get from crucial's website for free

Pros: - I have three of these running at 1750MHz 8-8-8-24 @ 1.65V, and they have been flawless. (I run at 1.65V because my older memory that is also installed requires it) - The modules have Blue and Orange LEDs (see other thoughts) - The brightness and LED pattern can be changed using the MOD utility

Cons: Potentially, the heat spreaders could be too high if you have a CPU cooler or something that is right over the memory banks. These heat spreaders aren't excessively tall, however; they just barely come above the PCB.

Pros: The Lights are cool and the timing is nice too. I got to order my second set for my pc (im on a budget) and I saw the guy below thought that his ram was not working correctly. You need to download the Ballistix MOD Utility to change the colors, patterns, or brightness or the lights on the ram sticks. You can even turn the lights off also though not sure why you would want to. This link here is for the mod program from Crucial. http://www.crucial.com/ballistix/bl-mod-utility.aspx

Cons: The factory settings is really rather bright for the ram sticks. Seems like Crucial would have added something to the package to get buyers attention to download the mod utility.

Overall Review: Seriously this is adds some cool lighting.