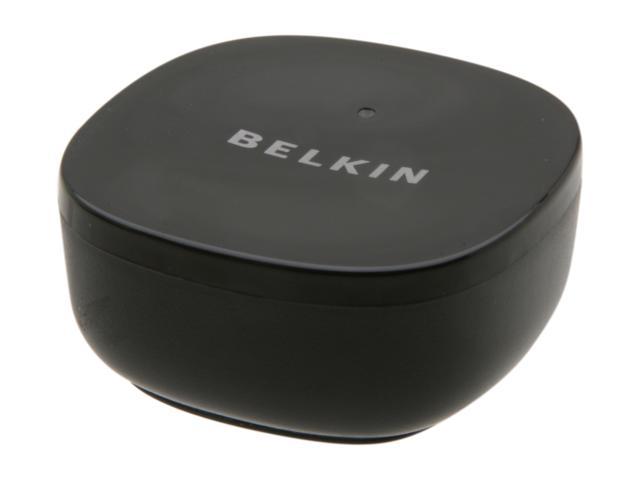 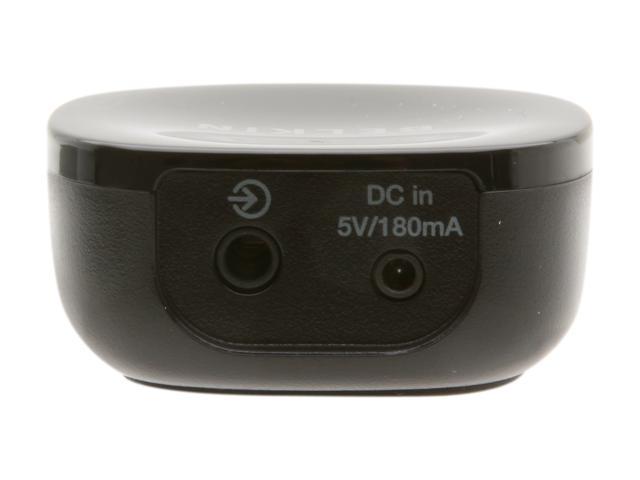 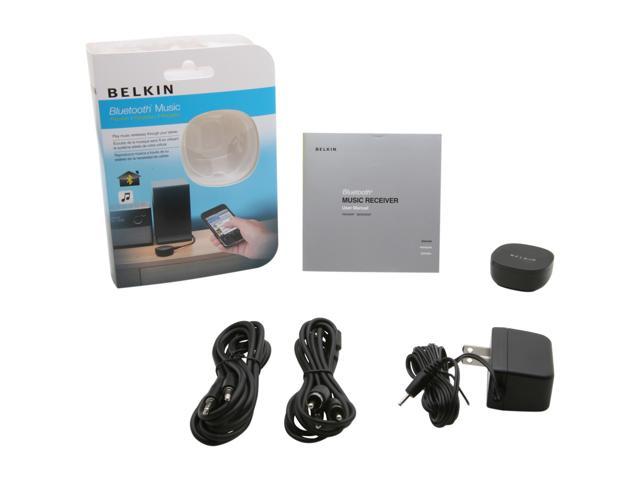 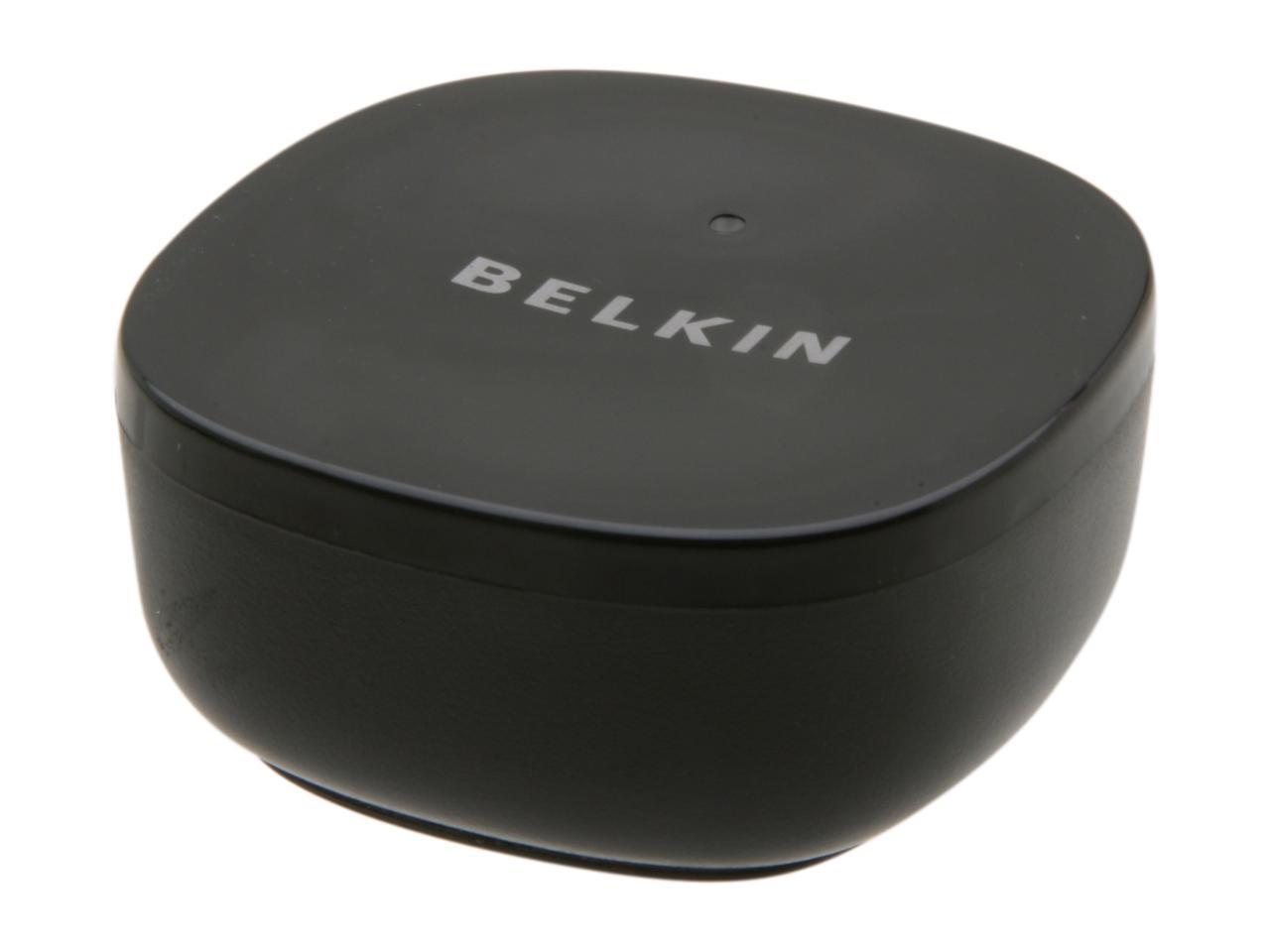 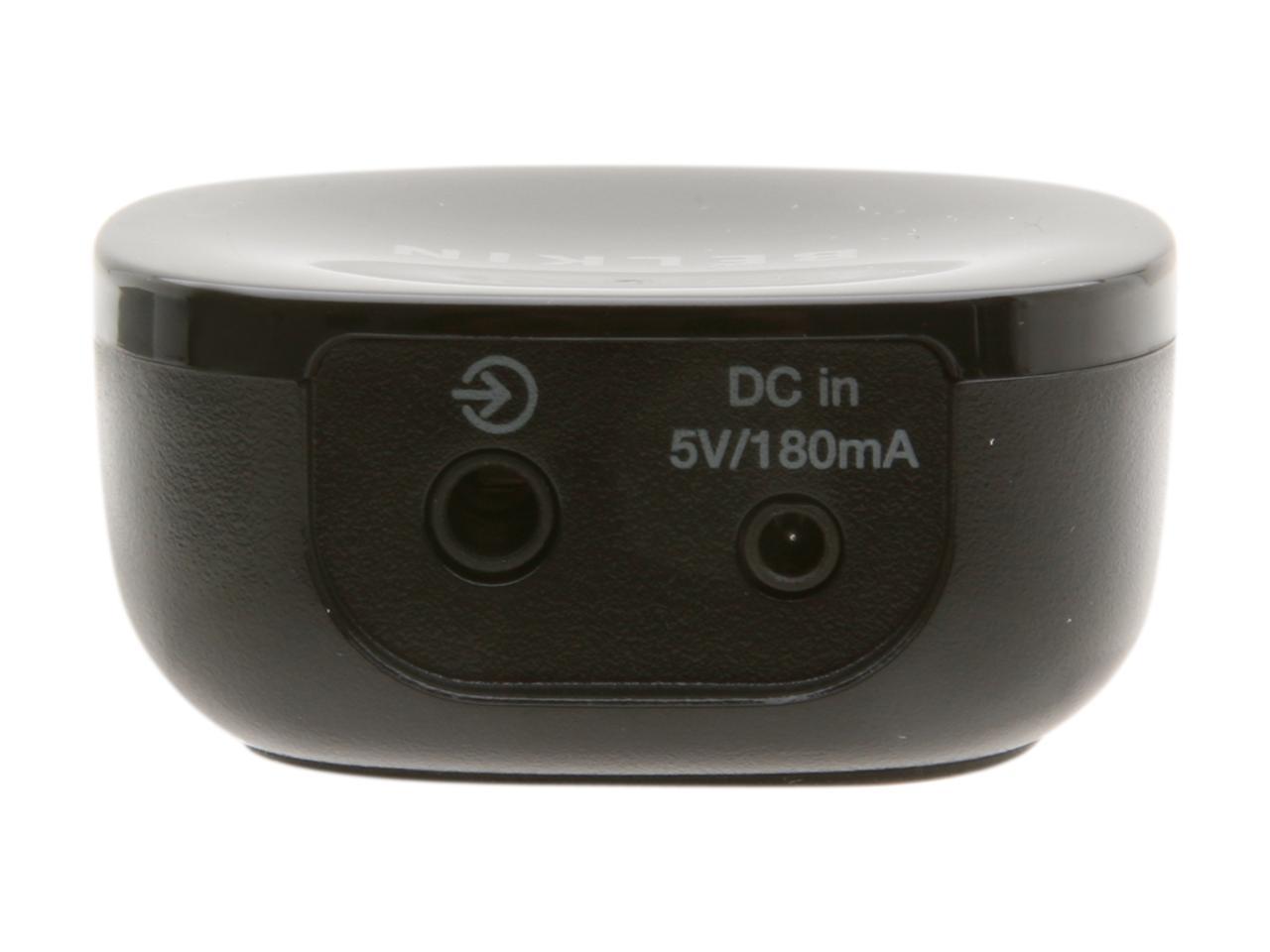 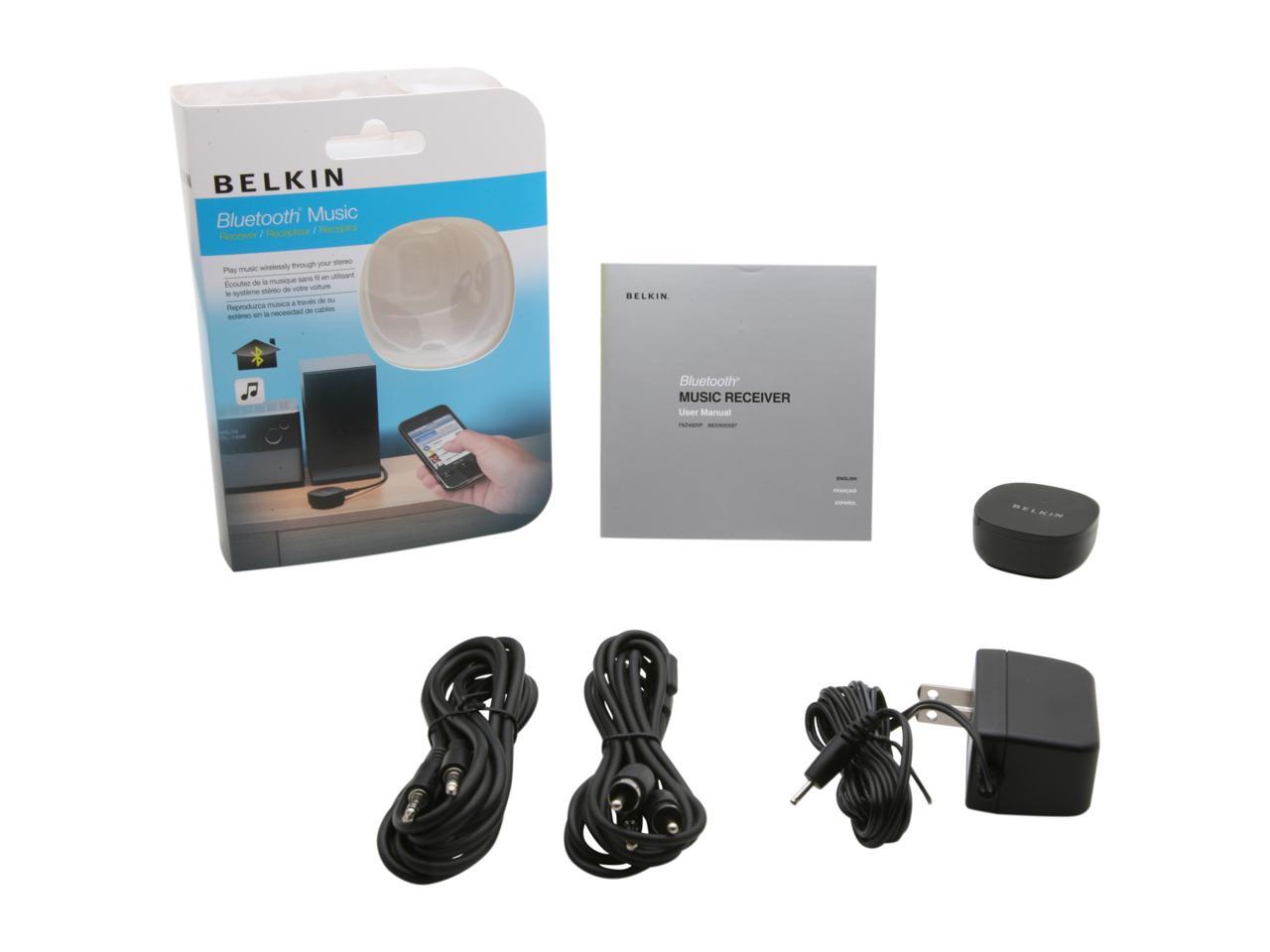 (123) Write a Review
OUT OF STOCK.
Overview
Specs
Reviews

Learn more about the Belkin F8Z492ttP

Pros: Bluetooth connectivity with most any device. Easy enough to get going.

Cons: Sound quality is less than optimal, but is decent. For me, it is a sufficient trade-off for no wired connection.

Overall Review: Does what is advertised...for cheap! I'm quite happy. Works with my Android phone and computers.

Pros: A couple of notes to start: I am an EggXpert reviewer, but this item was not part of that promotion. This was a fully personal purchase. Second, depending on what people's expectations are and what device they are pairing with this unit, the Pros and Cons could go either way. So I'm just going to write this review top down, using the 3000 character allotment of each section. First, the size of this unit was quite a bit smaller than anticipated. It measures 1.75" square and just over 3/4" high. For you metric people, that's 4.5cm square and 2cm tall. It comes with two separate audio cables: a standard 1/8" stereo Male/Male and a 1/8" male stereo to L/R RCA male. And the power adapter ("wall wart") is small, but depending on the orientation of the electrical socket, it may pose a problem. Plugging it into a standard stacked wall socket, it sticks out to the side without blocking the remaining outlet. However, if it's going into a powerstrip with all the outlets perpendicular to the strip, then you're going to covering up the next socket or you're plugging it in on the end so it can extend beyond the strip. My testing for this unit comprised of a full range home stereo with an existing line-in already run for my iPhone 3G that nows just serves as an iPod. (I used my iPhone 4S in place of the 3G for intial testing.) I then created another line-in with the same type cable (1/8" stereo <-> RCA males) from the Belkin package. This allows me to be plugged into the headphone jack as well as have a BT connection. All I need to do is switch between the two outputs on the iPhone and select the other input on the reciever. This allows for nearly instant switches (Left hand selecting output, right hand selecting input source) for judging audio quality. Right off the bat, the output signal on the Belkin is a few decibels less than the iPhone headphone jack. With the iPhone, it remembers the selected volume level for each output, so I kicked up the iPhone volume two clicks for the BT connection so it was as close to the same level as the headphone output when I would do the live switch. Besides listening to a variety of music (Jazz, EDM, Classical, Pop), I also used a tone generator. At the same volume level, the is NO appreciable difference in audio quality. I'll explain later why people say they hear a difference (Hint: it's their source device's BT chipset, not the Belkin.)

Cons: The next question on everyone's mind... Distances! How far can you go? This unit is very much "line of sight" oriented. With a clear line of sight, I was able to achieve consistently solid audio connection at 37ft. At 38ft, I'd start to get occasional dropouts or full dropout if someone is standing in that line of sight. I'm impressed because the manual says the max distance is 30ft, but I got 37 out of it (with direct "line of sight"). If obstructions are in the way (humans, walls, upstairs/downstairs), the distance drops off dramatically to just a 14ft radius. To test the upstairs/downstairs part, I put the device on my window sill and walked upstairs to the window directly above. No signal loss. As soon as I started out of the room towards the stairs, there was occasional signal drop until I got back within the 14ft radius or back into "line of sight" again. Also to note, I tested "line of sight" from all sides of the Belkin. There was no discernible difference whether it was flat on a surface or stood up so the either the top or bottom was facing me. There's talk of people increasing range by removing the metal weight or something in the device. I don't think it's going to make any difference since the unit's signal, while still "line of sight" preferred, appears to be omnidirectional. "Why are some people complaining about the audio quality when connected to the Belkin?" To check this, I performed the exact same tests using my iPhone 3G, iPhone 5, and a Samsung Galaxy 3S. The usable distances never changed, but there was significant difference in audio reproduction between the 3G and the iPhone 4S, 5, and Galaxy S3. As noted above, the 4S (and iP5 & S3) had no quality difference between headphone jack and BT output, whereas the iPhone 3G was very much compressed sounding. It sounded like it was going through a digitizer, giving it a buzzy, tinny sound. I disconnected/reconnected multiple times from various distances and it didn't make any difference. So I firmly believe that when people hook this up to a quality audio system, if your BT audio doesn't sound good, it's likely your device. Other tidbits... The manual says this device can handle up to 8 devices AND has a passcode. My device only allows one device at a time and did NOT ever prompt for a passcode from ANY device. When a device is connected, there's an unobtrusive blue LED on top that lights up. Also, when there's an active connection, it will not show up as discoverable.

Overall Review: So with all that being said, what's the bottom line? NewEgg had this on sale for $30 - $5 promo code, taking it down to $25. On top of that, there was a $15 NewEgg gift card mail-in offer effectively making this unit $10. (Since I'm always buying from NewEgg, I'll certainly be using the $15 gift card on something else.) For $10, I think this is a solid buy and I'll be very happy with it! However, it's caveat emptor ("buyer beware") if you are using any other phone, as I can only comment on the exellent audio reproduction of the iPhone 4S & 5 and Galaxy S3. Since I'm very much a music person and can't stand listening to noticeably deteriorated audio, I don't know if I'd buy it to use with my iPhone 3G, even at a $10 sale price. So for that, I'm going to knock off an egg. What remains is a solid 4-egg unit as long as you go in knowing the limitations.

Pros: Wonderful. My galaxy S III sounds great thru this device. Belkin is a good company.

Overall Review: No more wires. My wife likes that.

Pros: Does what it says. It will receive audio send via Bluetooth from phones, MP3 players, etc... not just iPhone and iPods.

Cons: Bluetooth Stereo Audio sounds horrible. Belkin isn't to blame here. It's the Bluetooth A2DP audio standard. It's very bandwidth limited; high frequencies are muffled and shimmer badly. Everything sounds like it has an echo a few milliseconds later. The whole audio spectrum is full of very audible audio artifacts. Don't consider this device if high quality sound is important to you, and use a wire instead.

Pros: It actually does connect to the iphone, which is why I gave it one star.

Cons: Everything else. The sound quality of this device is atrocious. I mean like....turn your $500 speakers into cereal box speakers. It's terrible. Sounds like it clips 30-40% of the actual acoustical data it's being fed. Do not waste your money or time on this. It will leave you feeling duped.

Overall Review: Just Don't Do It.

Pros: BT audio receiver that works while plugged in (I don't know why other manufacturers don't make it that way).

Cons: Very bad DAC: lots of hiss, no bass, unclear treb, etc. the $0.50 pocket radio that I got in Vietnam sounded better. This completely negates the use of this for music in the living room. I realize that BT audio is lossy compressed, and yes, I can hear that difference, but i can live with that, _not_ with a bad DAC. I tried pairing the same phone with a (similarly priced) JABRA CLIP, and the Jabra sounded much better (BT Audio compression taken into account, of course).

Overall Review: Belkin engineers or marketing guys responsible for product documentation needs to know that Apple products are not the only things that has A2DP.

Pros: It worked out of the box..... its nice looking

Cons: the range is not 30+ feet, it's more like 10 feet. the audio quality is horrible, adds a metallic sound to everything. went on alot of blogs and found that alot of people have the same issues. I took the metal plate out of it and now the range is 30 feet through walls or anything. but still sounds like its in a flimsy metal tool shed. You cant hook it up to computers, they think it is a Bluetooth headset. I tried this on 4 stereos with different cords and you still get a muffled metallic sounding music. i would not buy this item if i could go back in time.

Overall Review: Don't buy it. i bought a usb powered Bluetooth receiver on a bidding site (newegg doesnt alow me to put who for some reason but they start with e and end with y) for 7 bucks that sounds better than this. Shame on you Belkin... lots of people have the same complaints, that means everyone of these have the metallic sounding music and I could through a bowling ball farther than it can receive a signal. and at 25 bucks it not work sending back for a new one that will do the same thing. If you do buy this take the metal plate out of the bottom to increase your range by 3 fold.

Pros: Very decently priced at $25 per unit. Bought two for my home use. Connection to the devices were a snap. Each had their own unique bluetooth names, which was a nice touch.

Cons: Used my galaxy nexus and my new nexus 7 devices to play on my home theater speakers through using the Belkin bluetooth music receiver, but the sound quality was like AM radio quality.

Overall Review: Because of its low price, the devices cannot be returned to Newegg. They were final sale, but one could still exchange for another one if it was a lemon