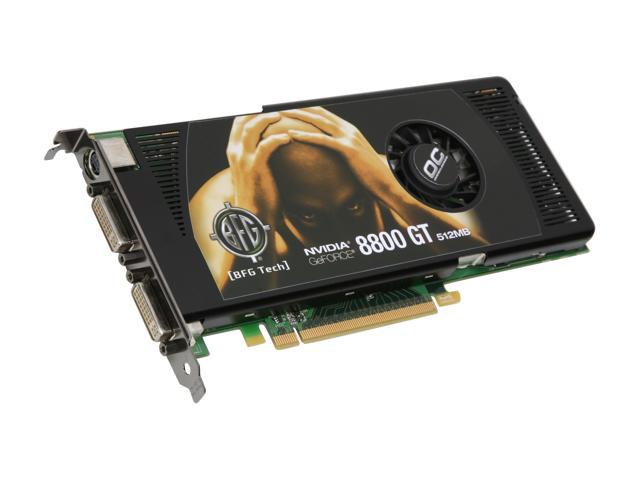 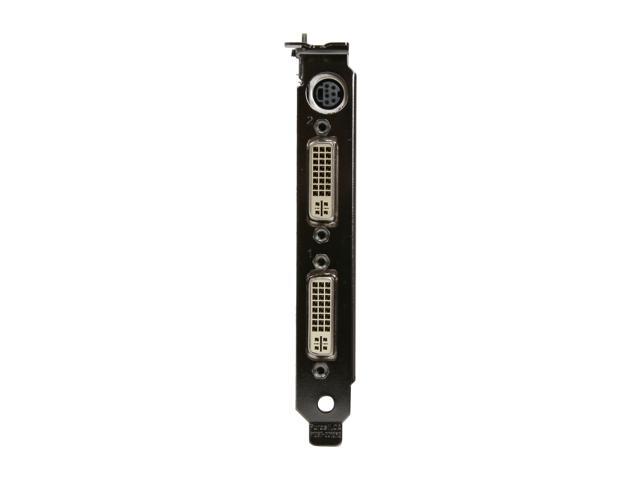 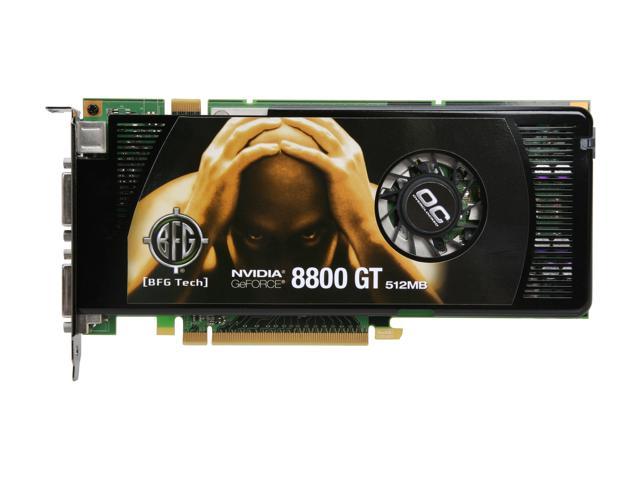 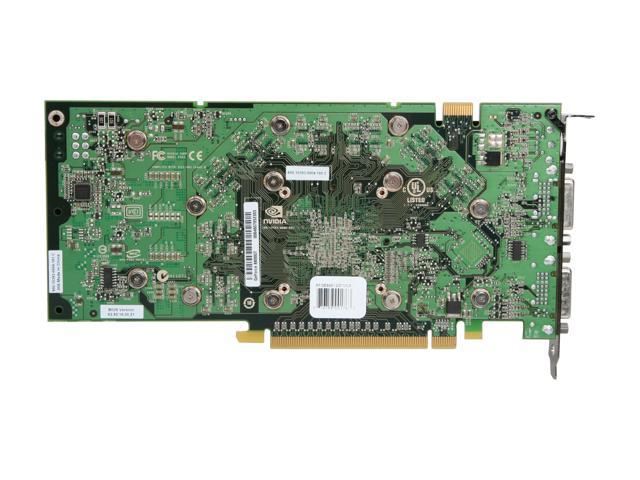 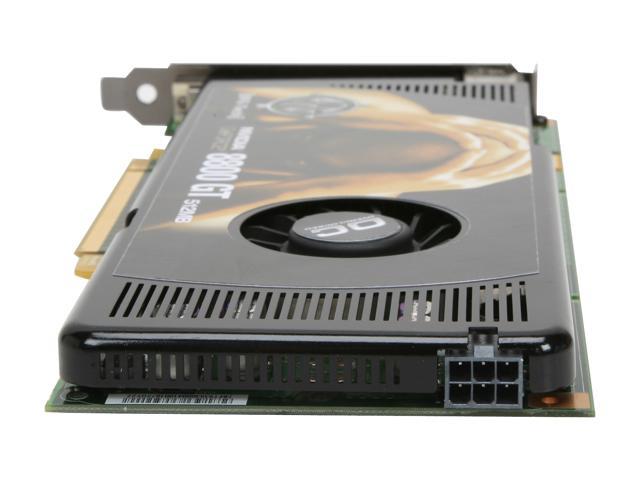 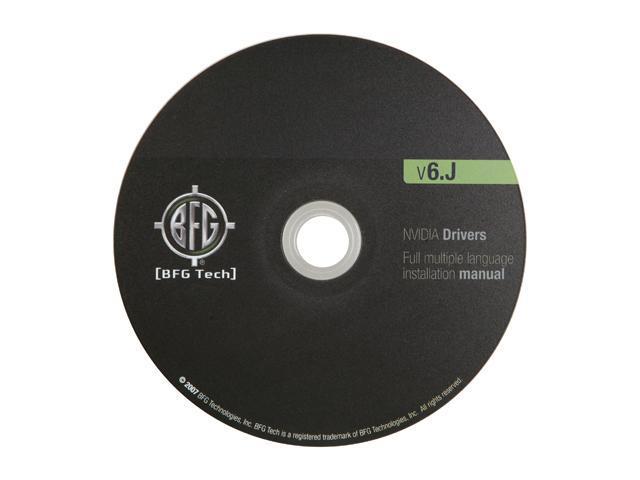 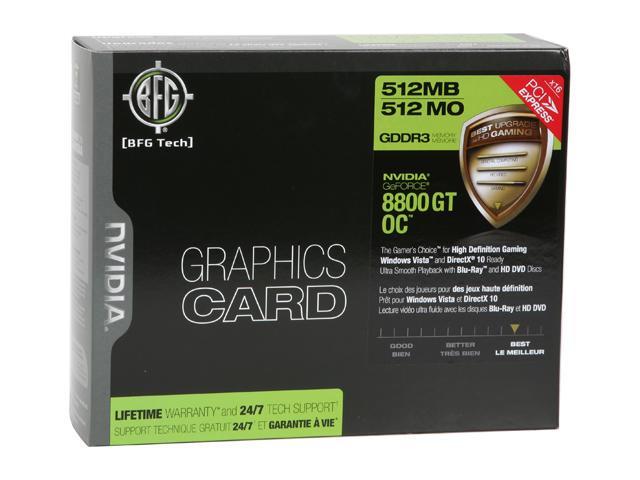 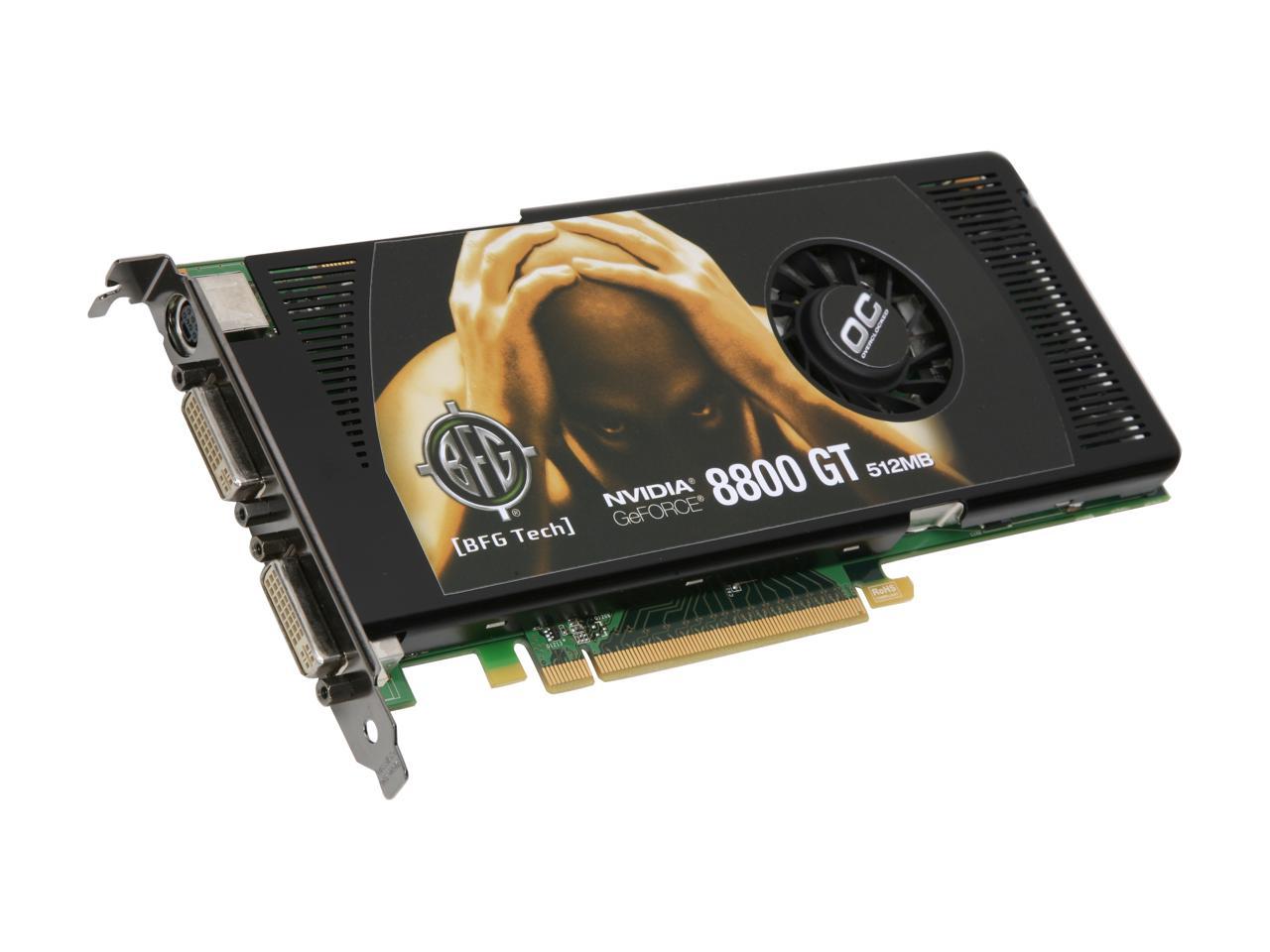 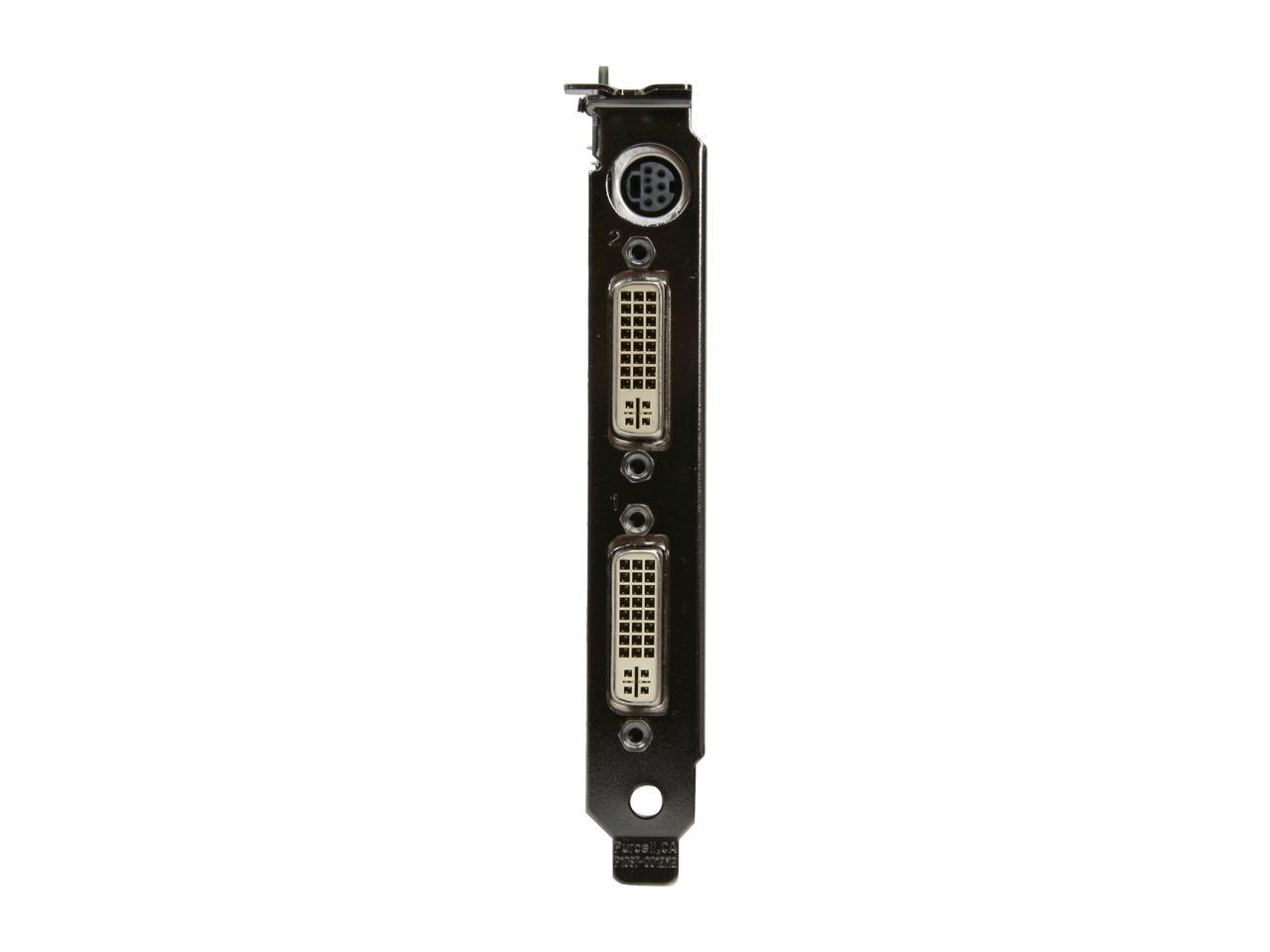 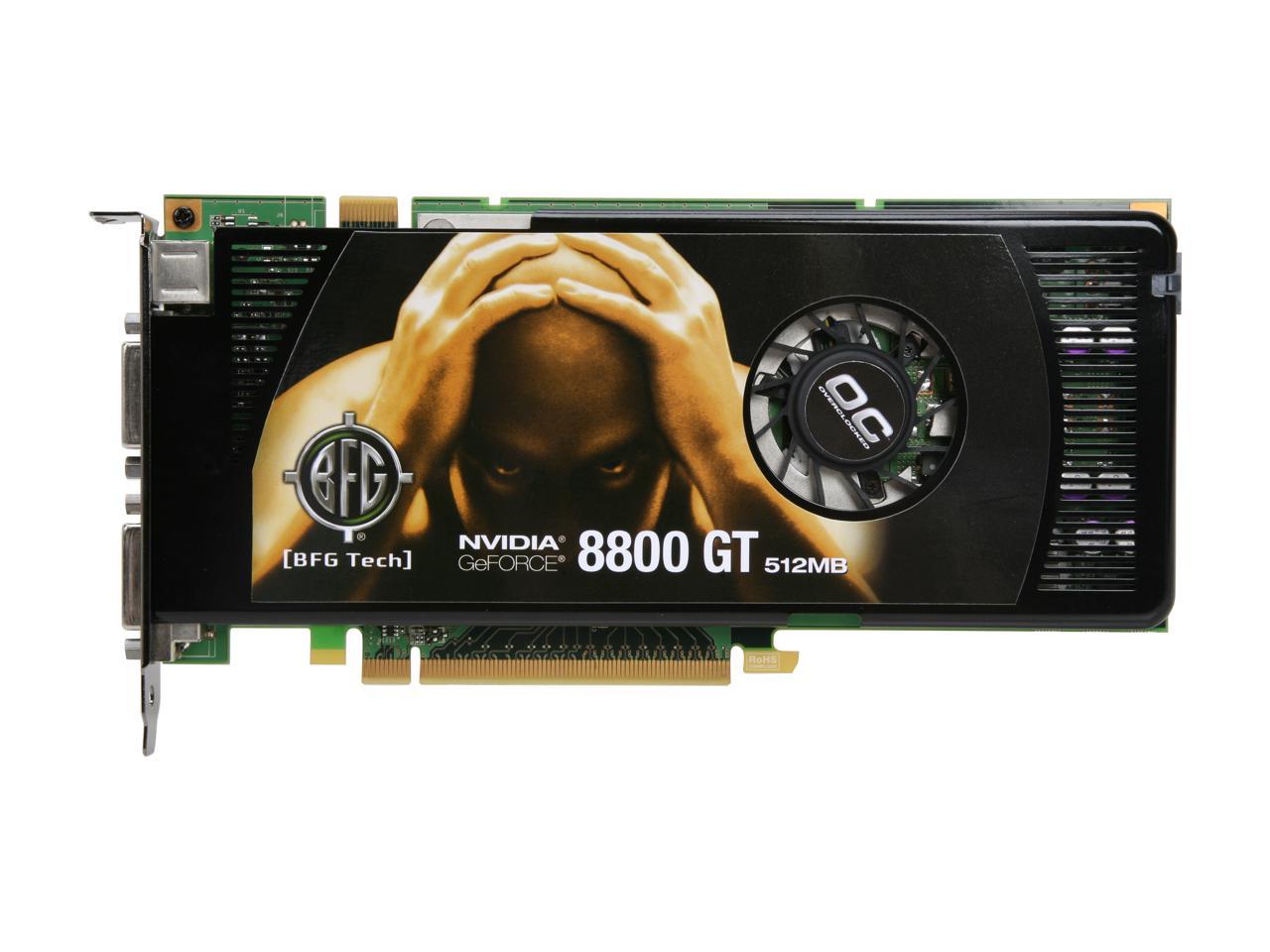 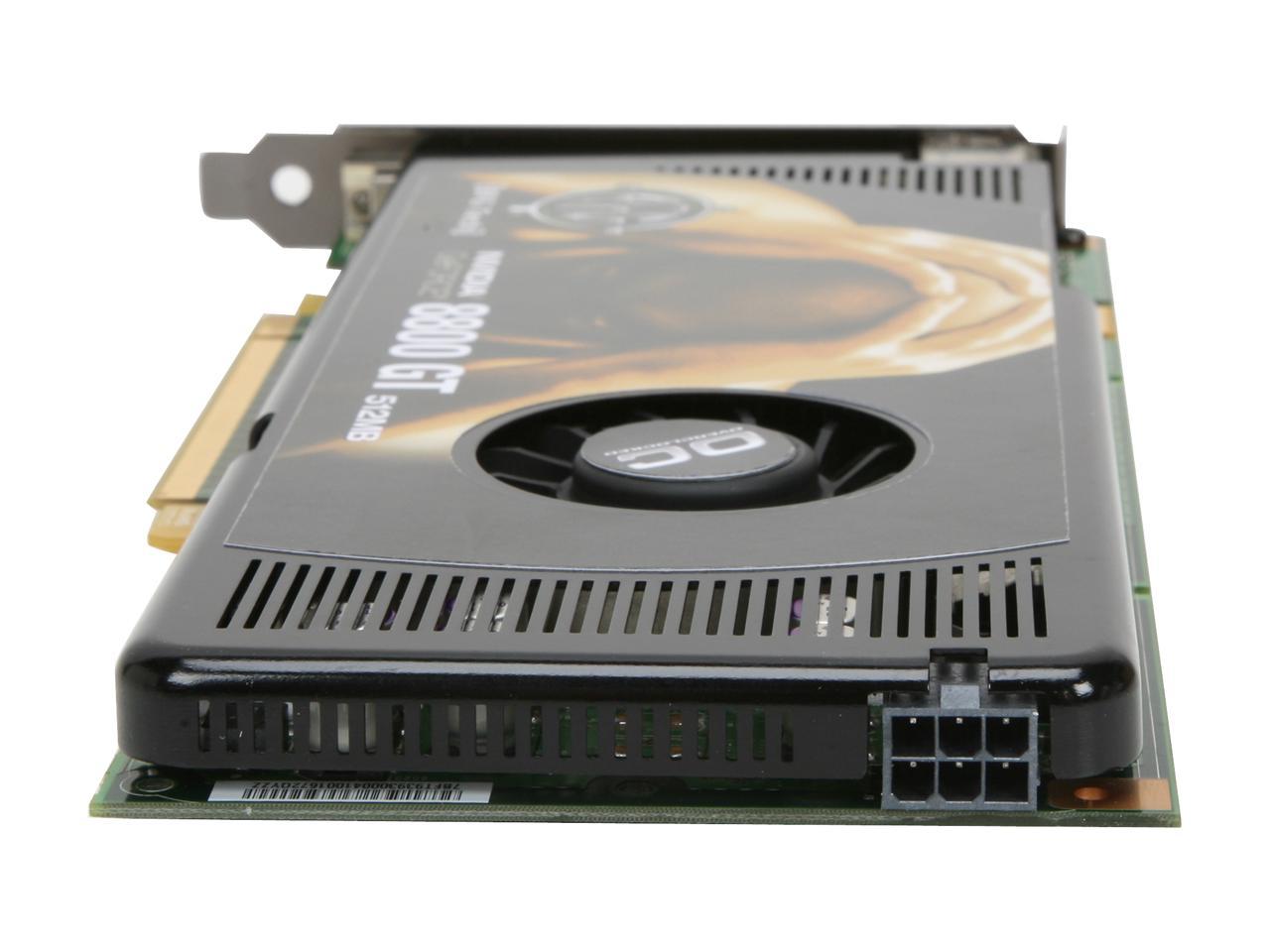 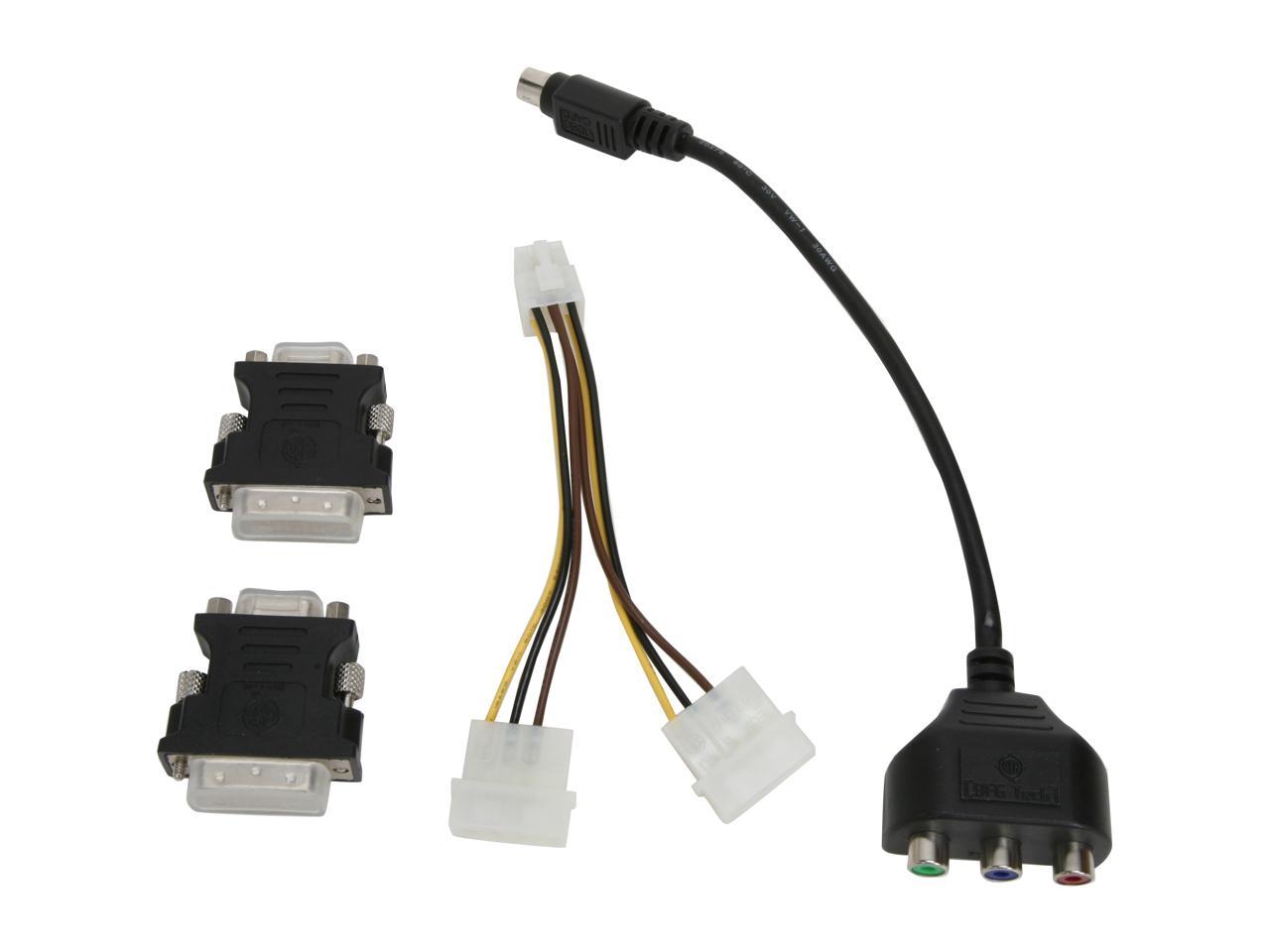 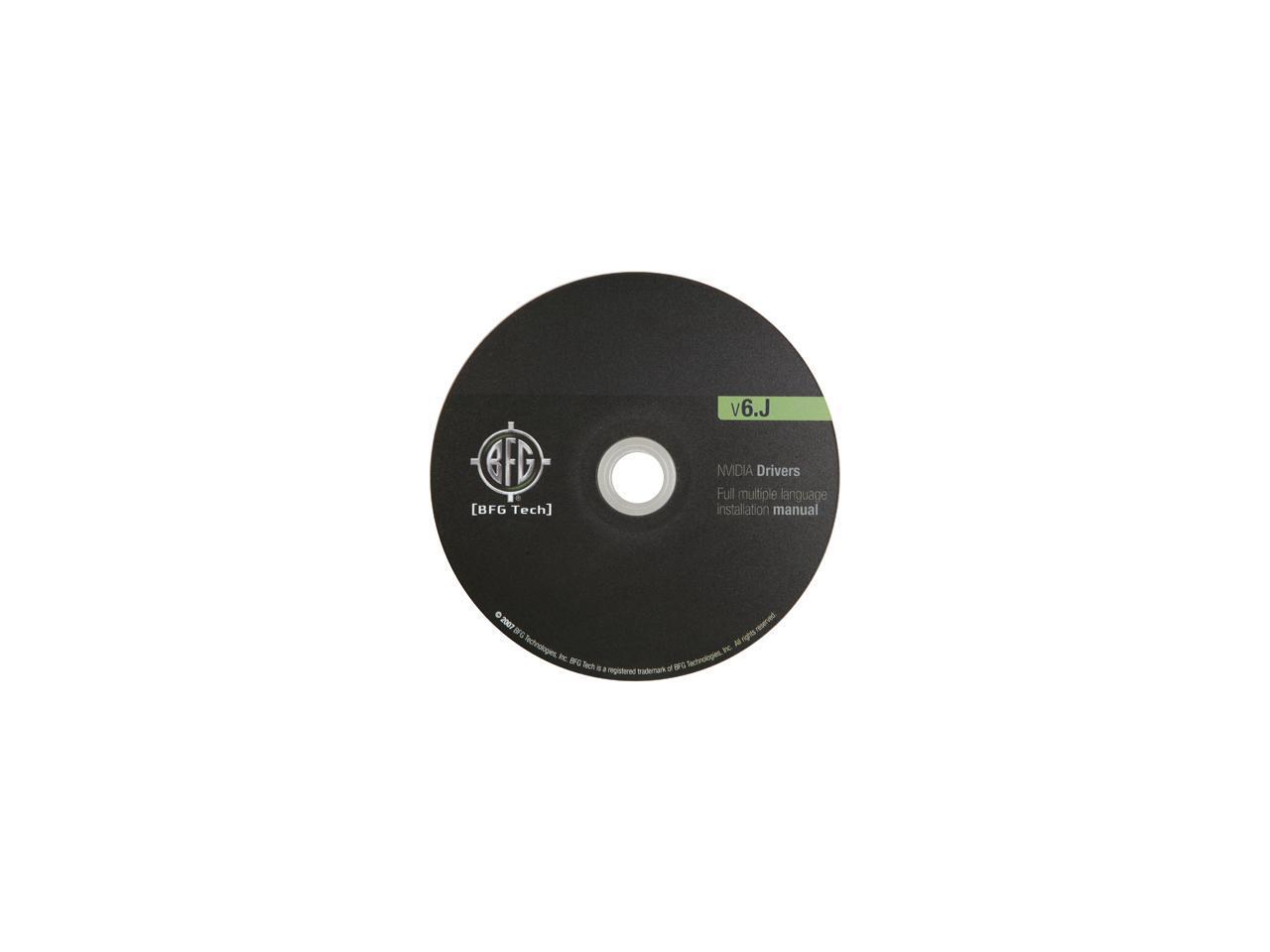 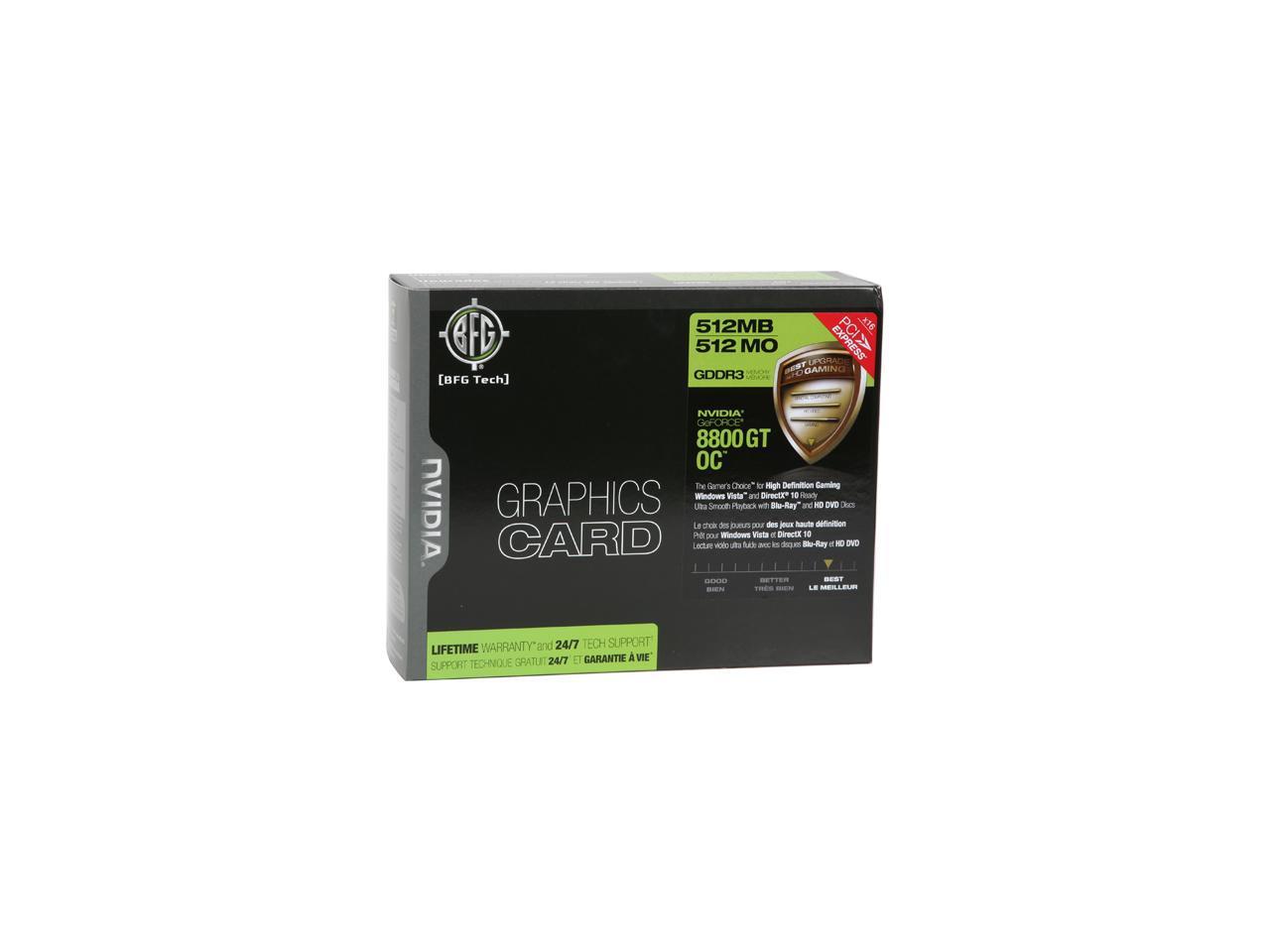 (159) Write a Review
OUT OF STOCK.
Overview
Specs
Reviews
It's no secret that you need killer graphics support in order to really master today's complex games. Knowing where to jump into the graphics card maelstrom is the issue. A world of claims and counterclaims confuses the customer until you don't know what you're doing. Maybe we can help. BFG offers a great lineup of cards built on Nvidia processors and boards, and the 8800GT is a great blend of value and video mastery!
GeForce 8800 GT is based on Nvidia's G92 GPU, a 754 mega-transistor monster. 112 1D scalar stream processors run at a blistering 1,566MHz. Seven clusters of 16 shaders, share eight texture address units, eight texture filtering units and have their own independent L1 cache. Thinner than the 8800GTX or GTS, it suffices with a single-slot cooler, and pushes most of the heat toward the rear of the card and hopefully out of your case. It's a power miser, too, and even a pair of 8800GT cards uses less power than a single GTS.
Mainstream gamers can now take full advantage of DirectX 10 for a price that won't sent you in to shock . . . except maybe BioShock!

Pros: amazed performence for a modest price. This is my second BFG card, I replaced a bfg 7950 gt oc 512mb card(also a very good card). Crysis still runs like Crysis runs but, all other new games run at maximum settings. Install disk had latest drivers(same driver a 7950).

Cons: it's long, make sure you have about twelve inches of space for card clearance.

Overall Review: I ordered this card and twelve o'clock on monday and I had it by twelve on tuesday(3 day ground ups). The order was processed and sent from Calf. to La. in less than 24 hours. I didn't think that that was possible...great job newegg.

Pros: These are cards are still stellar performers even after all of these years. I would recommend these to anyone, especially at the price they are being offered at. I bought three of these for 69.99 each and dont have buyers remorse whatsoever. Not my first 8800GT but definitely the best. BFG rocks! Have 2 in SLI and got another one for whatever

Cons: One of them had a fan that didnt work when I opened it up and ended up overheating the card. I called up BFG and they gave me no problems and gave me an RMA #. The tech was really nice and professional and BFG has gained a lifetime customer from me. Im not going to take any eggs off for this because it can happen and the two cads I have now in SLI are amazing performance for the price. BFG is one of the best manufacturers out there and they back up their products without a doubt. Go BFG!

Overall Review: I highly recommend getting two of these cards for SLI and you will not be dissapointed. Sure a single, better card is the best choice, but at this price it's going to be hard to find similar performance.

Cons: None, this card is the best one I've bought so far.

Pros: Eats the BF series for breakfast, COD4 for lunch, Crysis for dinner, then has a midinight snack of everything else I own. This card is incredible for the price! Then I got two. Now it's even better! Can't beat this card!

Cons: Some might say that a card that runs hot is bad, but do some research and you'll see these cards are designed to run hot. Mine idle at 50c and under load around 70-75c after a long gaming session. So this is not really a con, but something to consider when you want to whine about temps.

Pros: Easy to install and works great out of the box. Not load at all (much quiter than my 7600 GT). Great price, especially with the rebate

Overall Review: I don't do alot of gaming, but just keeping my pc a bit quiter under video load has been worth it. I was worried about the size, but it fit right in my xps 410 with room to spare.

Pros: Wow is a great word, especially for this card. Superior performance in a single slot, and absolutely DEVASTATING in SLI. Dollar for dollar, these just can't be beat, and in tandem will outperform anything even remotely comparable price-wise. Stays within reasonable temps even under heavy loads, flashable firmware, flawless DX10 performance and really breathtaking output on a 28". Great price, quiet, forever warranty - what else is there? COD4, Assassin's Creed, UT, BF2 + 2142, GRAW, Rainbow - you name it (and don't go Chrysis on me - who cares?) - all run at maxed settings smoothly even on a single card, and will blow you away in an SLI setup (crazy 160+fps in most @ 1900X1200) Build it right, keep your drivers current and play on!

Cons: Although it's common to every card out now, it's still a pet peeve that the cooling is on the downside of a typical install - it could move more heat if it were on top.

Pros: -Maxed out on every game ive played including cod2, cod4, tf2, hl2ep2 and trackmania nations (all except crysis which runs on high settings) - fairly inexpensive (i remember paying way more for my 6600 gt back in the day) - its bfg. this is my third bfg card and all are great. i have had one problem (with the 6600 gt) and they replaced the card within 2 weeks (probably my fault too) - easy to overclock with ati tool - 8688 on 3dmark06 (processor probably held it back) - directx 10 sli ready ;)

Cons: - a little long (not really a problem for me) - my sound drivers/networking drivers got messed up when i installed this card. Fixed it but could be a problem if you dont have installation cds. - went down in price 2 weeks after i bought it

Overall Review: This card is a great deal and i would recommend it to anyone who wants that little performance boost. Gig'em BFG! WHOOP!

Pros: Very good card plays all my games at maximum settings with most of the frame rates up in the 100's. I would highly recomind this card to any one who plays high end games.

Overall Review: Card is long like others have said but no proublem for my case.