This item is currently placed on backorder status and will not be shipped until inventory is confirmed. You will not be charged until this order is processed. Newegg cannot guarantee inventory for backordered items.
Price Alert
Add To Wish ListFound on 15 wish lists 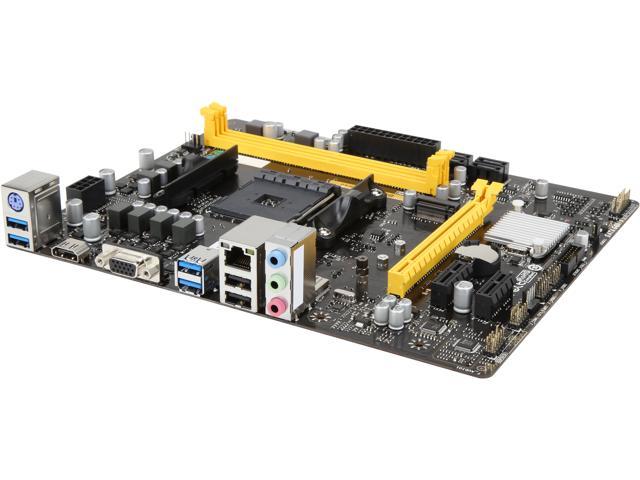 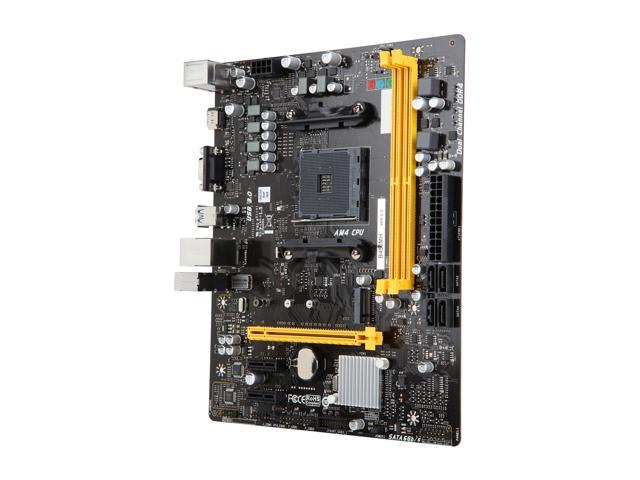 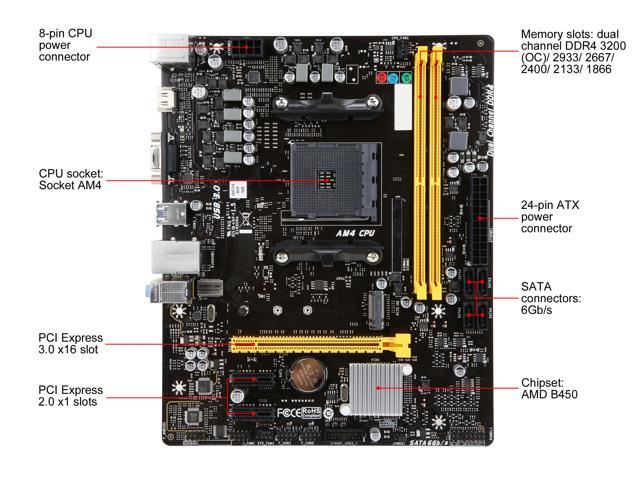 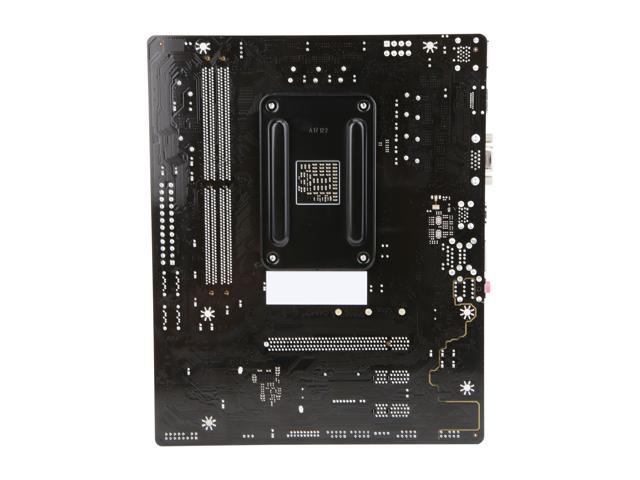 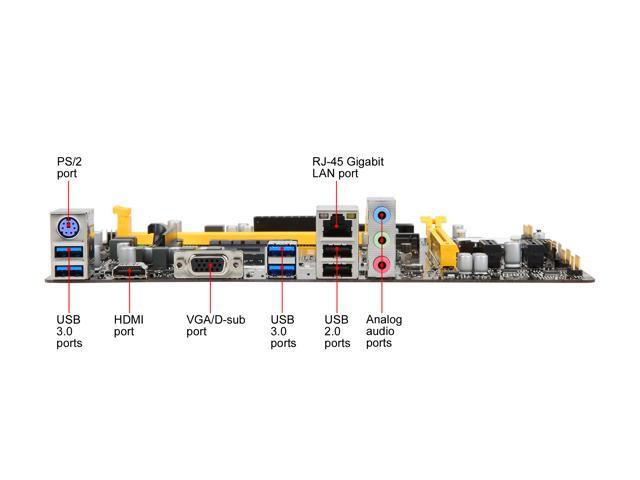 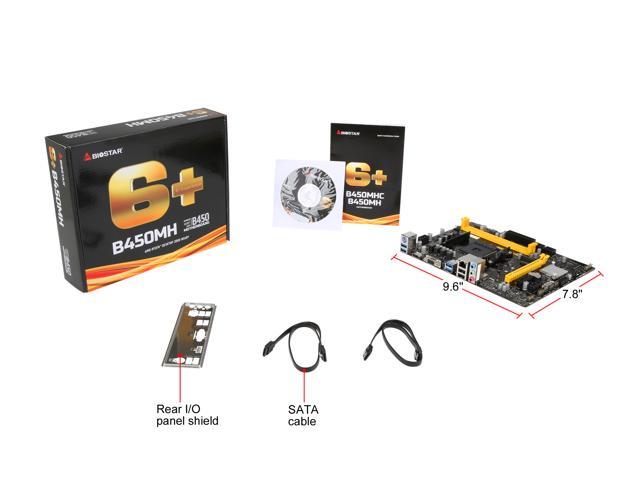 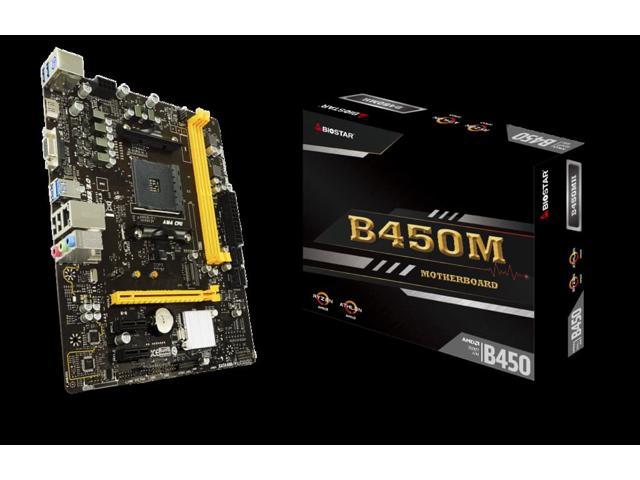 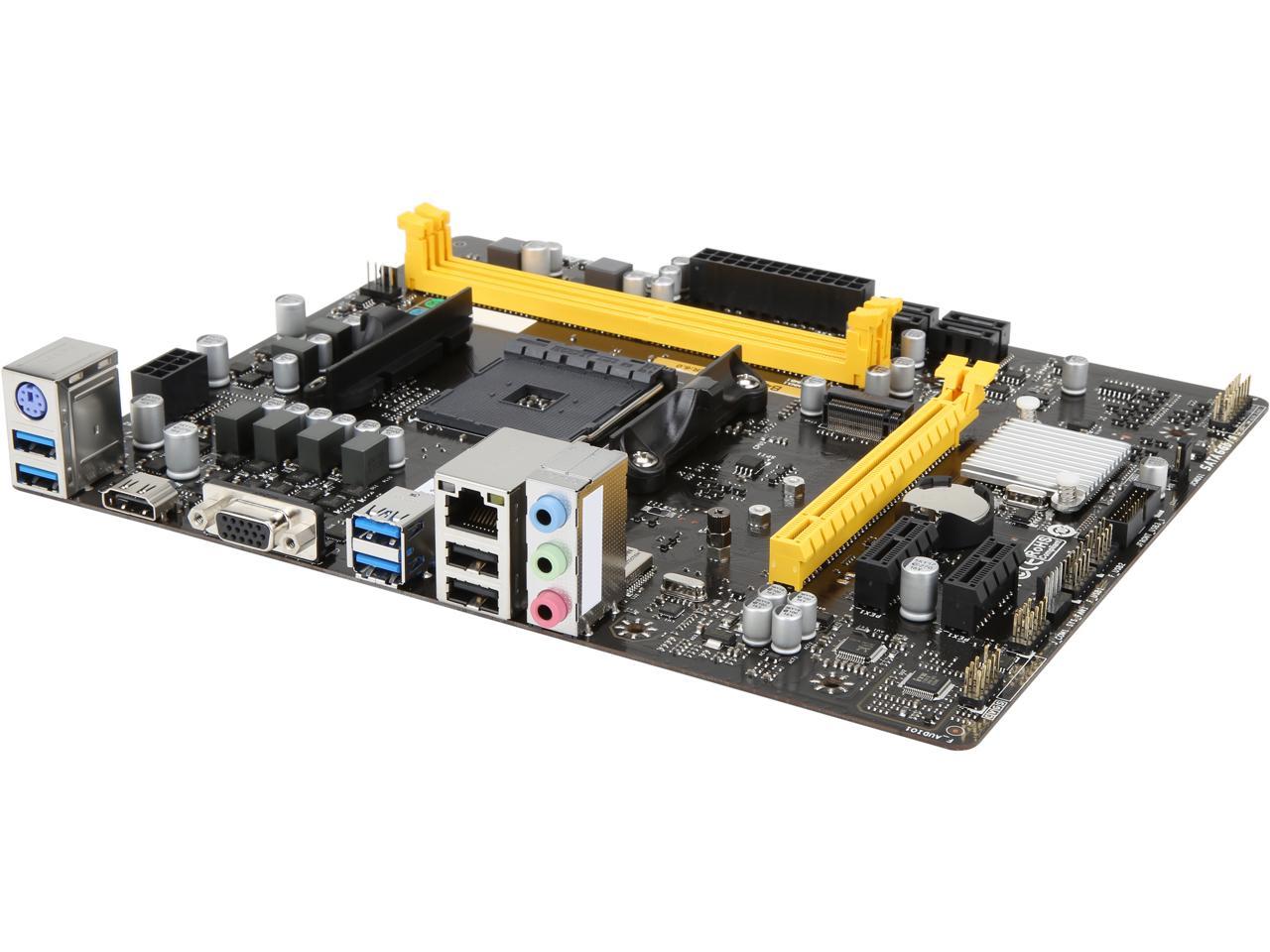 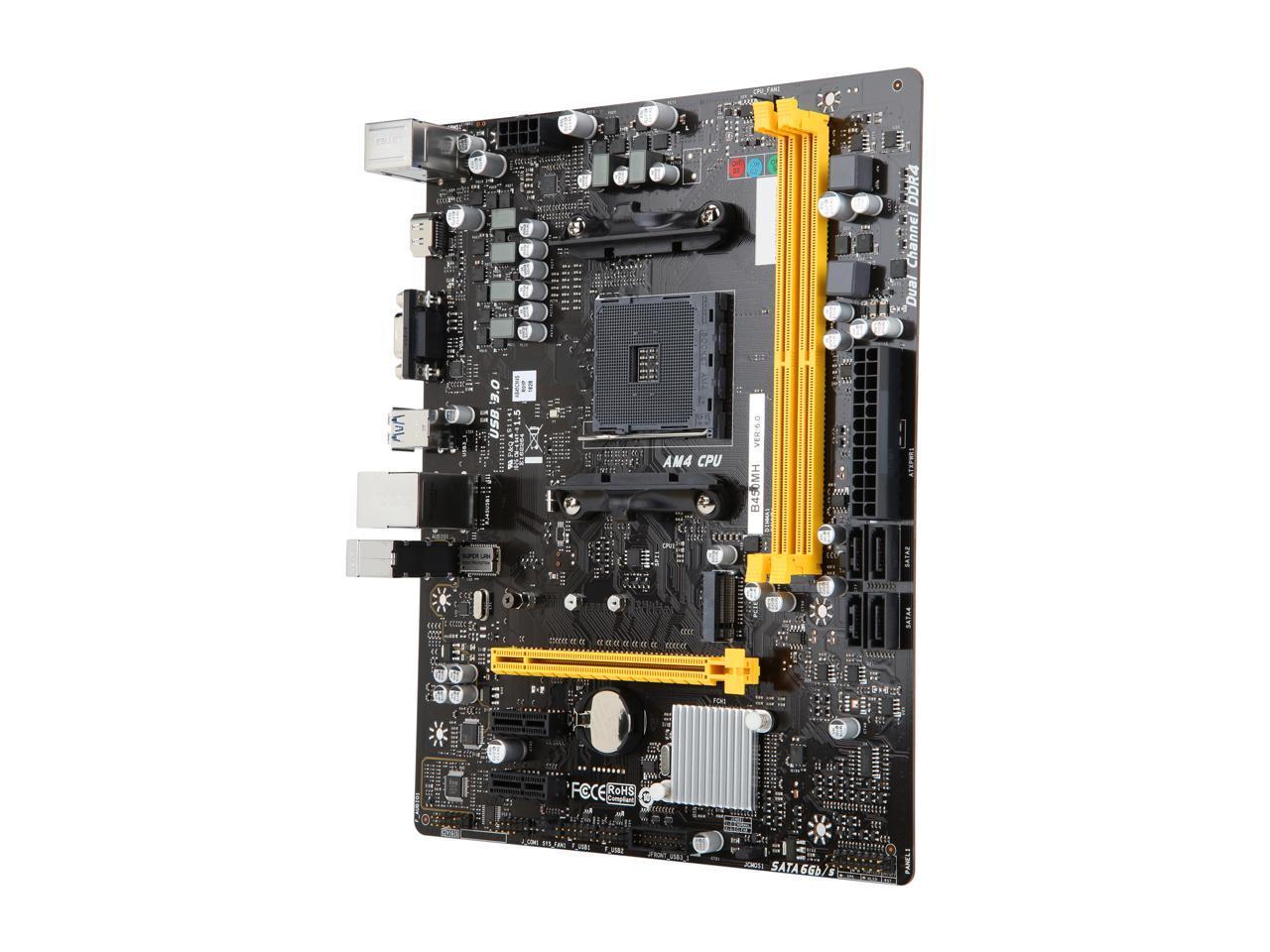 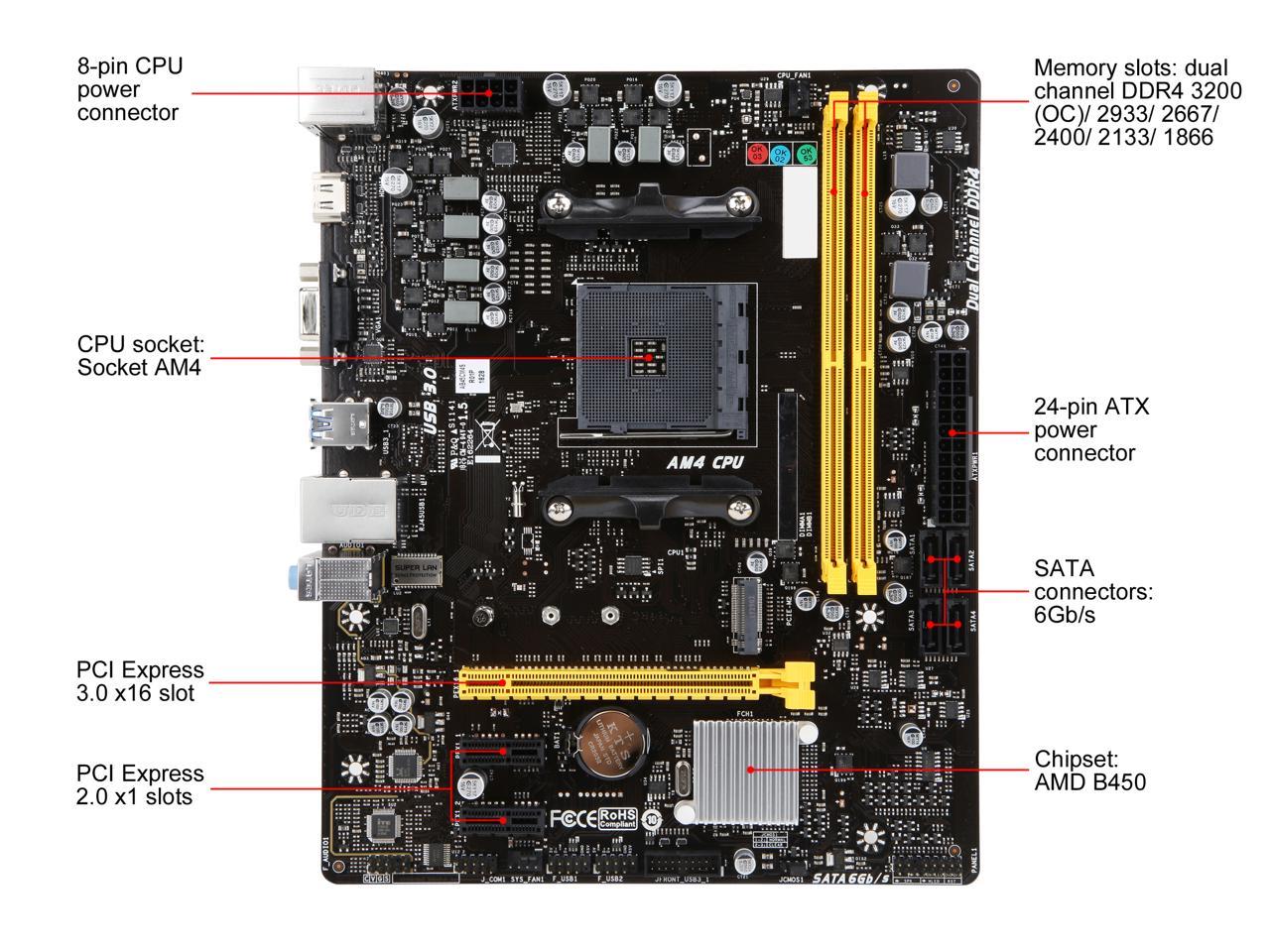 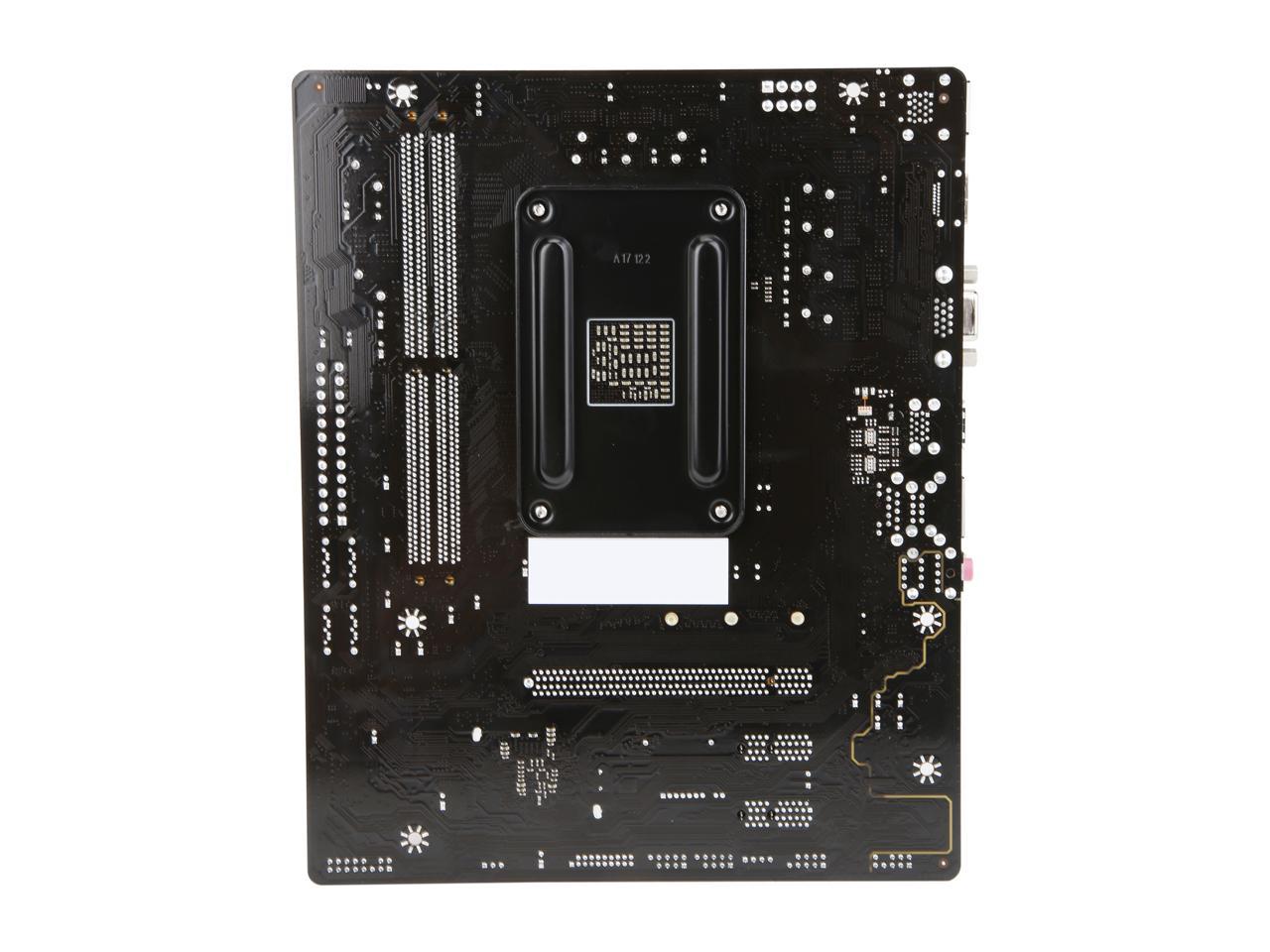 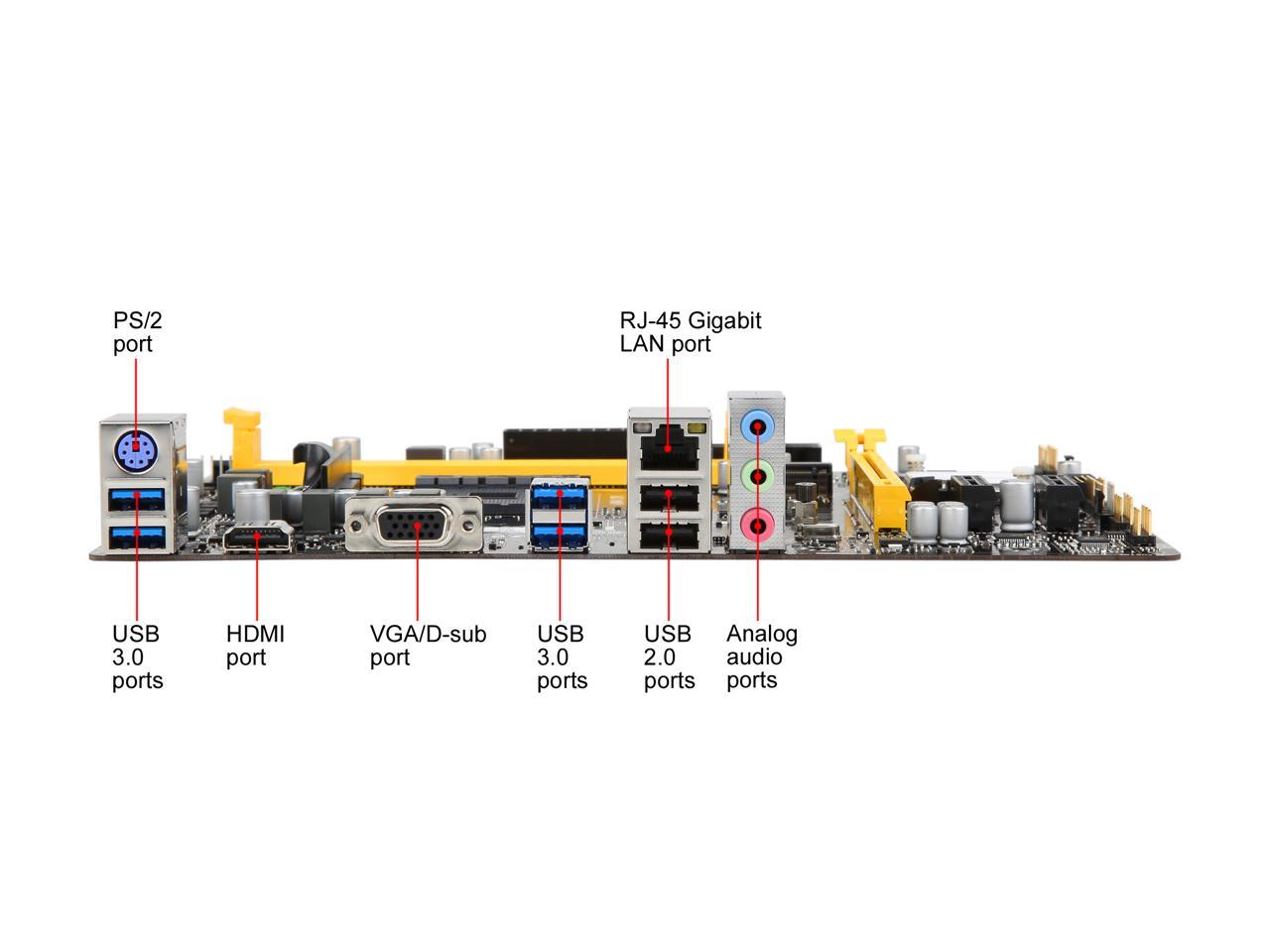 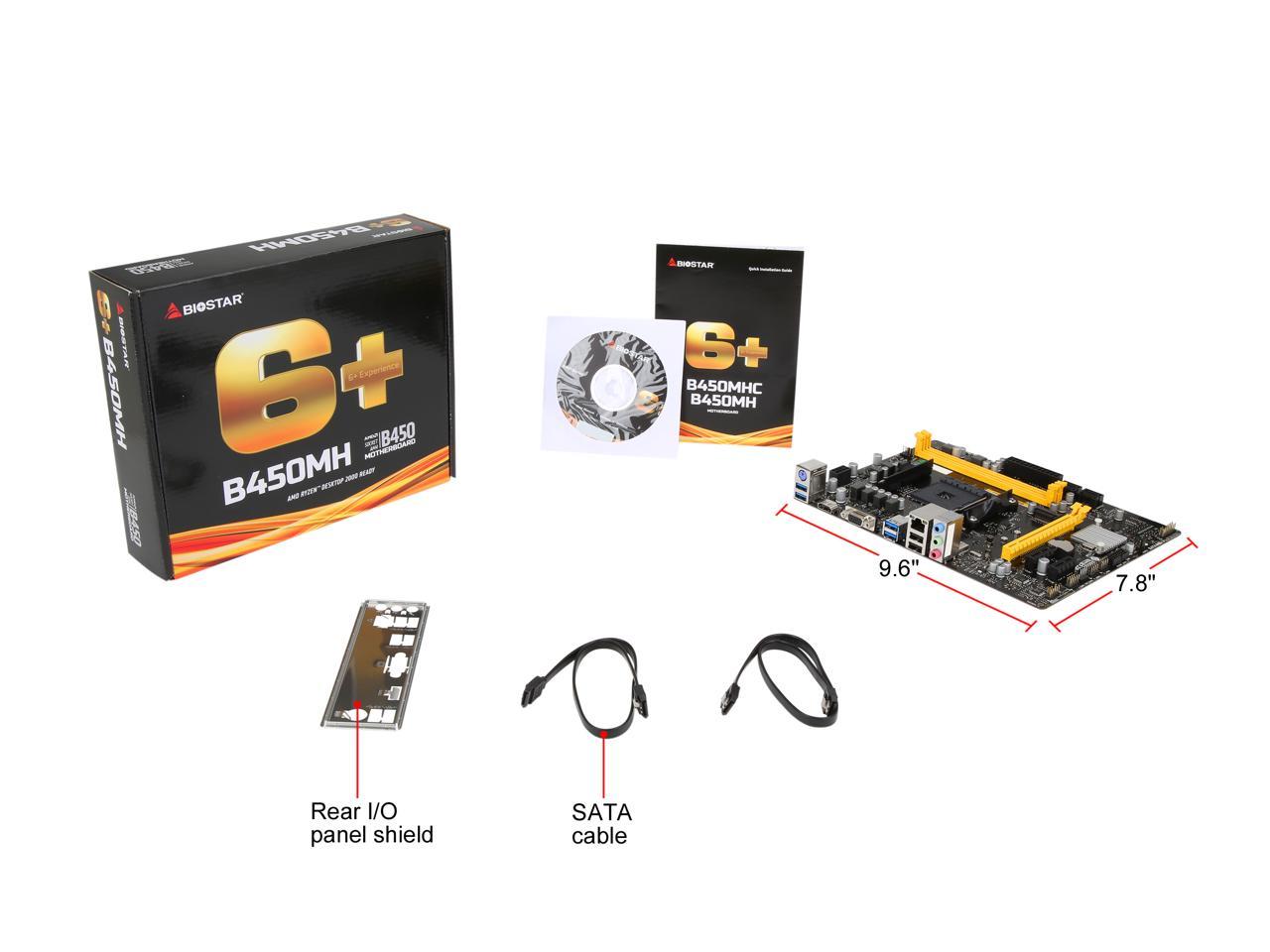 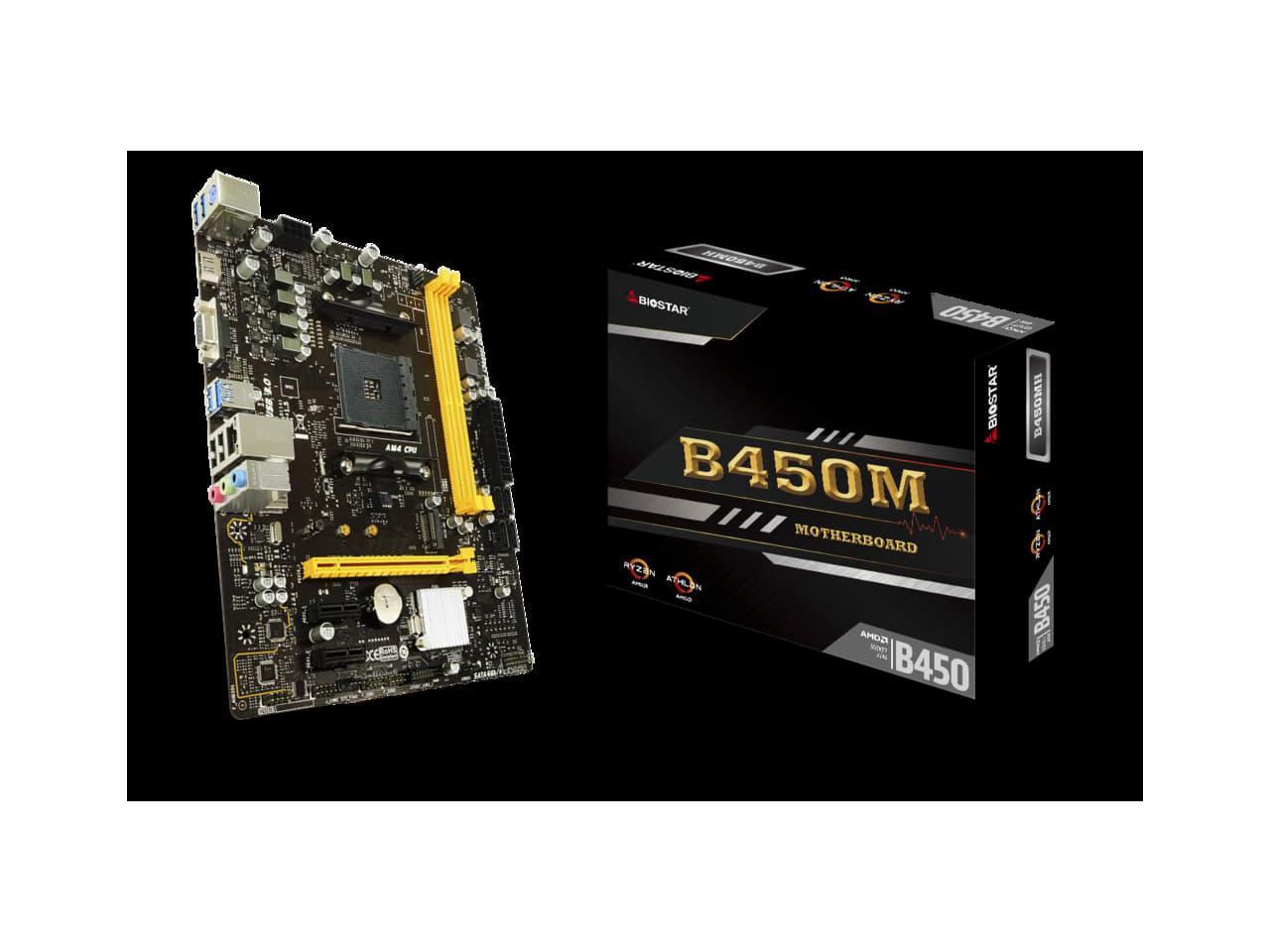 The CPU socket and slots for RAM, SSD, and graphics card are all designed to interfacing with corresponding components fast. The adaptive networking intelligence ensures networking speed always keeps up with any loading level. Fast speed is only part of the story. The motherboard is DIY friendly and comes with comprehensive protection. From installation to maintenance, it won’t take a sweat.

AMD B450 is the high-end chipset for overclockers and tweakers who need robust platforms. This chip provides the ultimate low-level control to its users and delivers ultimate graphics card bandwidth.

DirectX 12 introduces the next version of Direct3D, the graphics API at the heart of DirectX. Direct3D is one of the most critical pieces of a game or game engine, and we've redesigned it to be faster and more efficient than ever before. Direct3D 12 enables richer scenes, more objects, and full utilization of modern GPU hardware.

SmartSpeedLAN is a free software application which monitors and manages your PC's network behavior. With user-friendly GUI, it allows you to select and prioritize different types of network traffic, including gaming, media streaming, communications or web surfing. You can also set any specific applications, choosing to prioritize or block accordingly. SmartSpeedLAN can feature automatic management options that use adaptive networking intelligence to ensure that you are getting the best online experience possible.

ESD (Electrostatic Discharge) is the major factor to destroy PC by electrical overstress (EOS) condition. ESD occurred when PC users touched any devices connected to PC, which may result in damage to motherboard or parts. ESD protection is designed to protect the motherboard and equipment from damage by EOS.

BIOSTAR special circuit design detects overvoltage conditions and prevents voltage surges from spreading in real time. It also actively cuts off the overvoltage supply to protect your system. Over current protection helps prevent motherboard from damage during overclocking or when an unusual current comes. Over heat protection helps protect motherboard & CPU from burning when exceeding the temperature limitation.

Update BIOS effortlessly from a USB flash disk before entering the OS. BIO-Flasher is a convenient BIOS update tool. You can update your BIOS with only a few clicks without preparing an additional floppy disk or other complicated flash utility.

Personalize your desktop with customizable boot logo. BIOScreen is the new feature that lets you personalize and create your own style with unique, custom-made boot logo.

Learn more about the Biostar B450MH

Pros: I saw this board advertised on Newegg a couple of weeks ago and immediately bought it because I had been so impressed with my last Biostar motherboard (G41-M7) purchase back in late 2010; in fact one of my brother in-laws is still using it. I’m using this B450MH with a stock Rizen R5 2600 CPU and its accompanying heatsink/cooler, plus a stock Gigabyte Gaming NVidia GTX 1060 GPU. The SSD is an Intel M.2 660 P series at 1,024 GB. The other SSD is an 240 GB Apacer Panther SATA 3. Ram totals 32 GB using two OLOY series X2 16 GB DDR4 3600 MHz (CL 18-22-22-42) modules. The DVD burner is a LightON. The power supply is a Seasonic G series, 650 watts 80+ gold. The case is an old Rosewill Galaxy midtower and the Windows 10 Pro uses an OEM key. There are three 120mm fans in the case plus the CPU fan (front, top and rear). This board is really “entry level” since there are no real “goodies” on it, such as RGB headers and heatsinks on the VRM modules, but the board performs admirably. I consider the build quality as quite good , equivalent to competing boards from ASRock, Asus, Gigabyte and MSI. The B450MH BIOS is quite comprehensive and the RAM was easy to get running at 3600 MHz. The board came with the current BIOS as listed on the Biostar website. The HWInfo 64 utility indicates that the CPU idles at around 34C (93F) in my office with room temperature of 24C (75F). After hours of non gaming use, the CPU averages 42C (107 F) and after three hours of running Fallout New Vegas (heavily modded) the CPU temperature averaged 51C (124F). After overnight testing on Prime 95 the CPU temperature reached 73C (163 F). Temperature wise I am quite satisfied. According to Biostar’s E-catalogue the B450MH motherboard has a 7 phase VRM. That’s great for 65 to 105 watt CPUs and for gaming using 6 to 8 core Ryzen CPUs VRM quality is not a big issue in my opinion, as not all cores will be running at 100% for any extended period of time. Finally, I have no problem with the number of internal USB connectors, and the number of external USB 2 or USB 3.1 connectors.

Cons: My only complaint is the lack of fan connectors (1 CPU fan and 1 system Fan). I used two fan splitters to permit running my four fans in this build.

Overall Review: My advice: buy this board if you want to build a basic but capable system!

Pros: Everything works as advertised, B450 supports Overclocking

Overall Review: This was the least expensive AM4 motherboard I could find that wasn't A320 or A520. Put it in a build with old parts for a light gaming rig, R5 1600, GTX 1050ti, 16GB DDR4 3000. Had to manually set RAM speed as xmp didnt work. Bios in general navigates like older BIOS', I prefer the newer click BIOS' like from MSI, but once everything is set up you rarley need to access the BIOS again so not a big deal. Also it only has 2 fan headers so you will probably want a splitter, but I knew that before purchasing. It's a motherboard, it works.

Pros: It's not a bad board if you set it up properly with regard to cooling. It's very much a no-frills product, but that shouldn't catch anyone off-guard if they take just 60 seconds to examine what they're buying. Once it's "dialed-in" it behaves pretty much like most other B450 boards. This platform is a spare system mostly employing components I already had on-hand. I'm using mine with a 1st-gen R5 1500X. I had no problems getting the board working with 2x8Gb of 3200MHz Ballistix RAM.

Cons: Initially, when doing pretty much anything really CPU intensive, the system would simply quit after about 30-to-40 minutes of activity. Not CTD or bluescreen; just quit. This was with an AMD "Spire" downdraft HSF, and a rear mounted 120mm exhaust fan over the I/O panel, along with a 120mm fan in the front of the case. CPU temperatures were *not* excessive right up to the point where the system quit. Exercised due diligence, swapping out components one at a time and testing after each change and the shutdowns persisted. It seemed plainly obvious that the lack of any heatsink on the VRM MOSFETs was, at the very least, a likely culprit. (I more than half-expected this to be a potential problem prior to purchase.) Sure enough, mounting a 120mm fan in the top of the case blowing across the MOSFETs was the cure. Seeing that, I went a bit further and mounted heatsinks using thermal adhesive on the MOSFETs, just for a little extra cooling. (This, of course, voided the warranty.) However, the system has been entirely stable, even while Summer temperatures have arrived.

Overall Review: Personally, I would limit the use of this board to the "65-watt" Ryzens. I wouldn't put any of the 95W or 105W processors on a budget board like this, but, feel free to prove me wrong. I'm pleased to see that other users are having a good experience with it. It would be great if Biostar would invest another dollar or two, (at most), in the Bill Of Materials for this board and throw a modest heatsink, along with a thermal pad, on the VRM.

Overall Review: 3200g running in this without a bois update

Pros: Built very well and it is perfect for my ryzen 5 2600. It has all the features expected of a b450 chipset at a very competitive price.

Cons: There is nothing else to mention on the con side of this board it is more than sufficient at this form factor

Overall Review: Well known brand. I am glad to see them again in Newegg.

Pros: Love the mother board it’s cheap and works for my son gaming pc. Biostar is old school

Overall Review: Works fine with Ryzen 5 5600, after BIOS update. You need to install an older AMD cpu to do the upgrade.

Cons: I purchased a computer prebuilt that wouldn't turn on and it turns out that this motherboard was to blame. Customer service sent me a brand new motherboard of the same model and once replaced the computer has been running fine since.

Overall Review: Just beware. Not sure how long this motherboard will last.

3 out of 8 people found this review helpful. Did you?