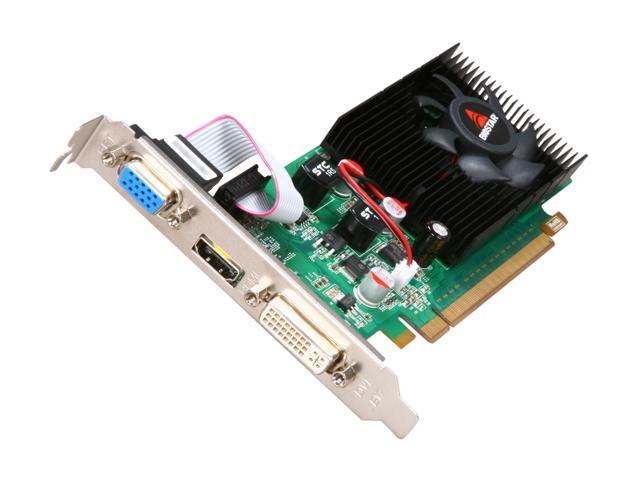 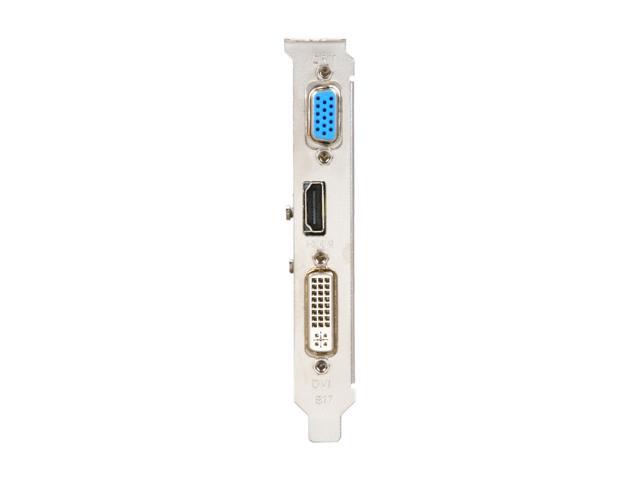 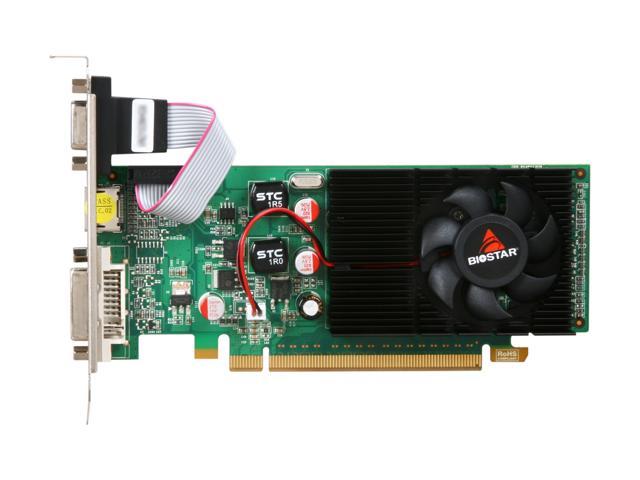 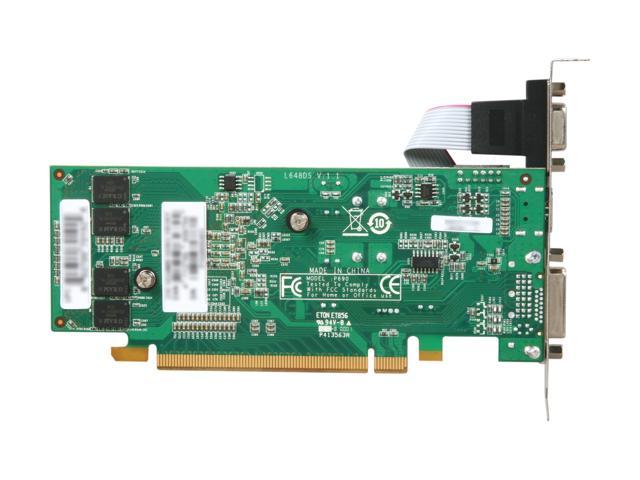 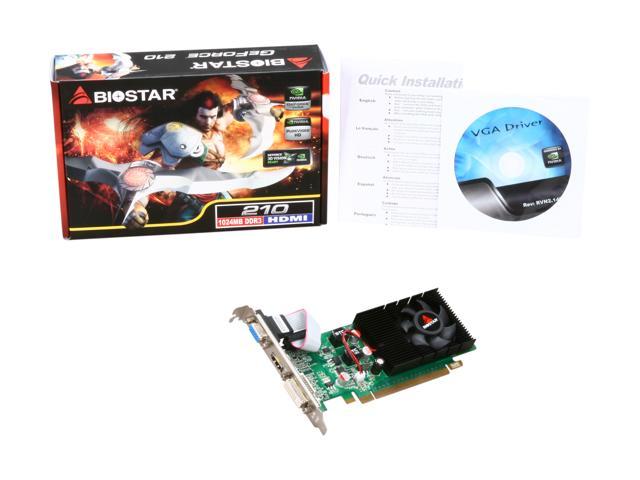 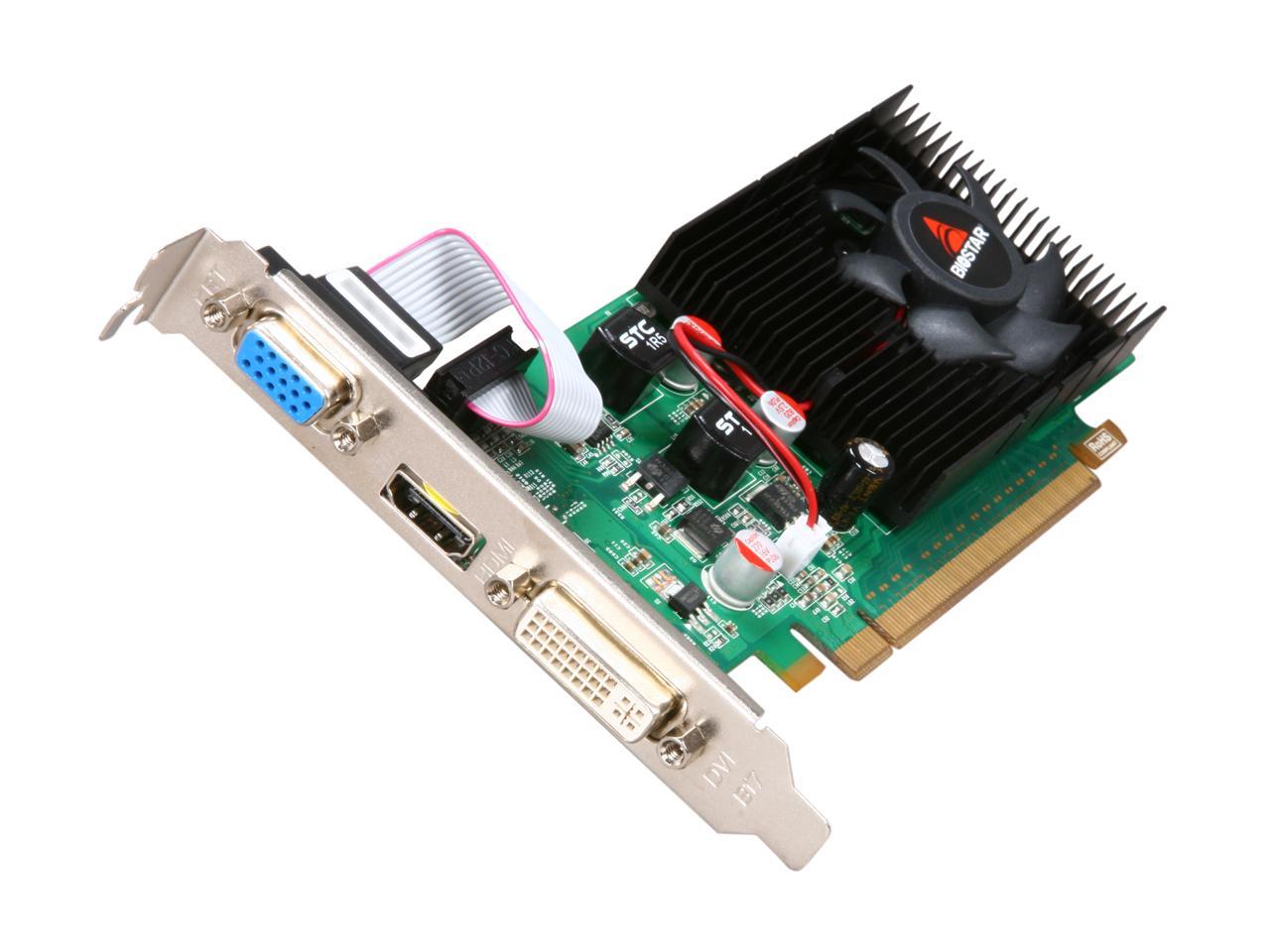 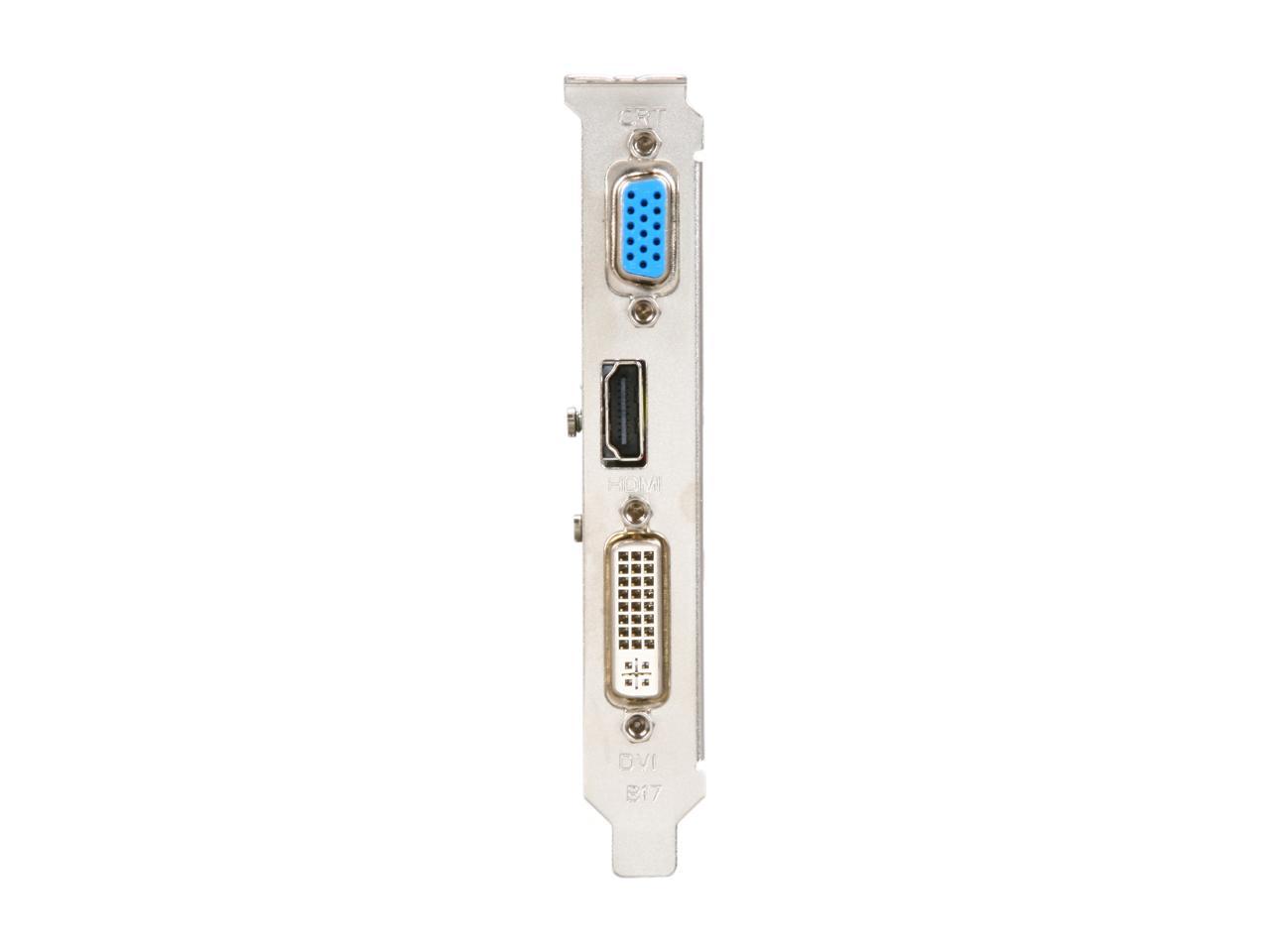 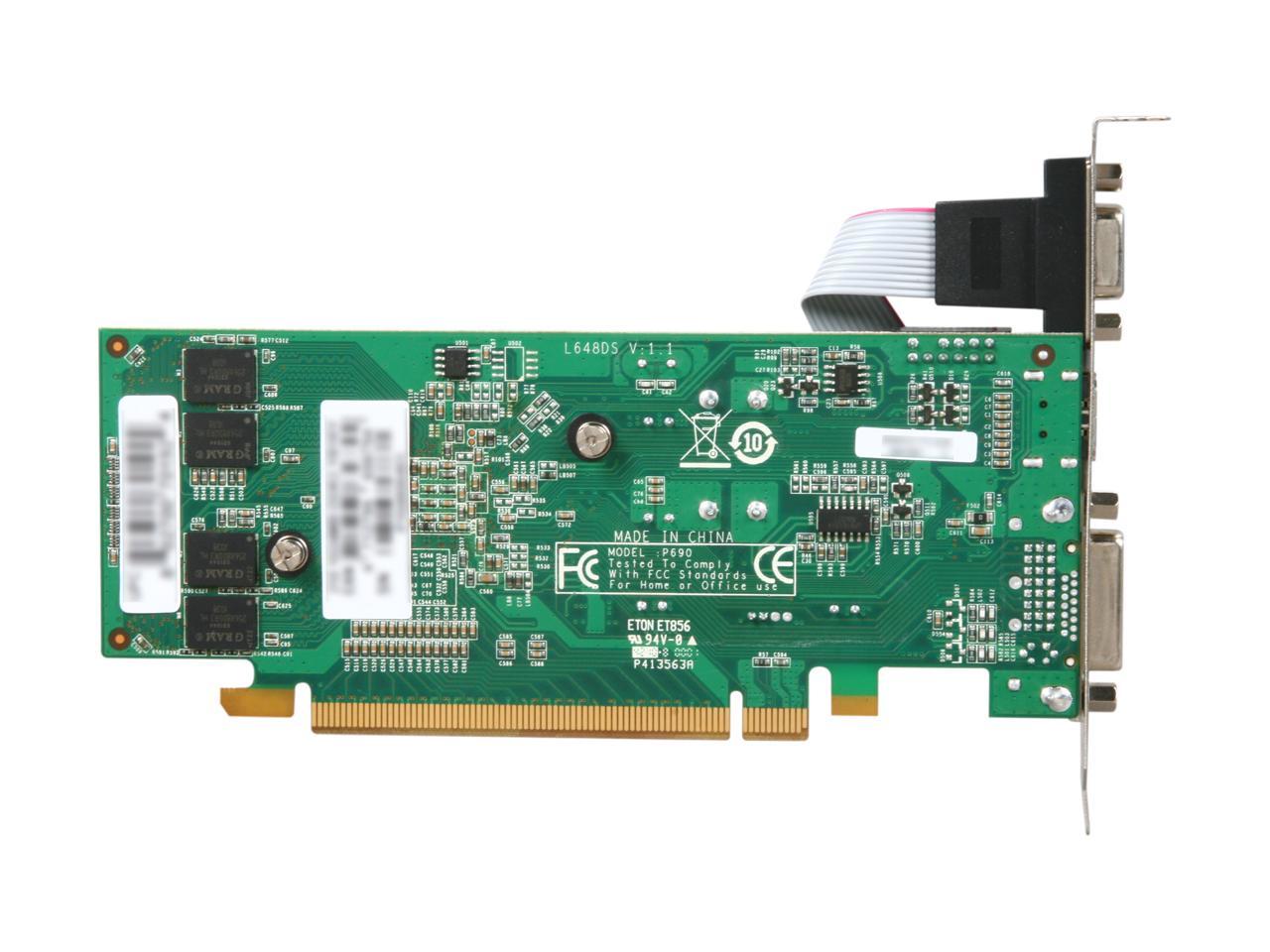 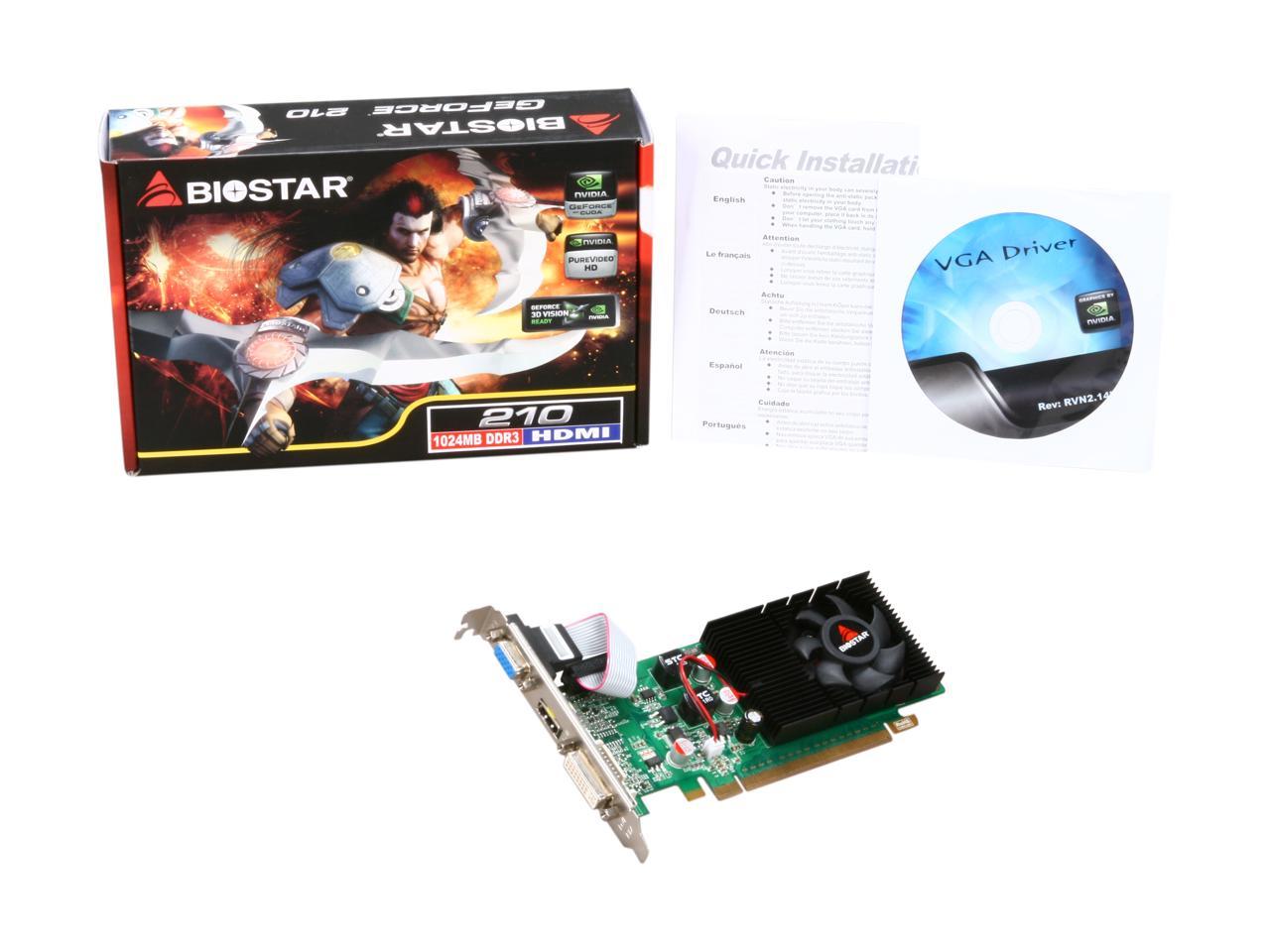 Learn more about the Biostar VN2103NHG6

Pros: Using at work to setup a 2nd monitor. Limited on power supply (275 watts). I have tried some ATI cards and was having trouble when the monitor went to sleep, I'd have to reboot. No such issues with this card.

Overall Review: My usage is limited to office type work, so no gaming type testing. It does what I need it to do.

Pros: Most bang for the buck. This card is playing most newer games on med to high settings. I am really surprised at the low price on such a great card. It is backwards compatible with PCIE-1.

Overall Review: This would be an excellent card for the casual gamer or someone looking to add a little extra juice to a lacking PC.

Pros: Forcing this field are you? Well then... zilch, zippo, zero, zed, none, nada, not any, narry a one, bereft of pros, sans pros, pro-less.

Cons: After 1 year the fan on the card started to make noise most likely due to breakdown of lubrication and or poor assembly (in a well tended clean cool running PC). Seems to be no excuse for the video card other than poor construction and or inferior materials/methods.

Overall Review: The fan started failing 1 year and 3 weeks after purchase. Called Biostar tech support and was told I would be sent a form via email but did not receive it. This leaves a bad and worsening first impression for Biostar. Perhaps Newegg could somehow let Biostar know that this is no good or drop them as a supplier. Then again Biostar could just replace the card.

Cons: -Fan is loud after a few weeks but I did a little maintenance on it and returned to running quiet -Good for basic gaming

Overall Review: If you understand its limitations, then you can appreciate this card and its value.

Cons: After having the card for about a month, the fan started to make very loud sounds any time the card was put under any stress (bad bearing I think). Even then the card would stay at around 60C.

Overall Review: I unpluged and removed the stock fan completely, and I am now using an extra case fan I modified to mount onto the card. Now it idles at about 40C, and ~50C while under stress. I knocked off the 2 eggs from my original review due to the high temperatures and the faulty fan. I recommend you get this card only if you're on a budget or you need a card that performs better than an onboard chip.

Pros: This is a decent card to look at for a computer that is small form, has a weak power supply, or has poor on board graphics. All three of those things can be applied to the computer I am now typing this review on. The pros: -This card is Low Profile, which is great for a SFF case like mine. -This card is pretty cheap; I could have done worse. -It is could for movies, internet browsing, and light gaming. I definitely saw an improvement in my PC and was able to run games that I couldn't run before.

Cons: Time for the cons. -The fan on this thing is really loud. The only thing that made it bearable is the fact that I don't own speakers, I use headphones so it cancelled the noise to an extent. Not only that, but it would make a loud whirring sound after start up for about 5 minutes. -This thing got hot. Sometimes I would put my hand on the case and I could feel quite a bit of heat coming from the area over the video card. -It died after 6 weeks. It finally tanked on me. I wasn't too worried about it because the initial warranty was still good and I had purchased an extended warranty as well. However, my mother took it upon herself to remove the card because she bought me a different one (APG 8x, can't use it) and threw this one away. I called support, and they said that I can't get a new one because I didn't have the original one that broke and couldn't prove it broke, therefore they would not replace it. Not so much a con, could have been avoided, but bless my technology dead

Overall Review: If you really need a low profile graphics card, go with something else. Once I saved up the cash I purchased a cheaper card that was even faster. And this card doesn't even come with a low profile bracket, I had to go to a local computer repair shop and buy one.

Overall Review: Takes an overclock very well and still doesn't overheat. Don't install the drivers that come with the card, download the newest drivers from Nvidia.

Pros: Good card for the price. For $35, its hard to complain about it. Not much to the install. I used this card for a replacement for a card that died on me. My kids use this computer and they dont have any problems playing their online games. My son plays Battlefield 2, its an older game but it works well.

Cons: The only complaint I have, is on Biostar's website. When you install any new hardware, its always best to go out to the website and download the latest version of the software/drivers. When I selected my card from their site, it said the website was unavailable.....So I had to use the drivers from the CD, which worked fine for now....I will try again at a later time.