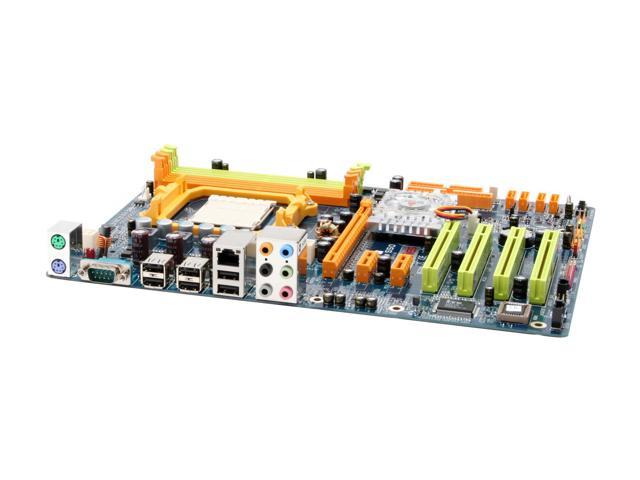 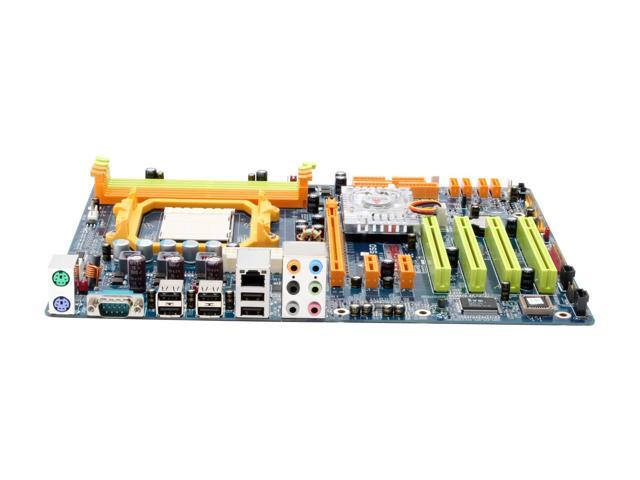 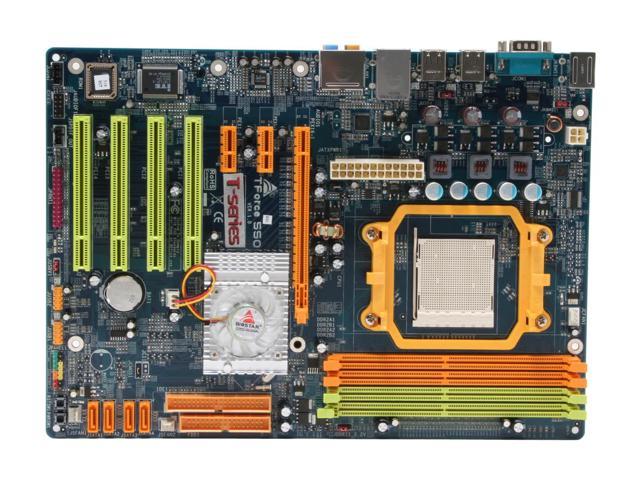 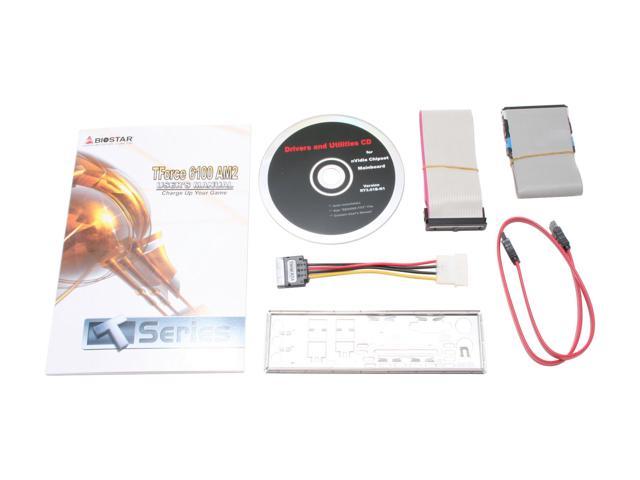 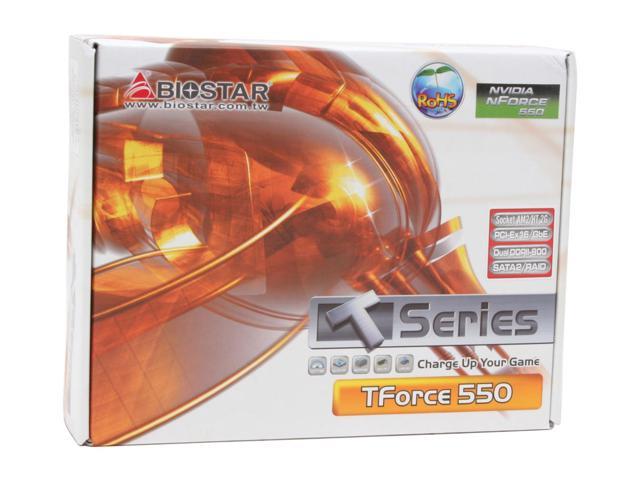 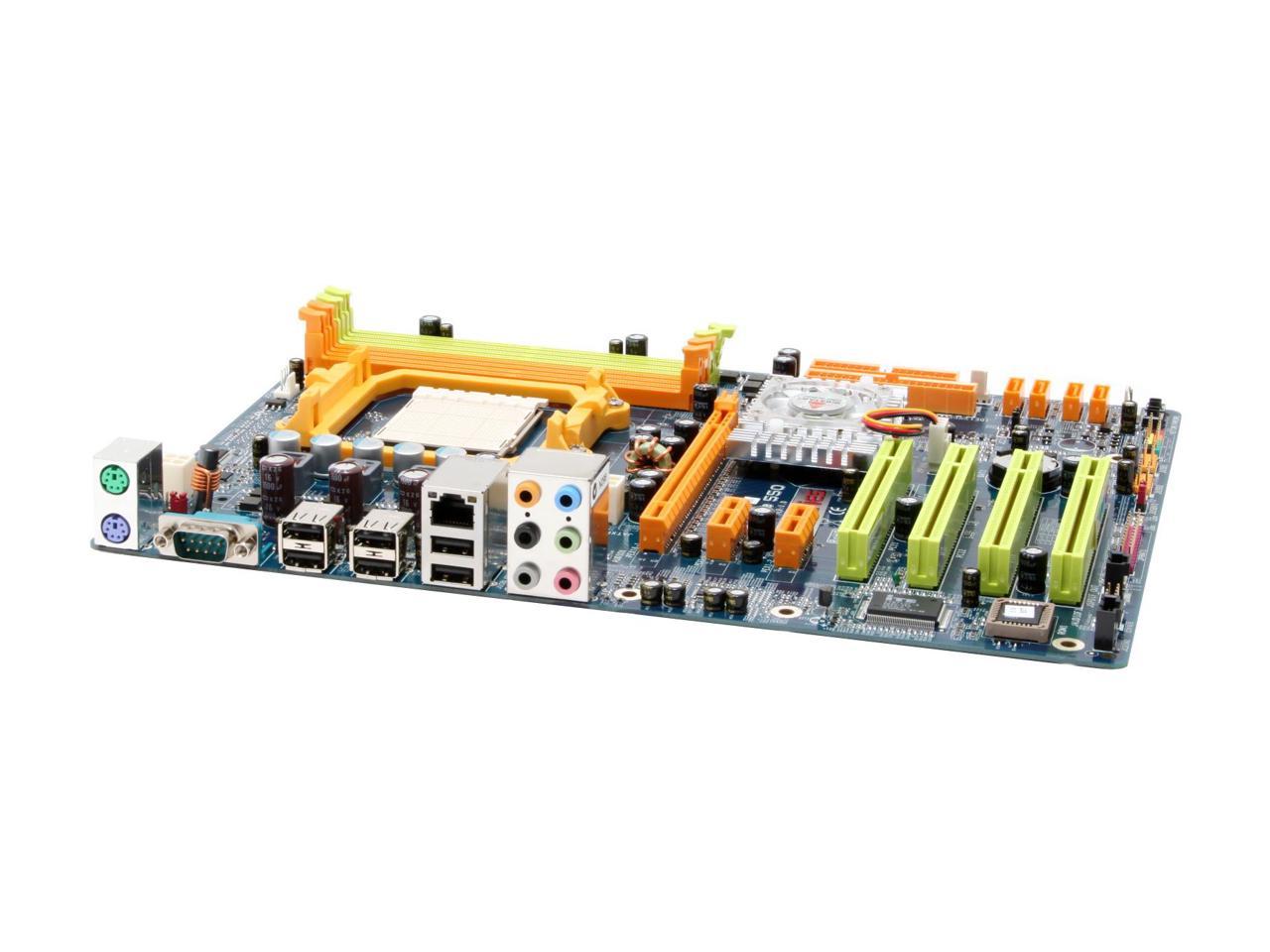 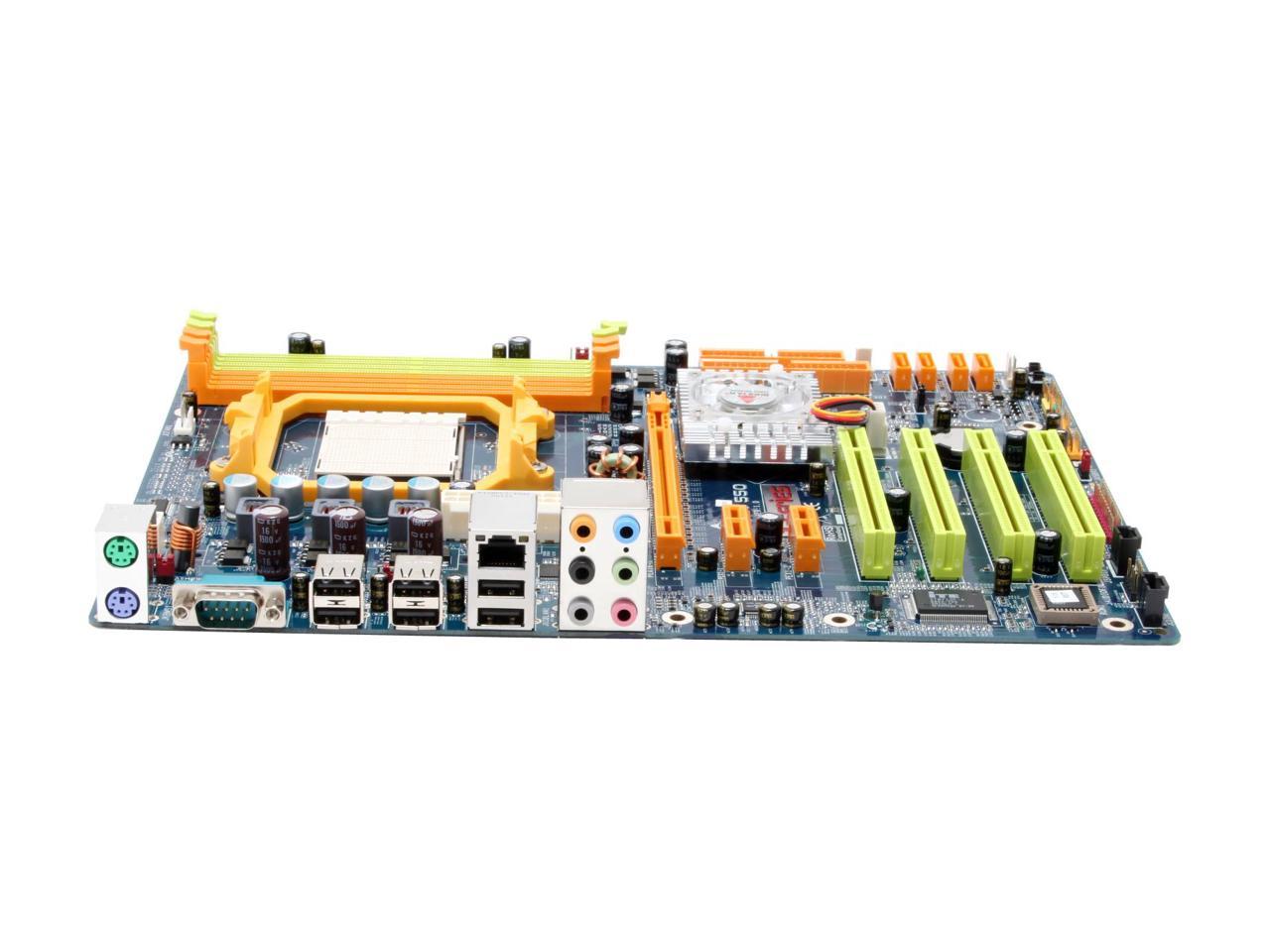 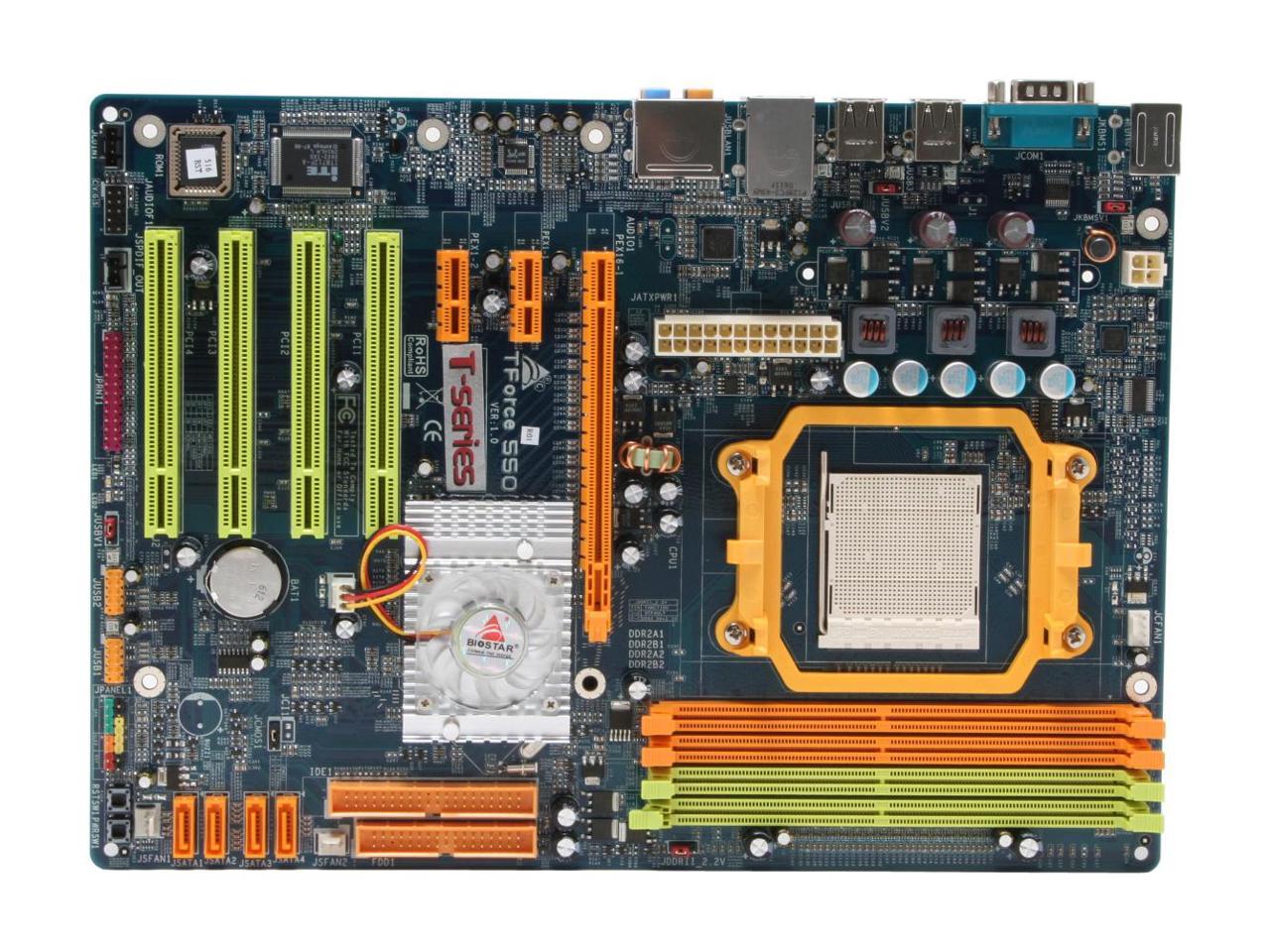 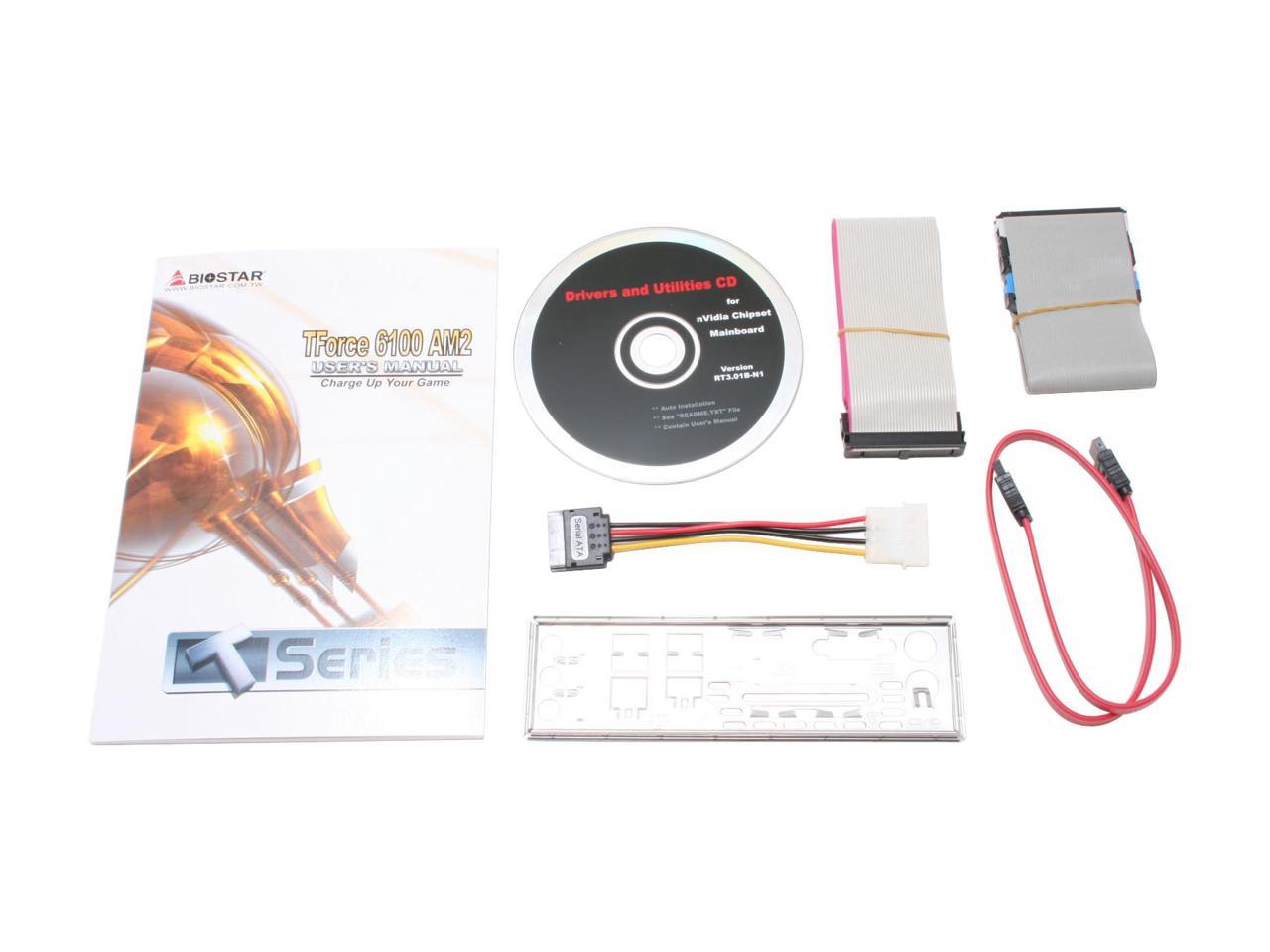 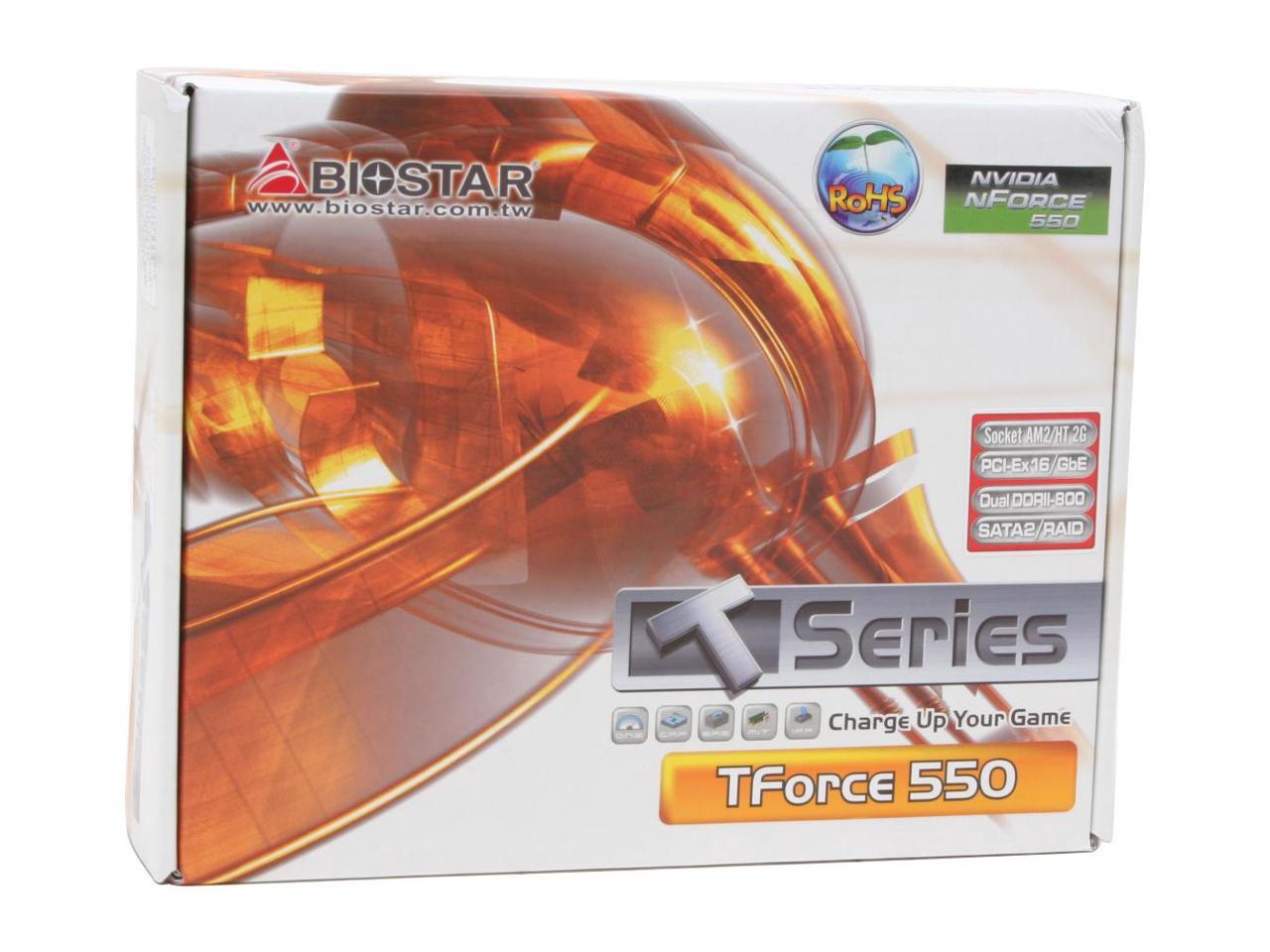 (251) Write a Review
OUT OF STOCK.
Overview
Specs
Reviews
The BIOSTAR TFORCE 550 is great, full-value motherboard if you're ready to replace or upgrade your system. Equipped with an AMD socket AM2, suitable for Athlon 64 and Sempron processors, including the X2 and FX series, this board will take most anything you can throw at it. Using the Nvidia nForce 550 chipset,it supports up to 4GB of DDR2 memory for supreme power. It also includes a gigabit Ethernet port, 7.1 channel onboard sound, and 4 SATA ports.
With those 4 ports, you can add multiple hard drives to the system -- managing them with RAID 0, 1, 0+1, and JBOD. Expand to your heart's and wallet's content with one x16, and two x1 PCIe slots, and an additional 4 PCI slots. Build a powerful system; the BIOSTAR TFORCE 550 can hold it all for you.

Learn more about the Biostar TFORCE 550

Pros: FAN ON THE NORTH BRIDGE. low cost Excellent overclocking features in the bios, both for new overclockers and those who want to fine tune their settings.

Cons: You get the features you pay for. Single ethernet, no SLI support, etc.. Nothink that really matters if your low on cash anyways.

Overall Review: I popped in an Athlon 3000+ and straight up overclocked it from 1.8 GHz to 2.4 GHz without the system failing to boot once. The fan on the north bridge is nice so you can step up the FSB without blowing your chipset.

Cons: Fan Utility Software does not load automatically with Windows.

Pros: Made for all types of overclockers. the integreated overclocking utiliies are crazy! i dont think any other motherboard company gives you overclocking features in the motherboard, most just give you a bunch of multiplier controls as "management" but not for overclocking! the hardware moniter is excellent, very well spaced. very colorful. the ram slots are close to the cpu, so i can have my ThermalTake Blue Orb(an awesome fan btw) hover over my patriot low latency ddr2 800, which run very hot at 2.2v. nice pouch comes with the motherboard, i keep all the manuals and accessories in there :) the onboard power buttons are very unique and helpful. plenty of sata ports, awesome since ide is going to be outdated very very soon.

Cons: when i updated the bios, it messed up my MBR, and couldn't find ntldr and stuff, had to use the repair utility on the windows 2000 disk. the live overclocking software has started freezing my comp, i think i gotta update the software. very good looking and colorful board, too bad people cant c it in my case :'( all of this is very minor, and i love this board.

Overall Review: not really a board problem, but the nvidia drivers were a pain in the... to install. they required windows 2000 service pack 4, but i only had regular 2000. and the onboard ethernet is nvidia so i couldn't get internet to work so that i could get the service pack. i had to use a netgear pci card to install sp4 so that i could install the drivers. not really biostars fault. i wish the biostar 590sli wasn't so expensive :( i want to use it on my next "just for gaming" build. Latest Build: Apevia X-plorer Blue ATX Case, Seagate 320GB Hard drive, AMD Athlon X2 4600+ (65W), Biostar Tforce 550, Sapphire Radeon X1950 PRO 256 MB, Antec Smart Power 500W, Patriot eXtreme Performance 2GB(2 x 1GB) DDR2 800 Latency 4 Dual Channel, Lite-On 20X SATA DVD Burner, ThermalTake Blue Orb Cpu Cooler. Any questions? Drop me an email at pancholip@gmail.com

Pros: Bought this with the Brisbane 3600 combo, 2GB G-Skill DDR 667, Sapphire X1950GT, Ultra V-series 500w PSU and Ultra Wiz case, and 160GB WD SATA, AC64 HSF. Posted on 1st try, running great, haven't tried any oc yet, just running a 80mm front and 120mm rear case fan, system stays super cool, monitored temps during Quake 4 (all settings maxed 16x HQ AF, the works) and it never went above 65 GPU and about 35 system, lots of headroom. Probably won't overclock much, I'd rather see this puppy lead a nice long life. I scored my 19" CRT for 25 bucks and optical drives for really cheap, all in all I spent about 550 bucks for this system, not incuding an OS. I'd like to thank Sony for making the spending of 600 bucks for something far more useful easier to rationalize! All in all very pleased, check out this article about the Tforce on anandtech, its becoming quite the popular affordable gaming board,

Cons: RAM slots are pretty close to the CPU, maybe thats why it benches so well, but I'm going to have to change my HSF before I go for 4 GB RAM. (thats a bit of a knock on the HSF too, the one I bought is HUGE) The single IDE thing is something to consider if you have more than 2 IDE devices you need to put in.

Overall Review: My bold prediction is that this gaming rig will run Crysis nicely and having VISTA and a DX10 card will cancel each other out performace wise while only giving marginal improvements in visuals. When Doom 3 came out all a DX9 card did for it was some kind of shimmering heat effect, people who run out and spend 650 on a vid card and OS for something that wont be out for another year make me laugh. Ill take my DX10 card when they are good and cheap and theres an ATI one to compete with, thats when things will be interesting.

Pros: Install was easy. Plenty of room for all the stuff I needed to add, although first RAM slot is a too close for large CPU fan. Instruction manual is about 98% helpful for most things.

Cons: Setup was a struggle until I decided to try a USB keyboard. Both PS/2 ports for keyboard and mouse are dead right out of the box. Then I have no sound, but a mystery PCI device is found. Had to track down drivers for the onboard sound card. Still, no sound. Went to BB for sound card and now all is good.

Overall Review: Rather than deal with a return for a new board, I just decided to live with the DOA ports and sound card. In the end, I'd buy another one for my next project.

Pros: It recognized the 65nm Brisbane that was bundled with the board. Enough over clocking features in the BIOS for me. Ten USB ports. It booted right up with my existing Windows and didn't give me any problems reinstalling the drivers (Previous system was an MSI board, Athlon XP 2700+).

Cons: I had to stomp on one of those eggs for a couple of reasons. First off, the RAM and the CPU sit too close. If there is a heatsink on the RAM in the 4th slot a big CPU cooler will hit it and bend it a little in the RAM slot. I'm actually going to have to grind a little of my CPU heatsink off in order to clear my next gig of memory. Second, I wish the board had optical out. It does have pinnouts for spdif, but I use a separate sound card with optical anyways. And last but not least, the NB fan is the only arfin' thing I hear from my computer and it erks the hell out of me. I can't put a passive heatsink on it either because my graphics card sits right on top if it.

Overall Review: I was very pleased with how solid this board performs. This is my first go around with Biostar anything, and they didn't kick my hole. Like most boards this one came with some novelty programs (i.e. they look good sitting on a shelf). The overclock program is worthless (I say that about every OC program though :). I found the BOIS update program to be a pain in my hole. Oh, and why can't board makers spend an extra quarter and make a decent I/O panel?? I would be happy to pay the price. My lively hood ~ This board (duh), 3600+ X2 @ 2.13ghz, 7600gs w/ passive cooling (shhh), 1 gig OCZ DDR2 800 @ 427mhz, Turtle Beach 7.1 sound (surprisingly a great card), 80gig/400gig sata's, antec 500watt, wired and wireless Network, 2 NEC DVD burners, and a couple of super duper Sh--ty CRT monitors

Cons: I read that it does not overclock well.. haven't tried yet.

Overall Review: Mobo's stock RAM voltage is 1.95V, which will need to be raised for higher rated RAM (mine is 2.1V RAM). Overall, an EXCELLENT motherboard.