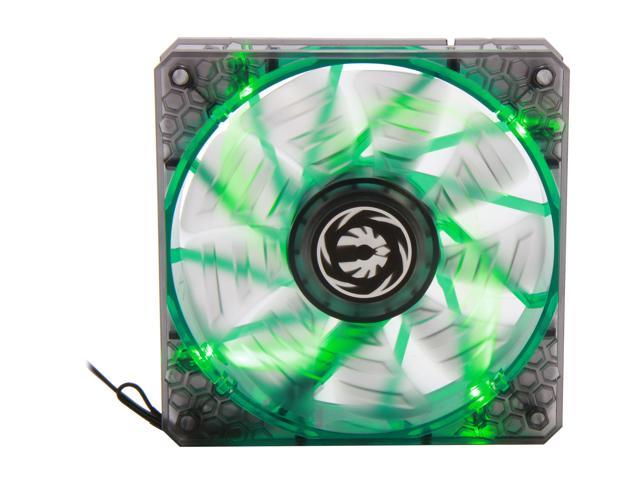 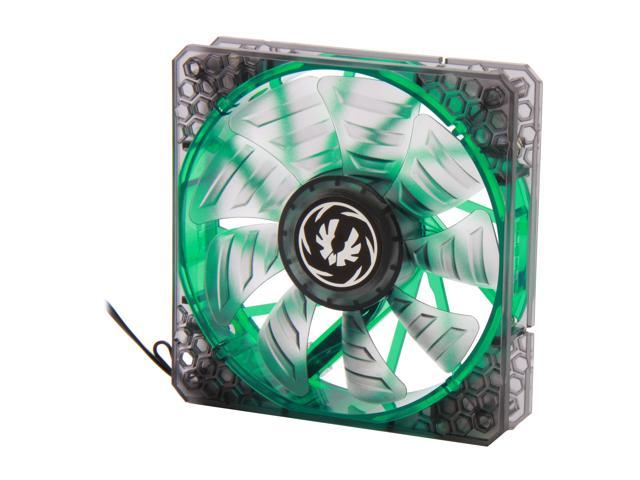 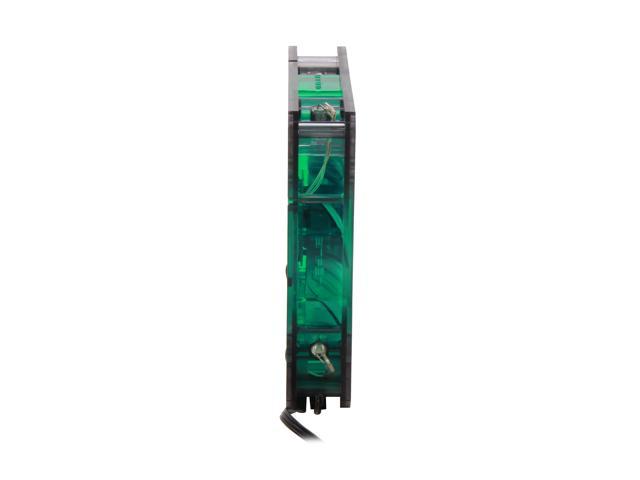 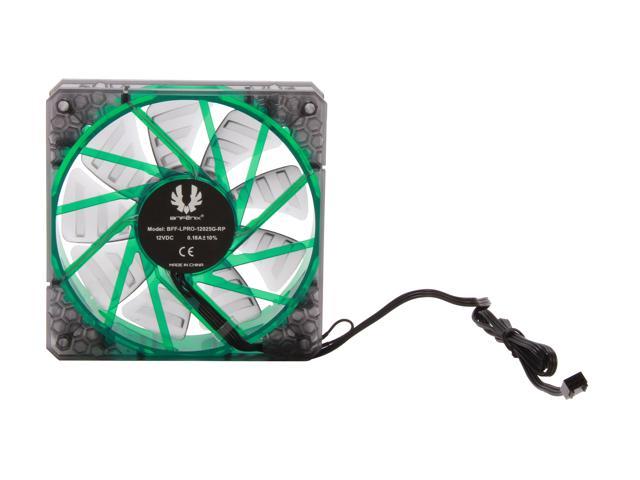 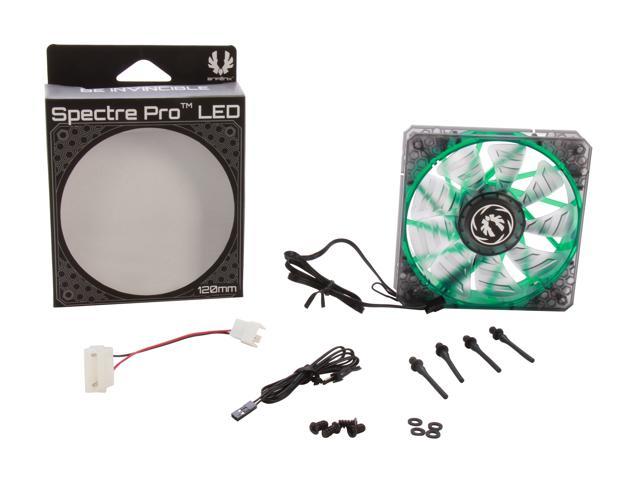 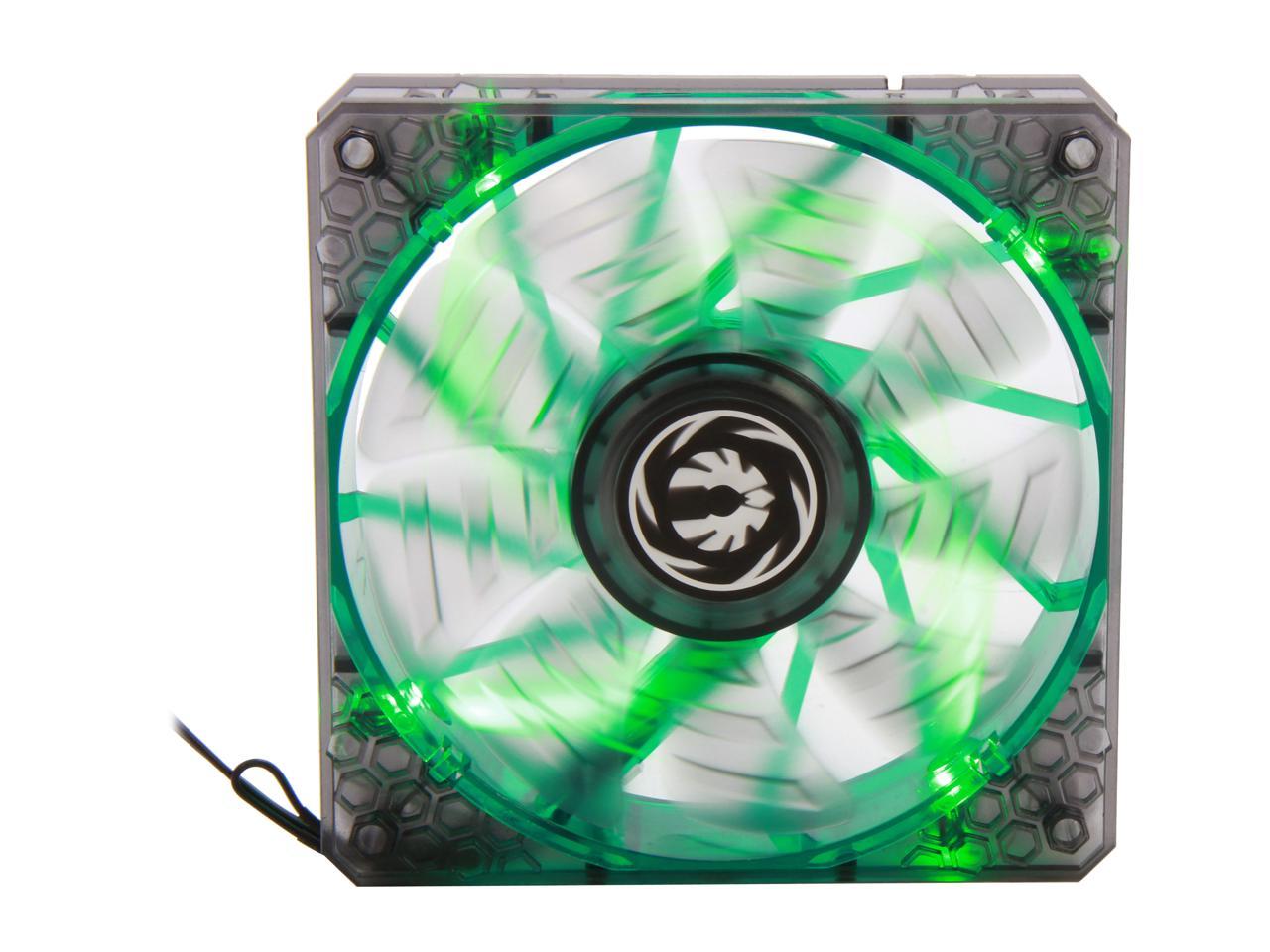 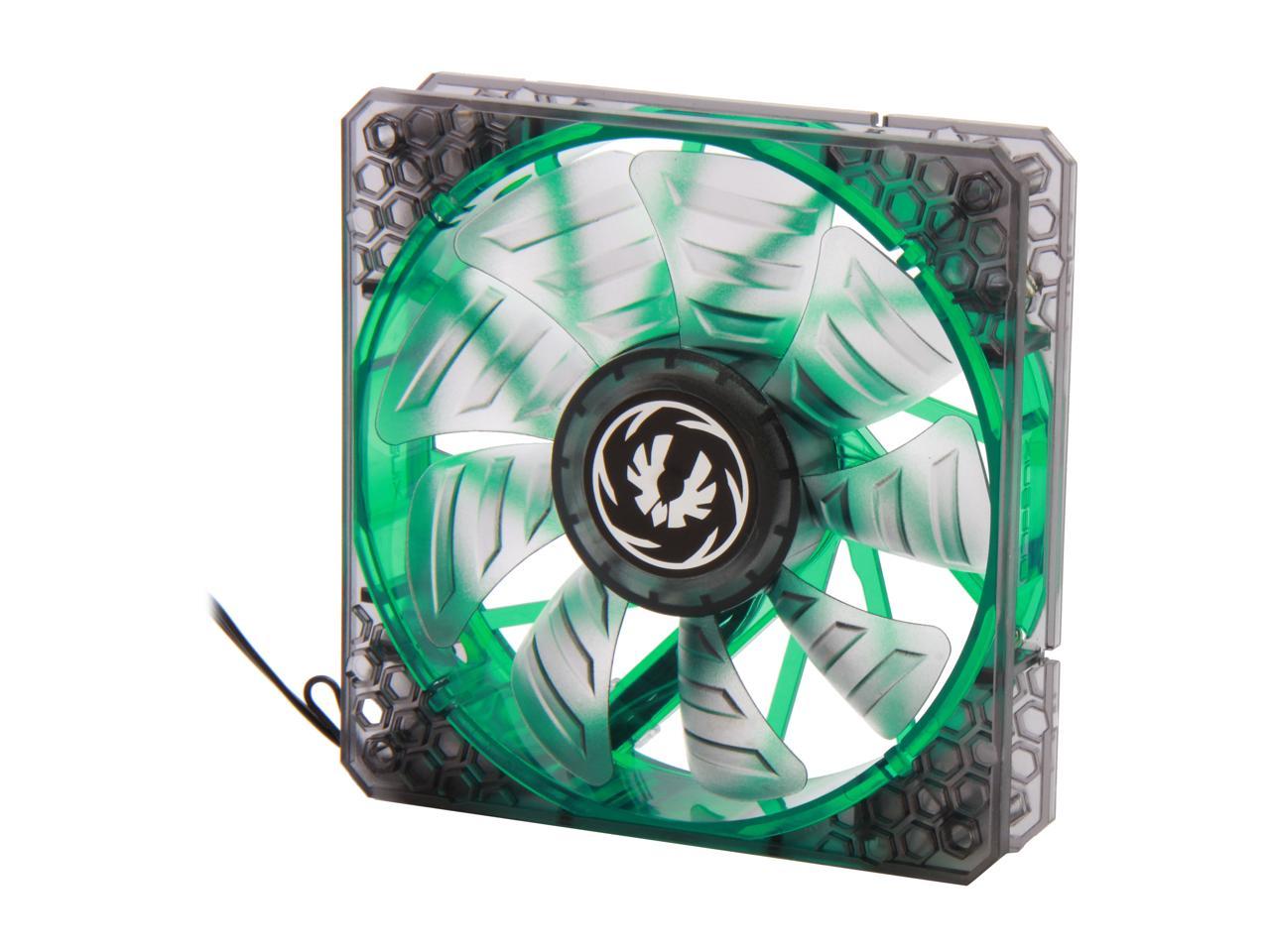 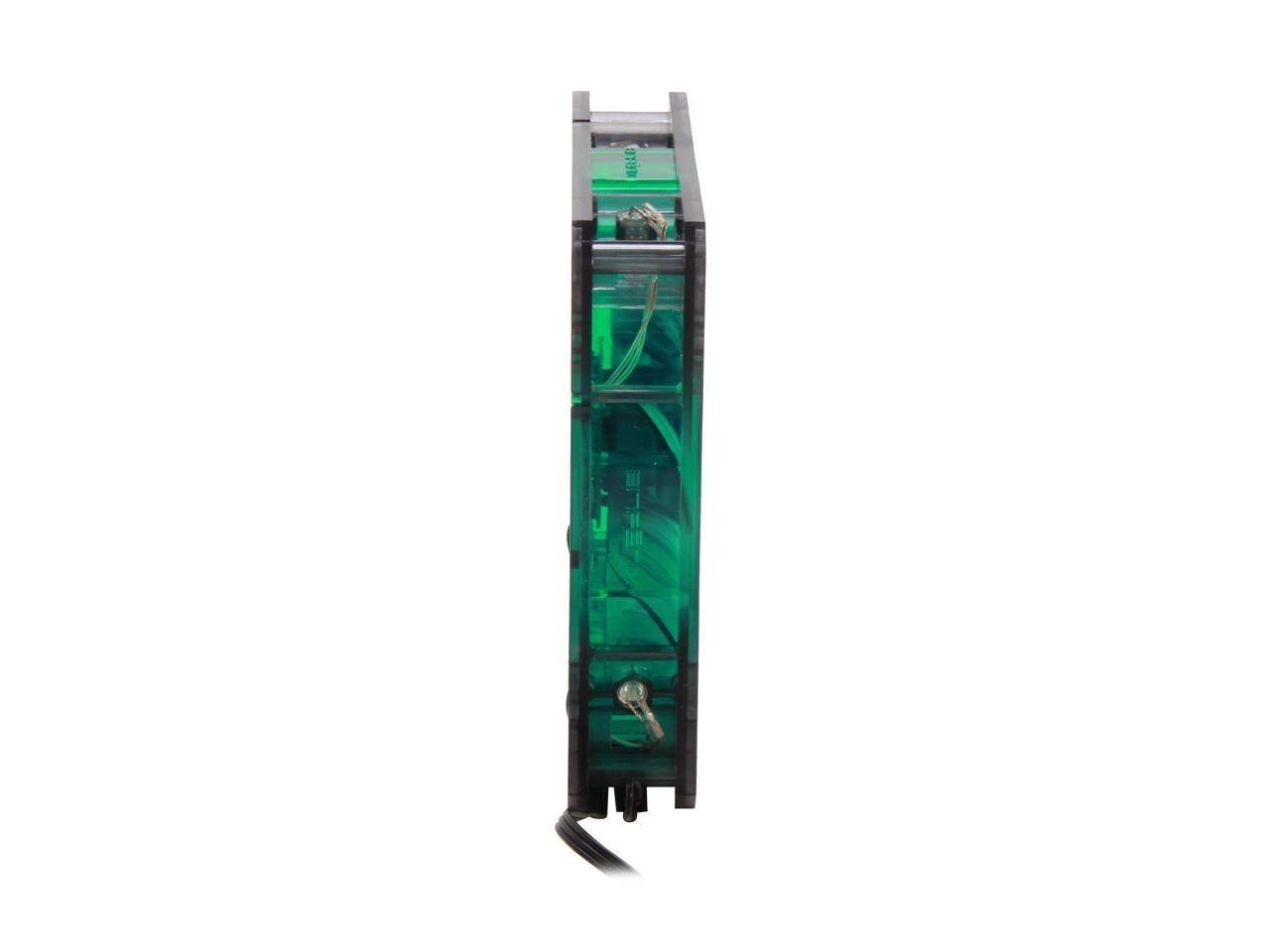 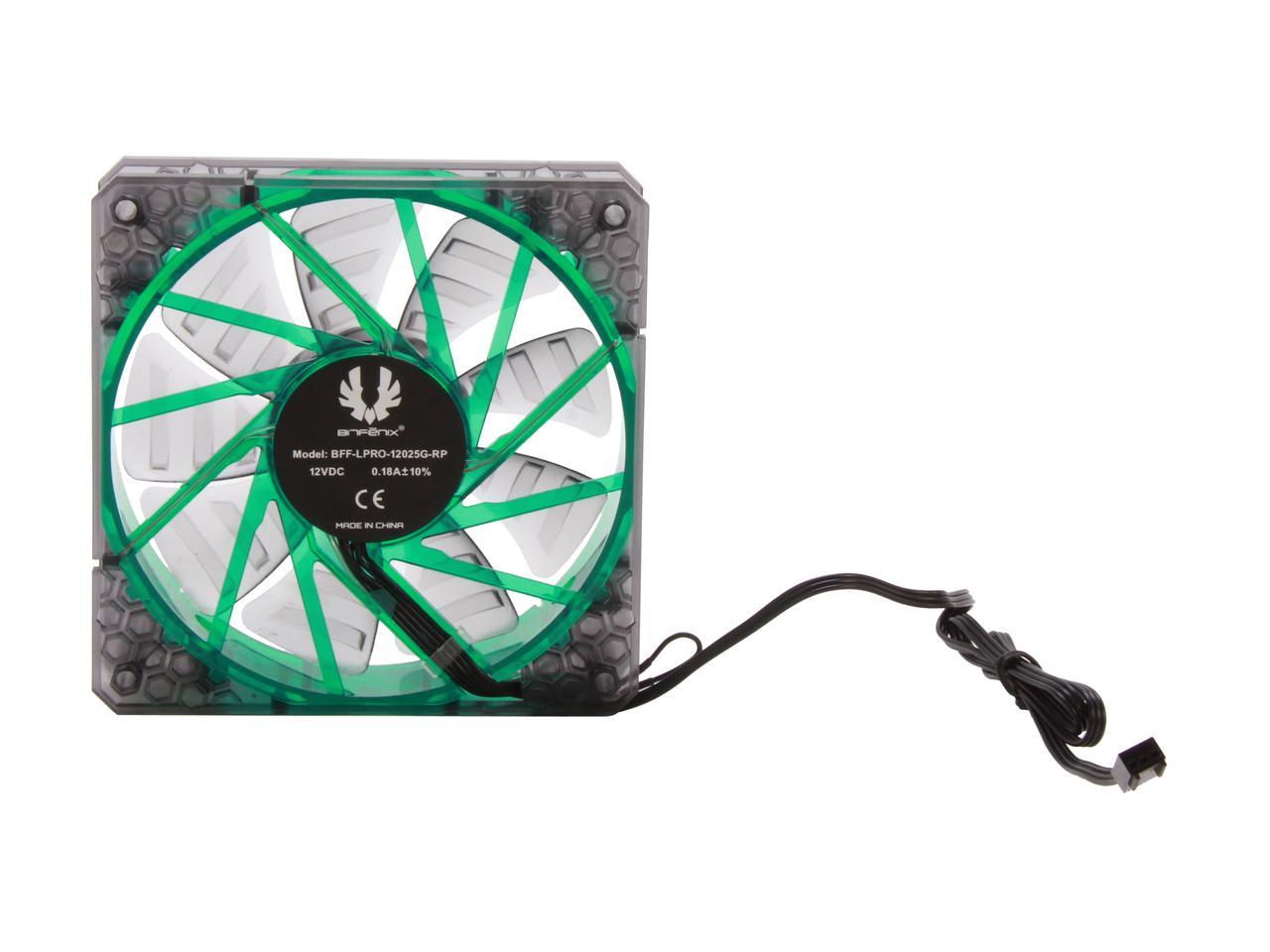 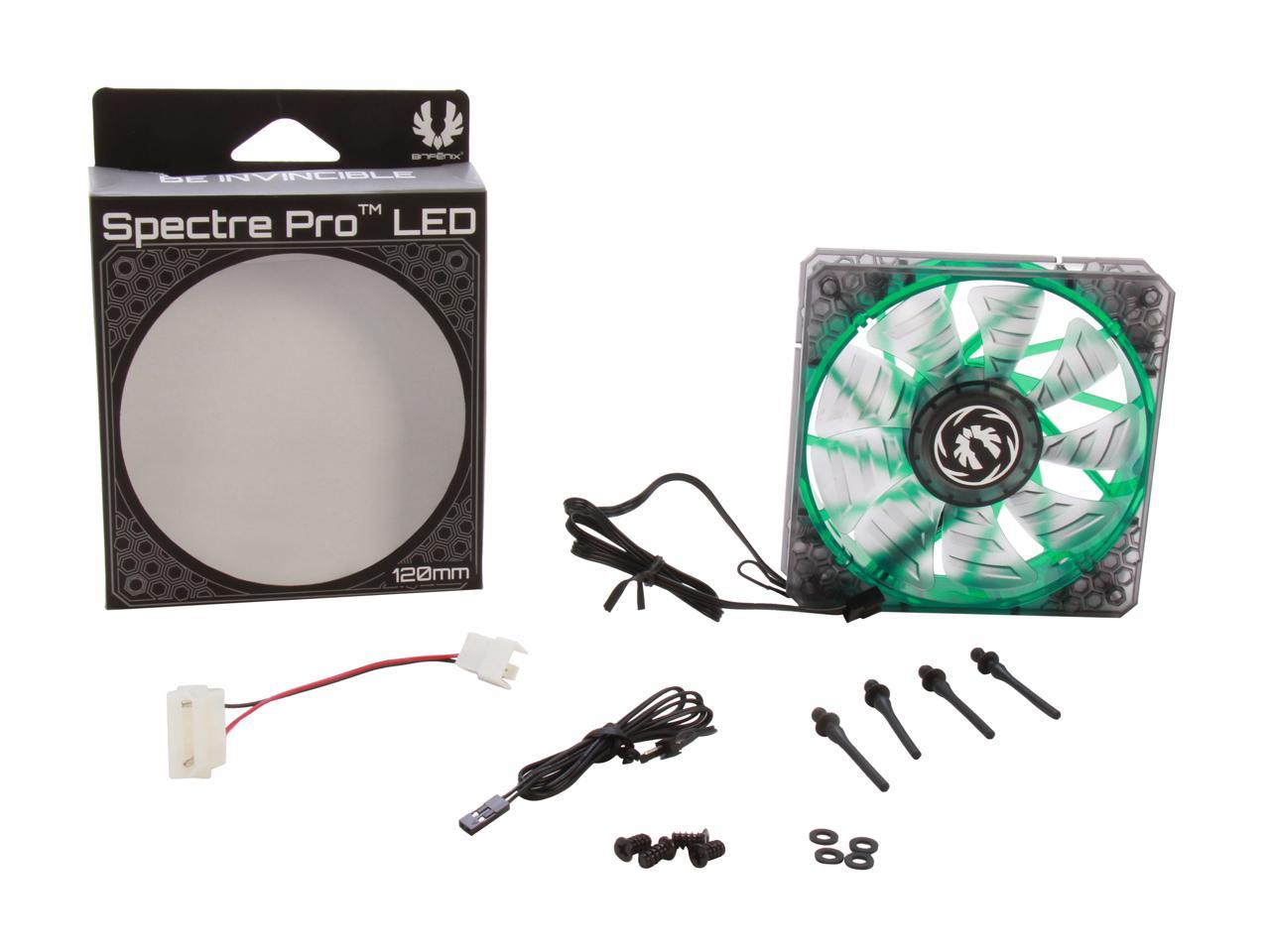 Following the success of the Spectre LED Fan Series, Spectre Pro LED ups the ante with an all-new design and enhanced performance. The high pressure and CFM design produces wicked cooling and is also perfect for watercooling setups. Its dual frame construction not only looks great, but also helps to dampen vibrations that cause unnecessary noise. Reinforced fan blades prevent warping at high RPM levels, while focused airflow ensures cool air can reach all of your installed components. With FDB technology for low noise and long life, multiple color options, and on-the-fly light switching, Spectre Pro LED is the new gold standard in performance case fans.

Pros: Moves a lot of are through my 120mm raditior, they look great as well. I like the extras they give you with the fan to accommodate any build.

Cons: 140mm were out of stock so I couldn't stock my case with more of these fans.

Overall Review: fan screw holes are not supposed to be pre-threaded. Thats why there are special fan screws for fans. Don't know why people are lowering their rating because they didn't research first.

Pros: -Very durable -LED colors are clean -Fan blade design is exellent -Comes with lots of goodies -Quite, yet powerful

Cons: -Mounting holes are not pre-threaded -No instructions at all; but its a fan, duh -Hard to get, Out of Stock often

Overall Review: Once again BitFenix sets the standard in my book. These fans are just such good quality. Just by looking at them, you can tell that BitFenix is concerned more about quality than they are about sales quantity. The Spectre Pro series is the best, don't settle for their regular Spectre series, Go for the Pro. This brand has the best Noise to CFM ratio I have ever seen and the price fits just right. I am using this as my rear exhaust fan. One thing that I do have to say is that these may not cool as well as some others such as Noctua(costs about $10 more and isn't LED) or other brands. However, the difference is less than 5degrees C. To me, that is negligible. I have no problem keeping my system cool, I have 19 fans in my tower >_< The benefit of the noise reduction with high enough CFM, a quality build and a good price... is unbeatable. These fans are very hard to obtain through Newegg, they go out of stock constantly. If you cannot find them here, search elsewhere. I promise they are worth it.

Pros: Looks cool. Very bright LED, so it's going to be noticed. Very quiet, don't even hear the fan at all and good air flow.

Cons: The screwholes aren't pre-threaded, so screws can get stuck if you're not careful, which didn't happen to me. However, since you're threading the screwholes as you are screwing it with a screw, you have to apply a significant amout of torque, which causes the outer frame to bend away from the inner frame to the point that you think it is going to break. Luckily it didn't. Should have pre-threaded the screwholes at the factory to avoid this problem.

Overall Review: This fan overall is a great fan. I would screw in all the screws all the way, with someone else applying counter pressure to the outer frame while you're screwing, before you try to mount it.

Overall Review: Already bought another for another replacement, and will buy more in the future.

Cons: - Loud clicking noise - Not much airflow - Not worth the price

Pros: I have the 120mm and the 140mm versions of this fan and I love them. They have been installed since early 2012 in a computer that runs nearly 24/7 and have had no issues. They shed dust well; I think I might have cleaned them twice in almost 5 years, they move a lot of air, run quiet, look and feel interesting (the honeycombed plastic makes them quite flexible), and have a great green tint that isn't overpowering. Now that a Zalman, a Corsair, and two Cooler Master fans that were purchased at the same time need replacing, it is clear which fans are the better ones.

Cons: They didn't install themselves

Overall Review: They may be pricey, but they're worth every penny.

Pros: Price, Looks. I have purchased four of these fans and installed them into a mid tower case, Plenty of hardware for connecting and mounting them.

Cons: Not as much air flow as I would have hoped for, I have other fans saying the same cfm rating and they all seem to push more air. One of them has a small noise to it at only a couple days old so I will have to see whats going to happen with it.

Pros: Sturdy! I can't say enough about this. The screw holes are solid plastic tubes NOT just a hole cut in the frame! This is a must for me. Some of the other "brand name" companies only drill a hole in the frame. Doing so causes flexing which in turn causes the fan blades to rub against the frame. Green LEDs are perfect. A true green not some off color and they all match! If you're unfamiliar with LEDs... it's not uncommon to have serious variations in color. There are many factors which may contribute to this but BitFenix avoids them. Enough said. Connectors - the LEDs are piggy backed to the main power supply. You can unplug the LEDs if you want a dedicated controller but for those that don't... it saves you a ton of connections! Liquid Cooling - as stated in other reviews, the CFM is a bit lower than others, however, my 4790K sits at 53C (4.5 Ghz) while running Final Fantasy 14 over a triple monitor setup @ maximum settings. The cooler is a Corsair H50. Two fans in push/pull configuration. I have 8 of the 120mm fans in my case! They give it a nice solid glow without the blinding overkill of superbright LEDs.

Overall Review: You can stop your search now. Add to cart and enjoy your purchase!