Feel 100% satisfied with your purchase -- with no restocking fees & no return shipping costs* within 30 days of delivery. Learn More
Price Alert
Add To ListFound on 32 wish lists 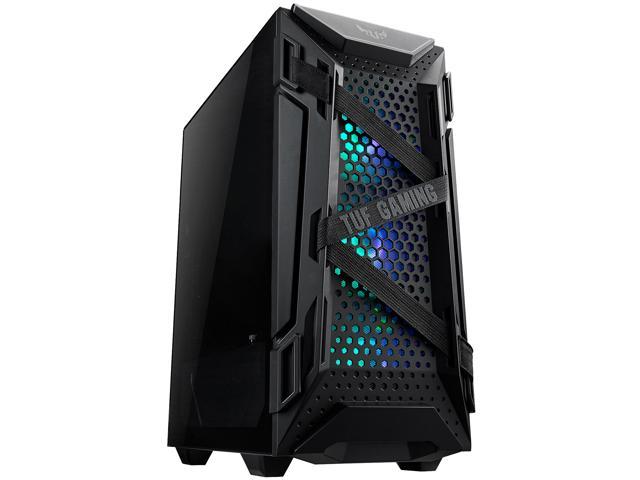 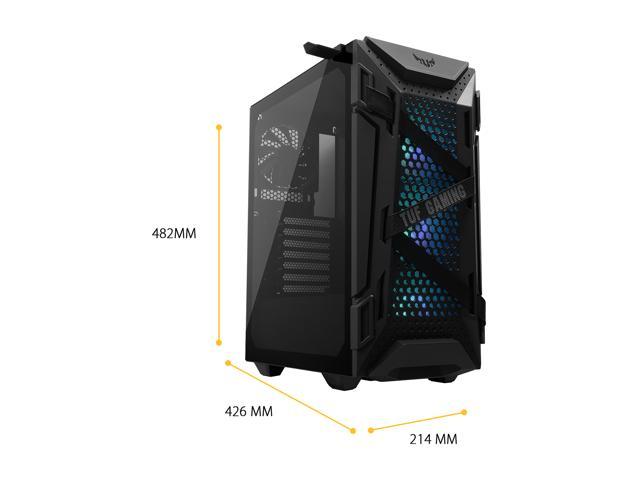 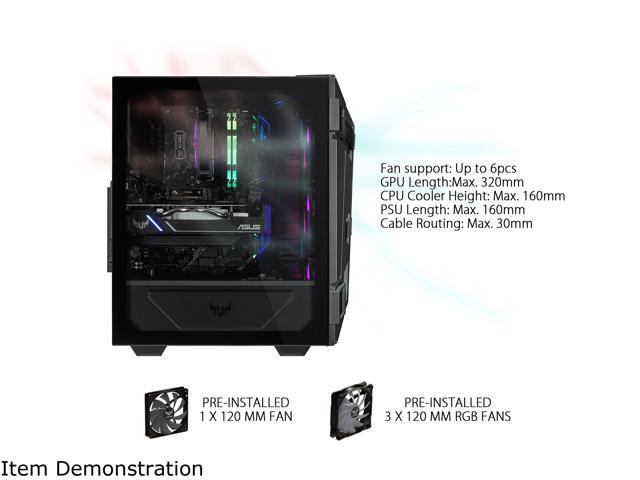 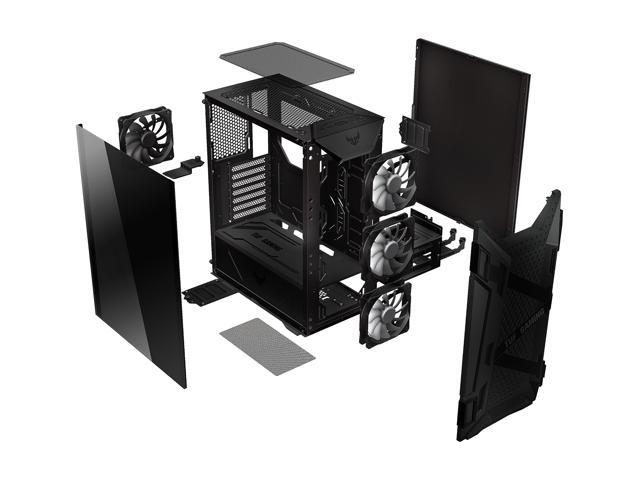 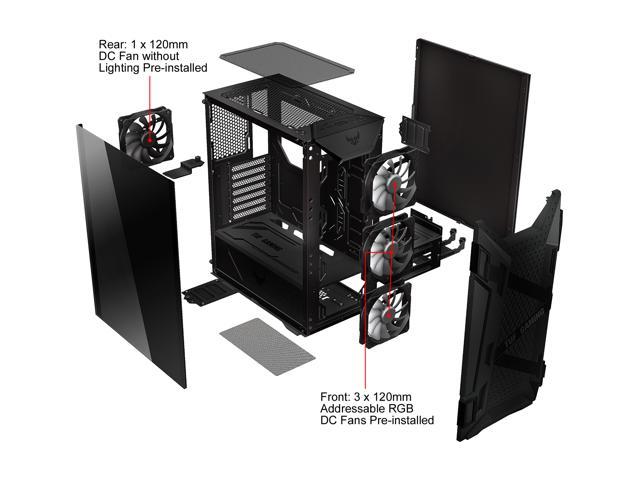 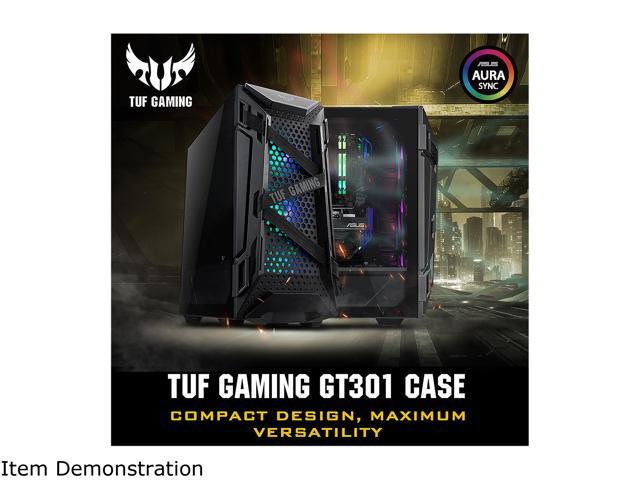 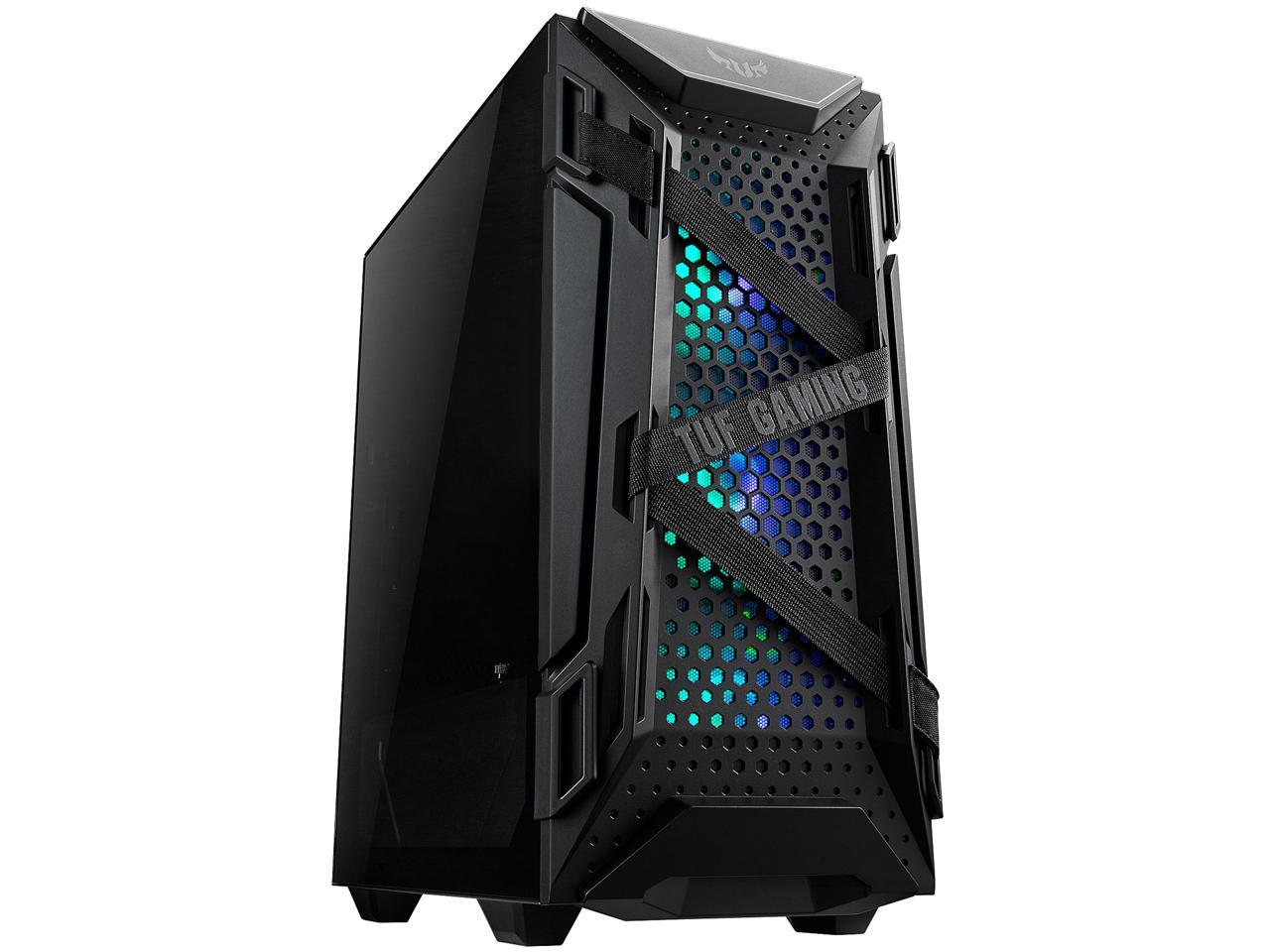 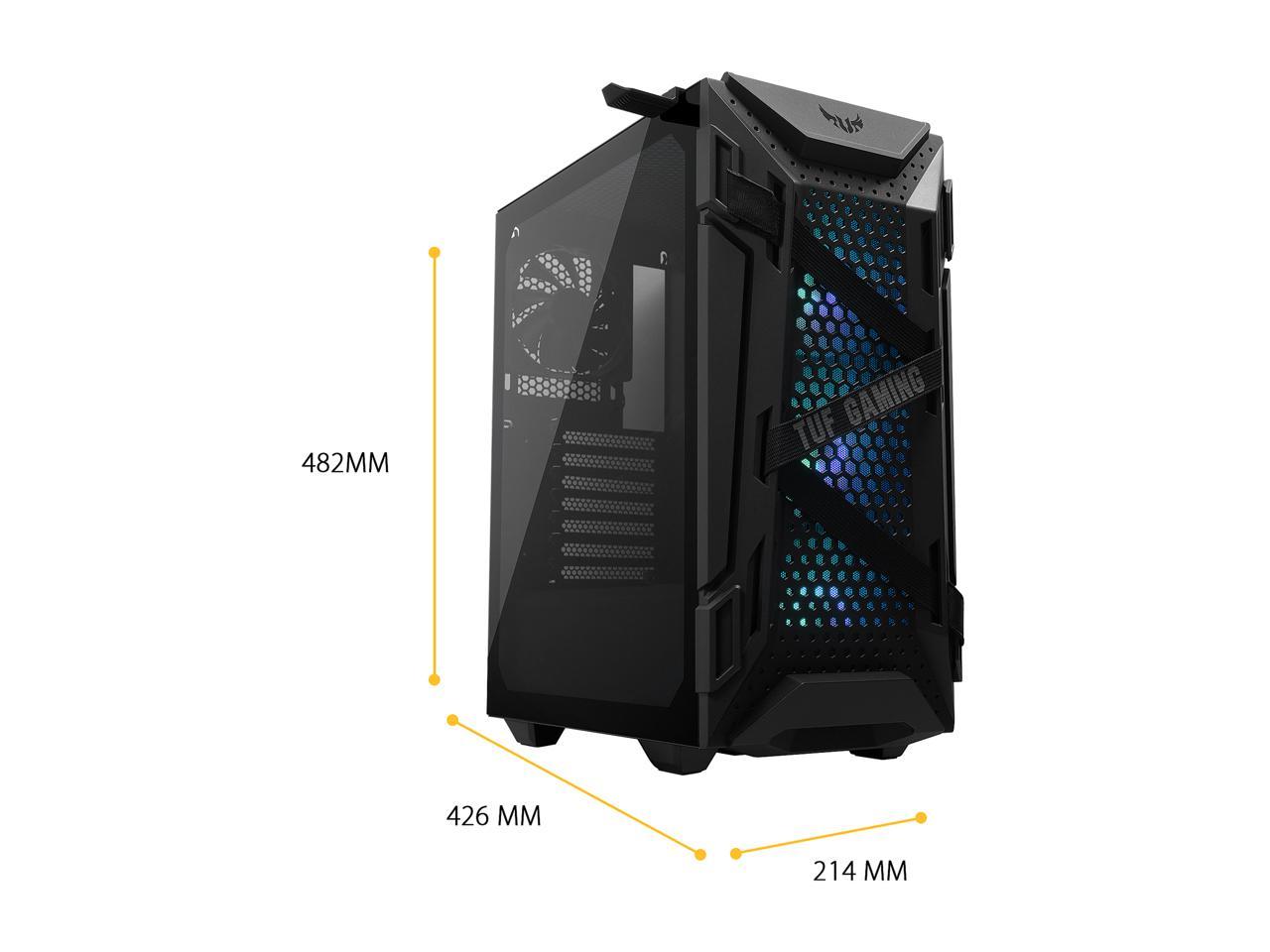 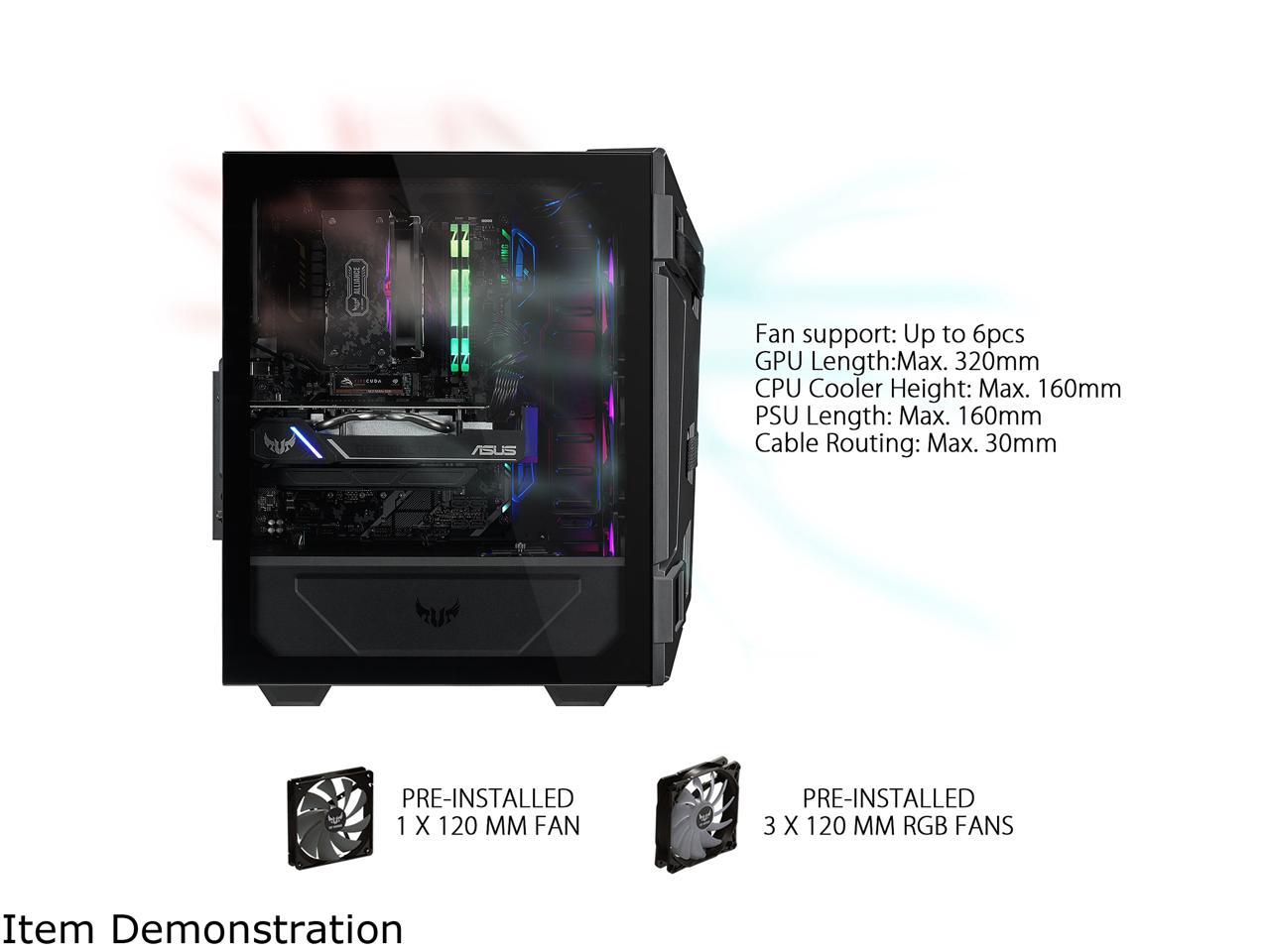 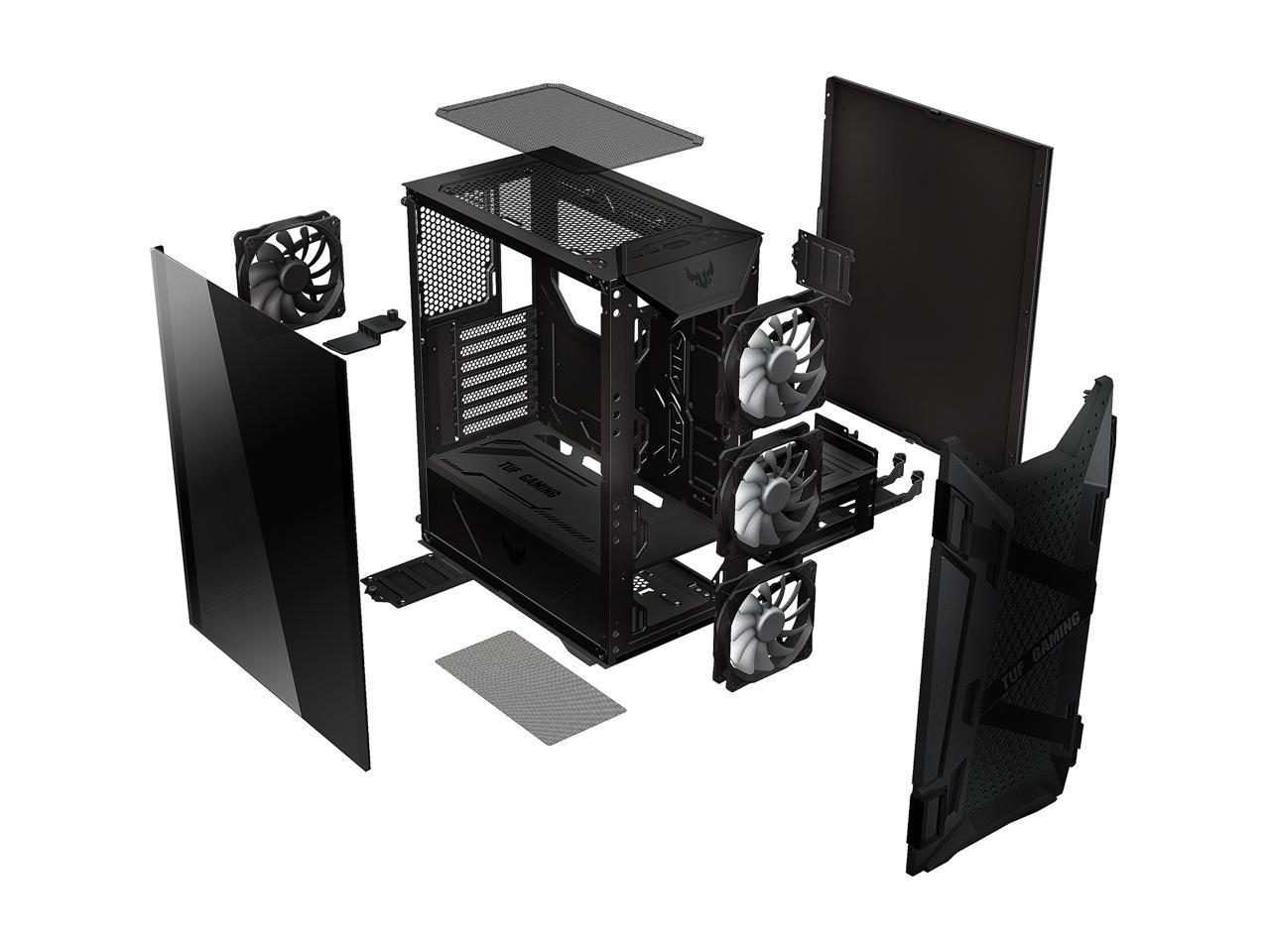 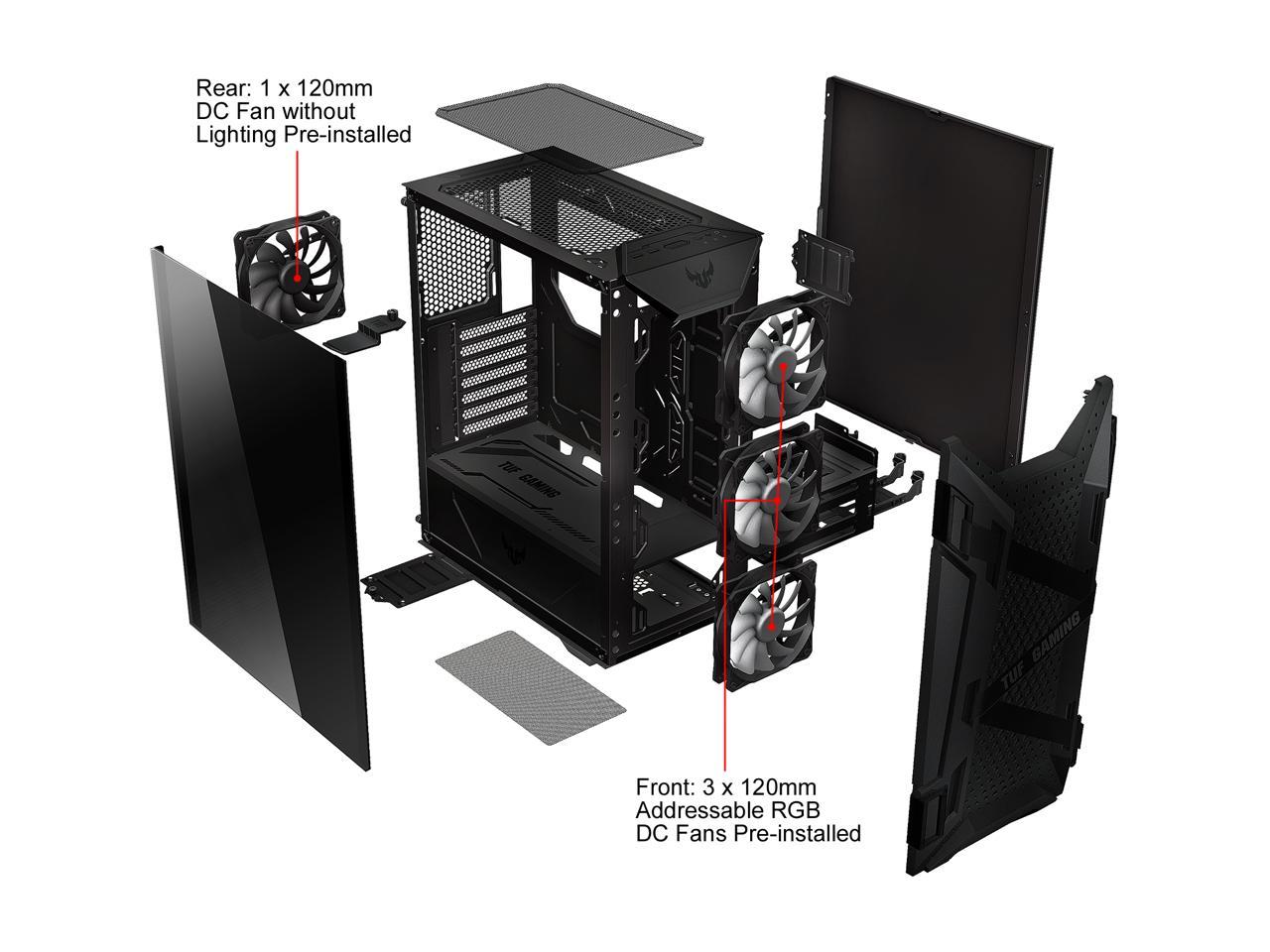 Learn more about the ASUS GT301

Cons: Front fans are not PWM. Small "TUF" branded AIO does not mount in the top of case as neatly as you would expect it to. Holes for cable pass through of 24 pin connector are above and below the connector on the "TUF" motherboard. Does not include vertical mount riser or hardware, maybe not a con as everyone has there own idea if acceptable performance loss? Rear fan is not RGB. The picture doesn't lie, the lighting from the fans is very subtle.

Overall Review: This is my first build in about 8 years, things have definitely changed, M2 drives, ARGB, RGB... So many things to consider. I bought a TUF motherboard, seemed a no brainer to buy the relatively well priced matching case, especially since now everything is about showing off your lighting. This case replaced a well worn Tsunami Dream that had to be highly modified to breathe right. This case does not appear to have breathing issues, but I am replacing the front fans, and adding a halo to the rear. I did use a LIan Li Strimer (a)RBG 24 pin extender, hence my complaint about the holes not lining up with where it plugs in on the motherboard. I'm sure that doing something like this was not even considered when the case was built, but instead of it looking like the Strimer is feeding life into the RGB memory at a cool 90 degree angle, I have what daughters feel is rainbow in my "TUF", "manly" case. I will most likely be pulling everything out and slotting the hole. The I/O shield was a bit wonky in the hole but I could not determine which item was at fault? Since the I/O shield is much flimsier it lost the battle with the case. I really do love this case, it was a joy to work in and on, the rats nest of wiring for all the added lights as well as the normal stuff is still waiting for me to neaten it up when I'm satisfied that everything is where I want it, there is plenty room to make everything inside the back of the case look as nice as the front. The case does have a lot if area to cover with lighting, to balance the look, it really does need a halo on the rear fan, and some Team RGB SSD's, which is a shame because with two M.2 drives who needs SSD's?? I'm just glad my wife won't read this! She'll never know about the extra hundreds spent to have "pretty lighting" inside a "TUF" case. I would like to add that if you are attempting to register your case with Asus the Type of equipment is an optical storage device, not a computer case. I spent a great deal of time with Kevin B. in a chat session trying to get this straight, Kevin is probably not actually named Kevin but we eventually resolved the issue. Today I received a call from Asus customer service wanting to ensure that my issue was resolved. I have been using Asus products for nearly 20 years, I have never had to contact customer support for anything. I'm not sure about those who claim to have issues with their support, having been done wrong? Yes there is a language bearer, but these products are made in another country, where they speak another language, duh! In short, yes I'm a "Fan Boy" or more properly a "Fan Old Man" but their products have served me well!

Cons: - Expensive for not including Noctua case fans ;)

Overall Review: You will find yourself staring at it sometimes, go for it my friend.

Pros: -Lots of space and lots of room for cable management -GPU riser slot -tonnes of Space for many different rad and fan configs

Cons: -lack of drive screws for mounting. The case holds 2 2.5" and 4 3.5" but there are only enough screws to mount 4 (if you use 4 screws/drive) -The shroud for the PSU and bottom 3.5" drive bays is very awkward and requires some tricky positions to feed the motherboard connections through the top hole and get the shroud in place

Overall Review: This case is amazing. It looks great and is well built and has lots of room for upgrades. The glass panel is amazing to look through and the thumb screws being attached to the panel is very convenient.

Manufacturer Response:
Dear Dalton, We're very glad to hear the positive feedback with your ASUS product. Please note, the main purpose of the hole on top of the PSU shroud is for the GPU cables, which is why it is hard for motherboard connectors to position and fit through. If you have any specific questions in regards to your PC case, contact me directly at cl-justin@asus.com. Thank you for choosing ASUS! Best Regards, Justin ASUS Customer Loyalty - US Support
Anonymous
Ownership: 1 day to 1 week
Verified Owner
great tower8/8/2020 11:13:28 PM

Overall Review: did 2 pc's with the same case both turned out so nice

Pros: This case is premium in everyway I can think of and very nice looking as well. Mine came in perfect condition with no flaws. Someone did their homework when designing this beauty.

Cons: The packaging did arrive showing what the product was without any outer box. To my surprise I walked out to my back garage to see if it had arrived and sitting there in broad daylight is a blazing red box emblazoned with the ROG logo the size of my mini fridge just sitting out in the open screaming steal me. This con is not ASUS fault but I think Newegg should reconsider how to ship these to their customers considering they are paying $300 for it.

Overall Review: All in all a great buy for those with high end builds. You will not be disappointed.

Pros: Easy to remove front cover unlike a lot of other cases. Huge space for being considered a mid tower, great for people like me with big hands. The side panel for cable management has lots of space for your wires and makes it easy to remove and reapply the cover.

Cons: The rubber fittings for wire passthrough like to come out easily when feeding the power supply cord (at least for my PSU). It’s kinda hard to get them back into place with the wires in the way.

Pros: Really enjoy the design of this case. The aesthetic really sits well with my current build. Its a solid sturdy case when all of the panels are attached. Its a very open case with a lot of space. Plenty of options for storage and plenty of space to hide the power cables. The included fans push a lot of air reasonably well even through the included dust filters and the RGB adds a little flair. The magnetic dust filters are a nice touch as well. There is plenty of space behind the motherboard tray to allow for easy cable management.

Cons: There are some downsides to this case but none are deal braking for this case. The included front fans are 3-pin connectors so you don't get as much control as you would want. It also limits the use of fan controllers since not many allow the use of 3-pin fans. The holes in the motherboard tray don't line up with the 24-pin ATX power connector on the motherboard for the cable so there is some bending involved. When the side panels are taken off the case becomes very flimsy, so accidentally putting pressure on the case could cause it to be bent out of place. This makes it difficult to get the power supply shround back into the case since the screw holes will then become misaligned.

Overall Review: Yes , I recommend this product to everyone .