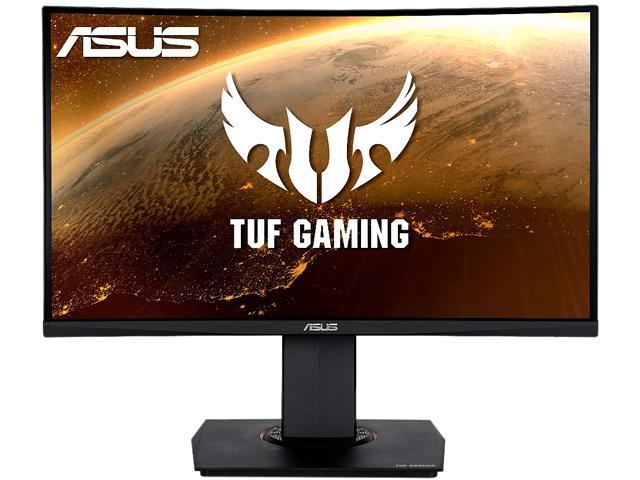 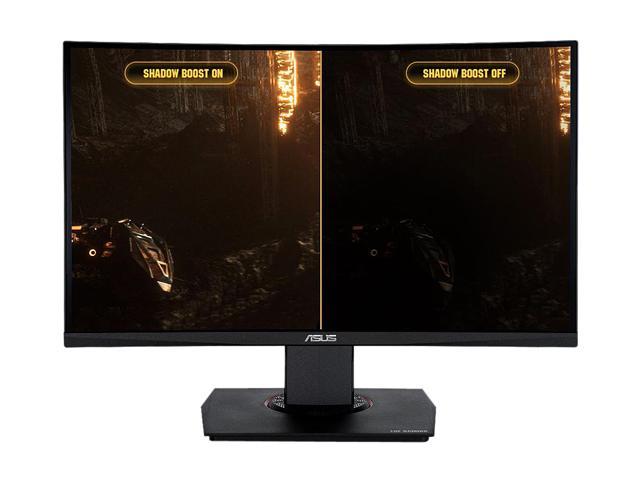 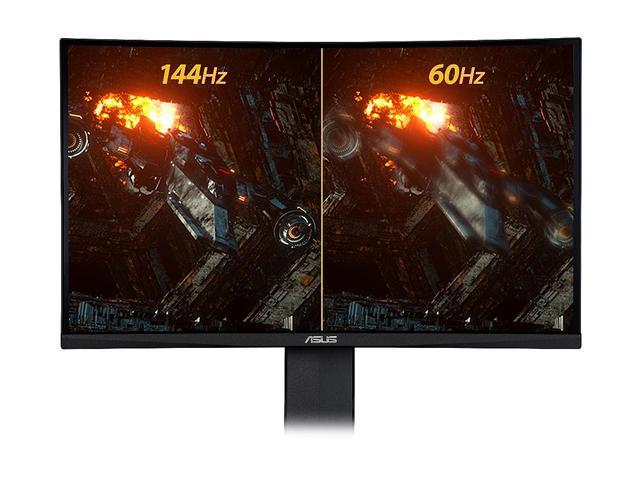 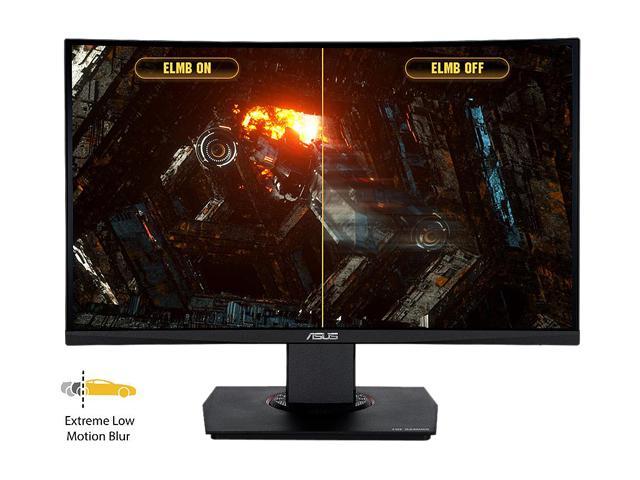 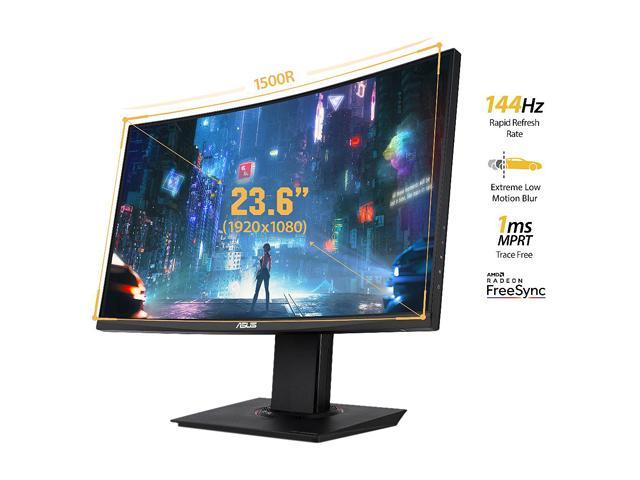 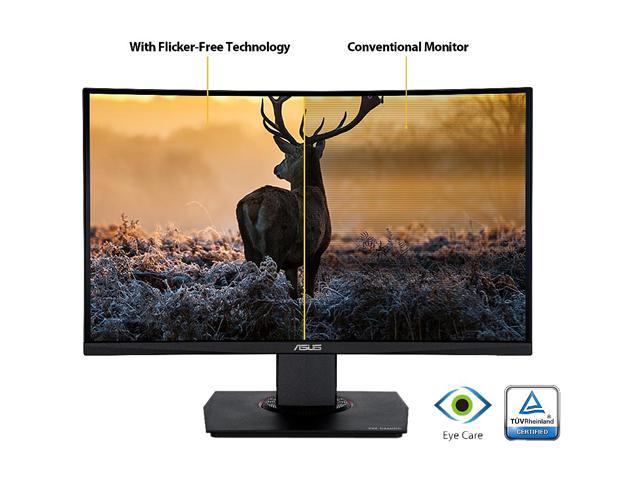 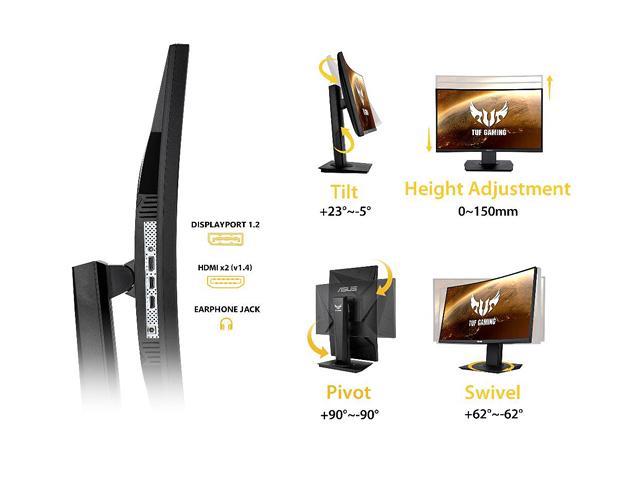 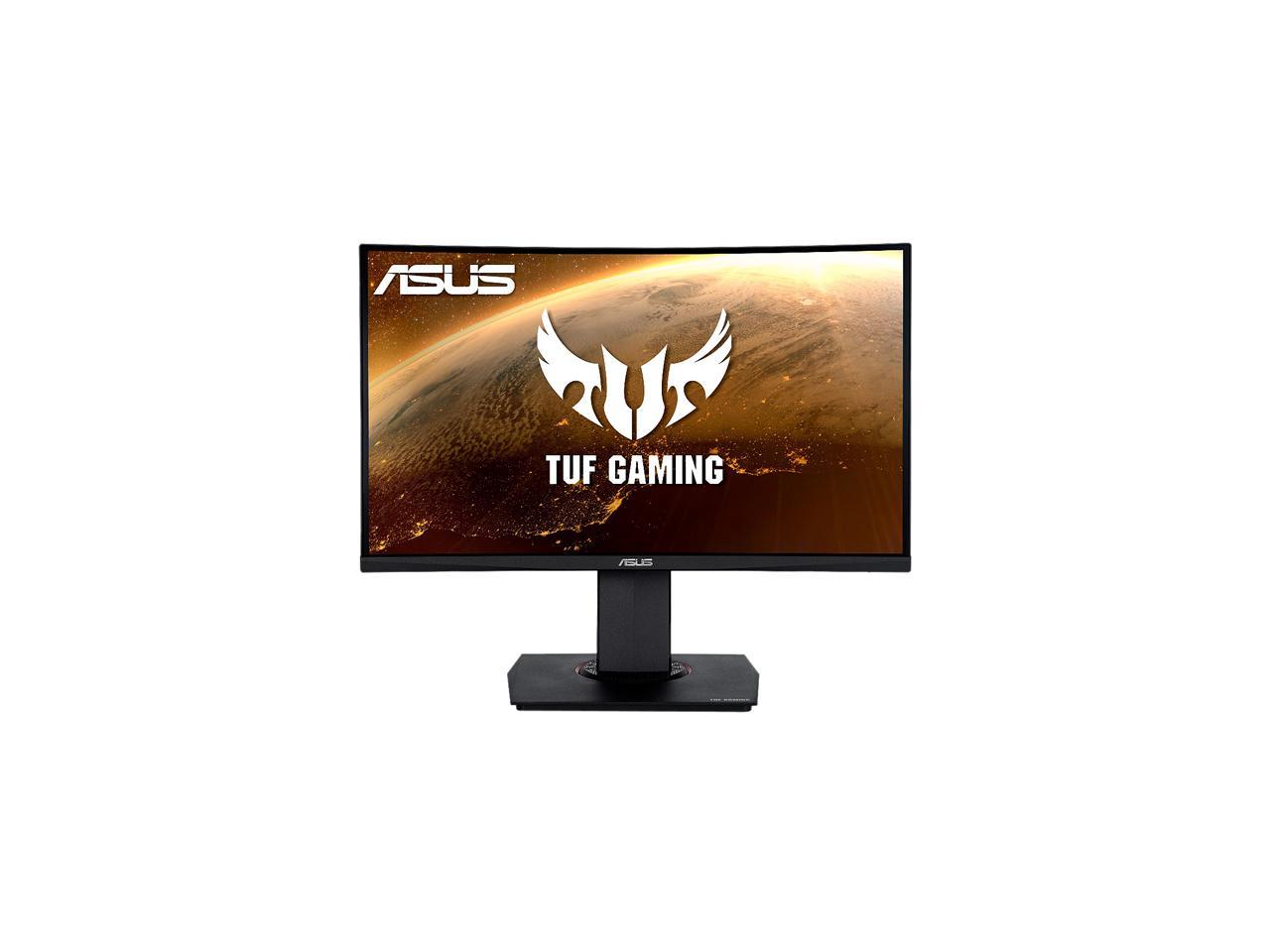 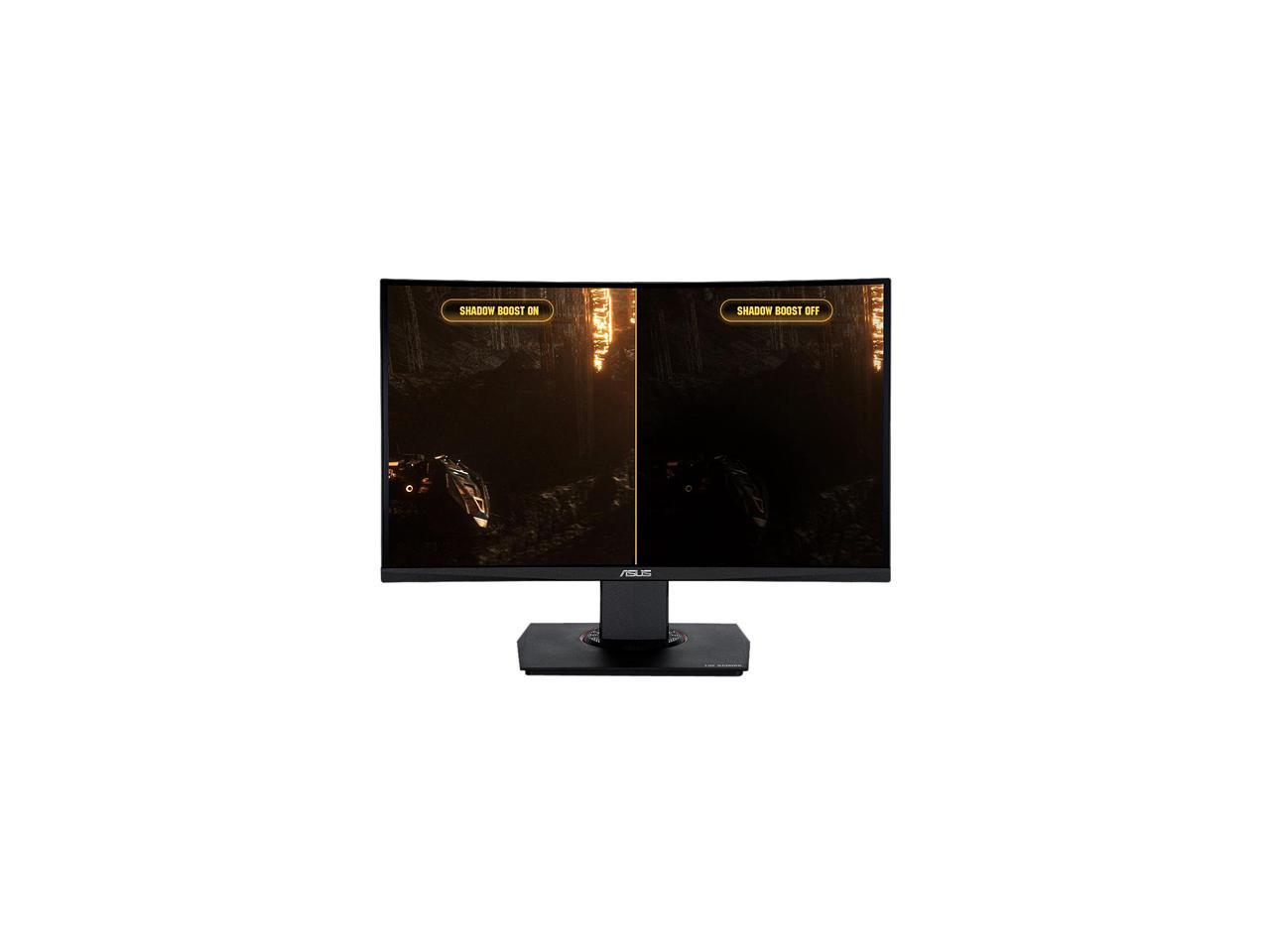 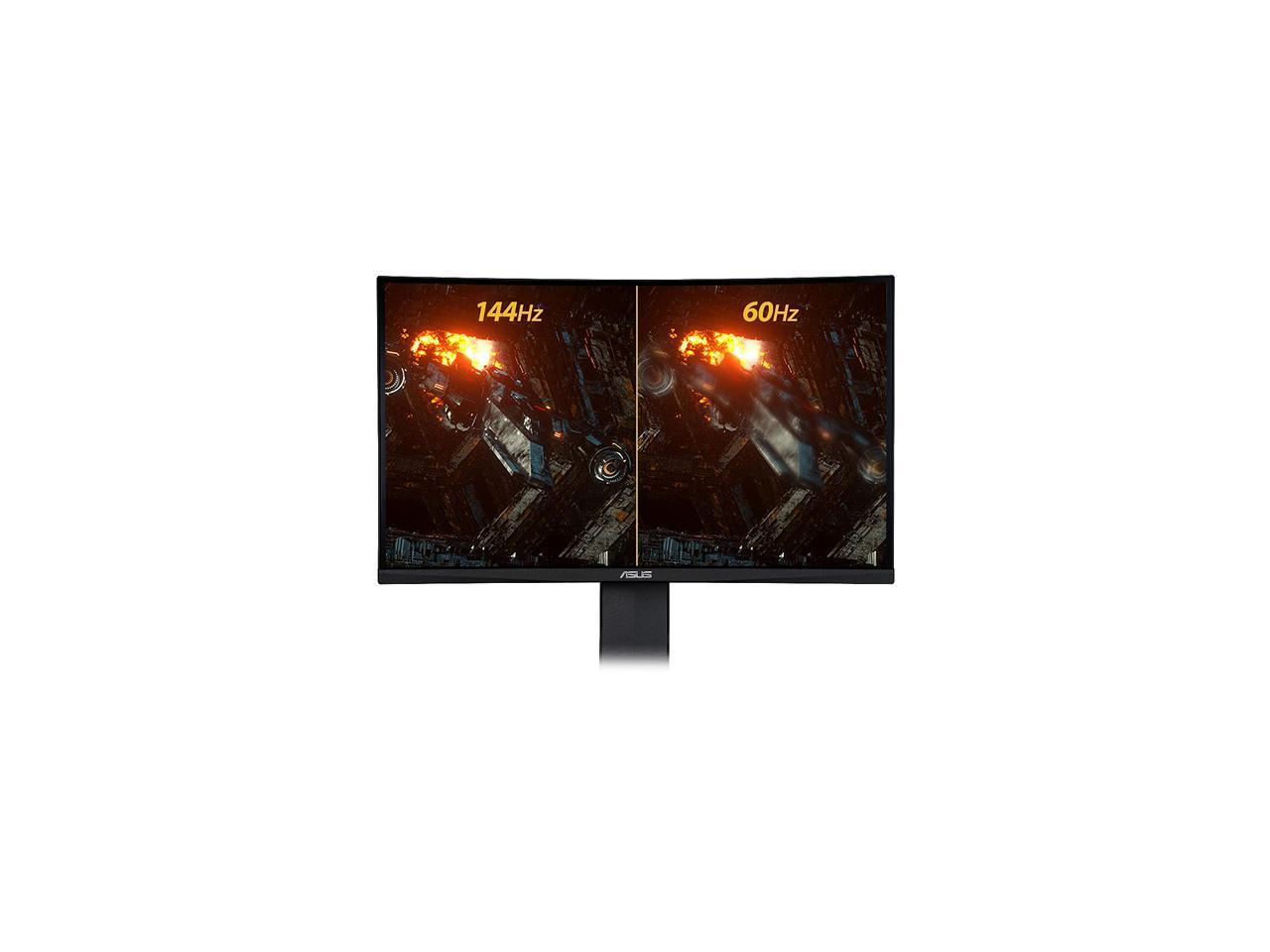 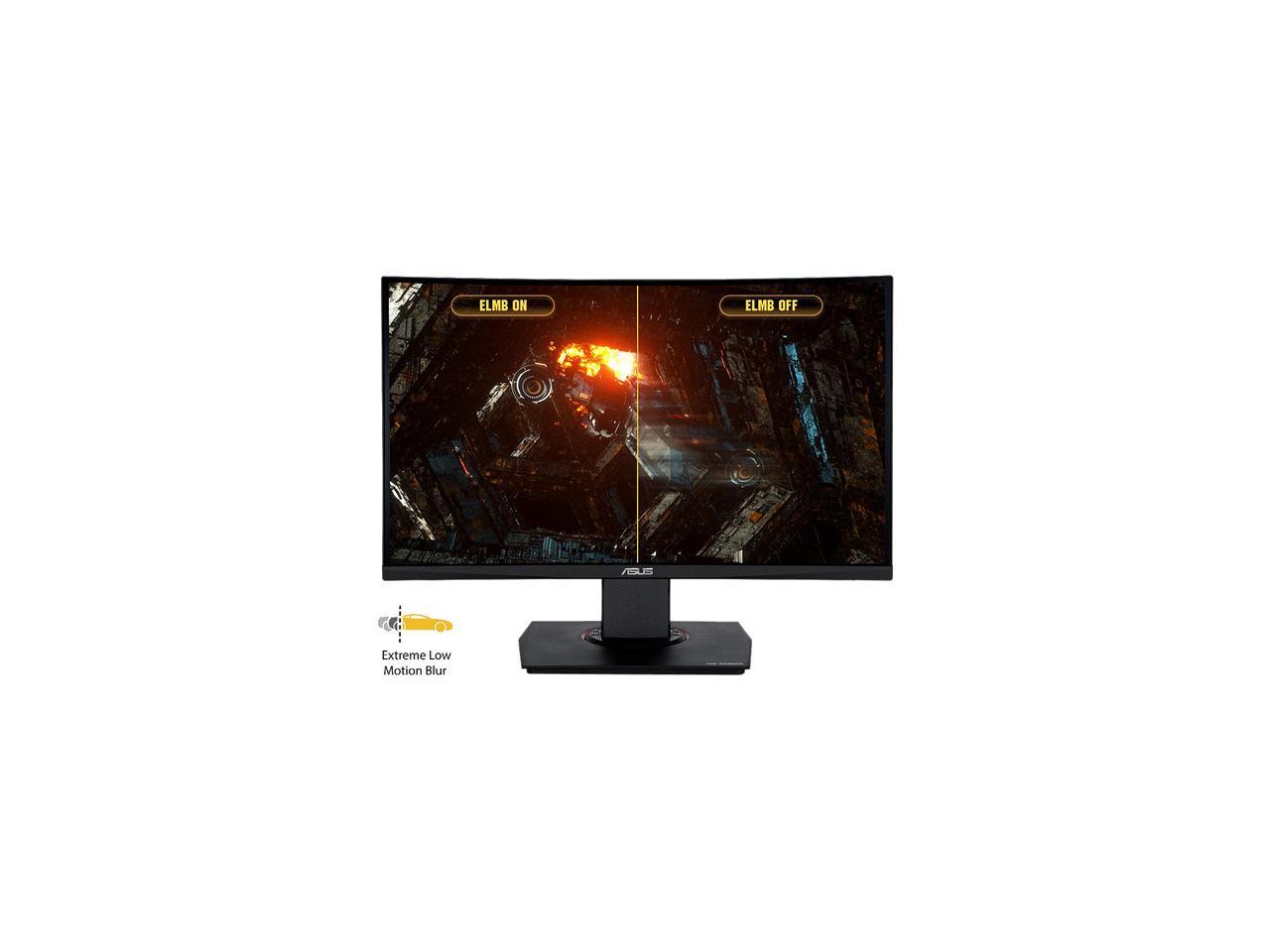 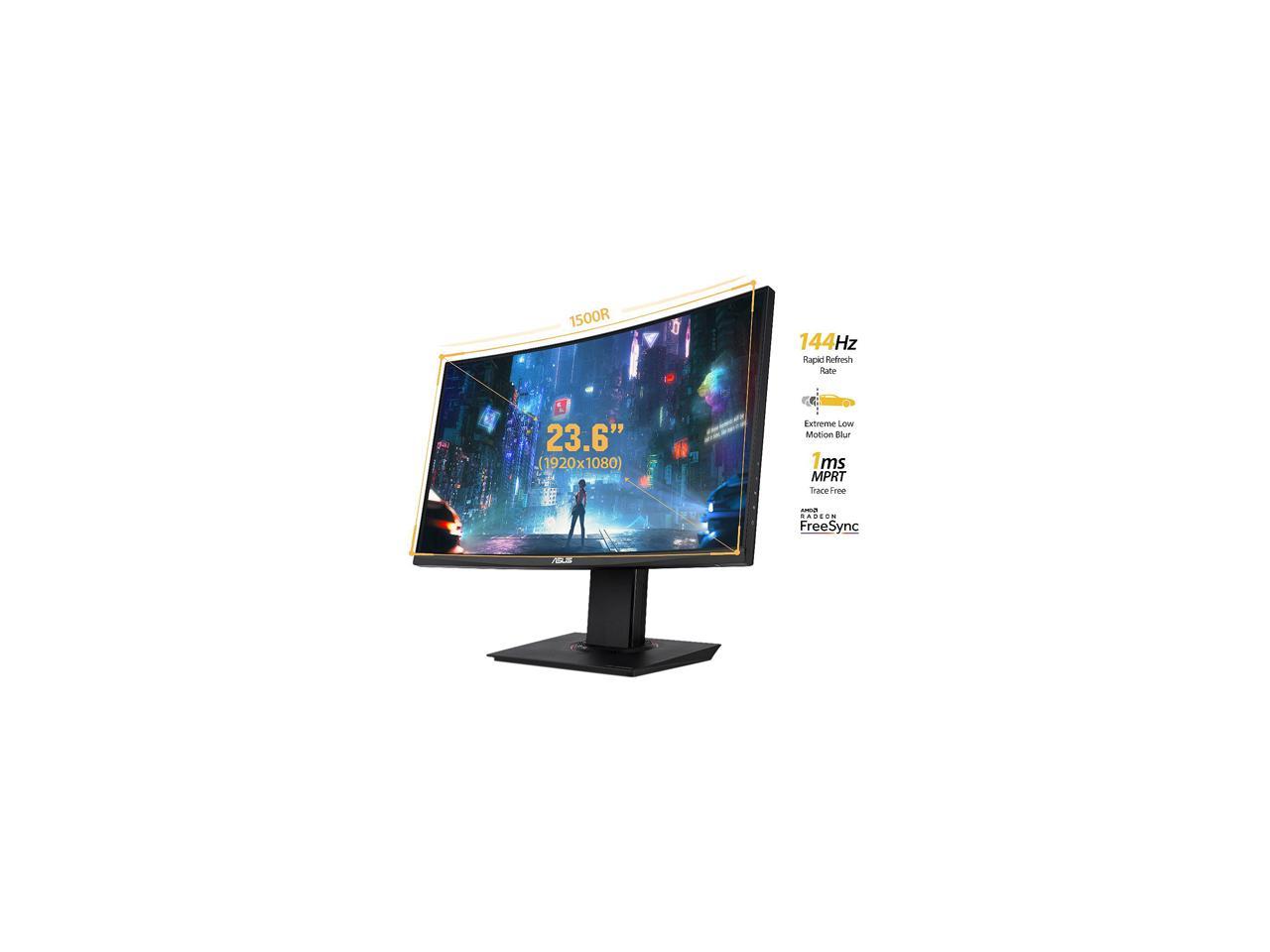 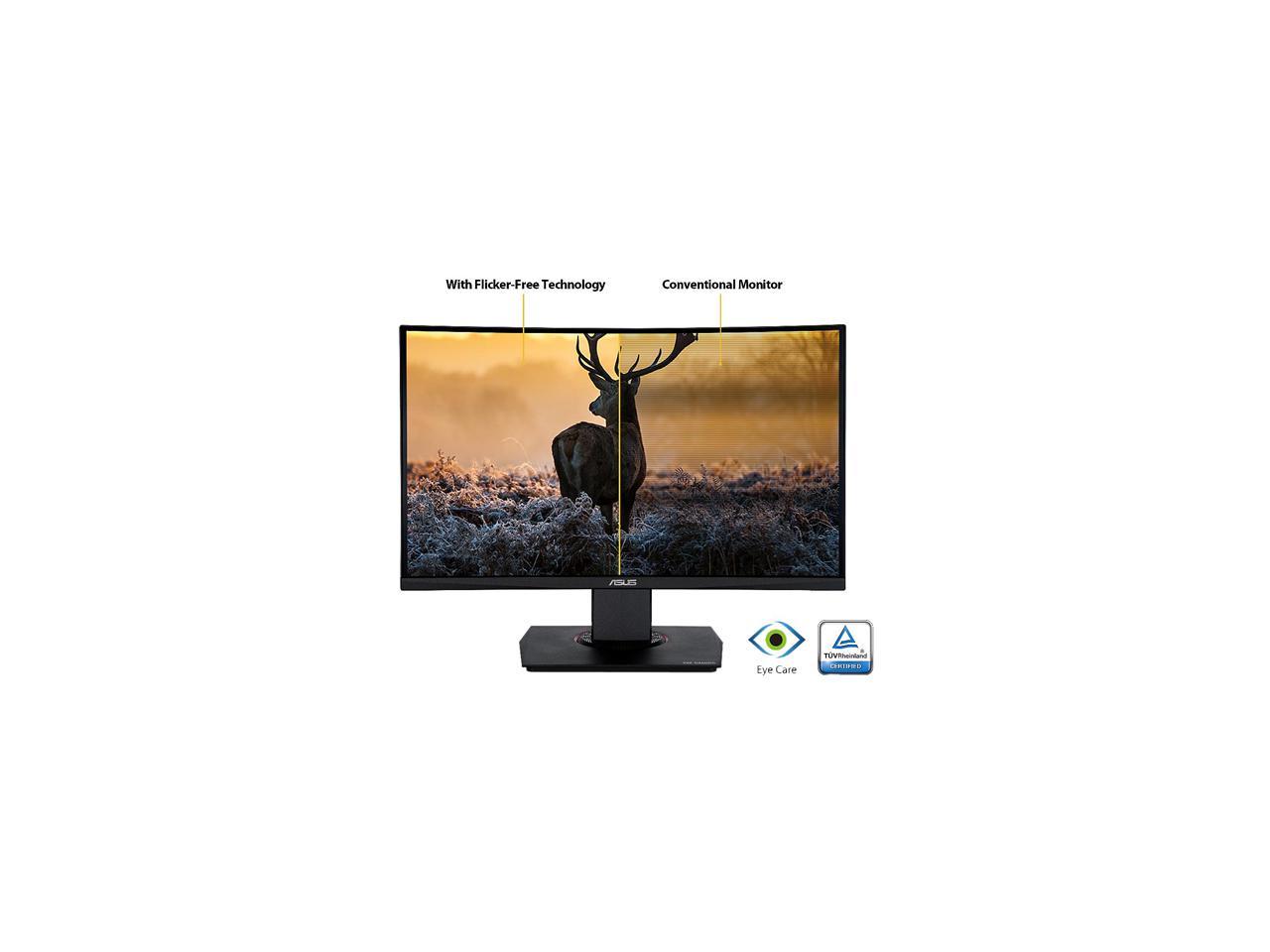 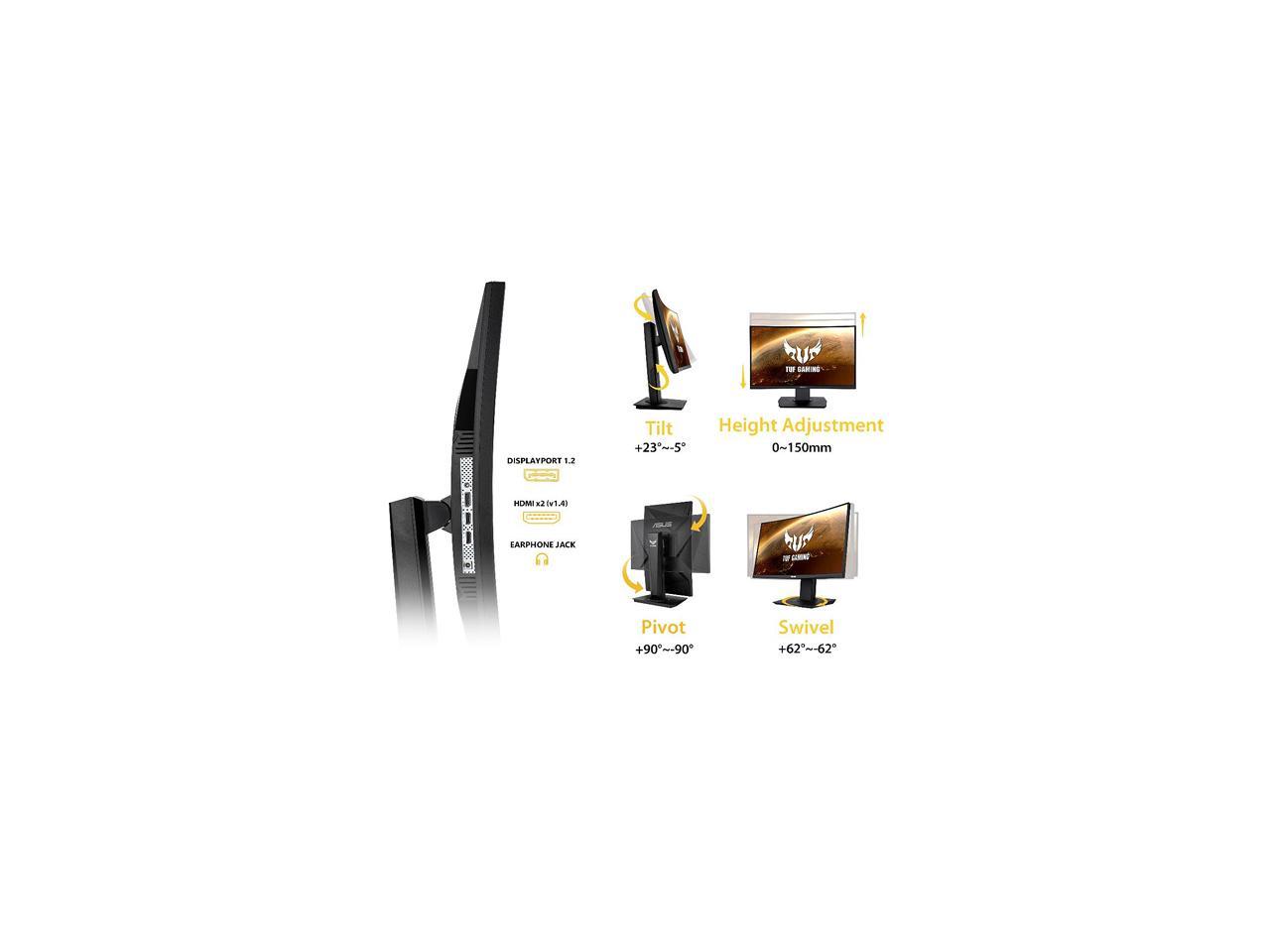 Learn more about the ASUS VG24VQ

Cons: *stock ICC color profile is bad for eyes (brightness & contrast) and looks washed out of saturation NOTE: there is custom ICC profile available for this monitor and NVIDIA orAMD cards on PCmonitor.info - get that, it's much better than stock one!

Overall Review: Knocking one egg off for bad stock color (ICC) profile. Install the driver to enable 144Hz in Windows, then go to PCmonitor.info (google it with keyword VG248QE) and download the specific AMD or NVIDIA color profile for this monitor which you can load to win7 or win8 and lastly set the monitor (firmware menu) to: Standard profile Brightness 25-35 Contrast 70 Red 100 Green 90 Blue 89 Alternatively (or additionally) google Zero Motion Blur and use the LightBoost feature in 2D mode to literally eliminate motion blur (like on CRT). In Summary this is the best gaming screen I have ever had, looks amazingly well after color profile correction!

51 out of 51 people found this review helpful. Did you?
Manufacturer Response:
Dear feniks, Thank you for selecting the VG248QE model. You can also try the ICC profiles on this site: http://www.tftcentral.co.uk/articles/icc_profiles.htm and either download the icc profile or manually calibrate your monitor with suggested settings. So far, there are two profiles for the VG Series. They may not be for this specific model, but they should be compatible since they’re in the same category. Should you require further assistance with this topic, please email me at cl-celeste@asus.com and include ref#1072-10049 in the subject line. Sincerely, Celeste ASUS Customer Loyalty
Lyndell F.
Ownership: 1 month to 1 year

Pros: This thing is amazing. Every game I've tested thus far looks stunningly smooth, and fluid, thanks to the almost non-existent response time, and high refresh rate. I wasn't expecting a huge difference over standard 60hz monitors, and I've never been so happy to be wrong. It really is something you must see to believe. The 3D is very nice, also.

Cons: - As stated in most other reviews, the color is lacking. Even after some tweaking, it is still subpar. In my case, however, it is a worthy tradeoff. - Price. While it is cheaper than others in it's class, the price is on par with many high-end color-accurate displays, and at least in my case, this made my decision that much tougher. - Unless I'm missing a setting somewhere, text looks pretty bad.

10 out of 14 people found this review helpful. Did you?
Matthew S.
Ownership: less than 1 day

Pros: This monitor is a very good size. The base is solid and fully adjustable. 144Hz! 1ms! Great price point.

Cons: DVI Wire is too short. Thanks to PC Monitors and their info ;) I was able to get colors that have been rich and vibrant. But it comes with a price. web browsing on white windows is starting to give me a headache. It is WAY too bright! I turn down the brightness and the colors get washed out.

Overall Review: I removed a star because I believe a monitor should be ready to go out of the box. Or at least have settings that allow you to get there. If you buy this monitor prepare yourself to work.

Pros: If you on the edge of buying this monitor because you're not sure you'll see a difference between 60hz and 144hz, let me tell you there's a difference. Not a small one either. It's nice seeing your mouse move buttery smooth over the desktop, but once you take this monitor into a game, woo-wee does it shine! It's difficult to explain the experience, but it's amazing

Cons: Colors are a bit washed out, but once you get this monitor I recommend you check out this post on PCMR to make the monitor look great! http://www.reddit.com/r/pcmasterrace/comments/1wxse9/just_bought_a_glorious_asus_vg248qe_gaming/

Overall Review: Make sure to use a connection that supports 144hz. I would use the Dual Link DVI cable that comes in the box.

Pros: 144hz makes a world of difference I noticed right away, no longer does games seem to have that "motion blur" when I turn around compared to my 60hz monitor. Color is great once you set up the monitor right (see other thoughts)

Cons: Colors out of box is rather bland and super bright white. It's rather pricey I suppose I wish I had paid the extra for the 27 inch version of this as my old 60hz monitor was 27 inch...this thing seems small.

Overall Review: To get color great, go to ASUS website and download the drivers and color profile. Google "how to use an ICC profile" . Use the STANDARD setting and set the user color of RED = 96, GREEN = 94, and BLUE = 88. Turn brightness down to 35 and run Windows color calibration to just set the gamma right (use clear type too).

Pros: First off, Ive had this monitor for about 3 weeks now and I have to say, I can never, ever go back to having a standard 60hz monitor. I had initially hesitated because of reading some negative comments about colour/picture quality, but honestly, the default settings were great. - Installed an excellent ICC Profile* for the monitor which makes it absolutely incredible (For people who complain about pic quality or potentially washed out colours -144hz (or even 120hz) is absolutely a huge game changer in the world of gaming and even just regular computer usage. It makes transitioning pictures/video seem so much more fluid and there isn't any noticeable motion blur (this is especially the case in FPS games) - Sleek design - Bezel is not too thick - Supports DVI, HDMI, Displayport - Stand is firm and the monitor does not wobble

Cons: Some cons include: - Default brightness of the monitor is incredibly bright, but playing with settings and installing an ICC Profile can fix that easily - Connecting cables can be a hassle as the ports are vertically placed on the mointor and not horizontal - Only a 24" monitor (I personally would have loved a somewhat larger size, but this is only preference)

Overall Review: * To configure an excellent set-up for the monitor use these settings: Splendid Mode: Standard Contrast: 80 Brightness: 35 Color Temp: User *RGB: Red 96 / Green 94 / Blue 88 -> Then proceed to the TFTCentral website and download the specific ICC profile for the monitor (Unfortunately cannot use include links in comments) All in all, an excellent monitor and I HIGHLY recommend it to anyone who's been eyeing the monitor for purchase

Pros: 144hz is amazing for shooters which I'm sure is a large majority of the people that purchased this. Adjustability in the stand is great. Once tweaked, the picture is pretty good. See my settings in other thoughts for nvidia owners.

Cons: Picture out the box is AWFUL. Once tweaked still not perfect but ok. Contrast, gamma, and colors are not perfect. Makes me want to constantly upgrade video cards to run games above high settings at 144 fps. A 780 cannot max modern games at 144hz defeating the purpose of having 144hz :( .

Overall Review: If you have an nvidia card I suggest checking these settings out as I have played with them a lot and found this to be very good. I play in a medium-dim room (don't let the initial settings scare you before you adjust the nvidia setting): Monitor Settings- Brightness: 40 Contrast: 50 Saturation: 53 Color temp: User Red: 100 Green: 97 Blue: 99 Skin tone: Reddish Nvidia Control Panel Settings>Display>Adjust desktop color>check "use nvidia settings"- Brightness: 47 Contrast: 50 Gamma: .89 Digital Vibrance: 58% Apply... This will give you a slightly oversaturated color that is good for games and have a good contrast/not washed out. If it is too dark for you in shadow/dark area of a map (I have not found it to be), you can use either the in game brightness control or bump the brightness up a notch or 2 in nvidia or monitor settings or change gamma in nvidia settings to .91. Hope you enjoy these settings as much as I do!

Pros: They're wrong, way wrong. If you swap out your old monitor with this one, it will stay at 60Hz until you change it yourself. And when you do, you WILL notice the difference and that "wow" factor will exponentially increase when you load a game on the screen. Even before loading a game, just doing normal things in Windows 8.1 will amaze you in how fluid everything moves. Of course, I must let you know that I'm running a Superclocked GTX 780 with a I5 4670K @ 4.0GHZ with 8GB DDR3 ram so I can easily run all my games far beyond 60FPS. The 144Hz feature was the main reason I bought this monitor, and I don't regret it. Games I ran just in the time that I could test are : Team fortress 2, Titanfall, Far Cry 3, Battlefield 3, and Crysis 2. I've played these games for a long time but I was seeing them in a new, refreshing light when using this monitor. As far as colors go, I knew from other reviewers that the colors out of the box weren't the greatest, but googling "Asus vg248qe ICC profiles" fixed that up in a jiffy. Compared to my old monitor (It was a not-so-good Hannspree monitor) , the color is an improvement. I have not noticed any screen tearing on game that run over 144FPS, but I went ahead and forced all games to run Vsync, so no game goes higher than 144FPS. Even with vsync on, I have not noticed the input lag that typically comes with having vsync on which is great. I have not tried the 3D feature of this monitor, but I may very well try it out in the future.

Cons: For Cons, I have not had this monitor long, but thankfully I haven't noticed any glaring flaws yet. Very simple setup (literally took me less than a minute to put the monitor on its stand and swap out my old monitor).

Overall Review: If you cannot run games past 60FPS, don't buy this monitor unless you really need a monitor with low input lag. You won't really be taking advantage of the 144Hz if your computer is struggling to make 60FPS.