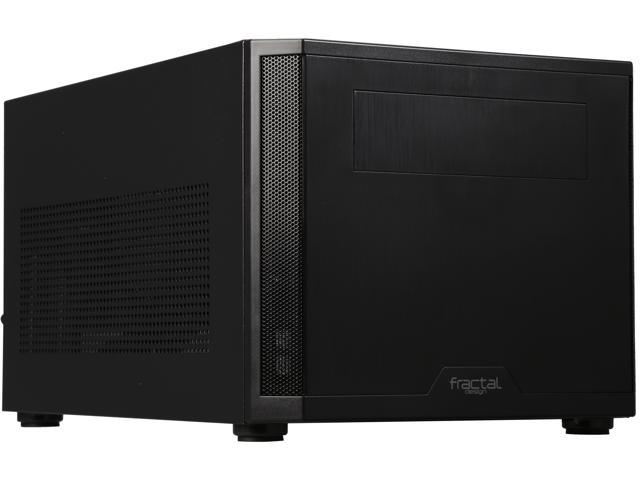 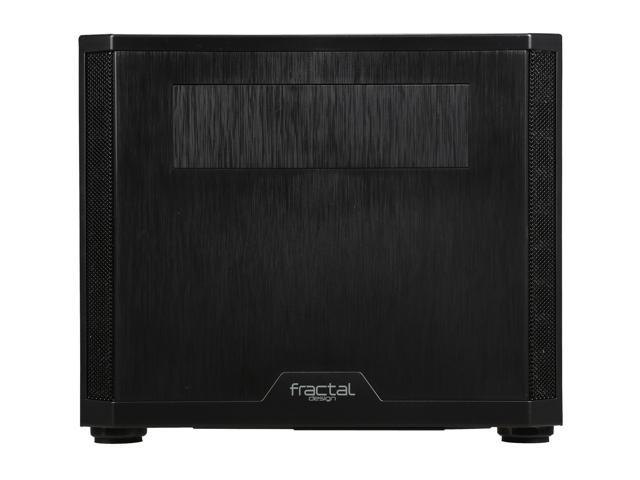 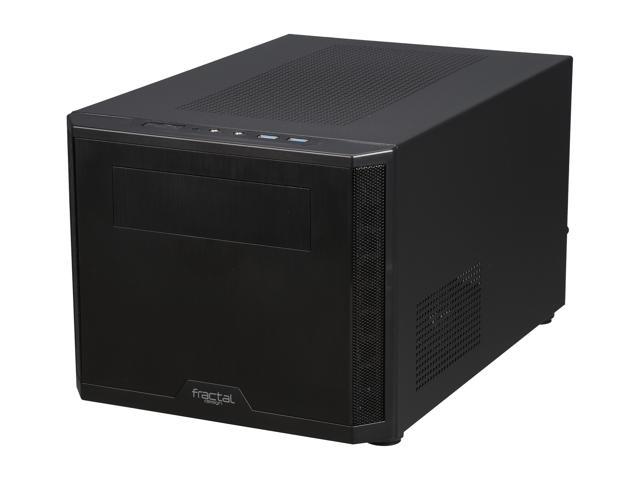 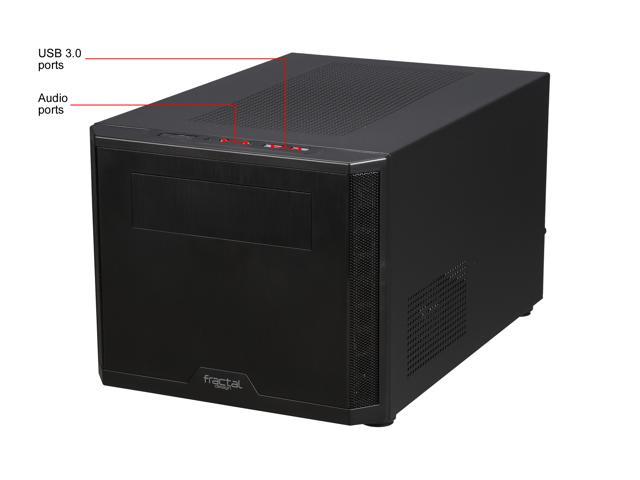 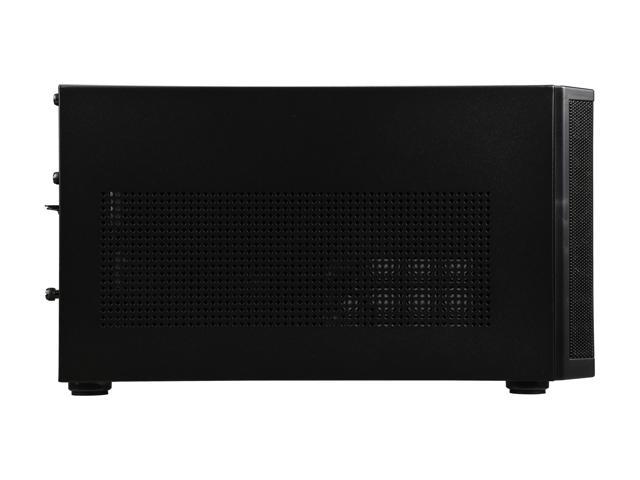 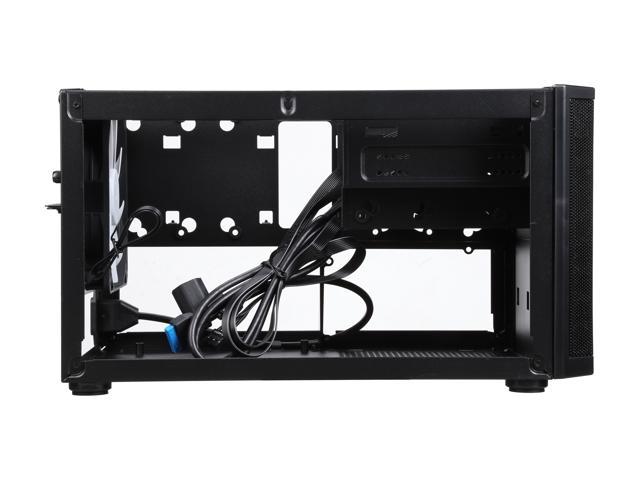 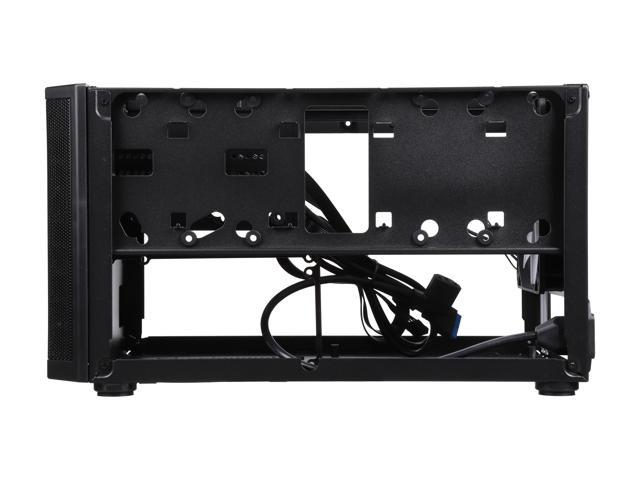 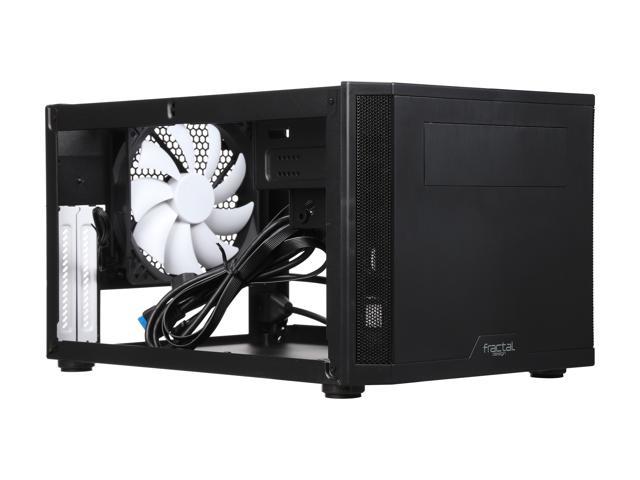 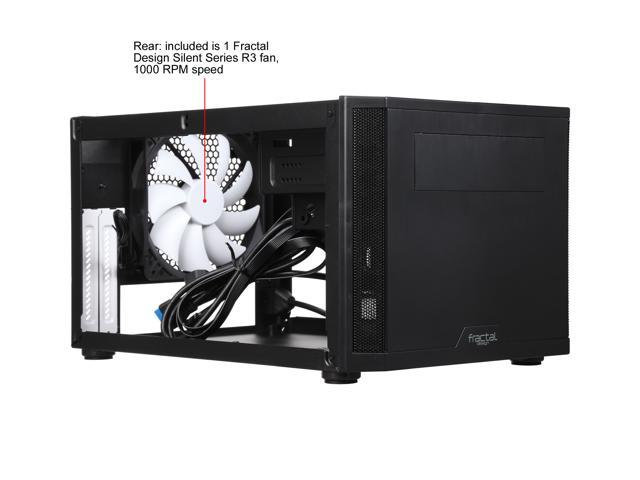 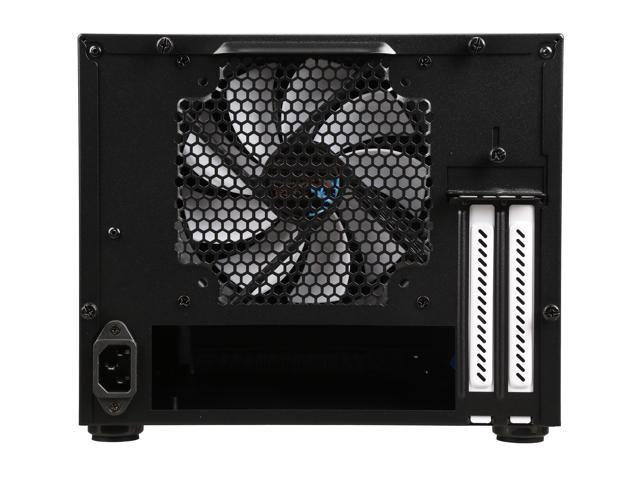 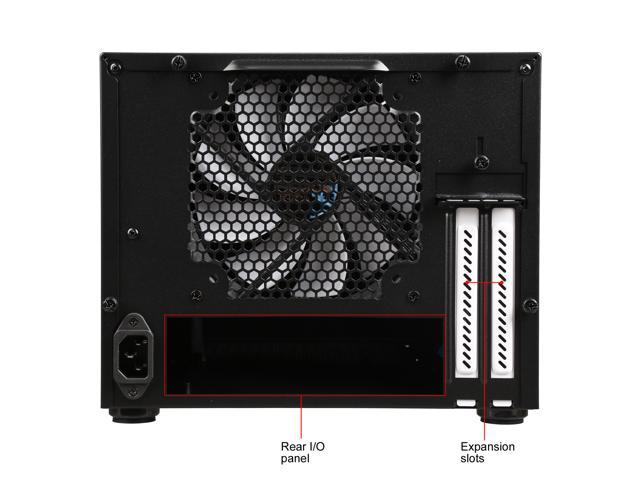 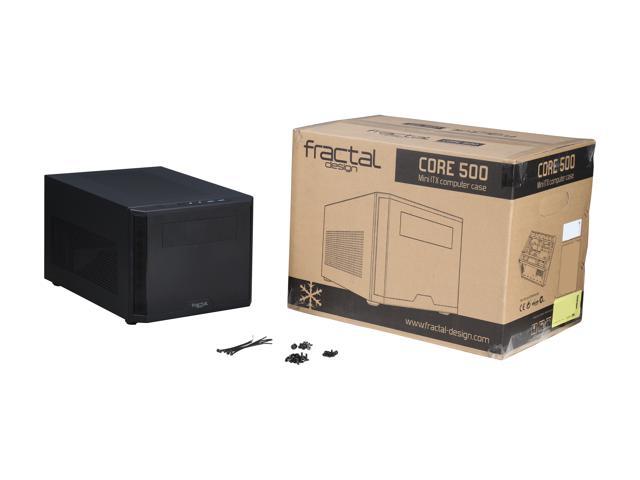 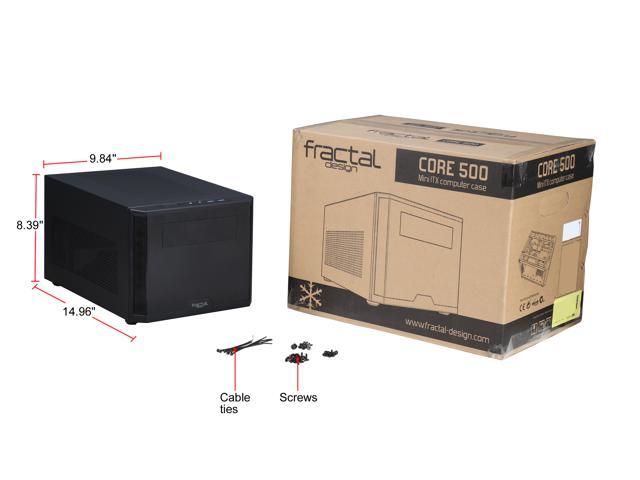 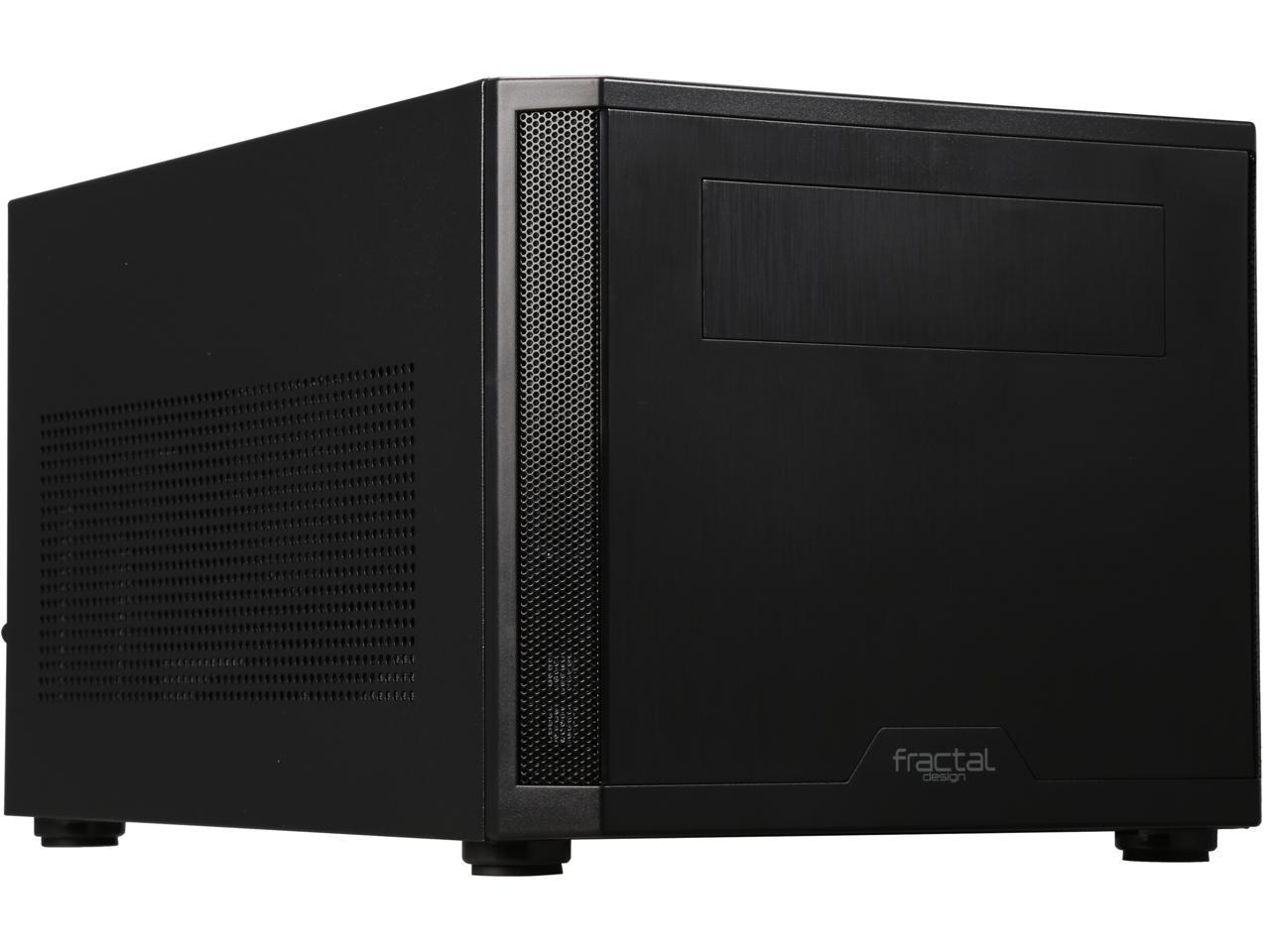 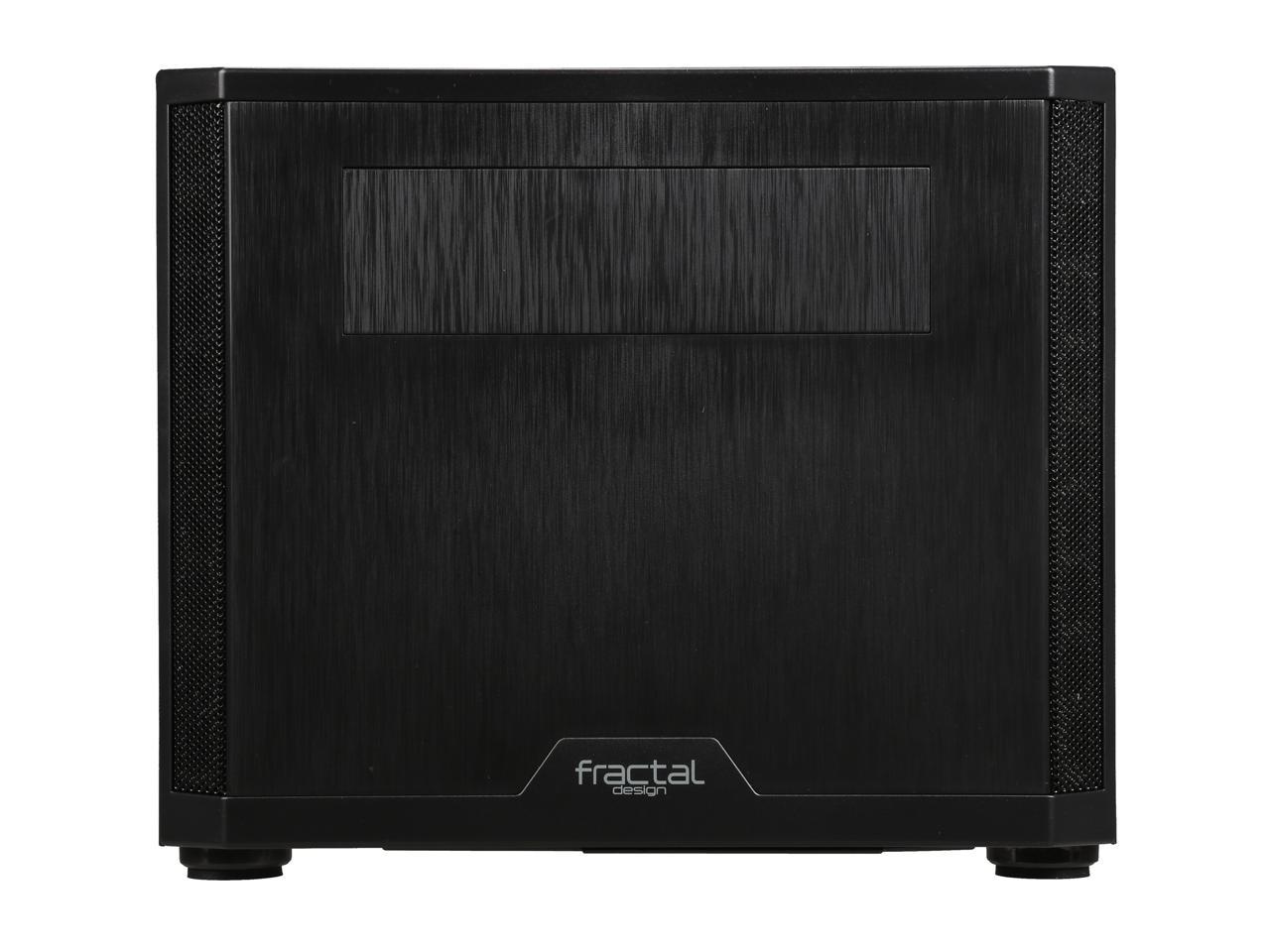 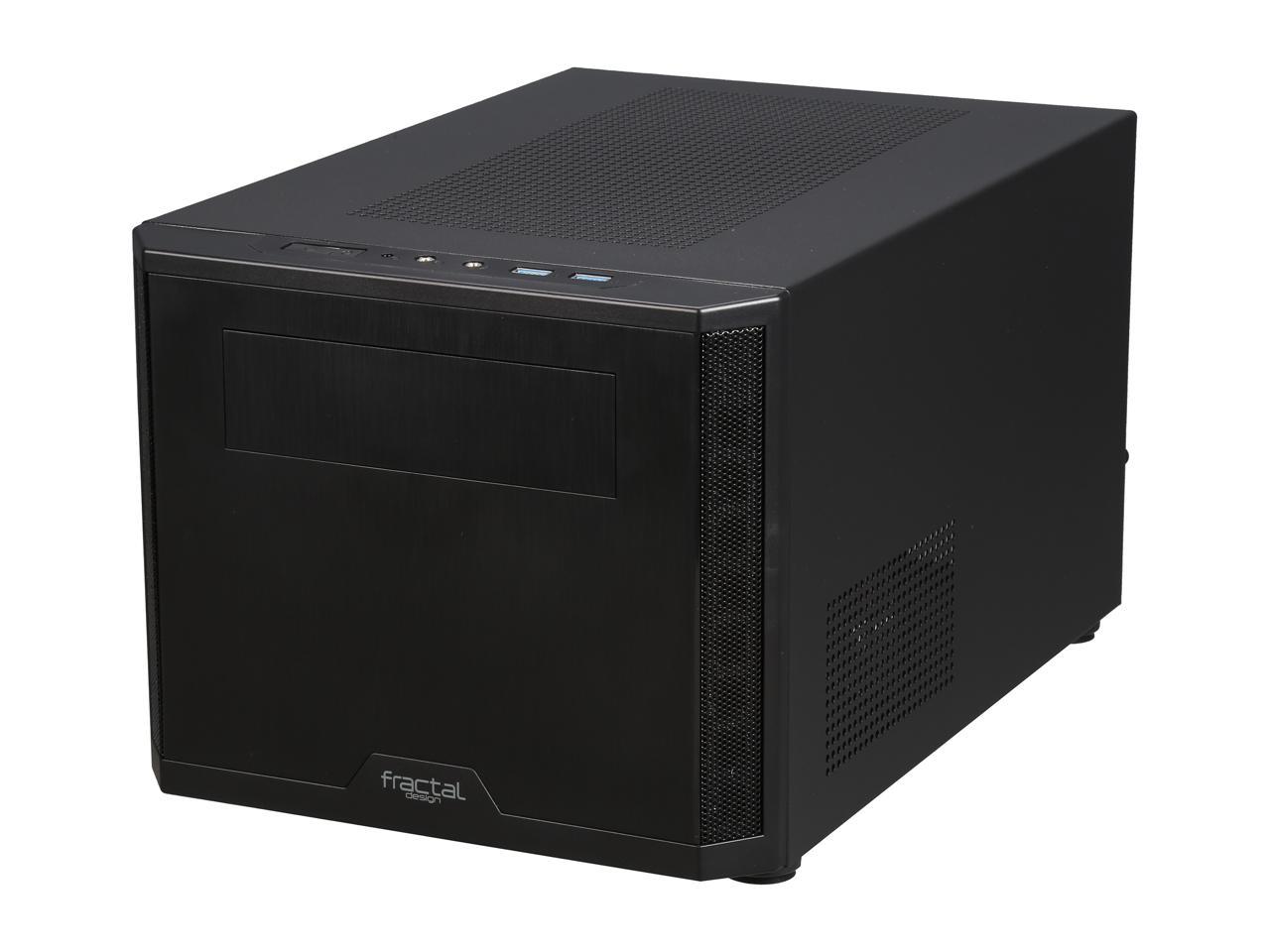 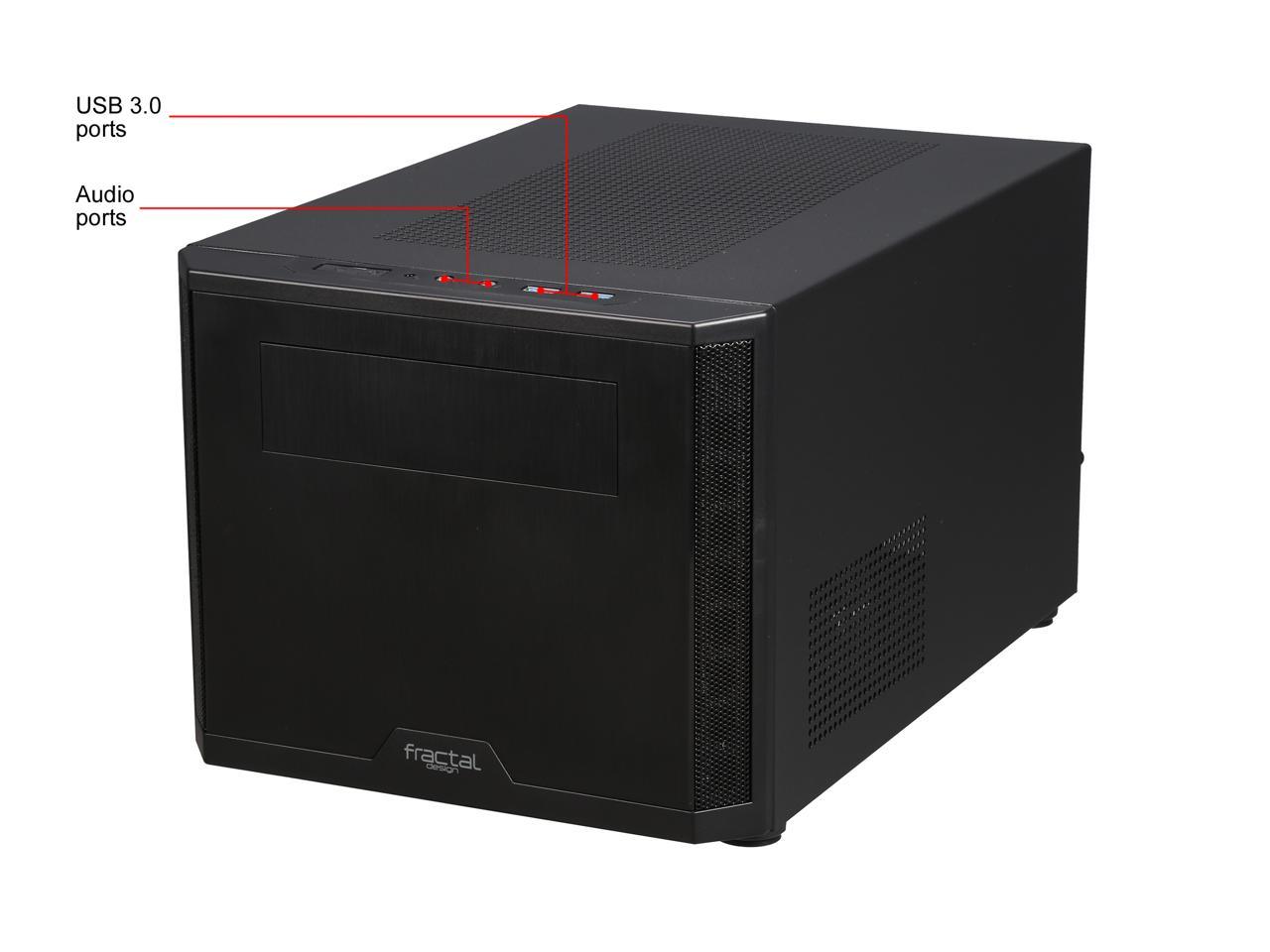 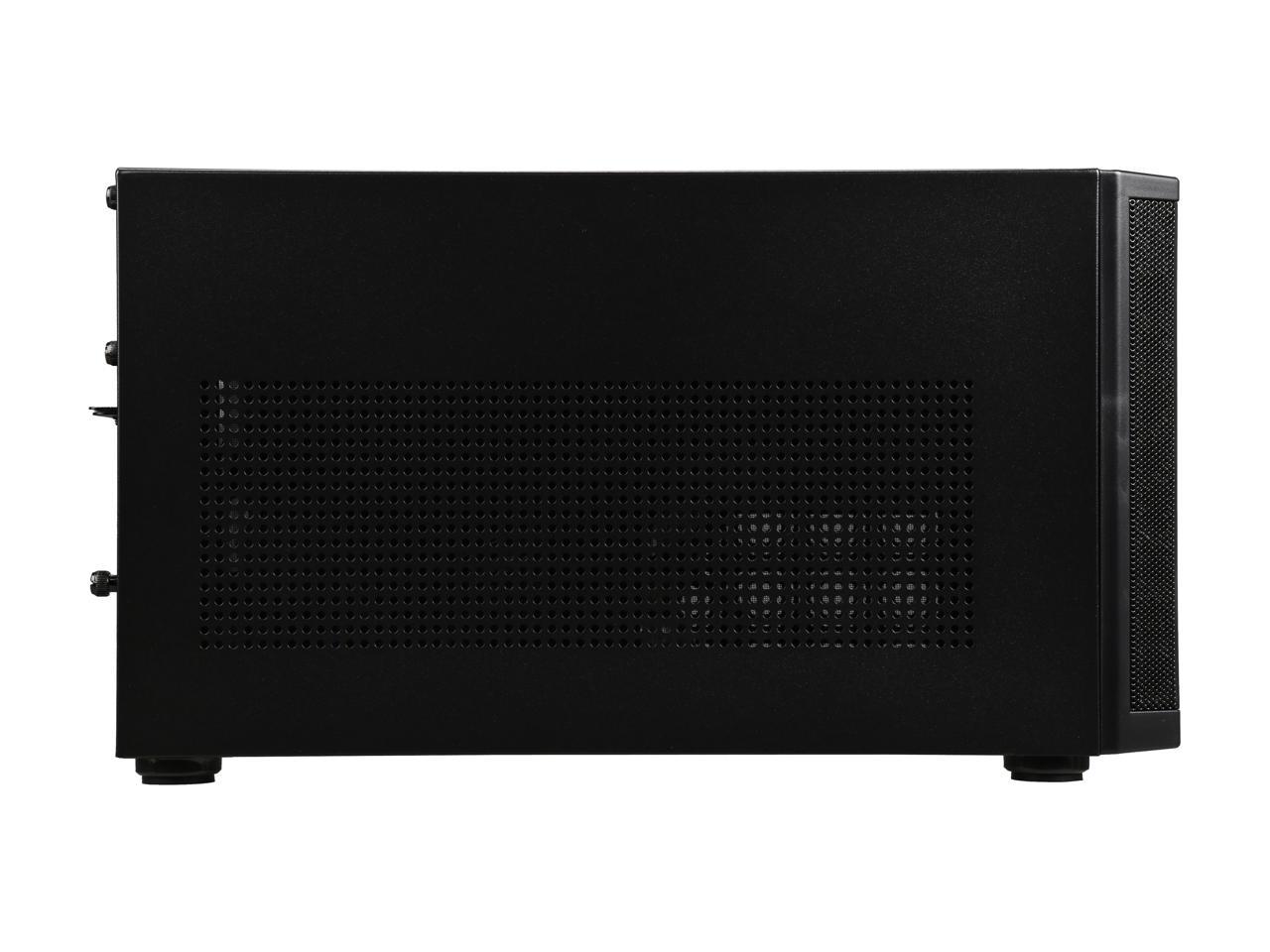 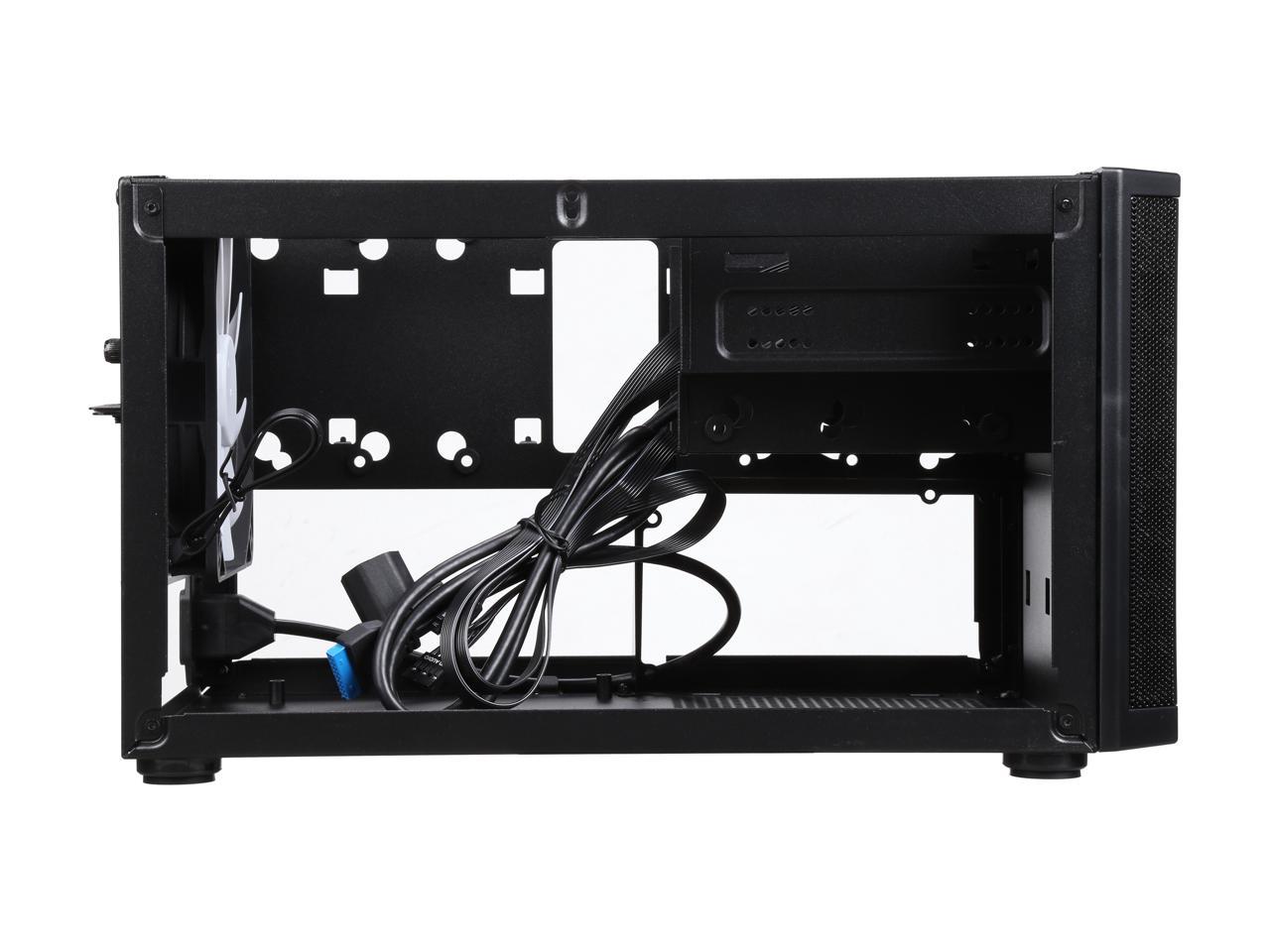 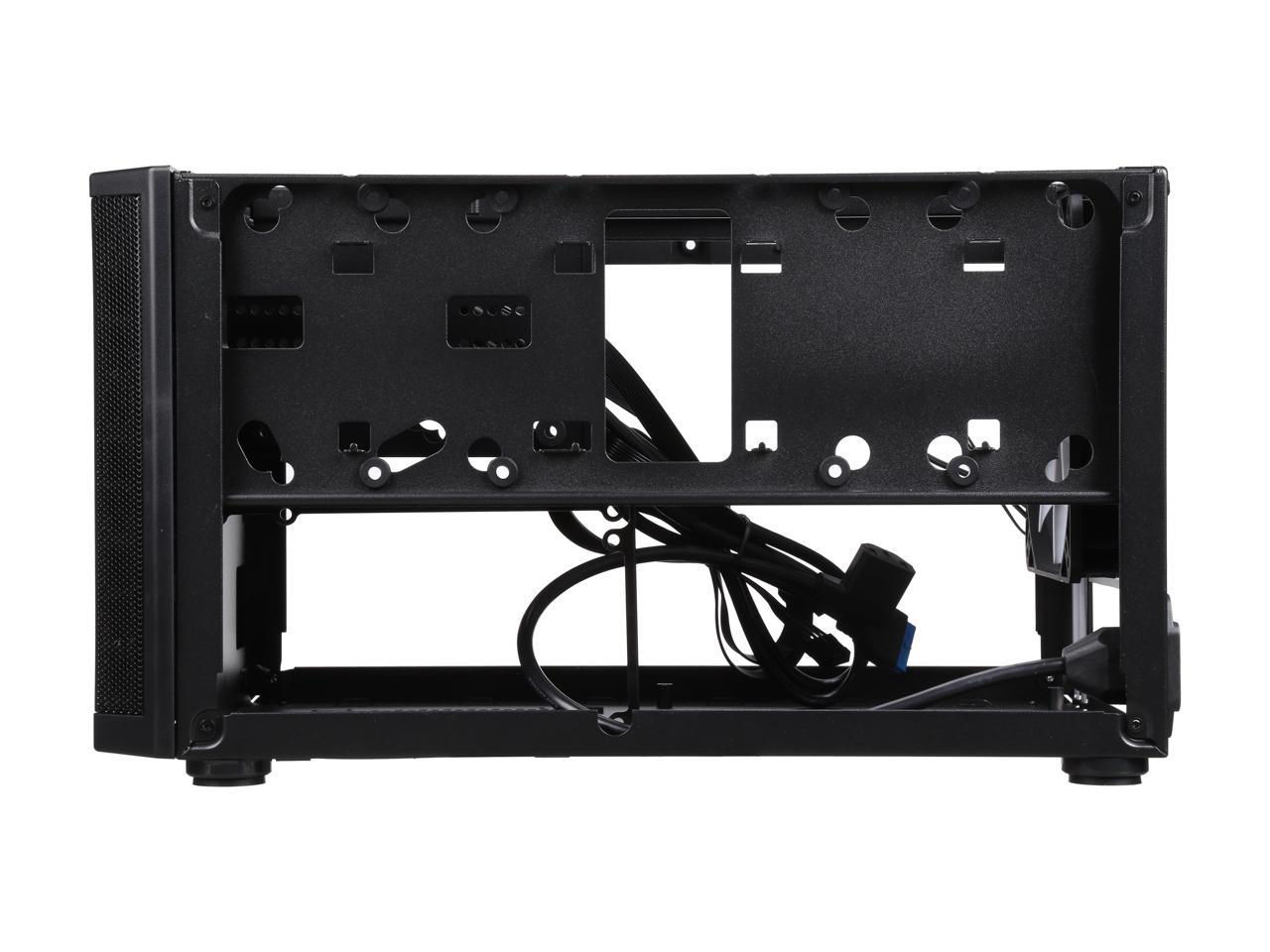 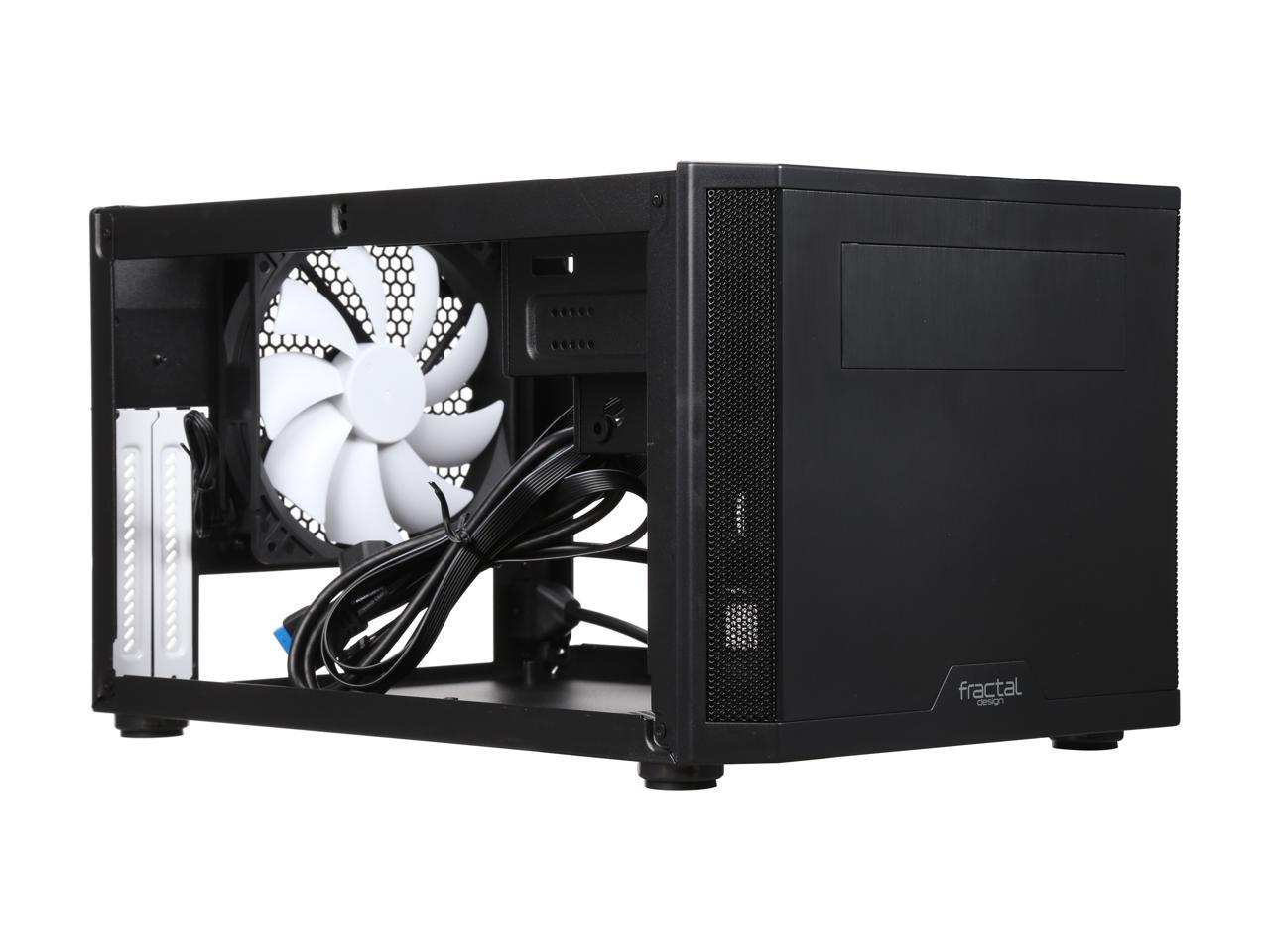 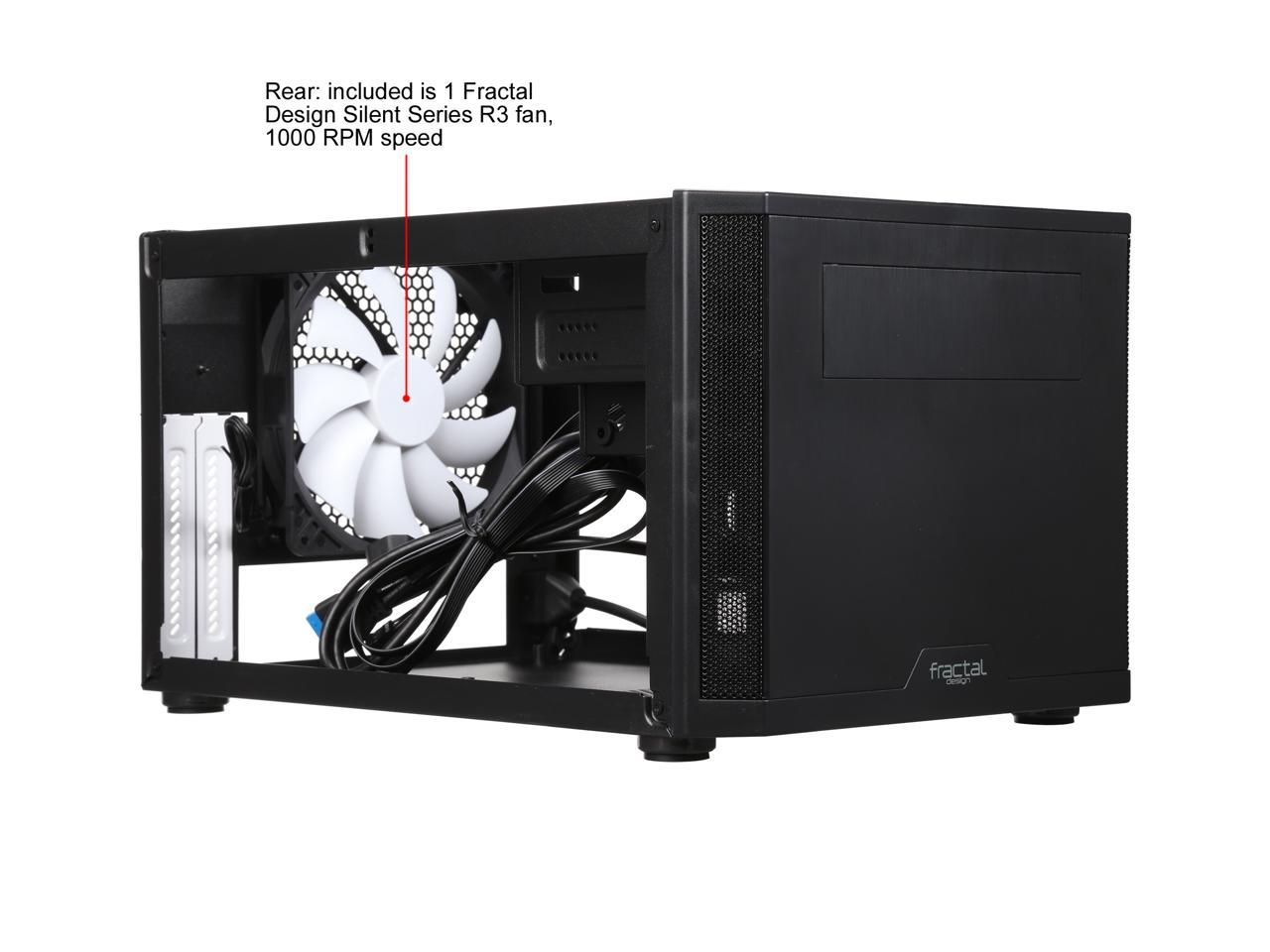 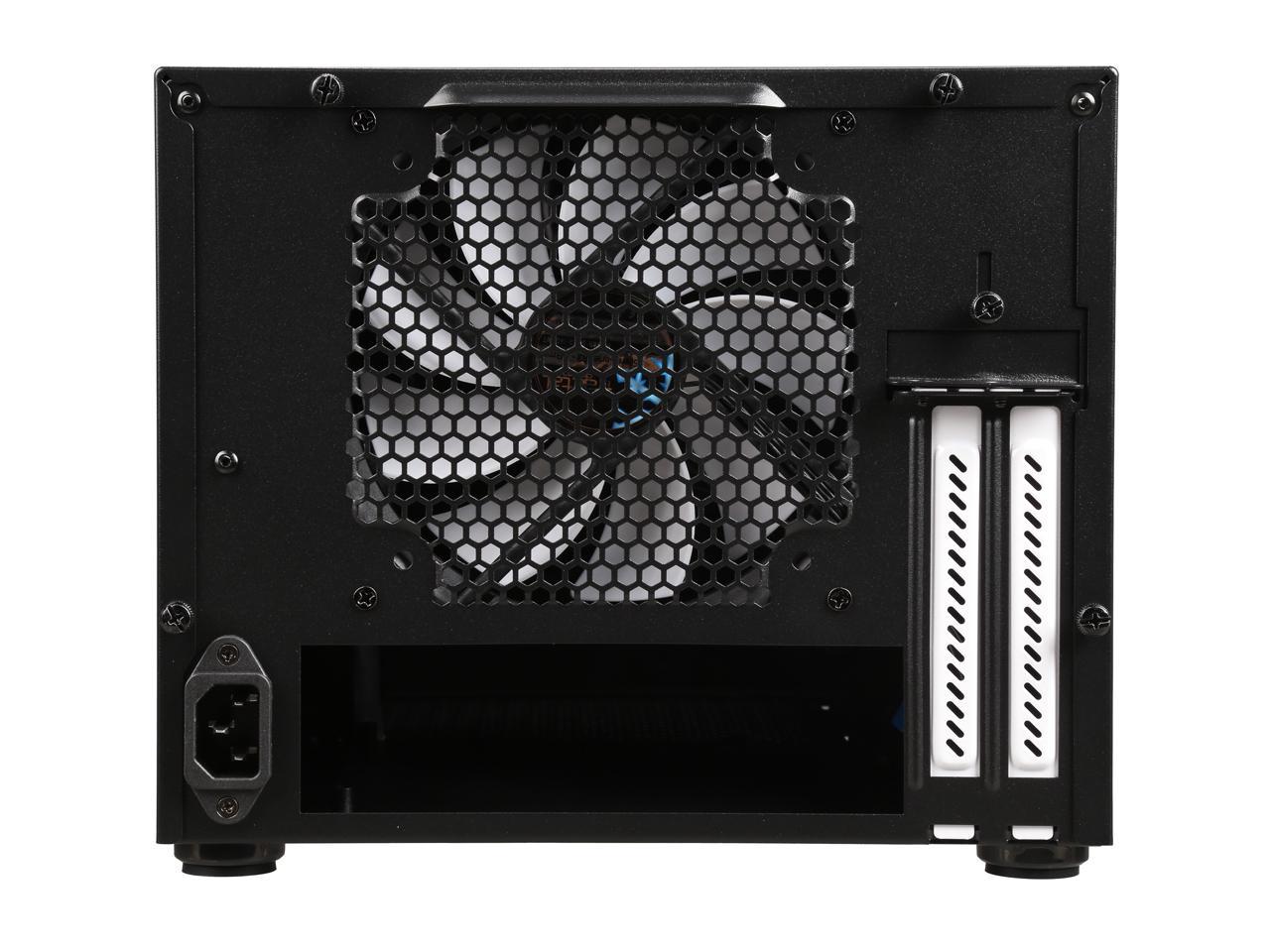 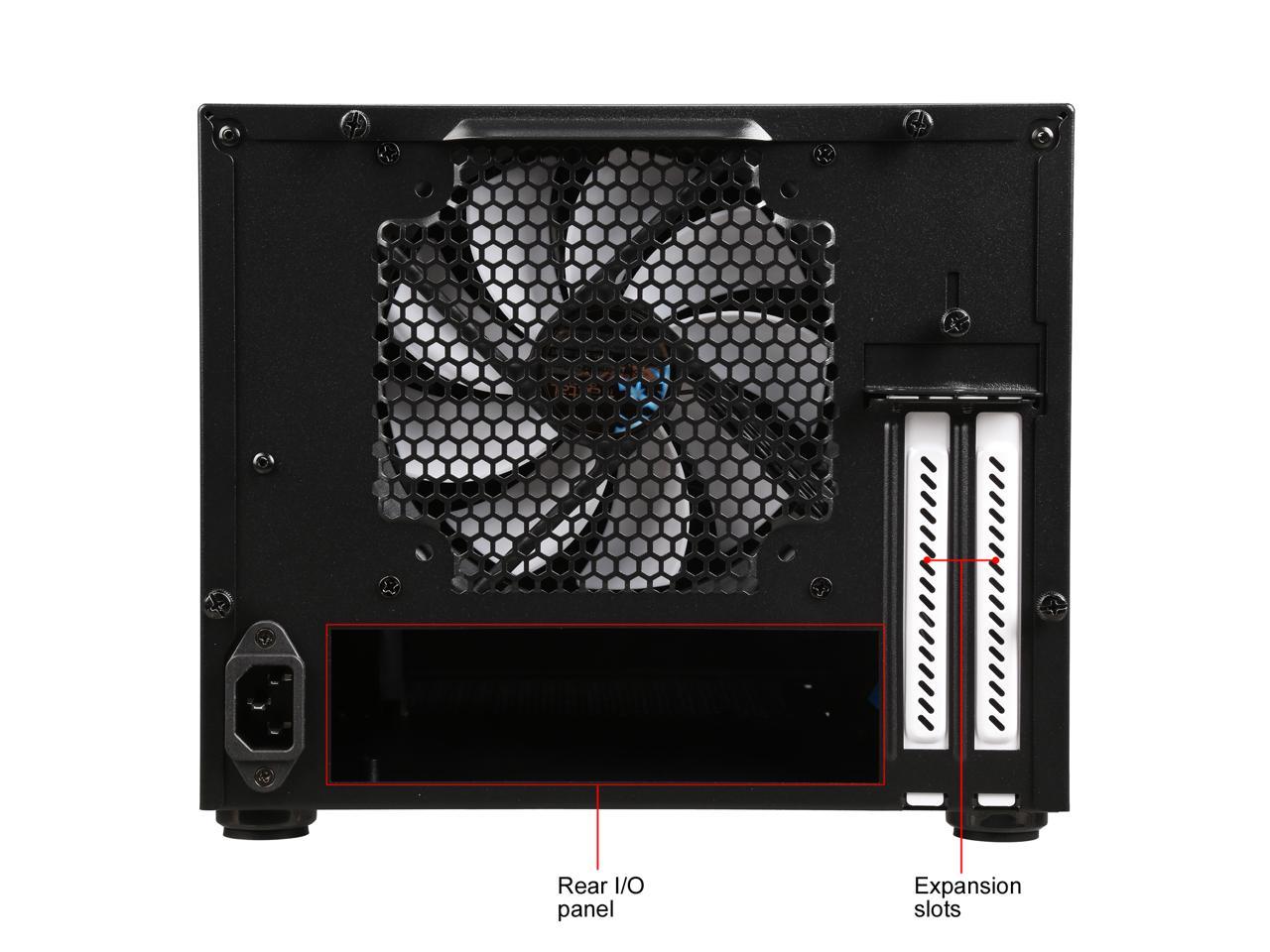 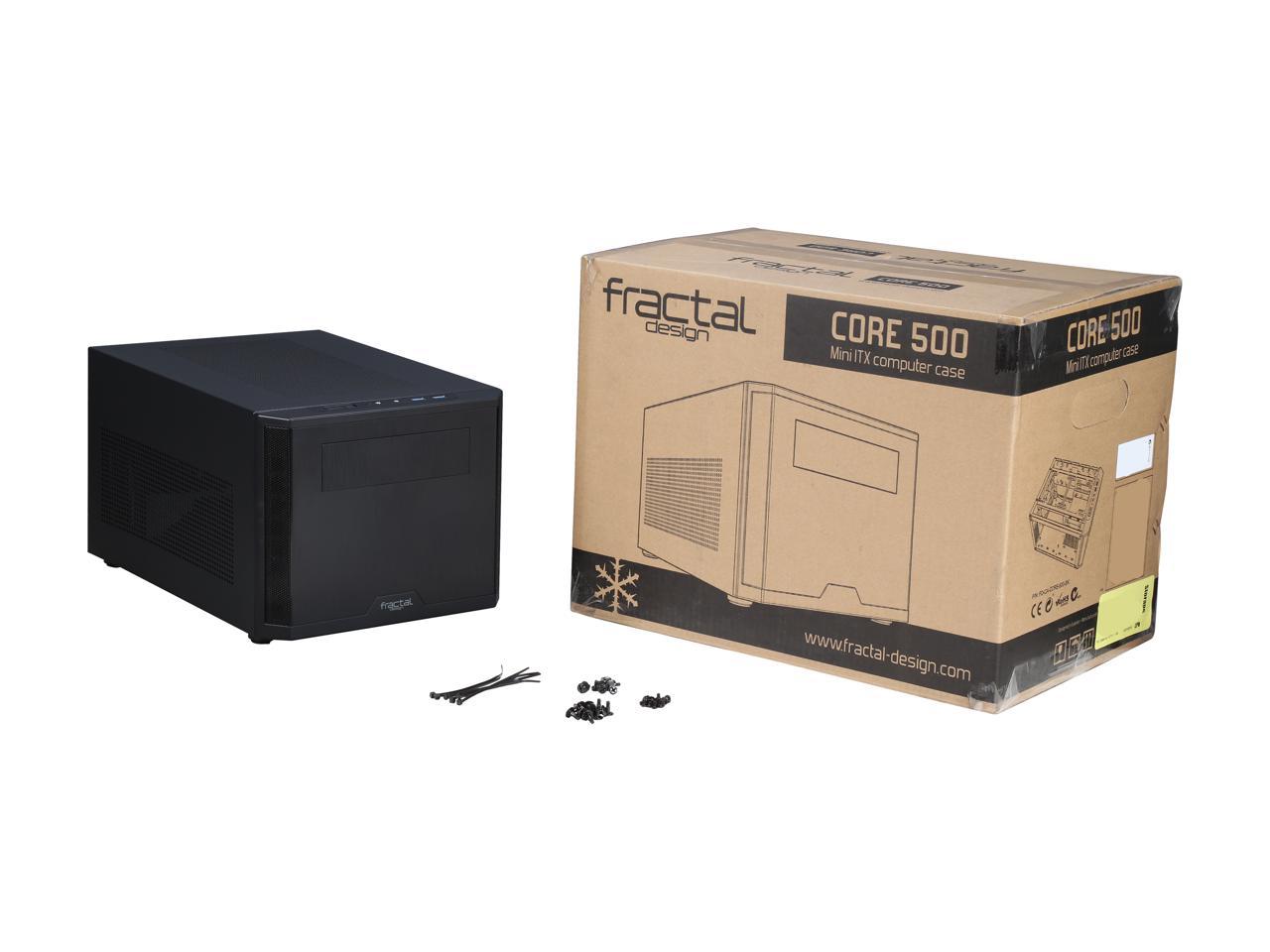 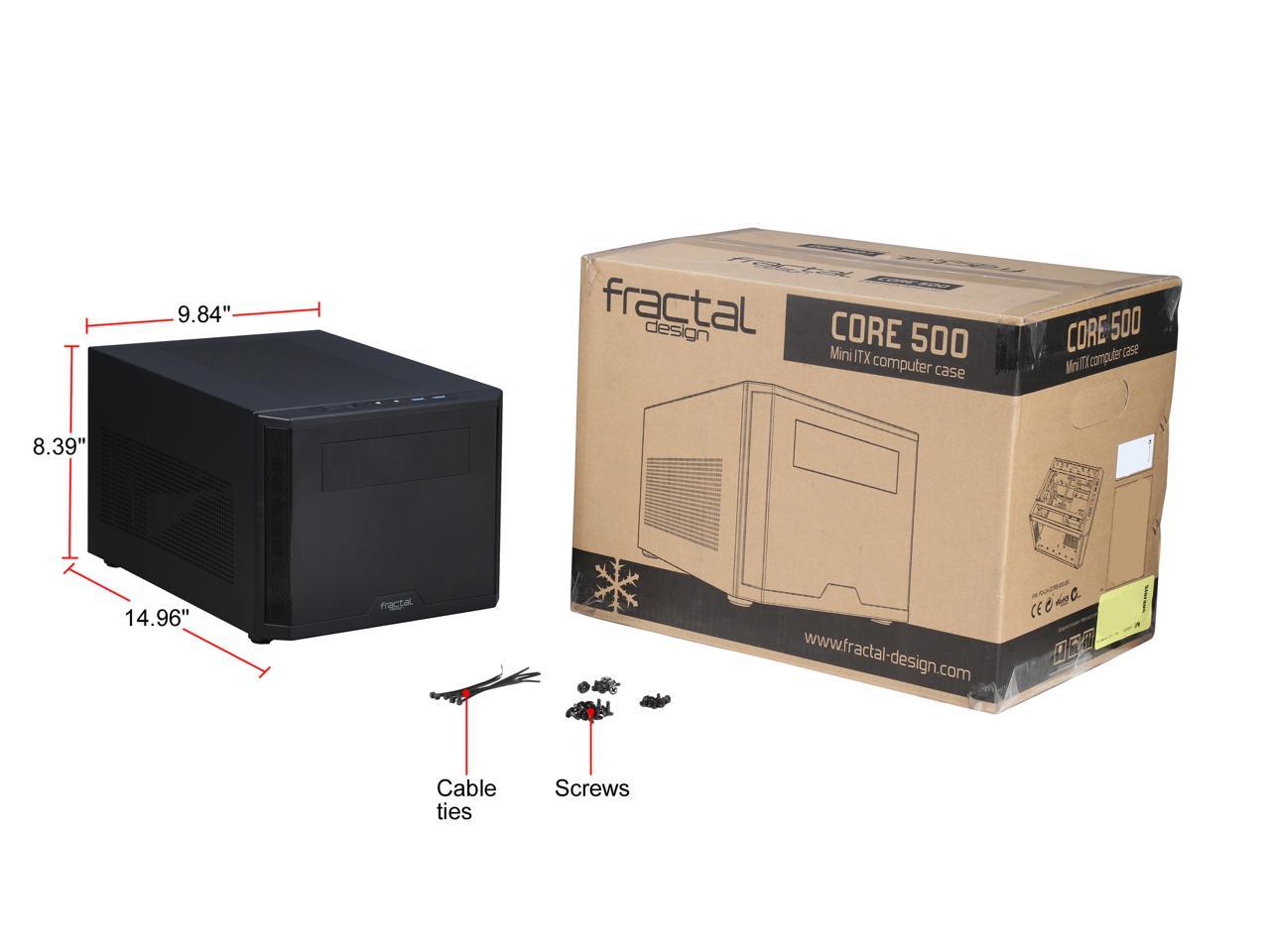 The Core 500 is a small, compact chassis that lets you build your computer without compromising on component selection.

The case comes with one Silent Series R3 140mm fan which offers great cooling from the get go. For those who wish to expand their cooling ability there is room for an additional two 140 mm fans, water cooling radiators up to 280mm or air coolers up to 170 mm in height.

Additionally, with minimal compromise, the Core 500 can fit one 5.25" drive, three 3.5"drives and three 2.5" drives, allowing you to use every last square millimeter of this compact, 19.5 liter case. Pros: An ITX case with all the standard user-friendly Fractal Design touches: sturdy, fairly quiet, classic understated look, comes with dust filters to keep maintenance down, relatively easy to build in. Really a fan of the faux brushed aluminum on the front. I know some people have said they've had trouble with the cover, but I didn't run into any. Lots of capacity -- swallowed an ATX build, including a full-size GTX 960 and a DVD drive, with nothing changing except the motherboard. Admittedly required a lot of difficult and unattractive cable management, but half of that's just me being bad with cables, and my temps ended up being all right anyway. The case is well ventilated (intake and exhaust slots for PSU, GPU intake slot, three 120/140mm mount points on the back and top), and looks awesome with a 120mm Rosewill blue-LED fan in one of the top slots. Also, it just feels a lot nicer than having a big fat ATX tower hogging the desk in my small room.

Cons: Power and reset buttons feel cheap, in contrast to the rest of the case. The power supply mount (in which the PSU lives at the front of the case and is connected to a plug on the back using an internal extension cable) is slightly annoying, because it means you have to remove the cover to turn the PSU itself on and off. HDD activity light is bright enough to be distracting in day-to-day computer use. I also wasn't a huge fan of the expansion card mounting mechanism, which uses a sliding piece of metal on the outside of the case to push down on a card's mounting brackets (there are also holes for screws, but I had trouble with the included ones) -- it's fiddly and doesn't seem to keep the card very secure. None of these are big issues, but they do add up to one egg off.

Overall Review: I'd recommend this if you have a lot of hardware (especially a DVD drive), want a small (although not tiny) ITX case for less than $75, and don't mind a couple of hours in cable-management purgatory. I picked it because I wanted a case I could carry on an airplane in hand luggage, which should be possible with a duffel bag and some judicious packaging. I managed to strip the screws on the expansion-card bracket. In their place I used some spare SSD screws, which worked well. Update: I work with the computer on my desk immediately to my left, and the level of the PSU exhaust means that it blows warm air directly onto my left hand when I'm typing. Not really a problem, but worth noting when you're thinking about setting up your workstation (although, in these New England winters, it might actually be helpful!). Second update (6/6/2016): Confirmed: this case is great for portability. Brought my build on a four-hour bus ride, took it through Boston airport security in a padded duffel bag as a carry-on, flew to another state with it in the overhead bin (the airplane was an A321, which isn't huge), and got it home with absolutely no trouble or damage. The luggage's total size was technically slightly larger than the permitted carry-on dimensions, but temporarily removing some padding from the bag would have fixed that if necessary. Although I can't promise that no airport security officer will ever be concerned about this case, in my situation all I had to do was take it out of the bag to be X-rayed, just like a laptop. In the bag with all my parts installed, it probably weighed about twenty pounds, and was easy to carry if a little bulky. Hopefully this is helpful for any other people who find themselves, for one reason or another, looking to build a PC they can take on a plane. I'd recommend a duffel bag (a little larger than the case's dimensions, maybe an extra inch on each side to allow for padding) and some kind of durable shipping foam, then some kind of protective film (I used packing tape, lol) applied to the plastic parts for protection and placed over the vents to prevent dust and foam bits from getting in. I might not even risk it on the next trip and just take Amtrak or drive, but hey, now I know that this is an option.

Cons: Like everyone else has said, the PSU mounting is horrible. Depending on your PSU you may not be able to mount the fan down because of where the extension cable connects. I had to mount mine with the fan up and its only held in by 2 screws. One thing I haven't seen mentioned is the fact that you can remove the bracket completely and then attach the PSU to the bracket, then slide it all back in and screw the bracket back into place. This is done with 4 screws (2 on the front inside and 2 on the bottom of the case)

Cons: -You gotta learn what order things can go into the case in

Overall Review: I was able to mount my 120mm rad/fan for my CPU up top, my 120mm rad/fan for my hybrid 980ti, two large hard drives, an SSD, a modular 160mm power supply, AND my bluray drive! I thought no way was I going to fit the optical drive too, but it fits! I was hoping to post pictures of it, but I don't think Newegg lets you...

Pros: Handsome case. Pretty well made. I really like the size, and the 500 will house some fairly high-end gear if you plan carefully.

Cons: Mounting a power supply is a complete pain in the neck. The worst part of the case design, and by a large margin. If you install in fan-down orientation, and your PSU is laid out like most, connecting the power cable extension is awful. You also can't screw in all four mounting screws, unless you have some mighty interesting tools. I got my Corsair in, but it took a LOT of fiddling, and I could only use 3 screws. This needs to be better. Also, the front-panel connector cables are gonna be hard to route if you mount an optical drive.

Overall Review: On balance, I'm not unhappy with the 500, but it could be much better. This rascal forces compromises some folks might not want to make. I installed a 120MM AIO unit in the rear position, and was therefore unable to use the rearmost fan mount in the top. Had I mounted an optical drive, the fan spot in the front of the roof would have been a really snug fit, and the front-panel connectors would have been a pain to route. So, as I said, I'm not unhappy with the 500, but it certainly pales quite a bit compared to Fractal's other cases.

Pros: Small case with excellent cooling. I have a Corsair H-60 cooler and My CPU only gets to 55c when gaming. Compact and I have a ton of stuff in it. GPU, DVD, Hard drives. etc.

Cons: I knew about the cons before buying it and have learned to master putting the case cover on by myself. :)

Overall Review: Full computer in a very compact package. Very happy with it.

Pros: -It fit my semi-modular ATX PSU (EVGA 600BQ), full-size GPU (EVGA GTX 1050 Ti SSC), and tall CPU cooler (Cooler Master Hyper T4) with a lot of room to spare. -It has really good airflow for such a small case, and a lot of cooling options. -The included fan is very quiet. -Has a very simple and sleek look and a small footprint.

Cons: -Putting the cover back on right is really difficult. -The dust filters are sandwiched between 2 layers of magnetic frame and the frames of both filters were separating when I got my case, I was able to get them to stick back together, however. -The magnets on the dust filters are really weak and they don't like to stay attached to the inside of the cover when wrestling it back on. -not very many zip-tie mounts for cable management

Overall Review: This was the case I chose to dip my toes in the water on my first Mini-ITX build and I chose it because it would comfortably fit all of the parts that I already had from my last mid-tower build. I chose to remove the 5.25"/3.5" external combo drive bay in the front and I mounted the included 140 mm fan in the top front as an intake fan with a leftover 120 mm fan in the back for exhaust. The removal of the drive bay also gave me a better option for cable management allowing me to loop many of the cables behind the front panel. Overall, I'm super pleased with my choice in this case.

Cons: -PSU, MB, and GPU did not fit as the ATX 12v was blocked in the arrangement, however this is probably my own fault for ordering the power supply I did. (Rosewill Photon 650 Gold Modular). Can't take a star off for something that's your own fault. -I am unable to remove the 5.25 inch ODD bay, the screws are stuck dead and cannot turn under any circumstances, I've actually damaged one screw trying to get it off. I feel as if this an issue with the case as I kind of need this tray uninstalled for various reason (one being cable management).

Overall Review: -I'm not sure if this is a con, but I seem to be missing the small filter for the PSU intake on the side of the case (small rectangular on the right side of the case. It's not small enough to dock a star for, but I would like some clarification on that.

Cons: I feel that the power supply location could've been done a bit better.