Purchases from these Sellers are generally covered under our Newegg Marketplace Guarantee.
506 Ratings (93% Positive)
Shipped by Newegg
Sold by: 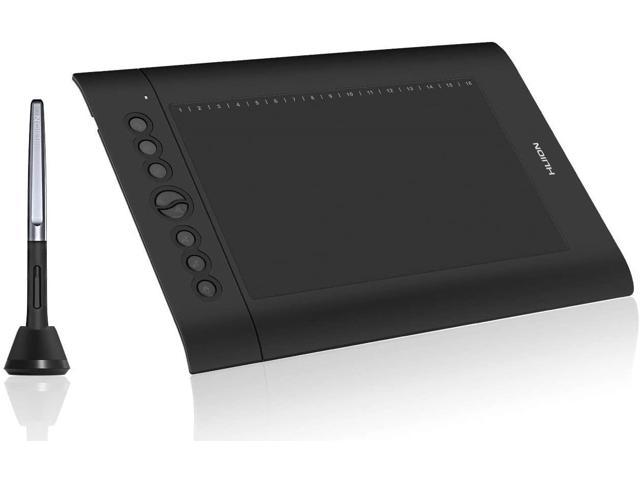 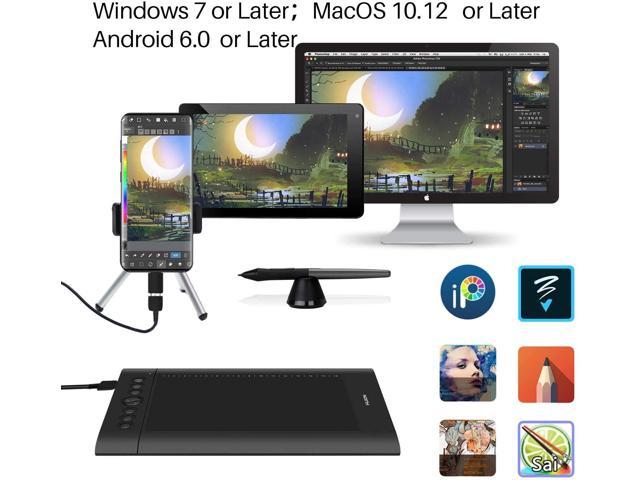 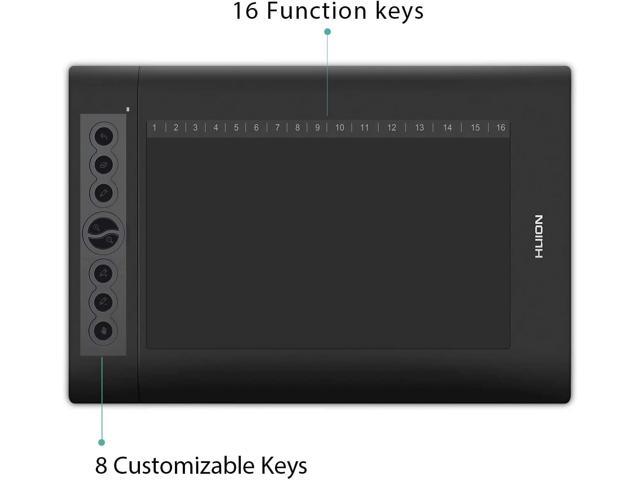 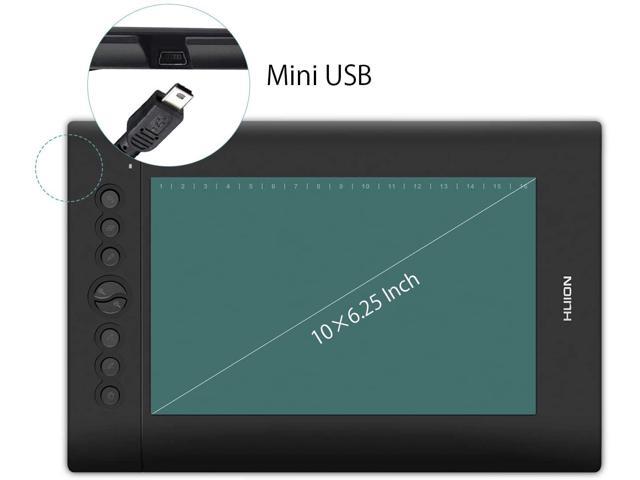 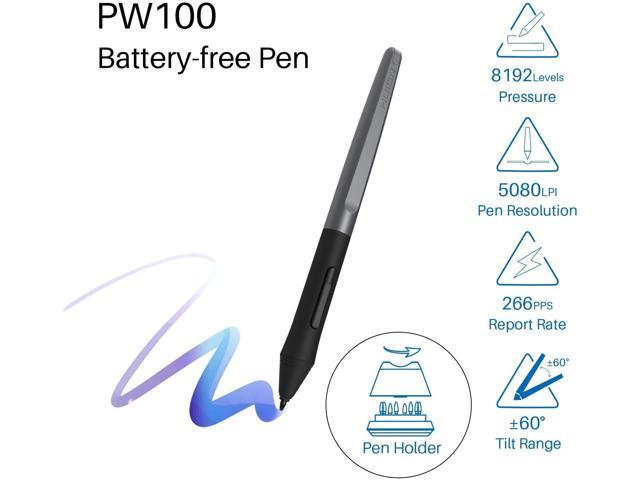 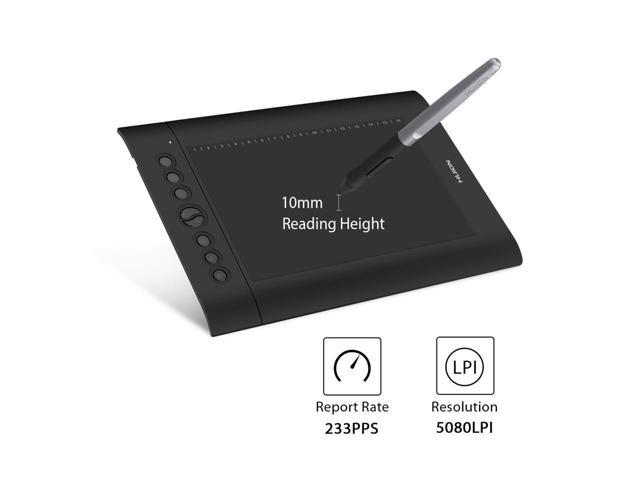 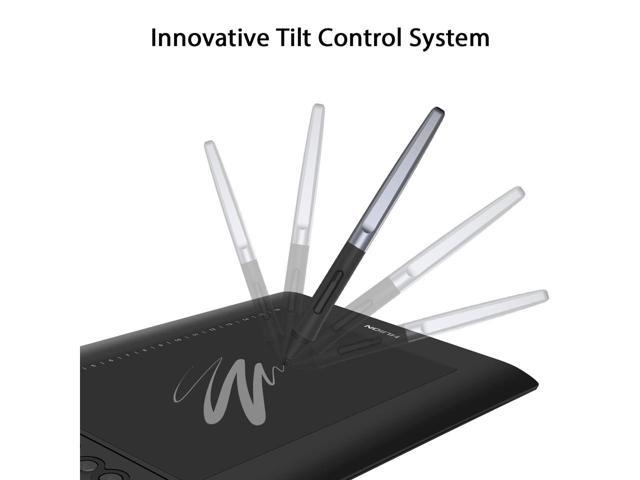 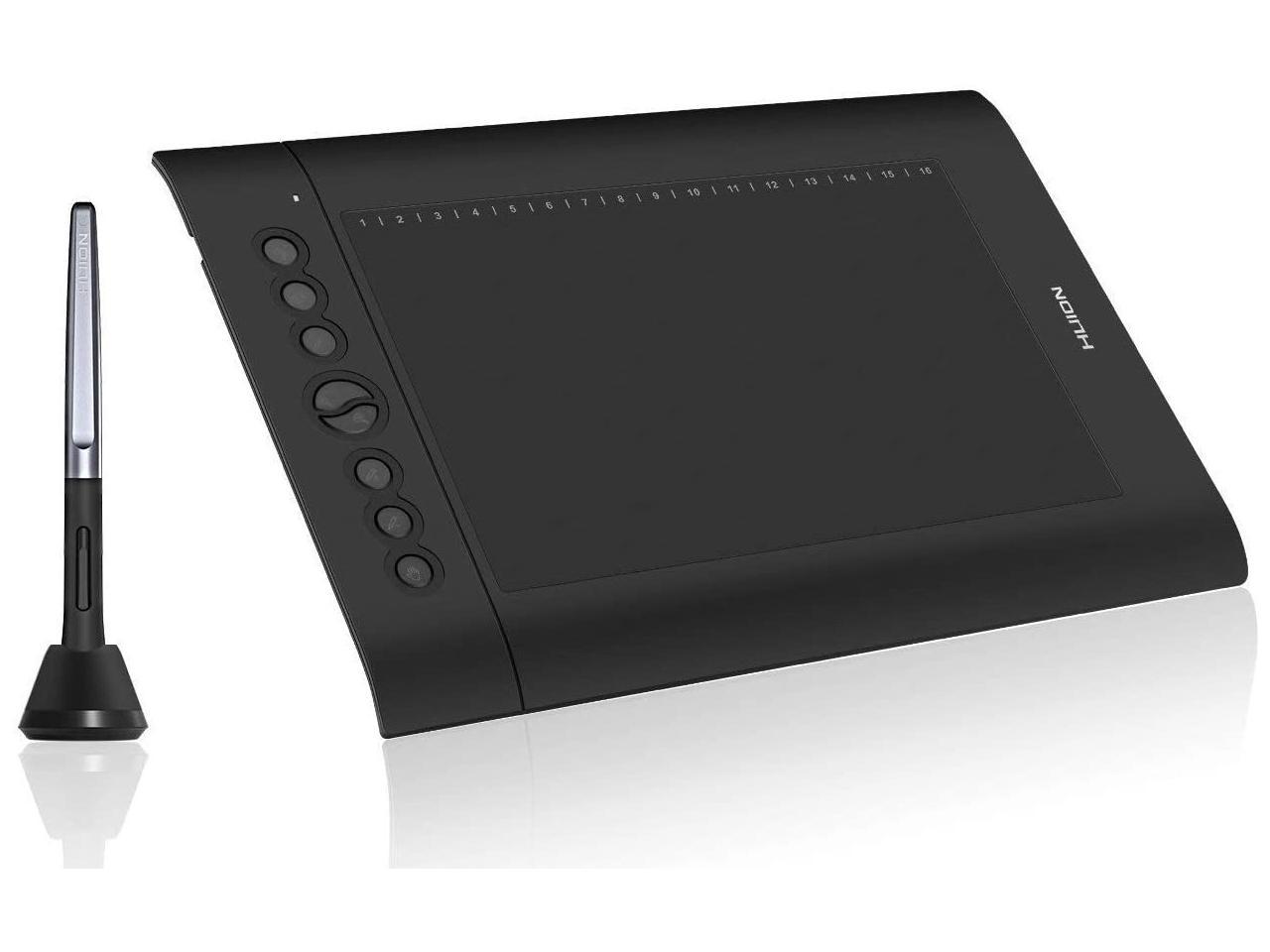 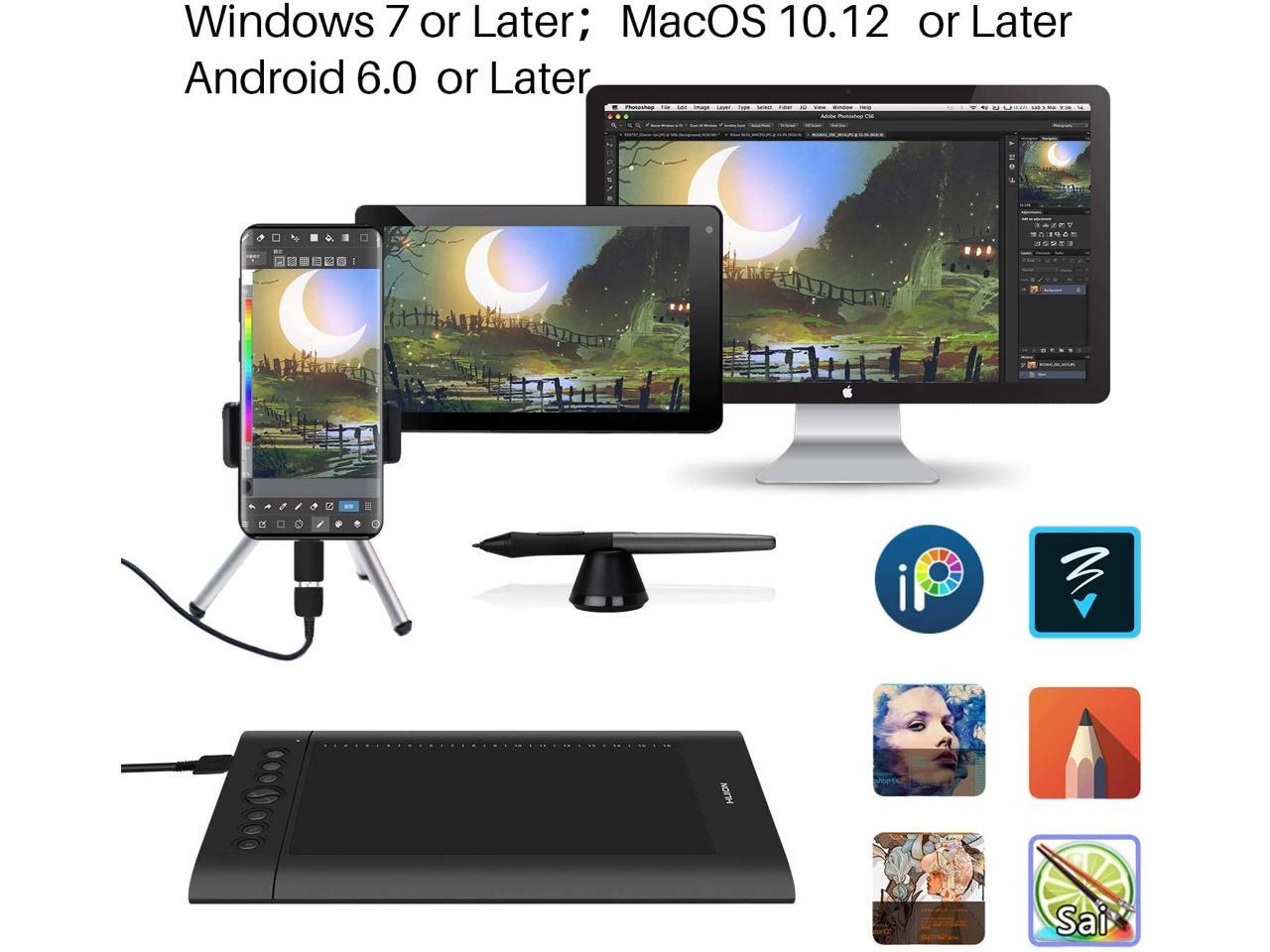 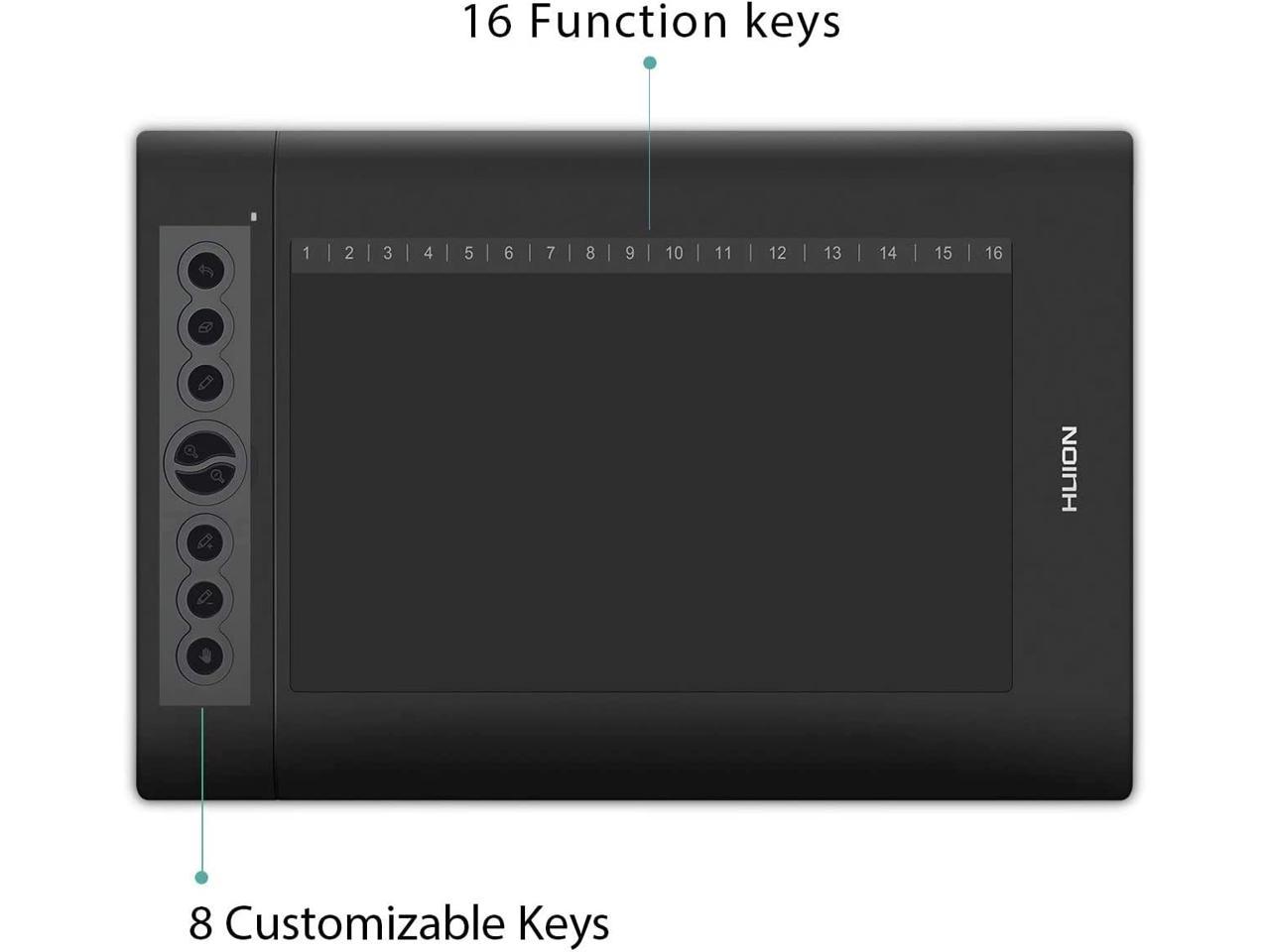 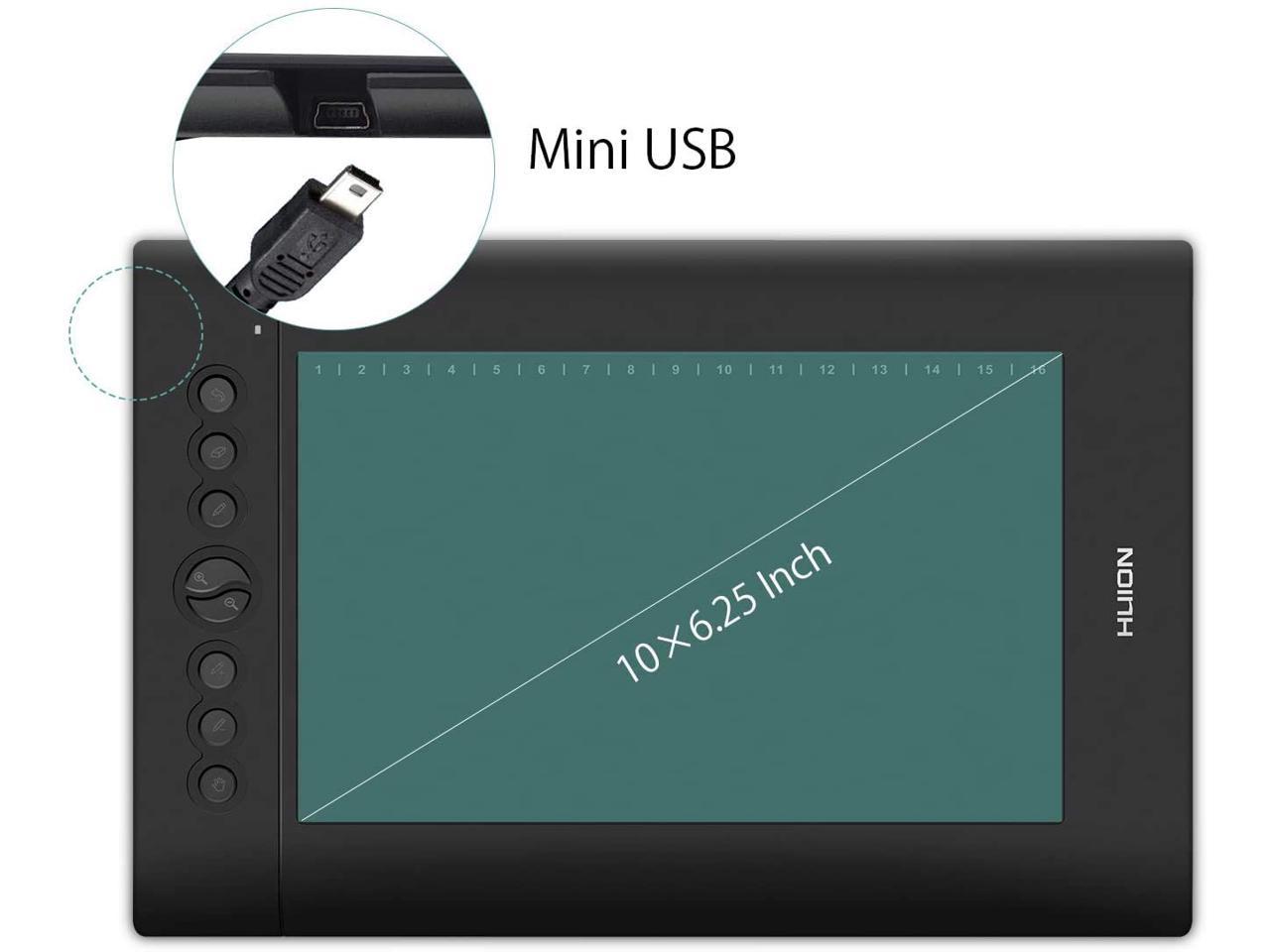 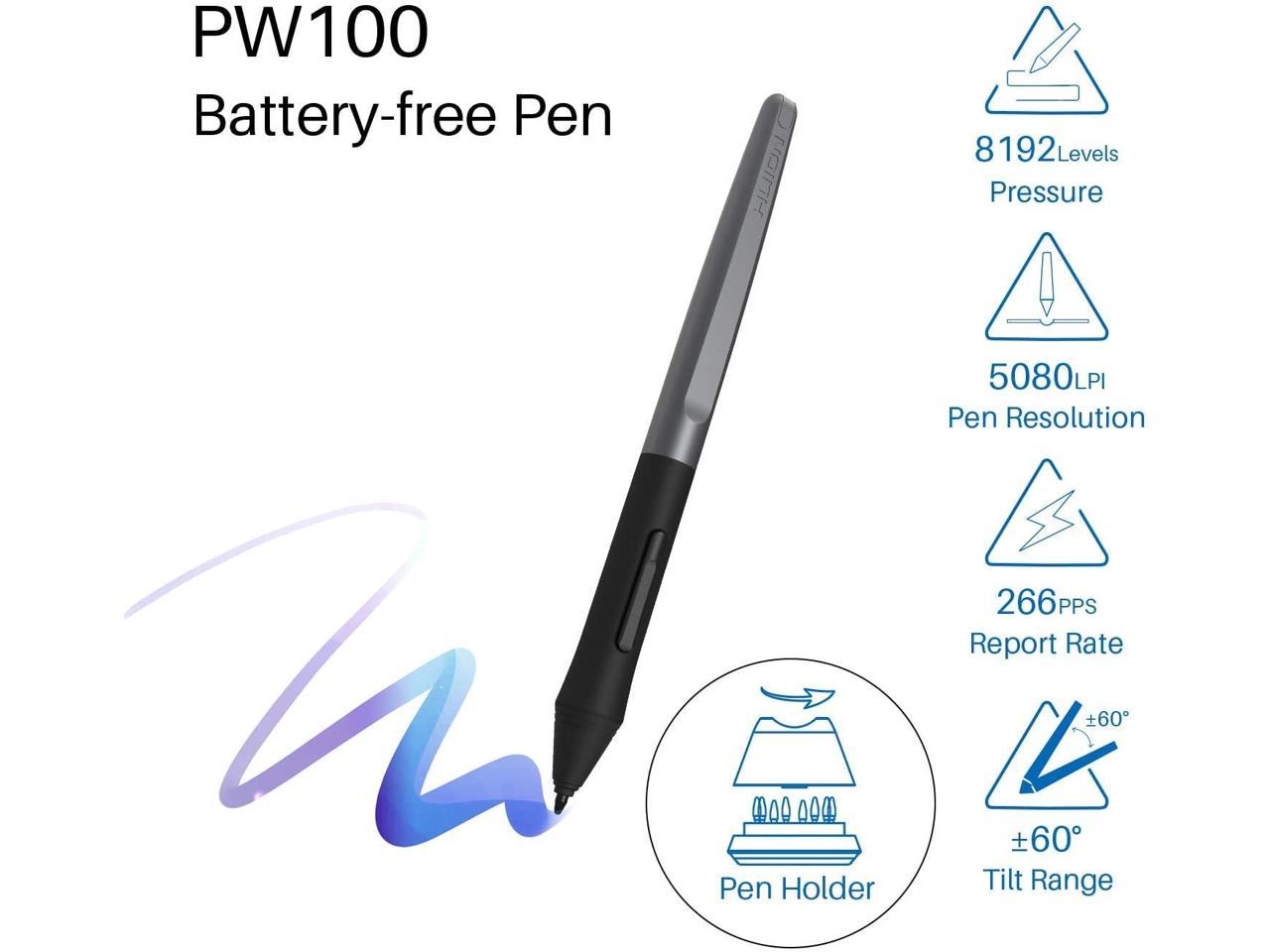 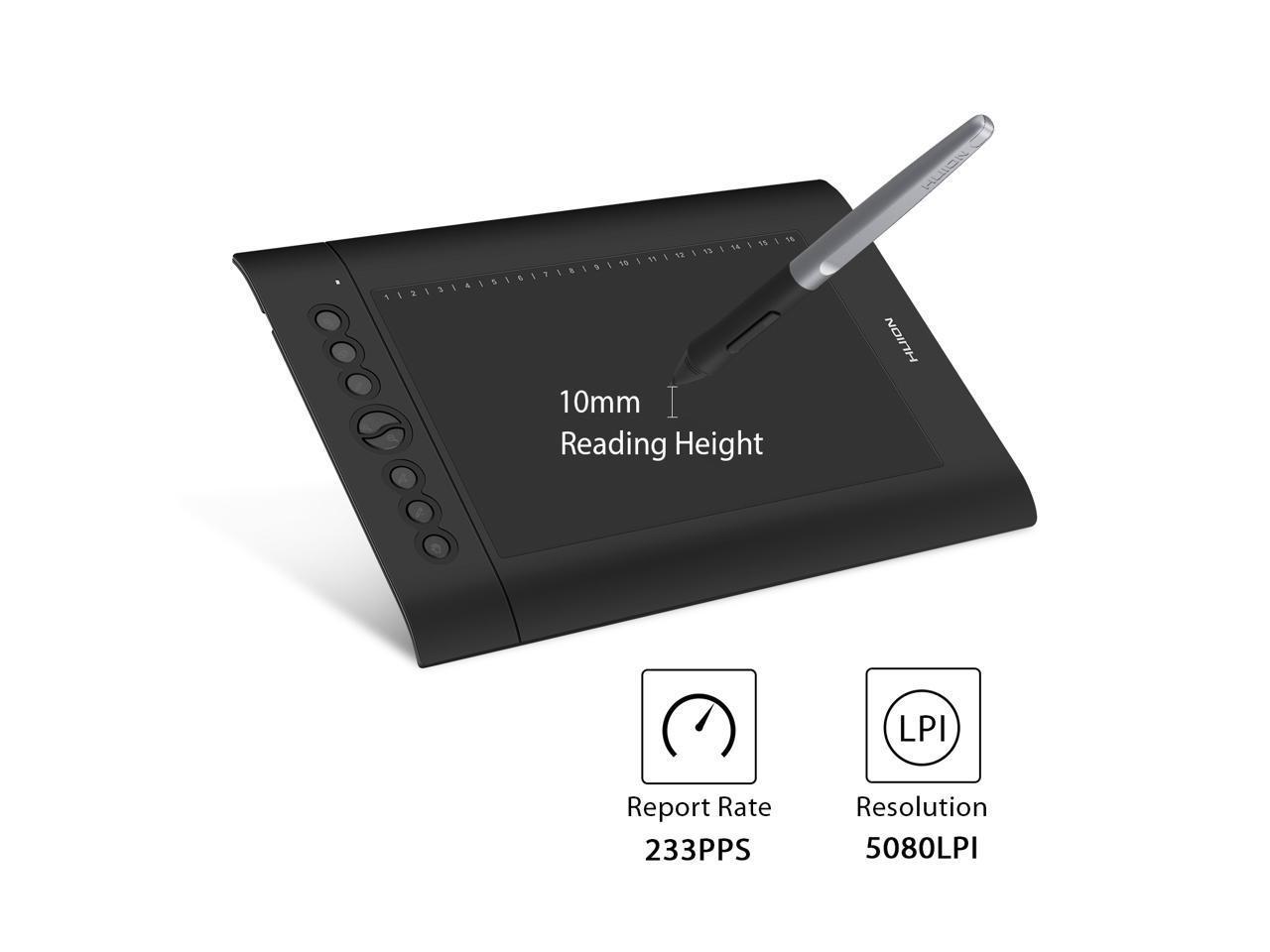 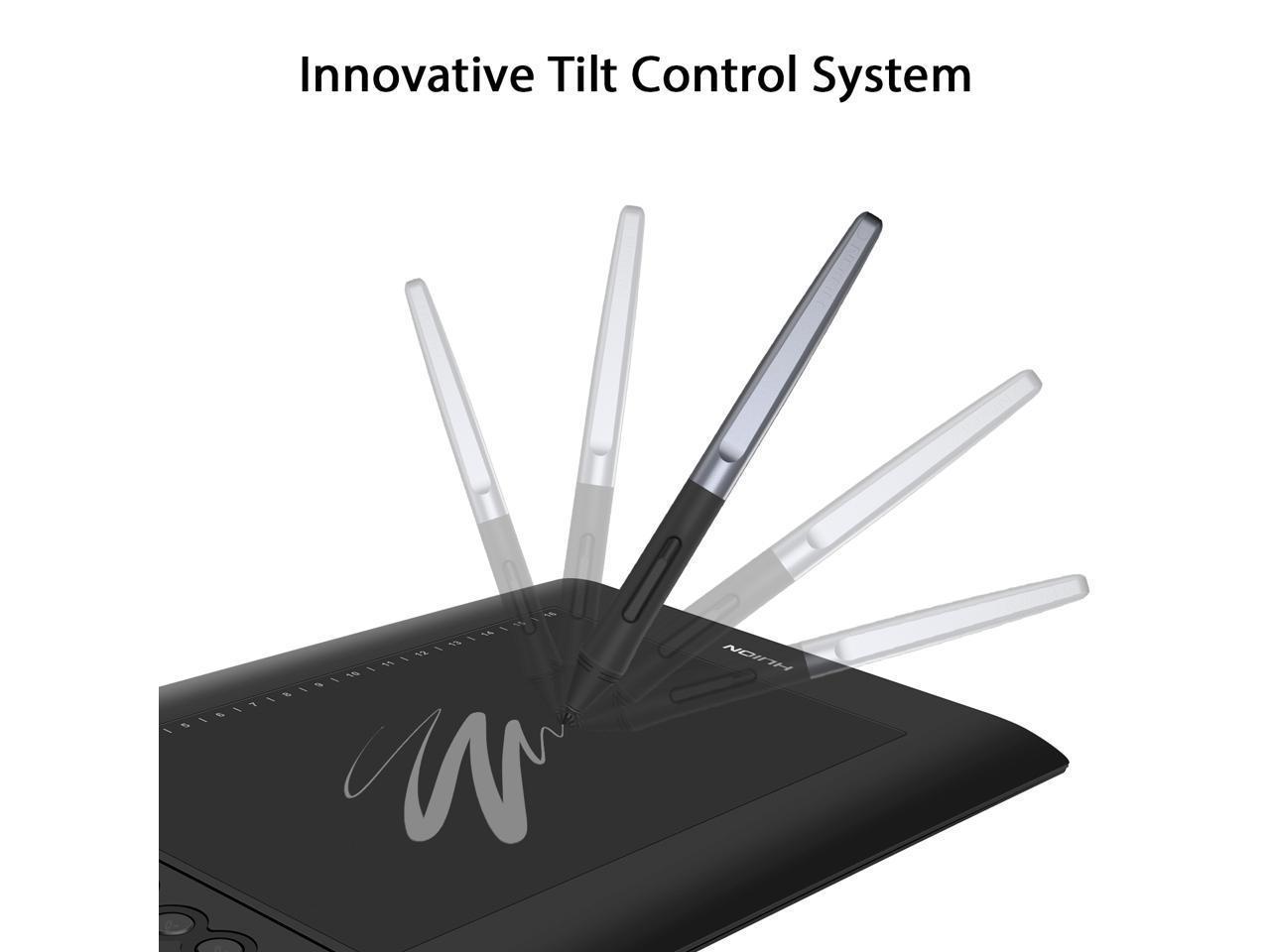 Wonder is created down your nib.

Bring your idea to life with this feature- and value-packed drawing tablet. With 8192 levels of pen pressure sensitivity, 10mm reading heights, 5080LPI in resolution, plus 233PPS in reading rates, you'll experience the ultimate in precision and control. The pen use battery-free technology, so you can write, draw or create without interruption. For you convenience, this tablet has eight express keys on the left side and 16 soft keys on the top of active area, plus two pen buttons—all are customizable to suit your preference. Plus, this tablet supports Android OS (6.0 and above), in addition to Windows and Mac OS, offering you more ways to transform your creativity into reality.

What is in the box:

Touch and get inspired.

Get yourself inspired with the soothing touch brought by the mold texture finishing of the tablet, which makes the device more resilient to scratches. Better stability is ensured with the help of the rubbers applied to the rear case.

±60°tilt support ensures lifelike rendering of shading added to your works, without compromising the delicacy of each line input.

Create with details in mind.

8192 levels of pressure sensitivity bring users more convenience as they express themselves with lines of various shapes, with every detail delicately rendered.

Delicacy unfolded in each pixel.

5080LPI pen resolution enables you to express yourself freely and focus more on details. The higher the value is, more detailed modification can be realized on your works.

233PPS report rate ensures smooth lines without any lagging. Each line is naturally rendered for accurate expression of arts.

Facilitate your work by building yourself an exclusive studio with 8 programmable hard press keys and 16 soft ones.

Lovely pen holder that contains 8 spare nibs inside is created for you to rest your pen and prevent your pen from falling off from the desktop.

Operation on Android now is supported.

Apart form computers running on Windows and macOS, Android (6.0 and above) devices including phones and tablets now are also supported to be used with H610 PRO V2, which will further facilitate your works on mainstream drawing and designing software of various kinds.

* An OTG connector is required for use with Android phone or tablet. Sold separately.

Just the right size for your backpack.

Pen tablet with 353 x 245 x 10mm in dimension is easy-to-carry as it perfectly fits your backpack, with which creating will no longer be limited indoors.

Pros: Nice feel. Nice response. No battery needed for the pen. Good amount of replacement nibs. 10 in a polybag and 8 more in the pen holder.

Cons: Oh, maybe that the pen holder isn't weighted and the pen does not seem to fit well in the holder.

Overall Review: As an independent art jeweler I have a lot of graphic duties. At a second hand store I found a Wacom Bamboo Fun that didn't come with it's pen. I received a Newegg gift card for Christmas and I either wanted a gaming mouse or a new pen. Pens are not available for my Wacom model. It took awhile for me to decide this, but I decided a new tablet was more practical than a new gaming mouse. After researching the matter, reading reviews all over, this appeared to be the best product for the money. I am very pleased and happy that I went this direction. I should have purchased a functioning drawing tablet a long time ago! I received it a day Before it's ETA!

Pros: Great deal on a fairly big, pressure sensitive tablet... This is the best tablet for the features at this price range.

Cons: I use it left handed, and my hand rests on the buttons, but I don't use them ordinarily anyway. I have them turned off, but they are configurable for a lot of nice features.

Overall Review: After using W***m tablets for a number of years, and Calcomp units from Egg***d a long time ago, I couldn't pass up the price on this. This purchase is a second one so I can use it on my graphics workstation. The price on the first one was great, and this one was on sale at an even better price. Two thumbs up and a big smile.

Overall Review: This is my first graphics tablet and after using it for a few weeks now, I love it! It was easy to set up, very responsive and feels very natural. I am still setting up key bindings, but it is very intuitive and easy to do. Currently using it with Krita and Blender and have not had any compatibility issues.

Cons: Mostly *other* vendor (app) related: most vendors don't yet support the tilt feature, and the manufacturer's product names could use a bit more standardization and differentiation, as it was tough to be 100% sure the reviews and vendor comparisons were talking about the same product, plus I downloaded the wrong driver initially. Definitely smaller issues but I mention them to help the company (and other purchasers) understand where extra diligence is needed.

Overall Review: After 3 different Wacoms over the last 20 years, I was continually let down in multiple ways, and was nervous about switching from the brand d leader, and it's still early days (only a few apps tested, no hardware or software migrations yet, only a few weeks use), but this appears like a solid purchase with good design considerations for likely long term use. I'd definitely recommend it, and will look at Huion again for other items too. UPDATE: 1 year later. Support from other apps is gradually improving, and the product is still as sturdy as initially. It uses standard physical ports (no proprietary cables) so I easily replaced the vendor's cable I had misplaced. Drivers have had a few updates since purchase, so that's good to see. Huion support put Wacom to shame. Only downside as another reviewer mentioned was the lack of weighting in the base: you need to pay attention to not knock it over (Wacom does better in only that regard). Works amazingly well and easily, and my tablets tend to get moved around, so the good build quality has been reassuring. At this point, no more Wacoms in my future, and if ever flush with cash some time, I will consider the Huion display/tablets as an upgrade. Highly recommended. PS - I receive no benefit directly or indirectly from this review.

Pros: After three practice sessions with the Huion H6PRO V2, I was able to draw/paint a 28" x 22" digital watercolor painting suitable for framing. It was a learning curve, but not terribly so. It cannot replace the experience of using real paint and paper, but it sure comes close.

Cons: As with any virtual art, it is not the same thing. However this pen tablet has its place. It fought me a little when I was trying to draw certain angles, but I figured out how to use key commands in order to win. For instance, when I wanted to draw a fairly regular straight line on an angle, the tablet seemed to have a mind of its own. That is when I used two points and the shift key to accomplish what I wanted.

Overall Review: I would definitely recommend this product to others. The price was very reasonable. This is the reason that I did not purchase one sooner; all brands were just too expensive.

Did you find this review helpful?
Stephen L.
Ownership: 1 week to 1 month
Verified Owner
Works With Windows 10 yet do not buy if intending to use with Linux Operating Systems9/9/2020 10:03:09 AM

Pros: Works according to product description with Windows 10. Rotating ability to get the buttons out of the way for left handed users, good feature.

Cons: Does not work with Linux operating systems. I tried with AV Linux, Debian 10, and Fedora 30. Tried drivers that were suggested by support at Huion yet they did not work. Attmepted to use the .exe file through WINE application in Fedora, that did not work. Did not try this one developers file that requires some really technical and confusing procedure you need to upgrade the Linux kernel, and this is only a development tool that is not guaranteed to work. I personally did not buy this tablet to become some kind of developer and have to spend my time in trial and error procedures trying to get this pen to work on Linux operating systems.

Pros: Easy to use. Easy to install. It's just great.

Overall Review: My daughter loves it.