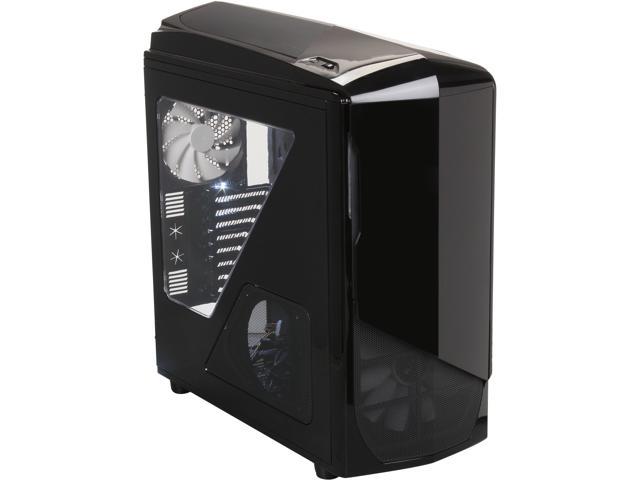 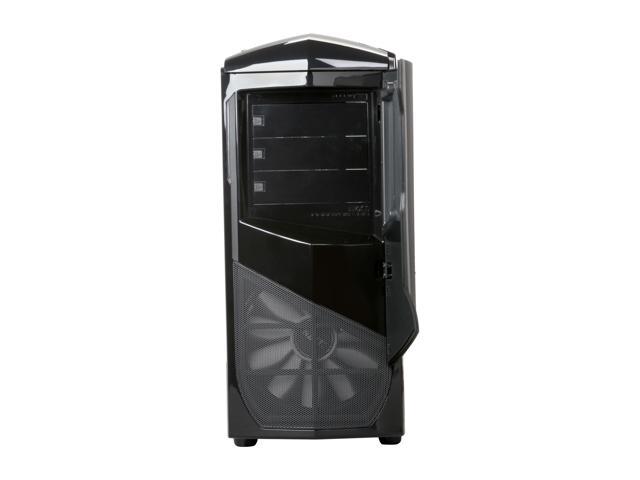 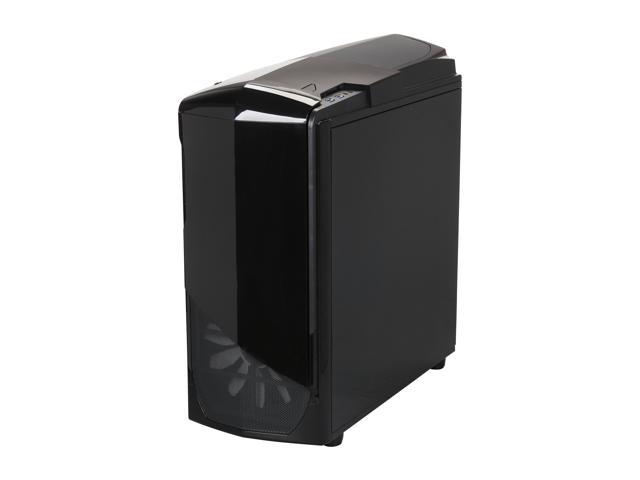 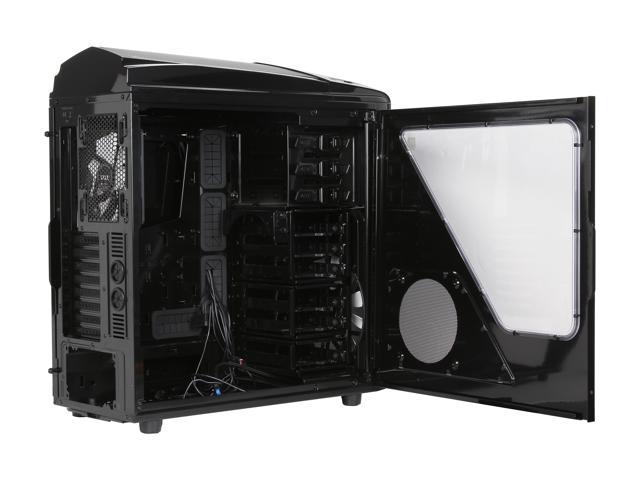 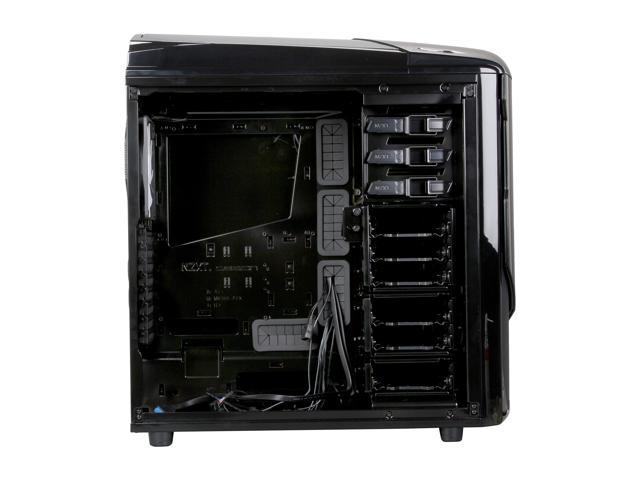 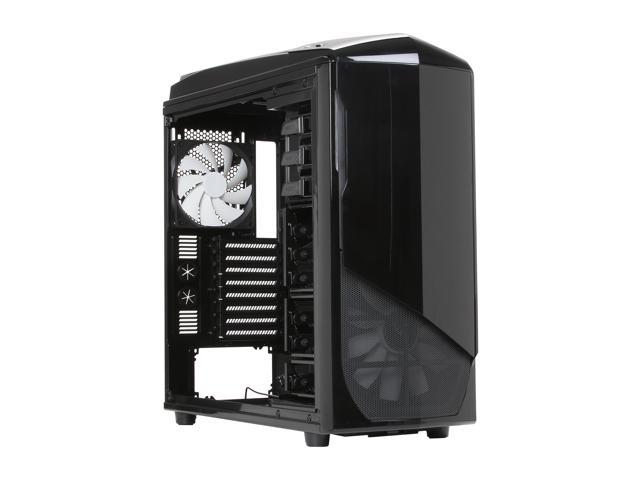 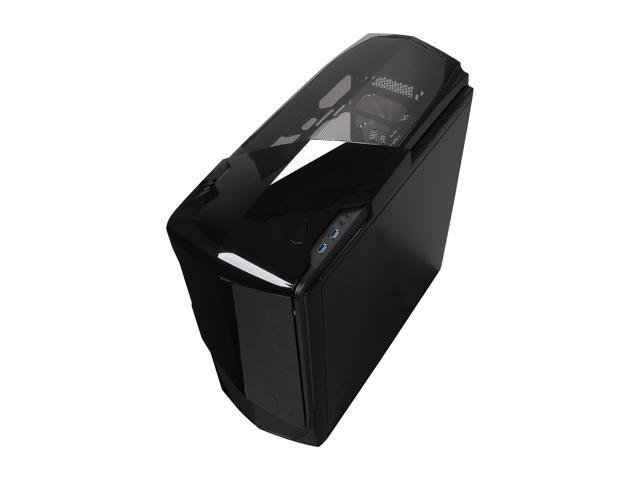 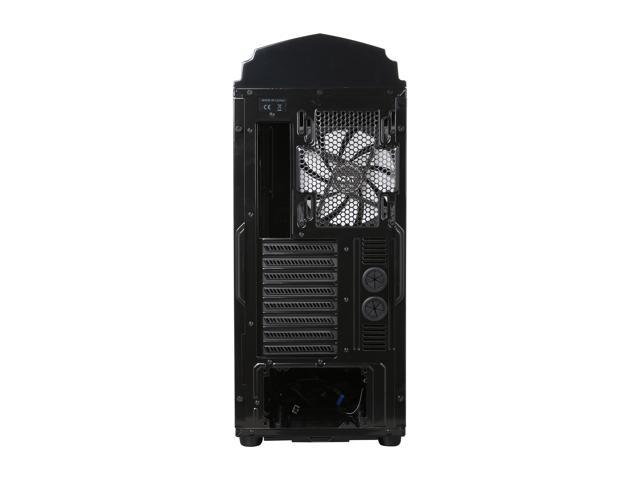 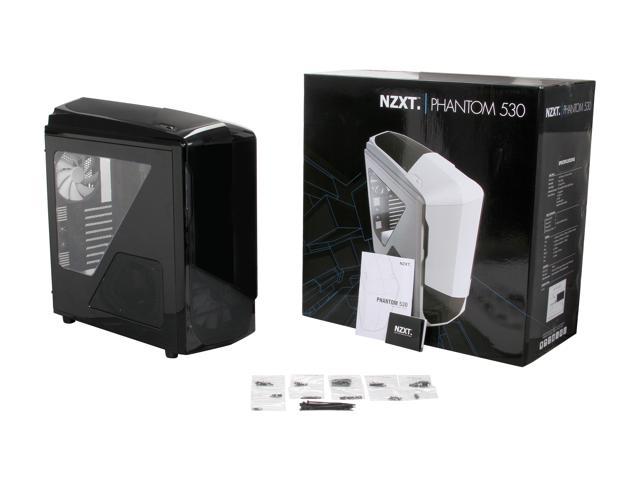 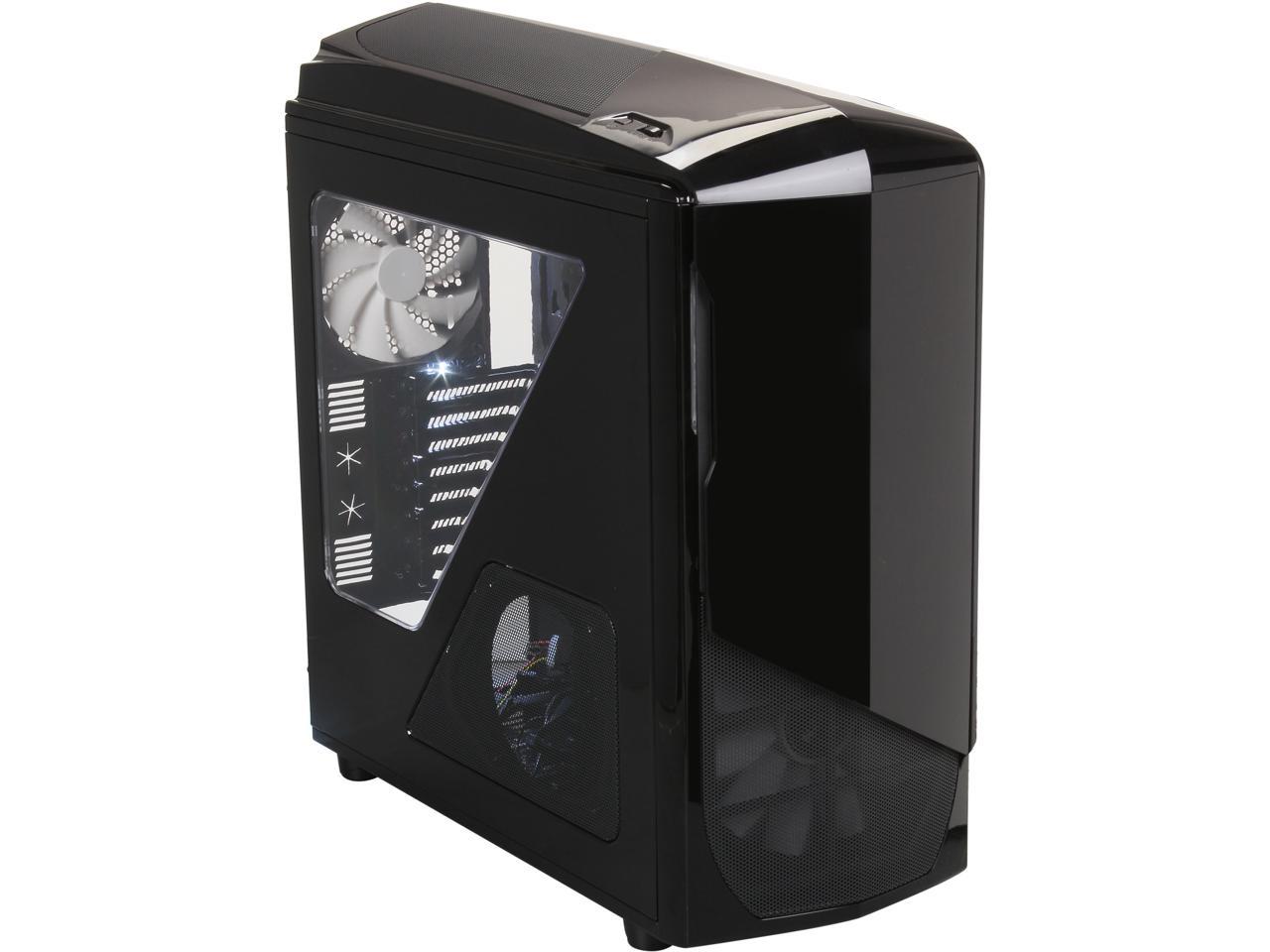 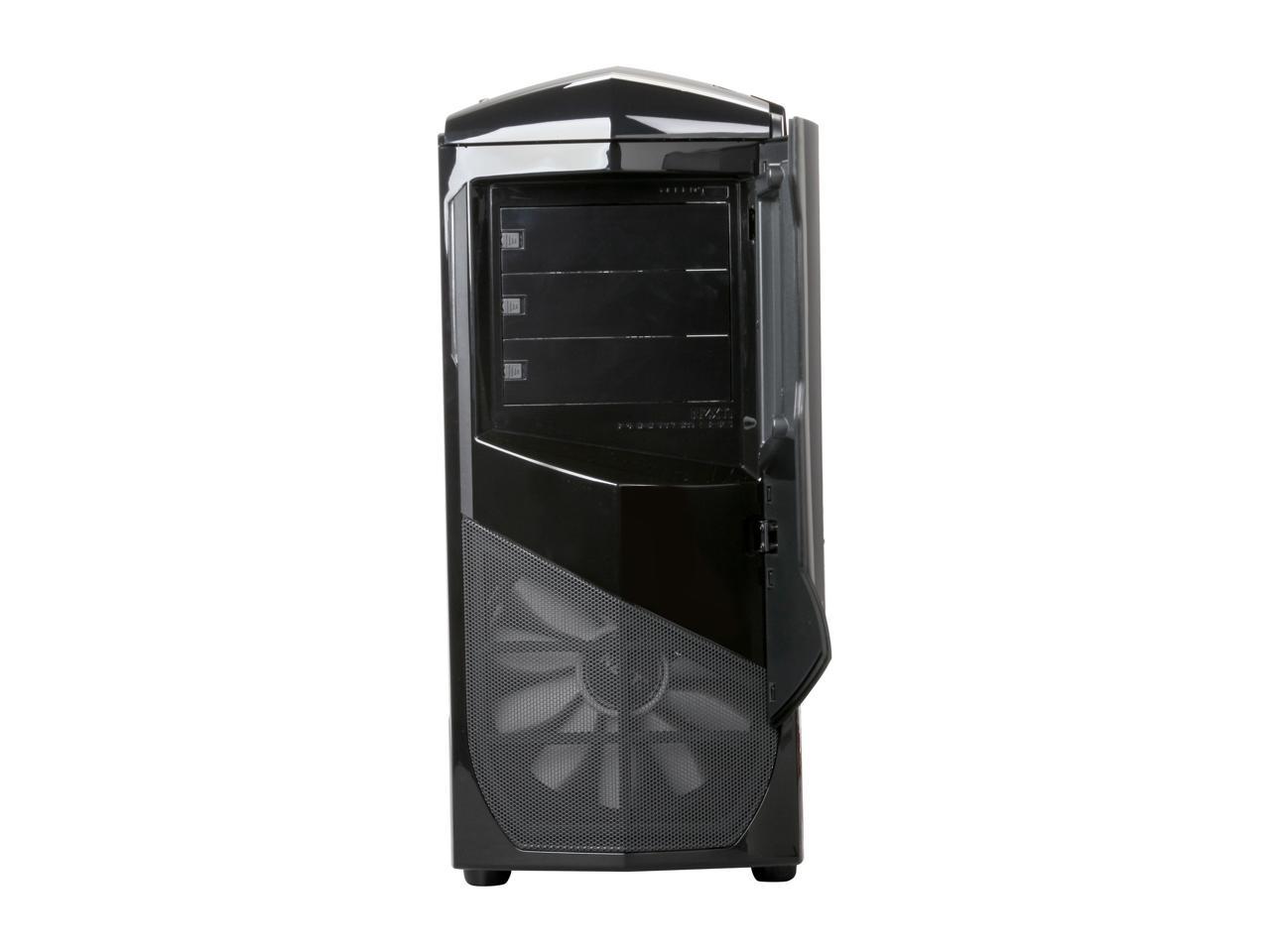 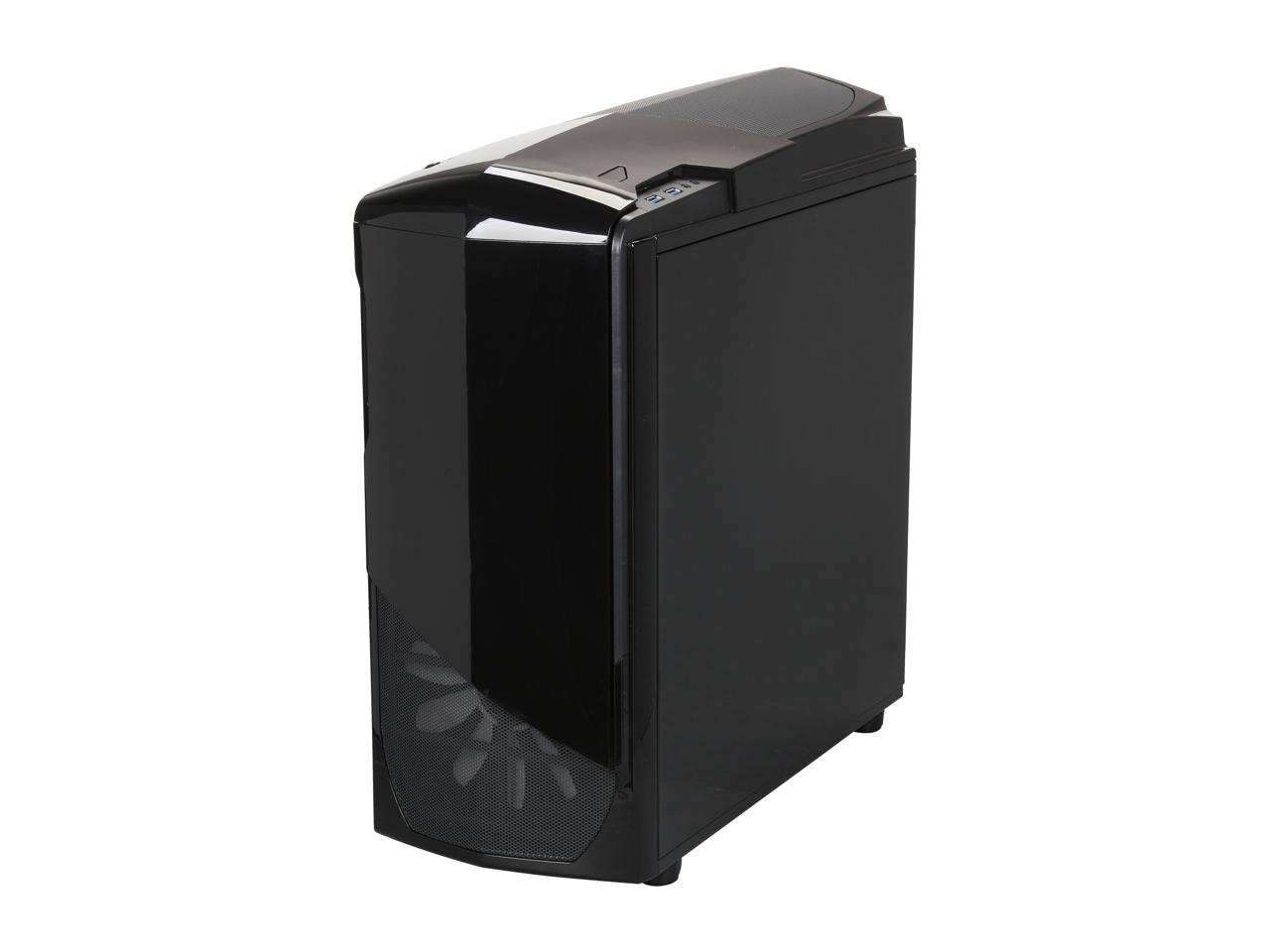 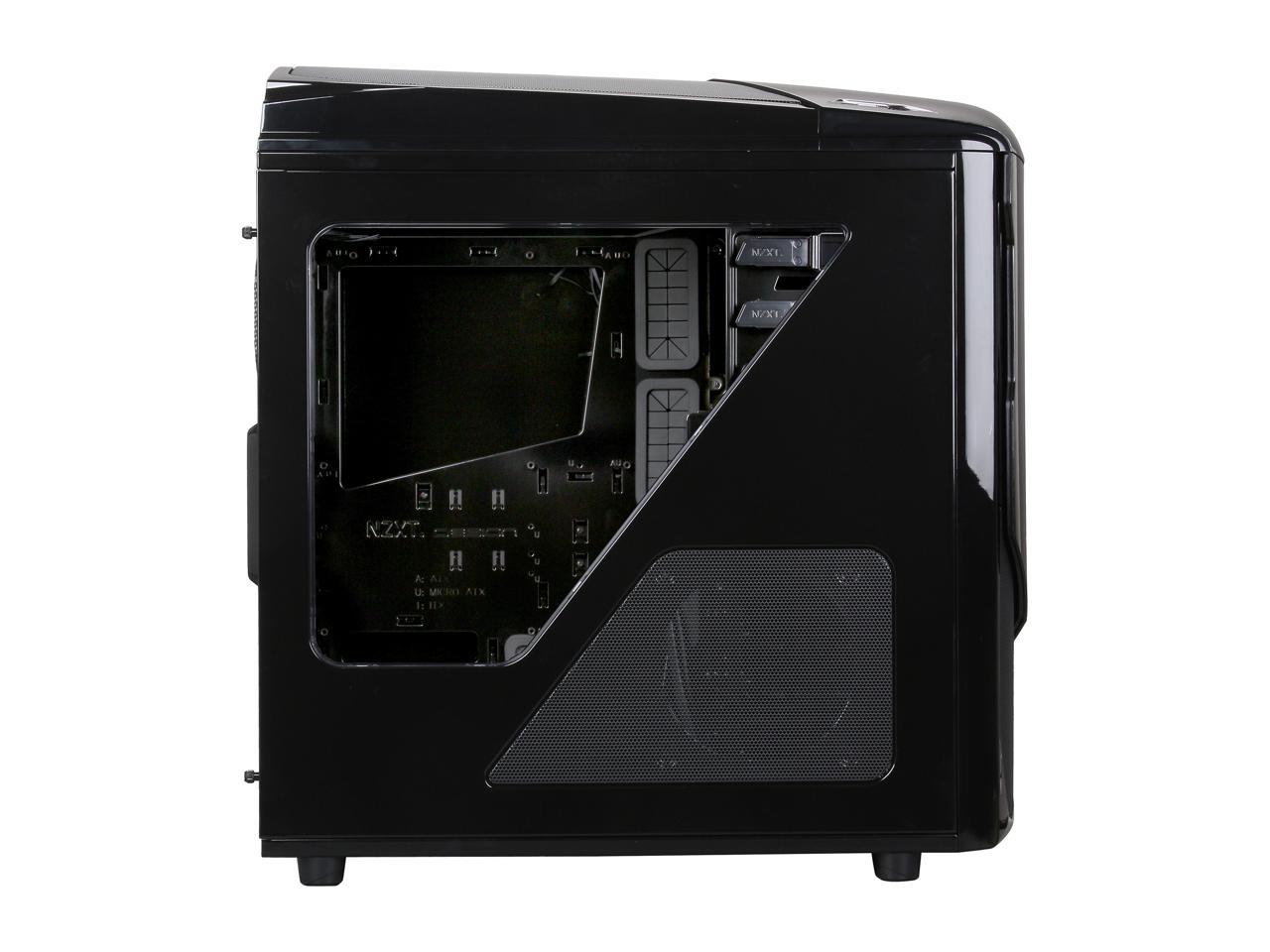 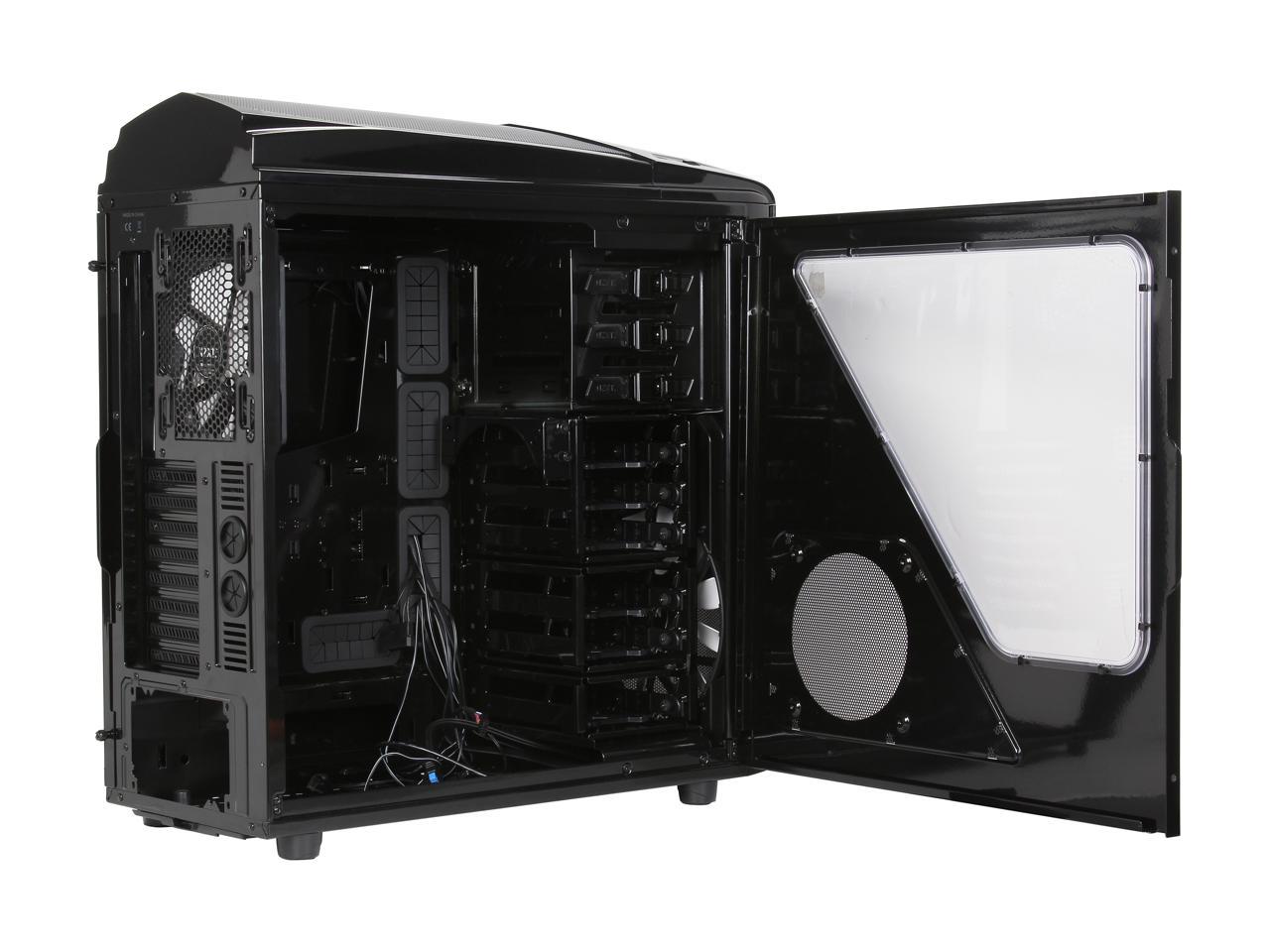 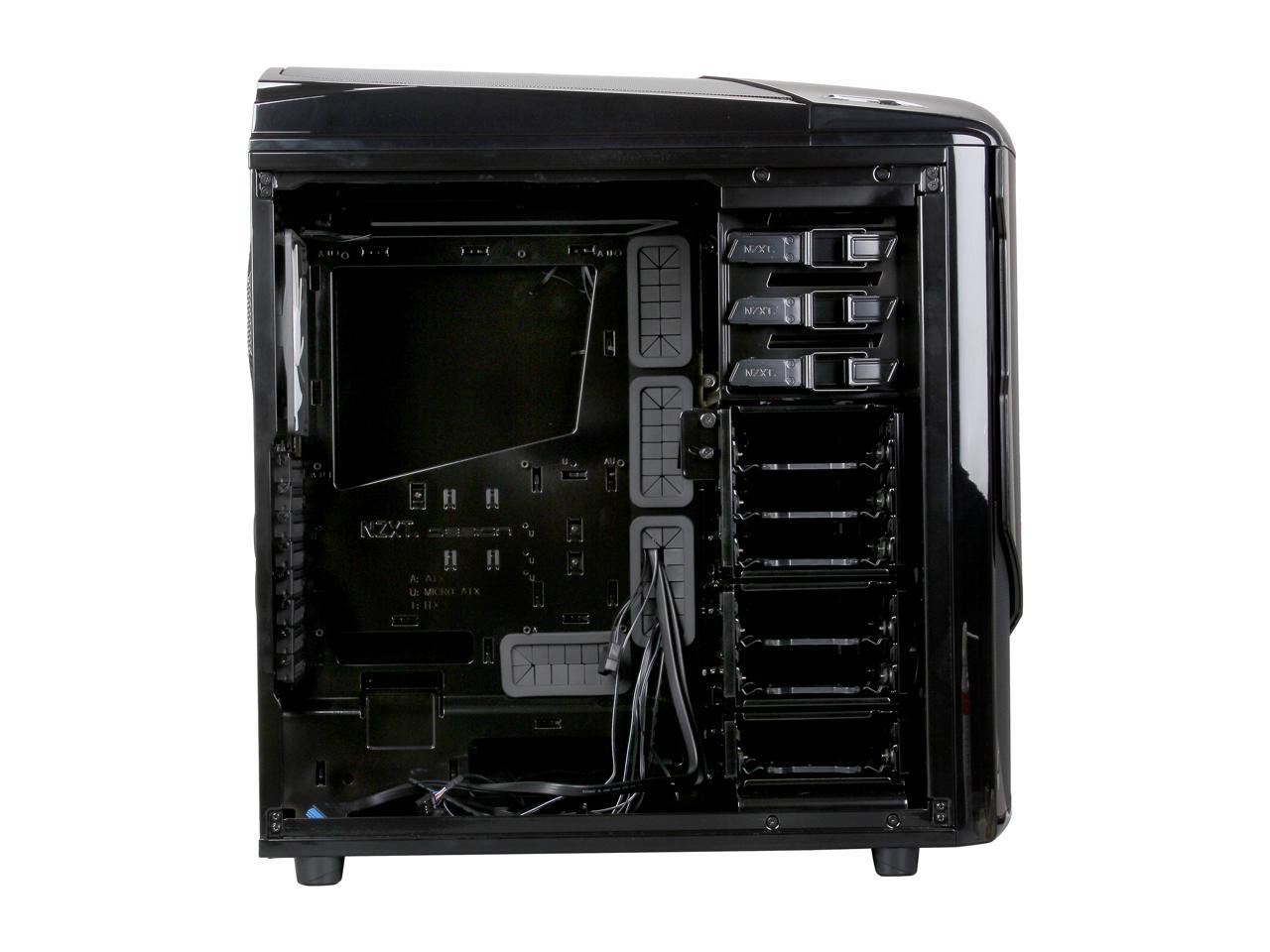 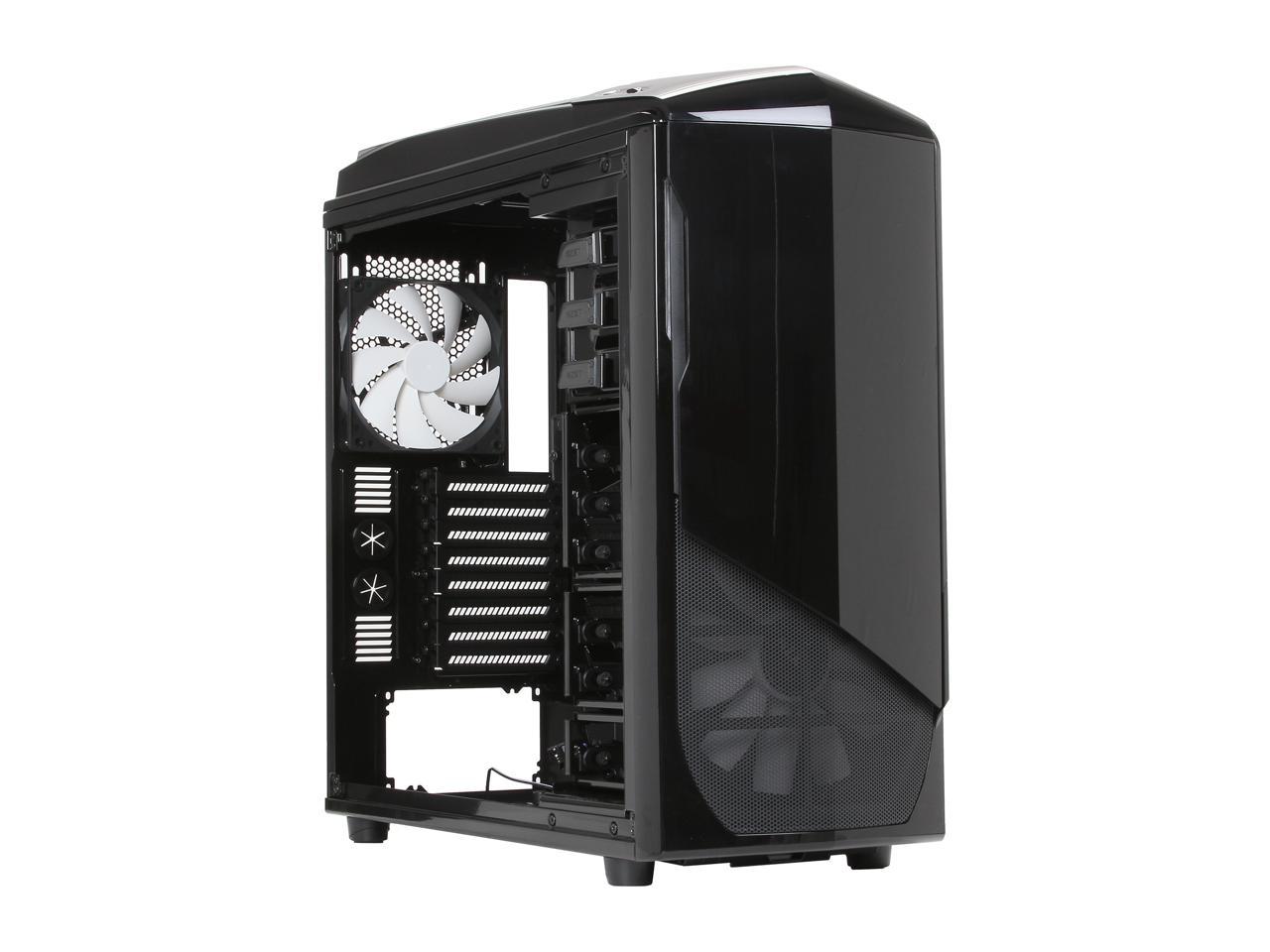 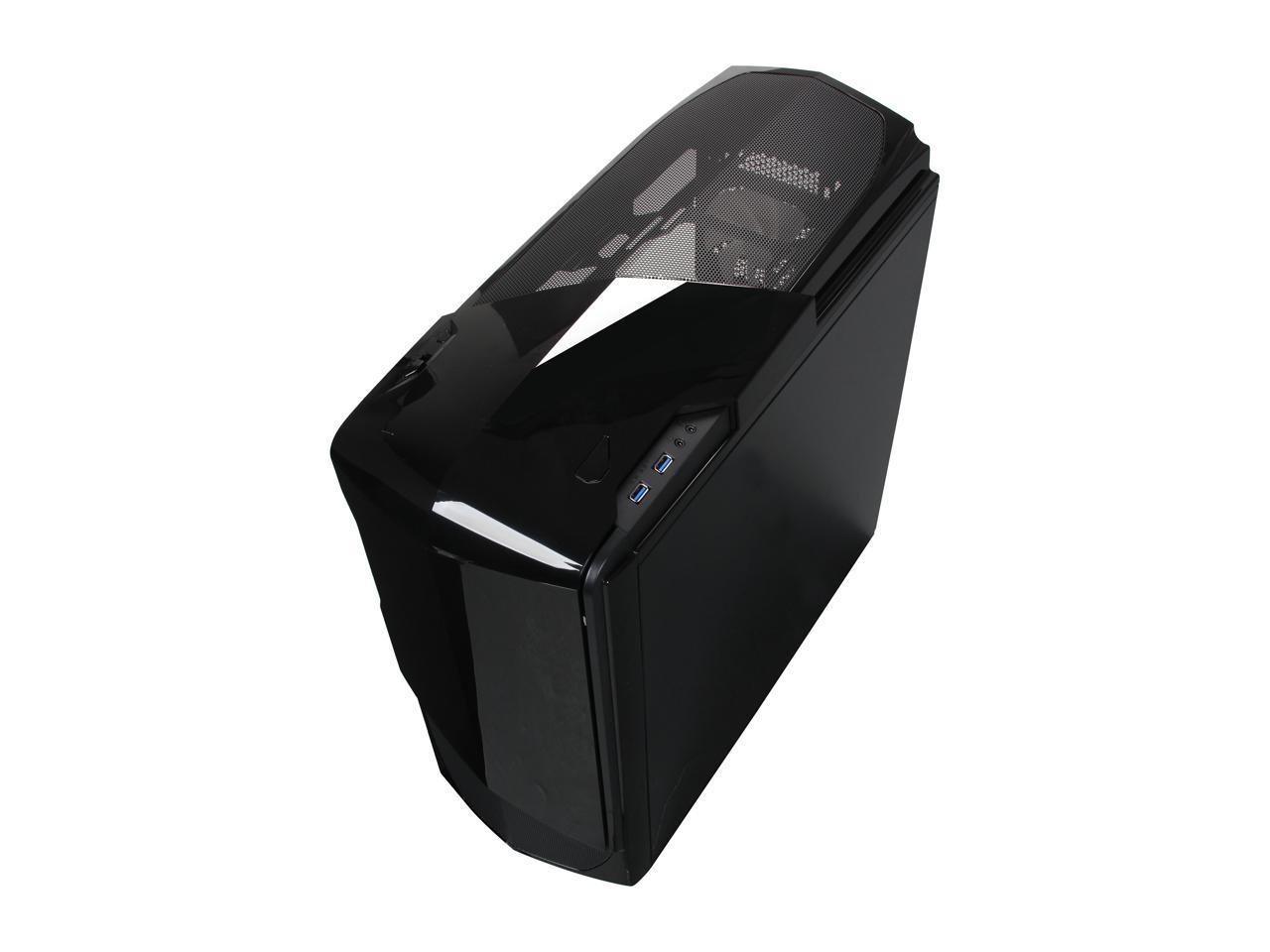 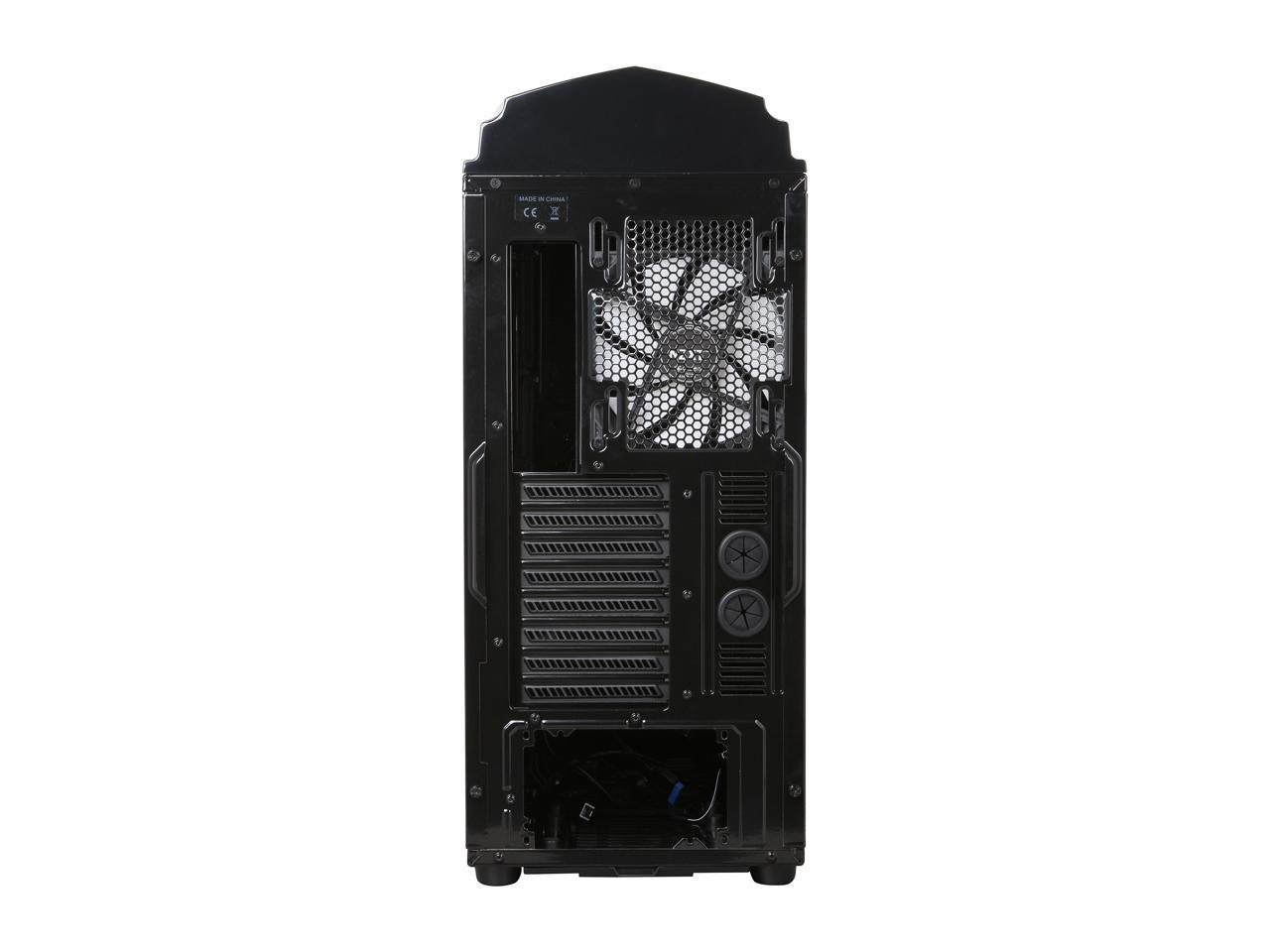 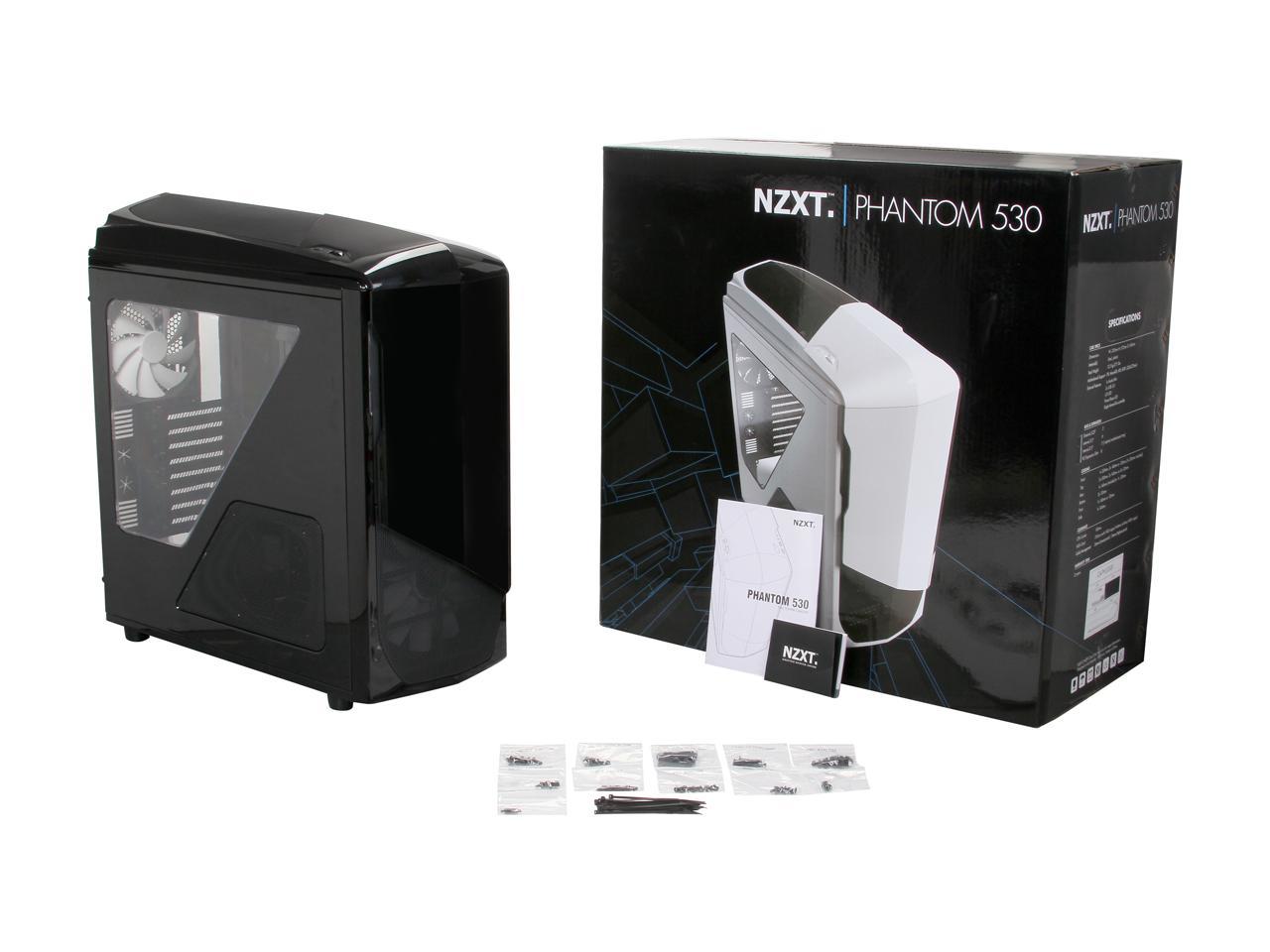 (180) Write a Review
OUT OF STOCK.
Overview
Specs
Reviews In 2010, NZXT introduced the industry to its Phantom chassis, an aggressively designed, feature-filled case for mainstream users, gamers and enthusiasts alike. Now, NZXT is finally ready to unveil its direct successor, the Phantom 530.

Continuing the legacy of the original, the new Phantom was meticulously designed from the ground up for a refreshing new design that is uncompromising in every way. While creating the Phantom 530, the NZXT design team painstakingly took every beloved aspect of the original and made it even better. Now with up to 70% more cable management space than the original, more airflow and even more liquid cooling support, the Phantom 530 features phenomenal support for even the most extreme performance builds. Learn more about the NZXT CA-PH530-B1

Pros: - Full sized case with lots of room - Tons of cable management holes and routing options - A really nice fan controller that supports up to 30ws for a single channel - You can use big fans for a more silent operation while still getting really good airflow - The plastic and the metal uses a pretty nice glossy finish and matches really well - Door on the front is surprisingly solid for being made of plastic - Reset button is behind the front door! so you dont have a chance to hit it accidentally - Stealthy looking I/O - Support for dual 140mm rad in the top, 140mm rad in the back and even side if you wanted, and the bottom comes out for even more water cooling support - Removable dust filters on the bottom for psu and the possible fans - SSD mount in the back of the motherboard tray - Every 3.5inch hdd mounts support a 2.5inch ssd or hdd - Pretty great value considering all you're getting - Has their back I/O lighting which comes in handy

Cons: Plastic! Because of this it has a glossy black finish which i wouldn't have a problem with, but on plastic the glossy finish scratches easy and on metal the glossy finish comes off easily. Screwing in one screw removes all the paint where the head of the screw hits the metal Fan on the window sidepanel doesnt have a built in dust filter. I want to use this as an intake but i can't atm.

Overall Review: be careful as to what fans you use if you're using 200mm fans, most won't fit. They only really have a mounting pattern for their own fans, which is what i bought after buying this. And just be careful when you move this case around because it scratches easily, so i removed an egg for that.

Cons: The only cons was that the front and top red doesnt match the side panels and that I couldnt mount a corsair h100i in the top (Screw holes do not line up).

Overall Review: Other than the 2 cons, Its a gorgeous case with alot of potential. I didnt buy the case from Newegg, Preordered from NZXT.

Manufacturer Response:
Hey Fantom, Thanks for the feedback! If it's not too much trouble, would you mind contacting us via our online Helpdesk through Live Chat? : http://nzxt.com/support/ with the serial number for your case, and photos of the non-matching red finish on the case vs. side panels. We would then be able to forward this issue back to the factory. We apologize for the inconvenience. If you had any other questions, please let us know about those issues as well! We would be happy to assist. Sincerely, NZXT. Staff
Peggy S.
Ownership: 1 week to 1 month
Verified Owner
NZXT Phantom 530 White Full Tower5/18/2015 11:32:37 AM

Pros: Right off the bat, the thing is just gorgeous - the pictures do NOT do this case justice. Case seams are tight and even, even where plastic and metal meet. The injection molded plastic parts of the case facade are perfectly color matched to the extremely high quality paint job, and each piece of the steel case assembly has been individually painted BEFORE being riveted together. Everything in this case screams quality and scrupulous workmanship, with an almost obsessive attention to detail. Customizable is a pretty inadequate term for the level of modification and fine-tuning of an installation that this Phantom lends itself to. Can you fit (Insert Item here) in this case? Bet on it! Could not be more impressed or more satisfied, and very glad I chose this 530 over its larger kin. It cost $114 delivered and looks (and WORKS) like a million bucks. Good show NZXT!

Cons: None, My only regret is that this is the first time I've had the pleasure of building a system with a case this darned good, even after paying much much more in the past.

Pros: -Very Big - Can mount a push pull radiator configuration with no problem -Fan Controller (makes cable management a lot easier) -Pivoted GPU Fan -Air Filters and Lots of FAN Options This was my first time building a computer from start to end and I can say this case was very easy to configure and had a clear manual. The Pros outweigh the cons this case is very configurable because my EVGA Z97 Motherboard was very troubling with its sideways power connectors and usb 3.0 connectors , as it is the mobo took half of the cable management rubbers when I installed it. This case however had no problem fitting all the connections when I removed the hard drive cages so I am very satisfied.

Cons: -only 1 ssd slot in the back other cases carry two or more as a person who has no need for optical drives or hard drives I use that space for water cooling and the extra SSD Slot attachment in the back would've been awesome -window is too sensitive and blurry I always have to be wiping it down with fiber cloth -Could not find any screws that fitted the SSD to the SSD/HardDrive Trays

Overall Review: Needs an awesome lighting system I want this case to illuminate red or blue from all black panels

Pros: Couldn't be happier. I bought mine for about $30 more but with this sale price I am tempted to buy another one in case I want to build another computer for someone. It looks sharp and reminds me of a Starwars Storm Trooper. (I am 60 and was there when the original SW movie hit the movie theaters many years ago so call me nostalgic). No problems everything worked as intended. Lots of room for huge video cards. However I was not able to use the fan holder inside the case as it was in the way due to length of video card however air flow is still great. I had been using the Antec 1200 case but I prefer this for ease of access and weight.

Cons: Not a con per say but if you have trouble getting the top off.. DO NOT US FORCE. Just go from underneath and push the pins together it will come off.

Pros: Plenty of space for almost any components you could think of,Cable routing is very easy in this case,removable hdd cages gives you numerous possible configurations,led light on back panel makes it easy to see when connecting things(wish more cases had this feature) built in fan hub makes it easy to connect all your fans., ample space for water cooling options in future.

Cons: Top bezel on case is VERY tight almost makes you think you are going to break the case pegs when removing it could make the pegs a little better design. I have a NZXT M59 case which this is replacing(no probs just needed to upgrade) so im familiar with the front bezel being tight. Can be a bit disconcerting so go easy at first.

Overall Review: I bought this case because I wanted a case I could live with for a good long while and that had plenty of future expandability. I believe I have found it in this case. Looks awesome,plenty of room for anything you could want to put in it,great cable mgmt, air or water cooling options(and multiple spots to place radiators, not just top or rear mounts) 8 expansion slots so you can crossfire/sli to your hearts content.,dust filters and mesh on all openings so LOTS of airflow. Just got this and hooked everything up NO probs will update if I have any issues but I really dont expect any.

Pros: This is definitely a good looking case, with all the basic necessities! More than enough space,(Duh, Full Tower!) and easy to run cables and wires onto the other side of the panel for that clean look!

Cons: Just like the other review, the color doesn't match up all the way, but it isn't that bad. I feel like the front panel covering your DVD drives and such, is a little TOO cheaply made. When closing the panel it feels like it won't stay closed unless you slammed the bi***!

Overall Review: Overall, a good case. Looks even better in person! Most definitely stands out than your basic cases

Pros: - There is plenty of room inside to work as well as behind the side panel for cable management. - I like that i was able to restack the drive cages to make everything fit the way i want. - The LED's on the back make life easy, no more finding a flashlight to plug something in. - Included fans work well and so does the fan controller. I can actually feel the air moving in the case.

Cons: - Why the fan hub behind the motherboard tray does not have 4 pin connectors on it will forever confuse me. - I was thinking of knocking down the rating to 4/5 because 4 of the motherboard standoffs stripped with very little pressure and one standoff did not have any threads at all (was just a round hole). I had to use some extra ones off my old case.

Overall Review: - Installing everything was very easy in this case. I moved the 140mm fan from the back and put it on the side panel. With the 200mm on the front and the 140mm on the side my hard drives are staying cooler than i thought they would. I've got every fan slot occupied except for one above the dvd drive. I've been looking for a case for quite some time because i got a graphics card that has built in water cooling and i didnt like that it was sticking out the side of my old case (it was too small). - This case works very well for what i need it to do and it does look very nice.