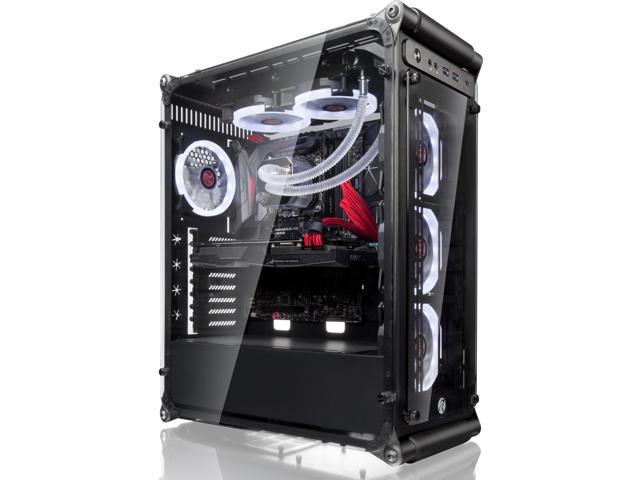 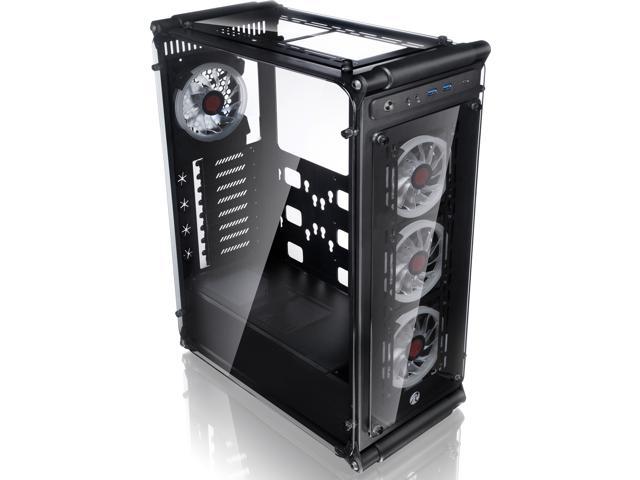 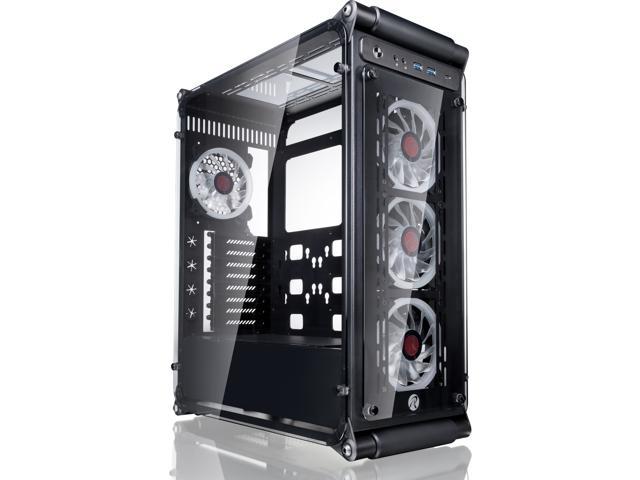 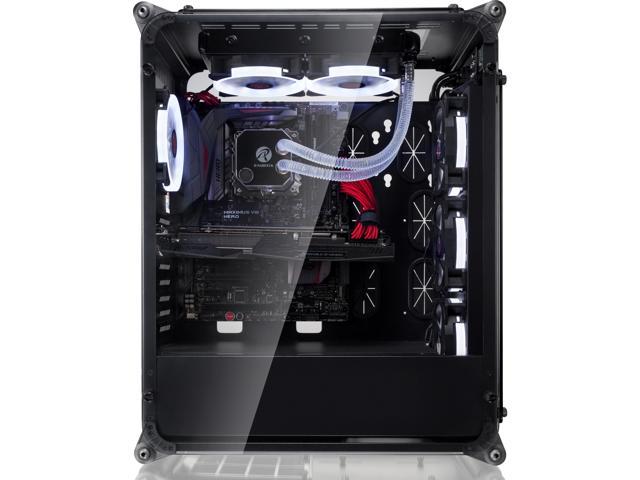 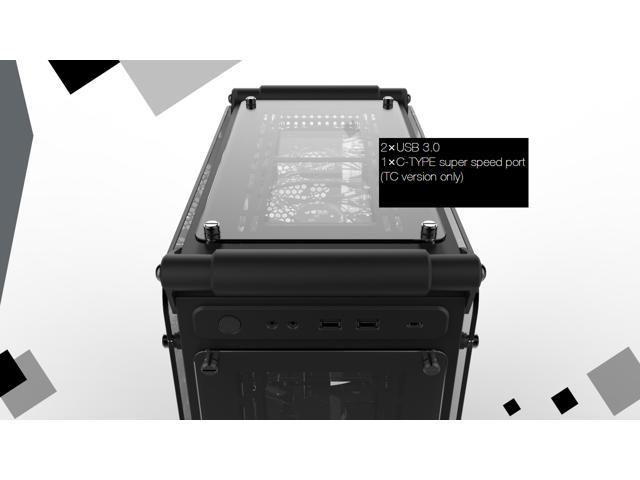 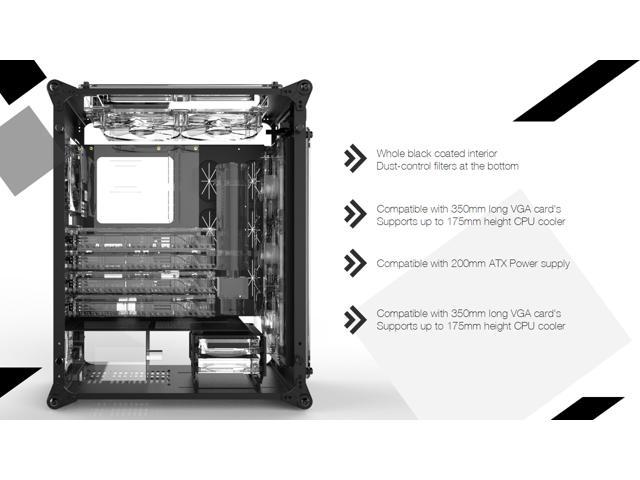 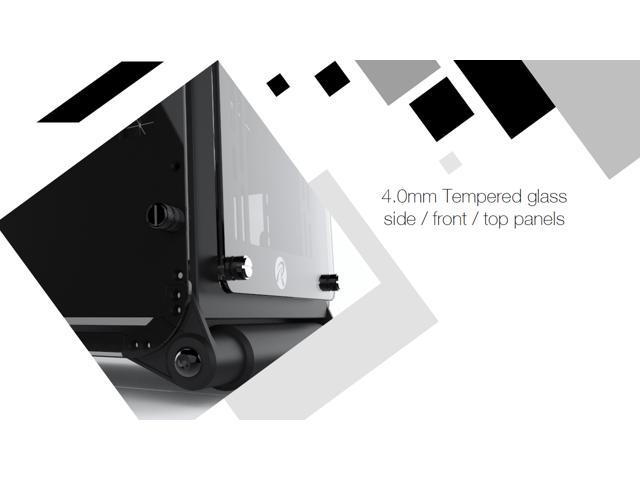 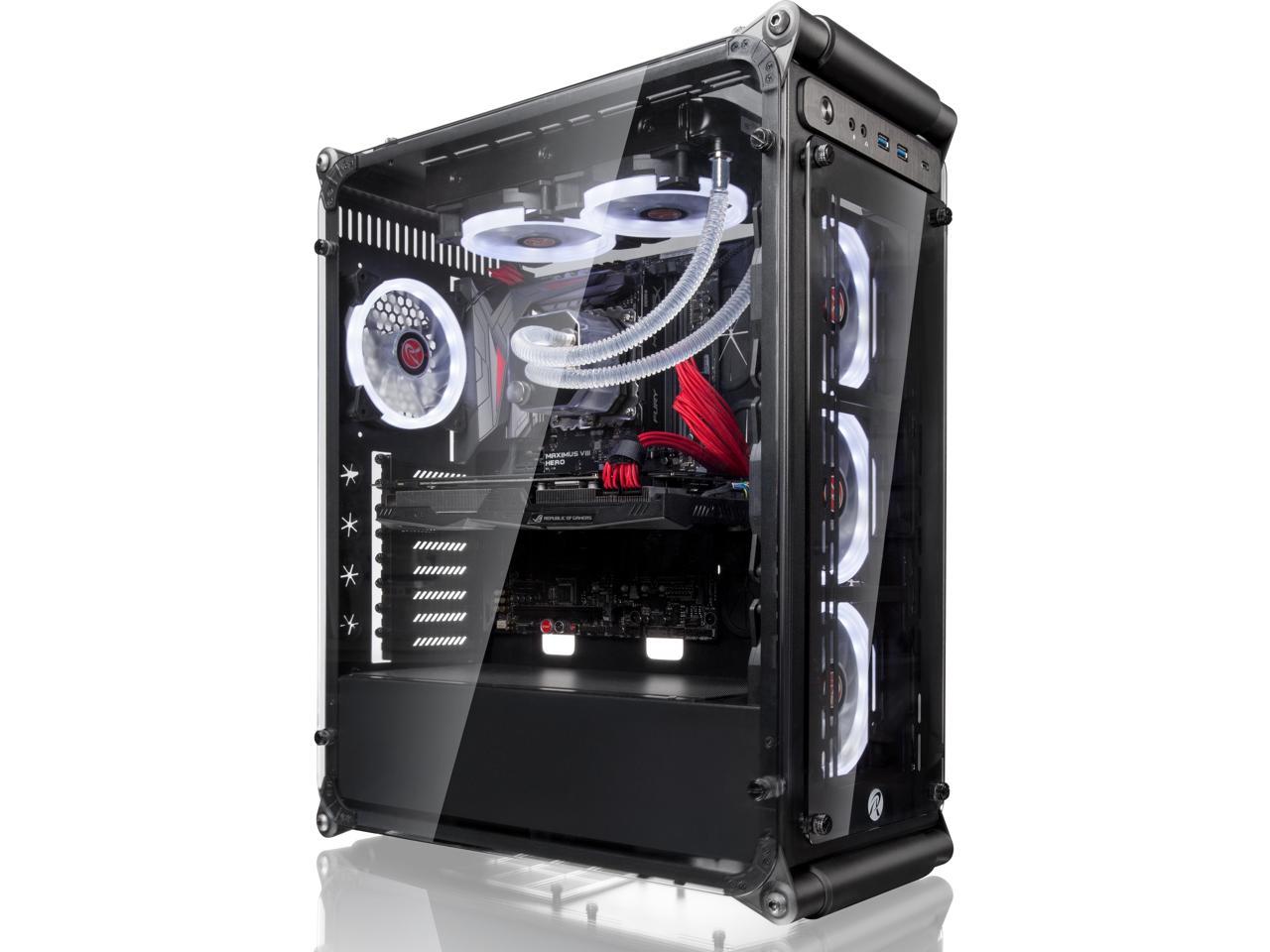 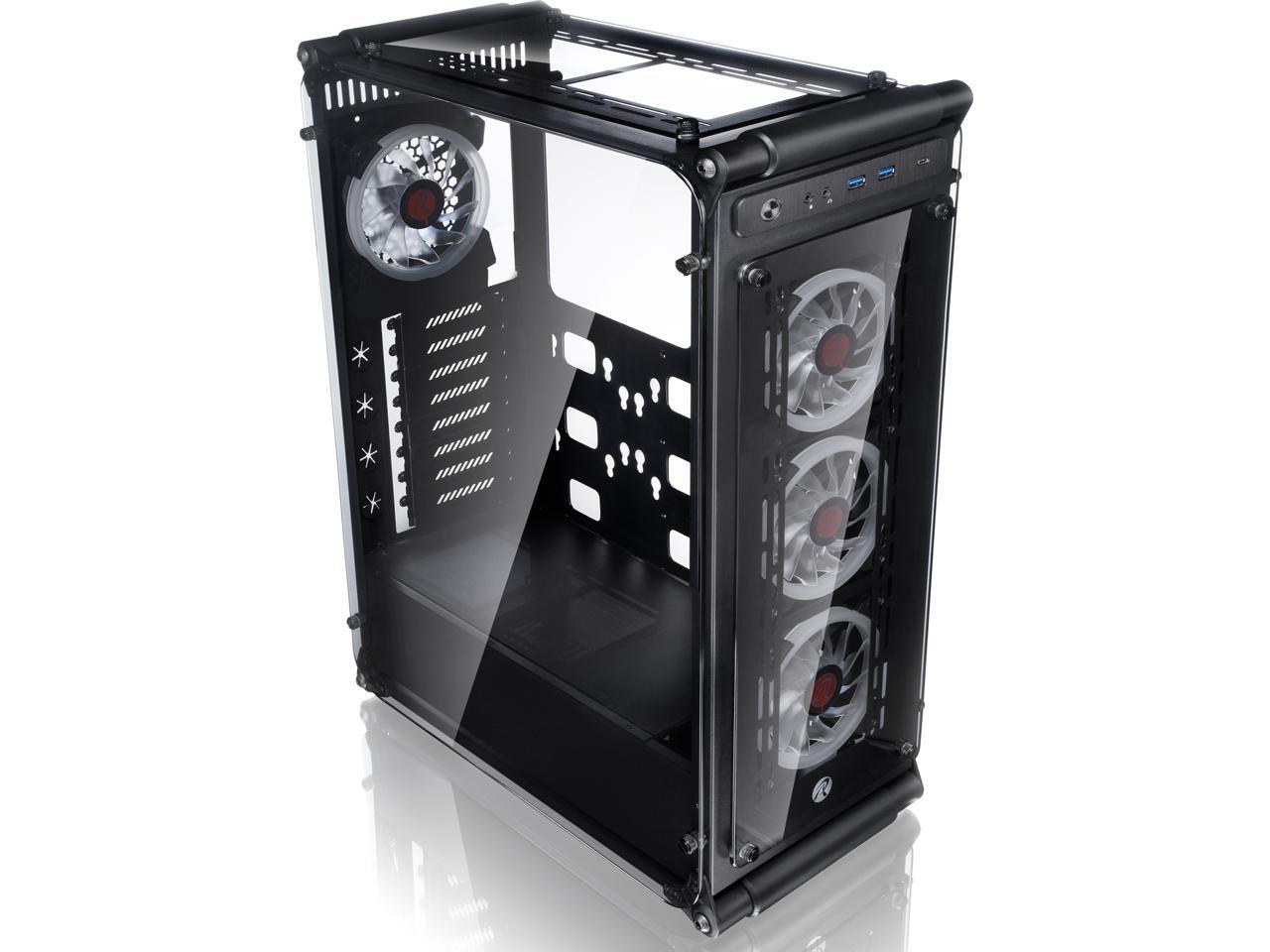 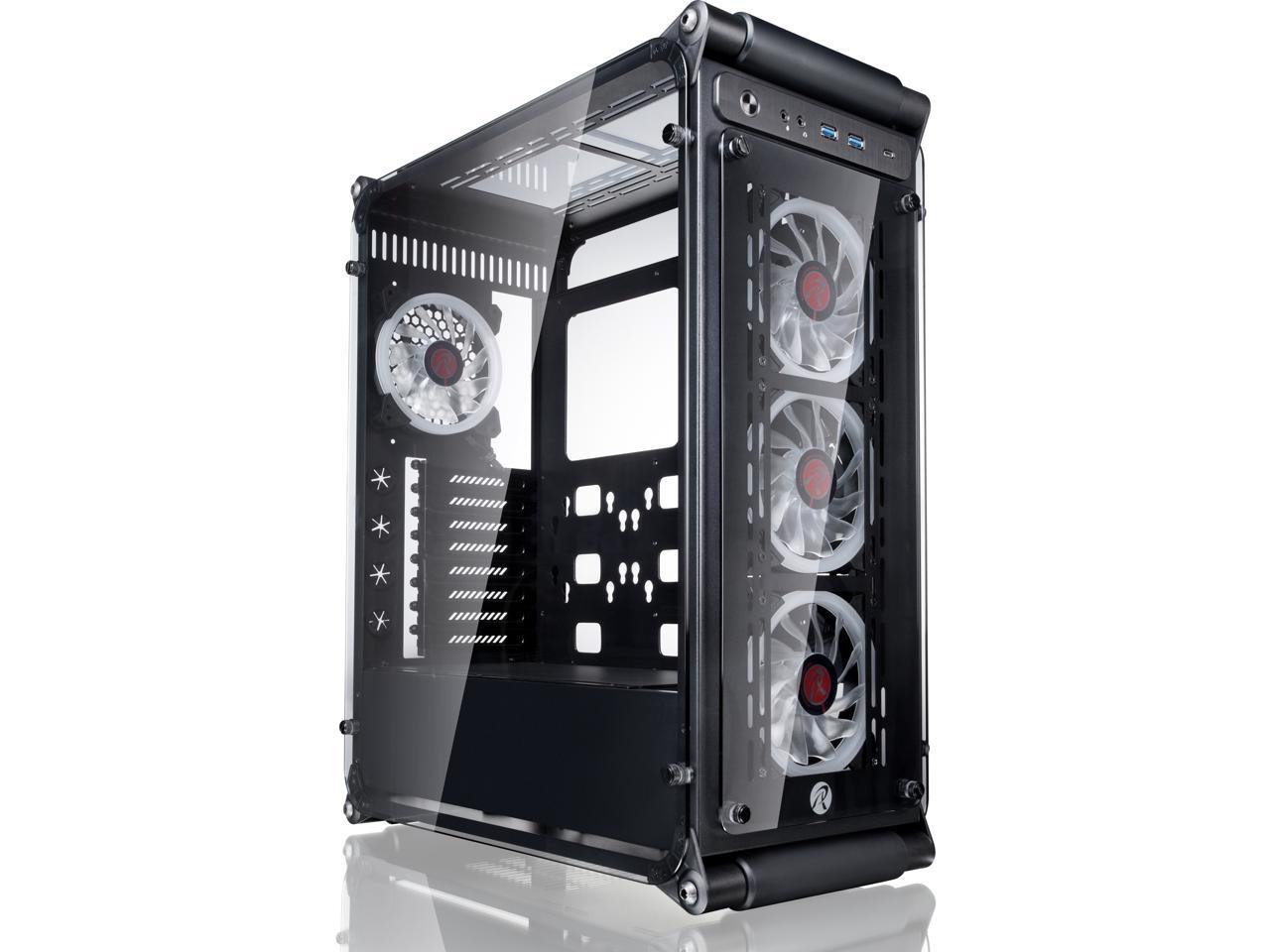 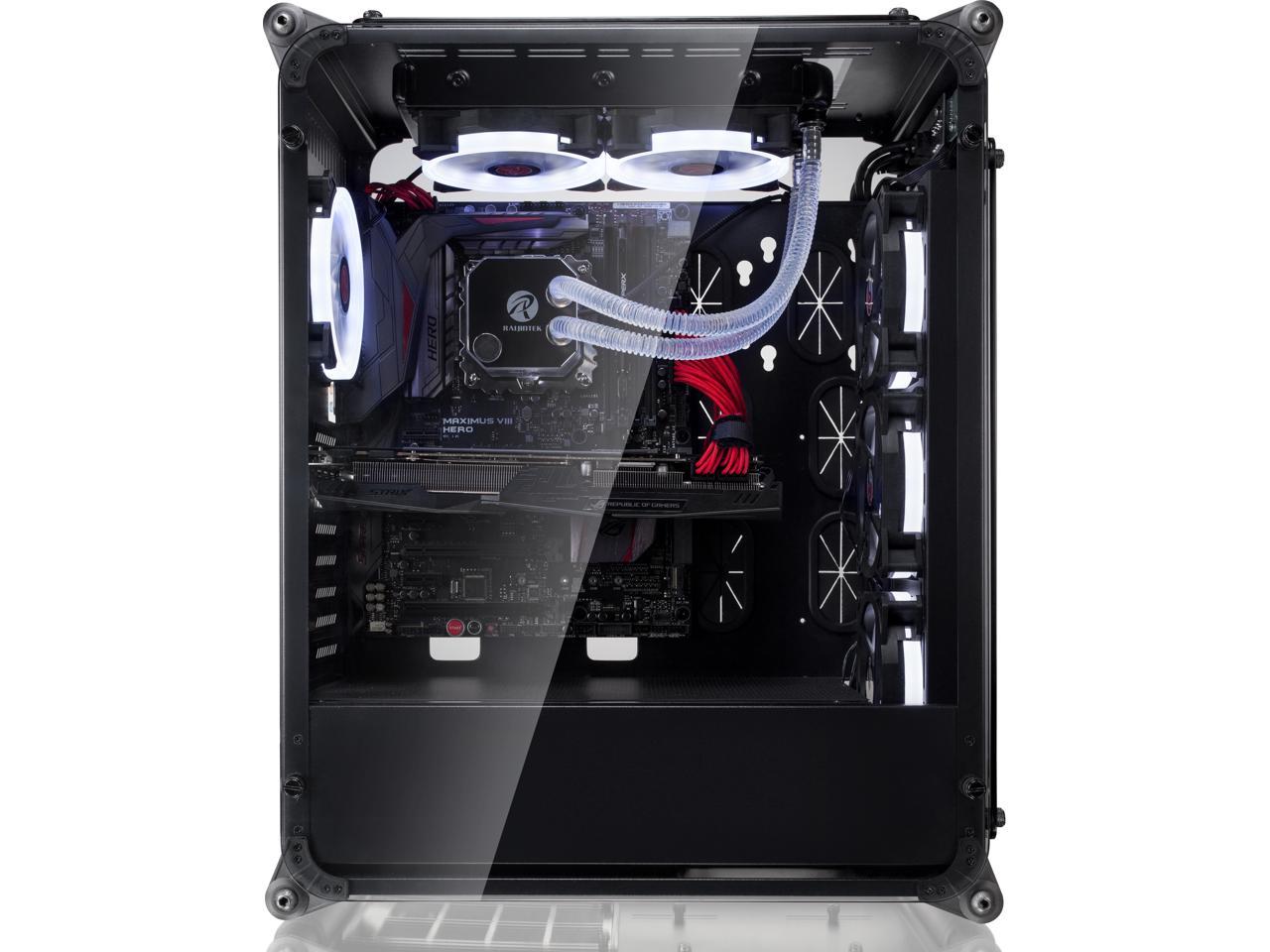 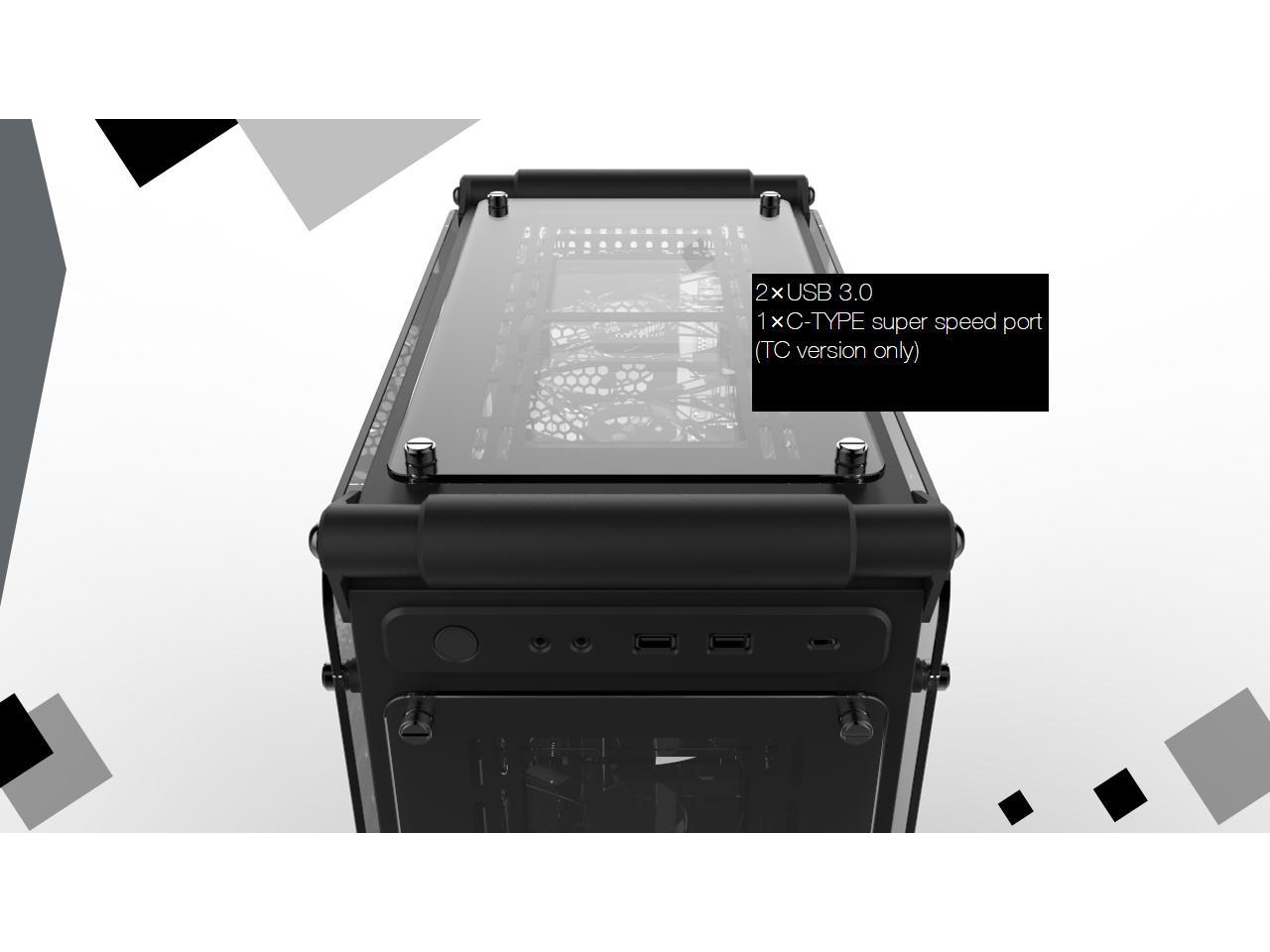 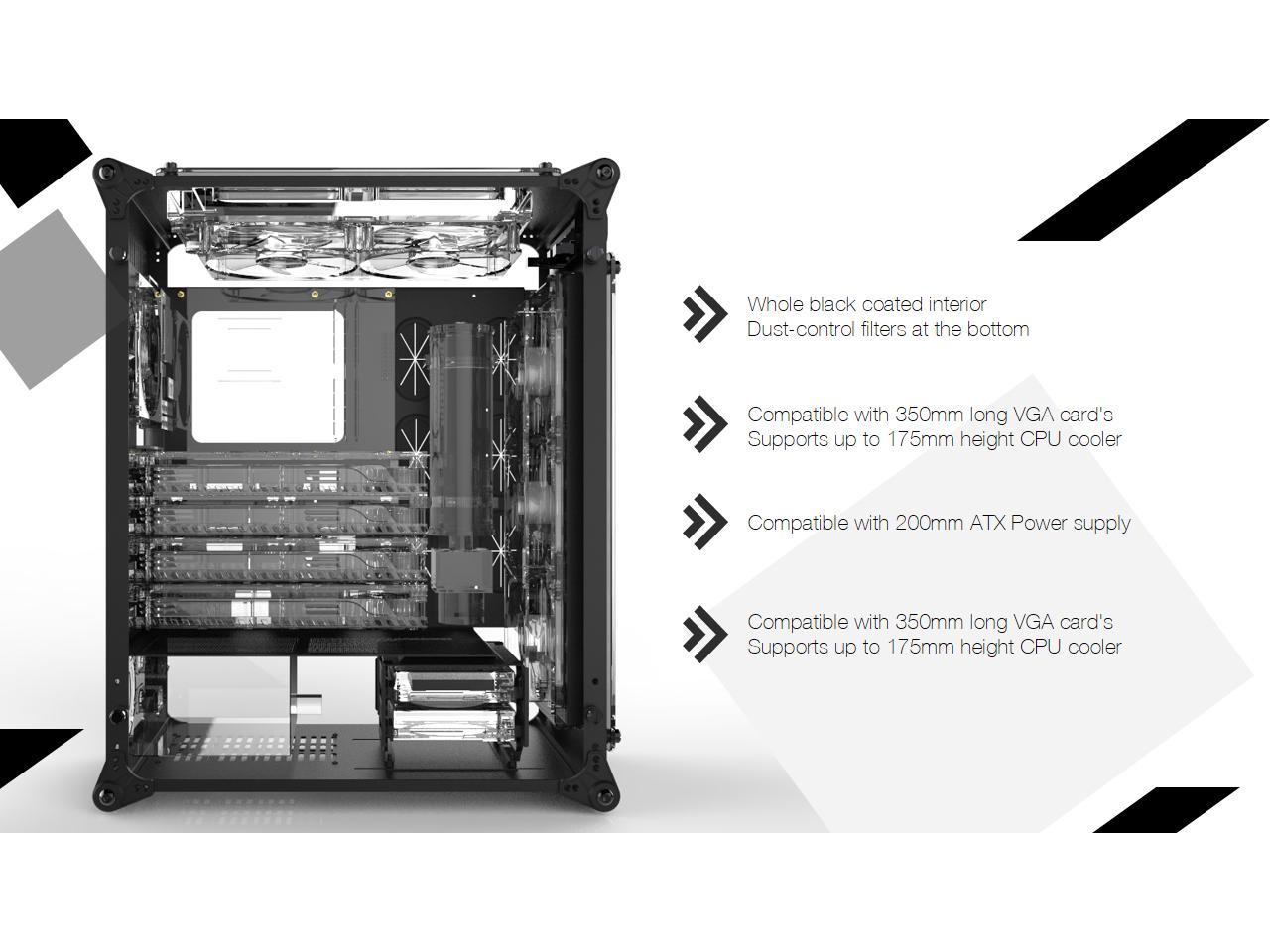 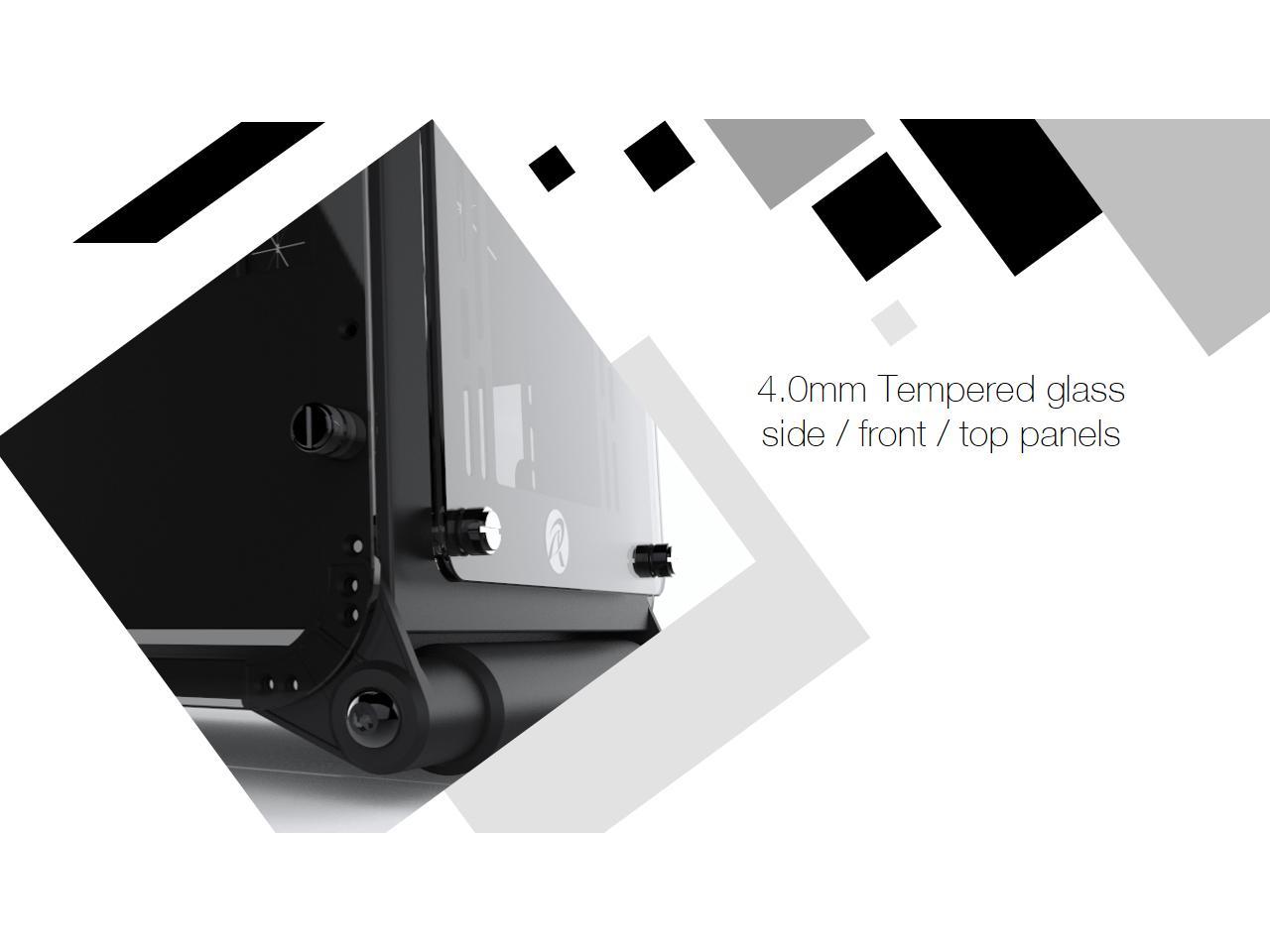 Design Art in its best by RAIJINTEK – New Gaming chassis out of the tempered glass series. COEUS EVO supports up to E-ATX motherboard‘s, a maximum of eight fans including 3*120mm fans optional (3pcs pre-installed, TC version) at the front (240/280/360mm radiator of 60mm thickness), 2*120mm fan optional on the top (240/280mm radiator), and 1*120mm (140mm fan option) pre-installed at rear, and 2*120mm fan optional on the PSU cover. COEUS EVO also provides surprising functions and features. Specially, COEUS EVO is a detachable chassis in any parts and with Unique rubber foots tob e used as handle bars. Additionally, COEUS EVO also Superior features include such supports to install 4* 3.5”HDD or 4*2.5” HDD, Tempered glass side/ front /top panels, tool-free for the easy installation, a max CPU cooler height up to 175mm, a max VGA length up to 350mm and 200mm ATX / EPS PSU compatibility. Cons: Rubber feet don't go all the way across = a little wobbly No spare anything lose a screw and you better look elsewhere Back of pcb for front panel is visible and it's green Front mounting area obscures edge of fans a little No hinged cover for PCI slot area Bottom most cutouts don't have rubber cover

Overall Review: Overall the case truly is beautiful, it has its little hiccups here and there but is a good buy. I did have a strange incident where there were sticky back feet in the PSU area that wouldn't let me install said PSU. I just removed them and was able to install the PSU with no further issues. Also NOWHERE does the case tell you that the back glass has a very dark tint and the front one a light tint. I got them mixed up and you could barely see the RGB inside! Once installed correctly though the back glass does a good job of hiding the rat's nest in the back while maintaining the all glass aesthetics. Lastly the included fan is pretty good but unfortunately didn't fit my build so I put it away. All in All A++++ would buy again!

Pros: The glass is top notch quality EATX motherboard fits just fine Wire management is easy with the extra space behind the motherboard

Cons: Temps run warmer because the glass sit about a 1/2" from the fan vents. I sense a 2 to 4 degree increase in temps Case does not provide a reset button for the motherboard. Just power on and power off

Overall Review: As mentioned by others. When you remove the glass, put the set screws back so you do not lose the critical rubber grommets that the glass sets on. Order a USB 3.0 to USB type C adapter so you can connect the USB type C on the front of the case to a motherboard 3.0 connection.

Pros: What they did right: everything uses normal screws to fit together. I plan on modding this case so that will make it very easy for me. The rubber pass thru grommets are of very good quality. Has type-c front panel (see cons). They used standard pc standoff screws to space the glass panels not some weird thread size.

Cons: What they did wrong: the metal is quite flimsy to be honest, the back panel is bowed right above the I/O shield cutout and will take some training to get back flat. There is no cable management on the back whatsoever and the included cable ties are not the greatest.The included fans do not use standard rgb headers even though they look to be decent quality. The pcb's for the front panel are just exposed inside the case and to be honest the slodering job on the power button pcb is quite flimsy, but my biggest complaint is the front panel type-c; its just a type-c cable, as in its a male type-c connector. Now I have not built a computer since the inclusion of type-c, so I checked a gigabyte and msi motherboard z490 before writing this as I have an asus z390 and they all have the same type of connection for fron panel type-c, and it sure as heck is not a female type-c, meaning I now have to find an adapter.

Overall Review: Overall, they could have done better at this price point but some of my complaints are more nit picking and I'm aware of that and some other complaints do not matter to me anyway for what I plan on doing. As I said I will be modding this case with a dremel to make it suit my needs and everything screwing together is awesome. The use of extra long standoffs with rubber holders may seem cheap to some but really makes it easier to buy some more standoffs and some rubber washers to space out the panels more to give the fans some breathing room and still use the included moutning hardware. And as for the fans, I plan on using corsair fans anyway. Really, the exposed pcb's and the type-c front panel connection are the biggest let downs. Thankfully there are places to have a cover for the pcb's 3d printed as i do not own a printer, but is still a cost I should not have to deal with to get a nice clean look, and thankfully I am comfortable with a soldering iron as the soldier job on the front audio may have to be re-done, it's that flimsy. And really raijintek? You literally just put a female to male type-c cable in there and called it good? This case is new enough that the front panel connector has been established for 2 years plus at this point if my z390 has it. At least for the price include the adapter or something, even if it means less fans... that use a funky rgb connection anyway. This is actually a '3 egg' review. I did this on my phone and it registered as 4 and won't let me change it, but the front panel pcb issue and the type-c connector are worth an egg each if you ask me, especially since the inclusion of the type-c was the deciding factor when deciding on this case. But it looks awesome, the layout is nice and I can make it all work anyway, but to any prospective buyers of this case be aware of those two things and be prepared to use different fans or deal with the funky rgb connection.

Overall Review: This is exactly the case you're looking for if you want a decent custom water-cooling loop in a relatively small form factor. If you're crafty (and use a mini iTX/dTX motherboard) you can fit 3 280mm rads in this m-ATX case. All of the panels are removable with relatively no hassle so if you're looking to mod or powder coat, it couldn't be easier. Raijintek never seems to disappoint.

Pros: Good weight, Tempered glass is solid on 4 sides, not too expensive. Handle-like grab areas at the top and bottom for good gripping for moving the case from one place to another. Very spacious in all regards. PSU shroud to hide the cables, good cable management. Sleek-looking design.

Cons: The included rear fan could be better, it is a molex fan with a switch hanging in the middle of the wire. Recommend to swap it out, but that is a minimal gripe for the price you pay for this case.

Overall Review: I would recommend this case for Mid to High level budget builds. If you want a super low end budget build, look elsewhere, but other than that, this case is amazing, I am truly impressed with this case for the price. They also have a great customer service team, allowed my return of the first one I bought, but bought 2 more and used them in builds, I think these guys are onto something.

Overall Review: Nice glass all around. I ended up buying sync'd RGB fans that really makes it pop. Our stock AMD CPU fan simply spread the heat around, so I installed a 240mm water cooling kit that fit great on top. That dropped the noise and the heat down a ton. The front fan plate is held in with thumb screws that comes out easy, allowing you to add/remove the front fans outside of the case.

Pros: No dents or dings , glass is awesome and not to dark also came with a lot of mounting hardware!

Cons: Two of the fans the lights did not work and I tried to order replacements but they were on restricted quantities and only allowed me to replace the one and I really needed 4 2 for the water cooler and the two replacements and now they are sold out and being someone who likes to match everything this is very frustrating.

Overall Review: I still reccomend this case I love it I would just reccomend purchasing the one without the fans and just adding your own.

Cons: -The standoffs for the glass between the fans are 10mm, the glass is 4mm, that leaves 6mm (less than 1/4 inch) around the front glass and top glass for your fans to breath through. -Listing video is deceiving, it shows a vertical gpu accessory, near as I can tell, it is not available.

Overall Review: -LARGE, its as large as my old Lian-Li full atx case. The benefit of it being micro atx is that there is plenty of room in the top to put a radiator and not be larger than a conventional ATX. (The reason I bought this case, it will get full liquid cooling treatment... a few paychecks from now) -I'm trying to remedy the narrow gap between the glass and the case (front and top) by buying M3 25mm standoffs and 25mm black nylon spacers to stack with the rubber grommets. This should improve the gap between the glass and the case to 21mm (around 13/16 inch). My build is a R9-390 with Ryzen 3 2200g. (wish I could buy a Vega64 for sane price) As a round of PUBG progresses my system heats up, GPU is screaming, CPU is getting toasty, motherboard starts ramping up the case fans. The gap is so narrow for the airflow that the fans cavitate and make a racket... Basically, the fans have to spin way up to try and suck-push air through the case. So much so the fan blades actually 'stall'. -My final verdict: This is a beautiful case. Don't use high wattage hardware, even liquid cooled and expect good results, without either removing the glass or modding it to have a much wider gap.

7 out of 9 people found this review helpful. Did you?