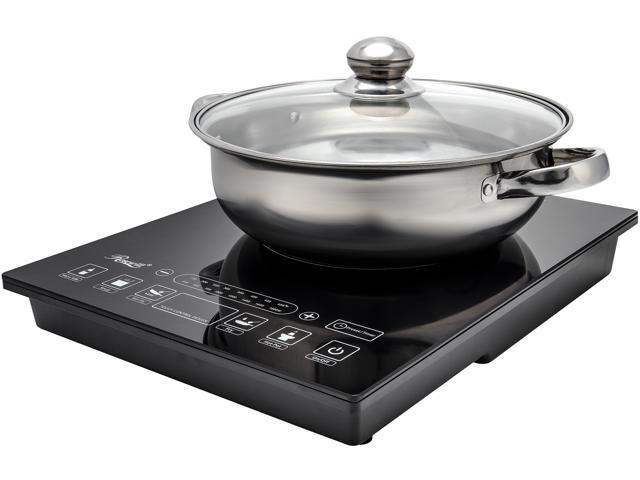 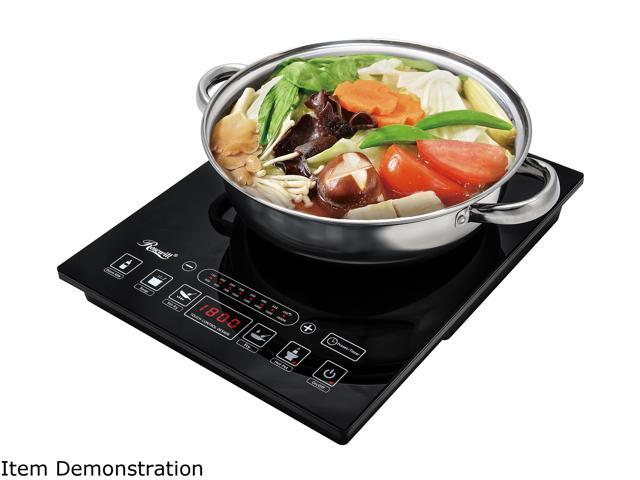 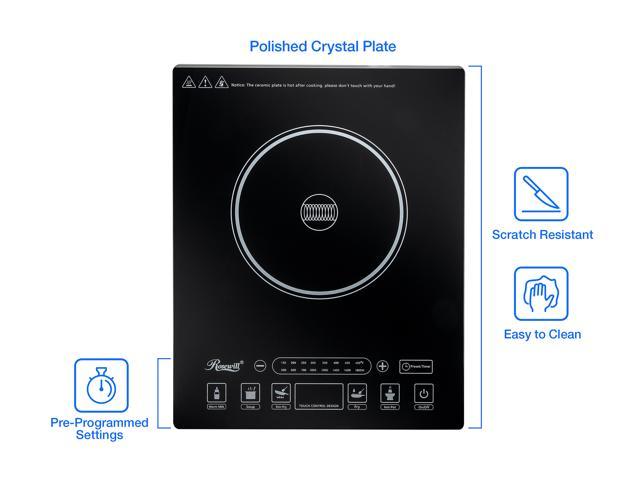 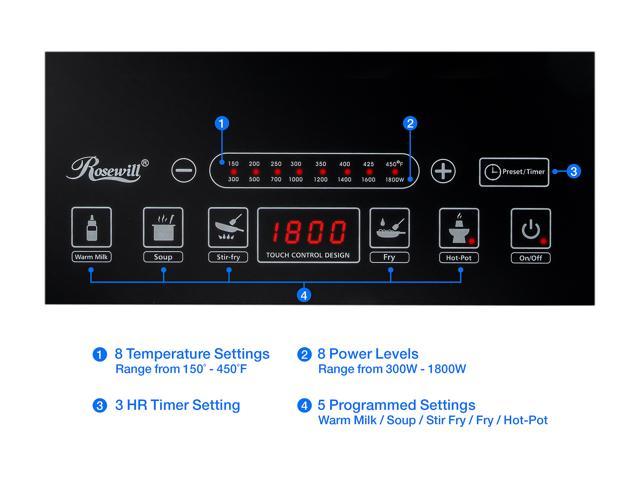 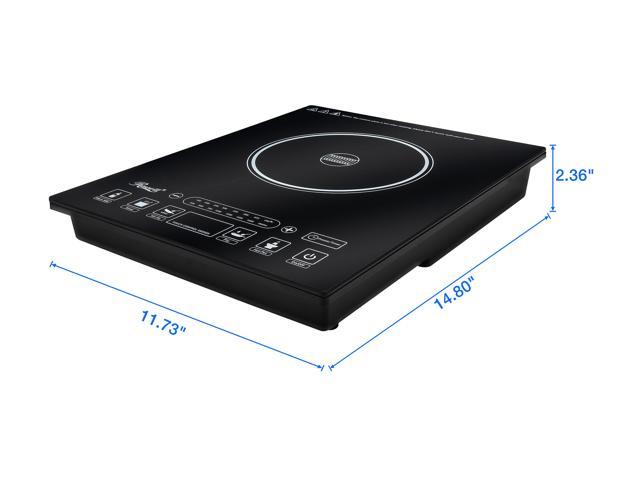 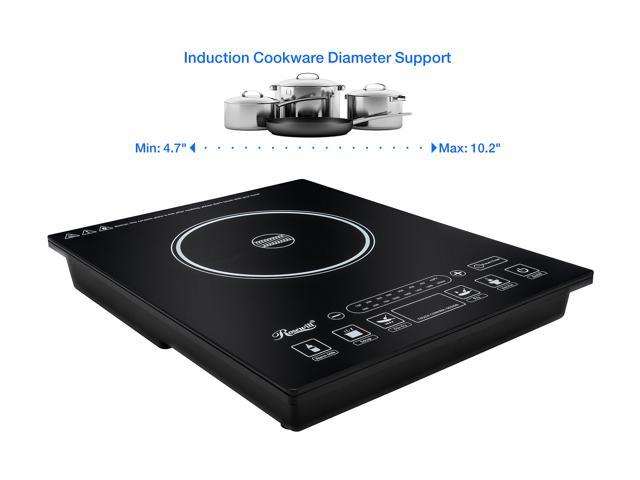 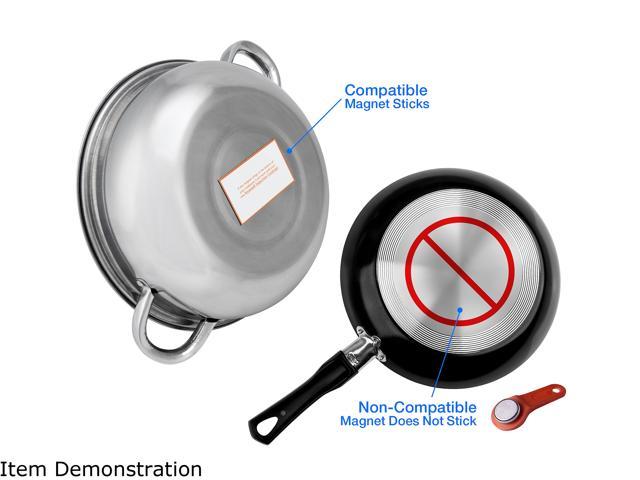 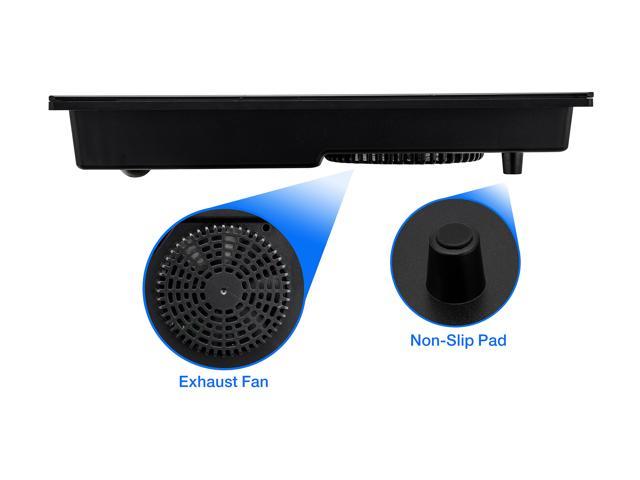 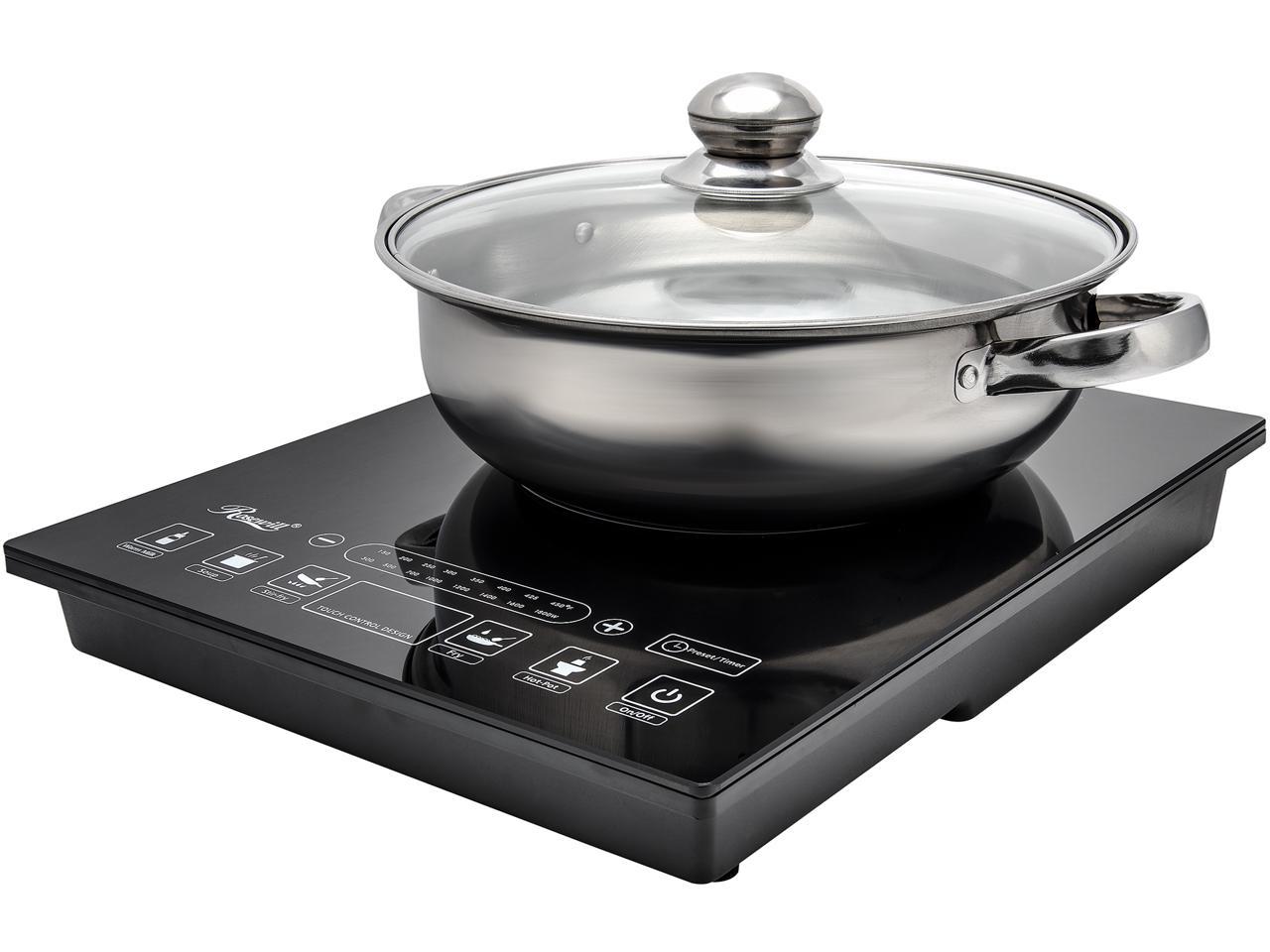 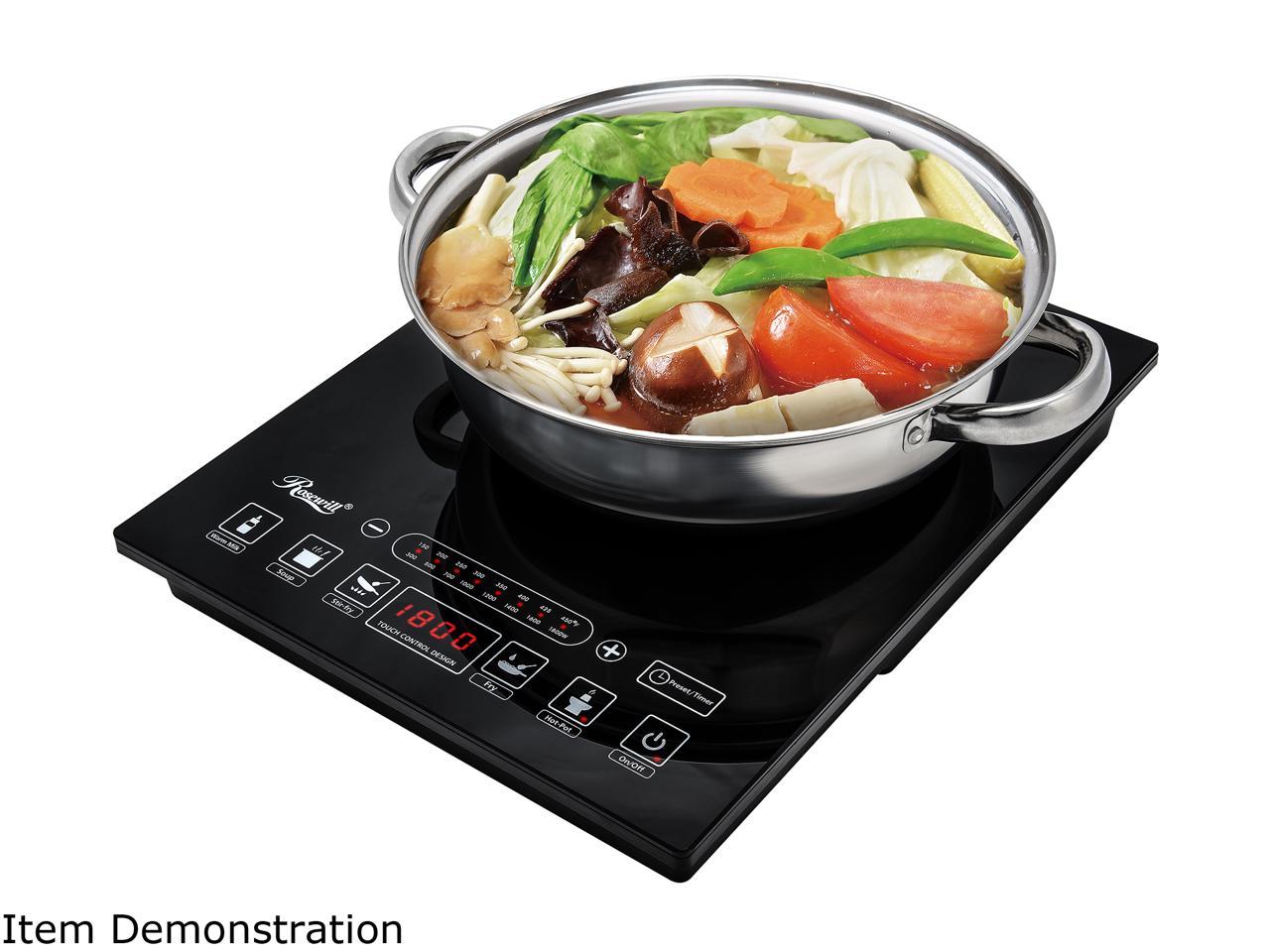 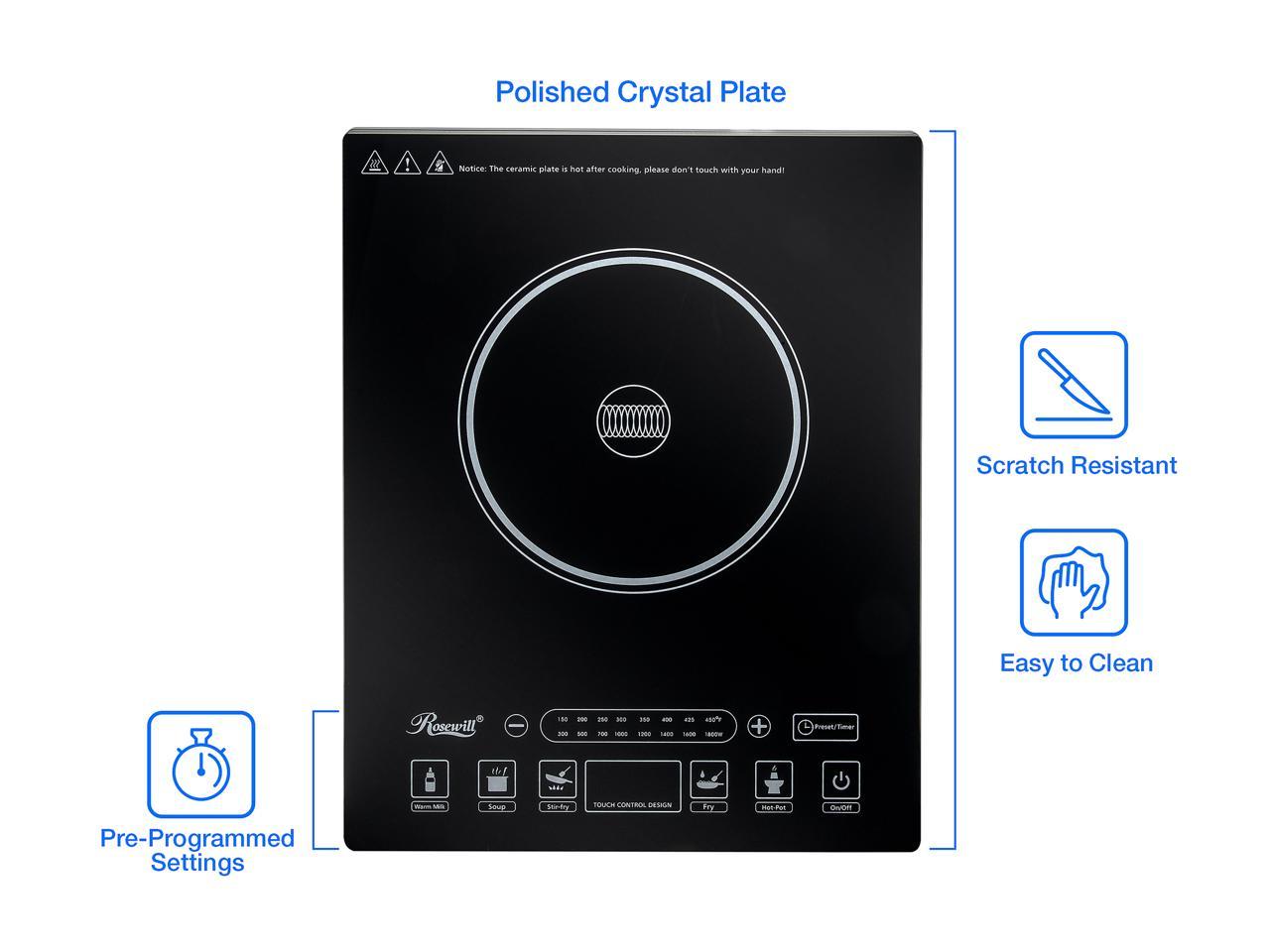 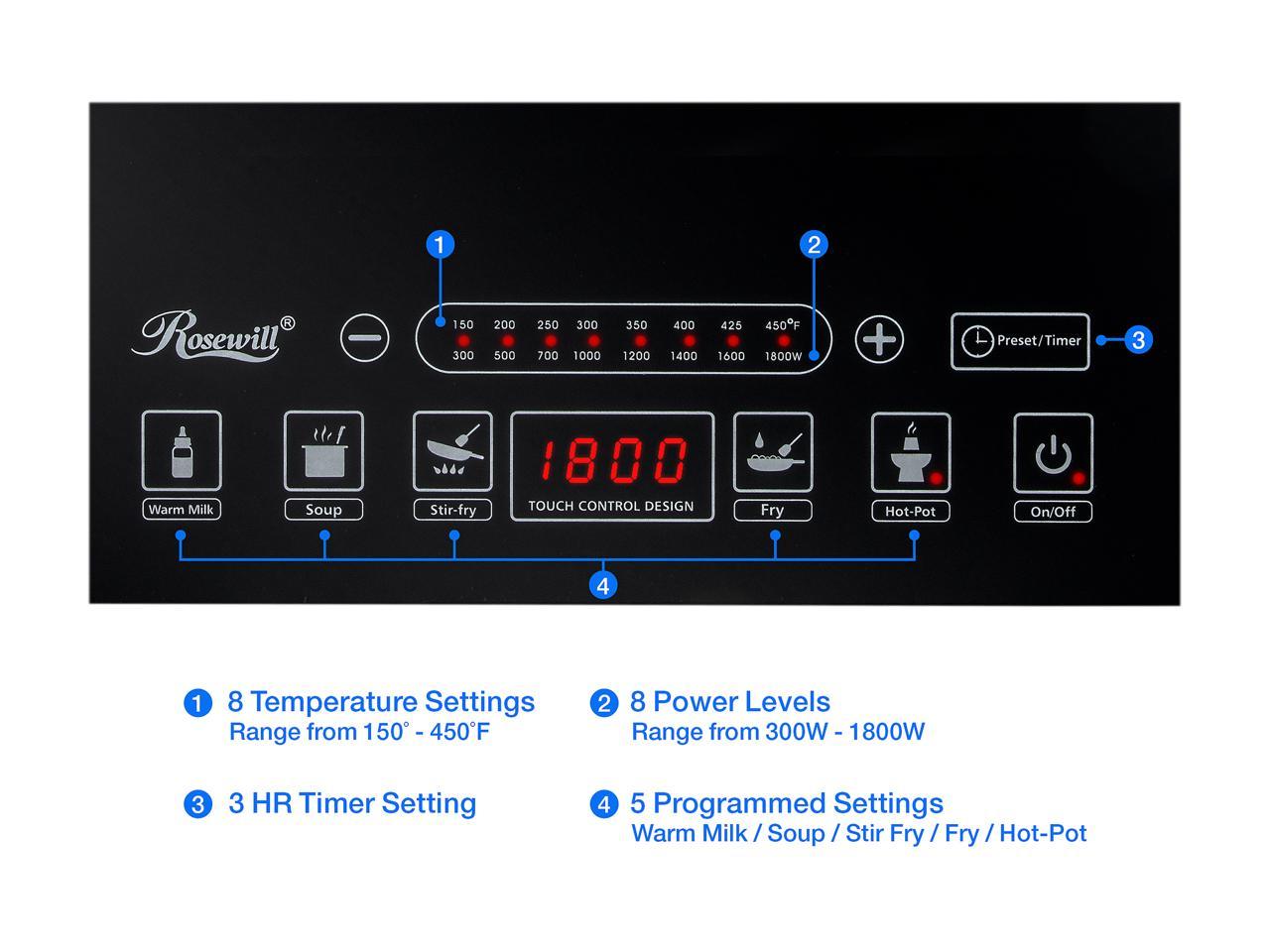 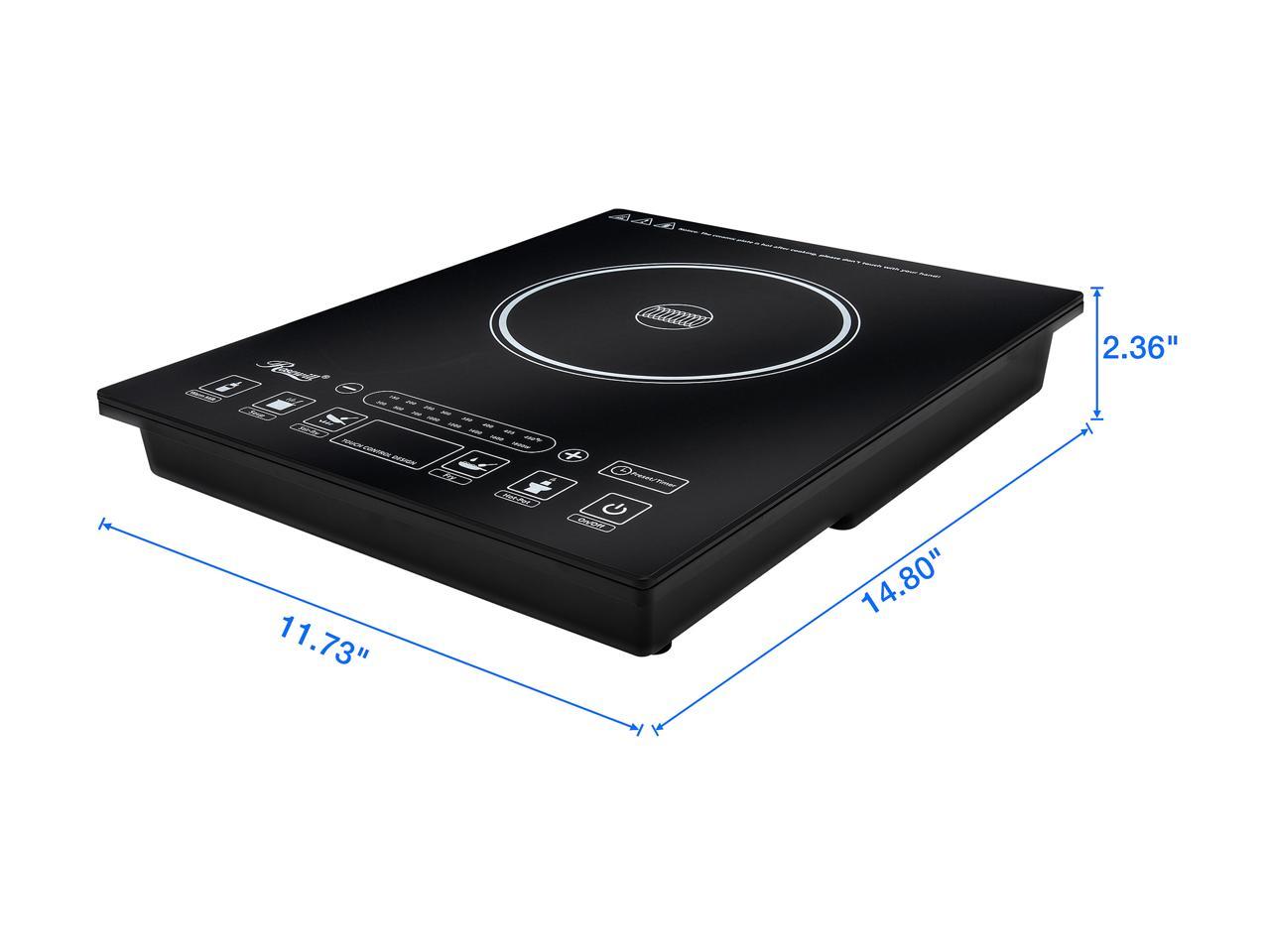 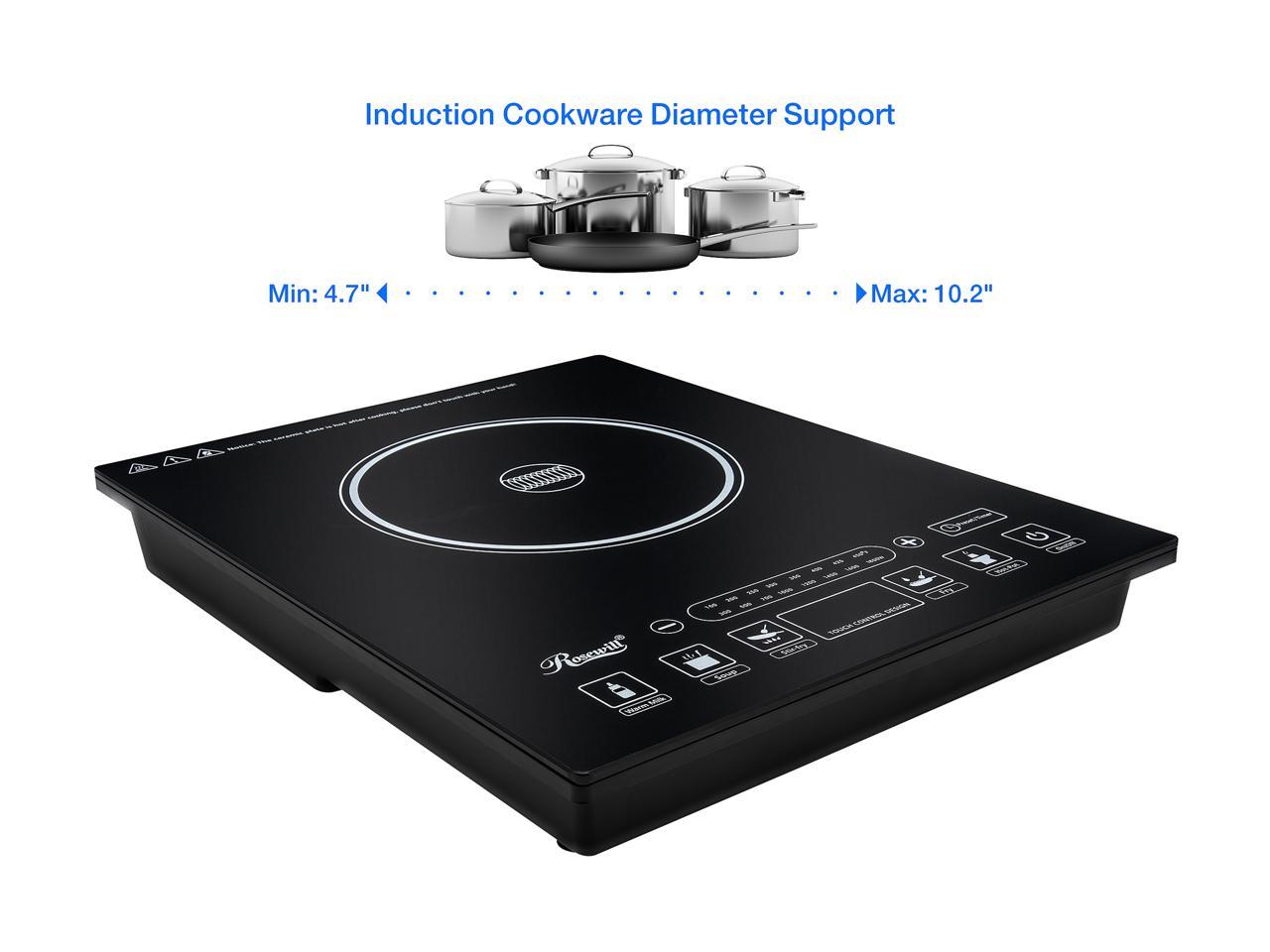 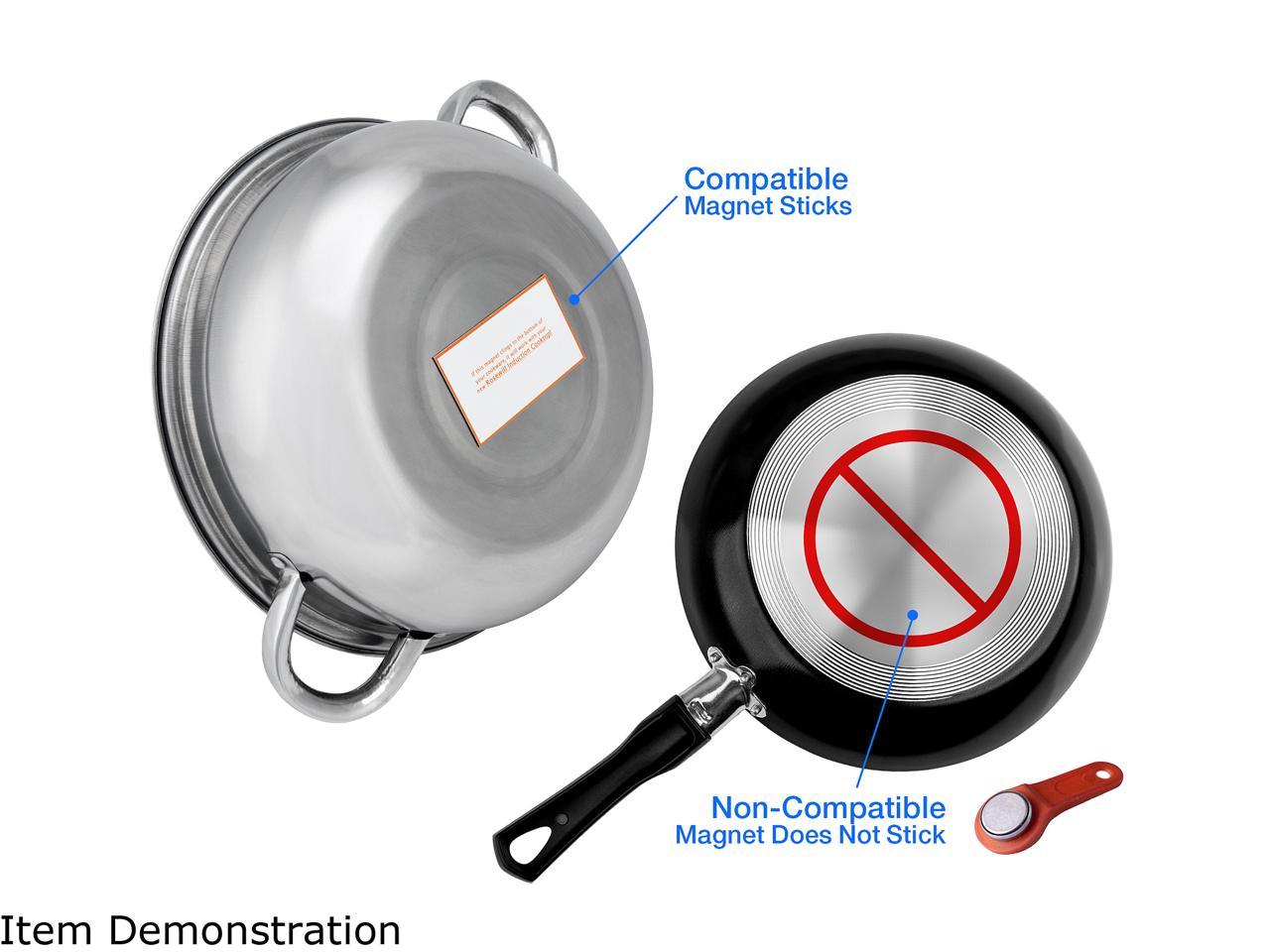 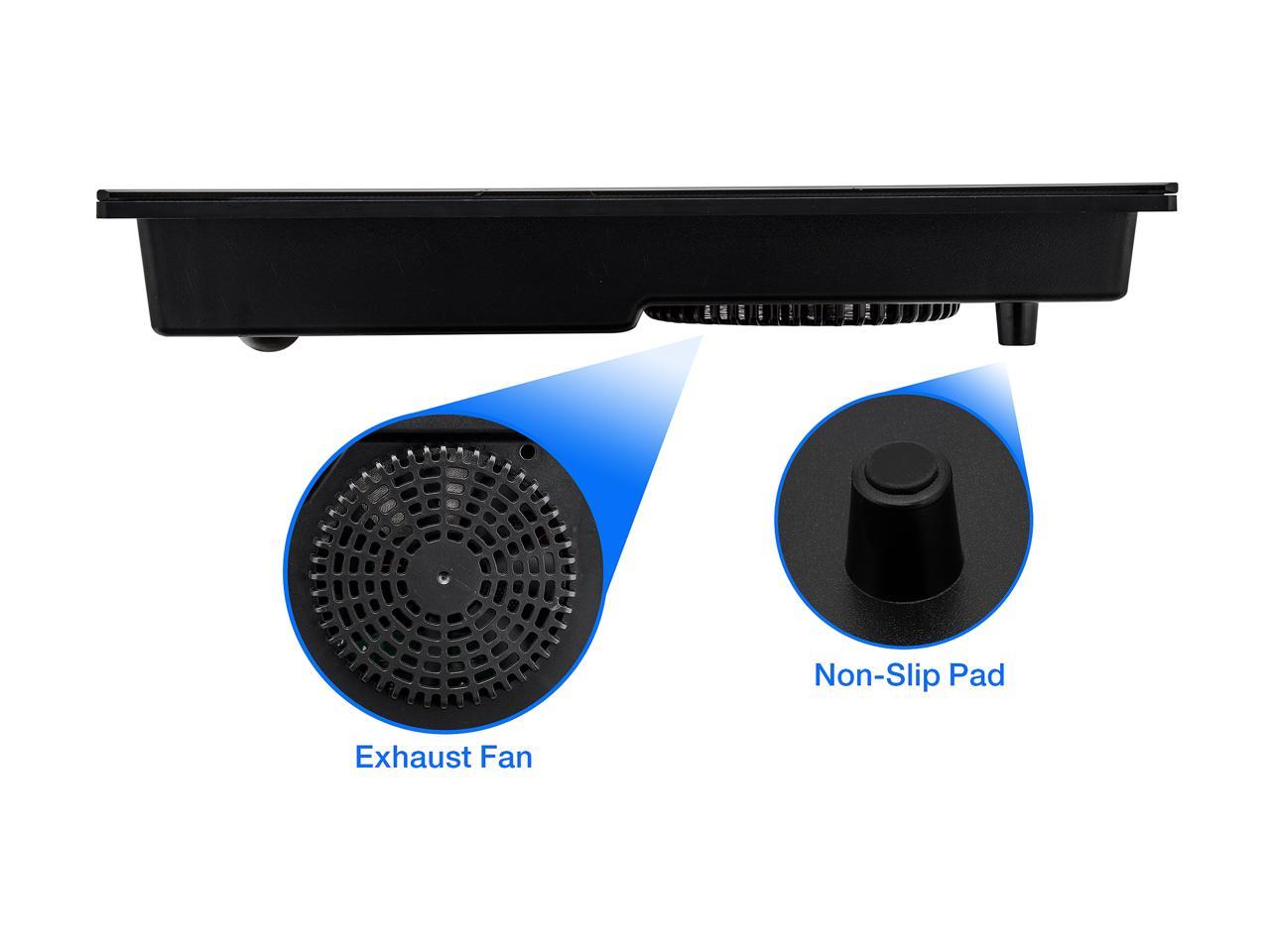 Induction cooking is energy efficient, heats quickly and the cooktop stays cool to reduce the risk
of burns and injury. Heat is not wasted, compared to traditional gas cooktops. An intuitive and straightforward control panel allows you to quickly and easily operate the induction cooker. If the included magnetic strip sticks to the bottom of cookware, it is induction compatible and ready to use with the polished crystal plate. Pros: --So far (after a week's use), the cooker works reliably well, which should be a given, but other brands or models of induction cookers have had significant reliability issues. --The hard ceramic surface is very easy to clean, and it doesn't scratch, even with a cast iron frying pan on it. Cleanup of greasy spatters is simple, using a blue Scotchbrite sponge and detergent. --The touch-panel controls add to long-term reliability and ease of cleaning, by eliminating any crevices or mechanical switches that would allow food residue to penetrate and damage the controls. --Precision control and fast response make it ideal for searing meats or other foods, then quickly reducing the temperature.

Cons: --As most others have mentioned, the included pot is flimsy, but, for the price of the cooker, I didn't expect a high-end pot. I actually left it in the box and used my own cookware.

Overall Review: --I wouldn't rely on the temperature settings, since the true temperature may depend on the type of cookware being used. For example using it with a Lodge cast iron skillet, the skillet gets incredibly hot, very fast, due to the pure iron content reacting so strongly to induction. A low-mass, steel alloy pot would be less efficient at the same setting. --It's critical to carefully watch the food cook, and immediately turn down the power if it starts to smoke or overheat; again, this is a very powerful induction coil, and it can heat the cooking utensil to smoking, burning temperature in seconds. --I already have a perfectly good gas cooktop, but I bought this as something I can also use to keep hot foods hot at the table, for parties, or outdoors for a BBQ. For the great price on sale, it's a no-brainer purchase.

Pros: One of the handiest kitchen gadgets I've purchased in a long time. The touch buttons are wonderful and the glass top pretty exquisite for the price. The whole thing has a nice, expensive look to it. Wide range of heat settings for different types / speeds of cooking. Easy to use, easy to clean. Glass doesn't get hot except for at and very near where the pan is touching.

Cons: The base feels a bit too cheap a plastic, but that's splitting hairs-- otherwise the unit has decent heft to it. The included pan is only adequate. The manual is next to useless and doesn't even begin to describe the different cooking modes and how they differ from each other. It just simply lists the temp/power settings that you can use for each one. It would be nice to know the difference between fry and stir fry, or hot pot, and how or if the machine behaves differently under each setting-- all it tells you is you can use 300, 500, 700, 1000, 1200, etc. watts. Not very helpful because if you're cooking something not in a predefined setting (like boiling water?) which is the appropriate setting? You'll never know and just have to pick one and try it, as there is no generic cook setting. The only ones to choose from are: warm milk, fry, stir fry, hot pot, and soup.

Overall Review: For anyone like me who has always been envious of people that have gas ranges (that actually turn OFF when you switch them off, instead of taking 10 minutes), this will be a priceless addition to your kitchen. I hate electric stoves with a strong passion, but sadly I've never had gas service in the kitchen in any home I've lived in. It's made cooking a lot easier-- see an pan starting to boil over? Just turn power down (or off) and like magic it stops or slows boiling immediately without having to take the pan off burner like an electric stove. The included pan is cheap and thin, which was expected. If you already have nice set of cookware, you probably won't like it For me, it's a unique size (large and shallow) which I find quite useful for some types of cooking; makes a decent addition to my other pans. It's certainly not so thin or flimsy that you can't use it, but will remind you of cheap $10 department-store cookware. I was surprised to find that most of my existing pans work fine with it- The magnet trick works, doesn't have to have a strong attraction to a magnet, even just a little and they'll work fine. Cooking on it takes a bit of getting used to-- My wife likes to multitask, so she's ruined some eggs and other foods by turning it up to a setting blindly and assuming it's the right one, then getting sidetracked with something else. It will cook and get hot FAST, much faster than you're used to with an electric stove, so some extra attention is necessary until you get used to it. This is especially the case if you're using thin cookware, like the included pan. It is sensitive, setting it at 1200 watts versus 1000 could be the difference between a pan of burnt black stuff and something edible. Some trial and error and paying attention should make this a non-issue. As some have mentioned, the 300 and 500 watt settings just vary the duty cycle. In other words it's a higher (presumably 700 watt) setting that gets turned on and off, much like a microwave does when you turn the power down. I suspect if you're using a very thin pan and cooking something that doesn't have any fat/oil/water content it could have the potential to burn stuff easier. So far, I've been able to simmer and cook things down at low heat just fine without any problem. Unit has some fan noise, but it's not obnoxious at all. All things considered, it's a huge improvement over my electric stove albeit with some quirks and a bit of a learning curve. Once I started using it, I haven't touched my kitchen stove, good riddance! I like it so much I purchased another one. Keep in mind that if you get more than one, you'll need to make sure they are each plugged in to a different circuit, which may mean plugging them into outlets on opposite sides of the kitchen. They draw too much power to both be used on same outlet or circuit without tripping breakers, unless you're using them both at a low power setting. As some have reported early failures (within a year), I purchased the extended warranty/protection plan for a minimal cost. Very impressed with this item, moreso if it holds up and lasts a few years.

Pros: - Heats up incredibly quickly - Quiet - Just does what it's supposed to, no more, no less. - Really good value for the money

Cons: Pretty much nothing to complain about. It's heat without fire, and for cheap.

Overall Review: Thumbs up, A++, would boil water with again.

Cons: -Internal cooling fan can be a bit annoying in quieter kitchen environments. It is the tonal quality of the fan that is peaky and annoying, not the absolute loudness.

Overall Review: -Excellent choice for any kind of stir-fry, soup, hotpots and boiling a large quantity of water, since it saves substantial time.

Pros: This is my first induction cooktop, and I've been very pleased with it. It heats things up quickly, the settings seem flexible enough, it's easy to clean, and there's no wire coils for suicidal foodbits to leap into and burn. I like the warning that sounds if I pull the pan off. It's very easy to clean, too.

Cons: * The fan can be a little noisy, but not unduly so. * The included pan is really cheap and lightweight. Pretty much, I found it to be an introduction on "How To Burn Everything!" Using heavier pans seems to have solved that problem. It's not worth knocking an egg for, though.

Overall Review: I'd recommend it.

Pros: Seriously, if you're thinking of upgrading your old regular burner, get this. It's fantastic. - Boils water in minutes. - Able to be nested in a counter top - Immediate heat - Awesome look and great design - Safety feature goes back to your previous setting rather than just turning the machine off.

Cons: - None, it's perfect. Rosewill, you've come a long way. I like where you're going.

Overall Review: If it's still on sale for under 100$, just get it, you will not regret it.

Overall Review: This cooker is used frequently at my home as we are only 2 persons and do not need to cook for a family any more. No problems to report after at least 1 month of regular use.

Pros: good build quality, easy to clean, good value pan that comes with it is basically a shinny flower pot

Cons: cannot rely on settings, always depends on the pan's build, mass, temperatures at start and amount of food, etc You need to experiment on specific pots and it helps if they are designed for induction. pan that comes with it is basically a shinny flower pot