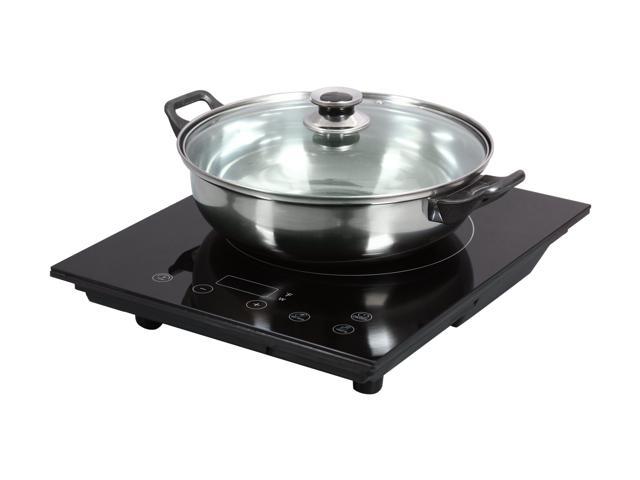 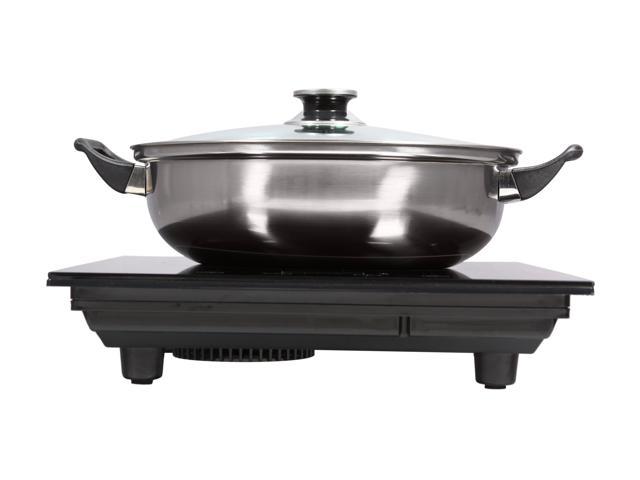 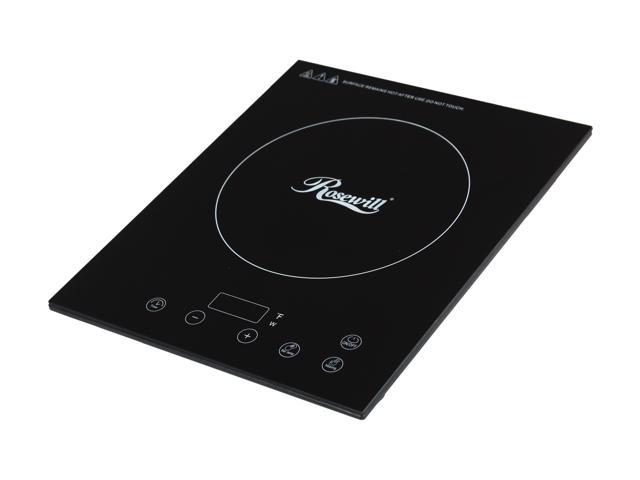 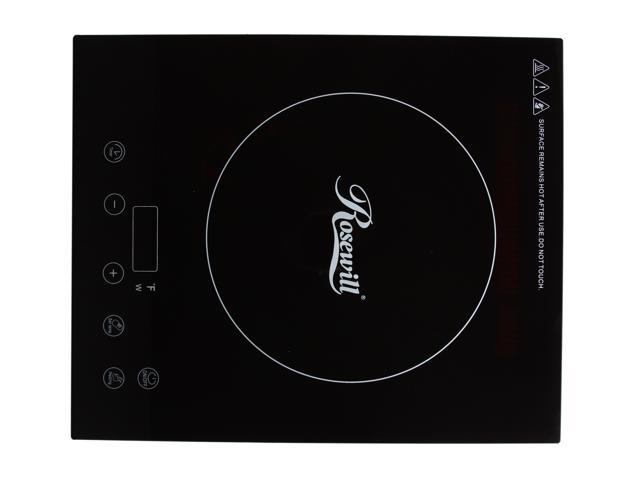 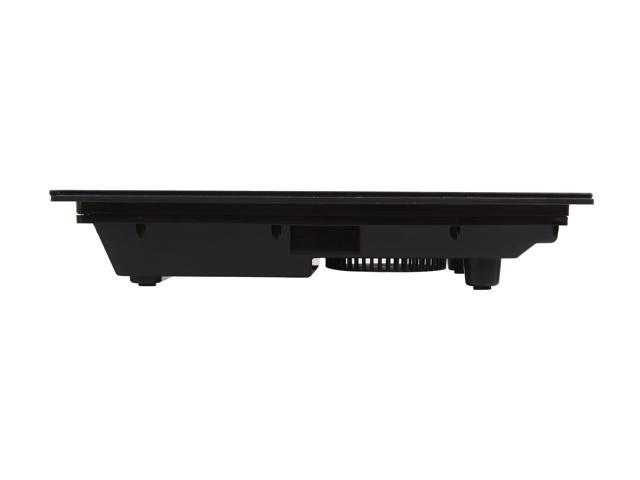 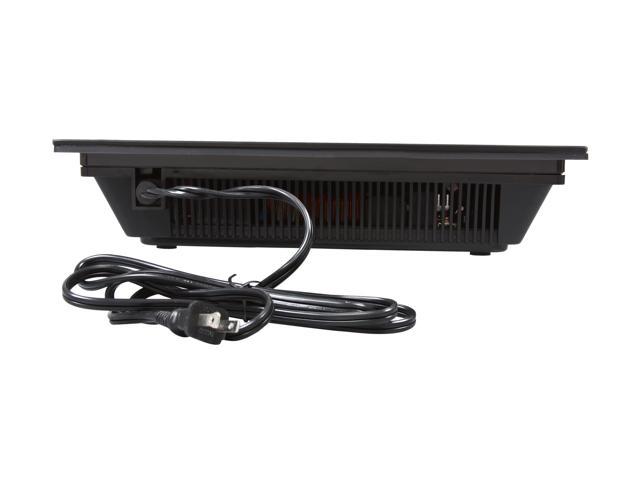 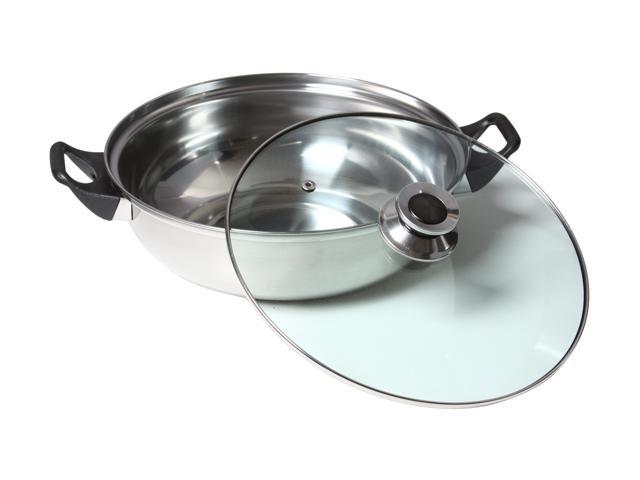 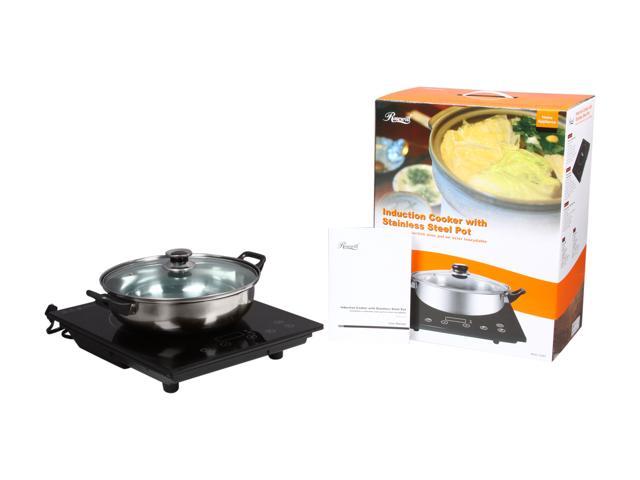 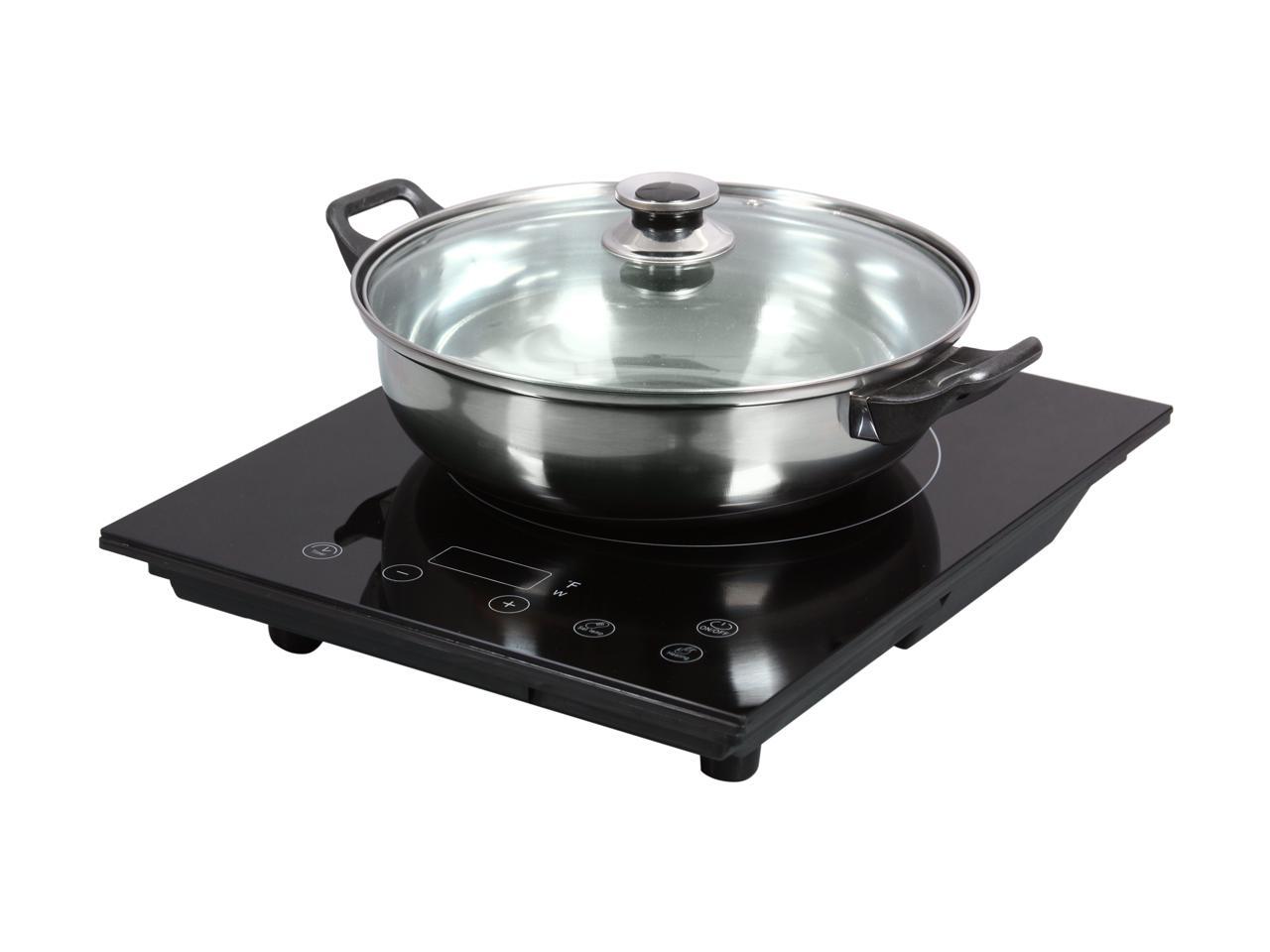 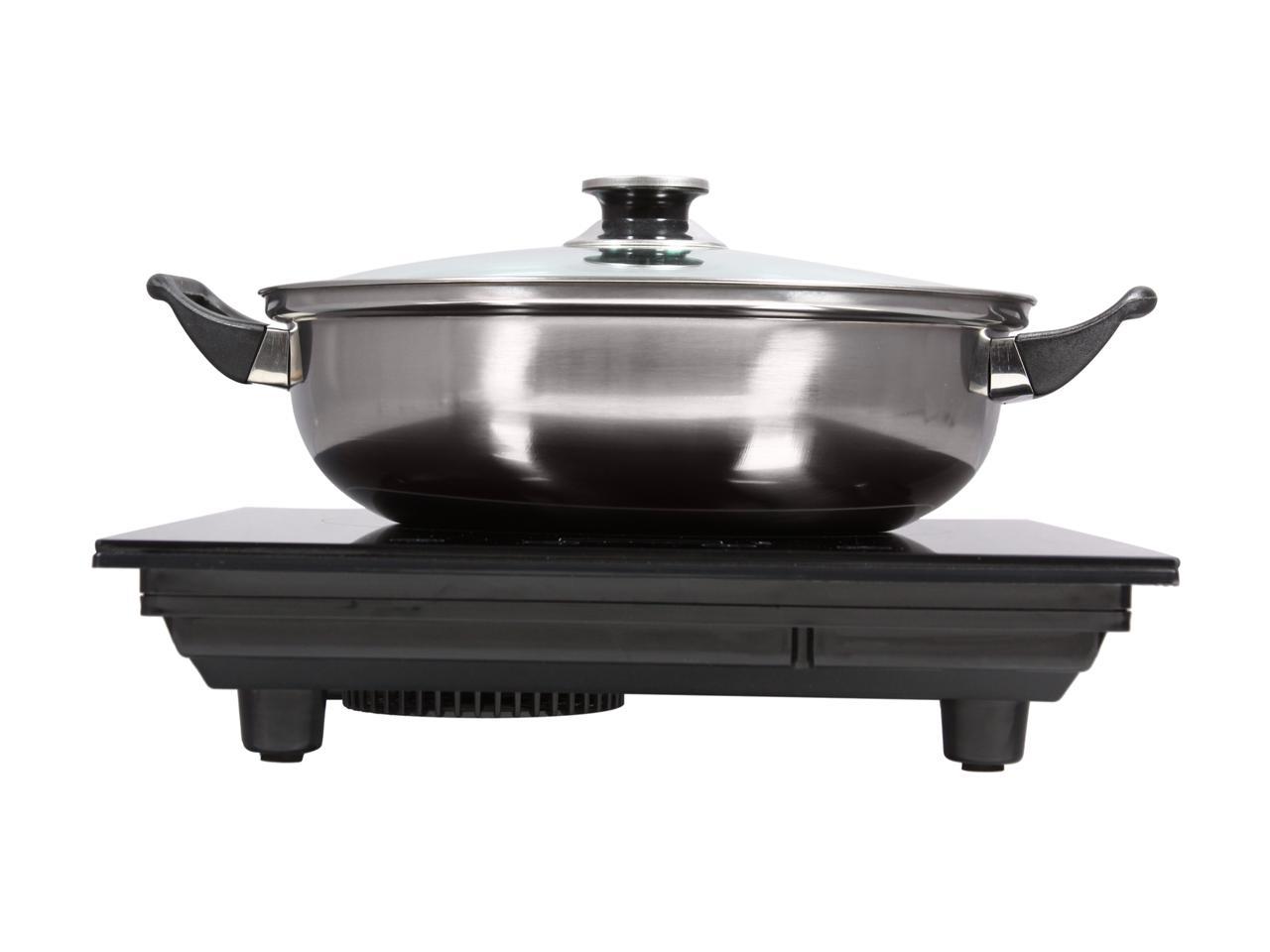 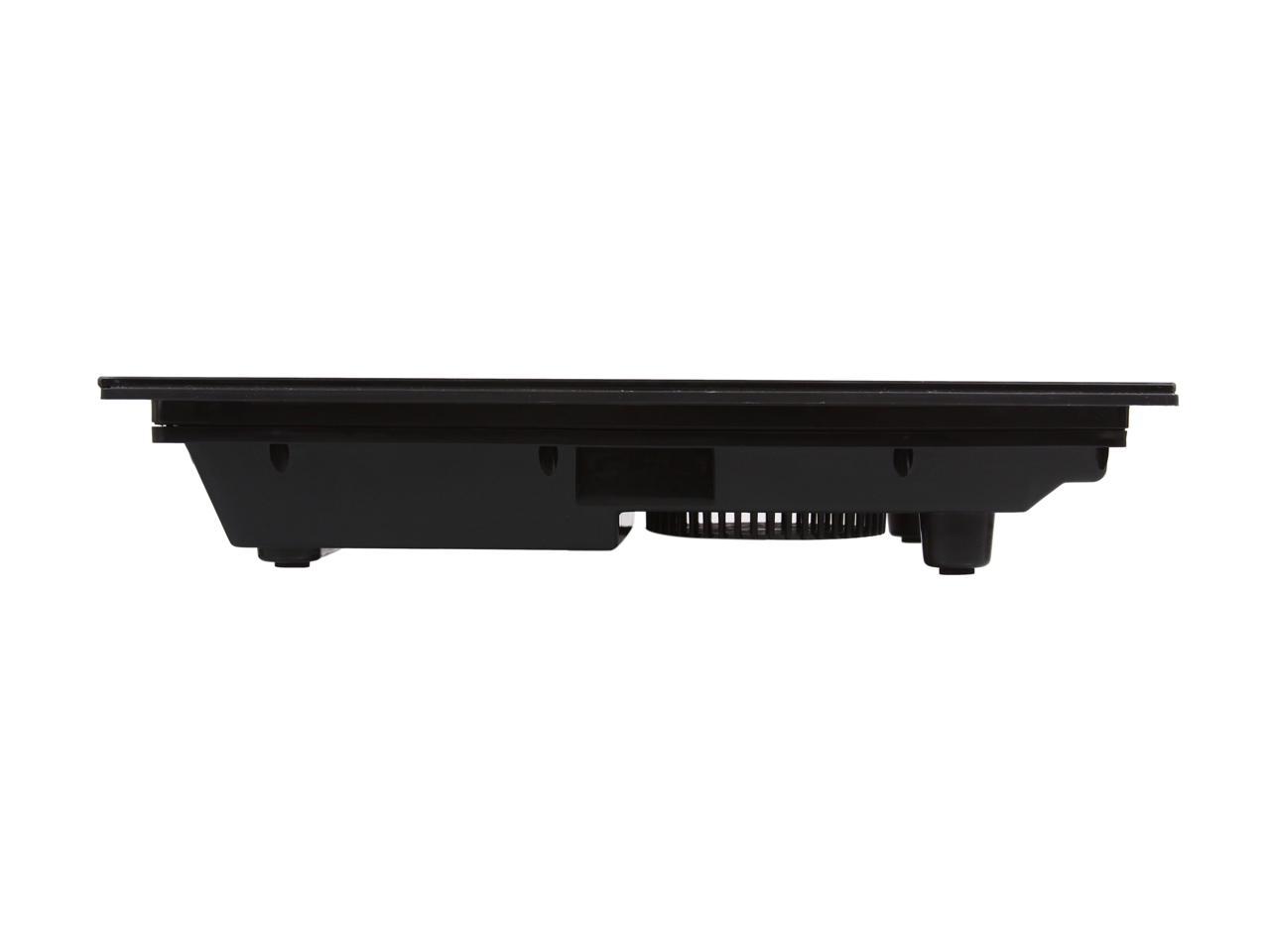 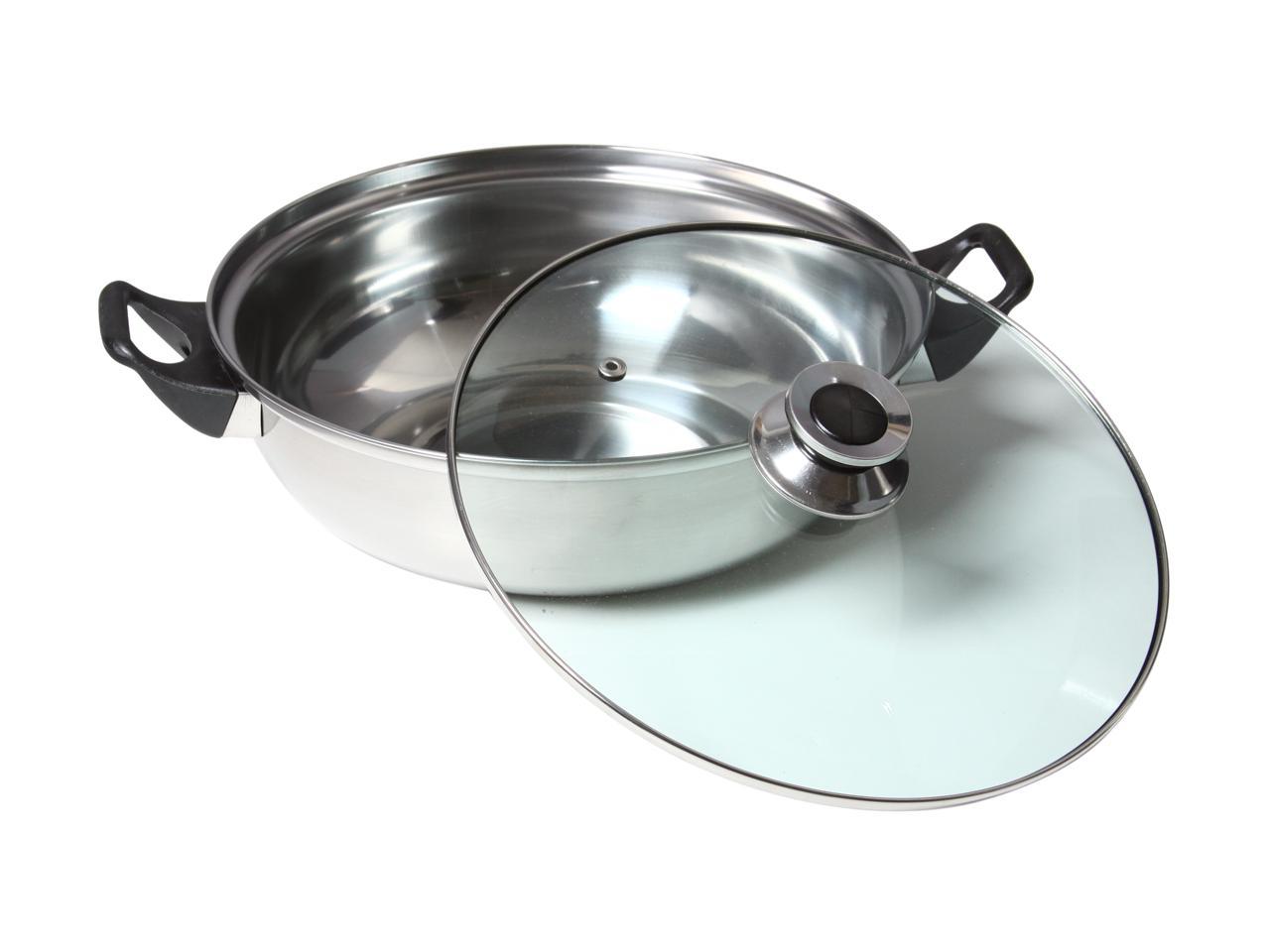 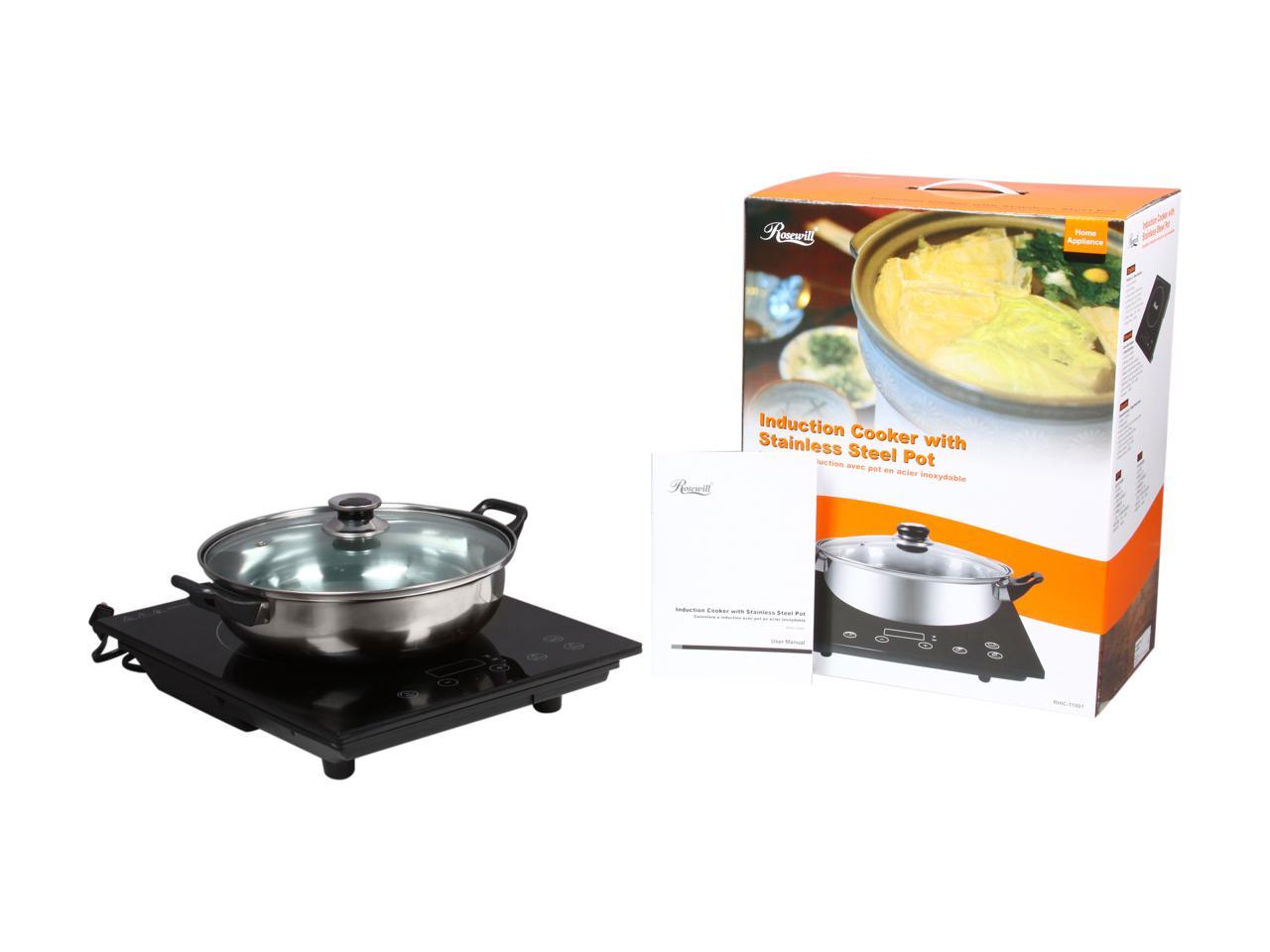 (44) Write a Review
OUT OF STOCK.
Overview
Specs
Reviews

Here comes the Rosewill RHIC-11001, perfect for your cooking. With the Induction Cooktop you can braise, deep frying, stir frying, roast, fry, and even boil water. (Not every cookware piece will work with induction cooktop. If a magnet sticks well to the sole of the pan, it will work on an induction cooktop. Please avoid using any cookware made with aluminum, glass or copper.

Learn more about the Induction cooker with Stainless steel pot

Pros: The price is great! The unit performs well. Works well with stainless cookware. Cast iron works well too. The unit has a "parched pan" sensor that turns the unit off if the pan becomes "too hot," so a good pan will not get damaged if you boil something dry. The black glass top is very stylish and easy to keep clean. The heating "circle," where induction heating occurs in the bottom of the pan is actually something like 6 inches across, making it ideal for small sauce pans and small to mid sized frying pans.

Cons: The manual needs to be rewritten by a native English speaker. Clear instructions would prevent user errors that damage pots & pans and spoil food. While I put my pot on the cook top the first time with water in it, it is easy to see how someone could ruin theirs by simply turning the unit on with an empty pan on the "burner" Does not work with aluminum so no Teflon or anodic cook surfaces (this is an issue with ALL induction cookers and not a negative for this unit). The pot provided is thin and can scorch even with the automatic shut off that is incorporated into the cooker. Pans bigger than the induction ring diameter of about 6 inches will not induction heat beyond that ring and may have cooler areas around the perimeter. Mine has developed a crack in the glass top. I'd guess it is from heat transfer from the pan into the cooktop. I will be exploring the warranty and trying to find guidance about this problem.

Pros: After having used this for about 2 months, I still rave about it. Its wonderful. It heats 4 cups of water from winter cold to boiling in about 7 mins on mid level heat (about 4 mins faster than my gas stove on high). It also maintains an oil temp very well for frying.

Cons: It makes a whining noise that is rather irritating, and having to use only pans that you can stick a magnet to which I have very few of. The pan that comes with it is not bad but not great either, though it works for oatmeal and frying.

Overall Review: I would buy this again and if I knew anyone else who cooked as much as I do I would give it as a holiday/birthday gift. I purchased this at $50 on sale.

Pros: Cooktop works well, after a learning curve. I'd never used an induction cooker before. It actually does respond more like a gas burner than a normal electric burner, with INSTANT response to the controls, but without the wasteful room-heating and buildup of gunk on the kitchen walls you always get with gas burners.

Cons: Pot is very cheap, stamped from a very thin sheet of stainless steel, and it heats slowly. It took me twice as long to boil 3 quarts of water (the max it can hold) in it vs a $10 pot from W*lmart, on this induction cooktop. The pot also has an odd shape and a large raised ring in the bottom, so it's not suitable for frying eggs, cooking meat, pancakes, or anything else that needs a flat bottom. The only reason I can think of for that odd ring is that it helps stiffen the very thin steel this pot is made of; the lid seems better quality than the pot, and that's not saying much. Not worth the $10 it adds to the cost of the cooktop alone, except it does give you an induction-heatable pot right away if you don't already have any. TOTALLY USELESS instruction manual, which is typical from Rosewill; learning to use this cooktop is definitely a trial-and-error experience, and the very peculiar controls do not help at all.

Overall Review: Since the cooktop heat is controlled by something like a thermostat or continuously cycling timer, when it's set to anything lower than the maximum 1500 Watts it cycles continually between full on and off, so it takes a while to figure out what setting is going to keep a pot of pasta, for example, boiling but not boiling over. The various cooking and control modes are so complex, unintuitive, non-user friendly, and miserably documented that I have no idea what most of them do. I just set the power level and the timer, and so far that's been enough.

Pros: This unit look nice and worked well when it was working. I bought this for occasional use when I had company and needed an extra burner, otherwise it is stored on the shelf

Cons: I only used this induction cooktop a few times and kept it stored on a kitchen shelf when not in use. I went to use it yesterday when I had company and the display did not work. Even though it has only been used a few times and looks like new it stopped working and it is not eligible to exchange.

Overall Review: A better replacement time is warranted for this unit. This is the first Rosewill product that I am not satisfied with.

Manufacturer Response:
Dear Valued Customer, Thank you very much for purchasing this unit. We strive to provide the most reliable and highest quality products to our customers. Please kindly contact the Rosewill support team either via phone at 800-575-9885 or via email at rma@rosewill.com so we may assist you with a replacement, if the unit is still under warranty. We look forward to hearing from you. Thanks, Rosewill Customer Care
WEI D.
Ownership: 1 week to 1 month
Verified Owner
only use 3 time9/4/2012 6:10:29 PM

Pros: i used three time only in 10days and the heating button doesn't work. i am really mad!!!

Cons: i used three time only in 10days and the heating button doesn't work. i am really mad!!!

Manufacturer Response:
Dear Valued Customer, Thank you very much for purchasing this unit. We strive to provide the most reliable and highest quality products to our customers. Please kindly contact the Rosewill support team either via phone at 800-575-9885 or via email at rma@rosewill.com so we may assist you with a replacement. Thanks, Rosewill Customer Care
Douglas H.
Ownership: 1 month to 1 year
Verified Owner
Good and Fast2/3/2012 3:55:18 AM

Pros: As others have mentioned, it is fast! I bought this for my wife primarily with summer use in mind. Since we run the AC 24/7 about 5 months of the year, we prefer not to have a lot of excess heat lingering in the kitchen that we have to pay to remove with the AC because of our inefficient, conventional glass cook top. For small jobs, once it is turned off, there is little heat left behind in the glass top itself. My wife is starting to use it as her first choice when something needs to be heated on a cooktop.

Cons: Not that it's serious, but the touch controls take some getting used-to. Ours seems to respond best to a quick tap; a sustained push most often produces no response.

Overall Review: As others have mentioned, the English version of the user manual is poor, at best. I am reasonably good at understanding broken English, and easily understand most things technical, but this manual was a challenge. My Spanish is marginal, but I think the Spanish translation made more sense. On the bright side, it is easy to use once you get the hang of it.

Pros: Heat things up very fast, economical, easy to use

Cons: After 5 months, this cook top does not work anymore. It does not power up. The user manual does not help much. Is it still under warranty ?

Manufacturer Response:
Dear Valued Customer, Thank you very much for purchasing this unit. We strive to provide the most reliable and highest quality products to our customers. Please kindly contact the Rosewill support team either via phone at 800-575-9885 or via email at rma@rosewill.com so we may assist you with a replacement, if the unit is still under warranty. We are eager to assist you in any possible way and look forward to hearing from you soon. Thanks, Rosewill Customer Care