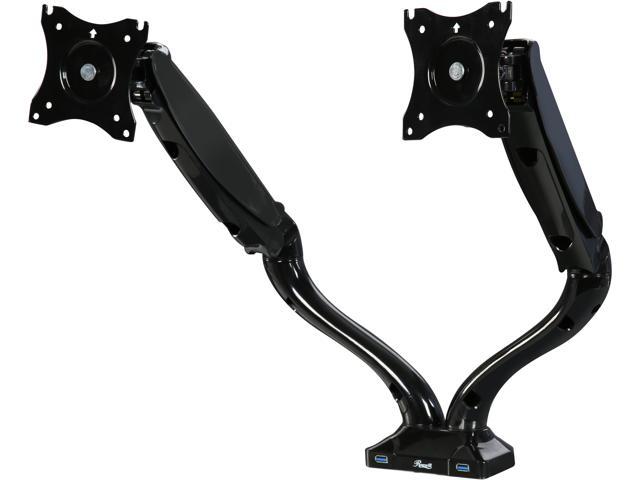 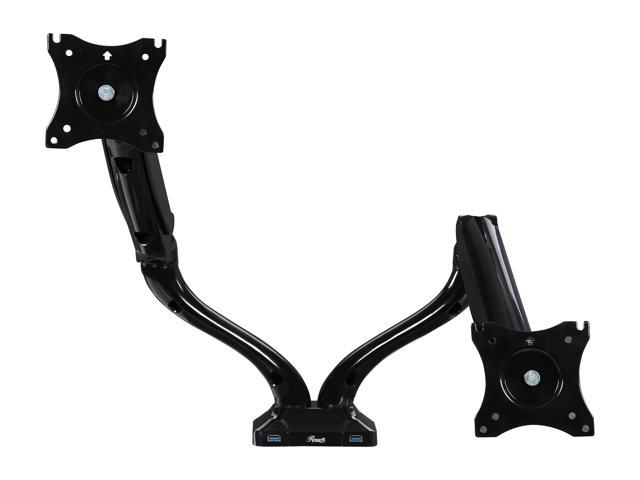 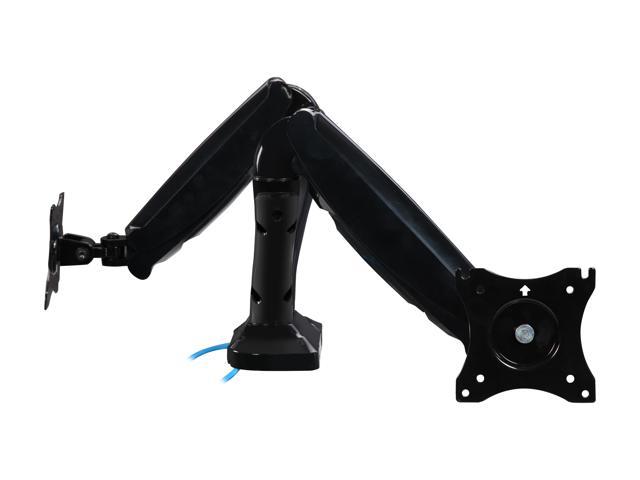 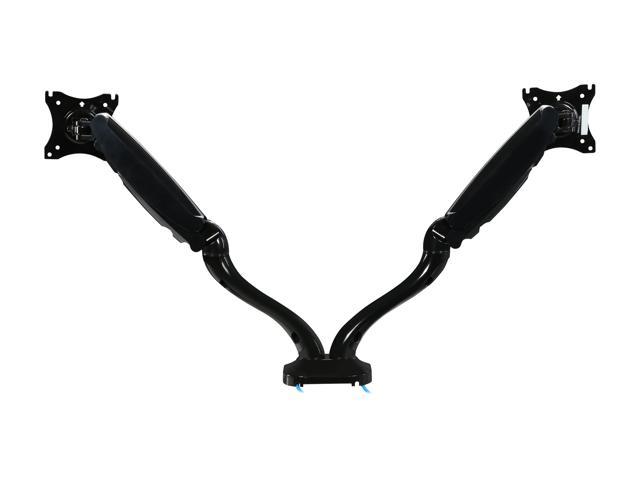 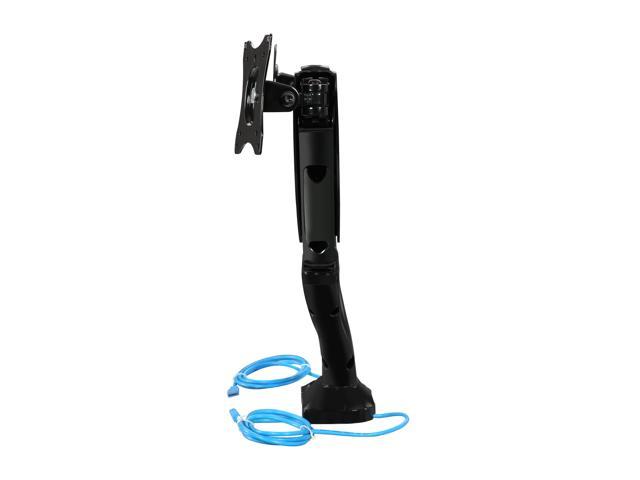 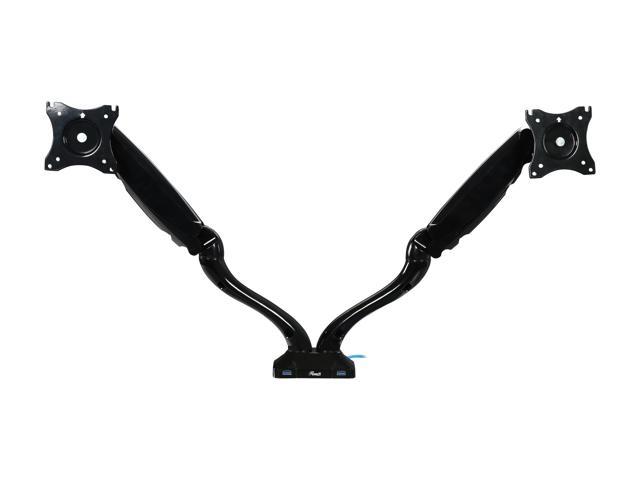 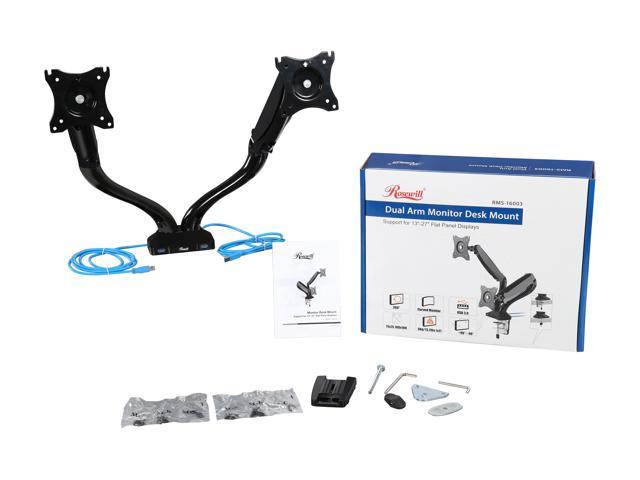 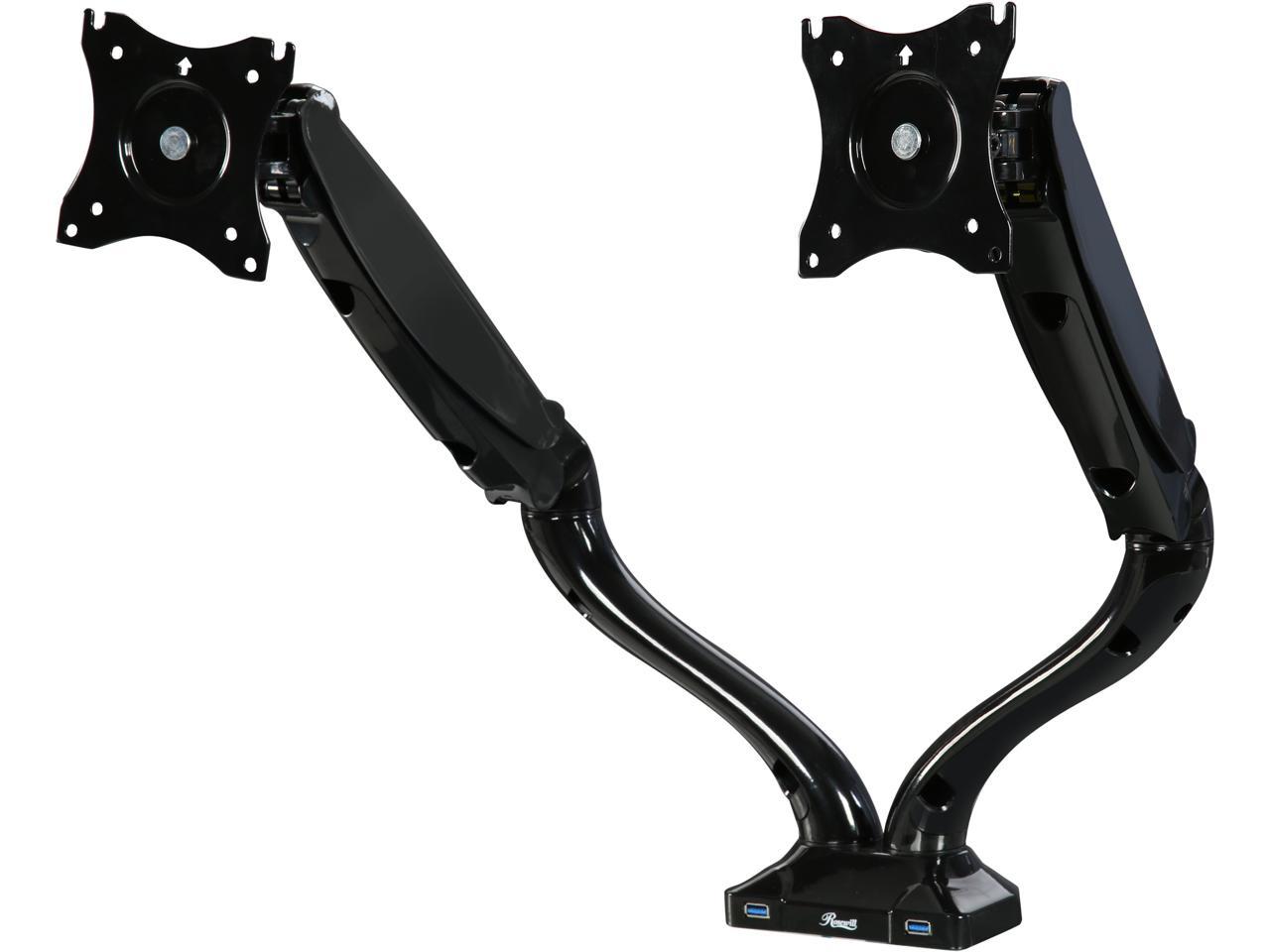 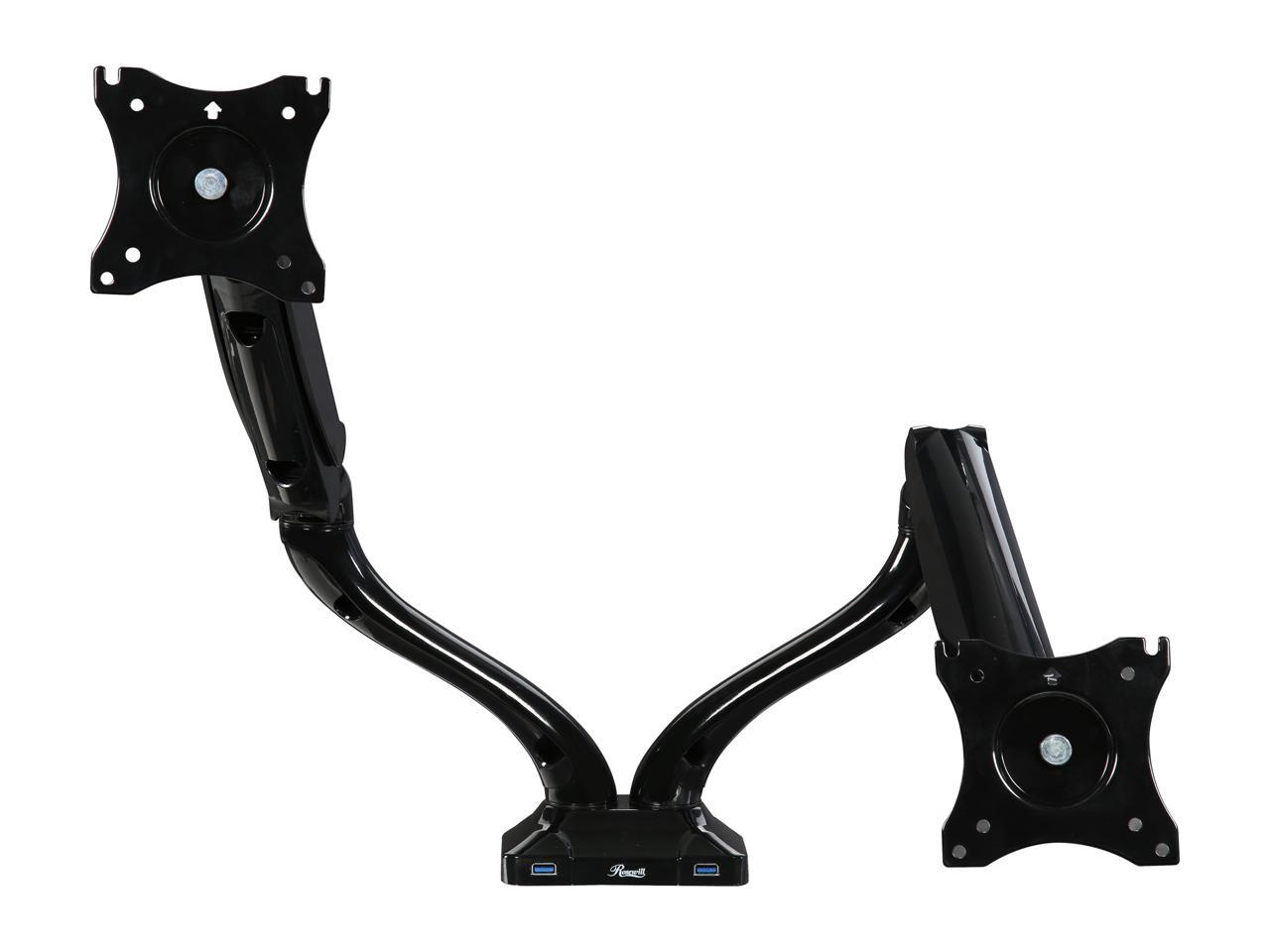 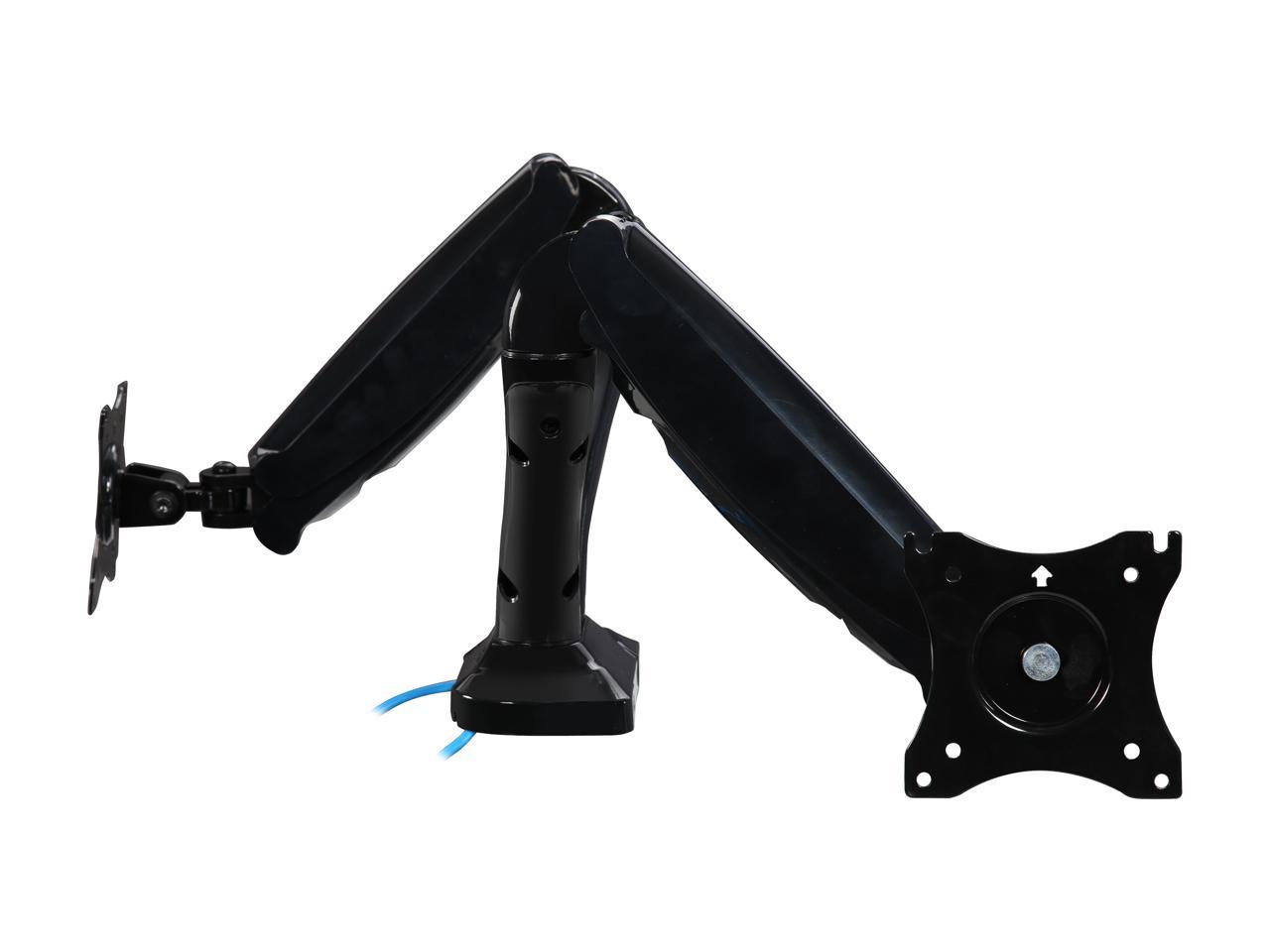 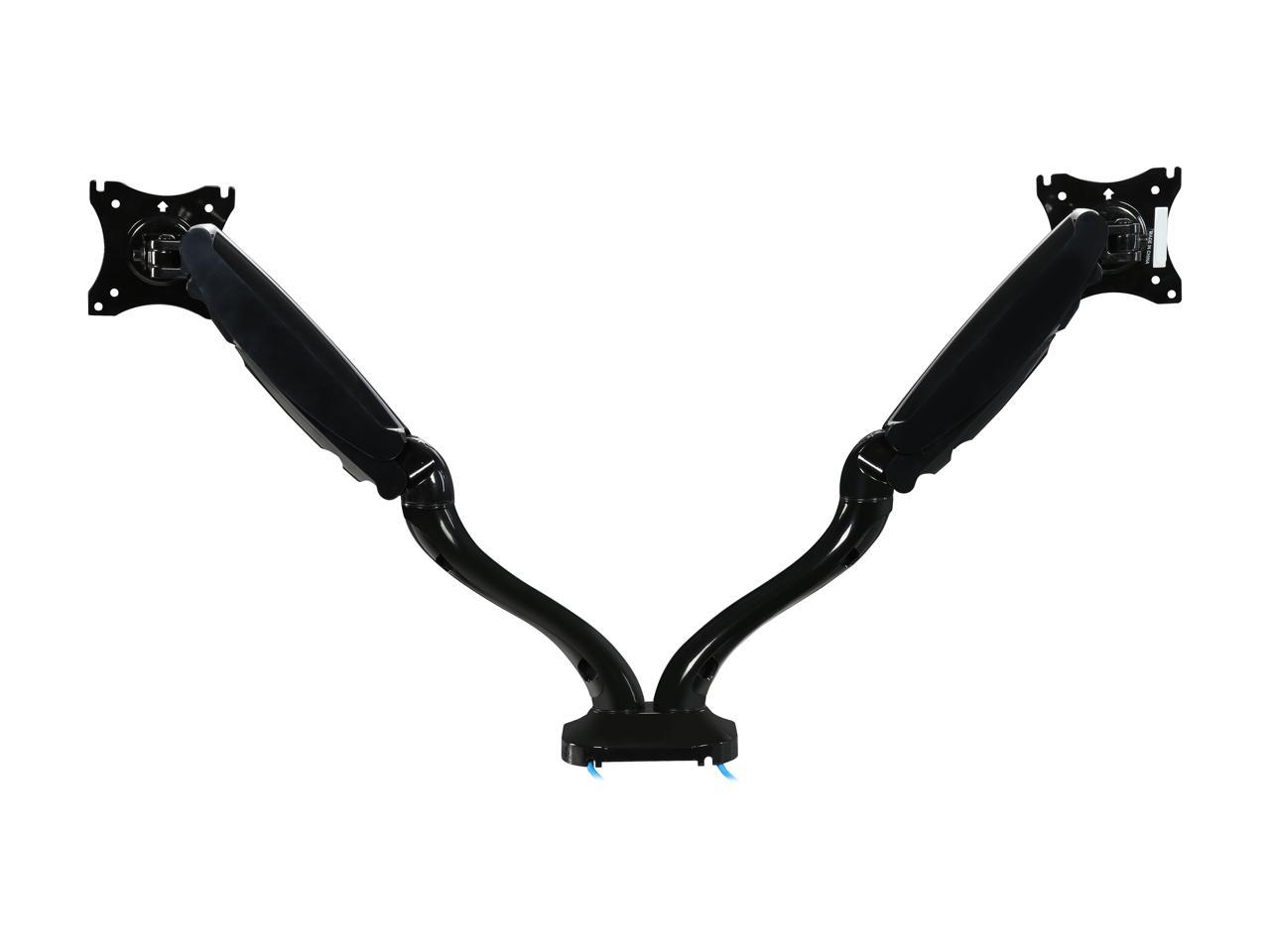 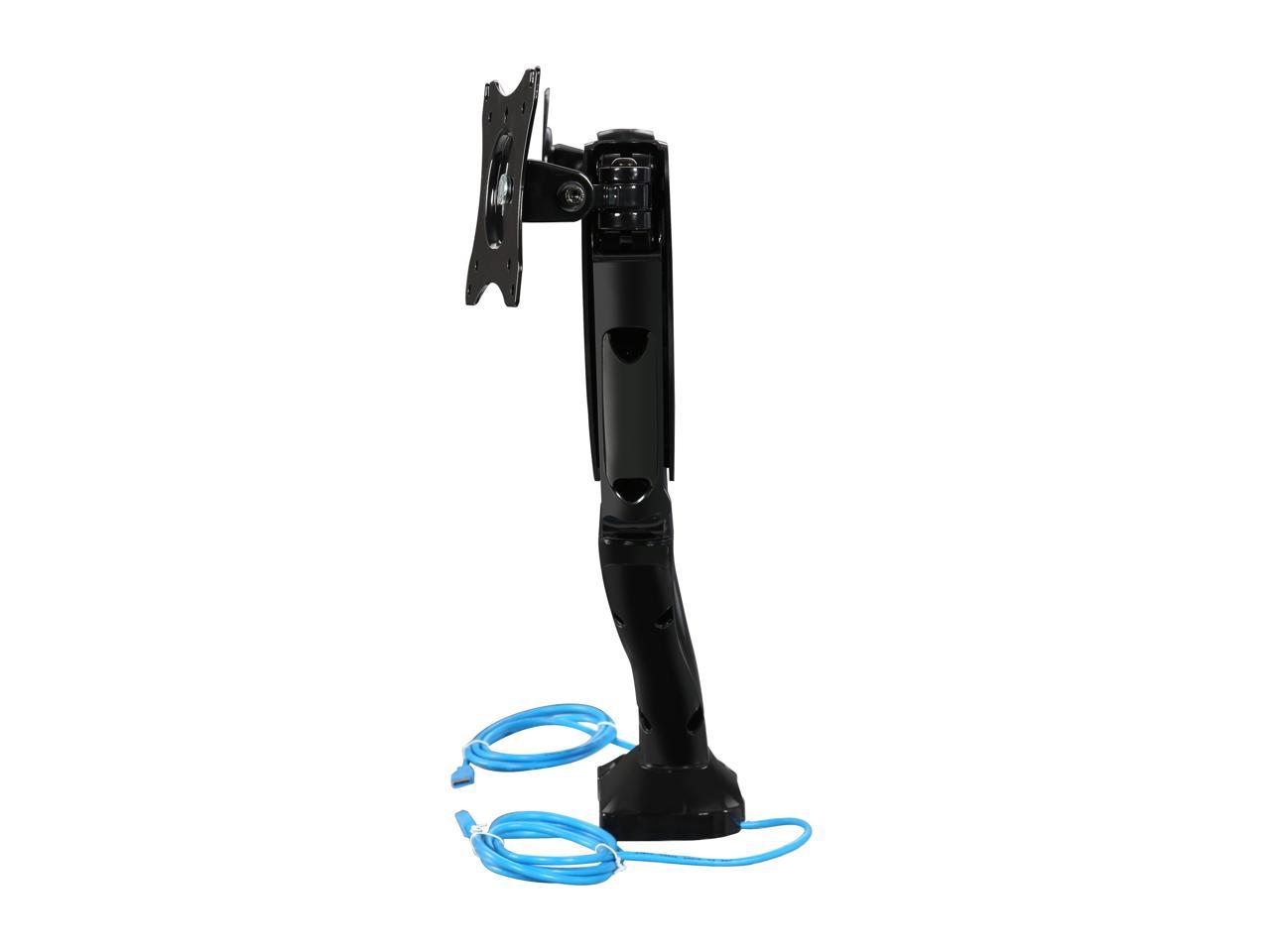 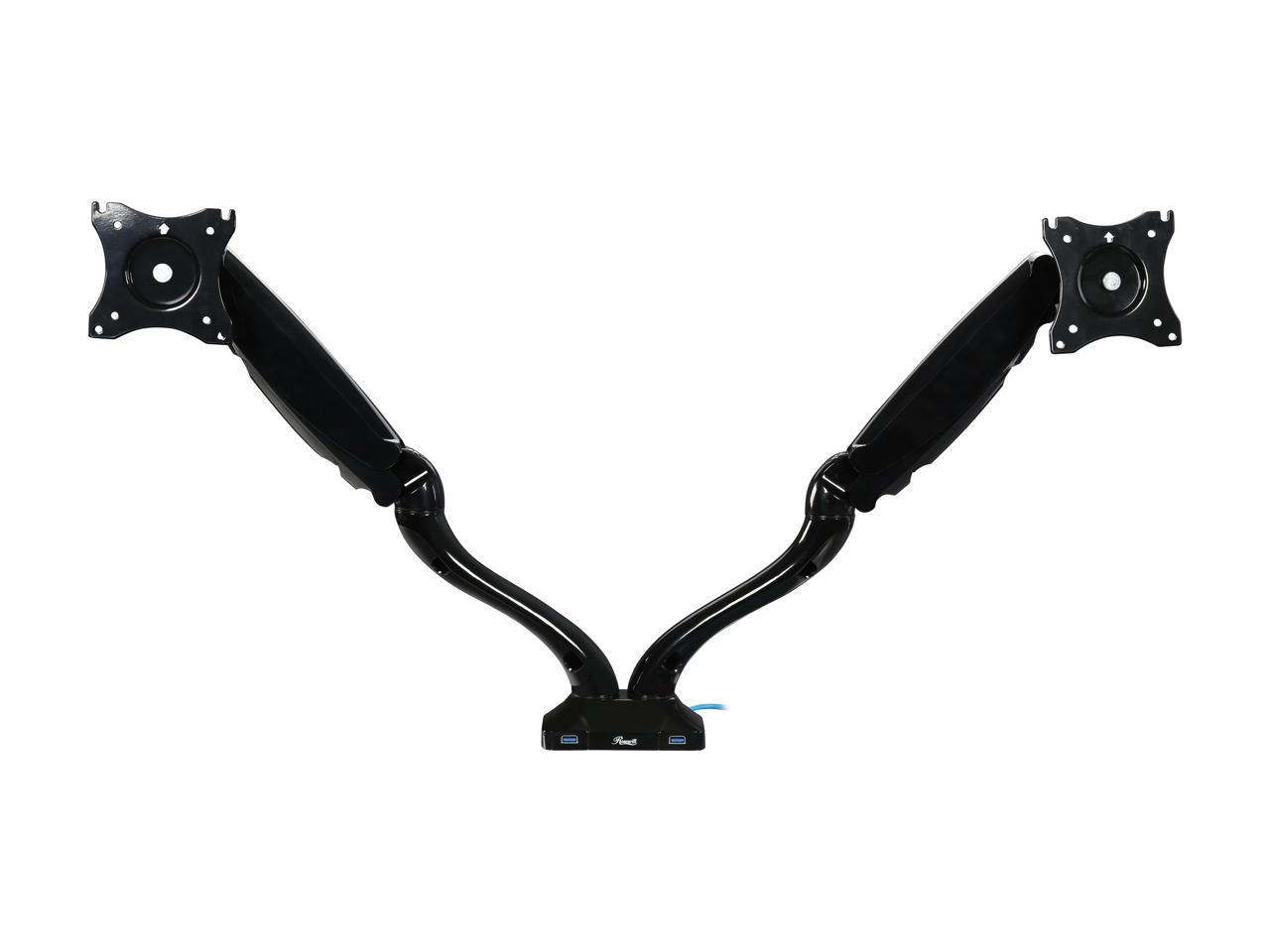 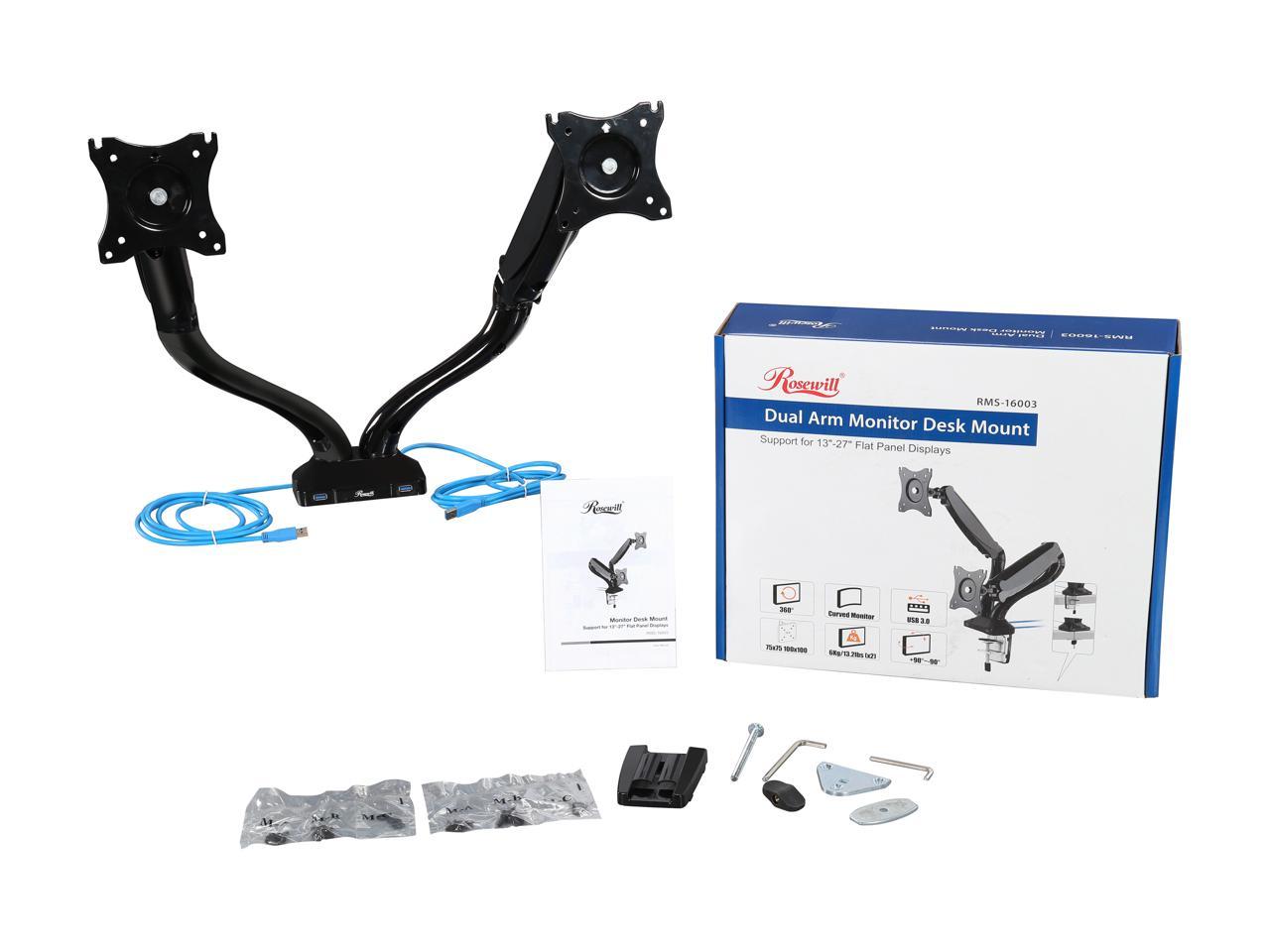 Maximize your working area while saving desk space with the Rosewill RMS-16003 dual monitor mount. Compatible with 75 x 75mm, 100 x 100mm VESA mounting patterns, this desk mount accommodates two 13" - 27" LCD screens with up to 13.2 lbs weight each. You can easily create a multi-monitor setting for better productivity in large projects, better view of expanded Excel spreadsheets, or less switching back and forth in multitasking. Your monitors can be moved as your wish using the gas-spring arm which supports 90° upwards / 45° downwards tilt, 180° swivel, and 360° rotation, for comfortable viewing and easy sharing with co-workers. For your convenience, two USB 3.0 ports are built in thus you don't have to bend over and fumble on the computer case. Plus, this desk mount is toughly built with premium quality materials and superior craftsmanship, giving you enough durability and strength for long-lasting use. Learn more about the Rosewill RMS-16003

Pros: The unit is extremely sturdy and not made cheap at all. As soon as I took it out of the box I could feel this thing was made to last. First piece I noticed is that it has two clamp styles (pictures on NewEgg only show one). It has a large clamp that goes around the back side of the desk (shown in the product pictures). This will work for the majority of desks but what if you have a desk that has a cable hole already in it. The second clamp works perfectly for it. It is just a long screw that has a bracket at the top and bottom. You put it through the cable hole and just clamp it down. It works perfectly and it is incredible strong. It comes with two USB 3.0 ports which is a nice way to make all of those ports on the back of the PC more useful by bringing them to the front. Attaching the monitors to the main arms was very easy and to tighten the arms so they can handle the weight of the monitors was just two simple screws that you just keep turning until you get the arms to the appropriate strength. This Dual Monitor Swivel is an overall strong and well-designed product all around.

Cons: The two USB ports are two individual cables. They could have merged them so you would only need one connector.

Overall Review: Other than it really looks cool once it is setup!

Pros: -Easy Set-Up -Sturdy (within reason! It might hold a 27 " monitor but if you've got a 27 " monitor.... Buyer Beware. Get something more expensive) -Looks great! -Cable Management is pretty nifty for a cheap solution -Mine came with TWO sets of mounting screws--one of the reviewers only received one packet of screws. Insert pun here.

Cons: -Directions take a LITTLE bit of time to figure out. No words, just images. -You will find it VERY difficult to put your monitors side-by-side with this set up. It is POSSIBLE (depending on your monitor sizes) but unlikely. If that is your intention you should seek another mount.

Overall Review: -I have purchased many generic Rosewill products. The price is always right. I take a gamble that it will do exactly what it says it will do with decent quality. I have NEVER yet been disappointed in the quality of a Rosewill product. Take the chance and save big! -A famous online retailer's equivalent stand is like $250! It does the same thing! Can't speak to the quality but why would you pay $250 instead of $60. This stand is a STEAL.

Pros: first time using monitor arms and i am not disapointed easy to setup no hastle at all i seen some other people saying you need 2 person to install this took me 20 mins alone no issues at all

Cons: none as of now 2 weeks in

Overall Review: i have a 27inch benq and a 24inch acer arms holds well no issue so far 2 weeks in. will report later on for updates.

Pros: - Not too bad to setup, first experience with monitor mounts. - Currently supporting a 25" ultra wide LG and a 27" samsung - Originally the monitors sagged the whole arm down to the desk but once you tighten the joins with the tool they give you, it's fine. Just need to fine tune it, but I think that's pretty standard with most monitor mounts from what I understand. far. - Only had these a few weeks, but so far so good

Cons: - Kinda hard to get the hang of how these move and position themselves, but that's about the only negative thing so far. I did manage to get them into a position I like.

Pros: It was easy to set up, and I like the USB 3.1 ports on the front of the mount, very handy. Once you set the pistons at a pressure that will hold your monitors, it does not do this out of the box. They stay pretty well where you want them.

Cons: Cons, It says it can support two 27" monitors, which is what I'm using, which is true. However, if this is your plan I would advise getting a mounting system that supports larger monitors. Because while it does hold the monitors stable and with just a little wobble, there is just not enough adjustability for me personally, I would like to be able to move both monitors closer at times instead of just one, and having to push the other one back some or have it partially blocked is kind of aggravating. I do not think this would be an issue with smaller monitors however.

Pros: Very flexible/adjustable, very sturdy, easy to assemble. 2x USB3 ports on the front. Can be mounted via C-clamp or through a grommet hole.

Cons: Only included 4 M4x12 screws and 4 M5x12 screws for mounting the monitors (mine take M4 screws). Also only included 4 washers to go with these screws. Rosewill, you do realize this is a dual monitor stand and not a single one, right? If you intend to mount identical monitors on this stand you'll need to make a separate trip to your hardware store and pick up more screws. Include 8 of each size screw/washer and I'd give it 5 stars. Also, make instructions easier to understand. Step 6 is not required if mounting via C-clamp (only applicable to grommet mounting according to diagrams), but directions otherwise indicate it's a required step for C-clamp mounting.

Overall Review: I just set this up, and I'm looking forward to using it more! Just need to go to the hardware store to get screws to mount the second monitor first.

Pros: When it is working, it clears up a lot of space on the desk. It's also nice to be able to rotate and position the monitors at will.

Cons: This will not hold as much weight as it claims. Even my lightest monitor will in certain positions cause the whole arm to go down.

Overall Review: If your monitors are very lightweight this will work great. If they are anywhere near 13 lbs though, you are probably going to be disappointed.

Pros: -cheap -easy of use

Cons: -Not much height on arms

Overall Review: Got it on the black friday sale and it was well worth the money i spent