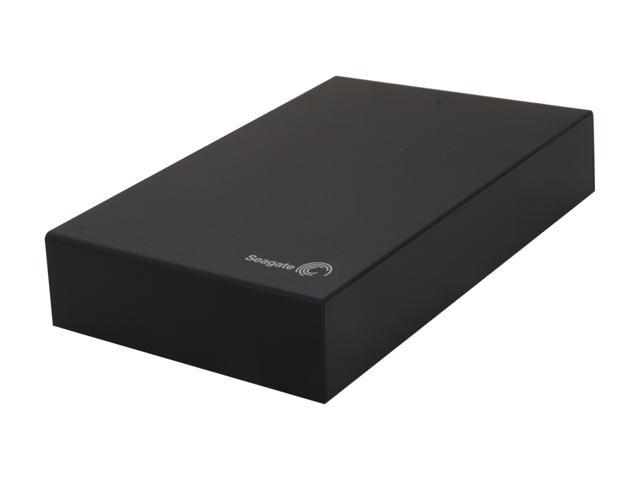 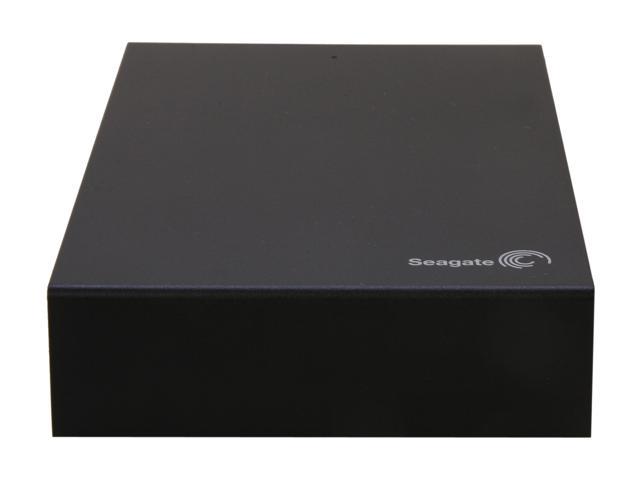 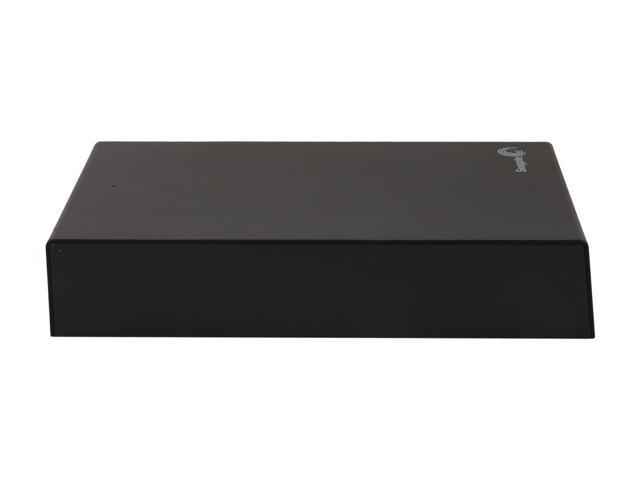 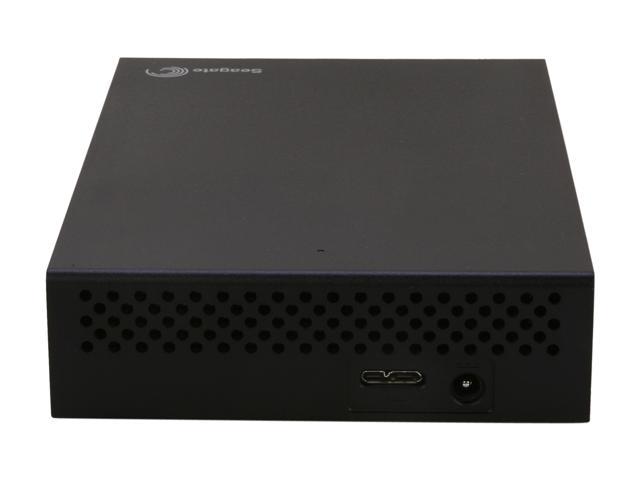 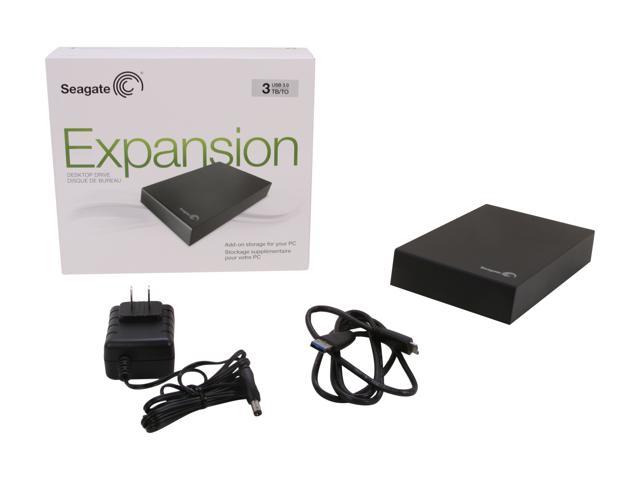 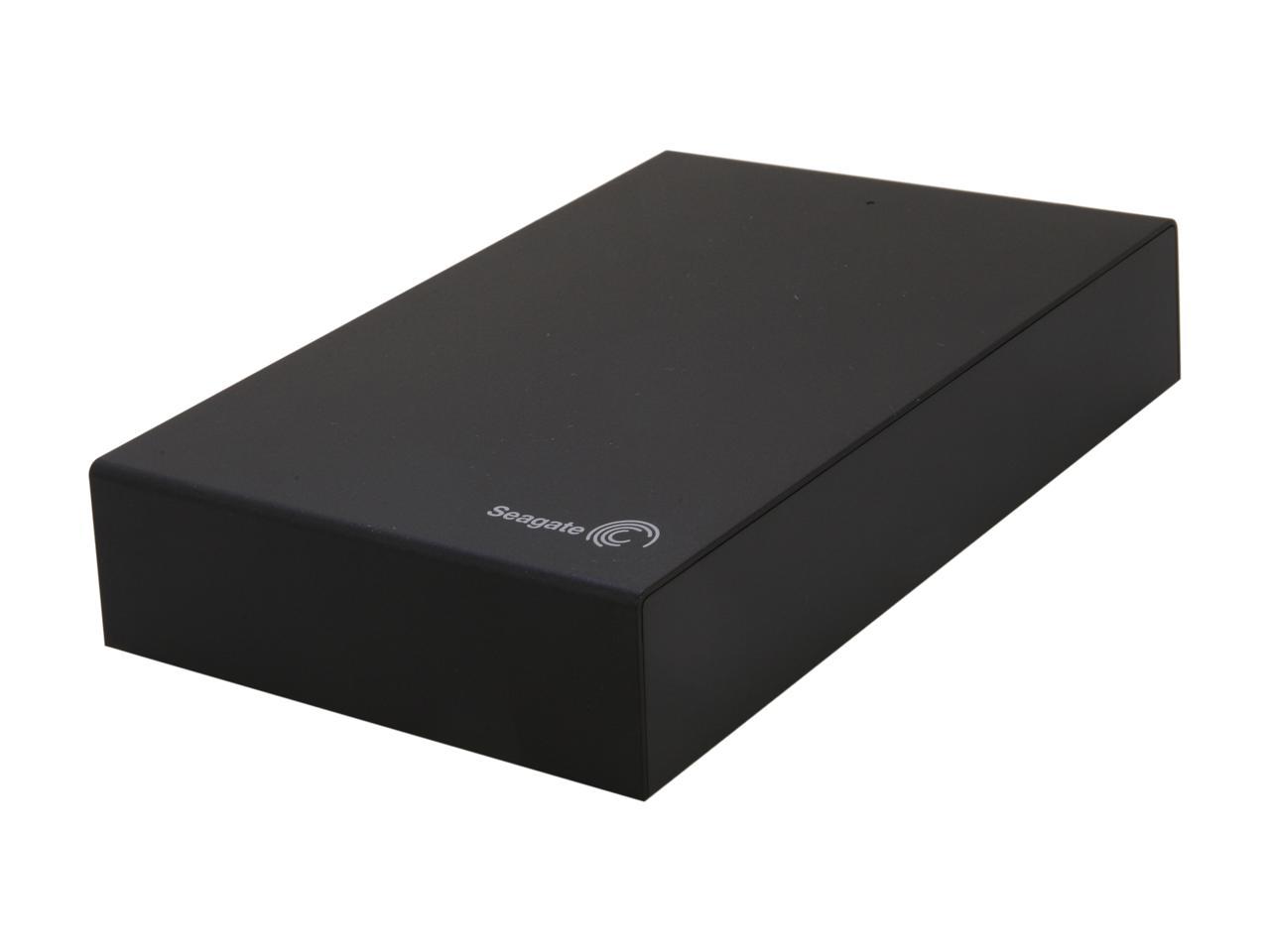 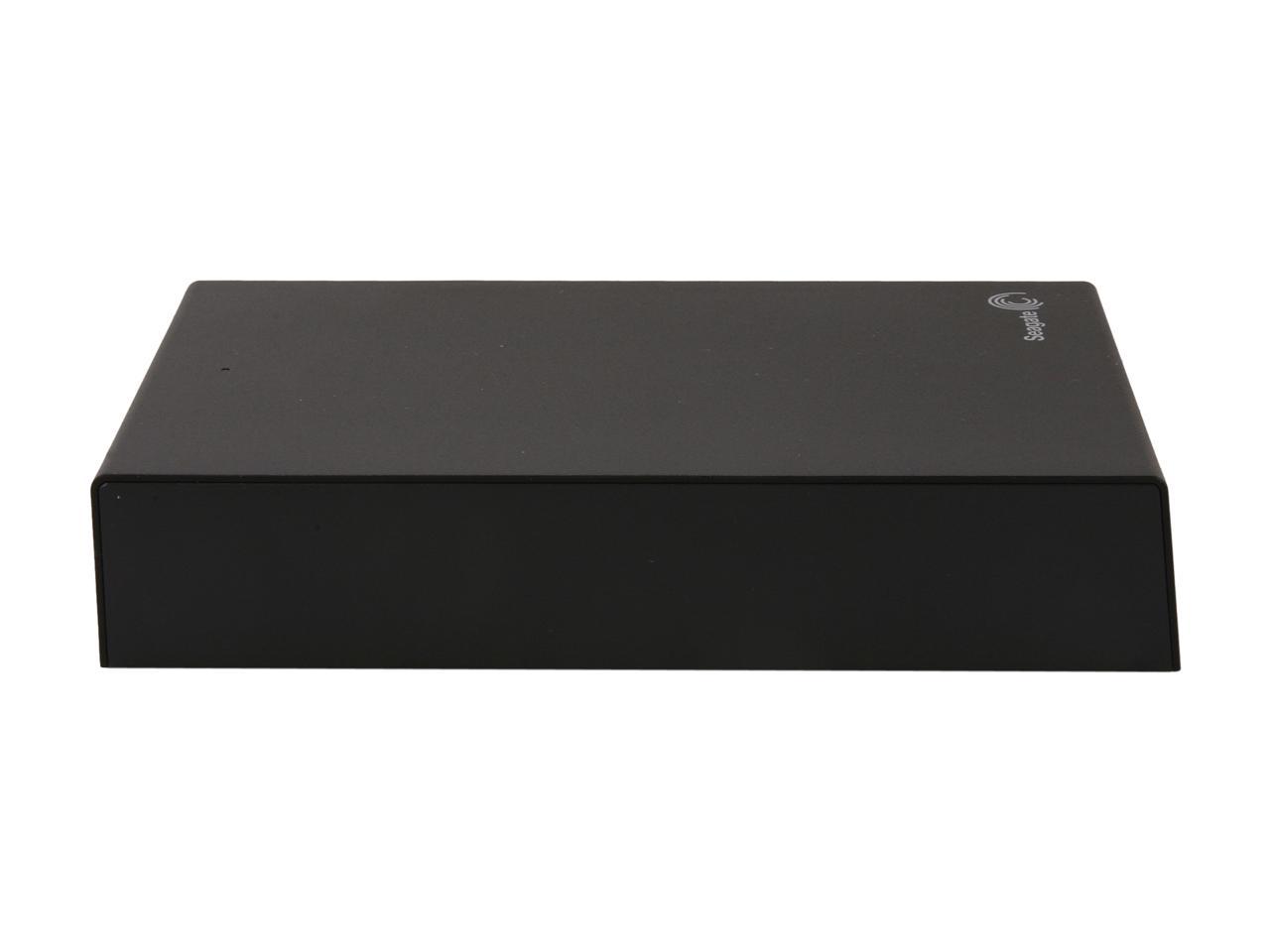 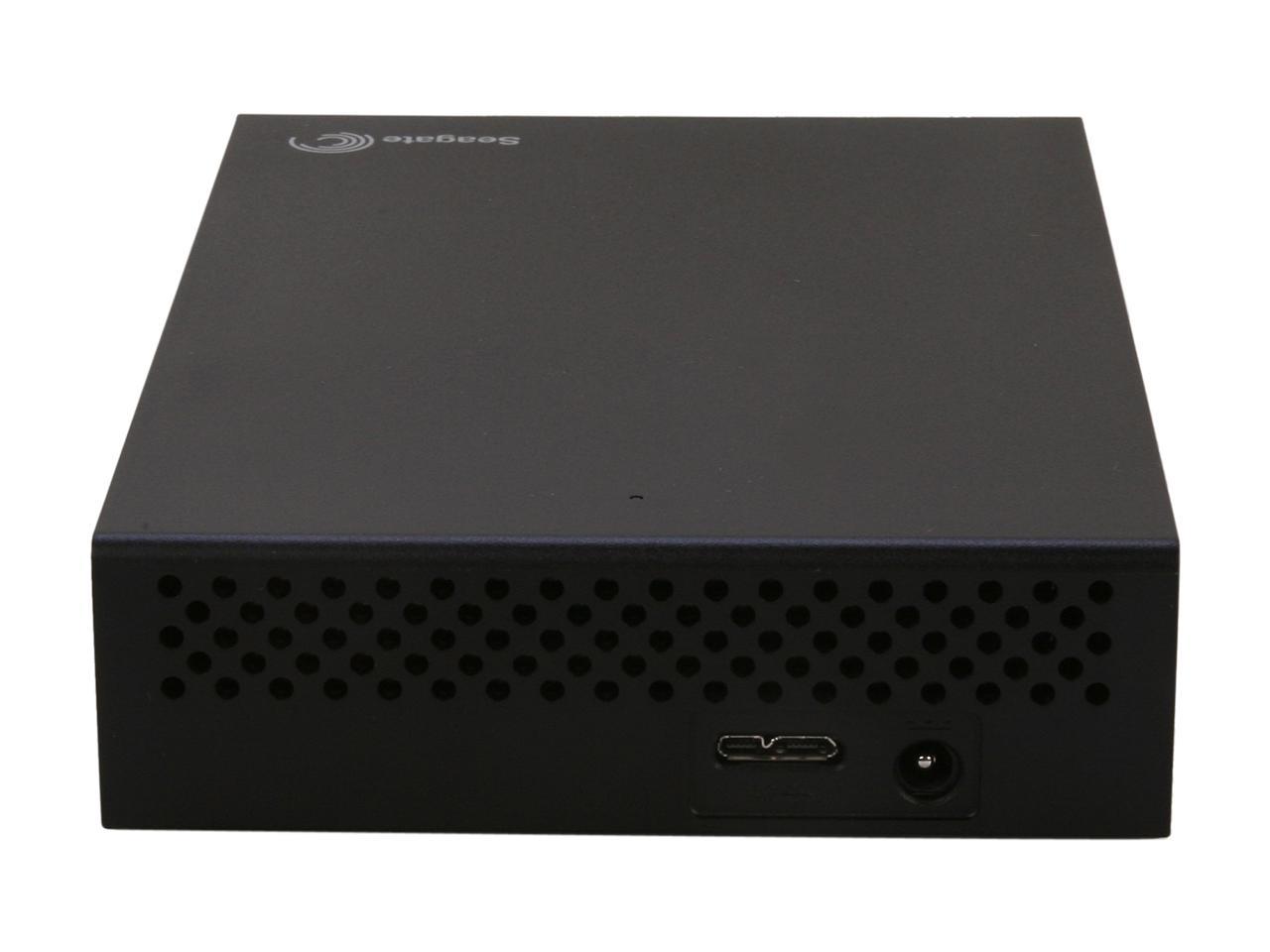 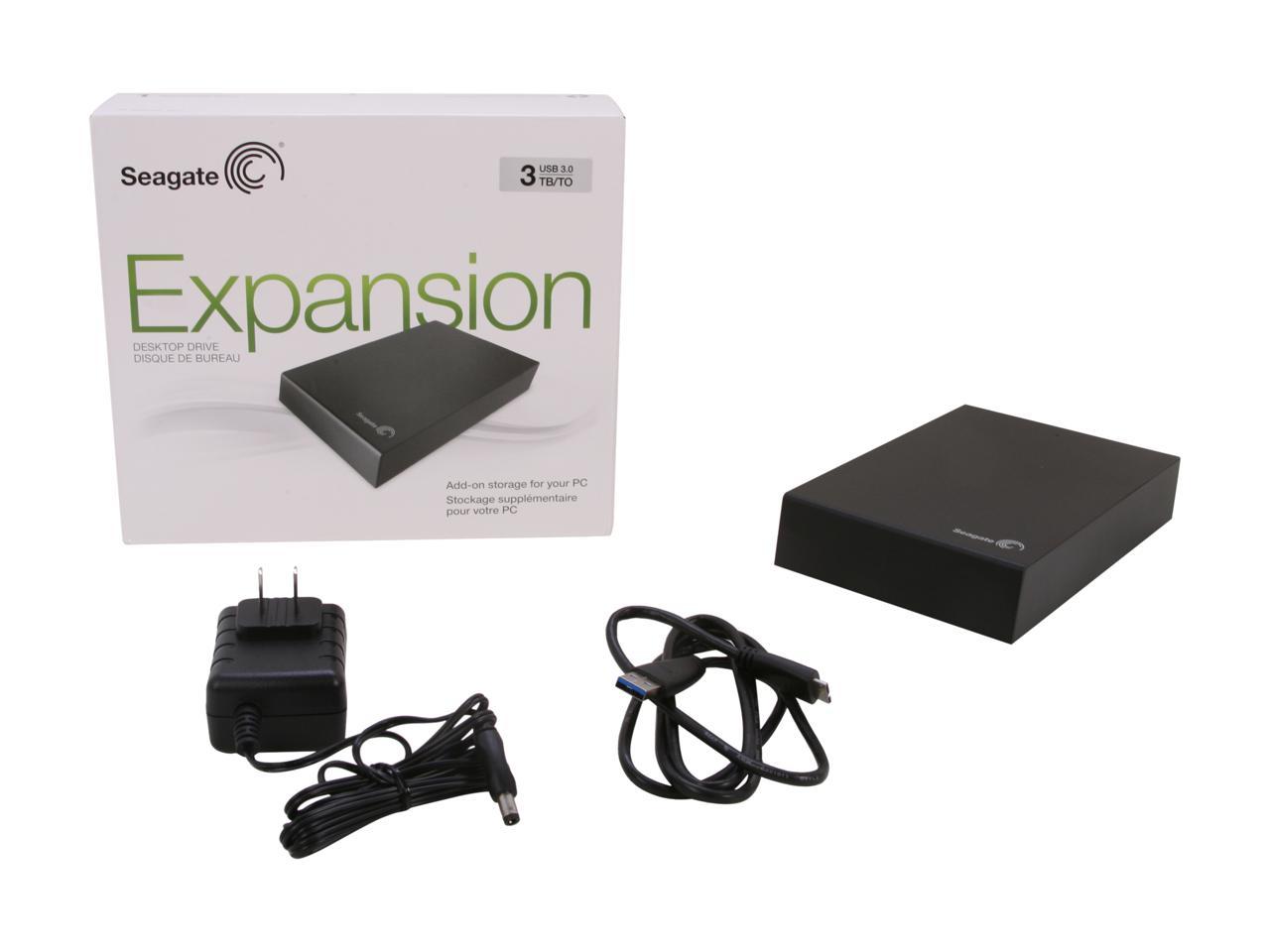 Learn more about the Seagate STBV3000100

Pros: Very inexpensive. No DOA. Decent transfer speeds, but not stellar (see other). Specialty cable (USB 3.0 Micro B to USB 3.0 A) cable is a decent length ( ~46" ) unlike others that have 18" cables. The actual hard drive is made in Thailand, which according to most reviewers is far more reliable than their siblings from China. Fingers crossed. Remember, RAID is your best friend when it comes to hard drives, especially big ones.

Cons: The actual model number of the hard drive in this enclosure is ST3000DM001. If you look that part number up here, you will see 182 out of 779 (23%) scathing (1 egg) reviews and 340 (44%) 5 egg reviews. The case is a joke. This is a sealed hard drive coffin. For intermittent use, you will probably be fine, but I can see this thing cooking itself in no time under extended periods of heavy use (like formatting, for example). The funniest part is that the back and bottom plastic case are covered in holes (you can see the holes in the back in the product pictures), but once you take the plastic shell off, you find that the back and bottom of the drive is wrapped in a solid sheet metal case that completely covers all of the holes! The drive is also not in contact with any of the plastic case, so it has no means of transferring heat to the outside. This poor drive gets no cooling whatsoever. Another really interesting feature is that the hard drive isn't actually attached to the case. So if you turn the case over, you will literally hear a thump as the drive hits the top of the case. Very strange.... To give you an idea how bad this case is, Seagate offers a 2 year warranty on the bare drive that is in this case, but only a 1 year warranty if you buy it packaged in this case. They know it will never last...

Anonymous
Ownership: 1 week to 1 month
Verified Owner
Probably just got a bad drive but Seagate customer service was useless9/13/2012 7:41:33 AM

Pros: The cost at the time of purchase, 8/2012, was roughly 140 which is pretty good at this particular moment in time. It came with an additional 1yr warranty pretty decent reviews by others

Cons: The drive worked well when i received it. Was getting transfer rates of at least 45MB/s on consistant basis - maxing out around 70-75MB/s via USB 3.0. However, one morning, the drive started giving me transfer speeds of no more than 5MB/s and would time out constantly. After spending an hour talking to seagate tech support they came to the conclusion that those speeds were normal" (5:12:48 pm) Kimberly: From all the information we have gathered, this is normal." Long story short, i pretty much am going to avoid settling my issue through seagate because they were of no help at all to me on the matter. Luckily newegg has a great replacement policy.

Overall Review: I'm sure this is a good drive, just happened to get one that was damaged. I am weary if/when the drive does die will seagate provide any help or will i get the same resistance i was given after owning the drive for just a week.

Pros: The drive inside the enclosure is a Seagate ST3000DM001. The bare drive is actually more expensive when purchased by itself! USB 3.0 speed tested on a MacBook Air is about 165 MB/sec read/write using Blackmagic Disk Speed Test.

Cons: None that were obvious. It's a fairly typical external hard drive.

Overall Review: I believe the SATA to USB 3.0 bridge is an ASMedia ASM1053. I didn't actually see the chip itself, but "ASM1053" is printed on the PCB (I didn't want to take it apart). If this is the case, it means that even though the drive is SATA III, the enclosure's SATA to USB bridge chip only operates at SATA II speeds. This is probably okay considering the drive itself isn't that much faster. I did connect the ST3000DM001 to another, proper SATA III to USB 3.0 bride (the ASM1053E), and it was a little faster, about 180 MB/sec read/write as opposed to ~165 MB/sec. This was using Blackmagic Disk Speed Test.

Cons: I bought 2 of these over a year ago, used them for 2 or 3 weeks, filled them up with backup data and unplugged them. One of them had been DOA & RMA'd & replaced with a new one that worked. Well, after trying to access my backup data, guess what, BOTH of them were electrically dead - bricked!!! They were out of warranty, so I popped open the first case and put the drive into a desktop system. Drive was A-OK, but was showing up as MBR (2TB) format rather than GPT. That meant I couldn't access my backup data - the drive presented as 3TB when it was working. And Windows won't let me switch the drive to GPT without first deleting all partitions (and thus deleting all my backup data). Seagate's enclosure controller card must be doing the 3TB "translation". Got a multimeter and tested the power bricks - both were fully functional. The point of failure is thus the enclosure's controller card. So in order to get my backup data, I had to buy another unit just so I could get a working controller card to pull my backup data from the old drive. These controller cards are apparently short-lived & very unreliable.

Overall Review: Correct way to use this product is to test it once as an external drive just to ensure that the drive is working, then crack open the enclosure, pull out the drive, install it in a desktop, convert it to GPT, then format and use it thereafter as a desktop internal hard drive. Do not, I repeat DO NOT, rely on this enclosure as an external storage device!!!!!

Pros: Internal drive is actually a seagate ST3000DM001 which is the fastest 3TB drive on the market today. Eggstremely fast throughput either thru USB3 or if you remove the drive and hook straight to your SATA III Goodness. When paired with my FX 8120 with 16GB, Radeon 6850, and an 120GB SSD my machine FLIES.

Cons: Drive seems to 'sleep' then have the signature 'Seagate chirp' when it fires up for usage. If you worked with computers for a while this is a bit alarming at first as it sounds like it may be dying. No Perfectly normal apparently with these drives as I have a NAS unit with 6 of these in at at work and they do the same thing.

Overall Review: When I bought this, it was cheaper to buy the external drive, than the internal. I wanted the drive for internal use, and gained a free USB3 3.5" external enclosure. I slapped a regular sata II 250GB in there, and it blows all my USB 2.0 drives out of the water. Great deal!

Pros: Drive will transfer at 85MB/s when copying to another drive.

Cons: Drive will go to sleep after 5 or 10 minutes even when copying files to or from it. Download the Seagate Manager software and you can disable this. The drive itself doesn't control the sleeping, it is the USB controller. I took off an egg because of the hassle figuring out how to disable the sleep mode.

Pros: Nice value for the money (bought on sale). I've had a 2TB bouncing around for a couple months that hasn't had any issues. Bought this same model 3TB a couple weeks ago that's been reliable and now have bought a handful more while they're on sale again. Relatively quiet and the blue LED isn't too offensive.... I have run these 3TB's on: -Win7x64 systems through 3.0 ports and 2.0 ports -Win7x86 systems through 3.0 ports and 2.0 ports -And even, even, on a couple old P4 systems with XP Pro through 2.0 ports with no issues (even sees the correct drive size). Between the above systems, it's a combination of Intel, Asus, and Gigabyte MBs....no problems. No issues when the drive is asleep with it waking up and being available within a couple seconds...such a short time that I haven't even bothered to time it. I blink two or three times and it's ready. Had no issues with the drive going to sleep while transferring loads of date (about an hour for one dump). Overall I like these.

Cons: Wall wart isn't a side saddle, so if you have a traditional "strip" surge protector it'll probably cover the plug(s) around it. However...not pulling an egg for that since many many manf do that. Would prefer some additional holes along the sides to ensure good cooling during warmer weather, but I haven't seen any high temps so far with any of these. Keep them on a completely flat surface so the bottom holes aren't blocked and they should be fine. And remember to dust not only the shelf, but compressed air into the drive once in awhile... Ignorant reviewers...see "Other Thoughts" below.

Overall Review: First...the cable that comes with it is standard (it's a micro). Decent standard length. Go downtown and buy one at an electronics store and it'll be the same..ok? Check the cable section here on egg and it'll be the same..ok? Second... Install your motherboard specific drivers Install your motherboard specific drivers Install your motherboard specific drivers What is it with a number of you, that you don't get this? I took that XP Pro system mentioned above (it's basically media storage), that is working just fine through 2.0 USB, and imaged it back to an earlier build (only XP drivers-no MB manf drivers). Sure enough it choked on installing this drive when I plugged it into a USB port. I then installed the USB drivers from the MB manf (Intel) website and the drive works fine (with dreary 2.0 speeds, but it works). An ancient operating system, on an ancient hardware platform and everything works fine once the correct drivers (which btw are ancient too) are installed. Stop automatically blaming Seagate and MS...if you installed a new graphics card, NIC, or printer you'd go to the companys website and download the latest drivers rather than use that 6 month old disc of drivers (at least I hope you would). So why are you using generic drivers that are a couple years old? The first thing we do in my IT support section when pulling a new system out of the box is go to the MB manf website to get the latest bios/drivers. Anyone familiar with the infamous Dell laptop bouncing trackpad issue? Yeah, that happens when using the MS generic drivers....it gets fixed when the Dell specific drivers are installed. It'll take you all of 10 minutes to go to a website/install drivers/and reboot for you to see if it fixes things with your USB port...even if you installed them back when you got your system, check for updates. Out of curiosity I looked through these reviews, and don't think I saw a single person comment that they went to their MB manf website to get the latest USB drivers to troubleshoot (sorry if I missed someone who actually did). That's just lazy and anyone who is listing themselves as a 4-5 knowledge and didn't do this, should downgrade themselves by 2.

Overall Review: This replaced two 1TB drives that lasted for I don't know how many years, maybe 5 or 6. This one lasted about a year. It has been sitting in the same place, untouched, for the whole time and last night I heard the platter start to make funny sounds, and now it's toast. Disk Utility could not repair it, I think it's faulty hardware.