Top Rated
136 Ratings (85% Positive)
This badge confirms that this seller has high ratings based on customer satisfaction and on-time delivery. See More
Sold and shipped by:

SegotepContact Seller
This product is sold direct from the manufacturer.
Ships from United States.
136 Ratings (85% Positive)
On-Time
Delivery
88.24%
Product
Accuracy
93.38%
Customer Service
Satisfactory
83.91%
View All Seller's Reviews
This item is currently out of stock and it may or may not be restocked.
Out of Stock
Add To ListFound on 1 wish list 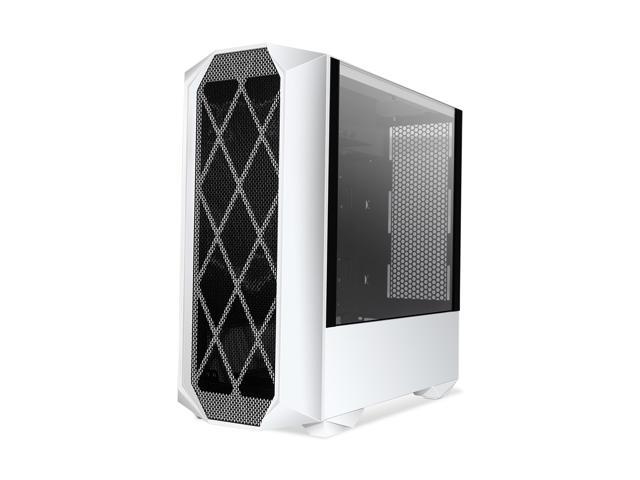 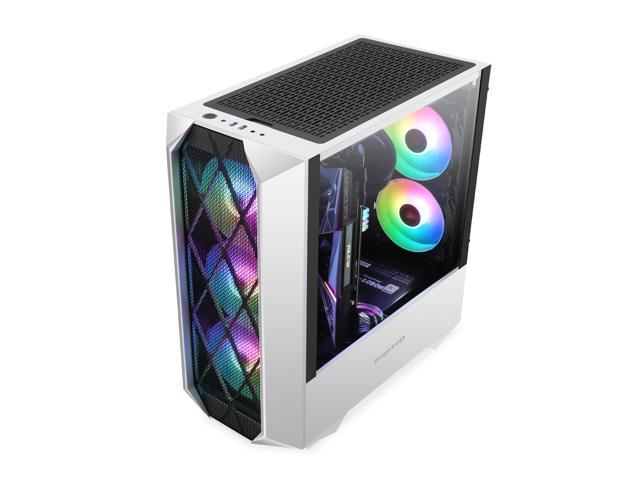 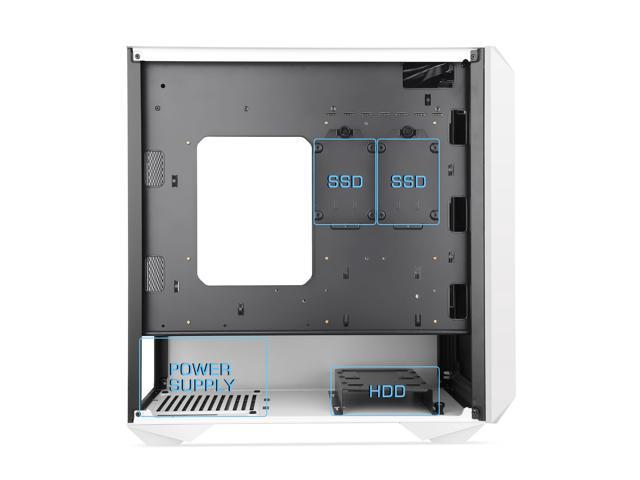 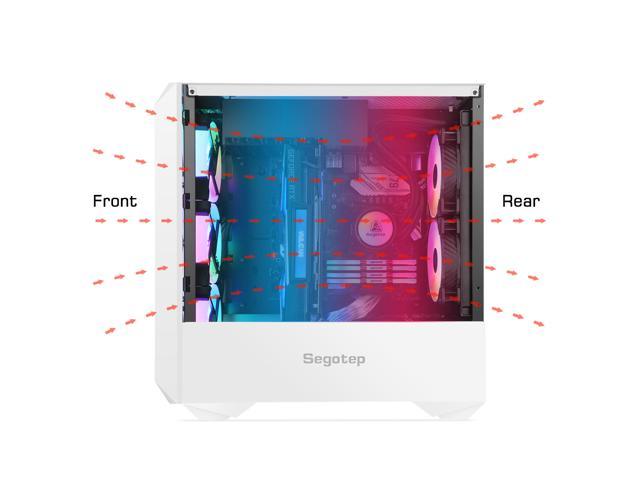 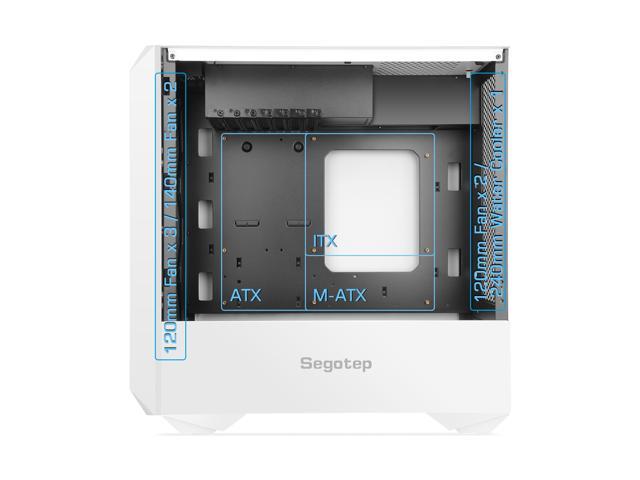 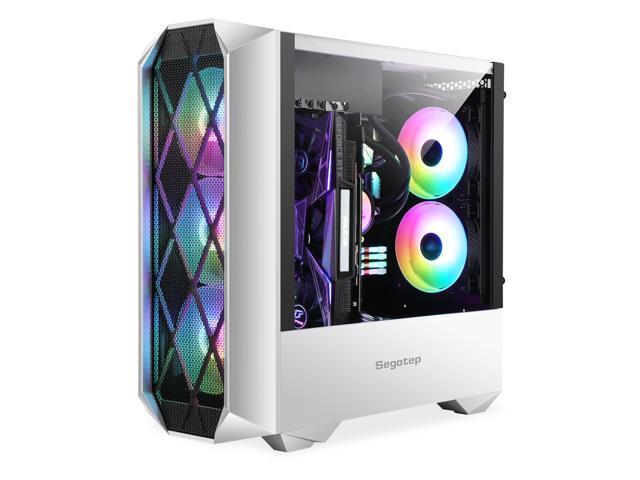 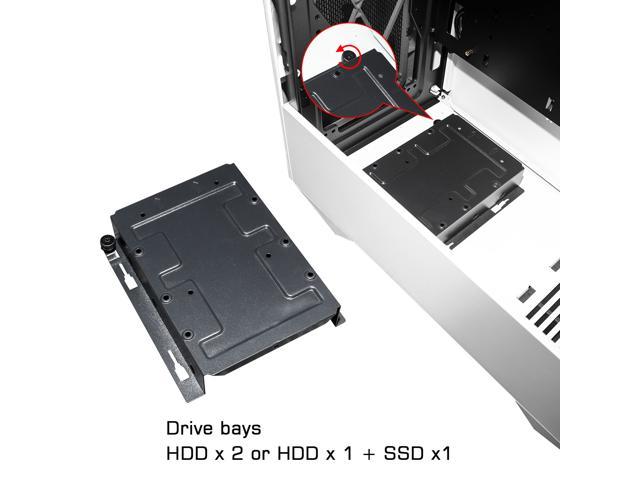 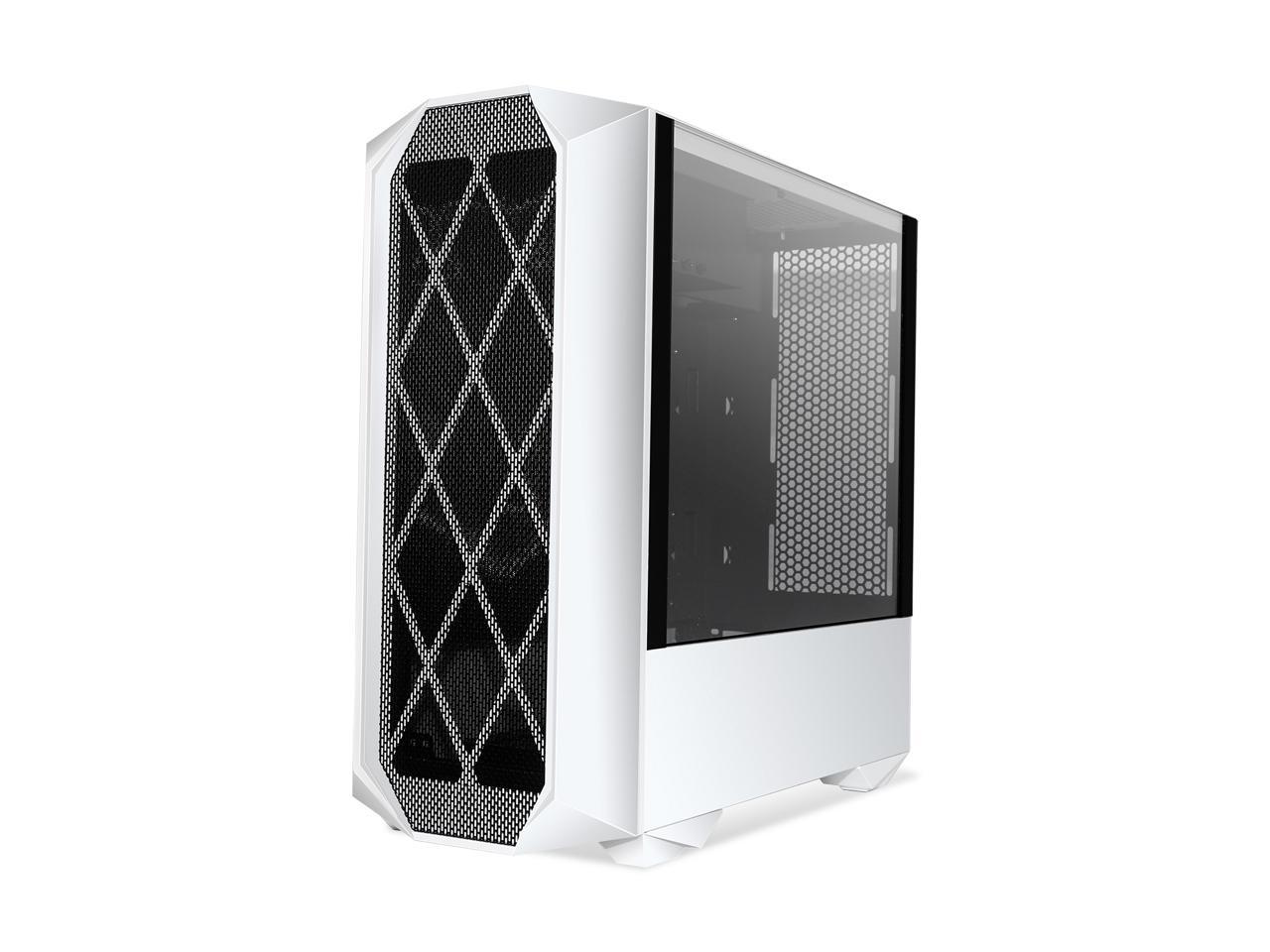 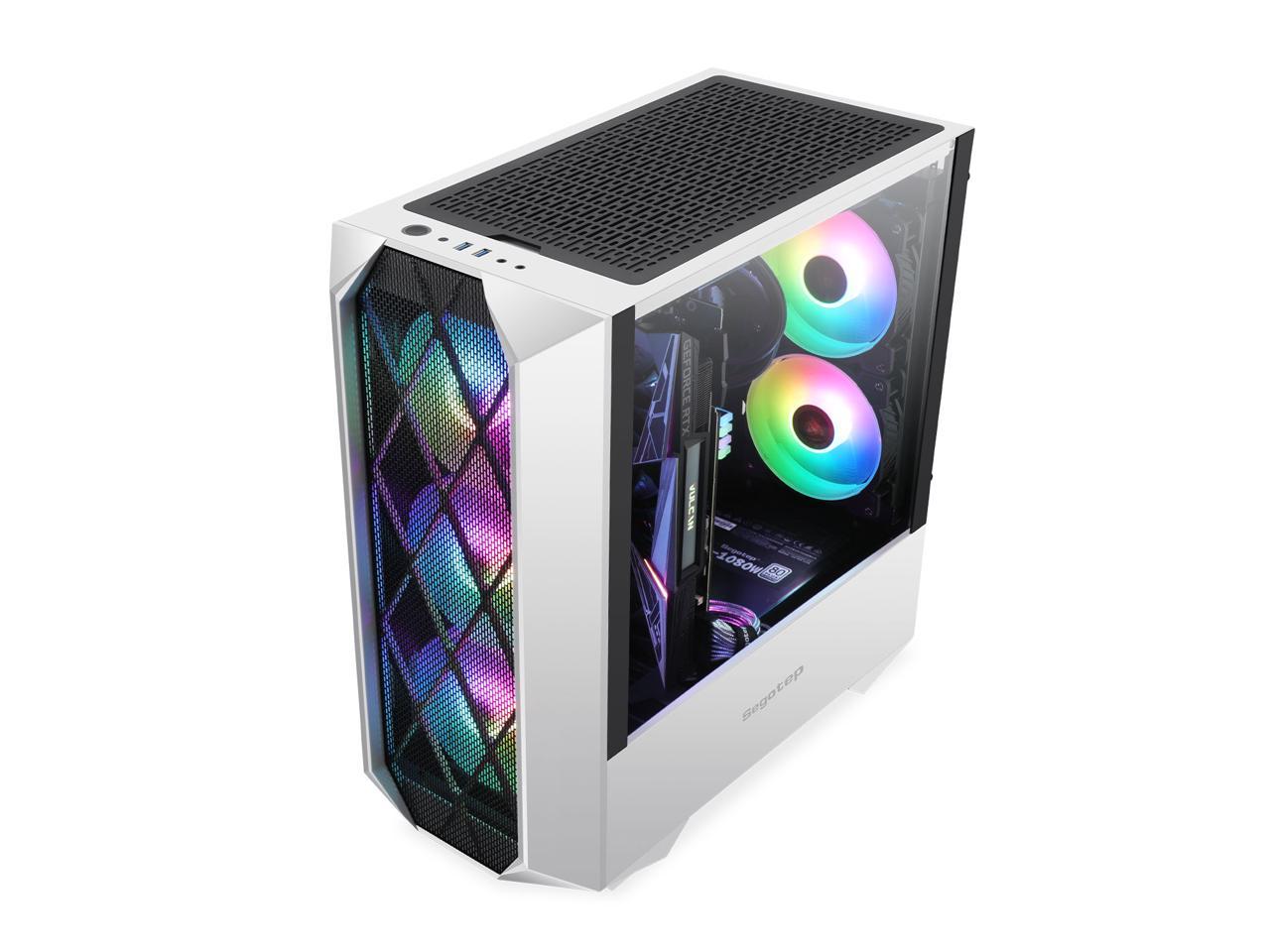 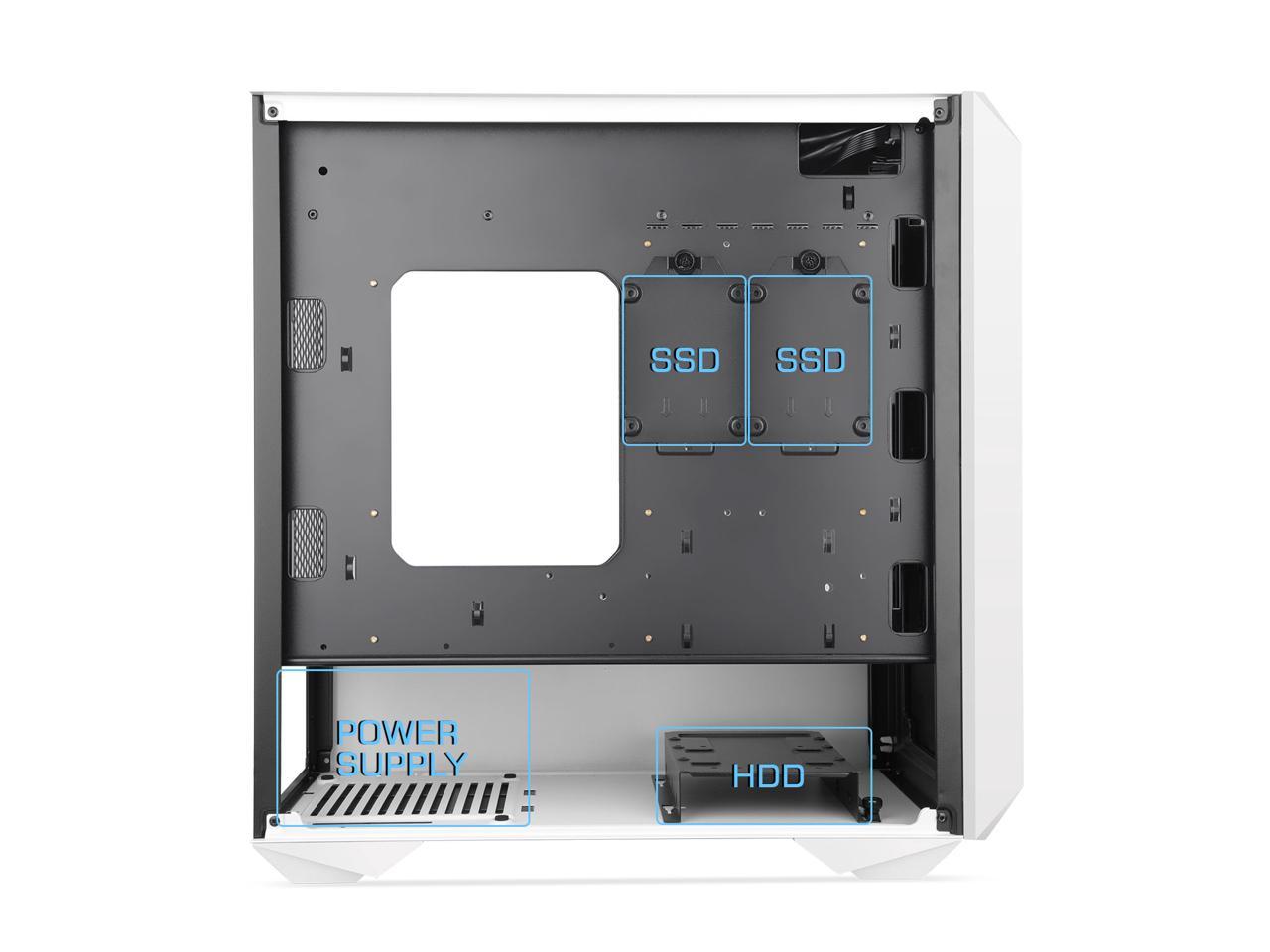 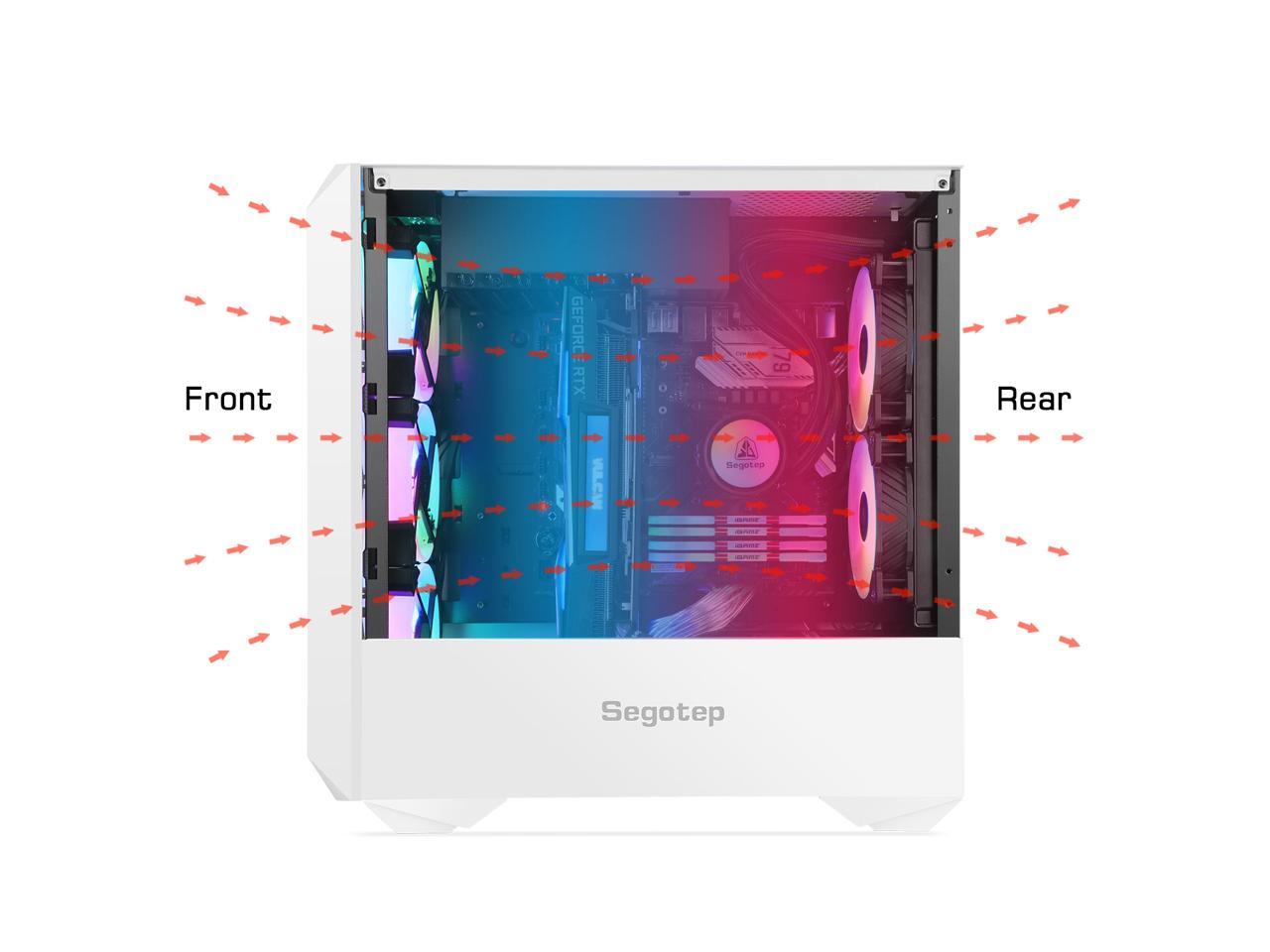 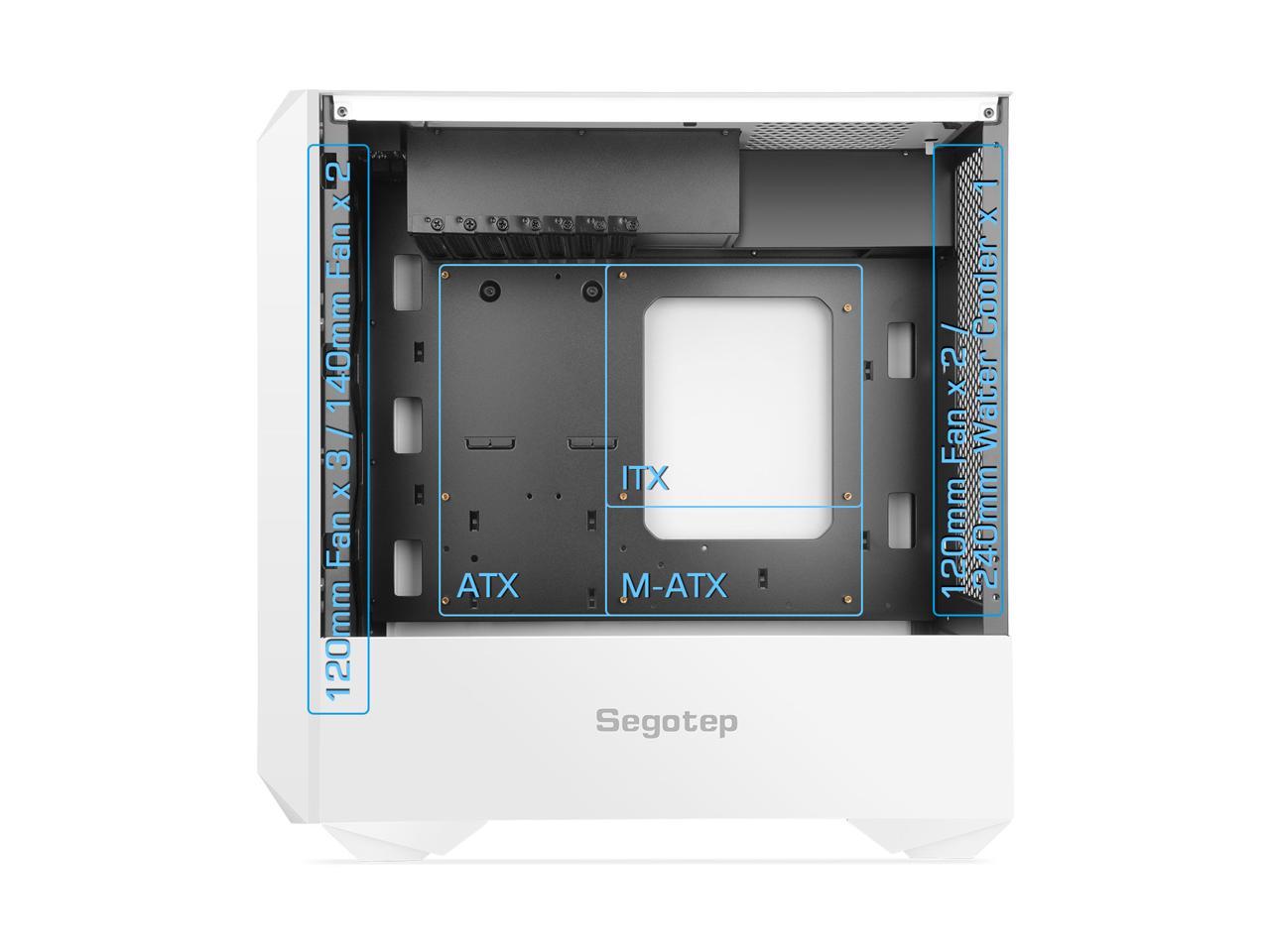 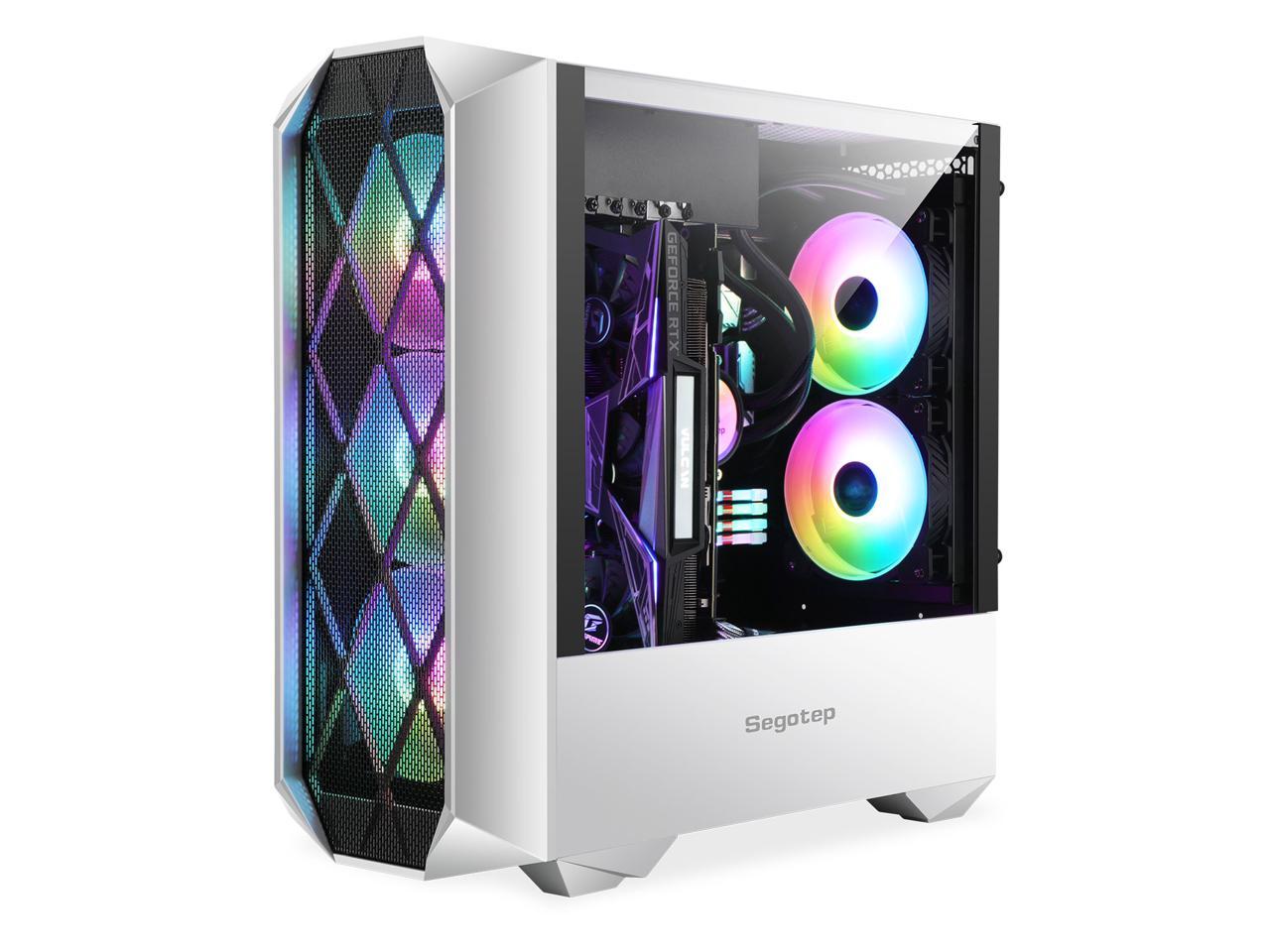 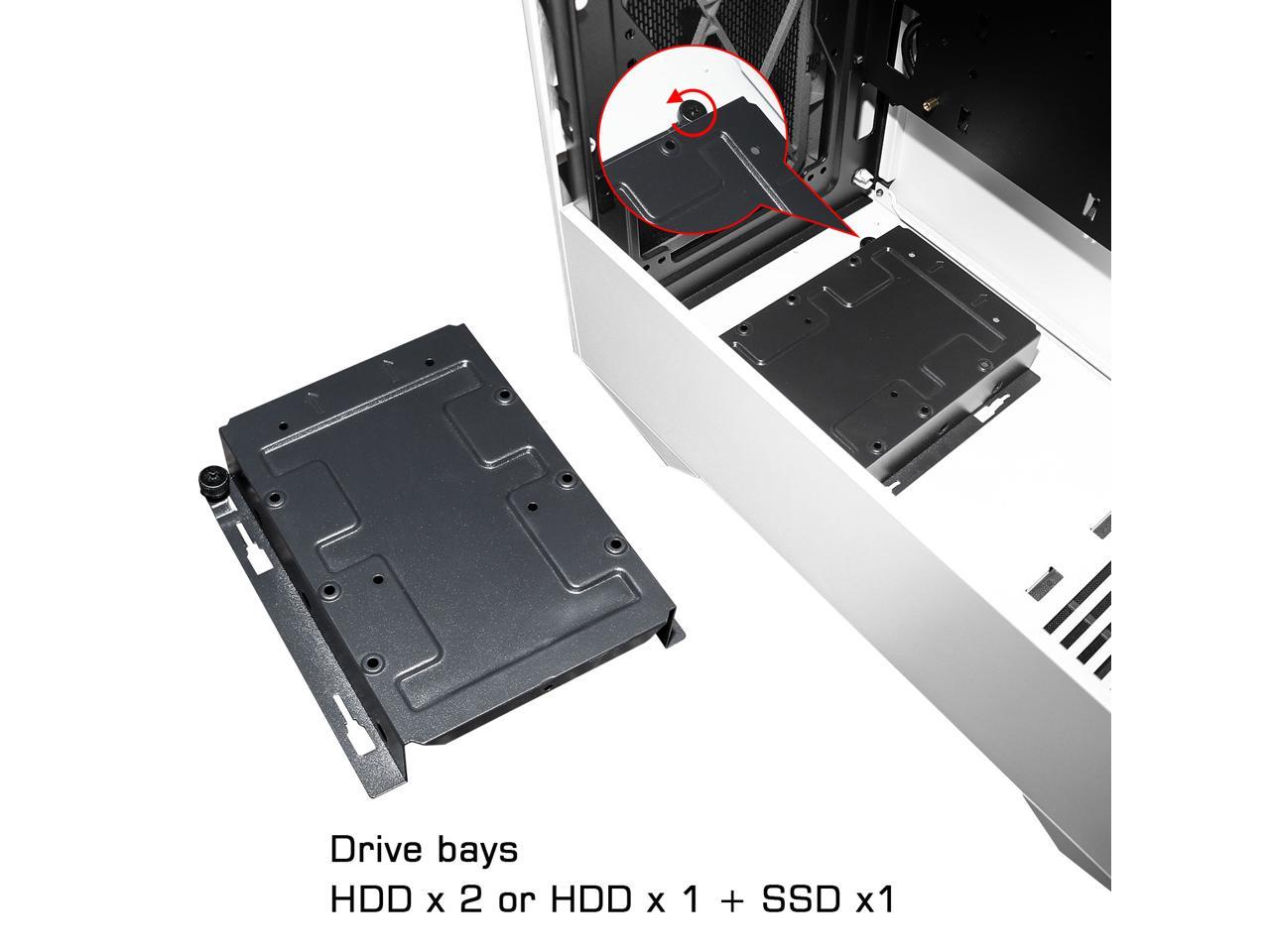 Pros: Great Looking case And design. Easy install on everything and very stealthy for hiding cables. Have plenty of room for my x570 board, 2 ssd's, rx5500 and a Darth Vader figure 10'', 5 fans running front to back keep my slightly overclocked ryzen 5 cool as a cucumber. Absolutely LOVE how the tempered glass window is on the right side of the case unlike 99% of the rest. I always have my tower on my left and can now finally indulge on the view. The easy access to cable on top is a major plus. Rgb controllers can now have that button controller within reach.

Cons: Only con IF YOU CALL IT that is making sure all peripherals have enough cord length. Little more of a stretch to run everything where you want them on your desk with having the extra foot or so of length to run up the back an over top the case. But I dont see a lot of people having this issue.

Overall Review: Highly recommend for those that like there Towers on the left side of there setups. Airflow is great. Quite for 5 fans 6 with cpu. Looks spectacular. Rgb settings are a plus but we all have controllers or software to make it even better. 5/5 all the way.

Overall Review: I would absolutely recommend this case if you're looking for a unique case. The front RGB panel looks awesome and is sure to look great in your set up. This case is easy to build in and I did not have a single issue with cable management, space issues, etc.

Pros: - One of the few inverted cases in the market allowing it to be placed in best "display" form on the left side of my desk - Also rotated so the back of the motherboard and expansion cards go to the top. This allows for graphics cards to be hung vertically, eliminating any GPU sag. - Airflow allows GPU direct access to fresh air. - Decent tie points on the back for routing wiring.

Cons: Mainly the fans: - The included case fans are molex-powered (no PWM or DC connection to the motherboard allowing for control and monitoring) - My own fans seems to be missing the connector for connecting the fans to an ARGB header on the board. - The fans don't remember their last setting when powered down; on starting up from off, or resuming after sleep, the fans will start in the default UBER BLINGY lighting pattern. I'll be replacing the fans because of the motherboard being unable to control their speeds. Other potential issues: - Fans + radiators on the back will make access to the holes for cabling a bit tricky. - Spacing is a bit tight if you have a large power supply; I installed my EVGA Supernova 1000 G2 PSU which is 200mm long; I had to remove the HD caddies on the bottom to have room for the extra cabling length for the motherboard and GPU power cabling.

Overall Review: Overall, if you're looking for an inverted and rotated case, I would recommend this one. If you don't, I would look at other cases. Some other interesting info: - The PowerColor RED DEVIL Radeon RX 6800 XT DirectX 12 Ultimate GPU just barely fits in here. Current, my system is running an old GTX 970, but if I can get another 6800 XT or a 3080 for my wife, I'll be bringing the PowerColor from her system into this setup. The case claims to allow for an up to 323mm card, the PowerColor is listed at 320mm. I'm not sure which is not accurate.

Cons: Box was messed up by ups. That happens. But nothing the seller could have done.

Pros: 1. Inverted layout. The GPU is mounted vertically, which relieves stress on the motherboard. I have my system on the left side of my desk, so this way I can see into the case since the window is on the right side. 2. Airflow seems decent - it basically flows straight from the front to the back. 3. Power supply is covered in an enclosure at the bottom of the case (which also has vents on top, if the power supply needs them). 4. Rubber grommets cover the cable passthroughs from the power supply. 5. All edges are either rolled or rounded so they are not sharp. 6. Panel screws are captured so they cannot fall out and get lost. 7. Both side panels are easy to remove - just unsrew, tilt out and pull away. 8. The tinted tempered glass is nice. 9. I like the RGB lighting on the front (it's a 5v, 3-pin ARGB so should be compatible with most motherboards and/or hubs, or you can use it stand alone and connect it to the case 'reset' switch to change the mode). 10. The top panel (which covers the I/O panel from the motherboard) is held down with magnets. 11. All inflow panels are covered by a removable dust cover (so, the front and under the power supply). The top panel also contains a mesh (so I guess it would also be considered a dust cover). 12. Front of case supports up to 3 120mm fans or 2 140mm. Back of case supports 2 120mm or 2 140mm. 13. There are plenty of cable tie down locations on the back of the motherboard tray.

Cons: (I only have minor complaints): 1. Does not come with any fans. You'll have to provide your own. 2. To control the front RGB you either have to use the case 'reset' switch or use a separate RGB hub (which is not provided). It would be nice if there was a dedicated switch on the case, instead of expecting you to use the reset switch (if you don't have a RGB hub). 3. I had a hard time finding a RGB hub which would work with the RGB lights on the front panel. I ended up using the hub which came with the Antec RGB fans. I tried two others and neither was able to light up the front. Not sure why. 4. The front panel, is fairly difficult to remove. I had to pull so hard that I was concerned it would break. A hinge and magnet clasps would be a better option. 5. There is only a single USB 3 slot on the case (in addition to two USB 2 and a single USB-C). One more USB 3 would be nice. 6. The hard drive activity light is built into the LED ring which is around the power button on the top of the case. I would prefer to have the hard drive activity LED be on the front of the case. 7. It would be nice if the side panels were attached by a lift away hinge, instead of the simple 'brackets' they have now. 8. The space for the power supply is a bit cramped. It can be a little tight fitting the cables in. 9. If you have a really long GPU it might not fit in the first PCI slot (because it would hang down and collide with the back side of the power supply enclosure). 10. I feel if they had made the case just 1/2" longer, issue 8 and 9 would go away. 11. Motherboard tray cannot be removed from the case (which, honestly, I would only expect from a more expensive case).

Overall Review: Overall I feel this case is an excellent buy - especially if you are in the market for an inverted case. I would definitely buy it again.

Pros: Vertical alignment makes component installation *much* easier. Top-oriented ports make for easy cable management for any TV/monitor/peripherals on a higher shelf or desk Included fans are whisper quiet Spacious enough for all the components most builds will need

Cons: Can be a bit tricky to get the hard drives wired up

Overall Review: Great case, highly recommended, and I do not want to build another system in the traditional orientation again after this.

Pros: Dropped my dual gpu temp by 10 degrees with only the 3 front fans installed

Cons: The supplies fans are 3 pin, and didn't connect to my MoBo

Overall Review: Greta cooling, but buy the bare case and supply your own fans

Pros: Looks great out of the box.

Overall Review: I received it in the mail. I opened the box and I noticed the front panel was crooked when I removed the foam. It looks like someone made a mistake before shipping the case. The front panel cover was not attached all the way when I took it out of the box. When I removed the plastic a few pieces that hold the front panel to the case fell out. It looks like someone forgot to put it on all the way before shipping and it took some damage along the way. The rear of the case, glass side, has an outward dent for where the bottom screw goes. This dent does not allow the glass panel to slide all the way forward. I'm still excited for the case. I'm just waiting on a replacement. Update: I received the replacement case within a couple weeks last year with 0 defects. Installation for the HDD with the Power Supply was a little tedious but not really a problem. I have now been using it for 7 months and have had 0 issues with it. I absolutely love the fact that my GPU is now vertically mounted and do not have to worry about GPU sag. Cabling being on top makes it easier to connect/disconnect peripherals if I just want to test something ( I migrate my keyboard often). I have 3 dogs and the front mesh I only have to clean twice so far though I do keep my office pretty clean. Stiff connection cables that go into the top can be an issue but all mine fit without severe bends.