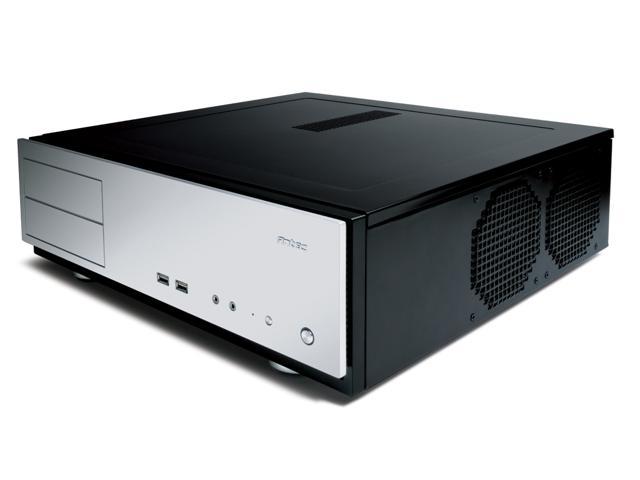 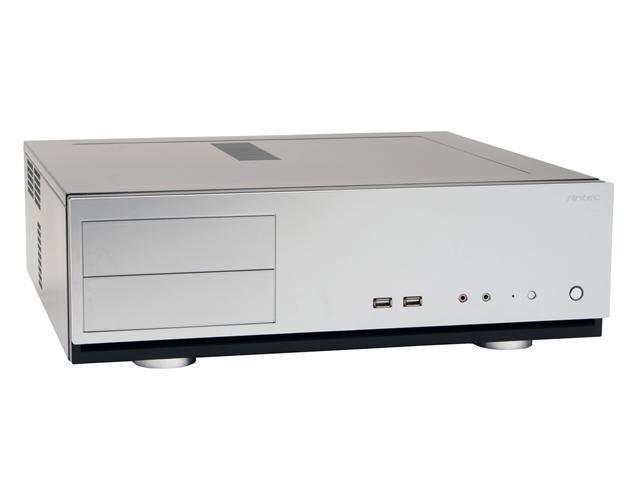 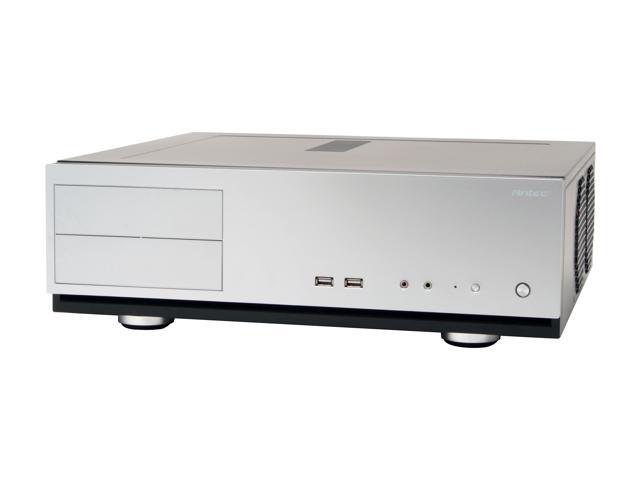 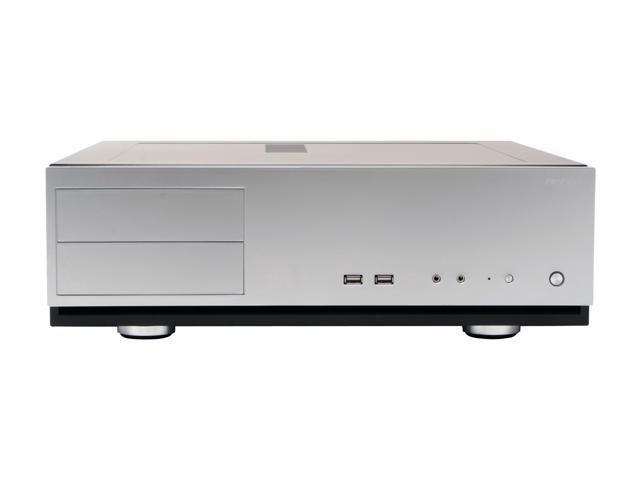 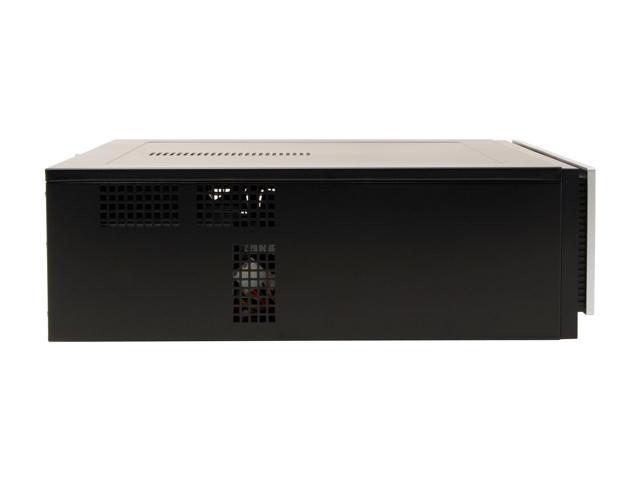 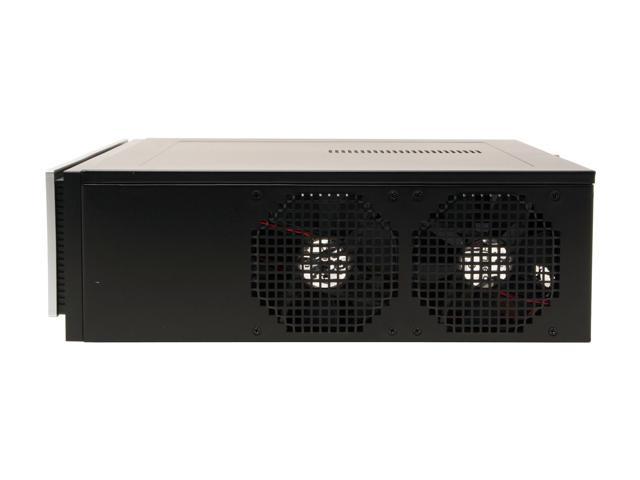 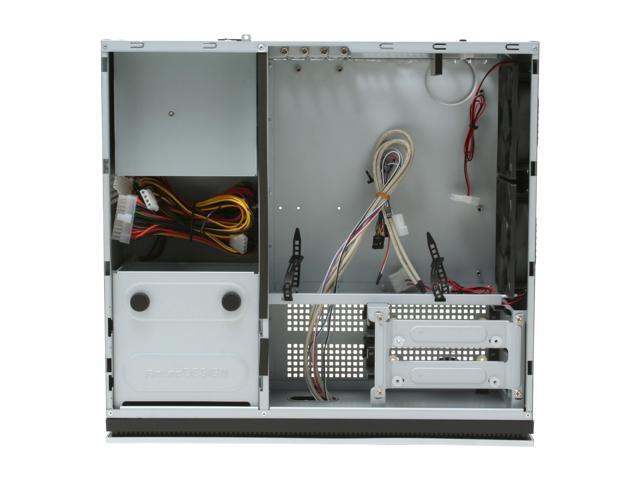 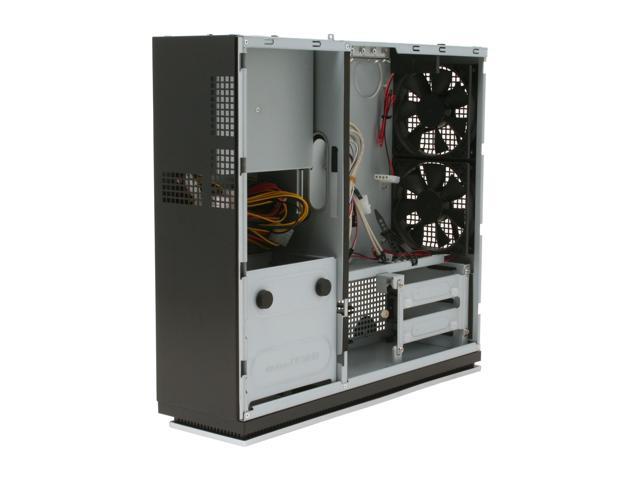 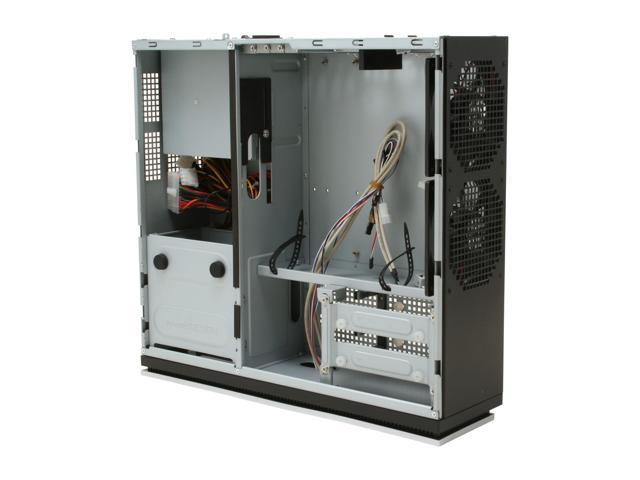 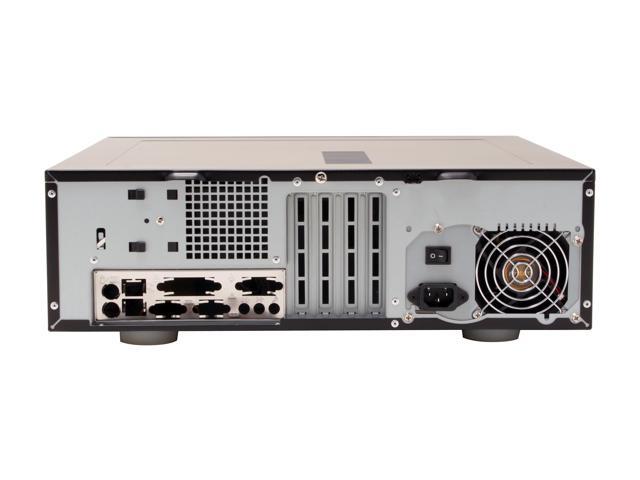 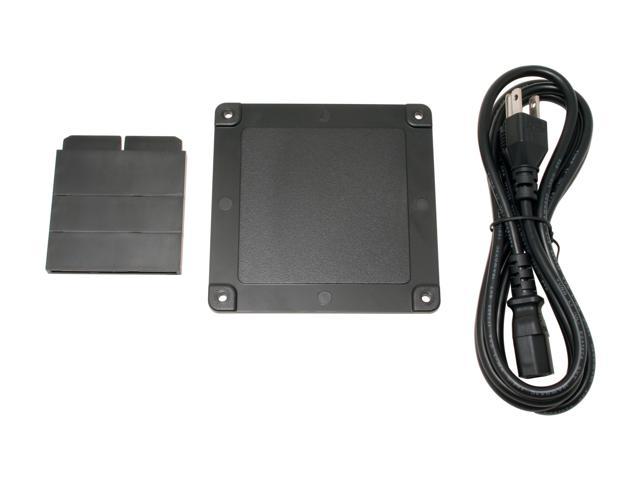 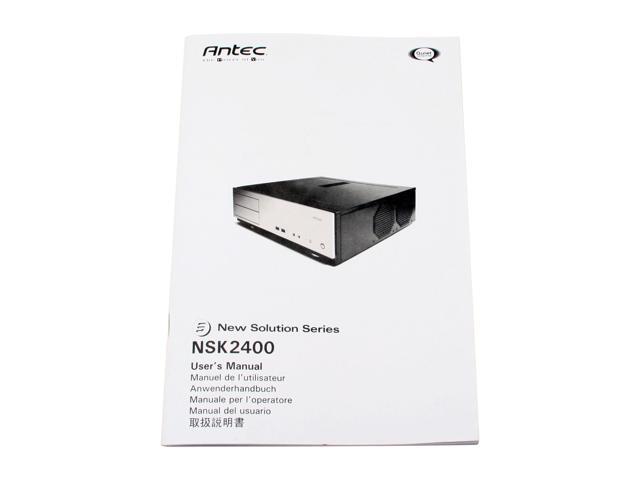 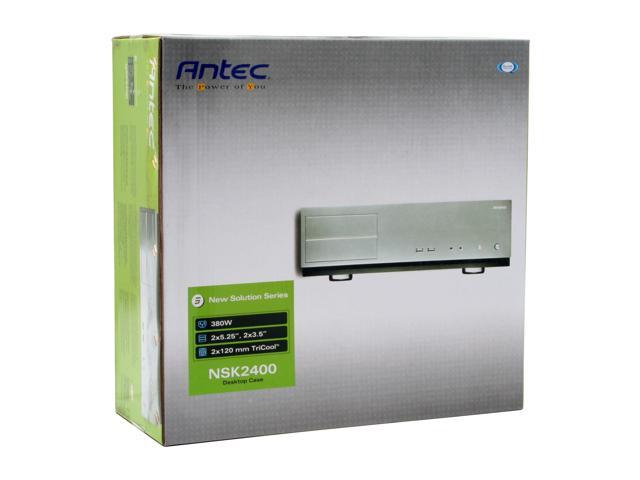 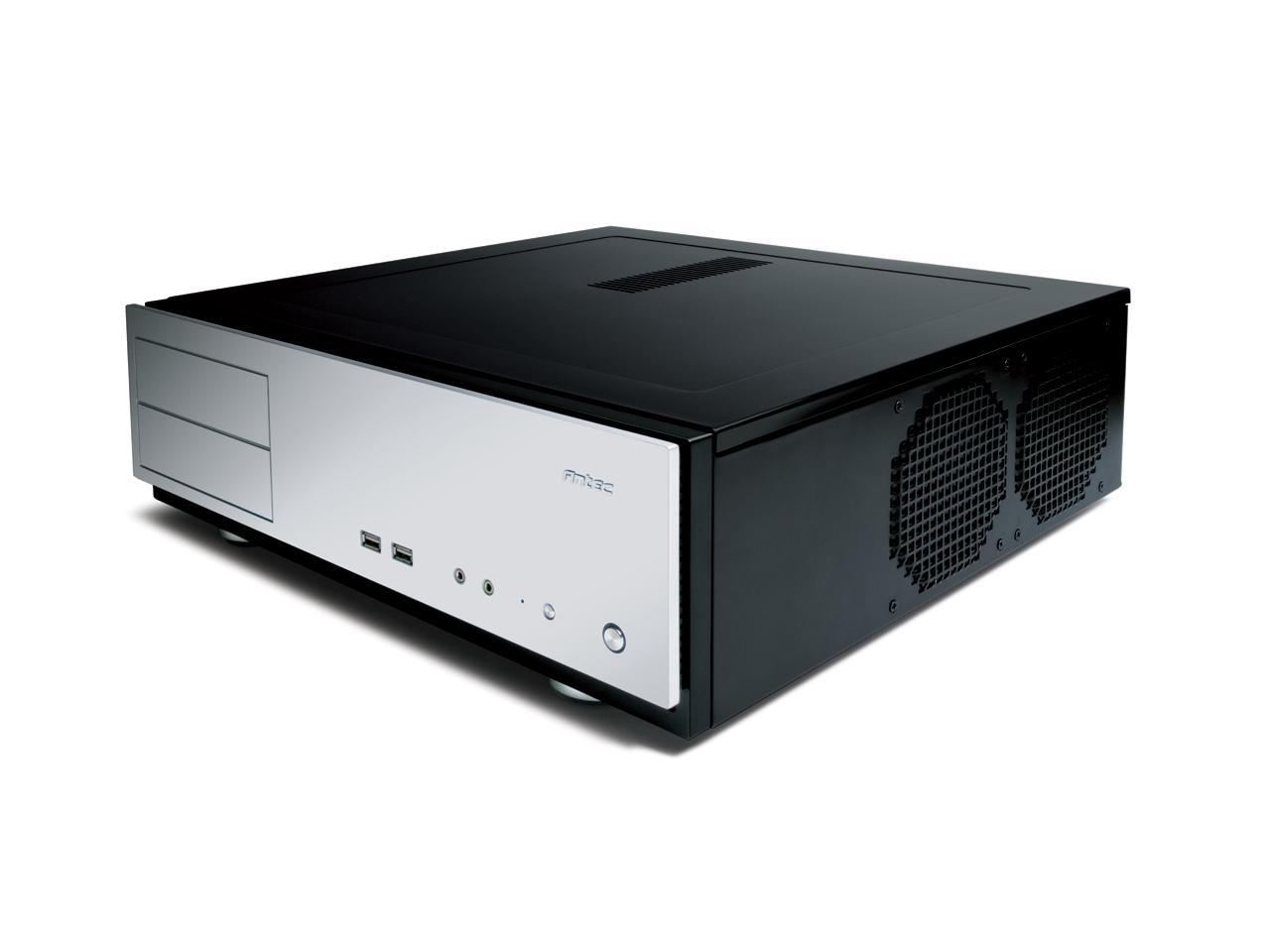 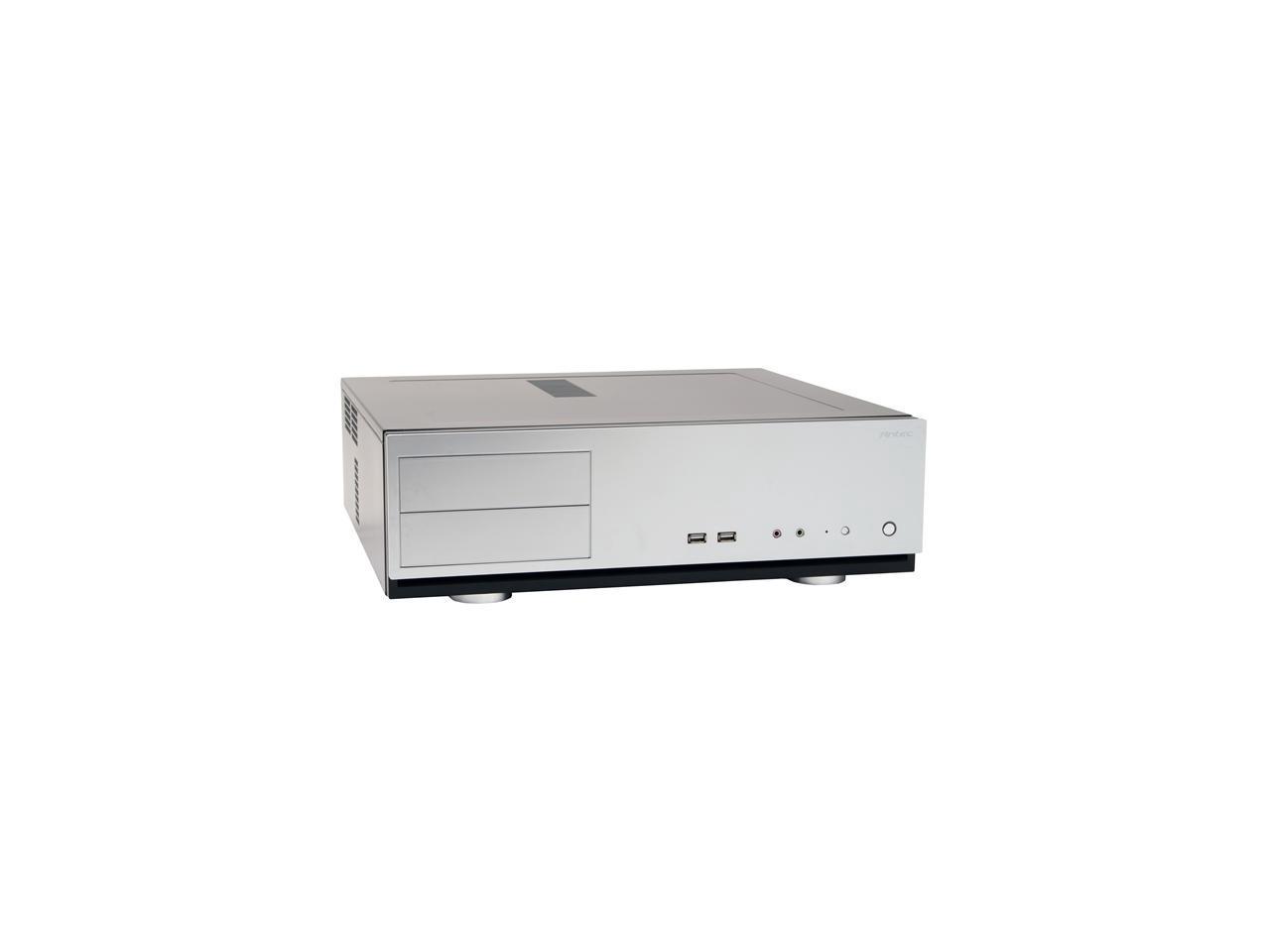 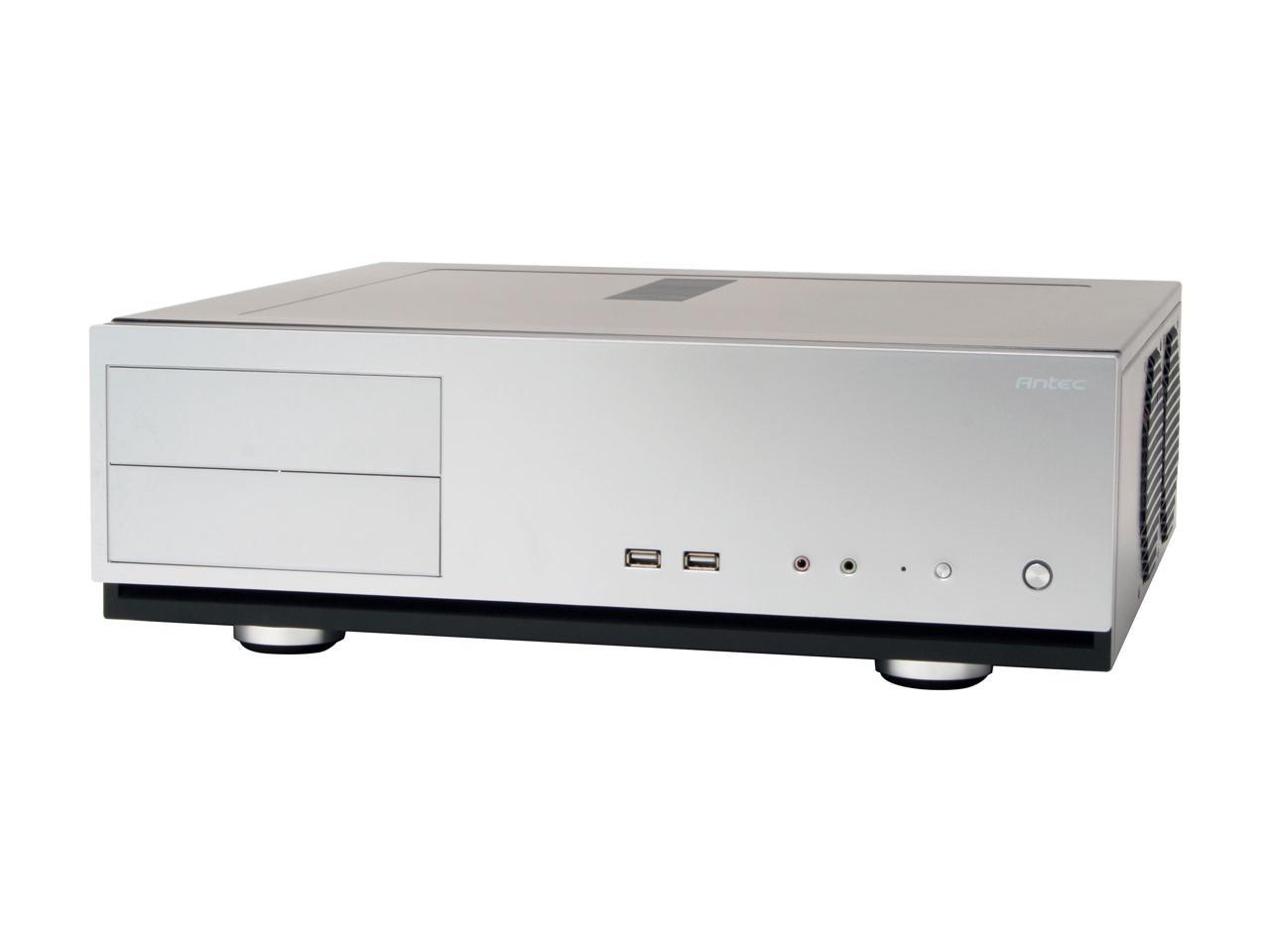 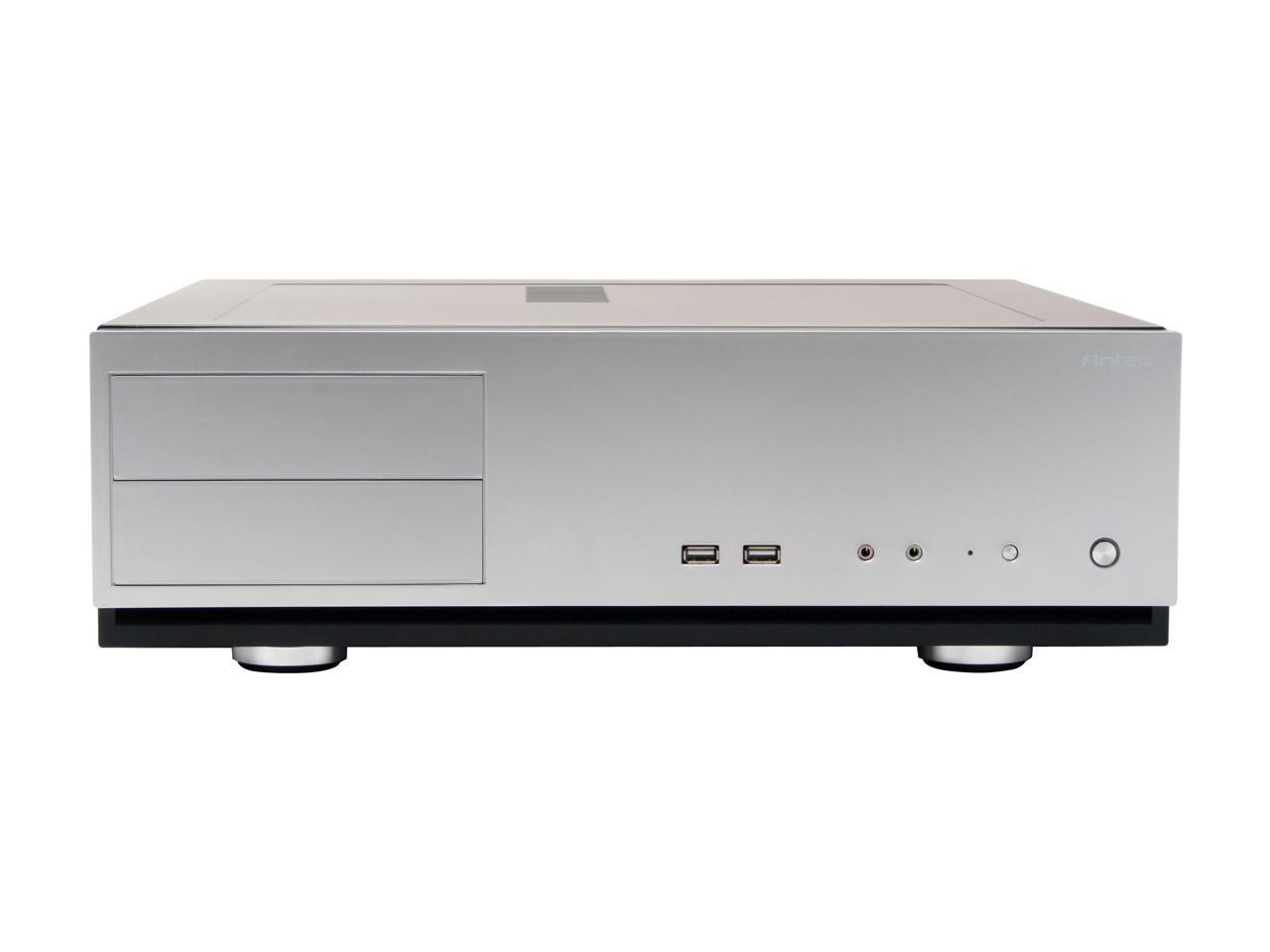 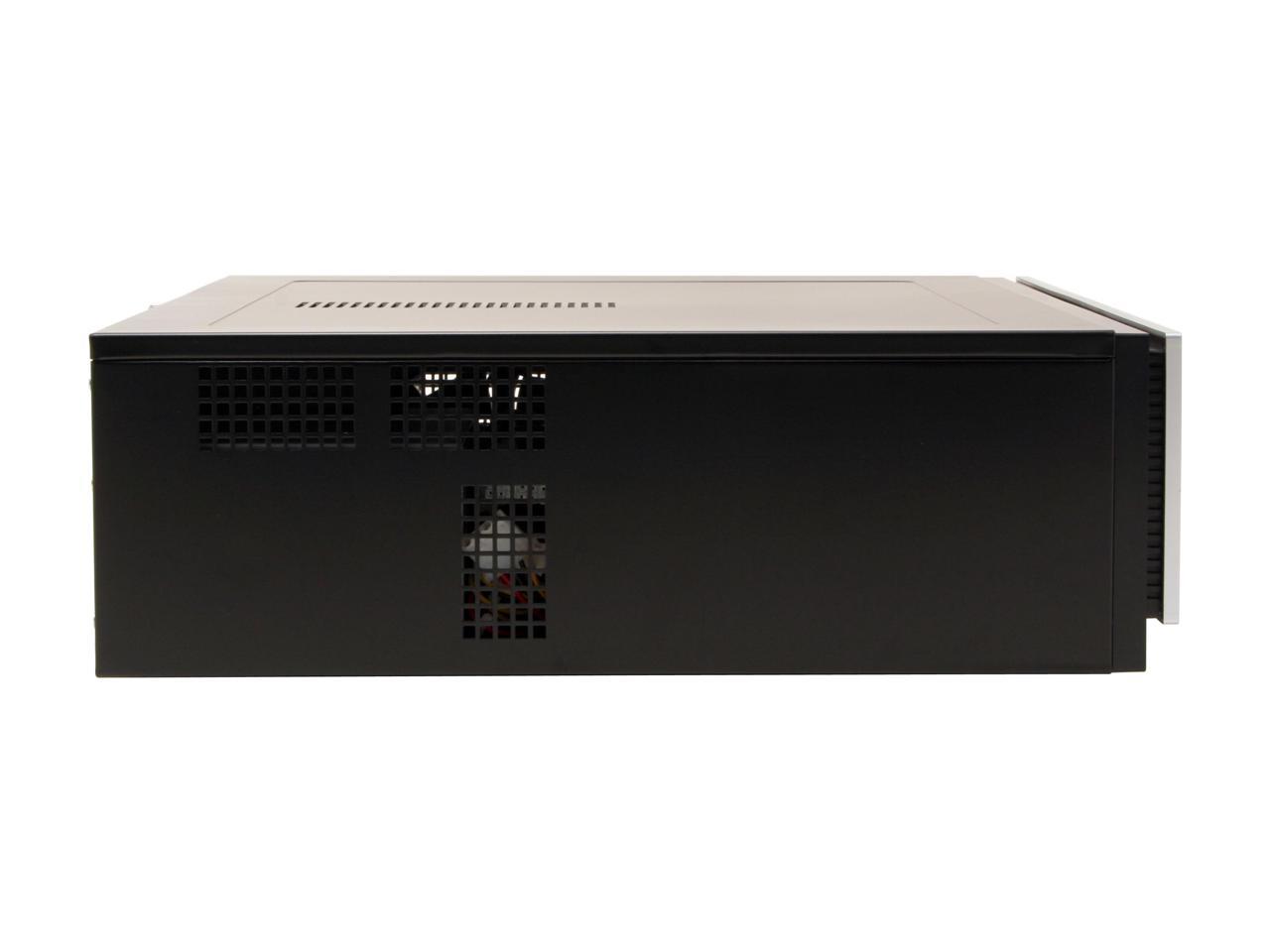 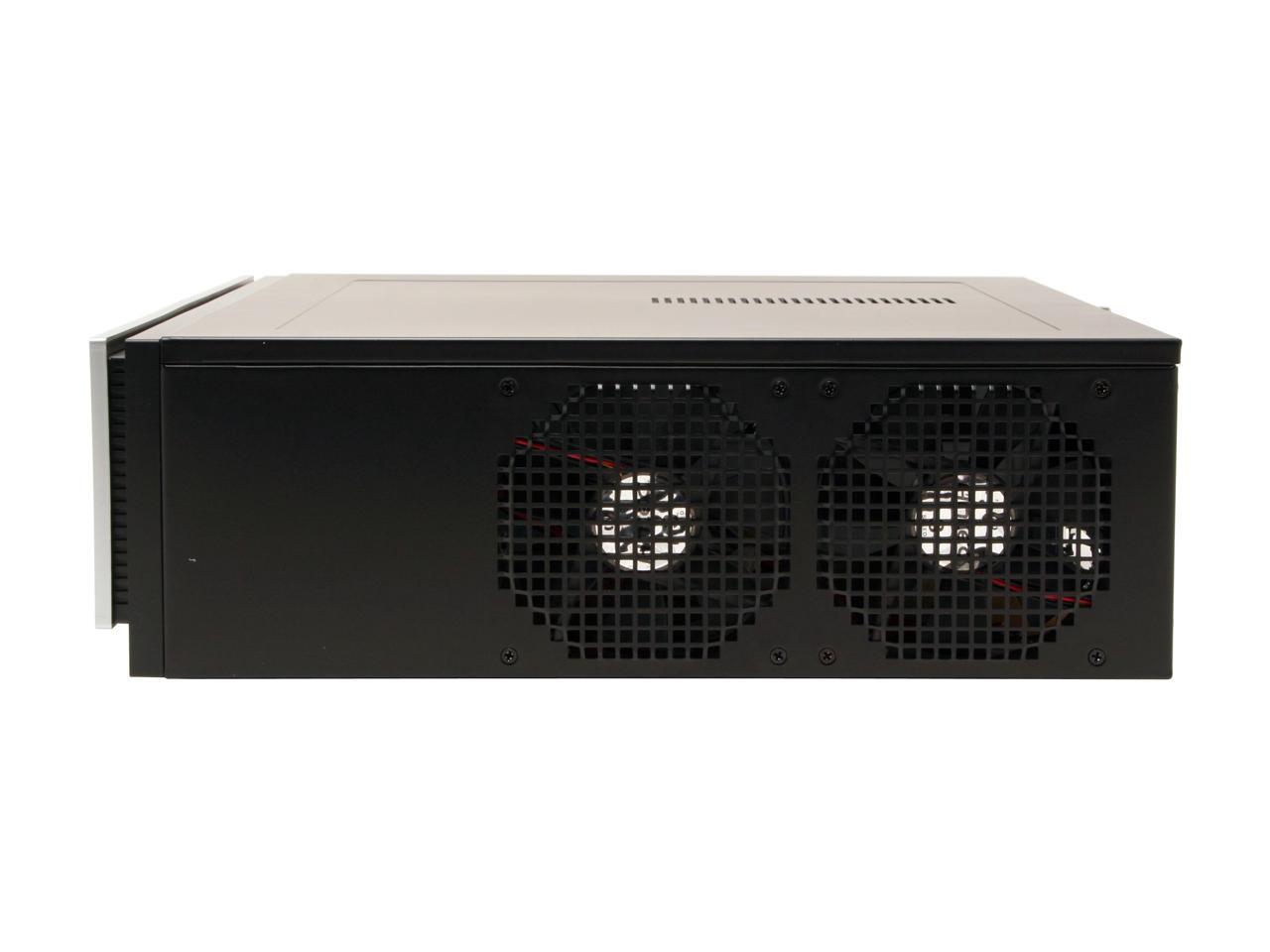 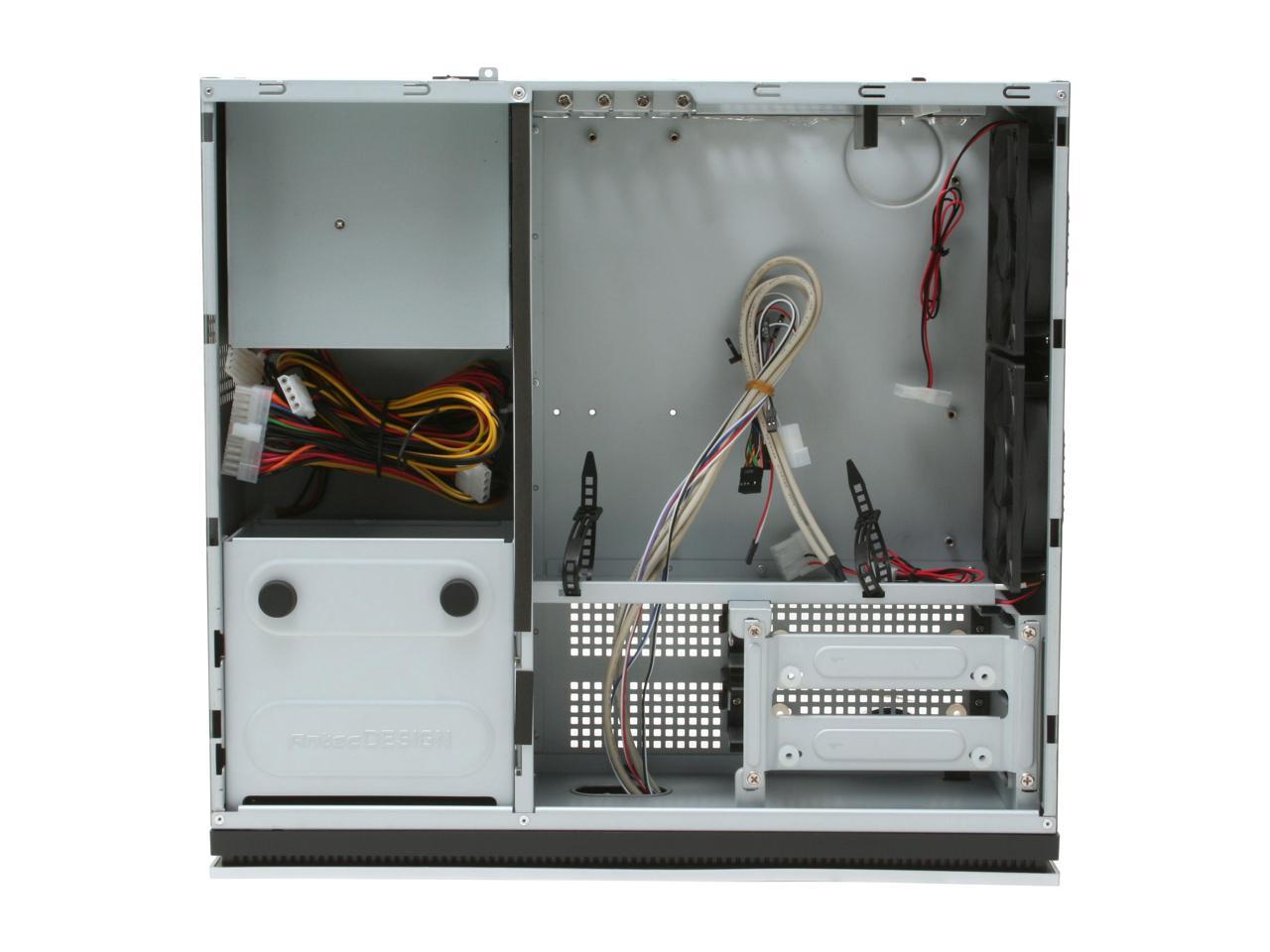 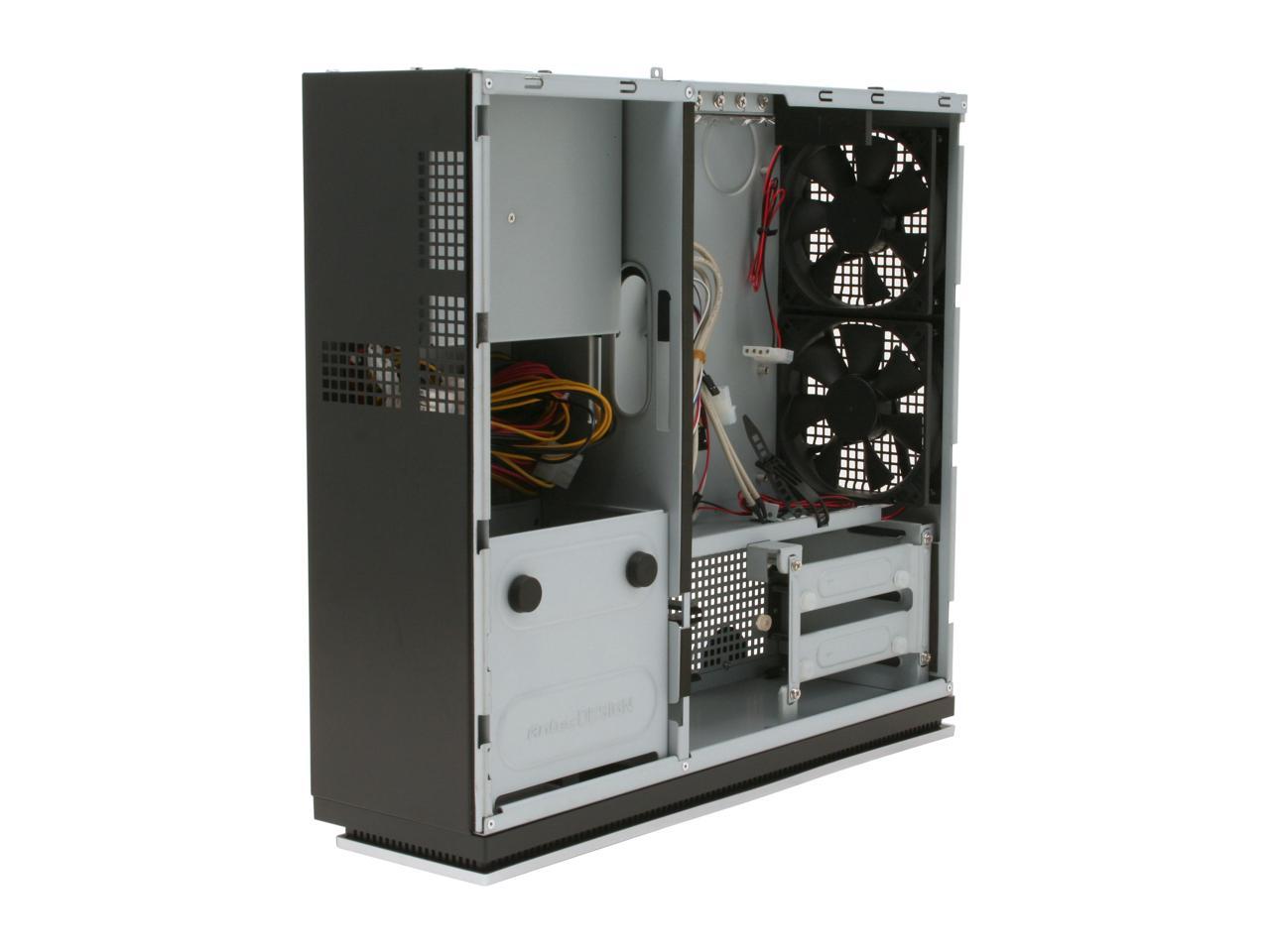 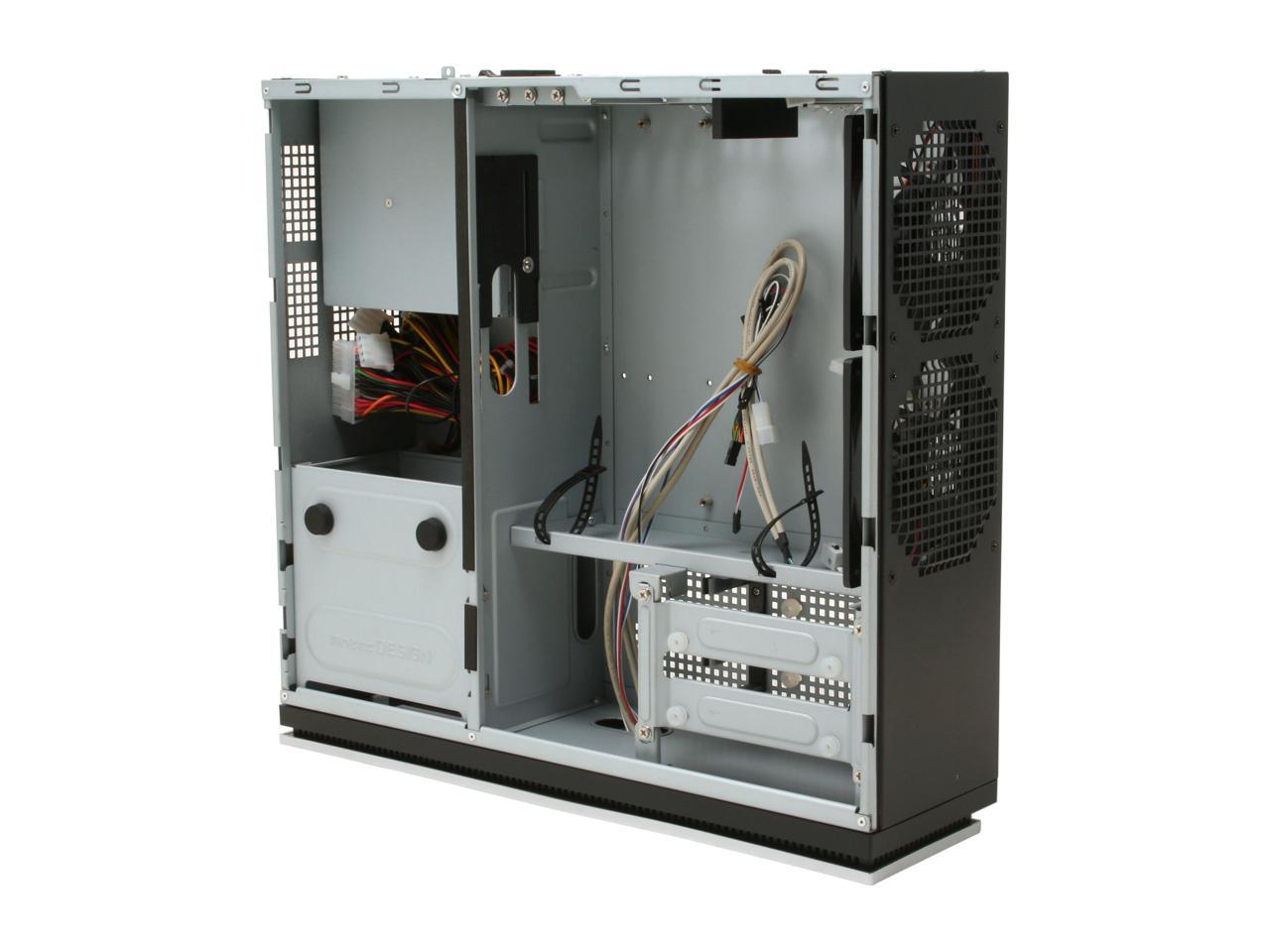 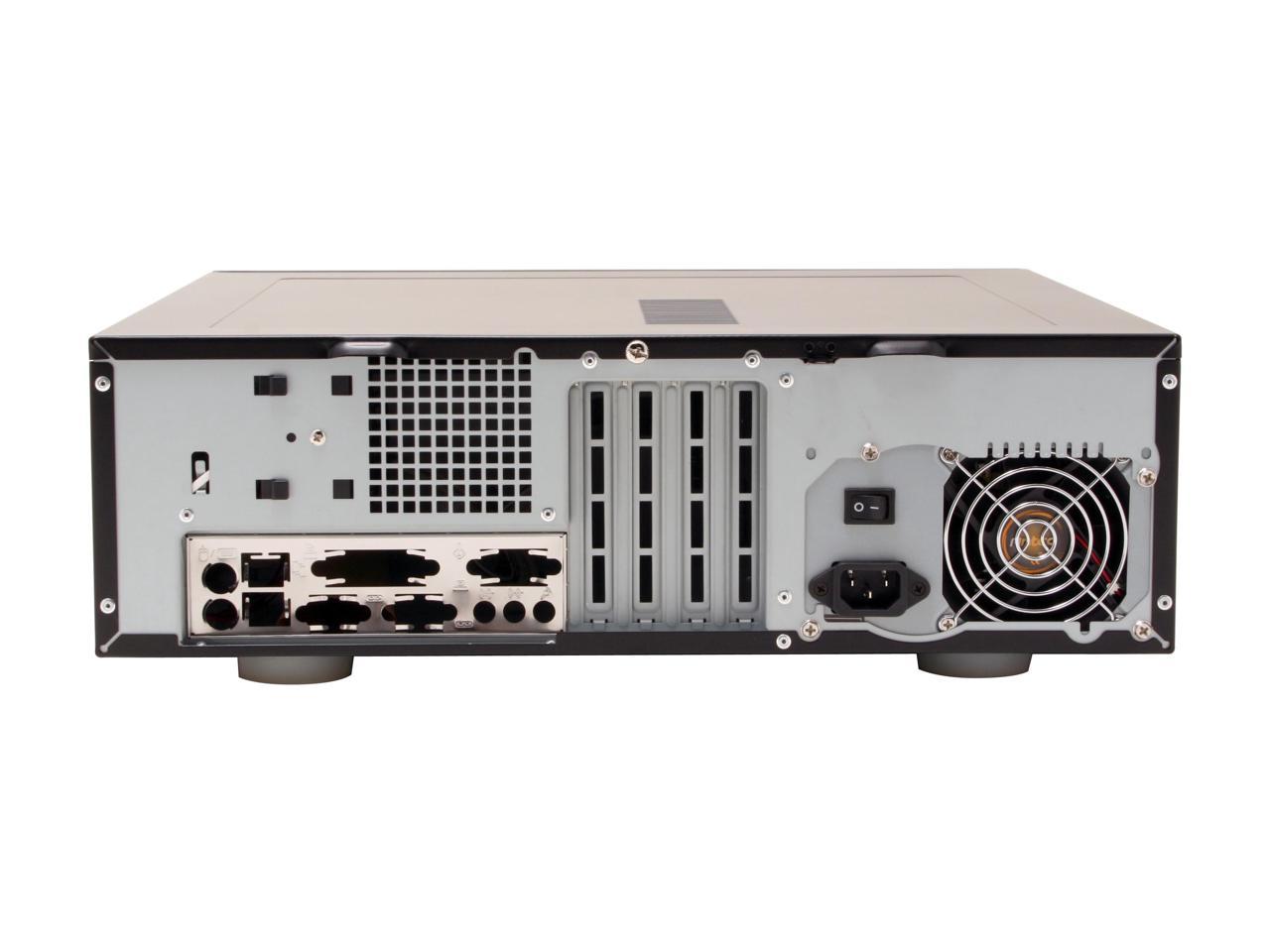 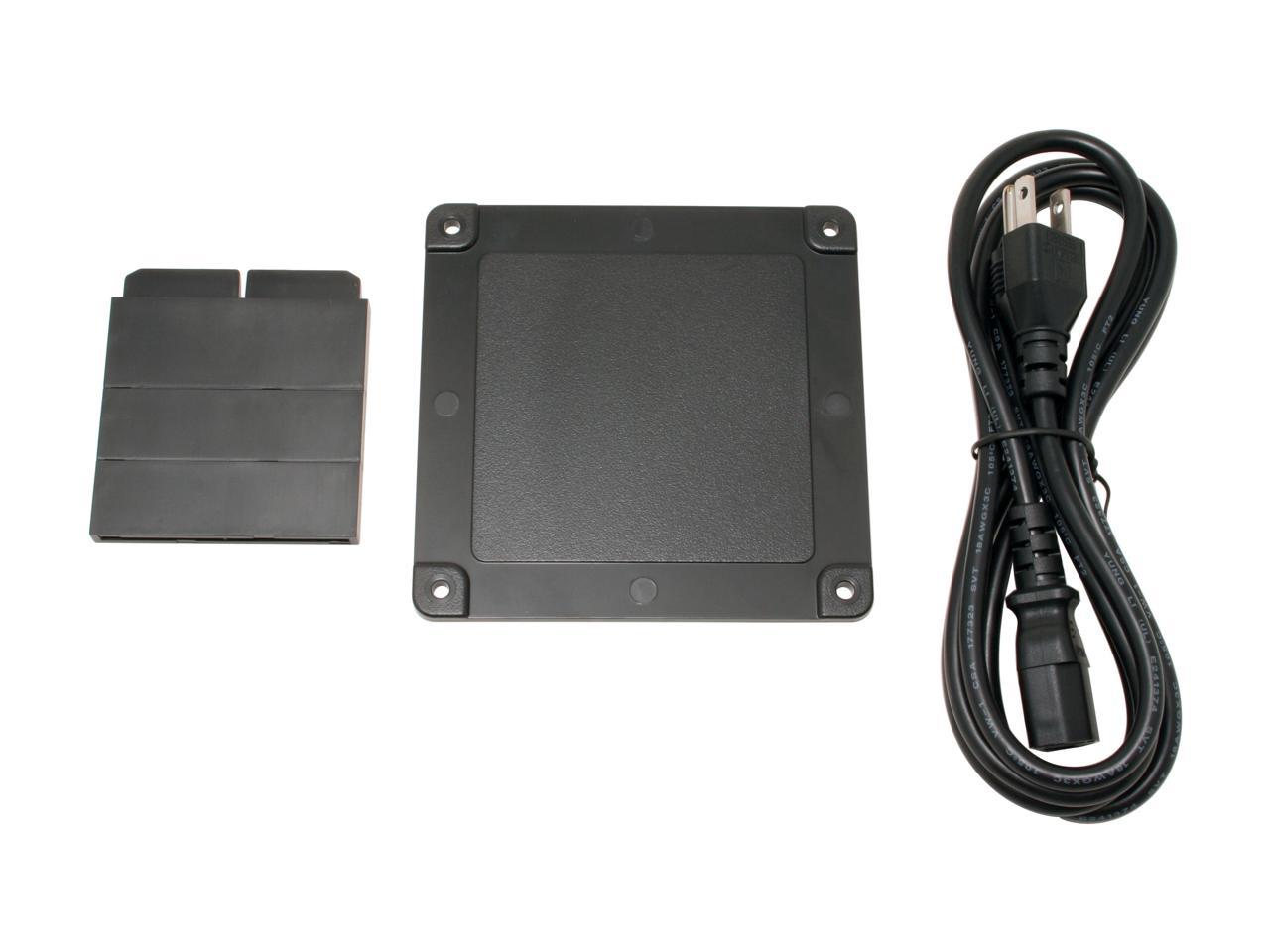 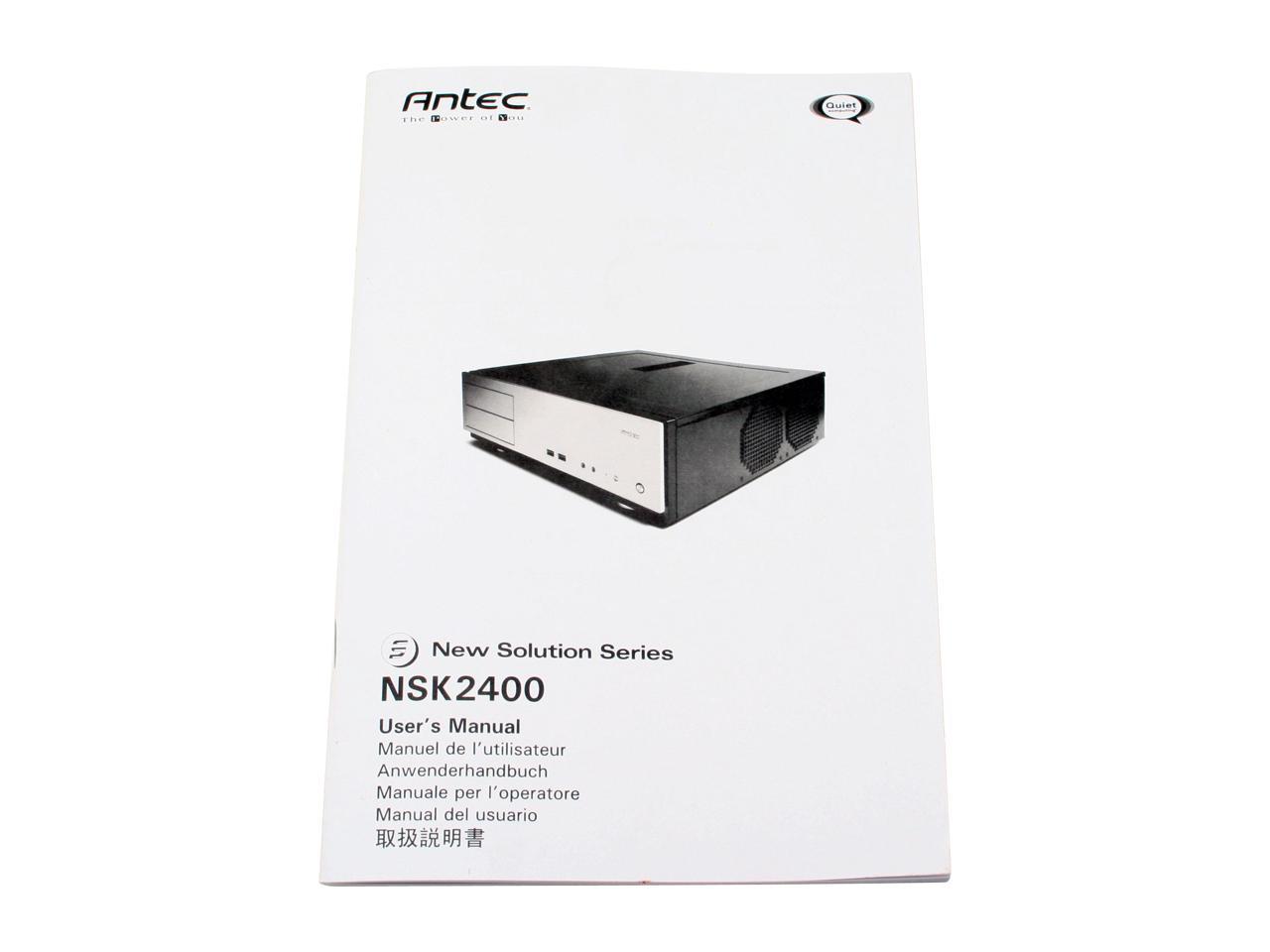 (105) Write a Review
OUT OF STOCK.
Overview
Specs
Reviews
Computers have become less about Word Processing, and more about a multimedia extravaganza in recent years. Antec has moved with the times and created the NSK2400. A return to the desktop style case makes it feel at home with the rest of your Multimedia components on your entertainment center. Simply install a TV Tuner card and you have the next level to entertainment technology! The case has a place for two DVD and/or Blu-ray disk drives to accommodate your Video collection. It also has room for two hard drives internally for any programs you wish to record, or videos and music you've downloaded or ripped.
For added convenience, there are two USB 2.0 ports and two audio Ports up front for easy access. Building a perfect entertainment machine is a hot proposition. To compensate, Antec has provided two 120mm fans in the side in perfect position to relieve your components. Welcome to the future of entertainment.

Learn more about the Antec NSK2400

Pros: Antec did a really good job with this case. As other reviewers have noted, it has great ventilation and controls heat well. Particular highlights include the ability to mount two hard drives on rubber mounts, the ability to mount a full sized uATX (MicroATX) motherboard, the ability to hold most full sized expansion cards, and room for two full sized CD/DVD drives. The case also uses a full sized PSU, and is drilled for either size up mounting of the PSU. Antec deserves special praise for this PSU mount, as it ensures that you can use your PSU’s bottom fan regardless of your screw pattern. And heck, the thing just looks good.

Cons: As others have noted, many of these cases have the power LEDs wired to a molex connecter. The power and hdd activity LEDs are also bright blue, which I hate. The case front is plastic, and seems a bit more prone to scratching than the usual beige or black fronts. Also, Antec left out a front FireWire port. The front USB board has the mounting pins for a FireWire plug, but it was left off. I can see no reason for its omission except to make more of a difference between this and the FUSION, which uses the same front port board as the NSK2400, only with the FW plug soldered on. The case is about 17.75” wide, so check your clearances before ordering if you are placing this in an equipment rack. And lastly, there is no floppy bay, so if you want a floppy, you will have to get a 5-1/4” to 3-1/2” mount. Good luck finding one in silver. I used a black faced one along with a black faced DVD drive and I think it looks good, but others may disagree.

Overall Review: If you know a bit about wiring, you can replace the bright blue LED’s with red ones. Standard 5mm LEDs will fit in the power button’s LED holder (it takes two LEDs). The HDD activity LED is custom shaped, but the chassy mounting hole it projects through will take a standard 5mm LED clip. You can remove the custom LED and clip in a standard 5mm one. It will just fit behind the front facing and it looks and works great. The PSU is also of questionable quality. I wish Antec would sell this case without the included PSU, as most of us are probably going to replace it with a preferred favorite anyway. In my opinion, a black faced NSK2400 with the front FW port included, no included PSU, and red LEDs would be the perfect HTPC case. Even so, this is a great (if large) uATX case and I feel it was well worth the money.

Pros: Very quiet, the inside is paritioned into three areas to help block noise. Extremely quiet power supply, suprising efficiency and active PFC for a "thrown in" PS. Silicone grommets for mouting the hard drives, I can barely hear an anti-virus scan. 120mm case fans have a high/med/low switch, are quiet on low and still move lots of air - low is 1200 RPM btw. Well laid out - for example the hard drives are in a chamber that's right by where the SATA /IDE connectors typically are on a microatx motherboard. Power cables have a sensible length, for example there is a short power cable for the optical drives right near the power supply and the SATA power connectors are just long enough to go to the - you guessed it, hard drive cage.

Cons: A little bigger than I expected for a microAtx case, but it's really about as small as you could ever get if you want two optical drives and two internal hard drives (like I do). The steel is by no means flimsy but if I had my druthers I would pay an extra ten bucks for a little thicker case.

Overall Review: I got this for a media center PC, trying to be extra quiet. SAMSUNG SpinPoint P Series are super quiet and don't get hot. I'm using an AMD 4400+, suprised by the quality of the retail AMD heatsink (4 copper heat pipes?? Sweet!) but the only fan I can really hear in this system is the retail AMD fan. My motherboard can adjust the CPU fan down (from 2300 to 1300 rpm) but I can still hear it. Wondering whether to replace the AMD heatsink fan with a quieter one or just getting a new heatsink ...

Pros: QUIET !! I have an MSI K8NGM2-FID w/ Opteron 146 OC'd to 2.5 GHZ and I have to get within a foot to hear any noise. The HDD mounting systen is very simple and effective. Drives mount vertically from two screws that go thru silicon grommets. The optical drive mounting system is also very straightforward. Tilt up removable drive cage , insert drive into cage with a couple of screws , pop off a face plate , reinsert cage , plug in two cables -- DONE.

Cons: Miswired reset switch. It was terminated with a standard Molex connector instead of the usual tiny connector.

Overall Review: Very high quality construction --all rounded edges and uses heavy gauge steel. The power supply seems to be a bit of a mystery. The good folks over @ Silent PC Review are speculating that is a Seasonic.

Cons: Power supply is a little weak, also would have preferred a TruePower (although it is standard size, so it would be easy to replace.)

Overall Review: This case looks really good. It's a flat black (not the piano black like the Sonata). The fans are really quiet at low speed--if my video card fan wasn't so loud, my PC would be nearly silent. I would recommend a fanless video card for this case--the ventilation is definitely up to it. The case is pretty big, but due to the way it's laid out, it still can only hold a micro-ATX motherboard.

Pros: Superior Case for desktops. Cable management is perfect. Sound is minimal, although I have a high pitch noise from power supply. Very cool, with a Conroe Duo 1.8, 2GB of Mushkin, 2 HDD and 2 optical drives.

Overall Review: The only case I have really liked over the past 5 years. Very pleased.

Cons: -Power LED consumes a molex connector without pass through -Routing IDE cables to the external 5.25" bay might be challenging for some mobo layouts -No front firewire

Overall Review: As with other Antec cases I’ve used, the design of the NSK2400 was thoughtful and complete. In past desktop form factor cases I’ve built for, getting the external drive fronts to be flush with the case was challenging, frequently involving rails. Antec’s solution to this with a screwless lift out cage was an unexpected refinement. I am using this box for a diskless HTPC font end and even with the PSU fan, CPU fan and two 120mm case fans (running at "low") the machine is very quiet. This case is much cheaper than others suited for HTPC use (partly due to the lack of any display or volume controls on the face) and for me offers the best value over other cases in this category.

Pros: This Antec case is exactly what I was hoping for - a great HTPC case with very good ariflow and is whisper quiet. The designers of this case really put some good thought into it. I am running a Intel Core 2 DUO E4300 at ~35 degrees C. The system runs great and this case looks very nice as part of the Home Theater.

Cons: Would have liked it to have been a little bit less deep (had to modify the entertainment unit to accomodate), however I knew that when I bought it.

Overall Review: Great case. I would recommend this to anyone building an HTPC that can accommodate the space it requires. It runs cool and quiet. I am using two Hauppauge PVR 150's, a Silicondust HDHR QA Tuner, and a Foxconn uATX G965 MB. I also bought the silver faced Asus DVD drive to match the front of the case. Looks like it belongs there and it also runs very quietly. As usual, Newegg delivered everything on time, without error, and without any damage.

Pros: Very easy case to work within! Plenty of room to manuver. Both fans have intensity switches, allowing you to leave them on "low" and keep 'em quiet, or bump them up should you run into cooling issues. All compartments are very logicaly laid out, and keeping the cord clutter down is a breaze. Hard drives mount on rubber shock absorbers and stay out of the way. Power supply seems to handle everything a HTPC would use, with no complaints.

Cons: None! This case is a joy to work with. I'd highly recommend it to anyone thinking about building either a Home Theater PC or a light-duty desktop.

Overall Review: Antek cases have by and large been the best compromise between cost and quality that I've run into. These guys seem to understand what makes a PC tick! There certainly are cheaper cases out there, but the money you save usually isn't worth the extra headaches.