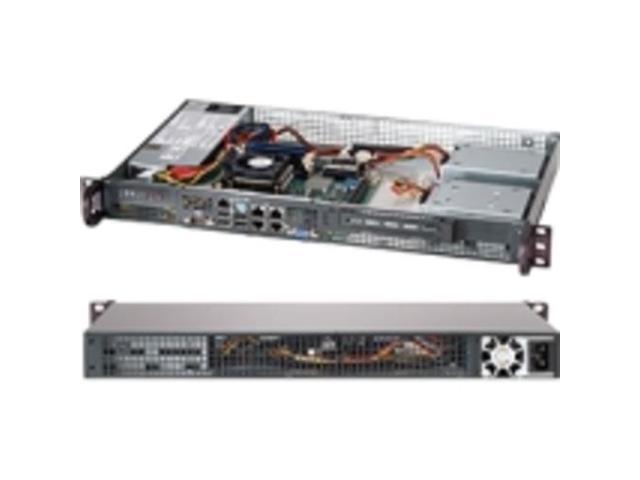 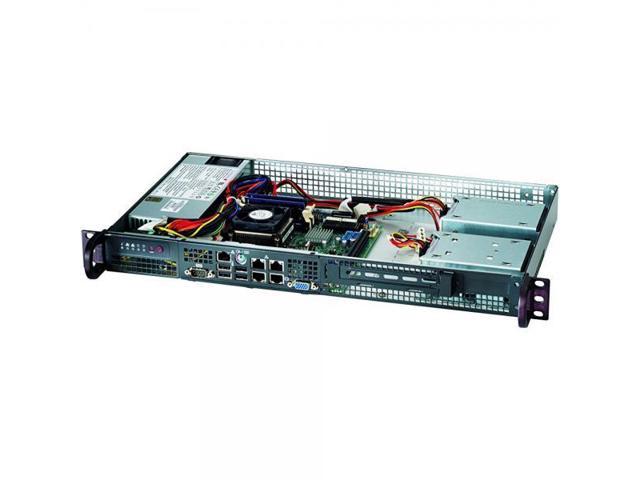 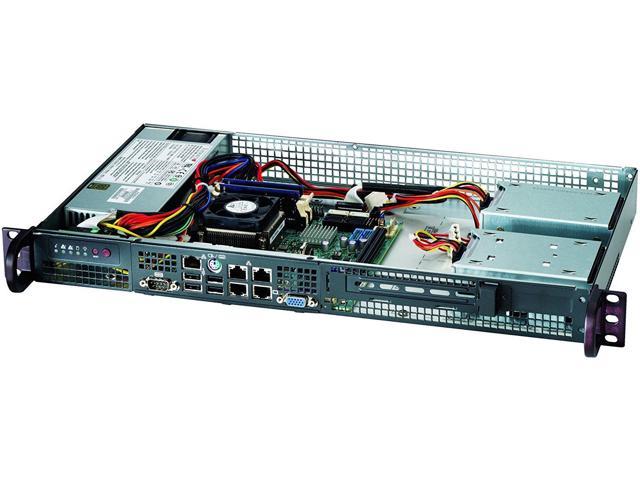 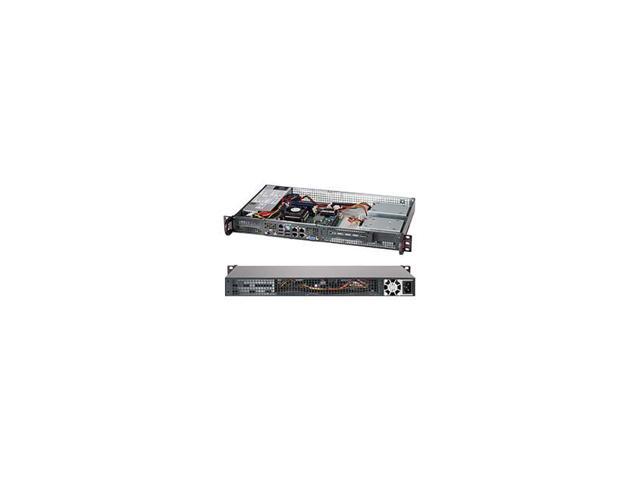 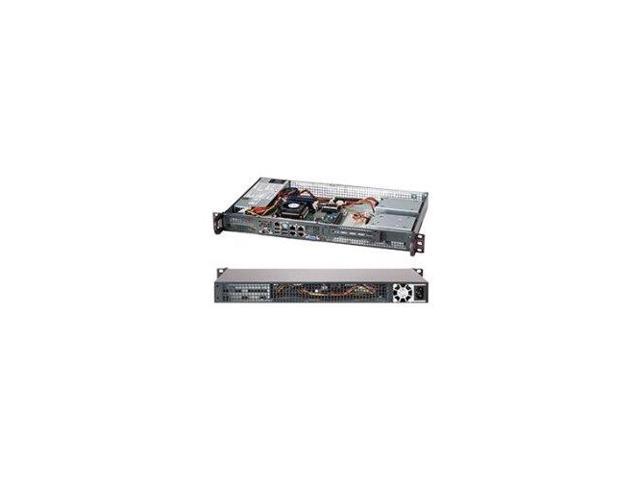 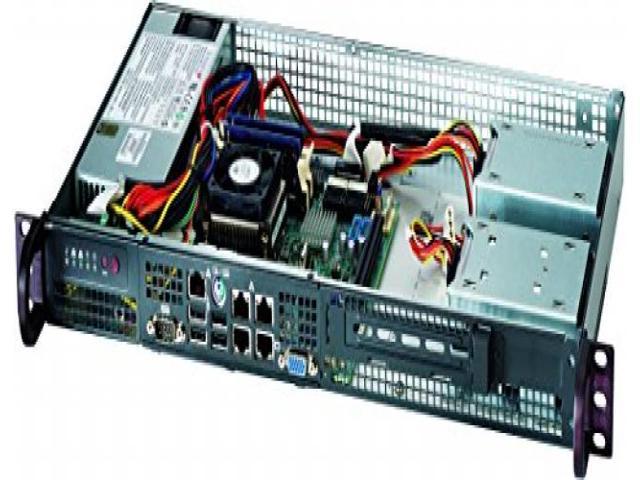 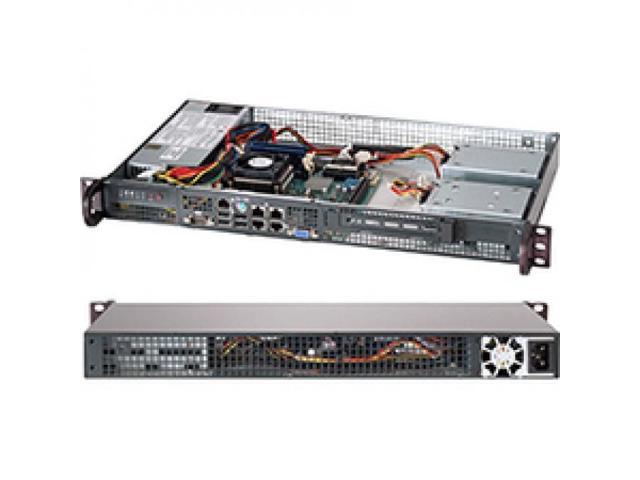 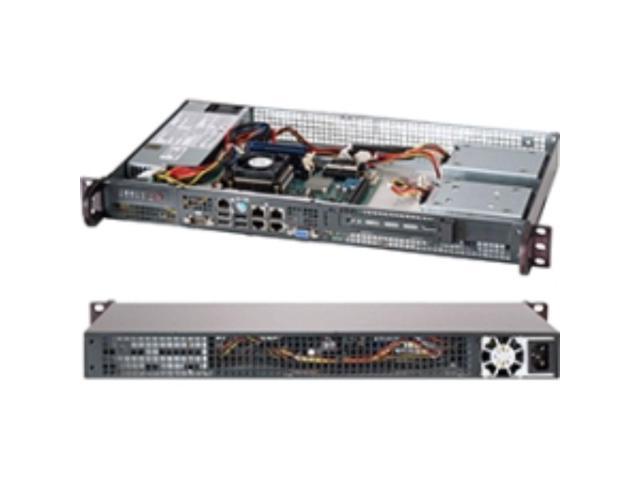 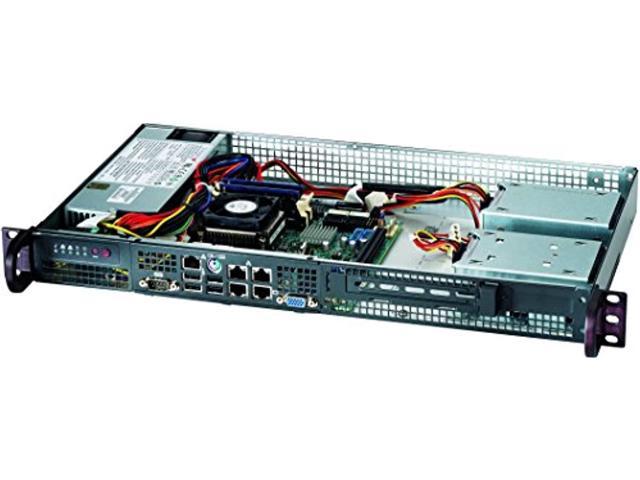 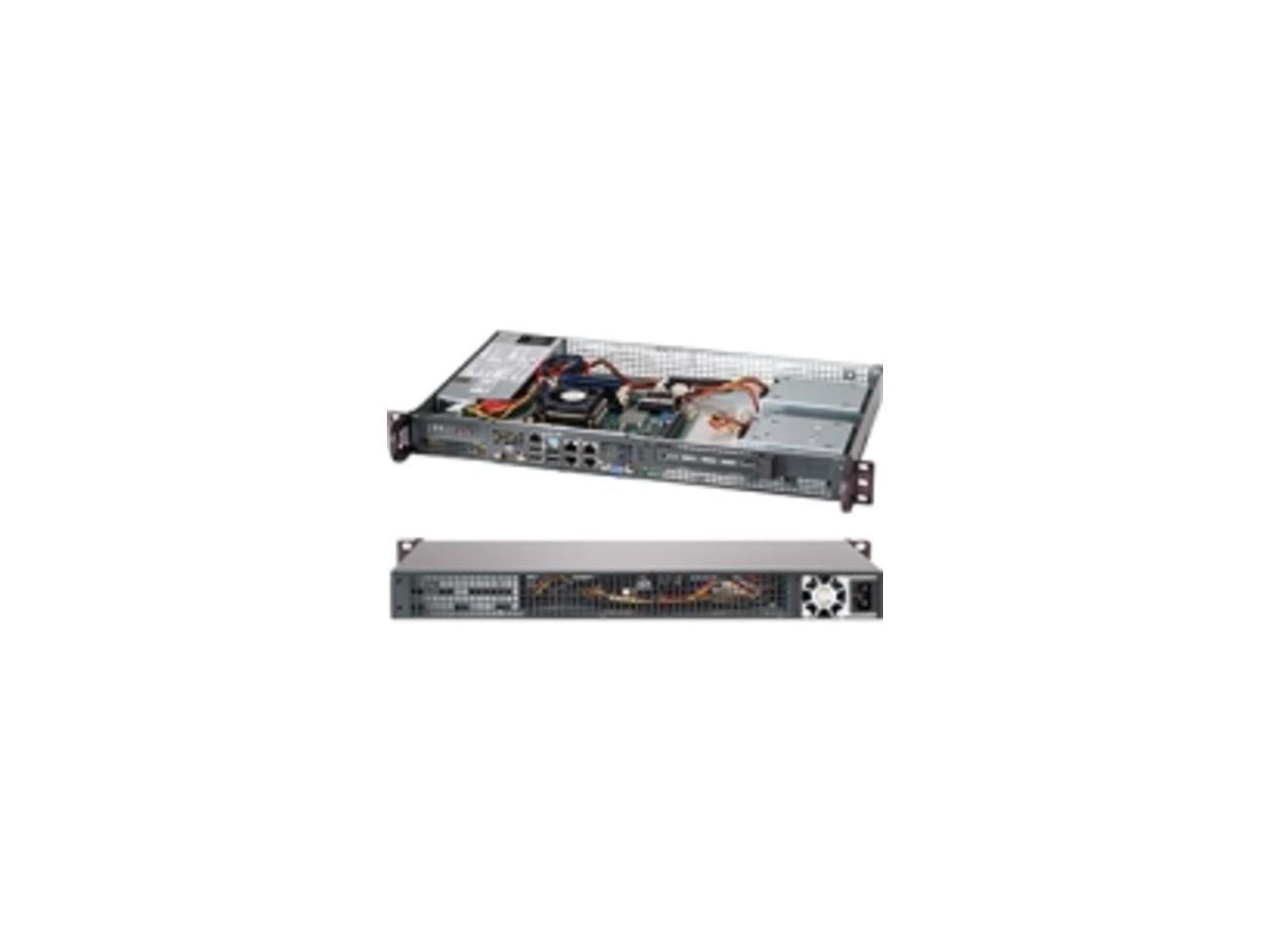 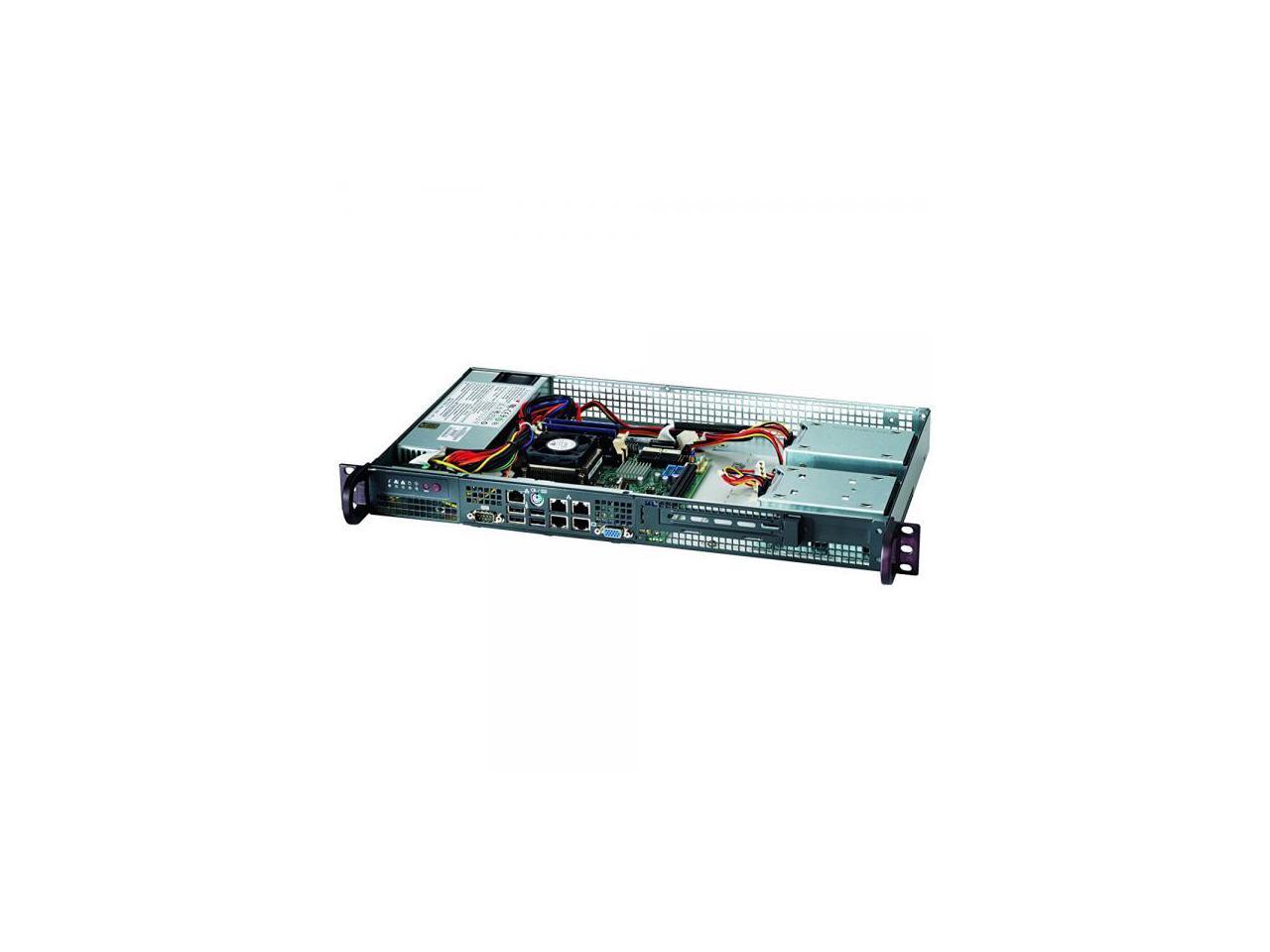 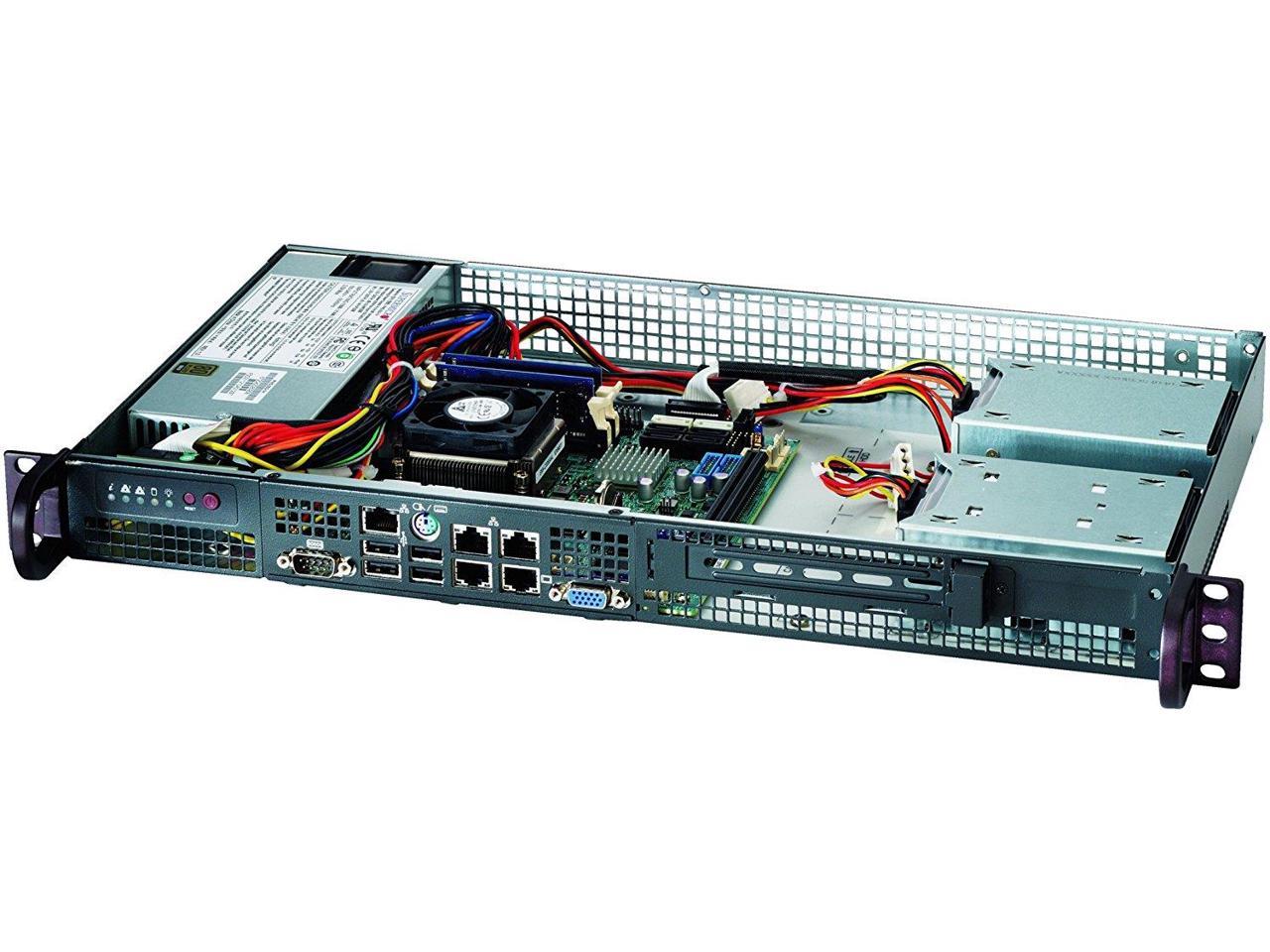 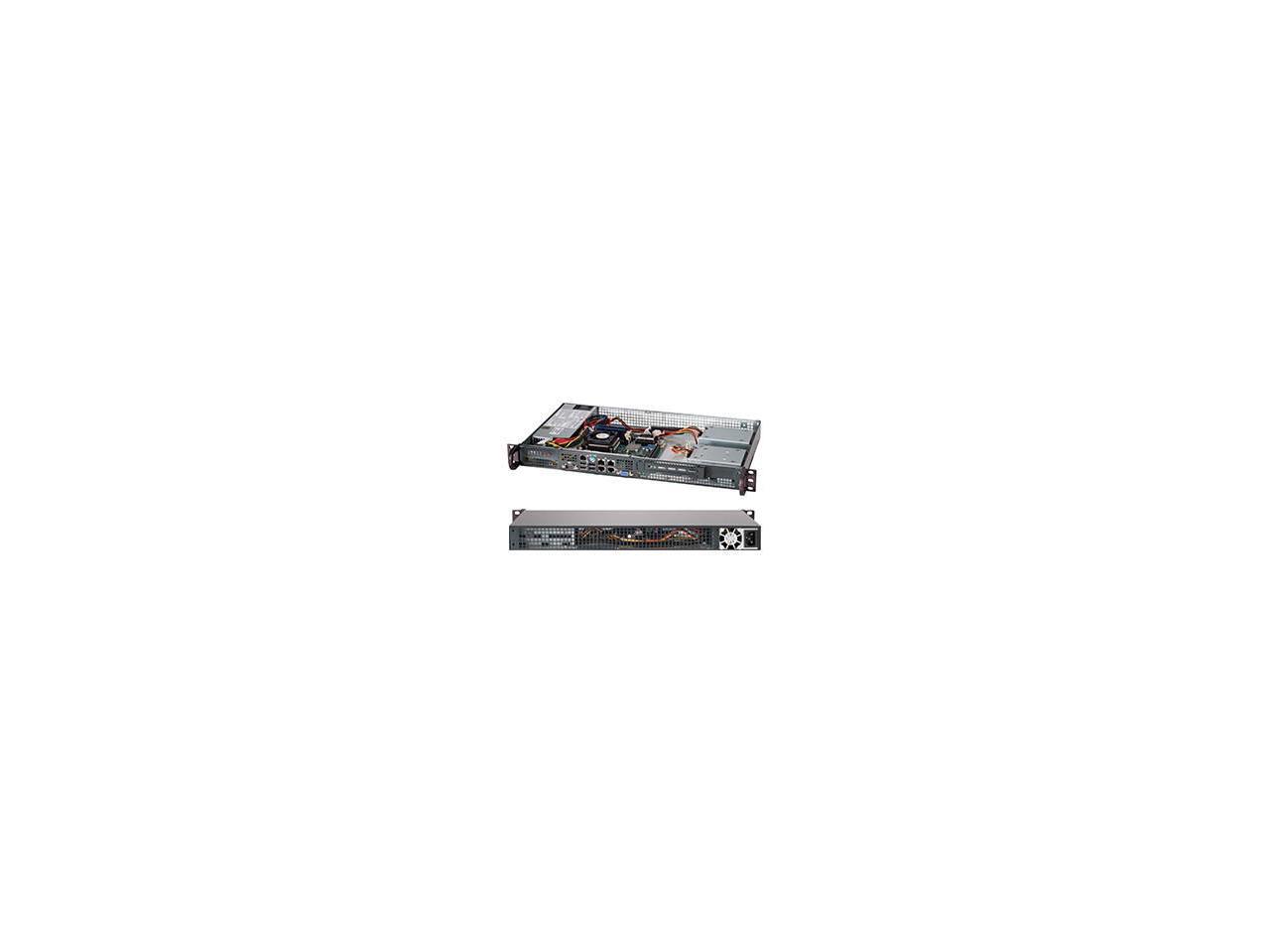 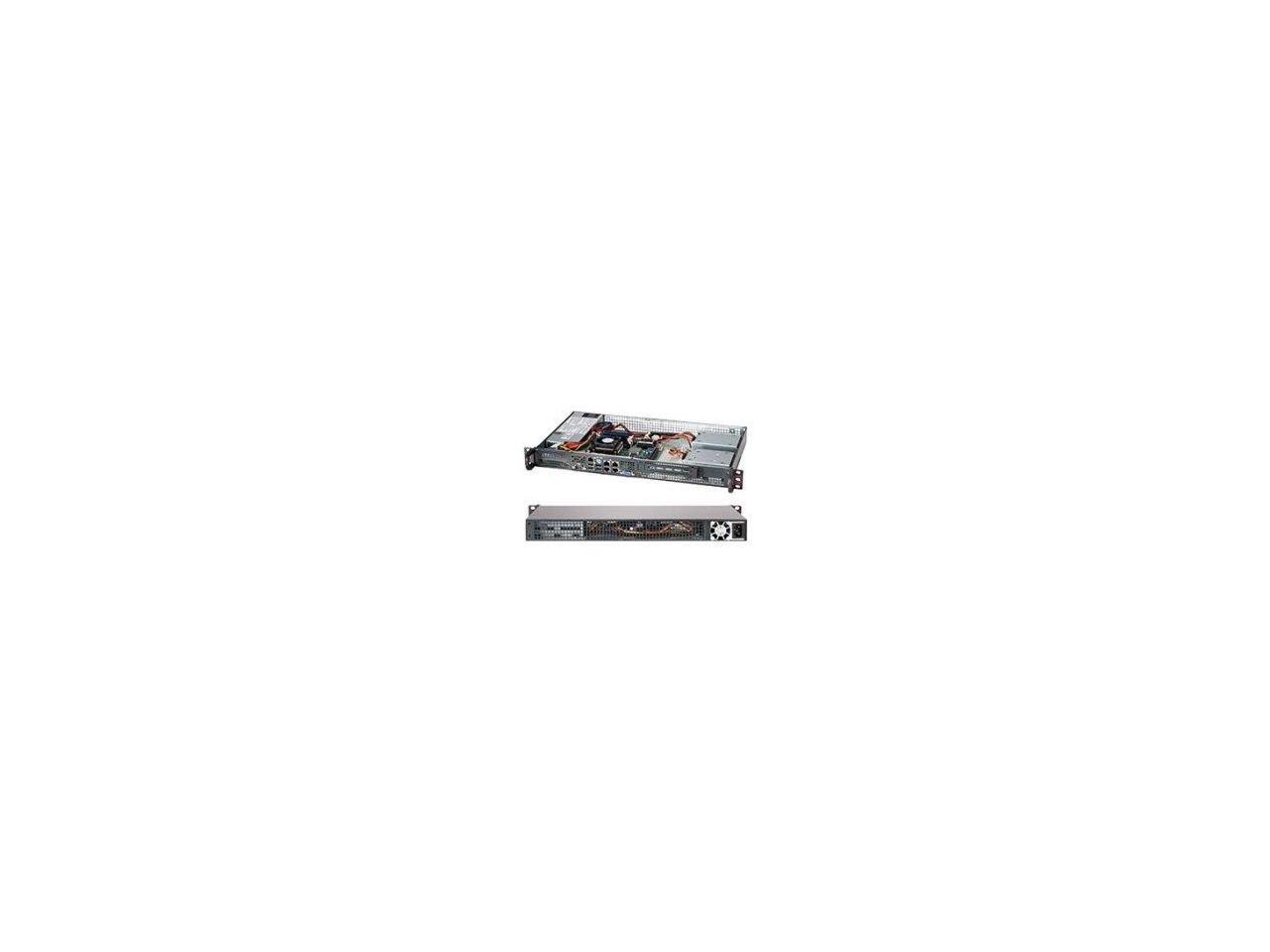 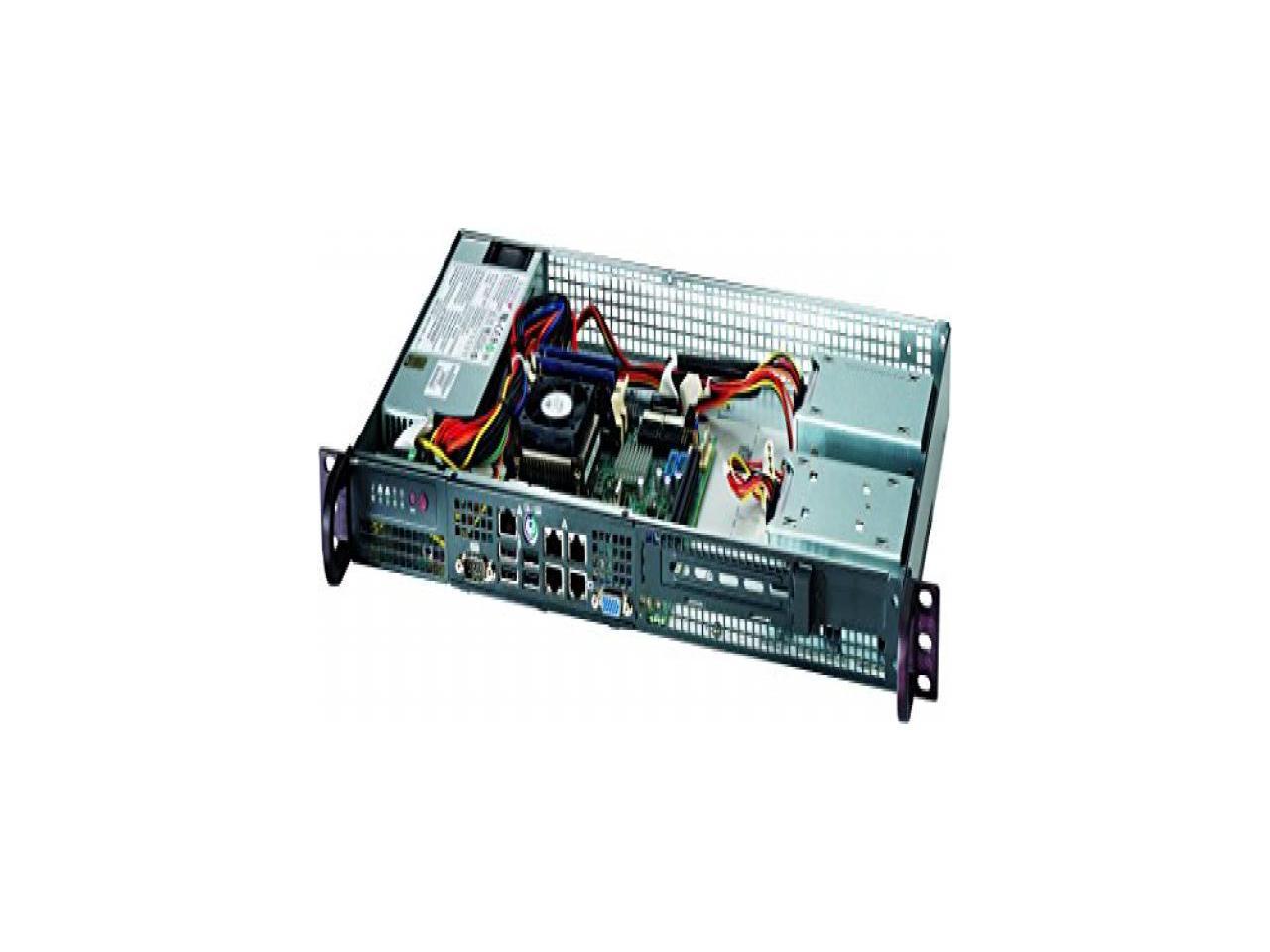 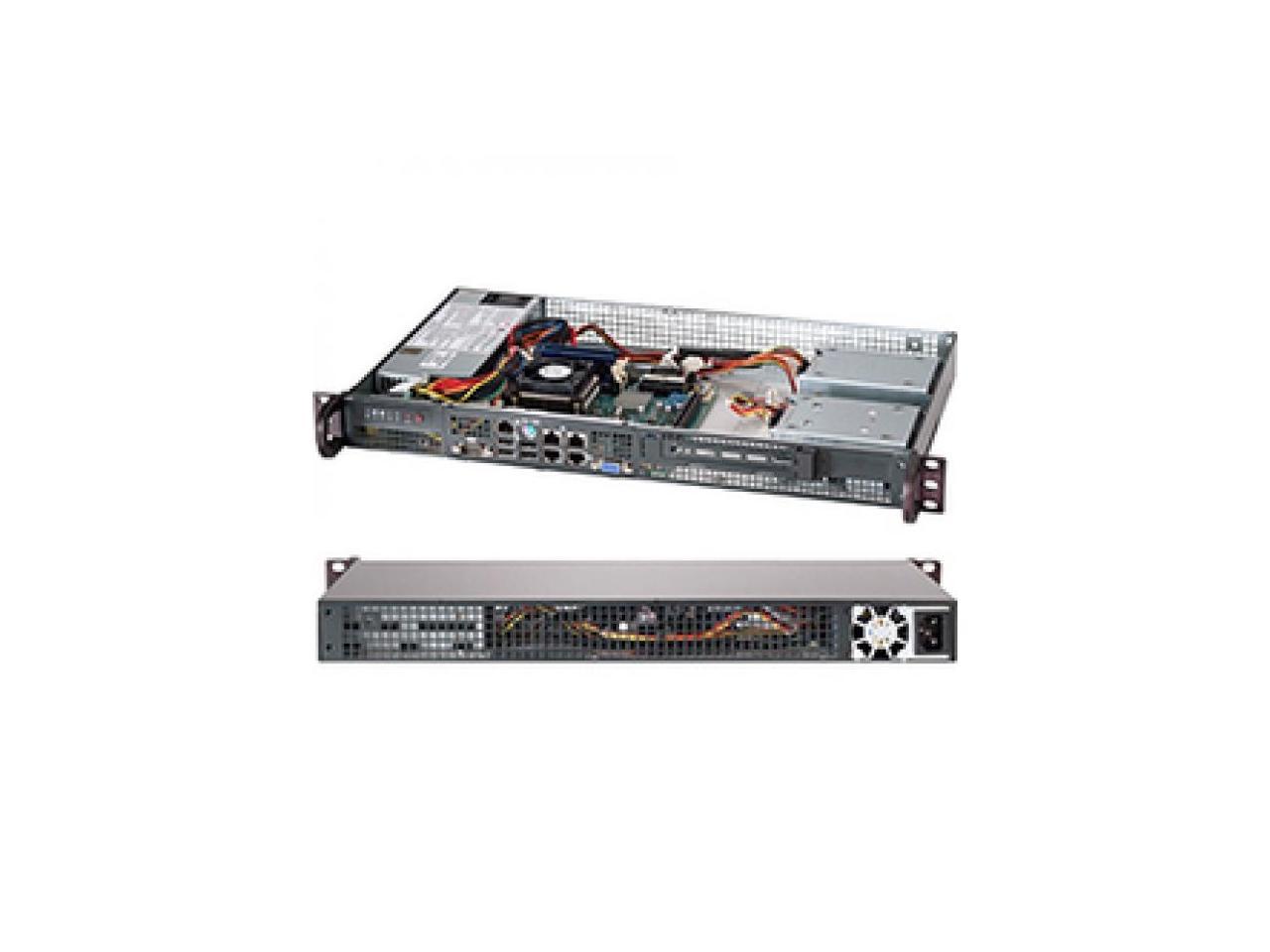 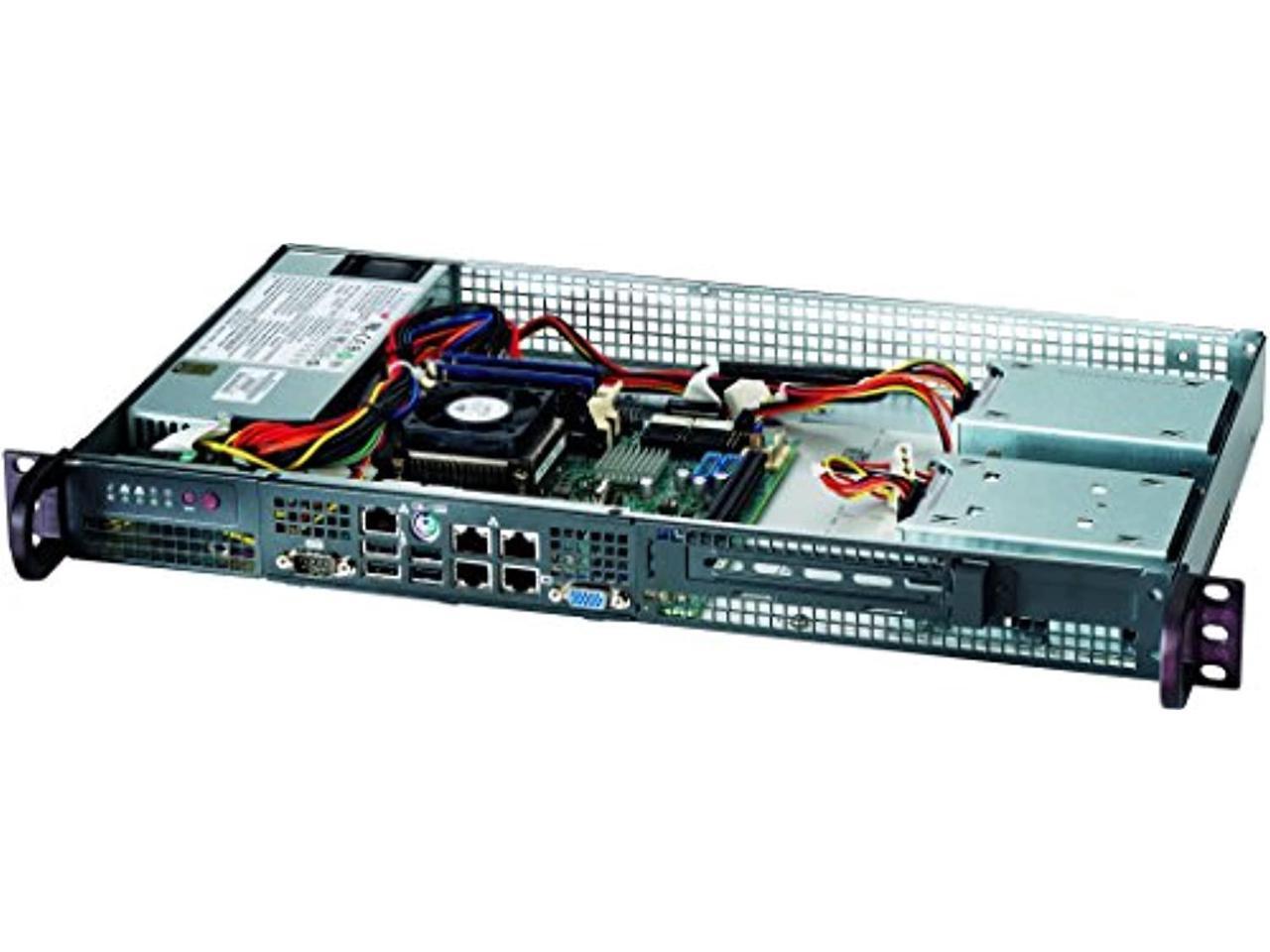 A 1U rack mount server chassis, the 505-203B accommodates mini-ITX motherboard, comes bundled with a 200W 80 PLUS Gold power supply, as well as adaptable interior space that allows you to mix and match HDD/SSDs and expansion cards.

Learn more about the Supermicro CSE-505-203B

Pros: Perfect for purpose, which is rackmounting of low-power embedded supermicro motherboards.

Overall Review: This case is for people who know what they're doing. If buying a hard drive mount or a few screws is beyond your capabilities, you probably shouldn't be assembling a system with this case.

Pros: This chassis stands alone as concerns dimensions, provisioning and cost, with enough space and power for a Mini-ITX board and a RAID's worth of SSD's in a very compact box.

Cons: As so few comparable boxes are available, one is tempted to deploy it on installations which, in fact, were better served by 1.5U equipment. (To be clear, that this is so is not the fault of the chassis.) In any case, builders must grasp that, while such deployments are possible, they are not simple.

Overall Review: Other reviewers have mentioned disappointment with missing screws, misaligned chassis parts, and unworkable cable assemblies; the unit I received presented none of these problems. That said, a great many 'enthusiast' mobo's (Asus, AS Rock, Gigabyte, etc) are not designed for 1U installations, and working around this mis-match will take some effort: 1. On the mobo, the wireless adapter (typically mounted via a dedicated m.2 socket alongside other I/O ports) is probably too tall, in which case you'll need to remove it and substitute USB-mounted or wired ethernet (or figure out a shorter m.2-based solution.) 2. On the mobo, the bolts holding the CPU clamp probably extend too far below the mobo (i.e., are longer than the chassis standoffs), meaning that you'll need either to cut them off or grind them down. (Tips: mask the entire mobo with conductive plastic such that only the tips of the bolts are exposed; buff or conceal the cut tip of the bolt; do everything you can to prevent contaminating the mobo with metal dust.) 3. Some CPU-mounted thermal solutions fasten to connectors inserted from the bottom of the mobo. Some, additionally, fix the connectors' positions via a plastic frame - whereby the frame extends too far below the mobo (like the CPU clamp bolts.) It may be possible to pop the connectors out of the frame, then glue them directly to the bottom side of the mobo (tip: use neutral cure sealant.) Alternatively, you could use ordinary machine nuts and insulated washers. 4. There is probably sufficient space above the CPU to install a 27mm fan, but doing so will probably leave no space for air flow. You may be able to get around this by making a hole in the cover; alternatively, you could install a shorter fan. A third solution is to abandon CPU-mounted thermal solutions and install lateral-flow fans (as the chassis' designers intended.) 5. As noted elsewhere, the I/O shield included with the chassis is very unlikely to mate with your mobo, while the I/O shield included with the mobo is likely too tall for the chassis. After carrying-out the steps detailed above, you will have some idea of where to cut the mobo's I/O shield to make it fit. If you mess up, you may be able to obtain a replacement I/O shield from the mobo's manufacturer - but you'll still need to cut the shield, it simply will not fit the opening provided. 6. As noted elsewhere, you'll need to supply your own drive mounting brackets - but as dual-mount brackets can be had for as little as $5, this is surely the least of your problems.

Pros: It's a case, it's rackmount, the C2550 mobo (I bought it before the news came out) I bought fits perfectly. Since this case does not have a removable EMI shield thingy, be sure that the mobo you buy for this case matches the pattern.

Pros: - Solid, well made case - Lots of hardware included, including standoffs for the motherboard and bolts to mount it in a rack. - Power cord included - Front mounted IO is ideal for my use case

Overall Review: This is a case made for Supermicro motherboards. For what it is, I'm very happy with it. I'll be using it for an OPNsense router/firewall with a A2SDi-4C-HLN4F motherboard. There were a couple of issues with the install... - I happened to notice one of the wires on the main power harness coming out of the power supply was nicked pretty bad. The conductor inside wasn't cut but was exposed about 1/8". After looking at it, I decided to just wrap it in some electrical tape. It didn't seem worth returning for. - I couldn't find any documentation (neither in the case manual nor the motherboard manual) on the orientation for plugging in the connector for the front panel controls/LEDs. I seemed to have guessed correctly. I wouldn't want to know what would happen if I had gotten it wrong. I'd buy it again.

Pros: I had to seperately order the IO panel so it fit my motherboard. Your mileage may vary. Happy Thanksgiving!

Cons: The options are all optional ($).

Overall Review: Use onboard storage or buy HDD brackets. Use onboard comms or buy the PCIe riser. Remove the I/O shield or buy one for your board. The factory one looks like it will fit your board if you pop out the right knockouts. It won't. Your board will be pressed against the power supply and power cables will be snaked between board components. If you don't like that idea look at the CSE-504.

Pros: Case is made for my MBD-X11SBA-LN4F-0. Comes with Power Supply

Cons: Case did not come with any hardware, ie screws. Case also does not even have a place i can screw my motherboard down in. All open holes. Will need to buy stand offs or nuts.

Manufacturer Response:
We are sincerely apologize the issue you are experiencing with your chassis. For any accessory missing, feel free to contact our RMA Department. If you still have any question, feel free to contact us. Please see the below technical support contact information: Phone: (408)503-8000 Hours: 9:00 a.m – 6:00 p.m. Pacific Time (Monday – Friday) Email address: support@supermicro.com You can also submit your issue online: https://webpr3.supermicro.com/SupportPortal/Account/Login Please do not hesitate to contact us if you have any question. Thank you! SM Technical Support

Cons: Since we could not install the mother board, it is a total waste of money.

Manufacturer Response:
We are sincerely apologize the issue you are experiencing with your chassis. Please kindly contact our technical support so that we can find out more about your configuration and work with you in finding a solution. Please see the below technical support contact information: Phone: (408)503-8000 Hours: 9:00 a.m – 6:00 p.m. Pacific Time (Monday – Friday) Email address: support@supermicro.com You can also submit your issue online: https://webpr3.supermicro.com/SupportPortal/Account/Login Please do not hesitate to contact us if you have any question. Thank you! SM Technical Support