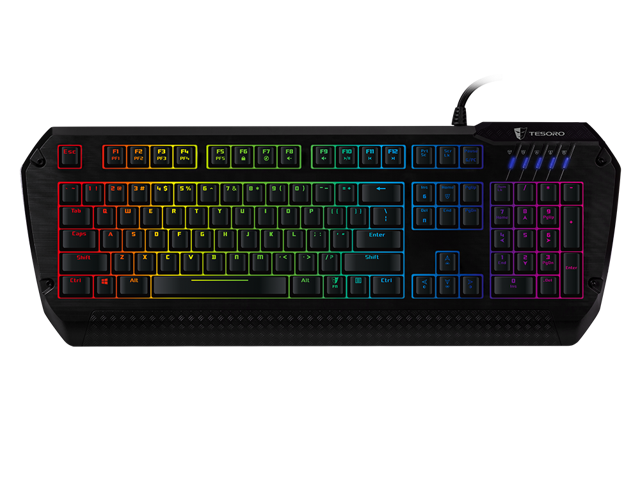 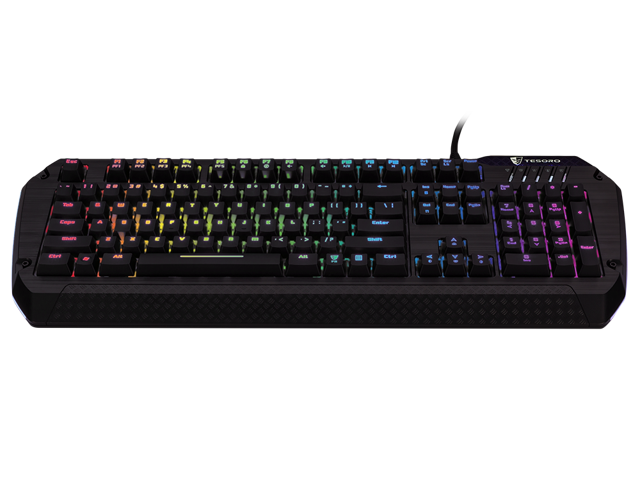 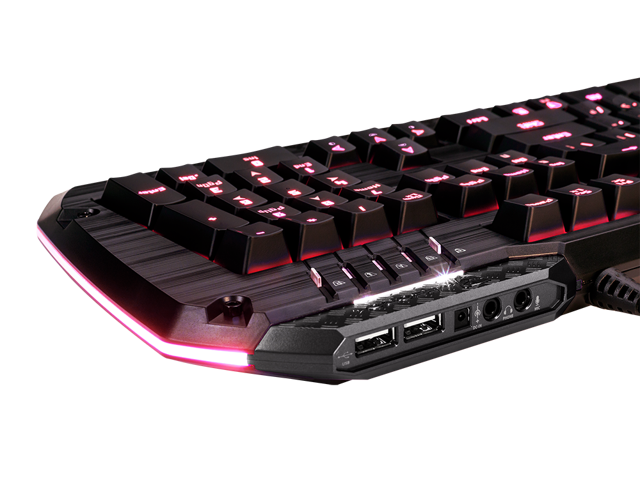 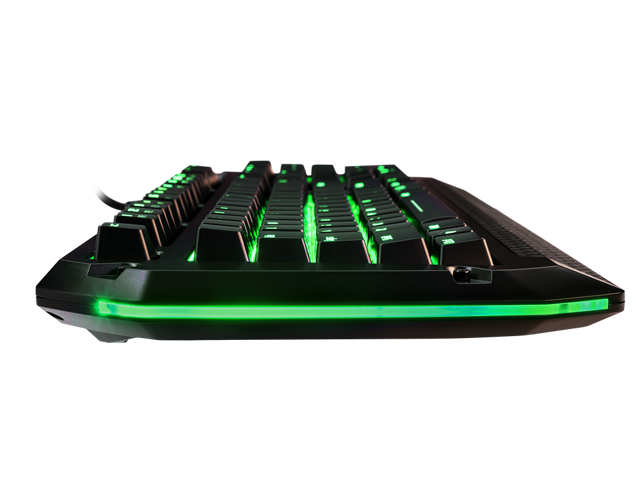 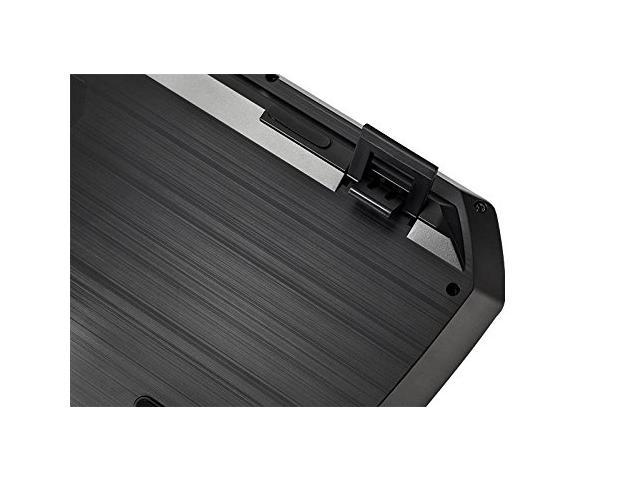 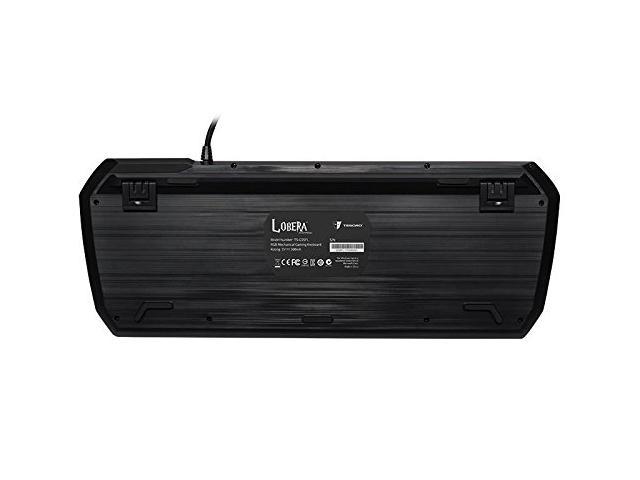 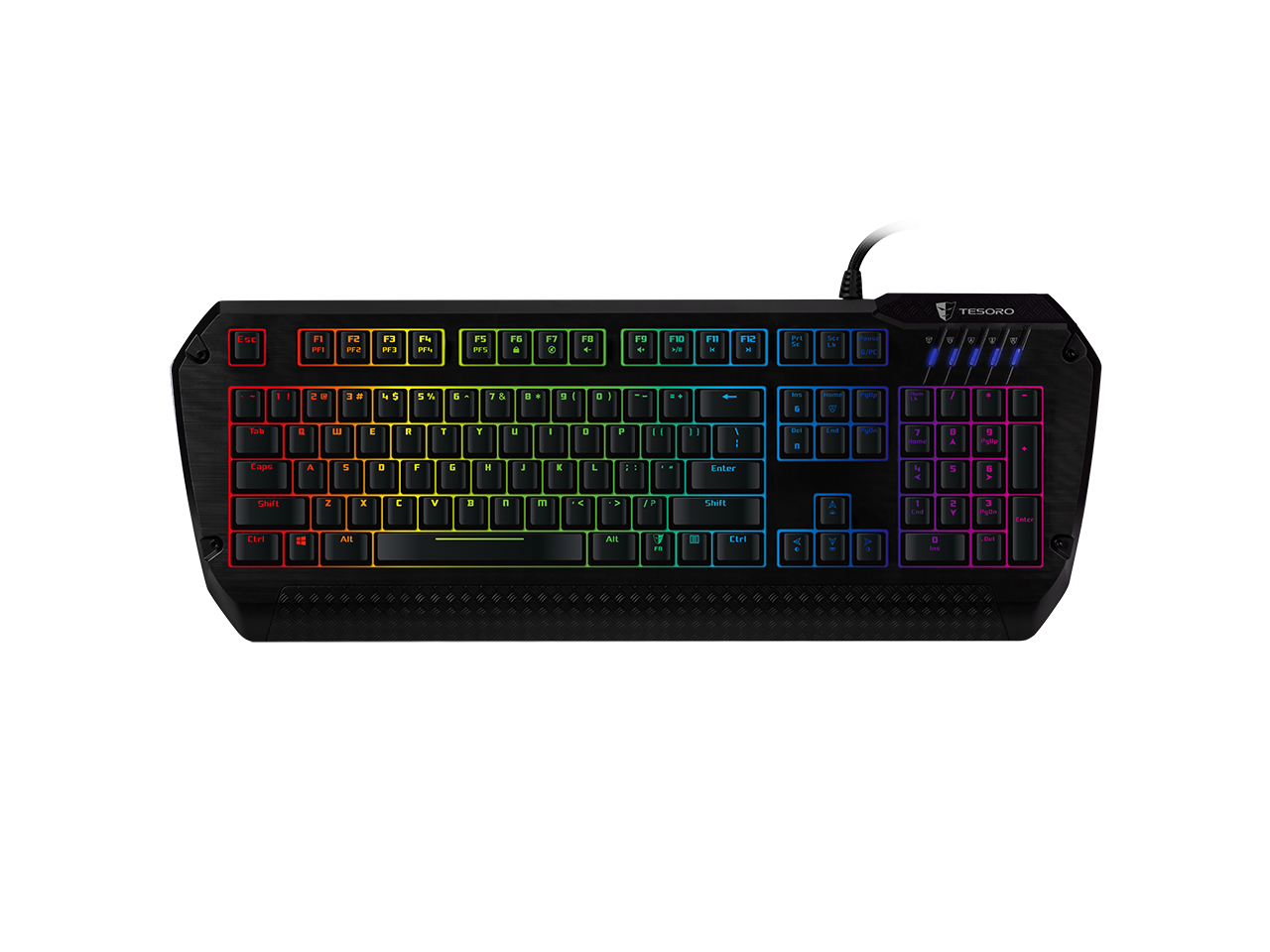 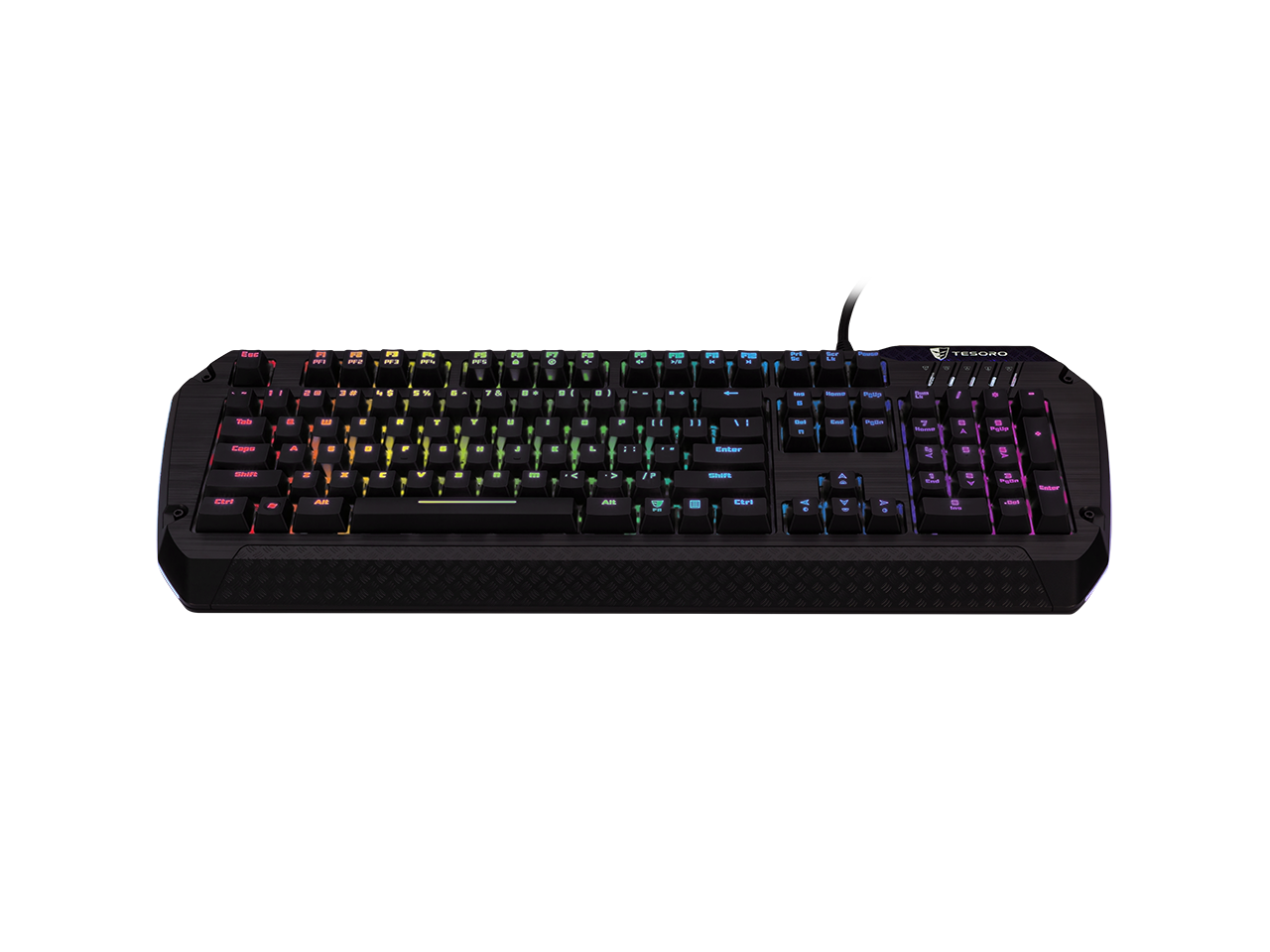 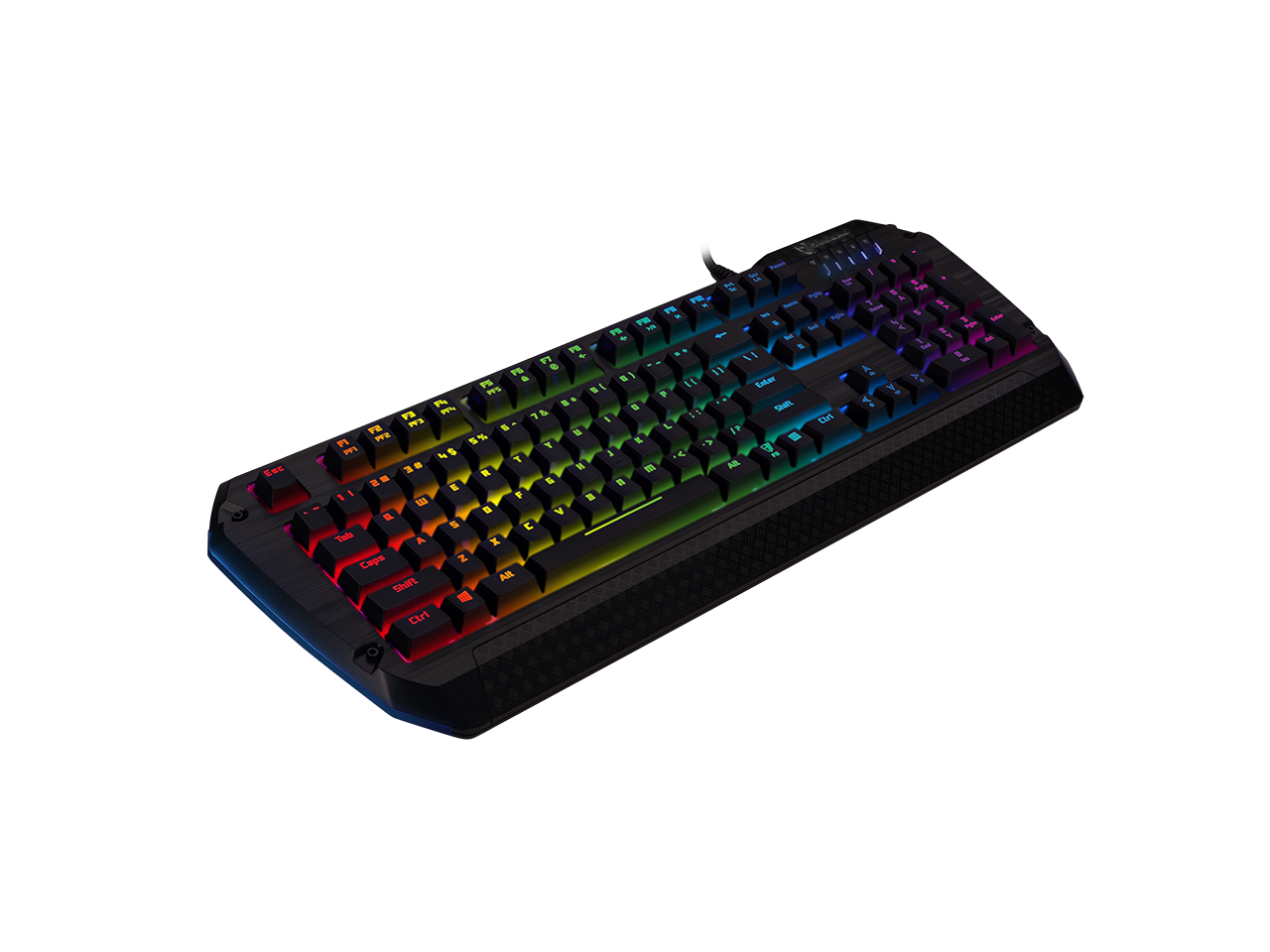 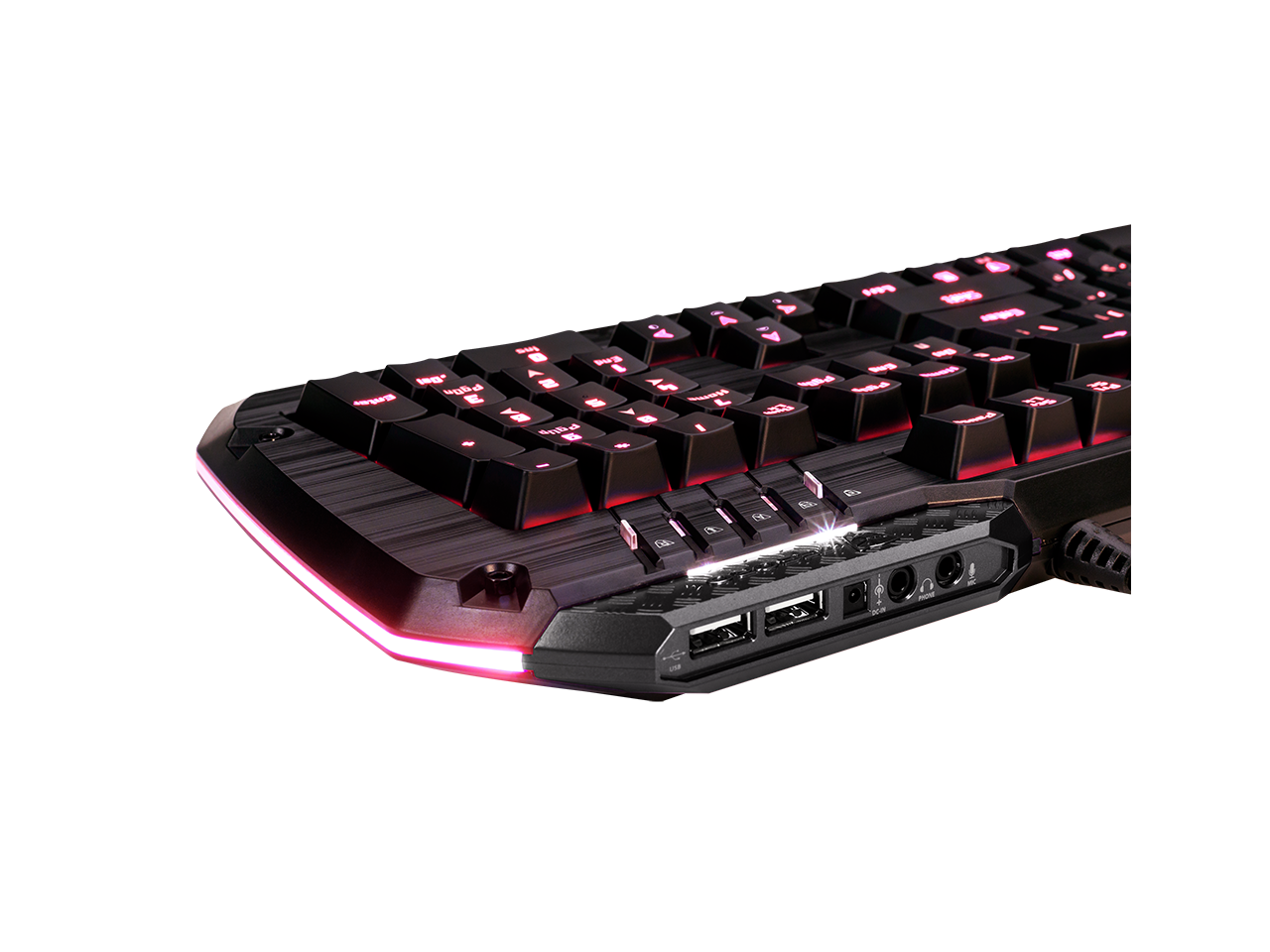 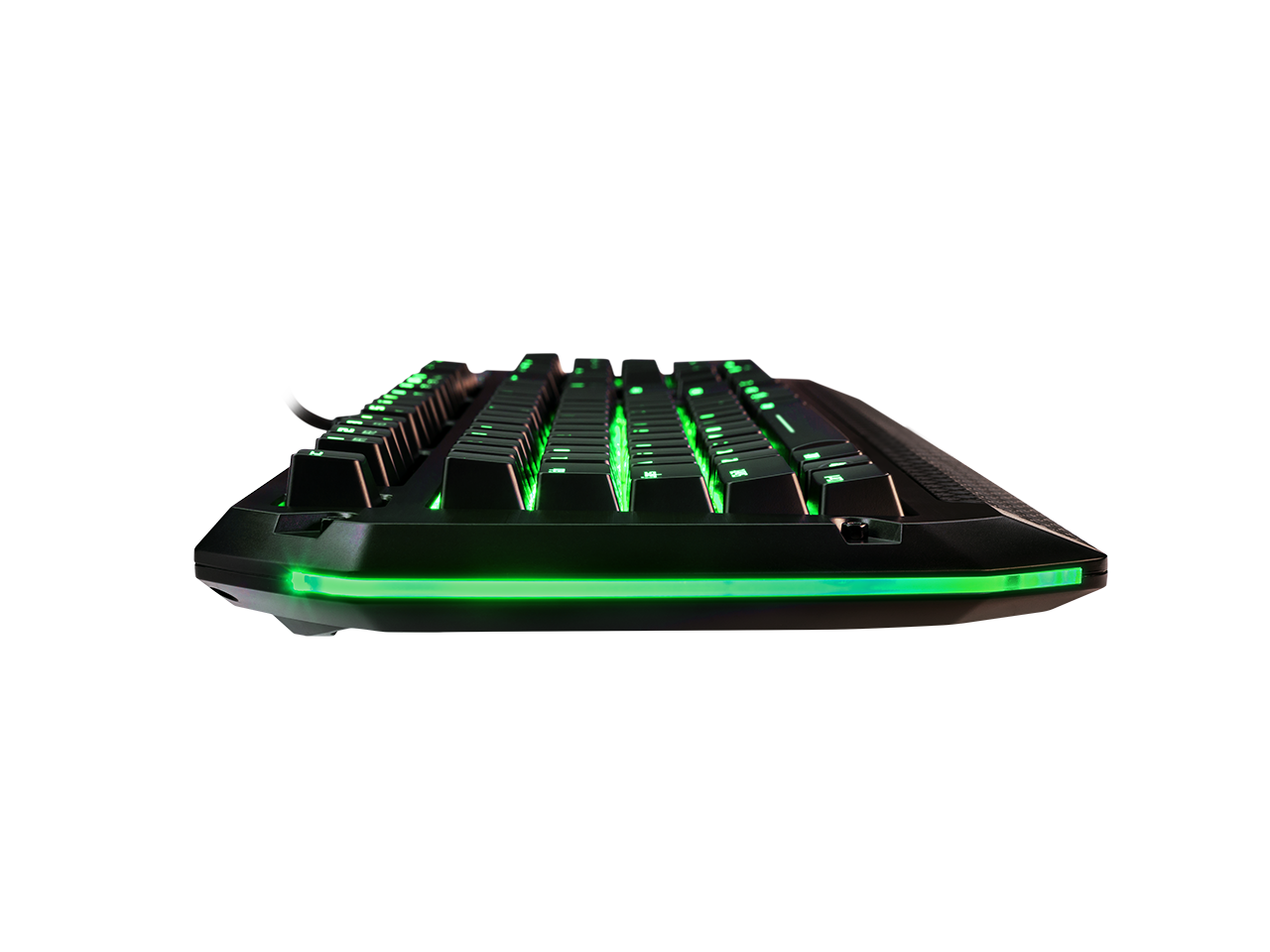 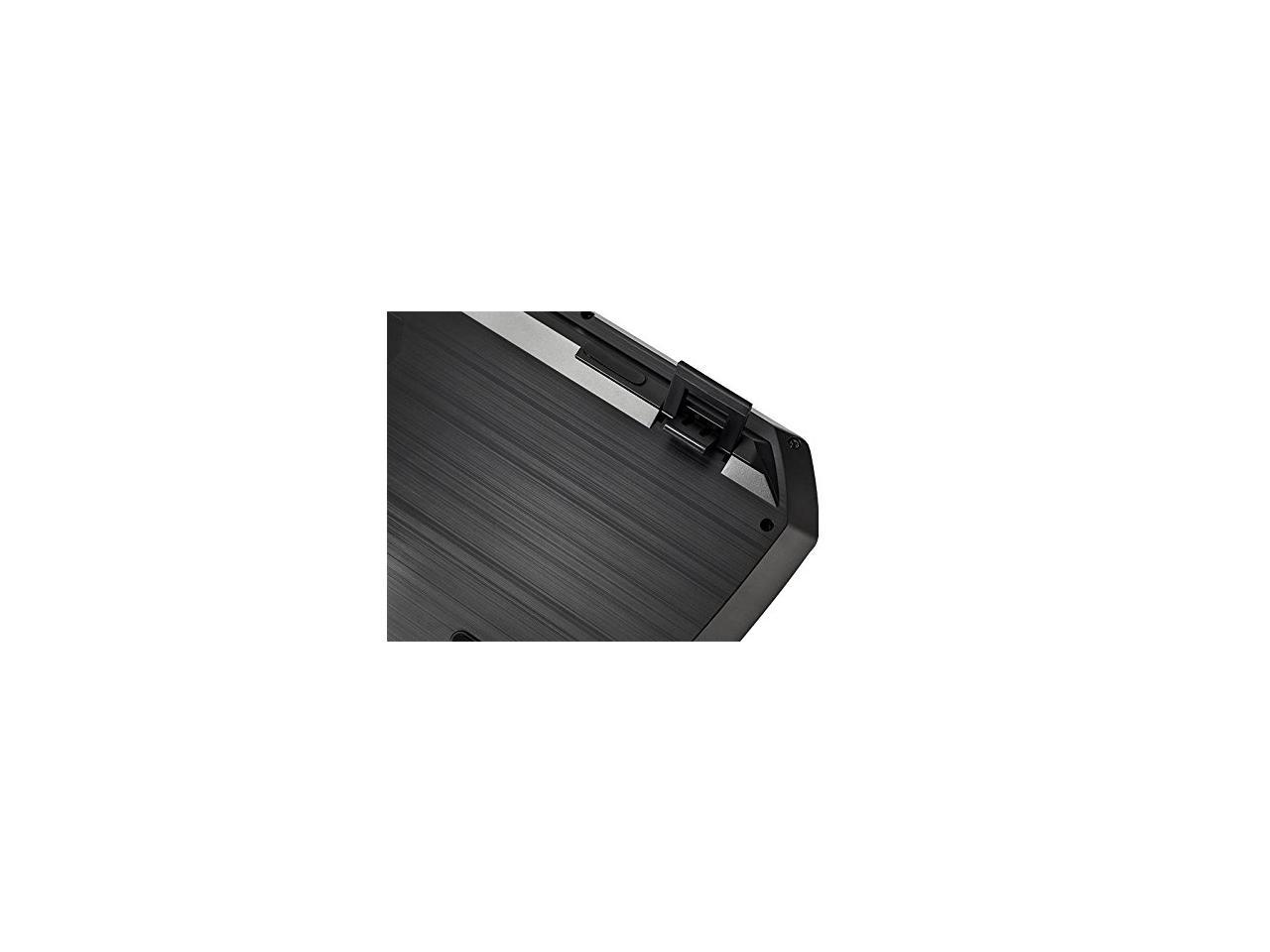 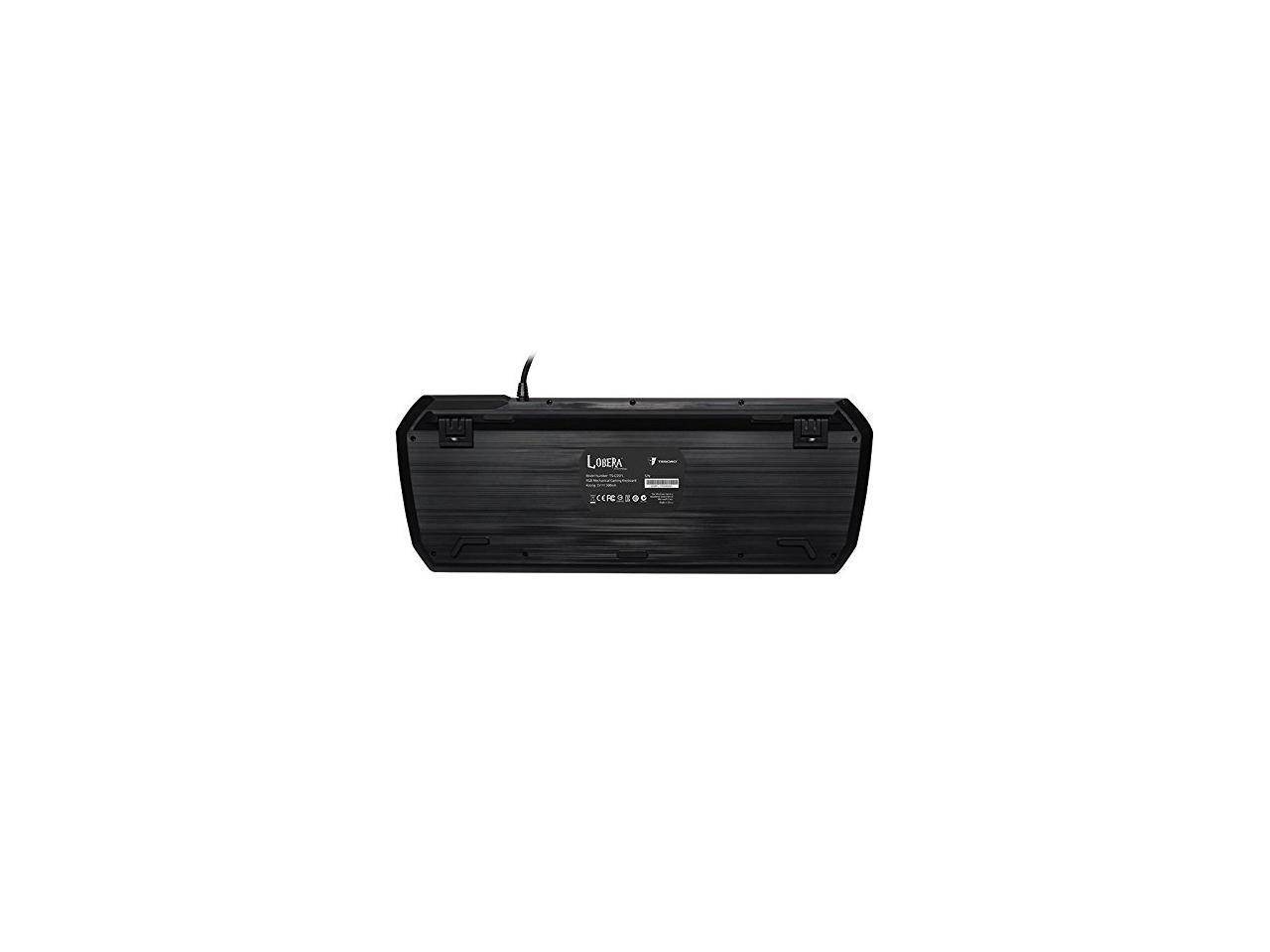 Lobera Spectrum is a top-notch programmable gaming keyboard with advanced backlighting features. It has a number of stunning illumination modes including audiomode which makes the LEDs flash to the beat. Its highly customizable illumination processor even lets set individual key colors and turn the backlighting on and off for each key. Lobera "wolfslayer" is the sword which symbolized power used by Saint Ferdinand III. It has become one of the most famous swords in the history.

Durandal Ultimate can be different. Depending on your task and your skill you can choose the switches type that would fit you most. Different switches behave differently due to their unique designs. A rookie's choice. Smooth and balanced. The Lobera Spectrum allows gamers to individually customize virtually any color, to any key. There are 9 different LED effects, such as dimming, full zone, trigger, ripple, firework, radiation, rainbow wave, and per key customized mode as well as 5 levels of brightness and 5 distinct profiles to store them.

When Audio Mode is activated, the LEDs of each individual key dance to the beats and bass of your favorite tunes. The Lobera Spectrum comes with a pass-through hub with audio/mic jacks and 2x USB 2.0 ports with a DC-in jack allowing gamers to charge their smart phones and tablets directly through the keyboard. Gamers are able to instantly program macros across the whole keyboard. Profiles can be switched in just a couple keystrokes. Built-in storage gives players the freedom to carry their preferences with them on different computers. Built to Last,
Designed for Play Lobera Spectrum has got a very convenient layout that meets the demands of both casual and hardcore gamers. It is easy to use and to get used to. Learn more about the Lobera Spectrum

Pros: - Vibrant LED lighting and colors, cool side lighting - Blue mechanical switches, great tactile feedback - Build quality is very impressive, has decent weight to it - Brushed plastic - Key cap size is pretty good, as is the quality - Two USB ports - No unnecessary gaming keys - Great packaging for a keyboard - Value for what you get

Cons: - Software is pretty bad, some problems getting it to work on Windows 10 initially (solved through plugging into different USB port) - Lack of LED lighting in-depth customization - No LED backlight brightness control (coming from a Corsair K70) - USB current capacity is limited to 100mA - Buggy software, wouldn't let me change anything at one point; had to restart my computer to fix it

Overall Review: If Tesoro can update the software to be more manageable, or at least fix a lot of the bugs, this product would have had five eggs instead of four. I would imagine a software or firmware update to the model could implement more lighting controls and functions. Other than that, this keyboard is doing great for me. I would certainly recommend this if you don't mind the software. This review was typed on the keyboard, and I will update/submit accordingly if any issue(s) arise.

Overall Review: I was hoping for a firmer key feel (spent lots of time typing on IBM PC/XT/AT keyboards and still miss that massive mechanical feel) but this keyboard is far superior to the squishy monstrosities that I usually use though.

Overall Review: it is a comfortable and functional keyboard, really heavy, it feels well made i wish they made rgb the indicator lights, i hate that permanent blue accent

Did you find this review helpful?
Anonymous
Ownership: 1 day to 1 week
Verified Owner
Quality Keyboard and a Great Value3/10/2020 7:56:20 PM

Pros: * Value - hard to beat, especially when on sale * Kailh blue switches - probably as better or better than Cherry MX being rated for a longer lifespan but regardless seemingly better than some others out there *Built-in two-port USB hub can be fully powered to allow high current draw (within USB 2.0 specifications) with the supplied cable *Audio pass-through apparently takes nothing away from nor adds anything negative to sound quality

Cons: * The blue LED indicators in the upper right corner cannot be adjusted for brightness or color. They're bright and rather distracting - especially depending on what color you've chosen for the rest of the board. Black electrical tape is a viable solution but ... not really ideal. * All-plastic chassis, though not really from a functional perspective. An aluminum top-plate would give the keyboard a nicer and more reassuring aesthetic. Tesoro does offer that, essentially, with the Colada Spectrum model albeit at a substantially higher selling price. * Certain styling choices. Again, not really a "con" but anytime plastic is made to look like something else (in this case metal) I seldom like the result. Still, it's subdued here and really not a problem from my perspective.

Overall Review: I bought this keyboard as a non-gamer looking for a better quality experience. Mechanical keyboard pricing has dropped significantly since the initial rush of popularity and the advent of units featuring RGB lighting. That means there's a buyer's market now for gamer and non-gamer alike with plenty of great choices, including several offerings from Tesoro. The Lobera Spectrum was released several years ago but it's hardly obsolete. It installs and works great under Windows 10 without a driver or additional software. Of course, features like lighting customization, macros, etc., must still be configured using the Tesoro application but it installs and runs fine with a rather light footprint under 13MB. Functionally, the software is adequate but as other reviewers have pointed out, it really isn't "class leading" or on par with, for example, Corsair's ICUE. ICUE also has a semi-bloatware footprint of 150MB. That may matter more to some than others but as a non-gamer I think the Tesoro application is perfectly fine and I appreciate the lack of memory it requires. In terms of usability, coming from a cheaper board with PCB-mounted Outemu blue switches, for me the most immediate benefit is better feeling key switch actuation. This board appears to use plate-mounted Kailh switches which I've found provide superior tactile and audio feedback. I simply type better and faster on this board and I prefer the slightly more subdued and precise sound. The housing/chassis is entirely plastic but the plastic doesn't feel cheap and the board has a nice heft to it. While many metal or ABS/metal chassis keyboards do certainly have a nice aesthetic, I doubt under normal circumstances any of that metal would actually provide a tangible benefit to the longevity of the board or better the typing experience as a whole. Overall, while Tesoro does imbue their product line with a certain degree of styling, this board doesn't look cheap though admittedly the design may not appeal to everyone. Nevertheless, it's more toward the conservative end of the spectrum than many "gaming" boards out there. This board would do just fine in all but the most austere or stodgy professional setting - clicky keys possibly notwithstanding, of course.

Cons: I have Windows 10,and my other keyboard would not work with windows 10.The only problem with this board,when starting up,it says [ no keyboard detected ] and I can not get into the Bio's.Systems in 10 shows the keyboard in stalled,but no bios.Light setting all work.E-mailed the company over a month ago,and to this day,no responds from them.Hopefully down the line they will update this keyboard to work like it should for 129.00 bucks.

Overall Review: I gave up on there customer service,and put the keyboard on my wife's computer,she is running Windows 7.I bought from Newegg a Corsair gaming STRAFE RGB mechanical cherry MX brown,and worked as soon asI plugged it in my computer with Windows 10.No problems at all,LOVE this keyboard.

Pros: The keyboard is very well made, The keys have a nice click and feedback, it is like night and day between this and my previous membrane keyboard,

Cons: The illumination is non existent in Windows 10. (The software isn't updated for windows 10) With windows 7 the keyboard had great backlighting, but as soon as I updated to windows 10, the lighting stopped.

Overall Review: I purchased this keyboard from a competitor, because it was on sale there, but I should have spent a little more and got a corsair, or a razor or something else that would have windows 10 support.