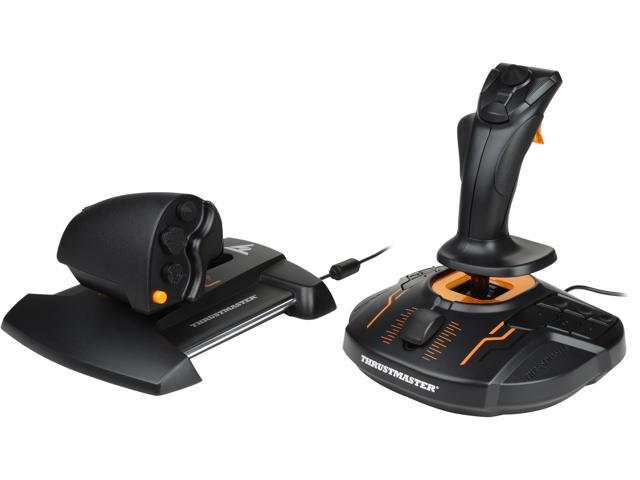 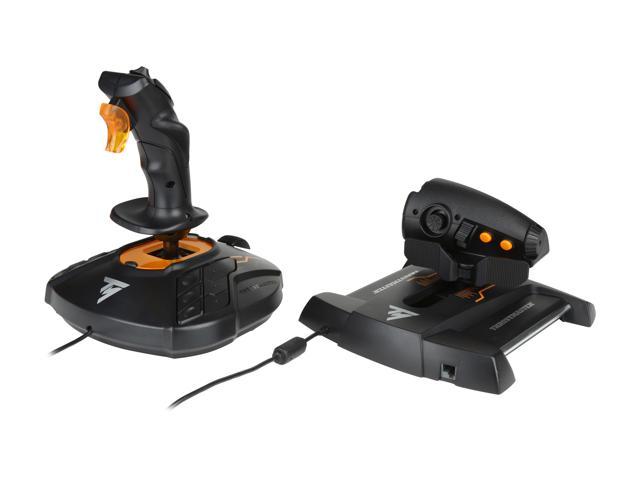 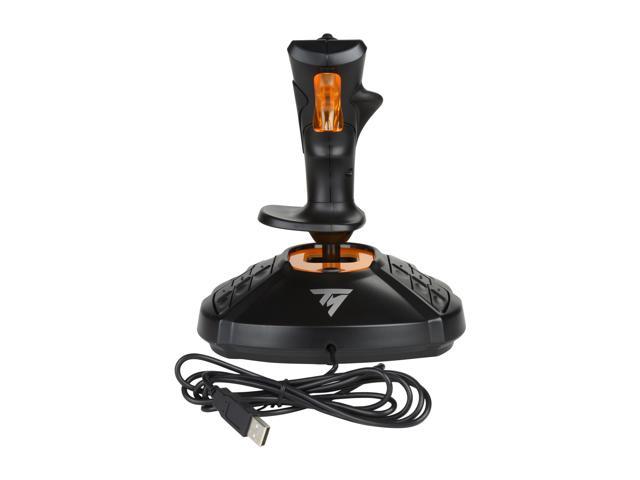 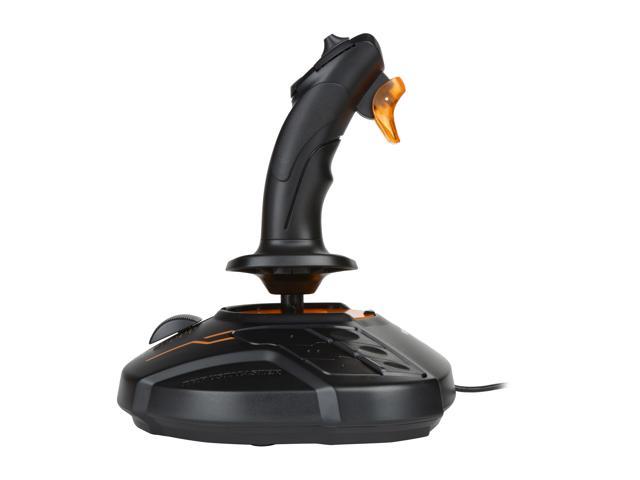 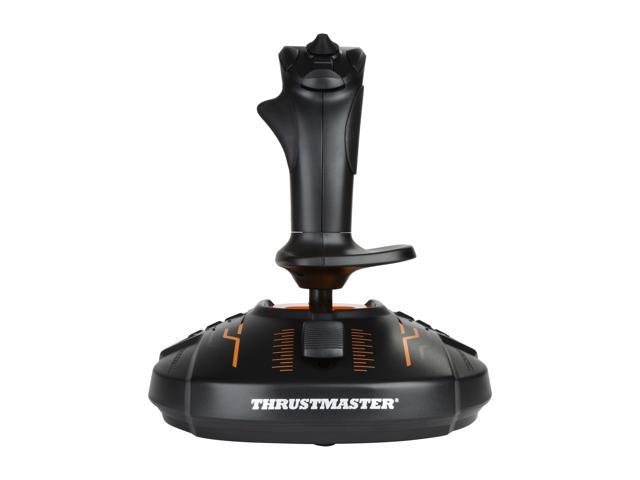 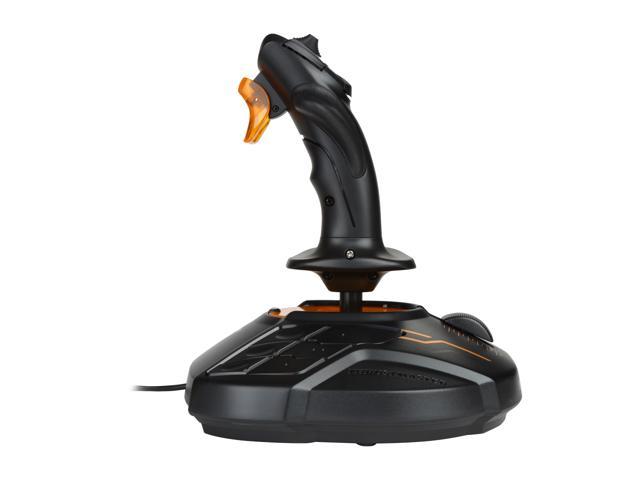 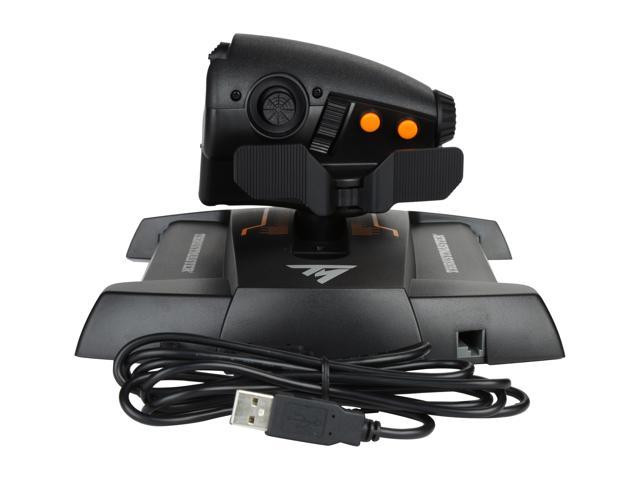 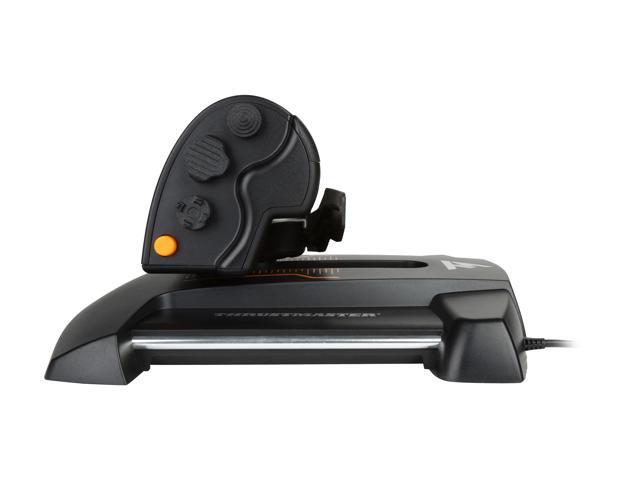 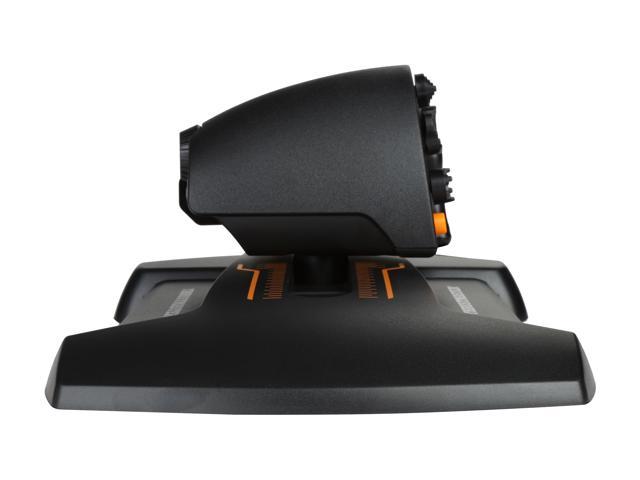 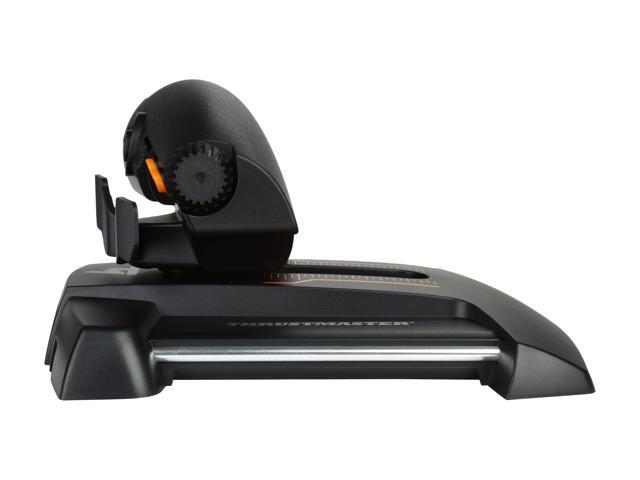 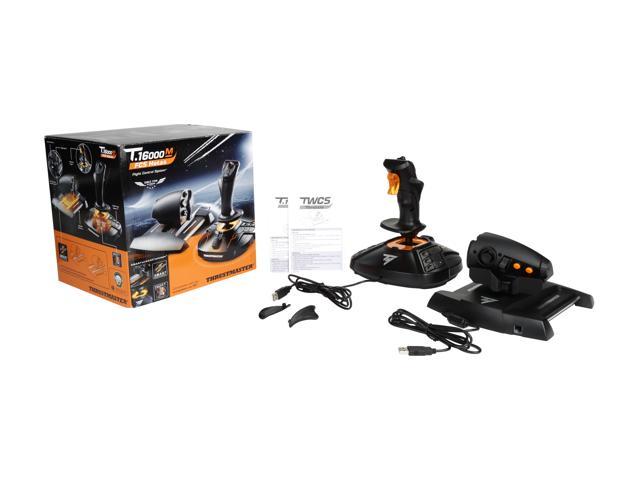 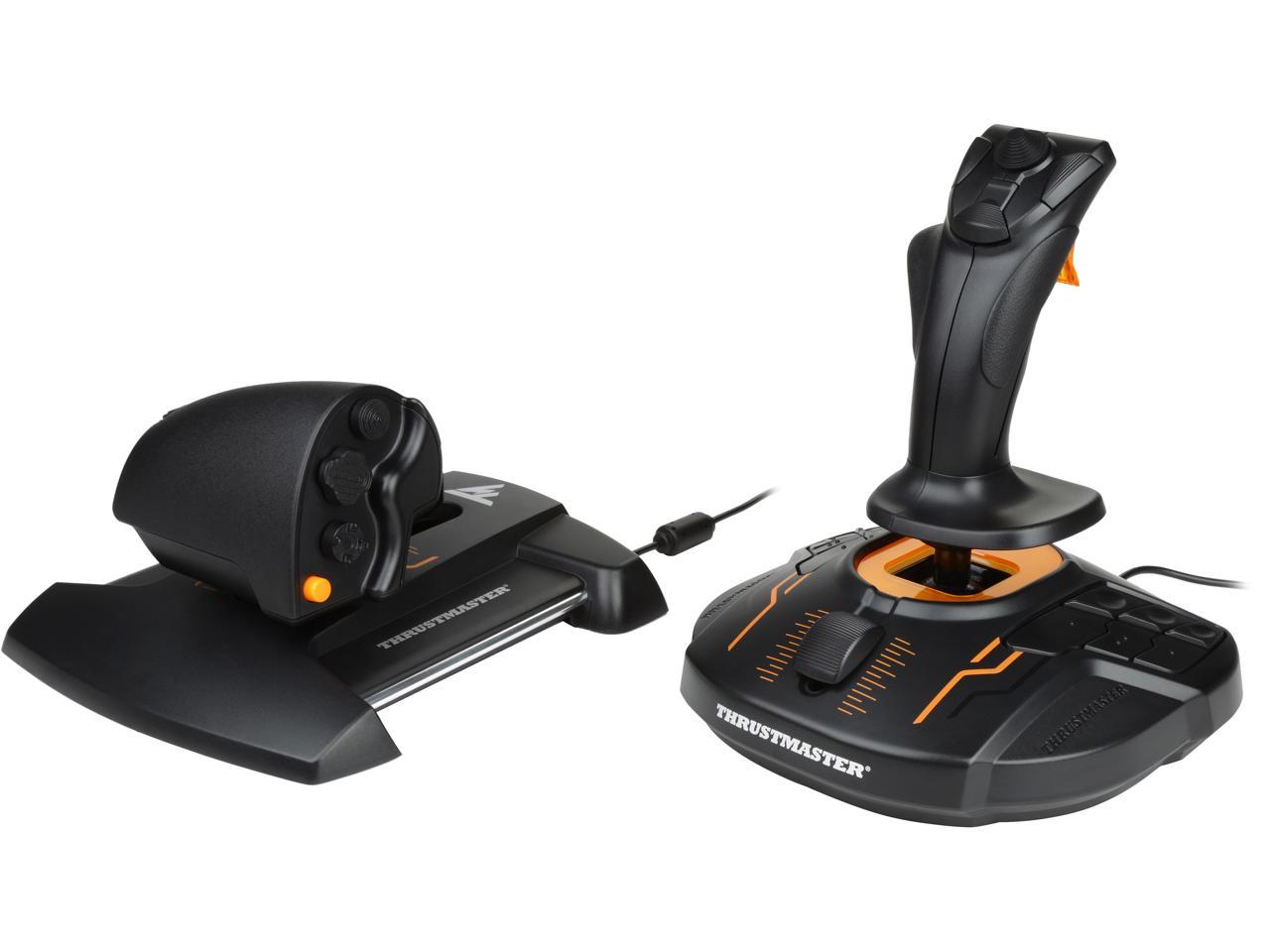 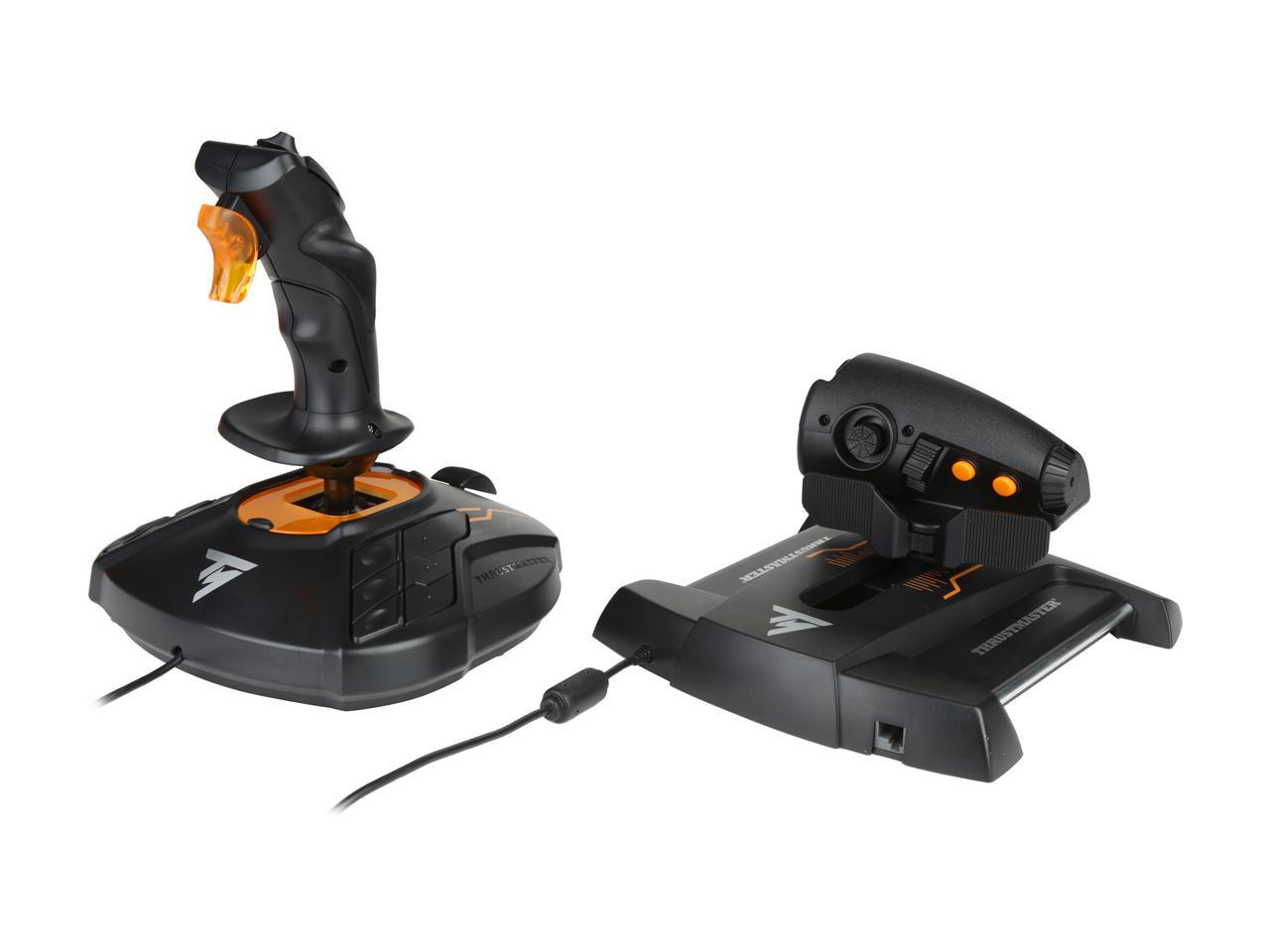 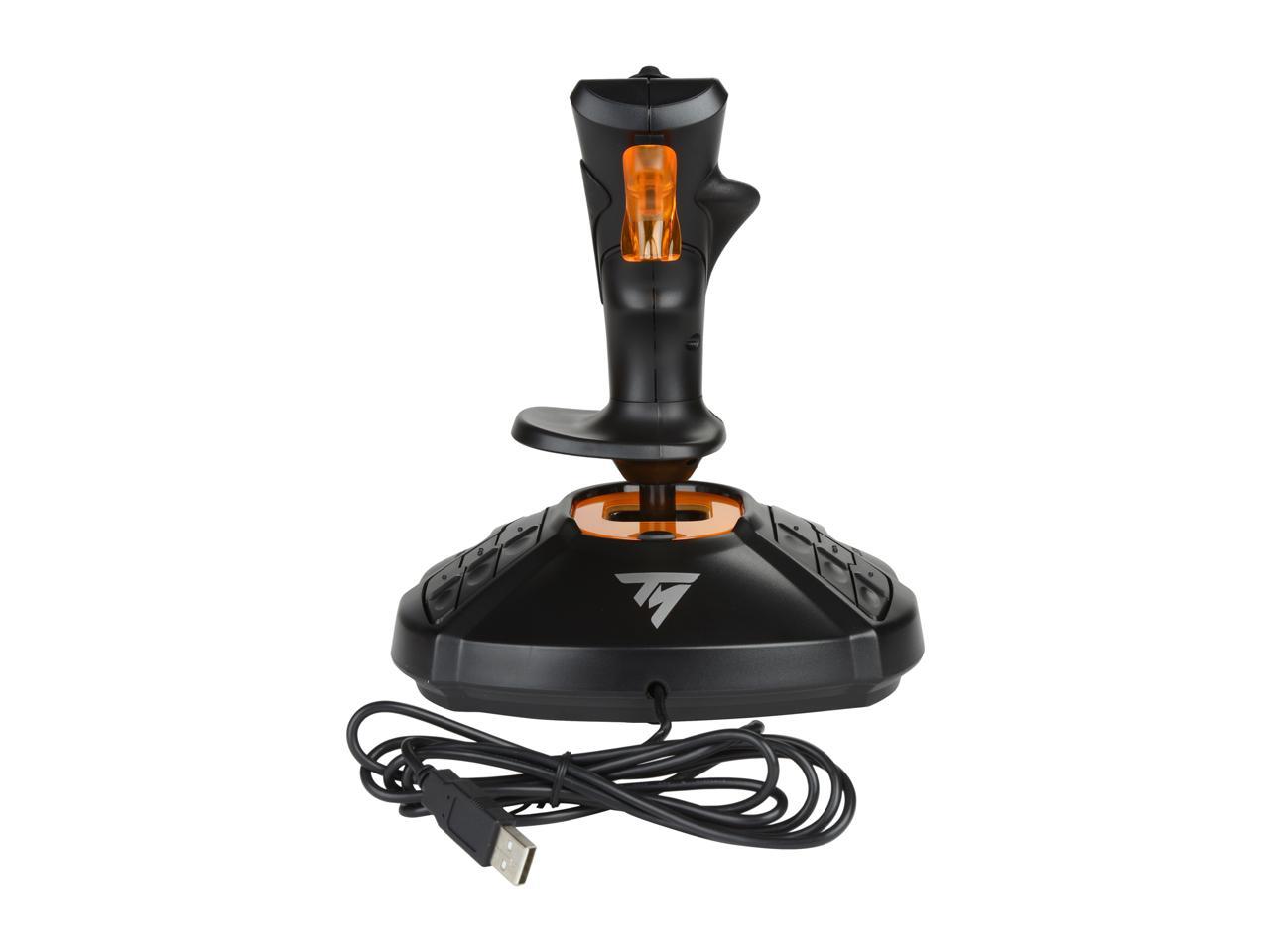 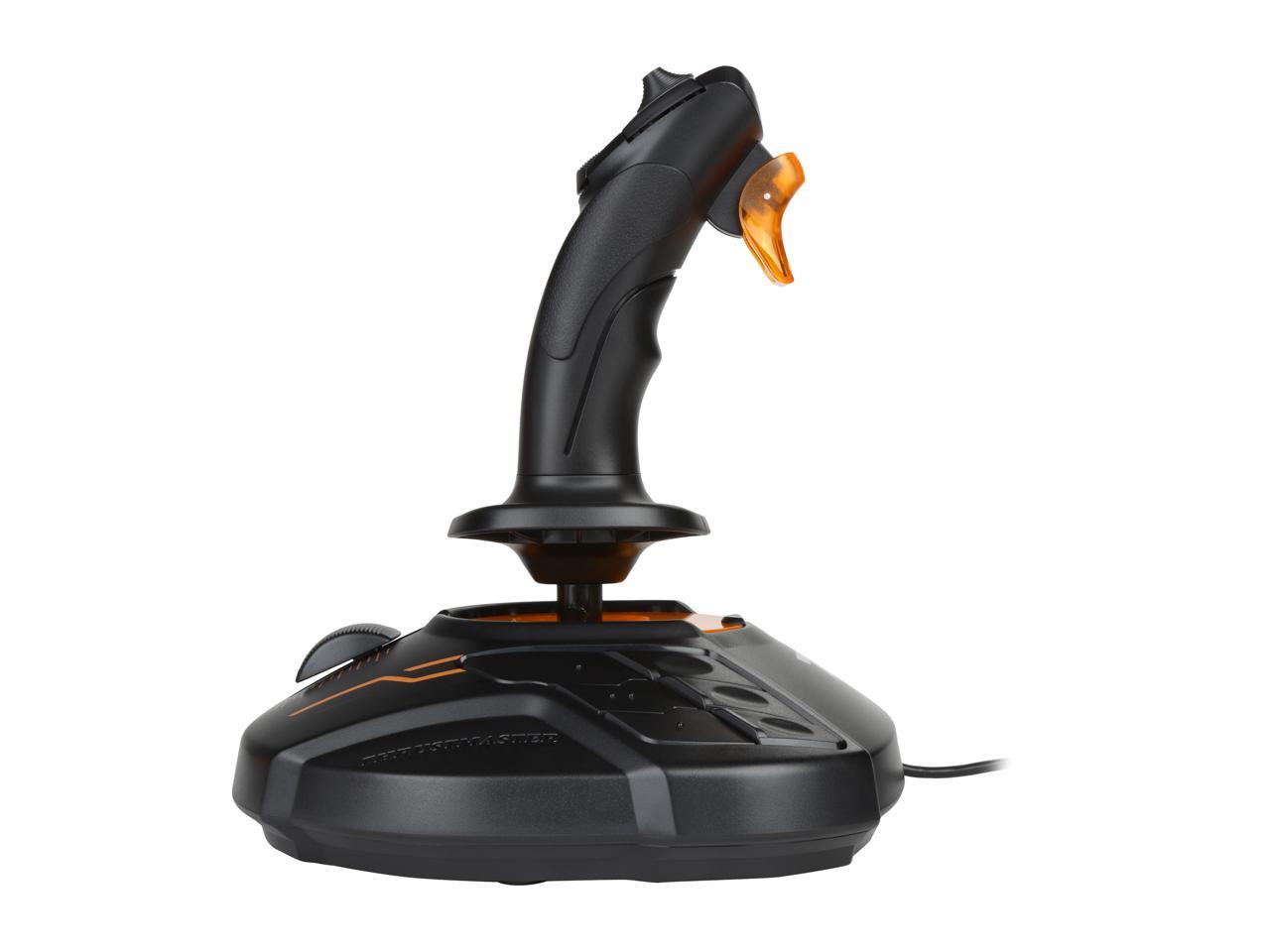 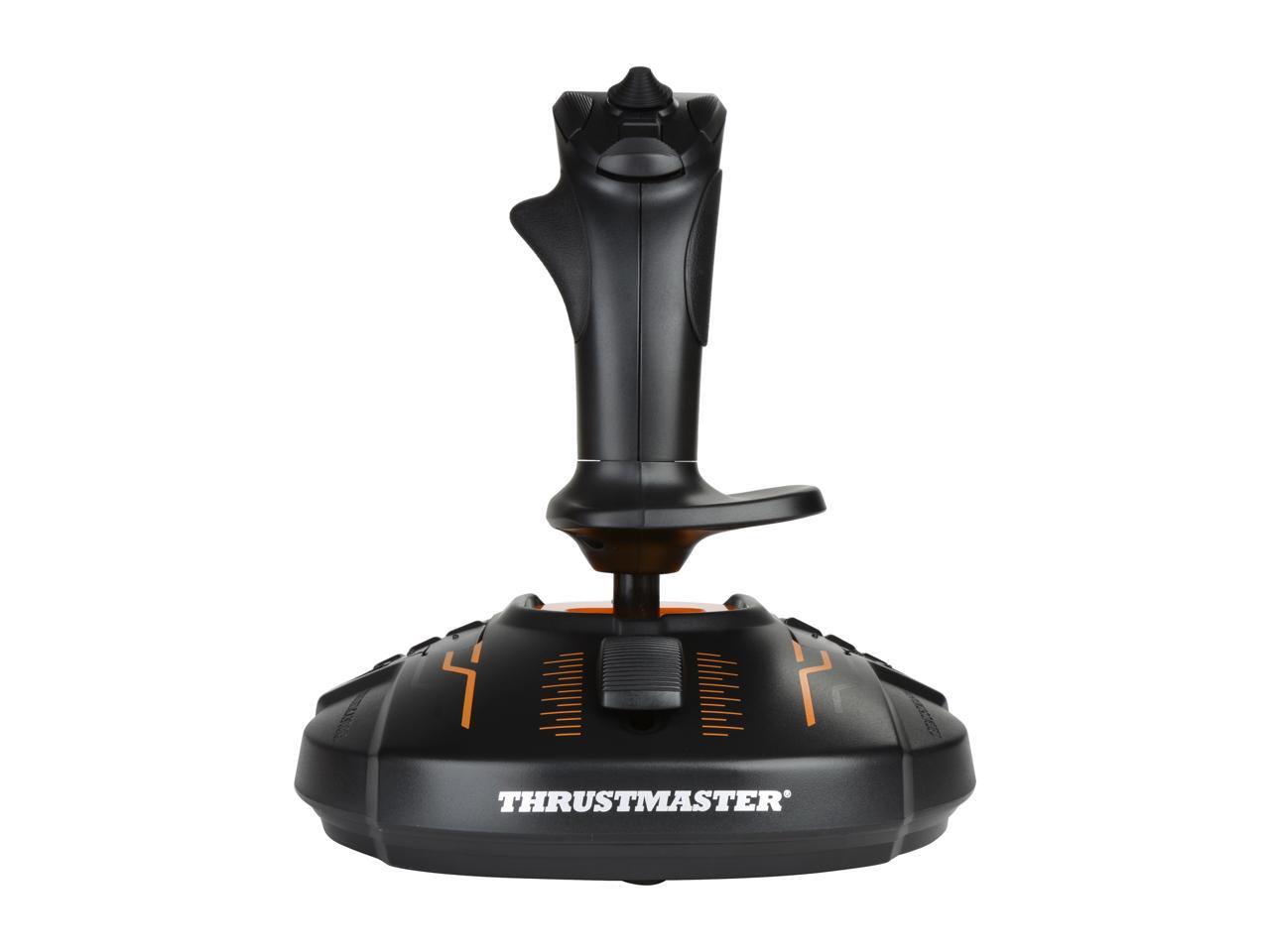 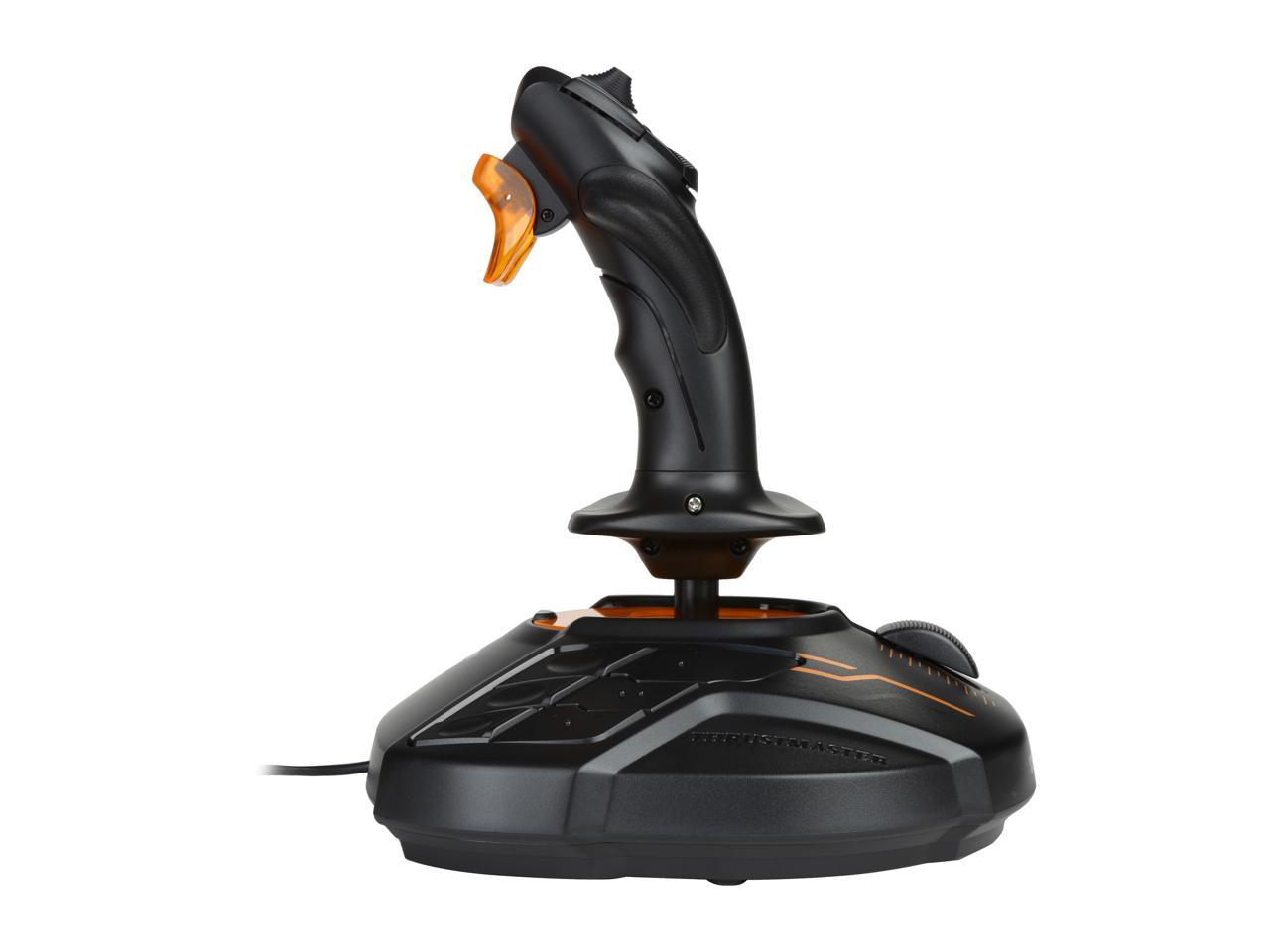 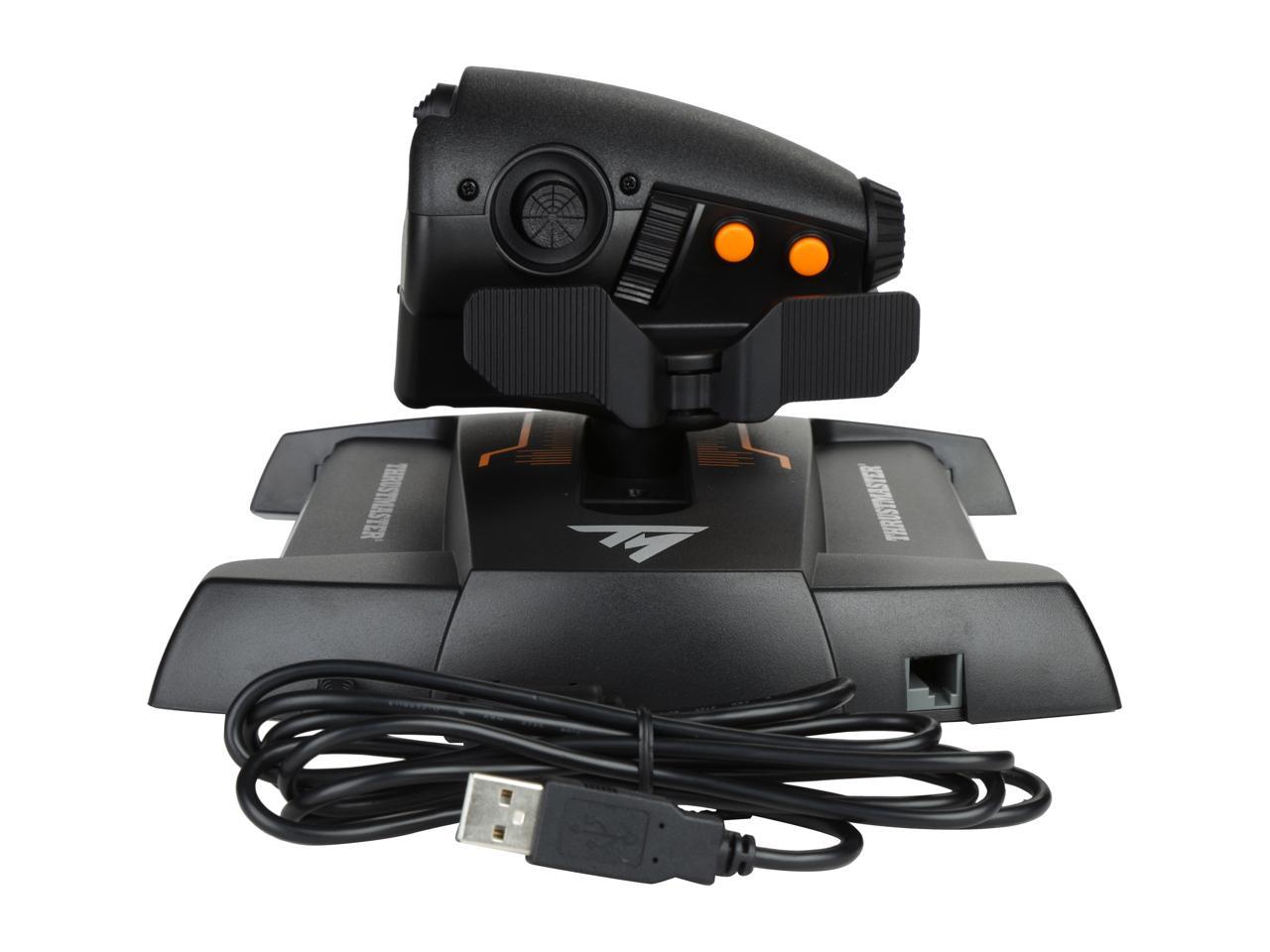 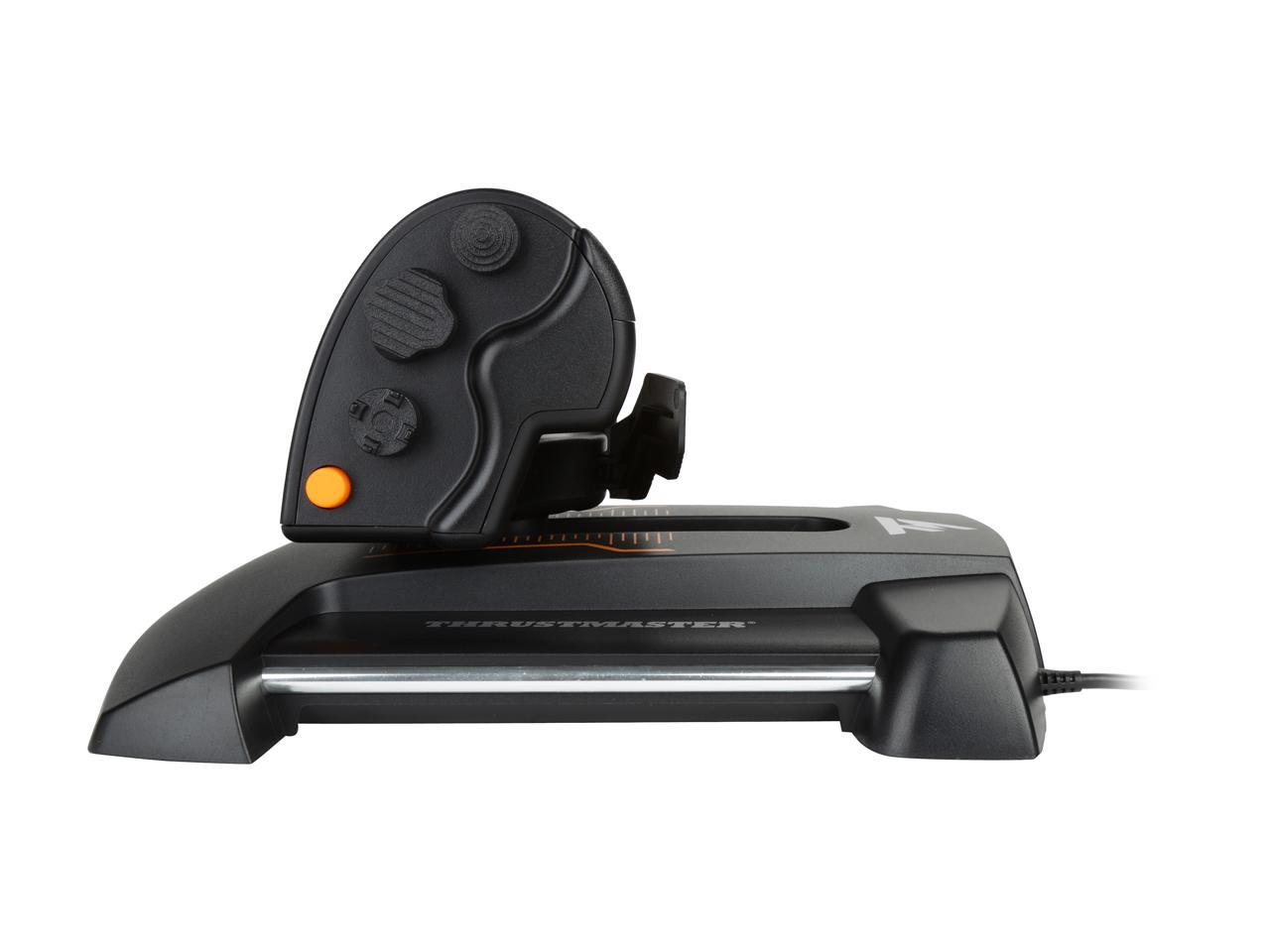 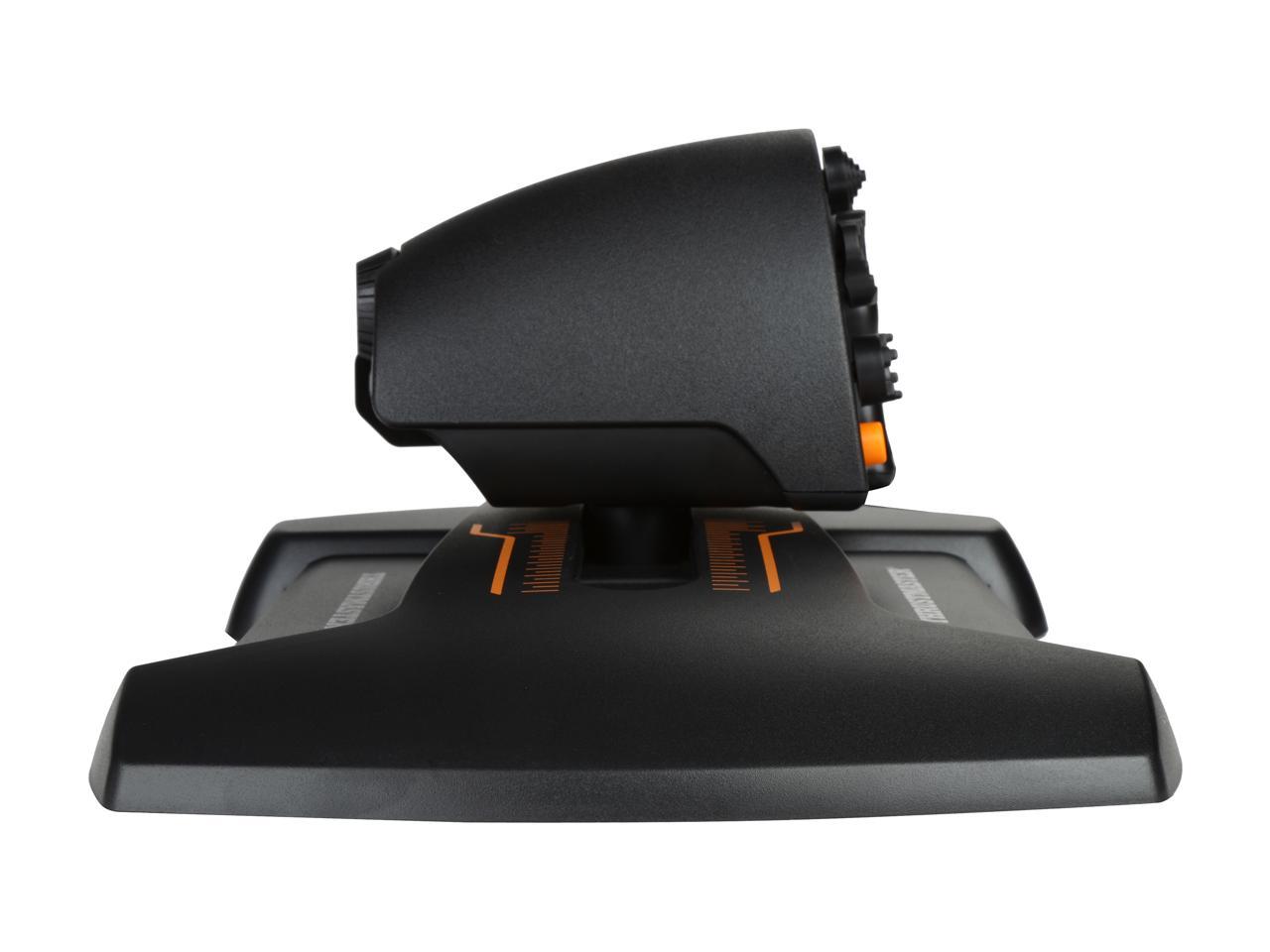 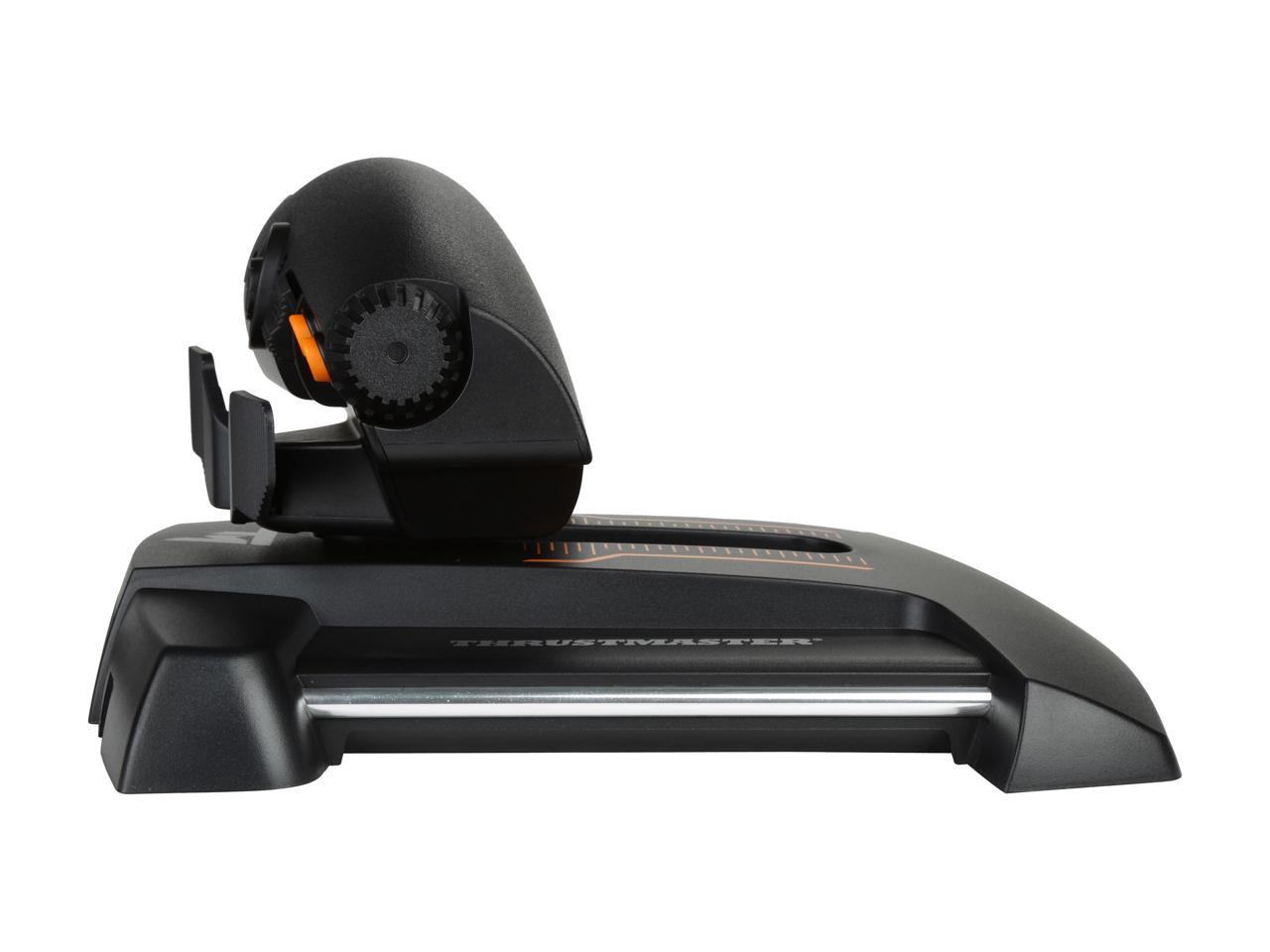 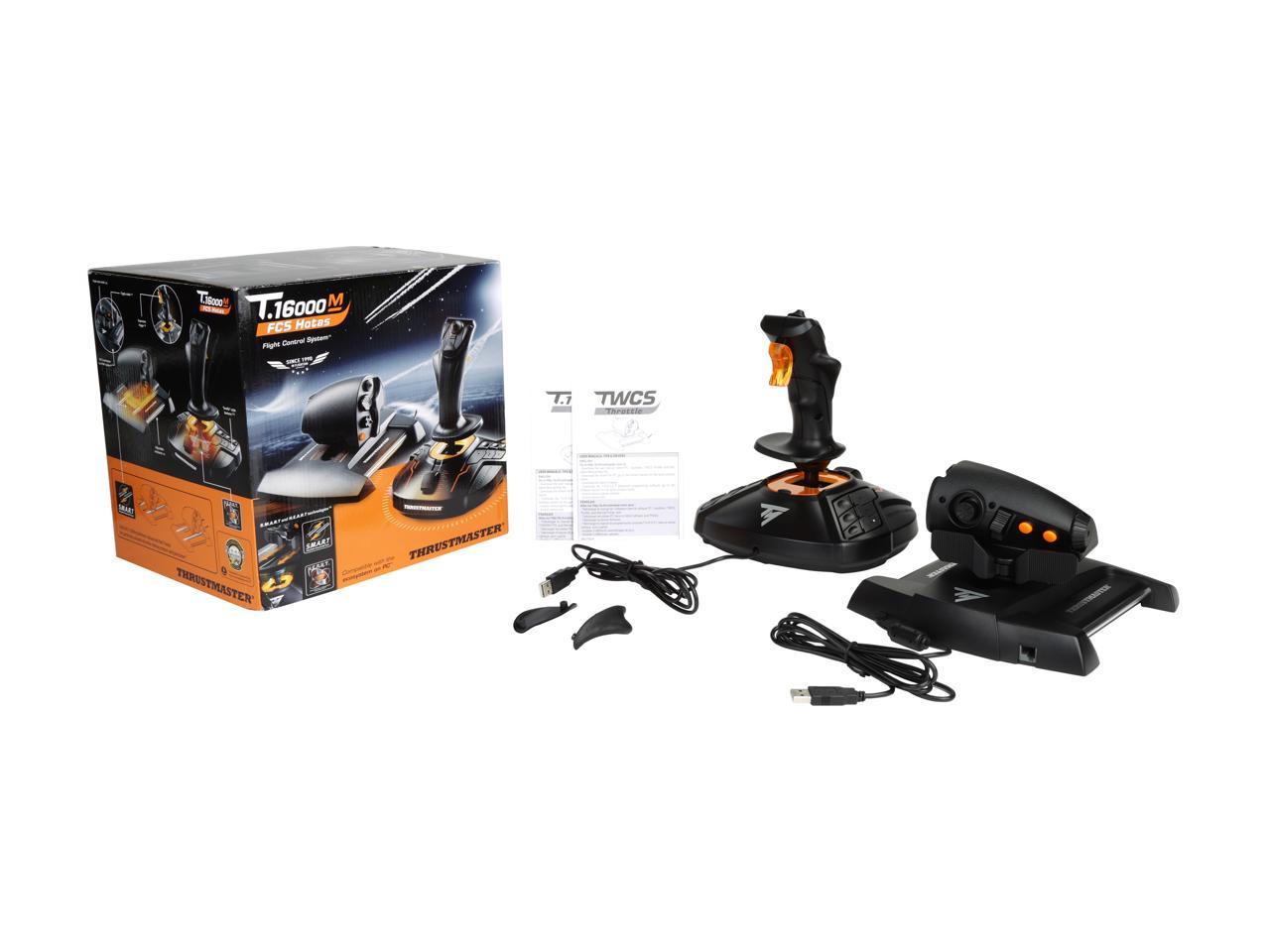 Pros: - The joystick is the same T16000m that's been around for years, just has had a cosmetic upgrade. This is a good thing, as while it isn't a high-end joystick, is has the same sensors as the (vastly more expensive) Warthog joystick - Throttle has an analogue rocker that can control vertical/horizontal thrusters - Plentiful buttons/switches on the throttle - While made of plastic, it is still fairly solid-feeling, and seems well-built -The T16000m is one of the few joysticks that can be configured for left-handed users (it comes with extra pads to change to a left-handed layout)

Cons: - While the T16000m joystick has great sensors, its button placement is still pretty bad. The buttons on the base make sense if you're using the joystick with both hands, but the buttons (and throttle) on the base of the joystick are mostly useless on a HOTAS. They should've re-designed it, rather than just change cosmetics. - The throttle has no centre detente. This is a pretty big deal for me, as it can be annoying trying to figure out if you're at 0 thrust (this is only applicable in space sim games where it's a full range throttle - in normal flight sims, where only forward thrust is available it's not an issue). However, seeing as this was pretty much released/designed for Elite:Dangerous, the lack of a centre detente makes very little sense.

Overall Review: - This is probably the next step up for people who bought the budget T-Flight HOTAS X. The only other HOTAS that is close in price is the Saitek X-52 (regular, no pro version), and that has known quality control issues. - If you're playing a space sim game with forward/reverse throttle, you may end up having to find a way to get around the lack of centre detente. I simply set mine to forward thrust only, and yes the rudder flap as forward/reverse thrust.

Pros: I'm a causual "hardcore" gamer. I am big into flight sim and racing sims. I have been using a combination of an old Microsoft Sidewinder FF2 and a Saitek X52 throttle. The X52 stick blows and I never liked it. I recently started ED Horizions and found my setup lacking. After looking at some reviews...wow. The accuracy of the stick is amazing. I was leaning towords the Warthog but don't have the room for pedals. A buddy has a full on flight sim cockpit and from a quick eva, this stick is as accurate. build quality is good and weight is nice and bottom heavy. Nothing bad so far, just the usual getting used to a new stick. Sliding throttle took a bit of getting used to after years with the X52 but a cpl hrs and its like second nature now. Love it.

Cons: Cons, not much...if your used to a super light spring then be prepared for some discomfort. I put in about 4 hours of ED tonight and I can honestly say, I can feel the ache. It's not bad, but then again, I've been using an X52, Sidewinder FF2, and a combination for a while now. If your playing a lot of DCS helo you might want to invest in pedals if you can. The twist is pretty stiff. Even with these "cons" I'm still 5 of 5.

Overall Review: Great stick and worth every penny so far. Easy setup and the accuracy compared to the X52 and Sidewinder FF2 is incredible. 100% recommended.

Pros: Tons of well placed switches on the throttle. Switches have nice feel when cycling them, and the unit just feels well built as a whole. Joystick feels wayyy higher quality than Saitek X52 Pro. Tight springs, yet the base is heavy enough not to flop all over your desk when you're getting a little rough with it. Dual USB so no stupid proprietary cable to link the stick and throttle.

Cons: Not enough buttons on the joystick itself, too many on the base. Two delays on release (irrelevant if you did not preorder, and actually more of a pro because Thrustmaster refused to release a product that was not quite ready)

Overall Review: I only use this HOTAS for Elite Dangerous. Preordered this unit because I was sick of typical Saitek problems. Glad I did. It's a bit strange to get used to the simple joystick, but the throttle more than makes up for it with its numerous well placed switches. I particularly like the analog stick for thrusters. Got a busted Saitek? Looking to keep it close to $100 for a really good HOTAS? Look no further. My Saitek is not even broken, but it has been retired as of today. Only took a few hours to get fully used to the button layout because the button layouts are so sensible. Highly recommended after first day of use.

Cons: Buttons on base of joystick could be moved to the stick itself (I know this would lead to left hand/right hand use issues) Grease could be of a better quality. No centre detent on throttle.

Overall Review: I would recommend this to anyone looking for an intermediate level HOTAS. I purchased this to use with Elite Dangerous and my Oculus Rift and have found that trying to use the buttons on the base of the joystick to be a pain, which has been remedied by using Voice Attack for those particular buttons. Overall I am very happy with my purchase, even with the couple of cons.

Pros: o I find it very easy to set up, software from Thrustmaster increases the functionality and flexibility of this joy stick throttle combination, o Solid construction, buttons are well place and the base is heavy enough that unless you are really intense it stays were it is o Price point is a winner. for what you get this controller stacks up to controllers that are double the coast of this one.

Cons: o Maybe a couple of more buttons but i don't consider it con in my opinion but some may.

Overall Review: I use it for Elite and Dangerous and it fits that game like a glove. I like the plug and play and the controllers are separate with for increases player comfort by allowing you to place each one were you want to.

Cons: The rotational axis on the stick and the rudder have become erratic after 5 months of use.

Overall Review: Accurate if not durable. I expected it to last a few years for the price. Didn't last 6 months.

Pros: Probably the thing I like the most about the Thrustmaster is the T.A.R.G.E.T. software. It is intuitive, but takes a little time to fully understand all it's functionality to be able to really unleash its full potential. Once you do, it's remarkable how much one can set up the HOTAS to do everything one could hope to do. The stick and throttle themselves respond very well to input. The is a plethora of buttons to set things up the way you desire. The stick also has a reversible rest that is nice if you are left handed.

Cons: The only thing I wish I could change about the system is, I wish the stick had more hat switches. There is one to use with your thumb, on the stick. And the throttle has three. But it would be nice if the stick had at least one more, preferably two more.

Overall Review: As I said, I currently own three of these setups. I also have two peddles to go with my whole system. I use the setup for Space sim games. I have enjoyed these HOTAS's for about 6 years now. Still working strong. I have tried other HOTAS. This represents a nice sweet spot. There are some that are more expensive, and offer more features. But I have found that those setups aren't worth the extra cost, unless you are a die-hard flight sim player with perhaps a simpit setup. And if you are, this review is probably irrelevant to you because you are already aware of everything available on the market. There are also cheaper options. But I have found they either don't offer the options this system offers. Or they don't hold up as well under years of vigorous use.

Pros: All the controls and buttons and options you could ever need.

Overall Review: I love the throttle. It's full of buttons and options which are well-placed and built well. But the stick...ugh. Why so many buttons on the base and so few on the stick? And the buttons themselves just feel cheap. Clunky and awkward. On top of it all is the failure of the twist sensor. 3 times now I've had to take it apart and blow contact cleaner through the sensor to stop it from registering inputs I didn't make. To their credit, you CAN take it apart fairly easily, but you shouldn't have to. It's like the stick and throttle were designed by separate companies. All the elements of the throttle have a natural, intuitive placement. You can use your whole hand without looking, with most controls available to your most dexterous fingers. And they feel nice. But the stick has only one job for your index finger, a few jobs for your thumb, and a bunch of other stuff you just have to flail at.