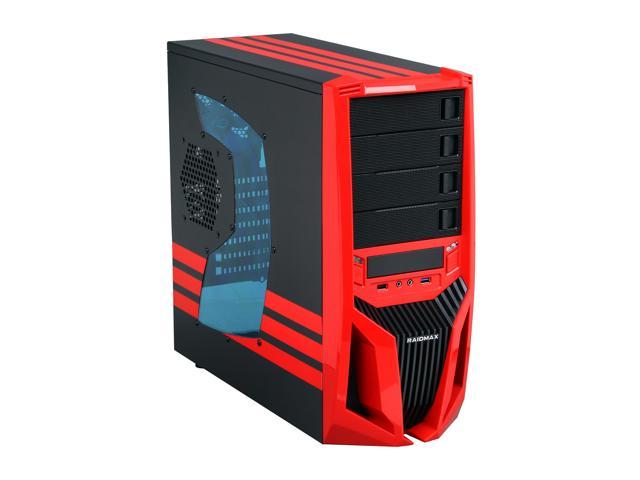 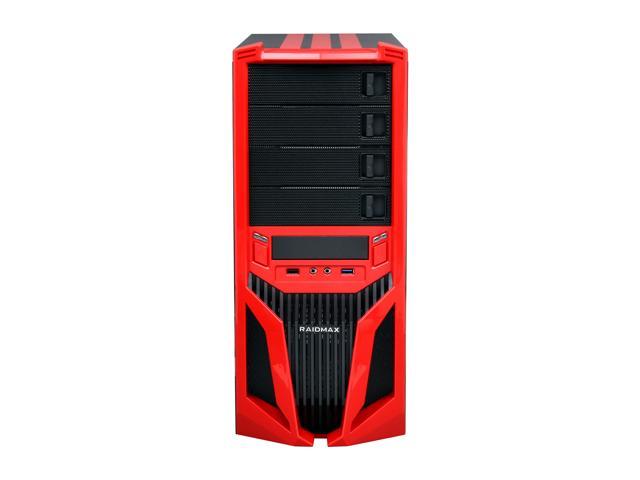 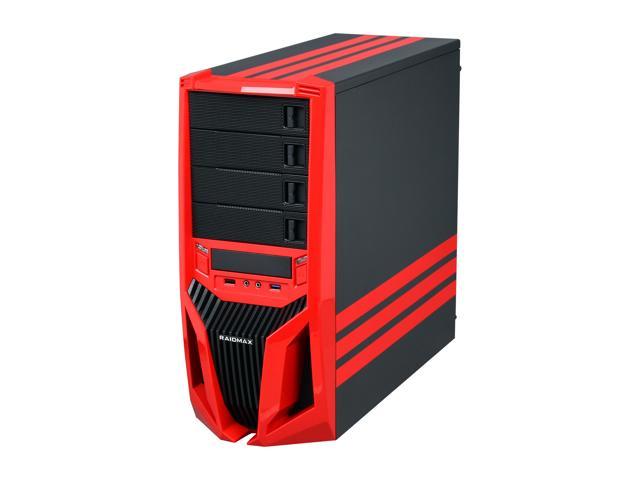 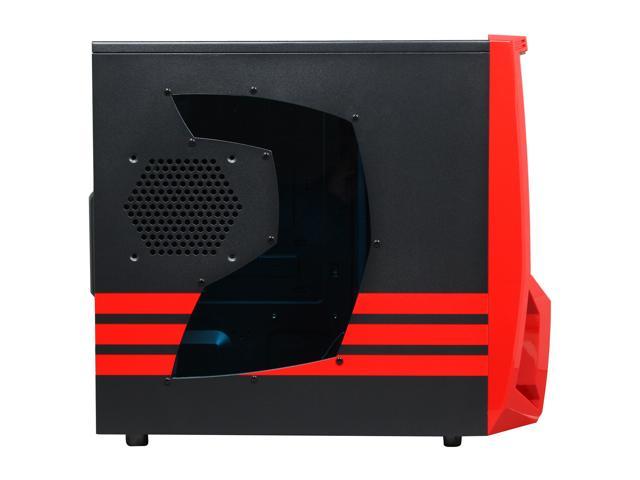 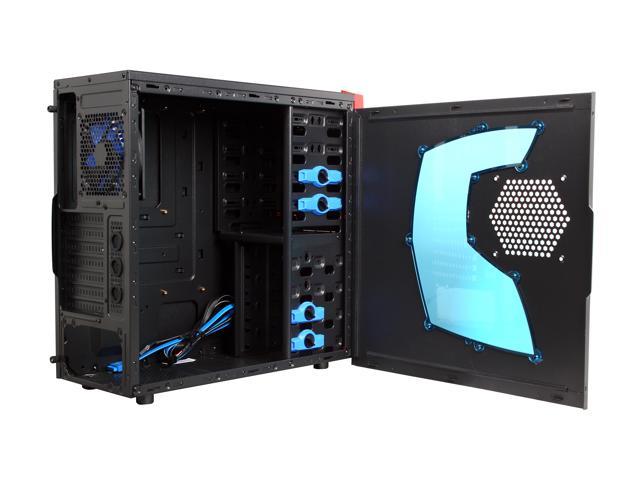 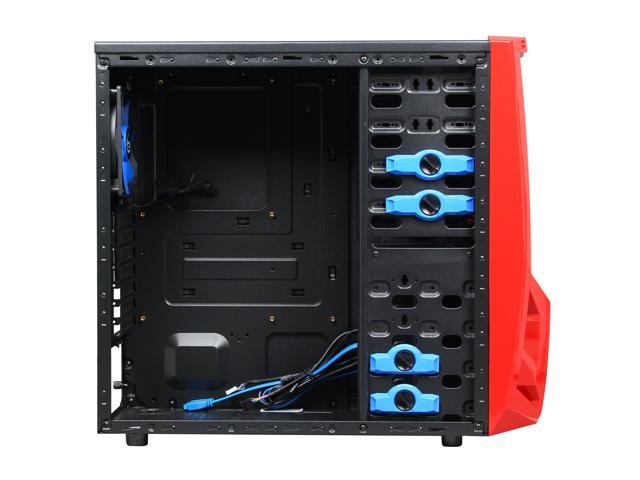 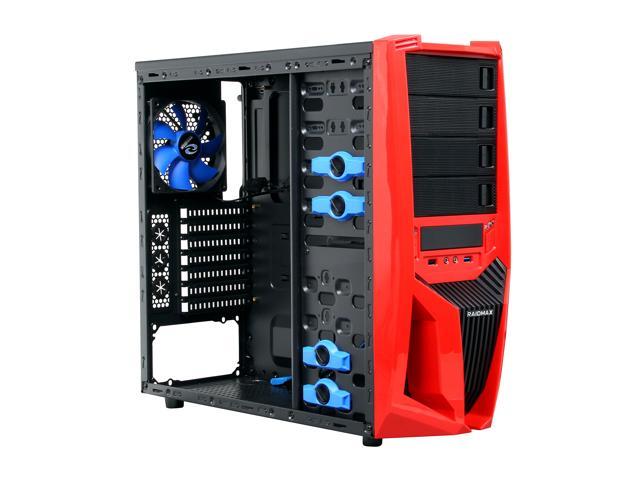 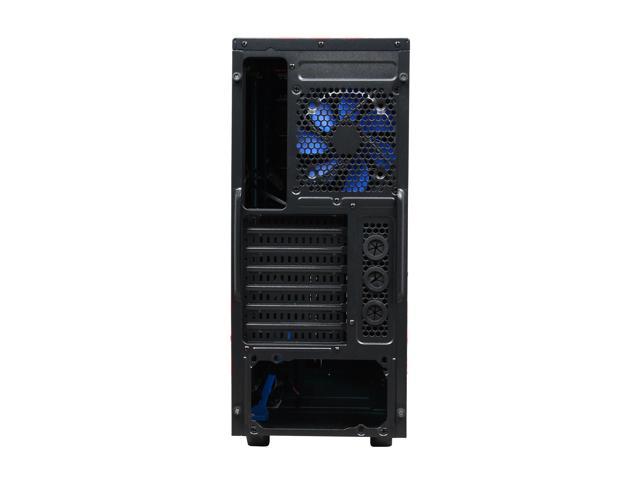 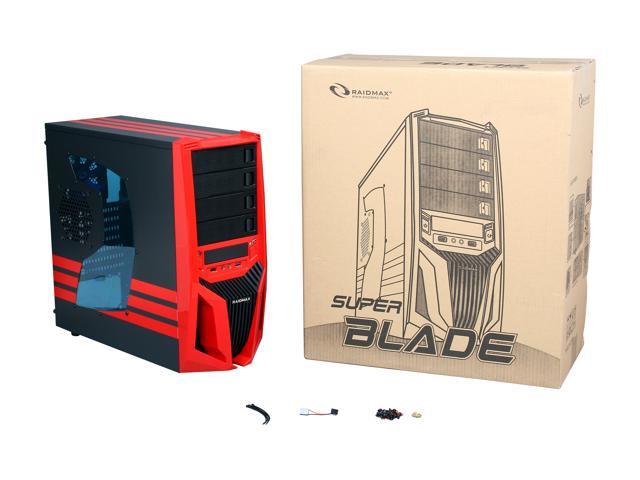 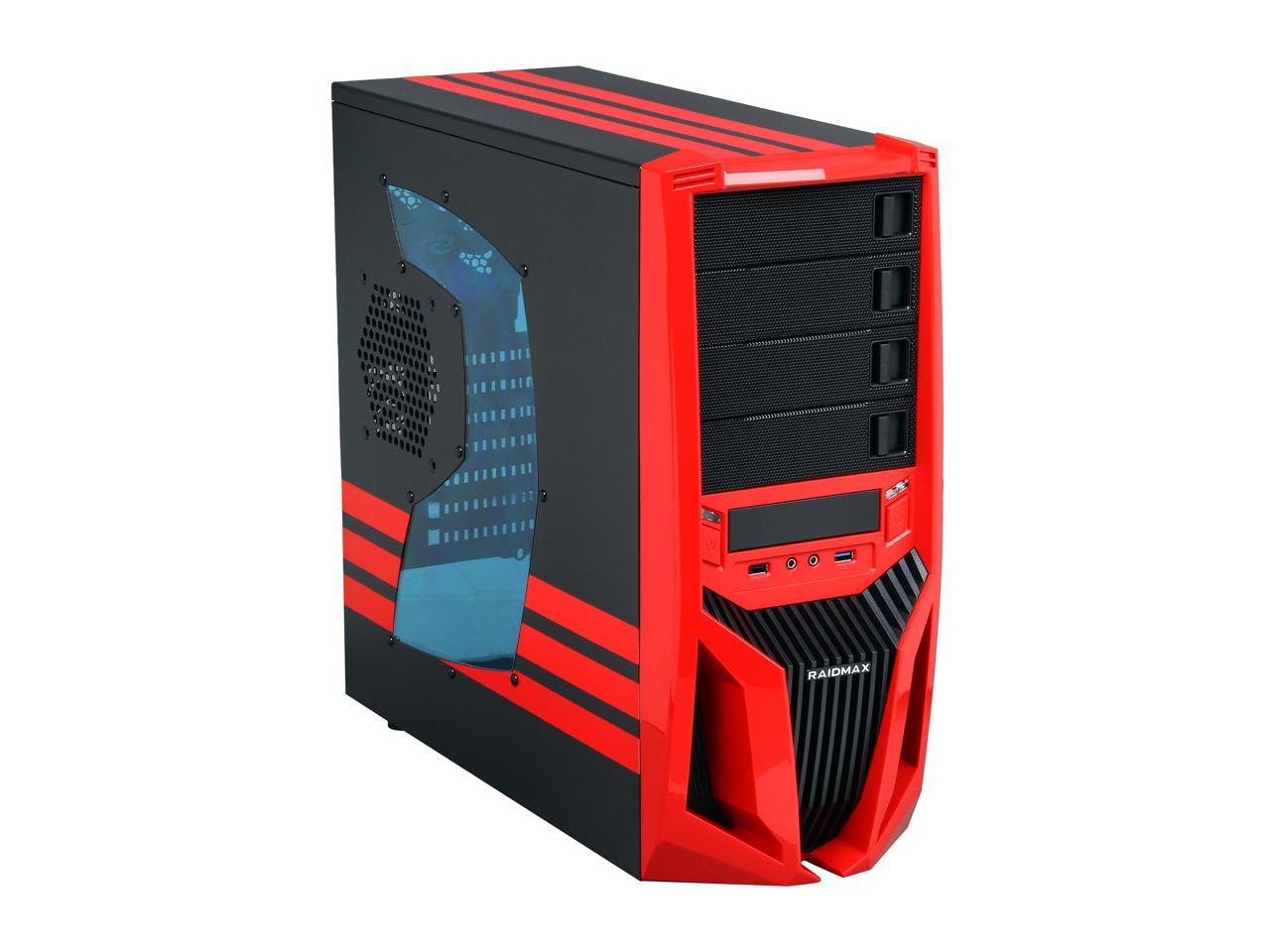 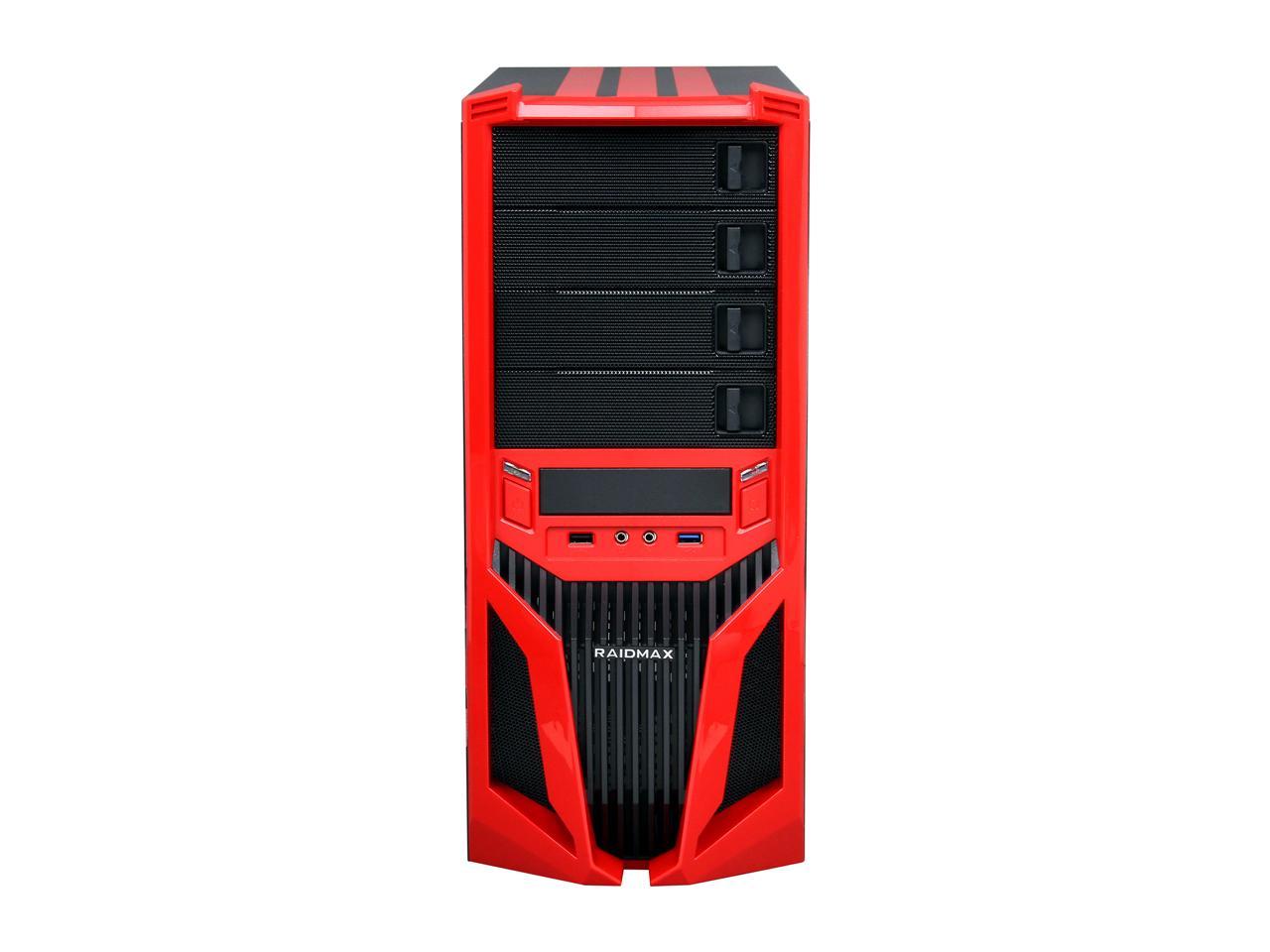 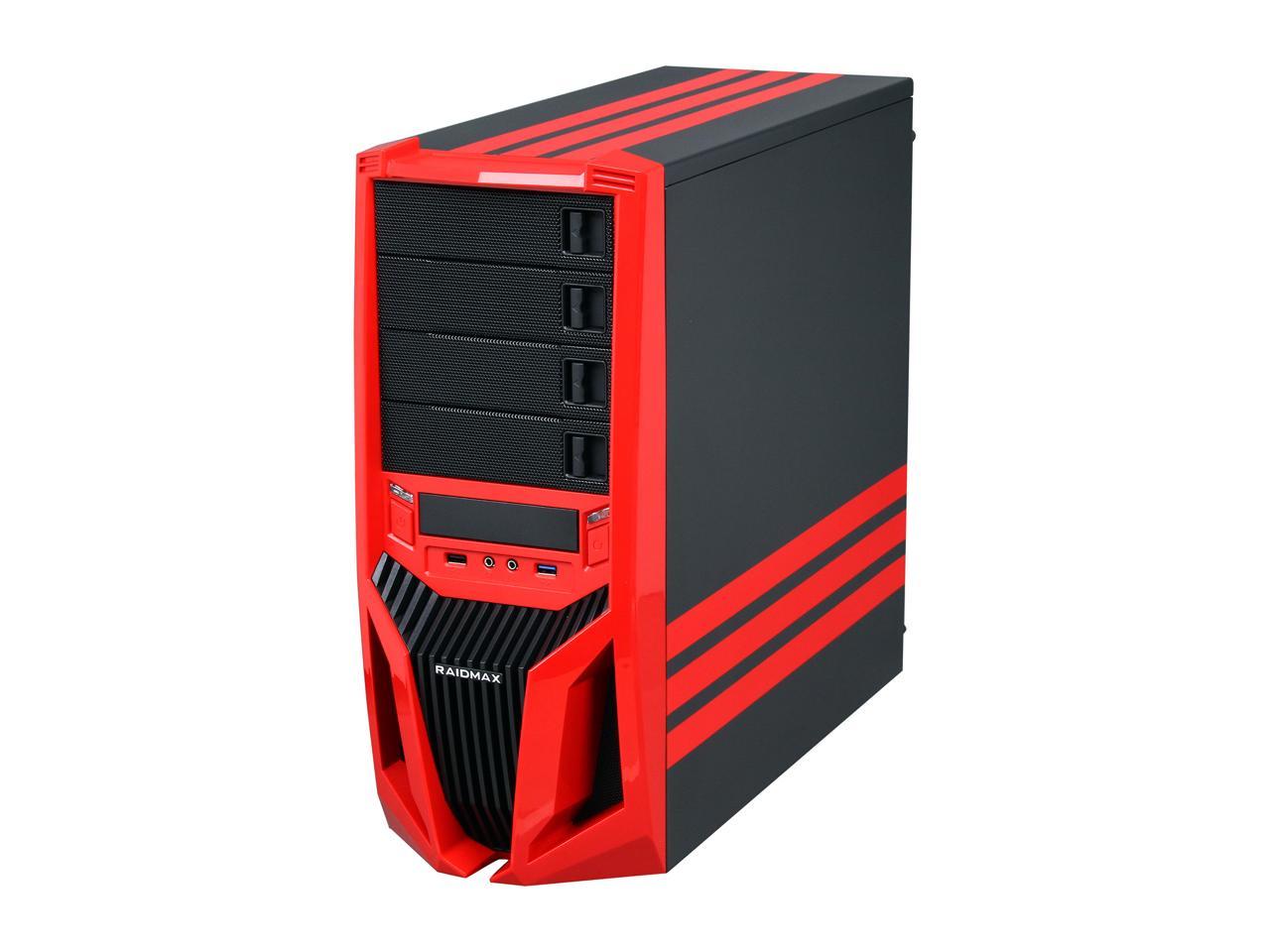 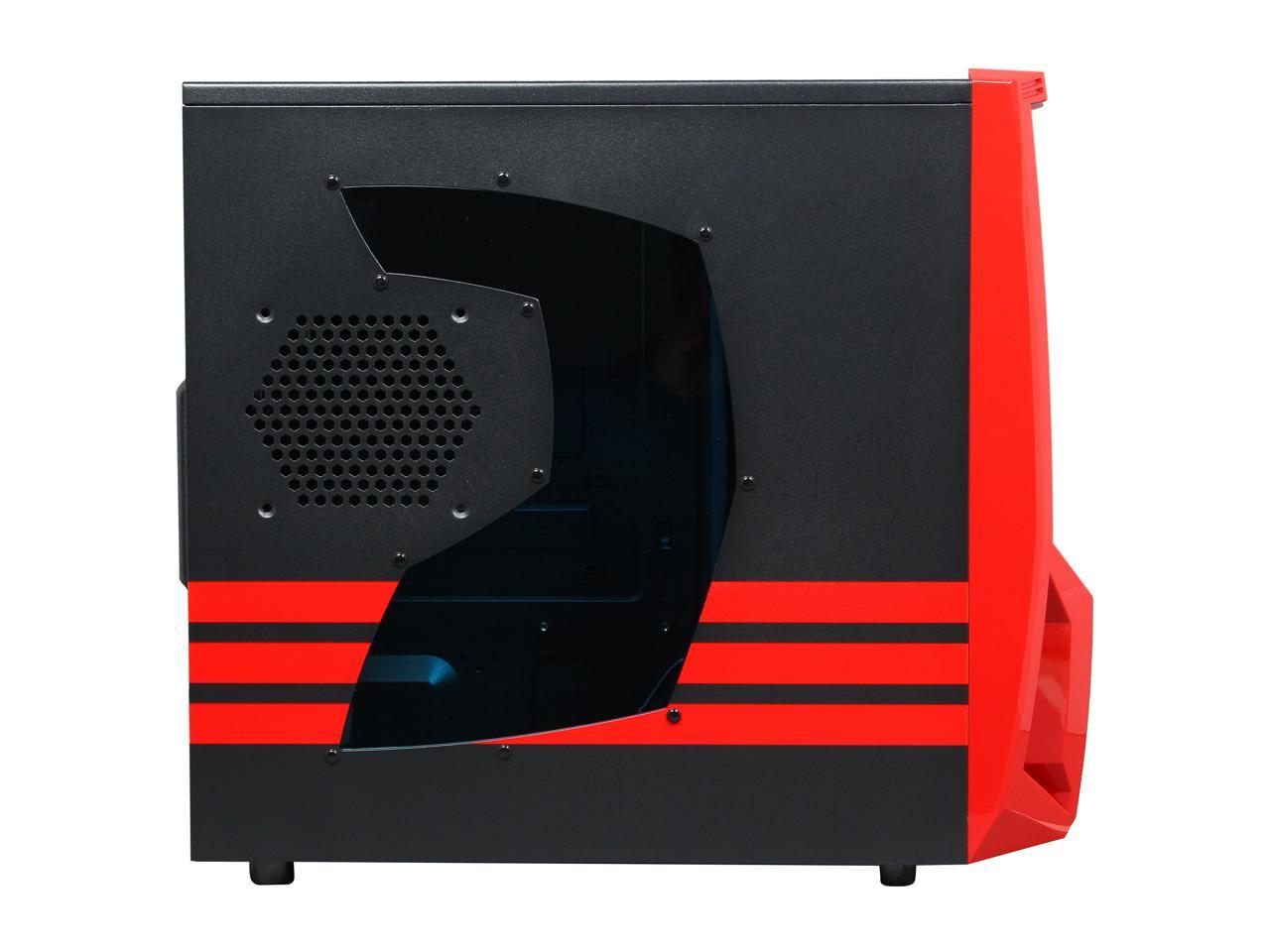 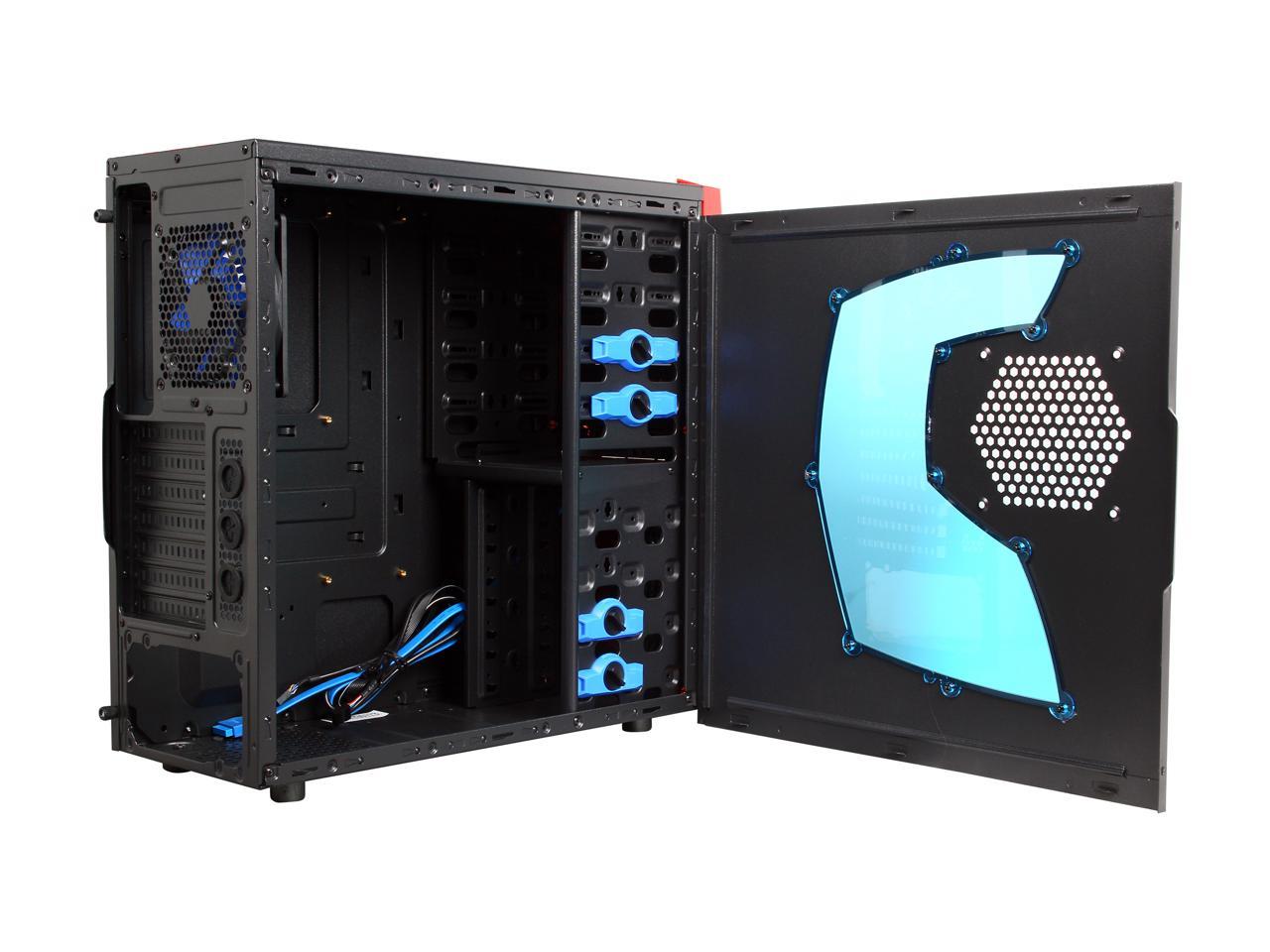 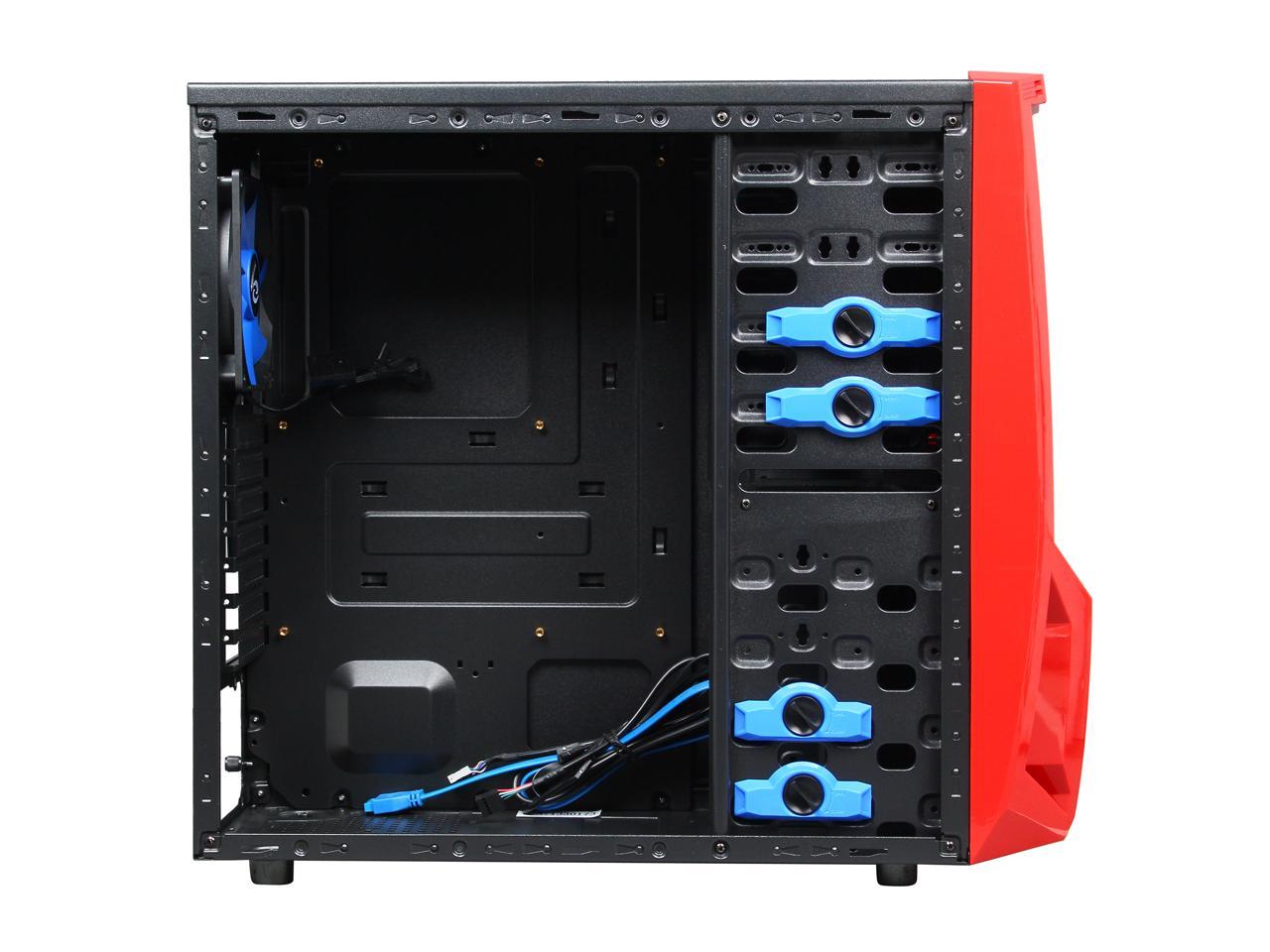 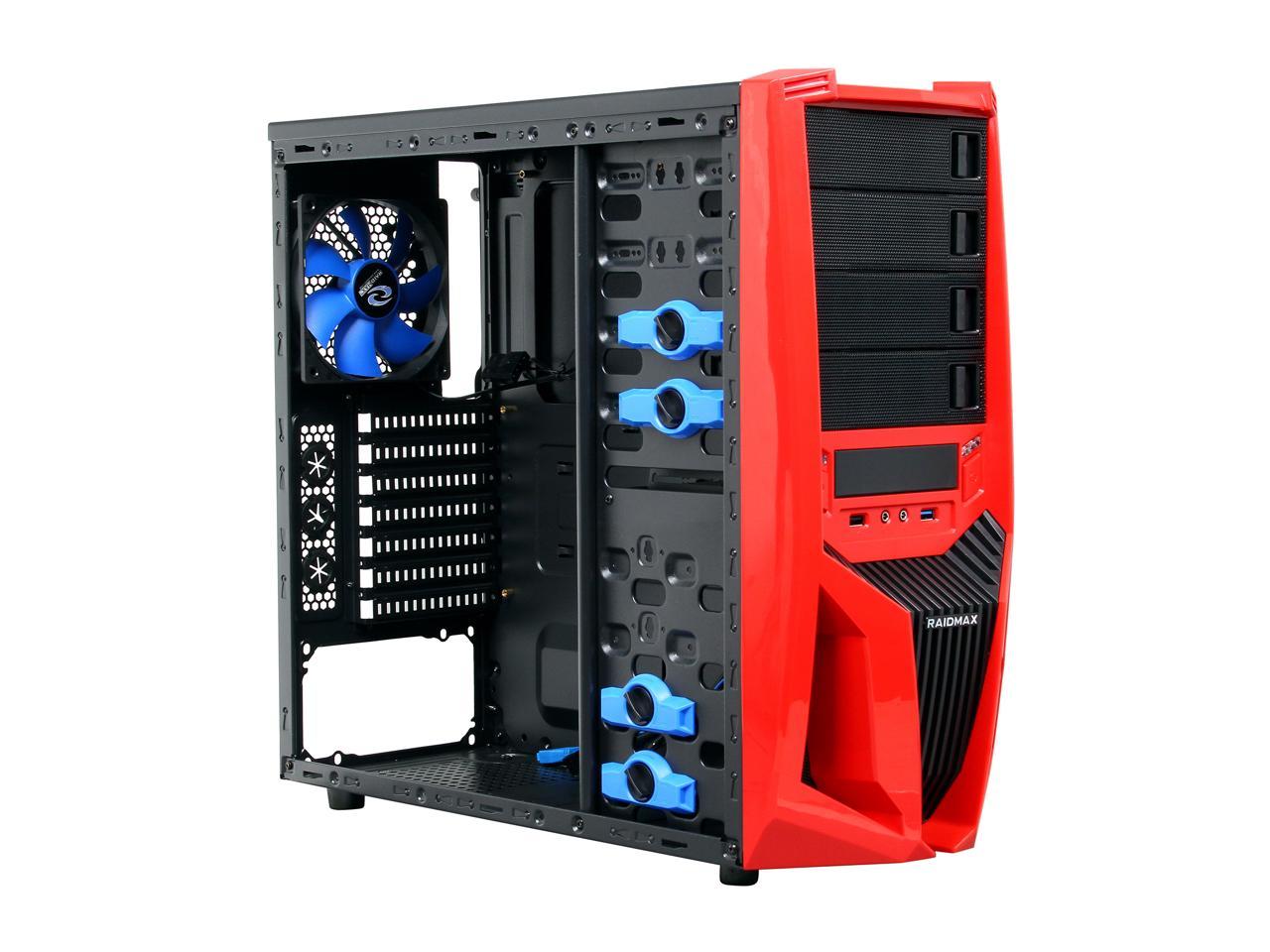 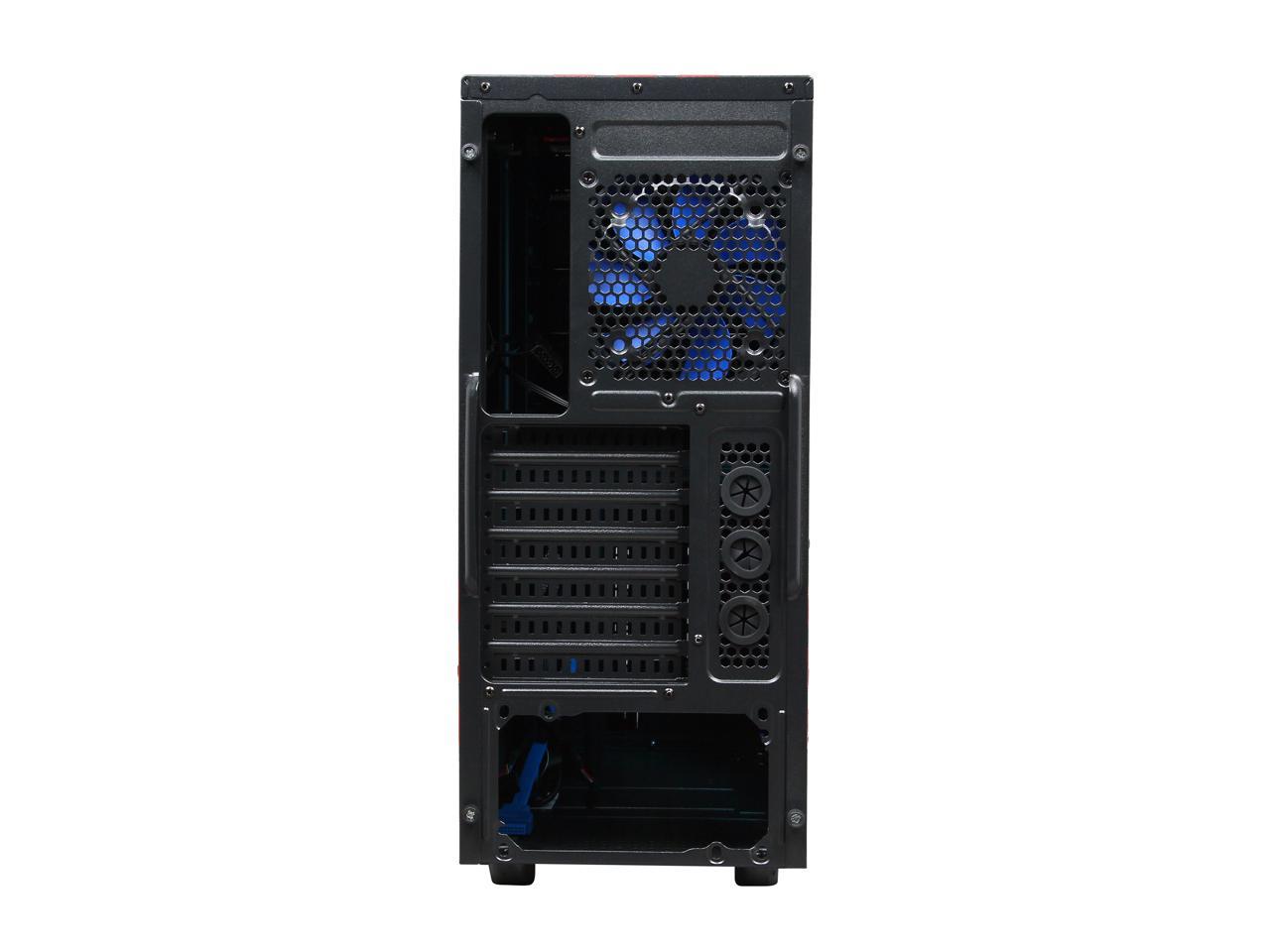 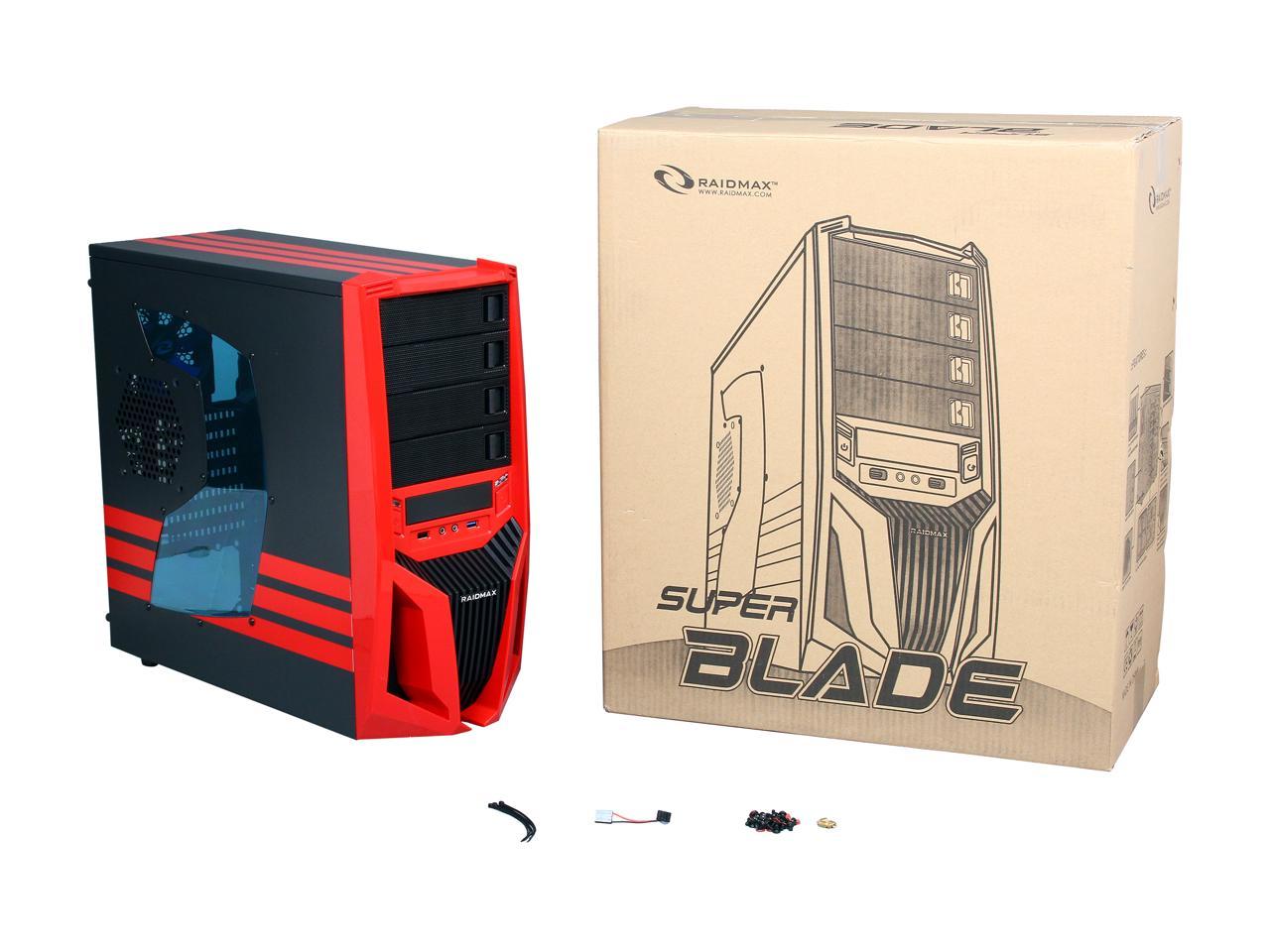 (123) Write a Review
OUT OF STOCK.
Overview
Specs
Reviews Robot-modeling front panel with one-click 5.25in. drive bay cover design along with up-to-date tool-free installation lead you into the new epoch in the PC-building world. Maxi meshes are located not only in the front but also in the back, with a bottom-mounted power supply for improved cooling and ease of installation. Blade introduces the one and only spirit, an original, from Raidmax.

Pros: It has a lot of room for upgrades, Tool less design very useful no loose parts, The fan built into the case is very quiet, the front panel easy removal and great looking, Love the fact the PSU slot lays on the bottom, love the towers design including the feet holding the case off the floor, I do prefer this steel case over aluminium style, The case does feel quiet durable,

Cons: Doesn't go into the kitchen and make me a sammich...Other than that this case is wonderful for the price.

Overall Review: If you do get a correct bottom mount PSU, I Bought RAIDMAX HYBRID 2 RX-630SS 630W Micro ATX Mother Board Currently It does all fit together well no cord cluster, the extra LED from the power supply does make the case illuminate really well, I was was worried about the fact it was bottom mount PSU at first, but the PSU Stated above worked wonderfully.

Pros: Good box packaging, not a lot of rattling parts. Good ventilation. The paint job seems solid (no sign of fading or peeling, even when I tried to pick at it). Toolless entry (for both sides of the case). Rounded edges. The case came with plenty of screws, brass standoffs, and even a few cable ties. It has a window on its right-hand side from which you can view inside of the computer (especially nice for motherboards that use LEDs for error codes). The front mounted USB 2.0 ports work nicely and give plenty of space work around. LED is on the front, near the intake fan. Has an exhaust fan that’s rear mounted, near the I/O components. No third fan, but the case supports one. The faceplates for the 5.25 inch front bays (like the DVD drive) easily remove without having to punch them out with a screwdriver or something. You just hold the lever and move the faceplate out of the way, very civilized, and easily modifiable.

Cons: No manual, so you may have to go online to piece together whatever isn’t obvious from the installation. We installed a hard drive (actually a laptop hard drive in an adapter) in the upper most hard drive slot and while the hard drive is in heavy use, you’ll hear some slight “staticy” noises in headphones. These could probably be alleviated by moving the hard drive to one of the 3.5 inch bays furthest away from the headphone jack, but it didn’t bother my brother enough so we left it as is.

Overall Review: We were looking for a case for a budget gaming rig for my brother. We settled on this one because the price is right, and it’s the best looking case for our budget. We were a little hesitant about getting a Raidmax case at first, because a lot of their other cases have poor reviews, but this one, the Raidmax Blade, didn’t have too many reviews on NewEgg (but those that were here were positive), and it was reviewed favorably at one outside site. Perhaps it’s one of their newer models, where Raidmax is turning over a new leaf. This case is solid. Nice racing stripes really set it off. We got the red one, but the yellow one detailed on the box looks pretty slick as well. Very happy with this case and would highly recommend it.

Pros: I love almost everything about this case! It looks so sick. I love how it's so easy to buy new peripherals to go with the theme of this case. (My desk is looking pretty BA right now.) Installing my new build was moderately easy. It was my first build, so it did take a while to get together. Other than that, great case! Very happy with my purchase!

Cons: Cable management was a little whacky. Trying to get all the cords to stay together was hard with the little space they give you. I still managed though, and it breathes very well!

Overall Review: The front of the case reminds me of Darth Vader's mask.

Cons: -Tool-Less bay design didn't exactly line up with one of my HDD's but my other worked fine -Screw holes for the PSU did not allow me to to mount it fan down -Side window has some glare -IO shield didn't fit

Pros: -Very sweet looking if you have hardware to show off on the inside. -The side window is tinted pretty dark blue but clear enough to see led lights or uv glowing parts so it looks nice and not messy. -Extremely easy no tools needed except screwing on the motherboard. -One of my fastest to build cases with all of the parts from the boxes into this case in less then 30 minutes.

Cons: Everything on this case was perfect EXCEPT the front audio is grounded incorrectly which makes a static/humming noise from just the front 3.5mm jack with headphones. I recommend getting some type of extra 3.5mm front connection maybe bundled with an all-in-one memory card reader.

Pros: For the price this is a great looking case! The side glass gives a prefect view at the motherboard and the ventilation is efficient to keeping the all the internals cool. The tool-less design is fantastic, considering I'm usually too lazy to go grab a screw driver just to install a CD/DVD drive. The water cooling support is nice; however I prefer not to use it myself.

Cons: The only issue I have with this case is the fact that wire control is a bit hectic.

Overall Review: Simply a wonderful case for the price!

Pros: Holds it all, even my large GPU. Quick and easy to dis-assemble. Front LED glows blue.

Cons: Half of the HDD bays cannot be used with SATA drives and large GPU cards. They will collide.