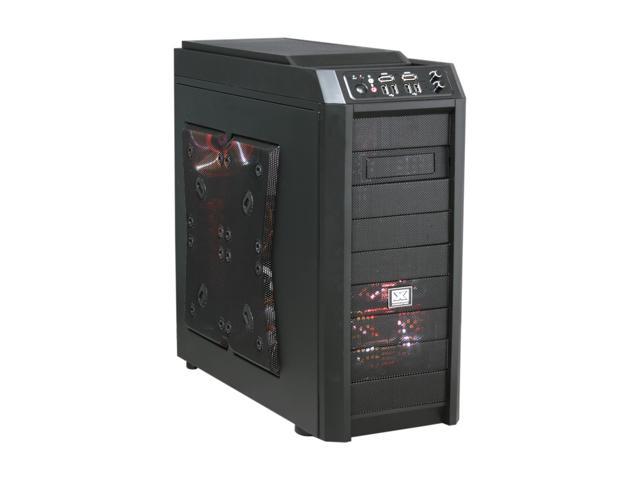 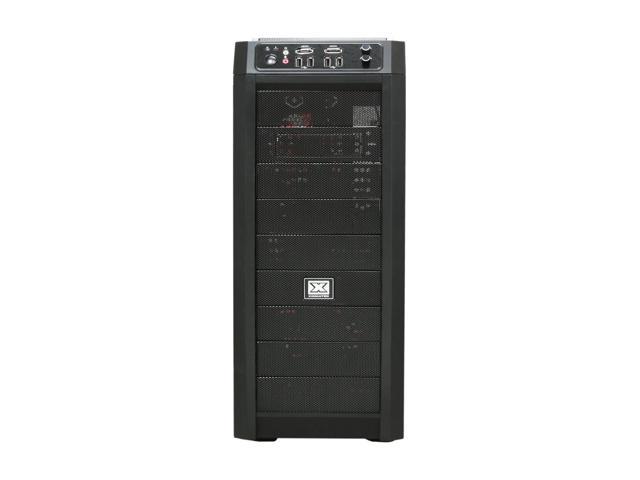 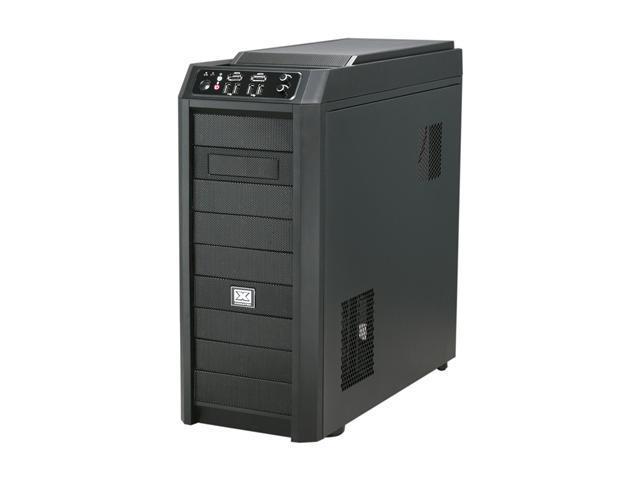 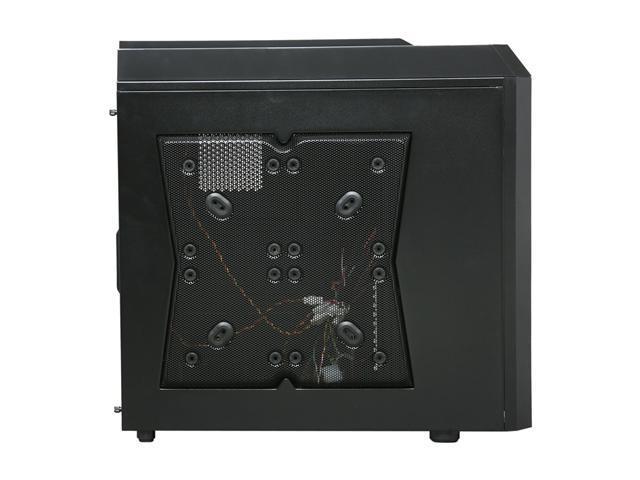 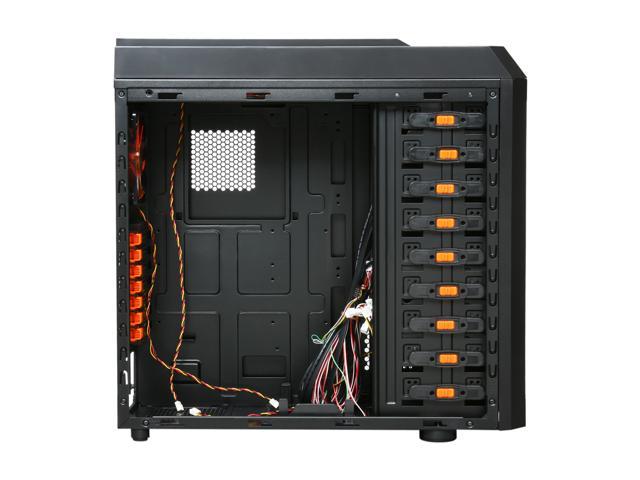 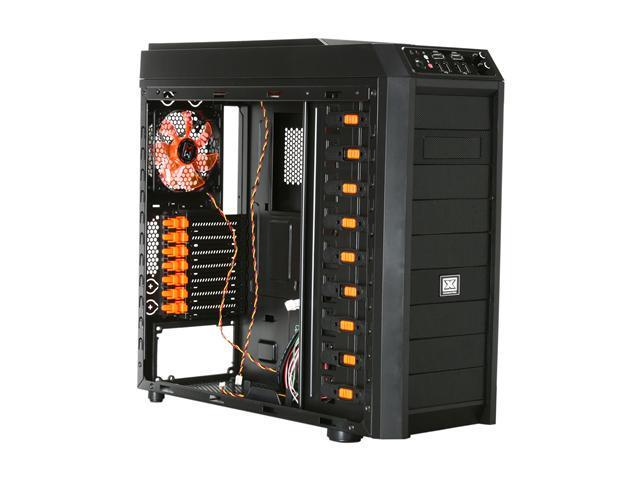 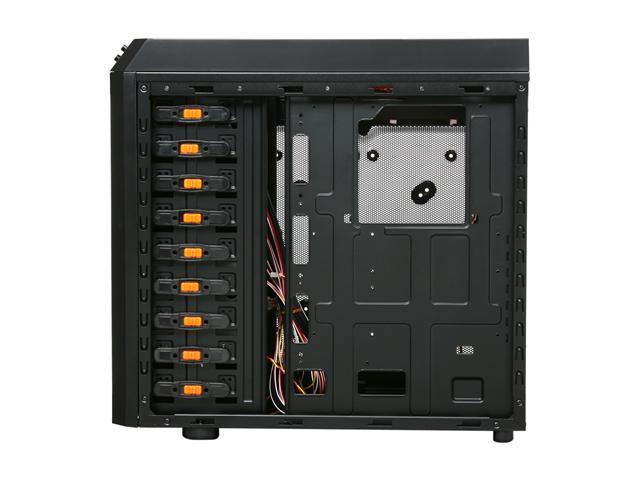 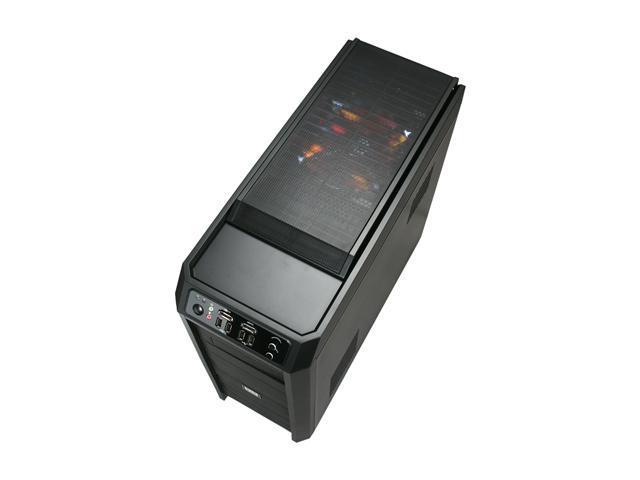 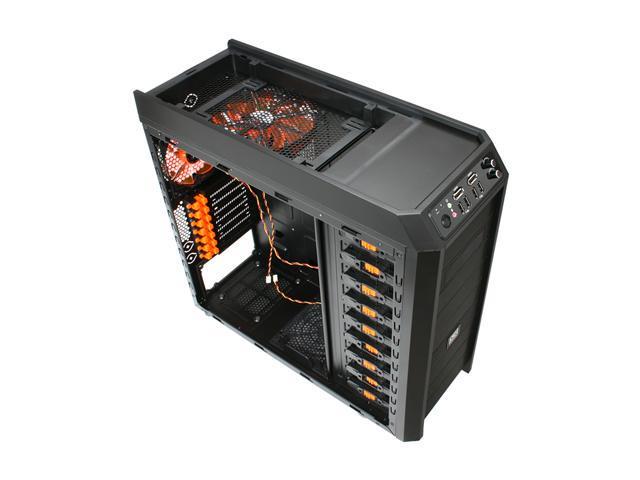 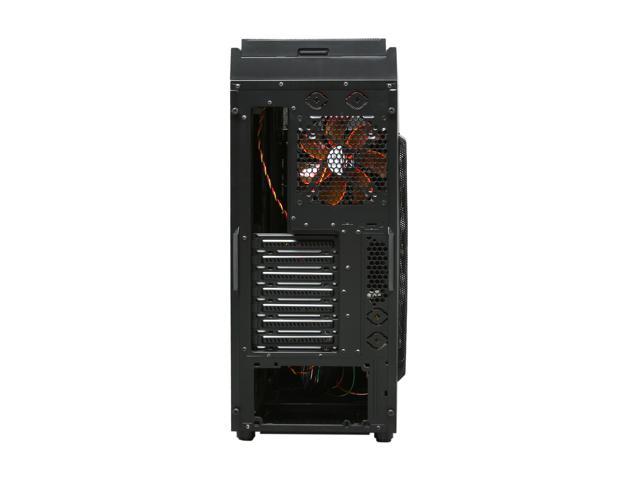 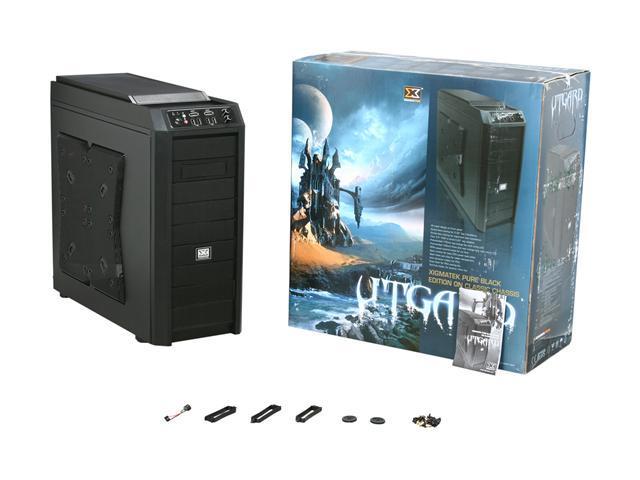 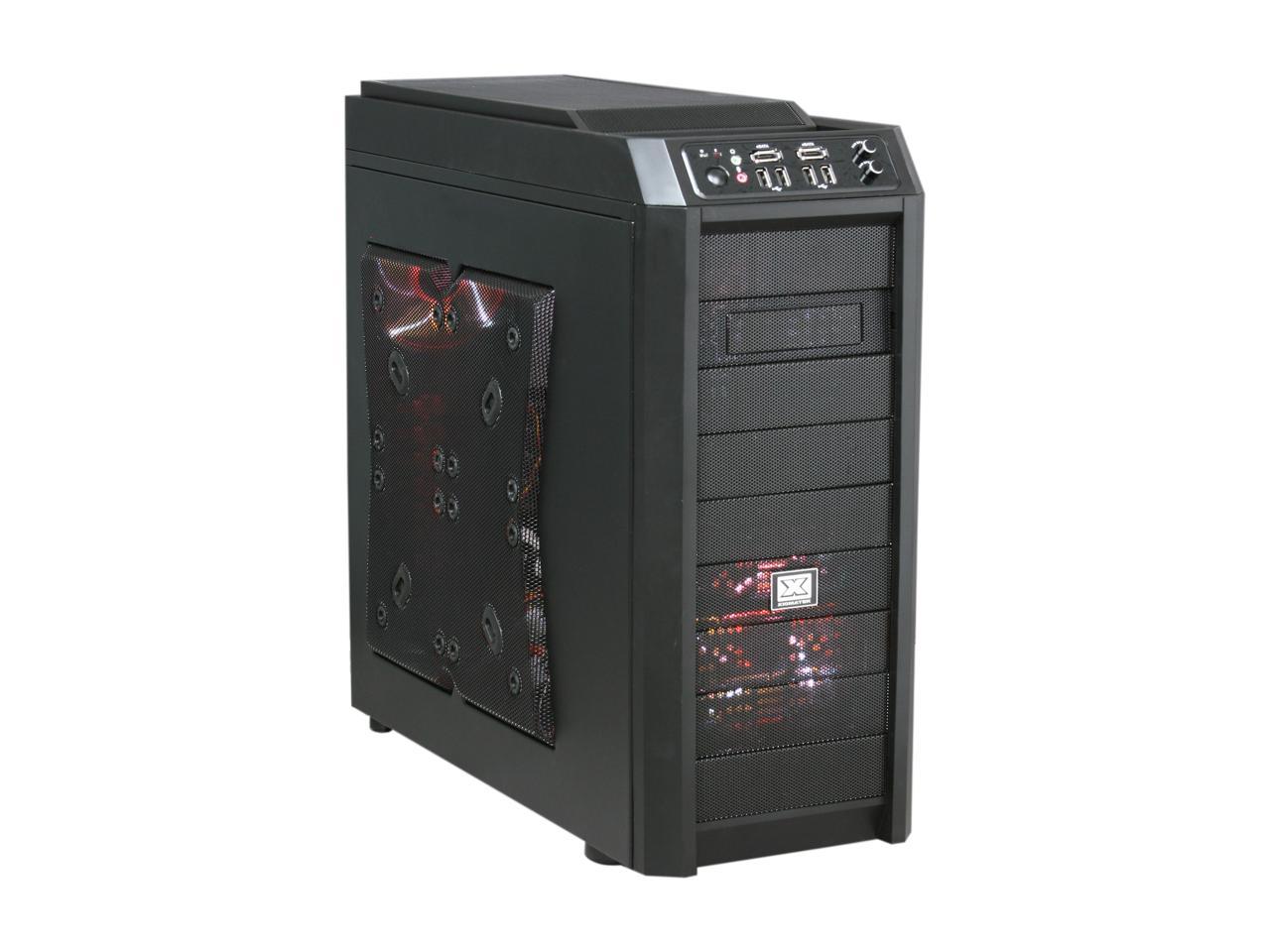 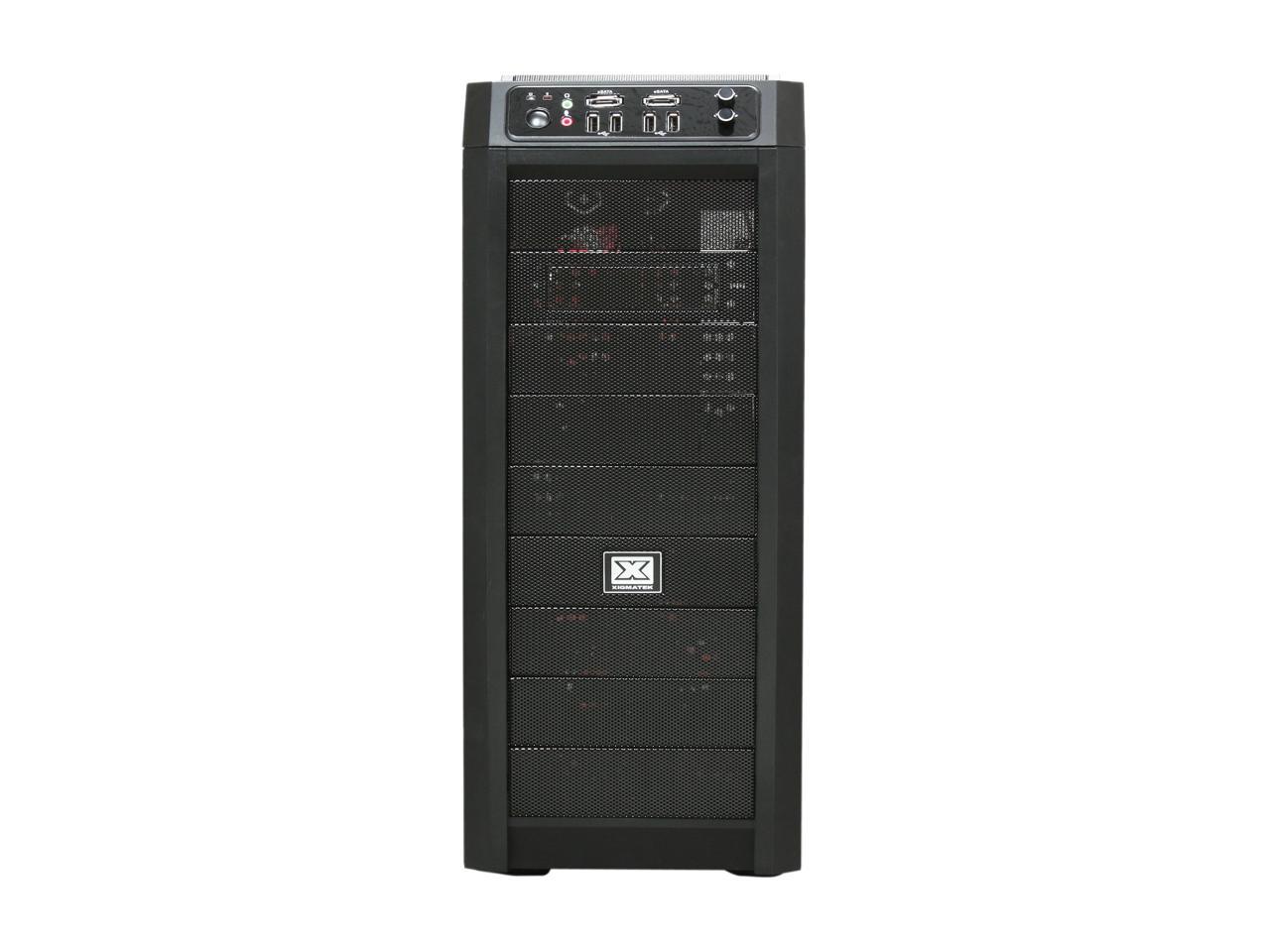 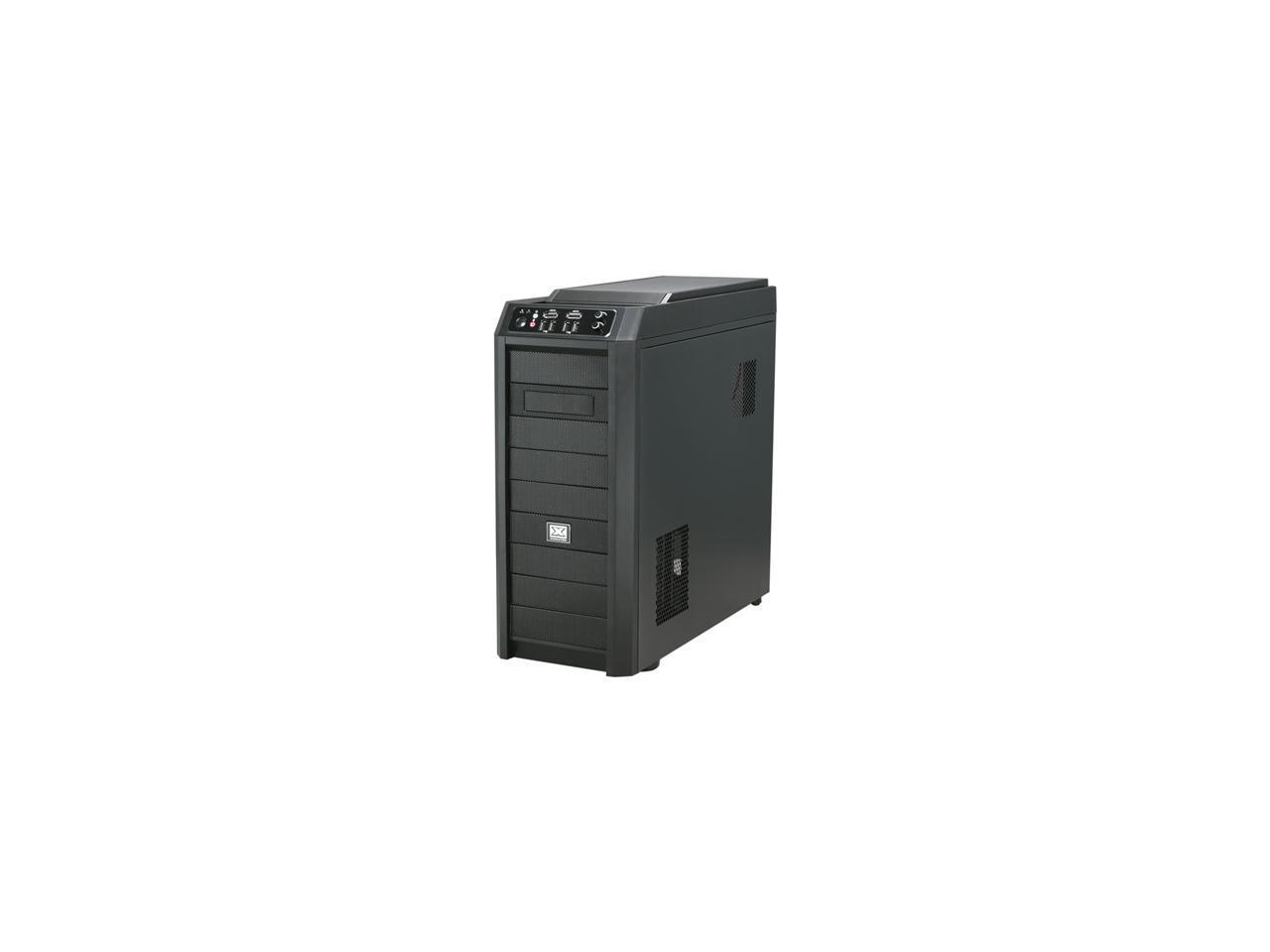 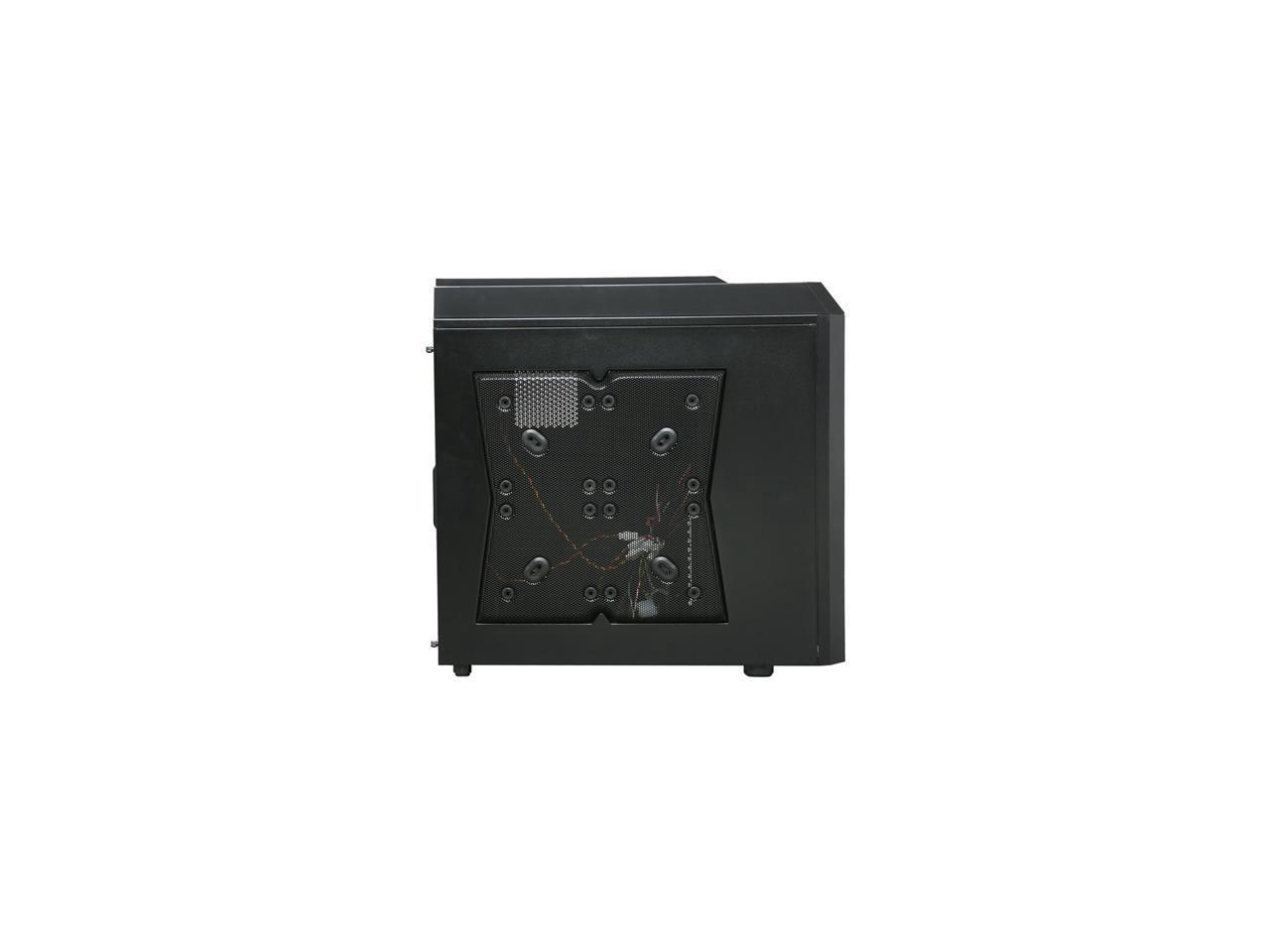 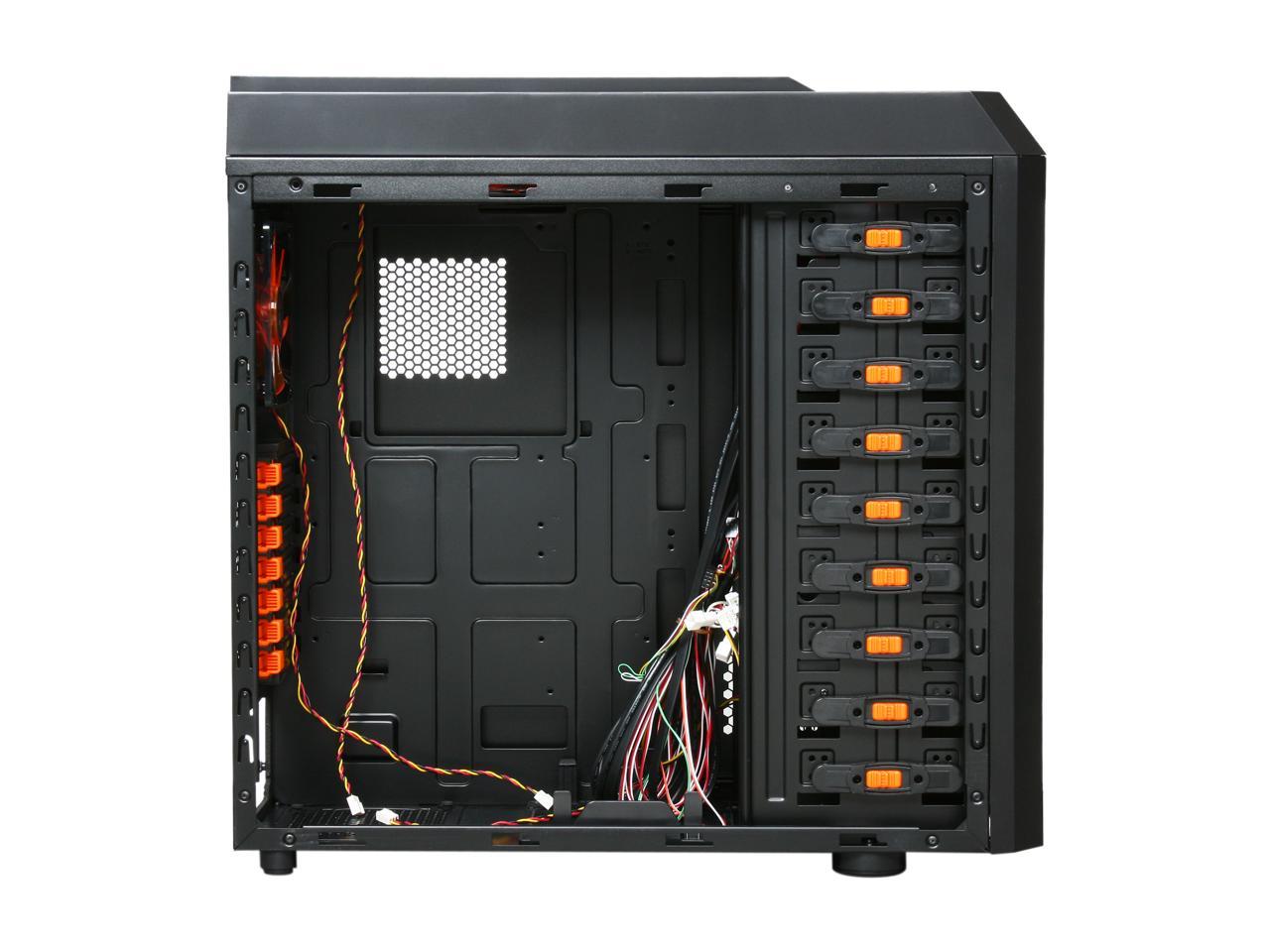 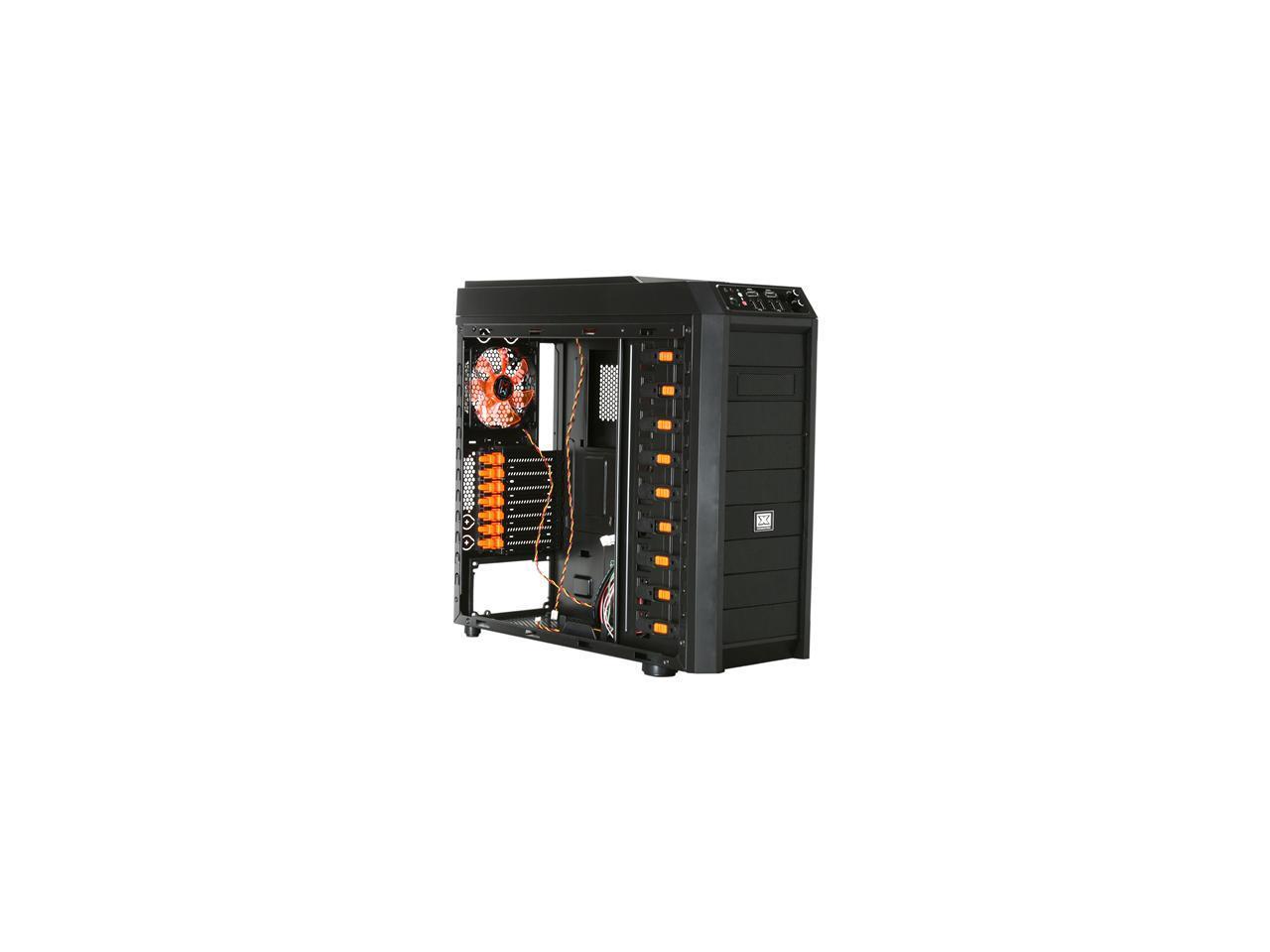 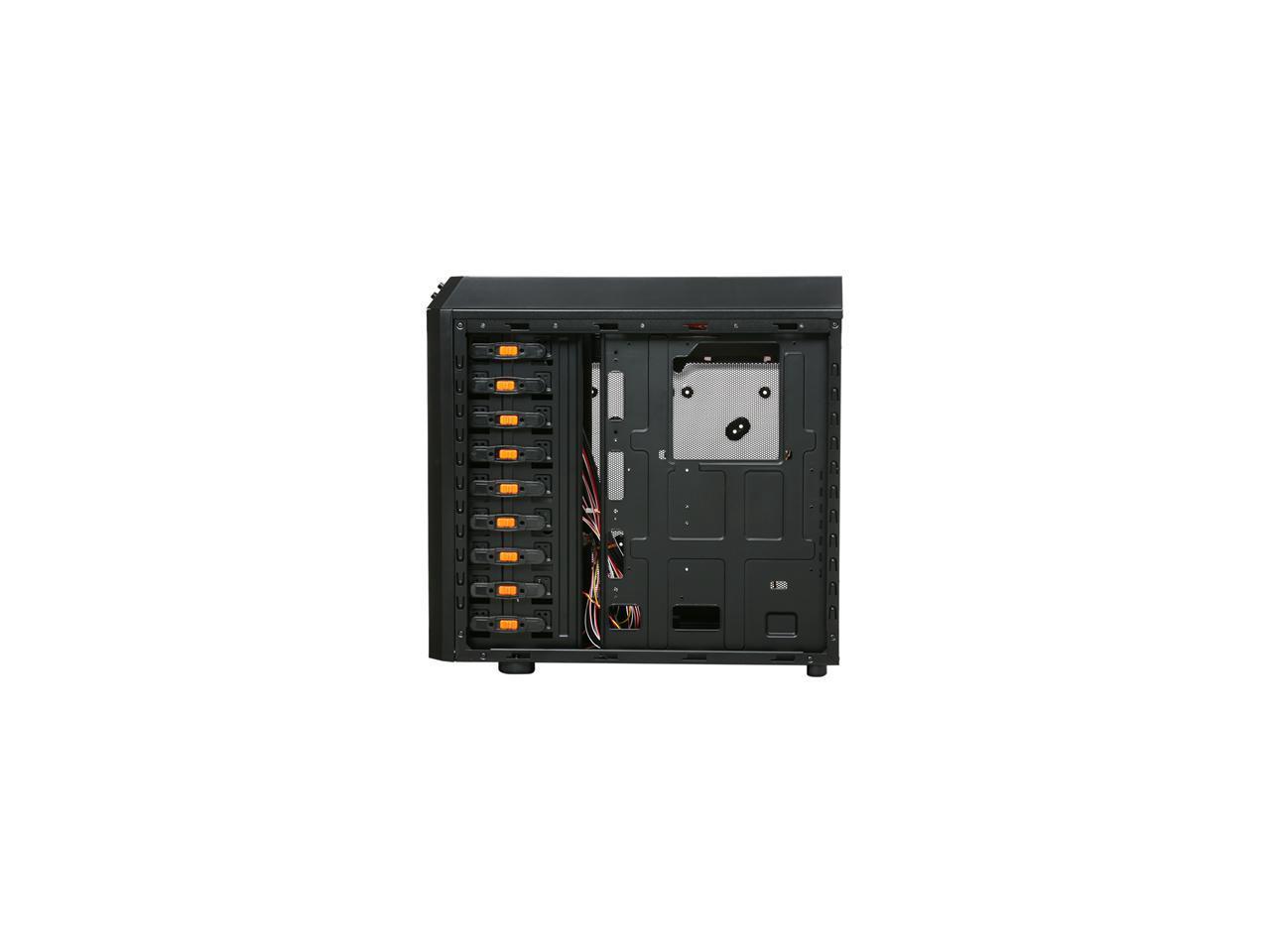 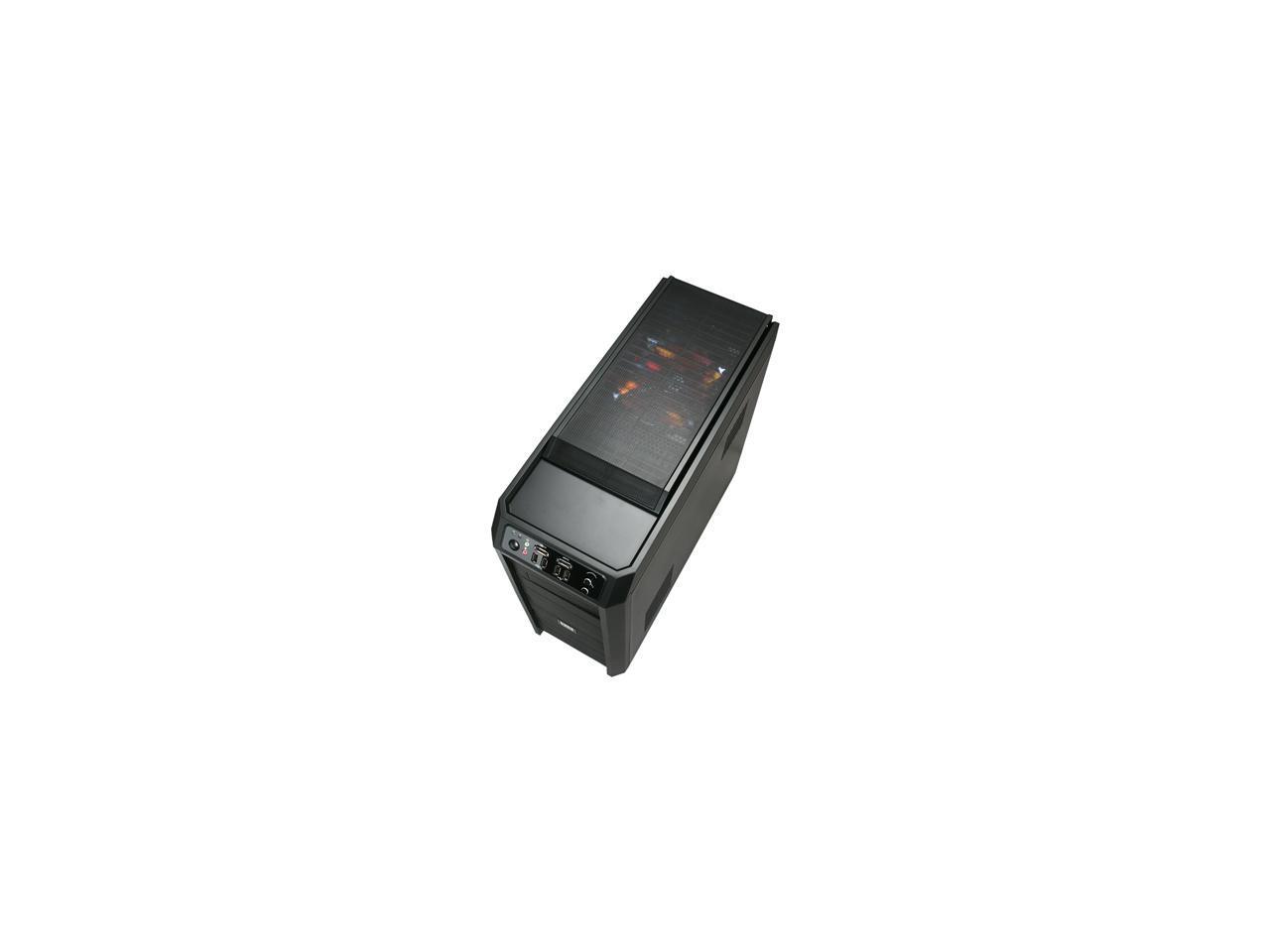 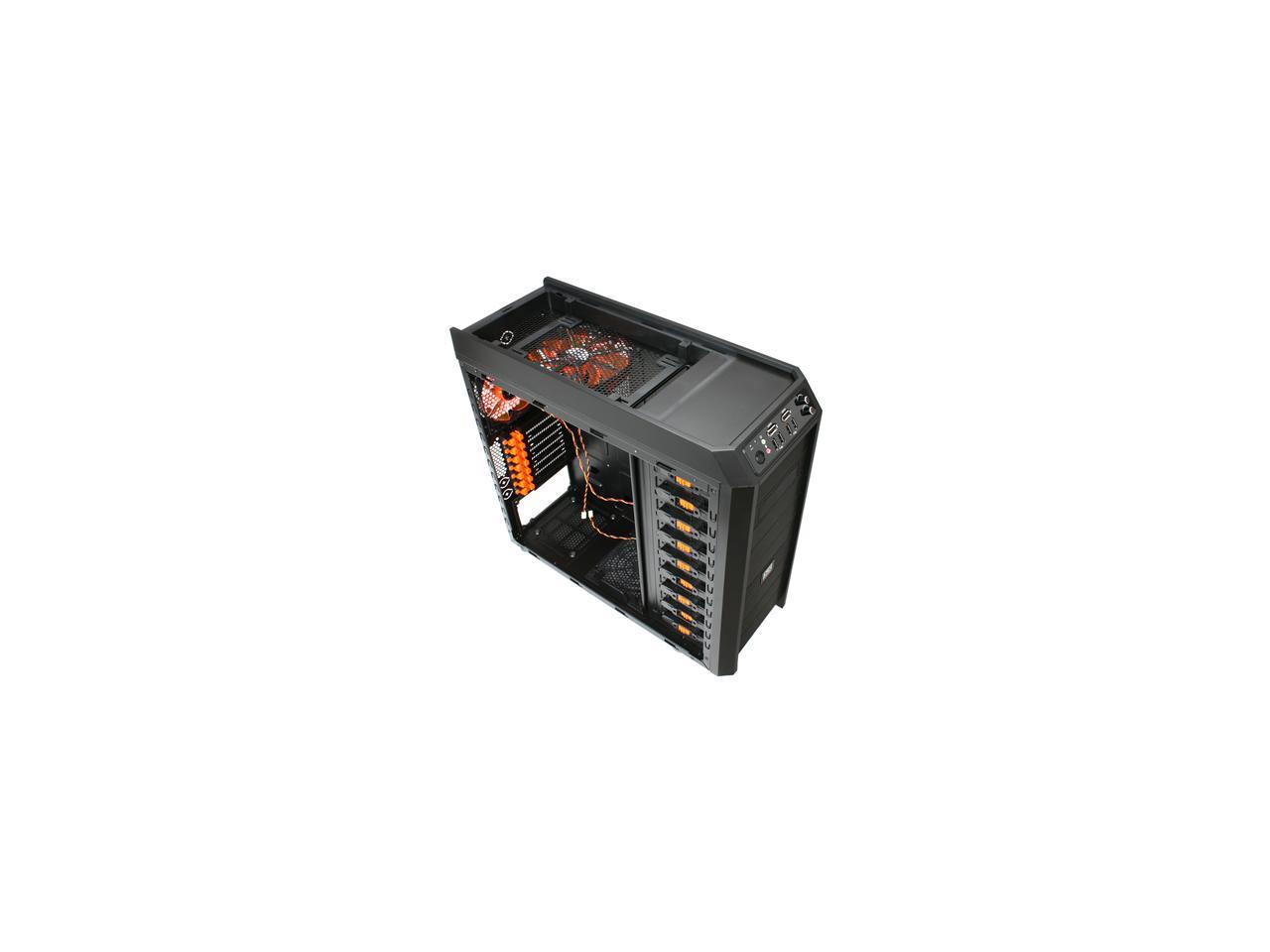 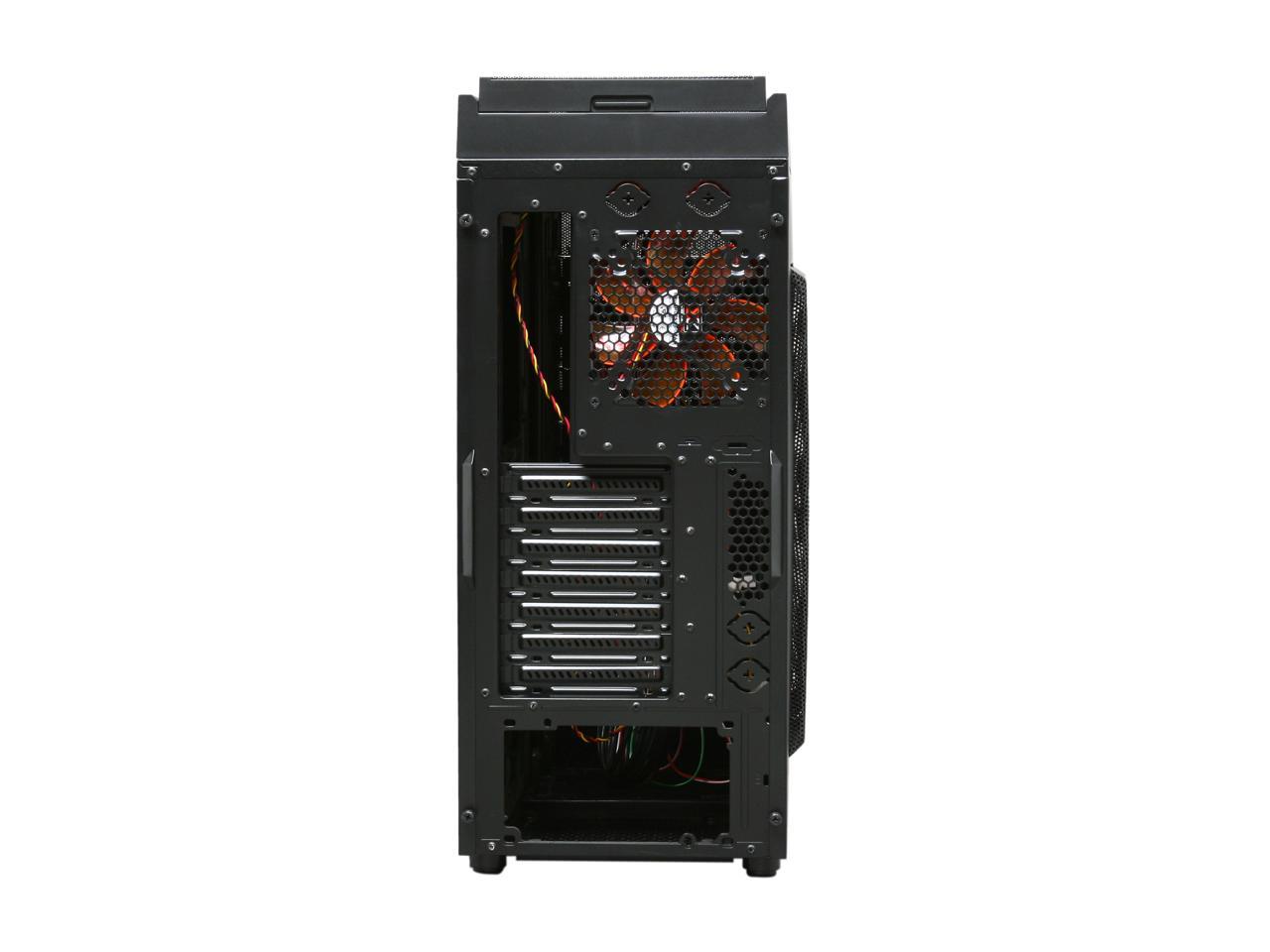 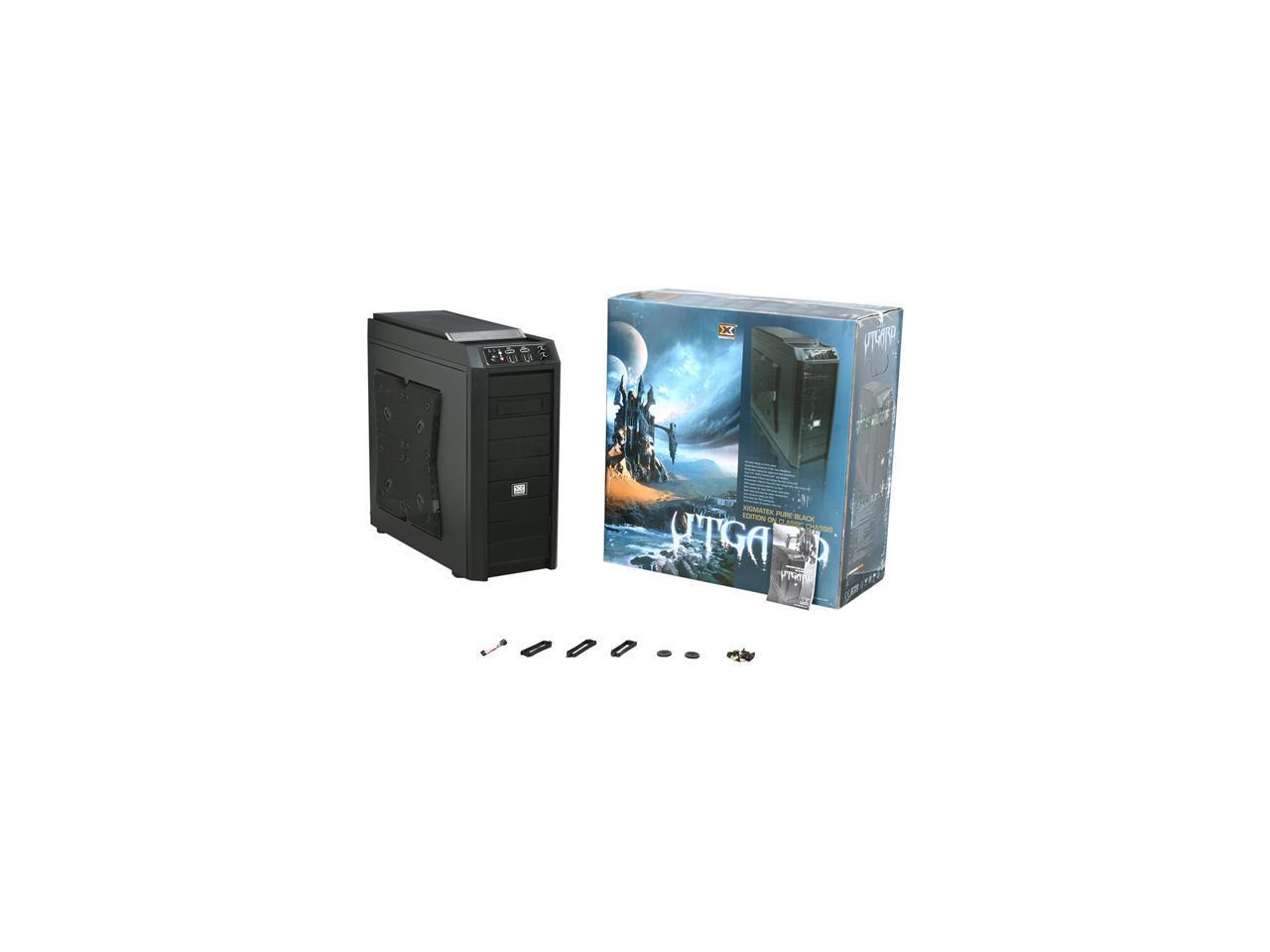 (25) Write a Review
OUT OF STOCK.
Overview
Specs
Reviews
UTGARD - THE ONE AND ONLY GIANT "UTGARD" - Beyond the world of mankind and Gods, home of Giants and Trolls. DOMINATED by LOKI, the God of Giants. This chassis is supplied with 2 x 120mm pre-installed fans on the front and the rear, one top fan with the size of 170 mm, but another 6 fans can be mounted in different areas for best possible airflow. 9 x 5.25" bays will be able to house all your optical drives, an external 3.5" device adapter and a 3 to 4 HDD Device.

Overall Review: When You Buy A Case With Integrated Fan Controllers It Should Have Enough Watts To Handle Whatever Fans You Connect To The 6 Connectors!Don't Buy This Case Unless You Connect Only Xigmatek Fans Or A Low Power Equivalent.

Pros: Trident obviously didn't do his research, and belittling a product because of his own ignorance is crazy. A word to the wise.. put in and set the hard drive before you install the motherboard, that was really the only hassle that i had with this case.. you CAN take the hard drive holder out the front of the case though its a little difficult to move back and forth.. Some people complained about the screws not being long enough? Idk i had PLENTY of long screws that came with the case.. enough to set the motherboard and install 2 hard drives.. So i have no idea why they didn't have screws.. I did add the 200mm fan but if i could i would probably order the 220 and i also installed another 120 in the front even though i had to use zip ties to attach it because there is no where to add another fan.. but as far as cable management goes there is enough space behind the mobo and drive bays to stuff the wires between them and the back panel.. a little more room wouldn't hurt though.

Cons: The instructions are defiantly lacking but I didn't really need them because i knew what i was doing.. The mesh for the fans is a bit dark and dense makes it harder to see the LED's but they are nice to look at and it keeps alot of the dust out with the dust filters.. for those that cannot do research on the fans.. they are orange with 4 white LED's in the "corners" of the fan where the screws go helps illuminate the orange but not give that overpowering color like the blue, red, and greens are known for.. The I/O panel around the fan speed controllers gets really hot, but the rest of the case is ICE COLD with all the fans i have installed and the fans don't really make much of a sound unless i have all 5 of them cranked up to 100% which isn't often.

Overall Review: The cons are really really nit picky.. I love the case and I'm glad i went with it.. This case may not be the best if its your first build and you don't really know what to do.. but other than that I would recommend it to anyone.. I like it alot better than my wifes and she has the Armor A90..

Pros: Solid, ventilated metal frame with air filters. Plenty of fans. This could have been a five-star product.

Cons: The power switch and fan controls are the most obvious problem. The controls are noticeably loose, and I expect they'll be the first component to break. The build quality is only slightly less terrible than the plastic hinges and doors HP uses on their current "media center" PCs. Minus a star just for that. My case wasn't packaged with any HDD mounting screws; especially annoying because the HDD bay on this case has rubberized grips, which require extra-long screws. (They're very good grips, however, and I expect they noticeably reduce HDD vibration.) My case had a small plastic part broken off inside of it when I unboxed it. It was a small hollow cylinder, about 3mm x 1cm, like you might screw something into. It was rough on one side, and had obviously broken off of something; I assumed it was part of the front bezel or a fan, but I haven't found any broken parts their. I can only hope this piece was broken off someone else's case, and a lazy factory worker packaged it up in mi

Overall Review: This case might have gotten five eggs, except for the low quality front panel switches. It rightfully should have lost another egg for the low quality packaging, with missing screws and distressing broken plastic bits. Also, I noticed the manufacturer has produced several YouTube videos advertising this case. It would have been nice if they also made a video demonstrating how to disassemble the case and install components, because the included documentation is utter garbage. I also don't see the point of having front-mounted manual fan controls. If I'm going to have manual fan controls (which I'm not sure I want in the first place), I'd rather they be in the back, since I won't need to change them often and I don't want to be bumping them accidentally. Nitpicking aside, this is a quality case - but next time I buy one, I'll look for one with better front panel switches.

Pros: As others here have said the case has a lot of room inside, comes with 3 fans (2 –120’s and 1 – 170), painted interior, M/B cutout, rubber feet, bottom mounted PS with dust filter, water cooling capabilities, good cable management and all for a price that other company’s would have charged much, much more!

Cons: Yes like other the fan controller quality is lacking and is prone to failure or overheating and like others have said the drive cage design is lacking…having to pull it out of the front to get at the drives is dumb…and like other have said you have to purchase your own screws in order secure your drives (so it have cost Xigmatek another $1.00 to do so…what gives?). Also why is no reboot switch provided? Has no one Xigmatek ever gotten their computer locked up under windows OS…come on! Another minor point is that Xigmatek claims hat 140mm fans can be mounted on under the front bezel…that’s not so only 120mm…and of all things they did not provide mounting holes on the first drive bay forcing you to mount any fans lower on the case…it would have been nice to mount a fan pointed at the CPU…these are minor items…in all the case is one of the best even with these minor flaws…

Overall Review: I see Xigmatek is coming out with its new Elysium case soon and it’s reported to be one of the best water-cooling cases with 12 optical drive bays for under $200. Don’t have that much cash but want a rad case? Here’s what I did…buy 2 of Utgards ($120)…1 window and 1 mesh…on the window case discard the left side panel…on the mesh case do the same but replace it with the mesh side panel from the right side…yes you can do that with these cases! Now buy a piece of acrylic and cut out the center…then mount the 2 cases together…purchase a set (4) small wheels from you local hardware store and install on the bottom…on the modified mesh case drill out the 5 or 6 pop-rivets holding that cases MB in (you don’t need 2 MB’s do you?). And in that space you can add more optical drives or just cove the hole with acrylic…now you have a case with 18 optical drive bays…2 bottom mounted PS locations and now have 14 120mm fan locations or 2 170mm fans and 10 120 mm fan locations or…you get the idea…and

Pros: Nice paint and the interior seems well thought out and has massive air flow.. but that is just from putting in the basics to see how well it would work because the box looked like it was tied to the back of the UPS truck and dragged down the street.. to my surprise *sarcasm* the front panel was shattered in about 20-30 pieces.. It is kind of a thin plastic but the box was smashed and ripped up pretty bad, UPS needs to do better than this..

Cons: I'll let you know when i get the Rma

Pros: Roomy with great air flow properties. Plenty of drive bay options. Tool less design that actually works very well compared to other cases I have tried. Bigger yet weighs less than what I would have expected it to. The supplied stock fans do a good job of cooling and are fairly quiet, even though I don't care for the LED lights in them they do make for a great night light. The mesh side panel is a great plus as I don't have to remove the side panel like I do on all my other computers to get better cooling in my environment. I would definitely purchase this case again.

Cons: Not really a con so much as a pet peeve on mine is the location and configuration of the front ports and fan controls. I would prefer to have them in a drive bay adapter allowing me to place them anywhere on the face of the case or be able to leave them out altogether if I like. Most of the ports aren't useful to me or I don't have the resources on the MB or add on cards to be able to use them anyway. Making this part of the case more adaptive would be a great plus to an fine case.

Overall Review: I hate UPS. I have to use them both personally and professionally and at least 50% of all my shipments arrive with some sort of damage. This case was no exception. The packaging was slightly damaged and the case had some broken plastic parts and it was dented at the rear. I was able to repair the dent well enough to get the side cover closed. The rest of the damage I can live with.

Pros: -Case is large for a mid tower. It's walking the fine line between mid and full. -Looks like it will vent quite well with the amount of mesh on it -More than enough bays to add drives to. -The MB tray has a huge hole to add after market Heat sinks after the board is mounted. -Hidden cage on the top for mounting a radiator for liquid cooling as well as a nice space for running tubes up. - Case seems well constructed

Cons: -The front ports look very cheap and seems like an after thought add on to the case. Fairly certain this will need to be replaced soon -1 egg. One of my fans came broken as well as my front mesh was all knocked loose -1 egg.

Overall Review: The fans I'm not too concerned about because I'm swapping for purple anyway. But the packaging from the company really needs to be beefed up. I don't blame Newegg for shipping issues. The mesh I can repair and won't RMA over it. My big Concern is the front ports. I WILL be swaping those for an aftermarket assembly before too long. The knobs for fan control have a bunch of play in them. The ports wobble a bit. This case is an ok platform for those who want space but are not afraid to work for it. Bottom line is next build I wouldn't consider this case

Pros: Love this case, still finding out cool things about this product.

Cons: none. I need a modular power supply now to go with the goodness of this case.