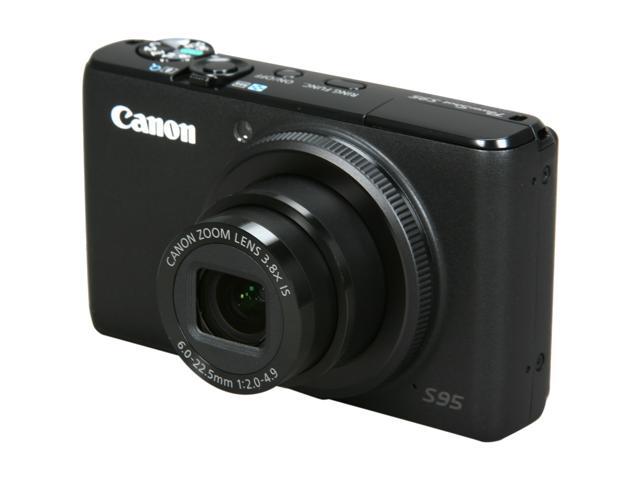 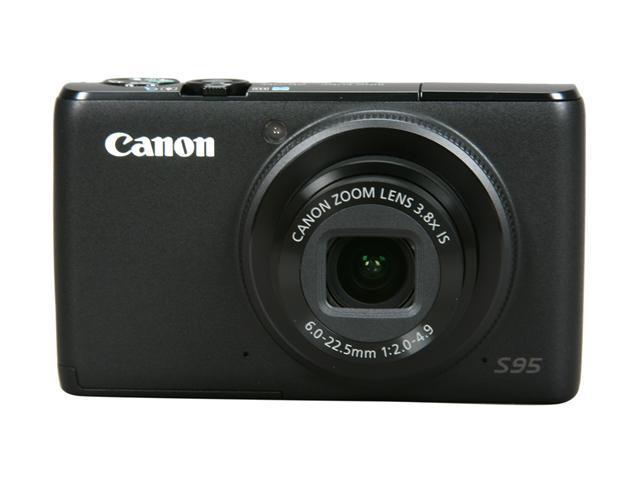 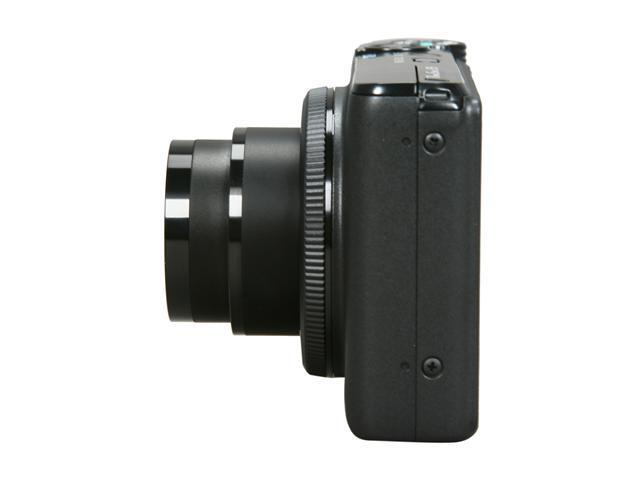 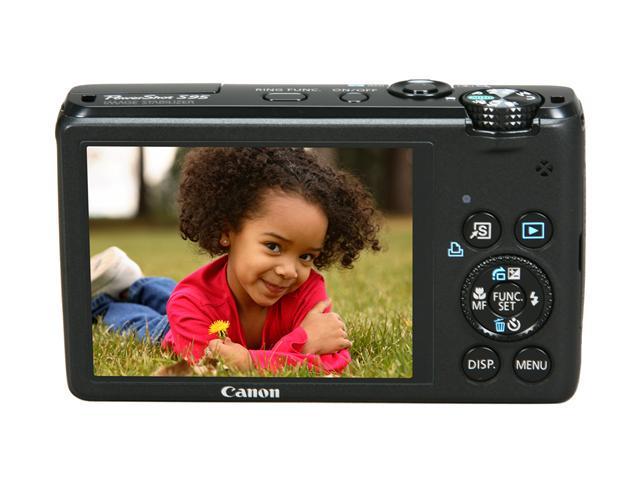 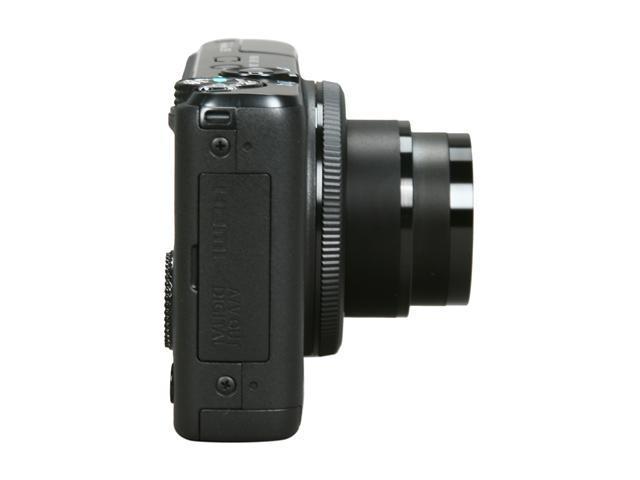 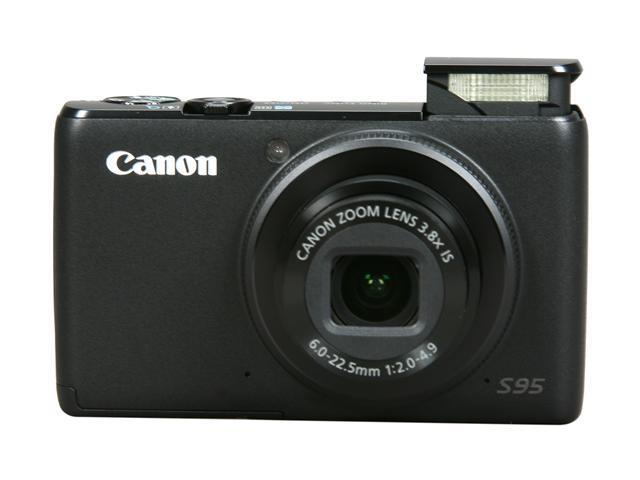 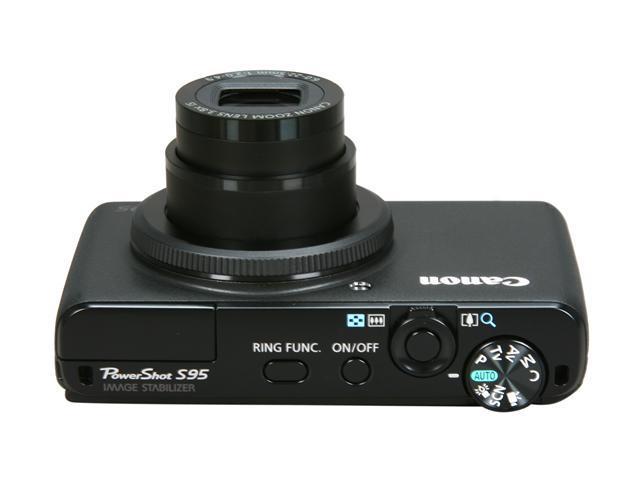 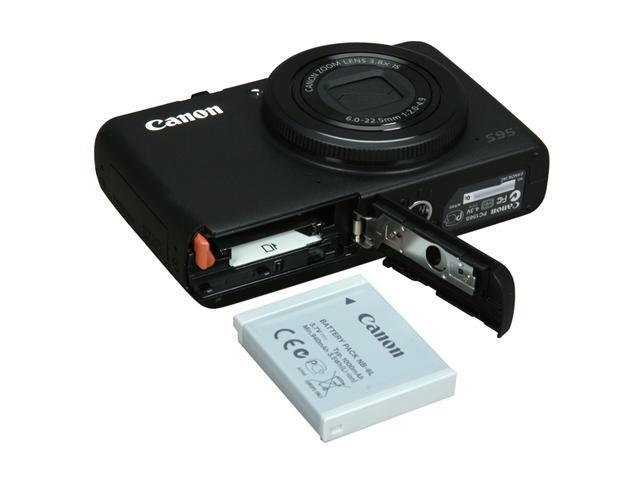 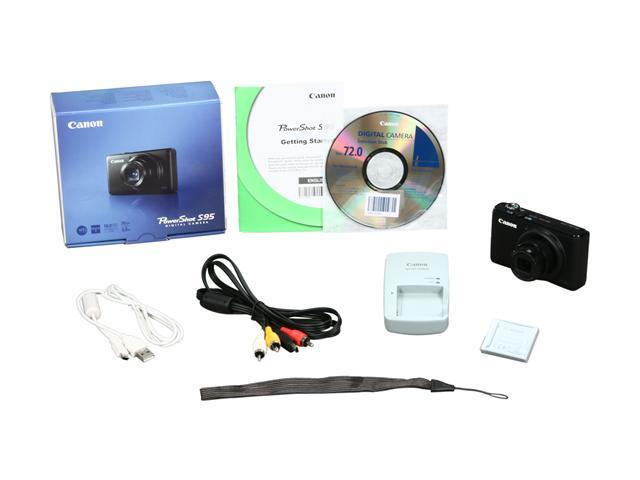 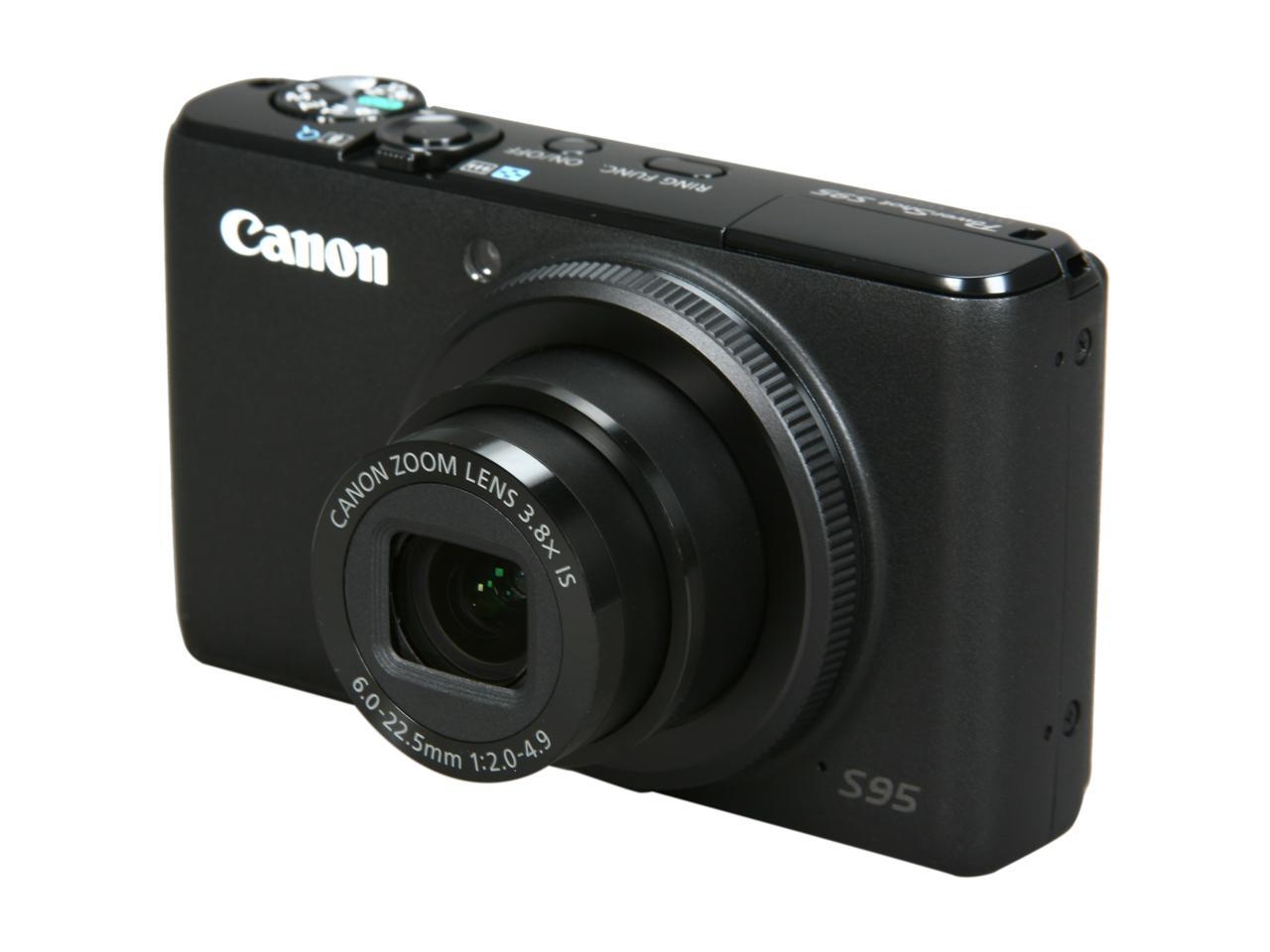 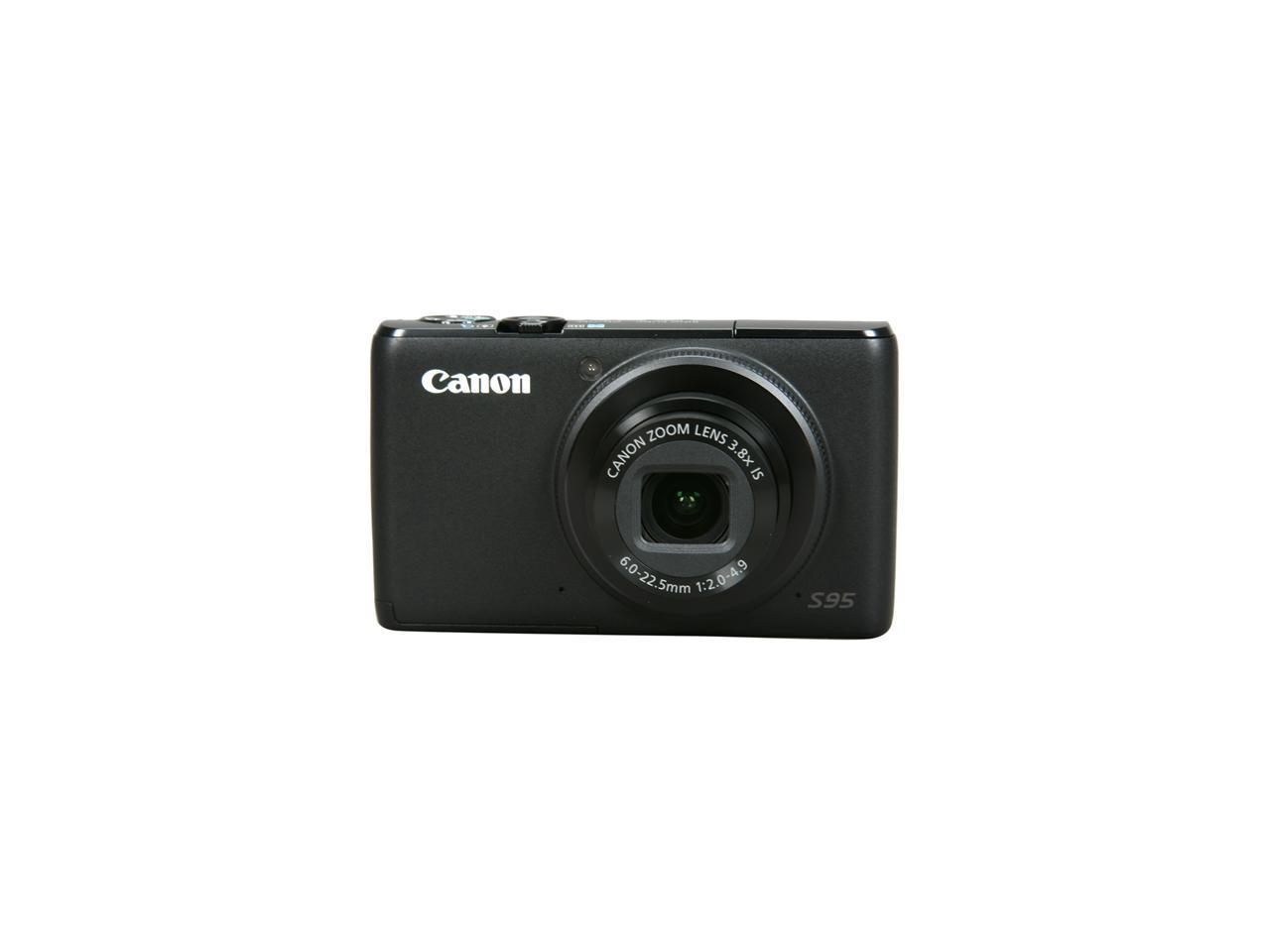 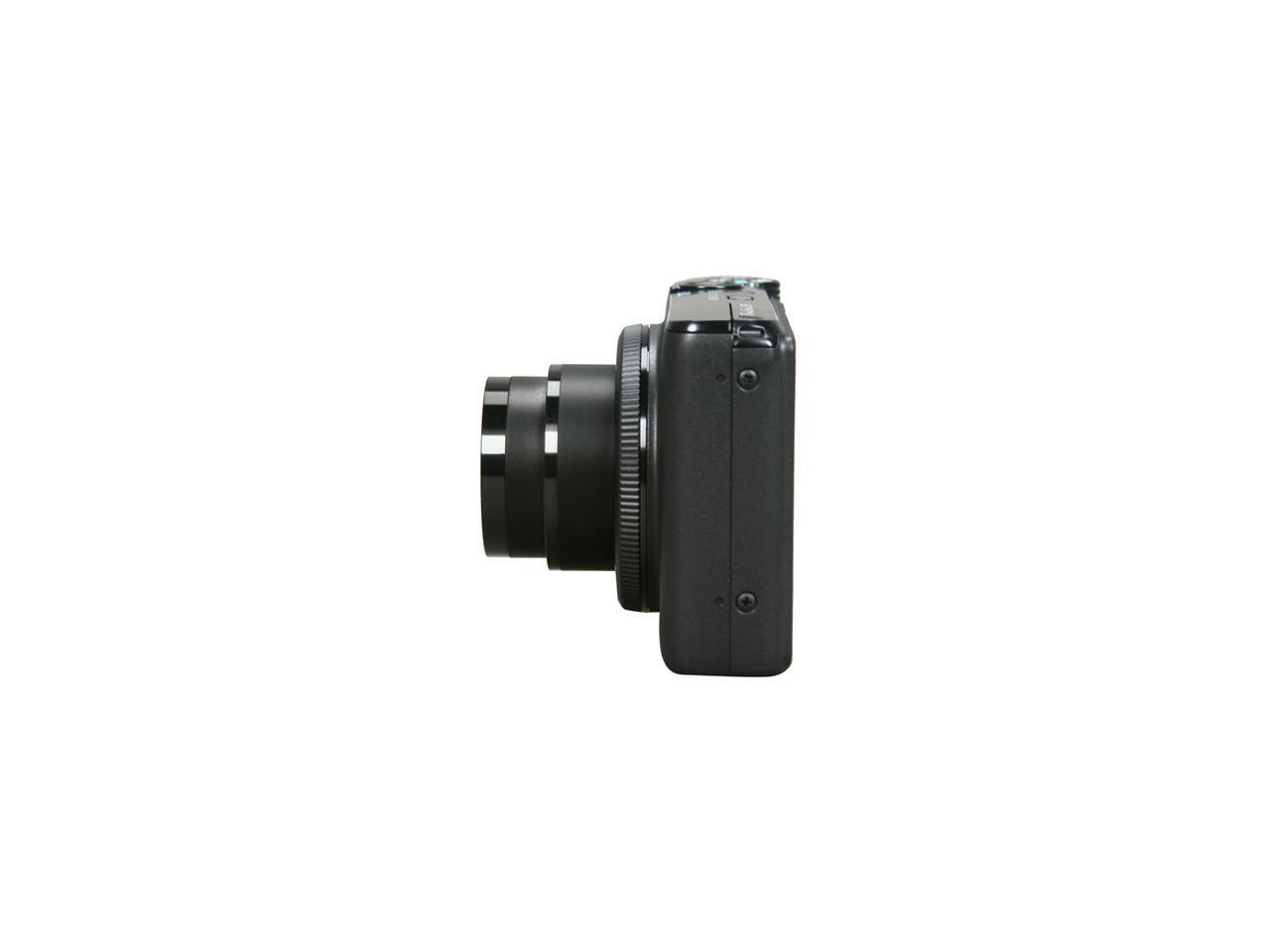 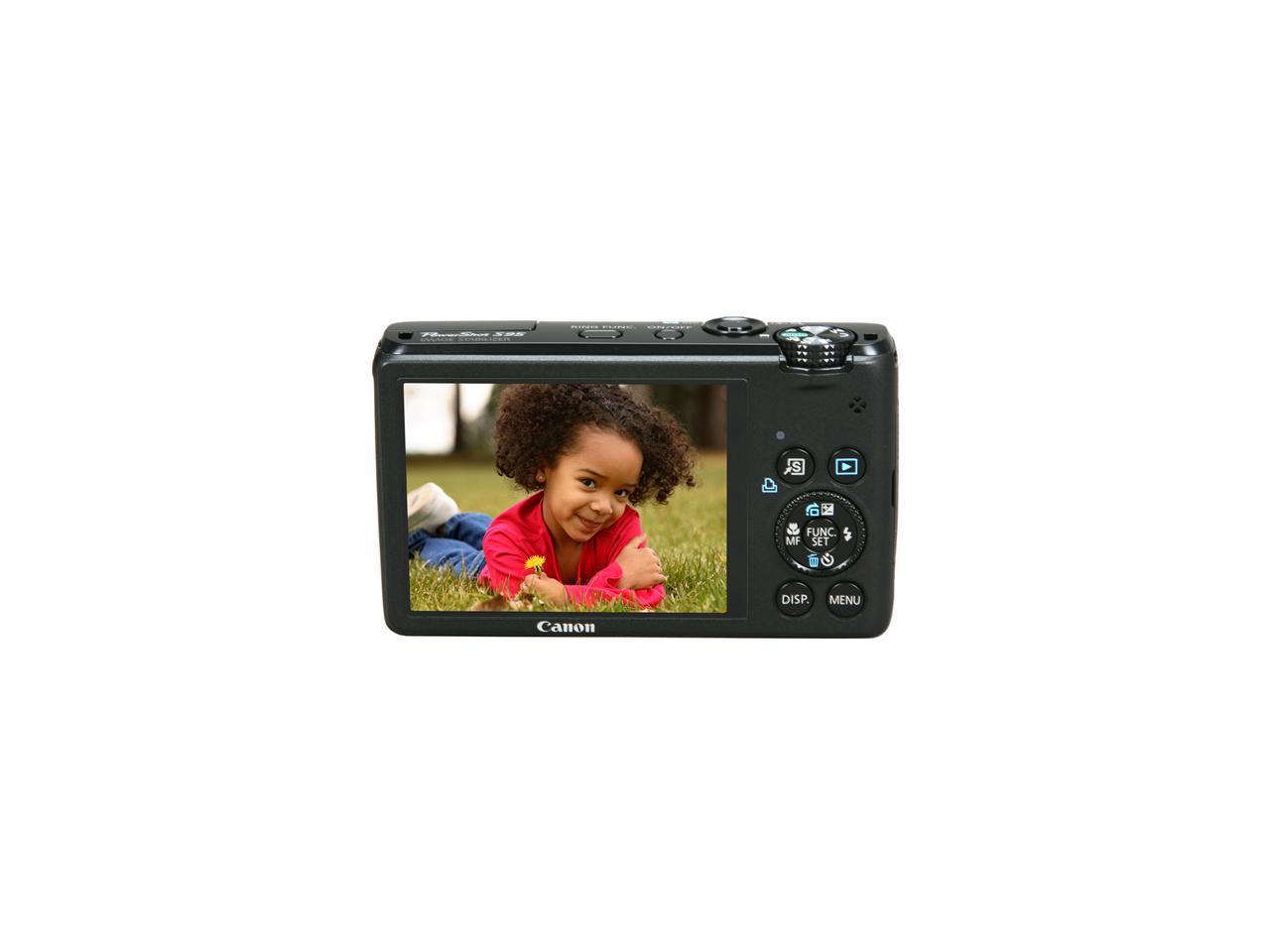 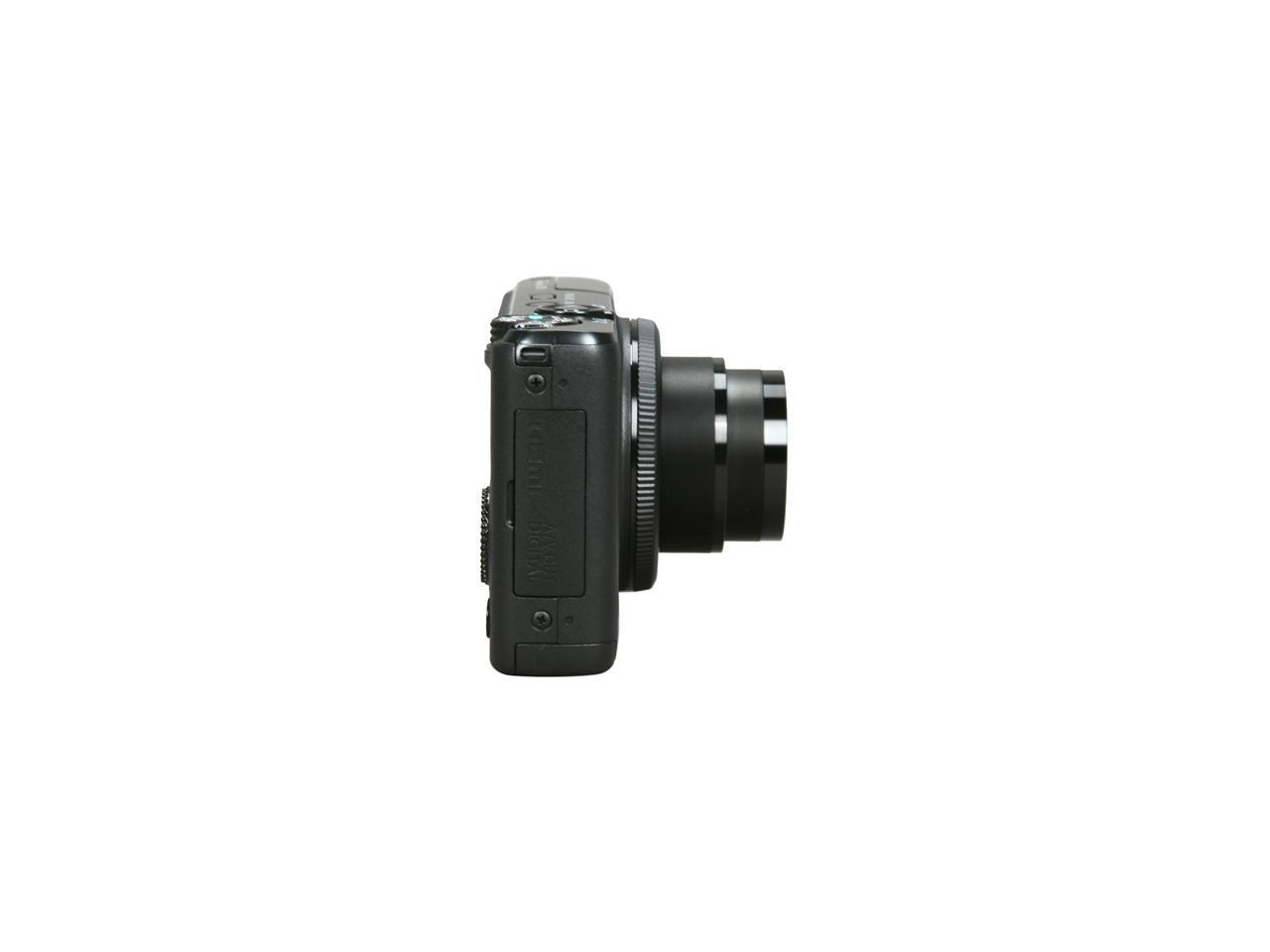 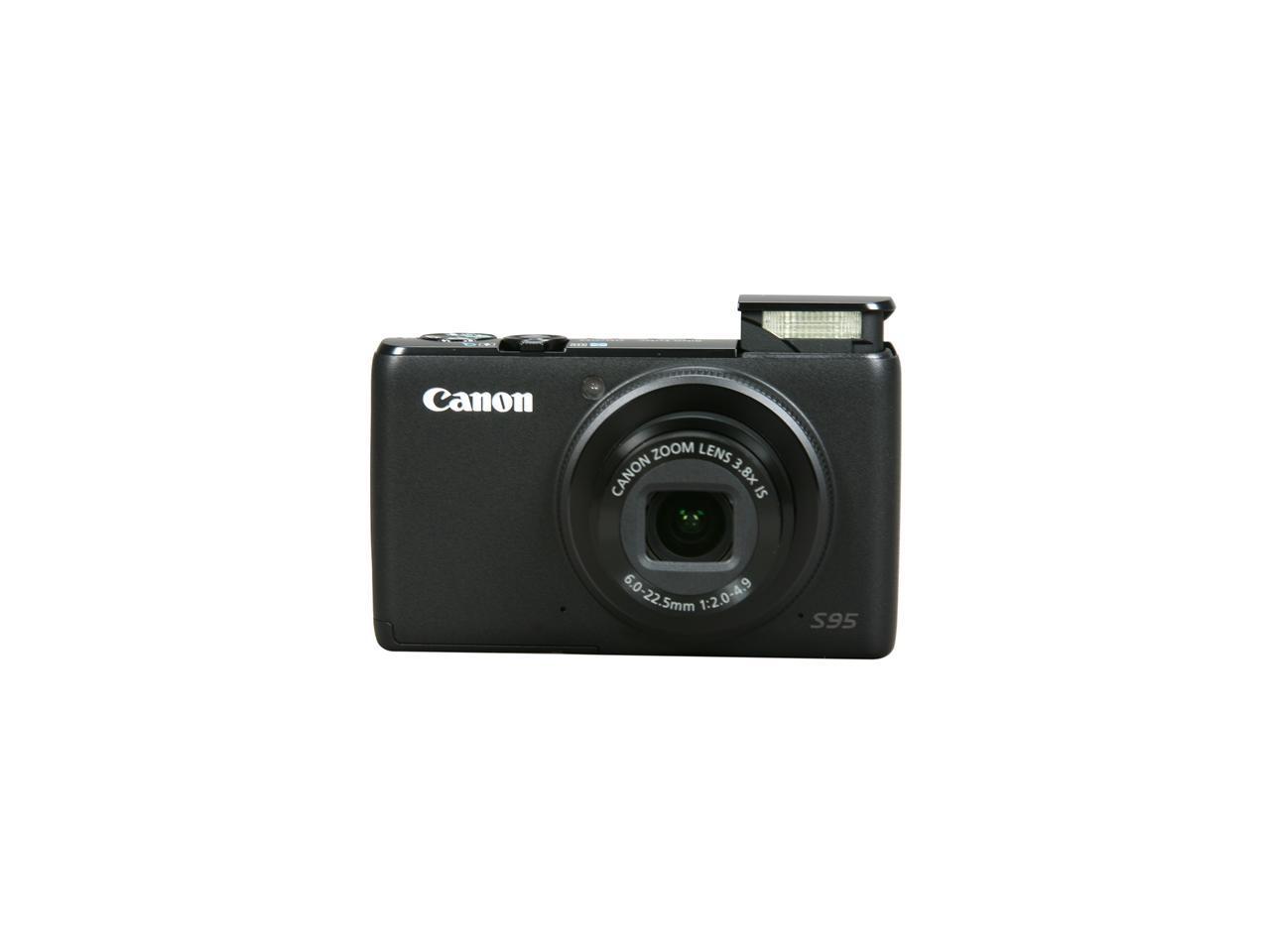 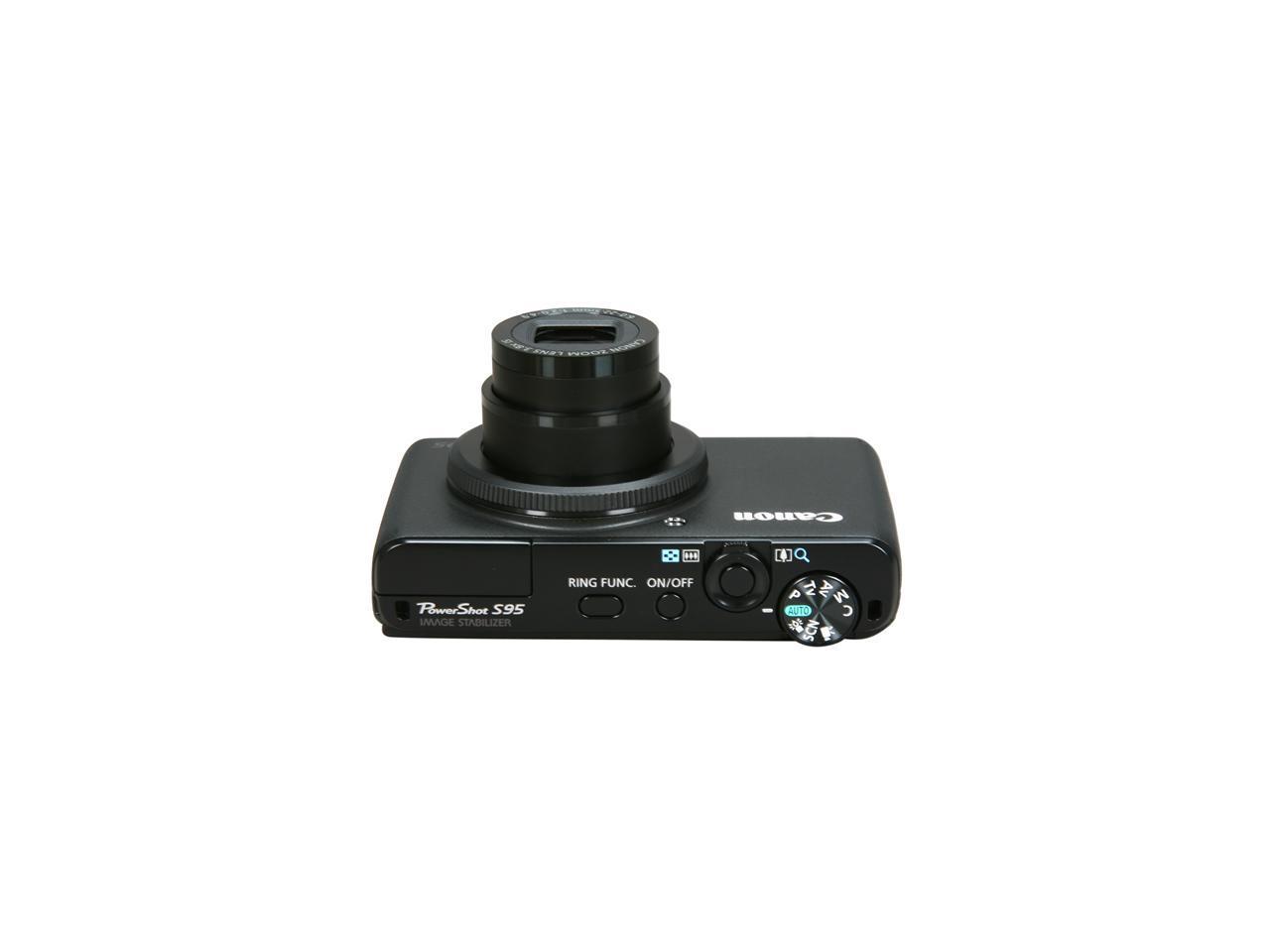 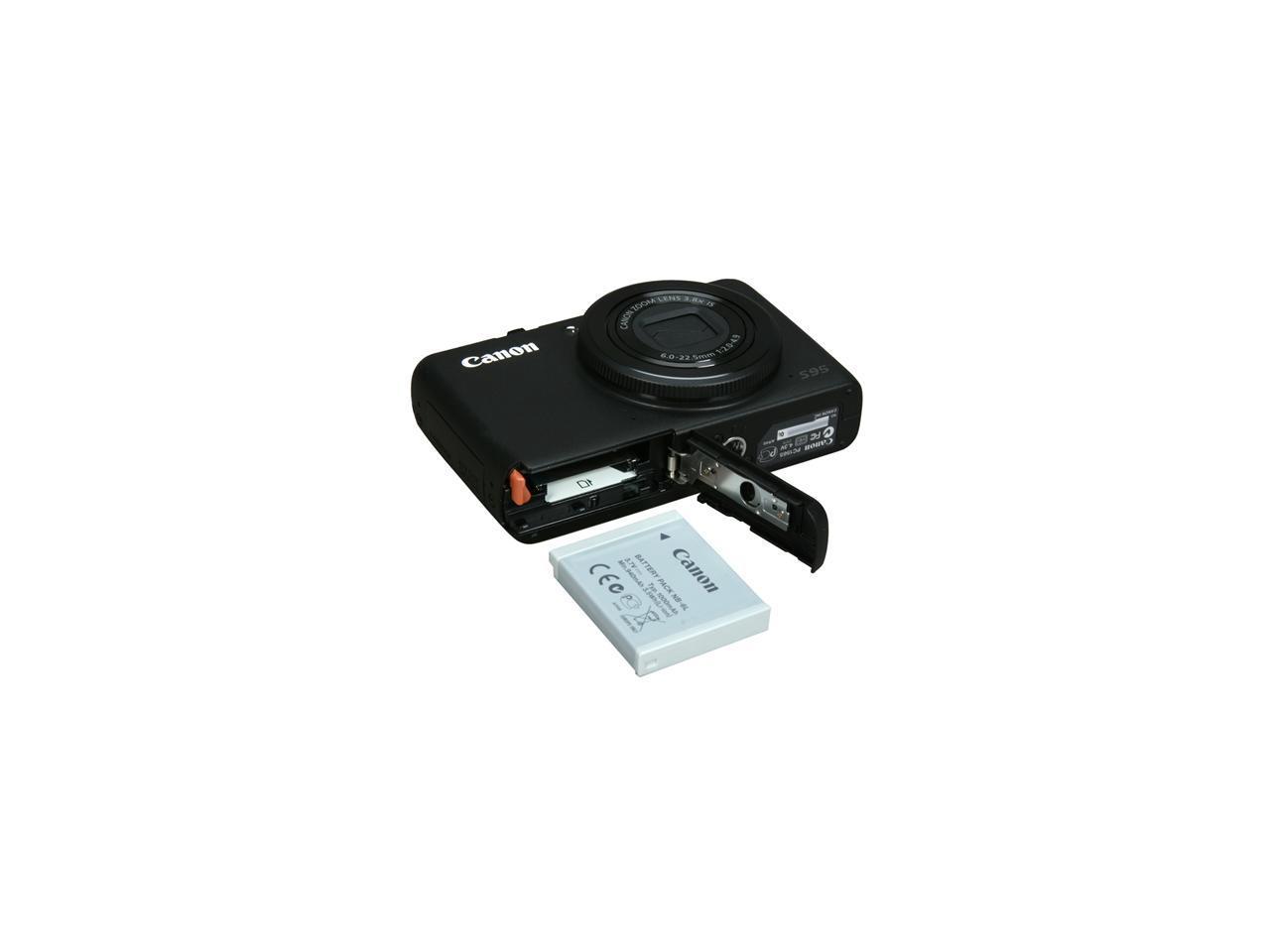 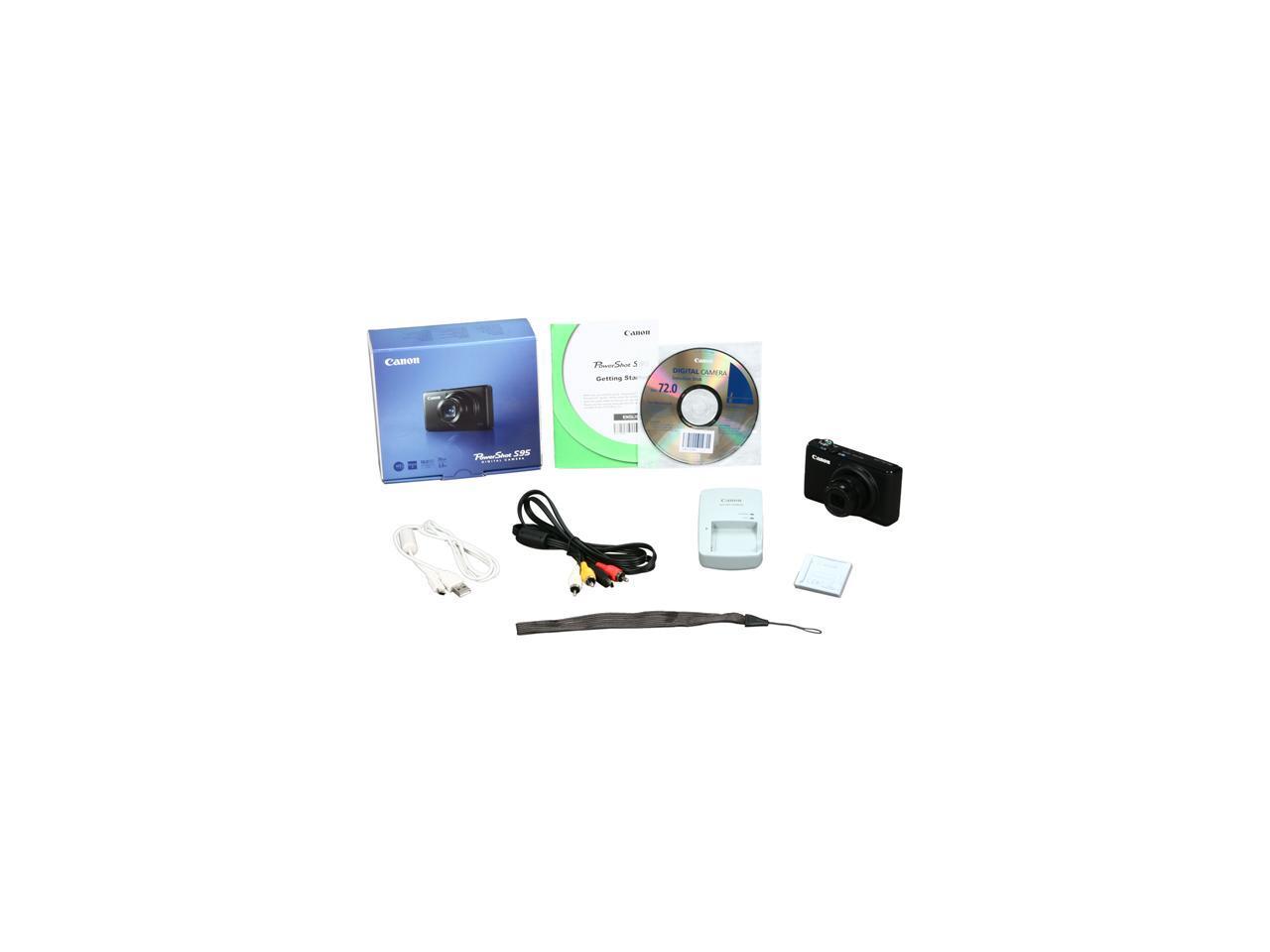 (39) Write a Review
OUT OF STOCK.
Overview
Specs
Reviews
Canon introduces the top-of-the-line digital camera PowerShot S95 as an upgrade to the S90. The ultra-slim, ultra-intelligent S95 is loaded with all a serious photographer's must-haves, including a bright f/2.0 Wide-Angle Lens, RAW shooting, a number of shooting modes and effects for ultimate creativity, and professional-style control ring for intuitive manual control. On-board Canon’s HS System, a combination of a high-sensitivity 10.0 Megapixel CCD sensor and powerful DIGIC 4 processor, provides exceptional low light performance. The new S95 is also upgraded with Canon's Hybrid IS for blur-free shooting even close-up, and capability of 720p HD video recording with stereo sound. Performance, flexibility and portability merged, now it’s time to step up to PowerShot S95.

Learn more about the Canon S95

Overall Review: After purchasing the canon sd940 and returning it due to lousy photo quality, we purchased the panasonic luminix zs6. Although the image quality was much better, it still suffered from issues in low light. We also had a tough time getting use to the bulkiness of the camera as well as the interface. Enter s95. Got it last night, charged the battery and started taking indoor shots at night under low light without flash. In my opinion, this is the real test for any compact. After taking a few pics of the wifey and baby and dog i was impressed by how they looked on the back of the camera but figured that once i plugged them into the computer, i would see all the noise that i had started to believe was normal for any compact... I was wrong, the s95 took absolutely beautiful pictures under these conditions. I'd consider myself a little picky, ok very picky, with technology and Seriously... i was blown away. The quality of the lens in the s95 is so worth the price if you want a compact.

Pros: I've had the Canon s80 since 2005 and had come close to buying the s90. Just as I was about to purchase the s90, the s95 came out. Wow. What a fantastic little camera. In manual mode, I can control shutter speed with the ring dial around the lens, aperture with the spin wheel on the back of the camera, and ISO with the "Special" button, i.e., the programmable "S" button on the back. If you're in the market for pocket-able point and shoot and you know a thing or two about photography, then get this camera. A positive note for Newegg - I purchased the camera on a Tuesday afternoon and had it on Thursday morning!

Pros: This is my third Canon point and shoot (I also own the first generation Rebel Digital SLR). Purchased the S95 right before going to Europe and I didn't get a chance to test it before leaving. What a pleasant surprise. this small size camera is awesome! it takes pictures under all light conditions. It is very FAST to lock the AF and also to shoot. I took some great spontaneous shots and the camera responded superbly. The quality of the photos in different situations, city, countryside, night shots and flash is great. The flash produces almost no red eye (I set it up with red eye reduction ON). We took a mix of people and landscape photos and they were all superb. The AF locks into peoples faces very quickly and it is a great capability when taking group photos. The ring control around the lens is a very nice feature and I am quickly getting used to this. I have not spent anytime reading the ~200 pages manual (downloadable from the Canon web site) yet, but very easy to use.

Overall Review: 1)Easy to use (my spouse who in general doesn't like to take pictures now loves this camera and just took it with her last week on a trip to Argentina) 2)Fast to focus and fast to take the pictures 3)Great light metering system, take great pictures even when there is uneven lighting. 4)Buy the SDHC card Class 10 to take advantage of the speed and also for faster transfer to your PC. During my trip I was transferring the photos to my iPad via the adapter sold by Apple. it was so easy and so fast. We could then look at the photos in larger size on the iPad.

Pros: I bought this camera to replace my Canon SX1 IS. the SX1 IS failed miserably in low light and indoor pictures. It did good with outdoor pictures and 1080P videos. I got tired of all the noise and artifacts at any ISO over 200 so I bought this camera and will never go back. The S95 has excellent low light and high ISO performance as well as perfectly balanced JPEG compression(unlike it's rival Panasonic LX5). It takes sharp pictures without flash and the 720P 24FPS videos are smooth and sharp as long as you don't pan too quickly. I like how in AUTO mode it will adjust to macro mode if you are close to an object. Every tweaking option you could ask for plus some. I will shoot in program mode and just turn down the exposure a notch or two and the pictures come out amazingly rich and focused every time. there is no better point and shoot compact camera out there so buy it now!

Cons: Finally there are no cons in this digital camera.

Pros: This camera is really awesome. Its very small, high res, and has lots of great features. I hardly ever have to recharge the battery. It provides enough manual control to take difficult shots. A great "small" camera for someone who knows a lot about photography. Its also extreamly rugged. I've dropped mine badly several times and its suffered no damage.

Pros: -Great Quality Photos -F2.0 low light photography -Okay noise at iso800 and bearable in iso1600 -control ring x2, one for aperture in AP mode and the other for exposure and it is customizable -miniaturization mode = fun -not bad video -good IS

Cons: -not as much modes and photographic effects available then others -back control ring can accidentally push and mess up exposure (not as big of an issue as S90) -not much change from S90 -not spectacular zoom range

Overall Review: This is a great camera that compliments my DSLR in places where I can't bring a DSLR. It fits in your pocket, but it is thicker then most P&S. The quality of it is great! Much better then any other P&S in the market!

Cons: -no manual controls after video starts, though can do settings before video

Overall Review: own a t2i and sd780is. blows the sd780is and makes me leave the t2i at home more and more often. always read reviews on this but never wanted it until i borrowed one from a friend, and i was sold once i put it in M. sadly she always used auto. do not buy this camera if you plan to use auto mode, or if you plan to use the flash... might as well get something cheaper. this is a good replacement for an entry dslr. i always brought my t2i for times i knew i was going to take great shots (travelling, weddings, outdoor events) and my sd780is for everything else fun. now i can have much higher quality shots without lugging around the t2i. i found the need to have a compact when in travelling to countries where i was threatened to be robbed (that doesn't stop me from travelling though, but sadly stopped me from getting great shots by using the low key sd780is). now i can. also i can get good shots even from random fun bar/club nights with friends, and also be more low key at weddings.

Overall Review: Very happy with this camera. I had an SD870 before this and this one takes much sharper and better photos. The interface is similar but the added rings to control functionality on the lens and around the controls takes a little getting used to.