Sold and shipped by: Gyu-kaku Gyu-kaku 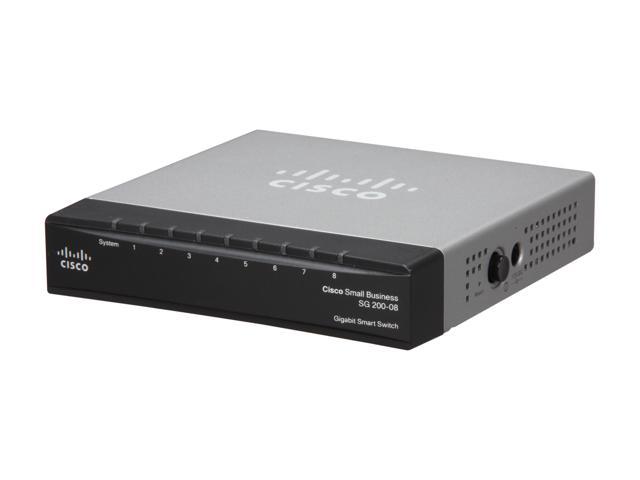 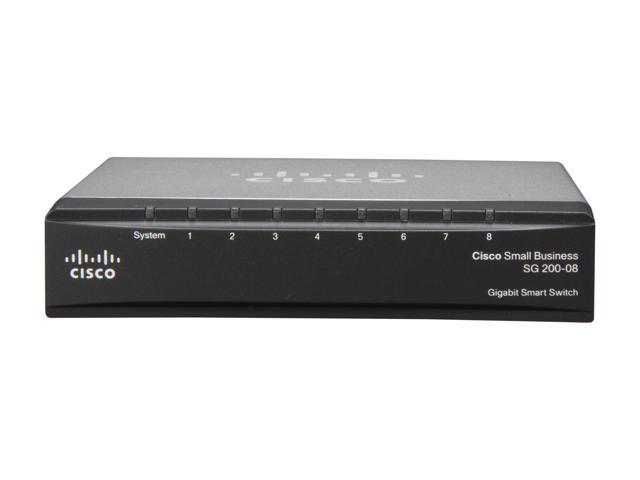 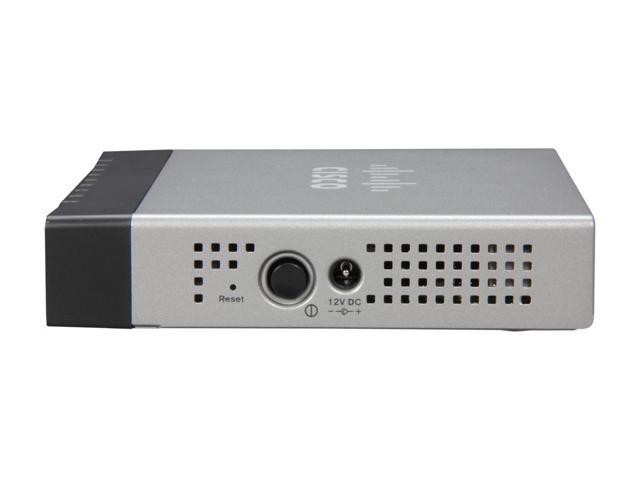 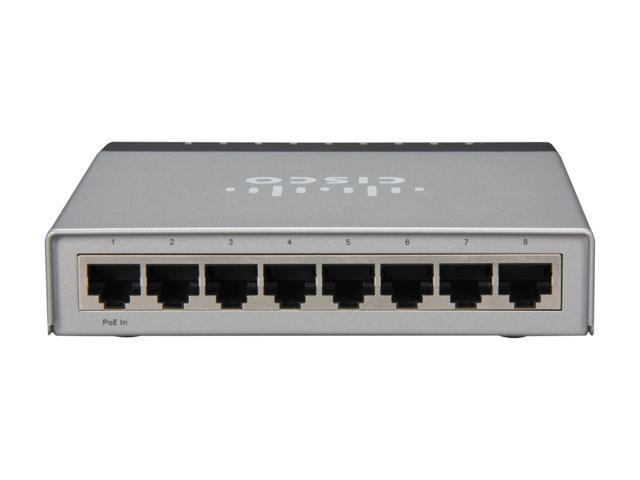 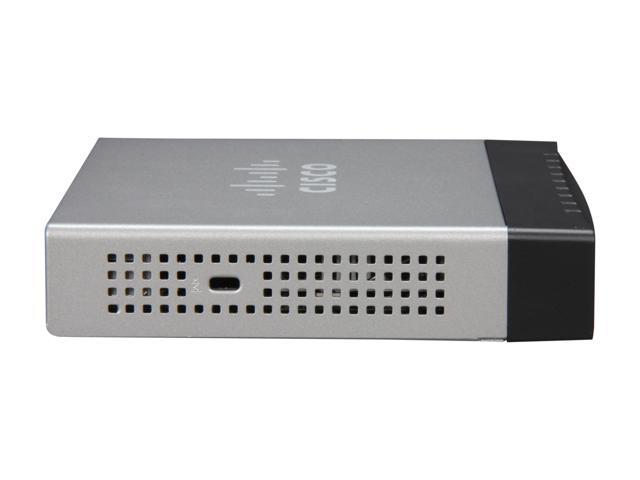 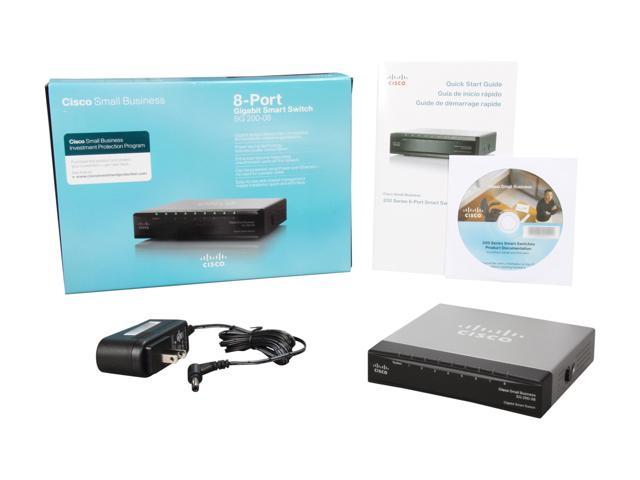 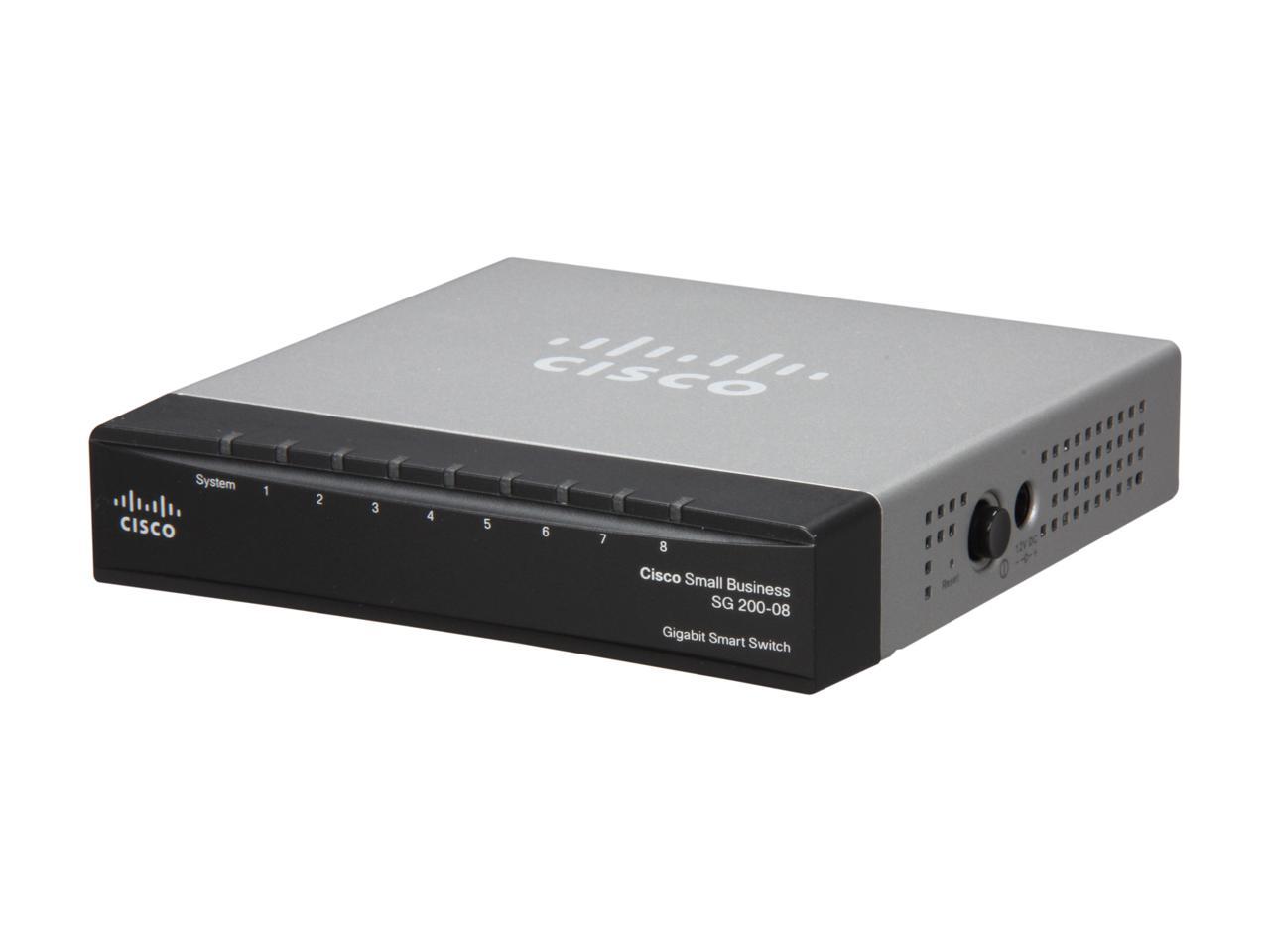 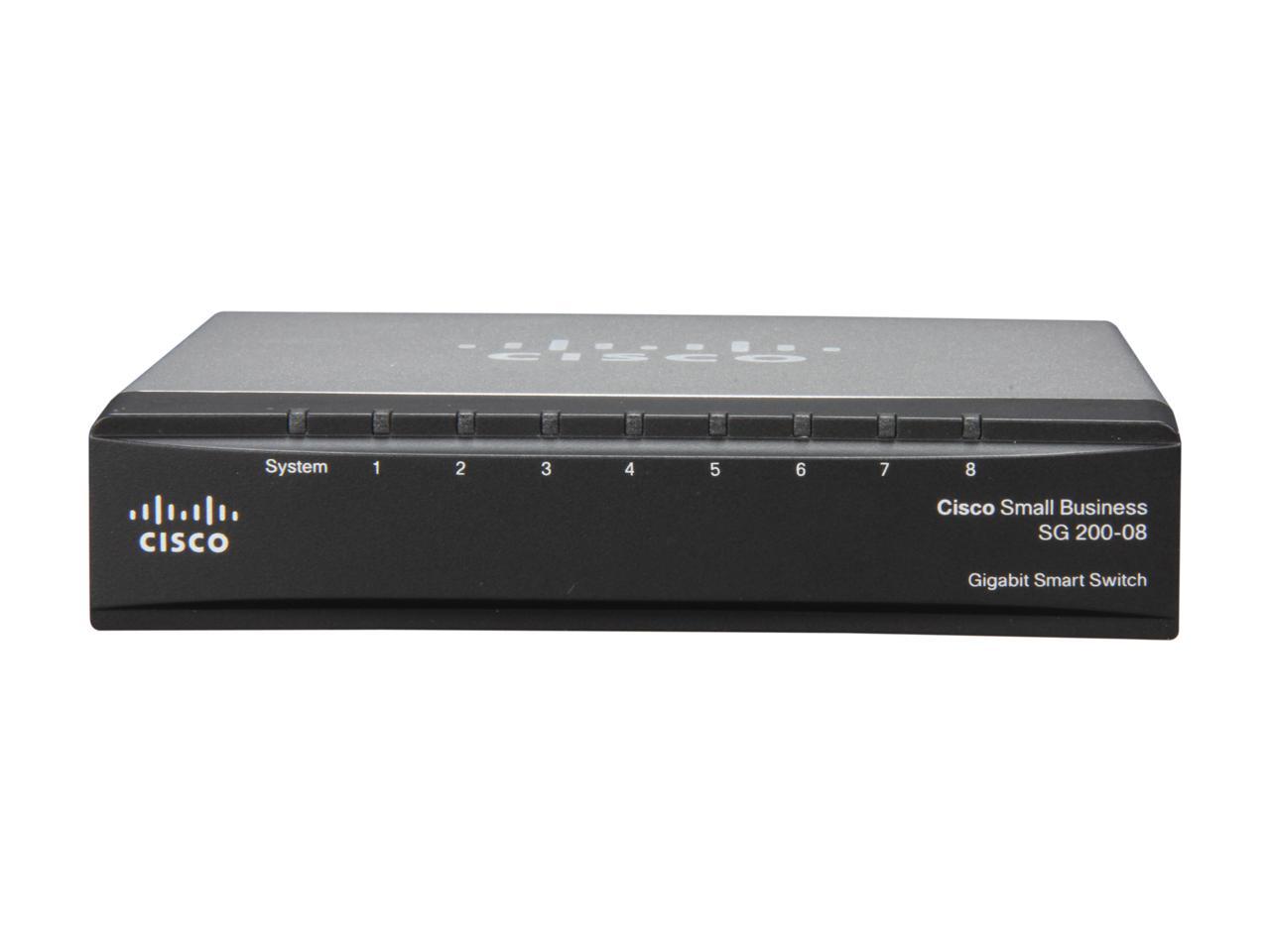 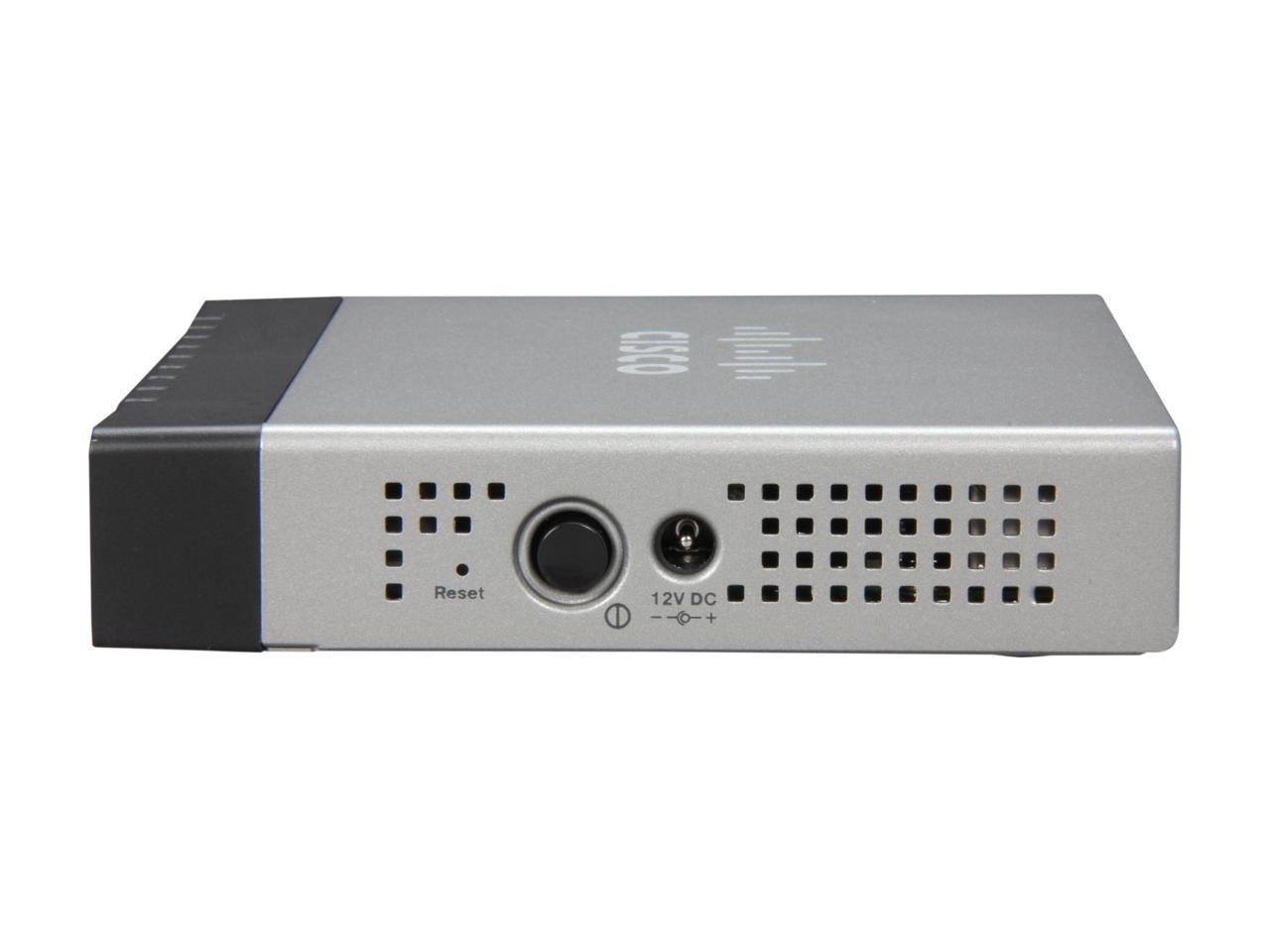 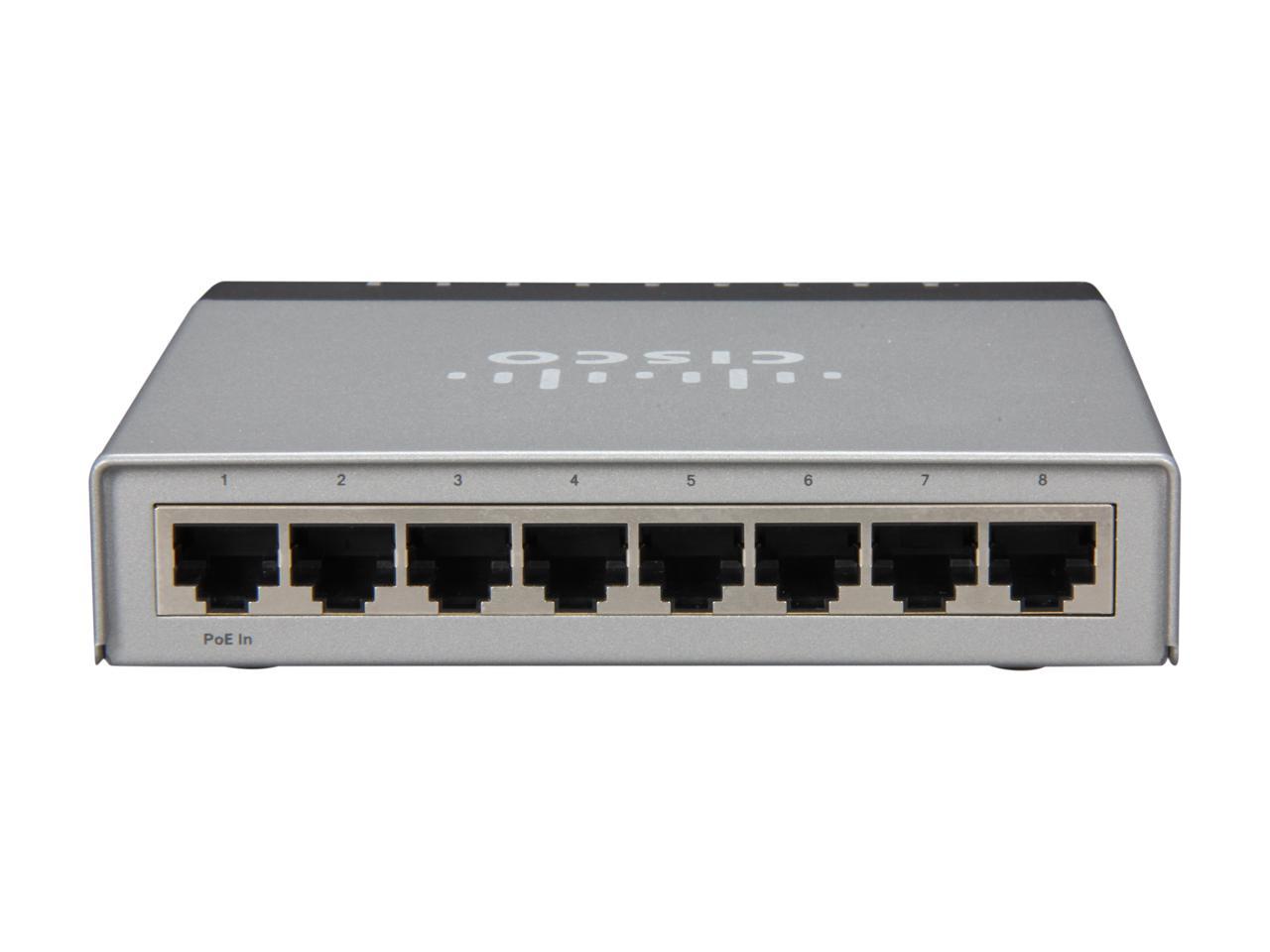 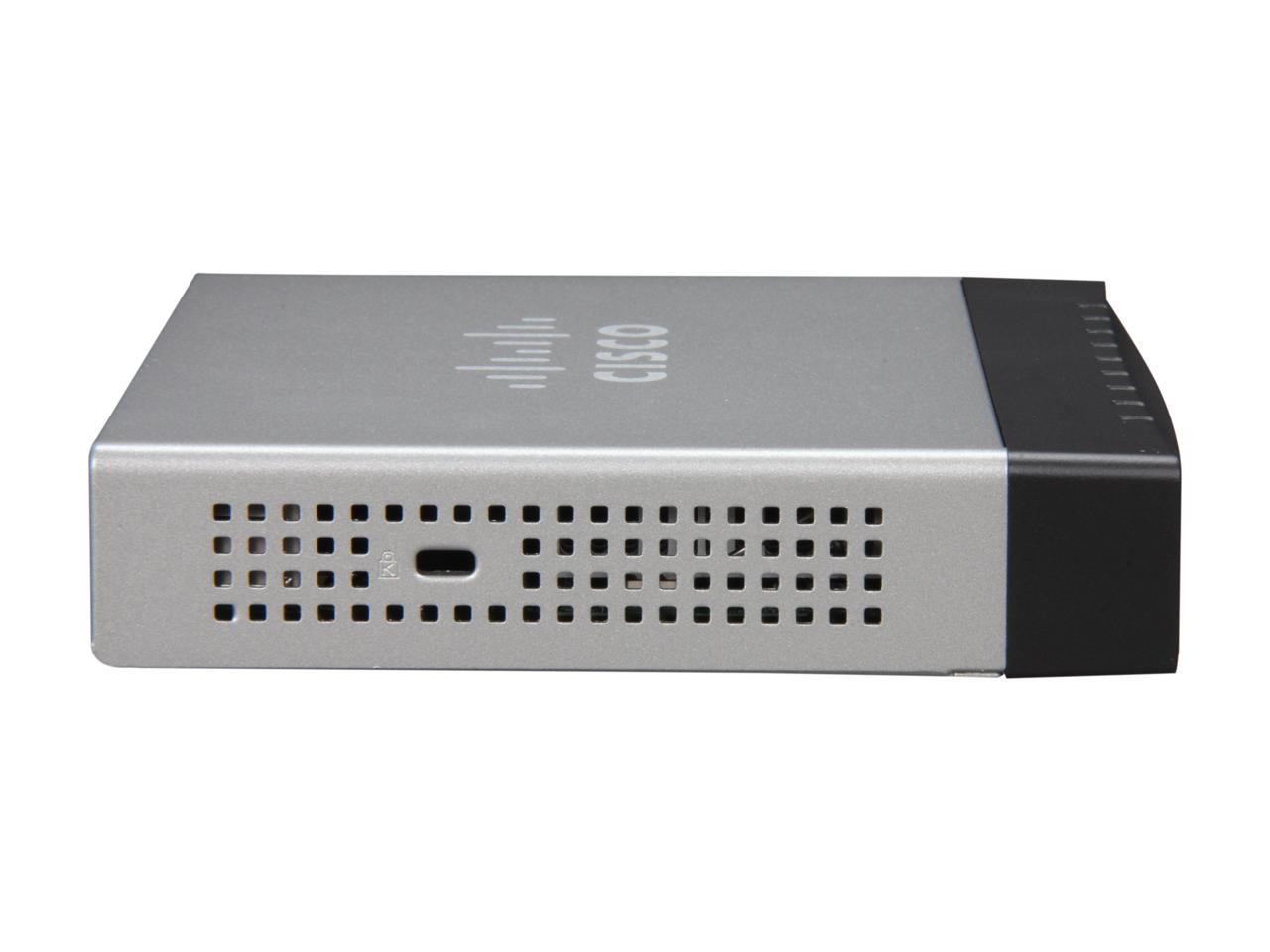 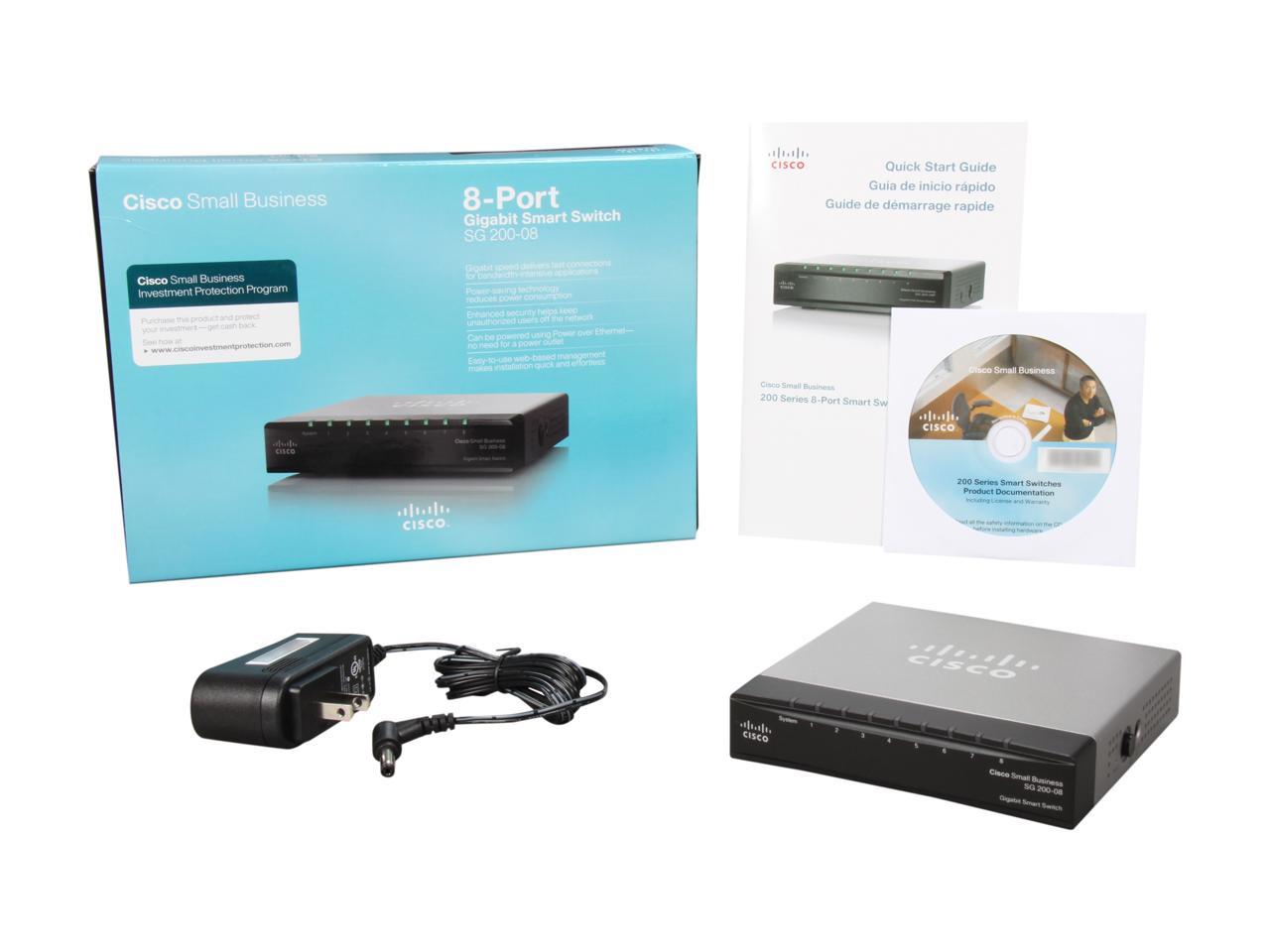 (29) Write a Review
In stock.
Ships from China.
Most customers receive within 5-32 days.
Overview
Specs
Reviews
.

Pros: - 8-port gig switch with trunking and other decent layer 2 options made by Cisco for a very reasonable price. - Seems fairly reliable, as expected from Cisco. - Can optionally power itself from another switch using power over ethernet, eliminating a power cable in a media center setup, for instance. (Does not provide POE from that port, even when plugged in, though. There's another model that does that.) - Uses a fairly small amount of power. - Supports LACP port-channels - Flexible uses, good features, and small: useful for many things.

Cons: - No CLI, SSH, Telnet, or otherwise (I'm told the SB300 series has one, no idea how close it is to IOS, though) - Oddities in the interface: To set up a trunk with multiple vlans, you have to 1. create the vlans, 2. add them to the trunk (normal so far) then 3. go to a separate page to allow the vlans on the trunk (?) That also has to be done for untagged (access) This results in behavior similar to what is available on a Cisco IOS switch, but sometimes what you have to do is very counterintuitive and obscure, and the documentation doesn't really help much at all. - CDP not really working. From the documentation and the configuration options it looks like this can support voice and data vlans for Cisco phones, and thus is must use CDP in that case, but if you connect it to an IOS based switch, you won't see it as a neighbor, nor see that switch as a neighbor from it. It appears to have some other sort of possibly non-proprietary discovery protocol as an option.

Overall Review: I bought two of these and a third one that was the same except it provided POE on four ports (from another seller that had it slightly cheaper at the time) This was part of a project to run ethernet cable to various parts of my house. I installed the POE switch in my office near my router and modem and installed these switches in my media center and my wife's office. Thus far, they've worked brilliantly running off of POE from the main switch. My day job is as a network engineer, I have about 6 years experience in that, a CCNP and CCNP-Voice, among other certifications, and am working on my CCIE NOTE: These switches are not suitable for a CCIE or other certification lab. They do not use IOS, NexusOS, or anything else that will help you in any way on those exams, because the "small business" line interface is entirely different.

Cons: Web interface is easy to crash/hang, its slower than others, switch needs reset every two weeks or so under heavy traffic situations.

Overall Review: I had purchased two of these and they both are not as fast or stable as I had hoped. I hoped that going with cisco brand would make sure I had a stable setup and sadly that isn't how it worked out (although I have since read online their small business line is actually just rebranded consumer linksys gear..which I avoid). The switch has a worse ping than others I have used, it locks up once very week or two, and the web interface is buggy. I think in a low demand home setting these would be fine, but not in my network. I have a web server, 6 security cameras, a NAS, three uplinks that connect to about 8 computers, and three apple TVs that do netflix/hulu. Under these loads this switch doesn't stand up. I have since packed these in boxes and put them on a shelf (since its past the return date for refund) and moved on to HP Procurve. Its been about two months and I can say the Procurves are much better, so if your looking for a switch for a hard working network - look elsewhere.

Pros: Desktop Style (cable/ports in back, status LEDs on front bezel) Quite (no fans) No pre use setup required (ready to go out of the box)

Cons: The following caveats are acknowledged in release 1.0.7.4: Problem: The VLAN tag is not stripped for mirrored packets. Solution: None. This is a hardware limitation. Problem: When there are multiple port mirroring sessions, broadcast and multicast packets are mirrored twice on the first session, but are not mirrored on the second session. Solution: None. Problem: Users are unable to set the management VLAN via the web GUI and through CLI. Solution: Set the default VLAN instead of the management VLAN. For example, set VLAN 30 to default VLAN, VLAN Management>Default VLAN Setting>set Default VLAN to 30 > .Apply.

Pros: Nice switch for the money, alot of features you probaby won't use. Best item is the spanning-tree function is enabled by default. If a user loops a cable back into this switch and power cycles the switch you still have a switch that controls the broadcast/multicast storm that other brands don't control after the power cycle. Do that loop and power cycle the switch with some other brands and you get network meltdown from the broadcast/multicast storm.

Cons: While you can change the web browser interface port form port 80 I don't see any port 443/HTTPS function to encrypt your login. Probably not a big deal in most environments.

Overall Review: Did you know you can power the switch from PoE? Sweet!

Pros: Everything I've read lists these switches as having between 10Gbps and 16Gbps switching fabric...for 8 friggin Gb ports! LACP works flawlessly (so far), and this switch is /almost/ maintenance free once you set it up. I've been waiting quite a while for a cheap small-port managed switch like this.

Cons: HTTP interface only, it seems. I may have to research this more online.

Overall Review: I'm using this for LACP to a home Solaris-based fileserver and at work for XCP/LACP between multiple systems. So far, quite good.

Pros: This switch is simply awesome. You will not fund a more featured pack switch for the money than this switch. For the reviewer that gave the switch 1 egg because it does not save the configuration did not understand that you have to hit the "Save" button on the top of the menu bar and then select "Copy Running Configuration" to "Startup Configuration". This switch interfaced flawlessly to my Cisco Enterprise switches and the VLAN capabilities worked great. I bought two of these for my dad and another two for myself. This will the switch of choice for my house.

Pros: Compact, so it works well sitting under the monitors at my desk. It's a smart switch so I can assign VLAN on a per-port basis right at my desk.

Cons: Not a fan of the external power supply but I understand what having an internal power supply would do to the overall size of the unit. Also, the 8-port model is limited to handling 16 VLANs while the other SG200 units are able to handle up to 256 VLANs.

Overall Review: As I work both internal and external IT support for my employer, having access to all of our VLANs at my desk can be a real time-saver. I'm feeding a VLAN trunk to my local port and carving off from there so I can have multiple devices on multiple VLANs right at my desk for troubleshooting or setup purposes.

Pros: I'm glad that a switch like this from Cisco is available,you don't have a lot of options in this port range that have managed/smart capabilities. Great performance out of the box,its sold as a small business device but is great for advanced home networking. Don't sell your devices short with the cheapest switch you can get. Your investment will pay off for a long while,especially with Cisco support.

Cons: I had to RMA my first one because it was unresponsive after a flash. I followed the directions to a T but with with flashing firmware on anything, its always a possibility. Cisco support was great and kept my ticket open in case I needed to RMA through them.

Overall Review: This is one of those investments that will yield a true upgrade in performance from your networked devices be it at home or a small office. I guess I'm turning into a bit of a Cisco fanboy but that's cool with me.