FREE SHIPPING
Sold by: Newegg
Shipped by Newegg
Newegg’s gift-wrap service is the ideal solution for making your gift special! Select your item as a gift, then add your message. Your gift will also be discreet with no prices being included on the packing slip.
Price Alert
Add To Wish ListFound on 572 wish lists 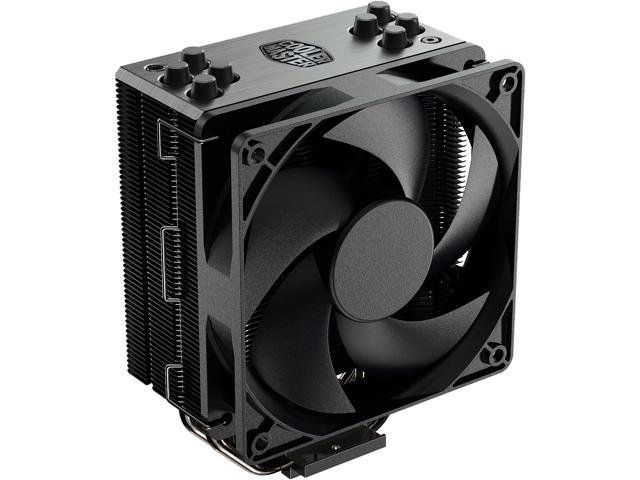 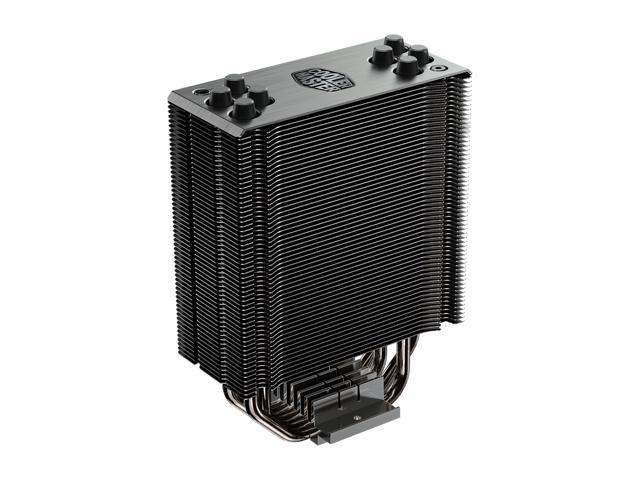 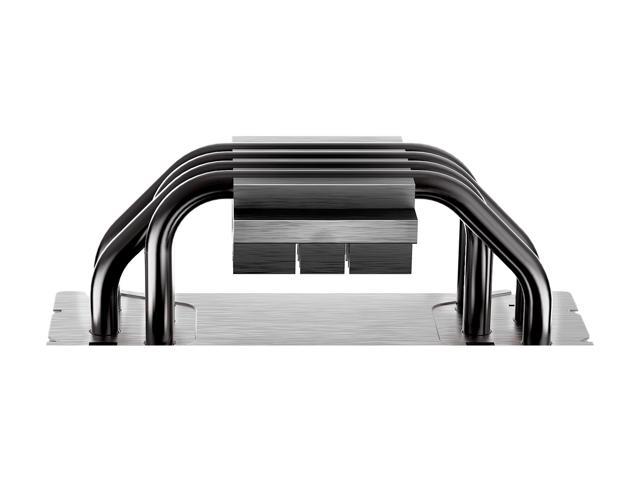 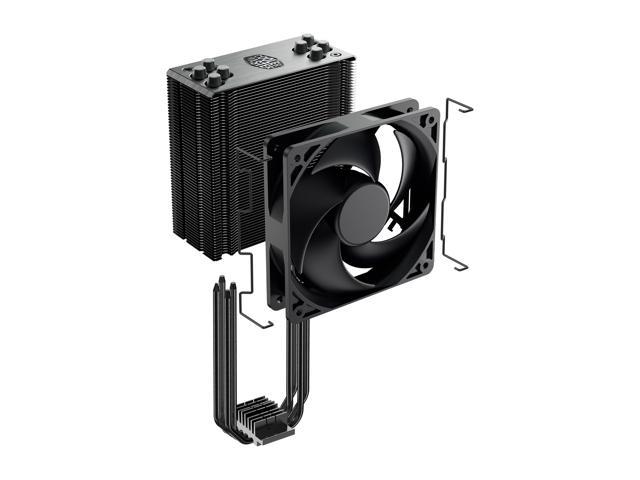 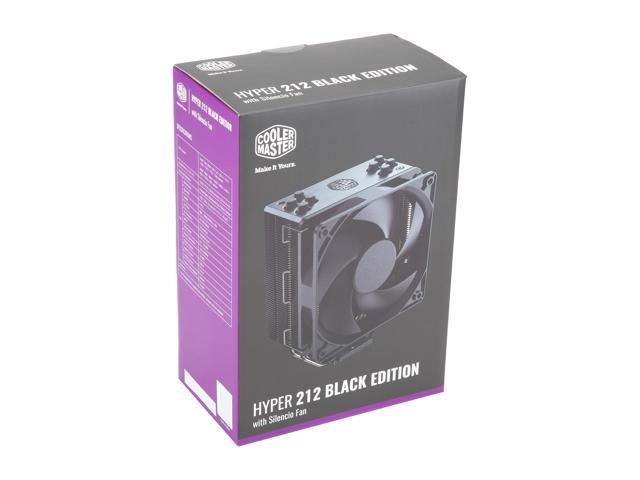 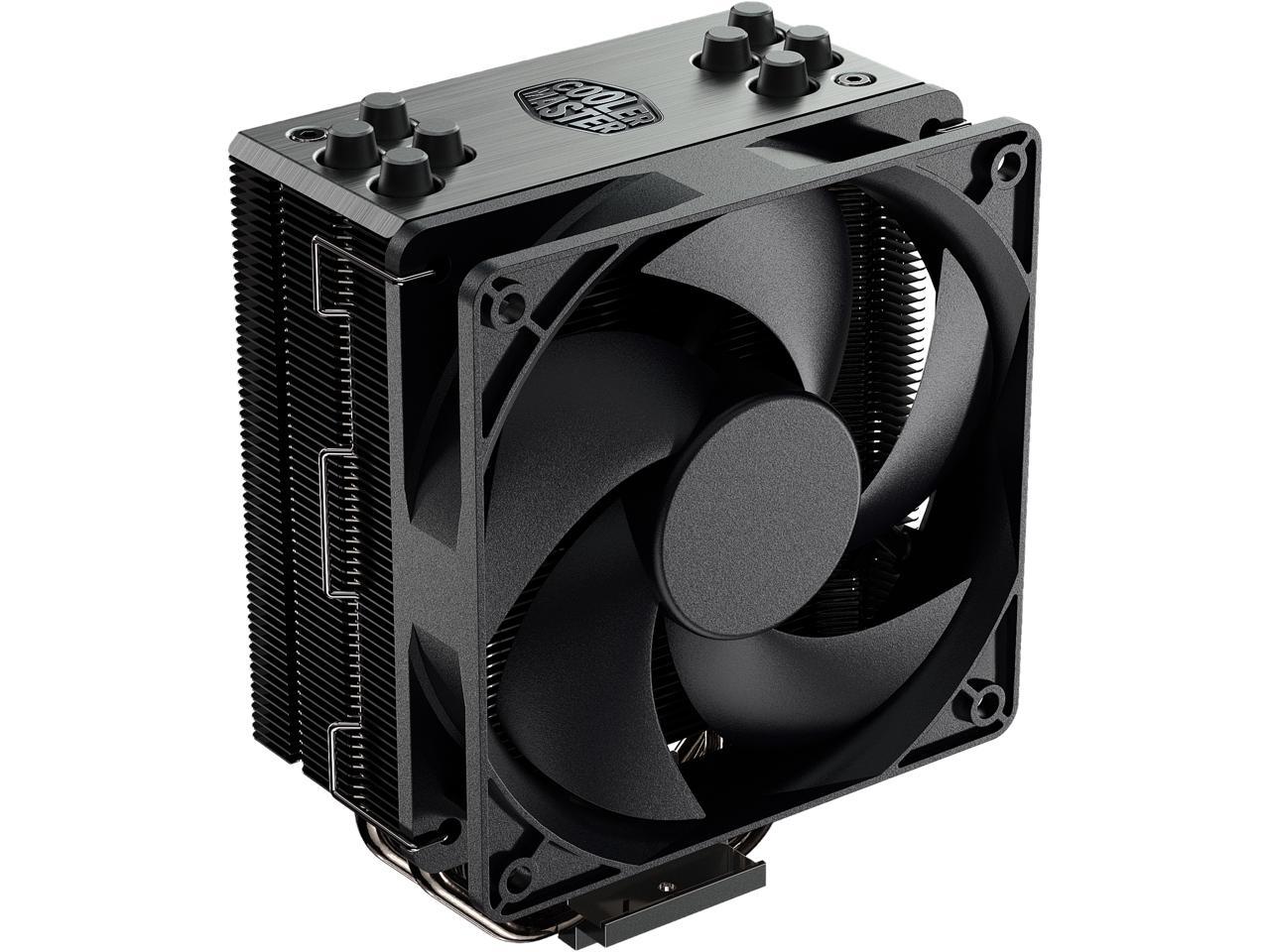 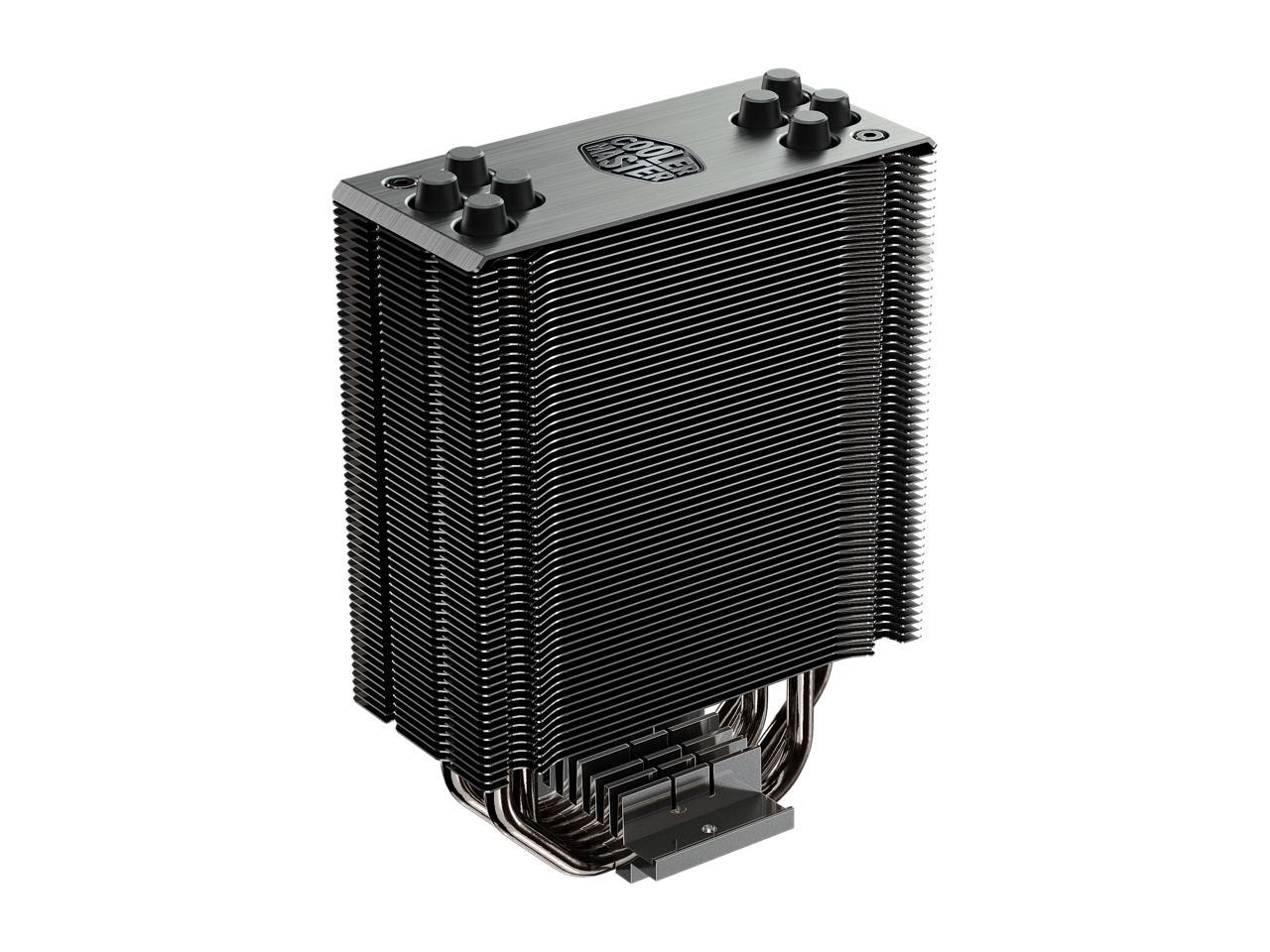 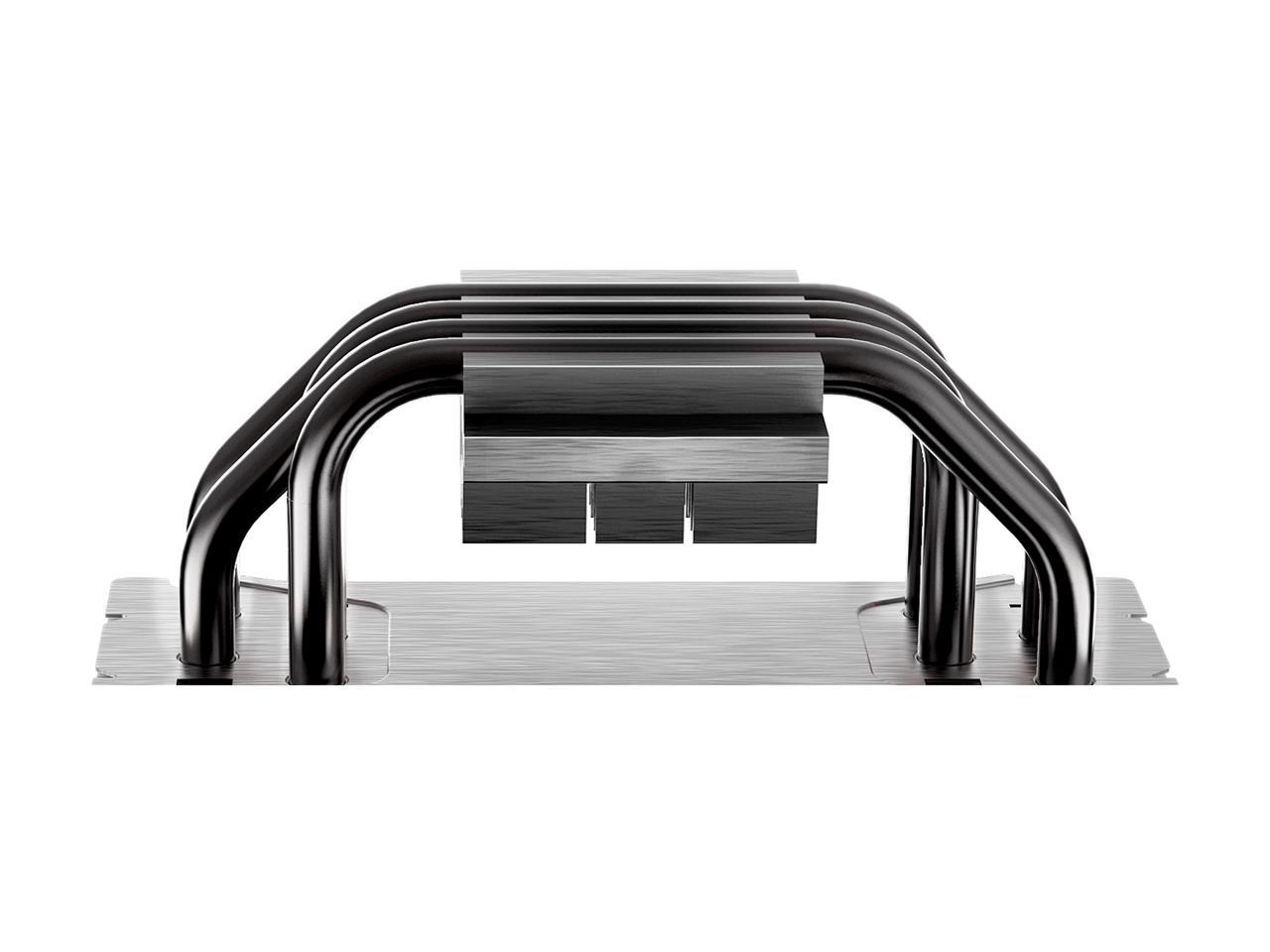 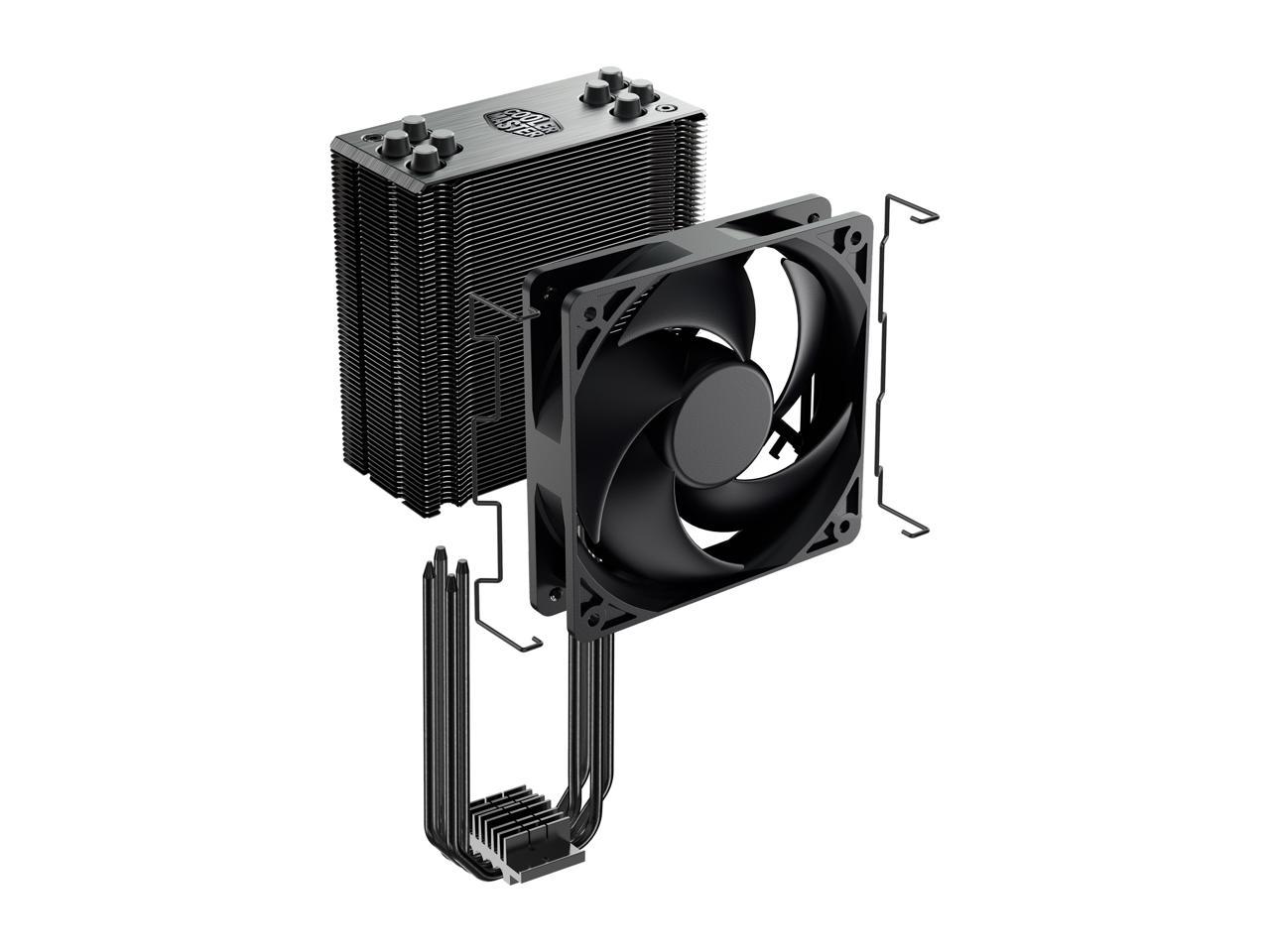 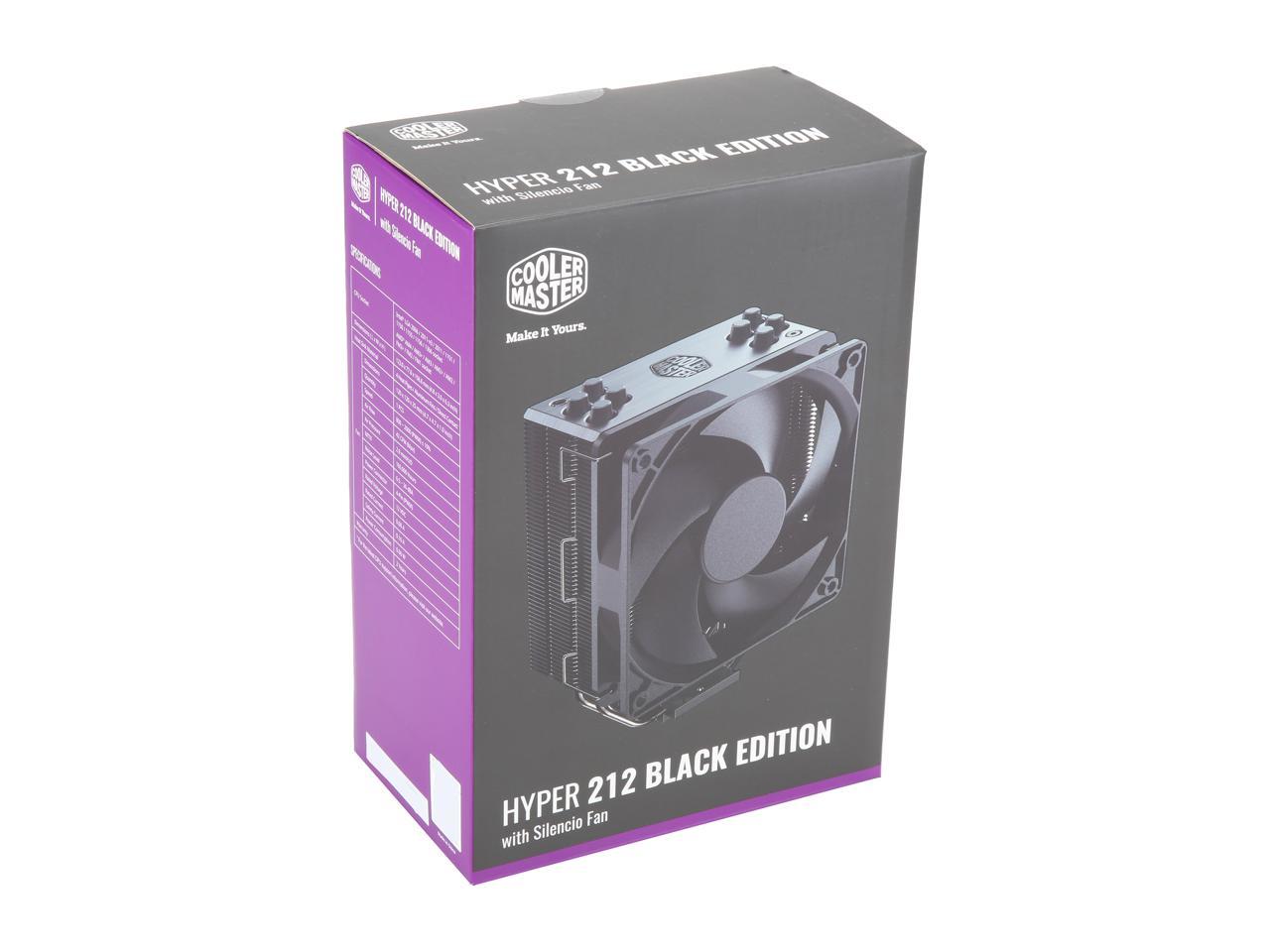 Give your CPU high-performance cooling and understated style with the Cooler Master Hyper 212 Black Edition CPU cooler. The stacked fin array and the nickel-plated, jet-black boost airflow and radiation cooling. It is whisper quiet in operating thanks to Silent Driver IC technology and helicopter-inspired blades. The four direct-contact heat pipes with Direct Contact Technology deliver optimized conductivity. It comes with a thermal paste syringe and a plastic seal cover the base. The low-key anodized gun-metal black with brushed aluminum on the top cover make this air cooler have a look that speaks volumes. PRECISE AIRFLOW WITH A NICKLE BLACK Driven by exclusive Silent Driver IC technology, overall system noise and power output will be reduced to a minimum. The design of the Hyper 212's fan blade is inspired by helicopters and is less prone to vibrations. You can add another fan with a simple push-pull. Heat will be dissipated faster and the temperature of CPU will drop faster.

The improved universal bracket design ensures easy and worry-free installation on all platforms.

Pros: Upgraded from stock Ryzen Wraith where temps hit 80C+ with moderate overclock of 4.0 on Ryzen 5 2600x Runs whisper quiet at overclock of 42.25 @max 65C in a NZXT 500i case. Good clearance on the glass. Sits right beside me and I can't hear it under load. Memory clearance for me was not a problem I only have to sticks of G Skill Flare x 3200-14 in a ROG Strix x470-F motherboard and should be fine with 4, not sure about bulky RGB it would be tight. Highly recommend. Oh and it looks classy!

Cons: remember to take the sticker off the bottom of block when installing, although it was a snap to install 2nd time round :)

Pros: Excellent cooling performance. I am running a Ryzen 2600 overclocked to 4 GHz @ 1.275V. While running Handbrake (all 6 cores pushed to 100%) with the original Wraith Stealth cooler, the CPU temp would reach 90C in under 10 mins, and the computer would shut down. With this cooler, I ran Handbrake for about 4.5 hours at a stretch and the temp generally stayed at 63C and never went beyond 65C.

Overall Review: Be careful that the AMD mounting brackets are not interchangeable even though they look straight. At first I attached the left bracket to the right side of the cooler and the right bracket to the left side, and spent 40 mins trying to figure out why the four screws won't line up with the backing plate. Look at the included instructions carefully to figure out which bracket goes on which side. Once I figured out the mistake, installation was easy.

Cons: haven't ran into any yet

Overall Review: I've been building computers since 2005 and have been in IT a few years before then. I've done quite a number of heat sink installs and this one is the easiest yet. On my AMD Ryzen socked AM4 install it's a solid and easy install, not wonky at all. You attach the bottom plate onto the motherboard first. Then lay the motherboard flat. Apply thermal compound, set the heat sink (without fan) on the CPU squarely, and then tighten. Install notes: When tightening the heat sink onto the CPU do so in crisscross fashion. Rotate each screw two rotations at a time starting top left 2 - bottom right 2 - top right 2 - bottom left 2. Repeat until the screws do not turn anymore. It might seem like you're going to smash the CPU but that won't happen. There are rings on the heat sink that prevent more tightening. You want that.

Pros: I've always gone overboard with my components, but I had used an older version of the Hyper 212 in a customers build many years ago and I remember being very impressed with the quality of the fan for such a low price. I decided to save some money and use the 212 in my new personal build, and honestly, it's just as good if not better than I remember. This is a great fan if you're not pushing your PC extremely high for benchmarking. This has kept my CPU at optimal temperatures through everything I've thrown at it.

Cons: Just be aware of the size of this fan before you purchase it, make sure the case you are using has enough clearance. Check the product descriptions for measurements and leave wiggle room.

Cons: Bracket to attach fans can be a bit finnicky, but once it's on there's no issue.

Overall Review: Great if you don't feel like dealing with watercooling but don't want to completely cheap out.

Pros: Good Heatsink, does the job. No light, perfect for no RGB mobo and case without TG.

Cons: I wish they changed these little metal thing that hold the fan to the heatsink. Go with the RGB model if you prefer, but for a silent PC case without TG, it works flawlessly.

Overall Review: Easy to install, comes with all you need.

3 out of 3 people found this review helpful. Did you?
Jason P.
Ownership: 1 week to 1 month
Verified Owner
Continues the tradition of the 212 family of coolers being one of the best values out there over OEM cooler12/6/2020 5:06:32 PM

Pros: - Black matters more and more with most builds that have glass panels so this is big, especially where it is not a massive overcharge like Noctua. - Continues to include the option of adding a second fan - Cut peak load temps by 8 C on a 3600XT vs the OEM HSF - Much improved mounting mechanism from original 212 designs

Cons: The only con is that it can't be any better without affecting the price.

Overall Review: I have been using 212 series coolers for a long time and they are a go to for me. I don't seek max overclocks and don't need insane bling or to shave only one more degree C off peak load temps. Cooler Master has done an excellent job at maintaining this family of coolers at an excellent price and engineering to value aspect. I hope this continues for a very long time into the future.