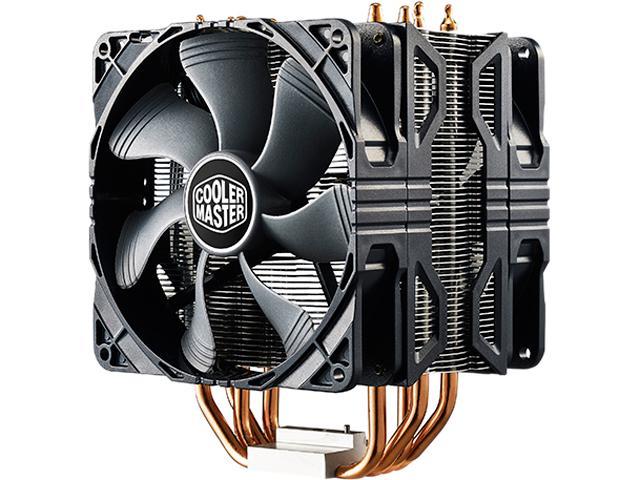 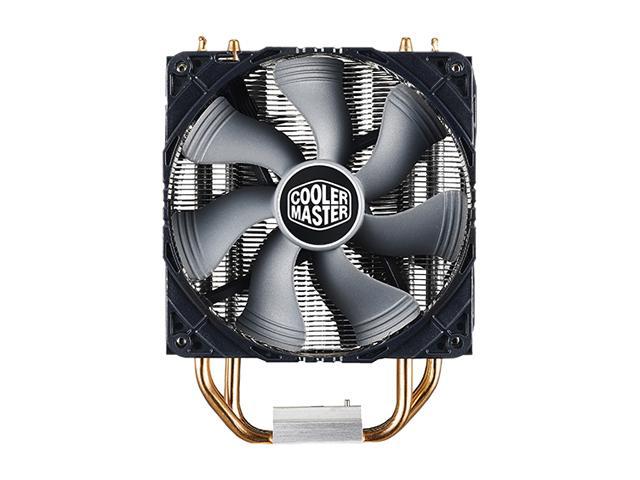 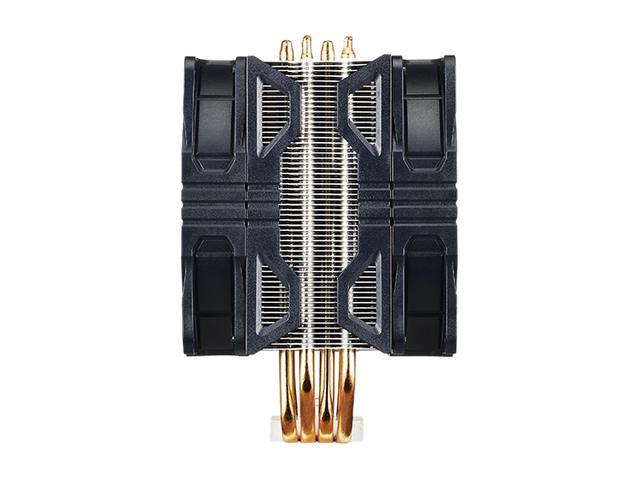 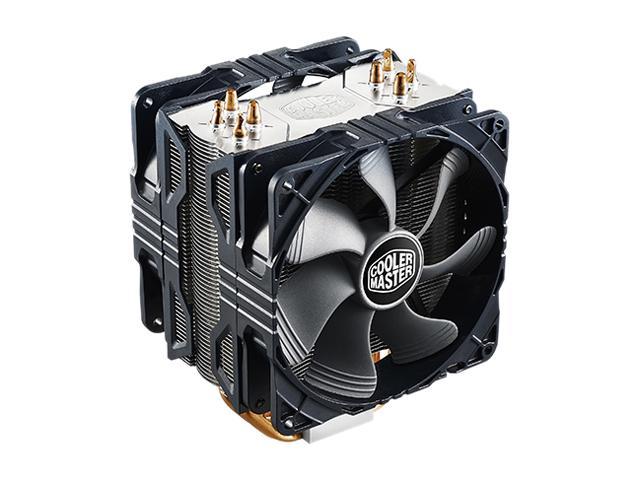 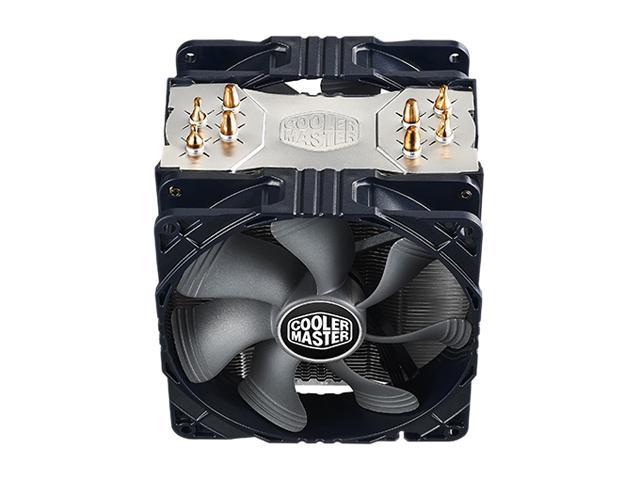 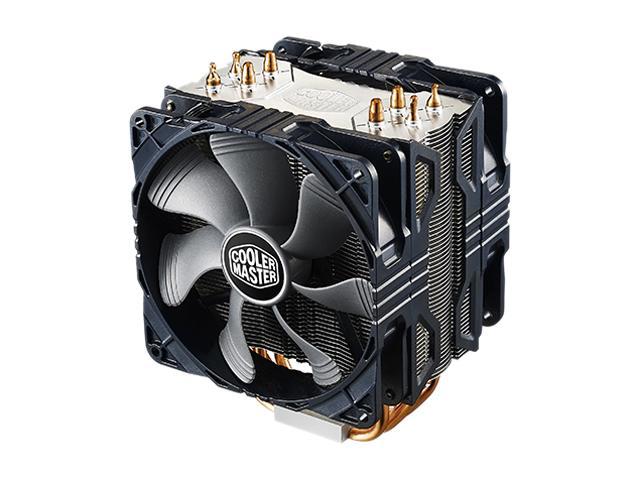 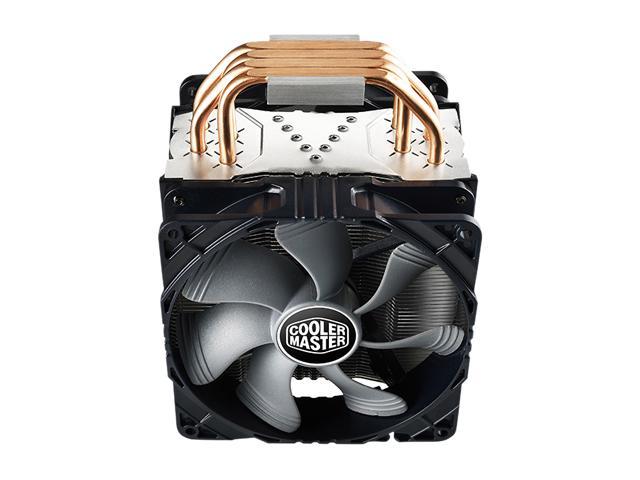 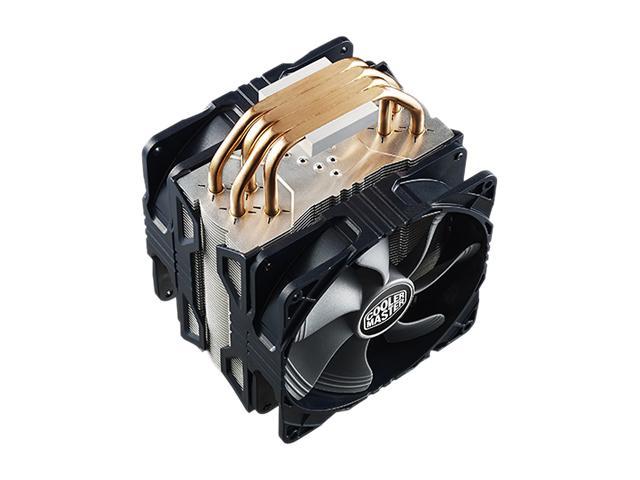 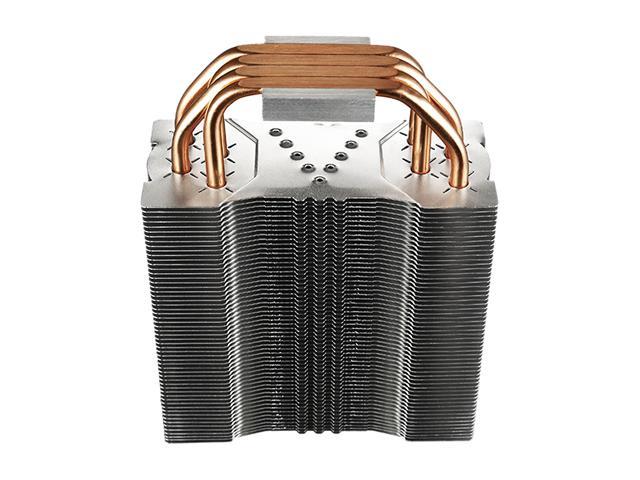 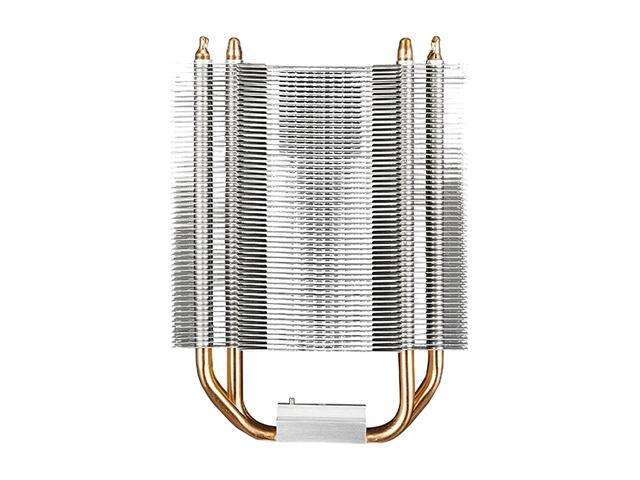 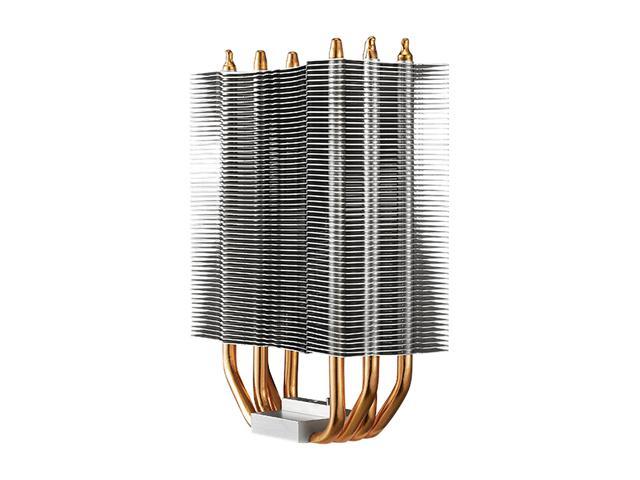 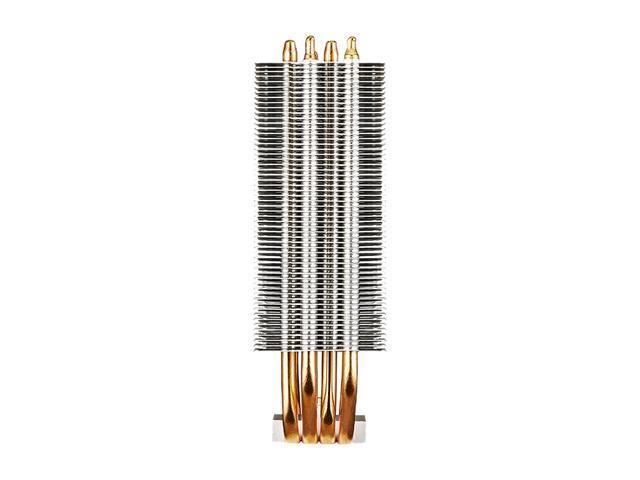 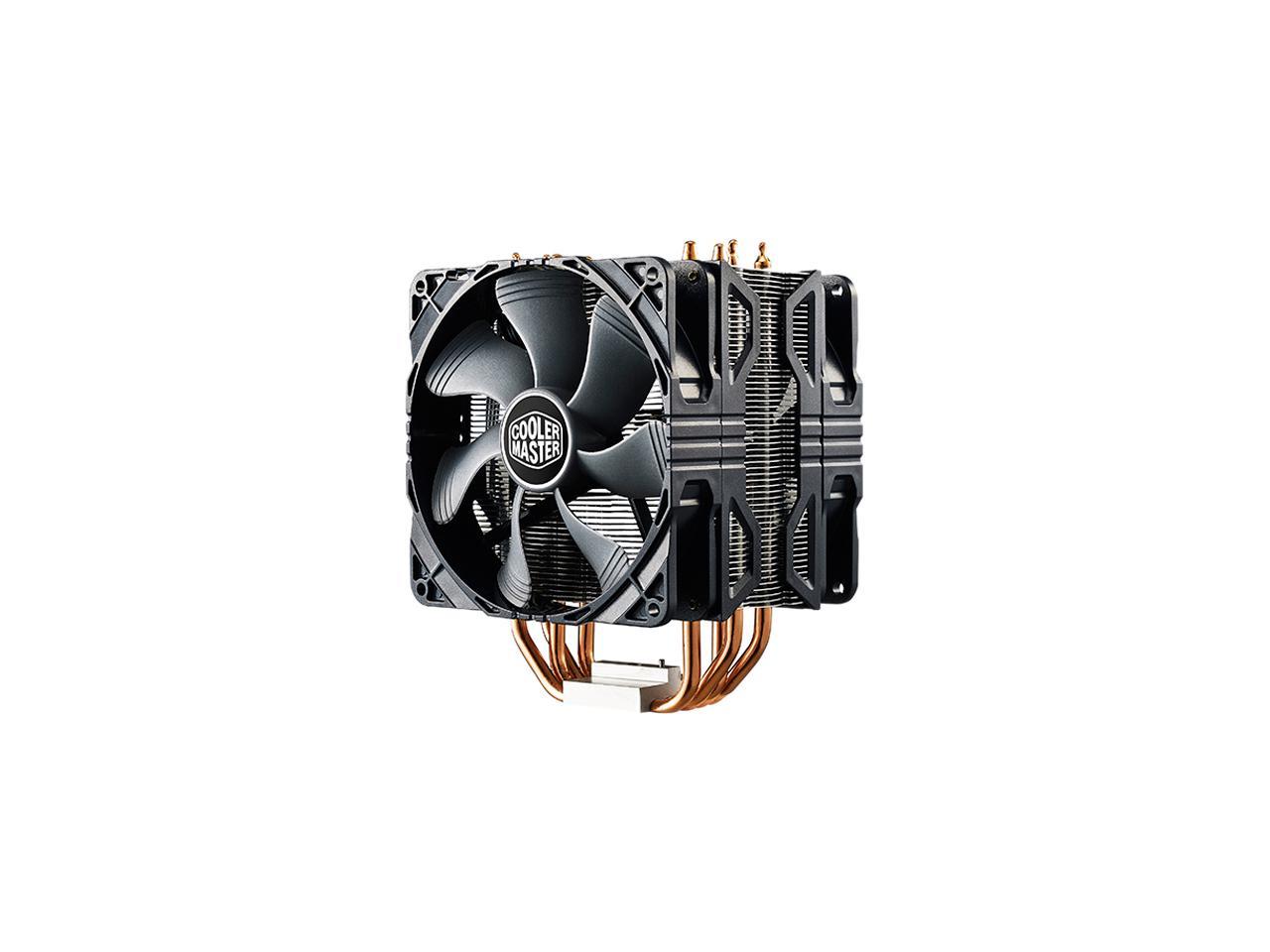 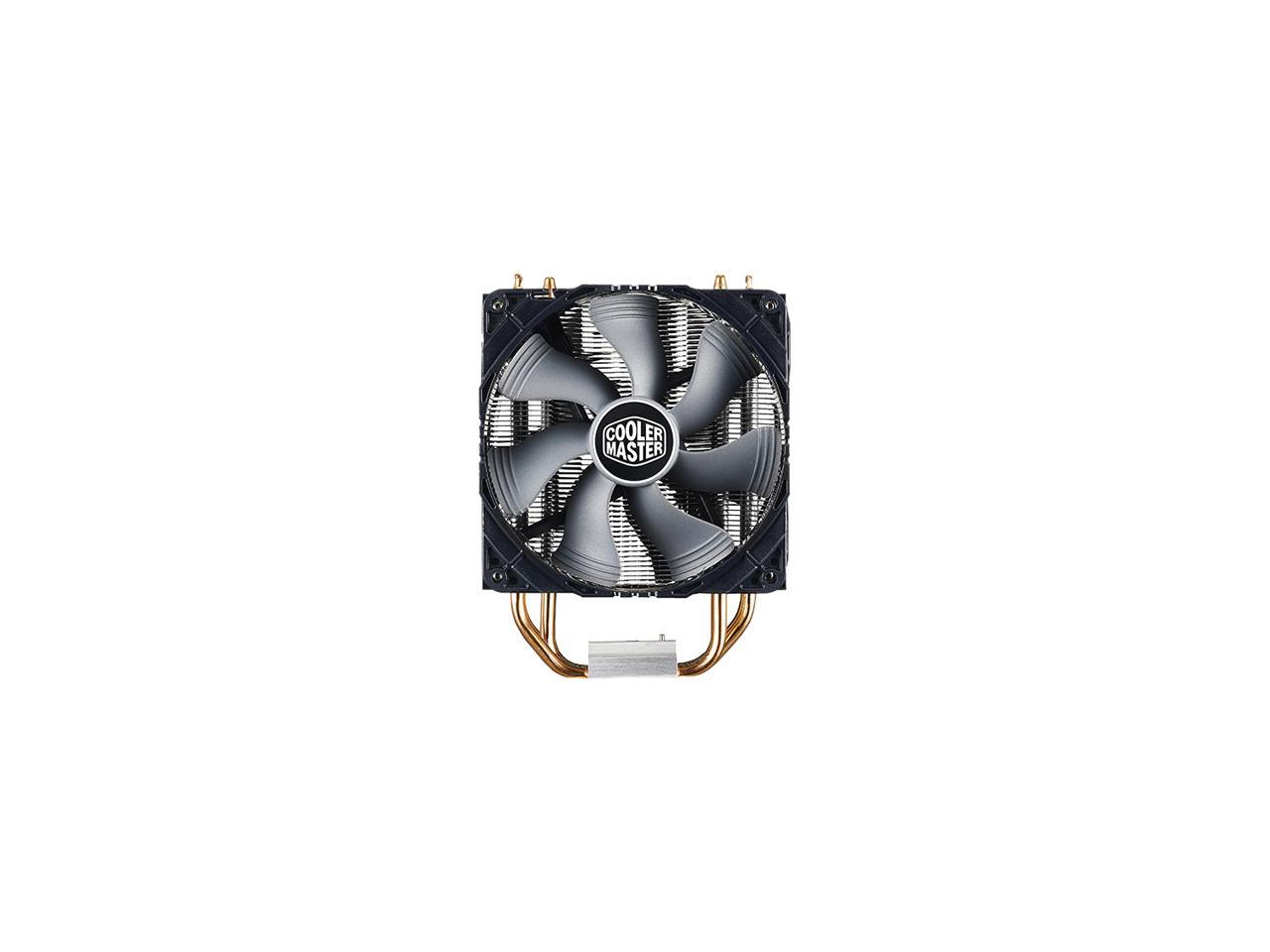 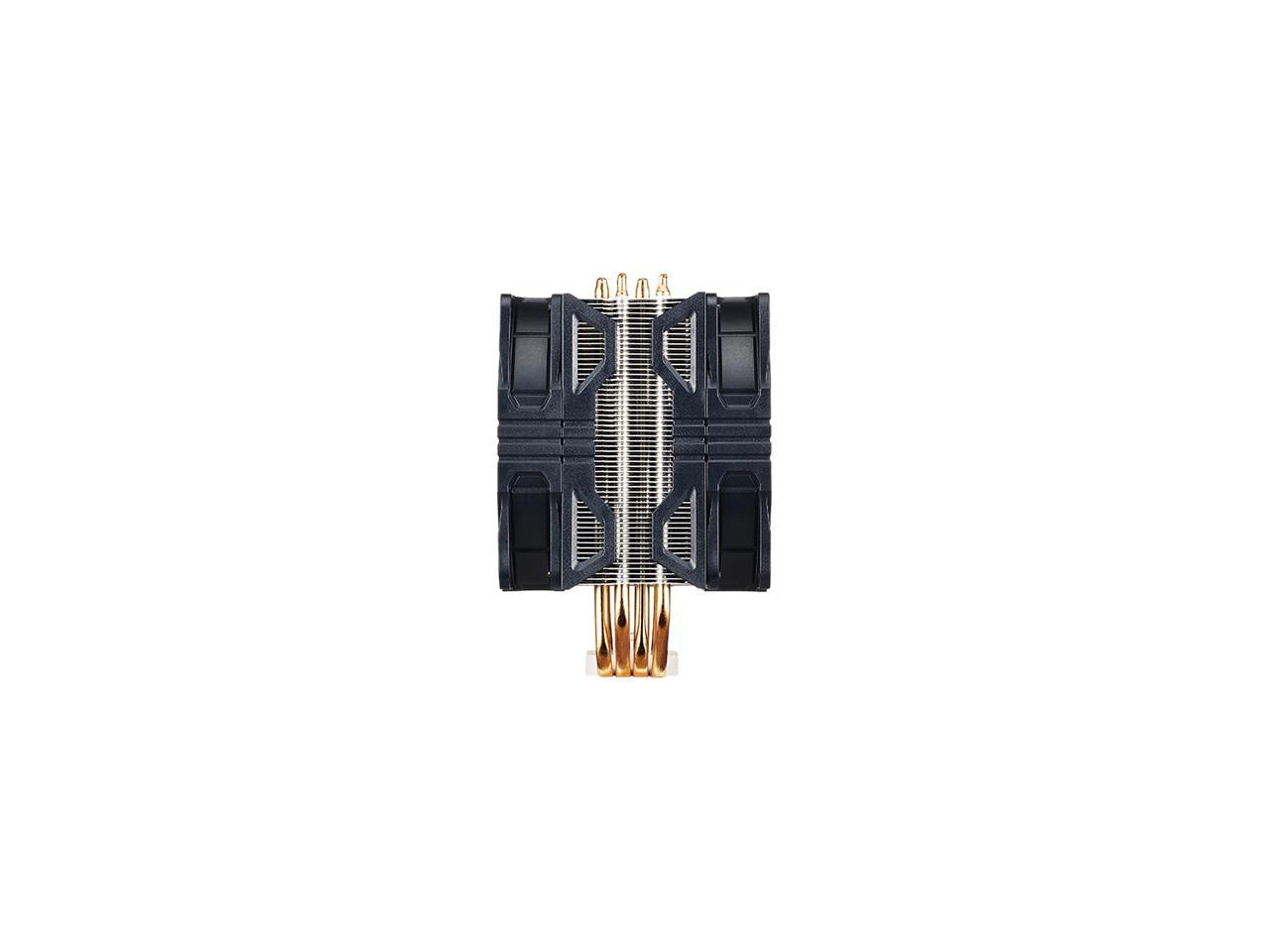 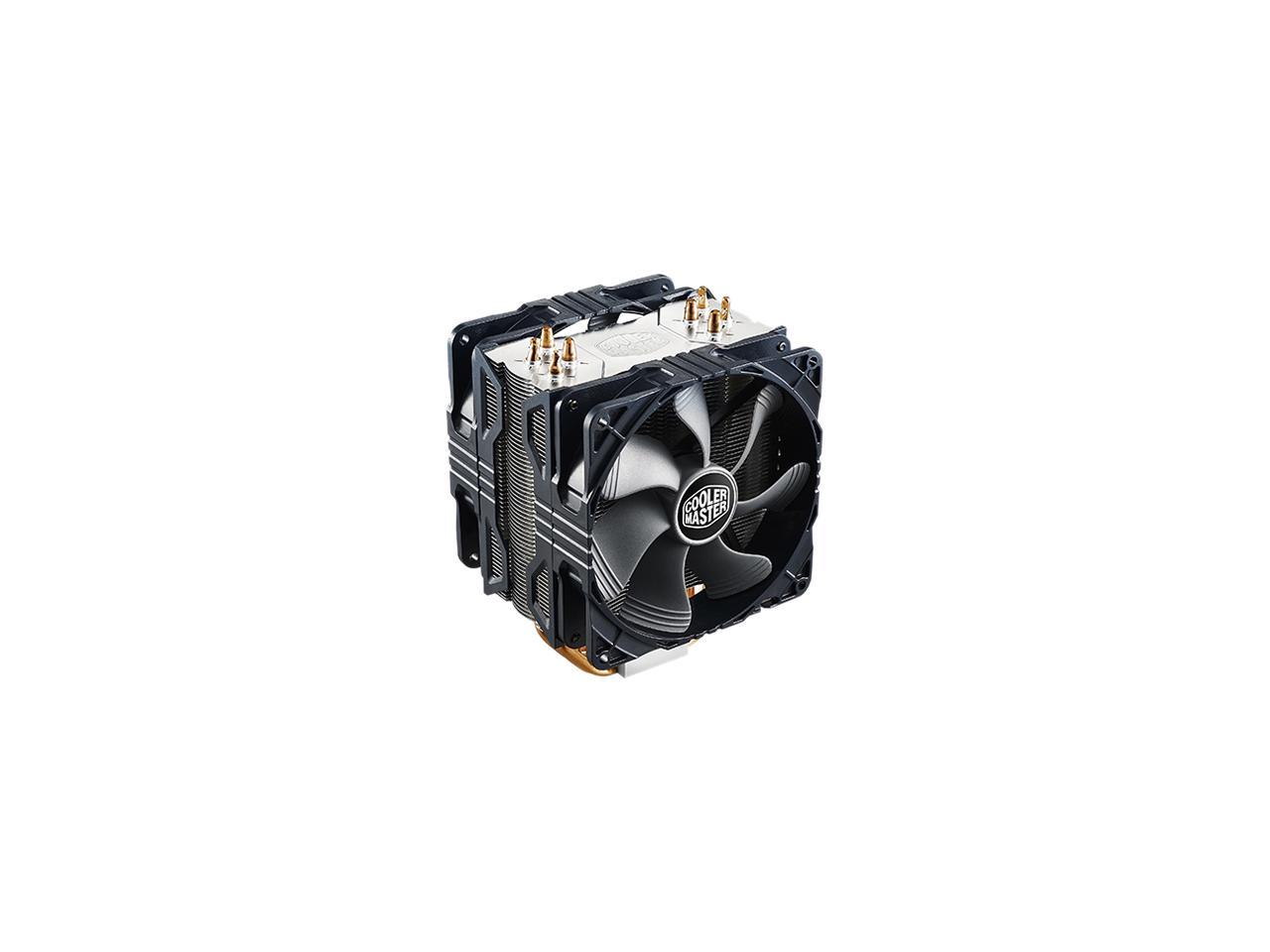 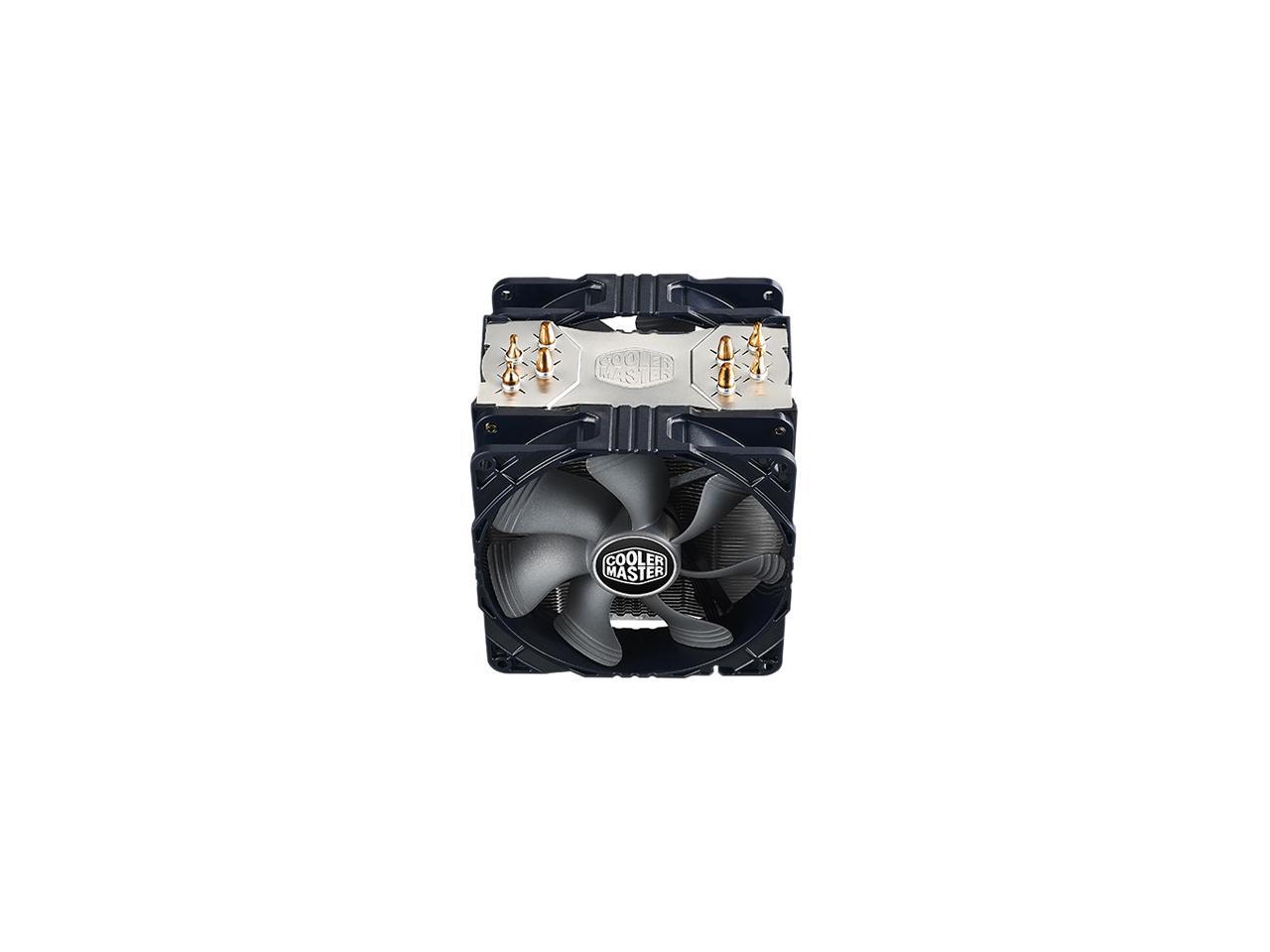 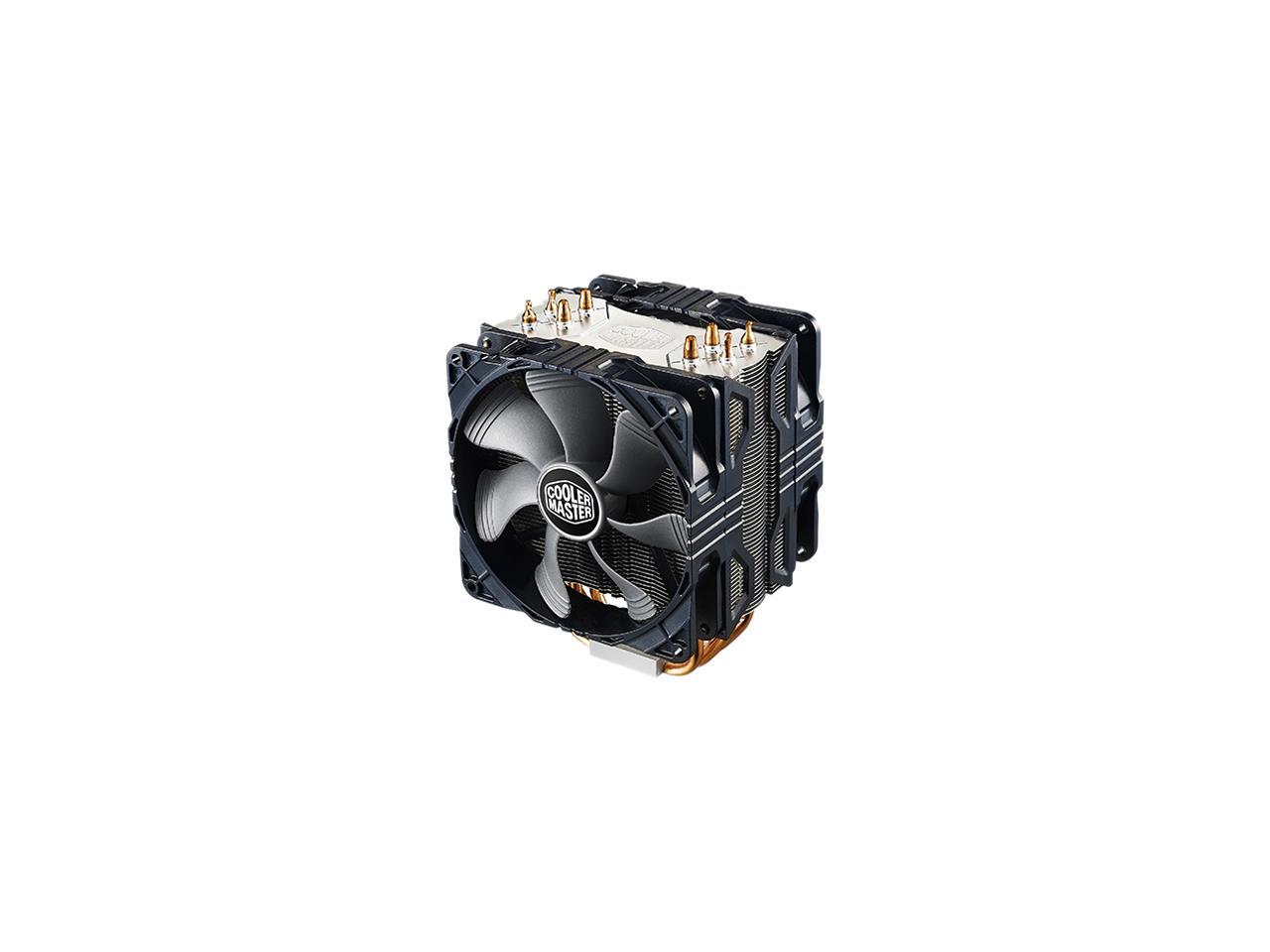 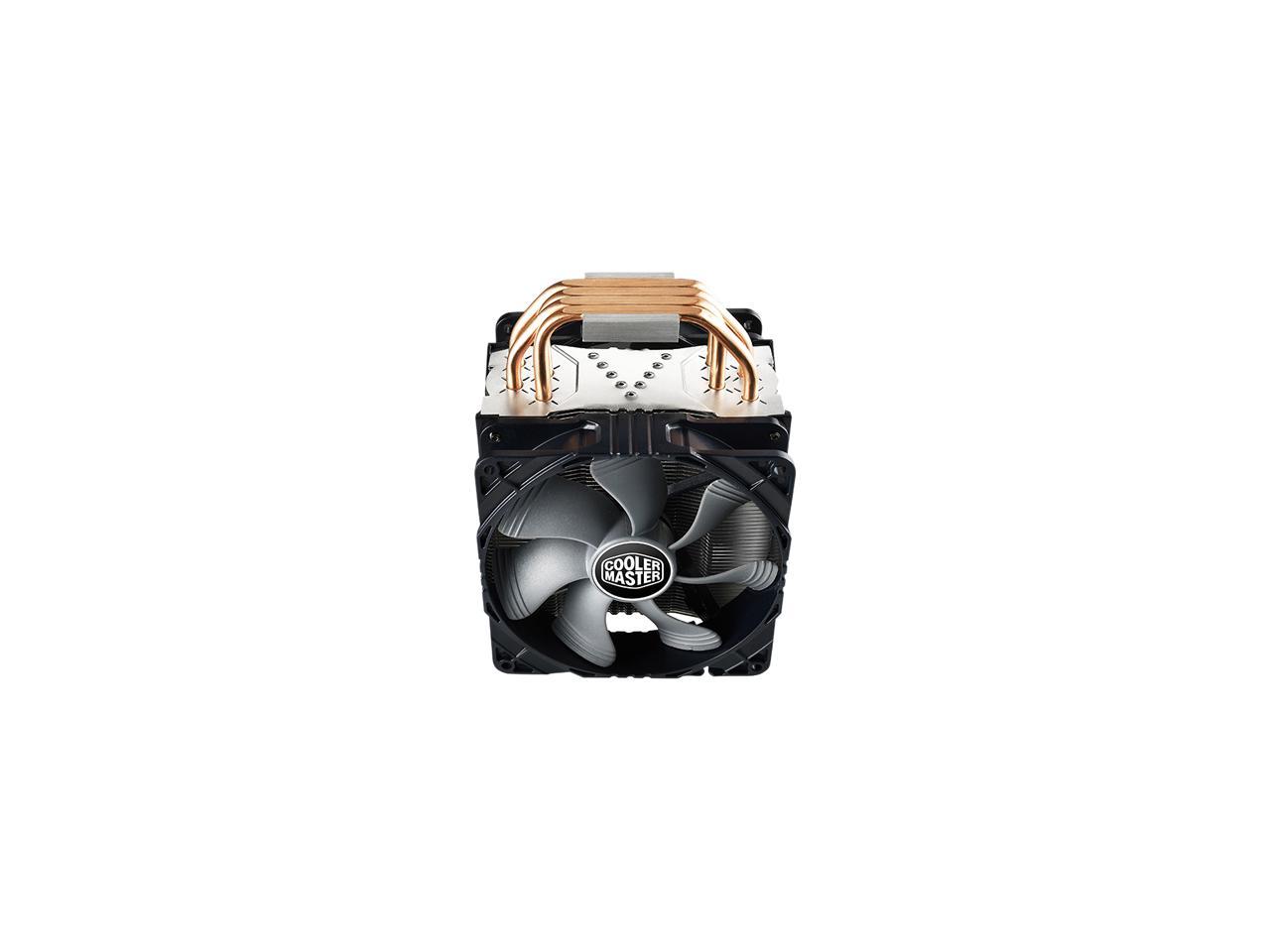 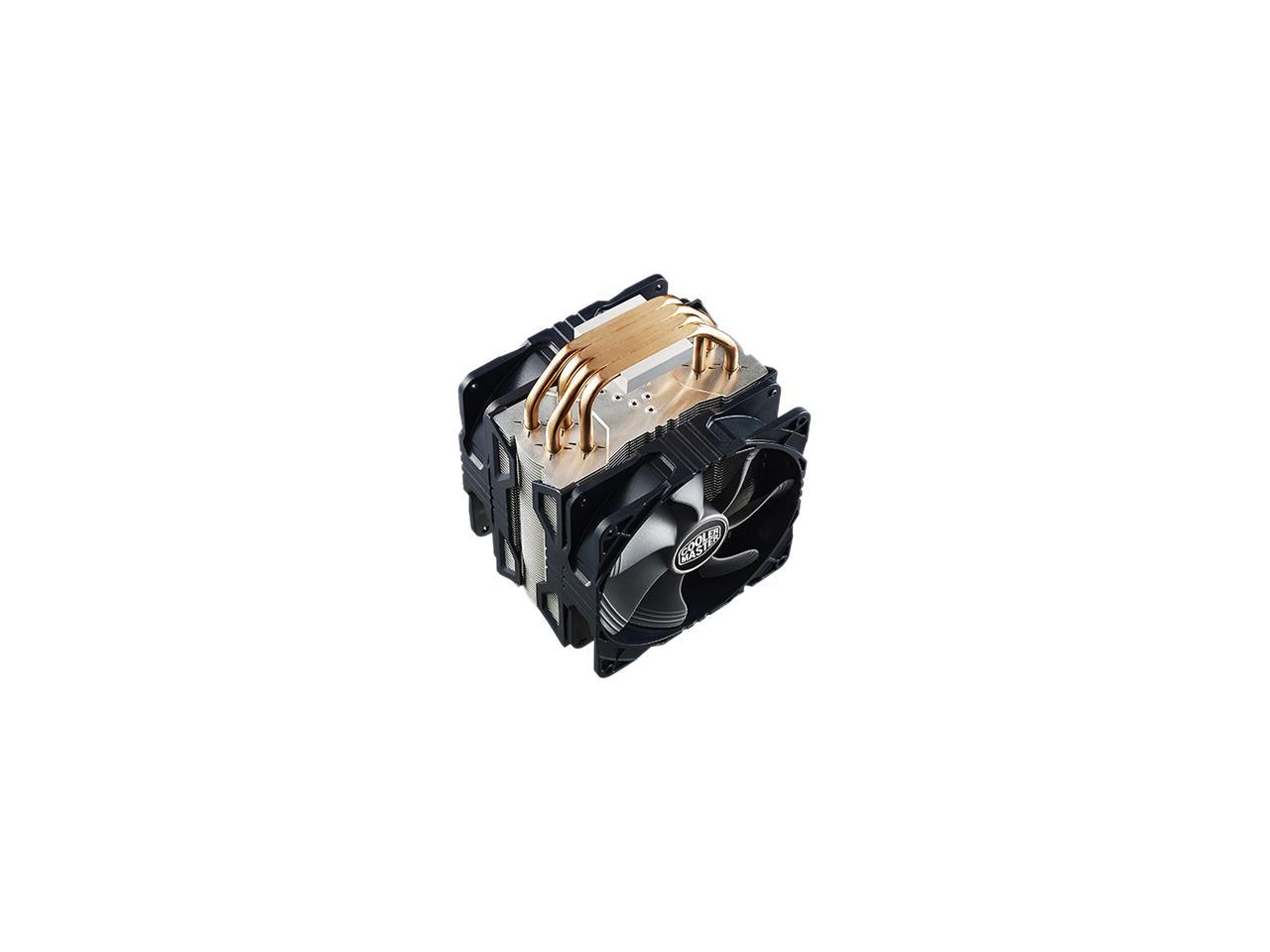 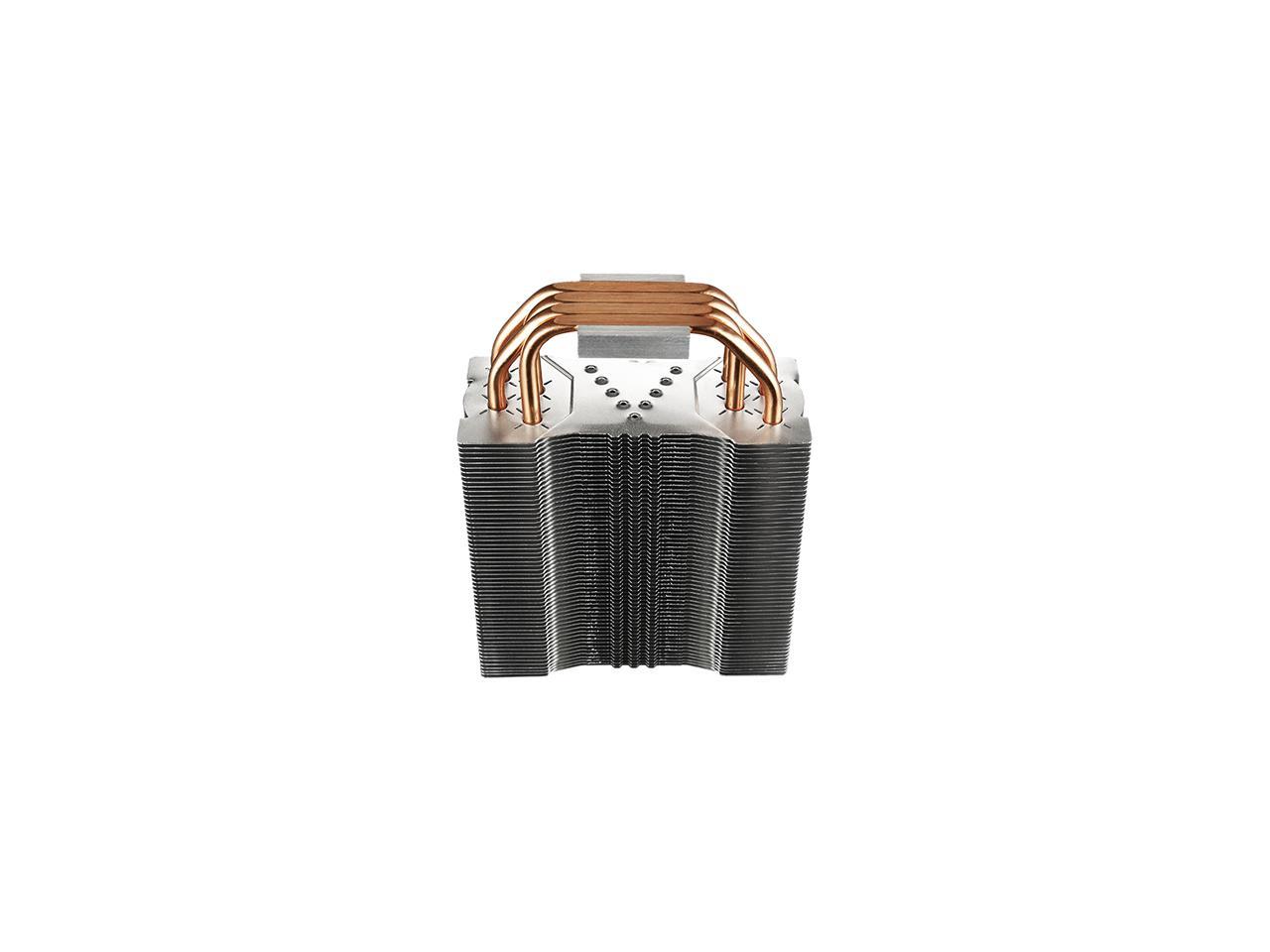 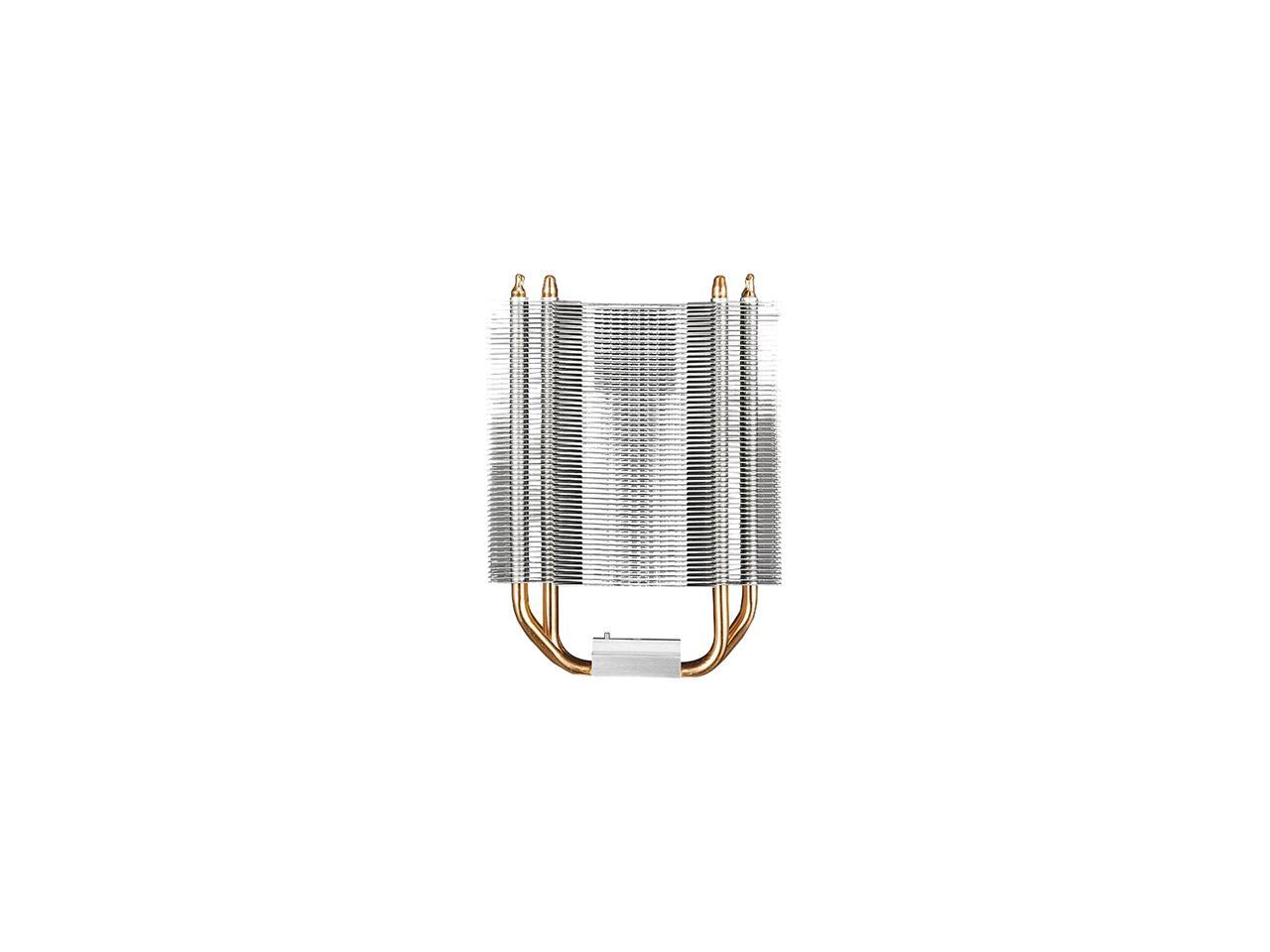 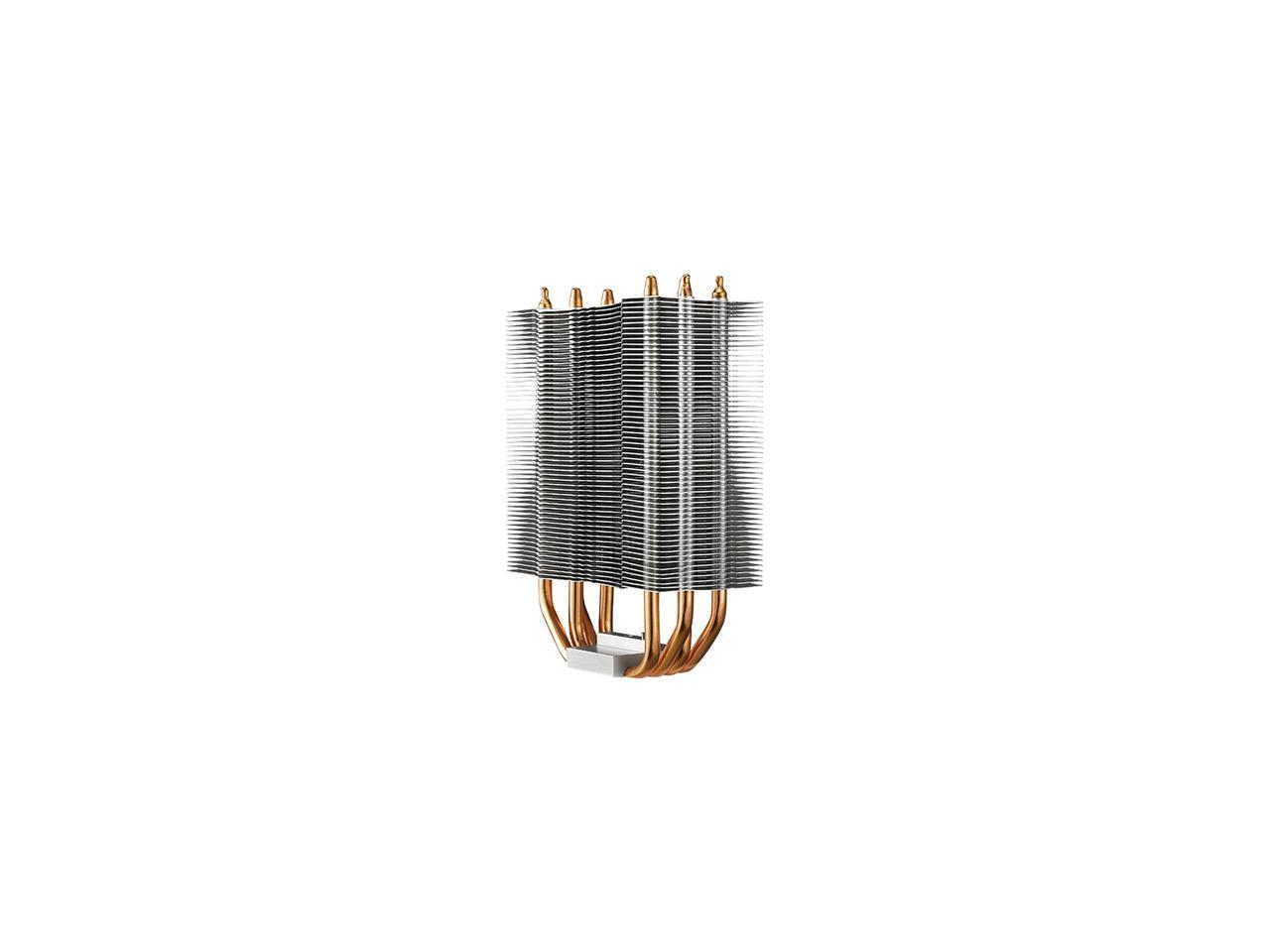 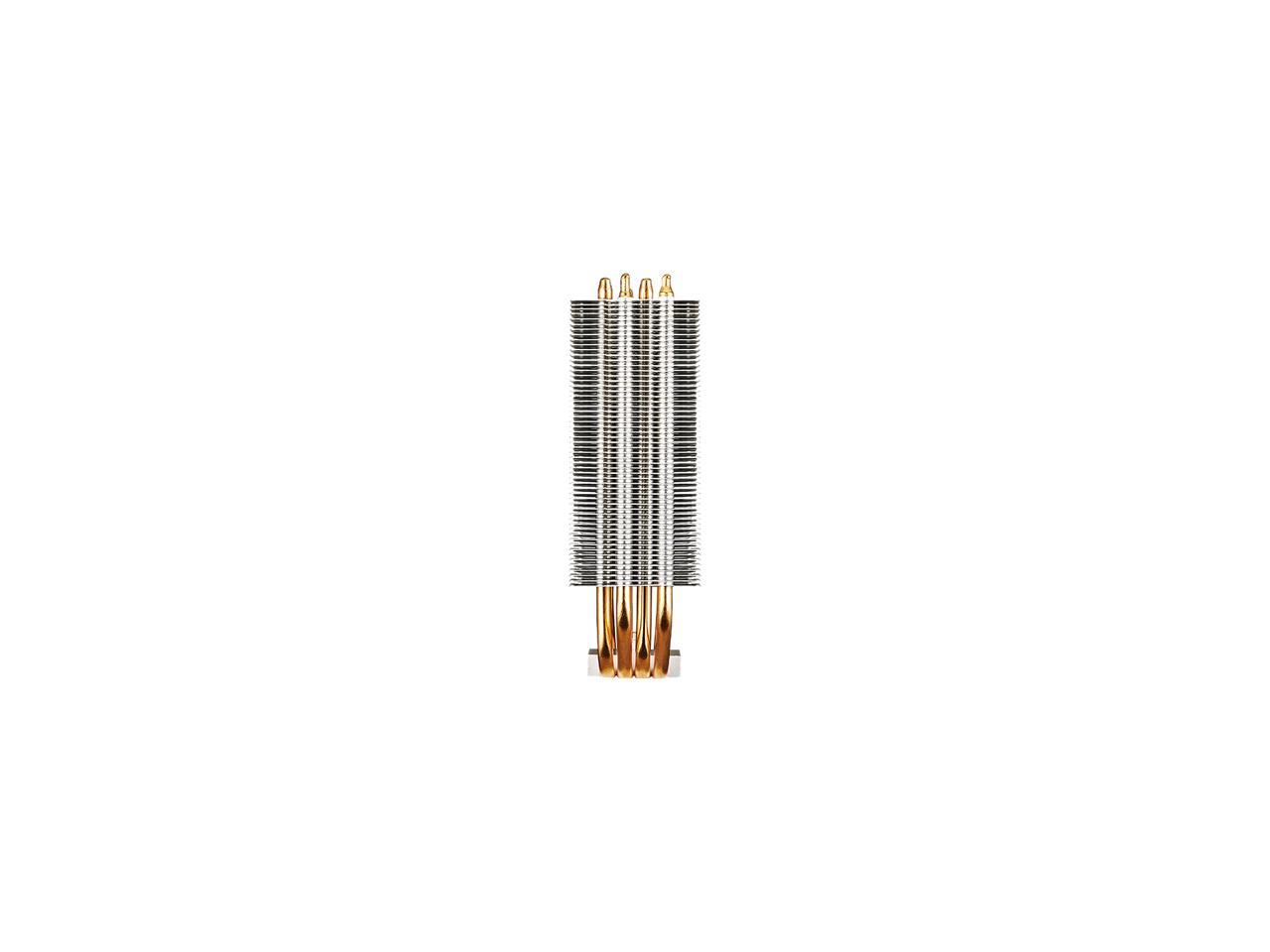 A new addition to the widely acclaimed Hyper 212 series

Keep your system in top condition and maximize the life of your CPU with the performance-improved CoolerMaster Hyper 212X CPU Cooler with Dual 120mm PWM Fan. The aluminum fin array adopts X-Vents and Air-Guide to better expel heat away. Up to four direct touch heatpipes pass through the aluminum fin array to create a comprehensive cooling system. Thanks to the fans with redesigned blades, more airflow will be created to cool the heatsink without producing more noise. And the fans’ 4th generation bearing ensures an incredible lifecycle. With Cooler Master’s brand-new smart fan engine, the fan will stop once blocked to ensure exceptional protection. Plus, it supports both Intel and AMD CPU sockets for great compatibility and is easy to install.

Positioned in a 45-degree angle and surrounding the heatpipe, each fin-blade features X-shaped vents that create areas of high and low air pressure, resulting in several controlled vortices. These small and chaotic turbulences produce strong gusts that reduce overall airflow but improve airflow where it matters the most – next to the heatpipes. Funnel shaped aluminum fins and a series of perforated dimples guide the airflow towards the heatpipes. The specially designed X-Vents act similar to tiny airplane wings and prevent deadspots behind and between heatpipes. The combination of these patented technologies results in a notably higher airflow over the heatpipes and the adjacent fin area, ultimately reducing CPU temperatures. Aluminum Fin Array with Tunnel Effect layout creates micro vortices that boost the airflow and circulate it around the heatpipes. The POM bearing is coated with Polyoxymethylene material. This type of material is ideal for precision parts requiring high stiffness and provides consistently lower friction levels than traditional bearings. Self-lubricating, lower friction, and dustproof protection, ensures the average lifetime is pushed up to an incredible 160,000 hours. Thanks to its versatile all-in-one mounting solution, installation is easy and fast.

Pros: It works well as a cooler.

Cons: This thing is a nightmare to get, on and a nightmare to get off, thanks to one of the laziest bracket designs ever. My old Hyper 212 Evo worked great. You want to change the brackets? Screw the ones for your socket to the cooler and then attach it to the motherboard. This monstrosity? Question whether you have the adjustable bracket set right, carefully balance it over the top of the cooler, because it doesn't actually screw to the cooler, thread it into a set of posts that are already installed on the board and then realize in horror that those posts come out with the cooler half the time you need to unscrew the screws from them. Scratch your head at a cooler that floats atop your CPU on a coat of thermal paste, that you can actually move around after its been "secured". If you ever need to take it off without completely bread-boarding your build, it's a nightmare and a half.

Overall Review: This thing is such a nightmare to work with that, if I end up having to RMA this CPU or board because of the problems I'm having, I'm eating the $40 and buying literally anything else. I'm as diehard a Hyper 212 fan as there is, I would gladly go back to it if they fixed the bracket and was ready to put Hyper 212 coolers on every system I build until they stop making them, but this version is never going back onto another PC if I have to take it off again. They cut corners so they could make one bracket, and it's literally so bad I'd rather throw it in a box in my closet. That bracket is a nightmare, the the cooler still manages to function well despite its complete inadequacy is nothing short of stupendous.

11 out of 12 people found this review helpful. Did you?
Manufacturer Response:
Hello Jonathan, To the best of my knowledge, the Hyper 212 EVO always used the X bracket mounting solution(the new black edition models attach the bracket directly to the heatsink though). The X brackets was meant to accommodate a wide range of CPU sockets, and the X bracket design was chosen to fill this requirement. You wouldn't need to attempt to balance the bracket during installation. You would align the bracket accordingly, and hand tighten each screw in a criss cross pattern. You would tighten them in the same pattern. Although you can force the heatsink to move, it is actually secured to the processor and is making contact with the CPU surface(As you mentioned it is cooling the processor). If it is sliding around on a coat of thermal paste, you are likely using way too much thermal paste. CM-PNguyen
Henk J.
Ownership: 1 week to 1 month
Verified Owner
Nice product, but...8/6/2018 5:46:38 AM

Cons: The instructions give new meaning to the words terse and minimal (hence the four egg rating). Really should be expanded.

Pros: 5 stars for the cooling, 3 for the mount. Keeps things very cool, the second fan is pointless, one is more than enough. I'll keep the second for a spare.

Cons: The mount is horrible. I wasn't able to torque this down tight enough to keep the thing from moving around, which might be me or might be the mount. Not removing it to find out.

Overall Review: I would likely not buy this again due to the mount.

Cons: Install. Install was probably the worst I have ever done. Used many cool masters and none of them have been this bad. The Cooler is huge and the bracket system is absolute garbage, why they went in this direction is beyond me, but if their products are this way from now on I will not be buying again. My Noctua I bought at the same time was way more straight forward and easy to install. This thing is also HUGE, like it fit in my MID Tower by about 1/2 of an inch when I close up the side panels.

Overall Review: Will not purchase again, and I am debating on just buying another Noctua and tossing this one.

Pros: Looks like a good cooler, should work as expected once I get the bracket for AM4 sockets. Edit: After returning my first one and ordering a new one, I received a complete package. My first one was missing the entire white box that contains the screws, thermal paste, and the black mounting brackets for the second fan that is suppose to come with the rest of the heat sink. Newegg even threw in free 2 day shipping for having to reorder. I'm using this to hopefully keep my Ryzen 5 1600X cool. I'll be sure to update this with temperatures once I get it going. I am upgrading from an AMD A10 7850k that I had Oced to 4Ghz. I was using a Cooler Master Hyper D92 dual fan heat sink on that chip and it was cool all the time. I'm hoping to see similar performance with this bigger cooler.

Cons: Edit: Second fan mounting brackets were confusing at first to install. At first I tried putting the brackets on the wrong side, making it impossible to screw them down. Something to keep in mind when assembling the second fan.

Overall Review: Edit: This looks like a nice cooler and I expect it to perform well once I get the AM4 mounting kit from Cooler Master. It should be noted that I ordered that piece May 4th - it's expected to be here Friday. That's too long of a wait Cooler Master! I paid 7 bucks to ship your "free" AM4 conversion kit to have to wait nearly ten days? That's pretty bad.

Cons: Not the easiest install but it's miles ahead of the stock cooler.

Overall Review: I don't know if this cooler can be beat for the money.

Pros: holds up to a 4.8GHz Clock on a 7700K with temps never exceeding low 70's under full loading @ 4.8 Direct Contact heat-pipes handle just about anything ive thrown at it so far.

Cons: CM needs to do better on lapping the contact surfaces to a more precise finish so end users are not stuck with having to do it themselves.

Pros: -Brought my cooling from 80C Degress C to 40, Literally halved my temps hahah -Thought my fans were off they were that quite

Cons: Had to remove the mother board to install wasn't an issue, just a few screws